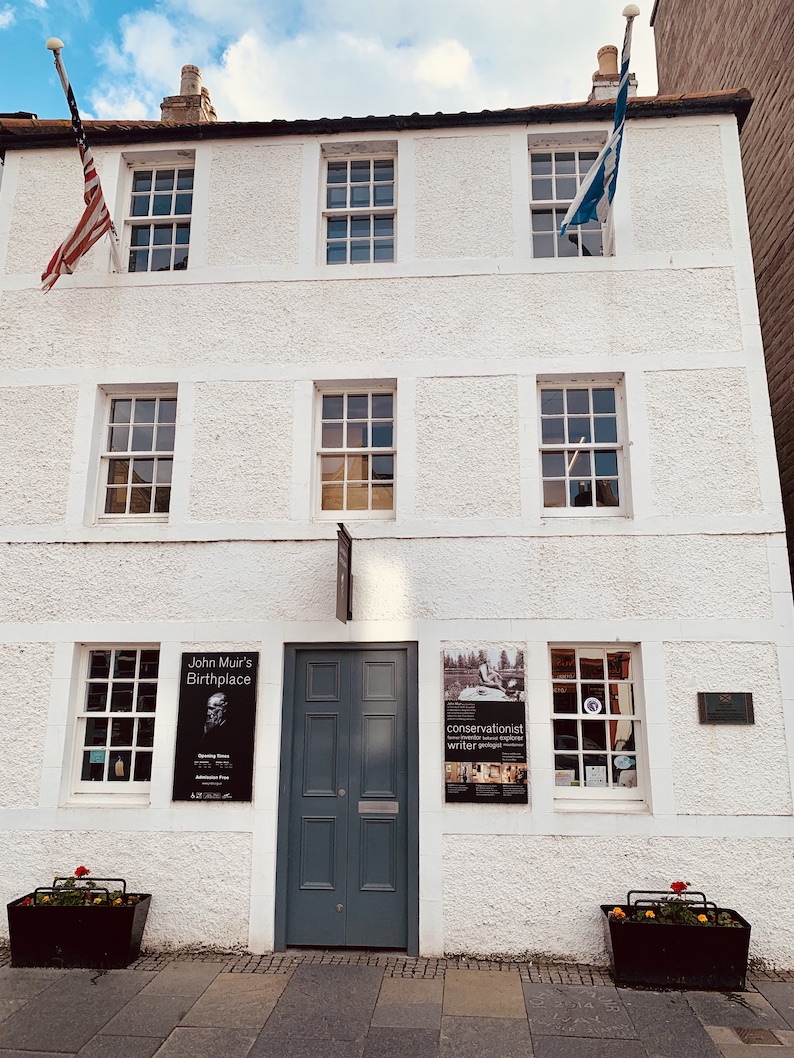 May 2019. You simply cannot escape John Muir in the Scottish town of Dunbar. After all, there’s a statue of him out on the High Street. You’ll also find a giant bear sculpture, located near the Spot Roundabout, which symbolises the great man’s travels through America.

Furthermore, one of his quotes is engraved into the stone floor of the newly restored Dunbar Battery. However, the full story on this fascinating man comes right here at John Muir’s Birthplace. 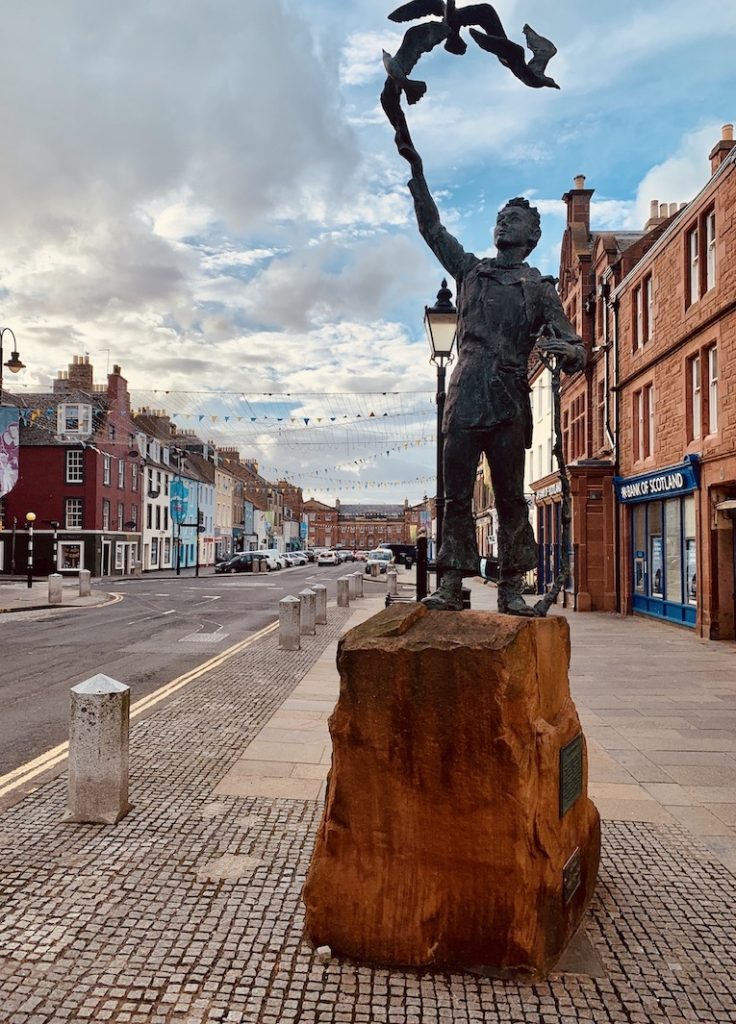 Situated on Dunbar High Street, right across from his statue, John Muir’s Birthplace is a museum dedicated to his life and work as a naturalist, environmentalist, philosopher, writer and inventor. 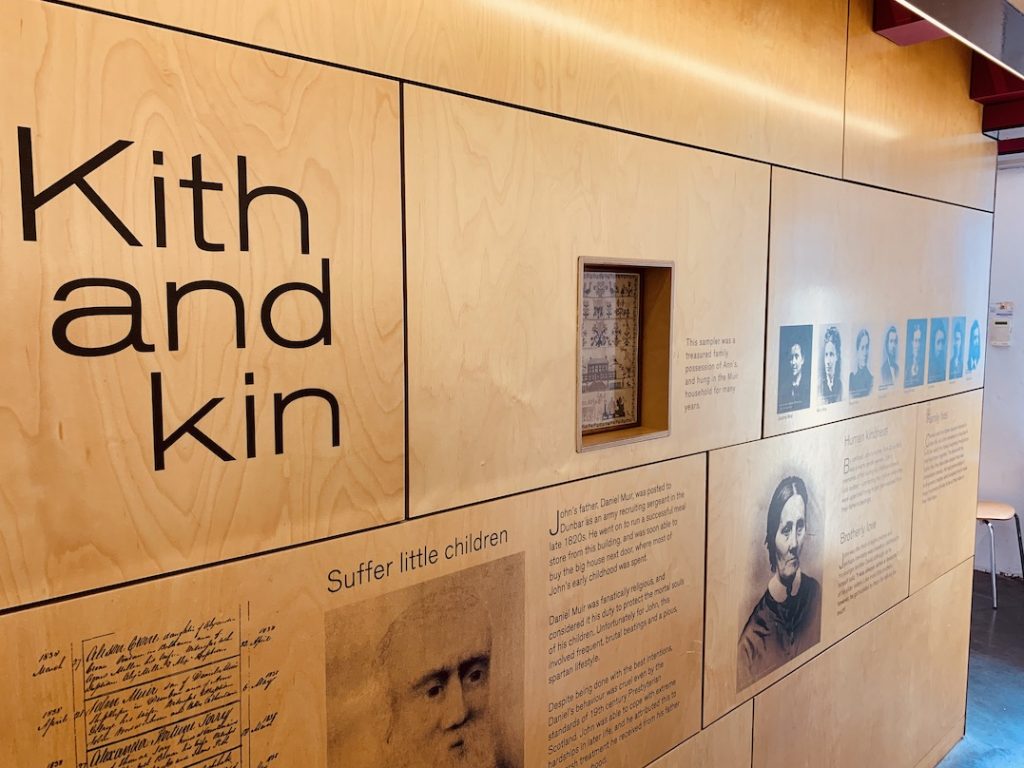 John Muir was born in this four storey Dunbar townhouse in 1838 as the third of eight children. His mother Anne was a devoted housewife, his father Daniel an army recruiting sergeant.

Papa Muir transformed part of the family home into a successful food store. You can read all about John’s upbringing in the museum’s opening exhibit. He certainly didn’t have it easy, especially as his father was a fanatically religious man who viciously beat his children for their many sinful actions. 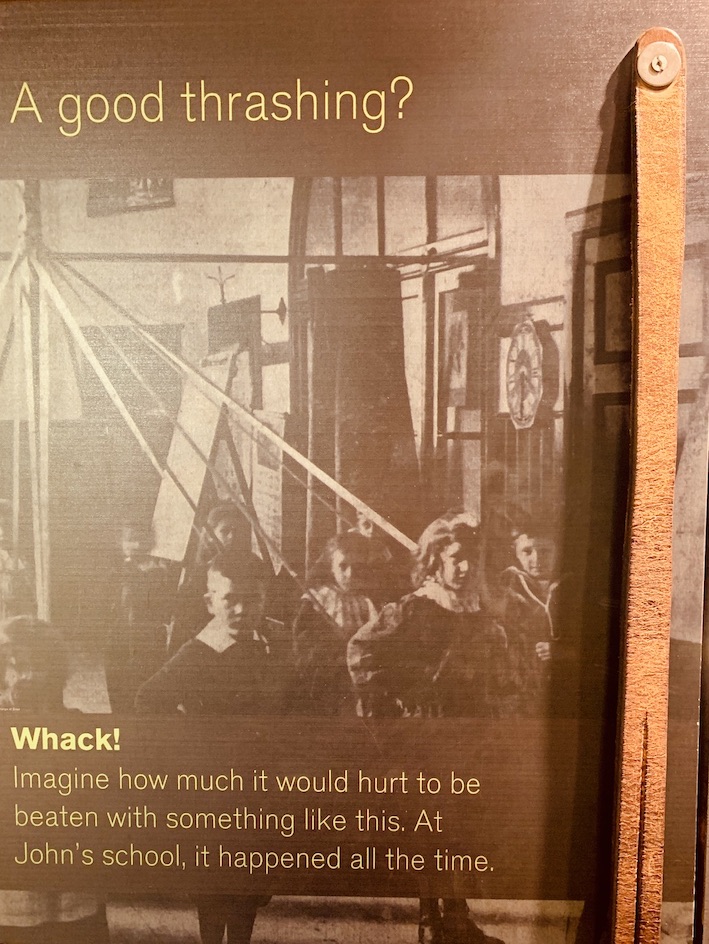 Sadly, young John didn’t get much respite at school either. In fact, teachers often beat students with sticks, canes and belts. As a result, John would escape to the surrounding countryside during what little free time he had. This is what sparked his lifelong love for nature and wildlife. 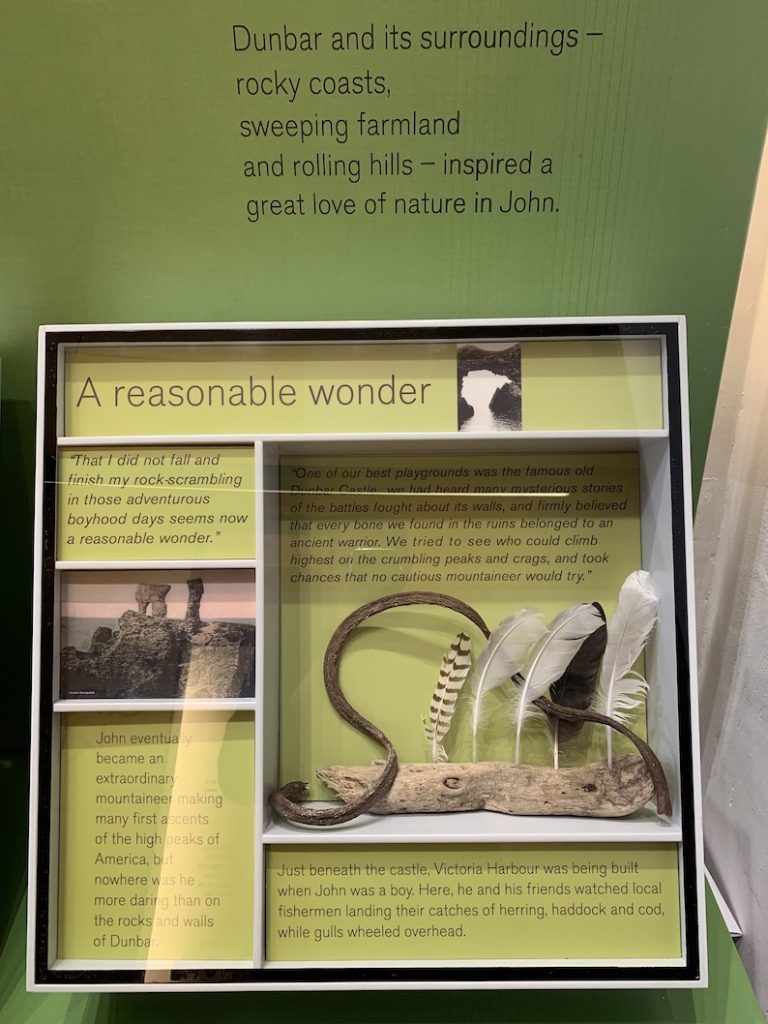 John soon grew fascinated with the East Lothian landscape and spent as much time as he could exploring the local coastline and countryside. He learned how to fish and often climbed trees to search birds nests for rare feathers. Moreover, he climbed the ruins of Dunbar Castle and spent hours watching the unfolding construction of Victoria Harbour. 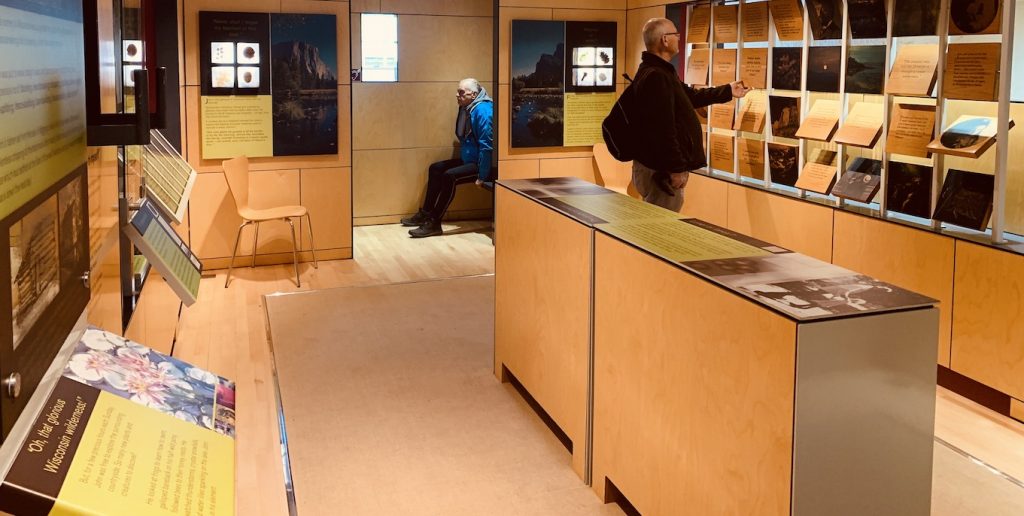 John was just eleven years old when the Muir family immigrated to The United States in 1849. His father purchased a sizeable plot of land, Fountain Lake Farm, in the state of Wisconsin. Hence young John now had even more possibilities in which to indulge in his love of the great outdoors. 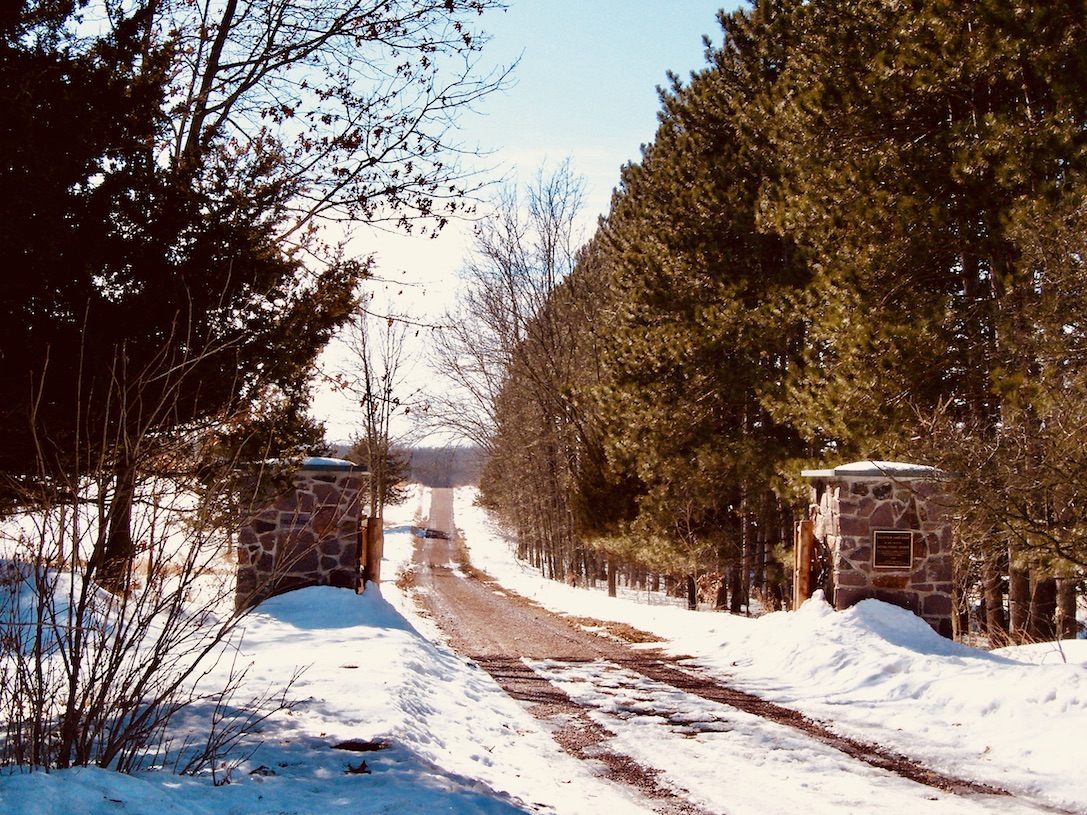 Although he eventually went to university, John never graduated and in 1864 he finally escaped his dad’s clutches for an extended period of travel in Canada. During this time he educated himself in Botany by collecting and cataloguing plants. He also worked a few odd jobs to keep himself fed. 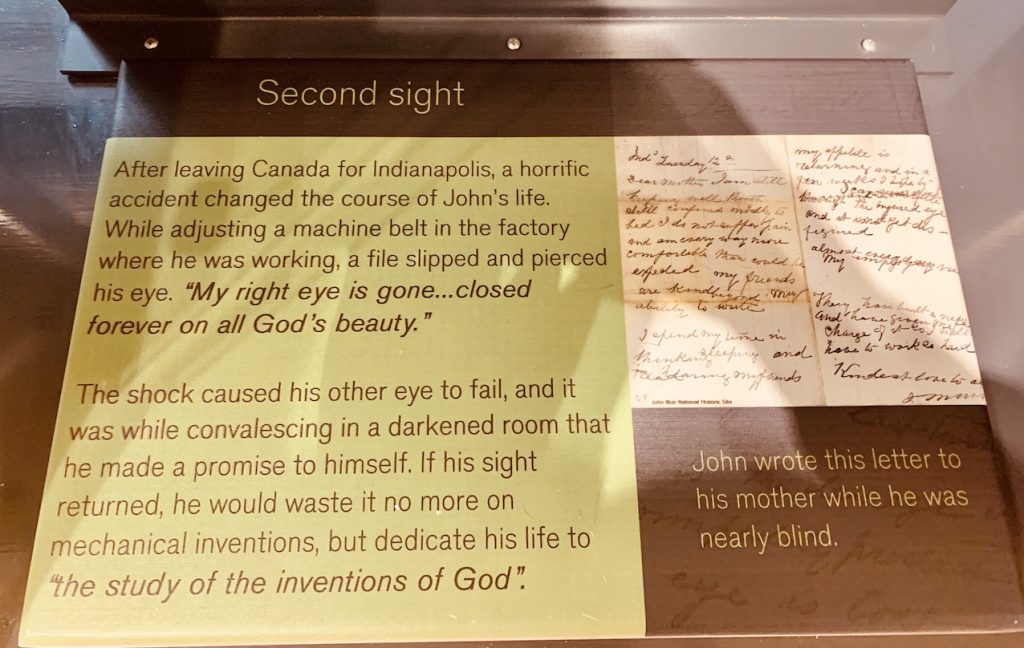 In 1866 John returned to the U.S.; this time to the city of Indianapolis to take a job in a wagon wheel factory. It was here that a horrific accident transformed his outlook on life! Imagine having one of your eyes destroyed by a spinning filing tool. That’s what happened to John, plus he temporarily lost vision in his other eye due to the shock.

In the end, John was left blind for around six weeks. When he finally got partial sight back, he emerged determined to follow his life dream of travel and the exploration of all things nature.

“This affliction has driven me to the sweet fields. God has to nearly kill us sometimes, to teach us lessons.” 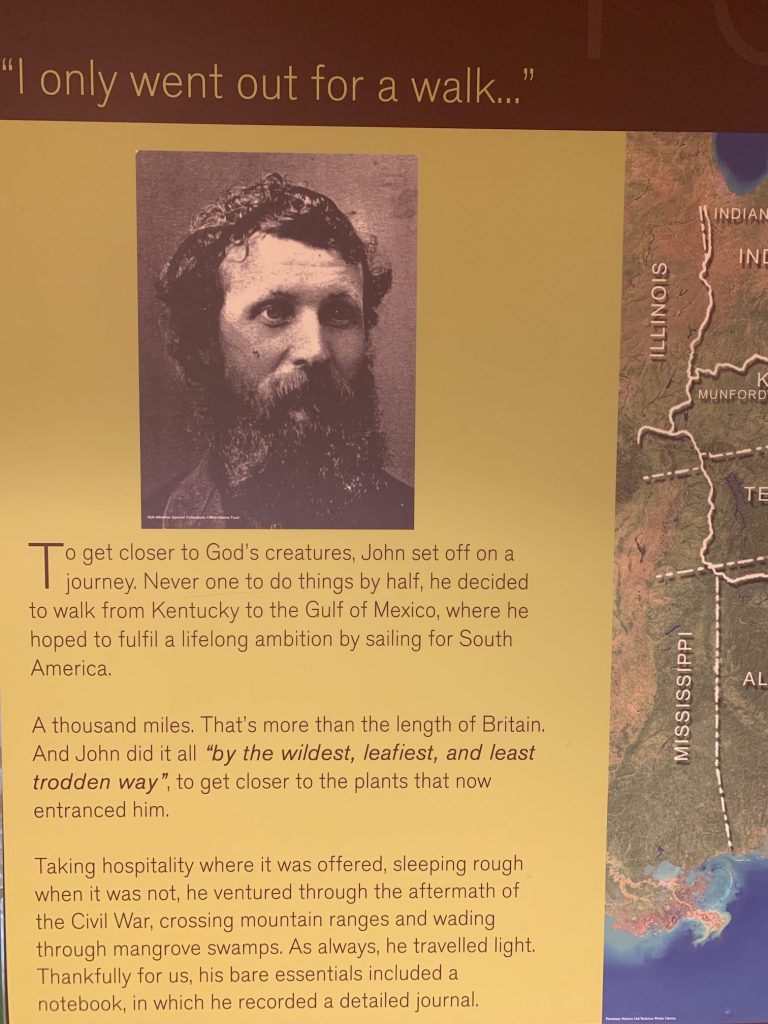 And so began John Muir’s incredible period of travel and self study. In 1867 he walked 1000 miles across America from Kentucky to Florida. Later, he chronicled this journey in his book, A Thousand-Mile Walk to the Gulf. In 1868 he sailed to Cuba, where he studied shells and flowers.

After that, he left for New York City and onto California where he got a job working as an officer for The United States Coast Survey. The museum details all these periods beautifully with interactive panels, archive photographs, maps, paintings, plant samples and handpicked quotes. 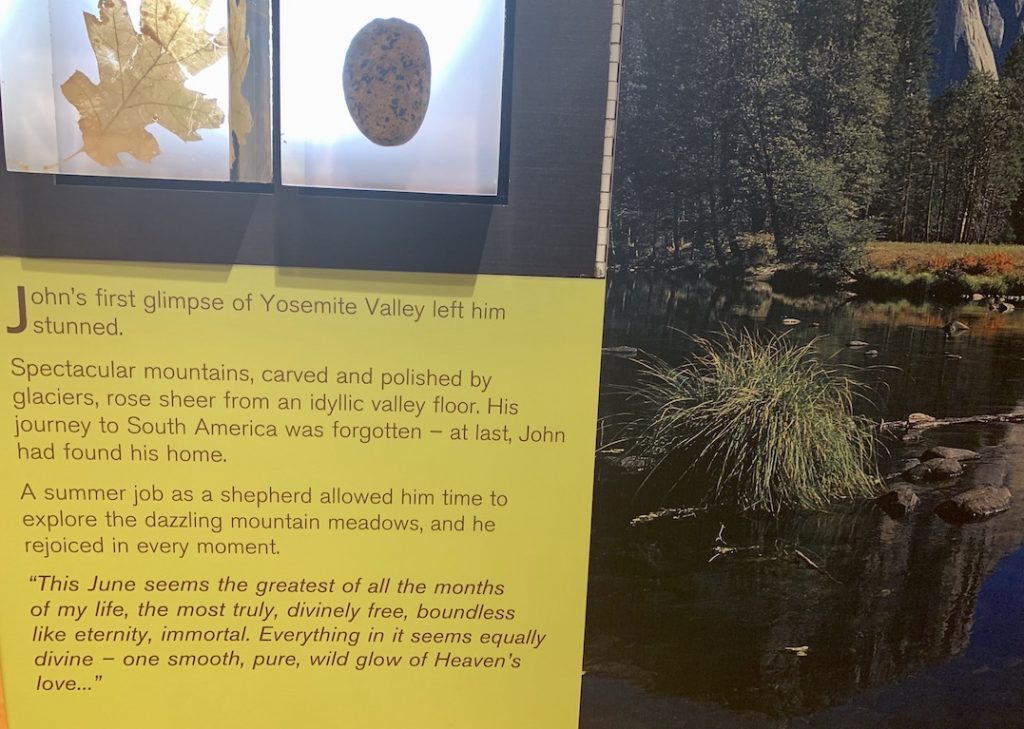 Eventually John settled in San Francisco, the perfect base for exploring and subsequently falling in love with Yosemite Park. In 1880 he got married to Louisa Strentzel before embarking on a ten year business relationship with his father-in-law. Namely managing the orchards of a huge 2600-acre farm.

Along the way, John became a respected Yosemite Park tour guide, built his own cabin by Yosemite Creek and wrote a book, First Summer in the Sierra. 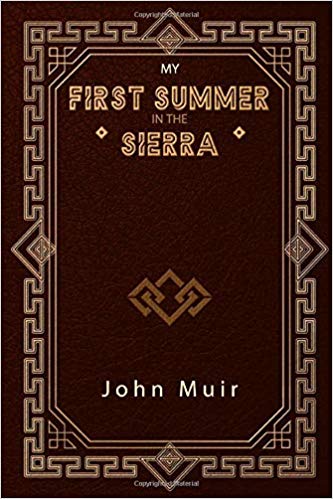 As John’s reputation grew, great opportunities came his way. He rubbed shoulders with the great photographers and landscape painters of the time. Harvard even offered him a teaching post, though he politely declined.

“I never for a moment thought of giving up God’s big show for a mere profship!” 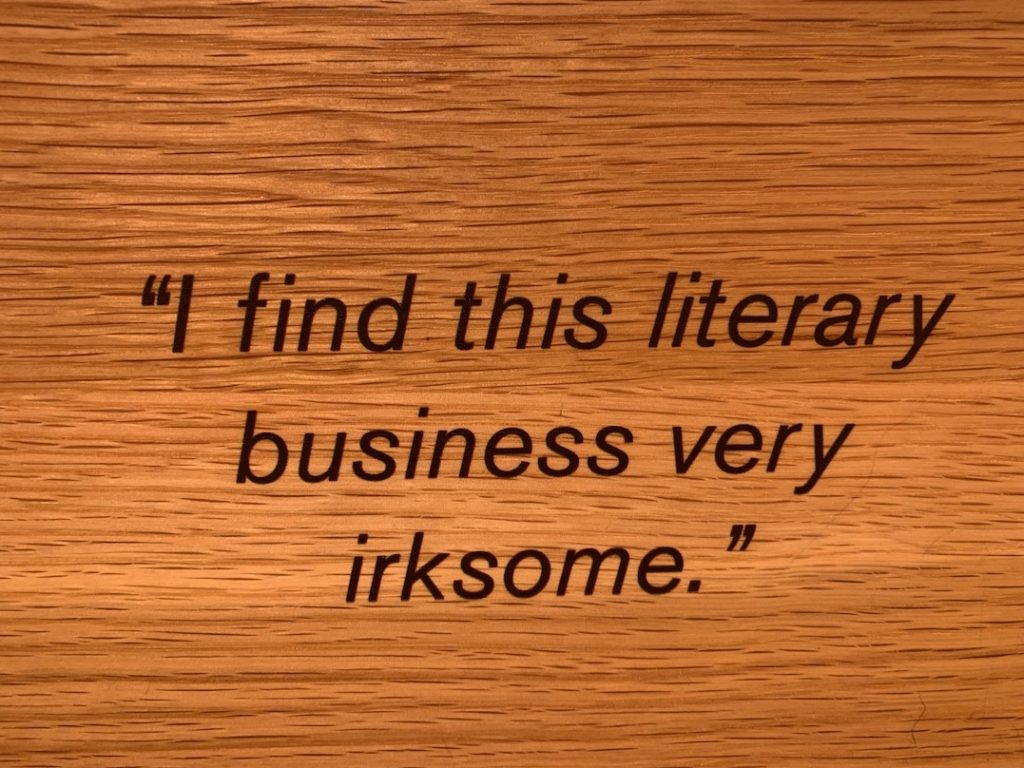 In the years that followed, the unbelievably prolific John Muir wrote more books, made multiple trips to Alaska to study glaciers and successfully lobbied to have Yosemite turned into a national park.

Two of his articles, The Treasures of the Yosemite and Features of the Proposed National Park, played a huge part in passing the bill. Despite his considerable success as an author, Muir claimed he never truly loved the process of writing. 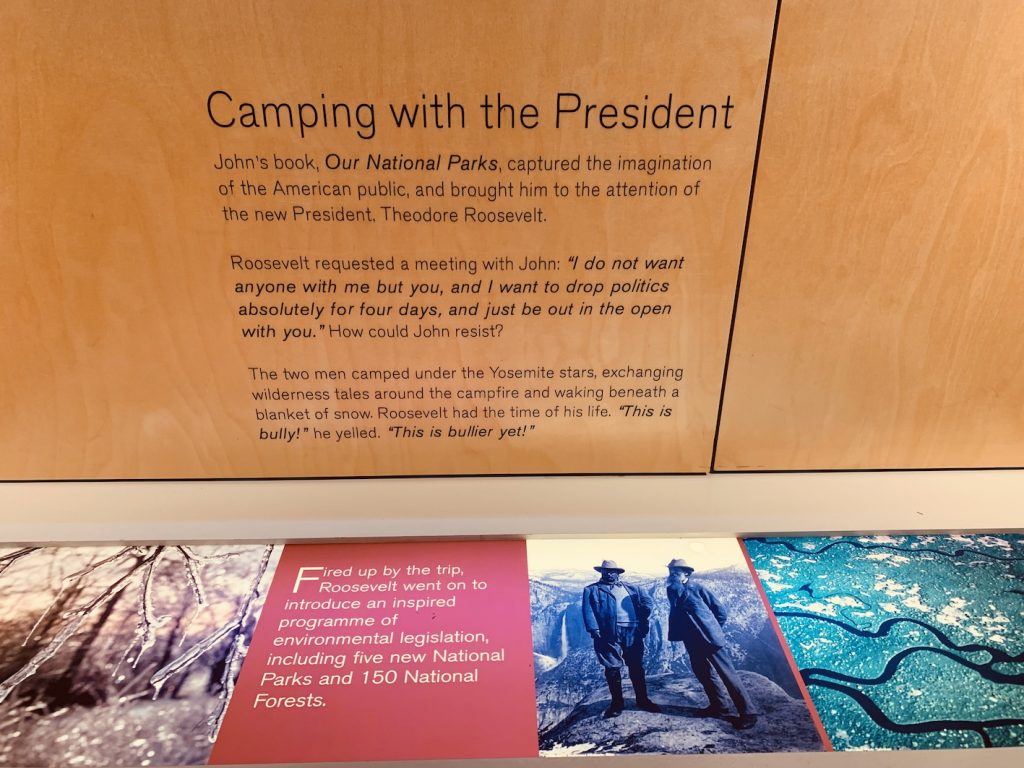 John Muir: Friend to the president.

As if all his achievements weren’t enough, Muir also formed The Sierra Club, one of America’s most respected environmental organisations. No wonder President Roosevelt wanted John to be his Yosemite guide when the leader of the free world came to visit in 1903. Even better, the experience inspired Roosevelt to kickstart a new era of environmental legislation! 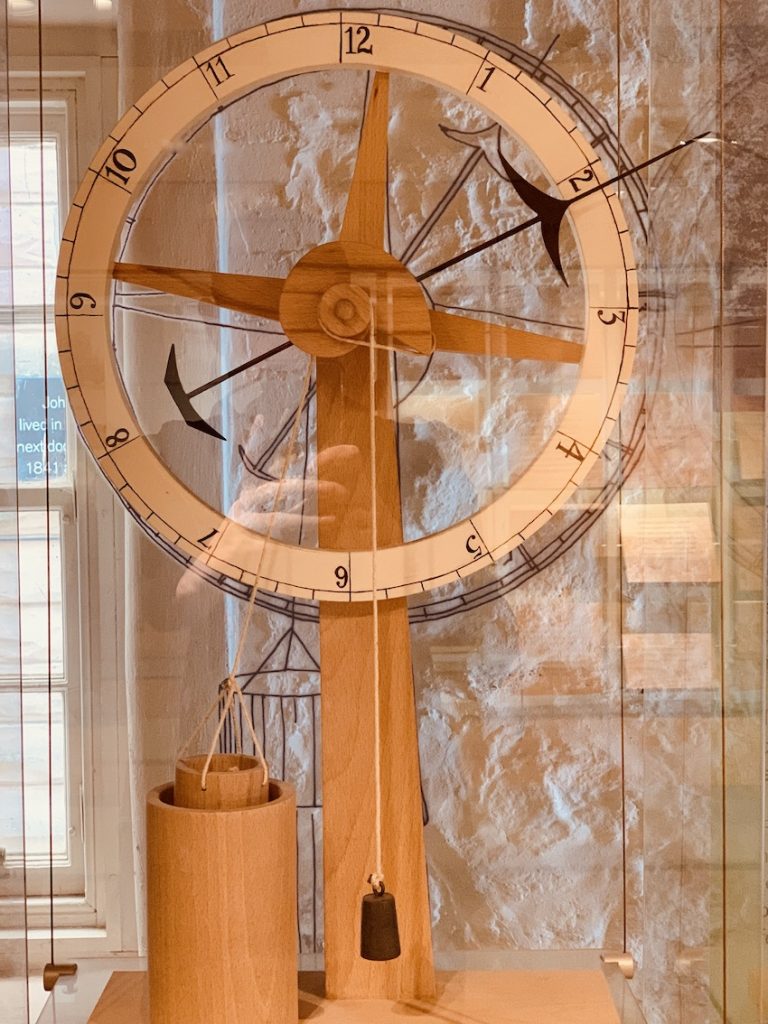 There are so many more sides to John Muir that I haven’t delved into. In addition to establishing himself as learned naturalist, writer and environmentalist, he was also a father of two, an excellent horse rider and a keen inventor. John Muir’s Birthplace exhibits a few of his creations, including the above handmade clock. 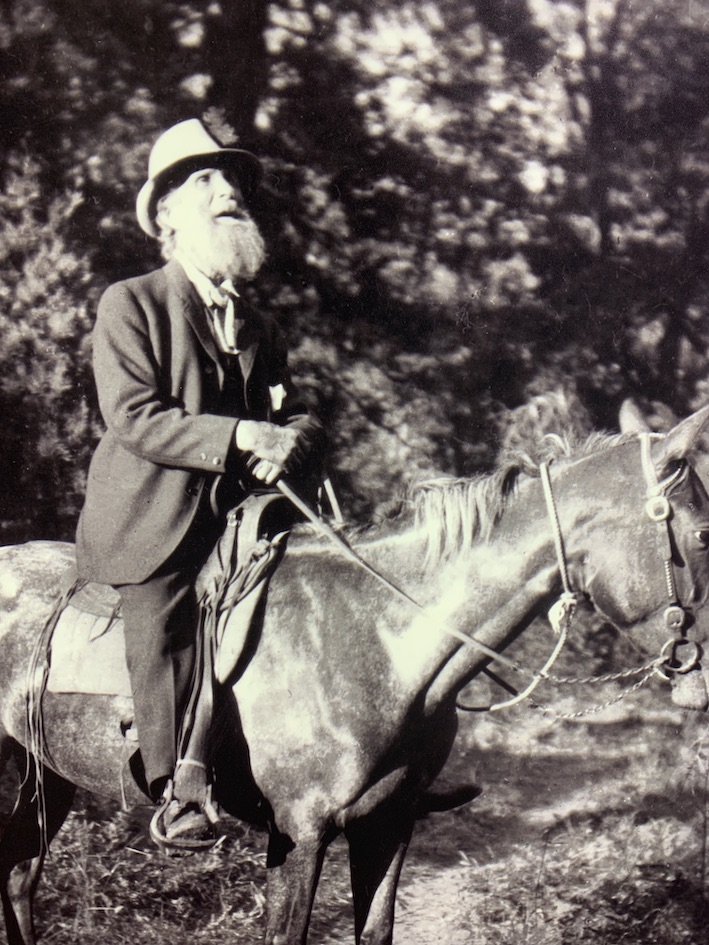 Horsing around in Yosemite.

Muir died in an L.A. hospital at the age of 76 after contracting pneumonia. In the years that followed he’s had stamps created in his honour and a mountain named after him. The state of California recognised his staggering contribution to American history with the creation of John Muir Day. It’s held annually every April the 21st, which is also John’s birthday. 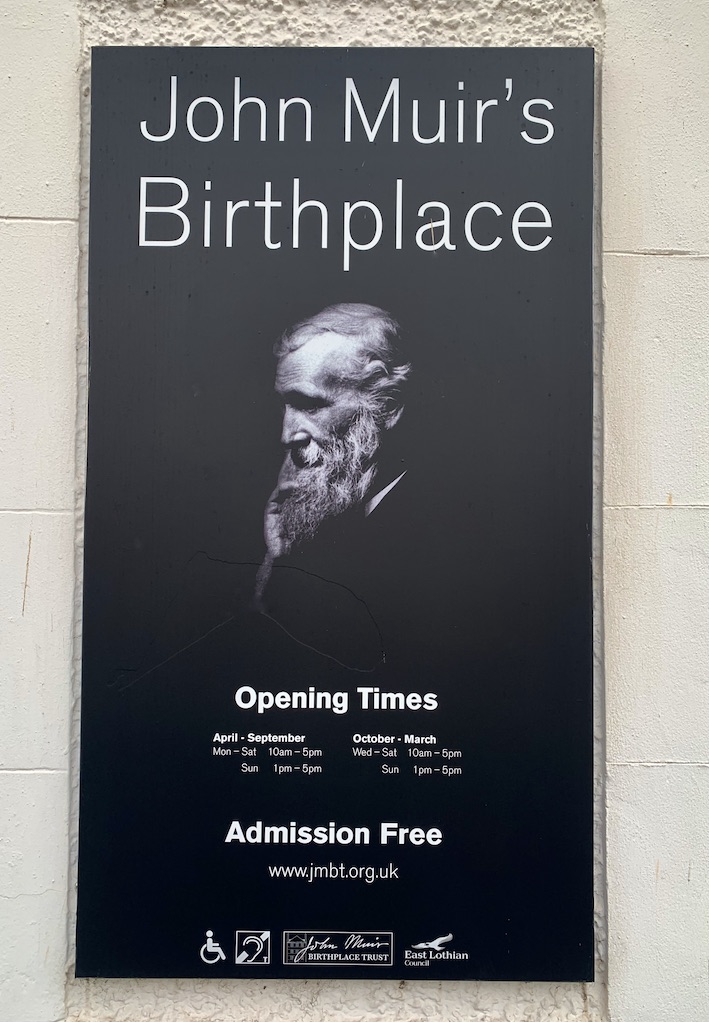 And of course the humble Scottish town of Dunbar does their bit in remembering him at John Muir’s Birthplace. If you’re interested in paying a visit, you’ll no doubt be delighted to hear that entry is free. For opening times, special events and more, head to the official website.