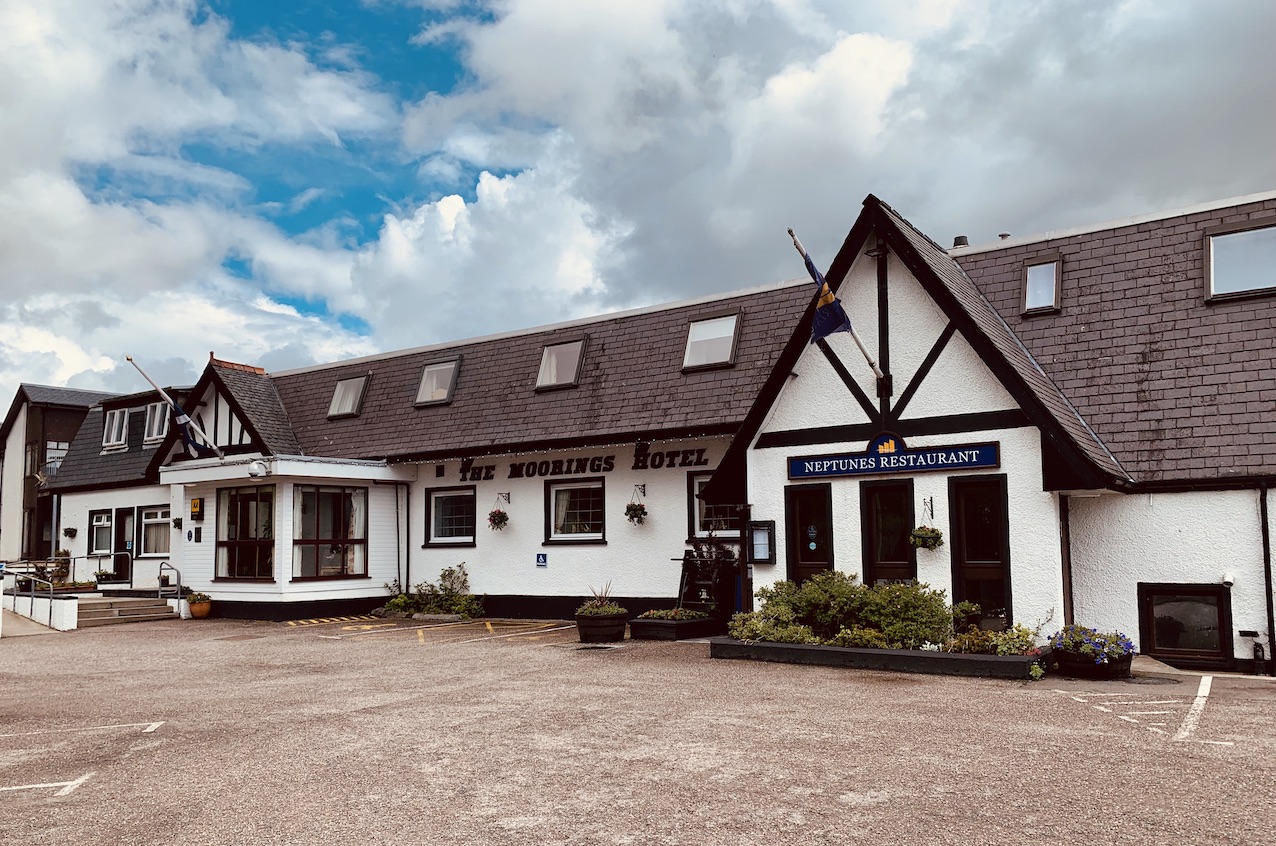 If you’re coming to Banavie and looking for a roof over your head, the swankiest place in the village is The Moorings Hotel. You can find it located right on the banks of The Caledonian Canal at the beginning of the The Great Glen Way hike from Banavie to Gairlochy. 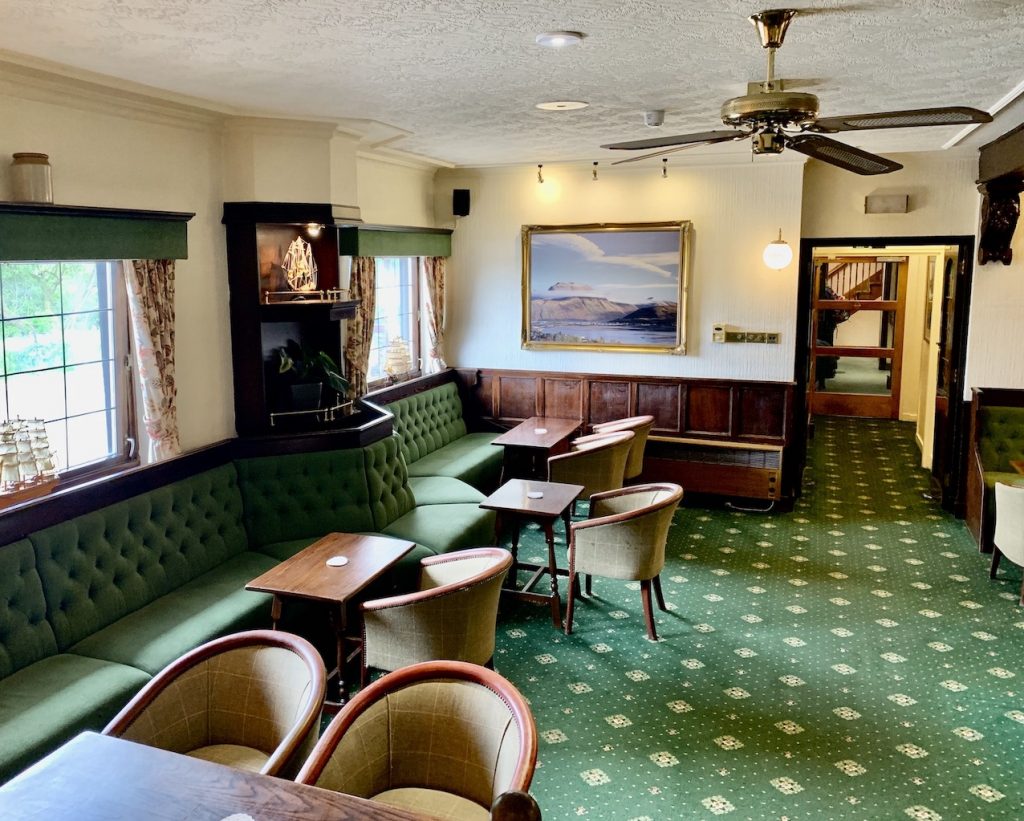 The Moorings is just a two minute walk from my sister’s place on Old Banavie Road and about the same distance from my friend Rob’s house on Canalside. As a result, my visits to Banavie would usually involve an evening or two here for a drink and some writing.

In 2016 I actually took a temporary job at The Moorings as the night porter! At the start of my shift, I’d have to clear away all the glasses from The Upper Deck Lounge Bar. Then stack the chairs on the tables and sofas. That way, the cleaner would have unobstructed access to the place for her morning vacumming. Other tasks included setting up the buffet table for breakfast and switching off lots of lights. Yup, it certainly was a rock n’ roll gig! 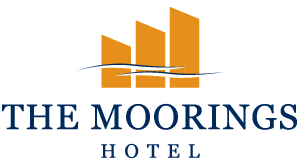 I was trained by an amusing local man called Dougie. He was a real character, especially with all his stories of past adventures in the Territorial Army. Dougie took his job as chief night porter very seriously. In fact, he would come to work wearing a total kit around his waist, which my friend Rob referred to as The Bat Belt. To this day I have no idea what Dougie kept in there, but quite a few of my friends and colleagues would speculate on it. First aid kit? Revolver? Secret service earpiece? Tampons? 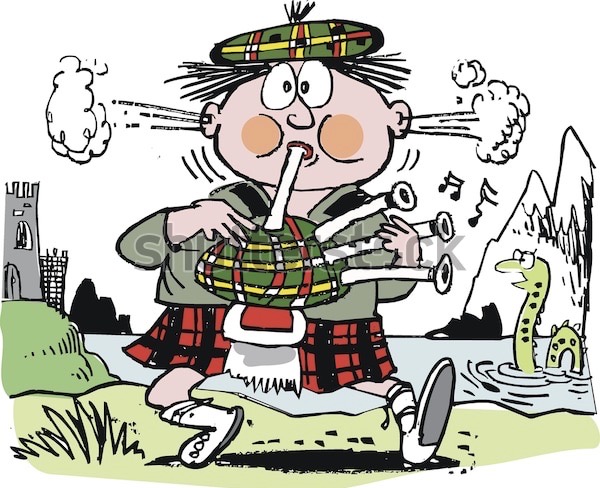 All joking aside, Dougie was really kind to me. He showed me the ropes, made me tea and assured me he’d always have my back with the management, who he saw as the enemy. Dougie also insisted there were things I absolutely did not have to do as night porter. In fact, his official motto was pretty much: “Das nae ma jawb!” (That’s not my job) 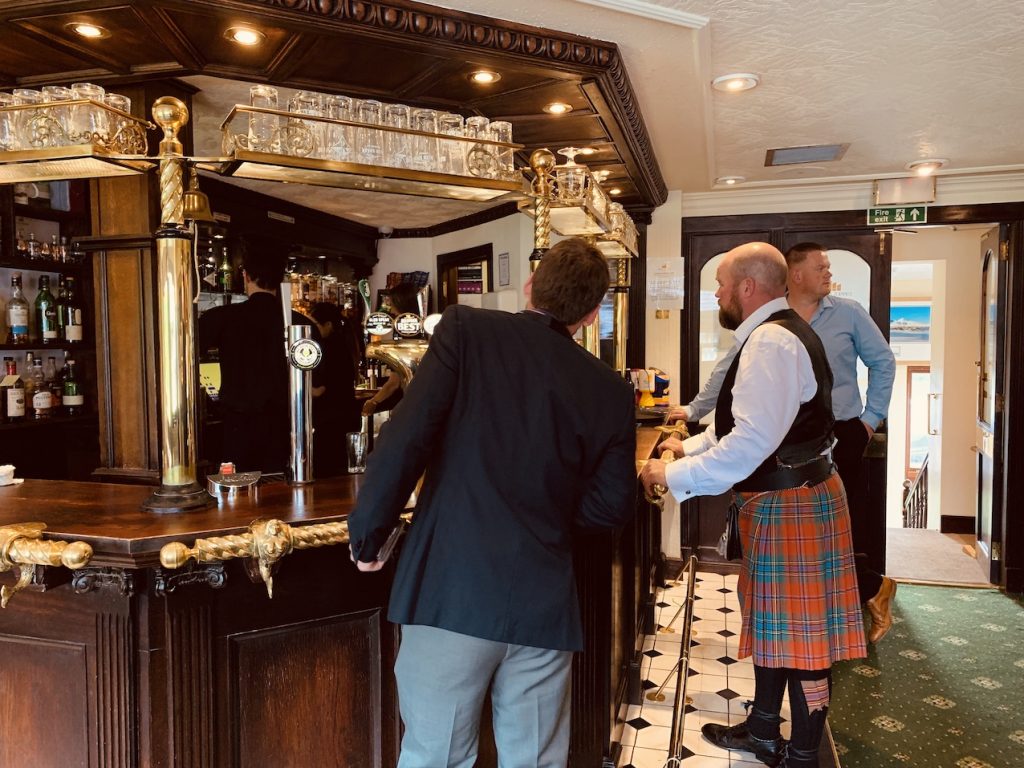 The bar at The Moorings.

Very occasionally I might have to go behind the bar and serve drinks. This was not good for me, because I hated being a barman. This was equally bad for the customers, due to the fact that I am the world’s worst barman. 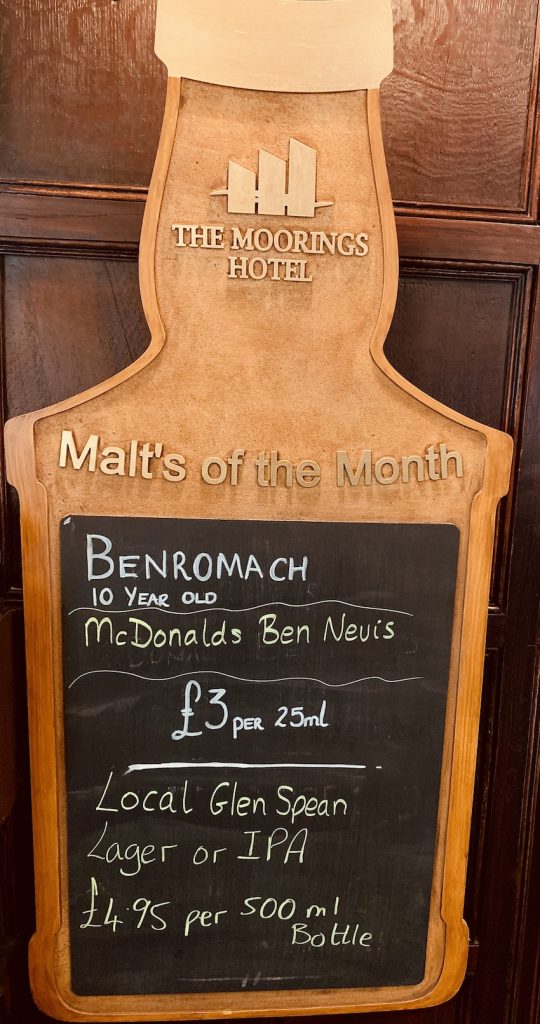 Malts of the Month at The Moorings Hotel.

Still, they do have a lovely bar at The Moorings. Especially if you’re into a “wee dram” of Scottish whiskey. 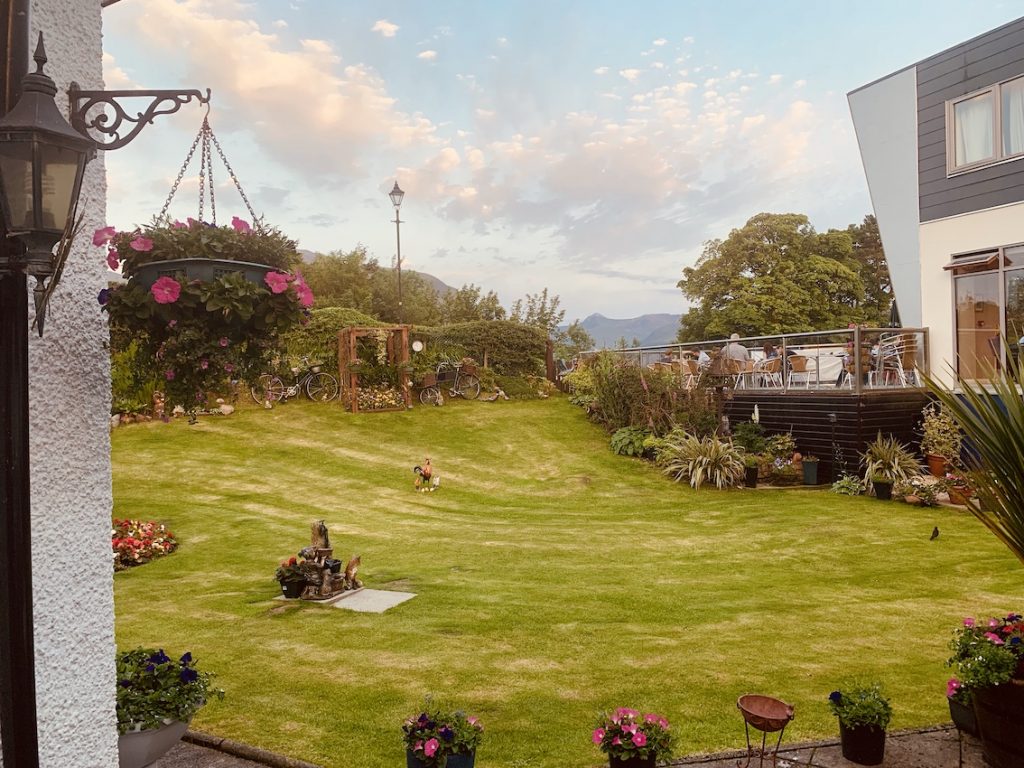 The Beer garden at The Moorings.

Whatever you’re drinking, the beer garden is definitely the best place to sit and chill. Weather permitting of course, which isn’t that often in the north of Scotland.

A double ensuite at The Moorings Hotel.

There are 32 rooms at The Moorings, some of which offer panoramic views of Ben Nevis. All rooms have cable TV and a seating area. You can also arrange for someone to deliver dinner right to your room. One of my duties as night porter was to scan the corridors for discarded dinner trays outside the door. There were nearly always one or two that needed taking away. Believe me, you haven’t lived until you’ve scraped mushy peas off a stranger’s plate. 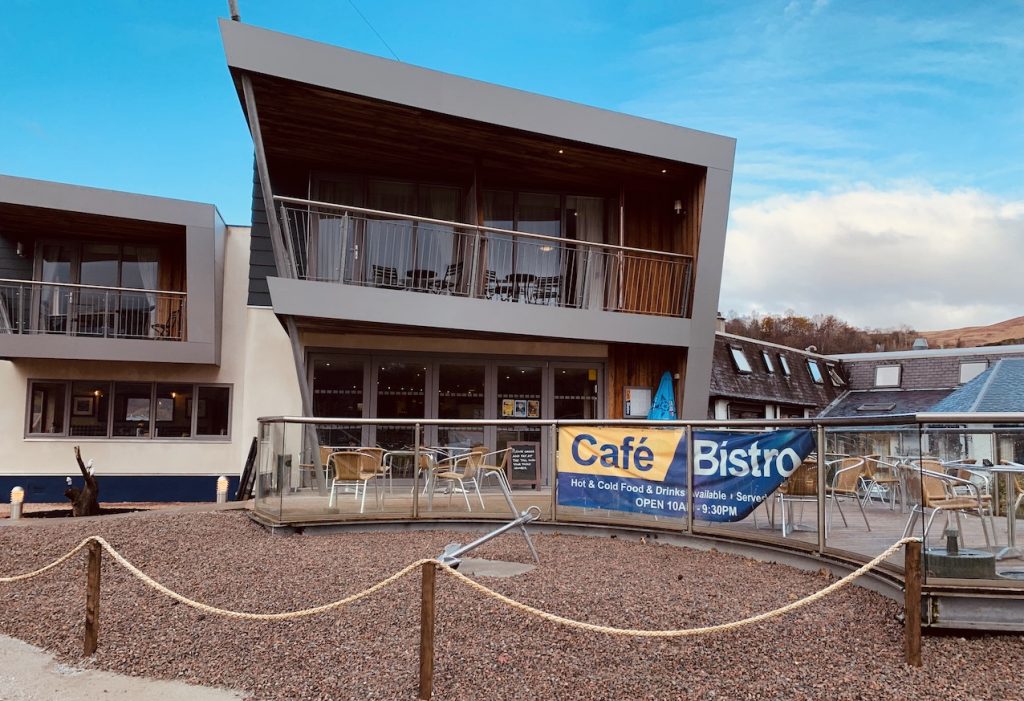 The Cafe Bistro at The Moorings.

During my last stay in Banavie I spent a fair amount of time at the hotel’s cafe bistro. In fine weather, the outside decking is the best spot, as it overlooks The Caledonian Canal. 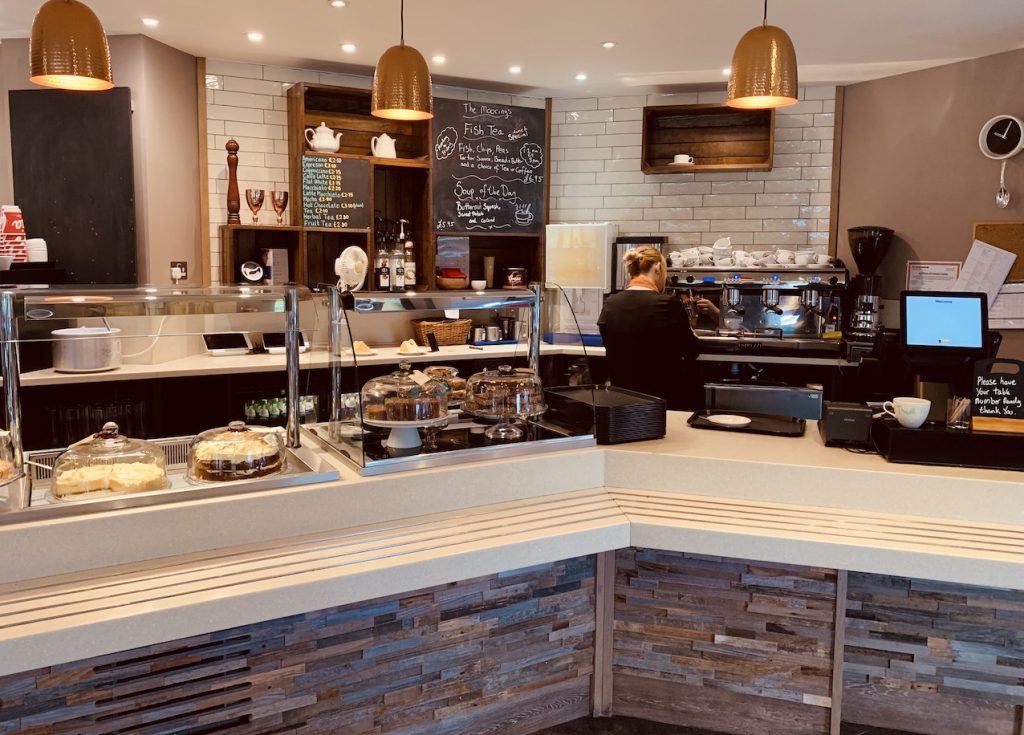 In the autumn of 2019 I’d come here a couple of times a week for coffee, breakfast and blogging. In all honesty the service was often slow and a couple of the waitresses were a bit on the grumpy side. 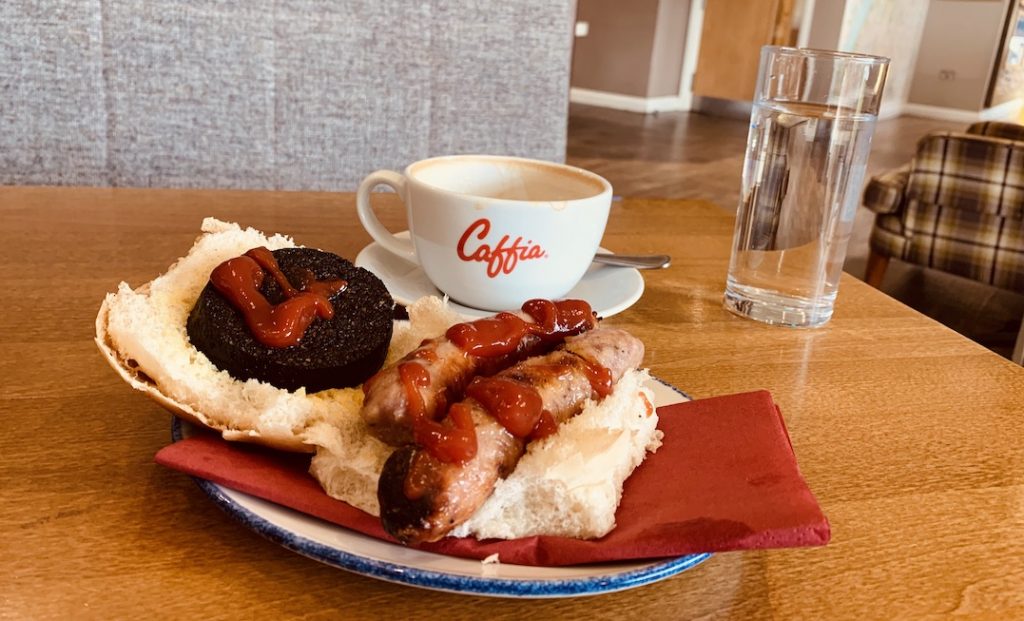 A hearty Scottish breakfast at The Moorings Hotel Cafe Bistro.

Having said that, they do consistently produce a solid cup of coffee. Moreover, I have such a weak spot for their black pudding and sausage roll. Trust me, it’s better than it looks. 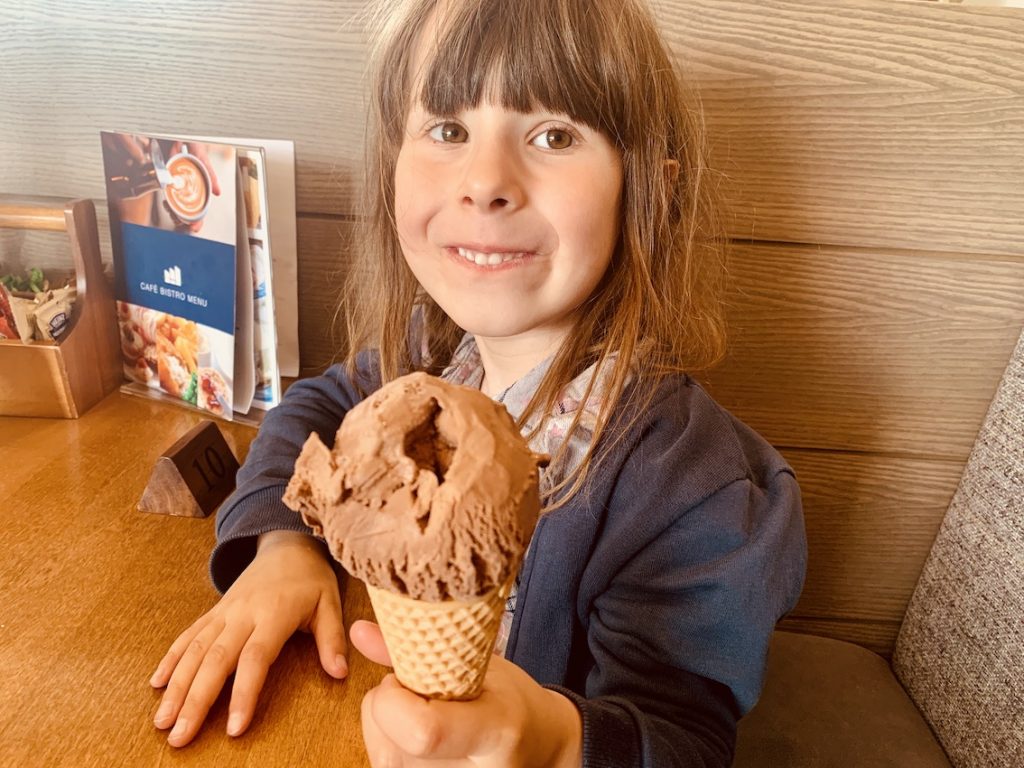 Finally, I know a certain someone who believes a visit to The Moorings is all about the chocolate ice cream. Fancy a bite?

For more on the Moorings Hotel, head to their official website.