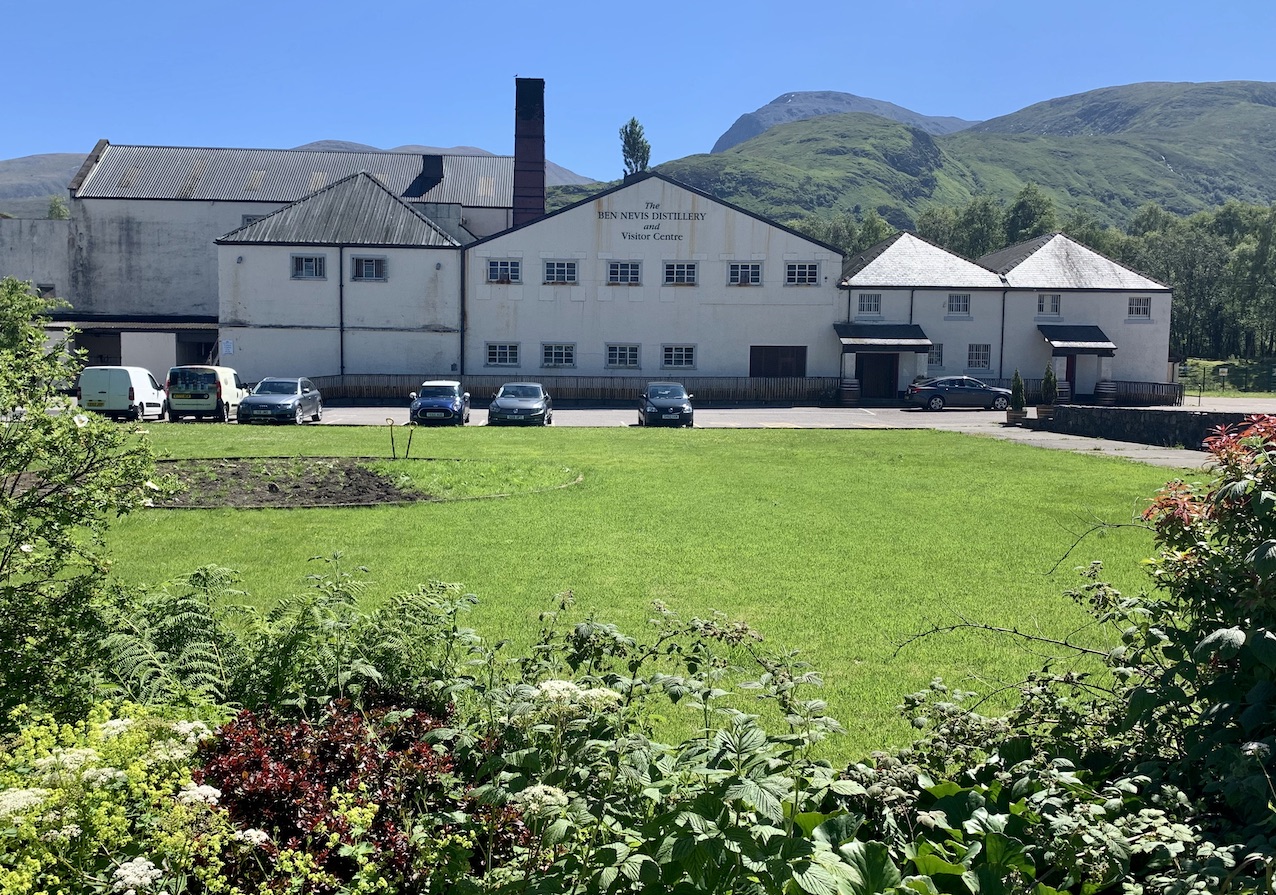 June 2019. They make whisky in Scotland, you know. It seems to be very popular with people. I had a glass of whisky once and it tasted like someone had shoved The Olympic Torch down my throat. I remember thinking f****, I shan’t be doing that again. Nevertheless, I couldn’t leave Ben Nevis Distillery out of my guide to Fort William.

After all, it has such a rich history and still produces 10 year old and 21 year old single malts. Moreover, the water they use in their whisky comes directly from Ben Nevis Mountain. The distillery dates back to 1825 when it was founded by two local businessmen, Angus McDonnell and the brilliantly named ‘Long John’ McDonald.

Grab your tour ticket at the front desk before making your way into the cafe and shop, which also serves as a waiting room. Hopefully the guy you meet at the ticket counter won’t be quite as sour-faced as the dude I had to deal with.

There are a bunch of different ways to visit the distillery. I went for the Standard Tour, at a reasonably priced £5. Which incidentally comes with a free taste at the end.

I certainly wasn’t expecting the gruff man who’d begrudgingly sold me a ticket to be my tour guide! But that’s how the chips fell. He kicked off proceedings with a brief introduction and a long list of rules and regulations. And believe me, when this guy says “no video”, he isn’t kidding around.

The strange looking contraption pictured above is a grist hopper. Basically it hydrates milled malt before it gets fed into the stainless steel mash tun that sits behind it. The mash tun uses heat from boiling water to induce natural enzymes to break down grain starch into fermentable sugars. 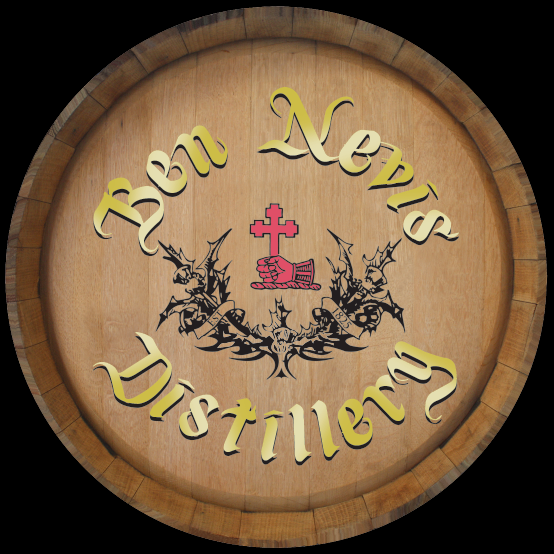 We also got a bit more history. In 1856, Donald McDonald (seriously) took over the place after his father Long John passed away. The next key owner was Joseph Hobbs, who arrived here in 1955.

Under his guidance, it became one of the first distilleries in the world to produce both malt and grain whisky simultaneously. Apparently Hobbs’ masterstroke was to introduce a complicated (to me at least) process known as Continuous Distillation. 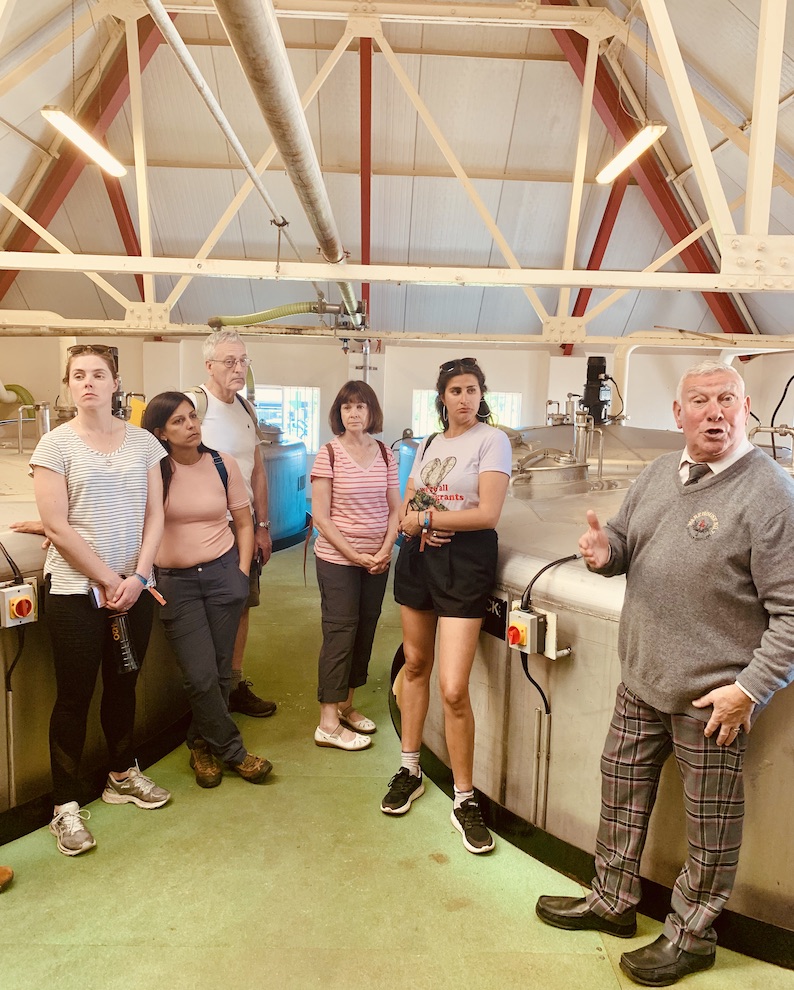 This is the washback room, which is where they produce the alcohol that goes into the whisky. The sugary liquid (called wort) from the mash tun gets channeled into the washbacks along with added yeast. It’s at this point that the brewing process begins. Most of these units are stainless steel and date back to the 1970s.

However, a couple of the washbacks are actually wooden, barrel style units. Our guide was keen to point out that these were only added for increased visual appeal and to give the room “more of a traditional look”. Does the stuff brewed in the wooden washbacks taste any different? According to our guide, not at all.

By now our host seemed to have warmed up a little and even started cracking a few jokes. Although to be honest he might have just been tipsy from the fumes of the washback. I wish someone had warned me how incredibly strong the smell is, because I foolishly stuck my nose right in there. It’s a wonder I didn’t pass out.

The stillhouse, where the pot stills live, is the largest room of the tour. Think of a small aircraft hangar in terms of size. This is where the actual distilling takes place. 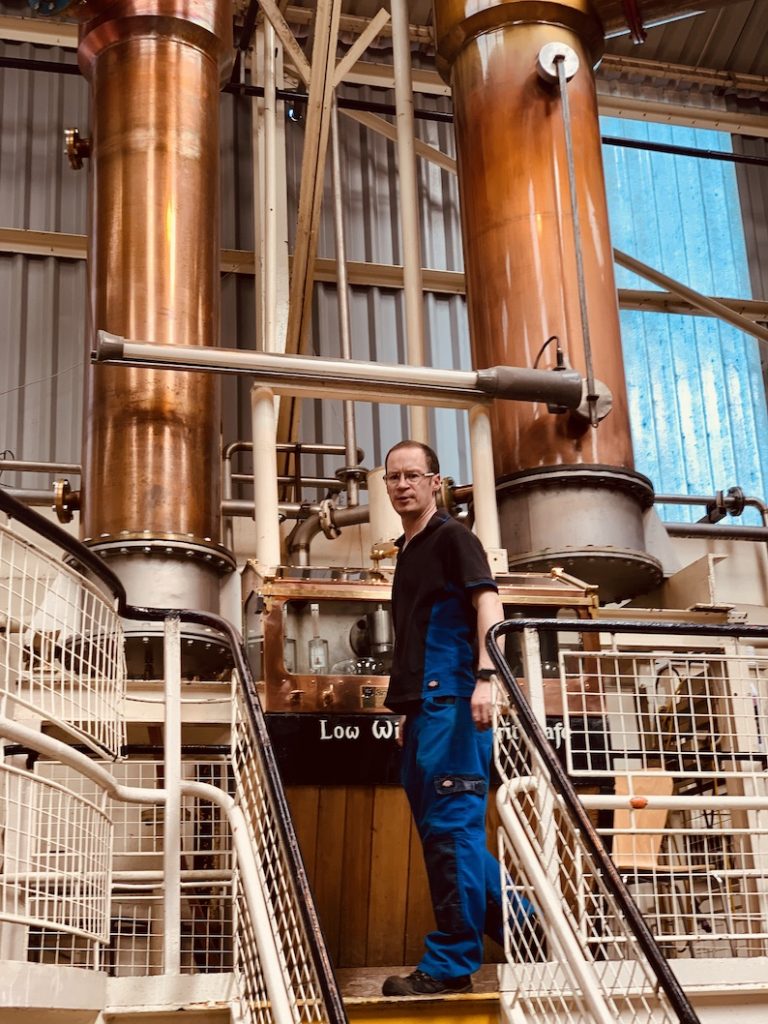 There are two wash stills, which carry 25.000 litres. There are also a couple of spirit stills that hold 20.000 litres. The stills are tubular and cone-shaped with a wide neck.

Eventually, the tour took us all outside where we passed a delivery truck. These days the place is owned by Nikka Whisky Distilling, which means a lot of the stuff here gets shipped to Japan for maturing.

It was also cool to see all the stacked oak casks out in the back lot. Remember that if you’re a single malt, you’ll be maturing for at least ten years, sometimes longer. It’s weird to think that I’ll be at least 50 years old by the time most of this freshly casked whisky makes its way into somebody’s glass.

At the end of the tour I found myself back in the shop to claim my “wee dram”, as the Scots say. Much to my delight and general surprise, I really enjoyed it! As a result, I found myself enquiring what exactly I’d just guzzled.

Apparently, I had tried a little of the McDonald’s Single Malt. A bottle of this stuff goes for £44.50 and yes, they’ve got plenty stocked in the shop cabinets. And from what I could see the place was doing a roaring trade, with both Scottish and foreign tourists forming a steady queue.

If you’re really into your whisky, why not treat yourself to a night at the nearby Distillery Guesthouse. This handsome hotel was converted from three former distillery workers’ cottages and features archive photographs and paintings of Ben Nevis Distillery.

To find out more about how to visit Ben Nevis Distillery, head here.

You can also leaf through more of my reports from Fort William.