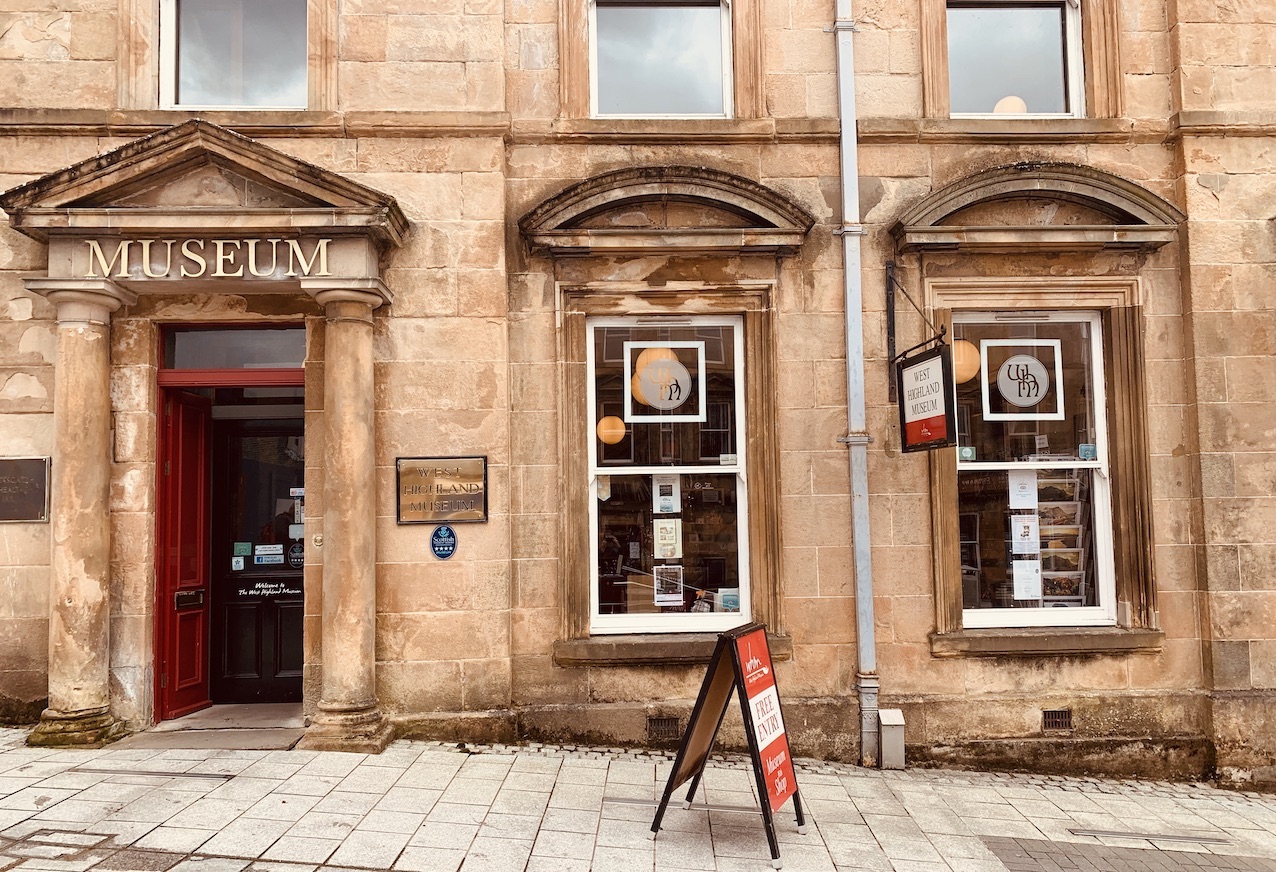 June 2019. Fort William Town Centre isn’t blessed with an abundance of sights. However, the High Street is much improved from the incredibly drab, run down place it was when I first came here in 2002. Moreover, there are a handful of charming spots worth visiting if one makes the effort to poke around. The main attraction is the West Highland Museum, which tells the story of Scotland’s West Highlands region through its landscapes, history and people. You can find it just off the High Street on the south side of Cameron Square. 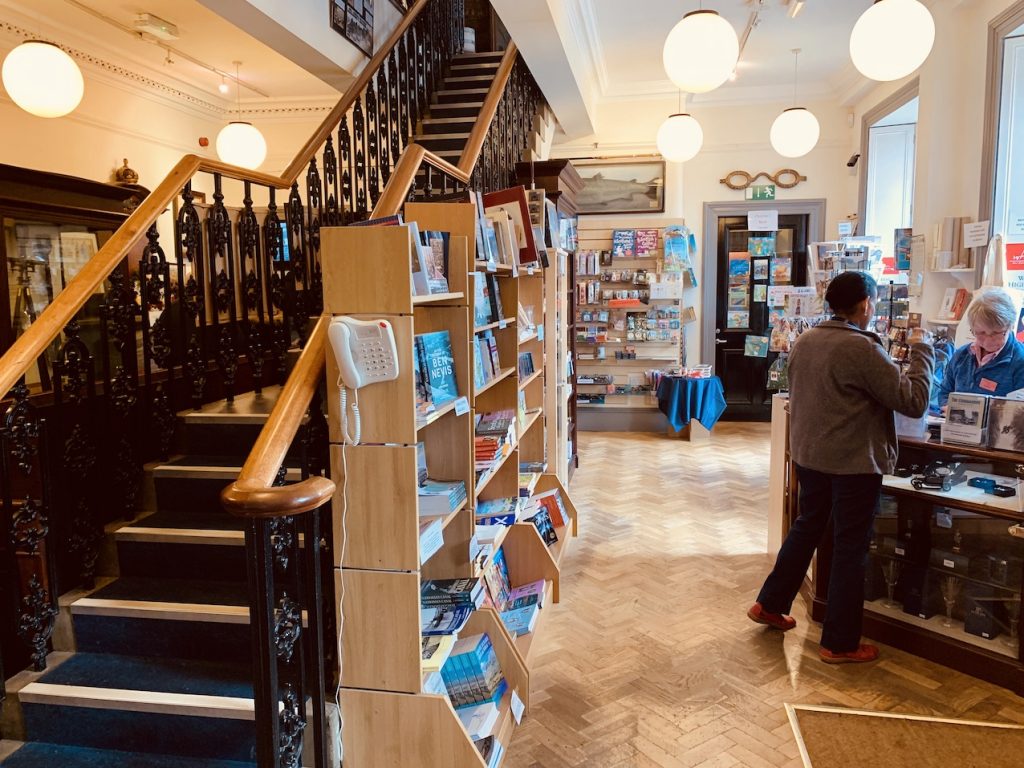 The West Highland Museum is an independent enterprise founded in 1922 by the English architect Victor Hodgson. He and a few friends began collecting regional antiques and art, before purchasing this building in 1926. They took it over from a former branch of The British Linen Bank. 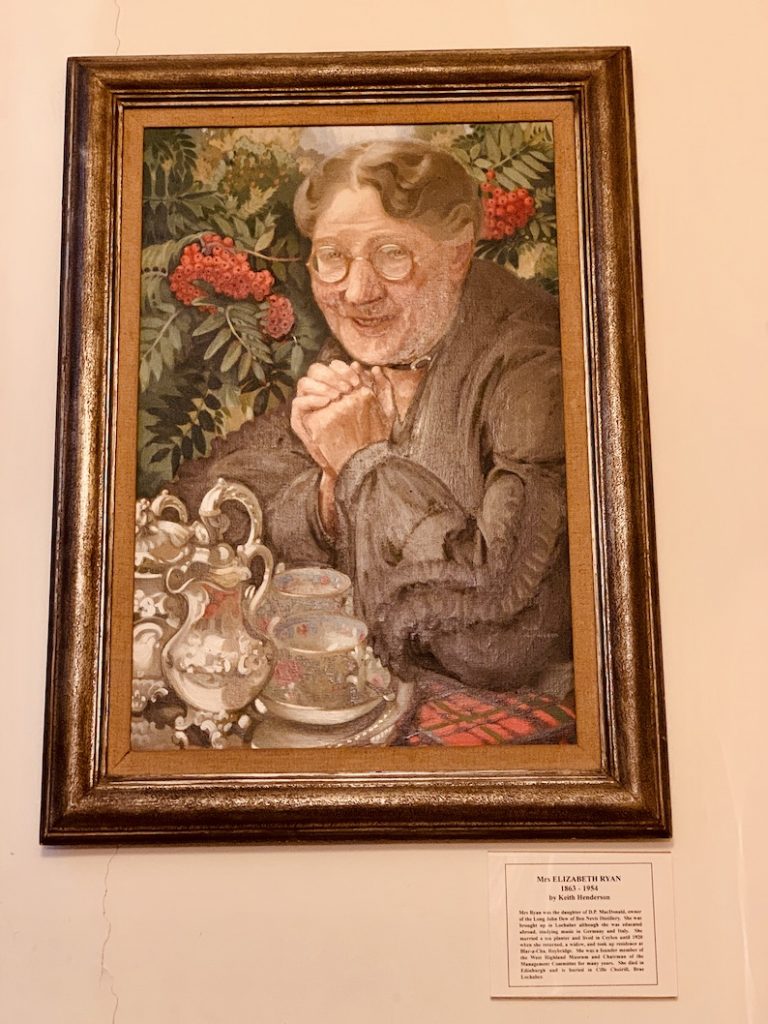 Another of the museum’s founders, Mrs. Elizabeth Ryan, is honoured here with a portrait by Keith Henderson. Born in 1863 as the daughter of Ben Nevis Distillery owner Donald McDonald, Elizabeth studied in Germany and Italy before marrying a tea planter and living in Sri Lanka for many years. Eventually, having become a widow, she returned to Fort William and became a key figure among local historians. 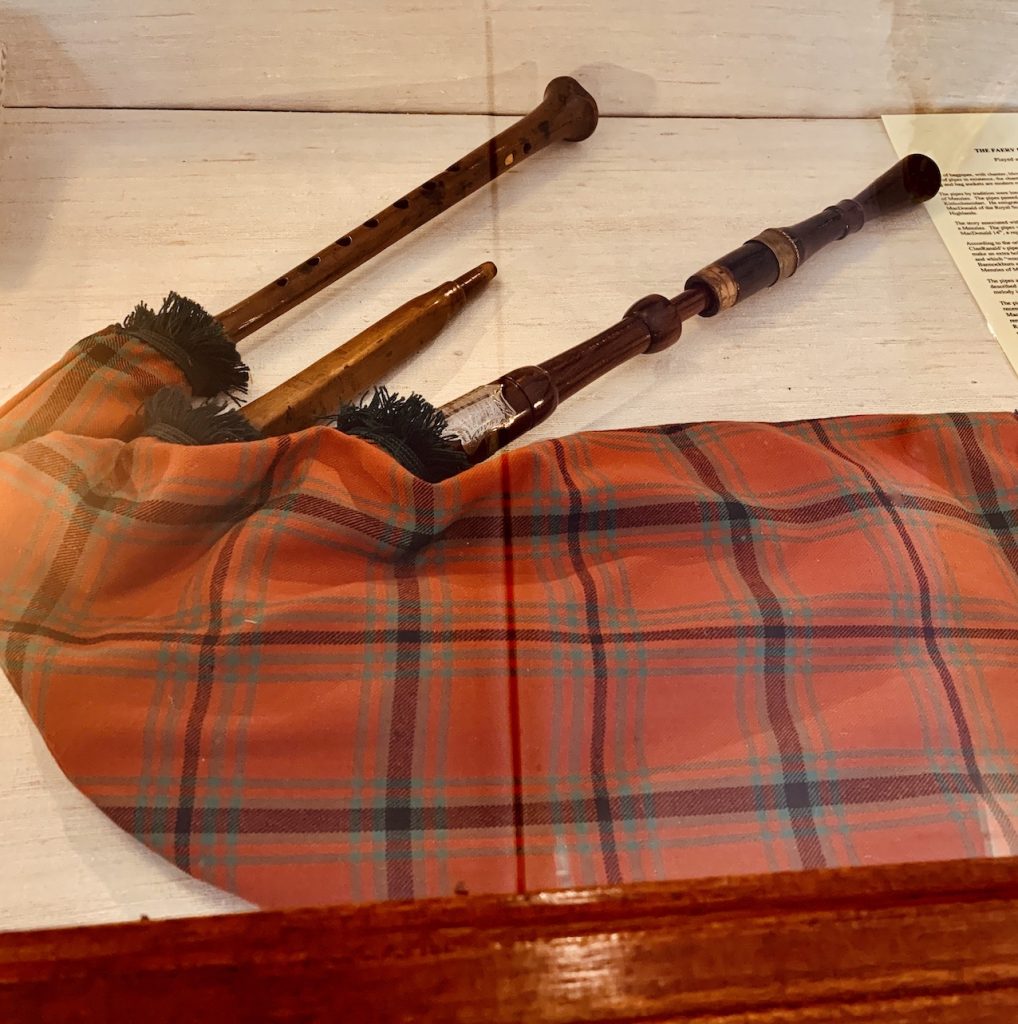 Quite possibly the world’s oldest set of surviving bagpipes.

The West Highland Museum is a wonderfully informal affair. The narrative here is really loose, a bit like having a rummage through your great grandfather’s attic. You never quite know what you’re gonna find. How about The Faery Pipes of Moldart? According to historians, these are the oldest surviving pair of bagpipes in the world! Apparently, military pipers played these things at The Battle of Bannockburn in 1314.

The Faery Pipes of Moldart.

As the legend goes, a MacDonald of ClanRanald piper sat fixing up the bagpipes when a fairy appeared and told him to “make an extra hole”. This, the fairy insisted, would ensure a brand of music that’d “strike fear into the hearts of the enemies”. Consequently, they say the pipes have never been on the losing side of a battle. 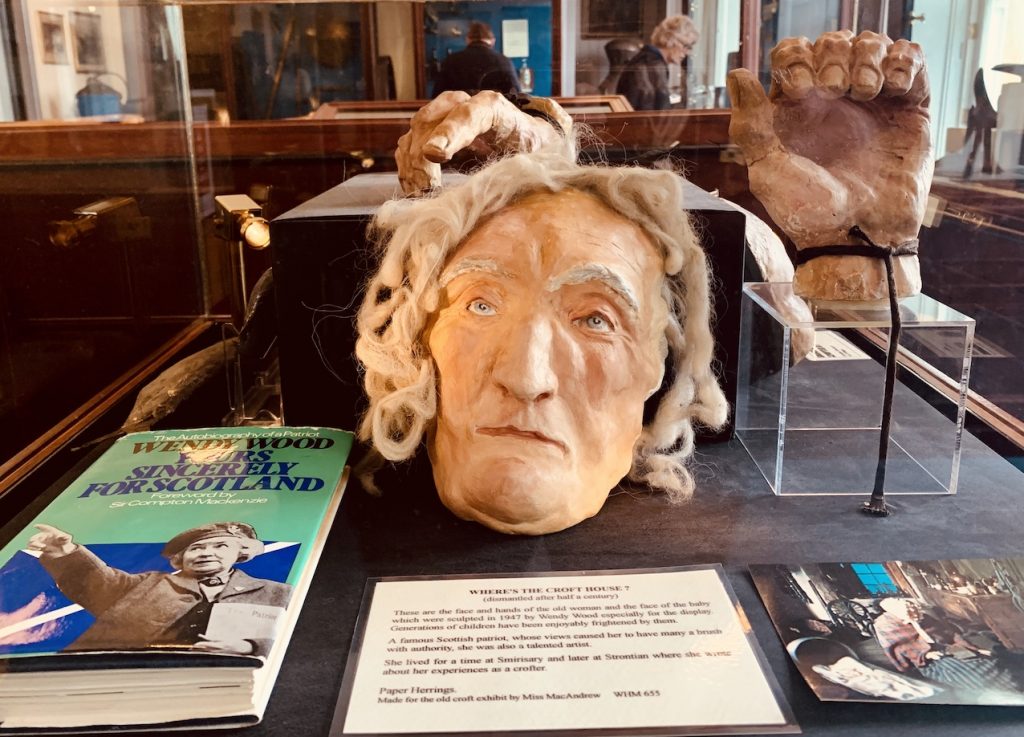 The Wendy Wood display at The West Highland Museum.

Another curious exhibit is a tribute to the Scottish artist, sculptor, writer and political activist Wendy Wood. She was an often controversial figure who was certainly no stranger to a brush or two with the law. Wood was also co-founder of The National Party of Scotland. The movement eventually grew into today’s Scottish National Party. Wood made the ghoulish face and hand sculptures here especially for the museum as part of an exhibit about her life as a crofter. The pieces appear alongside a copy of her book, Yours Sincerely, For Scotland. 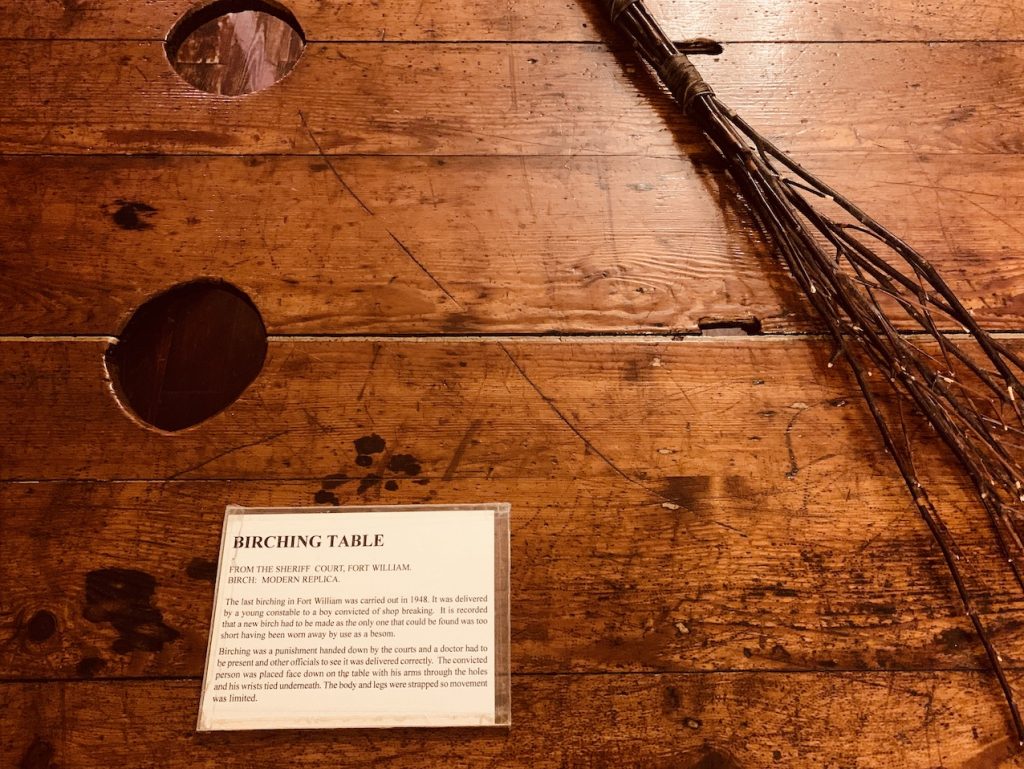 There’s also a section on crime and punishment. I found myself fascinated by this birching table. Birching was certainly a grim and humiliating practice. Basically, a warden directed the convicted person face down on the table with their arms through the holes. With their wrists, body and legs strapped, they’d then get thrashed with the wooden birch rod. Sometimes on the back and shoulders, usually on the ass. This corporal punishment was active in Fort William until 1948. 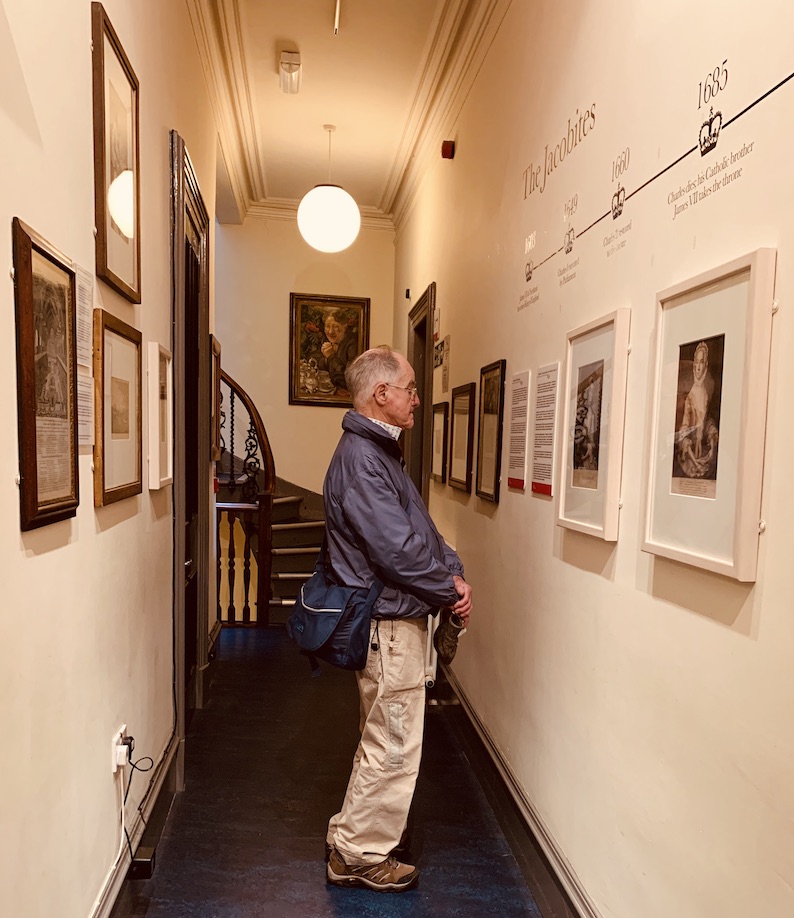 Admiring the art at the West Highland Museum.

There are plenty of antique sketches and paintings peppered around the museum depicting the region’s most iconic figures, landscapes and battles. 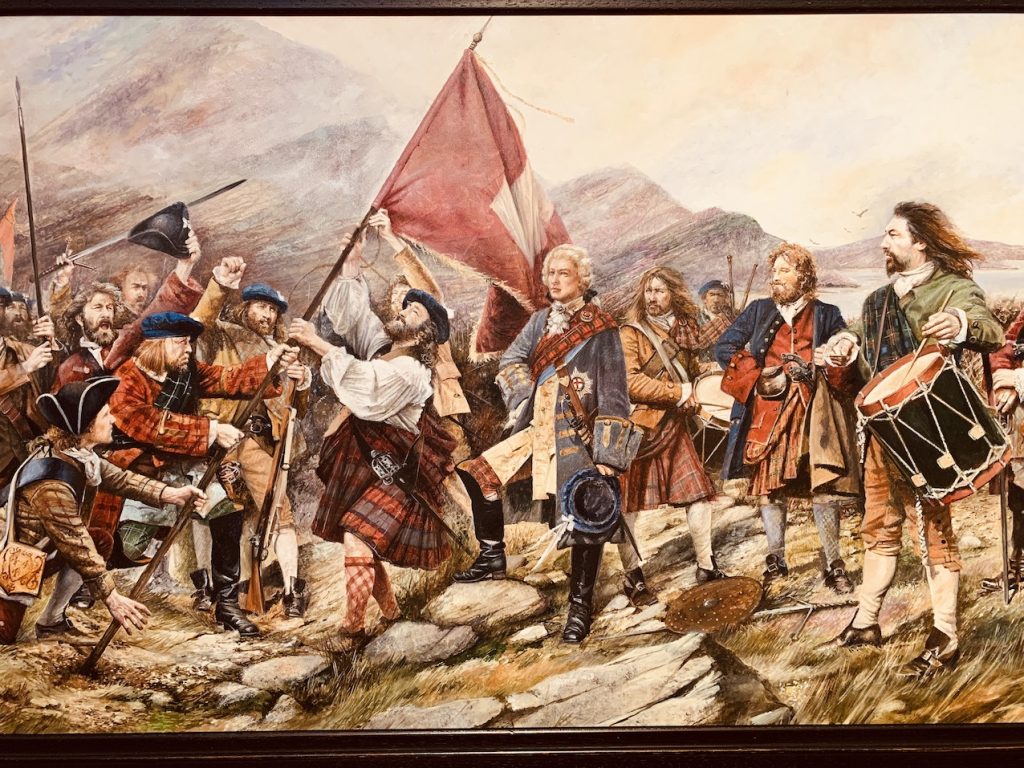 One that really caught my eye was the Raising of The Standard at Glenfinnan. The artist Chris Collingwood created this modern oil painting in 1997 by special commission for The Drambuie Liquer Company. It shows Prince Charles Edward Stuart in 1745 raising the Jacobite standard at Glenfinnan surrounded by the assembled clans. 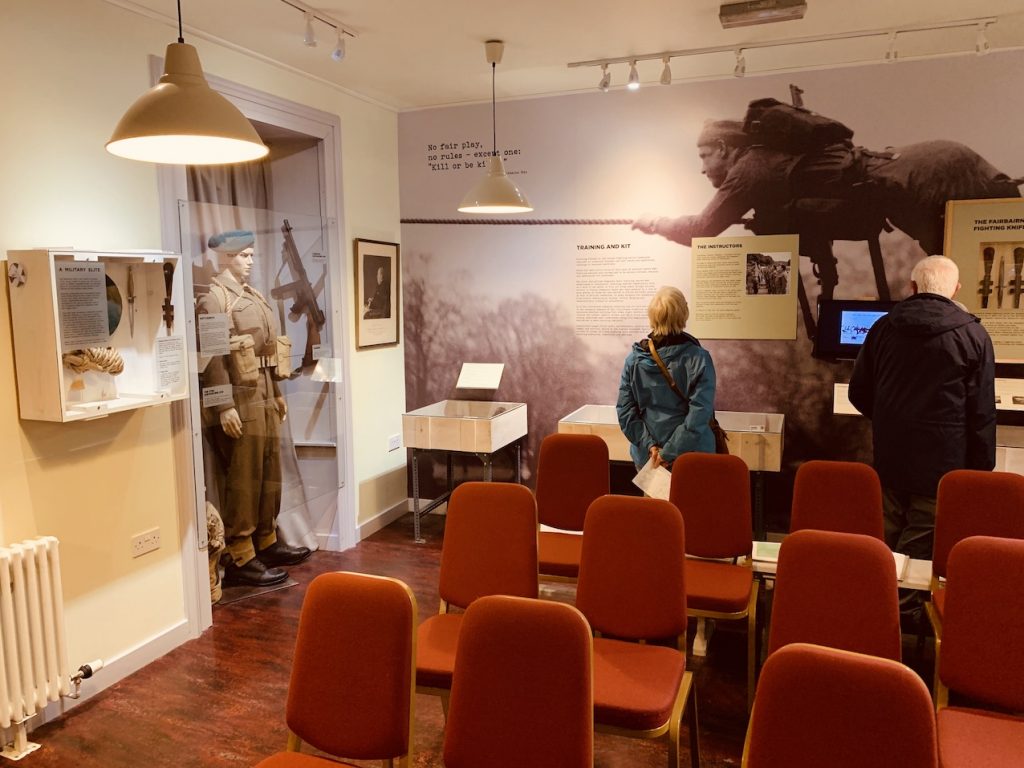 The Commando Room is a recent addition to the museum, having opened in 2012. This interactive exhibit tells the story of how Winston Churchill ordered the creation of an elite military fighting force during The Second World War. Subsequently, The Army opened a new training centre at the remote, West Highlands hamlet of Achnacarry. The centre was dubbed Castle Commando and by the time the war was over around 25.000 men had come here to take the gruelling six week course. Those who passed became a British Commando and received a prestigious green beret. 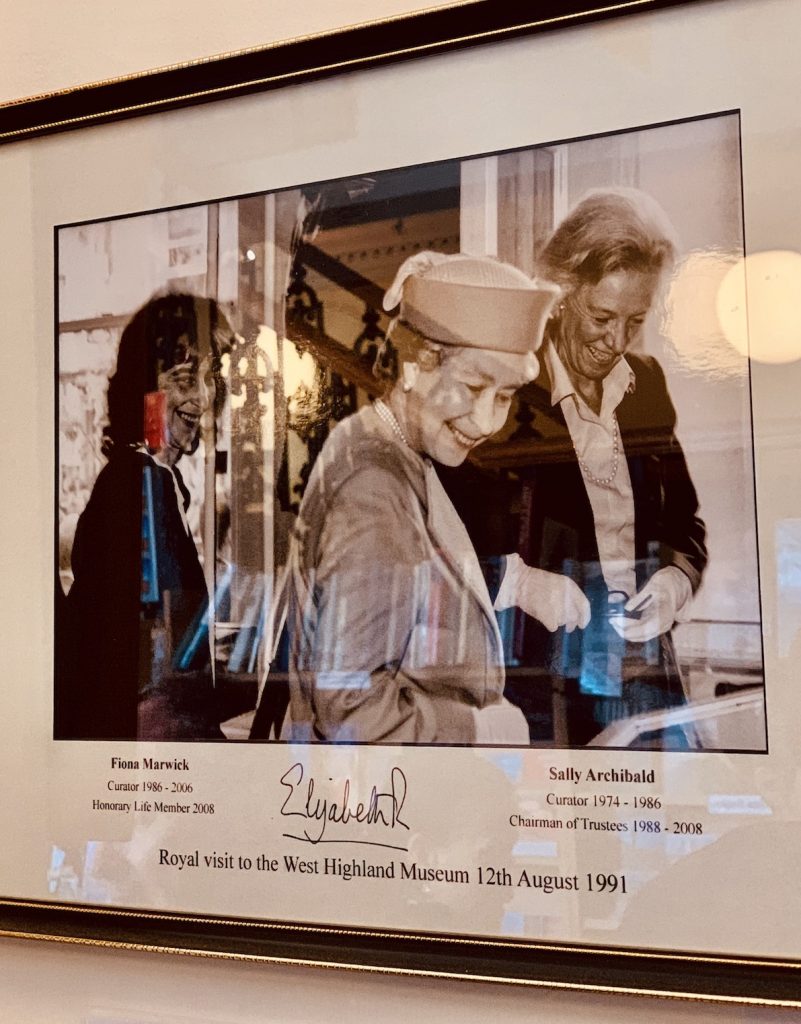 Finally, on your way out, keep an eye open for this framed photograph commemorating Queen Elizabeth II‘s visit here in 1991. The Queen even signed the photo, which they keep right by the main door. For more on West Highland Museum, check out their website.