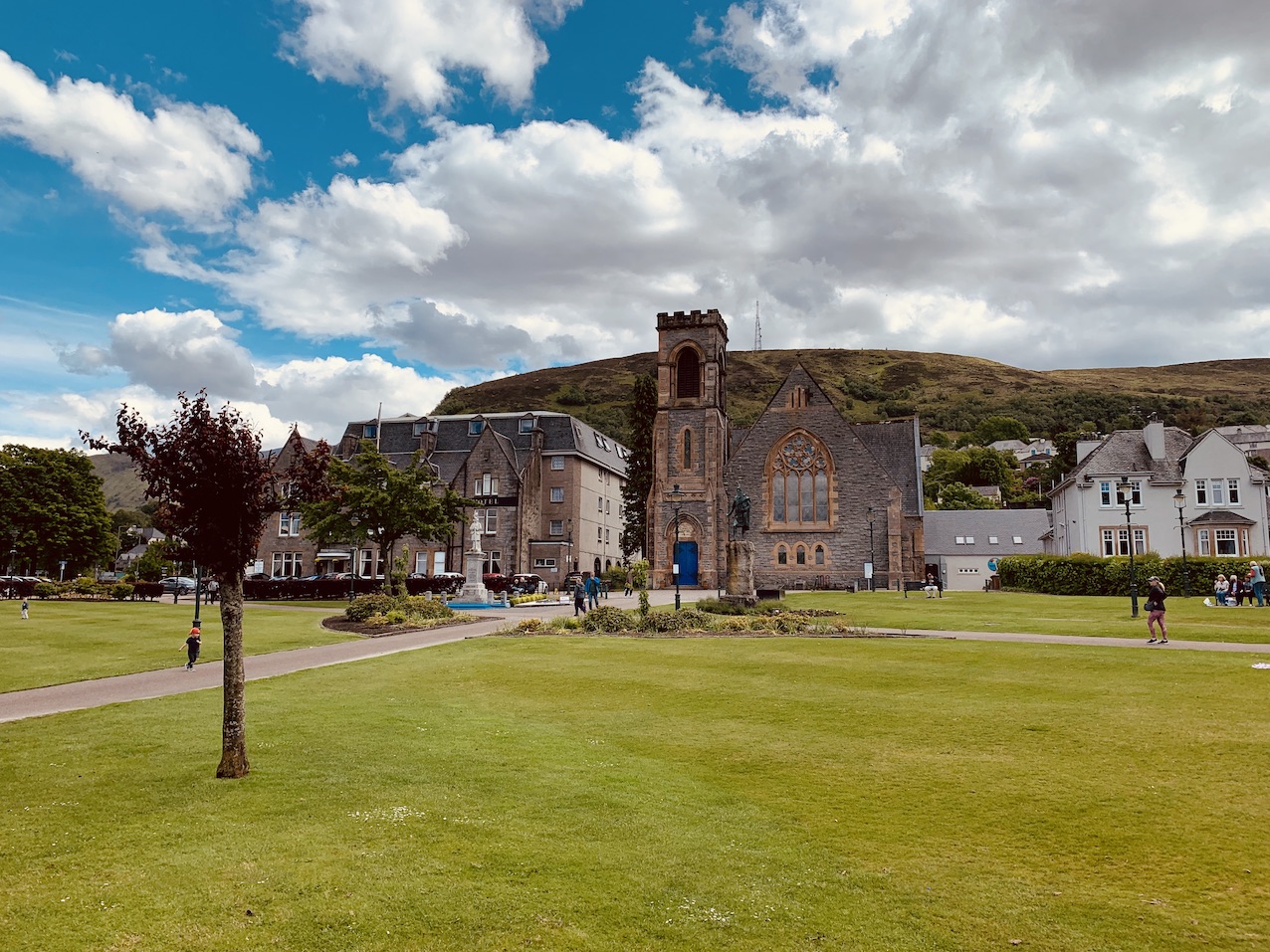 May 2019. Poor old Fort William. As a town it’s always had a bad rap. And for the most part, it only has itself to blame. I’ve always wondered why the town is so uncompromisingly grey and neglected. And why it falls so short in terms of sights, stores and general services.

After all, this is the gateway to some of the most dramatic scenery of The Scottish Highlands. In fact, Fort William Town Centre proved so uninspiring during all my visits to Lochaber that I never really bothered to properly explore it.

But then, over fifteen years from my first visit, it was high time to investigate and see if I’d maybe done the place a disservice. I started my journey here at Parade, a well-kept public park and entrance point to Fort William High Street. 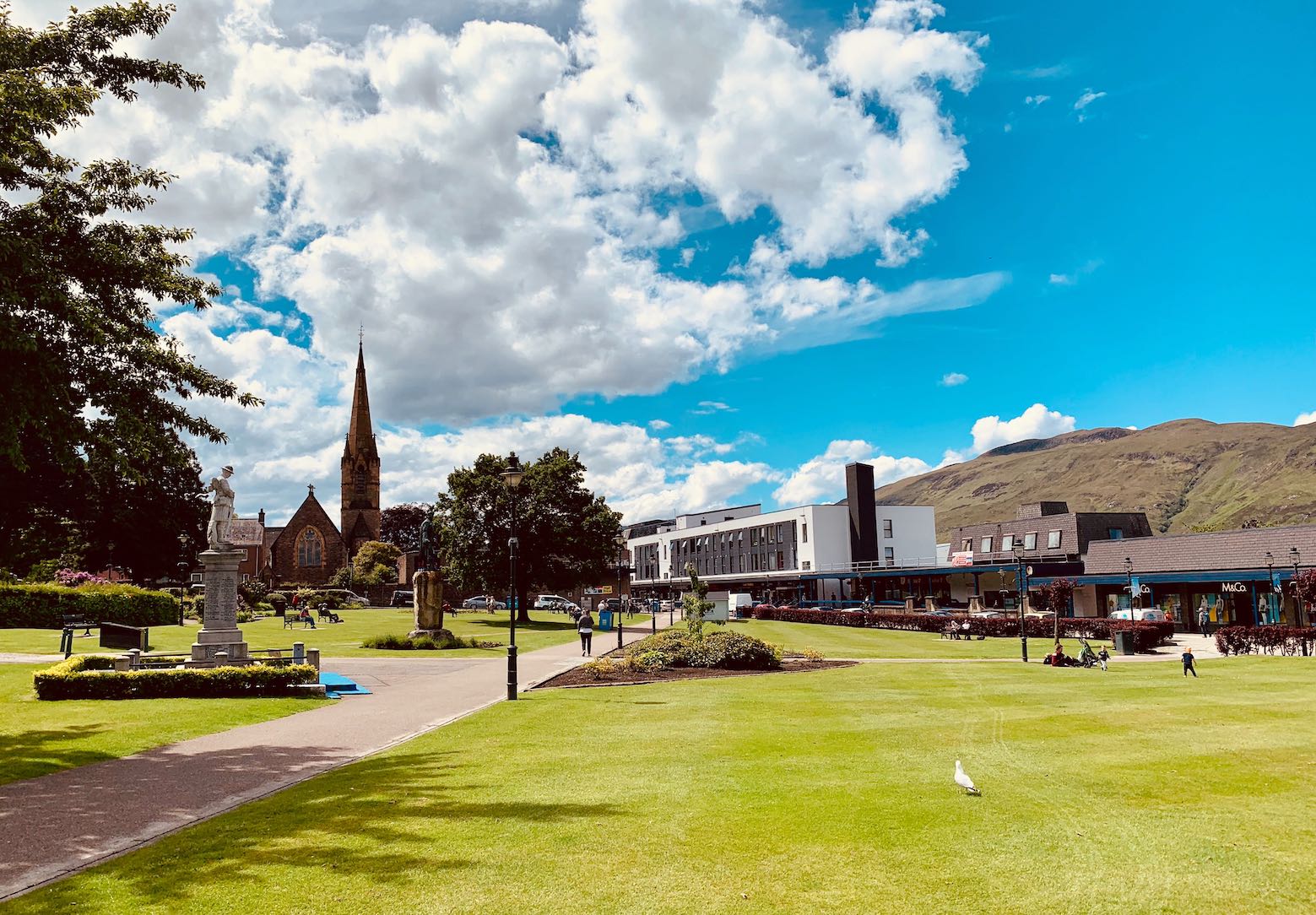 The first thing that came to mind on this May afternoon was wow, everything looks better in the sunshine. In all too rare weather like this, Parade is a lovely place to sit and watch the world go by. 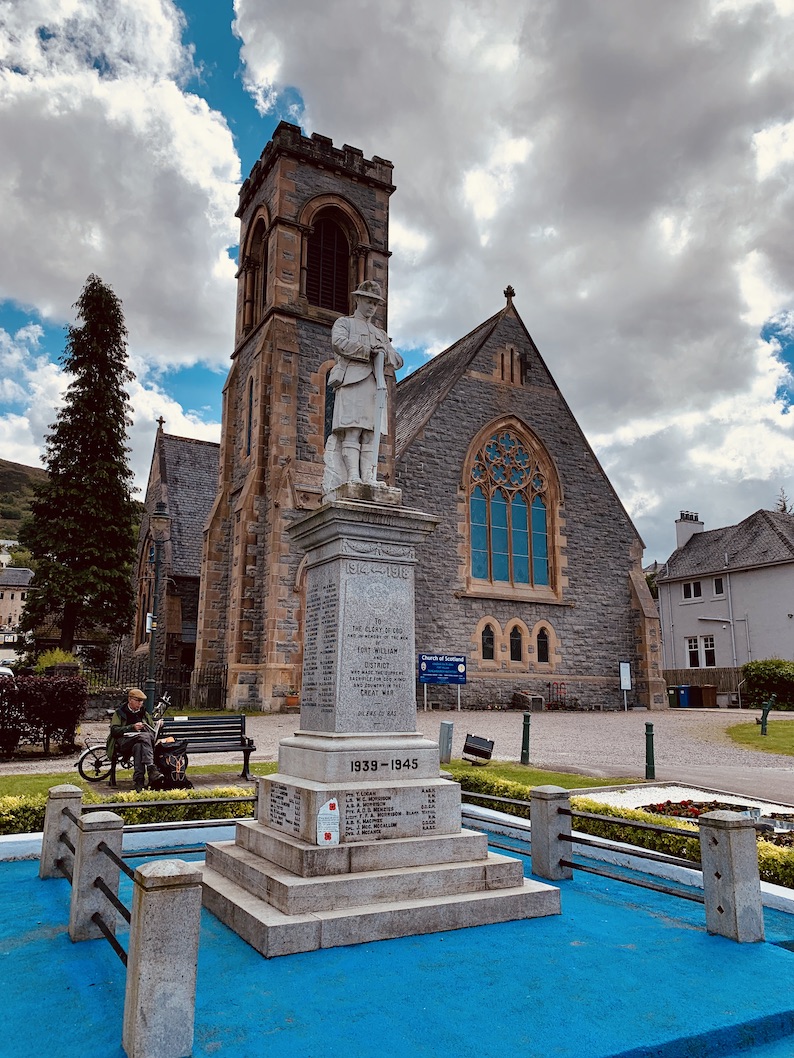 The park is dominated by Duncansburgh MacIntosh Parish Church and The Fort William War Memorial. The statue honours the sons of Fort William who lost their lives in World War I, World War II and The Gulf War. For a full rundown of the soldiers remembered here, head to rollofhonour.com. 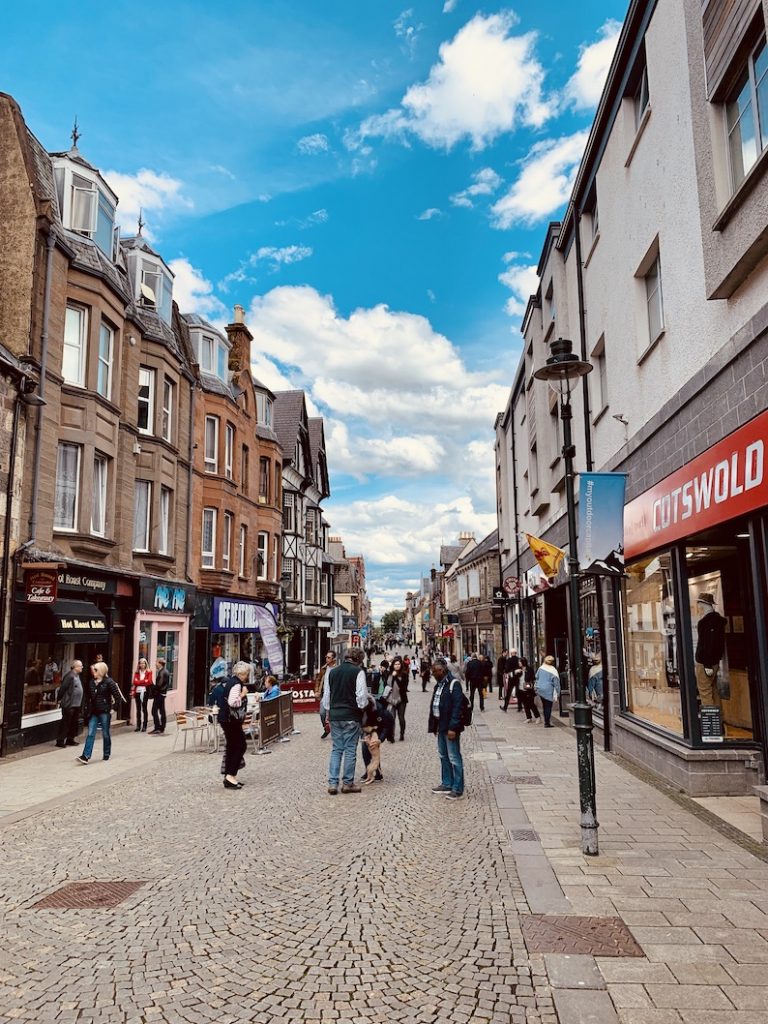 Ah, Fort William High Street. The scene of… not very much. If you’re looking for mountaineering equipment, kitschy souvenirs and charity shops, this is certainly the place for you! If you’re not, expect to be largely underwhelmed. Having said that, it’s nice to see a fully pedestrianised high street and it is a decent area for food and drink. 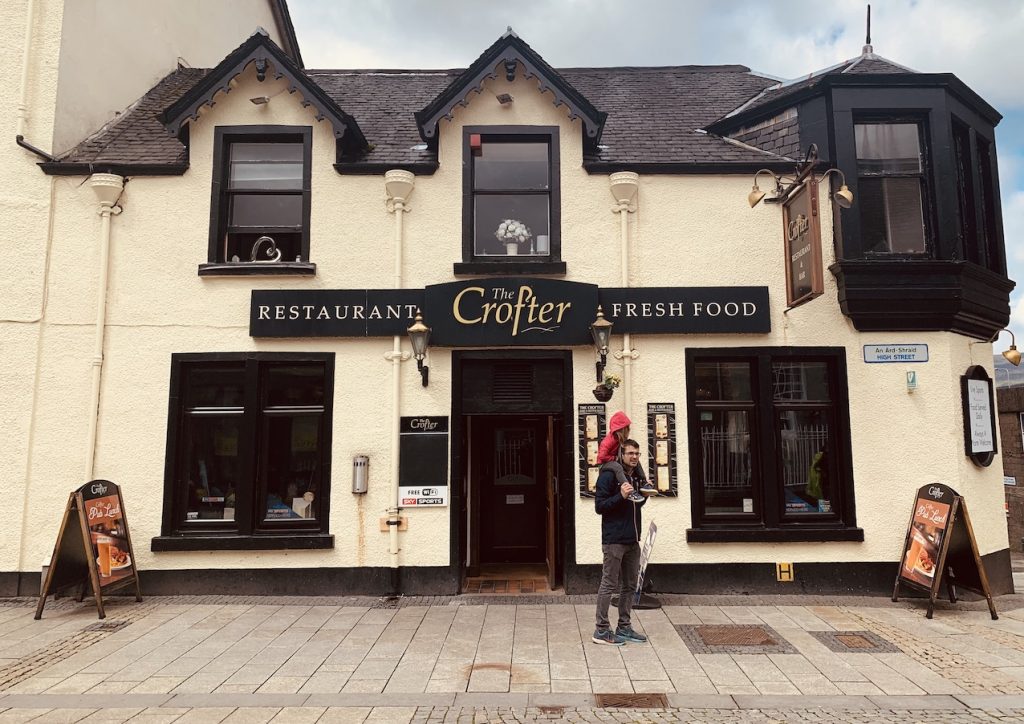 The Crofter Pub and Restaurant.

My choice breakfast spot on Fort William High Street is The Crofter. This pub/cafe/restaurant does it all, from coffee, fried breakfasts, homemade soups and staple pub grub, to meal deal evenings and curry and a pint nights. 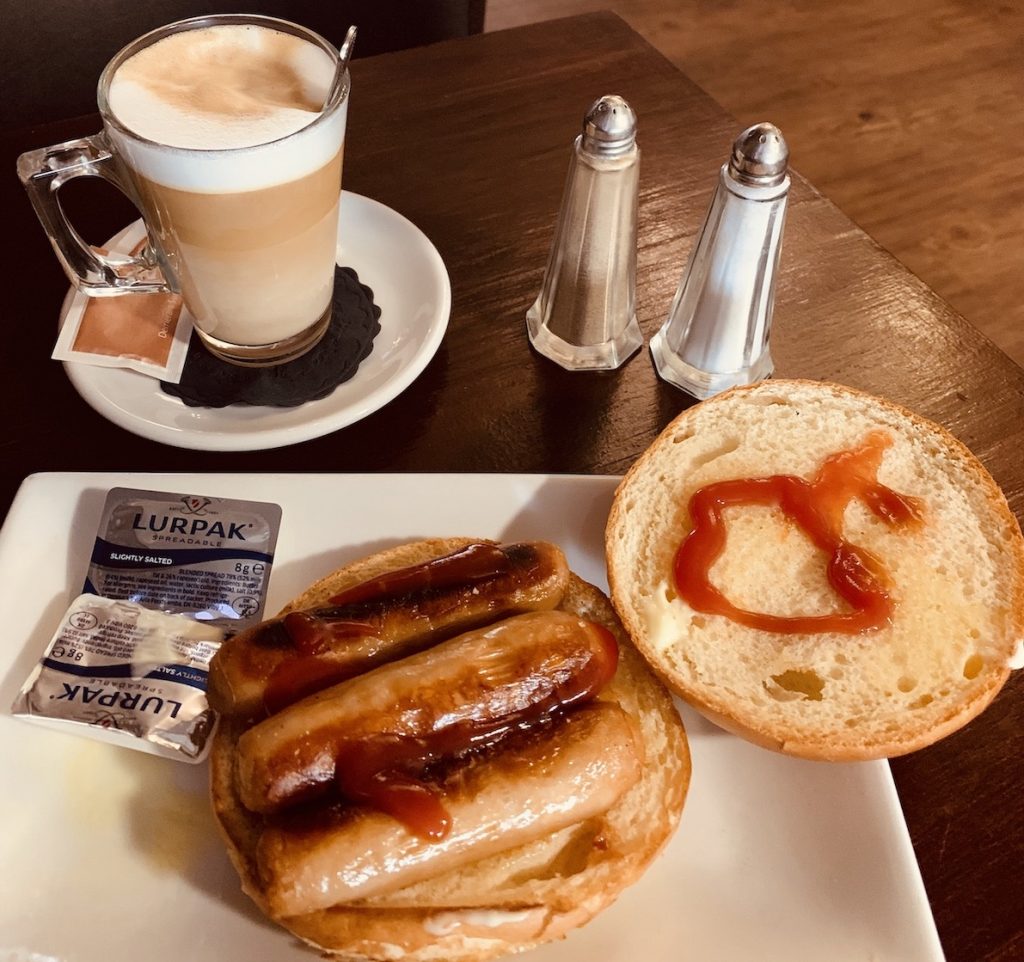 A “typically healthy” Scottish breakfast at The Crofter.

Mornings at The Crofter are right up my street. For the most part it’s really quiet and the coffee is great! Moreover, the service is friendly, the Wifi is strong and I just can’t resist their filled rolls. Sometimes with bacon and egg, usually with sausages. 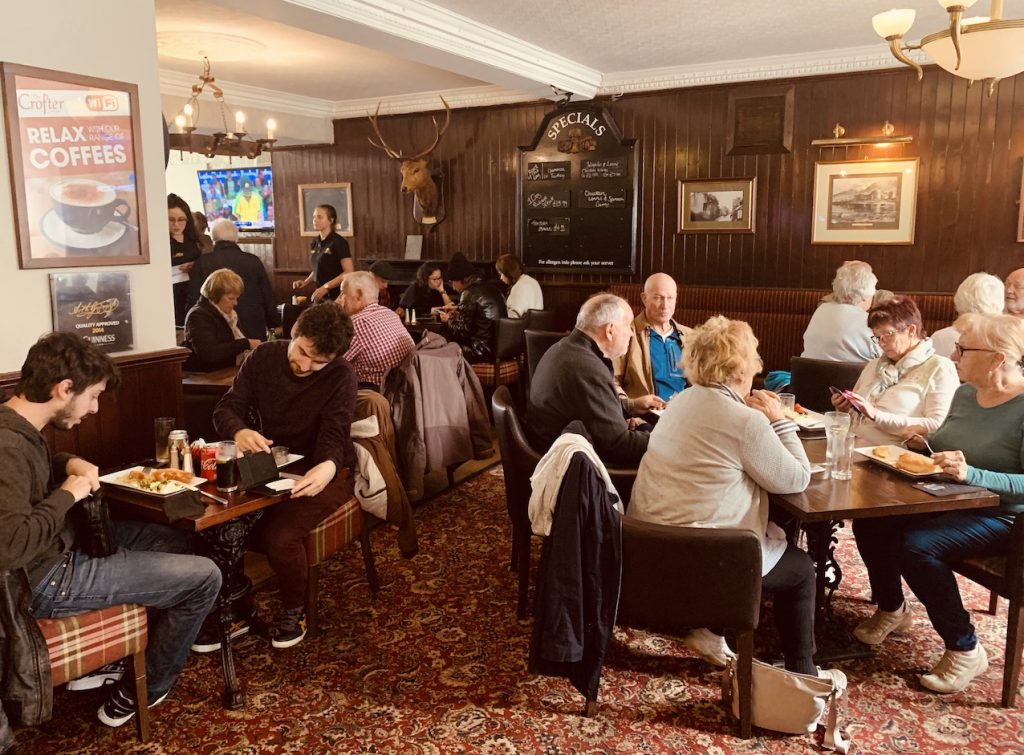 The Crofter during the lunch time rush.

In such conditions I could easily stay all day for an extended spell of blogging. However, the lunch time rush always sends me packing when the tourists literally flood in! 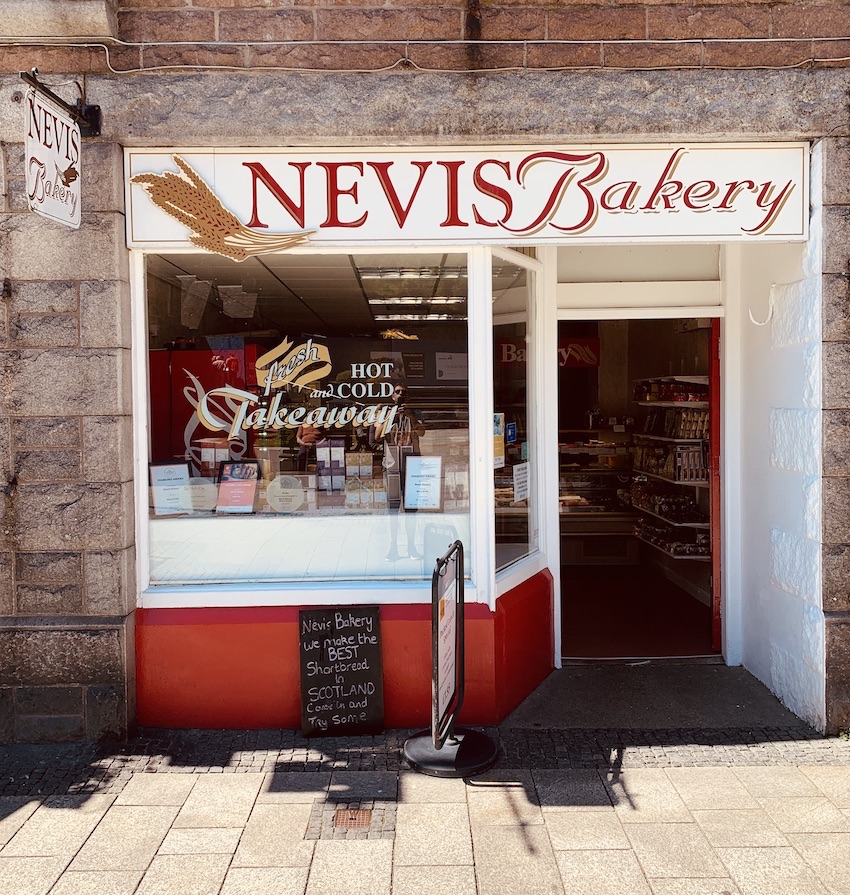 If you prefer to grab a cheap bite while you stroll, look no further than Nevis Bakery. This tiny store offers up award winning pastries, pies, cookies, shortbread and oatcakes. Their production centre is in the nearby village of Corpach, but they operate right out of Fort William High Street.

What To See & Do, Fort William. 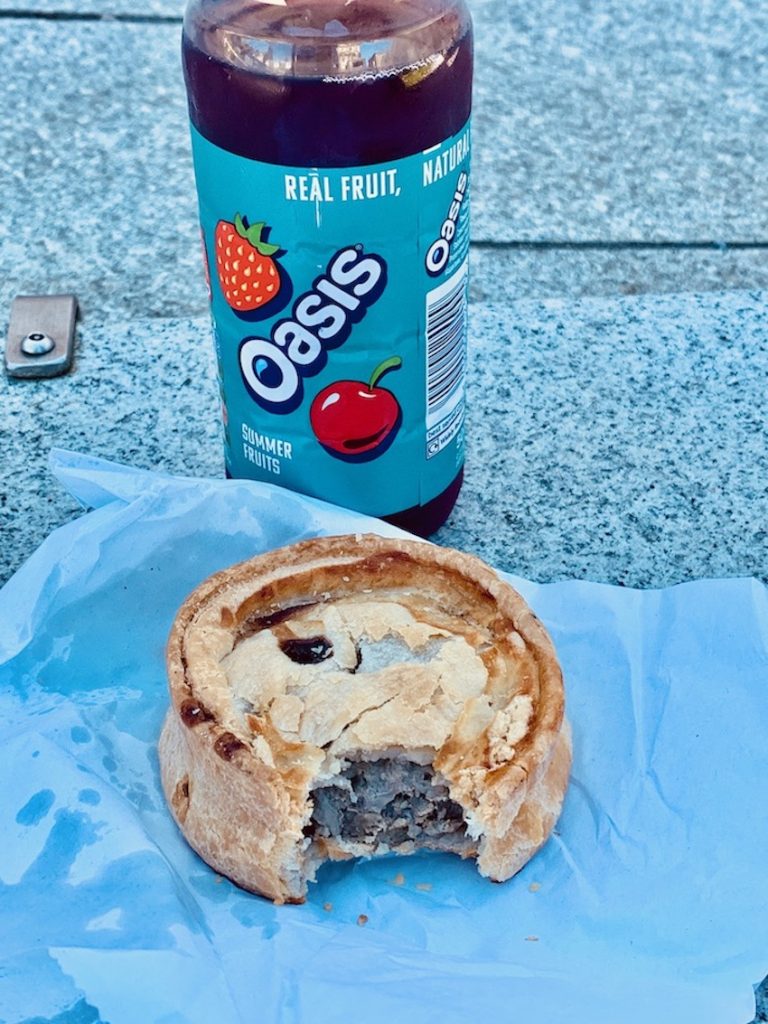 Whatever you end up grabbing, you can saunter over to Cameron Square opposite the bakery and devour your purchase on the stone benches. The square is also home to the brilliant and free to enter West Highland Museum. 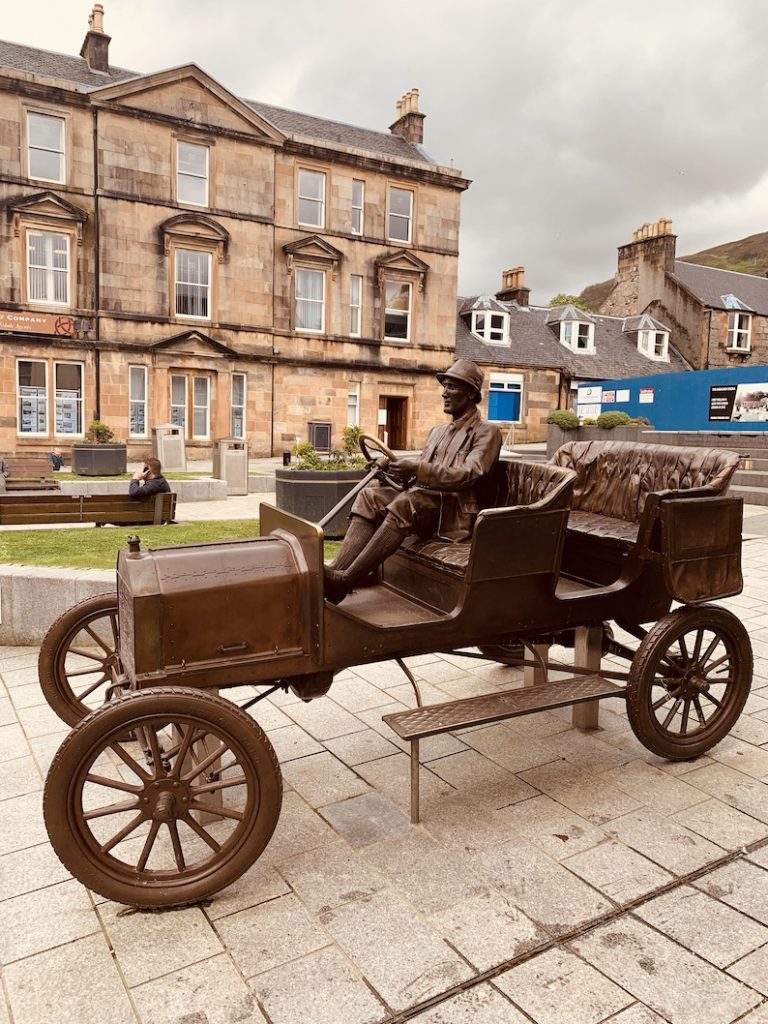 The Bronze Ford on Cameron Square.

While you’re on Cameron Square, take a moment to admire The Bronze Ford. The sculpture celebrates the achievement of Mr. Henry Alexander, who scaled Ben Nevis in his model T Ford! Setting off from the square on May the 9th 1911, it took him nine days to get up the mountain and back down to the town centre! 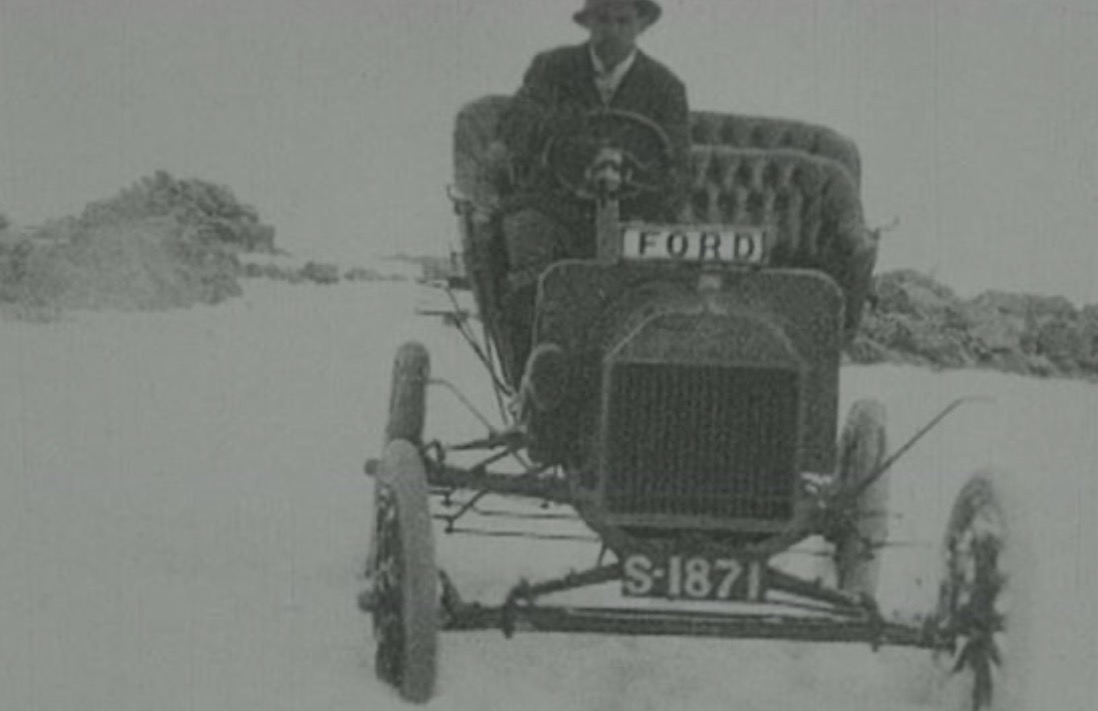 It was actually a publicity stunt from Alexander, Scotland’s first Ford dealer. Local authorities unveiled the statue in May 2018, an undeniably charming addition to the town centre. 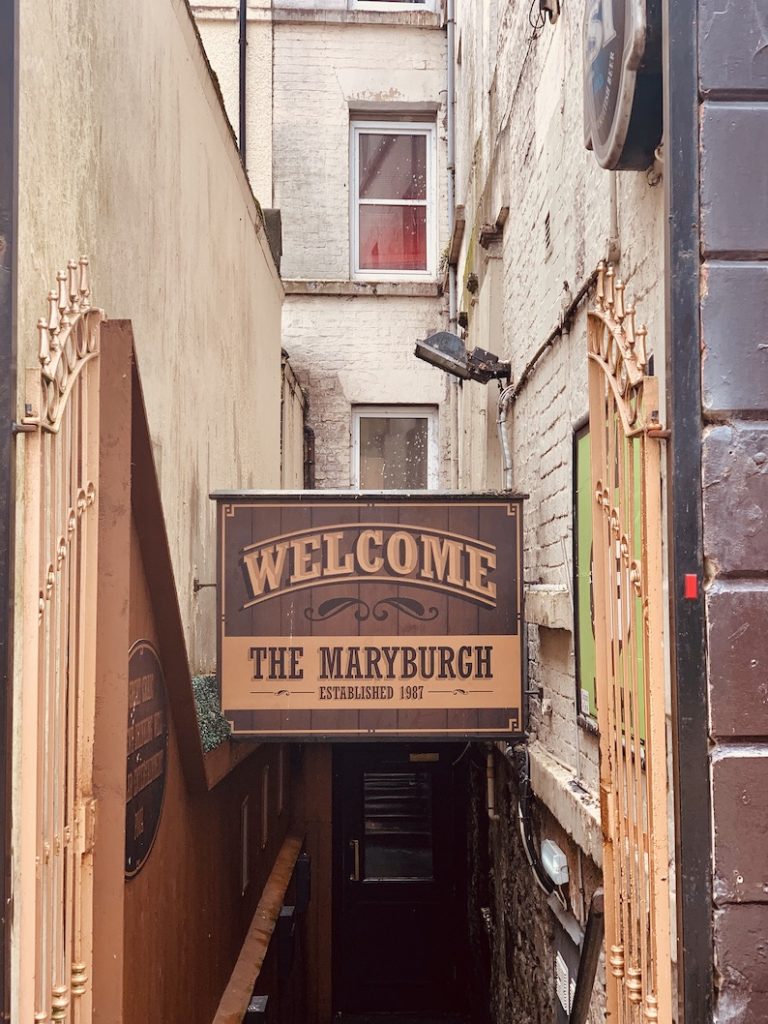 Fort William is… how can I put this… a drinking town! In fact, there are more pubs here than useful shops. I’ve never been much of a drinker, but I do recall a fun night at The Maryburgh Inn many years ago. I was out with my sister and her husband and we ended up kicking a local guy’s ass at pool. Then, after one beer too many, I “treated” everyone to a karaoke rendition of Blur’s Song 2. 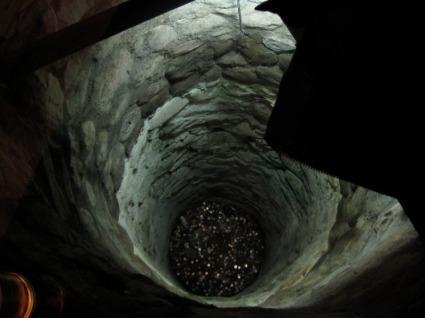 An interesting feature of The Maryburgh is that it has a giant well right in the middle of the main floor. Of course you have to make a wish and drop a coin onto the glistening collection at the bottom. There’s a glass cover now apparently, which reduces the thrill somewhat. I also read that they added a kitschy skeleton. Mm. 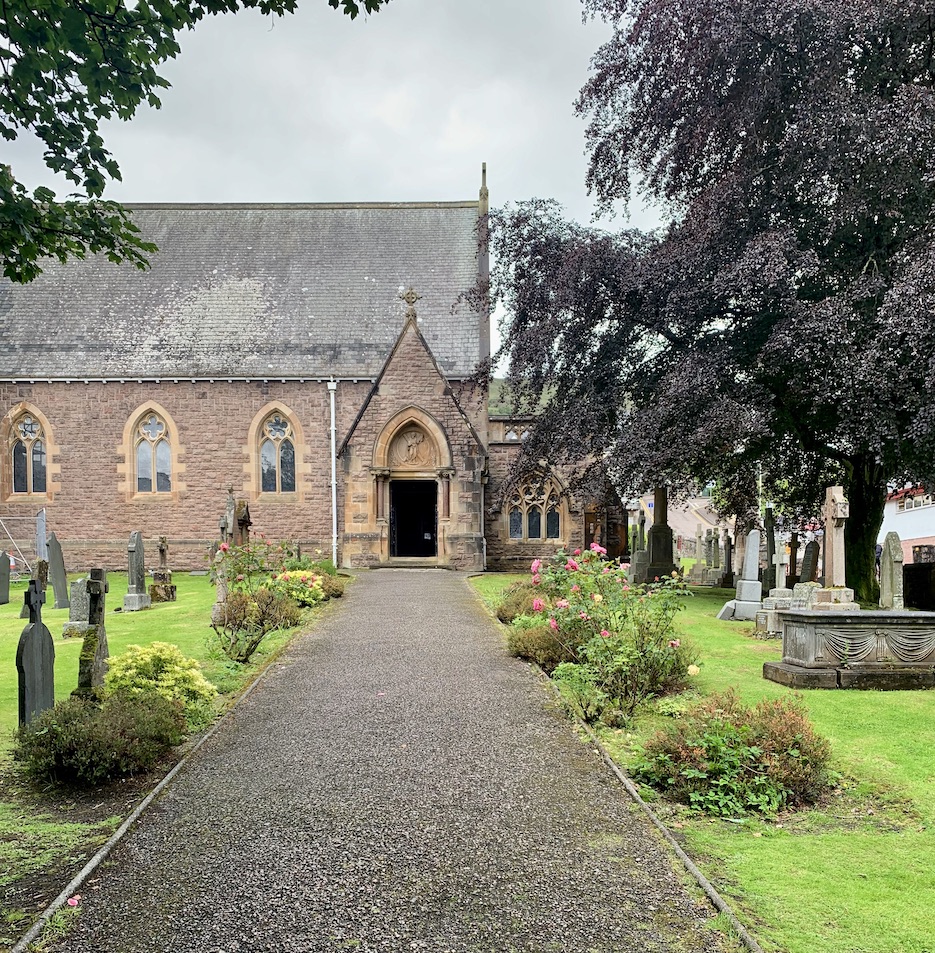 Fort William’s prettiest church, St. Andrew’s, is another feature of The High Street. It’s well worth a look, even just to walk through its lovely garden and graveyard. 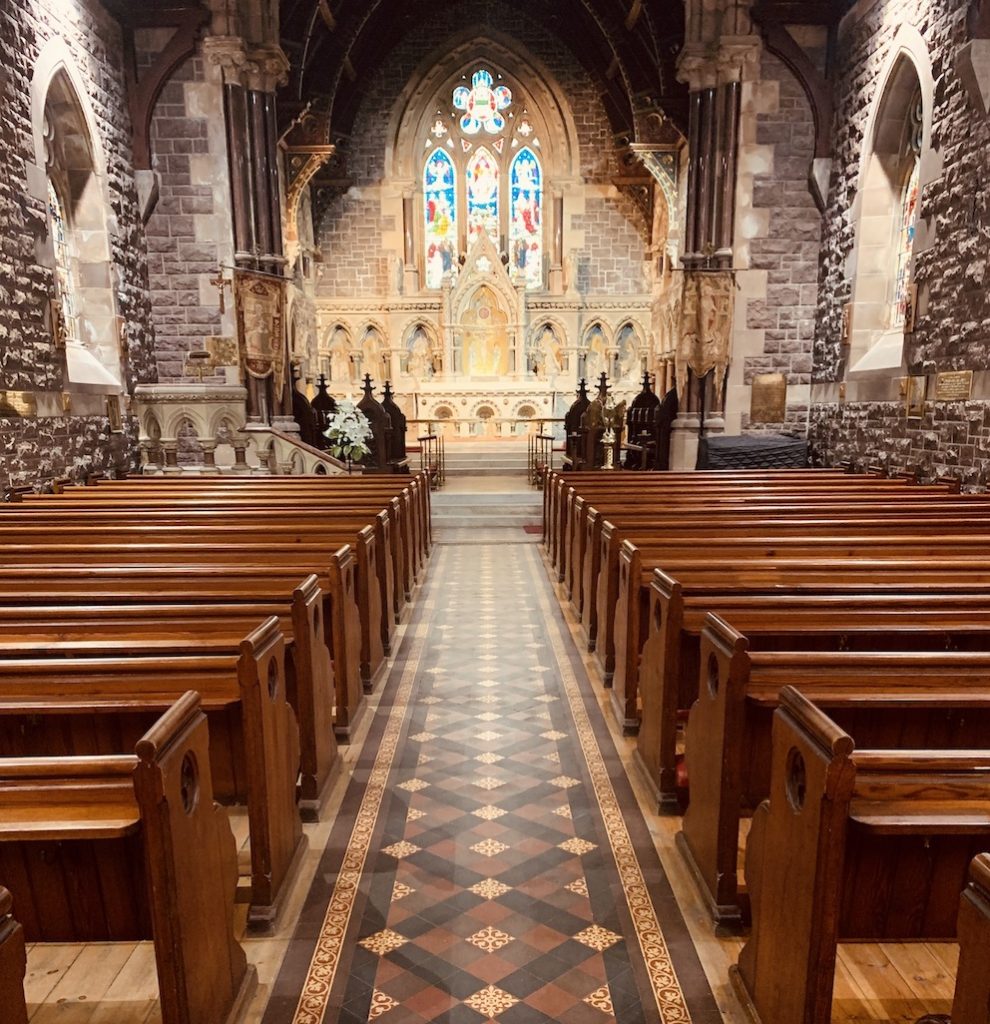 The current building dates back to 1876 when it was built by George Baynton Davy, who made his fortune in the fertiliser industry. It’s certainly a handsome structure, with its Caen stone walls and Connemara marble pillars. 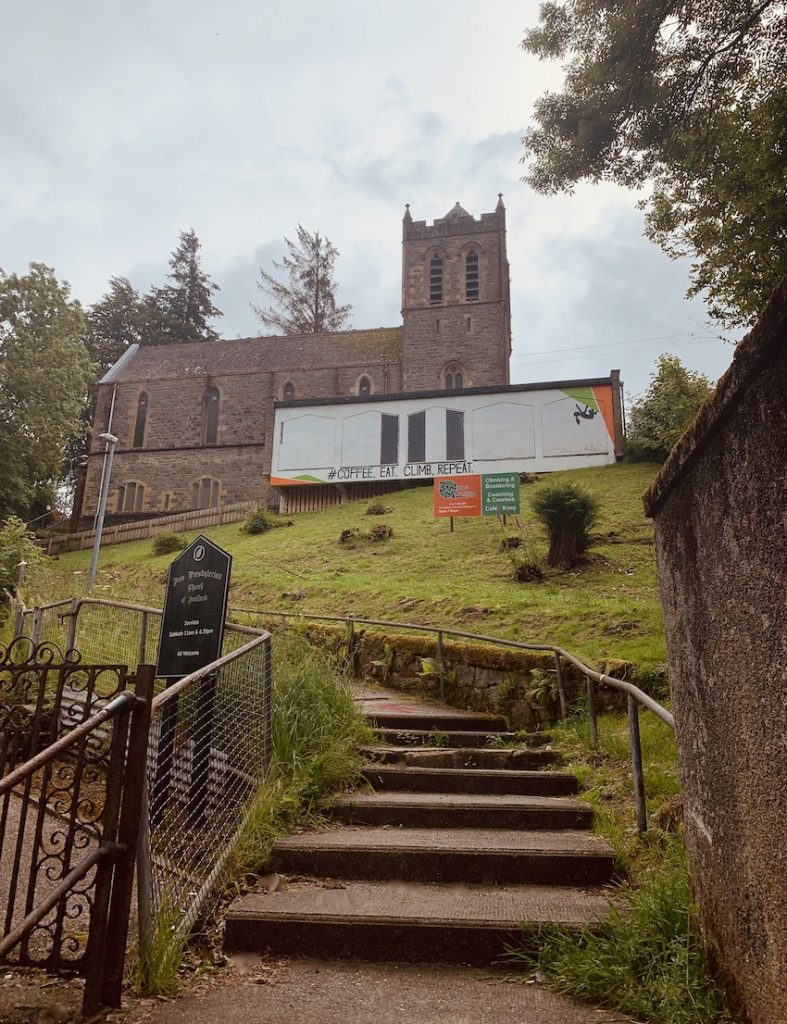 Another church in town ended up packing quite the surprising punch! Following the steep stone staircase up to its entrance, I had no idea of the revelation that awaited me at the top…. 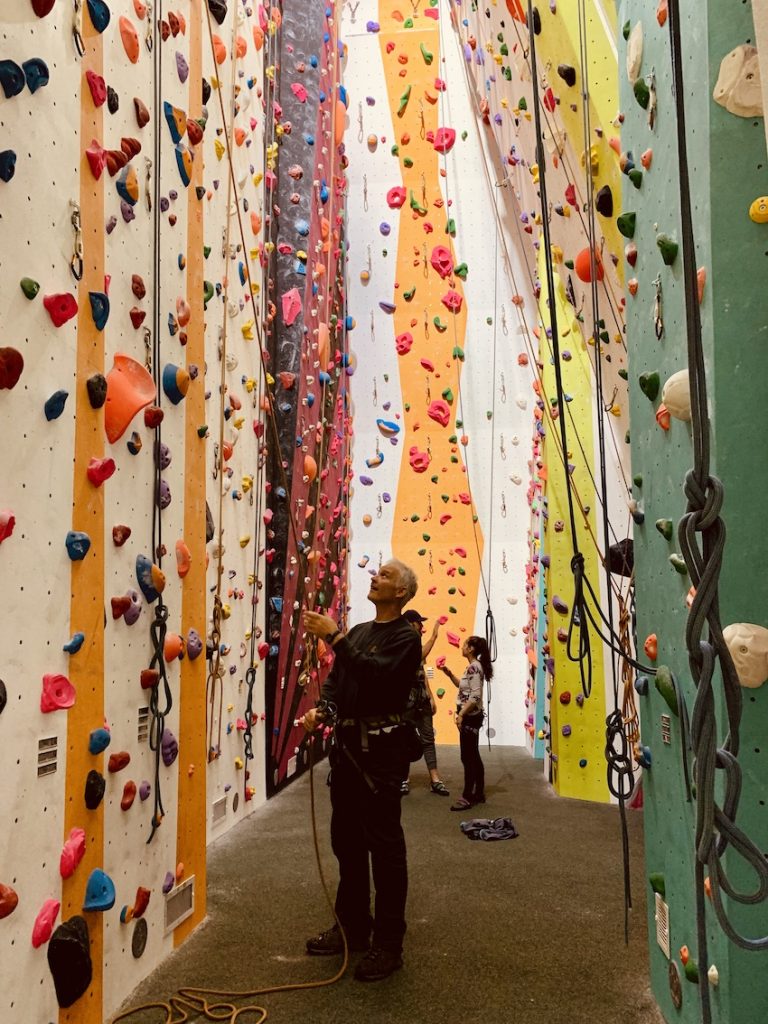 Basically the church… isn’t a church. It’s now home to 3 Wise Monkeys Climbing, an indoor adventure centre. They opened in 2016 after an ambitious project inside the former MacIntosh Memorial Church. 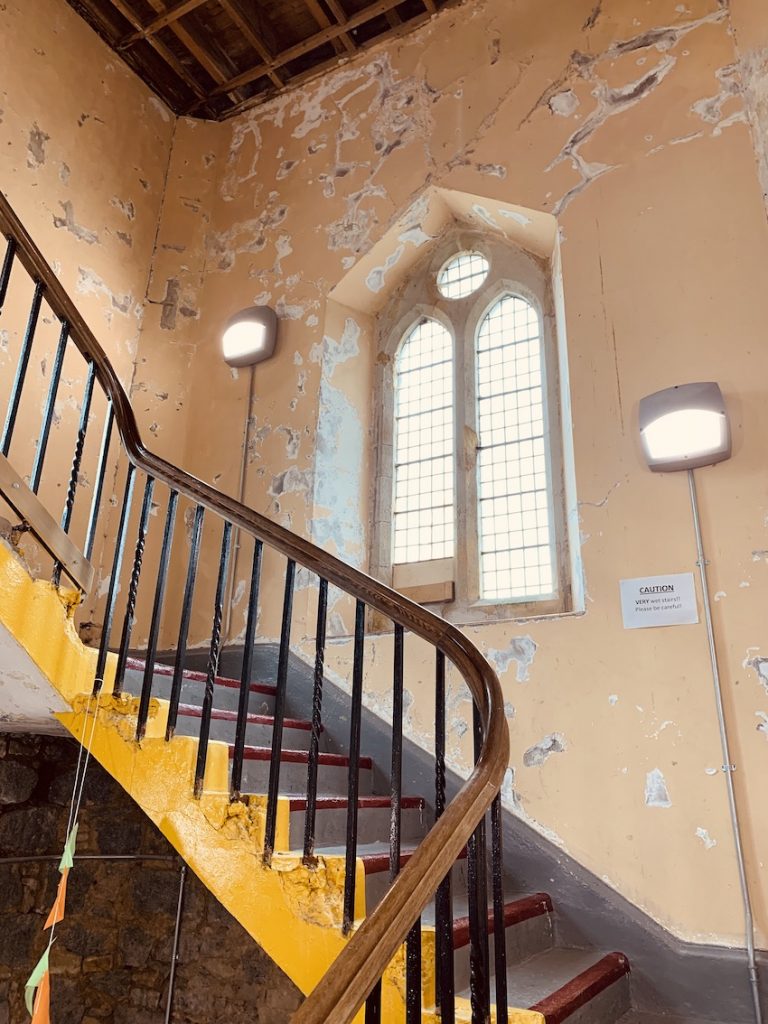 No interest in climbing? That’s fine, just come for a look and make your way up the stairs for a coffee in the 3 Wise Monkeys Cafe. I do hope they get round to giving the stairwell a lick of paint at some point. Maybe a mural of some kind honouring the old church? 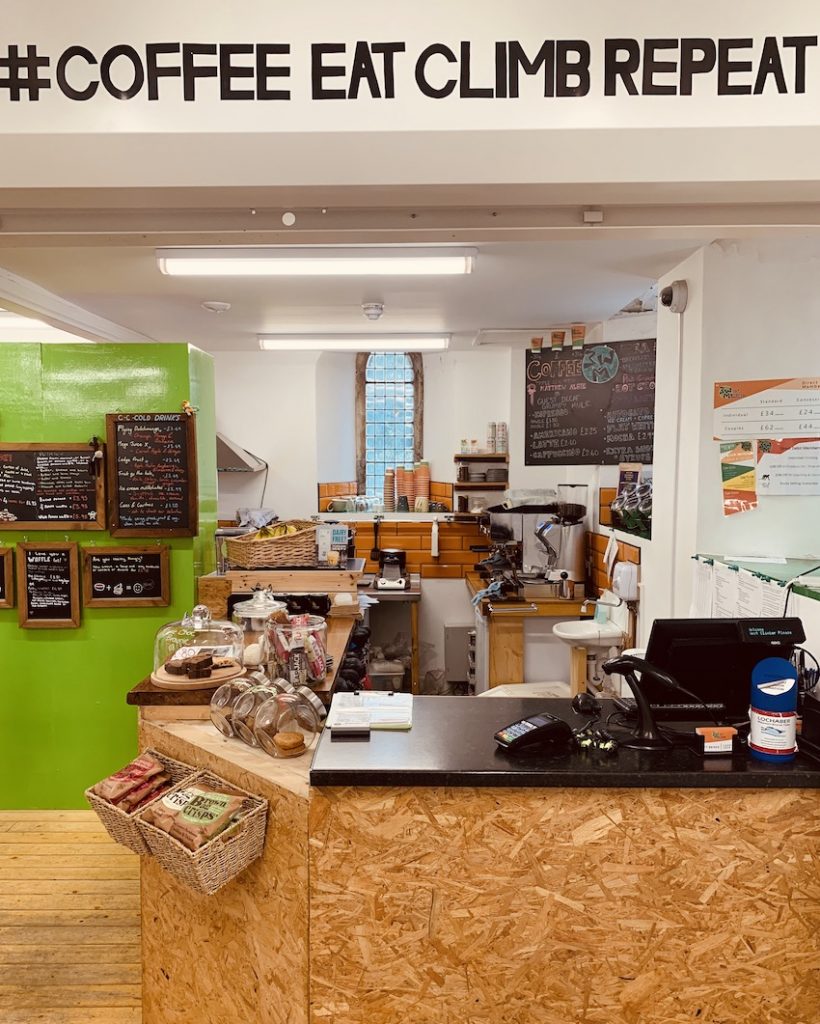 In any case this is a wonderfully secret and peaceful spot for a cuppa, even a spot of lunch. Which is great in a town where the cafes are usually bursting at the seams. 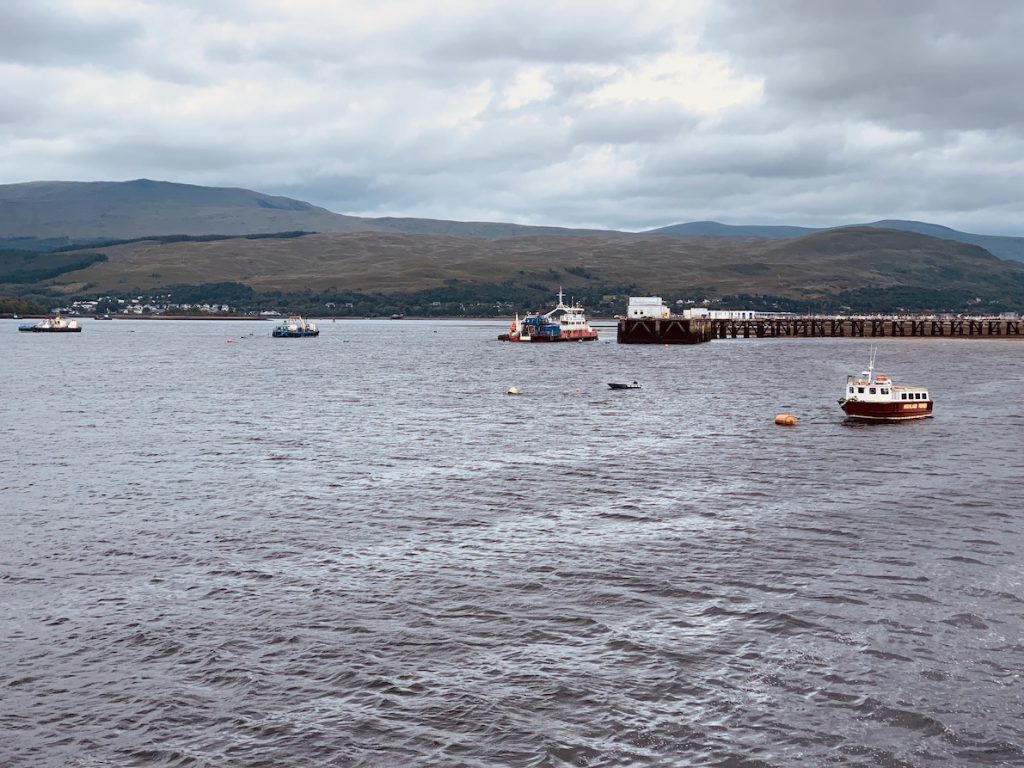 Any wander around Fort William Town Centre should include some time down by the edge of Loch Linnhe. Even better, why not take a boat tour with Crannog Cruises. This is something I’ll definitely be doing the next time I’m in town. 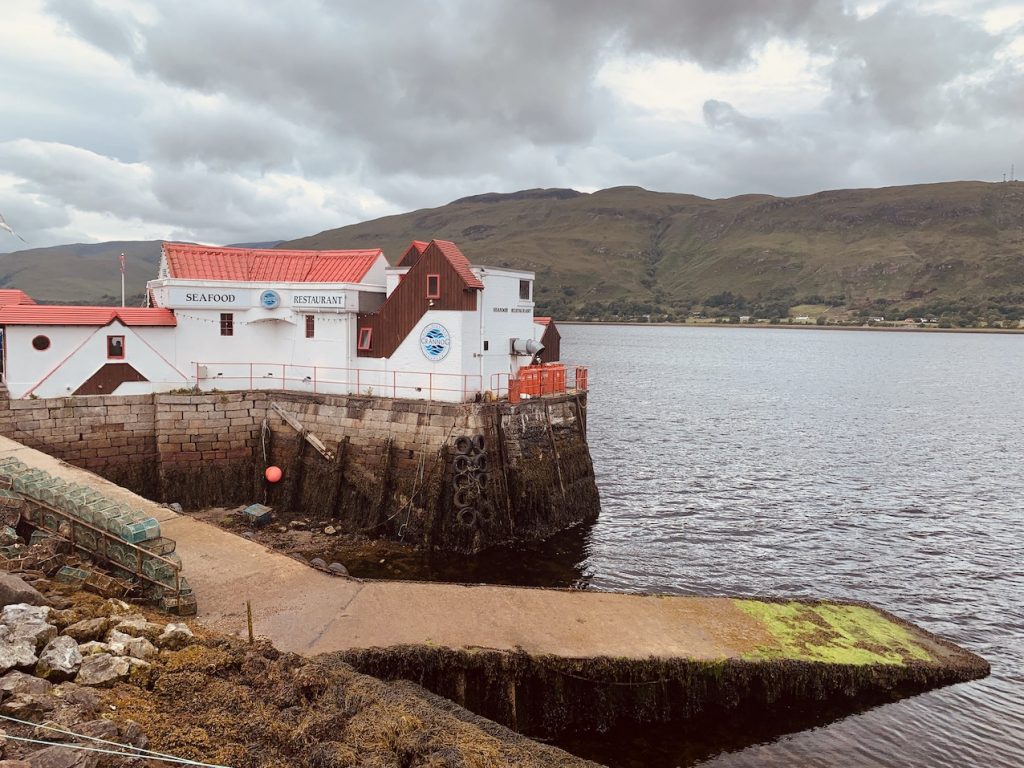 Their boat tours leave from Fort William Pier, where you can also find Crannog Restaurant. If you’re into seafood this is one of the best options in town. They’re open seven days a week and when it comes to dinner with a view, this ticks all the boxes!