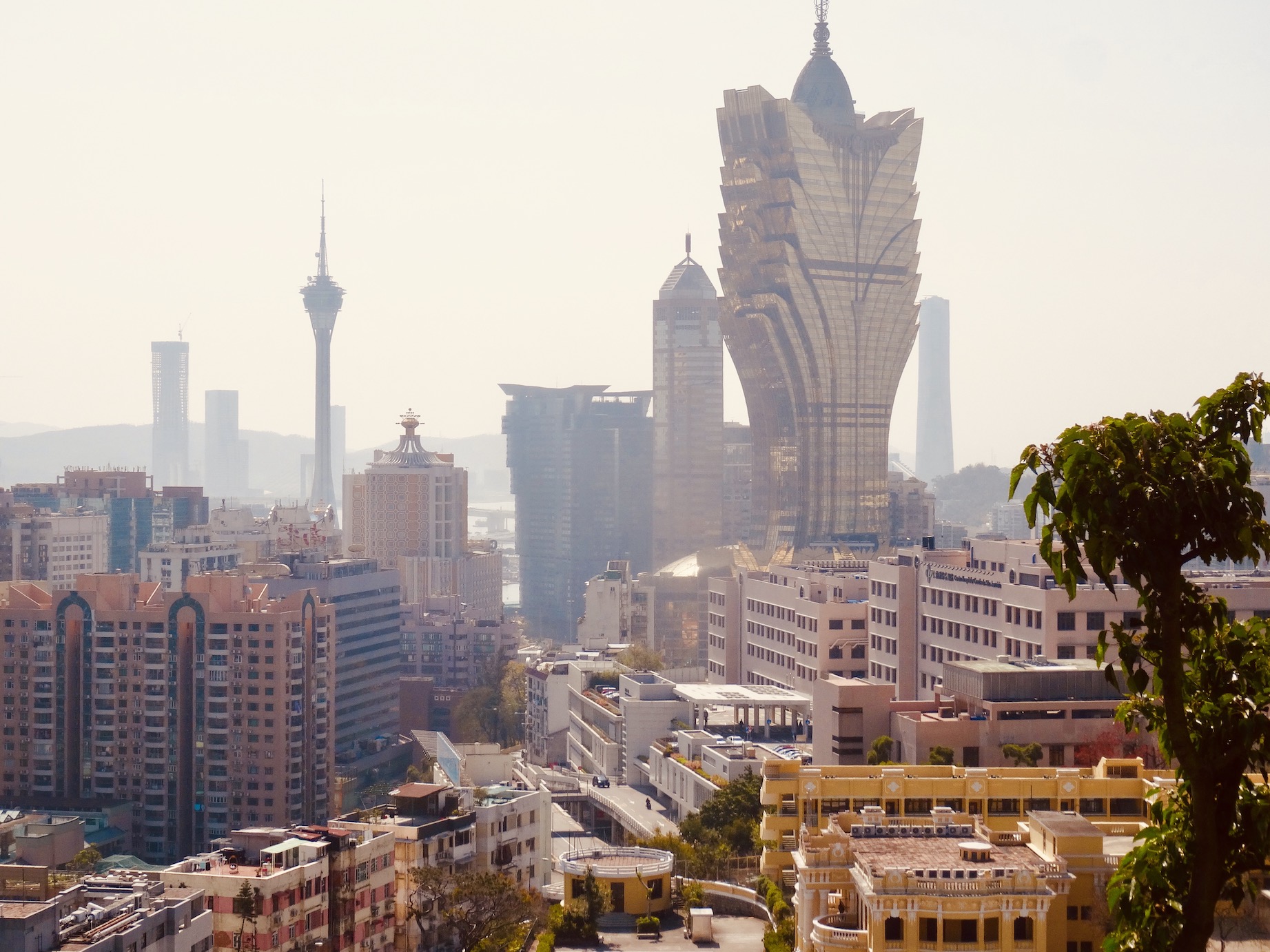 February 2018. If there’s a definitive symbol of Macau, its’ got to be the ubiquitous form of The Grand Lisboa. With its iconic golden, lotus-shaped tower, you simply can’t miss it. In fact, wherever you go in Macau, chances are this iconic building is just a glance away. I took this shot from the winding garden paths of Monte Fort. 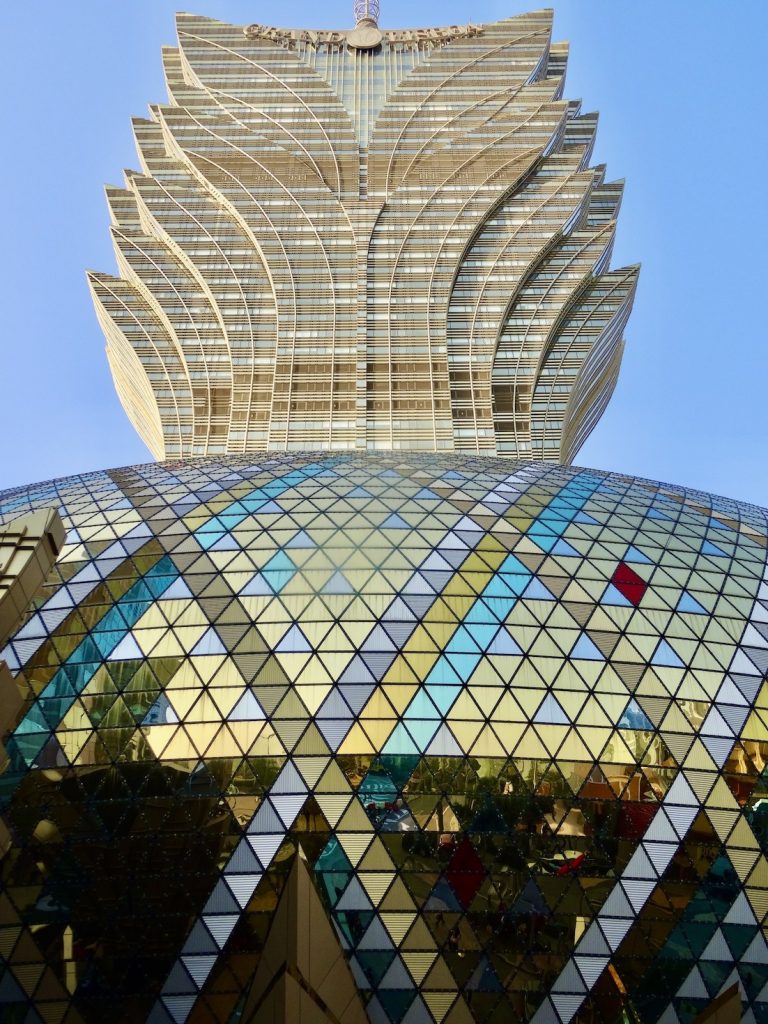 Wonderboy and I had to pass the hotel every day as we ran around the city on our explorations. Opened in 2008, it stands as Macau’s tallest building at 261 meters. 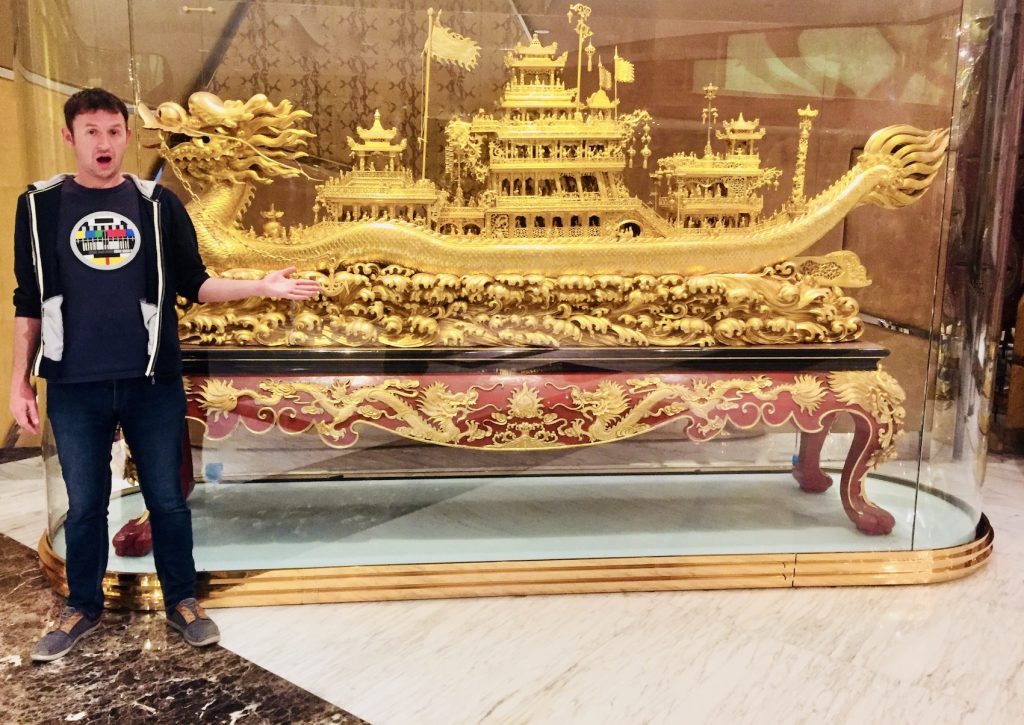 As with all of Macau’s monster hotels, the main lobby seems to be little more than an exercise in how much ridiculously lavish crap can we show off? If this can be considered some kind of competition, The Grand Lisboa really holds its own. As seen with this mental, pure gold dragon boat. 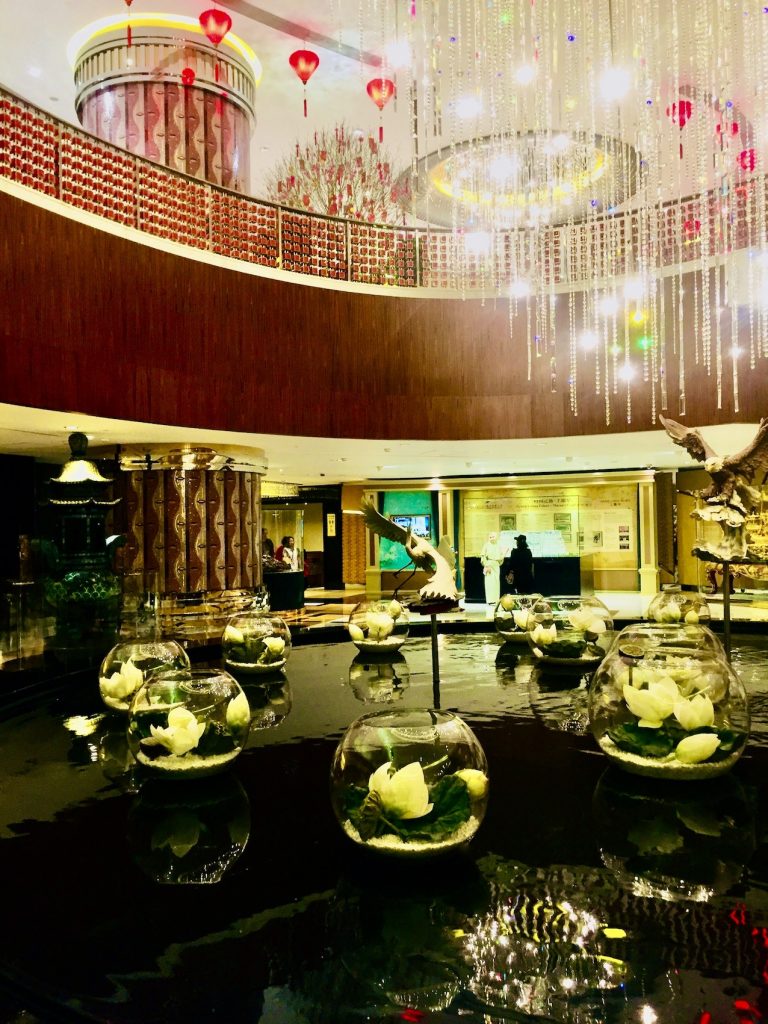 Elsewhere throughout the wondrous lobby, look out for a variety of jade sculptures and a giant pond with floating, flower-stuffed fishbowls. 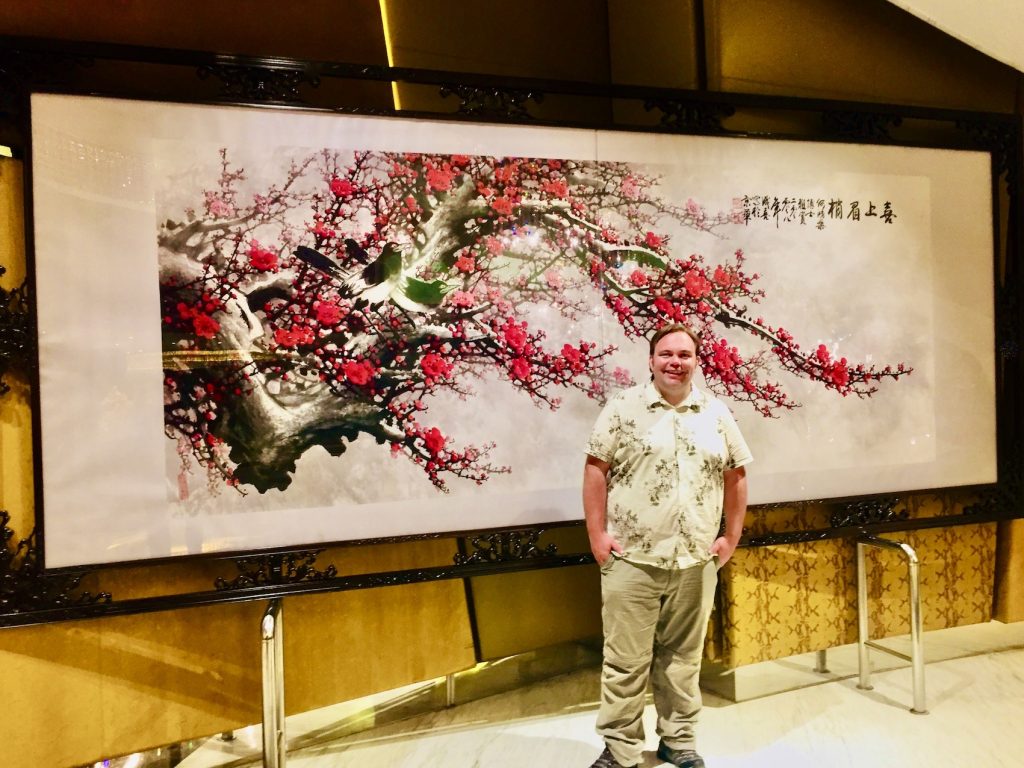 There are also a number of original paintings and sketches by renowned Chinese artists. 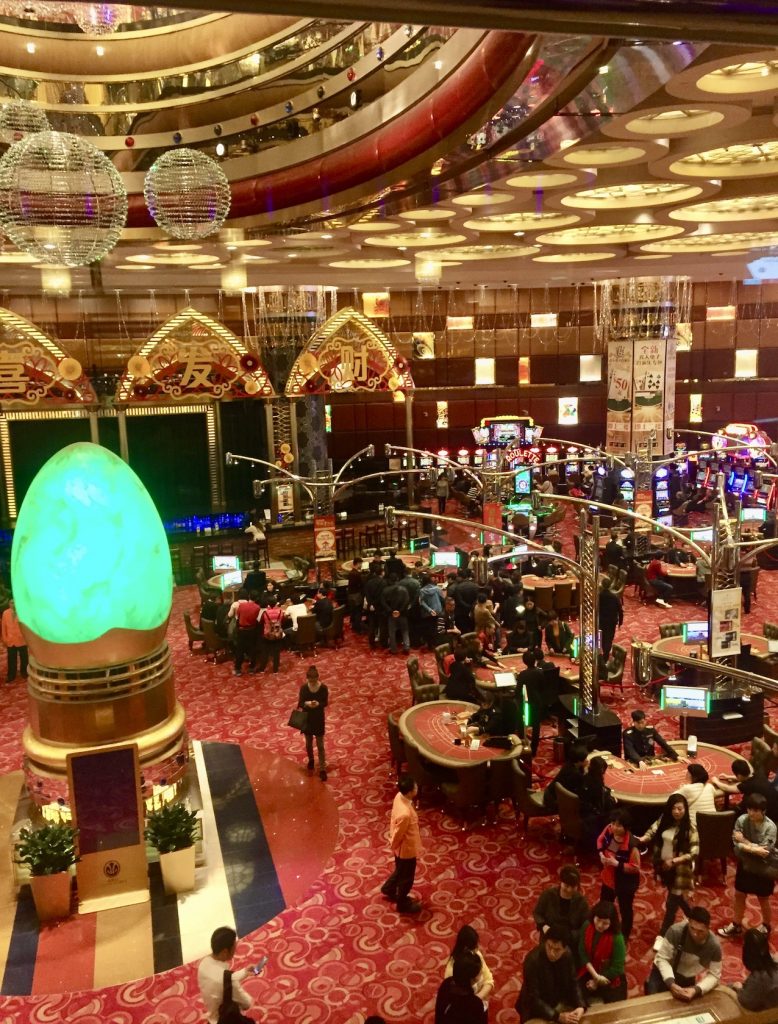 Our one casino night in Macau came at The Grand Lisboa. Gambling really isn’t my scene. But, you know, when in Rome and all that. Sitting at the bar drinking beer and eating sandwiches, we enjoyed a few brilliant hours of people watching before taking the plunge at a blackjack table.

Wonderboy got a sixteen, the dealer had a 5. “Stick!” said Wonderboy, but apparently his hand gesture wasn’t clear enough. As a result, the non-English speaking dealer took this as request to twist. Poor old Wonderboy was then hit with a seven and we were bust. Comical. 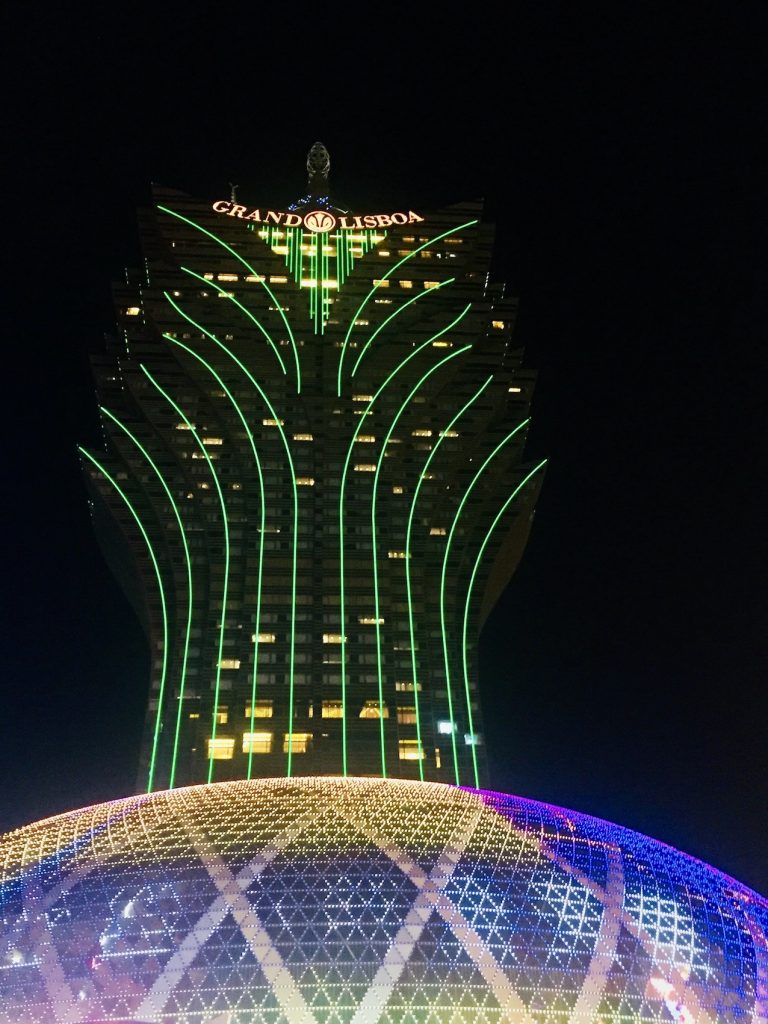 The Lisboa by night.

In addition to the standard range of fancy restaurants, bars and cafes, one unique feature is the hotel’s Crazy Paris Show. Known for its unapologetic sexiness, the cabaret style performance features French Can Can, traditional Indian dance and pole dancing segments. To find out more about The Grand Lisboa, dive into their swanky website. 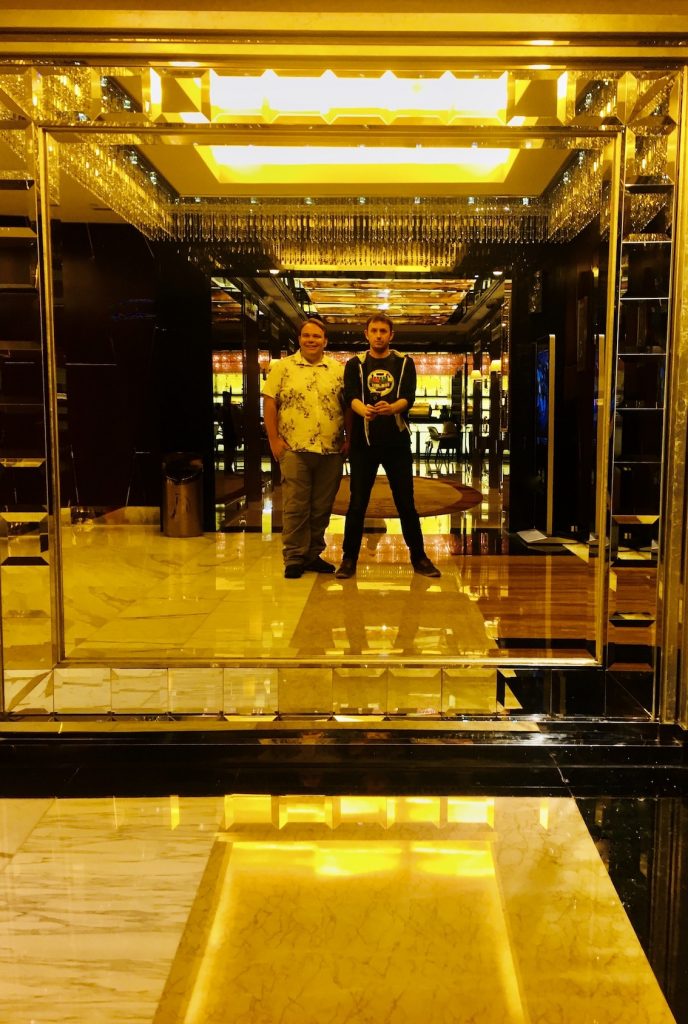