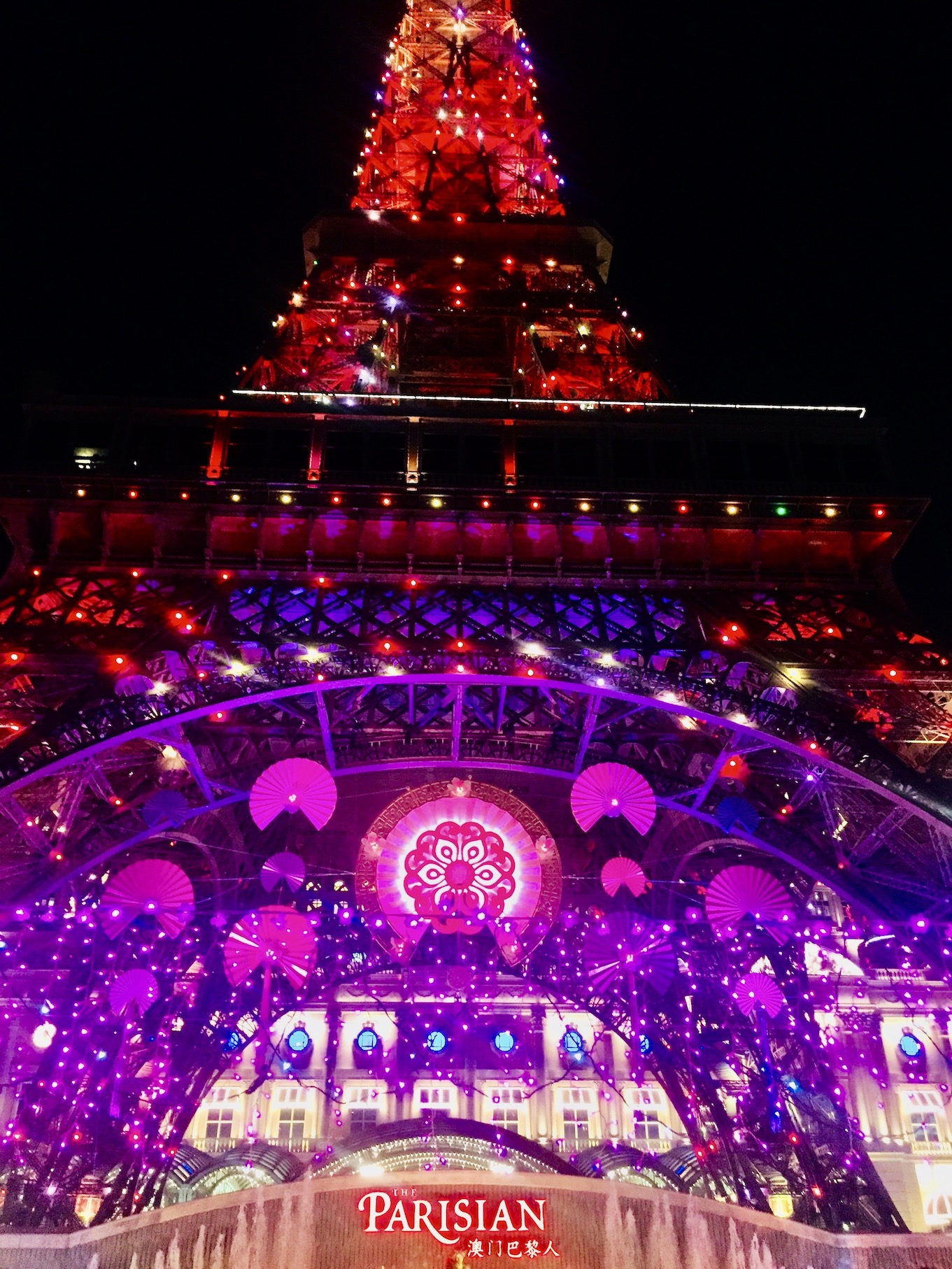 February 2018. Gone shopping in The Venetian? Hung out with Batman at Studio City? Then why not take the short walk over to The Parisian Macau for more unnecessary lavishness. Don’t worry about not being able to find it. Just look out for the 525 foot half scale replica of The Eiffel Tower outside the main lobby. You can actually climb the thing if you wish. In fact, the resulting city views from the 37th floor observation deck are certainly worth the effort. Tickets go for 100MP (£7 €8 $10). 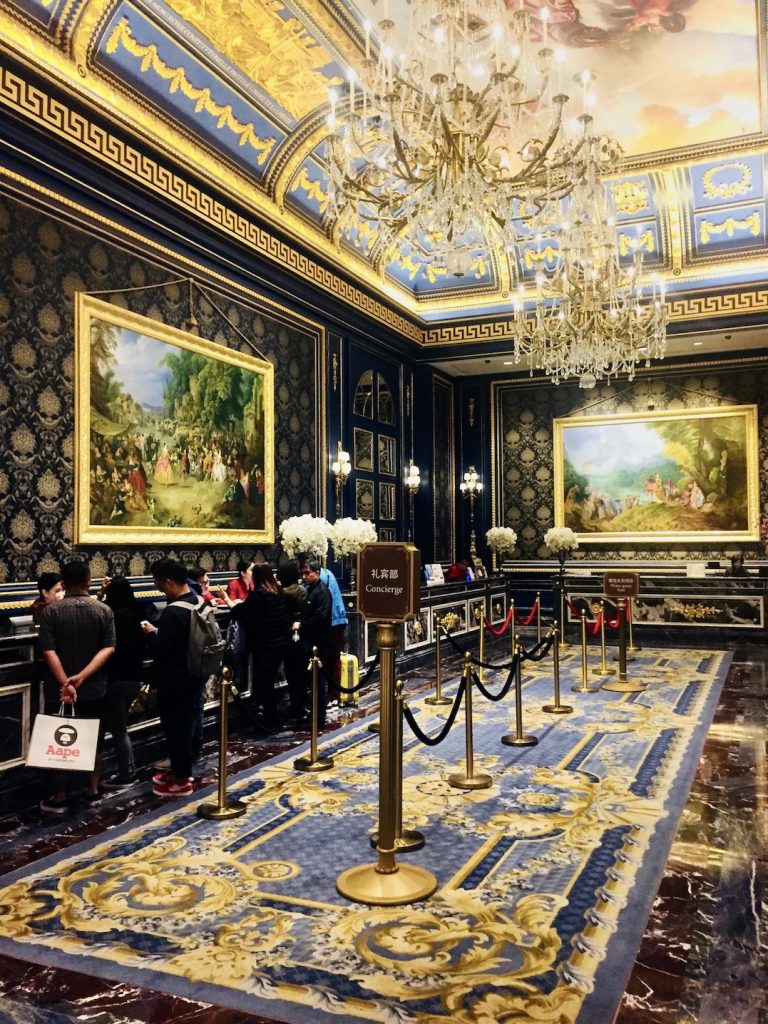 Check in at The Parisian.

The Parisian Macau is brand spanking new, having opened in September 2016. The final construction bill came to around $2.5 billion. It’s absolutely gorgeous inside, the entire joint kitted out with classical sculptures, antique furniture, ridiculous chandeliers, marble balconies and renaissance paintings. This is one of several reception counters running off the main lobby. 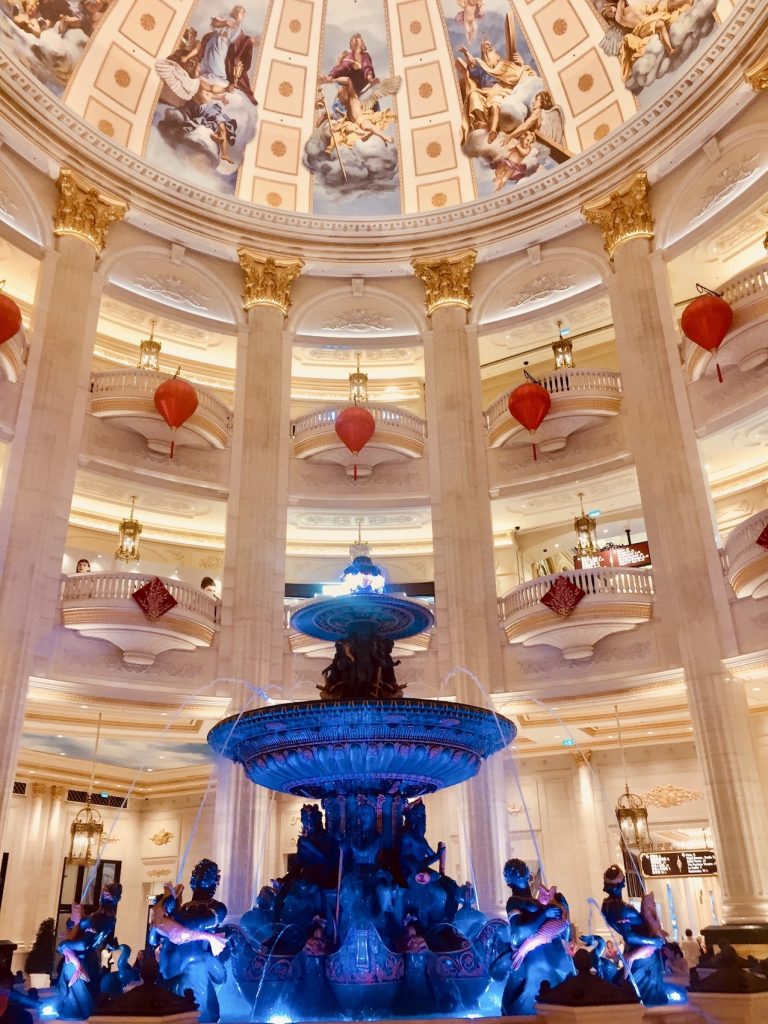 The Parisian’s main draw, particularly with non guests, is its grand fountain in the main lobby.  It was modelled on the gorgeous Fontaine de Mers from Place de la Concorde in Paris. 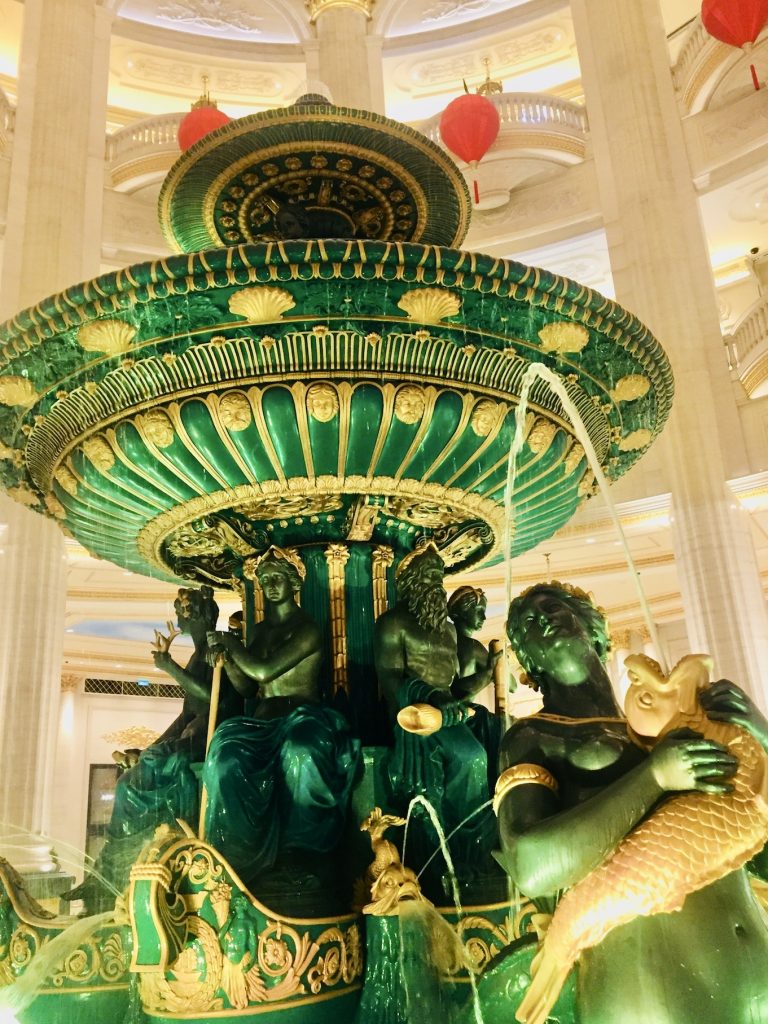 On the hour every hour, the fountain sparkles and shimmers as it changes colour. The show always draws in the crowds, hence it can get hectic during these times. 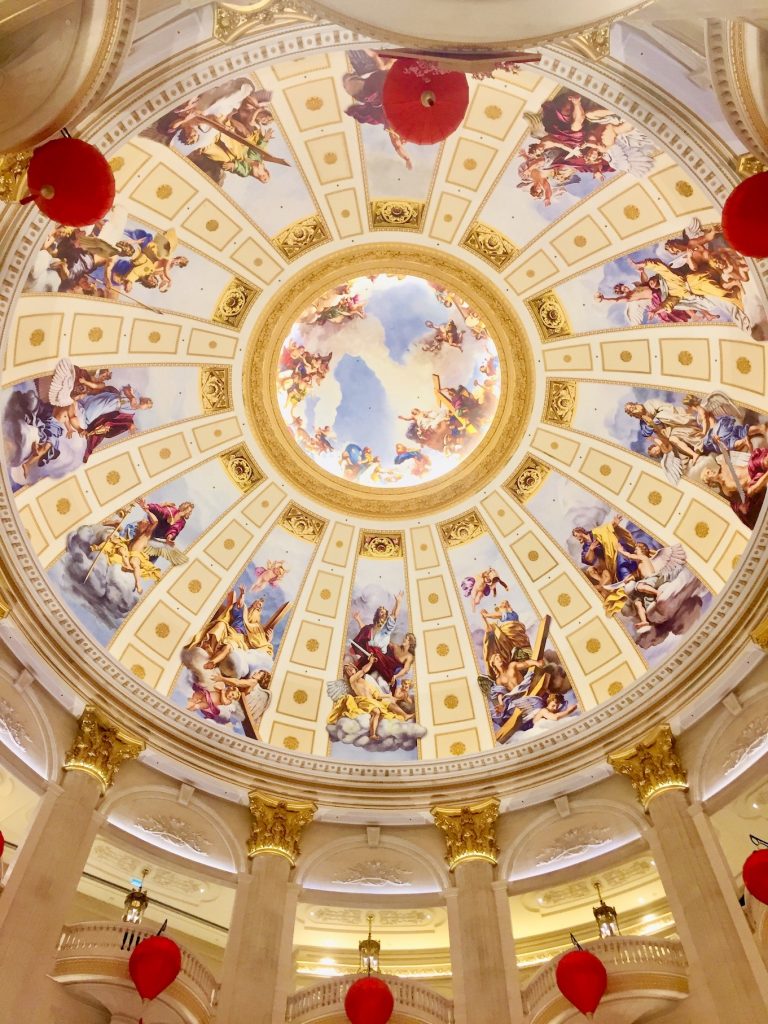 The lobby ceiling at The Parisian.

With all the attention on the fountain, don’t forget to look up at the lobby’s similarly gorgeous renaissance style ceiling. It resembles the ceiling of the King’s bedroom at Versailles. 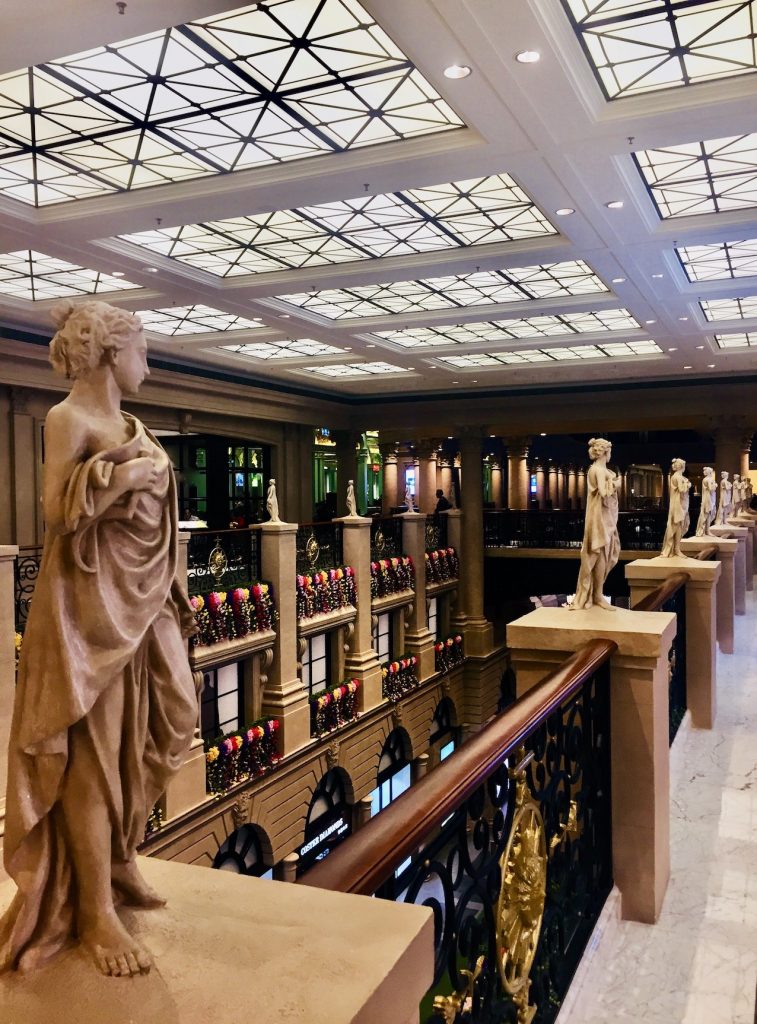 Unless you have a special interest in branded shopping, you might find your explorations of The Parisian’s interior a little tedious. Especially if you’ve already seen a few of Macau’s monster hotels. 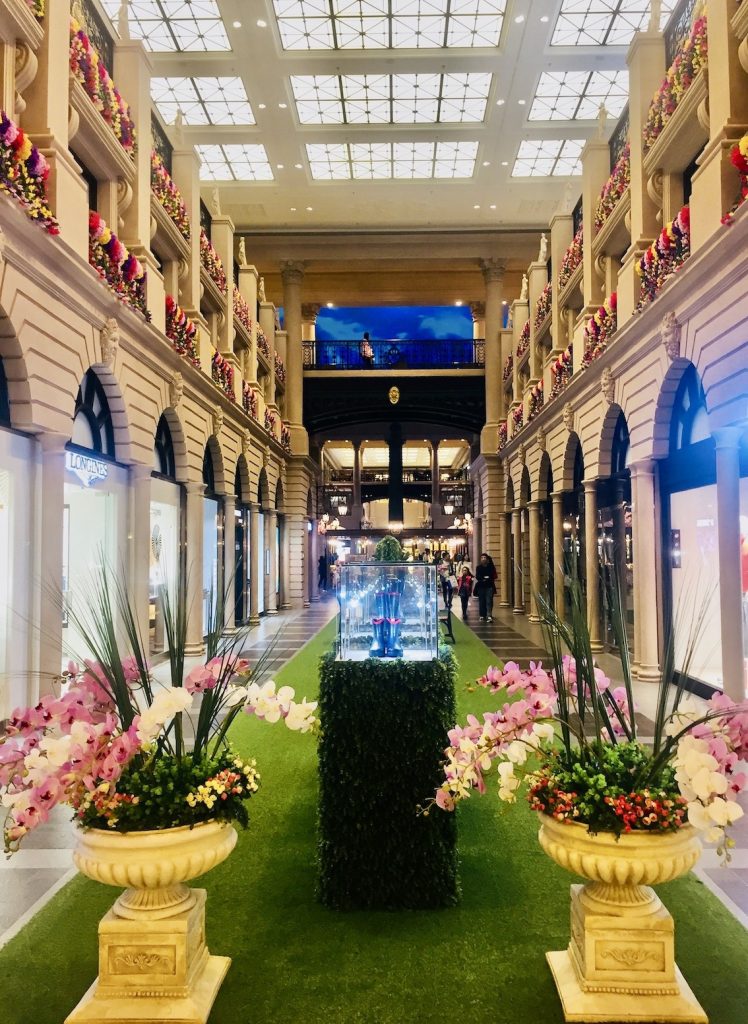 It’s all very pleasing on the eye. However, having wandered a few floors we quickly felt like we’d seen enough. If you’re looking to do stuff there’s a pricy Aqua World Park and a variety of shows to see at the 1,200-seat theatre. Moreover, the hotel’s health club is so damn expensive it’s likely to give you a heart attack. Which would be ironic. 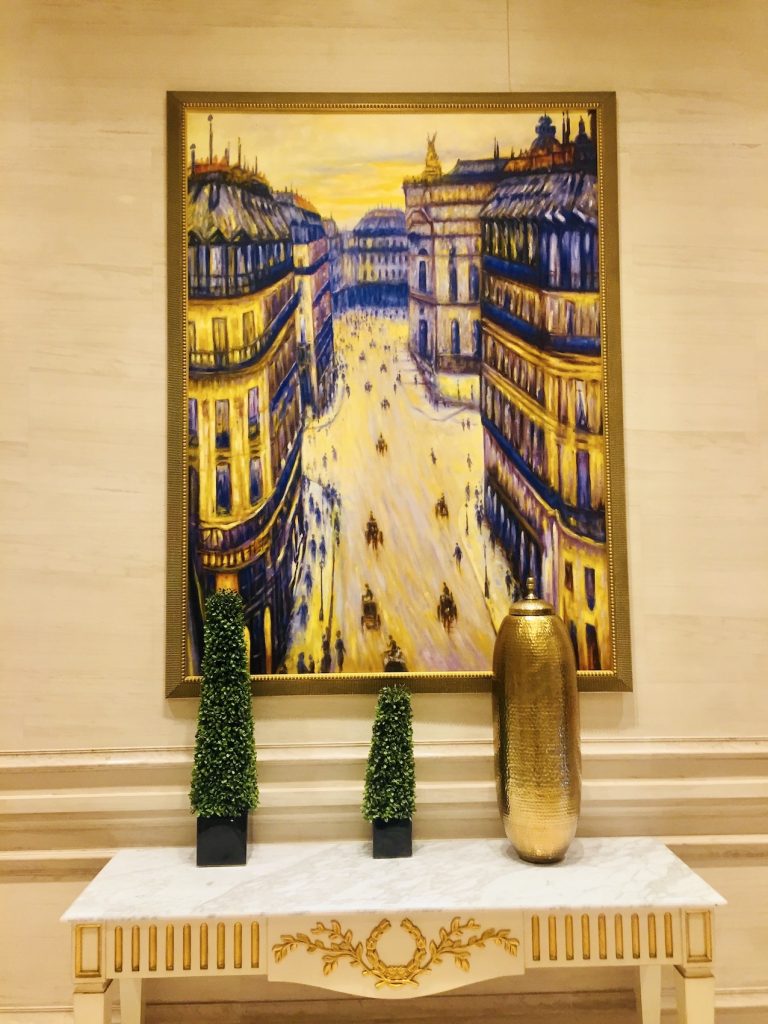 There are a staggering three thousand rooms here. Doubles (with Eiffel Tower views, Paris street map wall paper, marble bathrooms and giant, wall-mounted TVs) go for around £150/€170/ $215. While on the face of it this sounds reasonable, note that breakfast is usually extra. And while the complex has a million and one cafes and restaurants, there’s no hotel bar, which feels like a massive oversight. 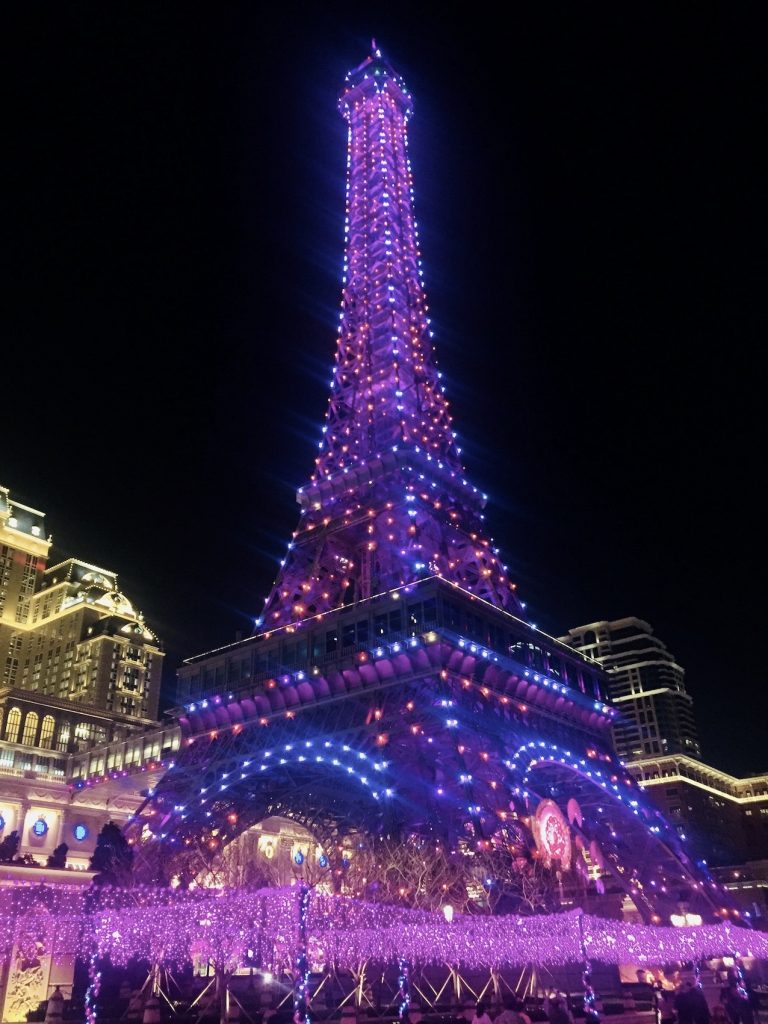 To find out more about The Parisian Macau, check out their shiny website here.