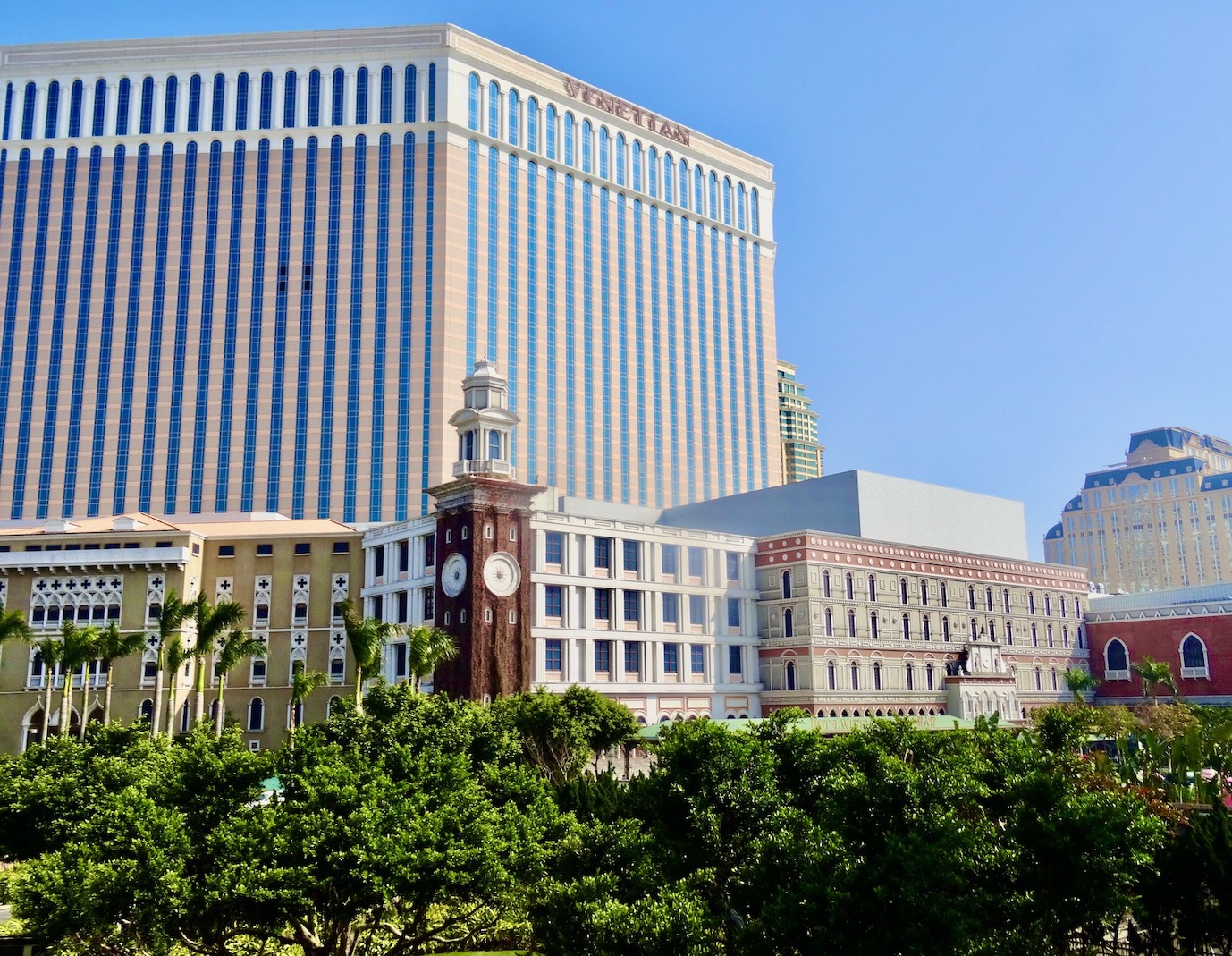 February 2018. If you’ve only got time to see two or three of Macau’s famous hotels, then you’ll almost certainly be saving a spot for The Venetian Macau. It opened in the summer of 2007 as a sister venue to the world famous Las Vegas casino of the same name. But actually it’s China’s version that now scoops bragging rights. After all, this is the largest casino in the world. Moreover, this is the biggest single structure hotel in Asia and the seventh largest building on the planet. Take THAT America. 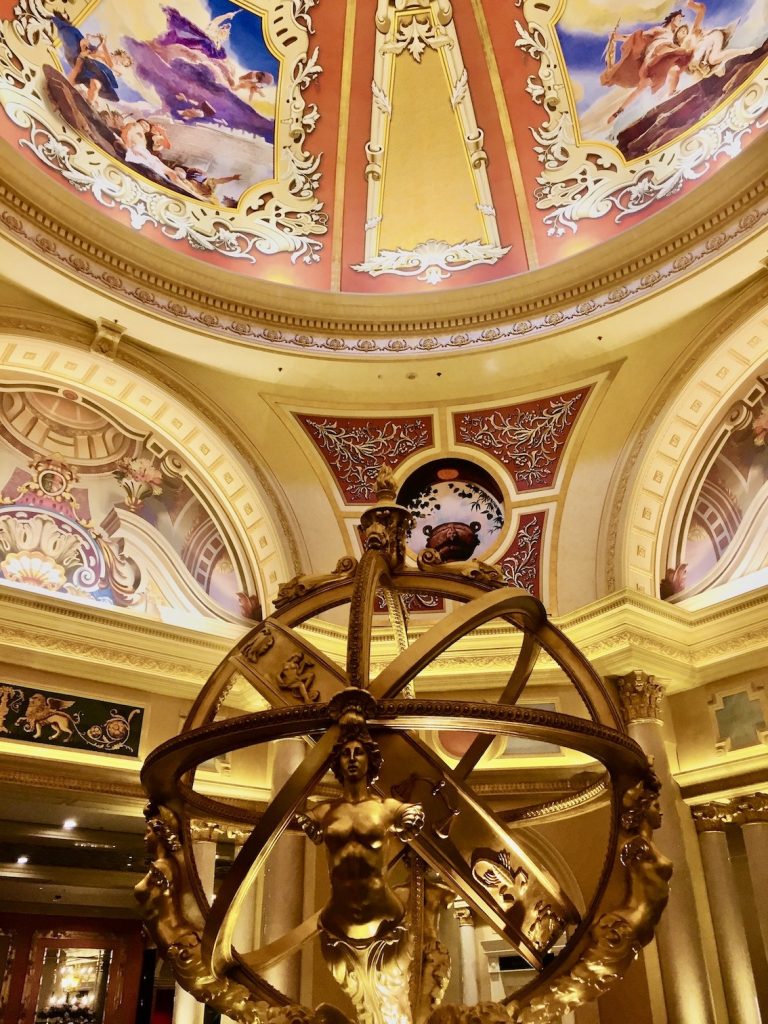 Everything about The Venetian screams of sparkly luxuriousness. This main lobby sums up the vibe perfectly. Where a huge, gold-plated sculpture holds court between the glossy marble floor and Italian style ceiling. 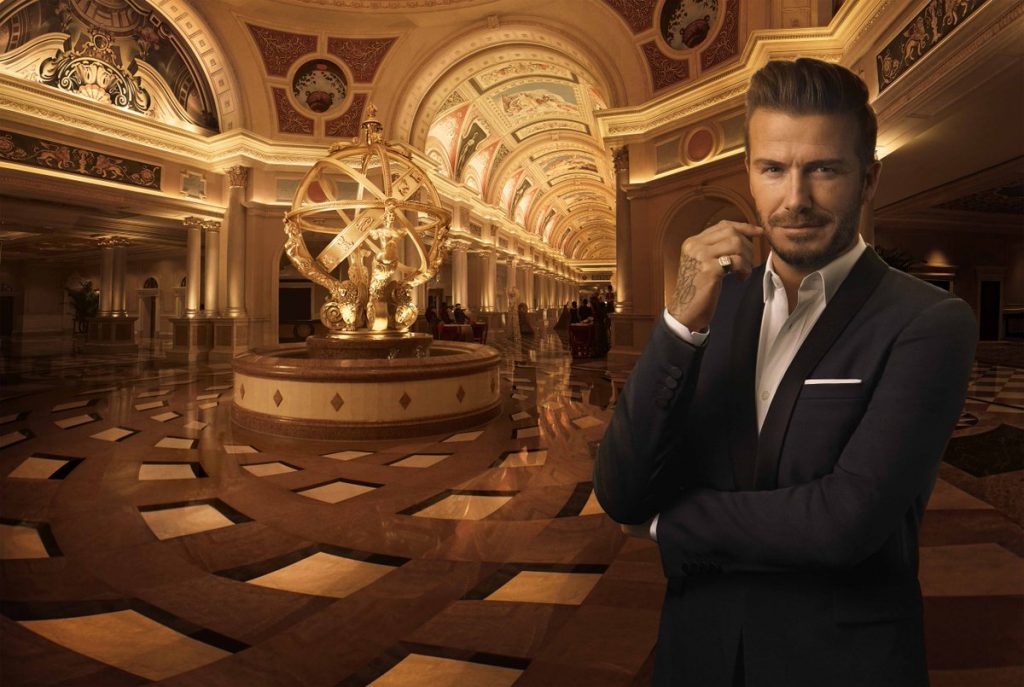 Moreover, look out for the glass panels featuring brand ambassador David Beckham. “The Venetian is fucking great!” says his – I can’t believe how much they’re paying me for this – smile. 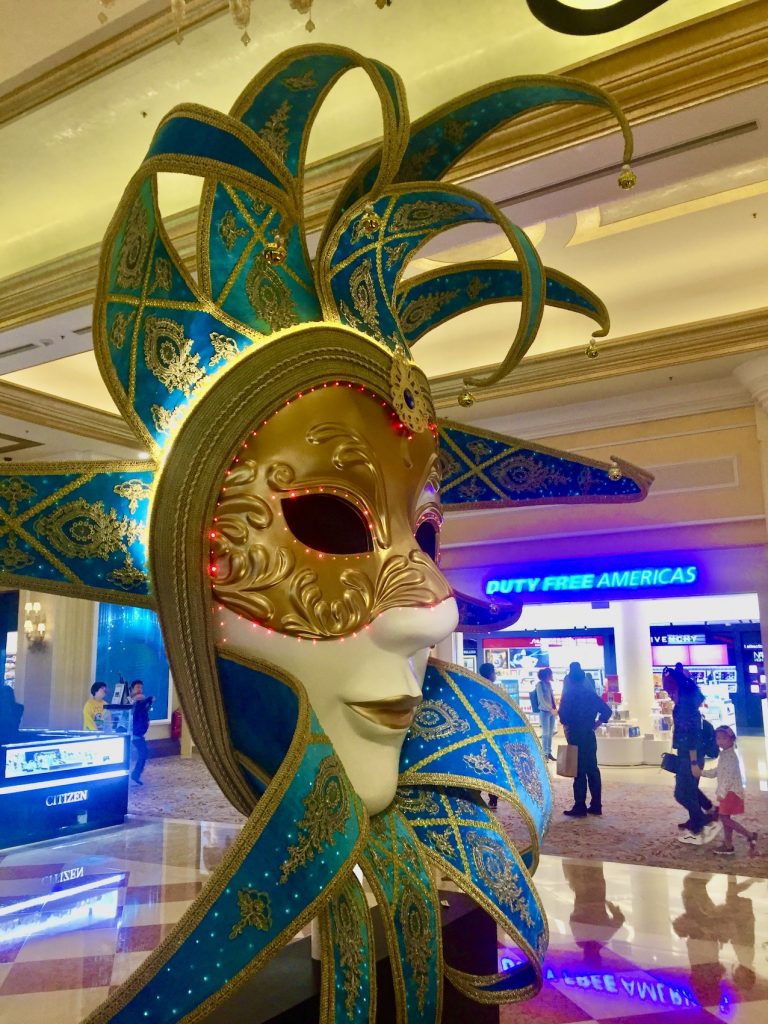 One of Macau’s many giant Venetian masks.

There are giant mask sculptures and statues peppered throughout The Venetian’s 39 floors. Nevertheless, these artistic flourishes play second fiddle to what essentially feels like Planet Earth’s largest shopping mall. 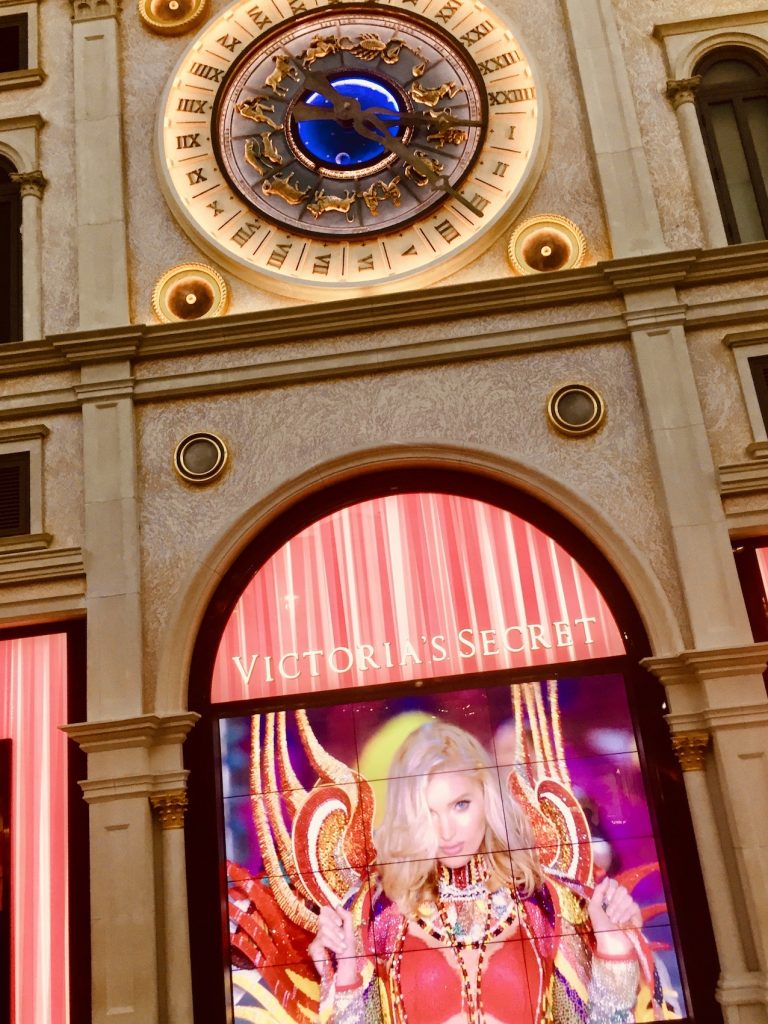 In fact, The Venetian boasts a whopping 3000 stores spread out across 149.000 square meters of retail space. “Soulless isn’t it?” observed Wonderboy and, well, it was hard to disagree. UNTIL that is, we came across a Marks & Spencer’s food shop! OH. MY. GOD. Which frankly felt like an underreaction after a year spent in the culinary wasteland of small town China. 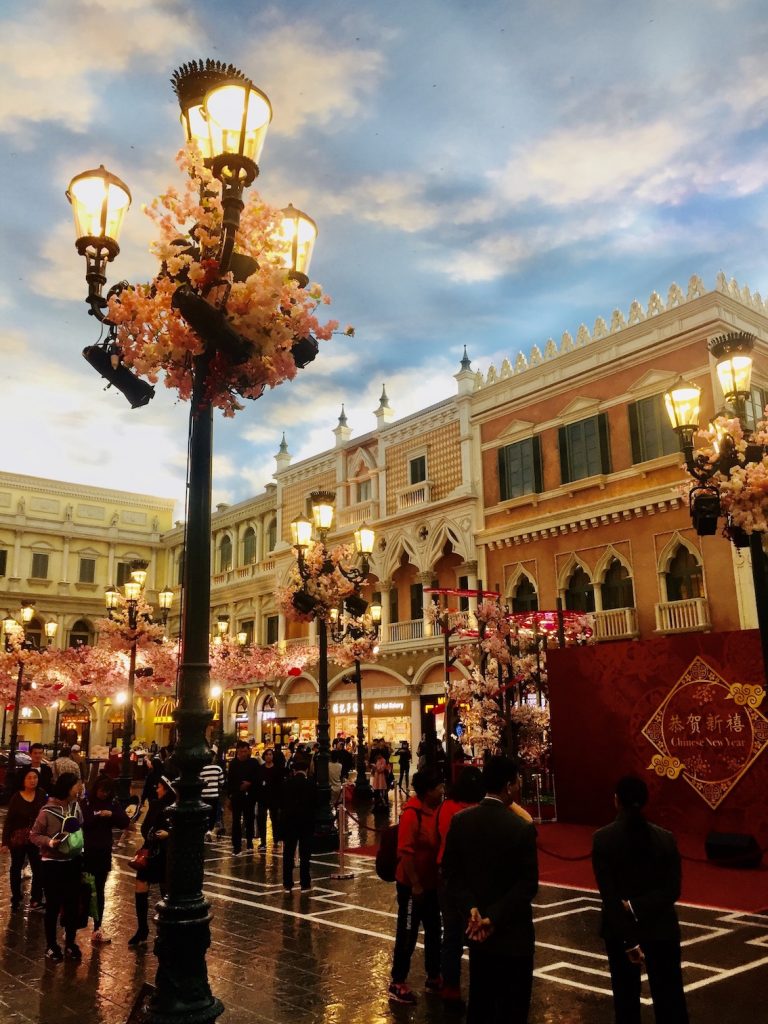 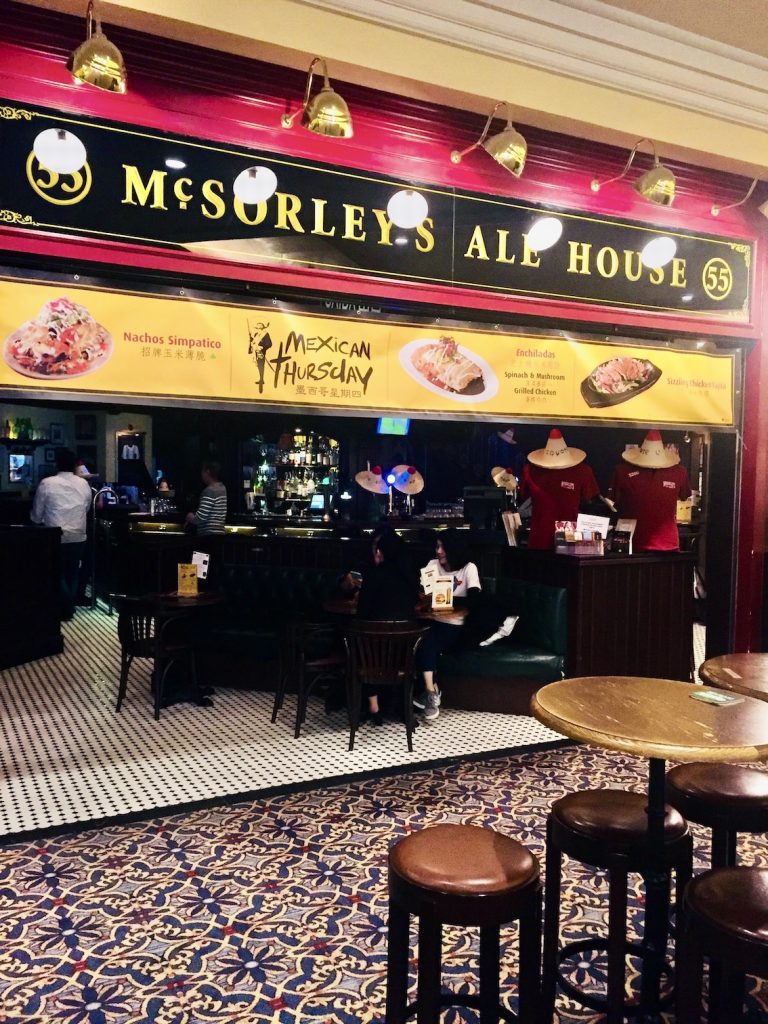 Having weighed up our many options, Wonderboy and I finally ended up eating at McSorley’s Irish Pub on Deck B. Here I had the dubious pleasure of eating one of the world’s most expensive Bangers & Mash. The taste? It was alright. 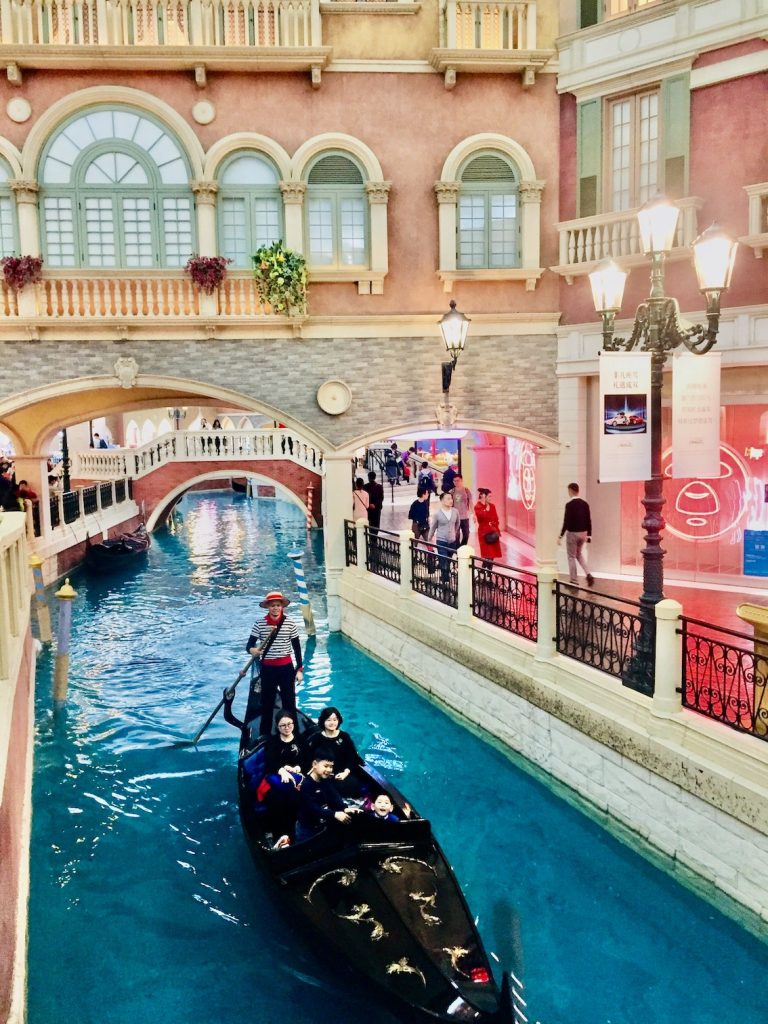 Most people heading to The Venetian Macau are certainly hoping for some gondola action. Even if it’s just watching families bob along from one of the many bridges. The vast majority of the gondoliers here are foreigners (non-Chinese), which I guess is a big selling point for domestic tourists. One of them, a portly Scandinavian girl, was singing opera while she rowed. We could actually hear it from two or three streets away! She was amazing, probably the most impressive thing of the day. A private gondola ride, which seats up to six people, goes for 528MOP (£47 €53 $65). 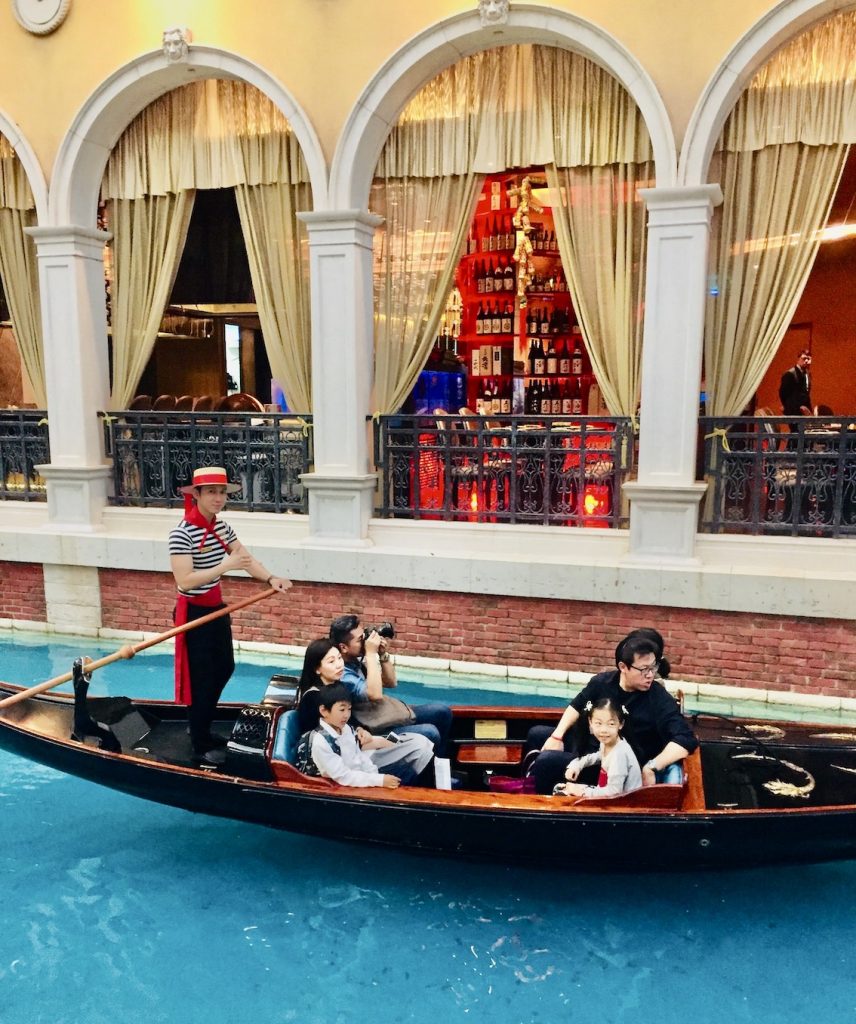 Wanna dive in deeper into The Venetian Macau? Head straight for their website.