August, 2009. I’ll never forget my first beach experience in China way back in the summer of 2009. S and I were in the midst of an extensive tour around Shandong Province. Of all the places we saw, there was something particularly charming about the coastal city of Qingdao. It was perfect beach weather during our stay, with high temperatures and clear blue skies. Hence we made sure to put a day aside for the city’s famous, albeit unimaginatively named Number One Bathing Beach. On arrival it was absolute bedlam, easily the busiest beach I have ever seen.

I took some very cool photos that day. A collection of shots that were ultimately doomed when the hard drive they’d been stored on got accidentally knocked off our living room table. The photos you’re looking at now are thumbnails pulled off Facebook, literally the only copies I have. Oh, the regret. This is Qingdao’s version of Muscle Beach, where the guys take themselves very seriously. I remember saying hi (in Chinese) and getting no reply.

Thankfully there were plenty of friendly people on the beach that day. Moreover, many of them seemed absolutely fascinated by us pasty-skinned foreigners. Finally, we lost count of all the people waving and shouting hello. The beach itself can’t have won many beauty prizes. Furthermore, the sea wasn’t anything to shout about. As you can see from the lacklustre dirt-brown water in the above shot.

The beach is massive! In fact, some Chinese tourism sites claim it to be the largest in Asia! The Germans constructed the beach in 1901 following their invasion of Qingdao. From the many shots I took that day, this one always makes me giggle: “Seriously, I can’t find it!”

I doubt I’ll ever get back to Qingdao. There’s just too much of the world to see. As a result, I’ll always feel a sense of regret that I didn’t give it the photographic justice it deserves. If you’re in the region, don’t hesitate to check out this vibrant city and its curious beach culture. Where people hide under umbrellas and cover themselves in sand because they’re scared of the sun. Where catching jellyfish is a bit of a sport and barely anyone can swim. You really do have to see it to believe it. 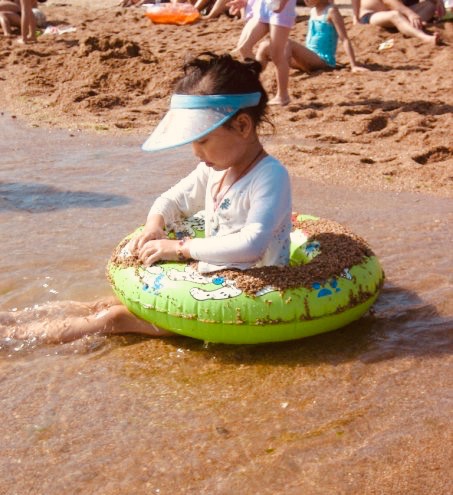 You can reach Number One Bathing Beach via the metro from the city centre. Jump off at Huiquan Guangchang (Line 3) at Exit C. It’s just a three-minute walk from there. The beach is free to enter and all the staring you’ll get is similarly complimentary!

For a more personalised account of my time in this amazing Chinese city check out my short story Don’t Let Me Down, taken from my series Challenged In China.

I’ve travelled all over the country and written up an extensive army of travel report. Dig into my travel guides from around China here.