August 2009. Qingdao is a beautiful place that consistently pops up in online articles ranking China’s Most Liveable Cities. Seductively perched on the east coast, Qingdao offers decent beaches and is the gateway to several handsome mountains. Moreover, Signal Hill Park (Xinhao Shan) is one of ten major hill parks in and around Qingdao. The park houses an old German signalling station dating back to 1897. You can even enter the old observation tower, a rotating hexagon pavilion. Entry to the park is just 3RMB, with an additional 10RMB to go up the tower. 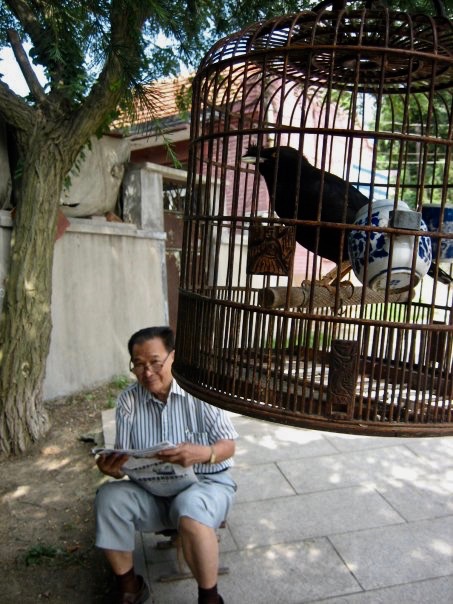 Looking for a cheap place to stay in Qingdao? There are a couple of fantastic hostels here that hold their own among the best I’ve stayed in across China. The Old Observatory Hostel sits atop Guangxianshan Park in the heart of the old German district.

The hostel was renovated from an old German observatory, built in 1904. Expect decent food, more great Qingdao views and a pretty courtyard outside reception. In fact, this is where old local men gather in the morning to chat, play cards and read newspapers with their pet birds.

There are also some beautiful European style churches in Qingdao. The cute little Christian (Protestant) Church is well worth a look. Built by German missionaries, this castle-like structure doesn’t get much tourist action. Hence we got the bell tower all to ourselves as we wandered the interior in peace. The church opens daily from 08:30-16:30 and entry is free. Services still take place on Sundays. 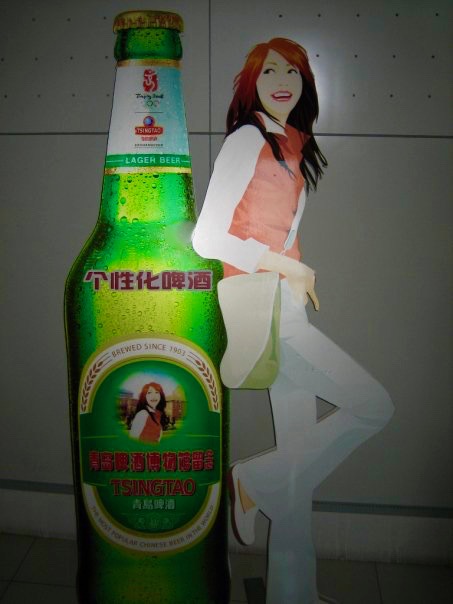 Qingdao is also famous as the home of China’s most popular beer, Tsingtao. As such, a visit to Qingdao Beer Museum (Tsingtao Brewery) is essential! Don’t expect too much and just have fun with it. Check out the cool, bottle-top artwork and enter one of their quality control laboratories. Inside you’ll meet white-coated, beer-swilling workers. Furthermore, there’s an amusing drunken house where mysterious, magnetic forces pull visitors from wall to wall. Entry is 60RMB (July to September), 50RMB (October to June). 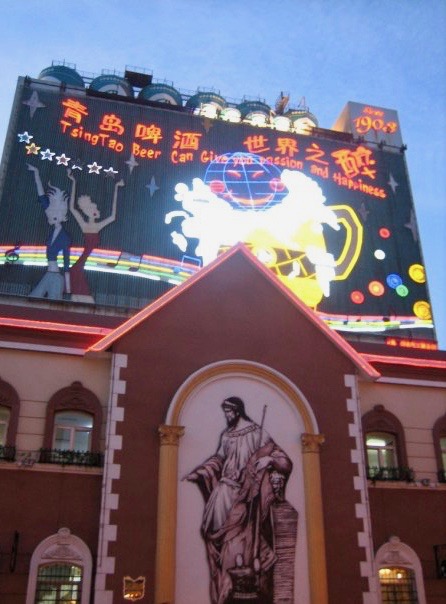 “The birth place of beer culture!”

“Tsingtao beer can give you passion and happiness!”

states another, above a painting of Jesus Christ.

European architecture prevails on Beer Street’s cobbled road, where the garbage cans are cutesy beer barrels and neon signs light up the night sky. Things here can get pricy, so take the time to seek out a joint offering pitchers of icy-cold Tsingtao for a wallet-friendly 10RMB.

Like this? Take a peek at more travel reports from Qingdao.

For a deeper account of my time in this amazing Chinese city, check out my short stories Don’t Let Me Down and The Jellyfish Factor. Taken from my series Challenged In China.

To delve further afield, why not dig into my travel guides from around China.