July 2009. Should one of the world’s most sacred Buddhist mountains ever find itself onto your bucket list, then look no further than the Tai’an in China. It’s an intriguing little place of traditional markets, towering shopping malls and the unmissable Dai Temple Complex.

Above all though, a visit to Tai’an is all about hiking up Mount Tai (Tai Shan), a fascinating open air museum of temples, gardens, statues, shrines, streams, cliffs and cypress trees. And let’s not forget the unforgiving stone slabs you’ll have to conquer to reach the top, all 6,293 of them! Like me, you’ll undoubtedly need a breather or two along the way.

Tai Shan is full of kooky surprises as you make your ascent. I encountered this entrepreneurial teenager and his pet monkey about three quarters of the way up. Dishearteningly, his furry friend was chained to a nearby post. Basically he was charging tourists for a stroke and a photo. And just a glance down at the baseball cap placed at his feet showed that Monkey Man was doing pretty well for himself! Rest assured he didn’t get any money from me!

These guys blew my mind! I’d just reached the point where I was beginning to think I should have taken the cable car back at Midway Point To Heaven. Hot, tired and discouraged, these two troopers made me feel so embarrassed I almost gave myself a slap. With a completely new perspective on the challenge ahead, I was subsequently able to push myself through the final leg of the climb.

While most people come to Tai’an purely for the mountain, the town itself is well worth a few days of your time. It would be a crime to leave without seeing Dai Temple, a large Taoist garden complex with an amazing collection of Bonsai trees and plant-filled courtyards. Perfectly peaceful, it’s the ideal place for an afternoon of reading, writing or photography. Furthermore, there are over 150 buildings to explore. 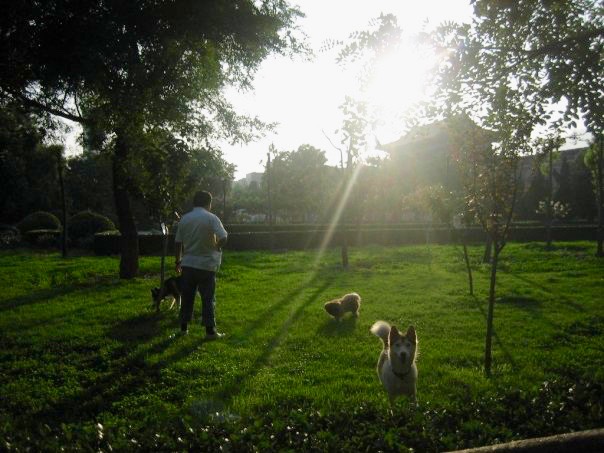 I stumbled across this small city park one evening during sunset. It was virtually deserted, except for this one man and his dogs. One of them came trotting my way as soon as he’d spotted me lining up my shot.

For a deeper insight into my Tai’an adventures, check out my short story Two Men and a Refrigerator.

Two Men and a Refrigerator, a short story from China.