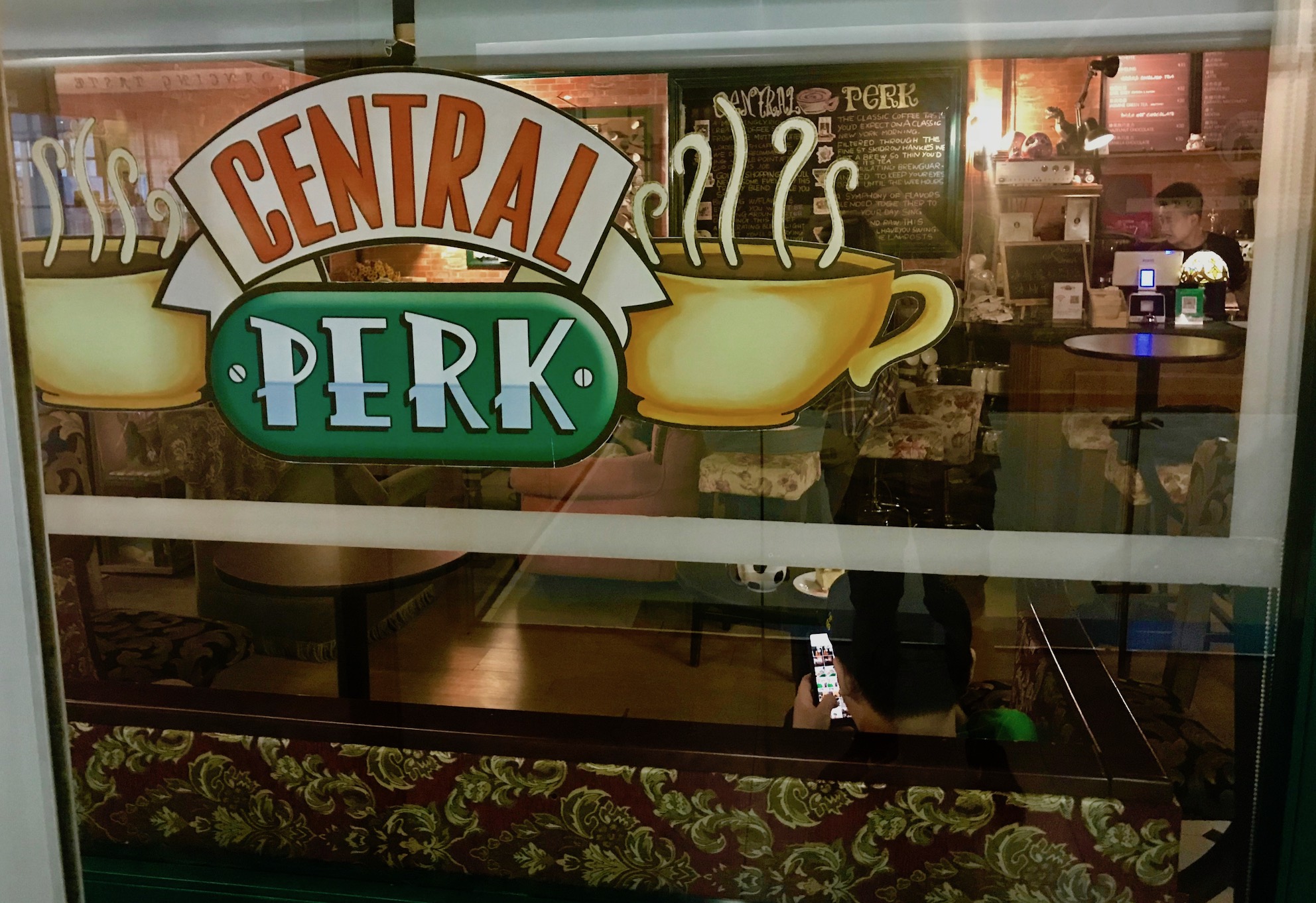 September 2018. I couldn’t believe my ears when I heard about Friends Cafe in Beijing. Yes sir, an actual replica of Central Perk from the TV Show Friends. It sounded so… un-Beijing-like. Firstly, I should admit that I’m hardly the world’s biggest Friends fan. I like the show, but I’m not one of those starry eyed, episode quoting fanatics. Nevertheless, I was still keen on going, not least because I heard it’s difficult to find. Music to the ears of a committed travel blogger don’t you know.

Boy they weren’t kidding about the location! I came on foot from Tiananmen Square, thus it took me well over an hour to reach Chaowai Soho Shopping Mall. First I’d taken a bus, but the traffic that afternoon was appalling. Consequently, I jumped off halfway down the route and ended up walking the rest of the way. 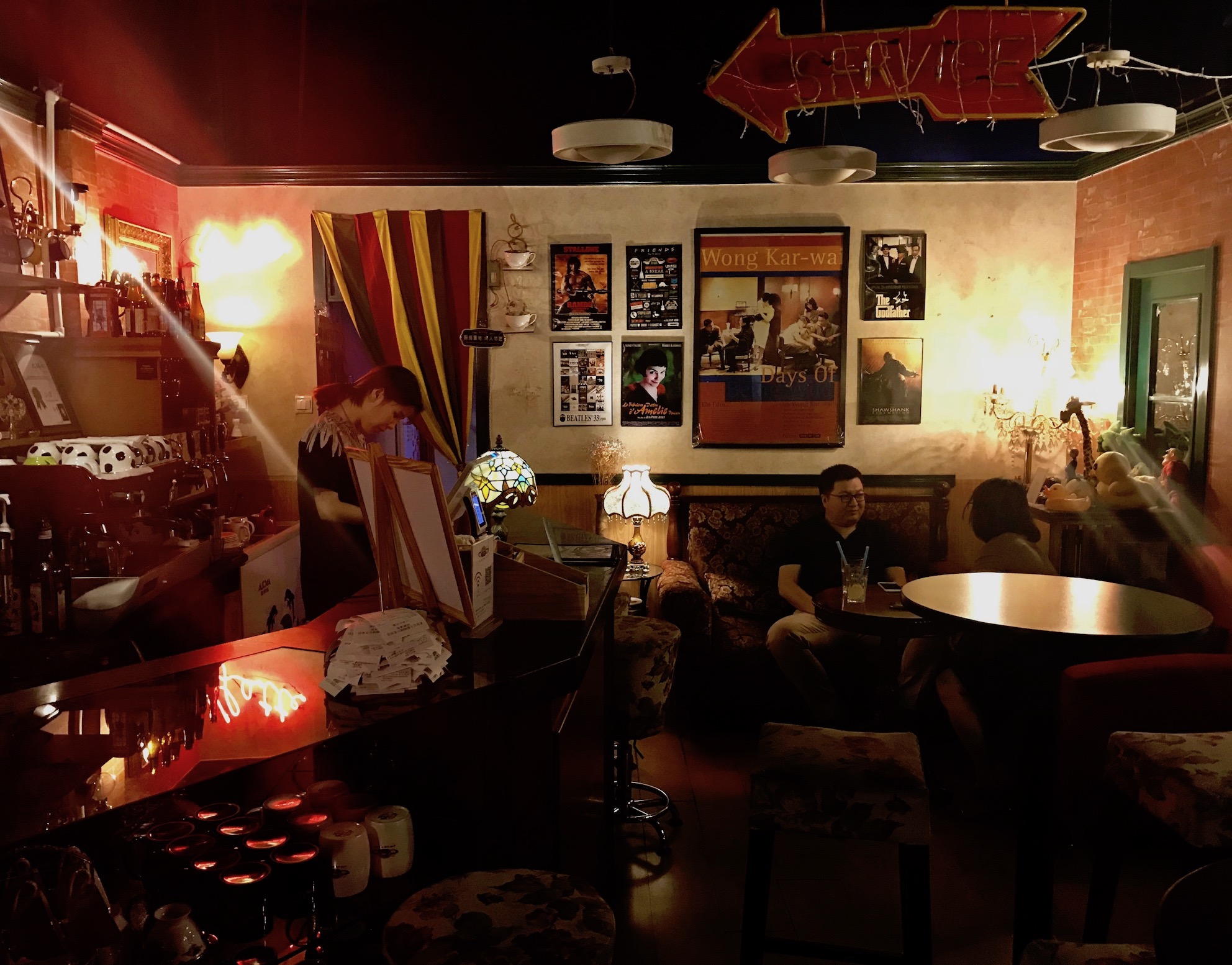 Getting to the mall turned out to be the easy part! From there you’ve got to track down the poorly signposted Building A, then work your way up to the sixth floor of a deserted office block. This can’t be it I kept telling myself, as I went down corridor after empty corridor. And then suddenly there it was! Number 6, huddled in the corner like some kind of cruel mirage. “Hello!” smiled the girl behind the bar as I walked in. “Welcome to Friends Café!” 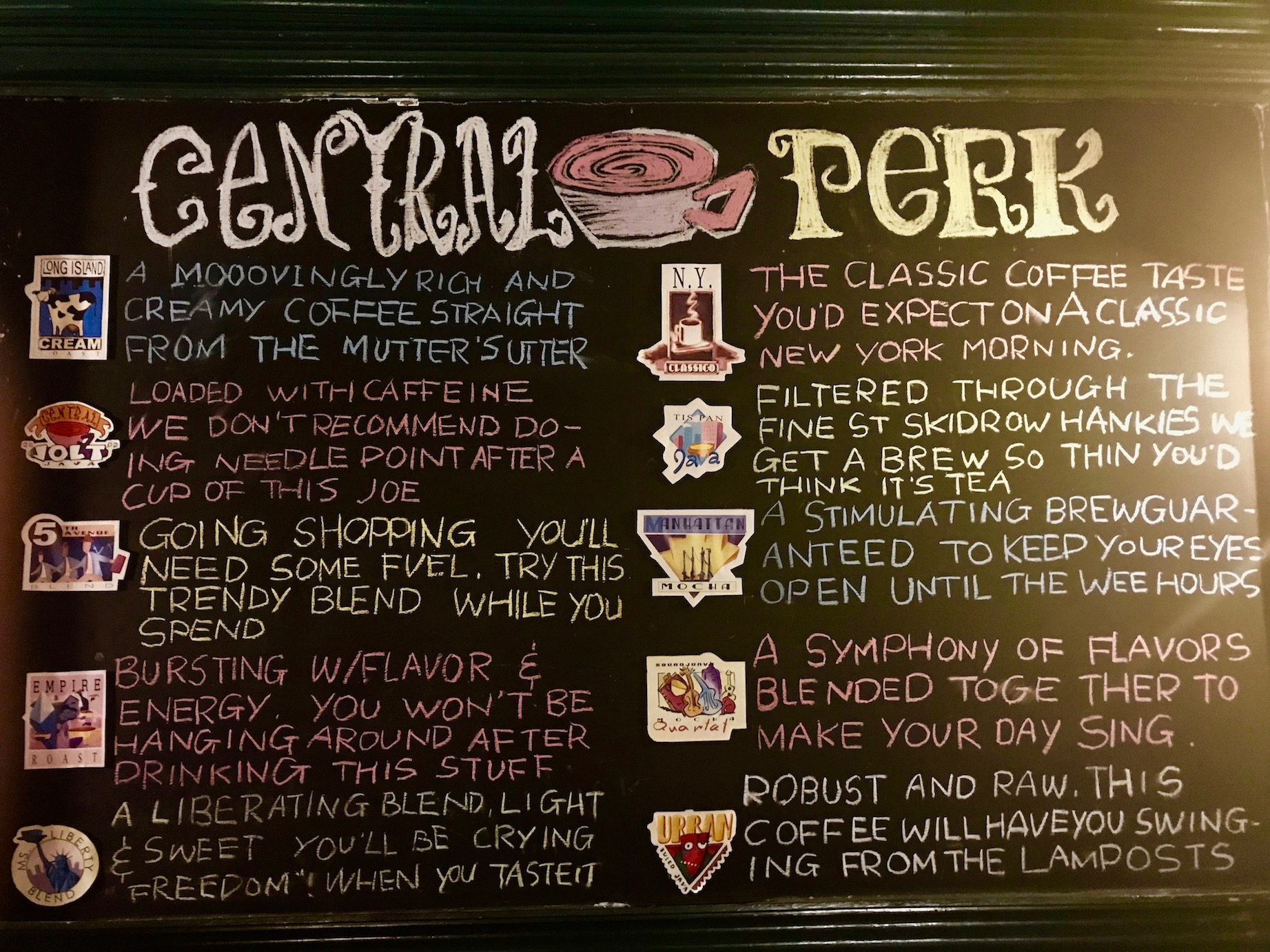 Friends Café opened its doors in 2009, the brainchild of a local Beijing man who loved the show so much he decided to create a coffee shop in its name. Glancing through their menu, I was tickled to see all the drinks and dishes had been lovingly named after the show’s characters. So I went for a Rachel Red Velvet Latte and looked for a place to settle down. 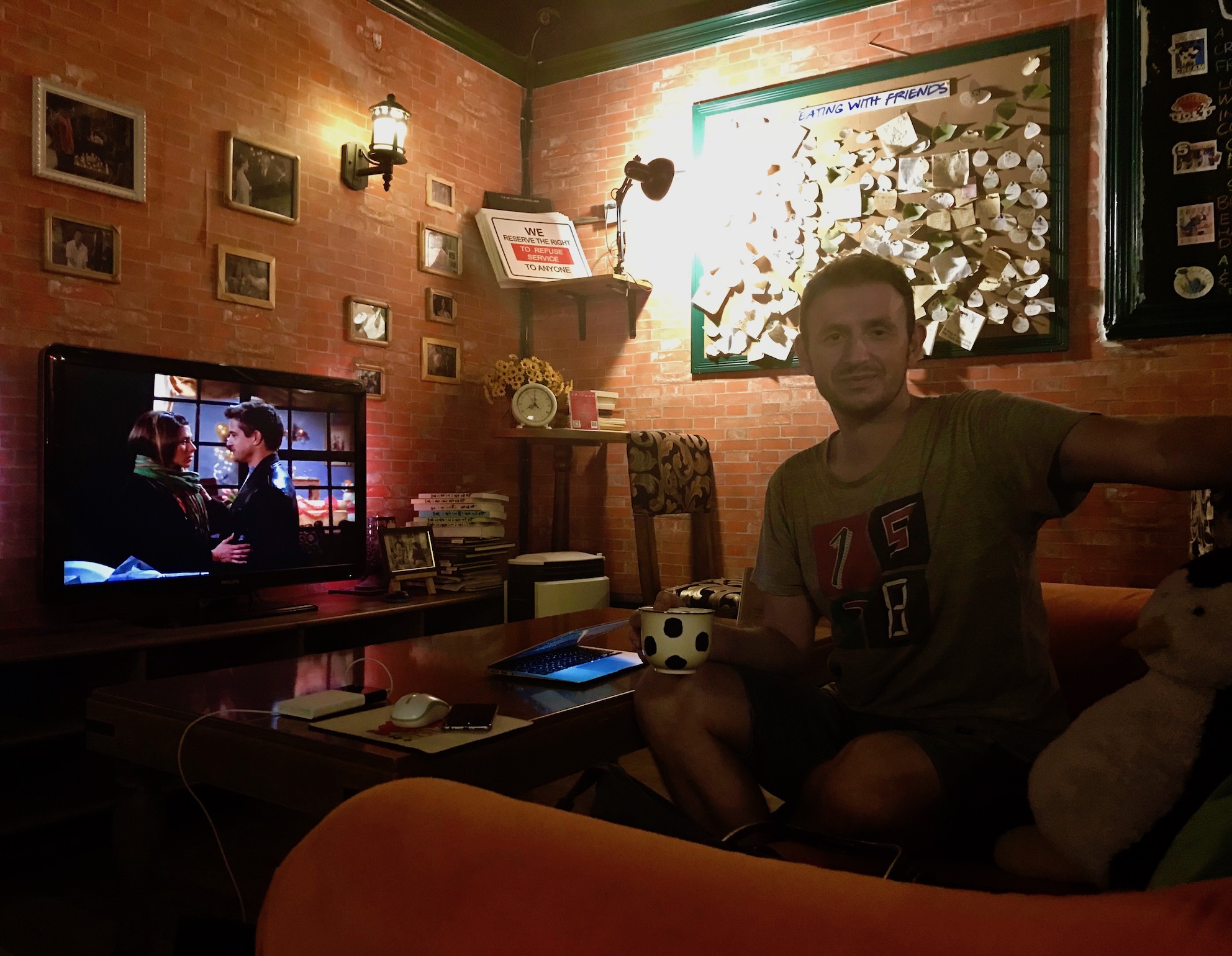 Be warned that it’s quite a small café, with a limited amount of seats. Hence it often gets overcrowded. Luckily for me I had arrived at a lull, which meant I got the replica orange sofa all to myself! Even better, a Friends episode was playing on the TV.

Apparently the show is continuously on during opening hours and the joint’s cosy, living room vibe makes it a wonderful spot to binge-watch whatever season is on. It’s also a peaceful enough place to come and do some work, or even just crash out for a nap. 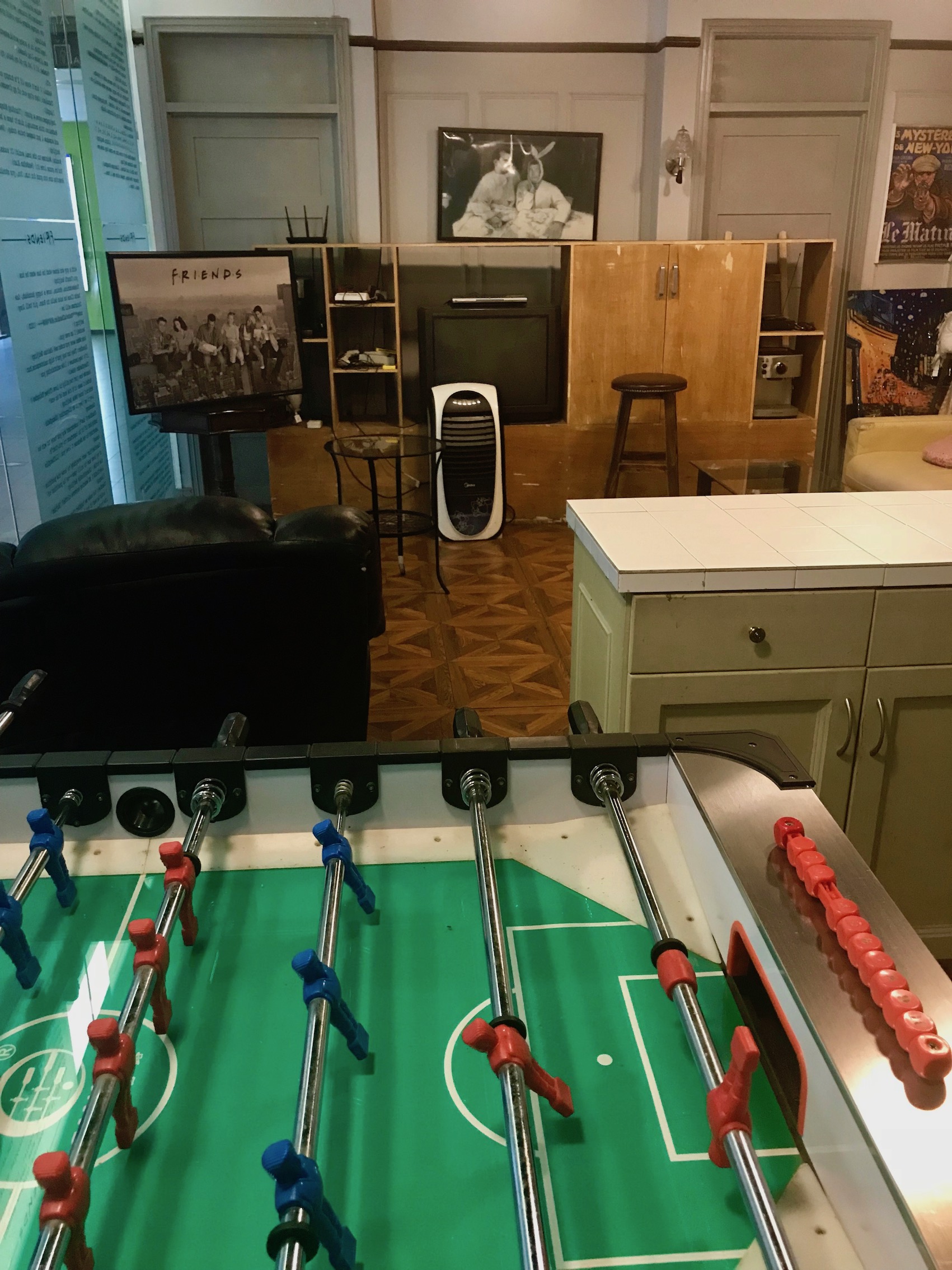 At the back of the café there’s a cool replica of Joey and Chandler’s apartment, which is well worth a poke around for all those little details from the show. A big shout out to the good folk of Atlas Obscura for bringing Friends Café to my attention! Opening times are from 11:00-21:30 daily and for the sake of clarity let me run you through those logistics one more time:

3: Head up the escalators to the 6th floor. Ignore the increasing sense of apocalyptic dread and follow the low-key unit number system towards 6.

Like this? Take a look at more travel reports from around Beijing.

Want to delve further afield? I’ve written stacks of articles from across China.