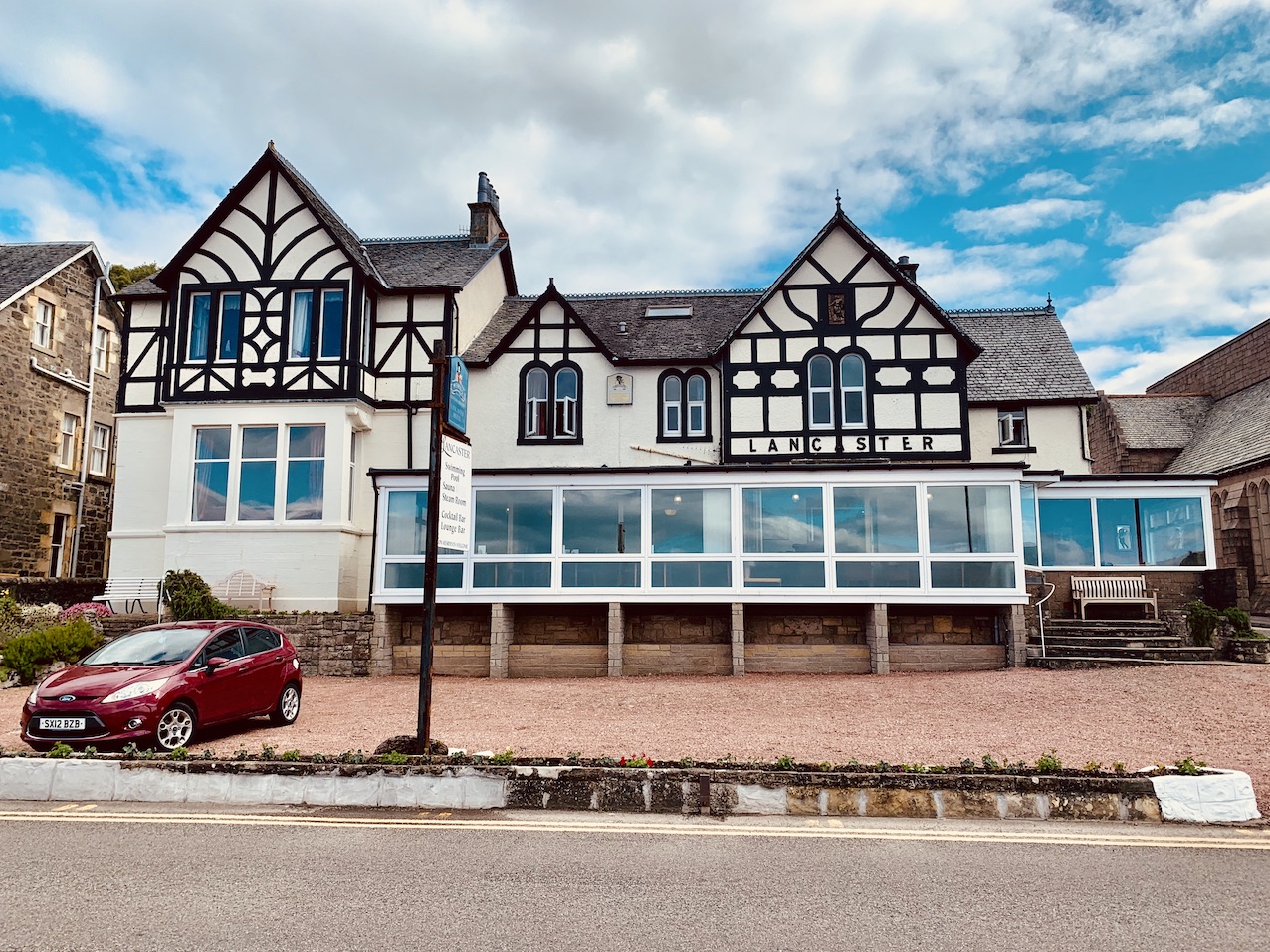 July 2019. Hotels certainly don’t come cheap in Oban. In fact, my sister and I spent a fair chunk of time trying to track down a reasonably priced joint to lay our heads. In the end, after much research, we reluctantly settled on The Lancaster Hotel Oban.

I say reluctantly because of the consistently crappy albeit highly amusing online reviews. Scan your eyes over their TripAdvisor page and you’ll see a colourful festival of 1 & 2-star ratings accompanied by some brilliant quotes.

“Fawlty Towers, except seriously not funny!” 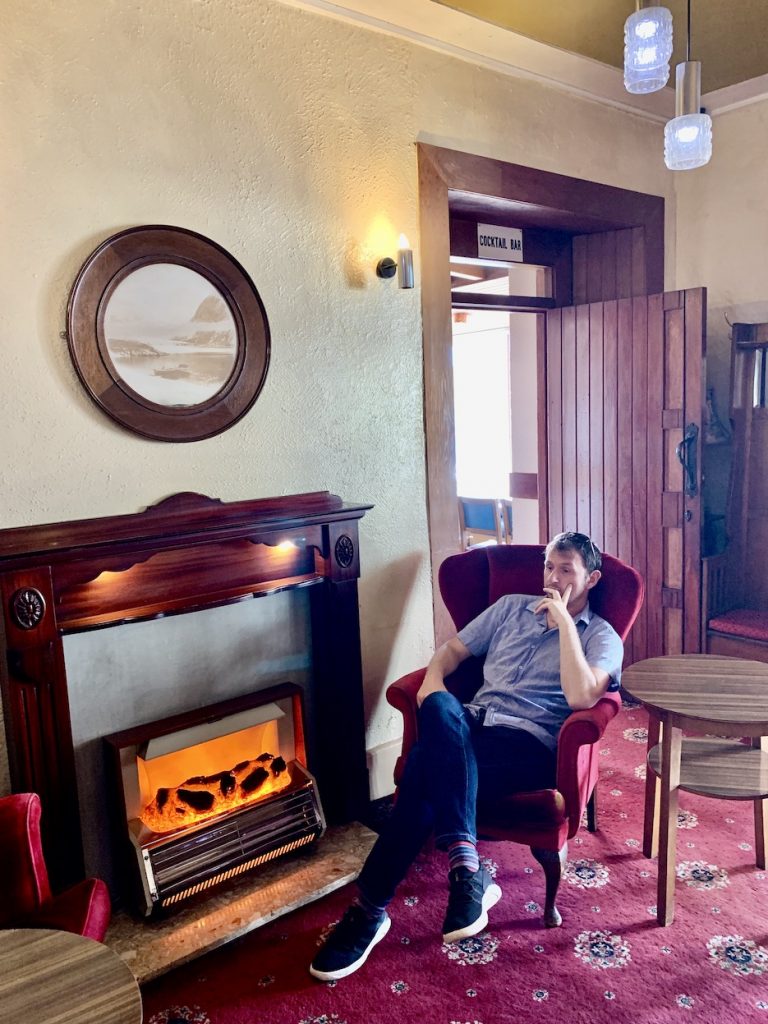 The thing is, the hotel is perfectly situated on Oban’s beautiful seafront right in the heart of town and their nightly rate of £50 really couldn’t be matched. Moreover, the rate included breakfast and they even had a pool! I mean, how bad could it be? Natalie and I have always been game for a laugh, hence we made the booking and eagerly anticipated whatever shenanigans lay in wait.

On arrival, I found myself surprisingly charmed by the black and white wood-and-slate exterior. And there was a similarly nostalgic feel to the tiny, 2-seater lounge by reception. No kidding, my grandmother had the same kind of fire in her living room back in the 1980s! 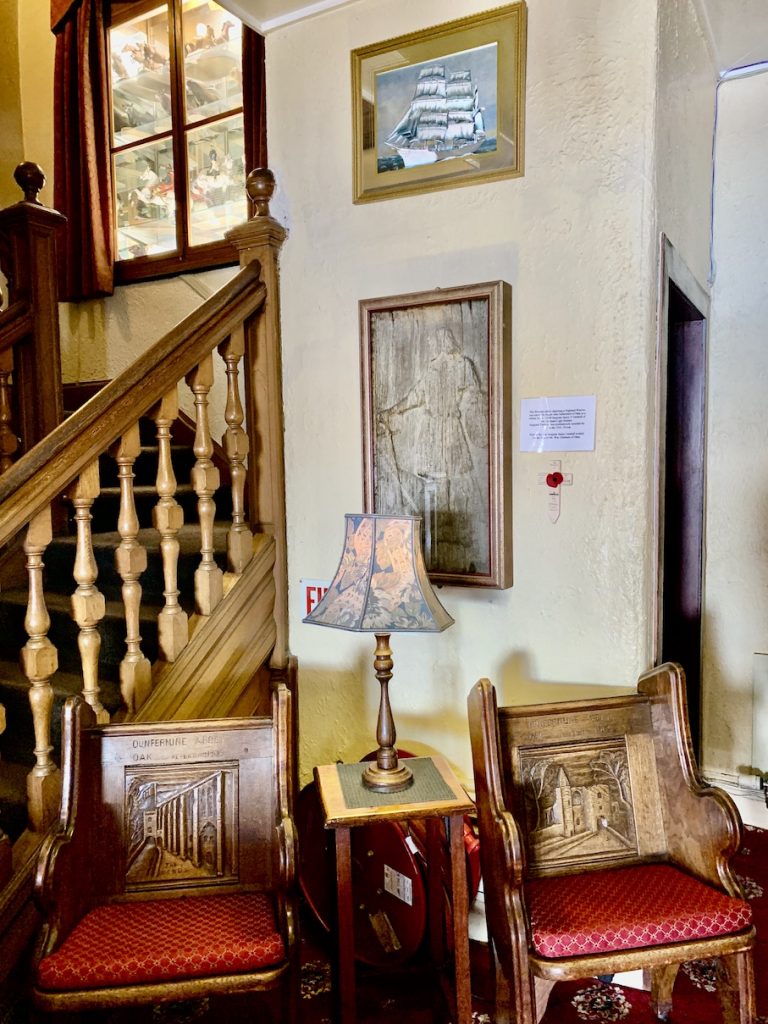 There are more antique touches throughout the ground floor, many of which channel a nautical theme. Apparently The Lancaster has been owned and operated by the Ramage family since 1963. And judging by the wallpaper and carpet, the decor hasn’t had an update since those swingin’ days.

I don’t know who checked us in at reception, but he was an older gentlemen with a stinking attitude. Impatient and condescending, quite suddenly my good first impressions evaporated as Natalie and I made our way up to our twin room on the top floor.

Our twin room at The Lancaster.

I remember both of us holding our breath as we turned the key to the door of our twin room. And then…. well, it wasn’t too bad. I mean the blankets and the carpet were hideous, but otherwise it looked cosy enough.

Even more of a relief was that the ensuite toilet, shower and bath seemed perfectly serviceable. Overall it was totally doable for a night or two, perhaps a bit depressing over the course of a week. 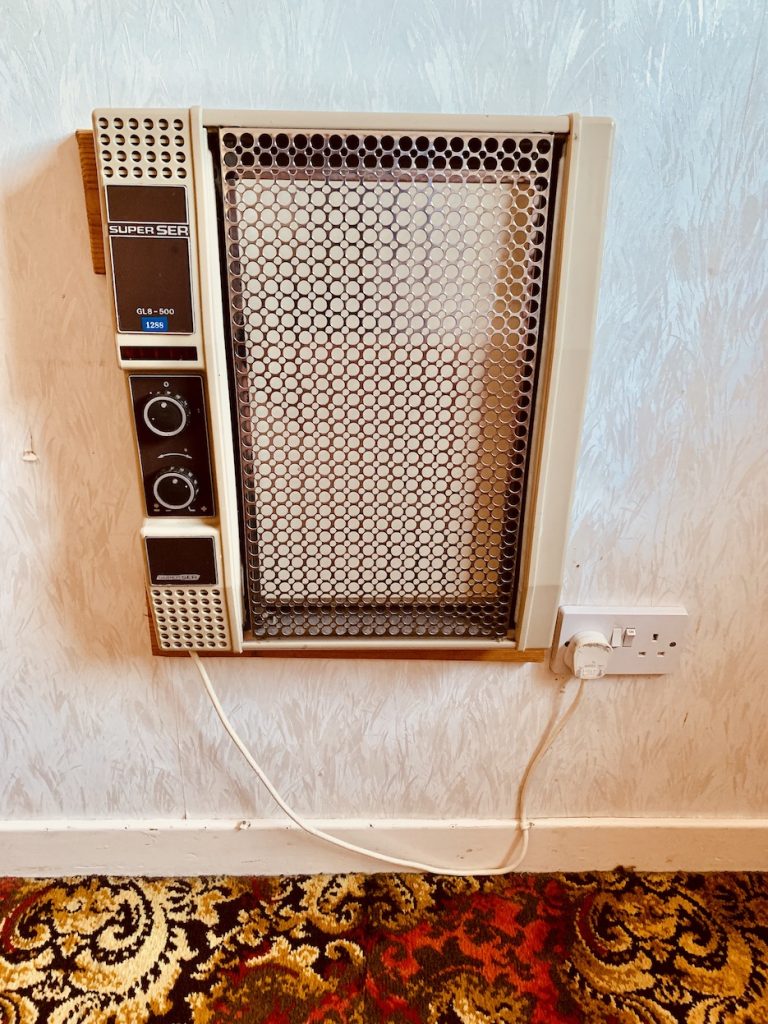 My favourite part of the room was this amazing heater. I was actually half tempted to turn it on and see those metal honeycombs turn bright orange. But alas it was the summer and an unusually sunny day to boot. Besides, according to one reviewer, who nearly froze to death during a stay in the winter, it’s likely the damn thing didn’t even work. 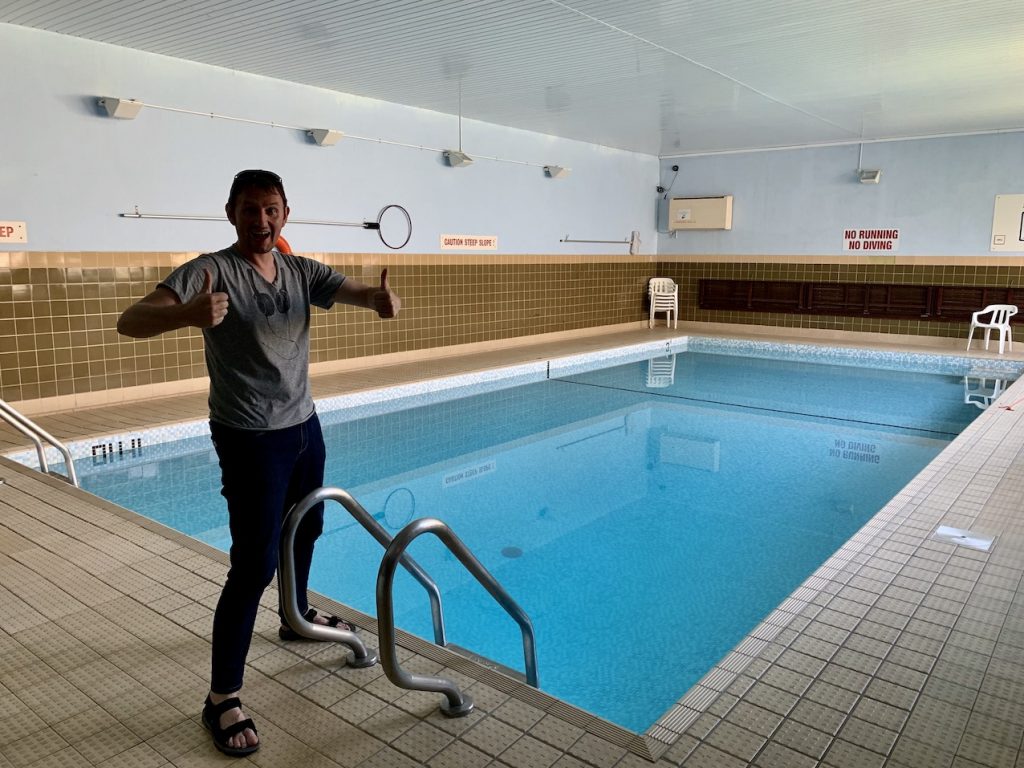 The swimming pool was a revelation! Once again expectations had been low, but on arrival we were like, yeah let’s dive in. 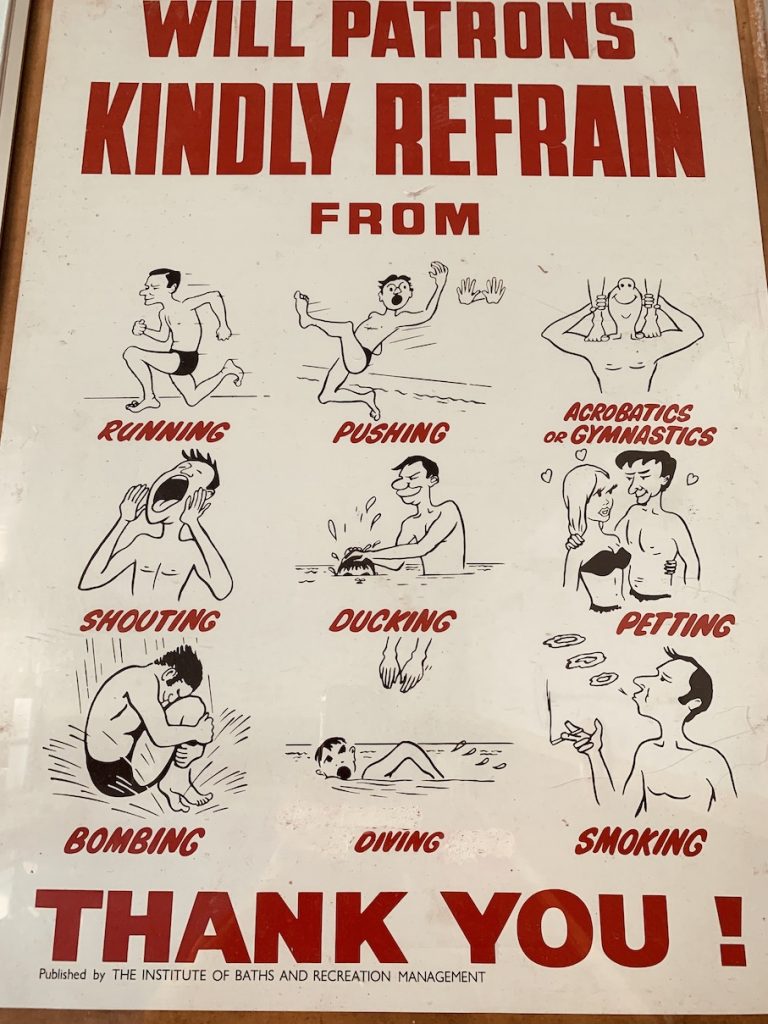 It was especially good to have it to ourselves and again, the dated rules board, warning signs and tatty plastic chairs only added to the fun. 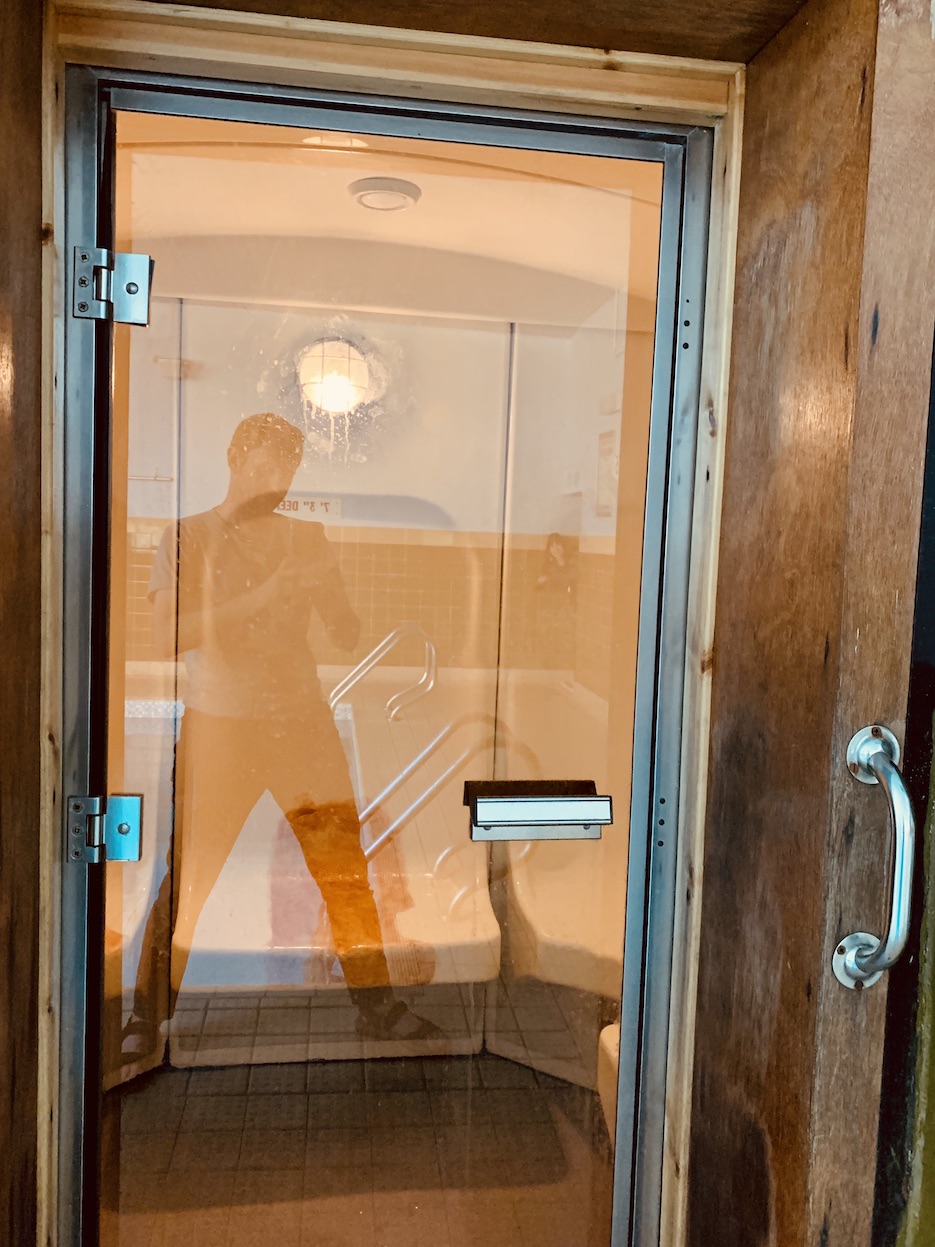 If I was pleased with the pool, then I was borderline ecstatic by the discovery of a steam room. Furthermore, the bloody thing worked! 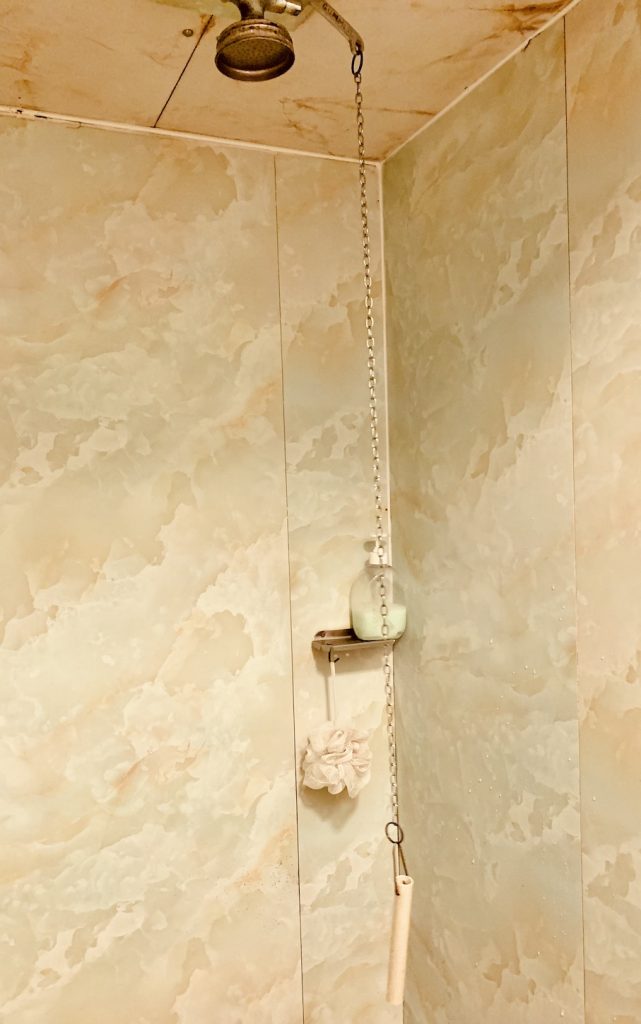 In the bathroom opposite the pool and steam room, the showers are simply unbelievable! In order to get running water, one has to pull the chain. Yes, a bit like when you flush a toilet.

Even better, when you let go of the chain the water immediately stops working! Yup, this reduces the act of showering to a one-armed process. The fact that this system clearly hasn’t been replaced since 1963 is equally shameful and impressive. 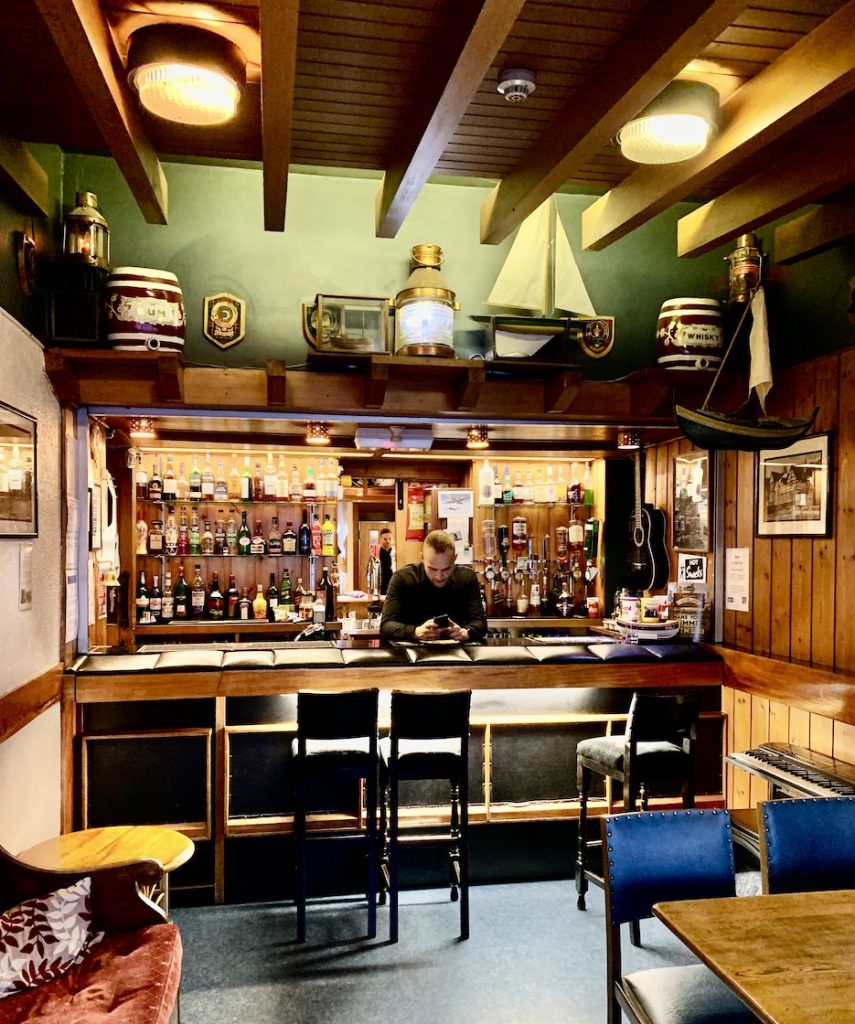 The cocktail bar at The Lancaster Hotel.

Fancy an in-house drink? I suppose I could suggest going to the Cocktail Bar down by the main entrance. But I won’t, because it has all the atmosphere of a morgue, despite a very cutesy nautical theme.

When I first walked in to have a look, there was a local man perched at the bar who shot me a threatening glare as if I’d just mooched into his living room. At the back, there’s an adjoining pub with a pool table, and to be fair the bartender was reasonably friendly. 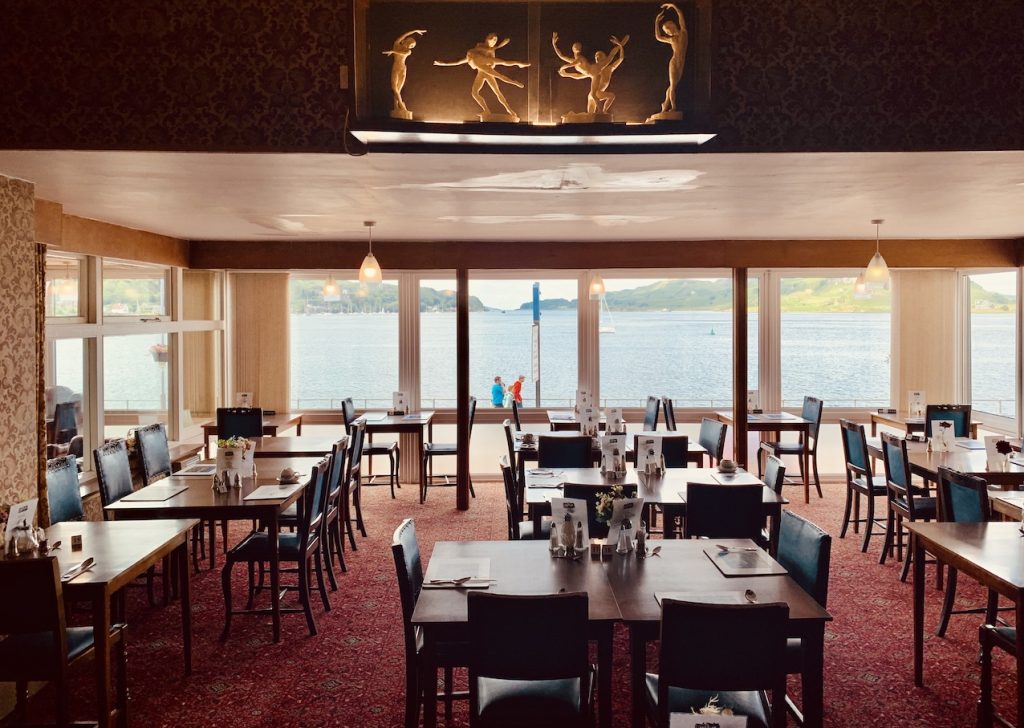 Breakfast takes place here in this large room with excellent window views across Oban Bay. Once again, it’s like stepping into a time warp, with its Overlook Hotel carpet, framed bird sketches and cabinets of 1960s ornaments.

On the morning we took breakfast, the place was packed, barely a free seat in evidence. A team of waitresses sprinted around like mad trying to keep the show going. To complicate matters, their table system was obviously flawed. Our table number was supposed to match our room number, but after a lengthy search aided by one of the waitresses we realised no such table existed. Dear, oh dear. 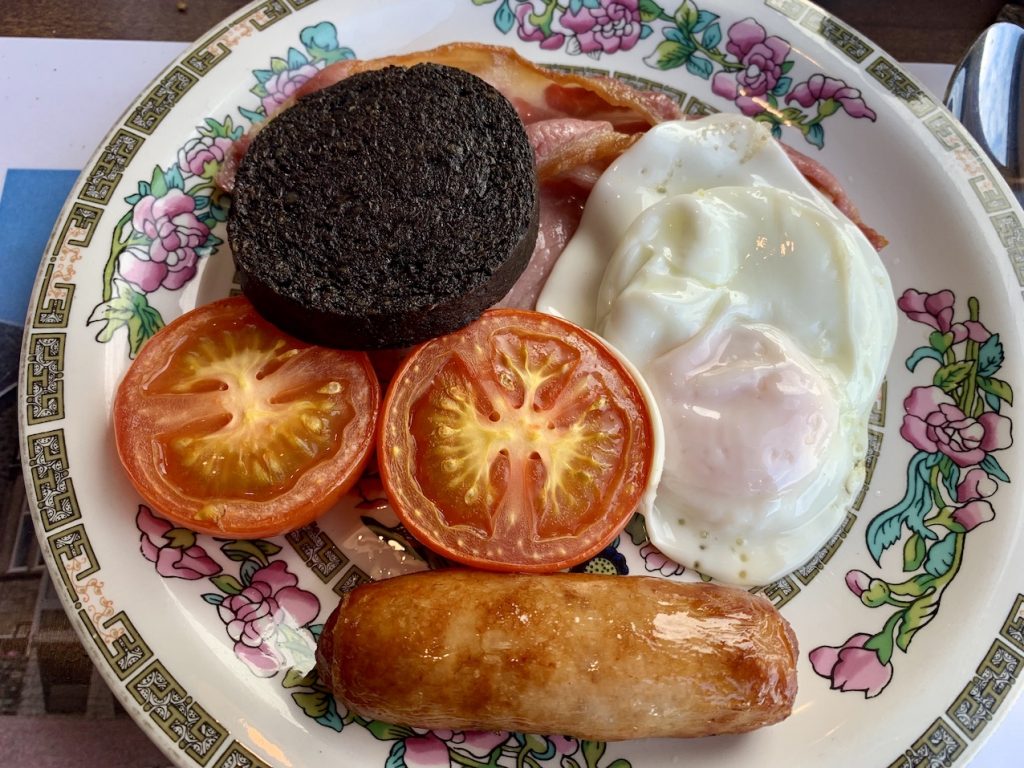 Breakfast at The Lancaster Hotel.

Finally, a waitress cleared a table for us by the window, which was quite a result! What’s more, the breakfast was decent, despite committing the cardinal sin of including two large grilled tomatoes.

As we went to check out that morning, I was in good spirits. Against all the odds I’d enjoyed my stay at The Lancaster and was thinking how harsh all those reviews had been when the asshole at reception swung the pendulum back in the other direction.

Basically, my sister just asked if we could store our bags for a few hours while we took a cruise with Argyll Sea Tours. Rolling his eyes, he dragged himself up from his hiding spot in the corner and answered with a withering “yeeeeees”. Thus I couldn’t help but conclude this has to be a big part of why people despise this place so much.

Would you consider staying at The Lancaster Hotel? Here’s their crappy website.