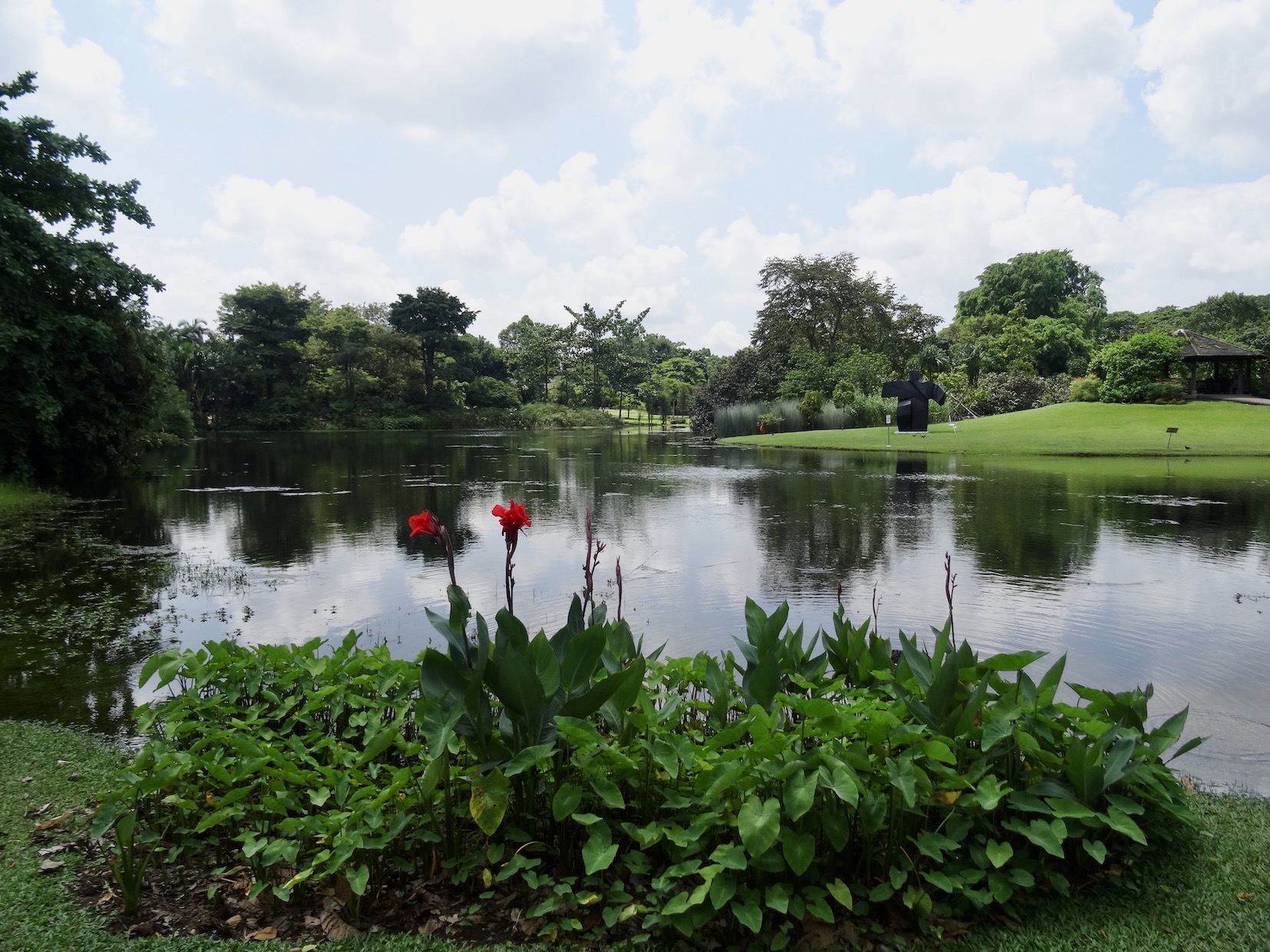 For me, Singapore’s greatest strength as a travel destination is the copious amount of greenery on offer. In fact, wherever you are in this fascinating city nation, it’s likely just around the corner from a leafy park, a meticulous garden or a sweeping mountain trail. If you’ve only got time for one, there’s an excellent case to be made for Singapore Botanic Gardens. Established in 1822, this 60 acre park is truly a sight to behold and currently the only tropical garden in the world to be honoured as a UNESCO World Heritage site. On the day of my visit the gardens were delightfully peaceful. Hence I found myself perfectly alone strolling down Swan Lake, one of three lakes to enjoy. 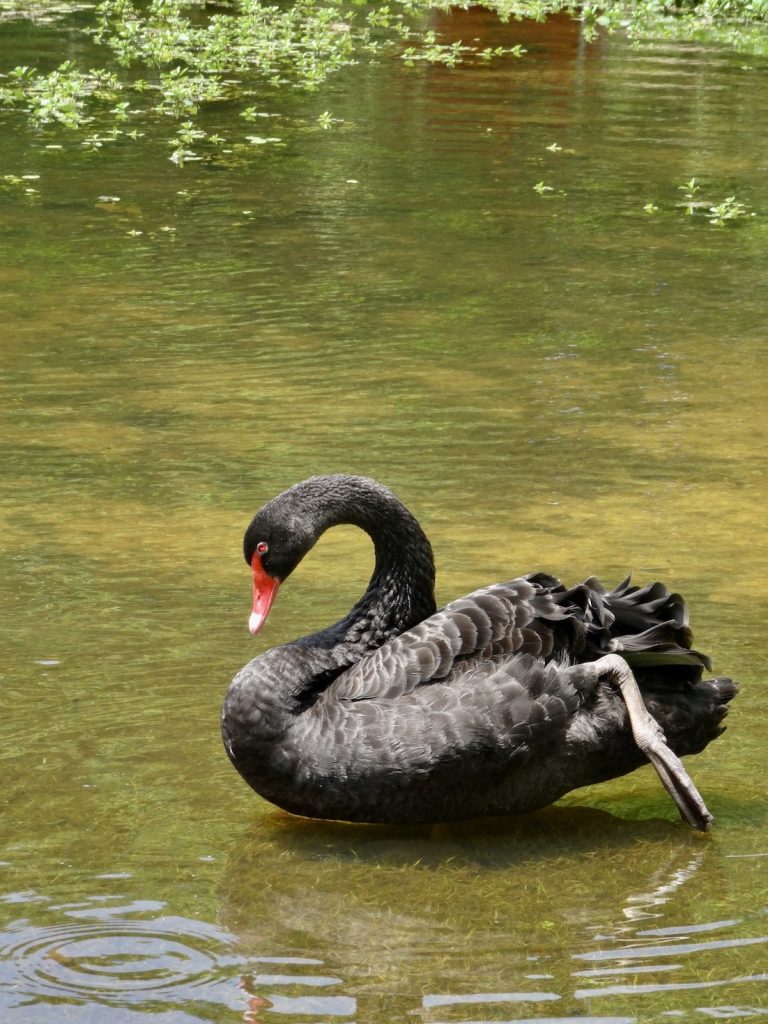 Constructed in 1866, this was the gardens’ first lake and is also the oldest ornamental water feature in Singapore. The nature and wildlife in and around the lake are fantastic! Firstly, you’ll notice a whole host of white and black swans brought over from Amsterdam. You’ll also see plenty of frogs, lizards, a dizzying array of bird life and even a few otters! 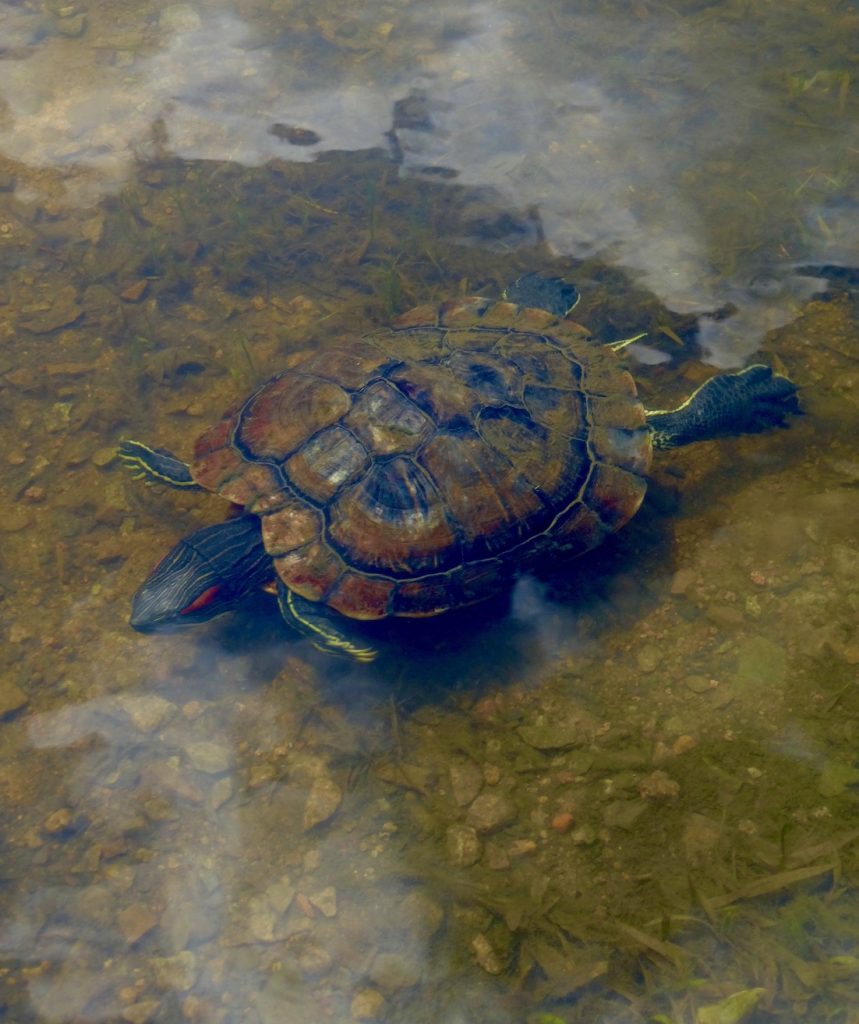 A giant terrapin at Swan Lake.

I spied this giant terrapin swimming in a stretch of shallow water close to the bank. I’m not sure this guy would have survived here back in the 1890s. According to the history books, a huge crocodile came to Swan Lake after breaking free from the zoo. Moreover, the fearsome beast’s bloodthirsty antics eventually resulted in the entire lake being drained in order to capture it! 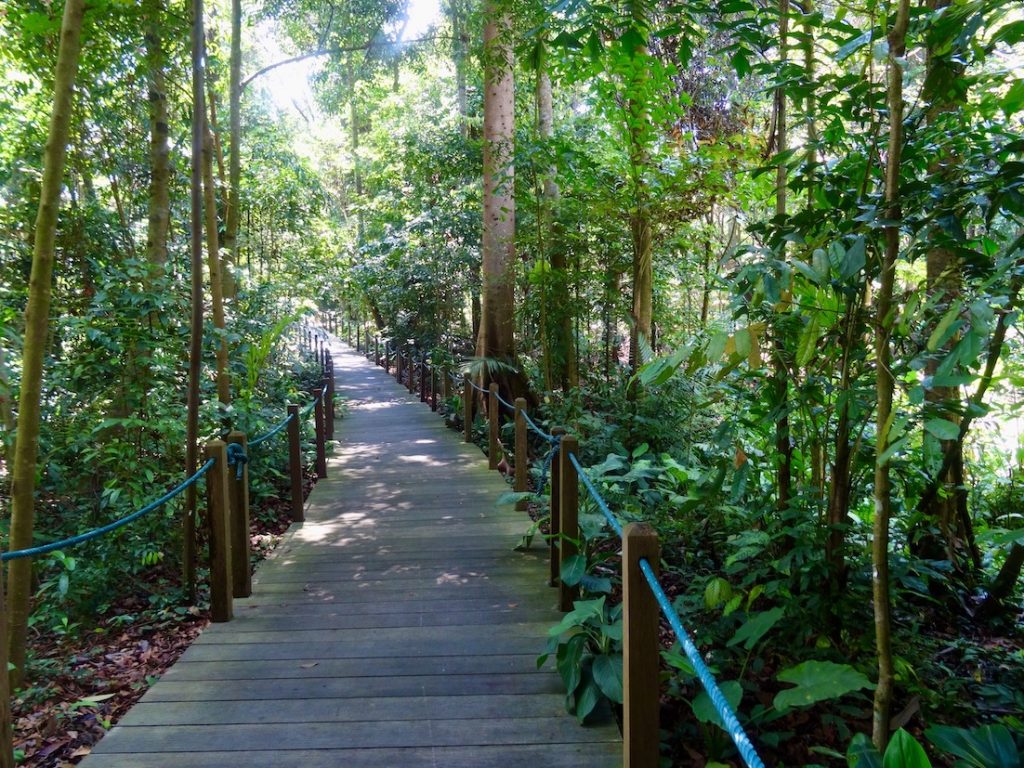 I don’t think I have ever visited such a lovingly sculpted and spotless complex of public gardens. There are seemingly endless walking paths to choose from, all of which feature benches, water fountains, sculptures and info boards relating to the plants and flowers. Most impressive of all however is The Rainforest Trail, a boardwalk path that spans around six hectares. 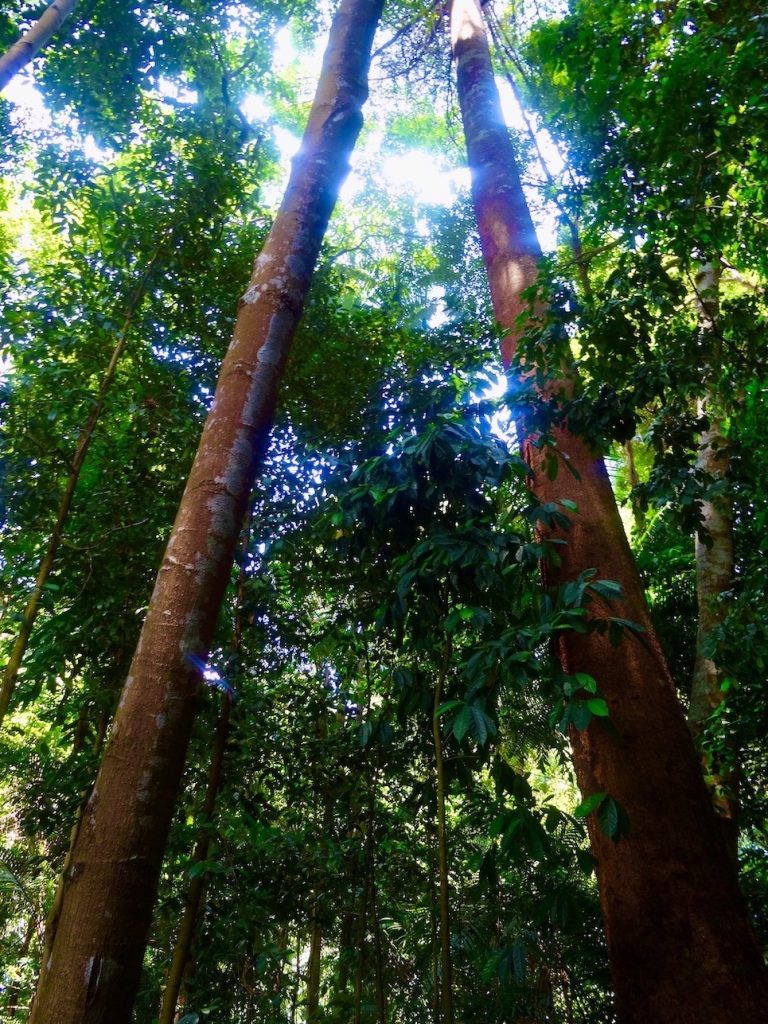 This is one of the oldest remnants of primary rainforests in Singapore. As such, over 80% of its plant species are rare or endangered. 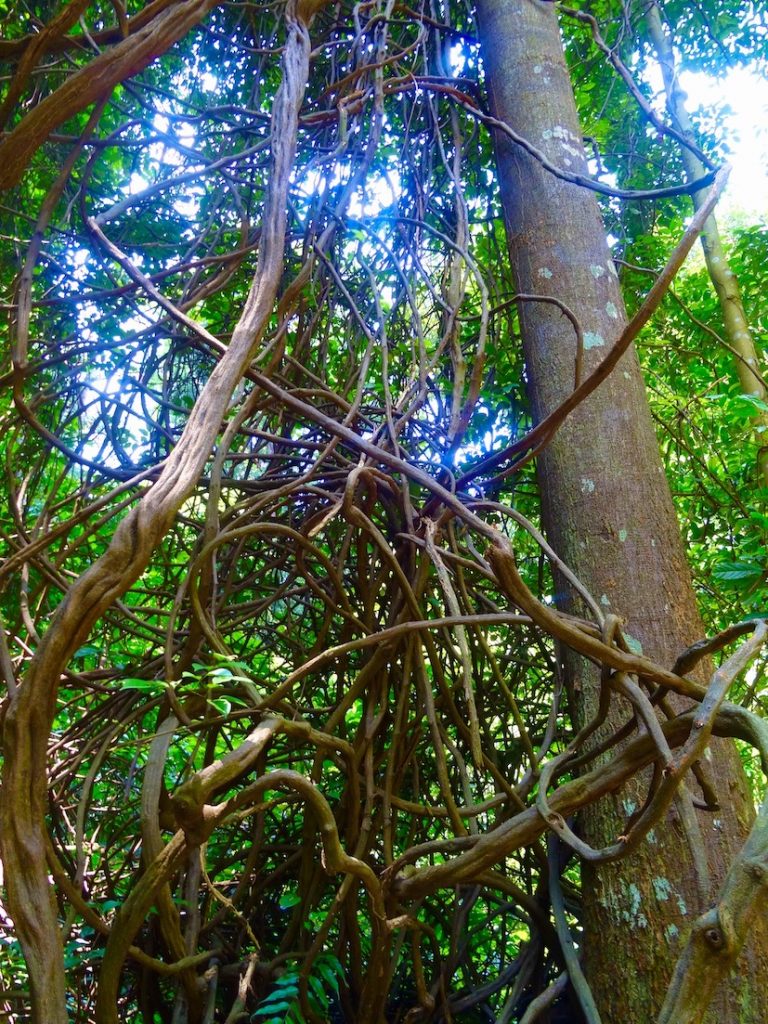 There are three layers of trees here and some of them are wonderfully crooked, knotted and undisciplined. Tree lovers will note a wide range of gorgeous species, including ferns, strangling fig, leaf litter plants and white gutta trees. 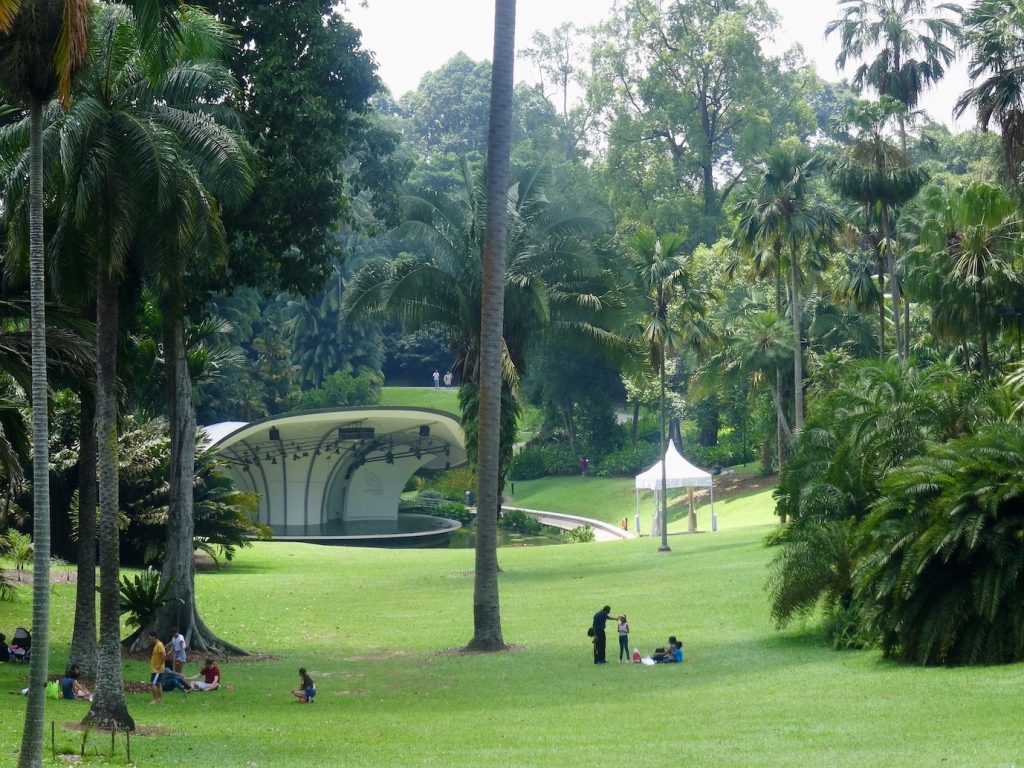 Emerging from the rainforest, I found myself following a path that leads to an open expanse of park by Symphony Lake. This is where people flock on weekends to catch one of the many free concerts put on by The Singapore Symphony Orchestra. 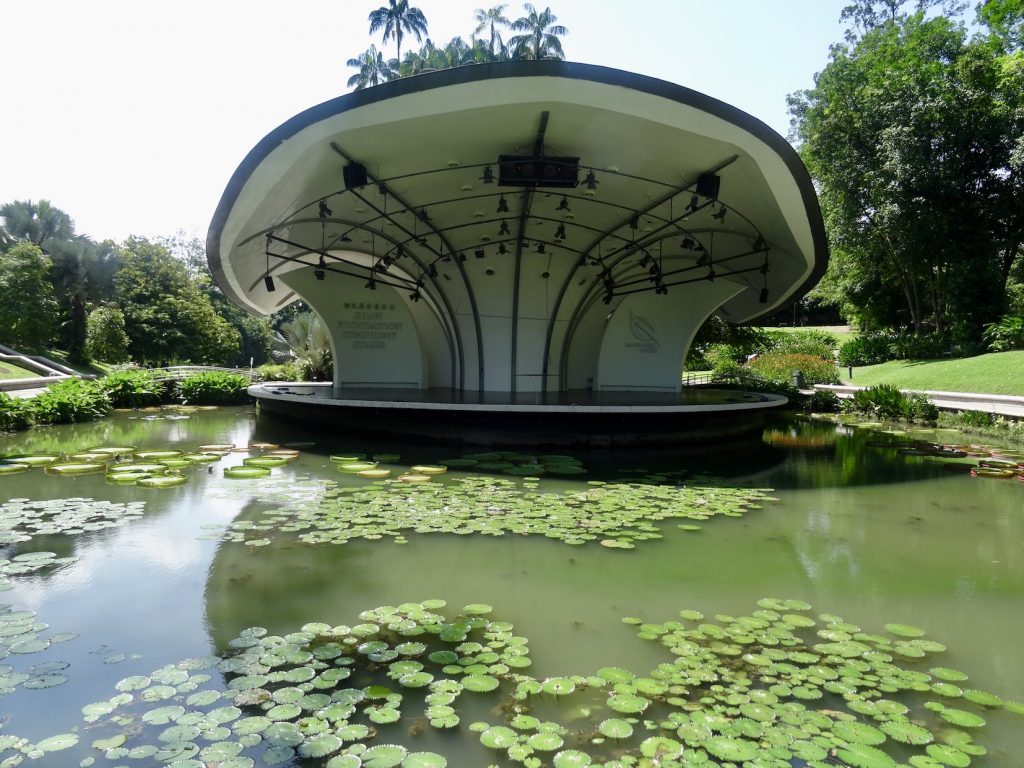 Live performances take place on the shell-shaped Symphony Stage, just west of the visitor centre. Time your visits for a weekend show and who knows what you’ll catch. Possibly a bit of Mozart or Tchaikovsky, maybe a full rendition of John Williams’ rousing Indiana Jones score! 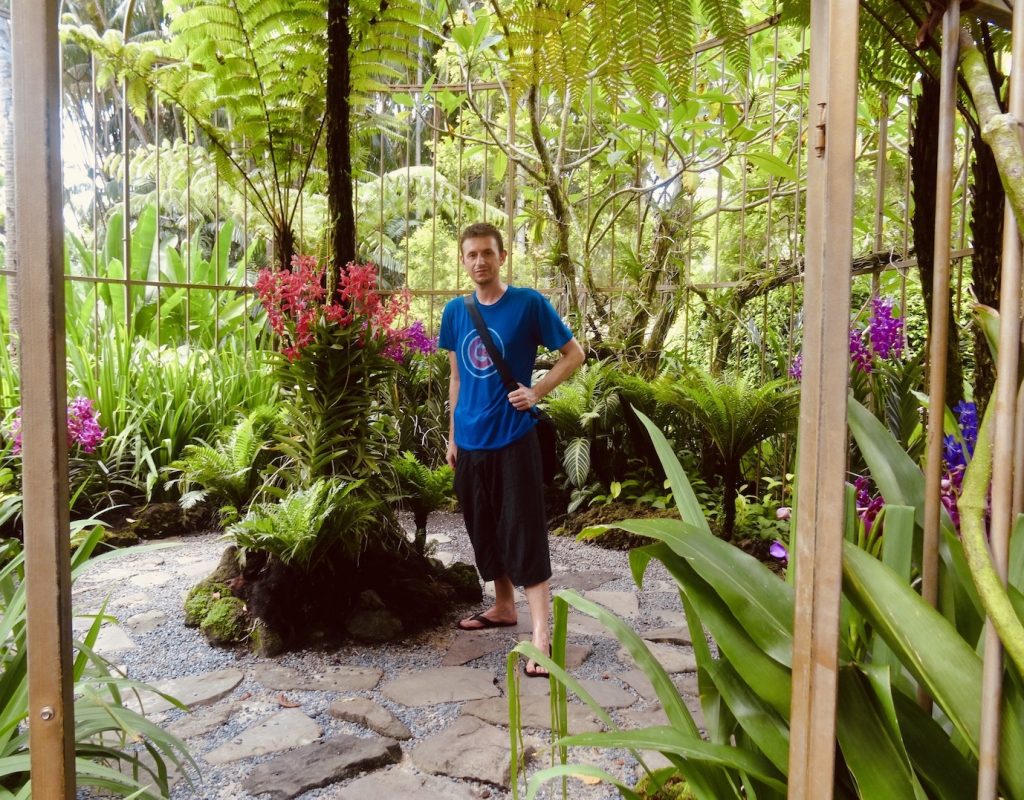 While the gardens themselves are free to enter, visitors will need a ticket for The National Orchid Garden, added to the complex in 1995. Priced at just $5 for adults and with discounts for students, seniors and children, it would be almost criminal not to see this wondrous garden. 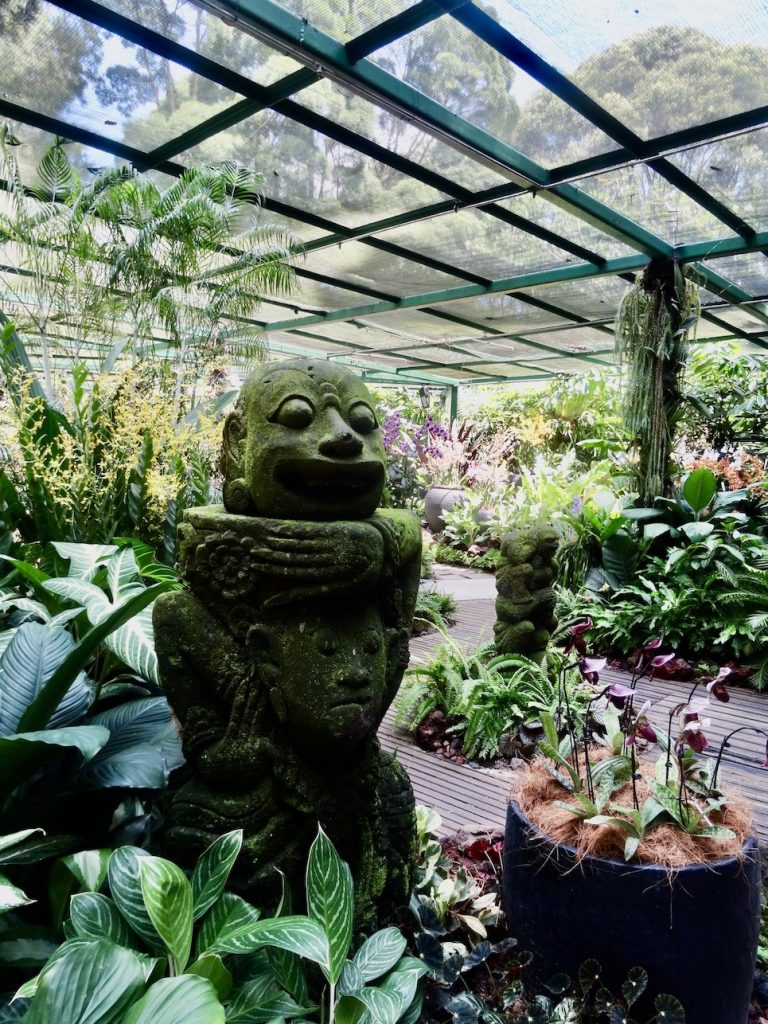 Located on a hill, the garden is actually series of green spaces dedicated to the orchid. There are thousands of them here, lining the paths and bursting out of mist rooms, greenhouses and gazebos. 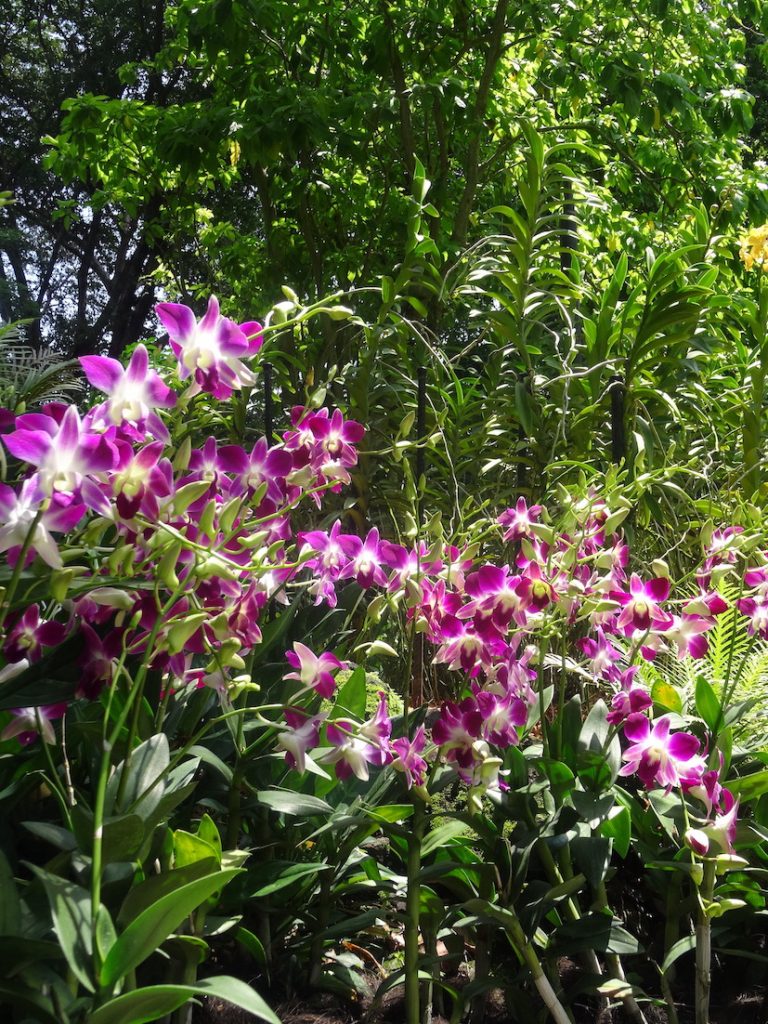 Furthermore, the gardeners have split their creations into seasonal zones. The summer zone, for example, mostly showcases strong reds, pinks and purples. 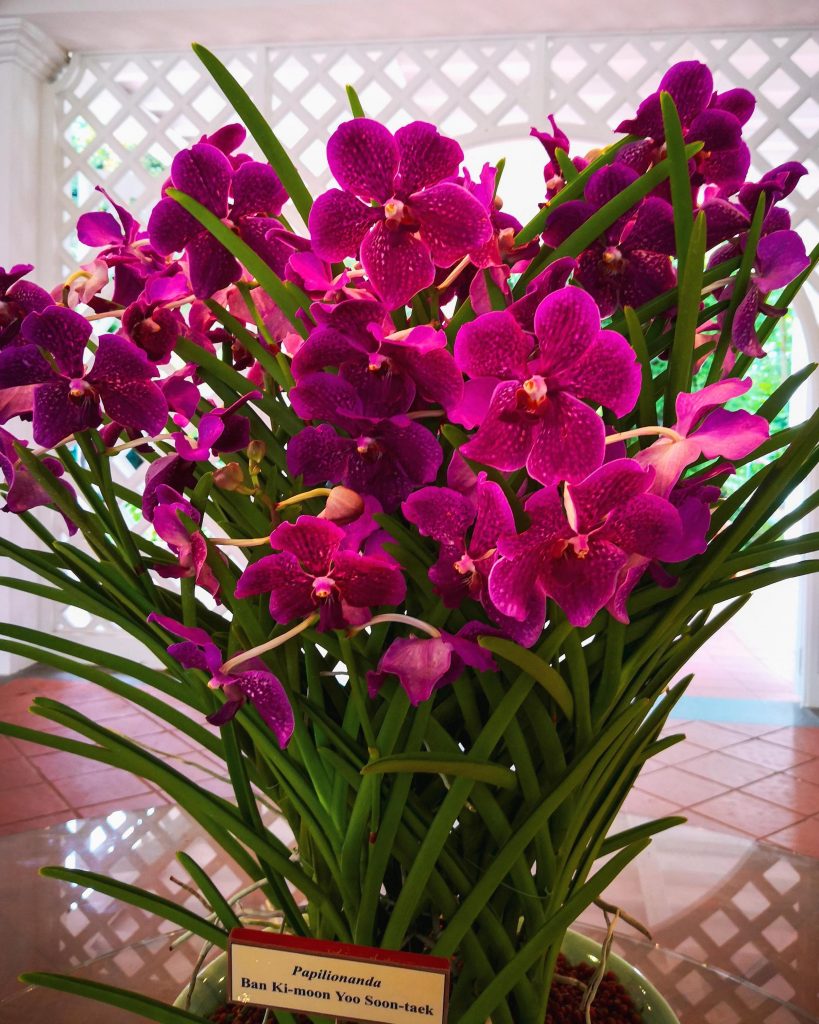 The garden also has an enclosure honouring notable public figures. The arrangements have been specially made in tribute to “people who have made significant contributions to society”. The above presentation was for former Secretary-General Ban Ki-moon, who came in person to receive his tribute in March, 2012. Other orchids are in appreciation of Princess Diana, Jackie Chan and Andre Bocelli. 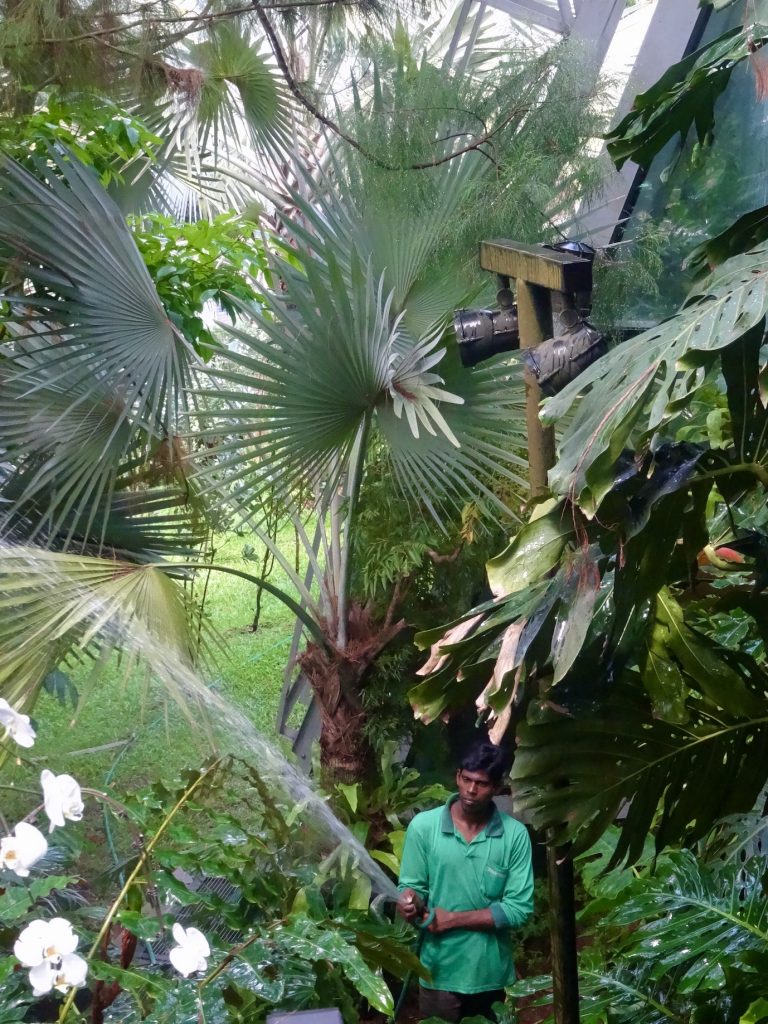 Most fascinating of all, a large section of the garden stands as the country’s National Orchid Farm. This is where a team of farmers cultivate the stupendous Hybrid Climbing Orchid, Singapore’s national flower. From a distance, you can  see workers watering, misting, pruning and treating the soil. Pretty cool. 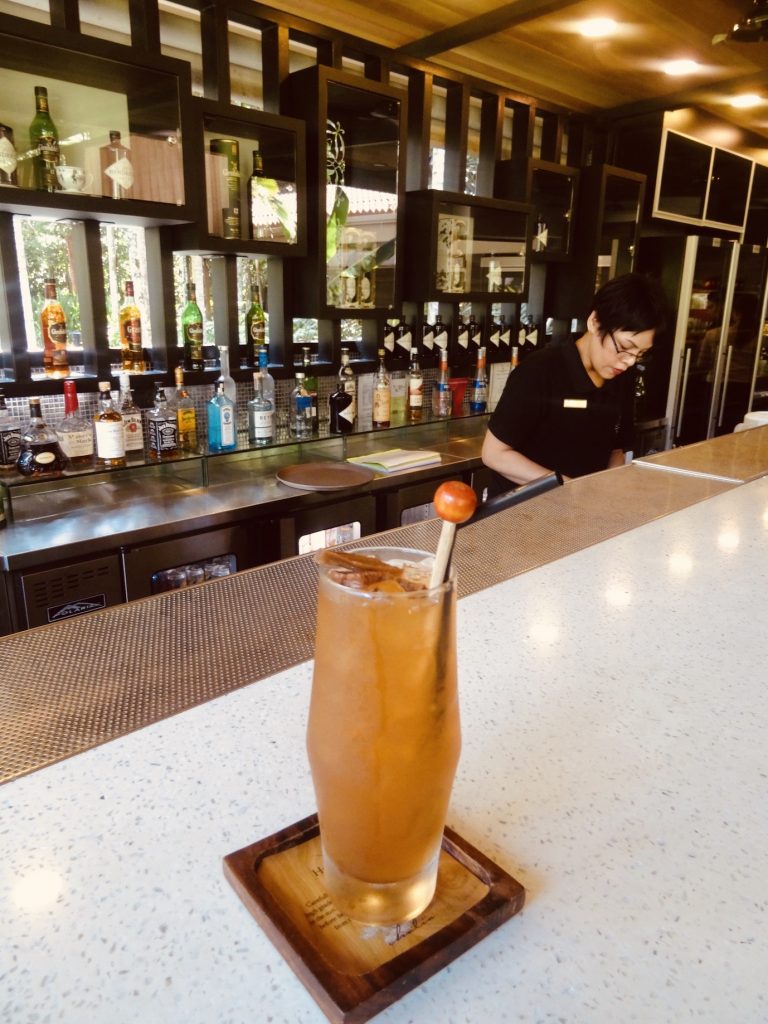 The bar and restaurant at The Ginger Garden.

I finished up my afternoon’s explorations in the Ginger Garden. Here they have two hundred and fifty odd species of plants from the pungent Zingiberacae family. Best of all, you can take a load off at the fancy Halia Restaurant. My drink of choice? A Ginger & Honey Sling of course!

For an alternative view of Singapore Botanic Gardens, check out this cool blog post by thewanderblogger.

Why not read more of my travel reports from around Singapore.