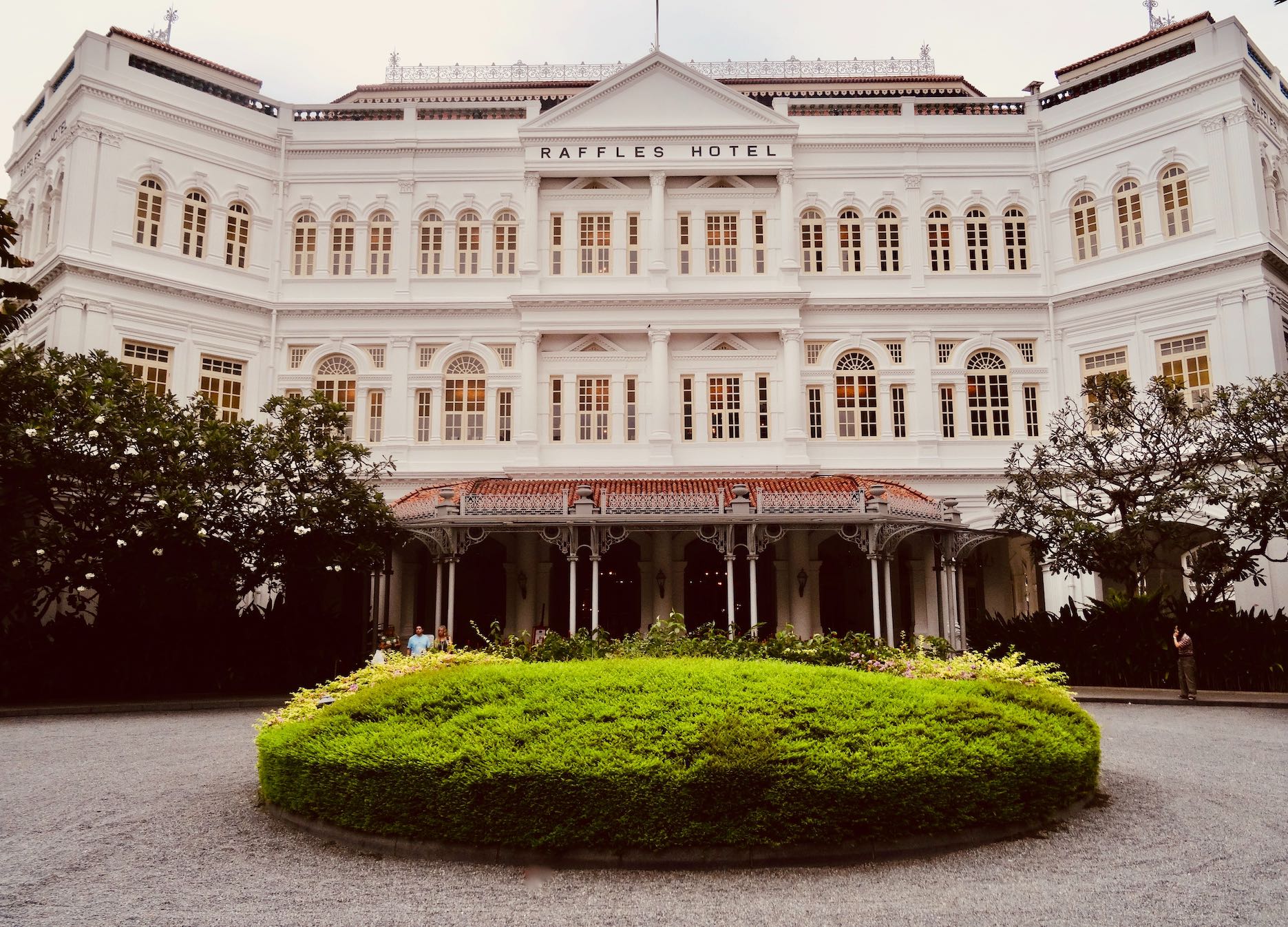 May 2015. Visitors to Singapore should set aside an hour or so for a wander around one of the world’s most impressive colonial hotels. Located on Beach Road, you just can’t miss Raffles, a colossal, whiter-than-white structure that simply oozes the weight of its own history. 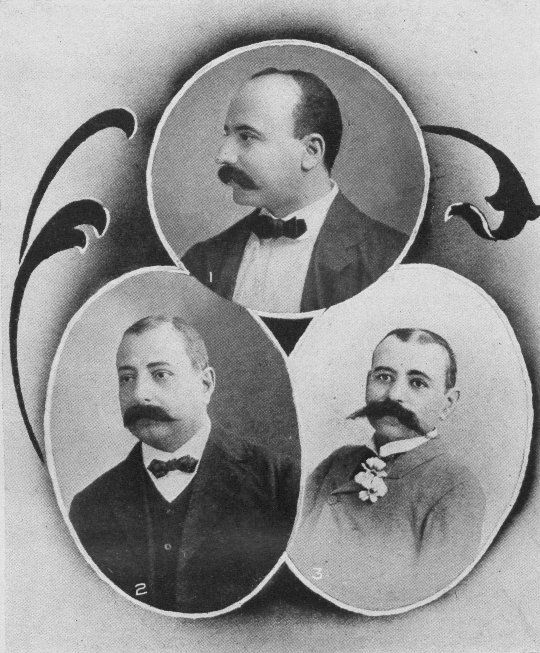 The Sarkies: Loved a moustache.

The hotel opened in 1887 under the ownership of the The Sarkie Brothers, famed for founding a bunch of luxury hotels across Southeast Asia. When it came to Raffles, their motto was: “Patronised by nobility, loved by all”. It was named after Sir Thomas Stamford Raffles, the founder of Singapore. 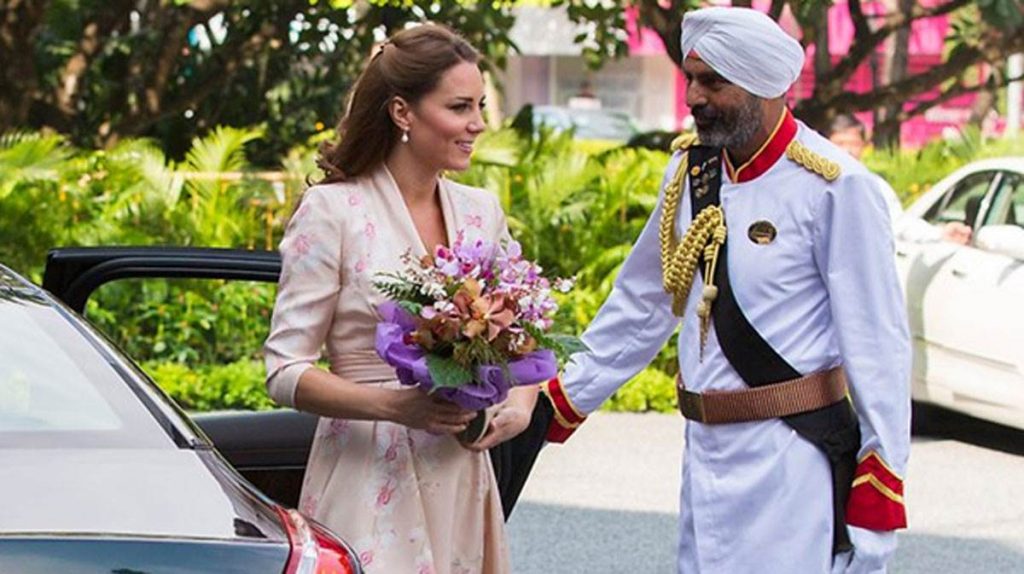 Raffles takes immense pride in keeping the spirit of colonial Asia alive and well. You can see it in the authentic wooden furniture and fancy silverware, some of which dates right back to its opening heyday. What’s more, they still employs a dedicated team of Sikh doormen, the first to greet guests on arrival.

They carry luggage and help with check-in, in addition to showing guests to their rooms. Moreover, these tireless Raffles ambassadors are available for advice on what to see and do in the city. The senior doorman is Mr. Narajan Sing, who’s been at Raffles for over twenty-five years! In 2017 he found himself shortlisted for Best Iconic Employee at the Worldwide Hospitality Awards. 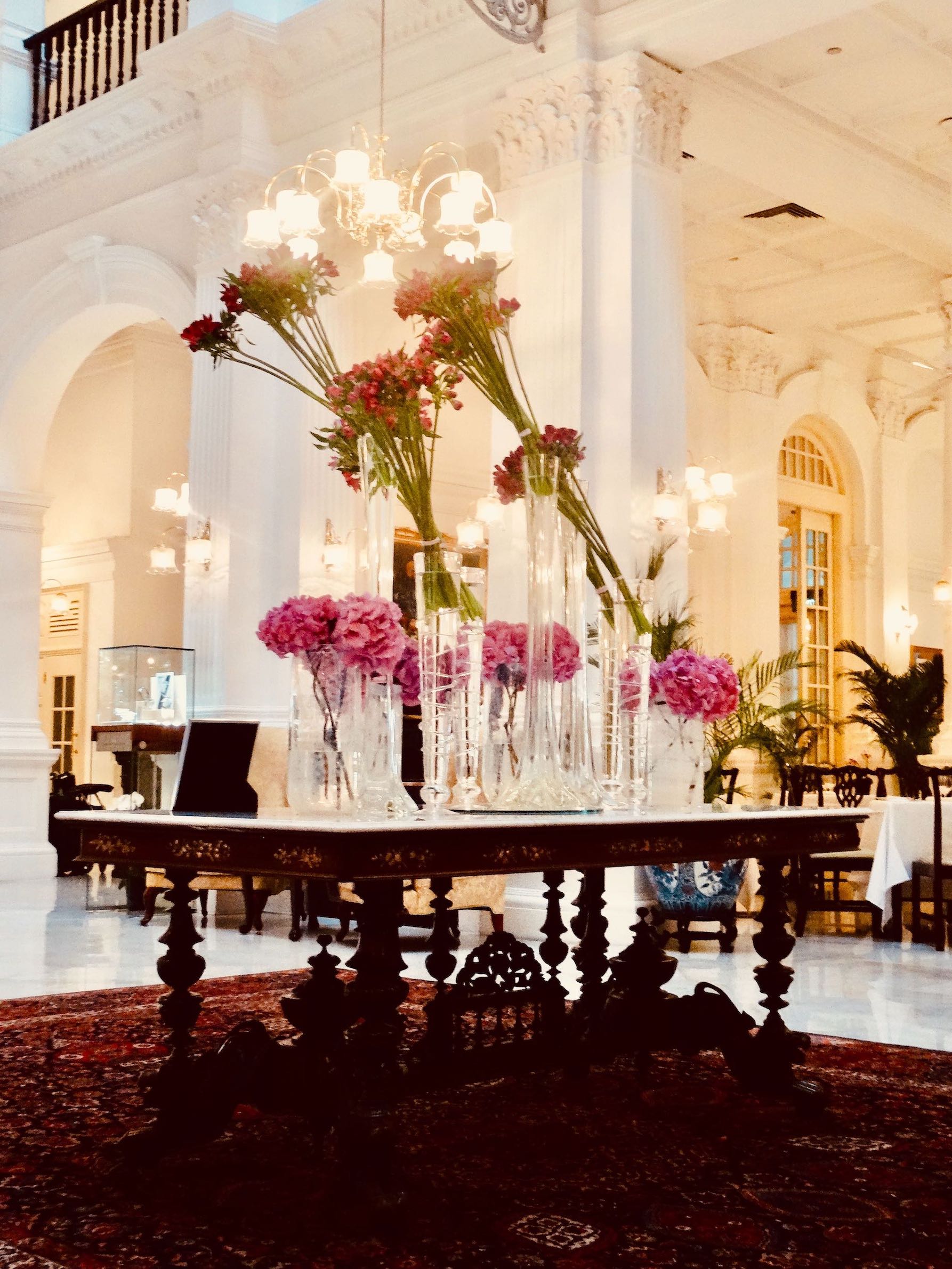 I’d read somewhere that non-guests who enter the lobby from the main door are rapidly hunted down and politely asked to re-enter via a discreet side door! All part of the colonial, elitist charm I suppose!

Luckily for me I was left alone as I sauntered in, had a look around and grabbed the shot I needed. Feeling confident, I even dared to drop myself into a comfy leather armchair to watch the beautiful people come and go. Maybe they could tell I was hardcore British Empire. 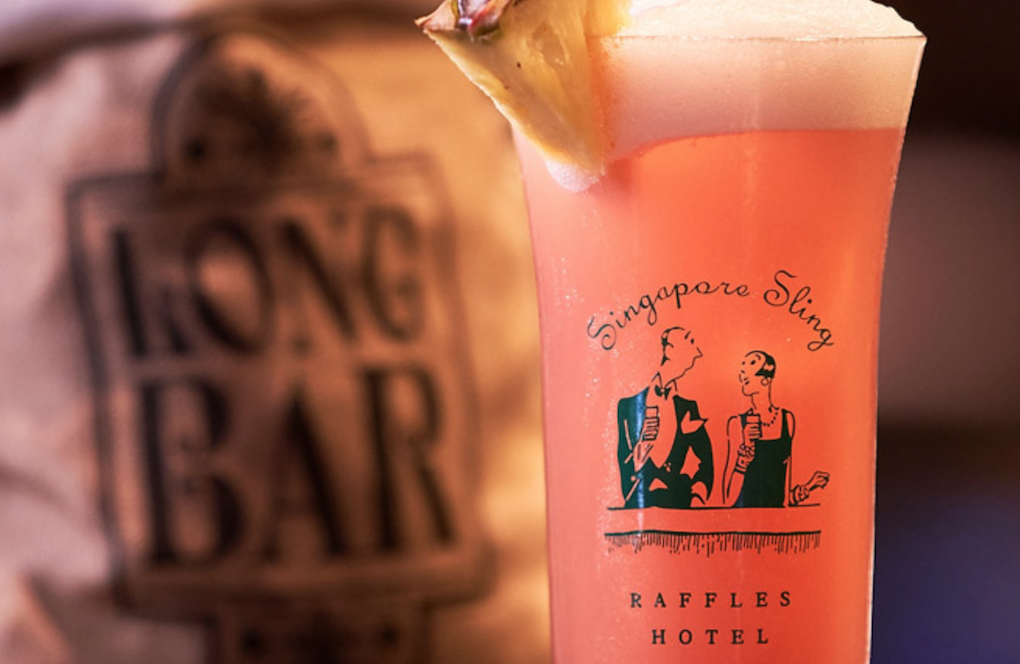 Many people come to Raffles just to seek out The Long Bar for a Singapore Sling. In fact, it was legendary Raffles bartender Ngiam Tong Boon who invented the world famous cocktail right here. Just grab a chair, sit back and imagine the likes of Rudyard Kipling, Michael Jackson, Karl Lagerfeld and George Bush kicking back here over drinks and nibbles. 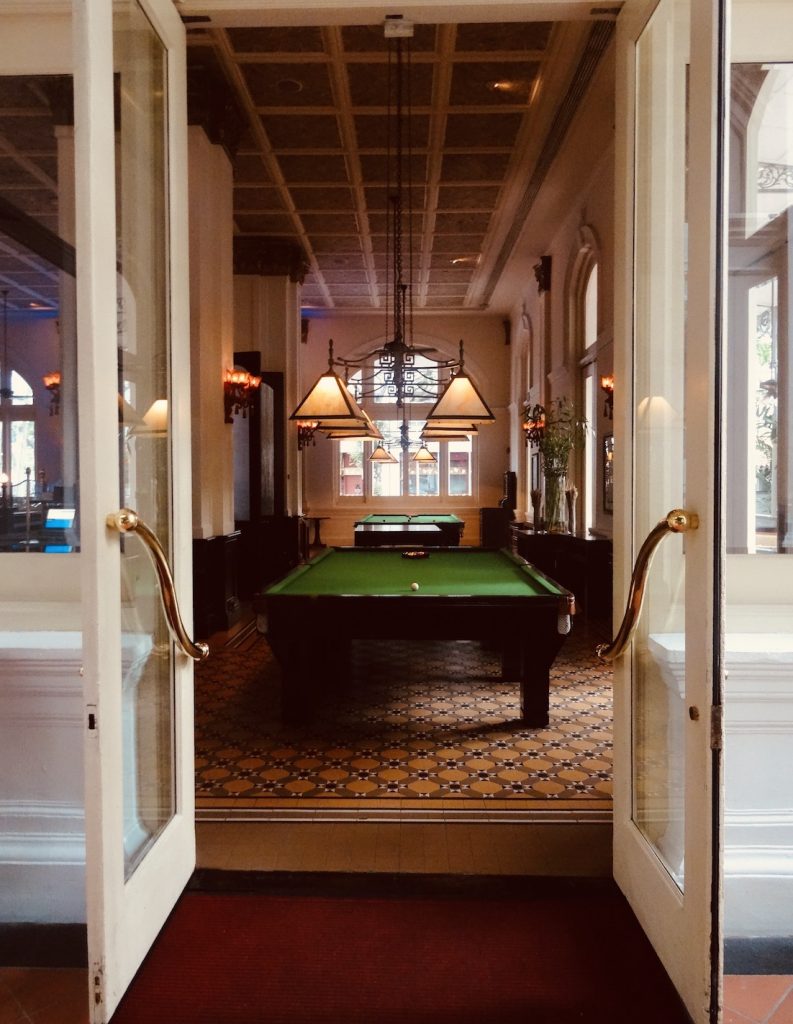 The adjoining Billiards Room meanwhile has a colourful backstory. Legend has it an escaped zoo tiger ran through the hotel grounds in 1902 before seeking refuge under the billiards table. Having unwittingly backed itself into an inescapable corner, the beast had to be shot five times before it finally died.

Where To Stay in Singapore. 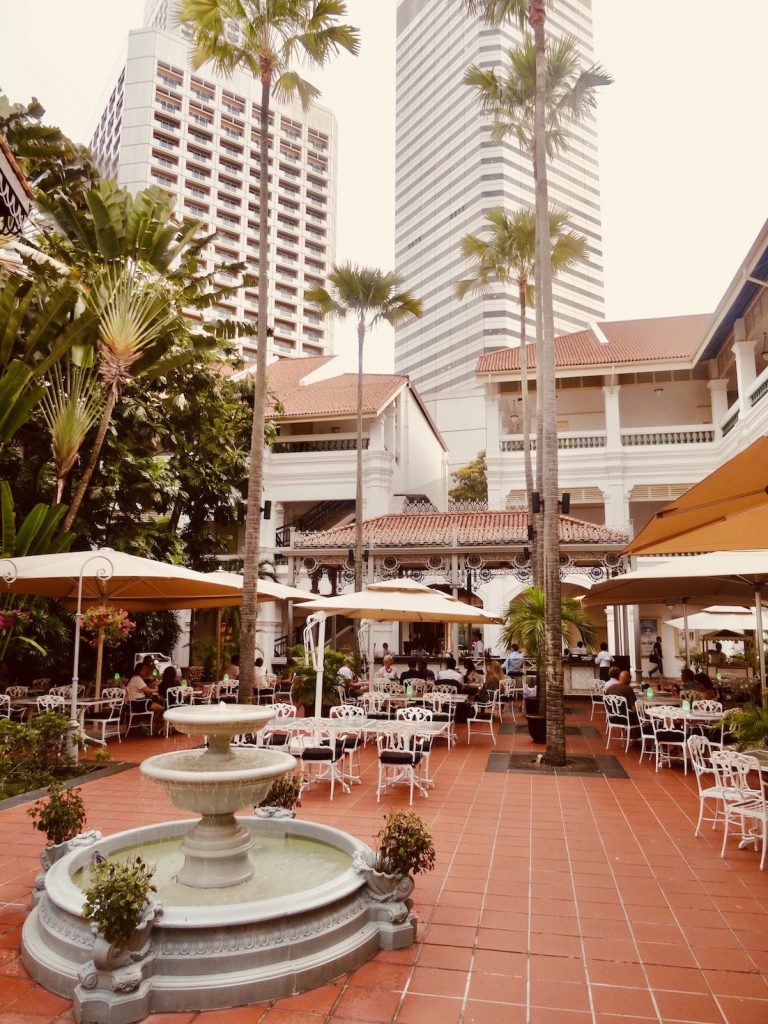 If the weather permits, and it usually does in Singapore, why not order a dish at the hotel’s courtyard restaurant and patio bar. The menu specialises in Italian fare, while you can watch the bartenders shaking your cocktail at the gazebo bar.

If I ever come back to Singapore, I’d certainly love to treat myself to a night or two at Raffles. For all their luxurious accommodation options, head to the official website.

Like this? Why not check out more travel reports from around Singapore.