It was a characteristically sweltering late afternoon in Siem Reap as Sladja and I made our way through the large entrance gates of Georges Restaurant and Distillery. Rays of sunshine slanted through the jungle garden in all directions as a pair of smiling Khmer ladies came out to greet us.

“Hellooo!” they sang in unison, smartly dressed in their black Georges t-shirts. Already I had a warm feeling, the same impression I’d gotten from Sebastien during our online chats. “Hi, I’m Leighton. Is Tom Cruise around?” 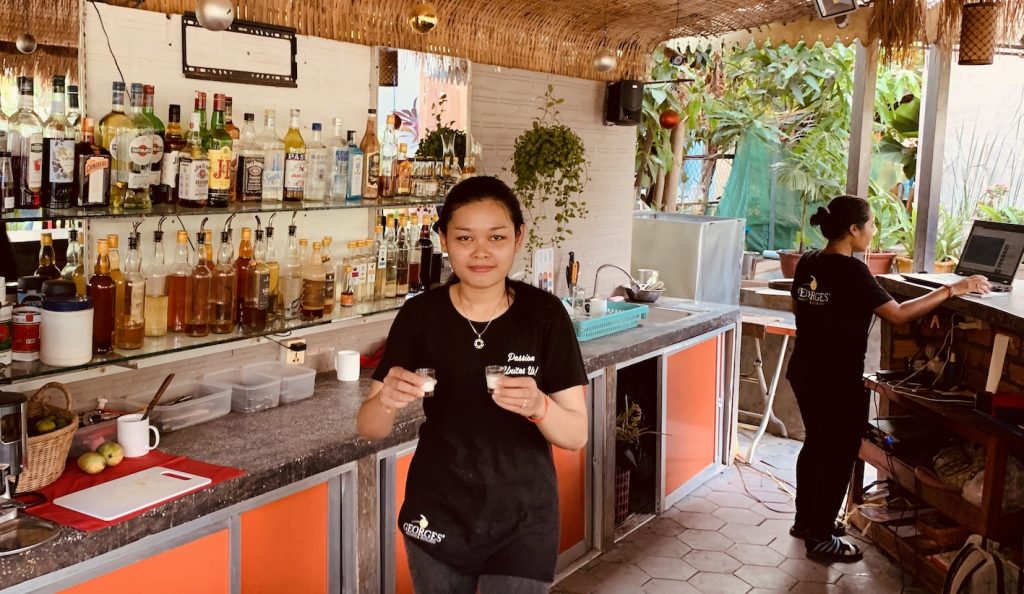 One of the girls hurried off to find Mr. Cruise, while the other led us to the garden’s very cool tropical island style beach bar. In fact, just the kind of bar Tom Cruise strutted his stuff in for the movie Cocktail back in 1988!

Our remaining hostess wasted no time in bringing us two shots of coconut rum. Her name, we learned, is Srey Nich and she’s been with the Georges family for just over a year. “Mmm, down the hatch!” This was our first taste of their famous rum and damn it was good! 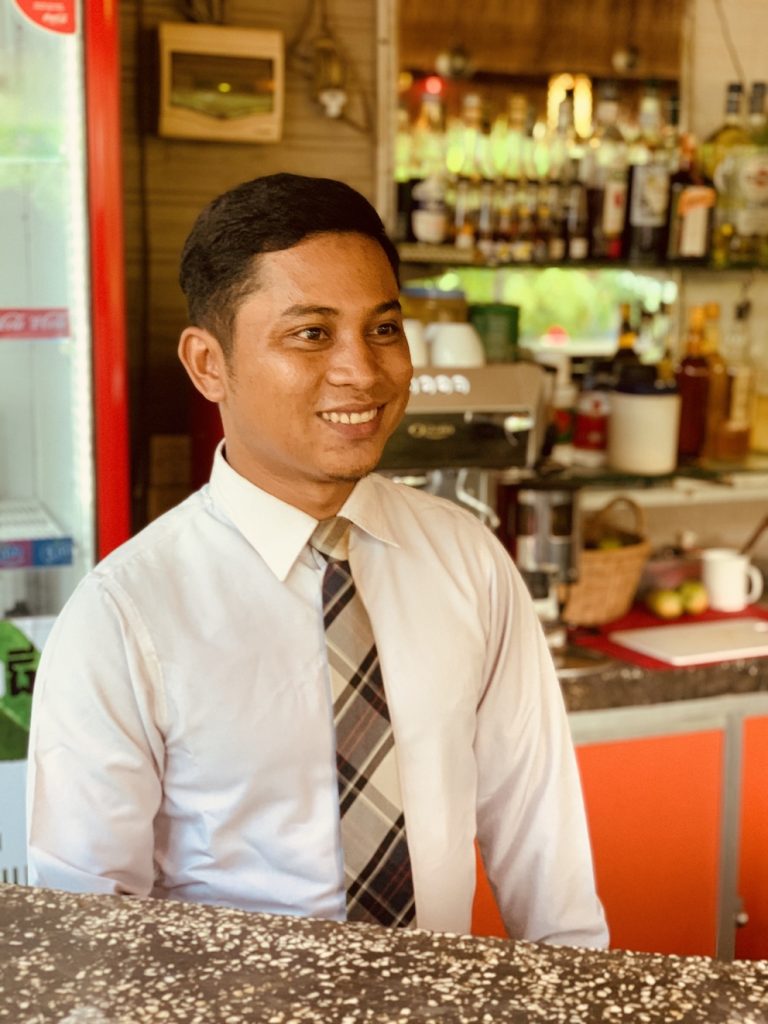 Cambodia’s very own Tom Cruise exuded a genuine warmth from the moment we met him and made our introductions. “Welcome to Georges” he said, with a smile.

Relaxed, considered and softly spoken, Tom explained how, as Operations Manager, he would be our guide for the evening. And moreover, that he was going to give us “the full Georges experience”.

But wait (!). Before we began, there was a pressing question and I just had to get it off my chest. “How did you come to be called Tom Cruise?” I asked, trying to conceal my smirk. 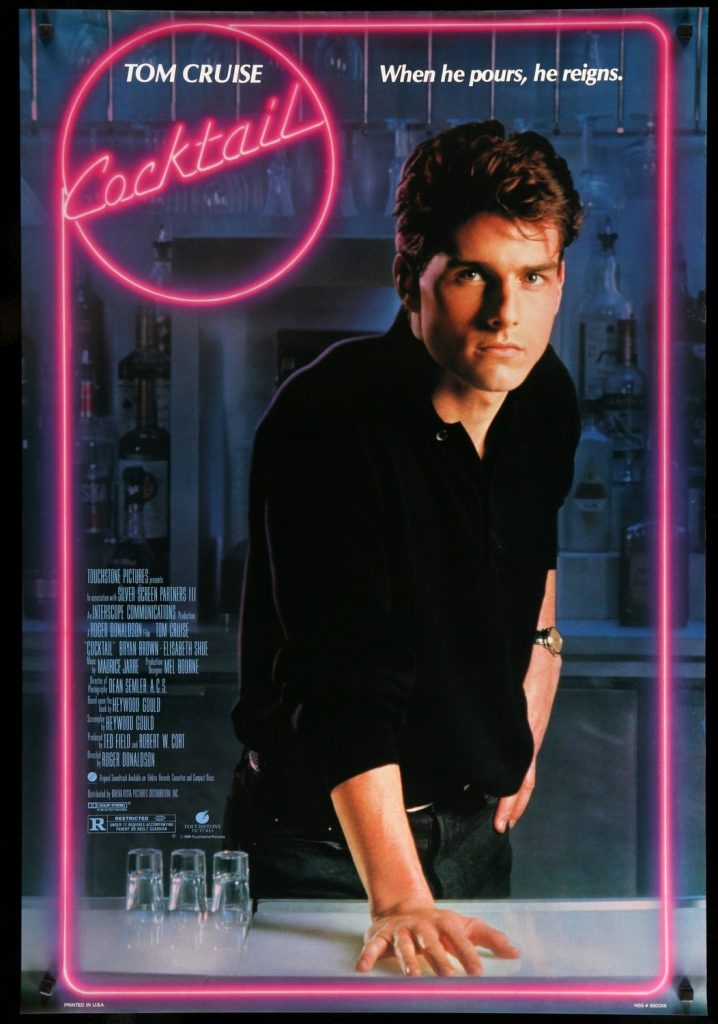 “You want some rum?”

“Well, I love that movie Cocktail! I really identify with Tom’s character, Brian. How he has all those interviews and gets rejected by everyone. He goes back to school, betters himself, follows his dreams, stops at nothing to succeed. I feel like it’s the same as my life”. This, along with his dedication and skill in mixing cocktails, led to the nickname.

“I gave him the name” laughed Sebastien. “Once we finished the roof on the bar, I thought that’s it, he’s Tom Cruise!”

Georges is a French-Asian bistro and rum distillery located in the Salakamreuk neighbourhood of Siem Reap. Inside, Tom reaffirmed the key parts of the story I’d been researching. That Georges Fevrier opened the restaurant in 2013 at a time when Cambodia “felt like the far west, the last frontier where you could start with nothing and maybe strike gold”.

The Fevrier family hails from Réunion, a French island situated between Madagascar and Mauritius. The idea was to offer beloved family recipes, along with their cherished, home-brewed rum. Soon after opening, Papa Fevrier handed the reigns over to his son Sebastien.

“We make rum in a very artisanal way. It’s really satisfying when people come here mainly for the rum!”

It was Sebastien who approached me about doing an article. And boy oh boy did his passion for Georges come literally bursting out of my computer screen. Picking up what his father had started, he channelled all his energies into making Georges the best it could possibly be.

However, Sebastien has certainly experienced more than his fair share of challenges, “just about everything you could imagine”. In Siem Reap, he says, everything evolves rapidly and the market is forever changing. “If you relax, you’re dead without even knowing it”.

“Dad still comes back from time to time, so we can bicker about the dishes”.

As challenges go, the unwelcome arrival of Coronavirus is quite a biggie. Thus Sebastien and the extended Georges family find themselves pouring their hearts and souls into keeping the place afloat during these turbulent times. “It’s been devastating” he admitted. “We can only do our best to survive and hope for a change of circumstance”.

The Rum Experience at George Restaurant and Distillery.

From the restaurant interior, Tom Cruise led us back through the garden and into the Distillery & Showroom. In addition to dinner and drinks, visitors can also immerse themselves in the Georges Rum Experience! It was Tom himself who talked us through the complex rum making process.

With a presentation that was educational, fun and interactive, we learned about the history of rum and how the team makes their flavours using local, organic sugarcane. You can take a look at the sugarcane juice extractor and hear about the fermentation, distillation and maturation processes. It’s even possible to make your own rum!

What they won’t tell you however, is their all-important secret ingredient. In fact, Tom was keen to point out that only Sebastien knows… and he ain’t telling.

Committed to protecting the environment, Georges is also a strong advocator of eco-friendly packaging for all their products. Thus you won’t be seeing any plastic here!

Back in the restaurant, it was time for us to peruse the menus and decide on what to have for dinner. In the meantime, Srey Nich reappeared with a complimentary rum platter of 12 Georges flavours!

They come on a beautifully presented board that features a guide map so you know what’s what. My favourites were the Coffee (naturally), Caramel and Cinnamon. Sladja loved the Kaffir Lime, Tamarind and French Fusion.

Currently, customers can choose between either the rum platter or two glasses of your favourite rum flavours, free with every meal! It’s a special Georges promotion during the crisis, which Sebastien calls “support rum for all!”

This side of the business really comes from the heart, as they say. According to Sebastien, they lose money on the rum, but he couldn’t even consider continuing Georges without it. “To make money, we should sell it at rate of about 25% higher than we do”.

Despite having plenty of rum, Tom Cruise wasn’t going to let us leave Georges without sampling a pair of his best cocktails. These things were really something else!

Sladja had the Coco Kiss, a tantalising concoction of coconut rum, fresh watermelon juice and milk. I opted for the S’vayk’chey, with mango rum, mango and lime juice, milk and mint syrup. It was phenomenal, like an After Eight drink!

Our starters at George Restaurant.

Our food that night was simply fantastic! We started with a couple of appetisers. Firstly, a plate of French baguette slices with Reblochon melted cheese. They come with three little pots of homemade jam.

Then we swiftly set to work on the Goat Cheese Bruschetta. It was tough choosing from the many appetizer options, including The Smoked Duck Salad, Sebastien’s top pick.

For our mains, we just had to get meaty! The Homemade Craft Sausages with Endless Bacon were outstanding, served with the creamiest of creamy mash and a crisp salad.

We also went for the Pacific Dory Fillet, served with tomatoes, rice, Kaffir lime and mixed spices. Again, it was great, especially the melt-in-your-mouth fish.

You know, we really didn’t need dessert. But then I spotted the words Caramel Samosas and I realised just how simply Sladja and I had been eating these past weeks in self isolation.

The coconut-pineapple samosas were every bit as good as they look. As was the caramel sauce they came drenched in and the accompanying ricotta ice cream. As with all the dishes that evening, our verdict was a resounding ten out of ten!

A novel end to an amazing evening at Georges.

On an evening full of lovely little touches, at the end of the meal there was one last surprise. The Electric Daisy is a fascinating little plant that took Sebastien over three years to grow in Cambodia. Take a shot of rum, treat yourself to a nibble of the daisy and enjoy the electric tingles zooming around your mouth!

Feeling a little daring? Georges also has a dish featuring the daisy called Romazava. It’s a kind of stew made with beef, greens, tomatoes and onions. Damn, next time! 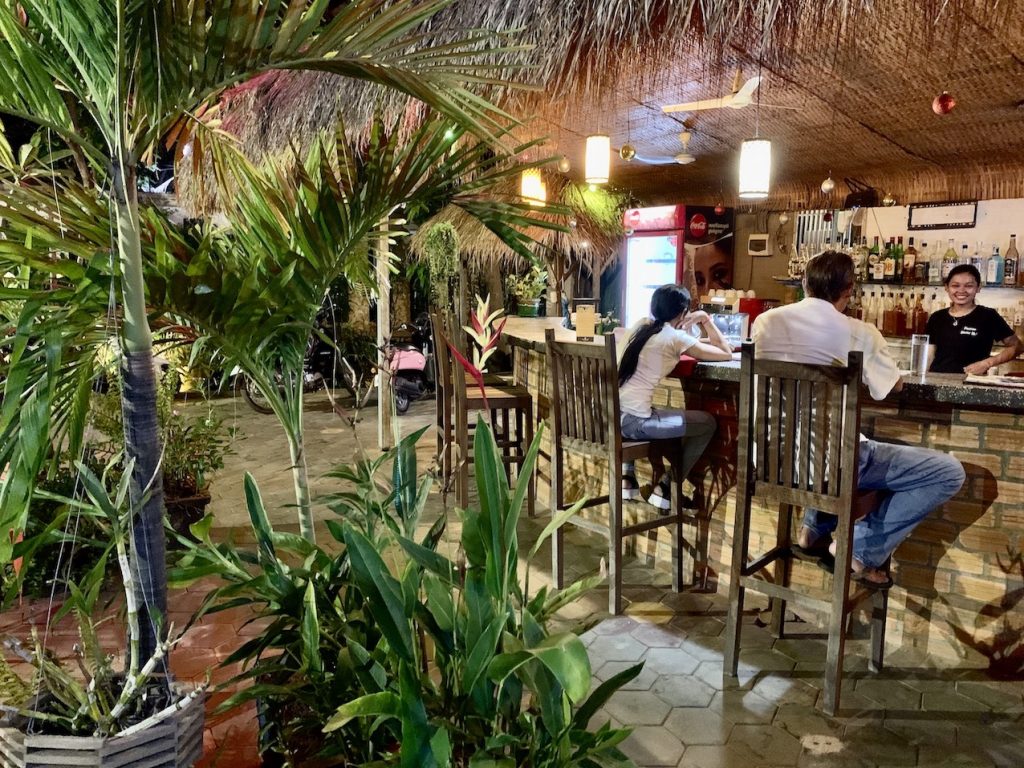 I cannot overstate what a brilliant evening we had at Georges. This is fine dining at a price that won’t break your wallet, served by some of the loveliest people we’ve met in Siem Reap! We will continue to support them in their battle for survival! Not convinced by the incredible food and the inventive rum? Then maybe just swing by and say hi to Cheese the cat!

Update: I am gutted to read, as of April 2021, that Georges had to close its doors due to the decimation of Siem Reap’s tourist industry. These guys are just another victim of the global pandemic. I’m so sorry, we will never forget our meals at your place. All the best in your future endeavours!