The Ivy Guesthouse and Restaurant.

As with so many cities across the world over the past month, it’s been sad to see what’s happened to the local business owners of Siem Reap.

Similarly, the cafe and restaurant scene has been decimated, with some of SR’s most loved institutions forced to shut up shop. One such legendary landmark is The Ivy, the city’s longest-running western-owned budget guesthouse.

To find out more about The Ivy’s touching story, Sladja and I came to see the place for ourselves. And of course to meet legendary co-owner, Som Sovannary. Selfless philanthropist, celebrated chef and devoted wife, among many other things, I had been looking forward to meeting her for some time.

Known simply as Vann to her friends, she kindly agreed to open the place up. Despite the fact that the premises are now closed due to the outbreak of COVID-19. 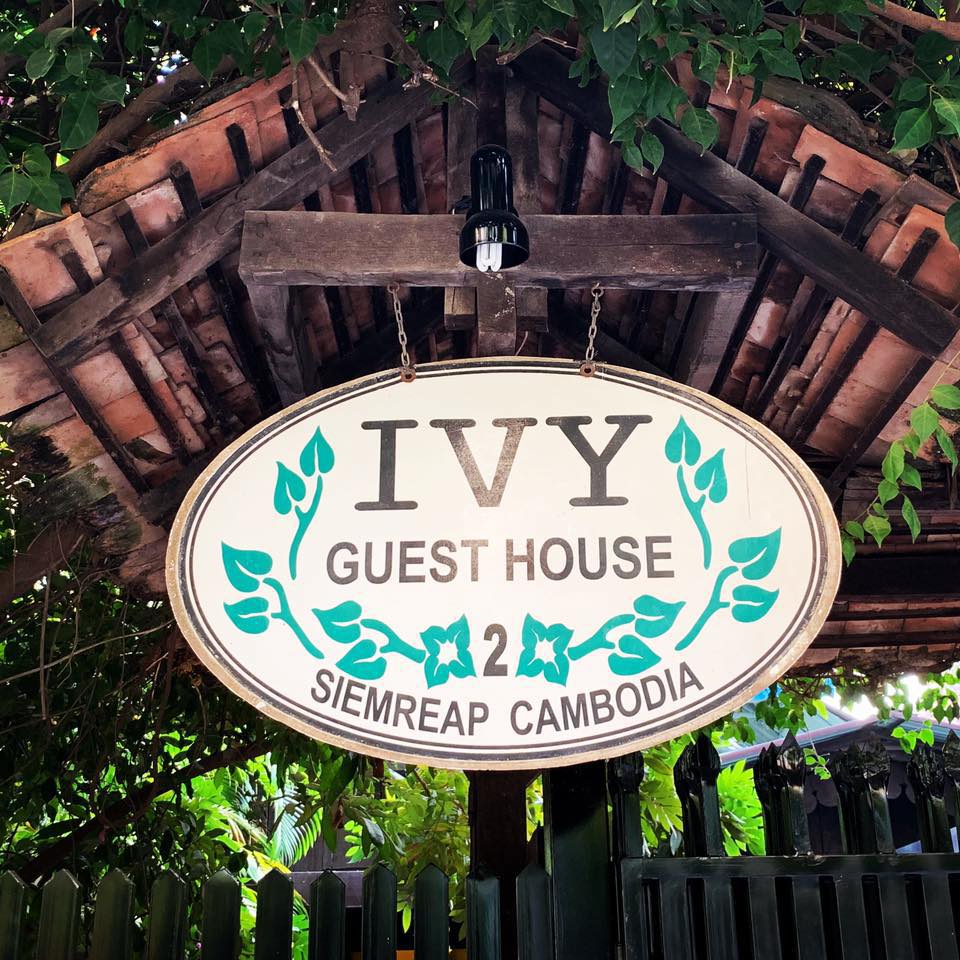 Welcome to The Ivy!

“So nice to meet you!” she blushed, as we entered The Ivy’s courtyard restaurant. In spite of the emptiness, it felt really homely with its open bar, wooden tables and flourishes of local art. Which made me feel sad all over again that there weren’t any other people here to enjoy it.

“This is still our home” says Vann, masking her worries from us with a wide smile that lights up the room. “We try to keep it clean and ready to reopen”. 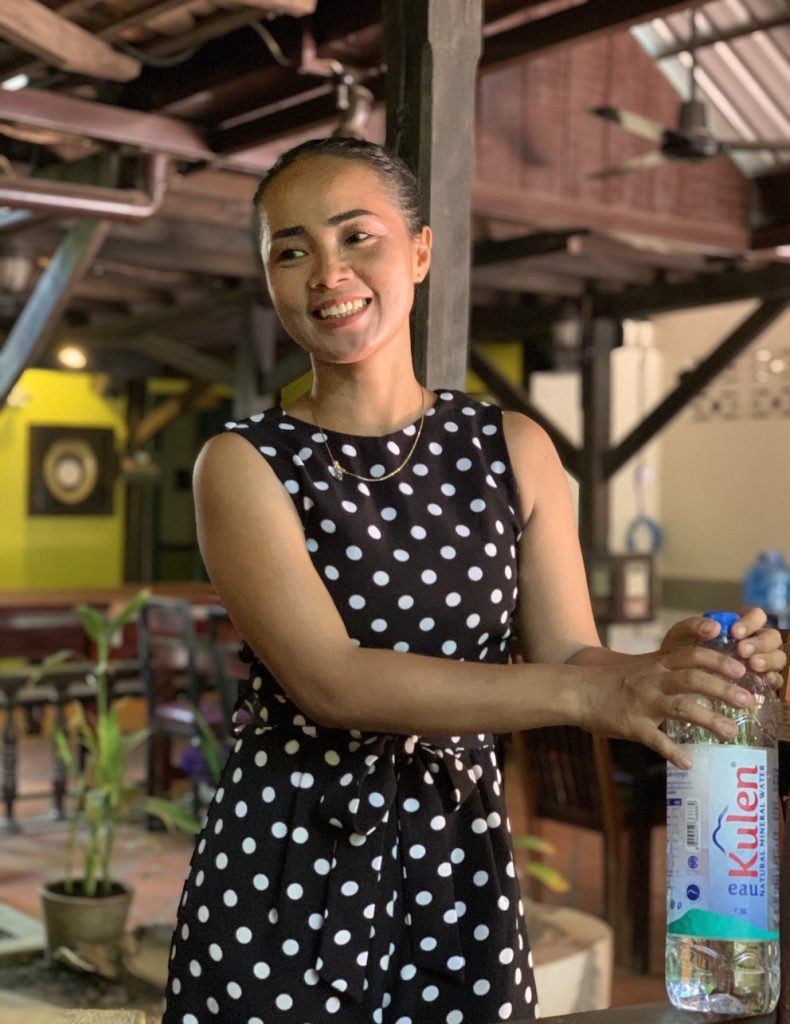 The story of The Ivy dates back to 1999 when it opened under the ownership of an Englishman, Karl Balch. At that time, The Ivy was the city’s only bar and restaurant that catered to the needs of local expats and visiting tourists. “The Original Ivy” as Vann calls it, was located down by the river and she joined on day one working behind the bar.

“It was relatively stress free in those early days. Siem Reap was a small town and we didn’t have much competition”.

Vann (second from left) behind the bar at the original Ivy. Photo courtesy of Som Sovannary.

Before long, Vannary and Karl grew close and eventually married in October 2001. Together, they built up The Ivy as Siem Reap’s premier home from home for hungry, tired visitors.

At the foundation of their business stood a mutual passion to provide delicious, home-cooked Khmer and western food in a friendly, welcoming environment. Multi-talented, by this time Vann was now head chef and her dishes quickly became the talk of the town. 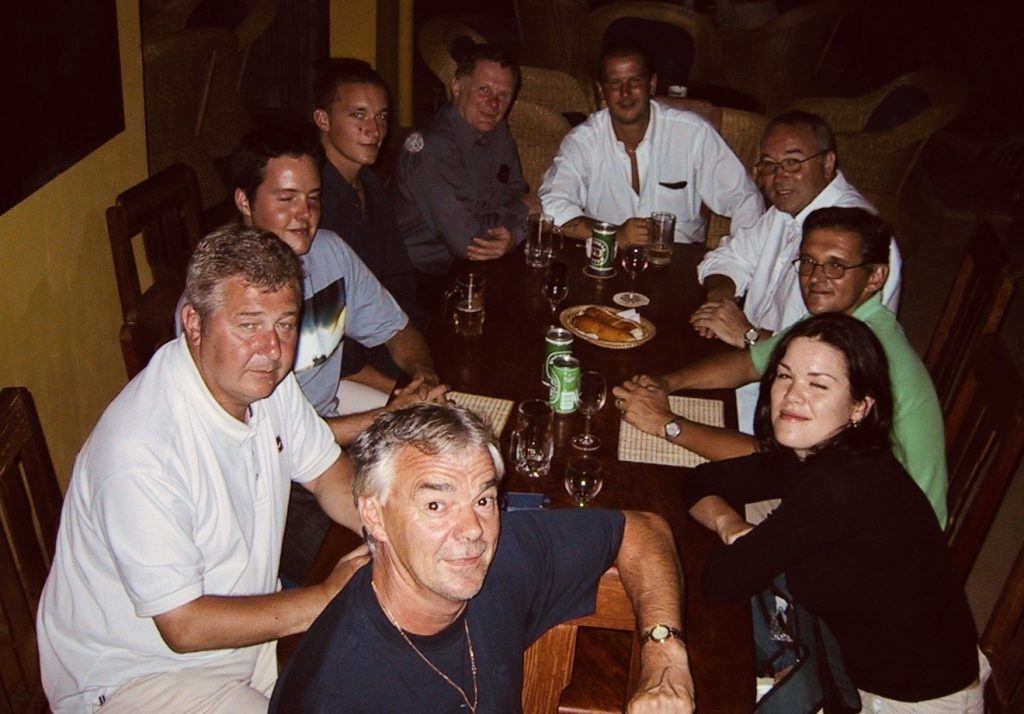 “The Ivy all day breakfast was a favourite lunch time cure for the excesses of the night before” – Kathryn Prince.

During this period, The Ivy became a choice dinner spot for the construction crew of Tomb Raider. This certainly helped Vann and Karl with their growing reputation!

Moreover, it signalled the beginning of a beautiful new friendship. Because it was here that Vann met Kathryn Prince, a film industry sculptor working on the Tomb Raider team. 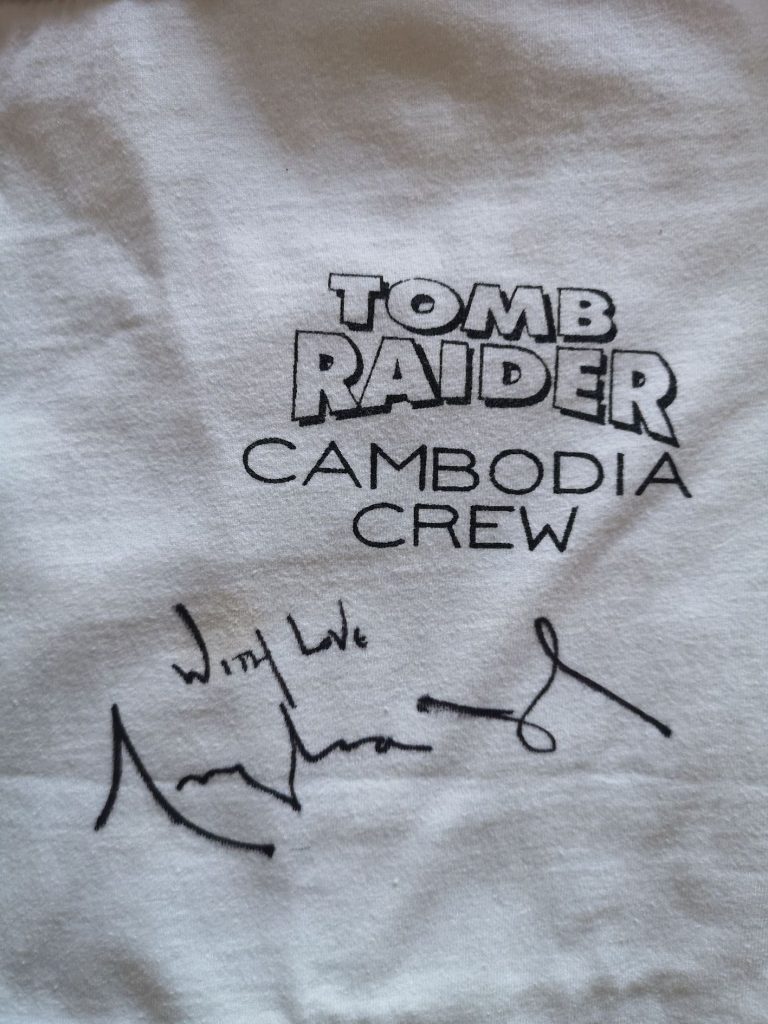 Like so many people who come to Cambodia, Kathryn fell in love with Siem Reap and the temples of Angkor. Furthermore, she adored The Ivy and formed a close bond with its inspirational owners. As a result, she often came back to Siem Reap to catch up with her friends and witness first hand the city’s blossoming standing as a tourist destination. 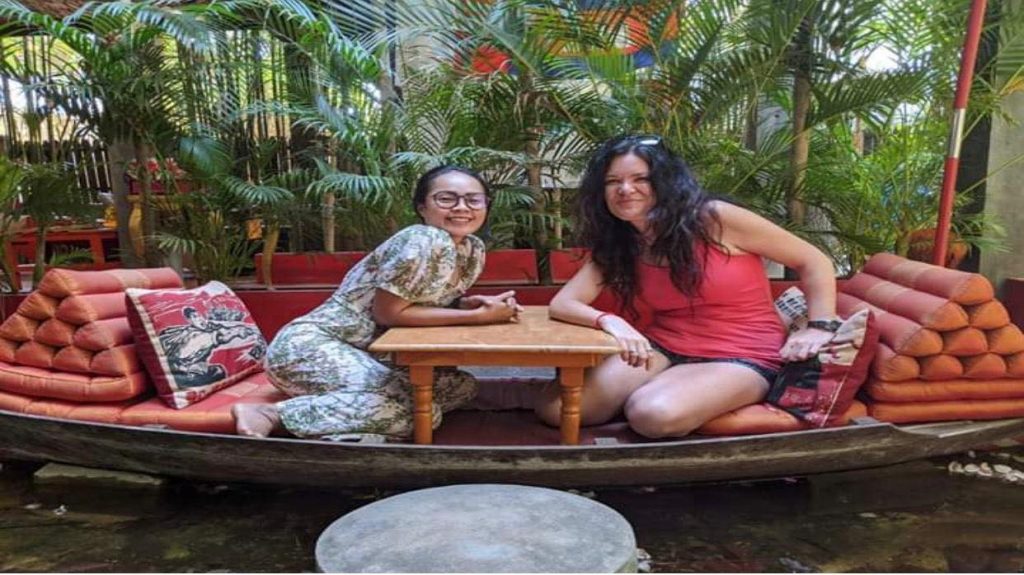 By 2011 The Ivy had become a famed Siem Reap institution. How cruel then, that in October of that year Karl died suddenly of a heart attack aged just 47. His passing caused shockwaves across Siem Reap and of course left Vann utterly heartbroken.

“He was my hero. He taught me so much, without him I would never be where I am now”.

“The heart of The Ivy was always Karl and Vann has stayed true to him, stepping up in tragic circumstances” – Kathryn Prince.

Today, there are traces of Karl lovingly placed around The Ivy. On the back wall of the courtyard, for example, Sladja and I found a framed 2008 article about Karl by The Phonom Penh Post. The story describes Balch as “a knockabout drifter” who built up a business, fell in love and became a “repository of Siem Reap tales”.

A man with an adventurous spirit, it also mentions how he unearthed Pol Pot’s toilet seat from the wreckage of the former leader’s country home. He had been demining at the time and only claimed it upon a friend’s insistence. And yes, the toilet seat is also here in The Ivy, right next to the framed article!

“The seat of power for many years!”

There’s no doubting that Vann has been through more than her fair share of hardships. The latest challenge, COVID-19, has threatened to derail her business altogether. And yet she remains as dedicated as ever.

Today, Vann owns and manages The Ivy in partnership with Kathryn. Together, they remain committed to keeping the business going and staying true to everything it stands for.

Although closed as a venue, Vann is battling on with a delivery service of her classic dishes. We came to try two of them, and to get a glimpse of how she weaves her magic in the kitchen.

It almost goes without saying that Vann’s food is absolutely fantastic! We settled down at a corner table in The Ivy’s courtyard restaurant that afternoon. A short while later, Vann switched from chef to waitress, serving me a plate of Grilled Pork Chop with mashed potato and creamy mushroom sauce. 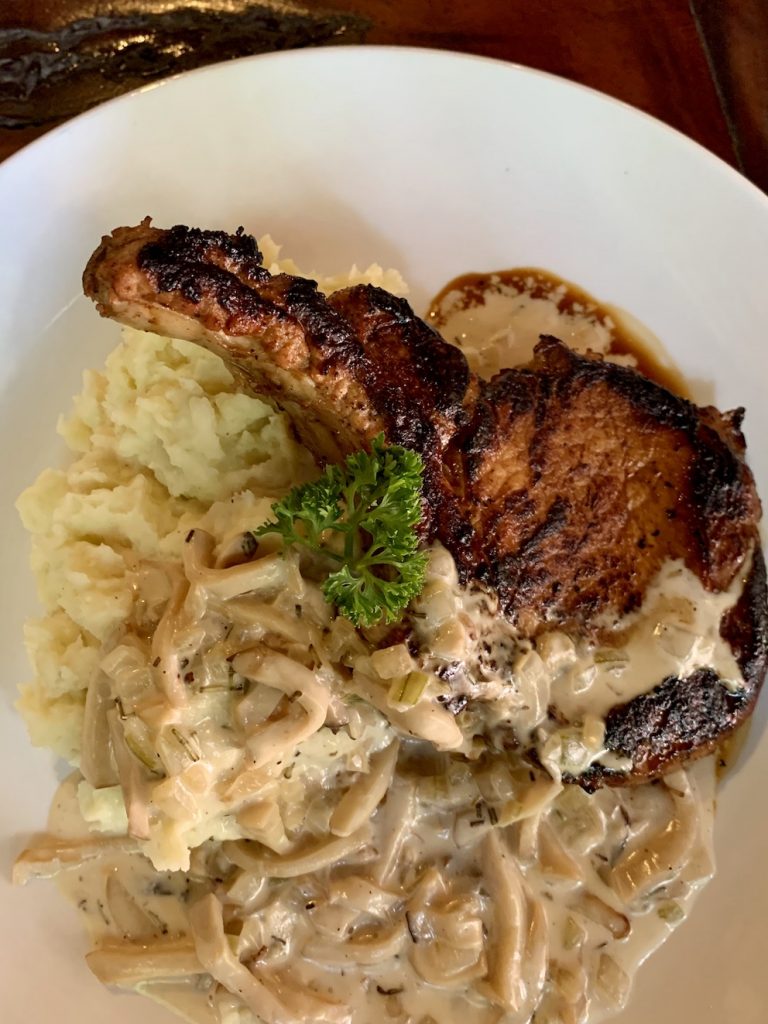 Sladja went for the Grilled Duck Breast, with garlic, mushrooms and sailor’s potatoes served in a sweet onion balsamic sauce. This, Vann told us, is a dish she’s particularly proud of and a recent addition to the Ivy menu. 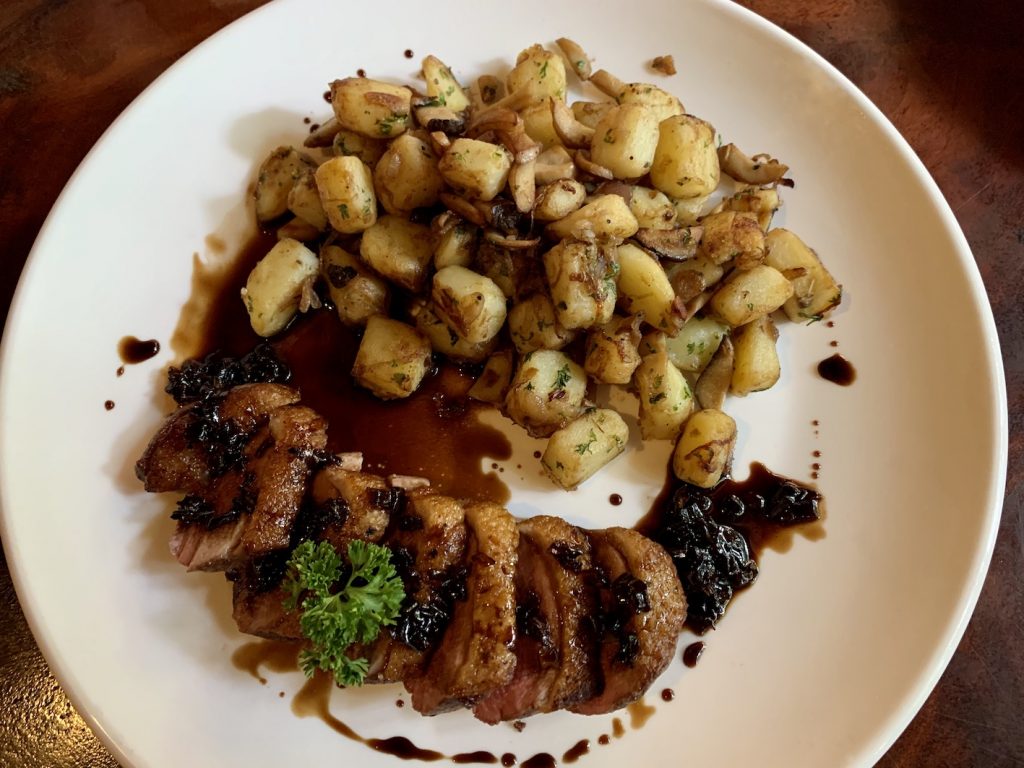 Both of these dishes, and more, are available now for delivery across Siem Reap. For cooking enthusiasts, I’d also highly recommend her beautifully illustrated cookbook, Vann’s Shared Secrets.

It was published through Cream Design in 2015 in collaboration with the artist Lisa-Marie Gibbs. Anyone interested in picking up a copy should contact Vann directly.

A brilliant and beautiful cookbook by Som Sovannary.

Profits from book sales go to The Lake Clinic, an amazing NGO dedicated to bringing basic healthcare, disease surveillance and proper medical referrals to the communities of Tonle Sap, a severely isolated and underserved region of Cambodia.

This is just another reason why Som Sovannary holds such a special place in the hearts and minds of Siem Reapers. And why The Ivy deserves every success now and in the future.