When I started my Siem Reap cafes and restaurants series last month, I had not an inkling of the amazing stories that lay in wait. What had begun as a series of standard reviews, soon turned into a deeper, more personalised look at the lives of Siem Reap’s business owners and how the virus has devastated people’s livelihoods.

Sladja and I feel privileged to have met so many genuinely lovely people this last month. And of course for the opportunity to tell their stories. In this regard, the tale of Tevy’s Place more than holds its own, thanks to the inspirational life of its Khmer owner. 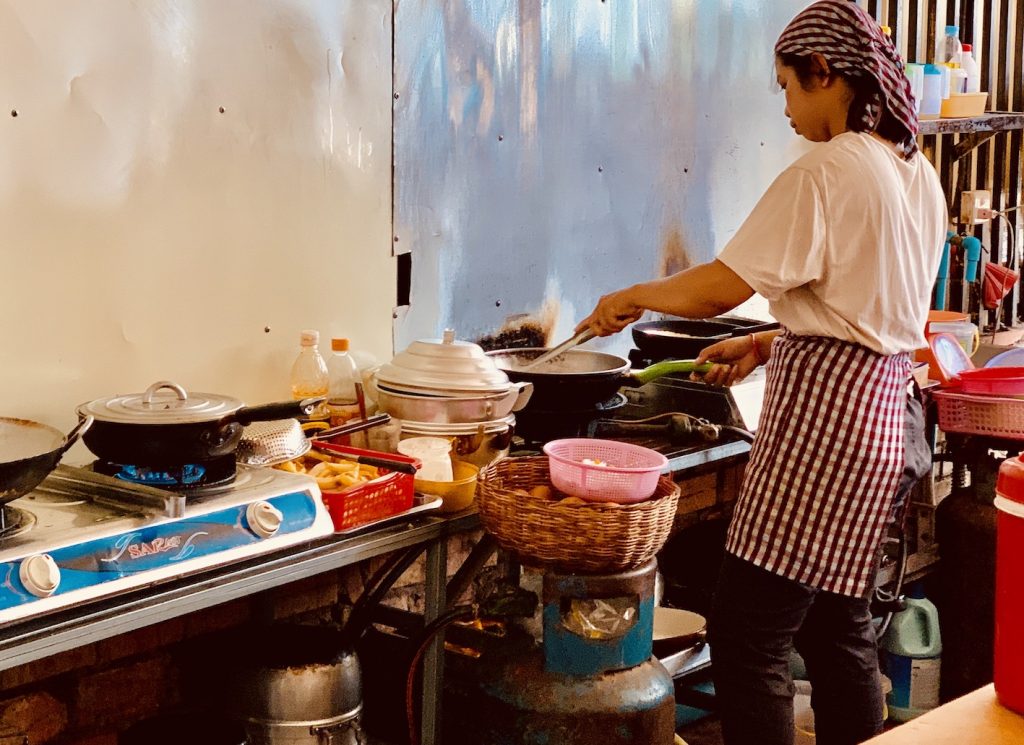 Occupying a modest little spot on Street 26, just across the road from Paris Bakery, I realise I must have driven past Tevy’s Place a hundred times without ever noticing it.

Now, as I stroll inside one boiling hot May afternoon, I can see why it had so easily escaped my attention. Tevy’s Place is a humble eatery with simple decor, an open kitchen and rock bottom prices. How cheap? I’m talking dishes that start as low as one dollar.

Consequently, it’s not difficult to see why Tevy’s Place is so popular with tourists and locals alike. Dirt cheap and delicious? What’s not to like? But the thing that really makes this tiny restaurant so special is Tevy herself, an incredible Khmer woman born in Cambodia’s capital, Phnom Penh. Carrying a bulging basket of fresh vegetables, she greeted us personally that day with a warm smile that betrays not a hint of the hardships she has faced during her fifty plus years.

Growing up in Phnom Penh, her mother was a housewife, her father a government teacher who was generally “good fun” and used to take her fishing. There wasn’t much money she says, and certainly nothing as frivolous as toys in the house. And yet, these early years were pretty comfortable compared to the trials and tribulations that lay ahead.

“My childhood ended at the age of 8”. 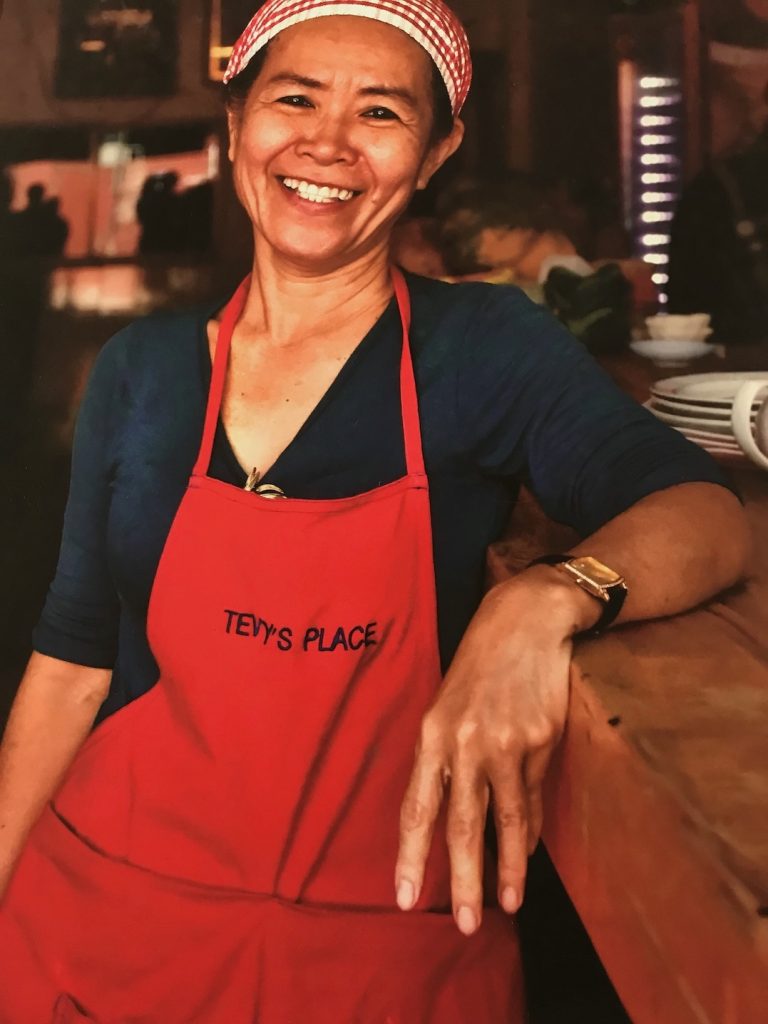 Aged just eight years old, Tevy remembers soldiers ordering them out of their home and into the countryside. Everyone was put to work, a situation that saw the family split up. Eventually, she learned that her father had fallen ill and taken to a so-called hospital. He never returned.

During this period, Tevy remembers working in rice fields, before learning that her three sisters had also passed away. The worst thing about it all, she admits, is that she still has no idea where any of her loved ones were buried. However, she is also keen to point out that many Cambodian families at the time went through the same thing. Hence she considers herself “nothing special”. 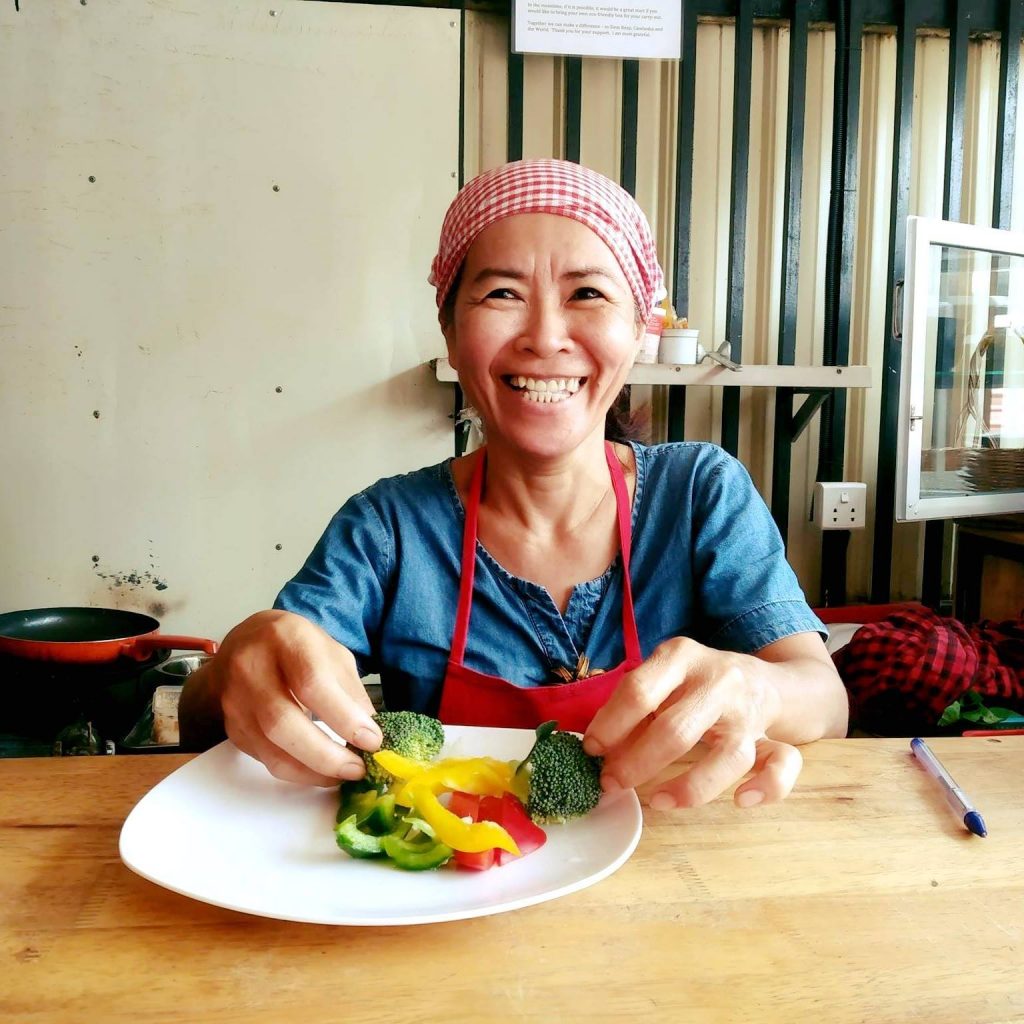 In the aftermath of the Khmer Rouge era, Tevy lived a busy life of varied experiences. She went to Uzbekistan as part of a Russian government sponsored engineering program. Later, she held down a job as an administrator.

But none of these experiences matched up to her love of cooking. Like many Cambodians, she’d learned her first dishes at her mother’s knee. Over the years, Tevy got better and better, developing new skills and nurturing her own ideas. Finally, she decided to strike out alone, opening her own restaurant in Phnom Penh.

“I was shocked, distressed and lost! I had nowhere to go”.

At long last Tevy’s situation had stabilised. But then, quite suddenly, she got evicted from her restaurant premises in The National Teacher Training Institute. They wanted to build a library, thus it was game over for the business she’d worked so hard to build up.

Homeless and penniless, she found herself living on the street, along with her mother and son. “We had nothing” she says, admitting it was a period of her life that is “too raw and difficult to talk about”. 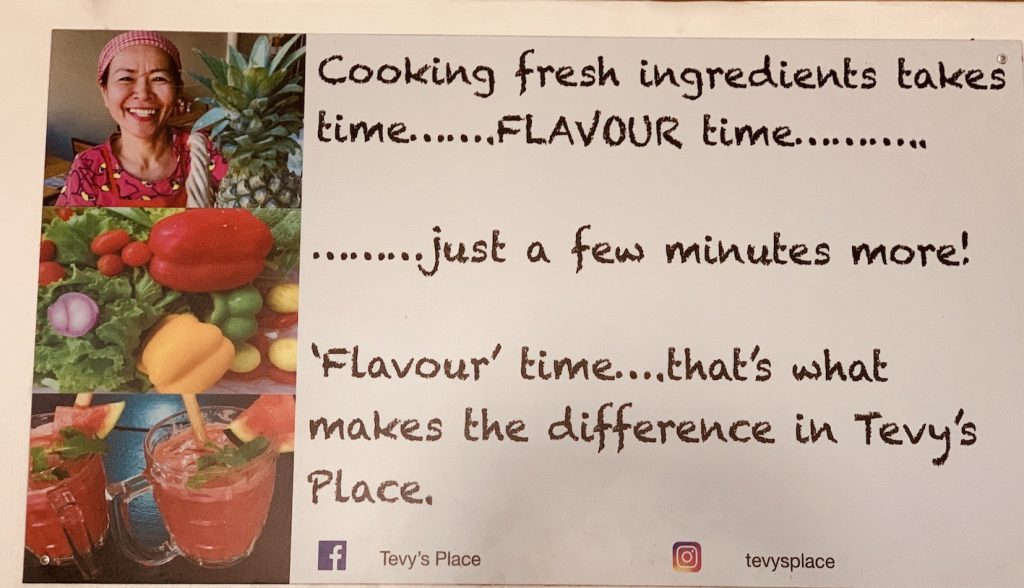 Disillusioned with her circumstances in the capital, Tevy moved to Siem Reap for a fresh start. It was here that she met up with Cecil, an Irishman who’d been a customer of hers back in Phnom Penh. Cecil showed great kindness to Tevy, firstly by helping her find a space to sell vegetables in the city’s Old Market.

In time, this morphed into her own street restaurant. With Cecil as her mentor, Tevy’s business blossomed, despite a whole host of ups and downs along the way. And then, one day, Tevy and Cecil spied a space for rent on Street 26 and they decided to snap the place up. Within two weeks, she had Tevy’s Place ready to rumble!

A pair of Tevy’s signature shakes.

That afternoon at Tevy’s Place, we wanted to kick off our feast with a pair of her famous fruit and veg shakes. Having scanned the options, it seemed only right that Sladja go for Tevy’s Green Goddess, a mix of avocado, broccoli, cauliflower, lettuce, banana, pineapple and lime. Similarly, I felt moved to order Cecil’s Irish Green, a combination of kale, spinach, celery, pineapple, green apple and ginger. Dee-lish.

As a starter, we shared a wonderfully fresh Avocado Salad, served with a tangy vinaigrette and white pepper. Whenever possible, Tevy uses organically sourced ingredients and has, over the years, developed strong partnerships across the Siem Reap community.

She supports local farmers in nearby Chreav Village. Tevy also teams up with a vegetable garden connected to Anjali House, who work with disadvantaged young people. Moreover, she has trusted suppliers at Phsar Leu Market and buys from Happy + Co Farm. Keen to rid the streets of plastic and rubbish, Tevy’s Place has also joined forces with several local organisations to take part in clean ups.

Where to Eat and Drink, Siem Reap.

Next up, a plate of of rich, soupy Ginger Beef and vegetables. Hot on its heels, came one of the creamiest bowls of pumpkin soup I’ve ever tasted. No messin’.

After all that, we hardly needed an extra dish, but we ordered one anyway. This time, a tray of Fried Chicken with Steamed Rice, Salad & Sweet Chilli Sauce. Considering the quality of the dishes, I found myself revisiting the subject of Tevy’s low prices. Why exactly does she leave herself with such slim profit margins?

“My life has been one of scarcity, every penny counts!”

“My background and general view of life impacts not only on who I am, but what I do”, explains Tevy. She says her low prices and modest profits have inspired loyalty from her customers. Furthermore, she negotiates hard with her suppliers, strives to minimise waste and keeps her costs tightly under control. In the end, she believes everyone benefits.

“As a woman who was deserted by a husband, I see women in Cambodia who have hard lives, sometimes, treated badly by men. Women carry a big workload in families”. 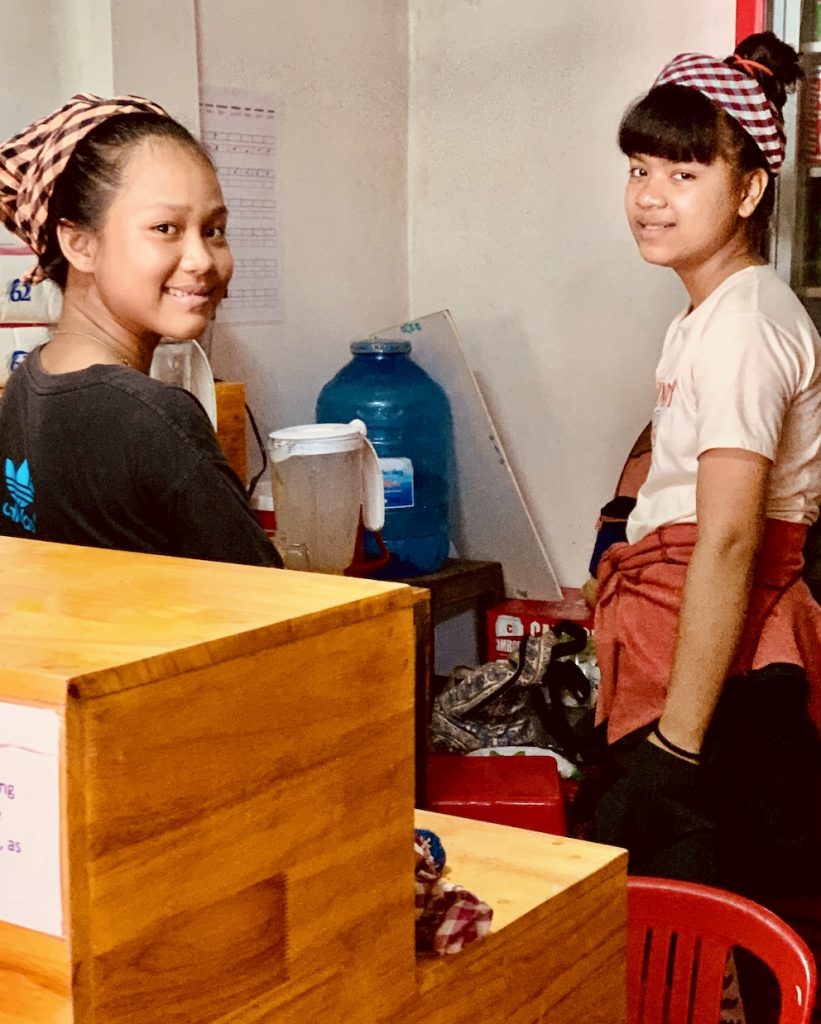 Perhaps most admirable of all, Tevy is a passionate supporter of women. In fact, her all-female team of cooks and waitresses invariably come from troubled backgrounds. Just as Cecil helped her, Tevy wants to mentor those who have been through tough times and give them a chance to turn things around. Some of her staff were illiterate when they arrived, others physically abused.

A job at Tevy’s Place represents not only a stable salary, but the chance for self improvement. One success story is that of Pi Pi, whose job here now sustains her entire family. Best of all, the extended Tevy’s Place family have even helped her build her own home. It really is a humbling thought as you sit munching on your spring rolls. 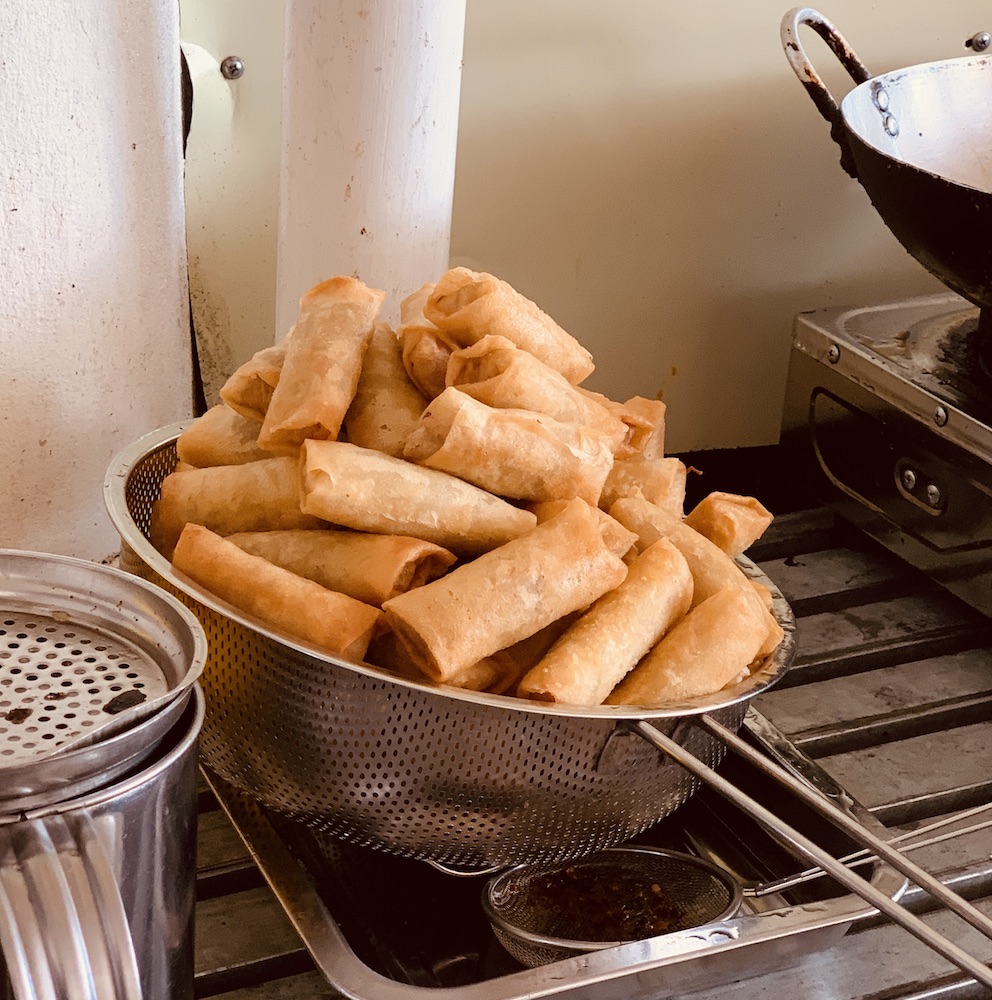 When COVID-19 decimated Siem Reap’s restaurant landscape in March, Tevy and her team decided to  fight on. In this new era of social distancing, she has been focusing on takeaways and deliveries.

Nevertheless, the restaurant itself remains open for a visit, and indeed we witnessed a few arrivals that afternoon. A French girl ordered a plate of fries, while an older gentleman tucked into a bowl of noodle soup. As we finished up our meal, two British guys came, asking for spring rolls. Everyone left happy.

All of Tevy’s plans for 2020, which included a new kitchen, an extended menu and even her own home, have now been put on hold. Not that you’ll find Tevy wallowing in self pity. This latest life challenge is peanuts compared to what she’s been through. Instead, she focuses on what needs to be done. And above all, that she continues to stay true to the principles that permeate her restaurant: Quality, Value and Service.

To get in touch with Tevy’s Place, head for her Facebook page.