Even in a city with a food and drink scene as diverse and competitive as Siem Reap, Wine O’ Clock has succeeded in carving out its own little niche. Sladja and I first came here back in January when we’d had a hankering for fresh sandwiches.

After a period gorging on Khmer, Indian, Mexican, Greek and just about everything else under the sun, we wanted to go back to basics. That evening, we’d have gladly settled for a simple cheese sandwich. Instead, we found ourselves tempted by a tantalising array of artisan fillings.

Finally, after much deliberation, I went for a multigrain baguette bursting at the seams with smoked chicken, fresh mango and avocado. Sladja, in her infinite wisdom, was similarly pleased with her French baguette and its seemingly painted layers of cheese and pepperoni. Adding to the amazing overall moisture, a liberal drowsing of “award-winning olive oil”. Sandwich hankering satisfied? You better believe it.

During our first few months in Siem Reap, we lived just down the road from Wine O’ Clock. Hence it quickly became “our sandwich place”. However, we knew this was doing their gigantic menu a gross disservice. Thus, one evening, we took a chance on one of their famous cheese and meat platters. All beautifully presented and, quality wise, the kinda thing you’d expect from a high end Paris deli bar.

In case you’re wondering what time Wine o’ Clock actually is, the answer is always. Because, ladies and gentlemen, they are open 24/7! A great option when… like us… you find yourself with an attack of the nibbles at two o’ clock in the morning in the middle of a Martin Scorsese marathon.

Wine O’ Clock is the brainwave of Ahmed, a Bahraini national who came to Siem Reap in 2014. With no intention whatsoever of “going back to an I.T. job anytime soon”, he treated his Cambodia adventure as a brand new start. In those early days, Ahmed helped manage a modest cafe-shop with his Khmer wife. Over time, their ideas and ambitions blossomed. Eventually, after months of hard work, they unveiled Wine O’ Clock in 2018.

These days Ahmed runs the place alongside a lumberjacky Luxembourger called Paul. He came to Siem Reap back in 2016 after “a coin flip between Mexico and Cambodia”. It’s a very long story, he warns. But one that he’s happy to divulge in person at Wine O’ Clock, should anyone want to hear it. With a background in hospitality and a passion for cooking, Paul was a shrewd addition to Ahmed’s team.

At its core, Wine O’ Clock offers “a bit of everything”, a cosy haven of “great food, fine wine and good company”. Yes, you can consider it a cafe, maybe even a restaurant. But according to Ahmed, it’s way more than those things.

Rather, he sees his cafe as a home from home for people to come and be themselves. UNLESS, that is, you happen to be a snob. In fact, his one rule is that people leave any pretensions at the door. You’ll even see this mantra trumpeted from their website in no uncertain terms!

It’s fitting then that Wine O’ Clock puts an emphasis on affordability. While they remain committed to offering fine wines from around the world, Ahmed admits their most expensive bottle sold was at a very reasonable $20. If anyone’s up for breaking that record, Paul says they do have a bottle of Rioja Gran Reserva by Cune, at a cool $89.

Regarding the food, Ahmed explains that in most cases he imports his meats from Europe. That said, some of his hams are made close by, have less preservatives and therefore a shelf life of just a few days. “And you can taste that” he winks, “because it’s the real deal”. Furthermore, being staffed twenty four hours allows the team to get hold of the freshest ingredients at a moment’s notice and also reduces any worries of their stuff spoiling.

Wine O’ Clock is one of the few cafes in Siem Reap that has stayed fully operational during the outbreak of COVID-19. “We obviously witnessed the great escape of a lot of people” muses Ahmed. “The last flights to Europe and all that, pretty sure they all regret it now, ha”.

As a result, the cafe has lost plenty of familiar faces. But it hasn’t been a total disaster. Those who decided to stay and self isolate have proved loyal to Ahmed and his team, while there’s also been a clear increase in deliveries. When all is said and done, he thinks it’s been “about the same as any typical low season”.

Moreover, he has managed to retain his team of nine local staff members. Even better, he was able to award salary increases for their loyalty and hard work. “They really deserve it”, insists Ahmed. “I could tell you about each and every one of them”.

“The guy who drives half an hour to work everyday and never comes late. The one that speaks 3 languages? Oh, and the dude who works night shift and parties all day!”

Ahmed and Paul chatting to a customer.

Still in Siem Reap? Why not swing by Wine O’ Clock. You could grab a fresh sandwich, taste some award-winning olive oil, or break their wine sale record. Failing that, there’s always the chance to find out why Paul never made it to Mexico.

For more on Wine O’ Clock, check out their website.

You can also get in touch with Ahmed and Paul through their Facebook page.

Update: As with a number of our favourite Siem Reap haunts, Wine O’ Clock finally fell victim to the effects of the global pandemic. Due to bans on group gatherings and alcohol consumption, they regrettably closed their doors in July 2021. 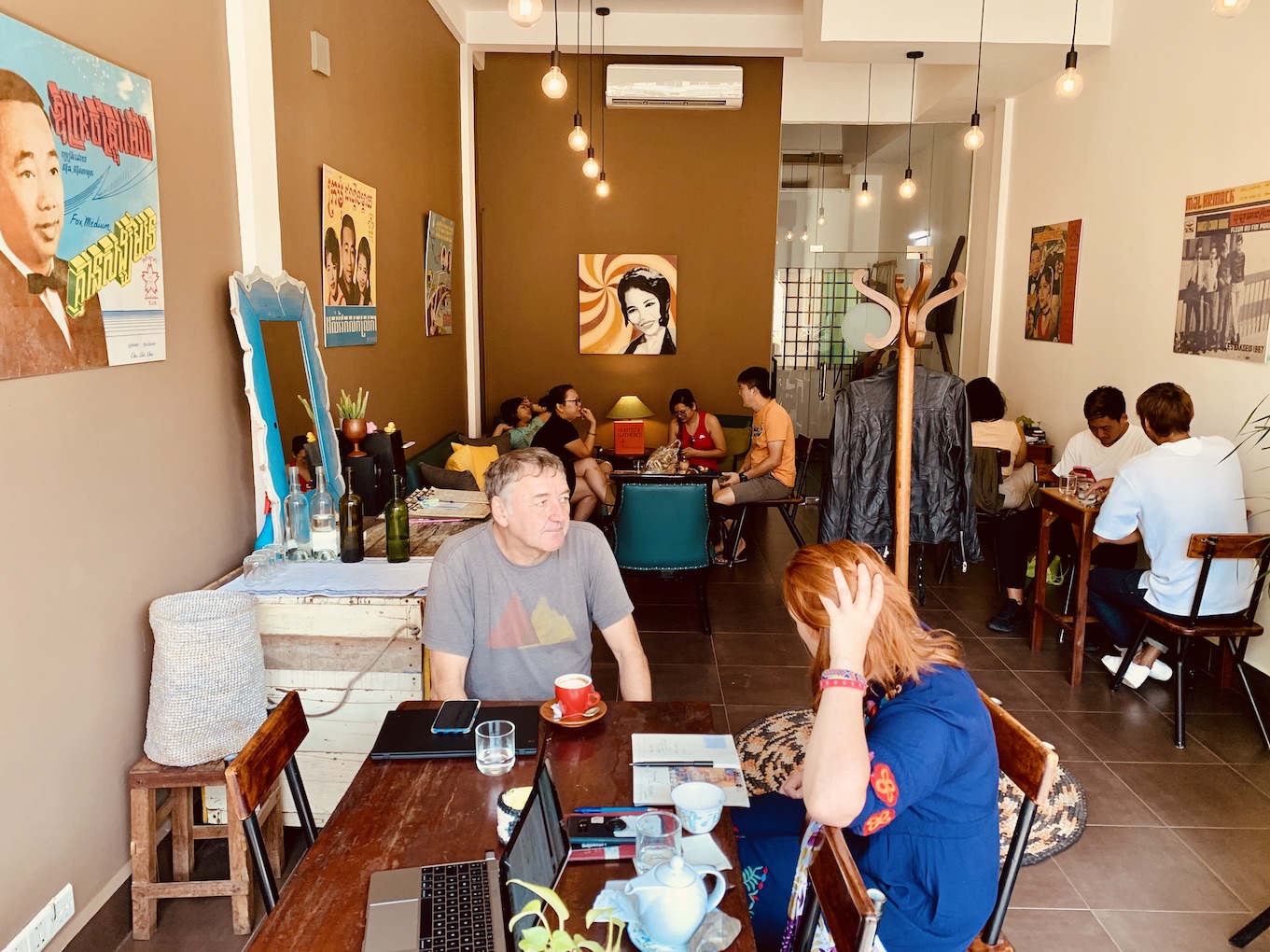