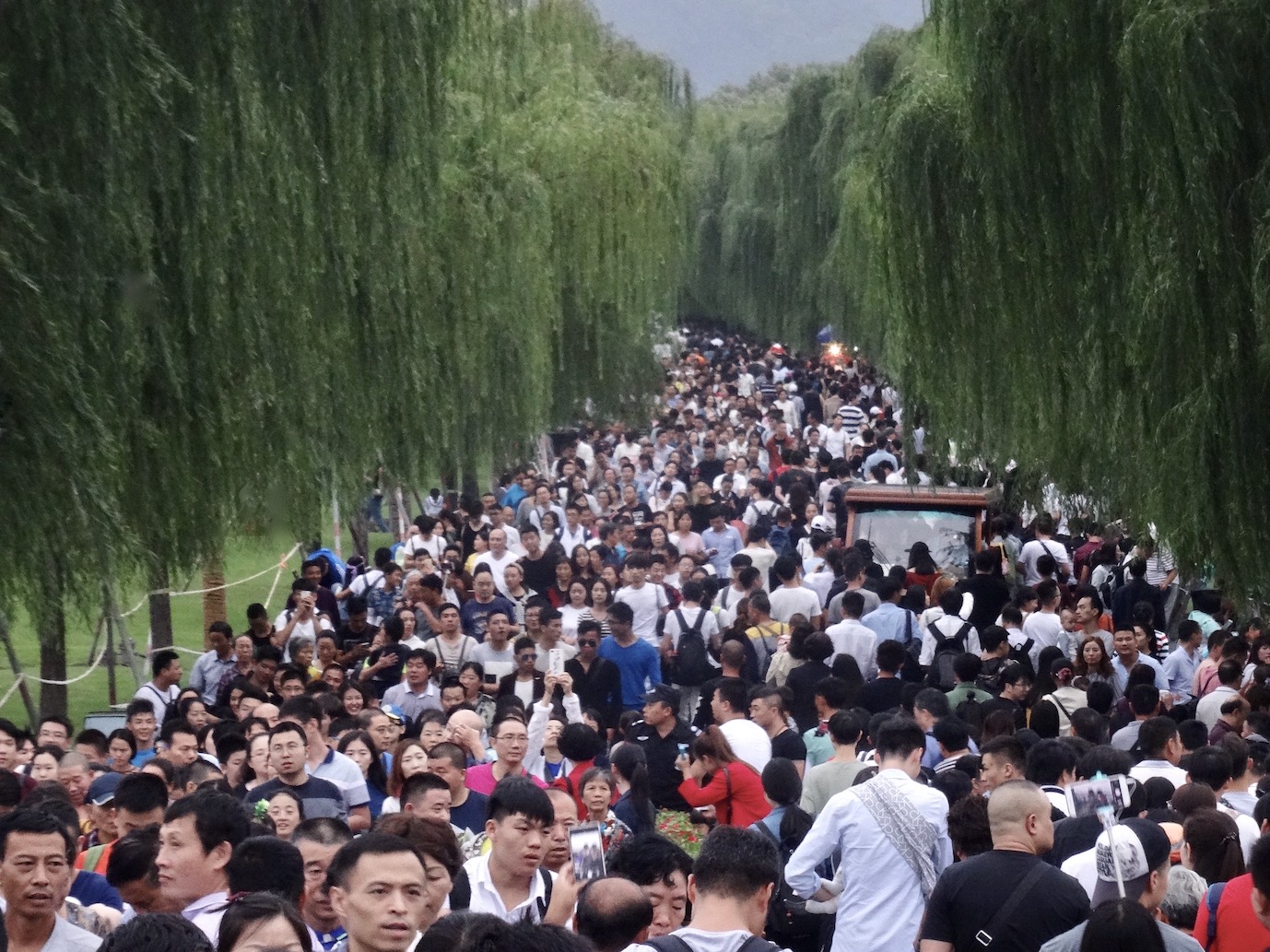 October 2017. Looking back, it was crazy of Wonderboy and I to tackle Hangzhou’s West Lake right in the eye of the storm that is China’s Golden Week holiday. But hey, we had five days off just like everyone else. Plus we really wanted to see if Hangzhou was as great as everybody had told us.

We were expecting the city to be busy of course. However, the actual scale of the crowds turned out to be a sight to behold. Of all the places we visited during our stay in Hangzhou, the craziest spot was Su Causeway. This beautifully designed walkway cuts right through the lake, connecting the two sides, and spans a whopping 2.6 kilometres. 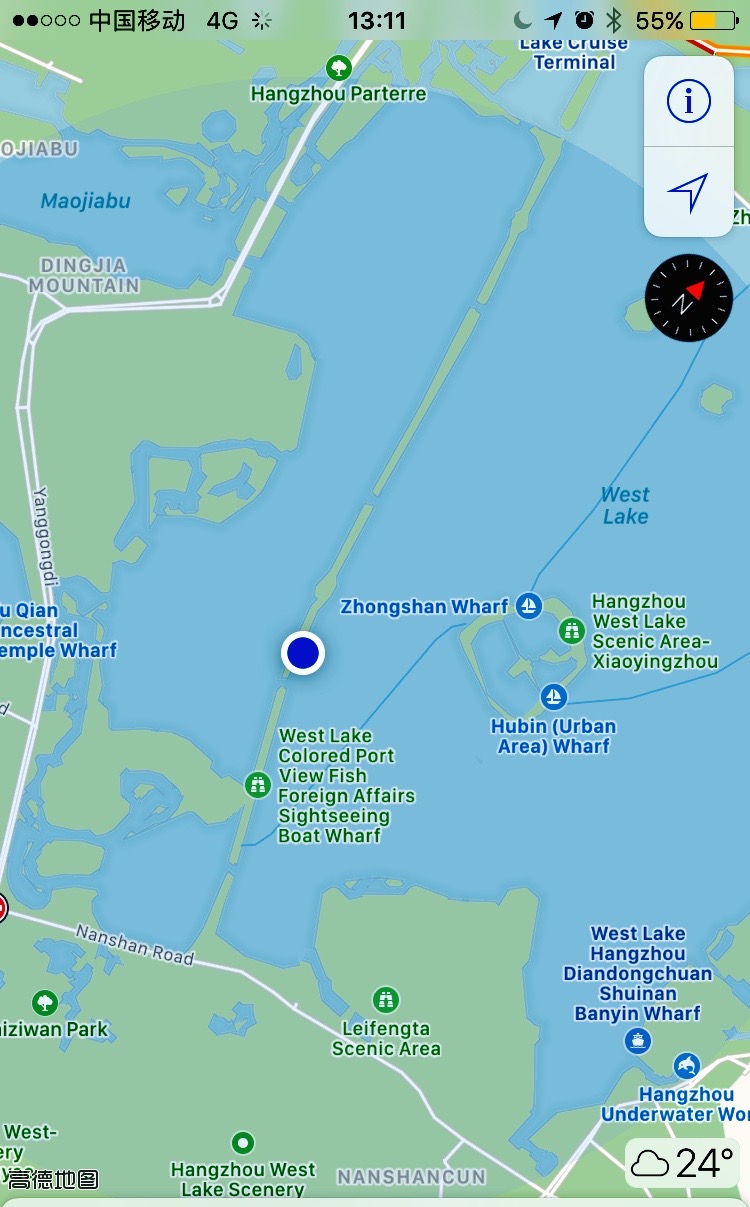 Constructed in 1086 by the famed Chinese poet and Hangzhou governor Su Shi, Su Causeway holds much historical and cultural significance. At a time of great poverty and drought in Hangzhou, Su ordered the dredging of the lake so that he could use the resulting mud to build the new causeway.

That afternoon, Wonderboy and I ducked into Su Causeway simply as it was quickest way to get to the other side of the lake. Unfortunately, several thousand people had exactly the same idea! Before we knew what was going on, we found ourselves swallowed up in a sea of marching bodies. 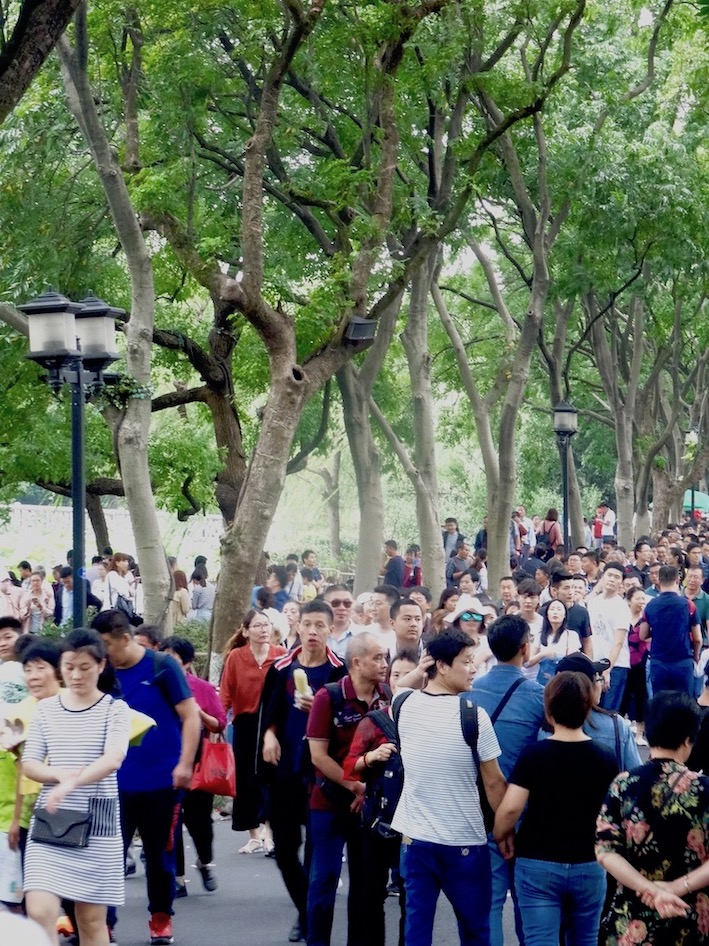 The further we pushed on, the more manageable the foot traffic became. Moreover, it’s also possible to branch off the main path into various peaceful garden stations down by the water’s edge. 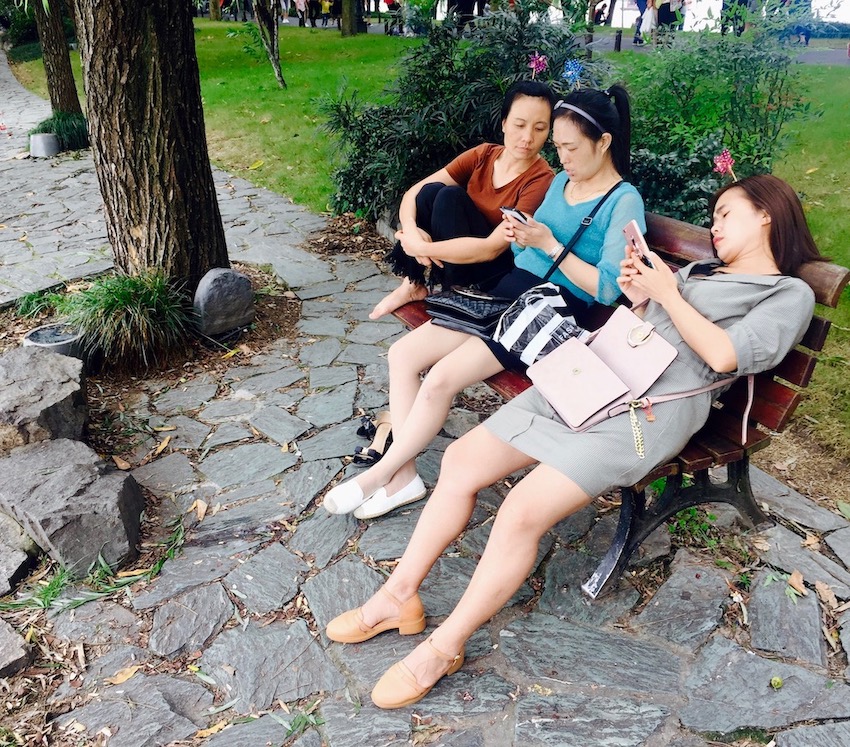 With willow trees, flowers, bushes, plants, rockeries and wooden benches to sit on, this certainly took some of the edge off our experience that day. For one woman apparently, the Su Causeway experience had almost been too much! 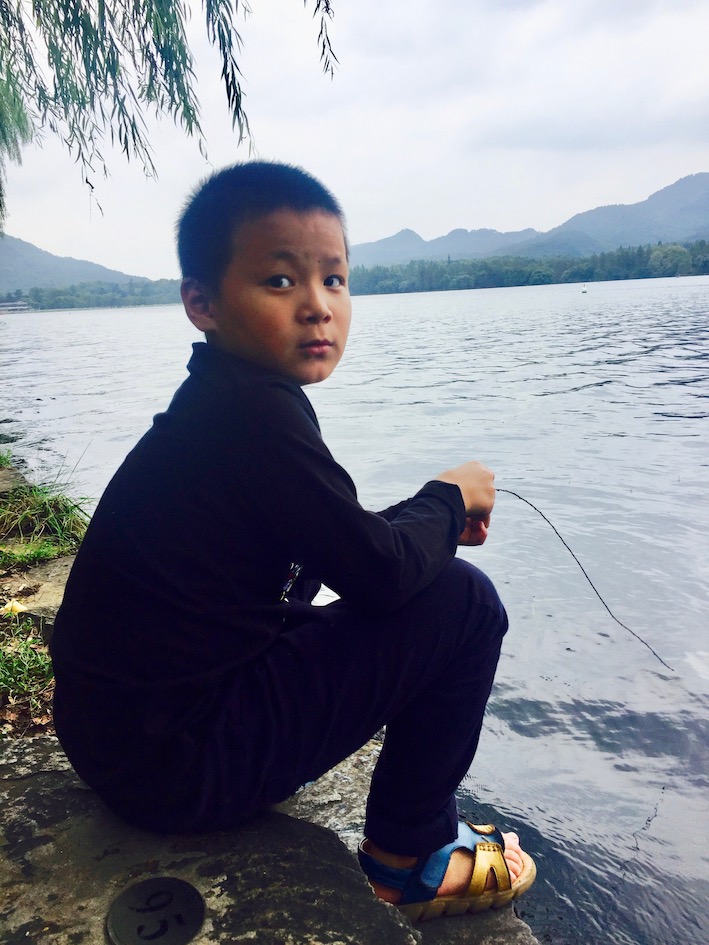 It was also here that I came upon this little guy. He had exactly the right idea! Back turned to the chaos… fiddling with a stick… gazing out across West Lake. 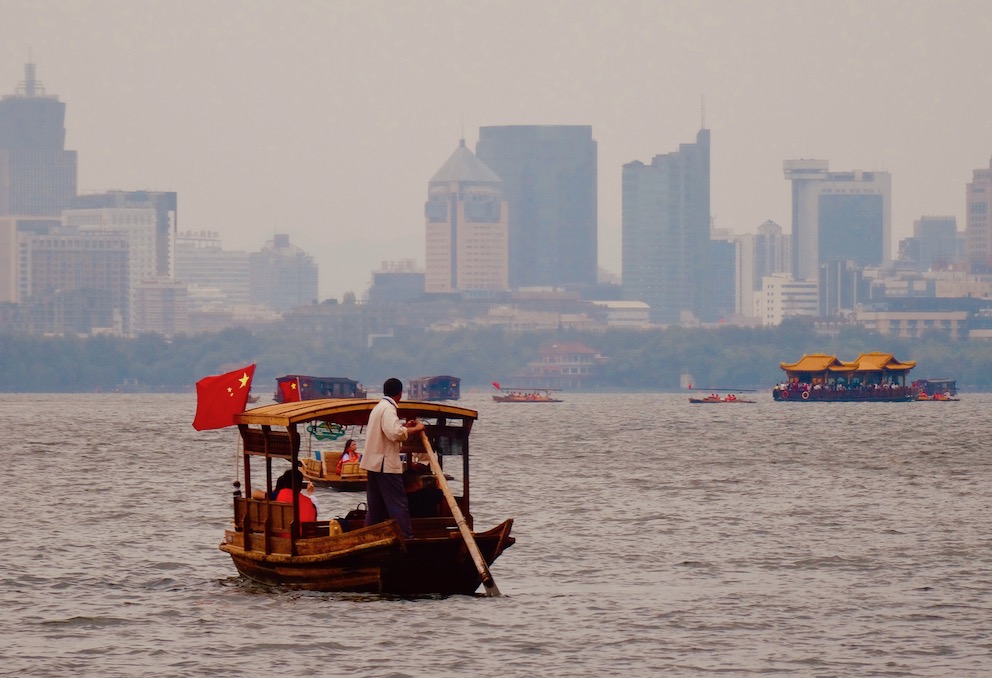 Another advantage of resting here was to simply sit and watch the boats go back and forth across West Lake. It was almost hypnotic and made me realise I could have happily spent the rest of the afternoon here rather than return to the chaos of Su Causeway’s main path. 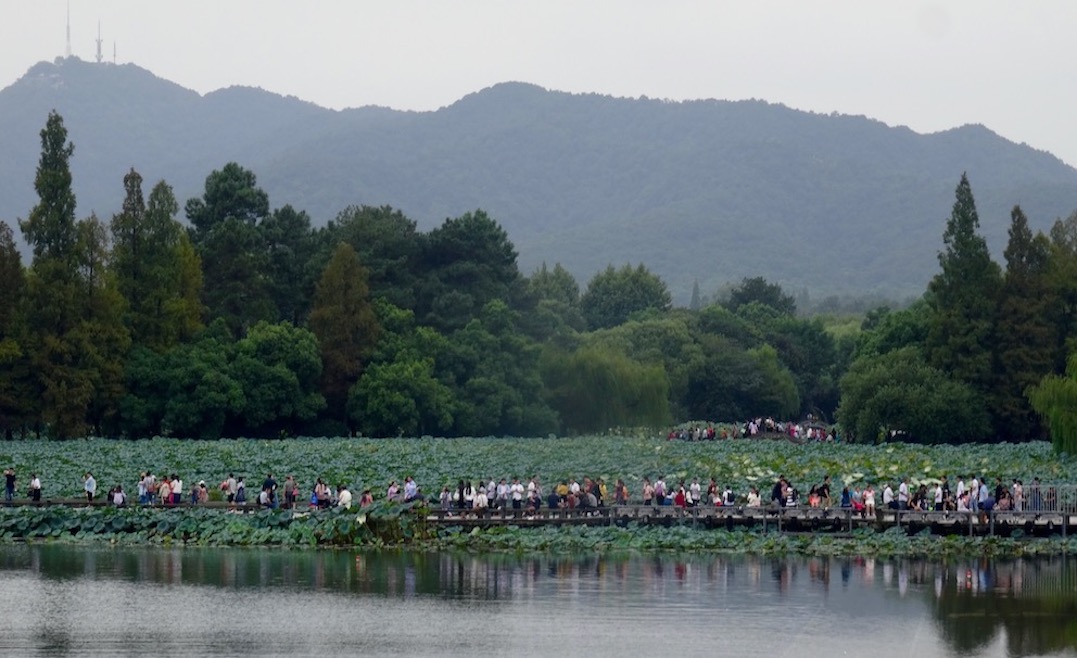 Eventually, we got back up and continued our way towards the causeway’s northern exit. Along the way, there were more great West Lake views. Including this stunning lily pad park, accessed via a long, narrow boardwalk. 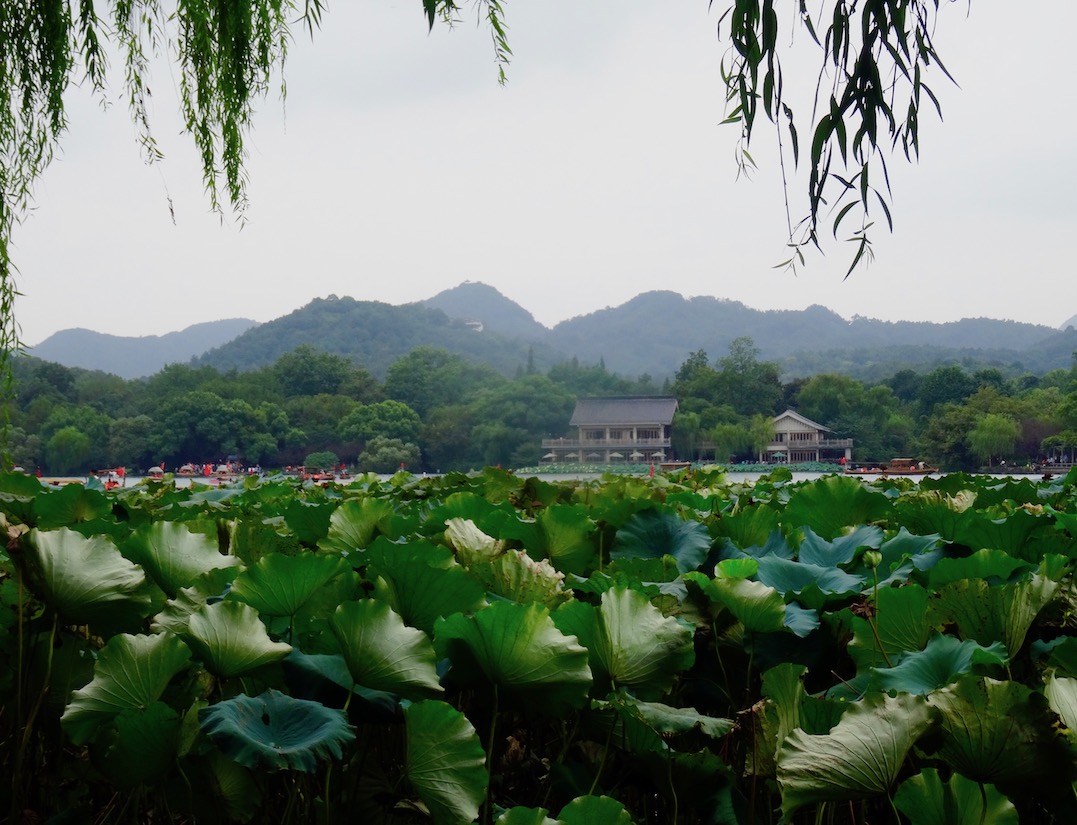 As mental as my experience was negotiating Su Causeway, I’ve actually had an even more intense afternoon with Chinese crowds. To see some next level Golden Week chaos, check out my articles from Nanjing Massacre Memorial.

For more on my time in the city, have a read of my other articles on Hangzhou.