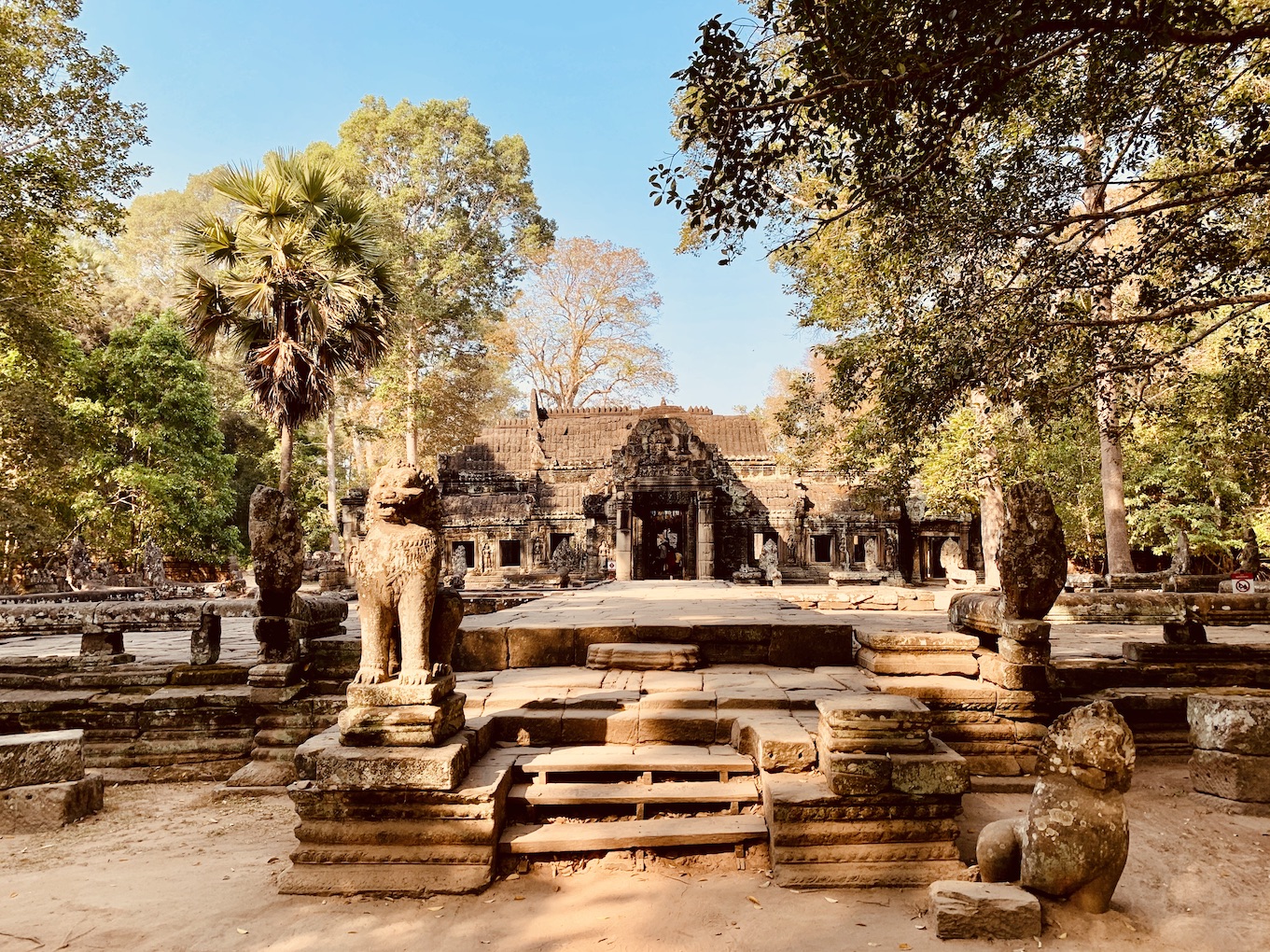 Back in our previous lives, long before Sladja and I knew each other, we both spent a day touring The Temples of Angkor. My visit came in November 2015, hers shortly after in January 2016. Like so many first timers in Cambodia, we didn’t venture further than the so-called big three: Angkor Wat, Bayon Temple and Ta Prohm Temple. 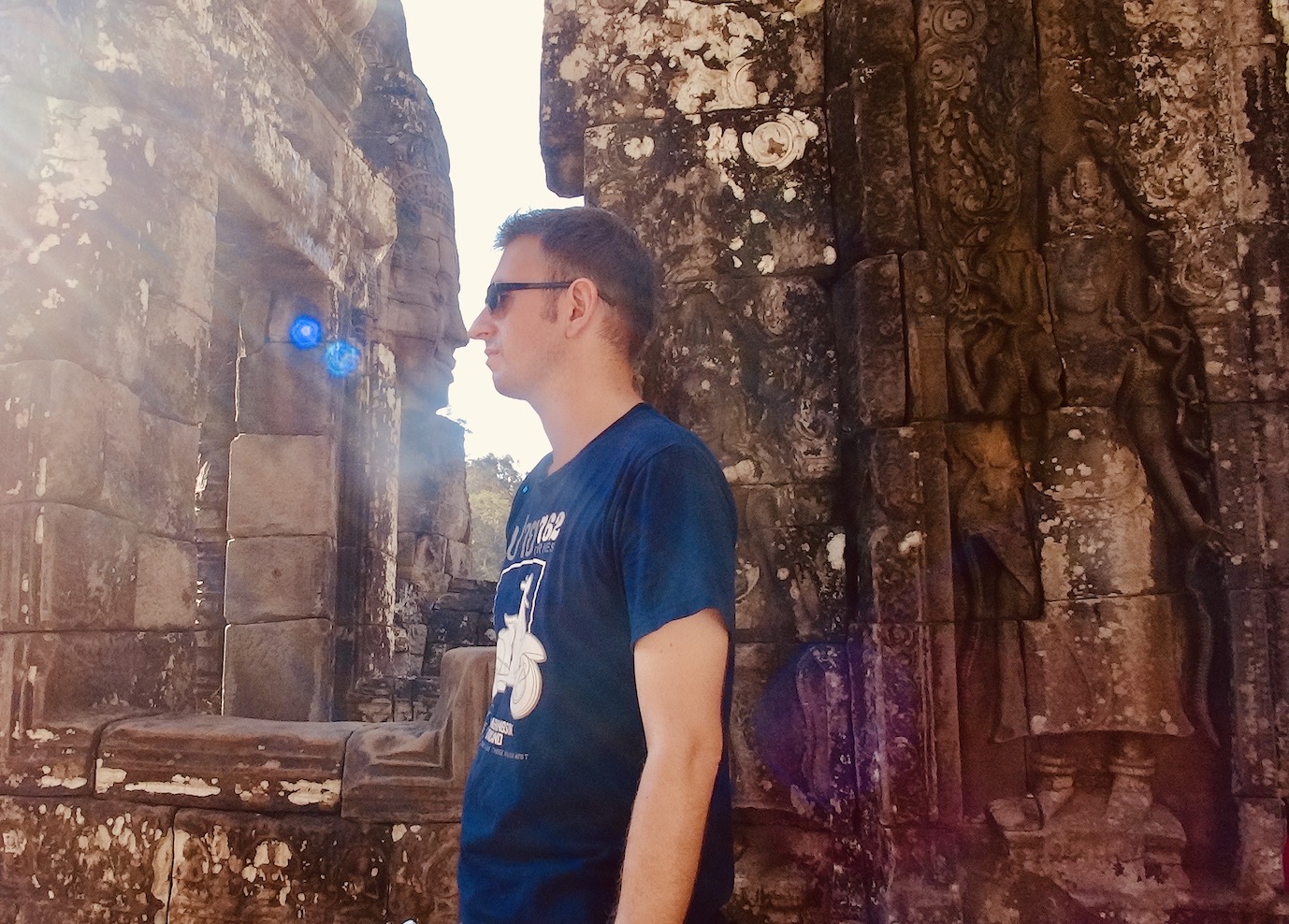 Neither of us expected to ever return to Siem Reap. However, when fate threw us back to The Kingdom of Wonder, I knew we had to delve deeper into one of the world’s most fascinating collection of ancient temples. 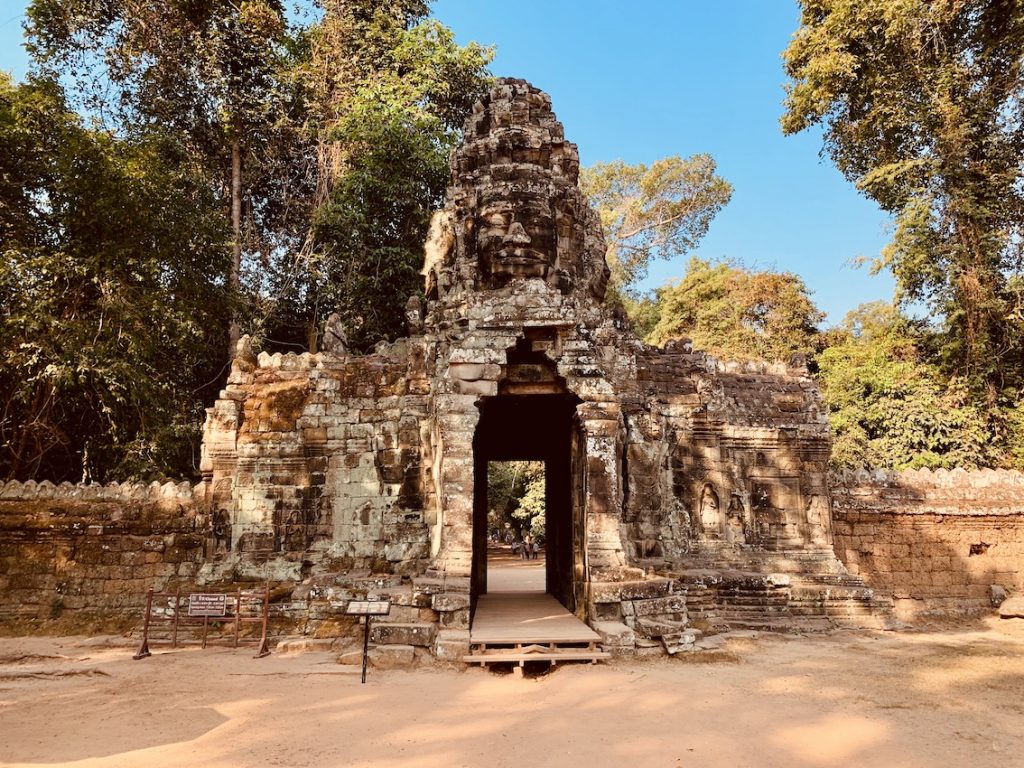 The entrance to Banteay Kdei Temple.

Hiring a tuk tuk driver for the day, we began our explorations at Banteay Kdei Temple. We’d been attracted by several online reviews describing “a hidden gem” that is “mostly ignored by overseas visitors”.

On both counts, this sounded right up our street. Pleasingly, these descriptions turned out to be right on the button. In fact, there were barely a handful of visitors in sight as we made the long, dusty approach to the ruins. 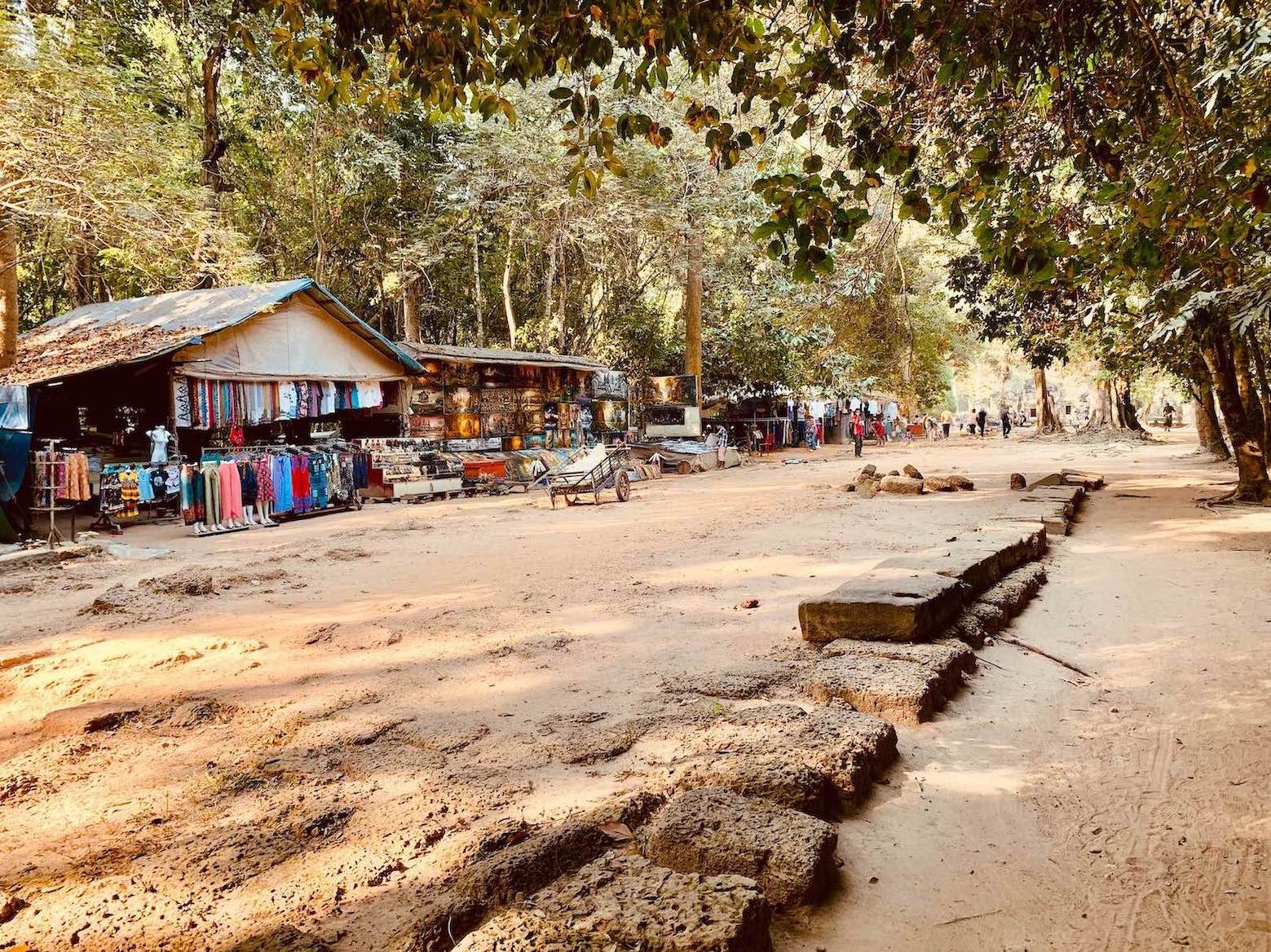 The approach to Banteay Kdei Temple.

As with many Angkor temples, the path was lined with vendors selling handicrafts. There were also mooching dogs and children playing around their parents’ stalls. “Hellooo!” sang one little girl, nestled in a rickety wagon atop a pile of dusty plastic sheets. 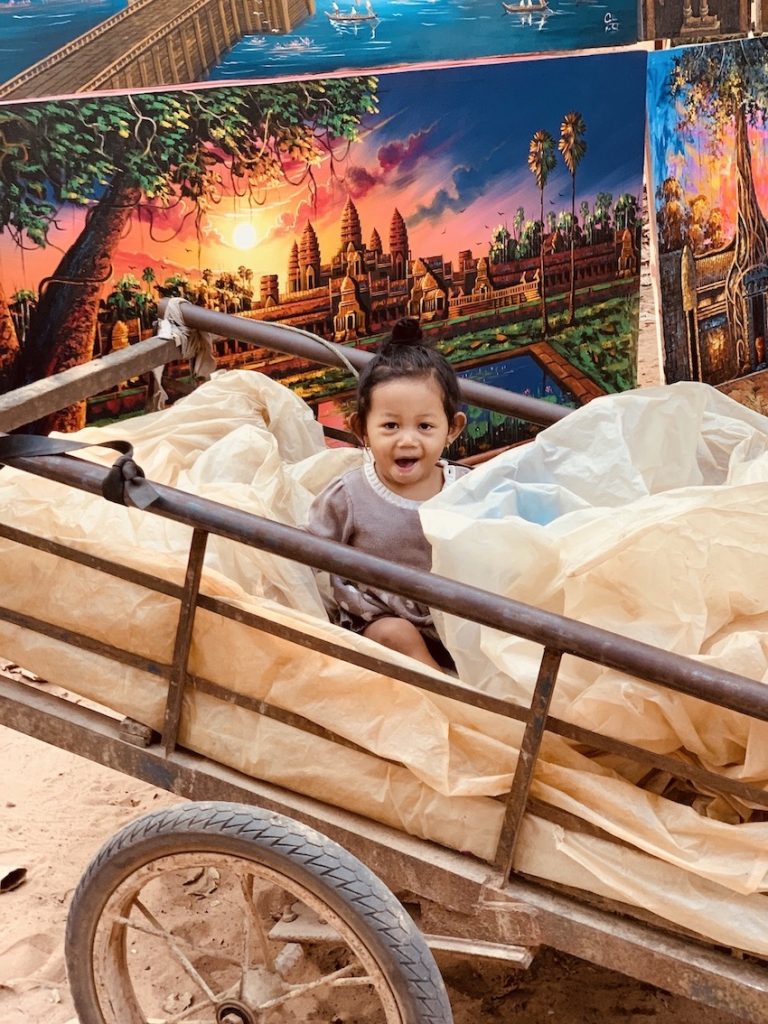 We also passed a group of men playing traditional Khmer folk music. The sound was somewhat sombre, perfectly matching their serious expressions. There was absolutely no pressure to give money. Rather, they’d left a line of wooden donation boxes in front of their stage for anyone who wished to leave a few notes or coins. 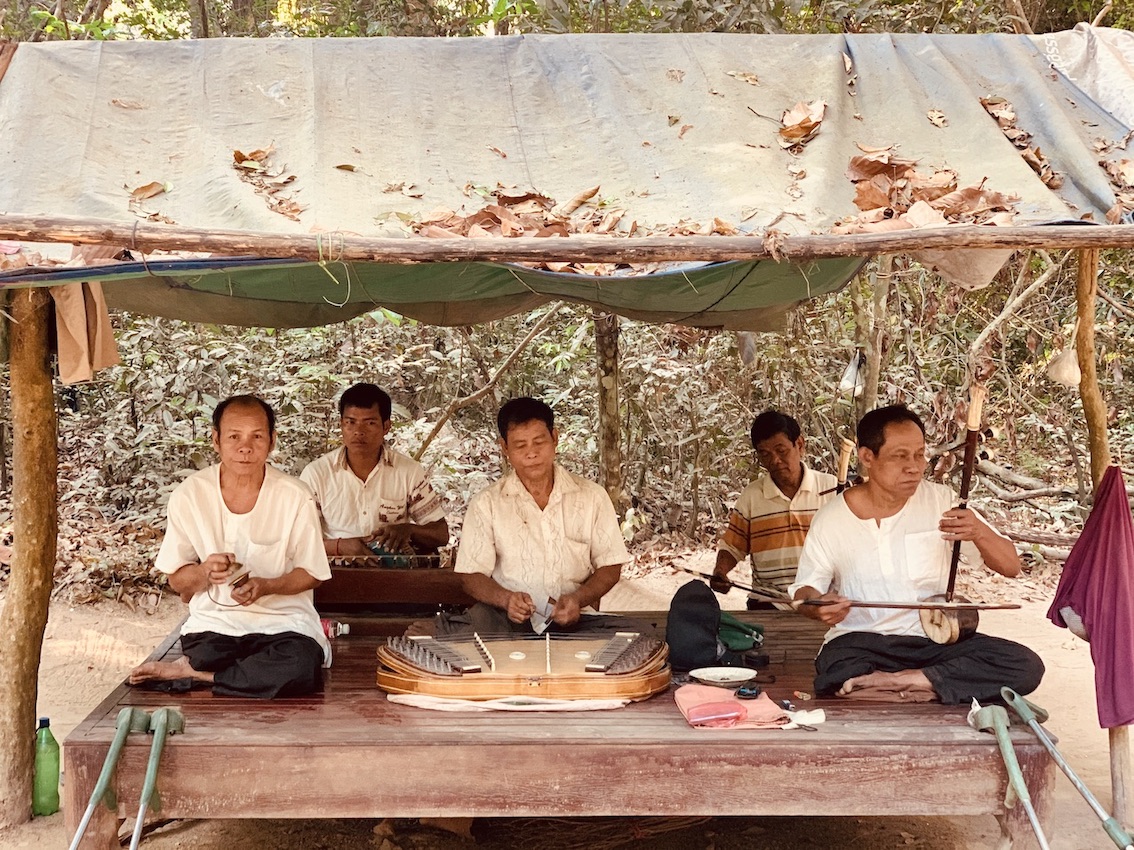 Eventually, we arrived at the entrance steps to the ruins. The site dates back to the 12th century, when King Jayavarman VII ordered its construction as a grand, Buddhist monastery. 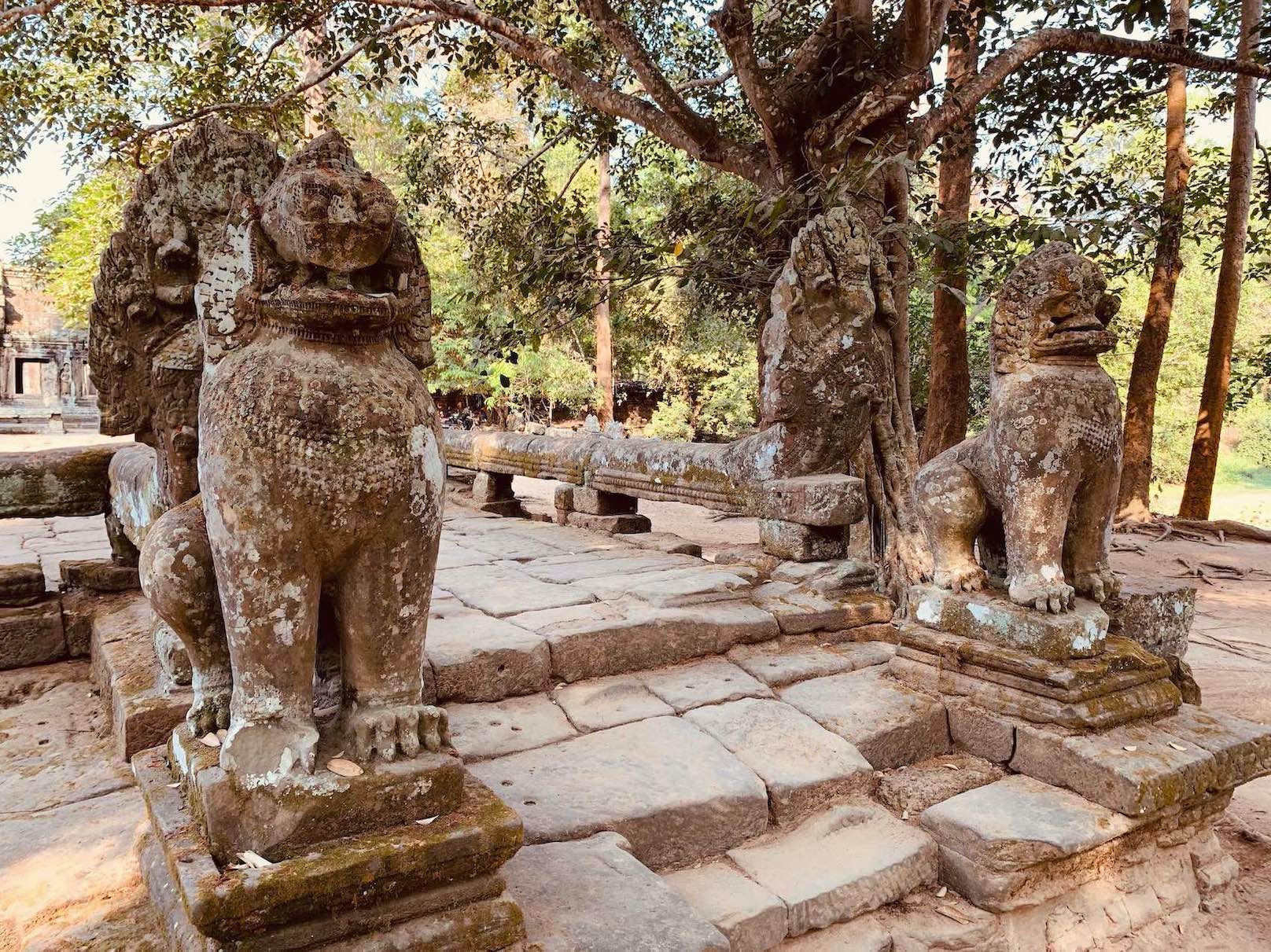 The name he bestowed upon the complex, Banteay Kdei, loosely translates as The Citadel of Chambers. It has picked up several other names over the centuries, such as Citadel of Monks’ Cells, a reference to the vast number of monks who once lived within these walls. 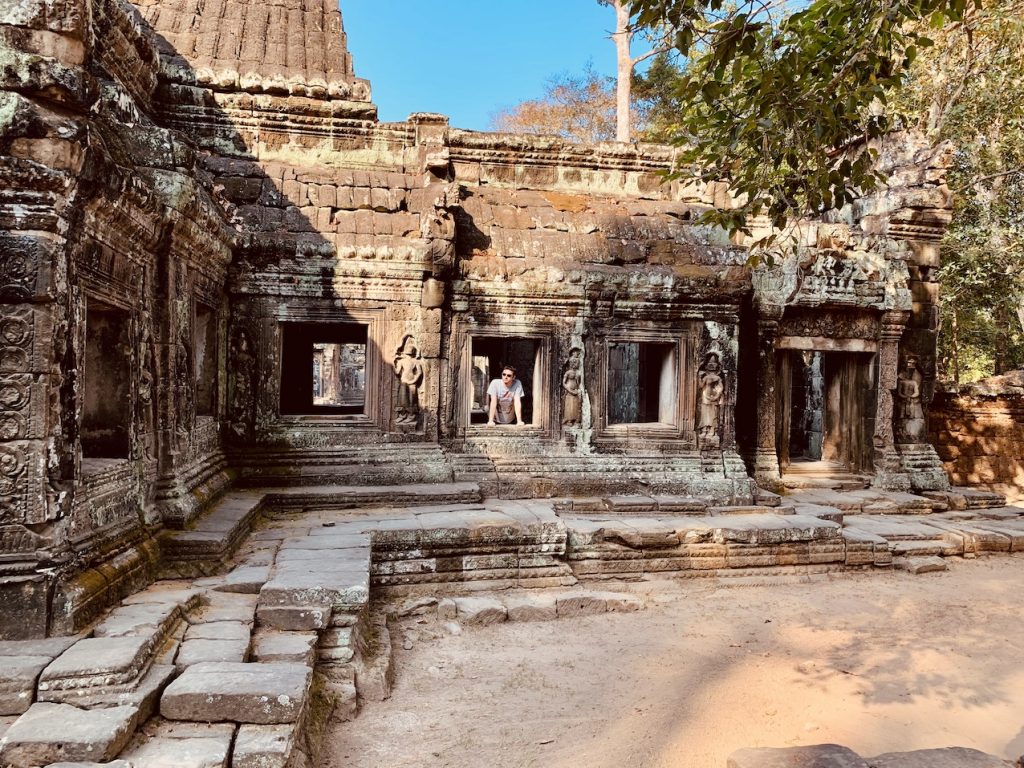 Having entered the ruins under a crumbling archway, we soon found ourselves swallowed up by a dizzying maze of corridors, chambers and courtyards.

The Citadel of Chambers. 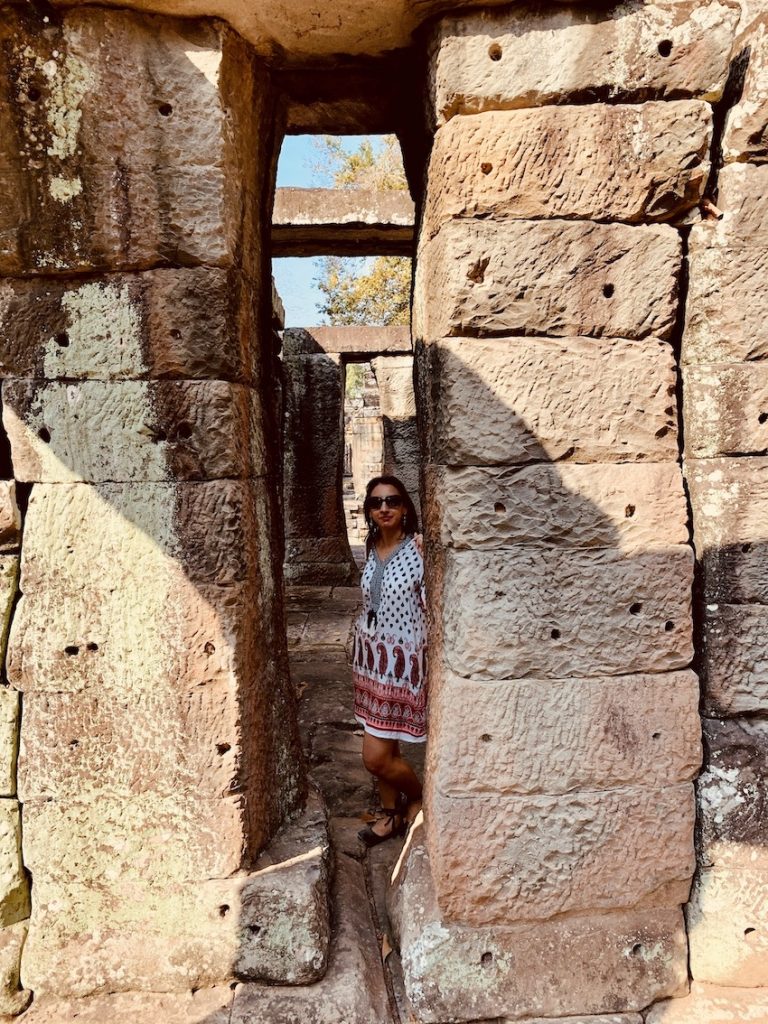 For reasons that continue to puzzle historians, Banteay Kdei was built with poor grade sandstone and, frankly, shoddy workmanship. As a result, its deterioration was swifter than that of its brothers and sisters. According to some experts, the king’s declining wealth may have been a factor. So, you know, he decided to cut a few corners. 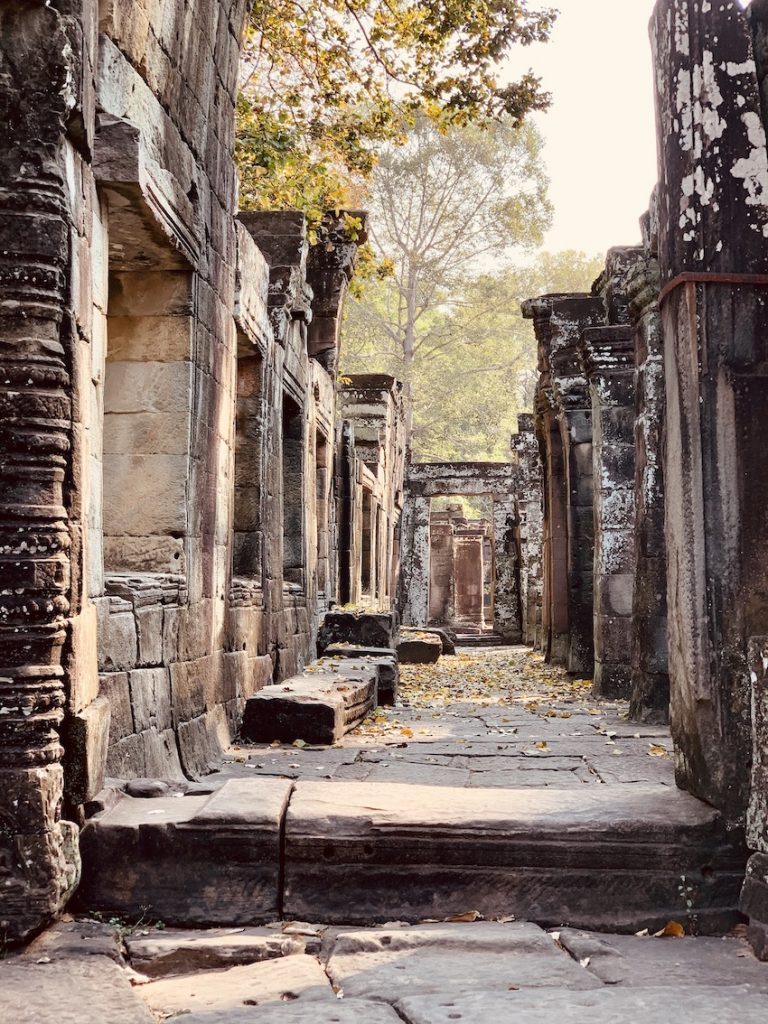 The general dilapidation certainly makes for an atmospheric experience, especially without the crowds. Stepping over piles of rubble… strolling down leafy, echoey halls… it felt a bit like we’d been transported into an episode of The Walking Dead. Without the zombies, naturally. 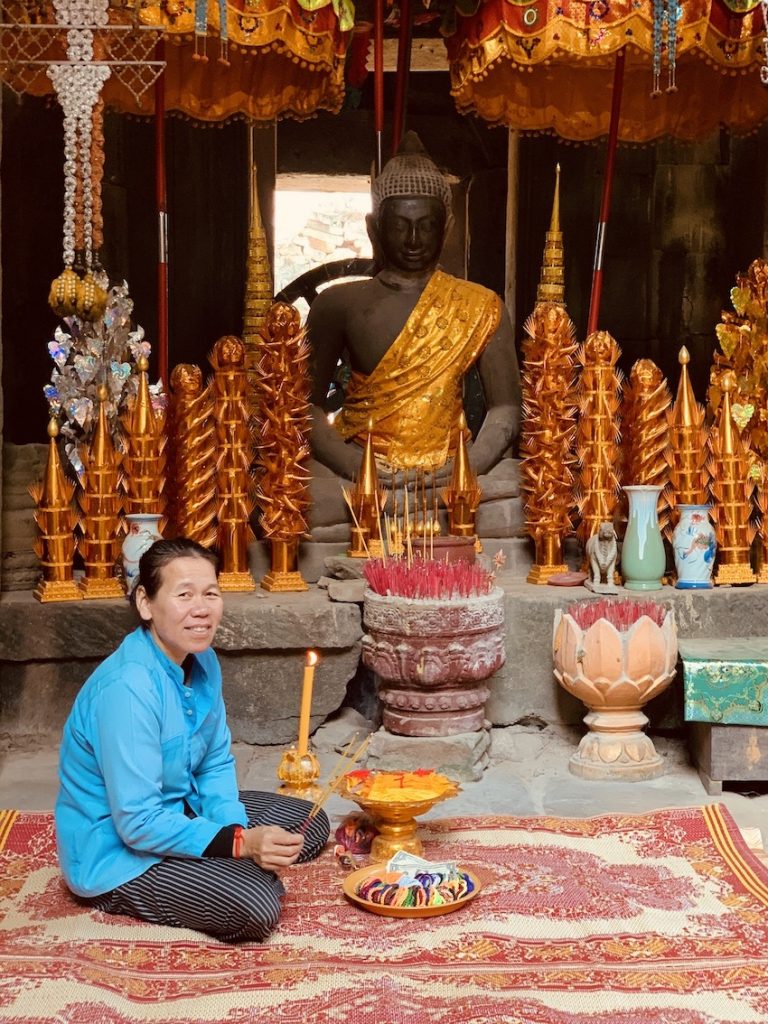 When we finally came across someone, it was this friendly shrine custodian. Happily, there was no hassle here either. Hence I was glad to give a dollar and light an incense stick. For my troubles, she gifted me an orange and red bracelet. In Buddhism, the wearing of such bracelets can bring good fortune and ward off evil spirits. 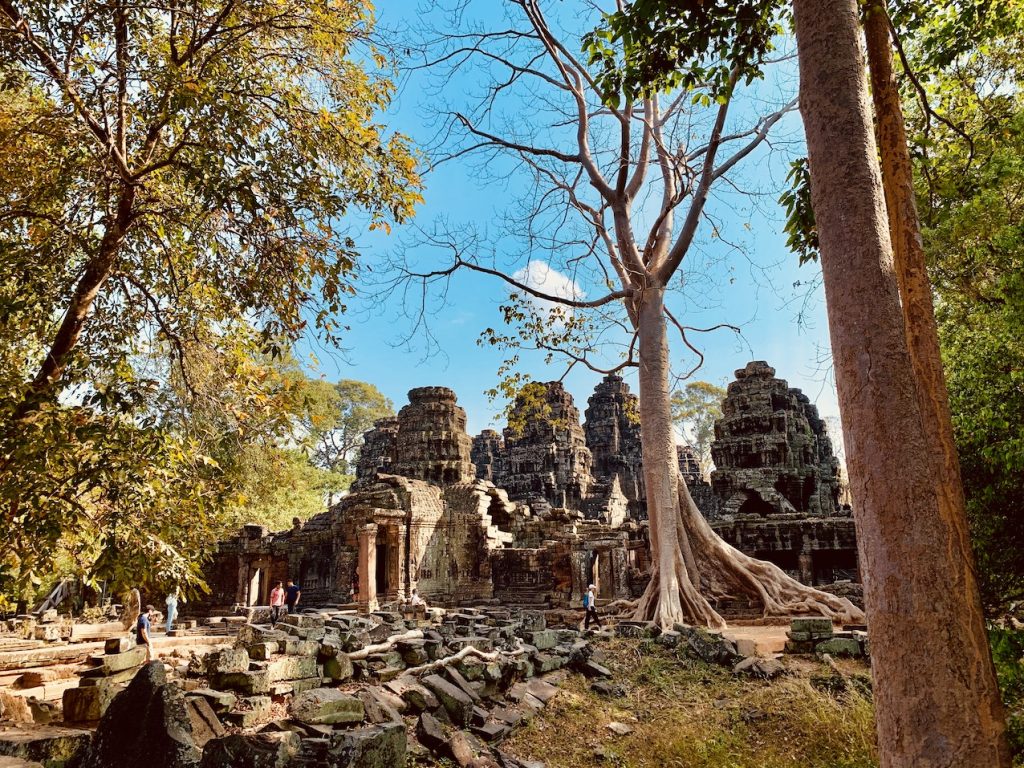 The most breathtaking part of our visit came when we emerged into the inner enclosure. It’s simply gorgeous, with towering trees, giant boulders and fine views across the temple’s sculpted towers. 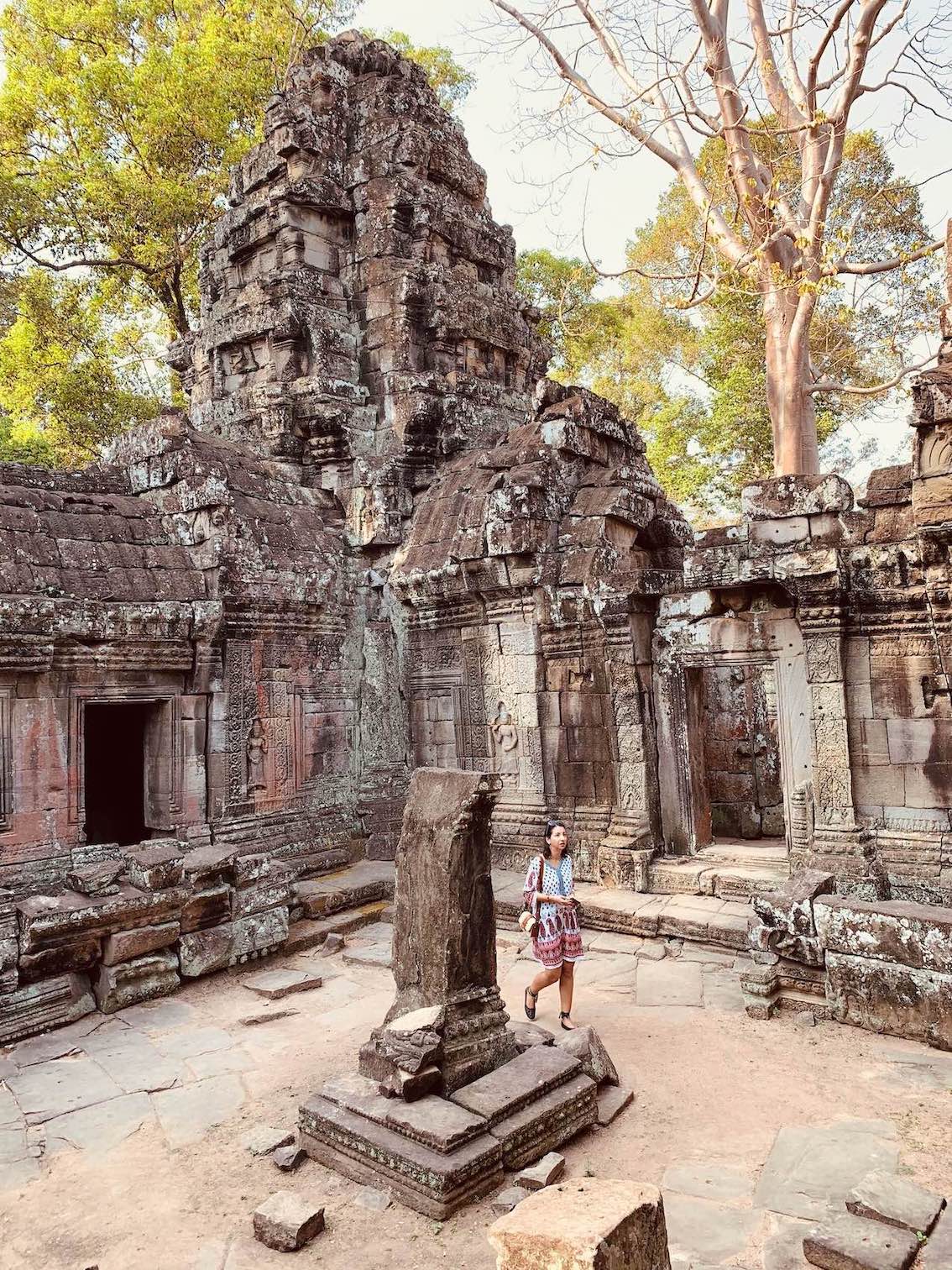 The inner enclosure also contains several galleries which link up to the towers. Back in the temple’s 14th century heyday, a giant library stood here too near the central sanctuary. 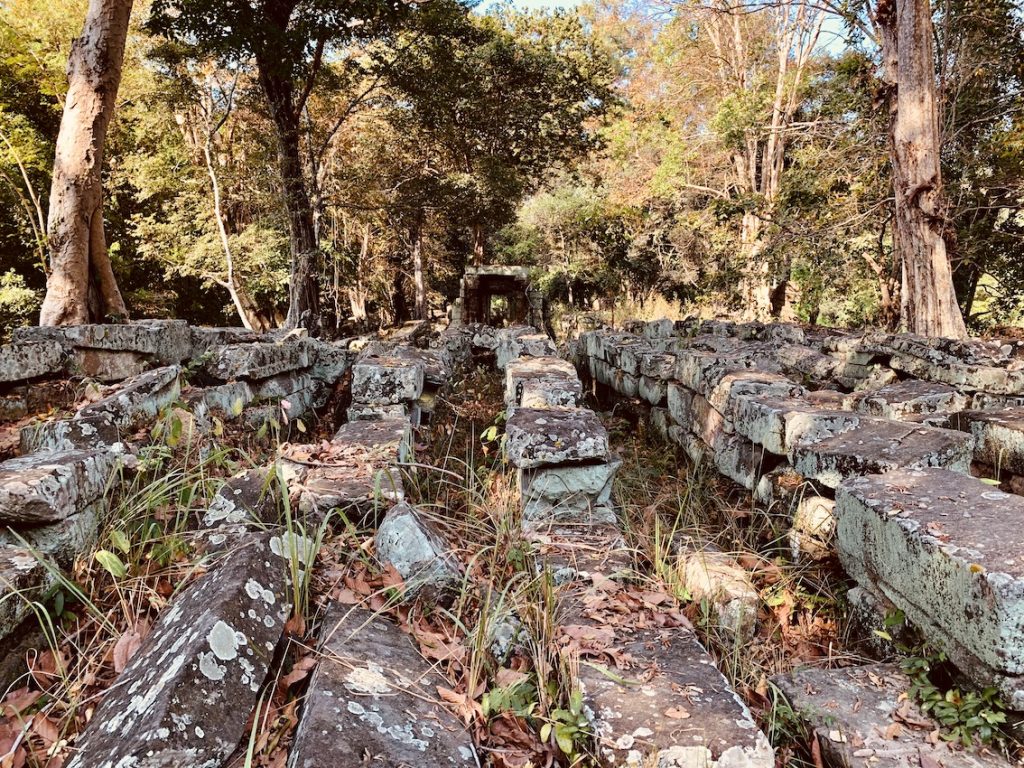 From the back end of the inner enclosure one can wander off deep into the surrounding forest amid tweeting birds, buzzing insects and occasional lulls of engulfing silence. 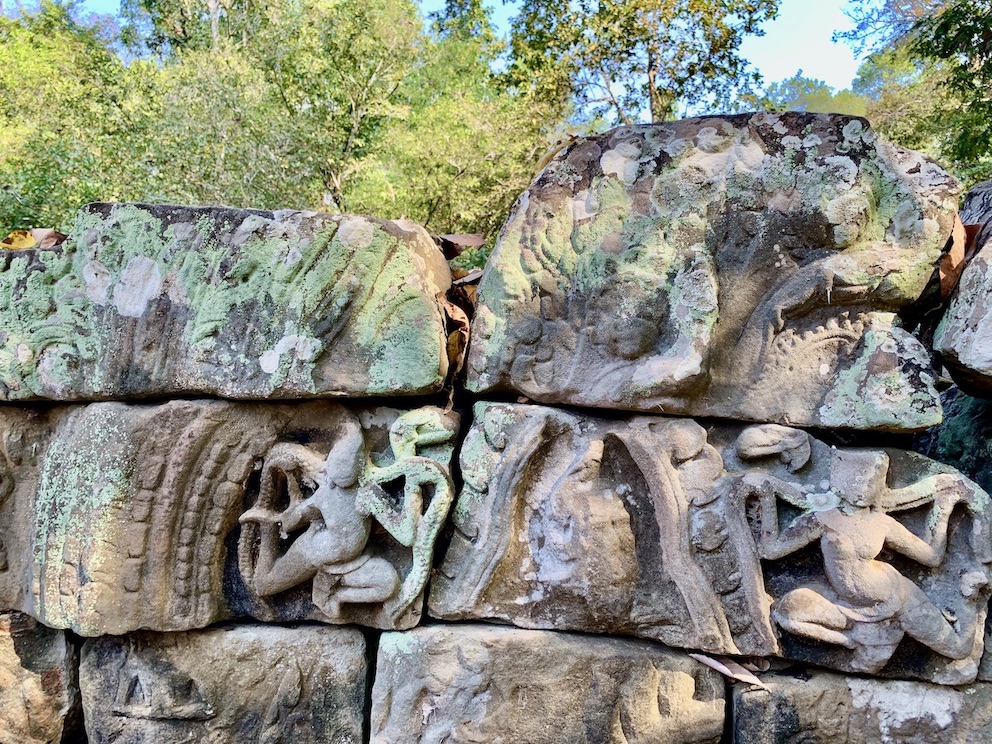 Among the visitors who came to Banteay Kdei that day, few seemed interested in exploring the woodland. Thus we had the run of the place as we followed a loop path running along the walls with their engraved mythical creatures. 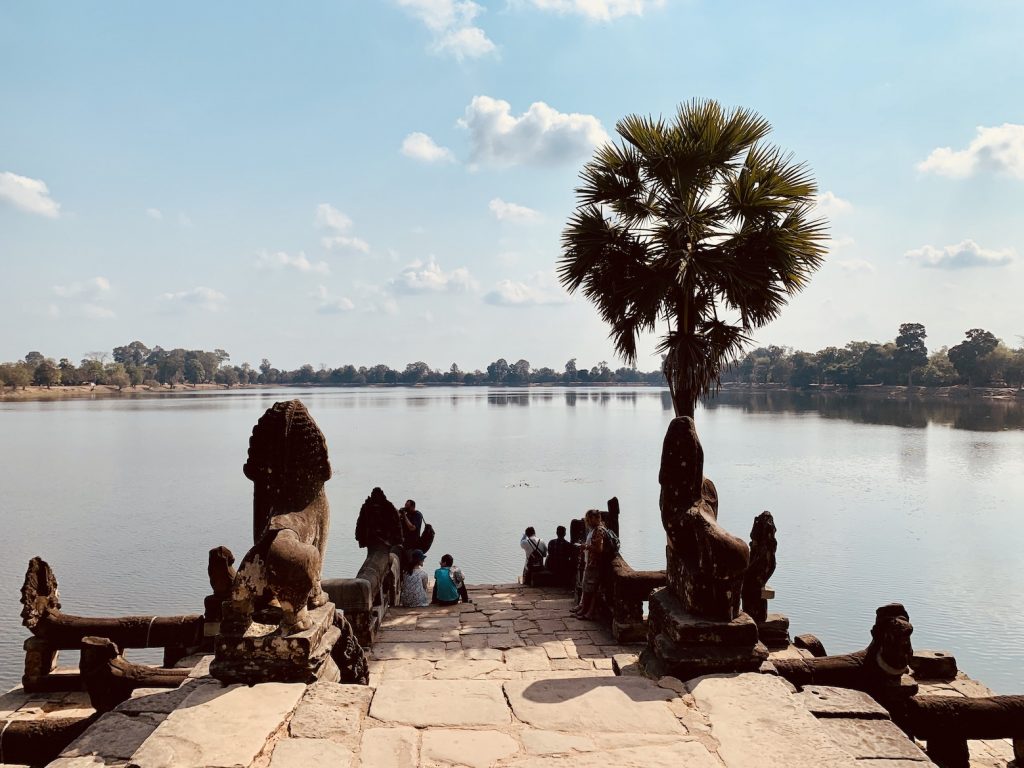 As if one needed another reason to visit Banteay Kdei, how about this stunning lake, just across the road from its east entrance. Just head up the short flight of stone steps to this dramatic, multi-tiered platform, adorned with naga balustrades and guardian lions. 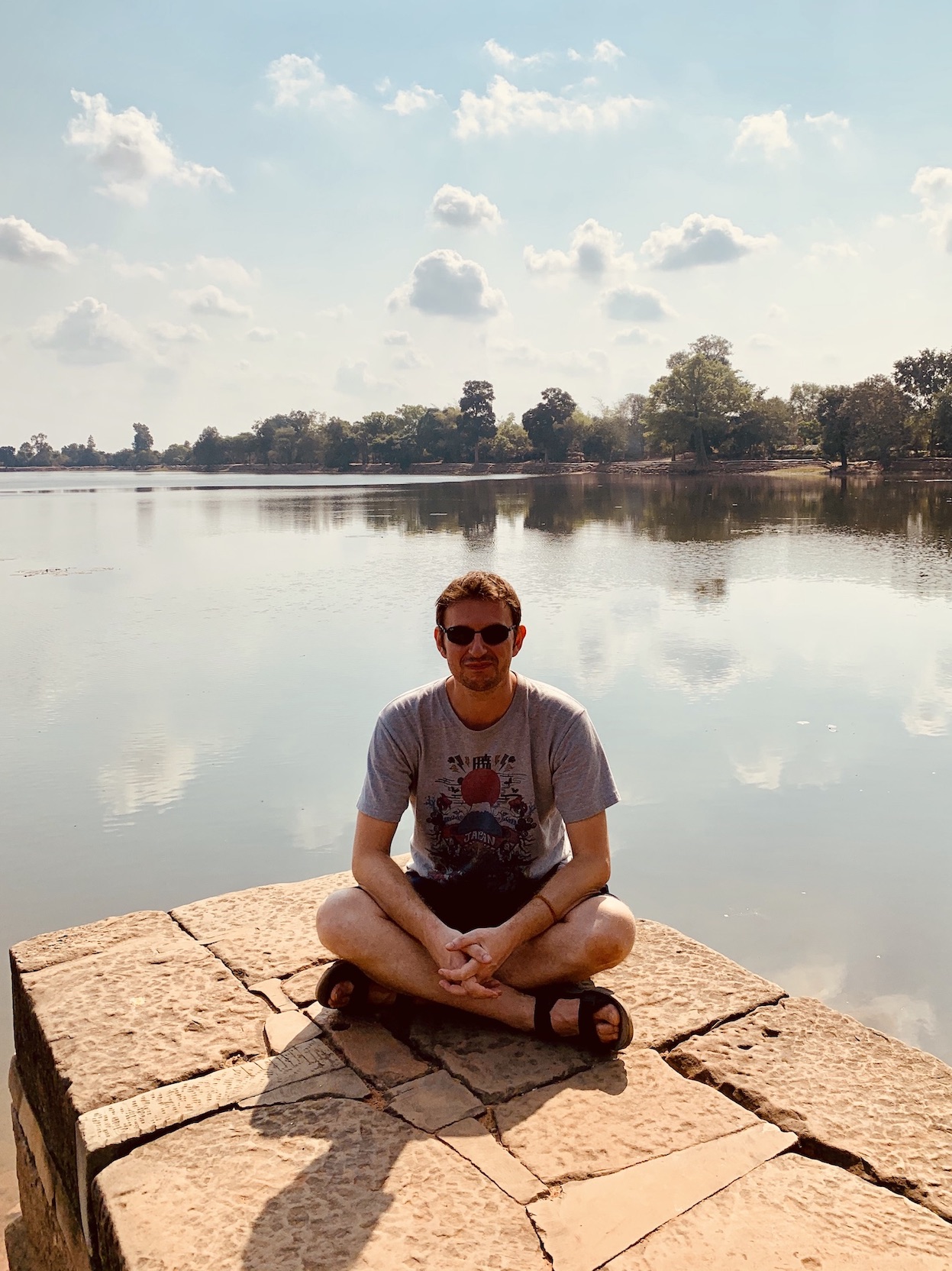 Known as Srah Srang, this was King Jayavarman VII’s royal bathing pool. He had the platform built from sandstone within the shade of a dozen large trees. Summer after summer, this is where the king swam with his wives, and any other special guests fortunate enough to be invited. 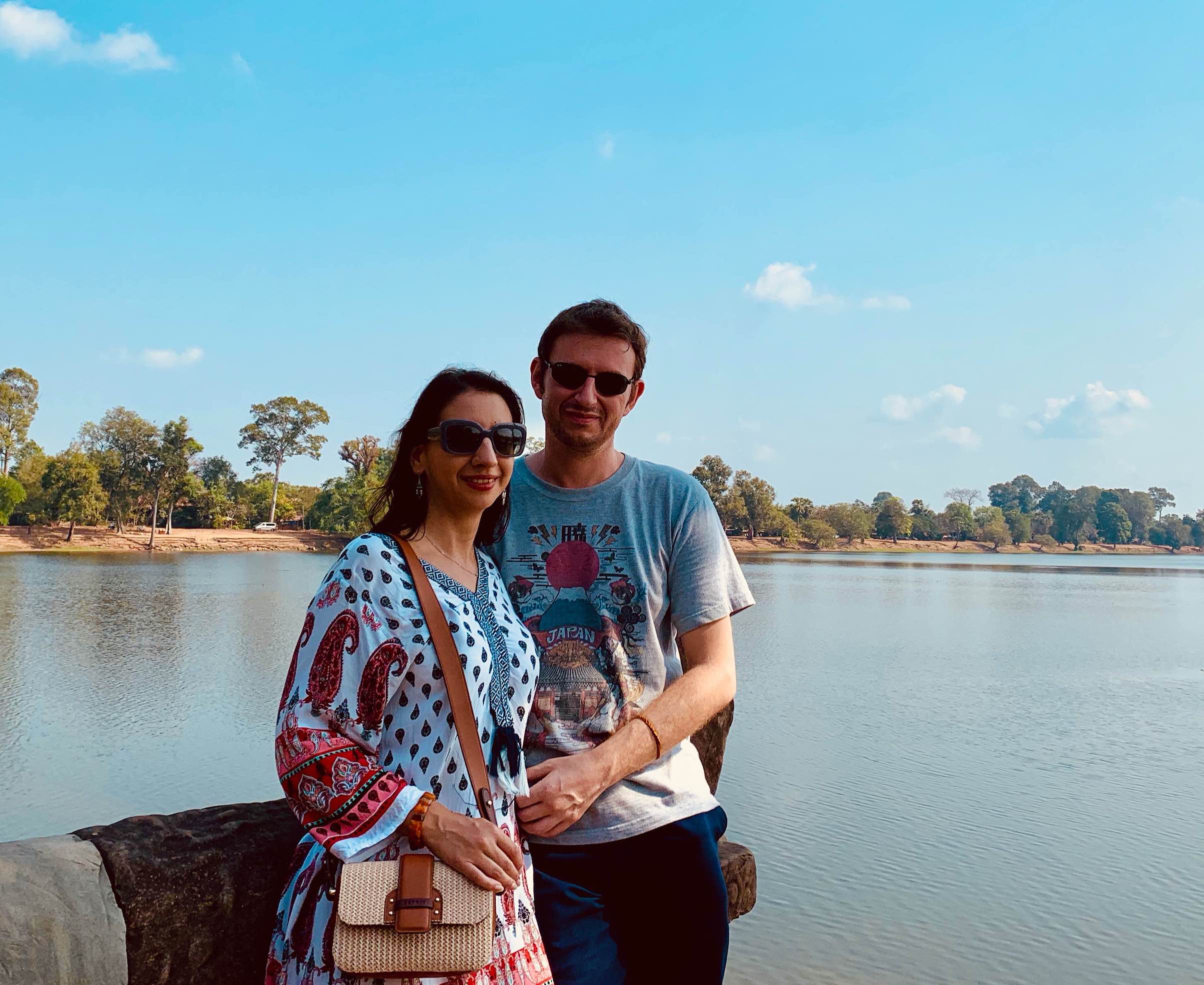 The lake is a fantastic spot for sunset and a wise choice for those wanting a quieter experience. Indeed the masses typically flock to Angkor Wat at sundown, leaving this as an excellent view point for the discerning photographer. 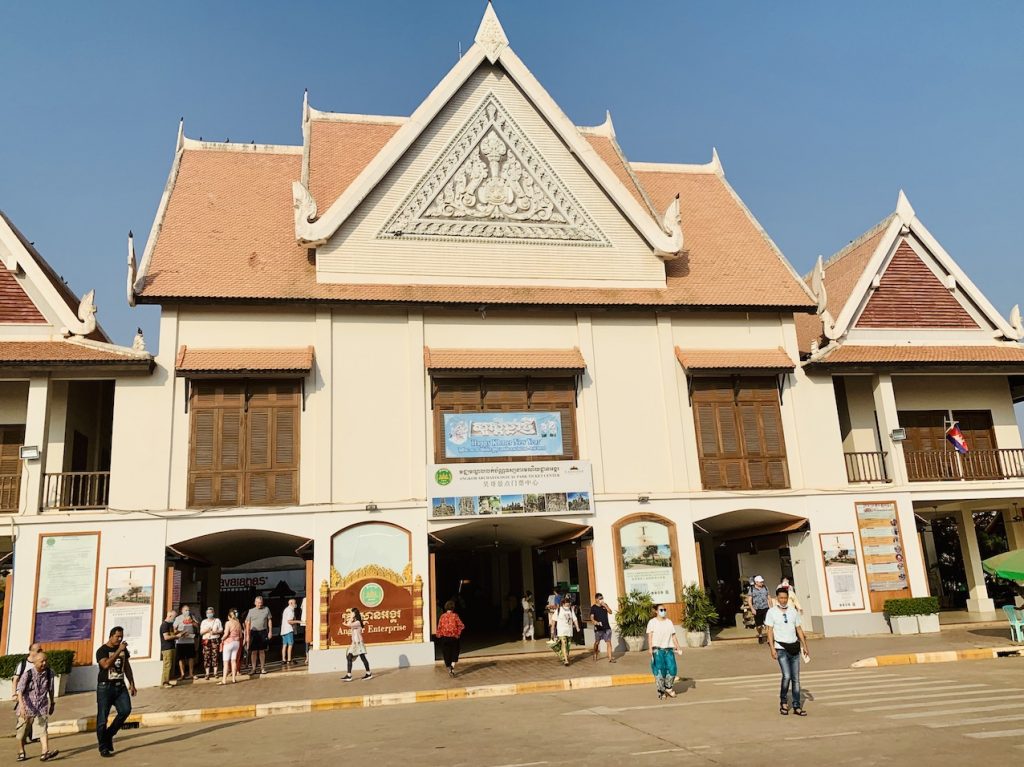 You can visit Banteay Kdei with The Angkor Pass, purchased both online and in person at The Angkor Archaeological Park Ticket office.