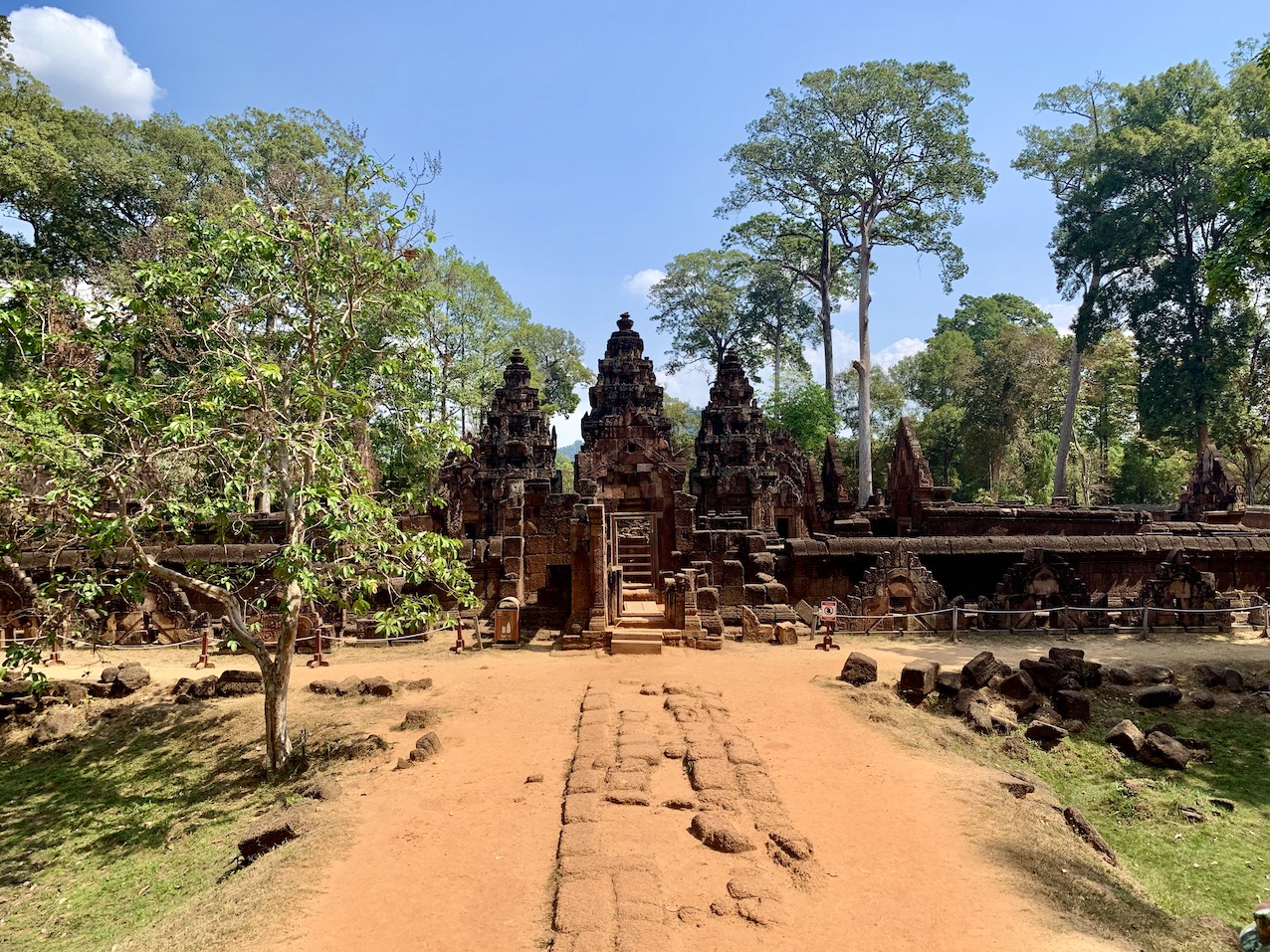 One day, when I look back on my adventures exploring The Angkor Temples, I imagine I might reflect on which of these magnificent creations was my favourite. Even at this early stage I feel Banteay Srei could be a strong contender. Located a considerable thirty two kilometres from the centre of Siem Reap, many casual tourists miss the place altogether. 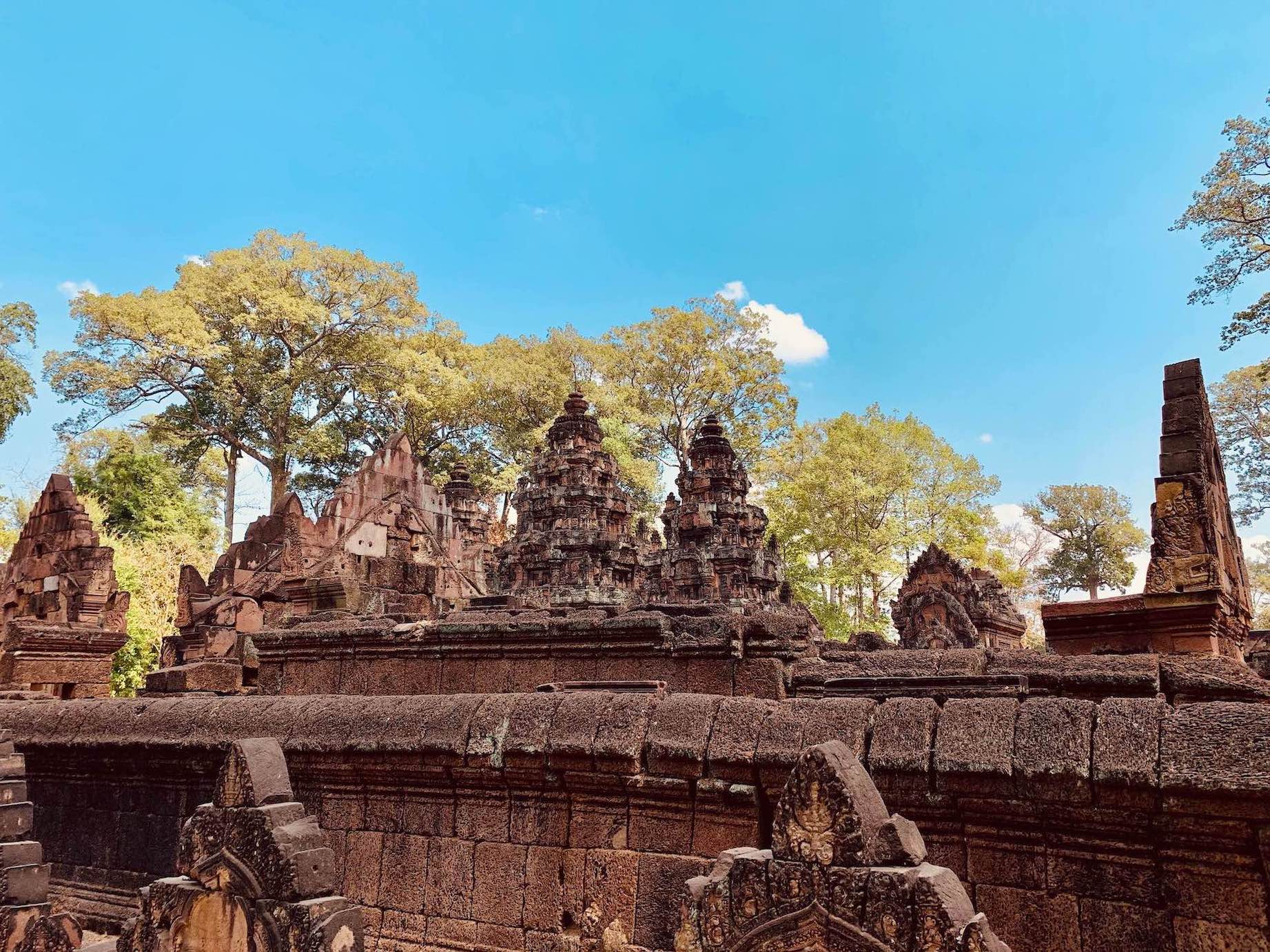 After all, there are just so many gorgeous temples to visit, most of which sit bunched together within easy reach from the city. However, in this writer’s humble opinion, it would be scandalous to come all the way to Cambodia and not see Banteay Srei. 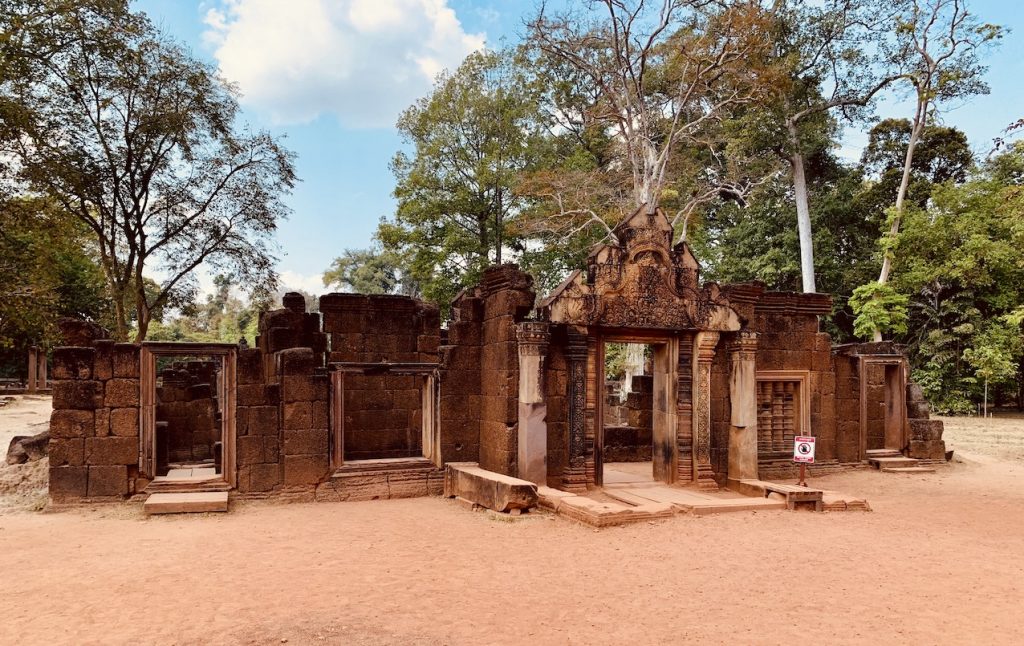 First impressions can be deceiving.

As first impressions go, Banteay Srei certainly keeps its cards close to its chest. After forty minutes crunching through the country roads in our tuk tuk, my reaction was muted as we arrived at the east entrance. Uh… this is it? 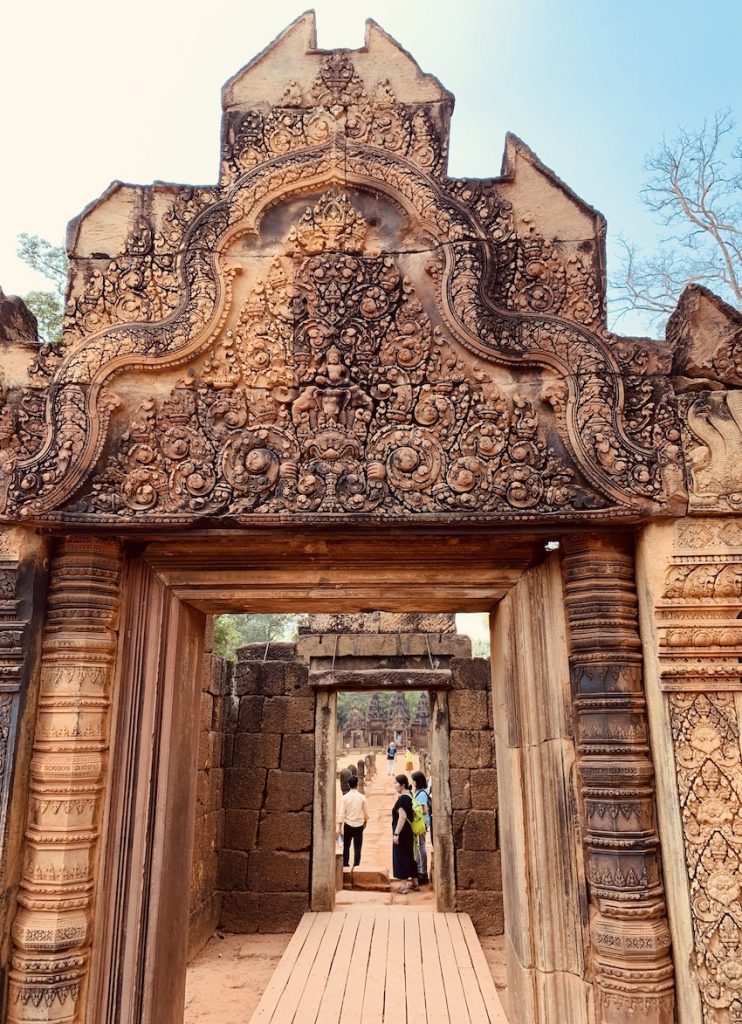 Indeed, this is one of the smallest temples of the ancient Khmer Empire. But it’s not as diminutive as it first appears. Something that swiftly becomes clear as you make your way under the entrance arches into the spacious, dusty inner courtyard. 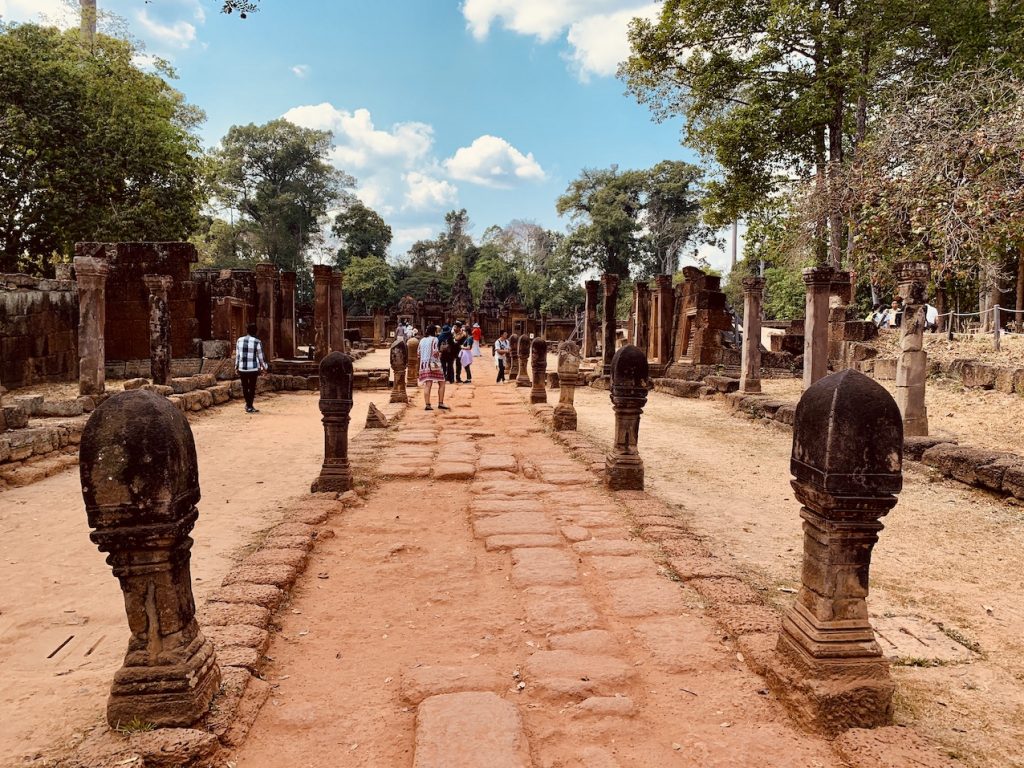 Moreover, what it lacks in size, Banteay Srei definitely makes up for with a history and design that sets it apart from every other Angkor temple. Firstly, it dates back to 987 and is one of the few temples in the region not commissioned by a king. In fact, it’s widely believed that a Brahman priest connected to King Jayavarman V ordered its construction. 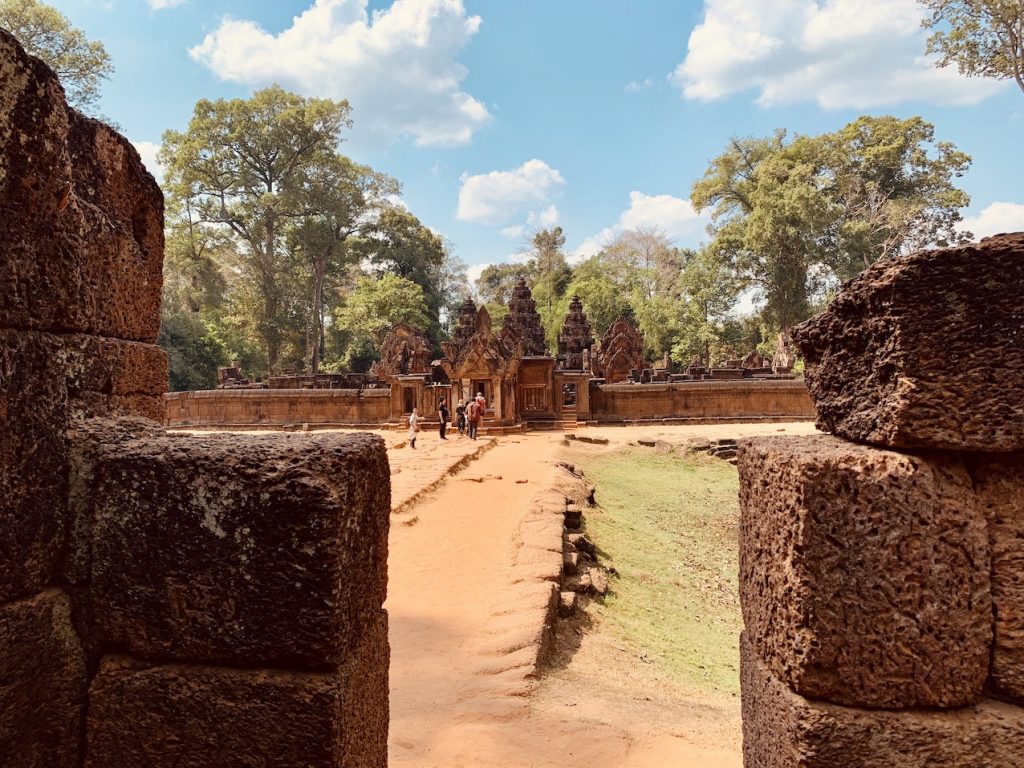 Secondly, construction took place using red sandstone, which gives the complex a highly distinctive pinkish hue. Furthermore, historians believe that a team of women built the place! As the theory goes, the carvings on display here are too intricate for the hand of a man. Not convinced? How about Banteay Srei’s name then, which literally means The Citadel of the Women.

The Citadel of the Women. 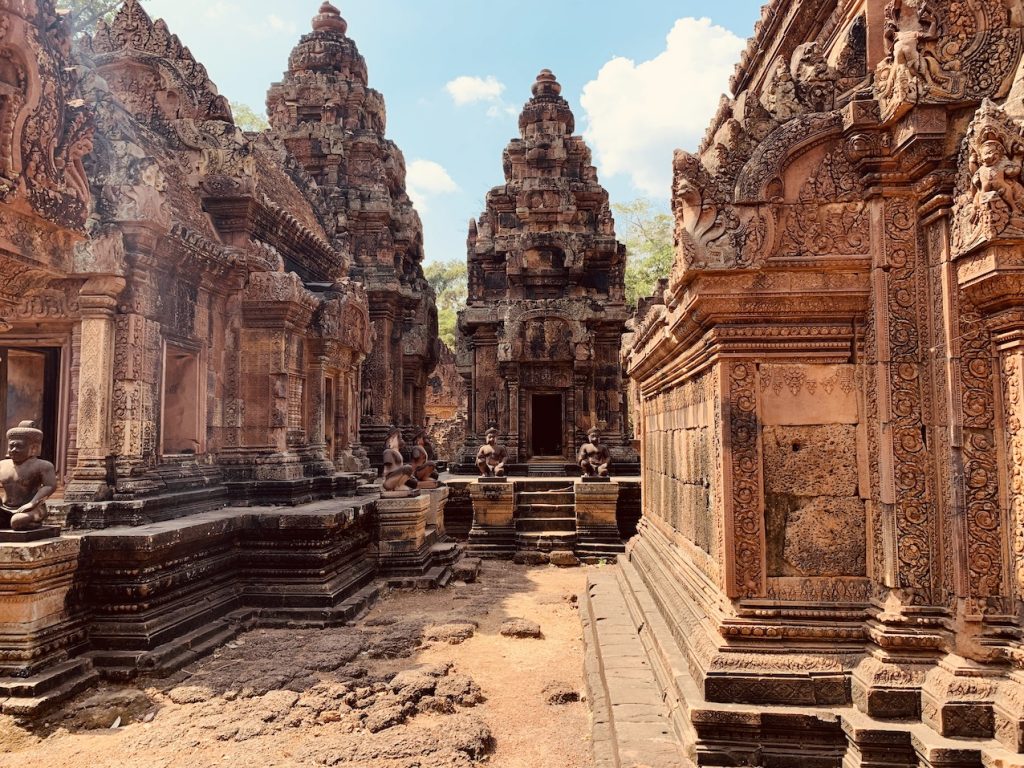 You’ll find many of the temple’s most impressive carvings right in the centre of the complex. They’re scattered among the main shrines, the remains of the so-called Sanctuary and its flanking northern and southern libraries. Championed as the “jewel in the crown of Angkorian art”, these are some of the finest stone carvings anywhere in the world! 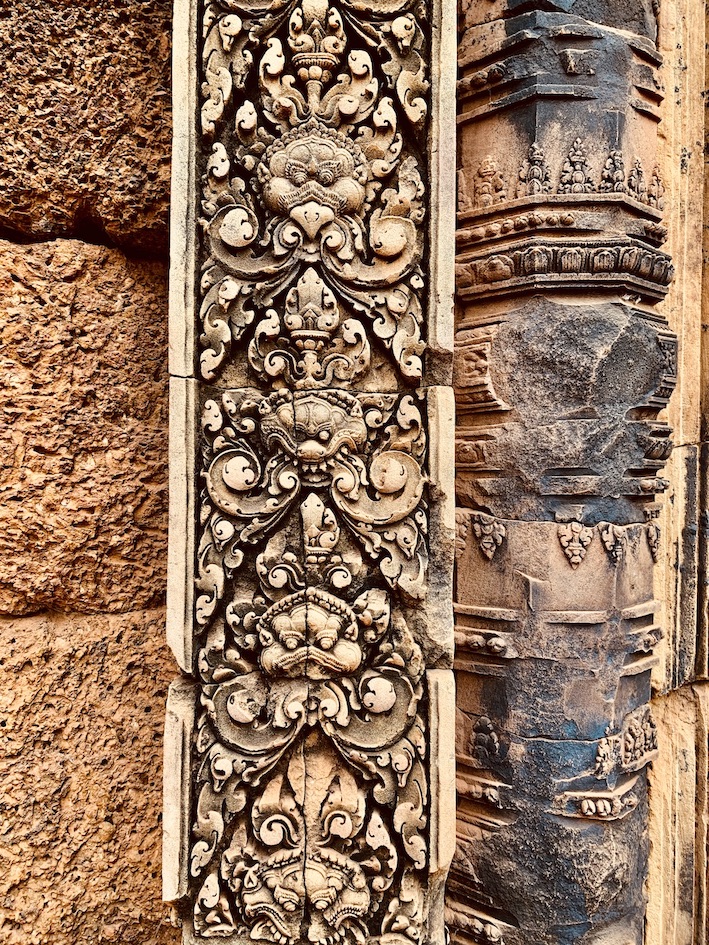 So amazing it simply couldn’t have been a man.

It’s well worth slowing your visit down and taking the time to seek out Banteay Srei’s fascinating details. Expect to see thousands of lotus leaves and female deities clutching flowers. There are plenty of mythical guardians on display too, including human figurines with monkey heads. Several scenes depict The Ramayana, one of the major Sanskrit epics of ancient India. 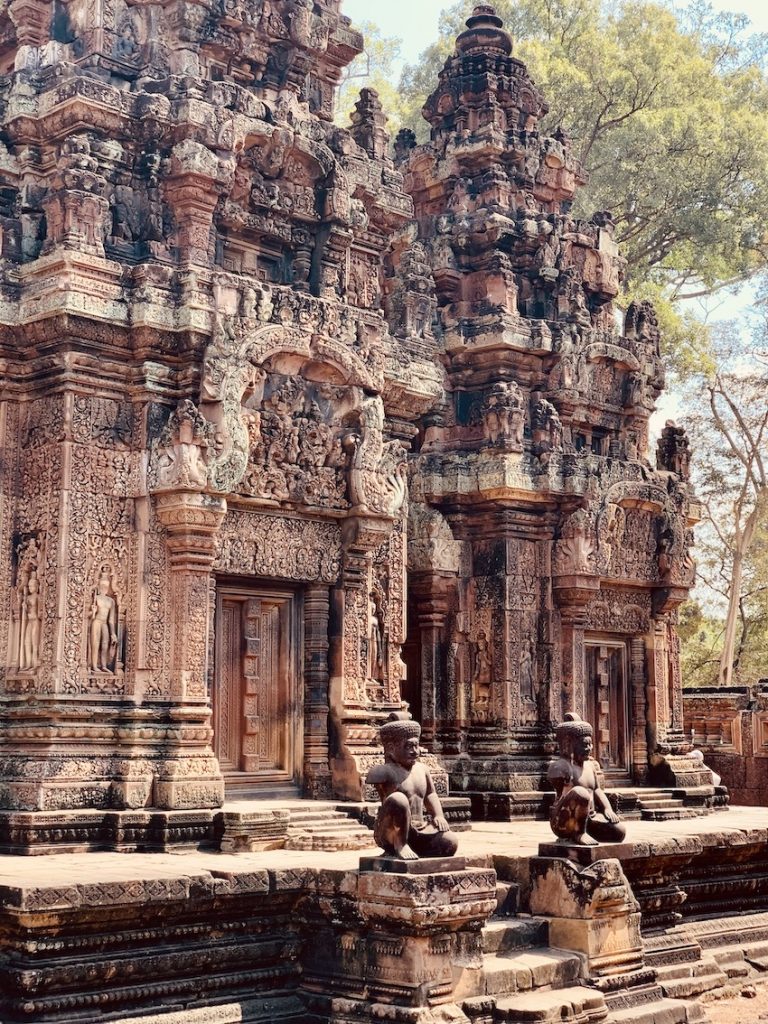 As with so many of The Angkor Temples, it’s common for visitors to catch a photoshoot or two. From wedding pictures to magazine shoots and even filming for TV shows, you never know who or what you might bump into. 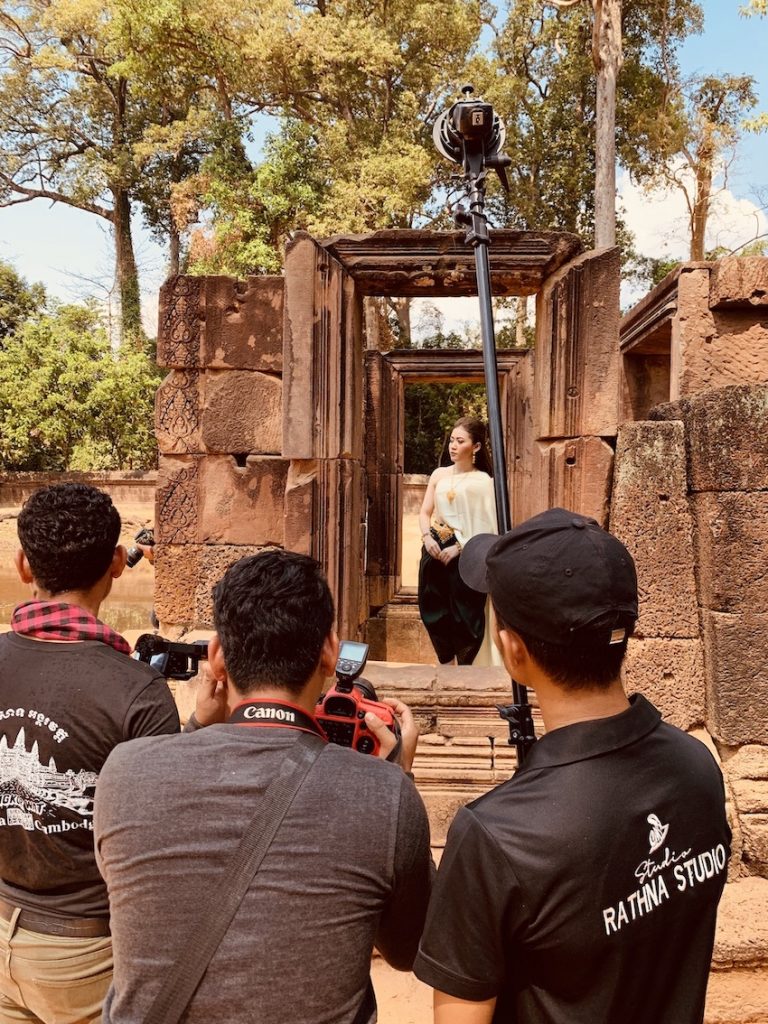 Getting arty at Banteay Srei.

Amazingly, this incredible temple sat entirely lost in the jungle for thousands of years. It was a French archaeologist who discovered its ruins in 1914. Following an extended period of inactivity and looting, the esteemed French novelist and politician André Malraux was arrested for stealing several statues from the temple. 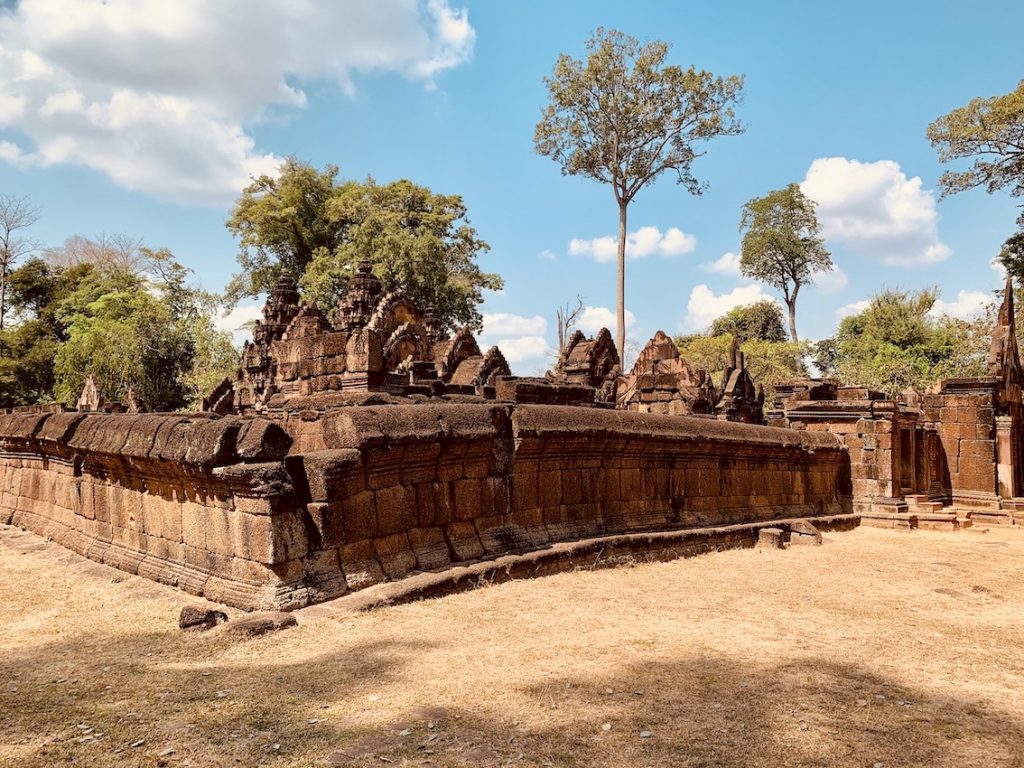 Finally, in 1930, a grand restoration project began using as many original architectural elements as possible. It was a huge undertaking of course, and one that remains active today. Historians say a key moment came in 2003 when the team installed a drainage system to drastically reduce long term damage. 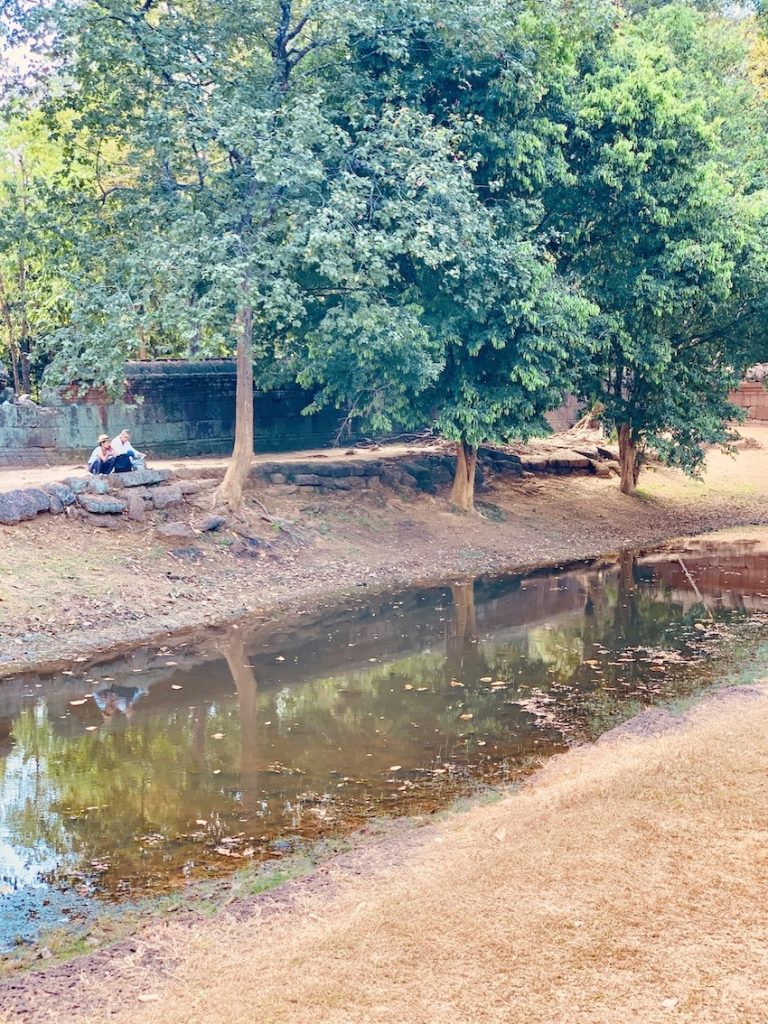 On your way out, why not take a walk around the temple’s northern and southern sides. The moat and surrounding trees make for some beautiful spots for a rest. As for the timing of your visit, I’d recommend avoiding mid-afternoon as there are very few spots of shade to hide in within the temple itself. 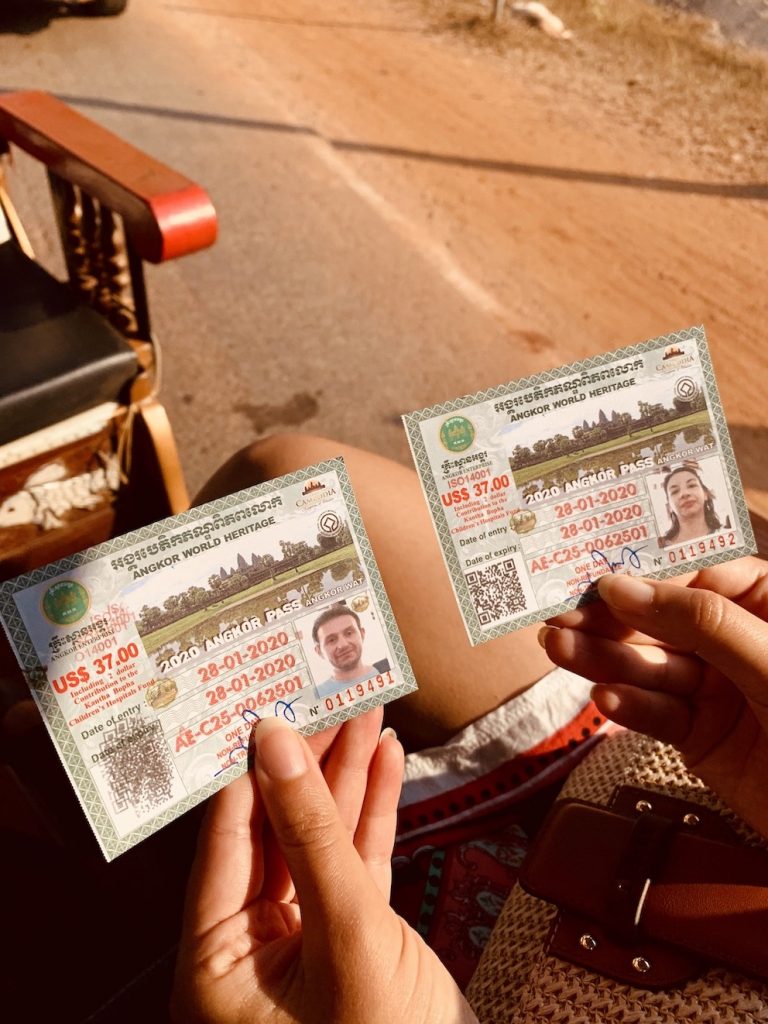 You can visit Banteay Srei with The Angkor Pass, purchased both online and in person at The Angkor Archaeological Park Ticket office. 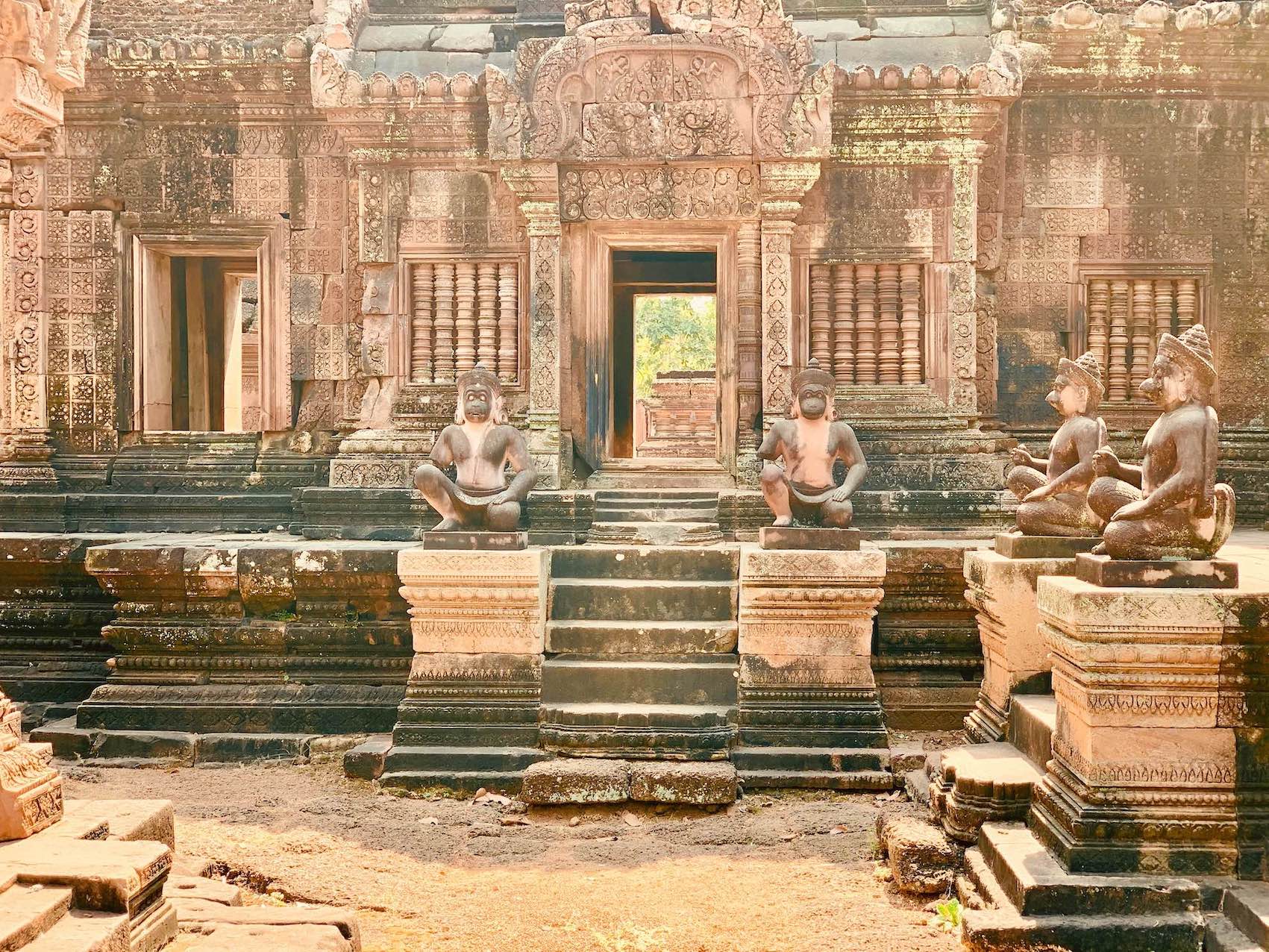