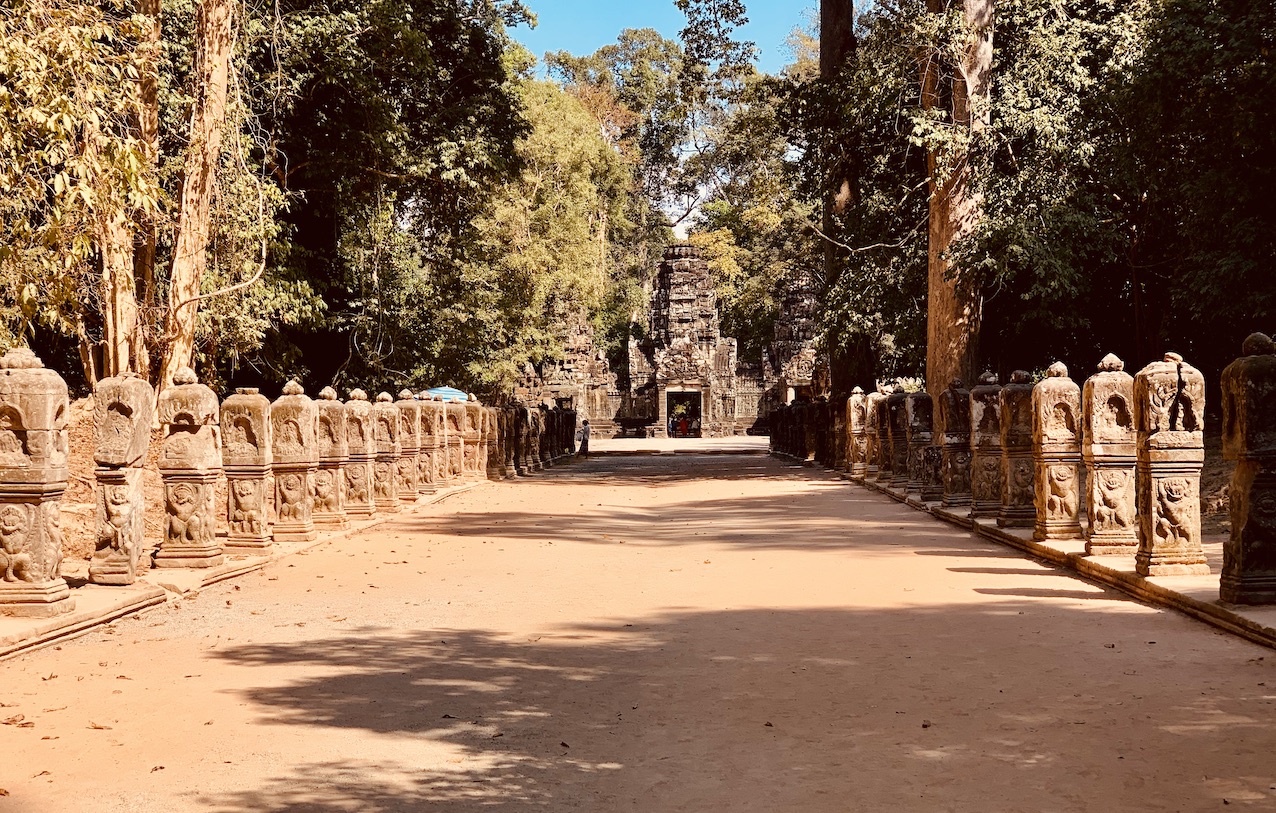 Angkor Wat has one of the world’s most celebrated sunrises. Bayon Temple is all about its dramatic carved faces. Ta Prohm has stupendously tangled trees and the Tomb Raider connection. Banteay Kdei boasts a wondrous location opposite Srah Srang Lake, while Banteay Srei treats you to the most intricate hand carvings on Planet Earth. 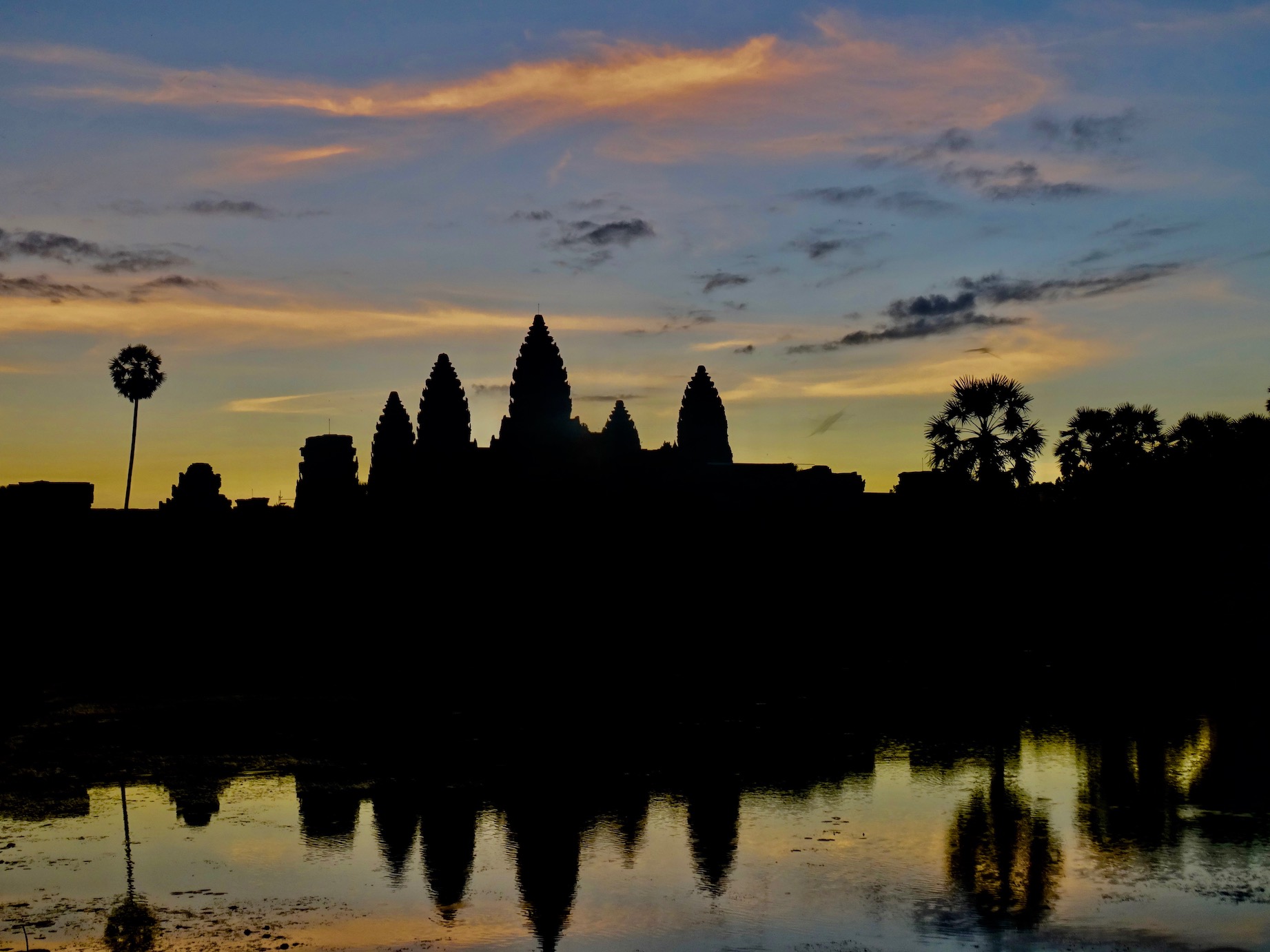 A stunning sunrise unfolding during my visit to Angkor Wat.

Hugely impressed by each of The Angkor Temples we’d seen thus far, we wondered what Preah Khan would bring to the table as we made the long, dusty approach to its north entrance. 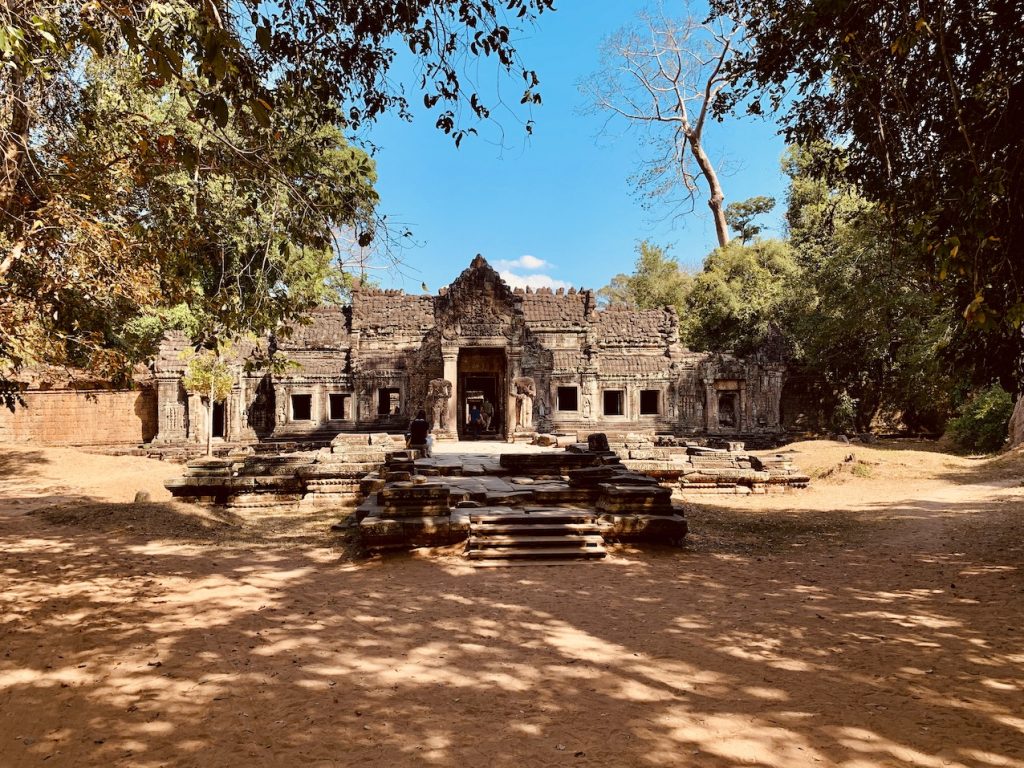 Preah Khan’s driving force is that it’s bloody huge! In fact, there are historians claiming it may be the largest of The Angkor Temples. So vast is Preah Khan that it was essentially a temple city rather than a standard complex. In its heyday, the massive compound was home to over one hundred thousand people. Moreover, it even featured a prestigious Buddhist University. 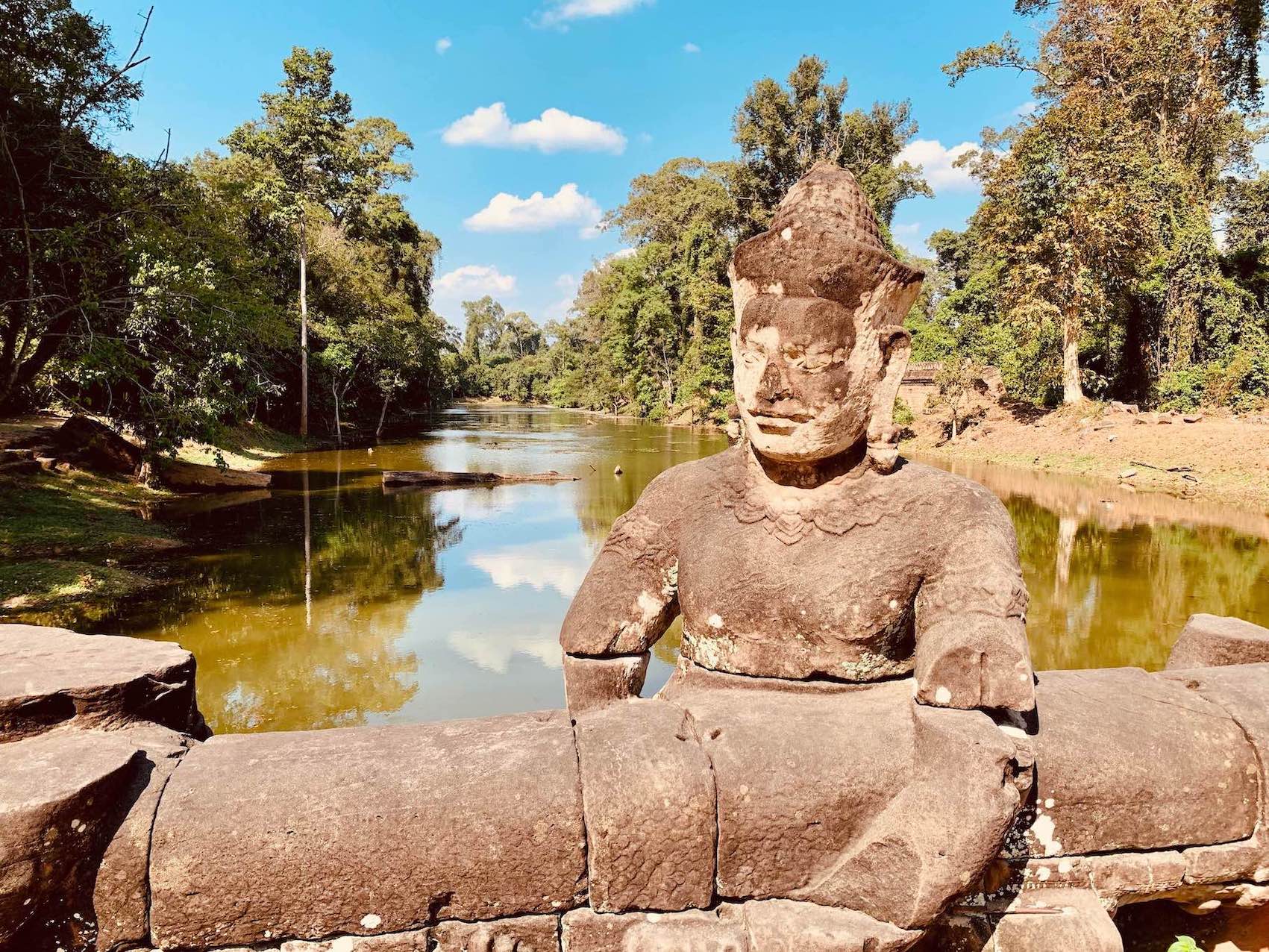 Like so many Angkor Temples, it was King Jayavarman who ordered its creation. Known in Khmer as Temple of the Holy Sword, construction began in the late 11th century. The King later lived here for a few years while waiting for Angkor Thom to be built. Eventually, he had the place dedicated to his father, 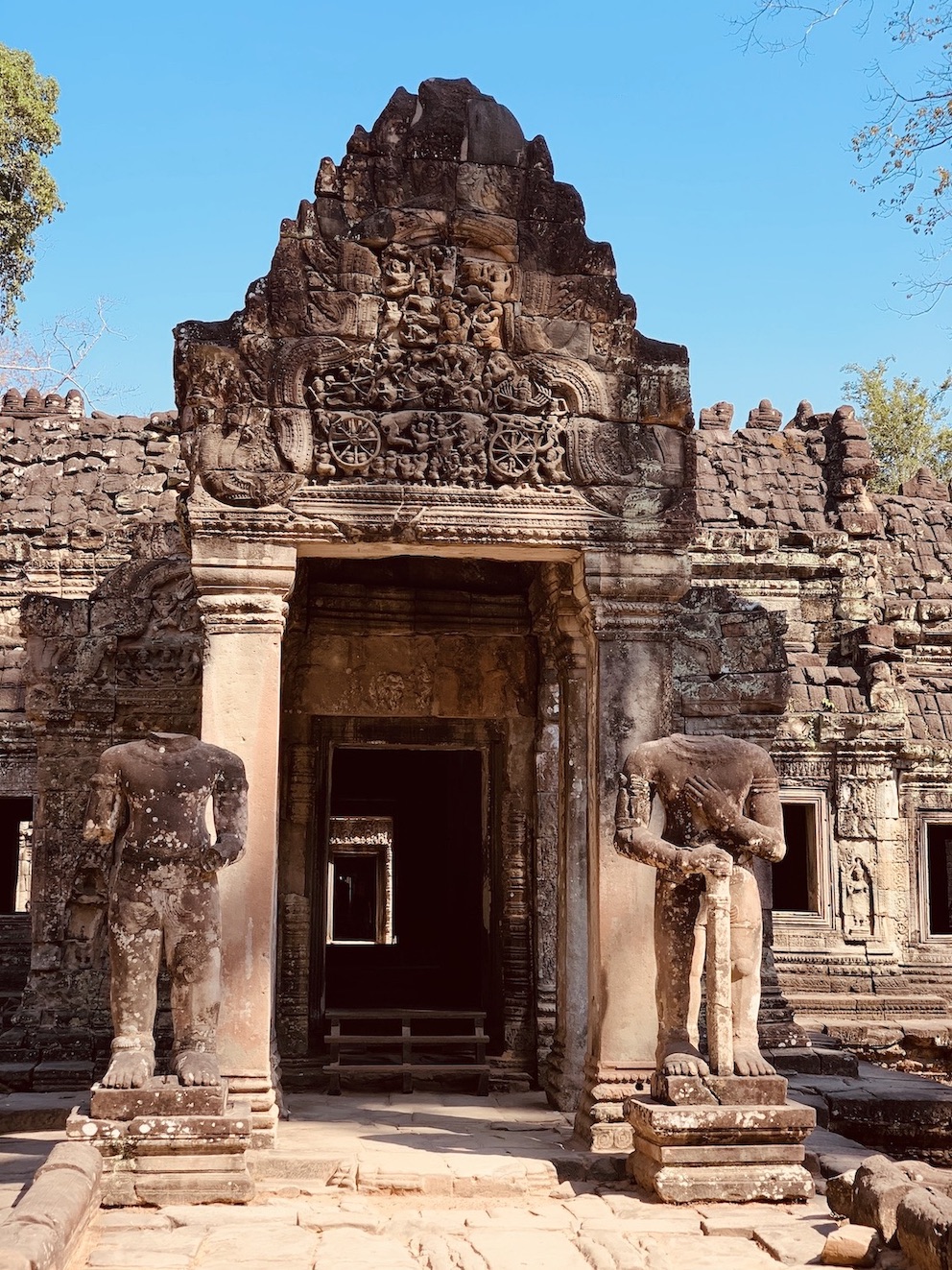 When visiting Preah Khan, you can enter via numerous gates. At the north entrance, a pair of headless warriors stand on either side of the main doorway. 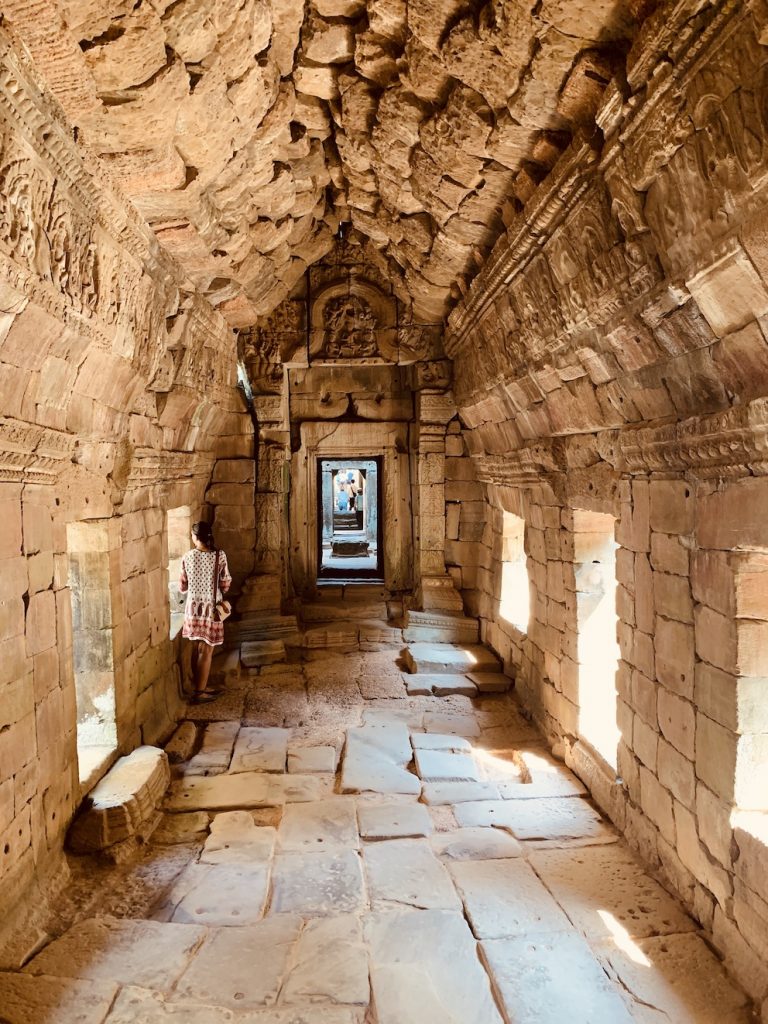 We certainly didn’t need to be told about Preah Khan’s vastness. In terms of size, no other temple we’d seen so far could compare. The place is an absolute maze, hence it’s easy to get yourself lost. If one chooses to simply go straight, its vaulted corridors can feel infinite.

Temple of the Holy Sword. 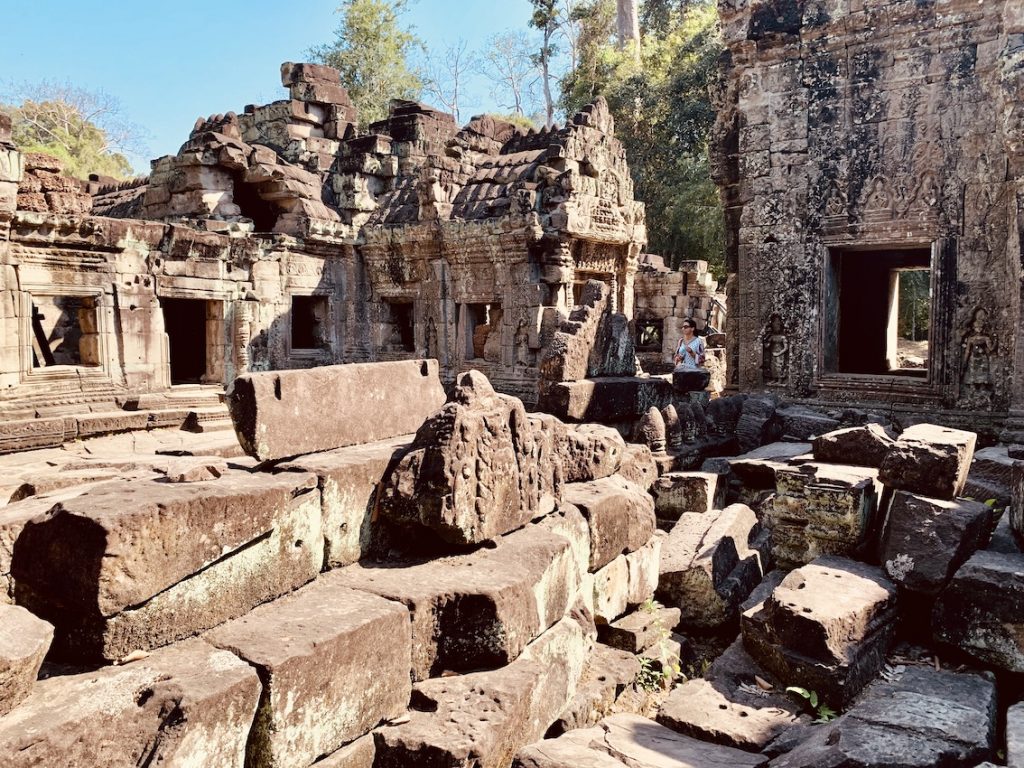 Branch off here and there and you’ll find yourself emerge into open courtyards and squares of impassable, overgrown rubble. Thanks to the amazing work of The WMF (World Monuments Fund), Preah Khan is actually very well preserved. Especially in comparison to more high profile temples nearby, such as Ta Prohm. 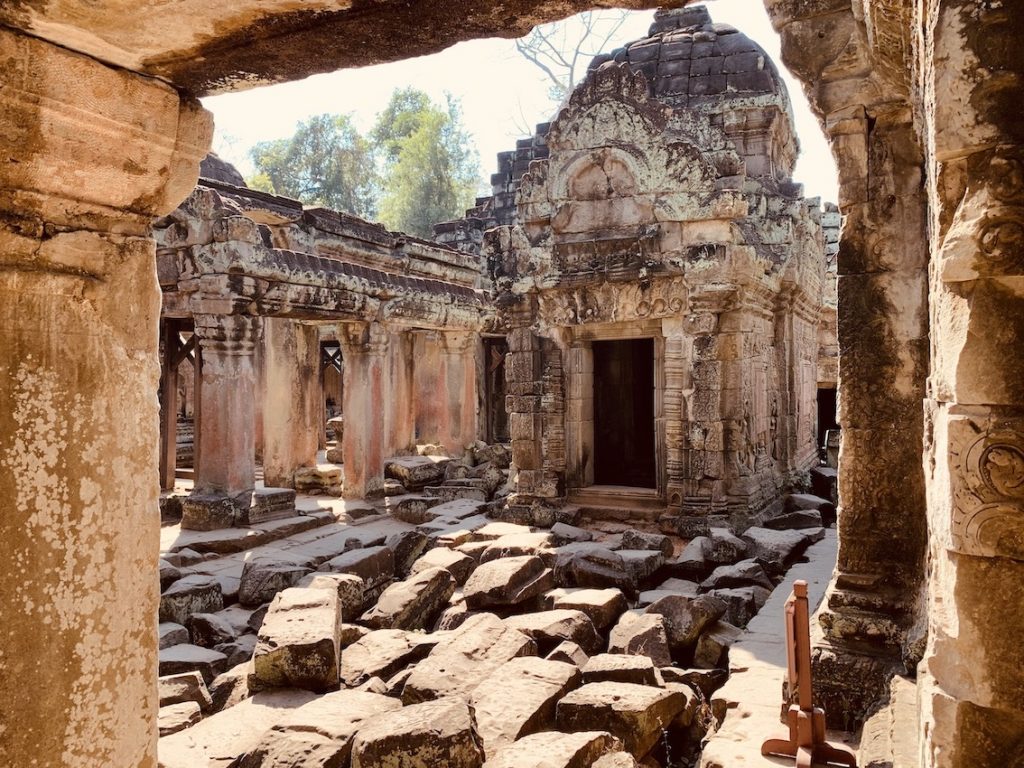 Restoration work began in 1991. This was the first Angkor Temple project of its kind, following the end of Cambodia’s terrible civil war. Some historians have described Preah Khan as the ultimate fusion temple. Built as a Buddhist complex, it features thousands of surviving Buddha images. 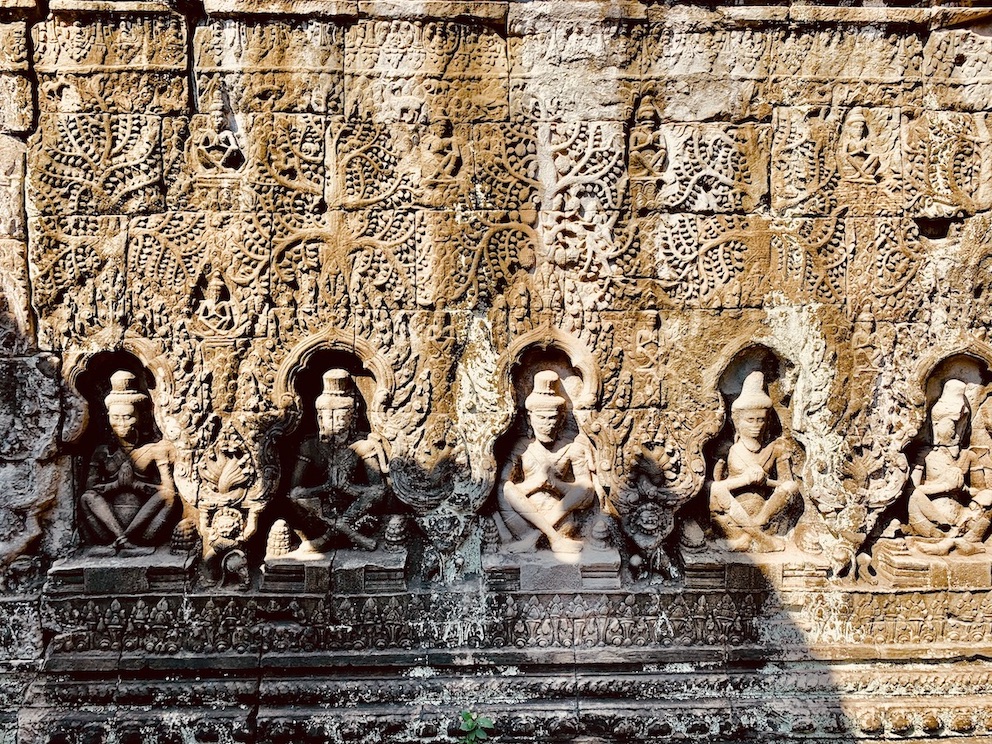 However, King Jayavarman changed and even destroyed most of the original images in the 13th century after his conversion to Hinduism. Thus visitors can also spot plenty of carvings dedicated to Shiva, Vishnu and Brahma. 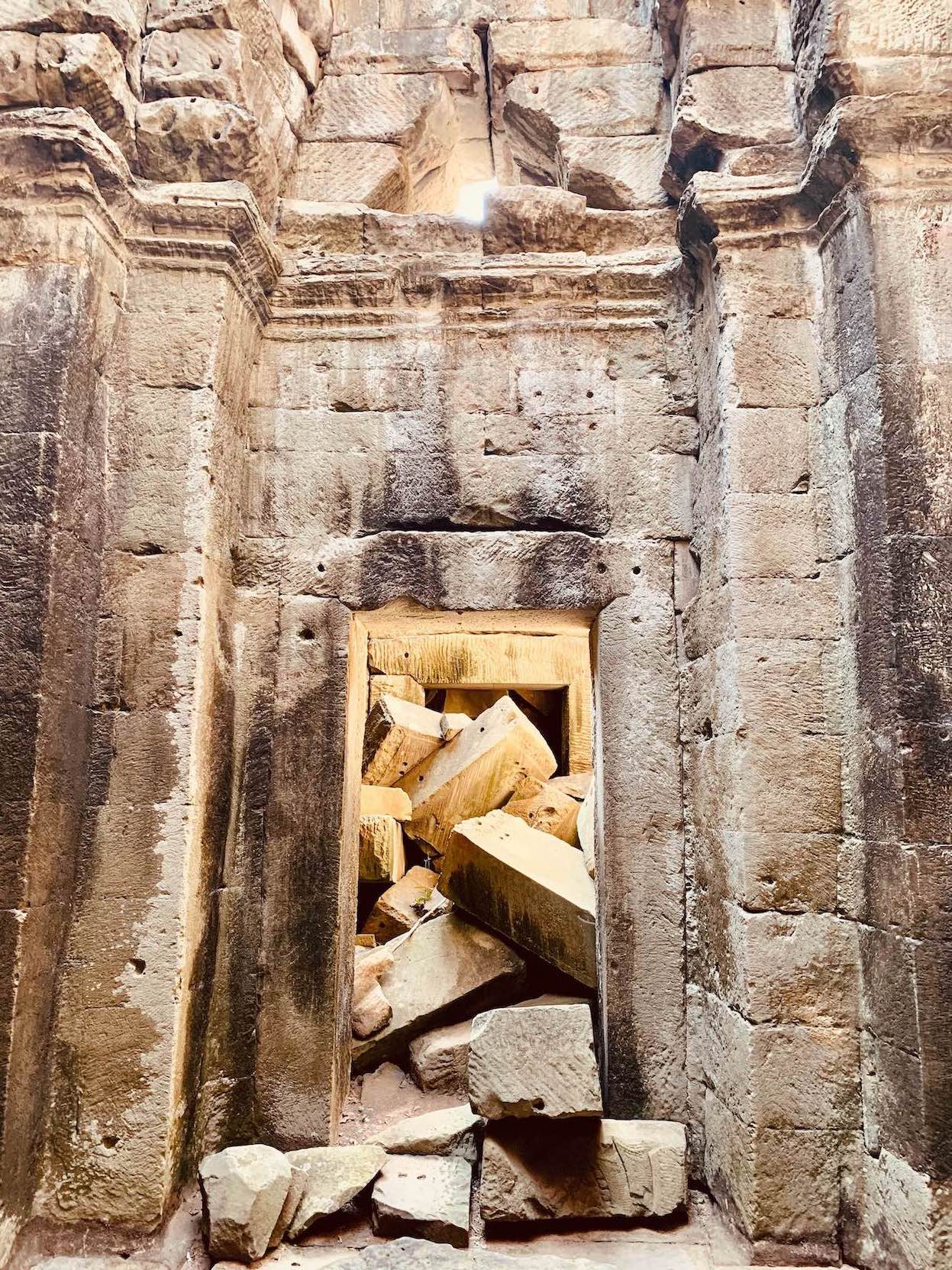 Even 21 year old me wouldn’t have gotten through this.

Less artistic… but just as fun, were the several doors to nowhere we came across. Completely blocked by stacked rocks, there was absolutely no getting through. 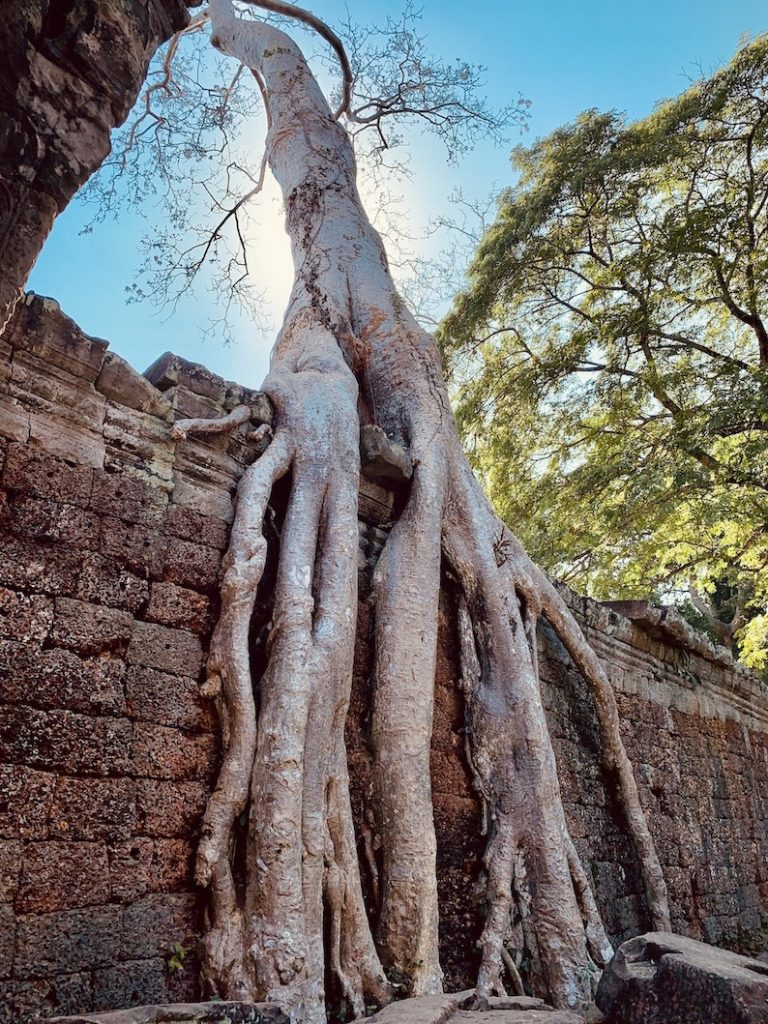 In Preah Khan’s cavernous outer enclosures, there are a number of breathtaking tangled trees. Reaching for the clouds, twisting and turning, monstrous of root; these trees are every bit as impressive as those at Ta Prohm. 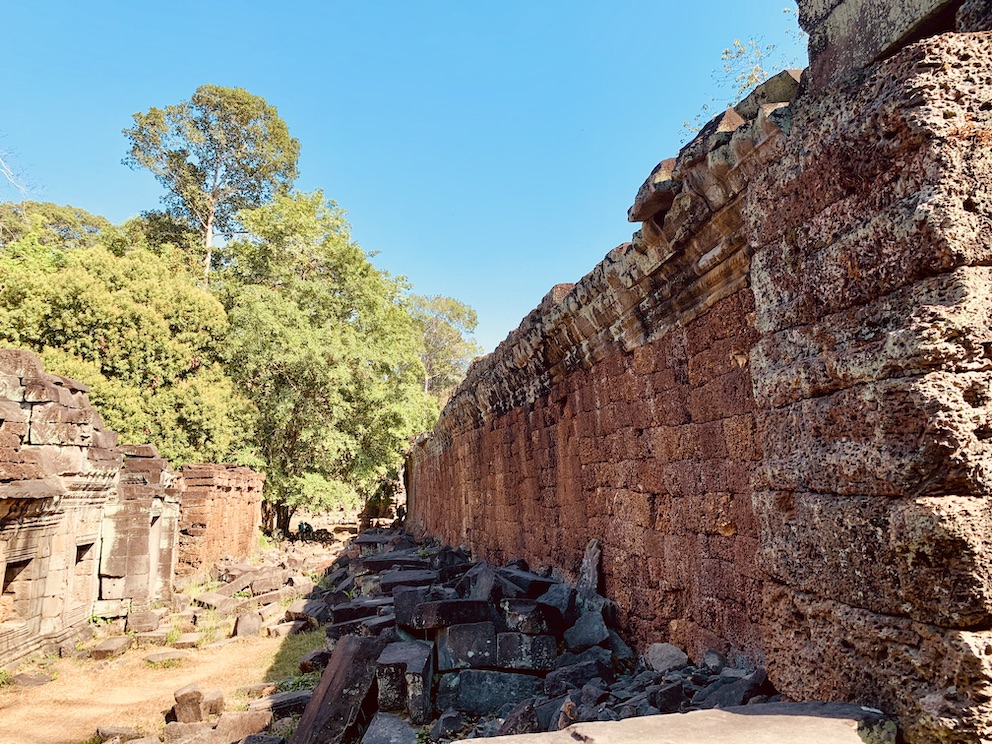 On our way out of Preah Khan that afternoon we finally got to see some of Angkor’s famous monkey population. There were over twenty of them chilling out on some ruins near the entrance to Angkor Thom. 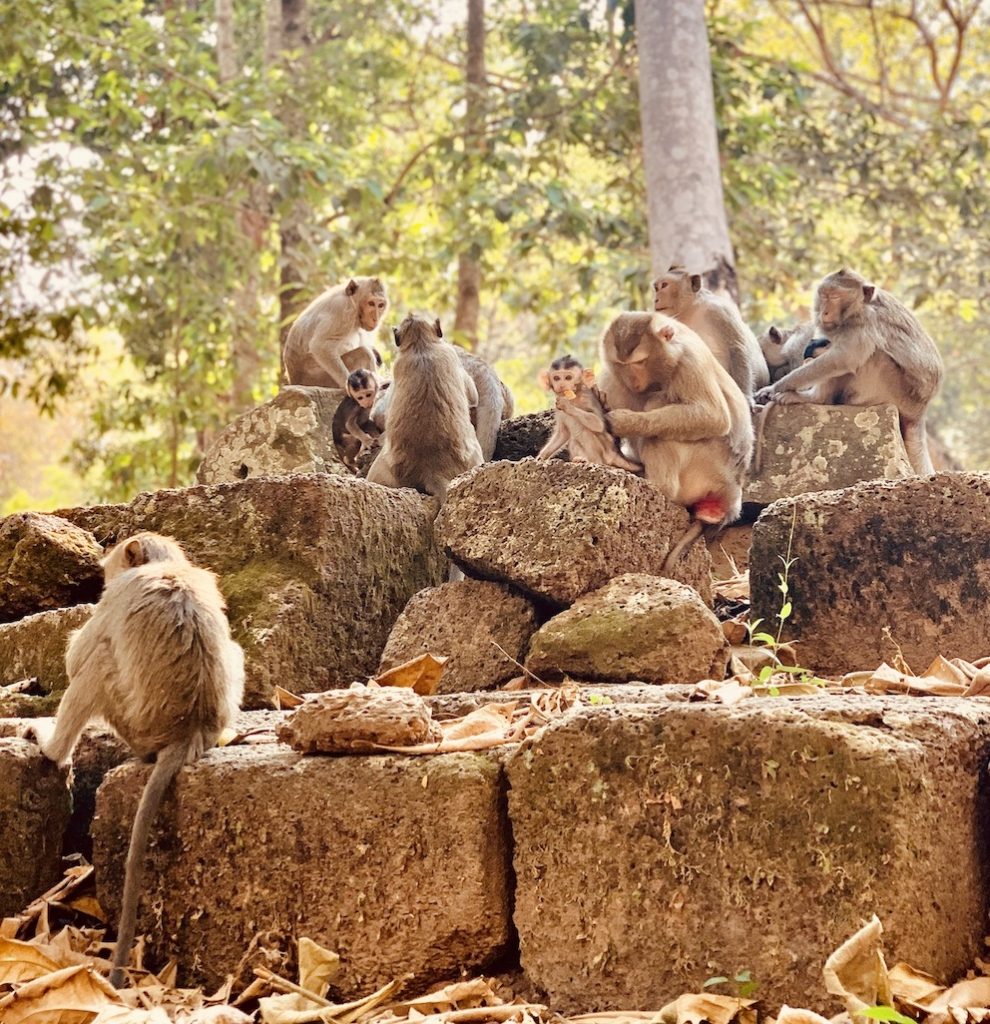 Despite the warning signs, a small crowd had gathered to throw fruit and take photographs. There was even a row of Khmer photographers setting up tripods from a distance. The monkeys gratefully accepted any food on offer, but didn’t seem particularly troublesome and mostly kept to themselves. A lovely end to another fantastic temple visit in Siem Reap. 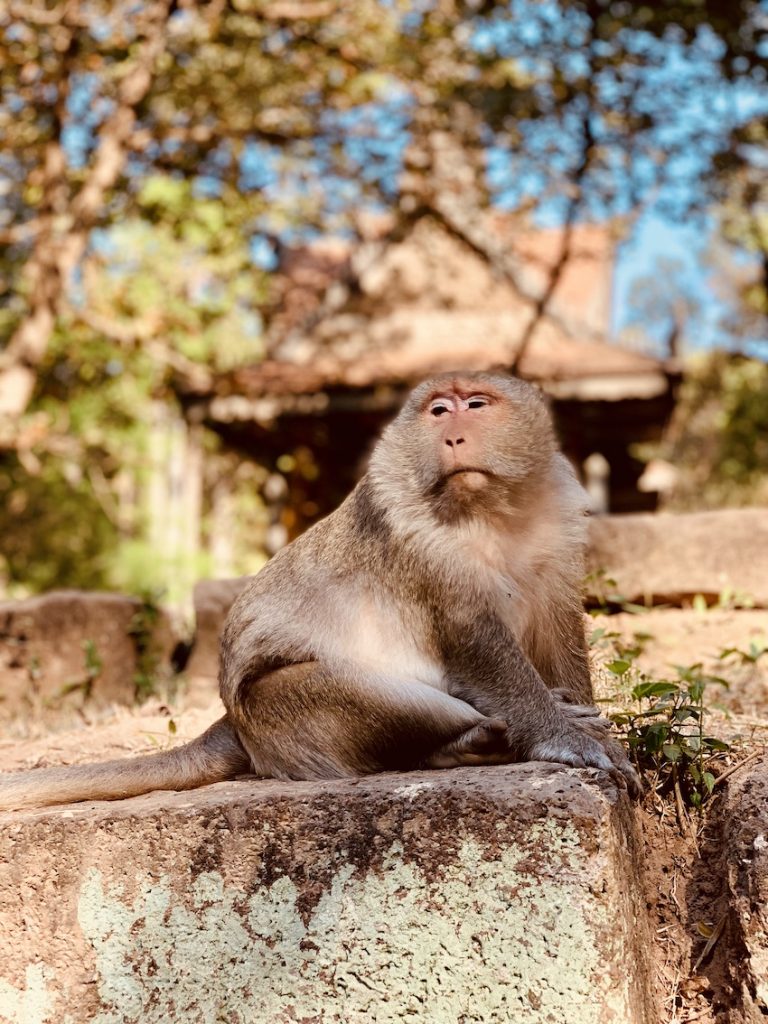 You can visit Preah Khan with The Angkor Pass, purchased both online and in person at The Angkor Archaeological Park Ticket office. 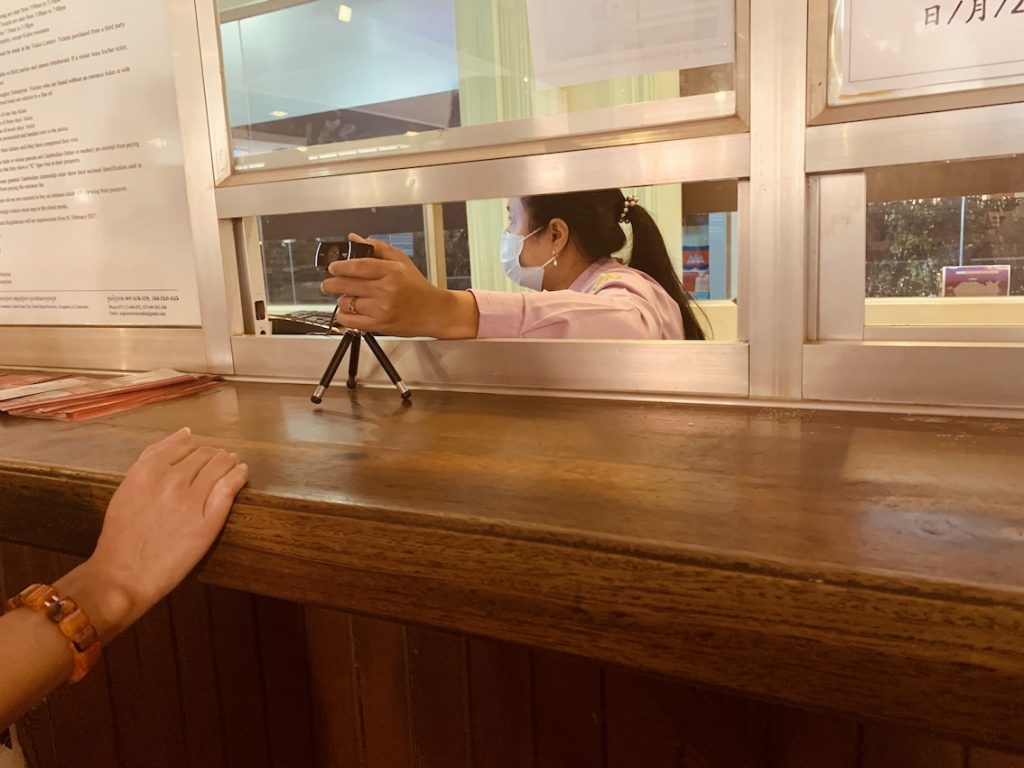