April 2020. Sladja and I had been largely self isolating for around a month when we began getting antsy. Don’t get me wrong, I was feeling beyond blessed to be stuck at a place as idyllic as Apsara Greenland Boutique.

Nevertheless, a solid thirty days of writing in the same room can get… claustrophobic… even in the best of circumstances. Desperate for a day escape, we decided the time was right to visit nearby Kulen National Park. 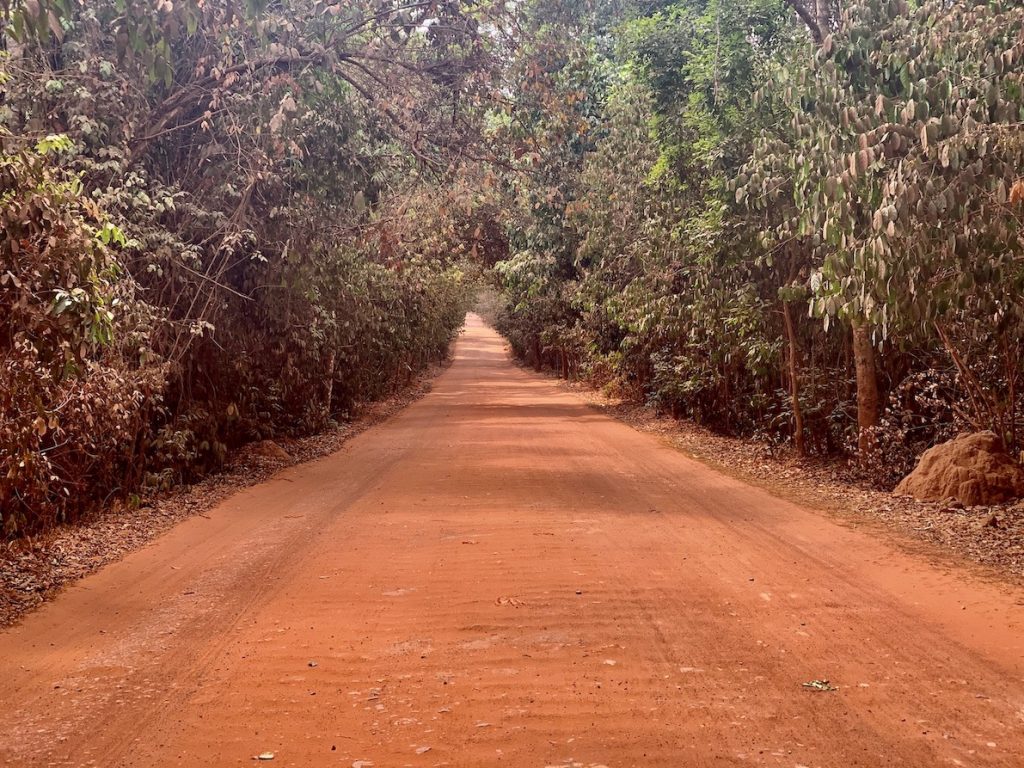 Hiring a private driver for the day, we set off early one morning for the ninety minute journey to Kulen. In addition to The Angkor Temples and the isolated ruins of Koh Ker, Kulen National Park is one of the most ancient and historical sights of Siem Reap.

Dating back to 802CE, before the rise of Angkor, Kulen was Cambodia’s capital city. Home to King Jayavarman II, it was a giant metropolis roughly the size of modern day Phnom Penh. Cited as The Birthplace of the Khmer Empire, a number of ancient sights lie scattered between the dense jungle trails of Cambodia’s most sacred mountain. 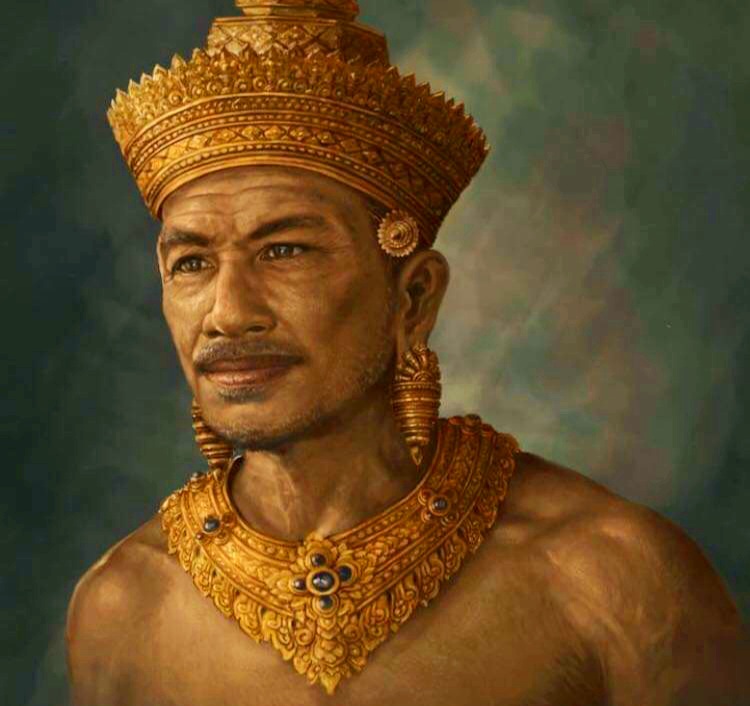 Photo of courtesy of Khmerloy9.

Arriving at the base of Kulen, our driver had to negotiate a series of twisting, dusty roads as we made our way toward’s the day’s first stop. 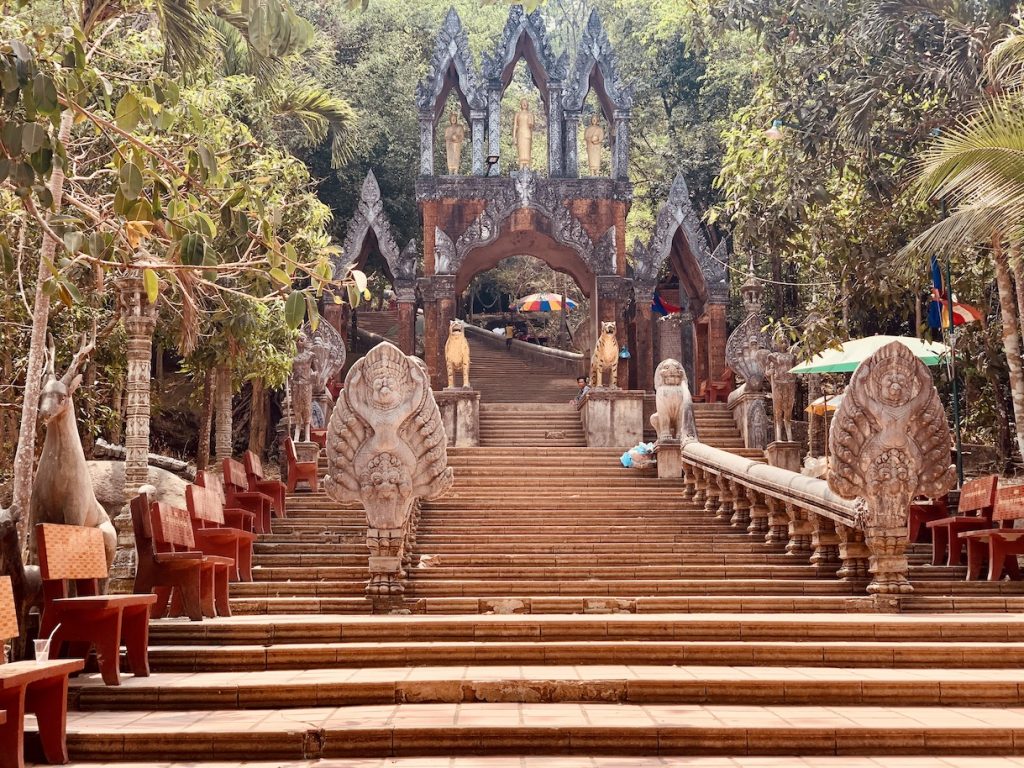 Preah Ang Thom Pagoda is a large Buddhist monastery dating back to the 16th century. Sadly, there’s very little historical info on the place. This certainly added to the overriding sense of mystery as we climbed its deserted staircase in the fierce morning sunshine. 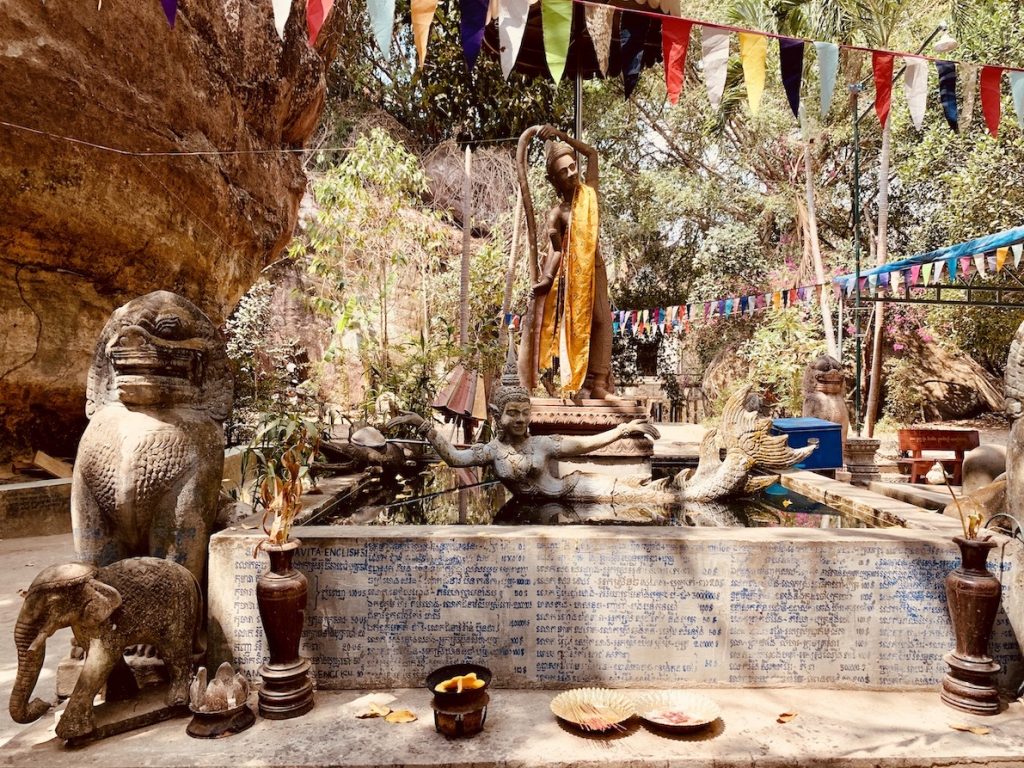 What we do know is that the pagoda is a place of worship dedicated to Preah Ang Thom, the sacred god of Kulen Mountain. 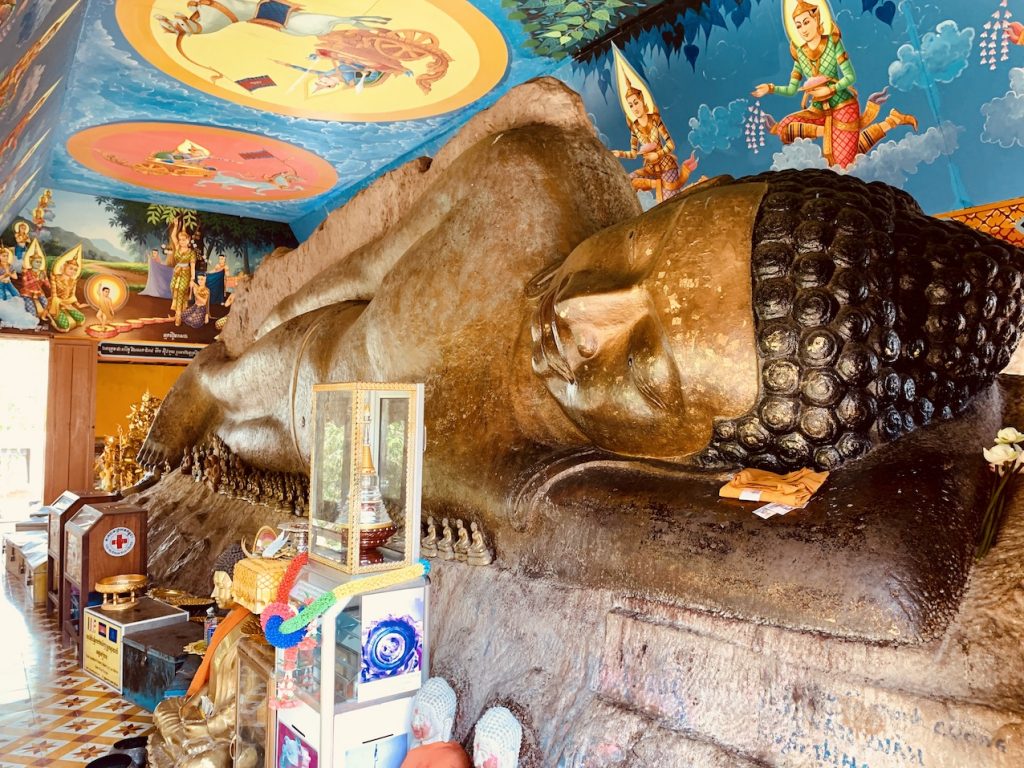 Its centrepiece is an impressive eight meter reclining Buddha, the largest such tribute in Cambodia. Amazingly, its creators carved the Buddha directly into the mountain’s sandstone formations. 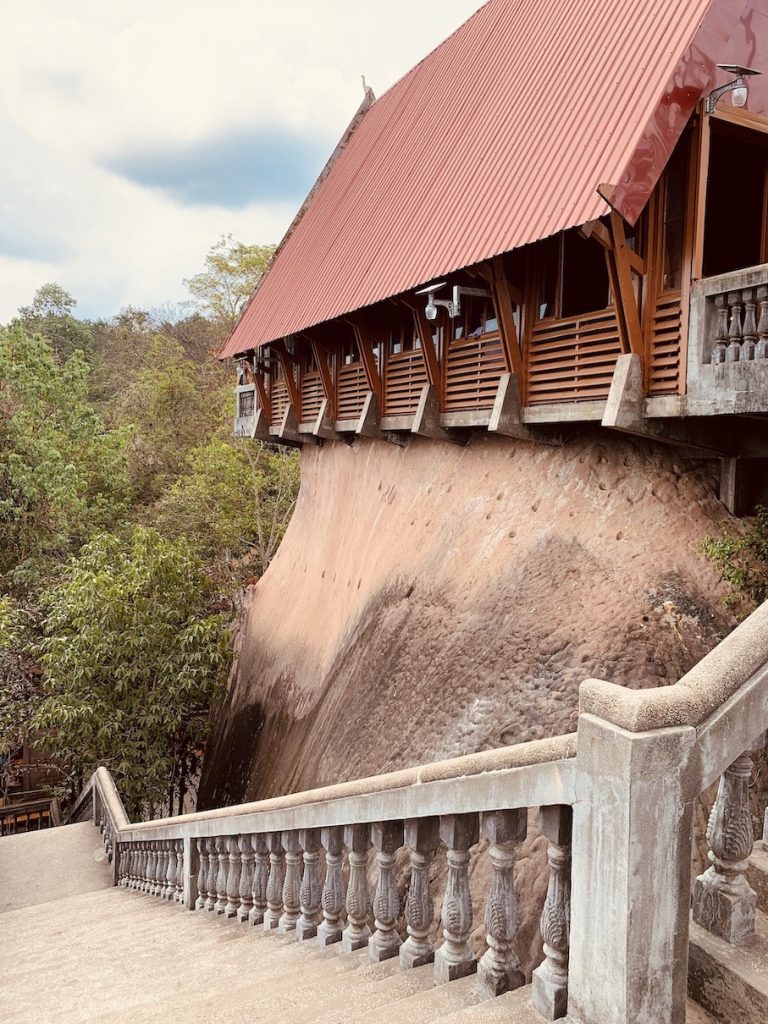 In order to protect it from the elements, local authorities built a wooden house around the Buddha. To enter, visitors take the steep staircase up to the house. On the day of our visit there was a warden keeping an eye on things, though he barely paid us any attention. 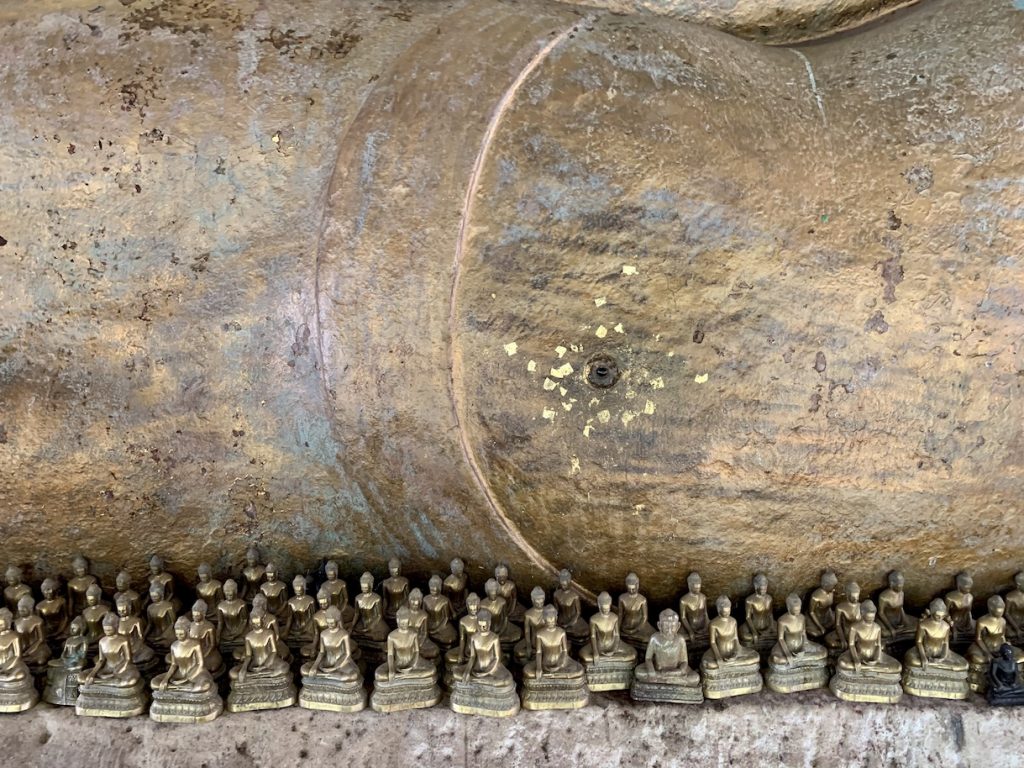 Hundreds of little Buddha figurines line the entire length of the reclining statue. Follow the walkway around to the giant’s back and you’ll find personal messages and wishes scribbled into the stone. Right behind a little sign that says Please don’t write on the Buddha. 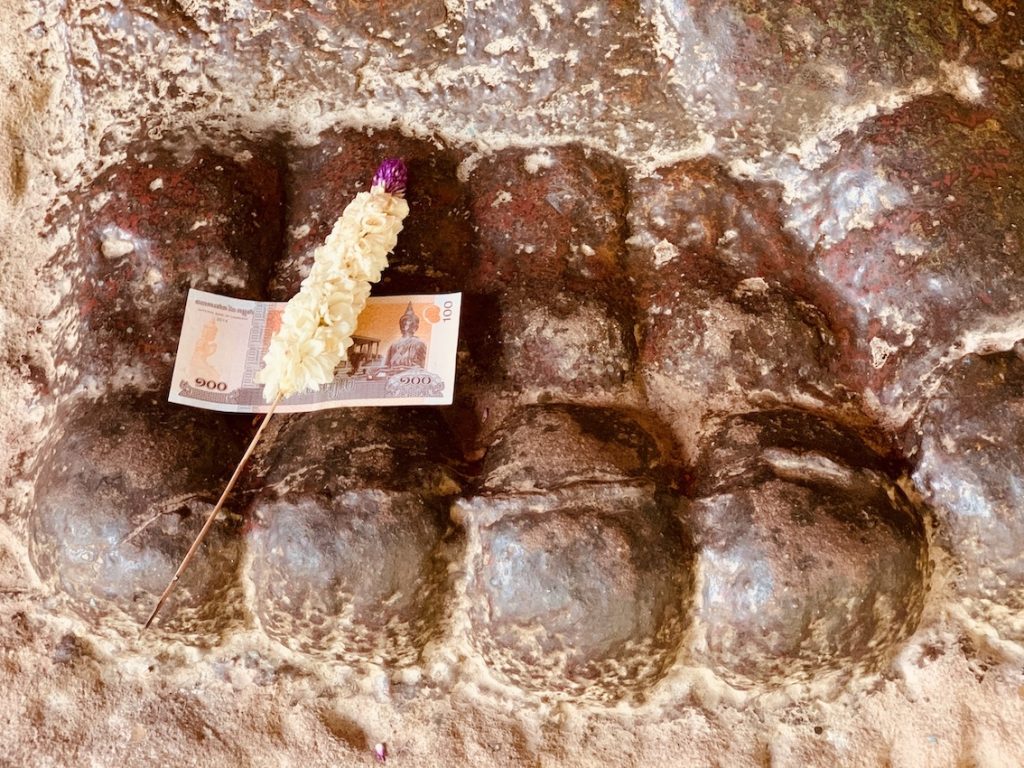 Here and there, people lay monetary and floral tributes to rest. As seen here on one of the Buddha’s giant feet.

There was a group of local musicians playing solemn traditional music in the pagoda that day. Not at all put off, it seemed, by the lack of an audience. Elsewhere, we saw a few glum market vendors, none of whom could be bothered laying the hard sell on us.

Moreover, we came across a number of beggars as we made our way back down. The pagoda virtually has its own village, the residents of which have seen their livelihoods wiped out during the Coronavirus crisis. Call me a sucker, but I felt a few dollars was the least I could give in exchange for a photograph. 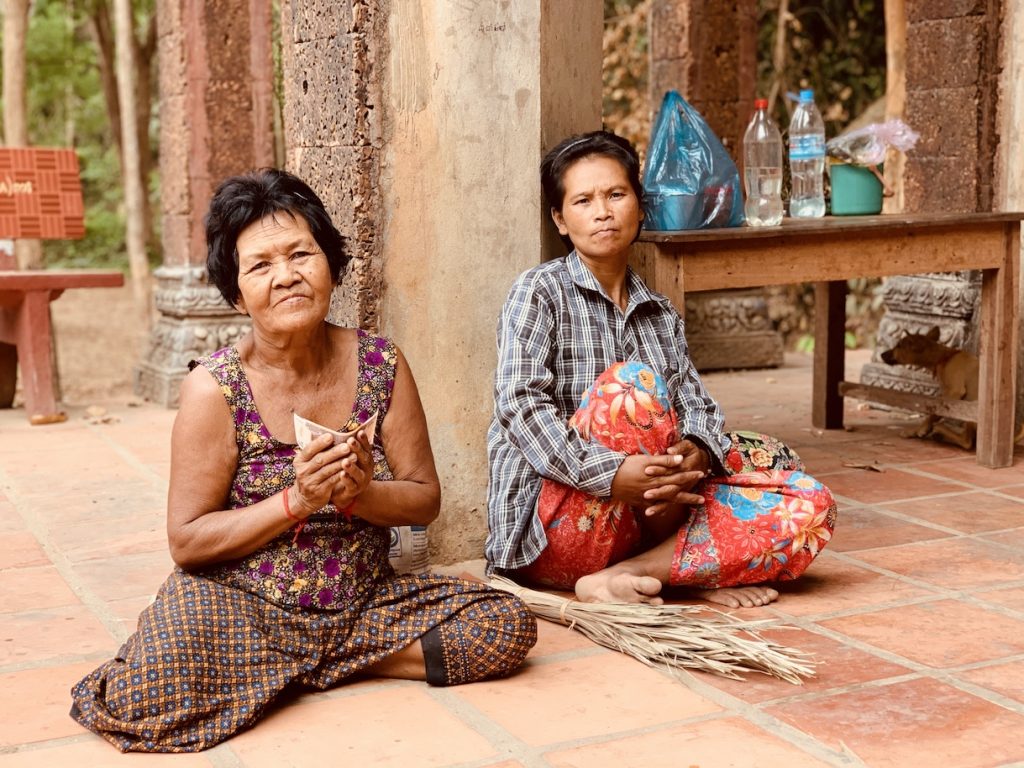 Hopping back into the minibus, our driver rumbled us off to the next stop, the highly impressive River of a Thousand Lingas. 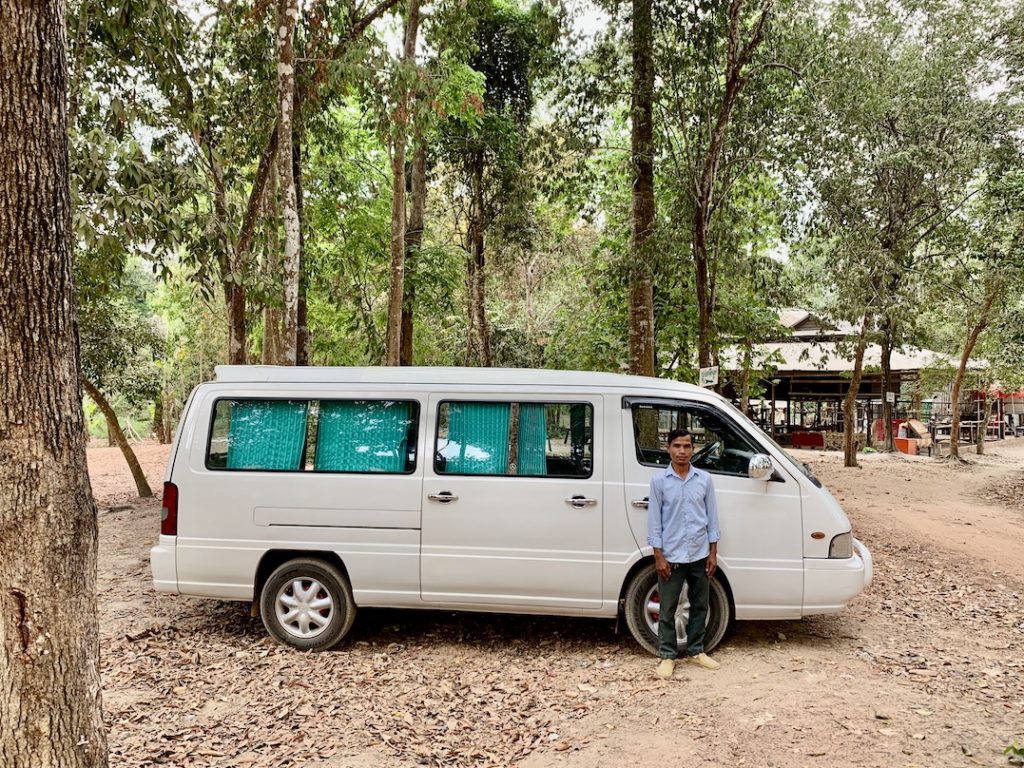 Our driver for the day.

The river features a number of ancient carvings cut into the stone, both along the banks and right into the bed itself. I’m not sure exactly how many carvings there are but hey, a thousand sounds like a good number.

River of a Thousand Lingas.

Many of the carvings here are lingas, the phallic symbol of the Hindu god Shiva. As representations of fertility, the monks who carved them believed their creations would give the water vitalising powers.

The lingas here appear as neatly stacked bumps, only just sticking out the surface of the water. Quite different from the taller, thicker and altogether more dramatic pieces we saw at The Linga Temples in Koh Ker. 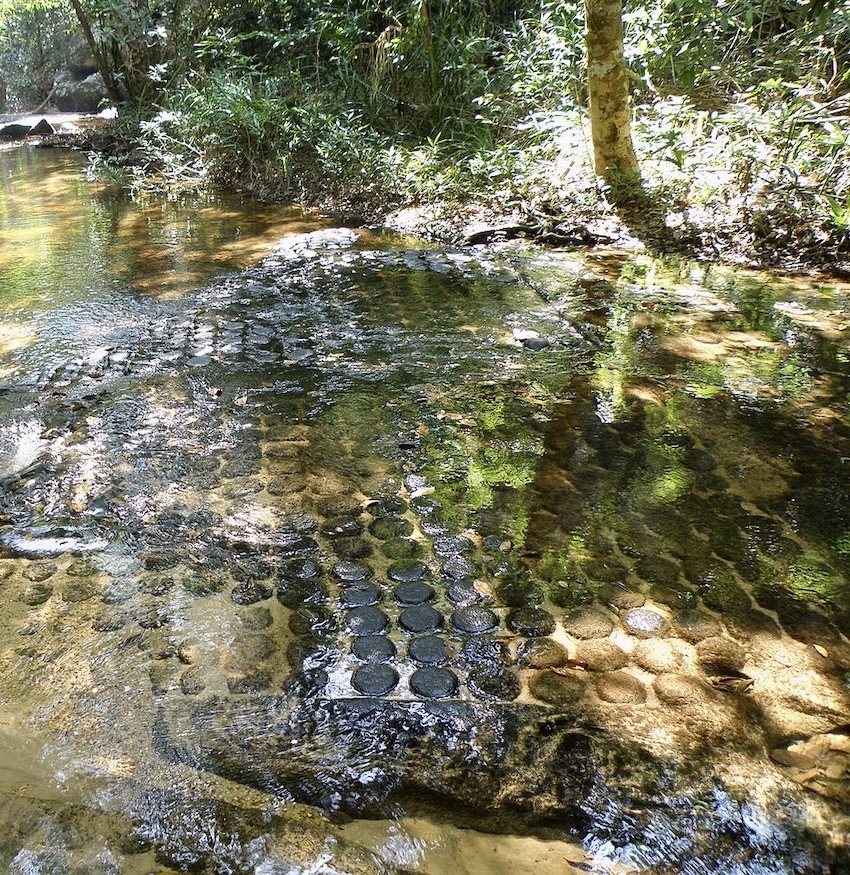 River of a Thousand Lingas.

Left to our own devices, Sladja and I took a stroll along the river following a peaceful forest trail. It was just us, the birds and a community of gorgeous butterflies fluttering between the branches. Occasionally right in front of our noses. 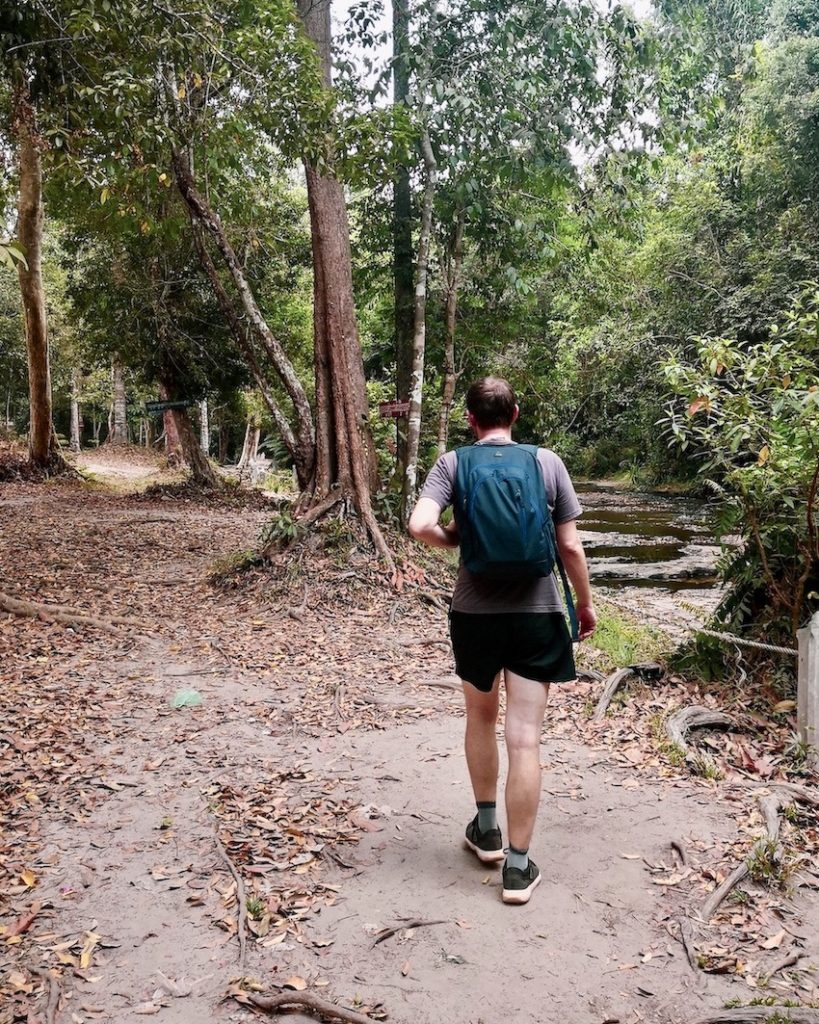 Someone had even been considerate enough to construct a little tree swing for us. In all honesty, we would have happily continued down that forest trail for hours. But we had the driver waiting and there were more sights to cover before our agreed mid-afternoon return to Siem Reap. 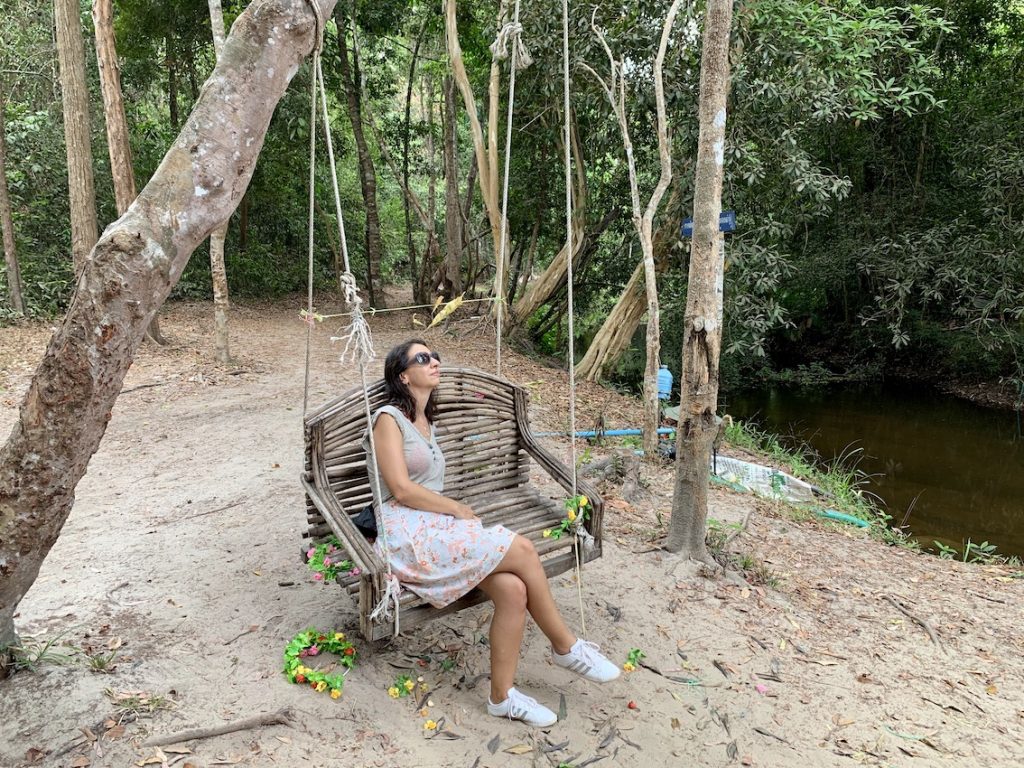 In addition to the beautiful forest, riverbed lingas and the country’s largest reclining Buddha, Kulen National Park is also famed for its life-giving waterfall. The driver dropped us off at the entrance to a small village built around the waterfall and urged us to head out and explore.

For the first time we found ourselves among sizeable gatherings of Khmer tourists. In fact, there were a number of families eating at several riverside restaurants and numerous snack vendors selling fried coconut and pineapple desserts. It felt weird to be back in civilisation again. 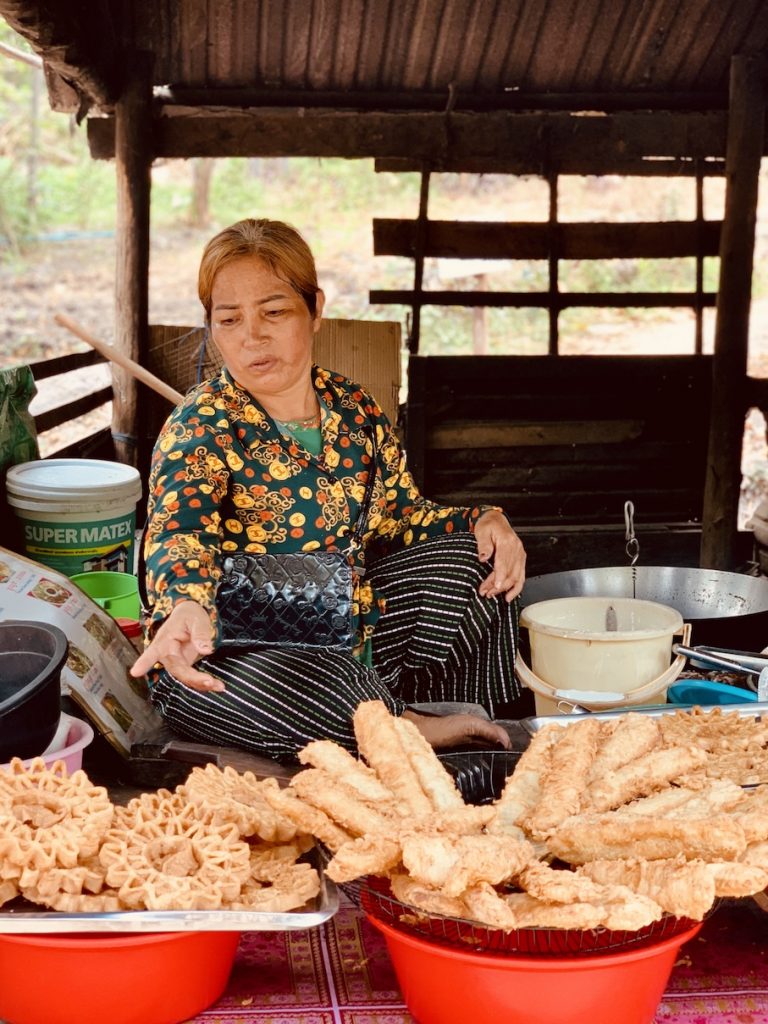 When we finally reached the waterfall, I was disappointed. Oh, that’s it. The thing was pretty enough, no doubt about it. But I’d been expecting something… grander.

Plus, there were raucous kids and selfie-taking couples crowding around the gushing water. Indeed, we had to patiently wait awhile to get a look.

Back at the bus, our driver was surprised to see us return so soon. “You see big waterfall?” Following a very confusing exchange, he led us back into the village, past the waterfall we’d seen and onto an inconsequential forest trail. There were no signs enlightening us as to which way to go, nor indeed what might lie ahead. 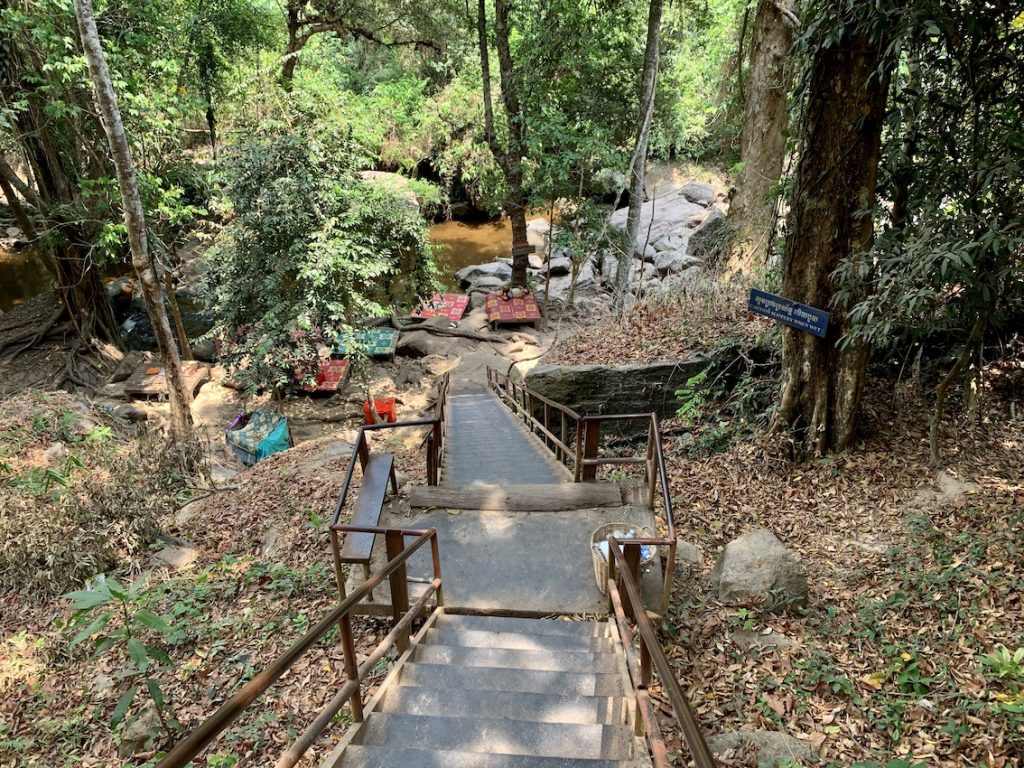 Soon enough the trail brought us to a descending staircase of stone steps and wooden handrails. We were about halfway down when the authoritative boom of the falls kicked in. Whoa, this waterfall must be big.

In terms of grandeur, Phnom Kulen Waterfall definitely delivered! Unfortunately, the wow moment of our arrival was undermined somewhat by one of the most moronic group of teenagers I’ve ever seen. Nonetheless, we bade our time and eventually they took their playfighting, littering, shit music and general screaming elsewhere.

The waterfall is a special place for Cambodian people. Many believe that these waters have potent powers able to help couples conceive. As a result, it’s not uncommon to happen upon a childbearing ritual carried out by so-called natural medicine doctors. Furthermore, movie buffs might be pleased to learn that the waterfall also pops up briefly in the movie Lara Croft: Tomb Raider. 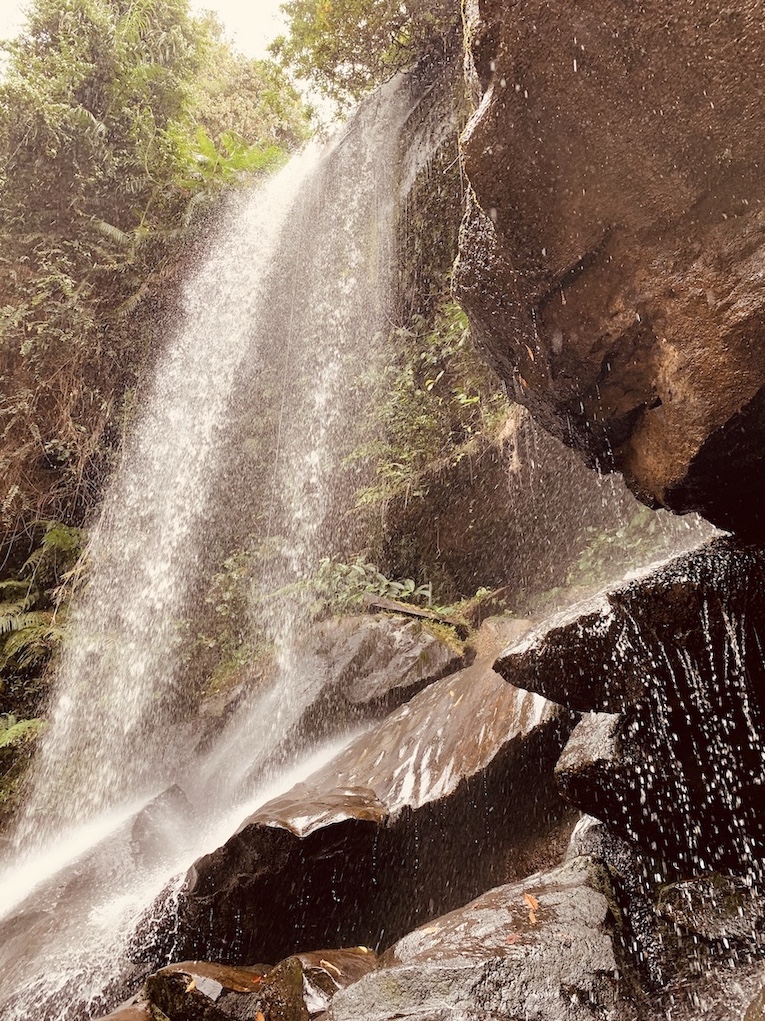 We really enjoyed our half day exploring Kulen National Park. Ok, we didn’t get to see everything, you’d need a full day for that. It was $50 for a private minibus to take us there and back, inclusive of ferrying us around the sights and waiting.

Entrance to the park is $20 per person. Naturally it’s cheaper if you drive yourself. Just bear in mind it’ll be hard work getting up the mountain and something of a challenge to navigate your way around the key spots.