May 2019. Three times I came to Cambridge over the years for day trips with the English language summer camp I worked at in Woodbridge, Suffolk. Three times I arrived with a busload of excitable Belgian teenagers. Thrice the camp director kindly offered me the choice of a) accompanying the rabble in their visit to King’s College, or b) retiring to The Eagle Pub for a long lunch.

Which one do you think I chose?

I’d often regretted not getting to see King’s College and its stupendous chapel. When I returned to Cambridge in May 2019 to catch up with my old mate Irish Mike, I knew this was the opportunity to finally make amends. 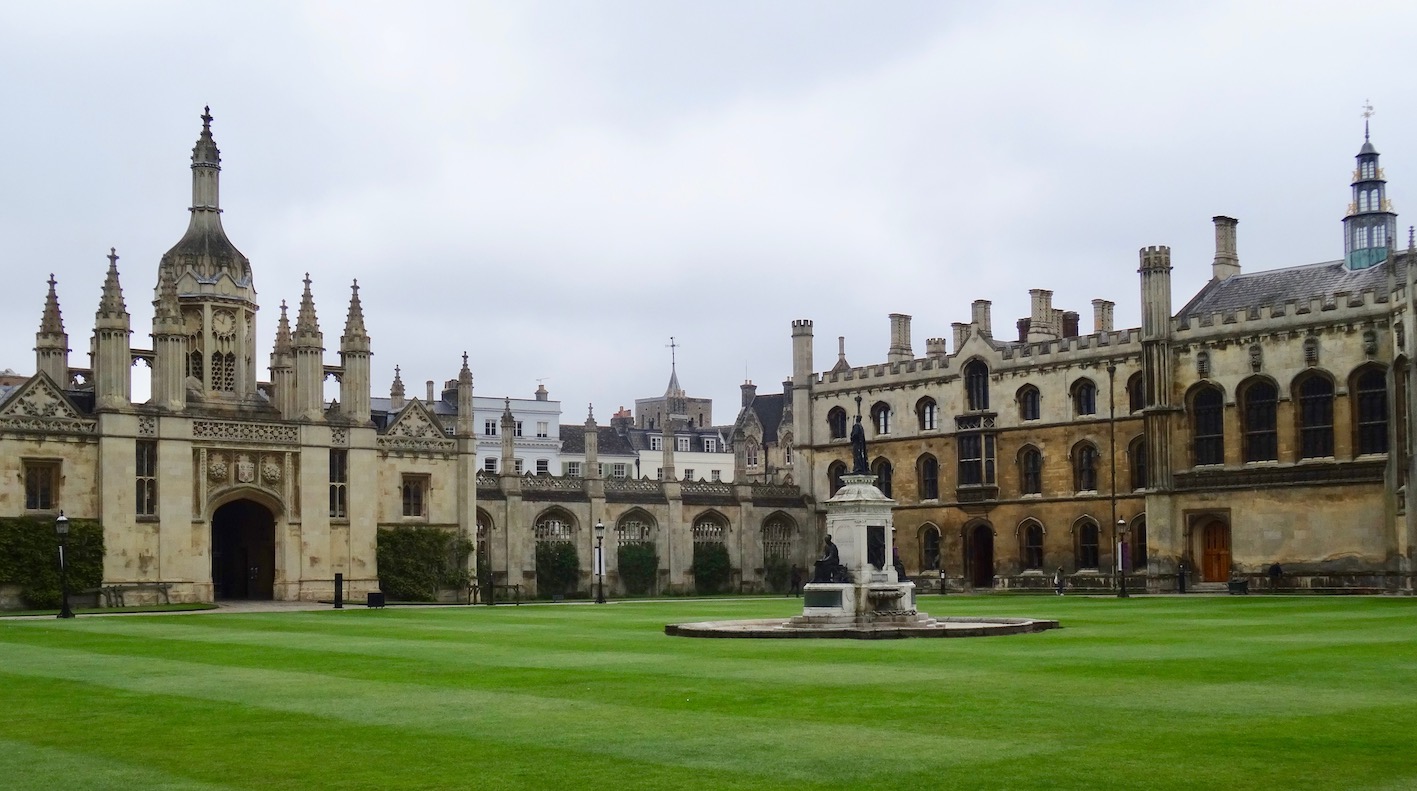 Founded in 1441 by Henry VI, King’s College is one of Cambridge University’s 31 city colleges. If you’re studying here, you’re probably quite the brainiac. You may even go on to do very special things. Bear in mind that past alumni include the iconic war poet Rupert Brooke and the godfather of macroeconomics, John Maynard Keynes. Moreover, the acclaimed novelists E.M. Forster and Salman Rushdie have passed through these halls, in addition to the comedian, author and inspired songwriter David Baddiel. 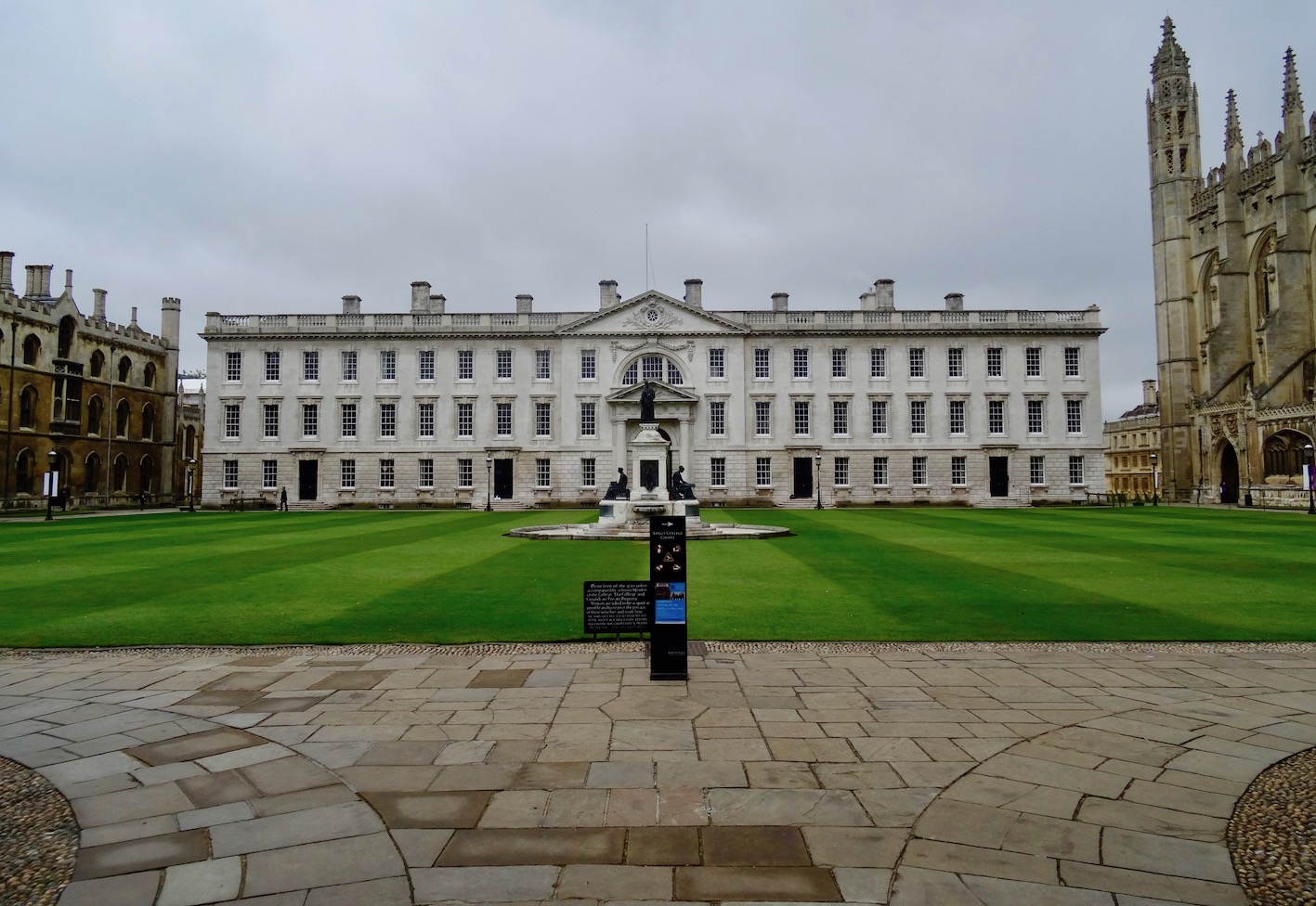 Entering the college through the main gate, Mike and I arrived in the front court with its dramatic backdrop of The Gibbs Building. This white Portland Stone structure dates back to 1724 and is the second oldest building at King’s.

The acclaimed ghost story writer MR James lived here during his King’s years in a room on H staircase. Today it’s home to fellows’ rooms, the Tutorial Office and the student computer room. The sign on the lawn states, in no uncertain terms, that the grass is out of bounds. Unless you happen to be accompanied by a senior college member. 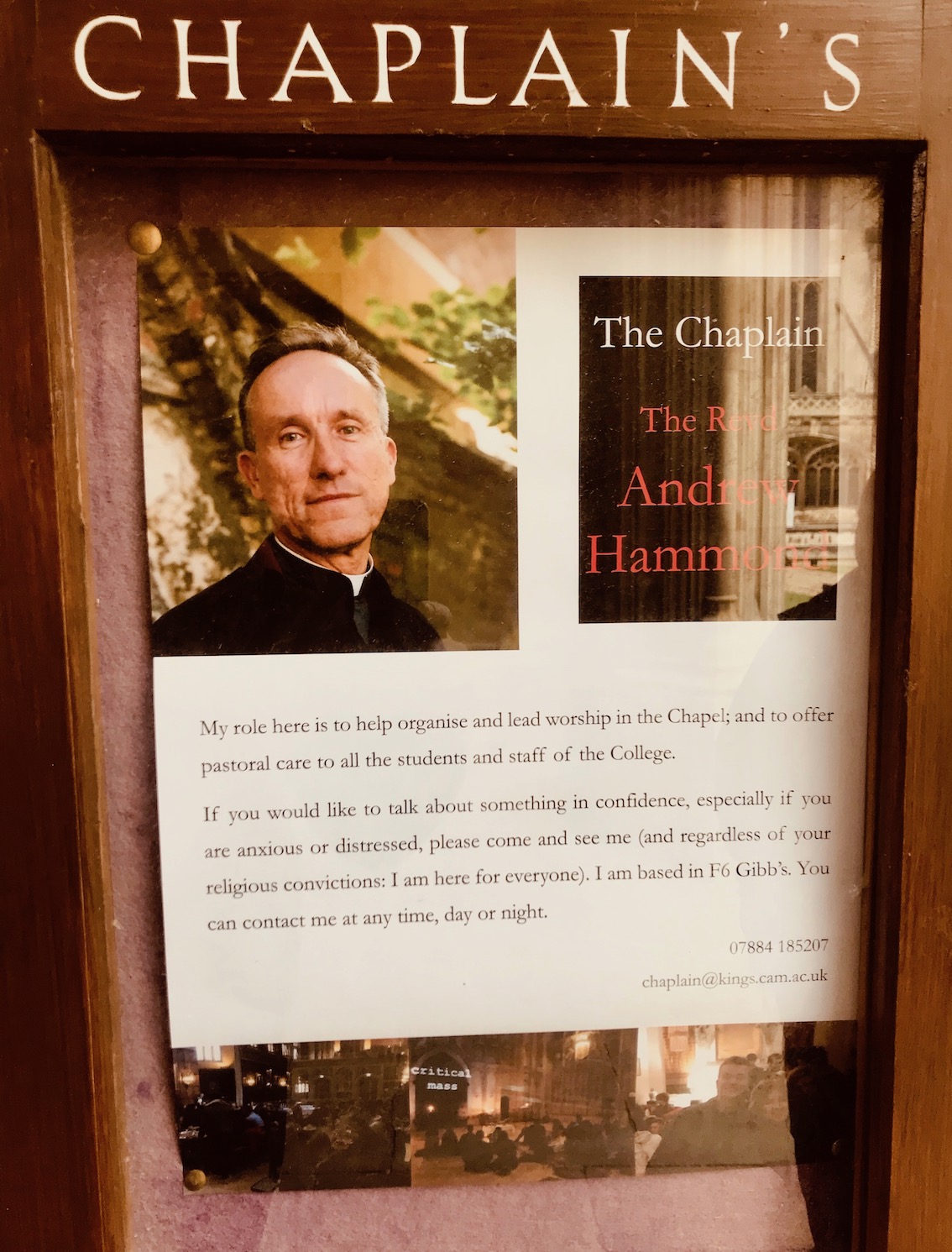 Reverend Andrew Hammond, the chaplain at King’s College Chapel, has his office in The Gibbs building. He’s an approachable chap, says this sign in the principal archway. Regardless of religious persuasion, Reverend Hammond urges all students at the college to seek him out if they find themselves in distress or in need of counsel.

Mike and I were reading the sign’s little blurb when the man himself walked right past us. “Oh look, that’s me!” he quipped, nodding towards the sign. Thus we ended up having a brief chat and yes, he seems like a lovely man. 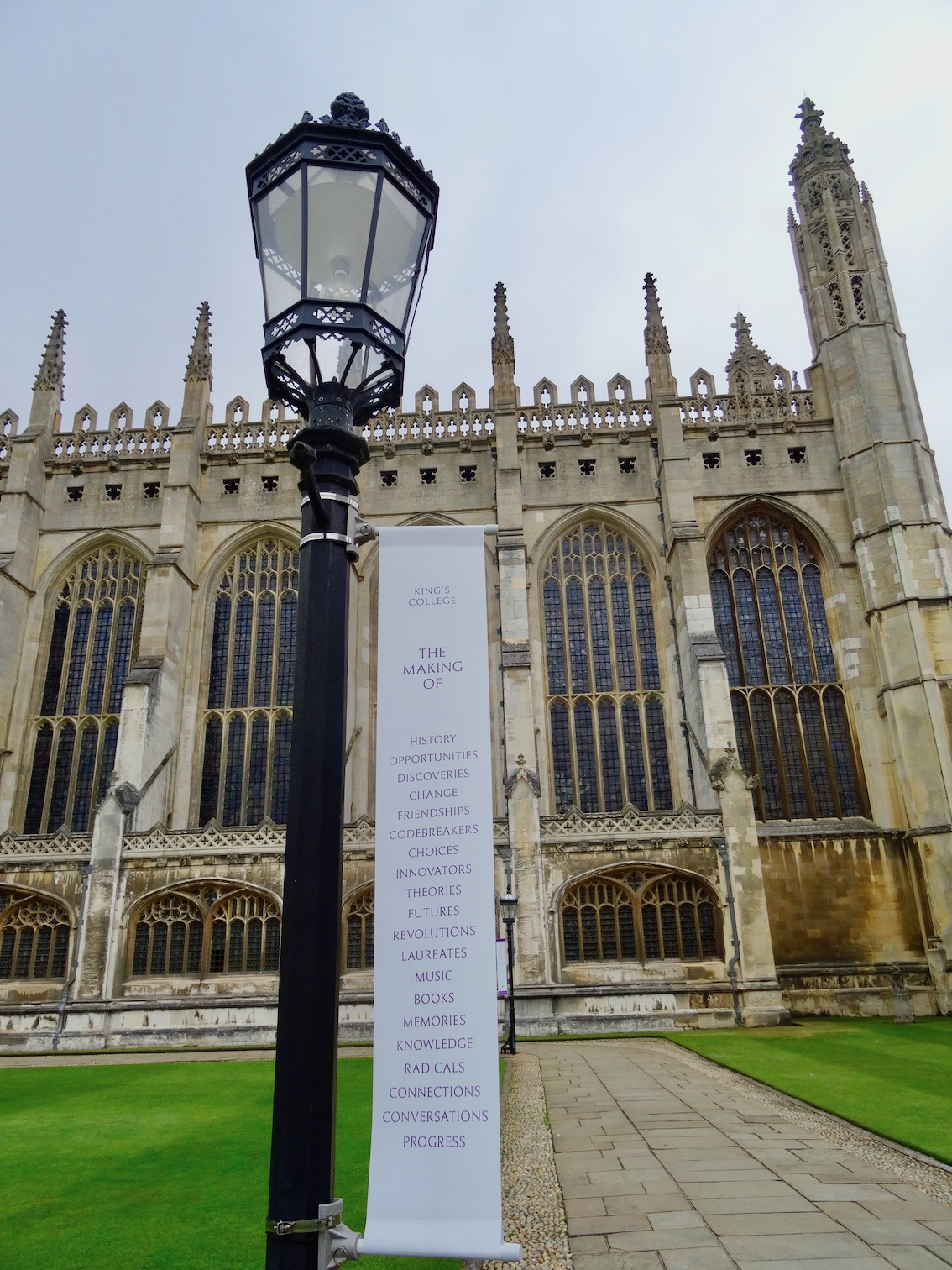 Don’t expect to see much of the actual college. After all, this is an operational residence and centre of study. You know, people have stuff to do and need their privacy. Special pre-booked tours are possible to get behind the scenes, but I suspect this has become even harder since the outbreak of COVID-19. 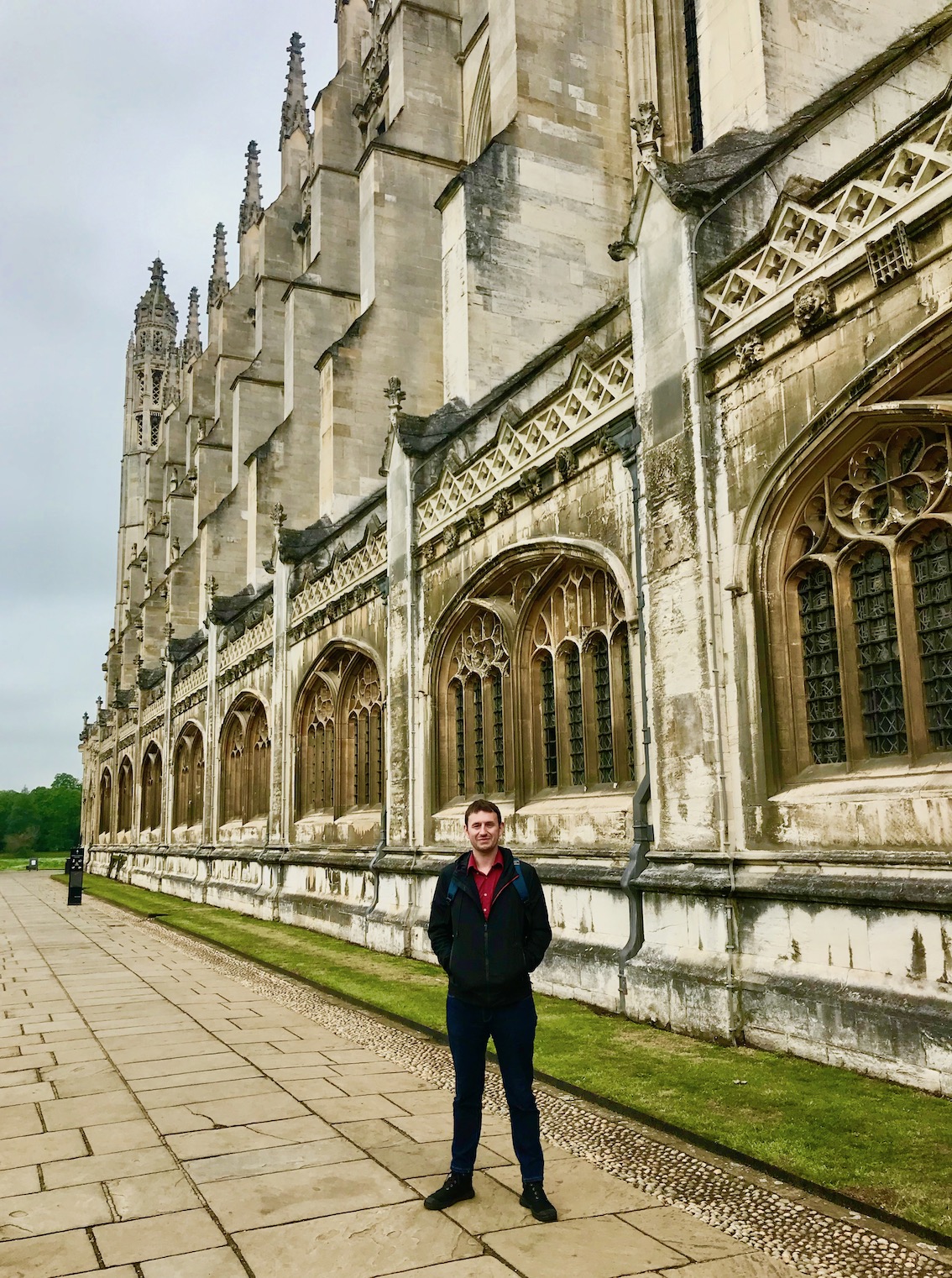 If you visit here on a general admission ticket, as we did, think of your experience as a taste of college life. Indeed Mike and I enjoyed our brief walk around the front court as we made our way to the main sight, King’s College Chapel. 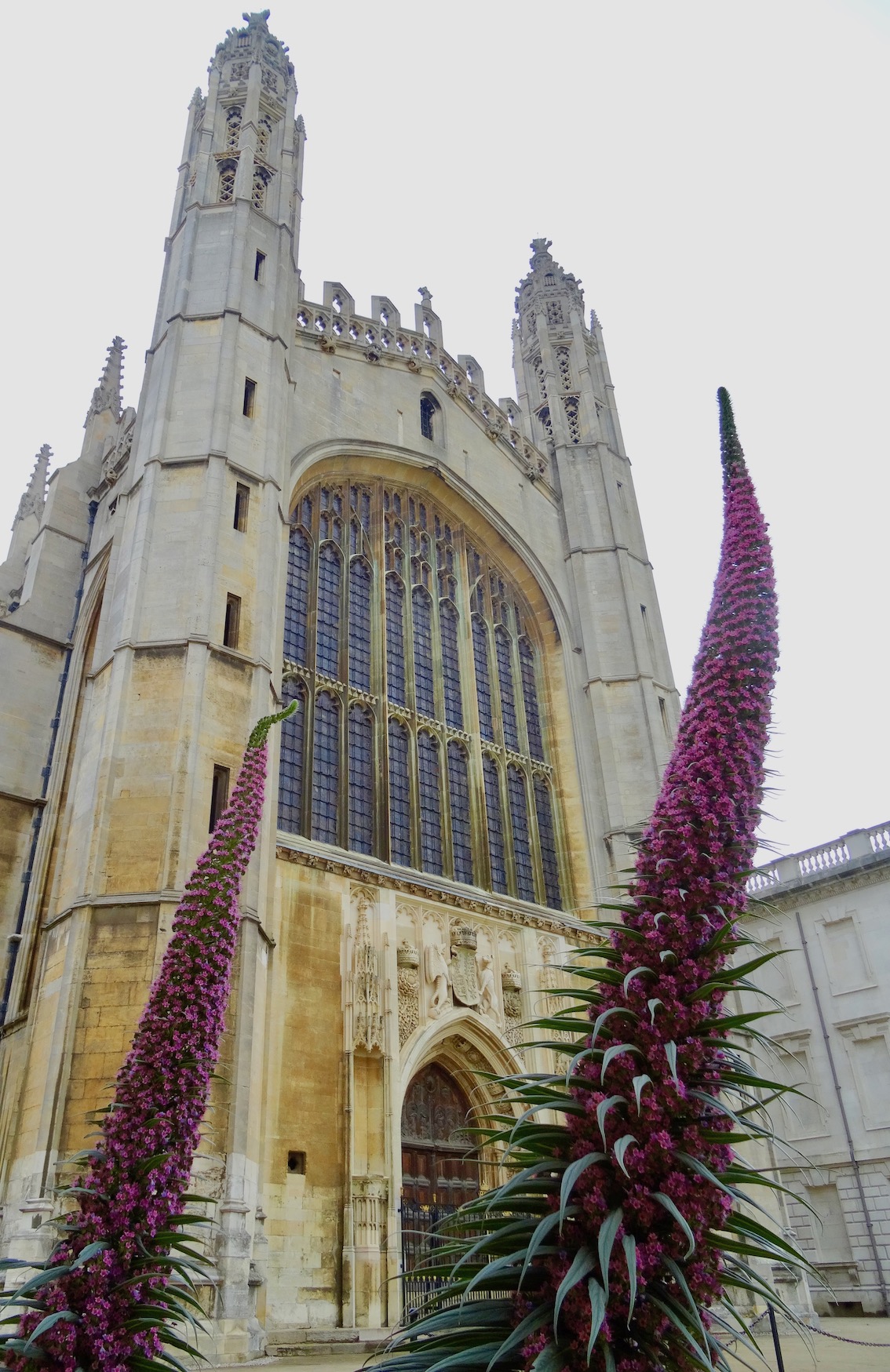 The chapel certainly is a sight to behold, a gothic beast of a building that took over a century to build. Construction began by order of Britain’s nineteen year old king Henry VI in 1446, just five years after the opening of the college. In fact, young Henry was the one to lay down its first stone during The Feast of St. James. 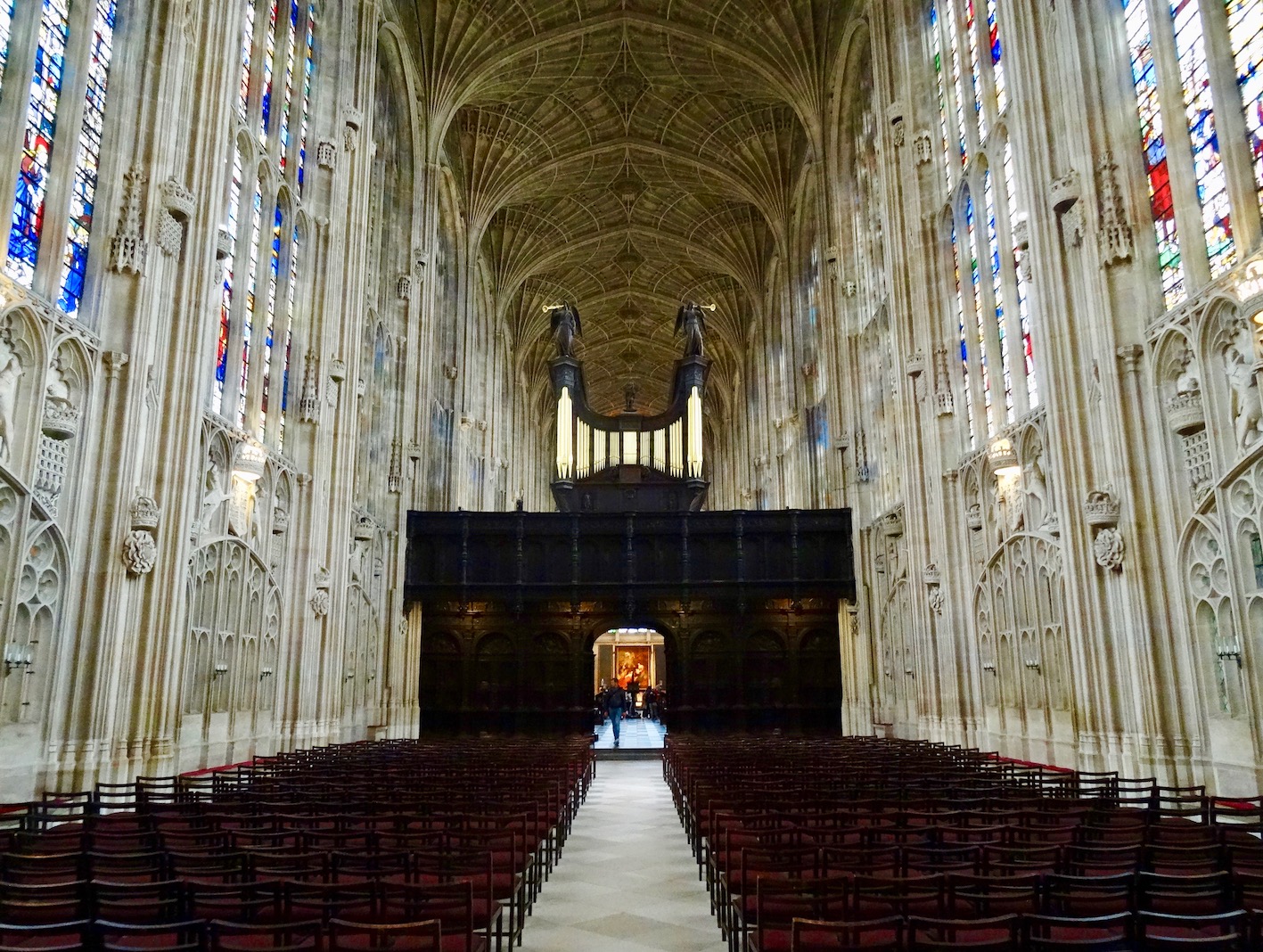 After my unforgettable experience at London’s Westminster Abbey, I’d been wondering if King’s College Chapel might disappoint. Needles to say that wasn’t the case. In contrast, it was impossible not catch my breath as we entered. I found my eyes instinctively gazing up eighty feet to the ridiculous fan vaulted ceiling. It’s the largest such fan vault in the world, added over an agonising three years by master mason John Wastell.

By this time subsequent monarchs King Richard III and Henry VIII had all played a part in the chapel’s construction. Henry VI was still involved too, pumping more money in and making visits as an advisor. 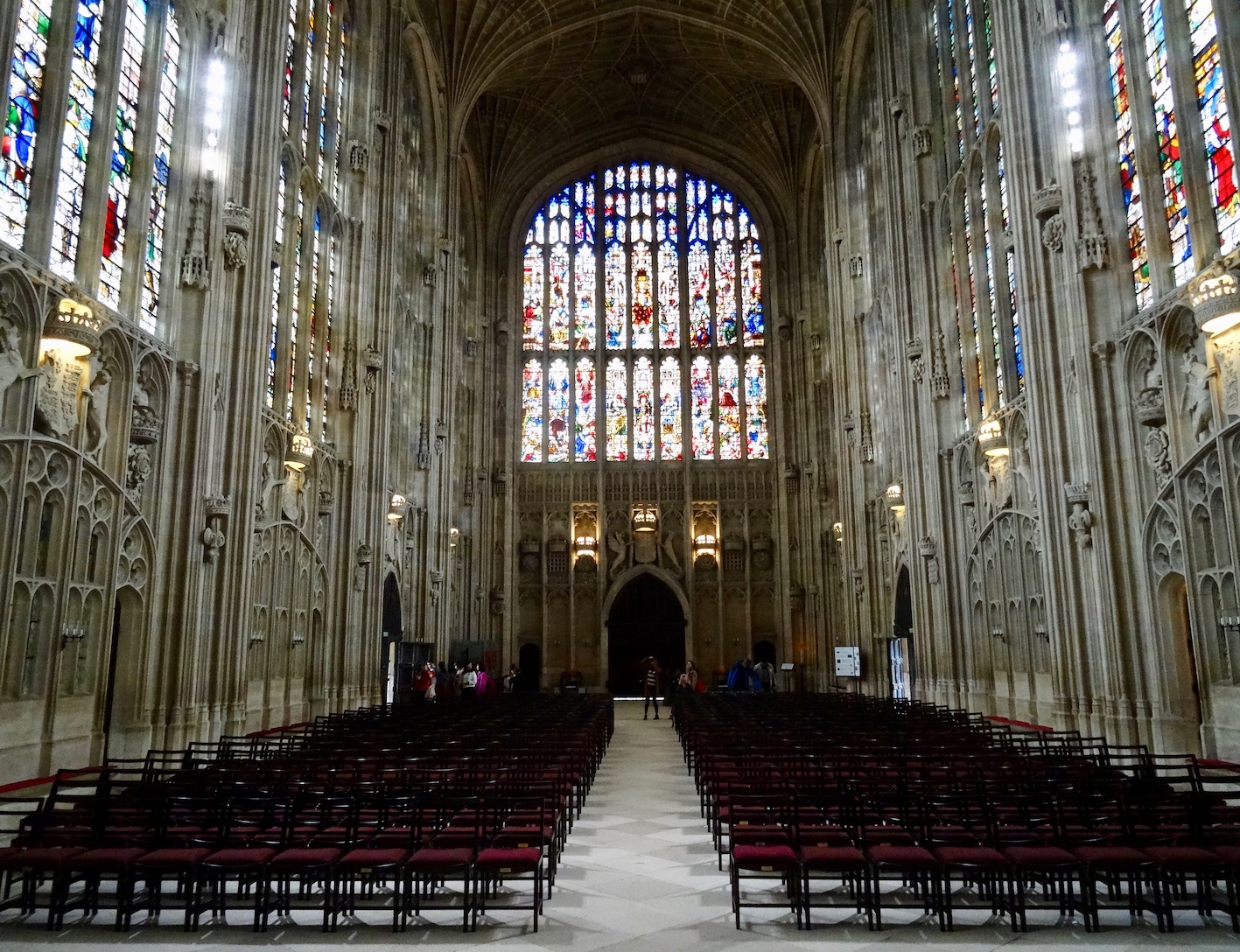 Equally impressive are the chapel’s Great Windows. There are 12 on each side and a single giant panel at the building’s eastern (pictured above) and western ends. They were created by a group of famous Flemish glaziers, led by the brilliantly named Barnard Flower.

Adoration of the Magi. 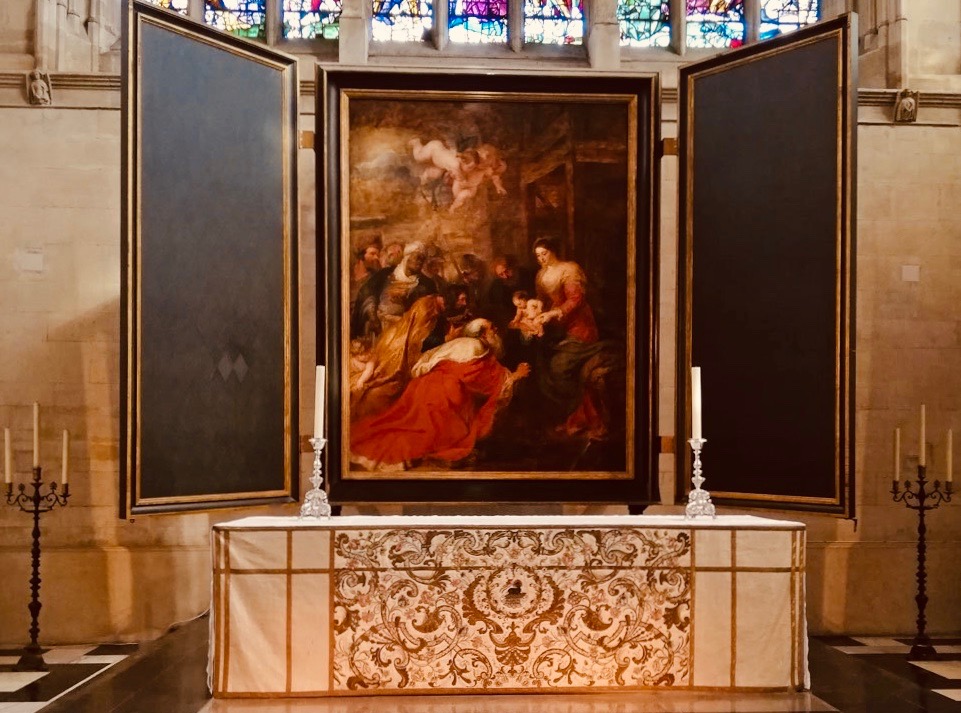 Adoration of the Magi by Rubens.

At the chapel’s western end you’ll find this incredible painting, The Adoration of the Magi by Rubens. Painted in 1634 for a nunnery in the Belgian city of Leuven, this masterpiece is worth around five million dollars! The British businessman and philanthropist Alfred Ernest Allnatt donated the painting to the chapel. 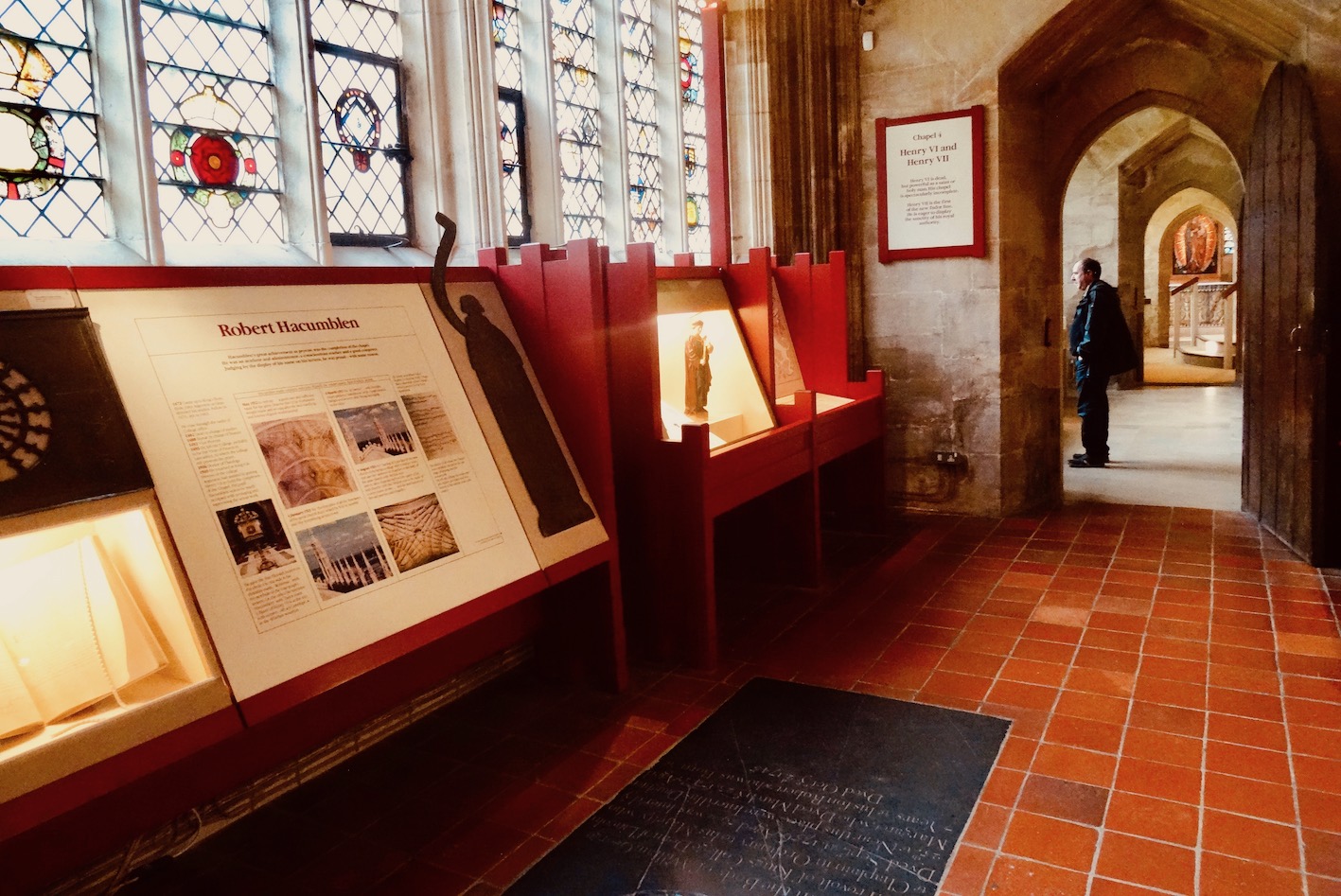 There’s a meticulous exhibition on the construction of the great building that runs through the connecting side chapels. If you’re a real history nerd, then every little detail you could possibly want to know lies herein. 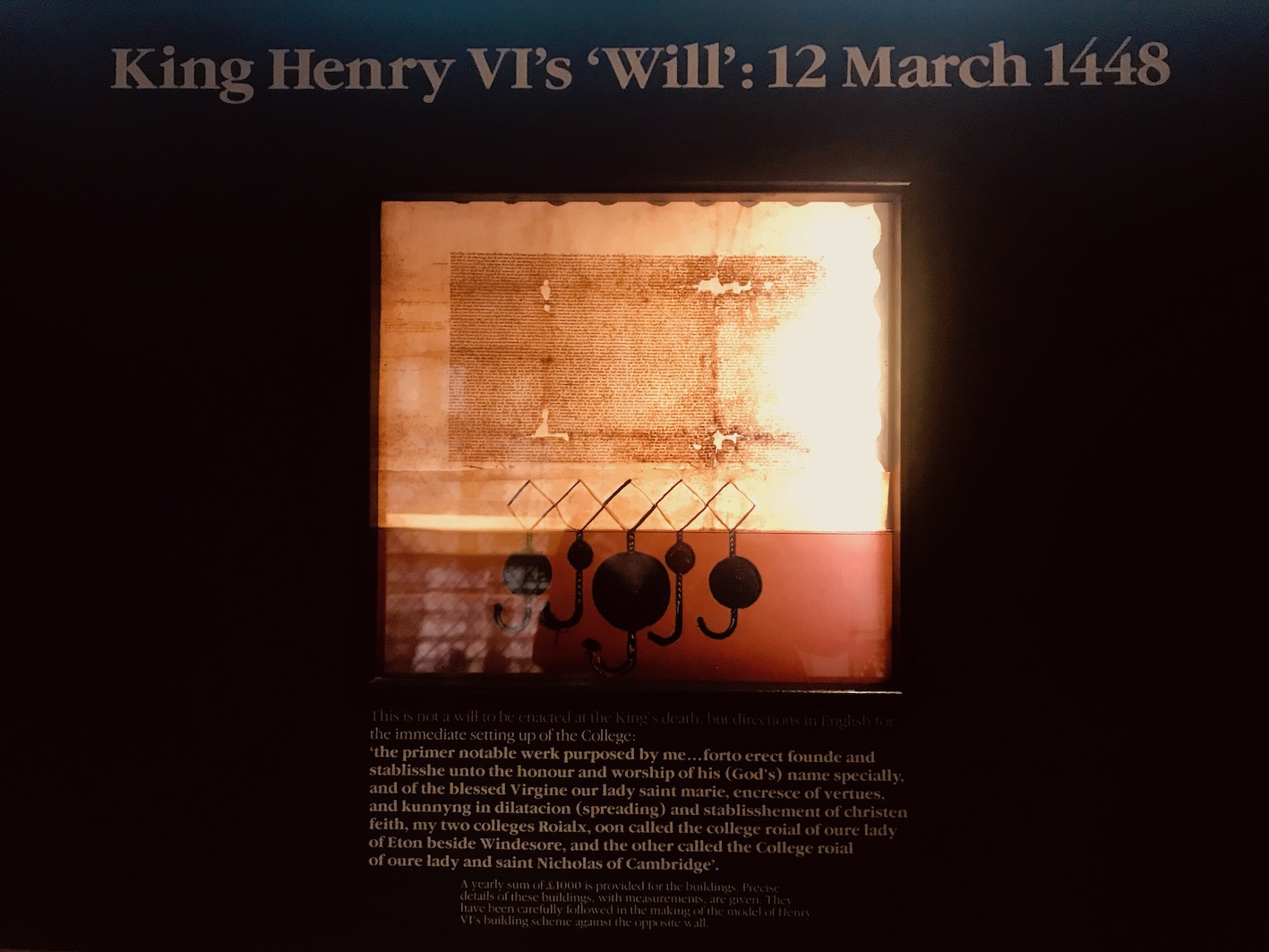 The exhibition includes some truly impressive artefacts. Such as King Henry VI’s original will, in which he gives precise details of how much money he wanted to leave for the college and chapel. 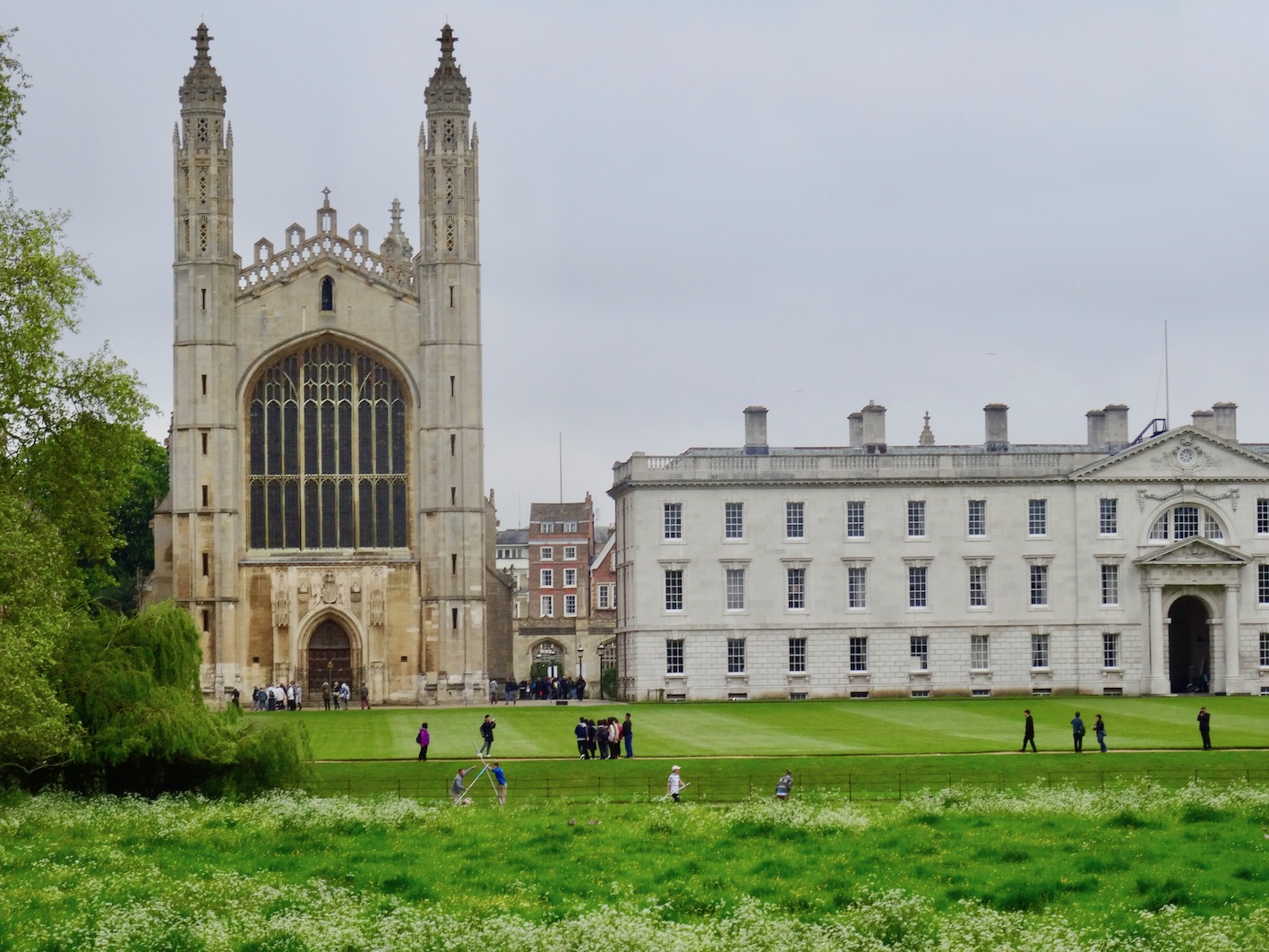 King’s College Chapel from The Backs.

Having exited King’s College Chapel into a horribly grey afternoon, Mike and I took a stroll around the back lawn for a view from The Backs by the River Cam. 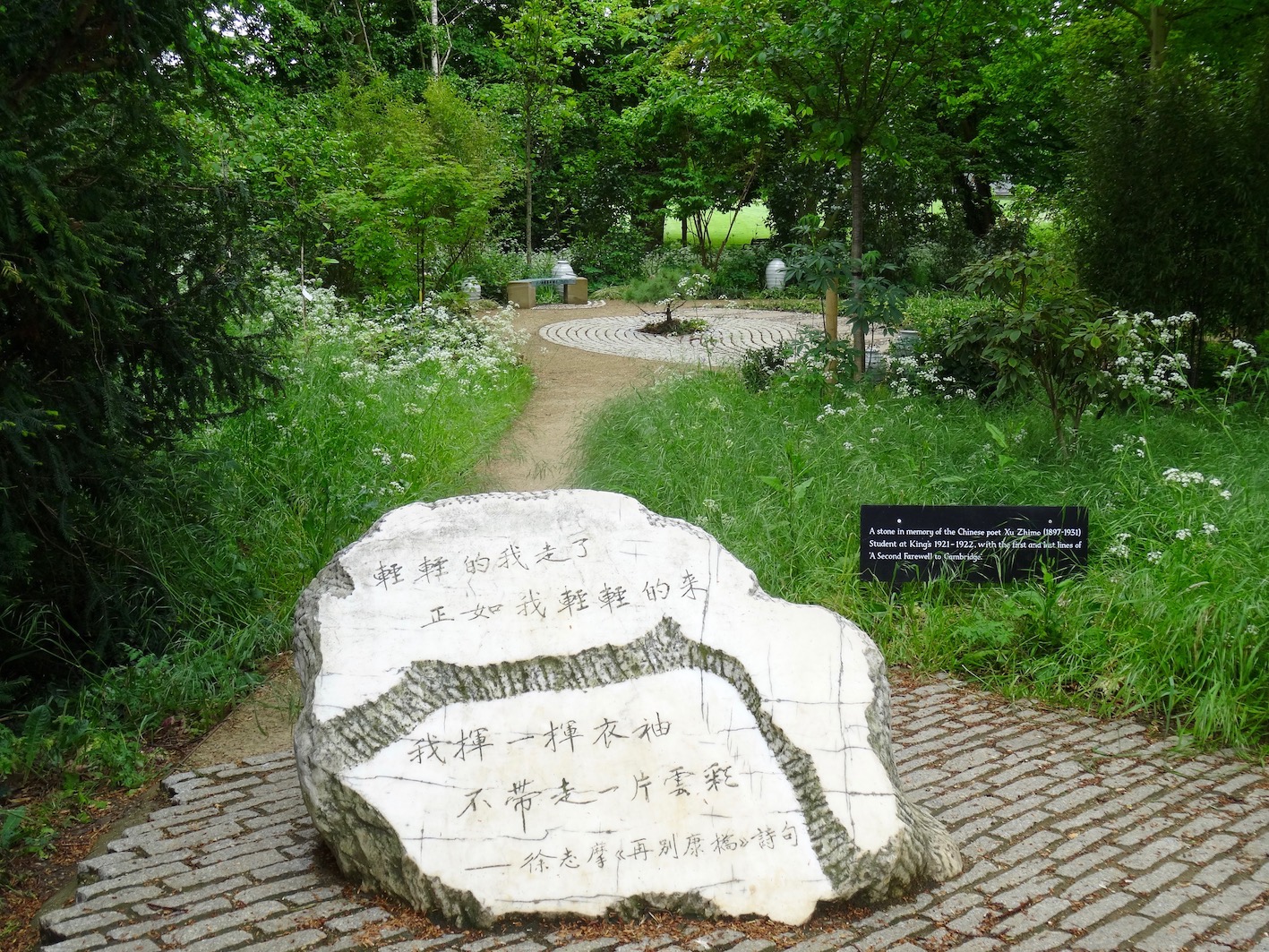 It’s here that you’ll find a peaceful memorial garden dedicated to the Chinese poet Xu Zhimo. He studied economics and politics here in the 1920s, during which he fell in with a crowd of writers. Inspired by the great British poets Keats and Shelly, Zhimo began writing works of his own. Eventually, he produced his masterpiece, Second Farewell to Cambridge. 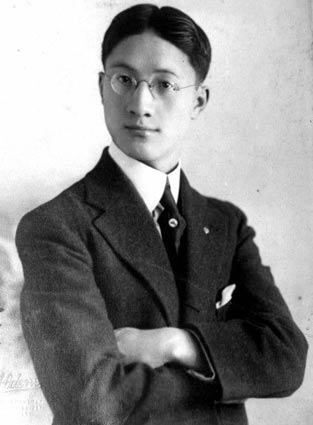 Subsequently, the poem has been learned word for word by generations of Chinese schoolchildren. You can see Its first and last lines carved into the memorial stone at the garden’s entrance. Sadly, Zhimo was killed in a plane crash over China’s Shandong Province in 1934. He was just 34 years old. 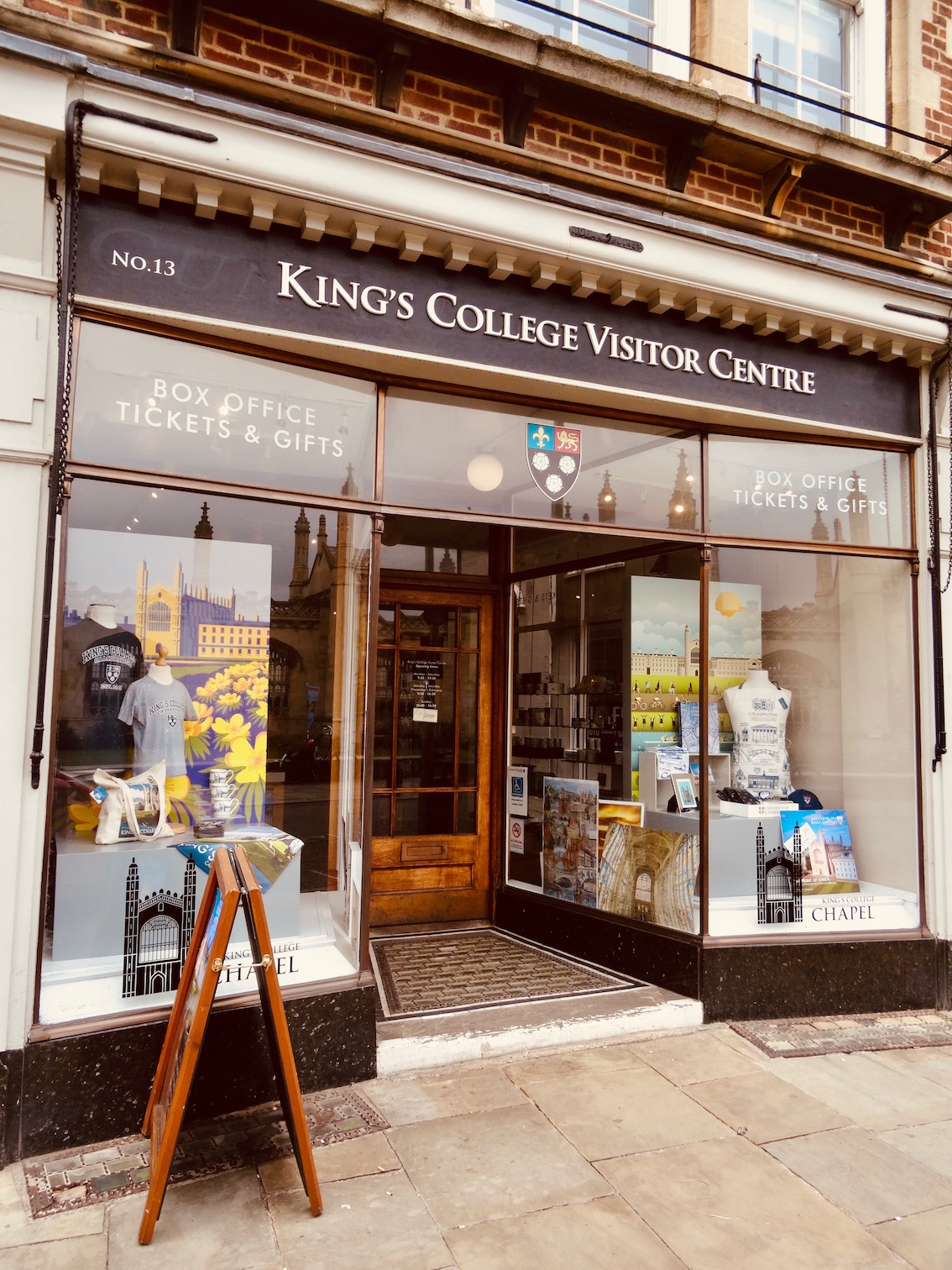 Our morning exploring King’s College and King’s College Chapel was on a general entry ticket priced at £9 per person from The King’s College Visitor Centre. You can find them just across the road from the main entrance to King’s College. The lady in the centre told Mike that, as a Cambridge resident, the tickets we bought that day would be valid for the rest of the year. All he had to do was fill in a quick form!