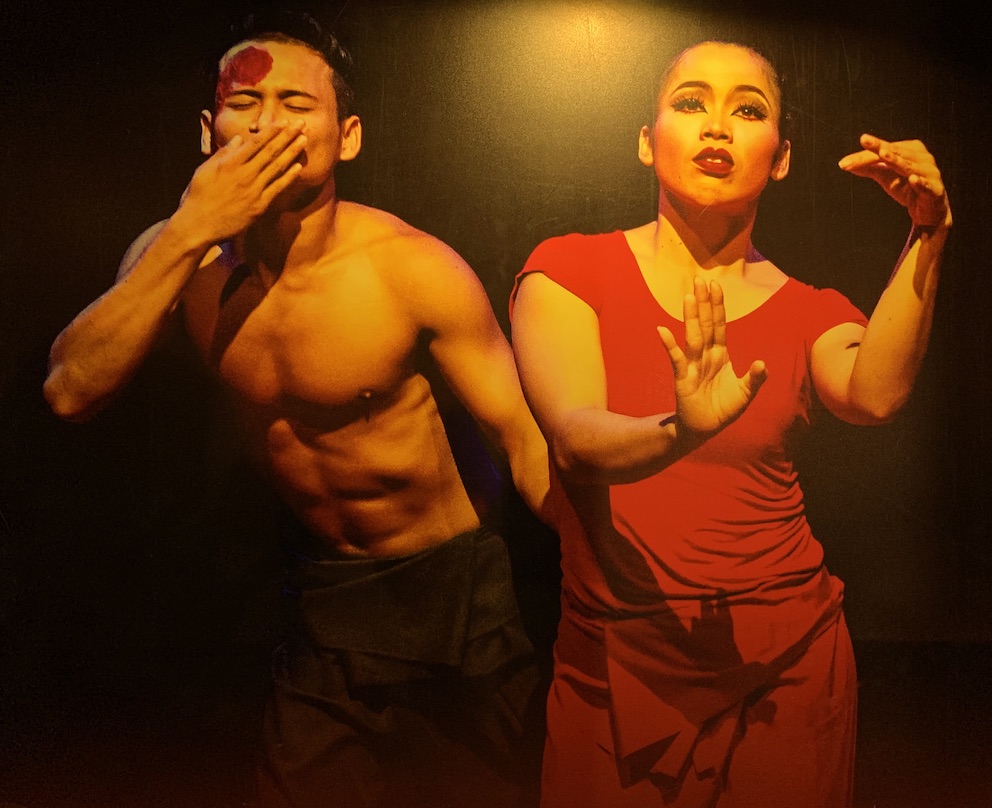 March 2020. I can pinpoint the precise moment the world last felt normal. If I can even use such a word. It was the 3rd of March and Sladja and I were making our way inside the red, big top performance arena for a night at the circus.

I say it felt normal, because we were among several hundred people that evening. Everyone excited at the prospect of seeing Cambodia’s most talented and dedicated artists in action. A fun evening out on a planet that hadn’t yet gone to shit with lockdowns, travel bans and self isolation. 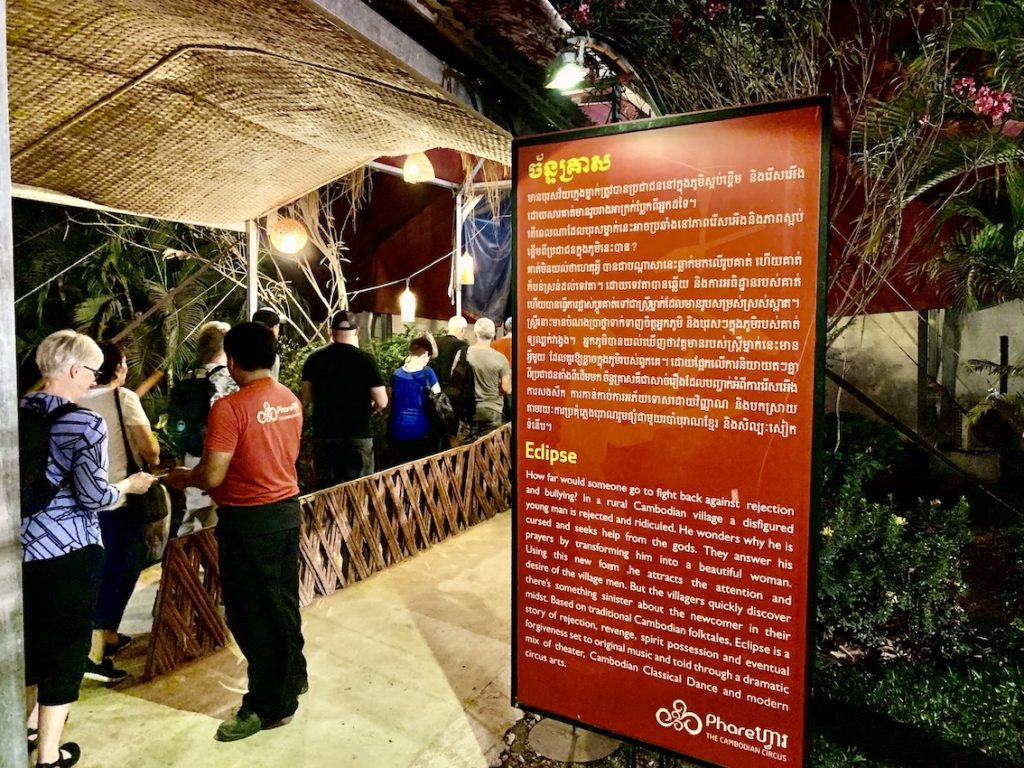 Except it wasn’t normal of course. When I saw how tightly packed in everyone was, I began feeling anxious. After all, neither of us had brought masks. Moreover, someone three chairs down had begun coughing. For a moment, I seriously considered getting the hell out of there. I mean, what had we been thinking?

Without warning the lights dimmed and a wave of hypnotic traditional Khmer music washed over the crowd. Seconds later the arena suddenly lit up in a deep red glow, as nine performers sprinted onto the stage. The men were all bare chested, some of them carrying tall wooden poles. A few others had knives.

Within moments they had formed a menacing circle around a scared looking man and woman. Instantly, I had forgotten all about COVID-19 and found myself completely immersed in the events playing out before me.

What to See and Do, Siem Reap.

For visitors to Siem Reap, a night at the circus is every bit as essential as a day or two exploring The Angkor Temples. Not only due to the amazing acrobatic skills of the performers, but also because Phare Circus is one of the country’s most inspirational social projects.

Phare’s story dates back to the mid 1980s following the fall of the brutal Khmer Rouge regime. In order to cope with post traumatic stress, a group of Khmer refugees began drawing, singing and acting. 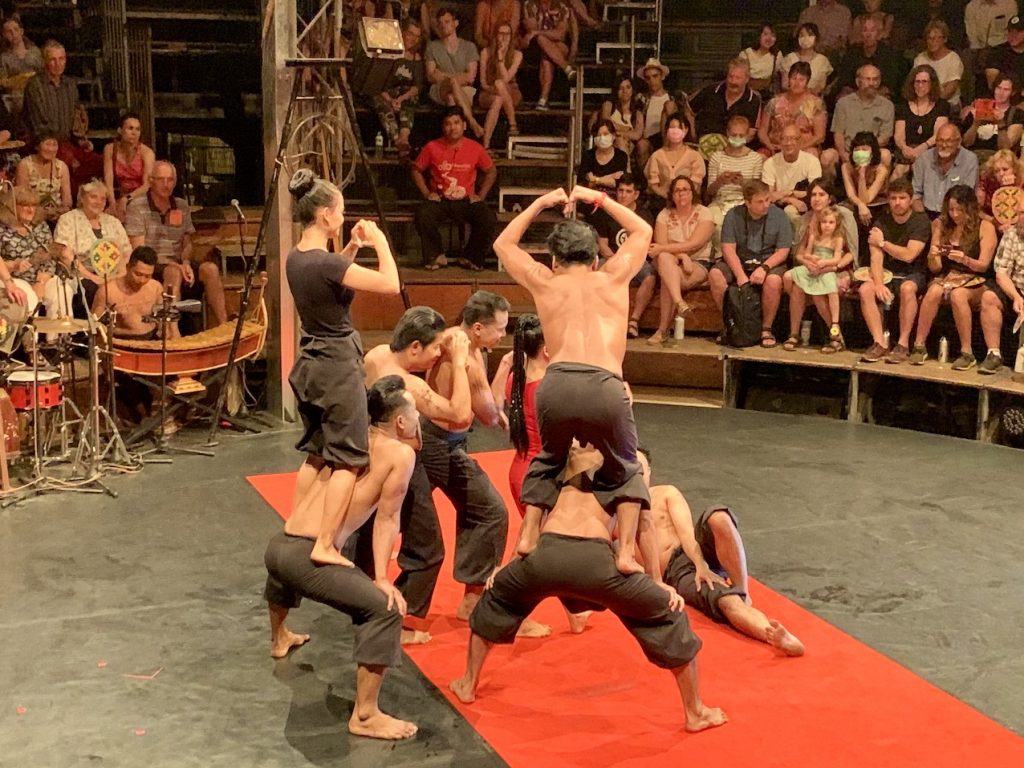 These impromptu gatherings eventually became organised workshops, leading to the formation of The Phare Ponleau Selpak Association in 1994.

Dedicated to child protection and development, the group went on to open two schools specialising in music and theatre. Over time, they also established a public school. Today there are over 1200 attendees, while all offered courses are free of charge. 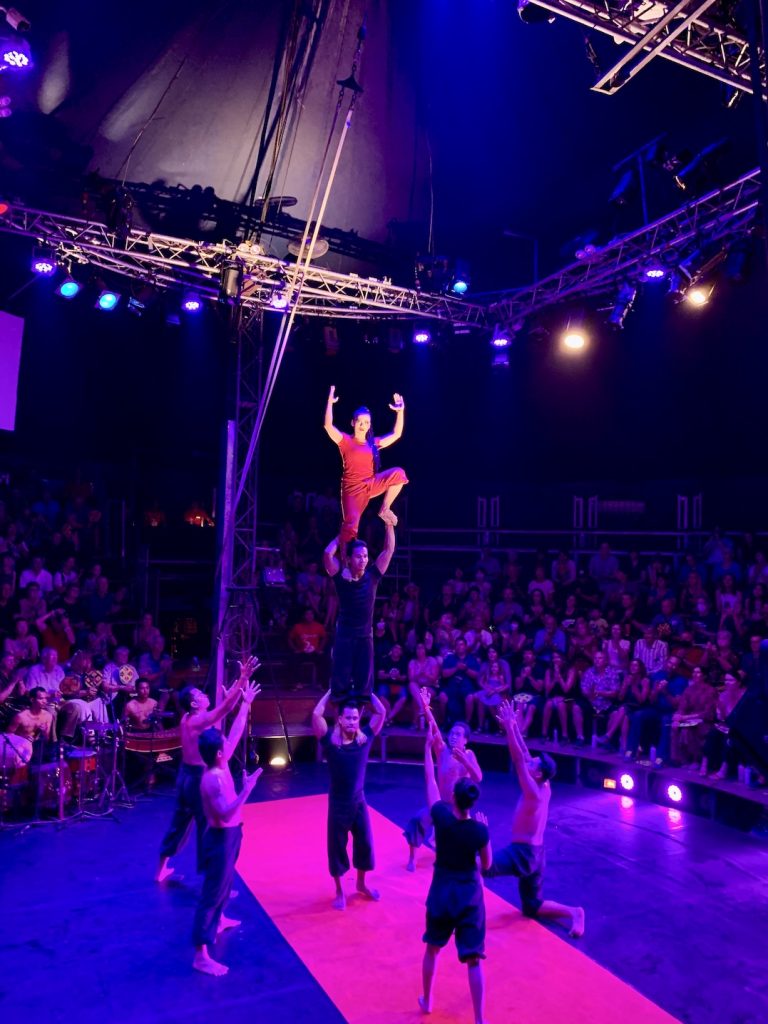 The Phare Circus opened its doors in 2013 with nightly shows under the big top, which holds around 330 people. All performers are Khmer youths from disadvantaged backgrounds. Some of them were orphans or street children. All go through a gruelling 8-10 years of training before they graduate as official circus performers.

This comes as no surprise when you see what these guys are capable of. I’m talking staggering abilities in fire performing, cycling, spinning, pole twirling, tightrope balancing, juggling and breakdancing.

However, these shows aren’t just about dazzling visuals. Each performance tells a unique Cambodian story. It might be a historical adaptation, something based on folklore, or a tale from modern society.

On the night of our visit the story was Eclipse, which follows a young disfigured man bullied by all around him. Broken by constant rejection and cruelty, he prays to the gods for a solution. They respond by transforming him into a beautiful woman, enabling him to exact a ruthless revenge upon his torturers. 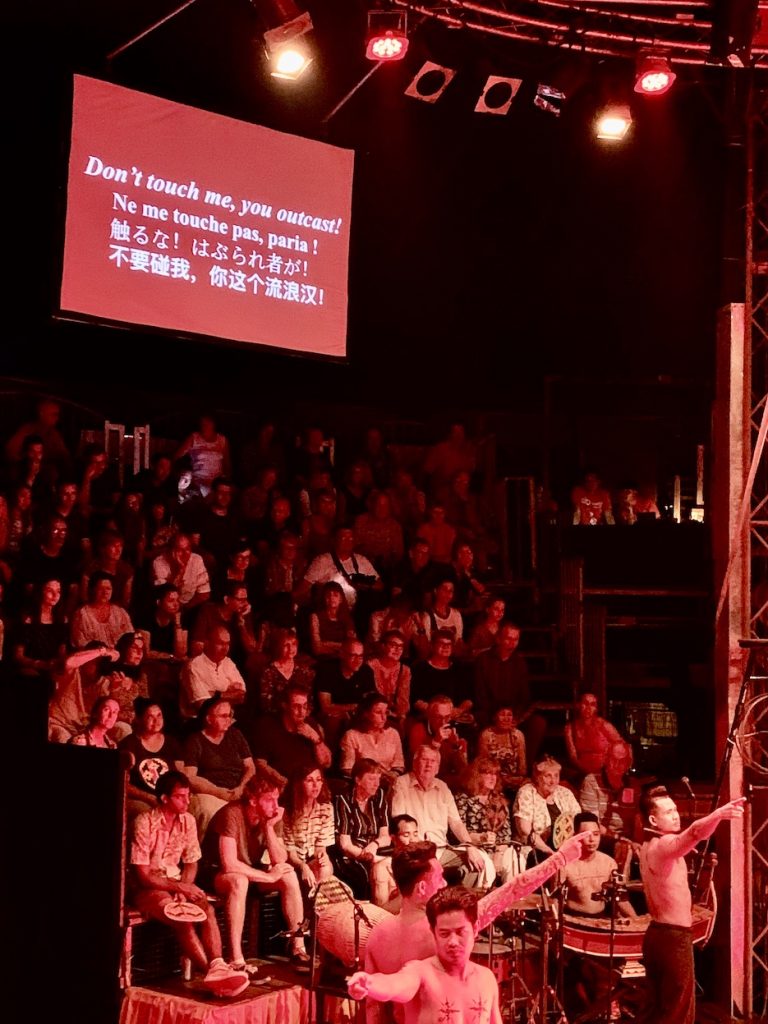 The Eclipse Story at Phare, The Cambodian Circus.

Spoken words arrive in Khmer, but are used thinly throughout the show. A large TV screen in the corner of the arena provides a basic translation in English and French. In any case the story is a simple one that’s easy to follow, allowing visitors to concentrate on the physical action onstage. 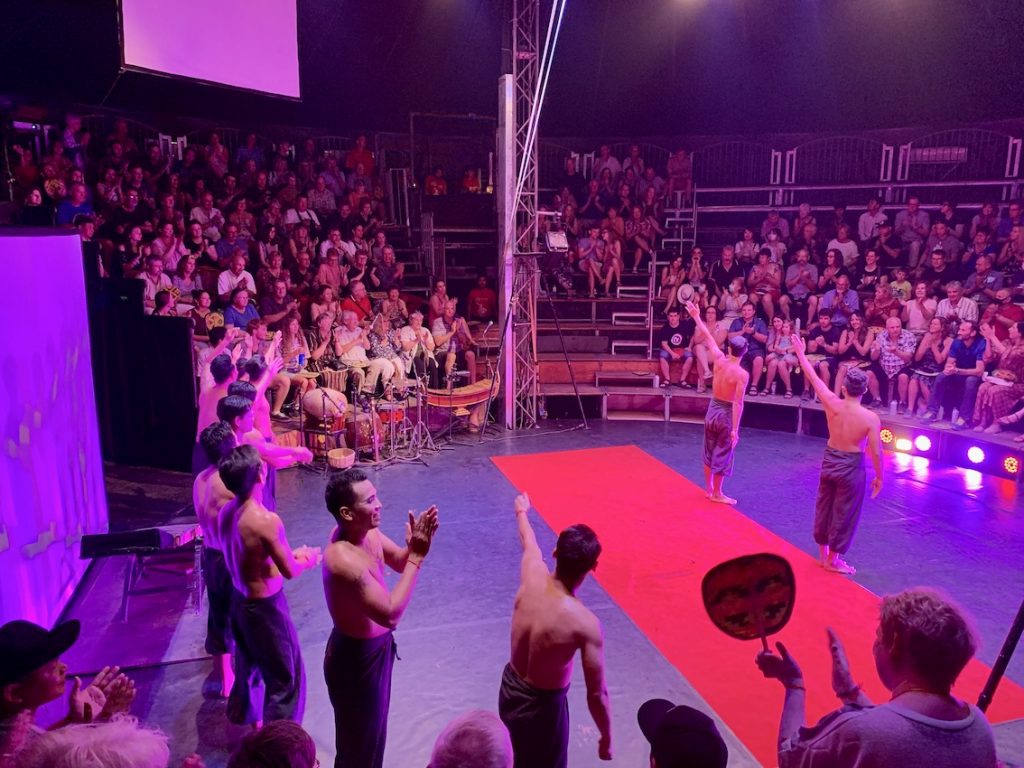 I hadn’t been to the circus since I was a kid. While I enjoyed those long ago experiences, I’d never fully bought into it as a thing of spellbinding wonder and awe. Consequently, I admit that I’d hardly been frothing at the mouth in the days leading up to the show. Rather, I’d viewed Phare simply as a fun distraction. A When in Rome deal that had to be ticked off before we moved on.

The performers at Phare certainly changed my mind! In fact, it’s impossible to deny the majesty of their work, from the incredible energy and positivity of the players themselves to the infectious oohs and aahs of the audience and the persuasive beats of the drums. When it was finally all over I felt energised, inspired, perhaps even a little emotional. 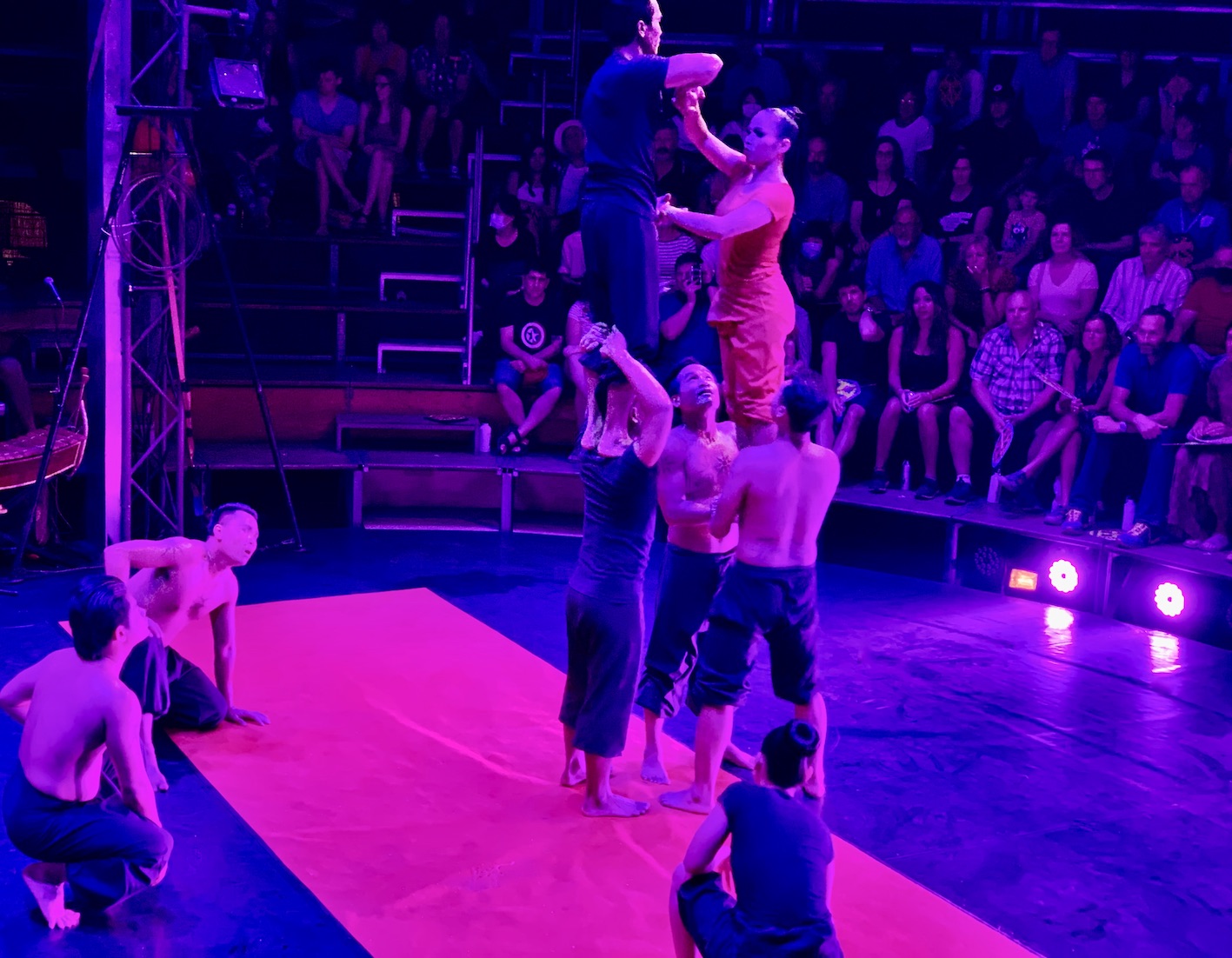 As fate would have it, Sladja and I caught one of the last shows at Phare before it closed its doors due to the virus and the subsequent end of tourism in Cambodia. Luckily for us, attending the show that night unmasked with so many people around proved to be a risk that produced no punishment.

Phare reopened at the end of July and now operates on a new schedule that regularly adapts to the unpredictable nature of the times we live in. For the latest times and ticket prices, it’s best to head to the official website. Keep in mind that 75% of all their profits goes back into the maintenance of the group’s various schools and charities.