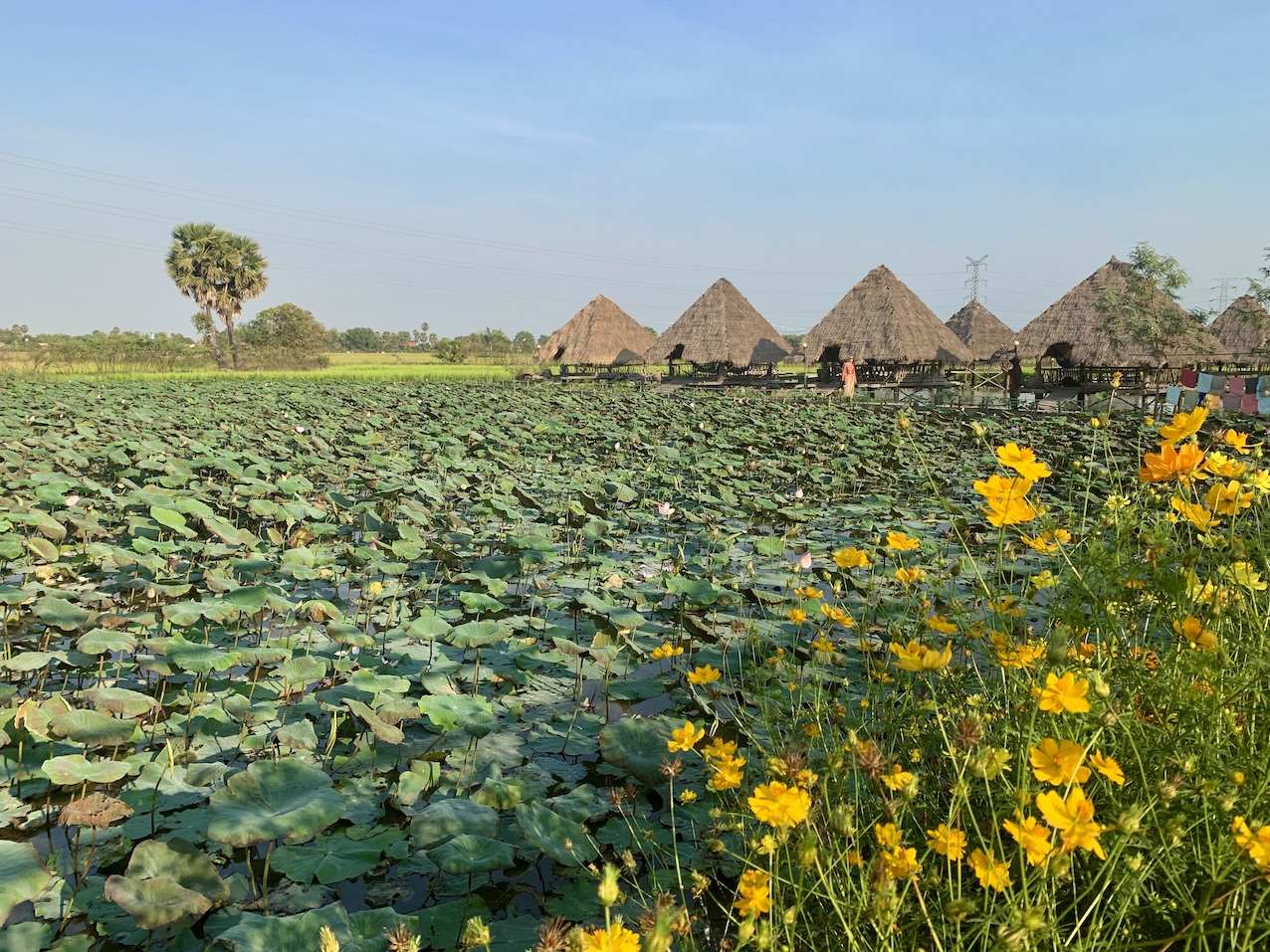 January 2020. It was a burning hot afternoon in Siem Reap as Sladja and I jumped out of the tuk tuk. Wow, was pretty much all I could say, as I drank in the landscape. For the most part, Siem Reap is an uncompromisingly dusty place. Thus we were delighted by this new panoramic, a thick blanket of pleasing green as far as the eye could see.

We’d travelled just twenty minutes from the centre of the city, where a series of lush lotus farms line Route 63, the main road towards Tonle Sap Lake. Each farm houses several gorgeous lakes that harvest the beautiful and versatile lotus plant. 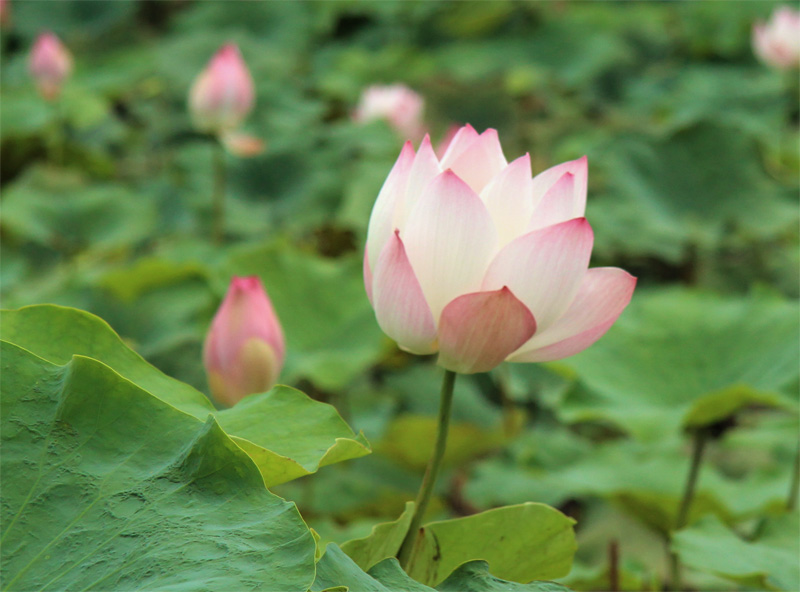 A powerful symbol of purity throughout Asia, Cambodians use the plant as a key staple of Khmer cooking. Its seeds can be eaten raw, the stems find their way into salads and the flower itself acts as an attractive garnish. Oh, and it’s also a popular tea flavour. Moreover, the plant produces a fibre used for various products in the growing industry of eco-friendly textiles. 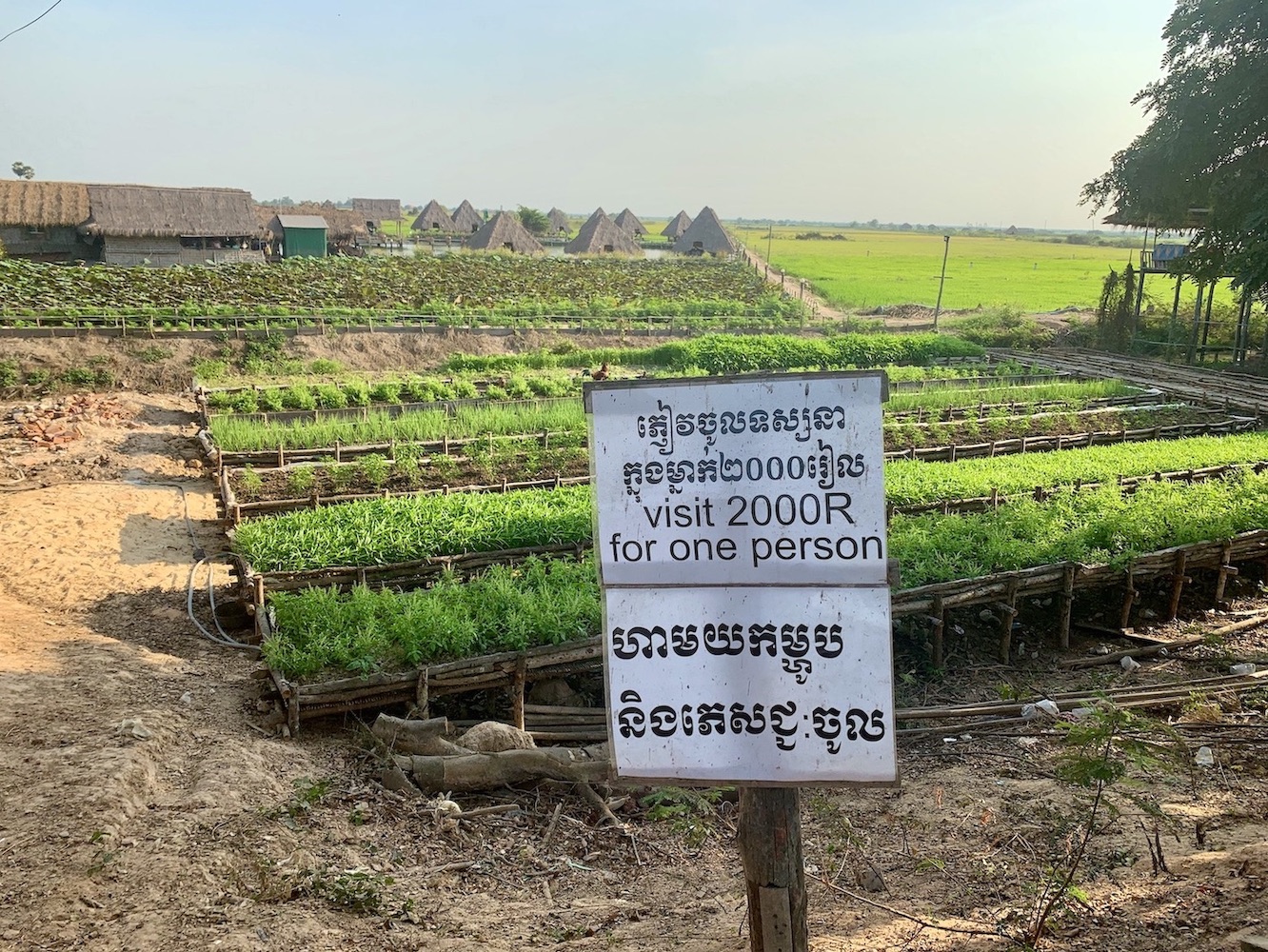 I’d like to say we organised ourselves well that day. But that would be a lie. Rather, we simply told our driver “lotus farm”, figuring he’d know where to go. Sadly he seemed confused from the start. Furthermore, once we reached the farms, he offered no wisdom on where we should stop.

As far as we could see, none of the farms have individual names to tell them apart. Certainly not in English. As a result, we simply took a punt on a large, handsome farm that asked for just 2000 Riel per person as an entry fee. That’s about $0.50 each. Others, we later learned, are free to enter. 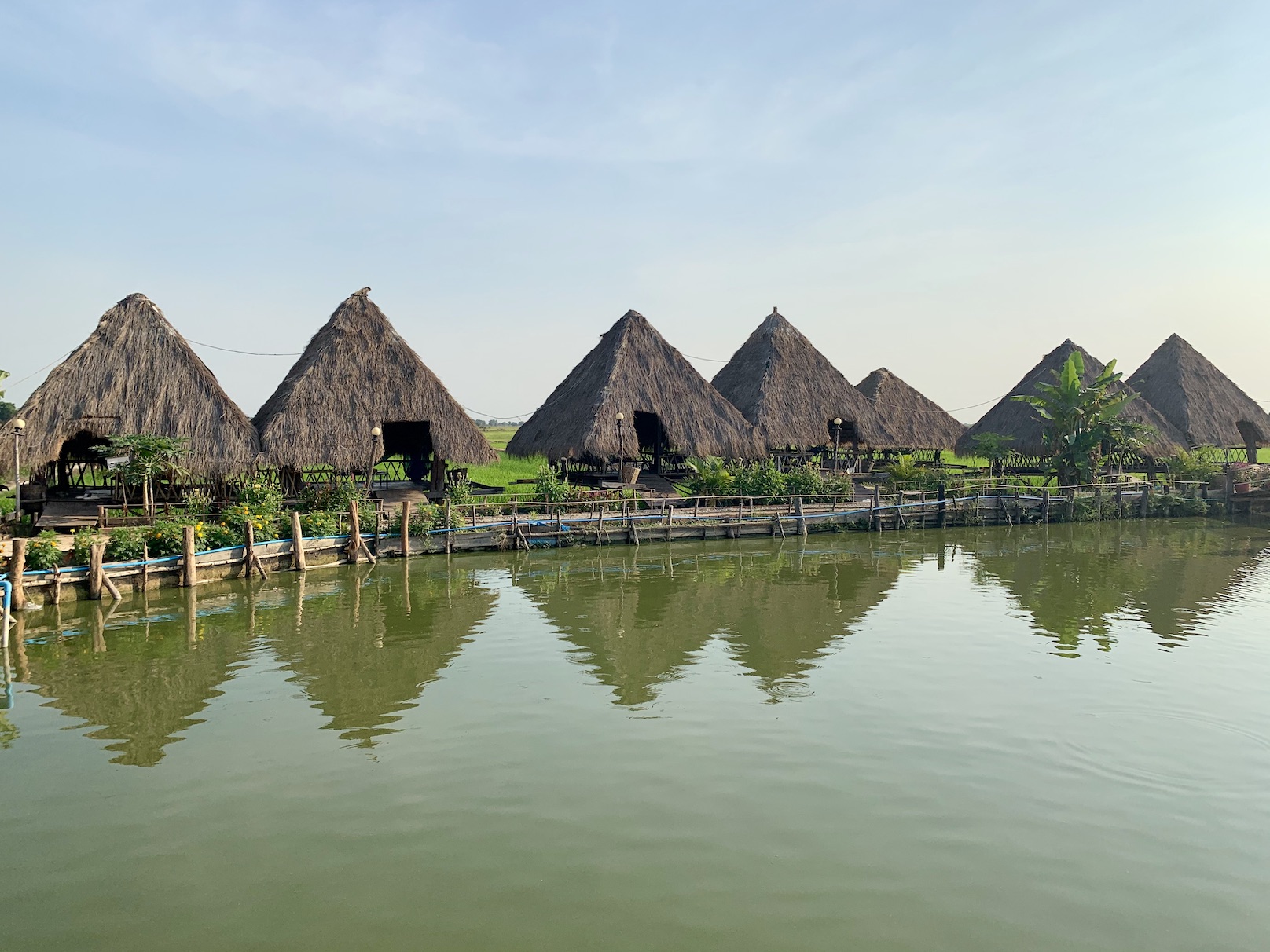 In addition to being operational farms, they also double up as hang out spots for tourists. In fact, you can come here and chill in one of the pretty wooden huts that line the water. Fitted with tables, cushions and hammocks, all you have to do is order some drinks, maybe even a bite to eat and you’re set for a couple of hours. 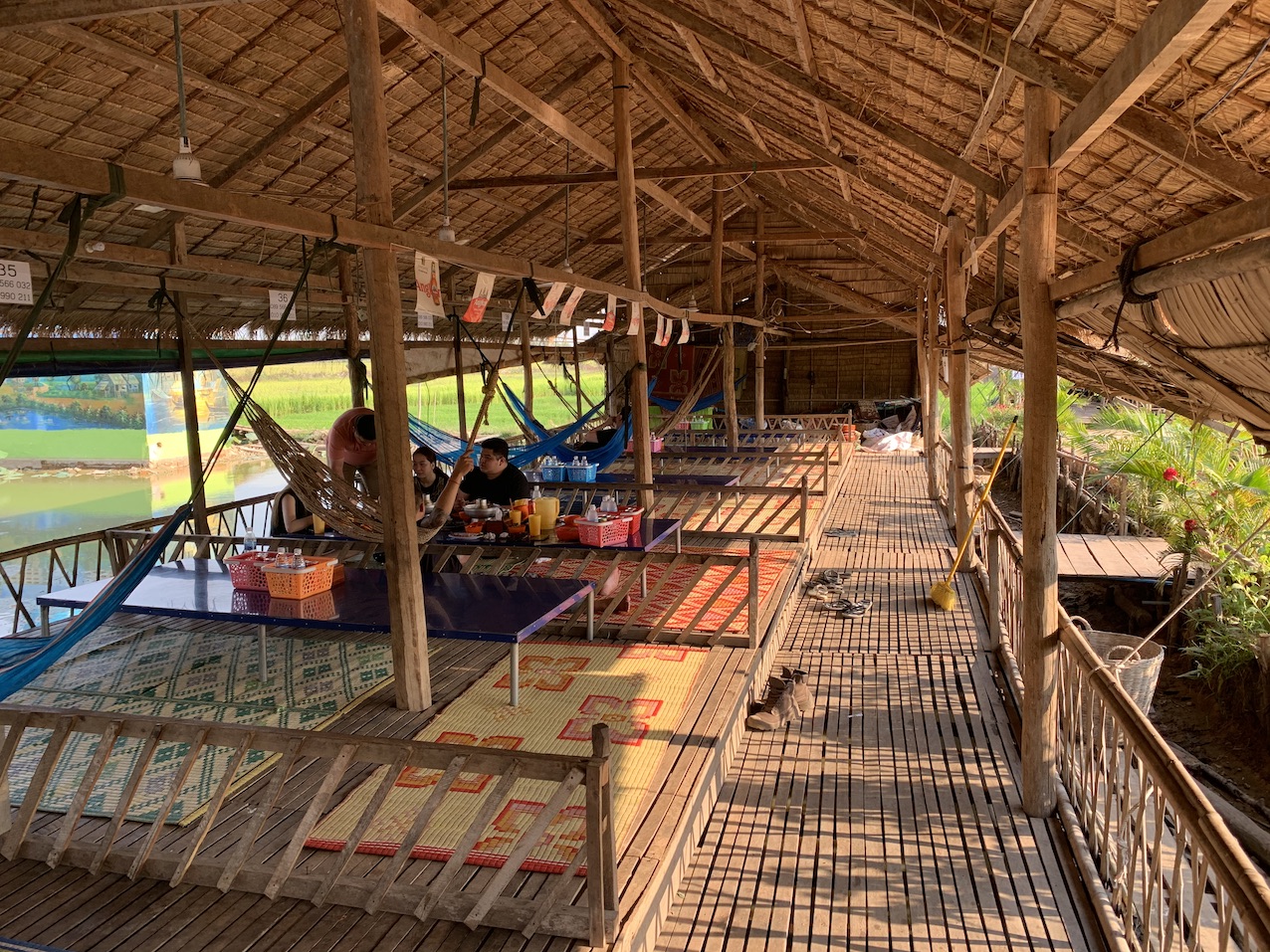 Lunch with a lotus lake view looked wonderful. If only we hadn’t already enjoyed a big meal at Krousar Cafe prior to our visit. 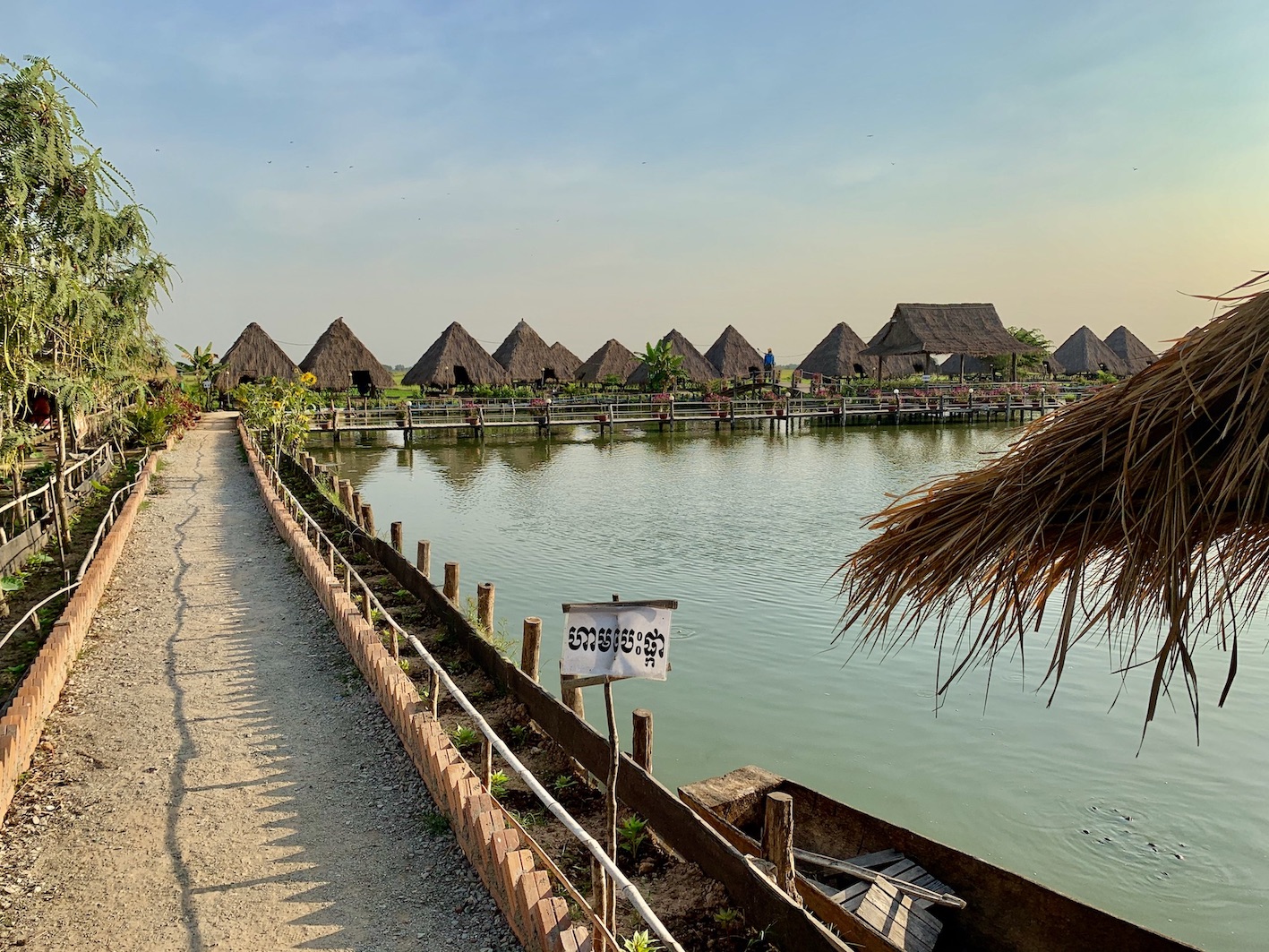 If you’re not chilling, follow the path that winds around the lake. The entire place is incredibly picturesque, not least the idyllic wooden bridge that offers passage across a section of the water.

Right at the back of the farm, a dirt track extends out into the surrounding rice fields. Curious, we decided to follow it and take in the views before looping back towards the farm entrance. 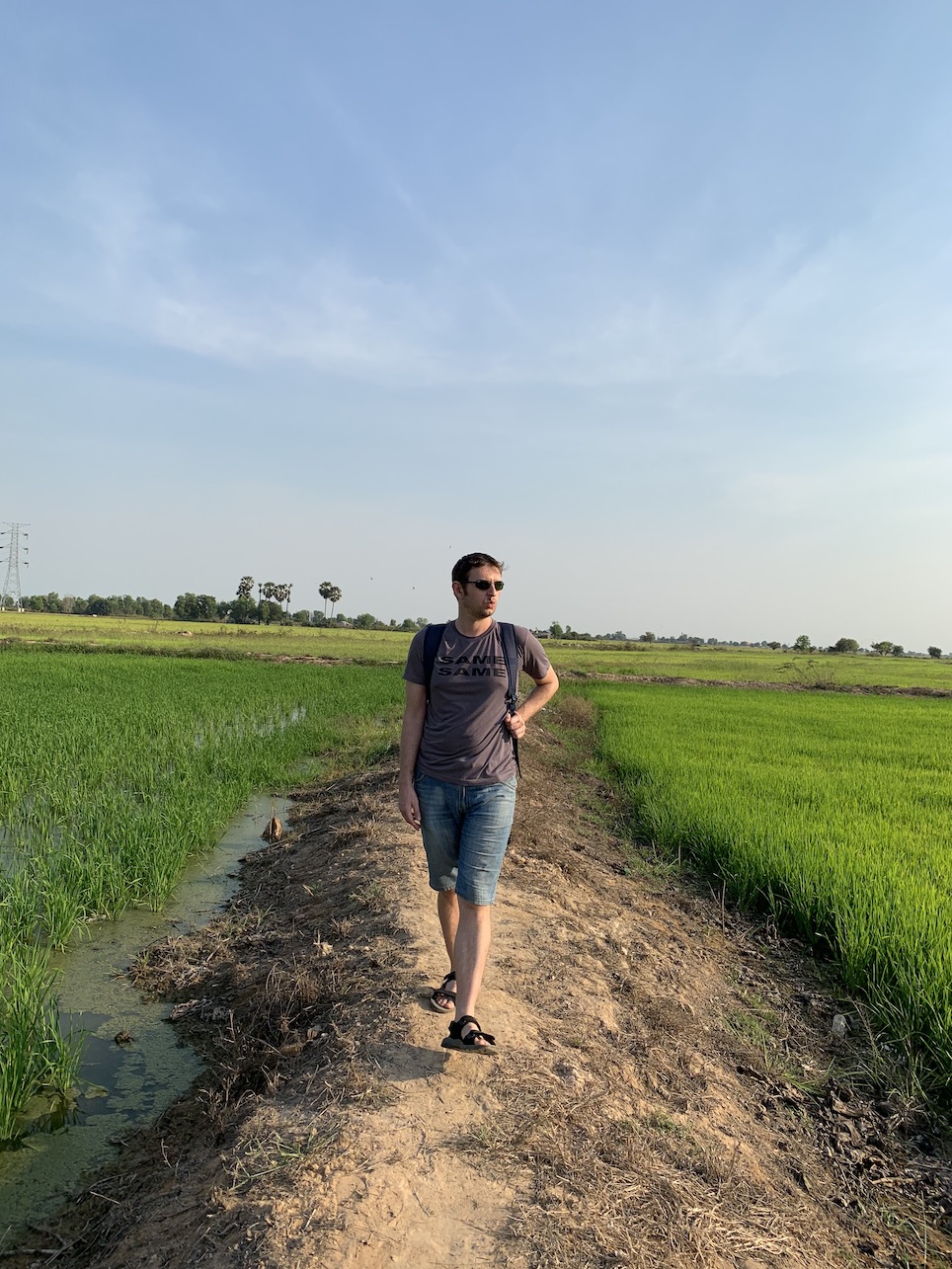 To find out more about the industry of lotus farming, we jumped back into our tuk tuk for the short drive to Samatoa Lotus Farm Textiles. Launched in 2003, these guys are pioneers in the manufacturing of eco friendly, lotus-based textiles. 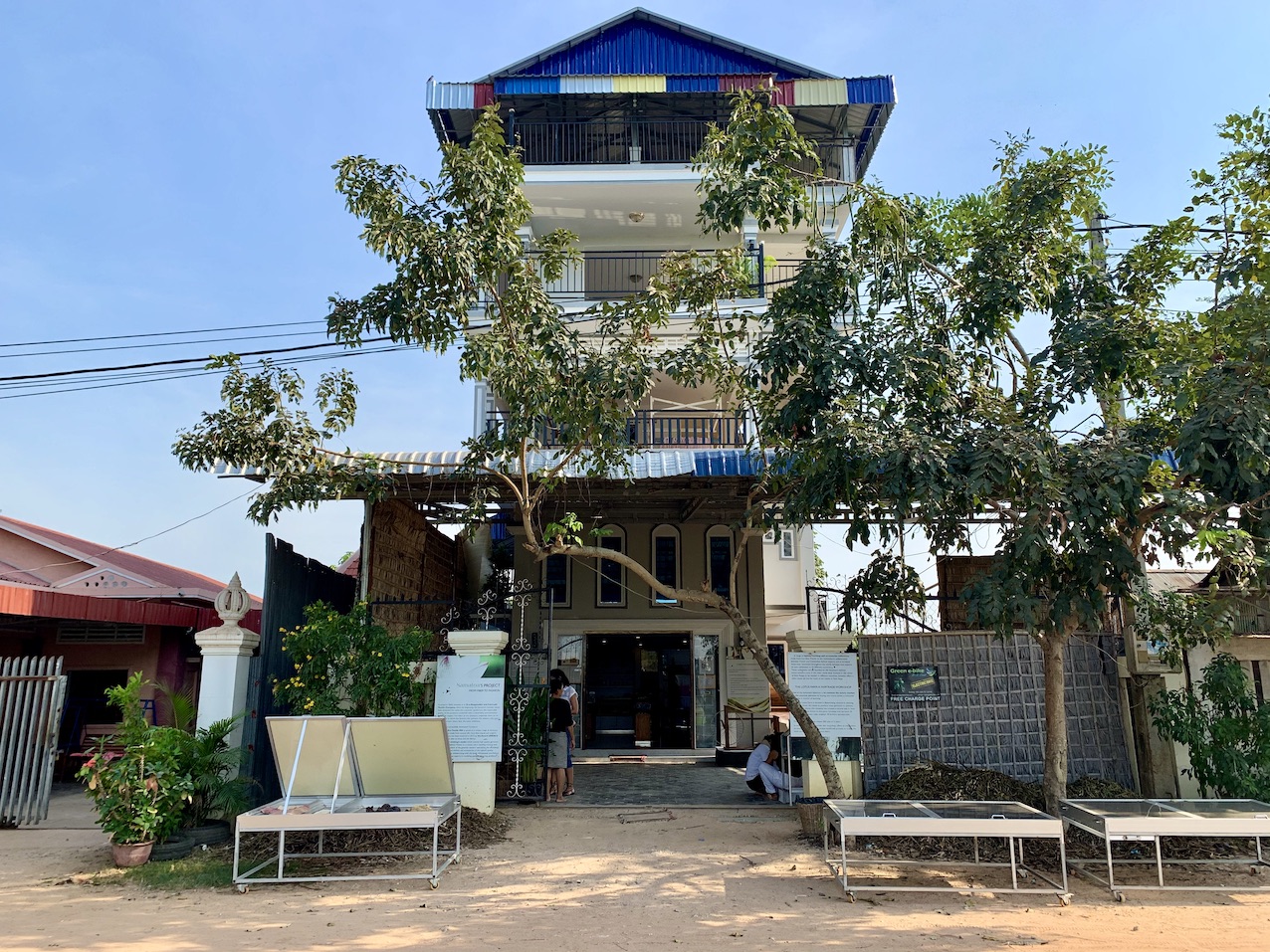 Samatoa owns a bunch of the lotus farms on Route 63, as well as this workshop, boutique and free to visit educational centre. On arrival, a friendly Khmer lady greeted us and took the time to show Sladja and I around. 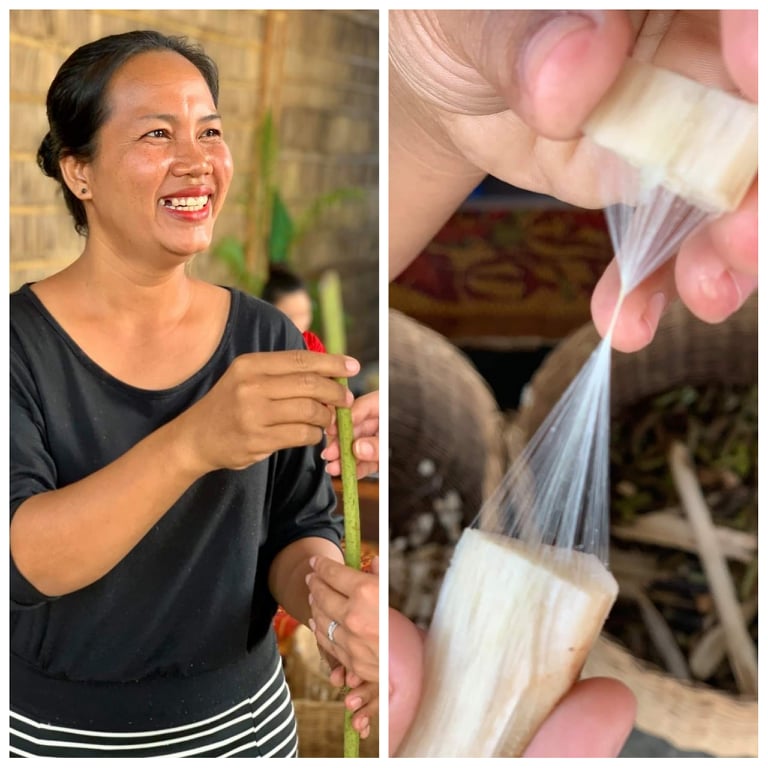 Armed with an infectious enthusiasm and a warm smile, she introduced us to a number of the centre’s resident spinners. All are local women from disadvantaged backgrounds.

While we watched them at work, she gave us a fascinating demonstration of how skilfully they extract the fibre, before starting on the actual spinning. 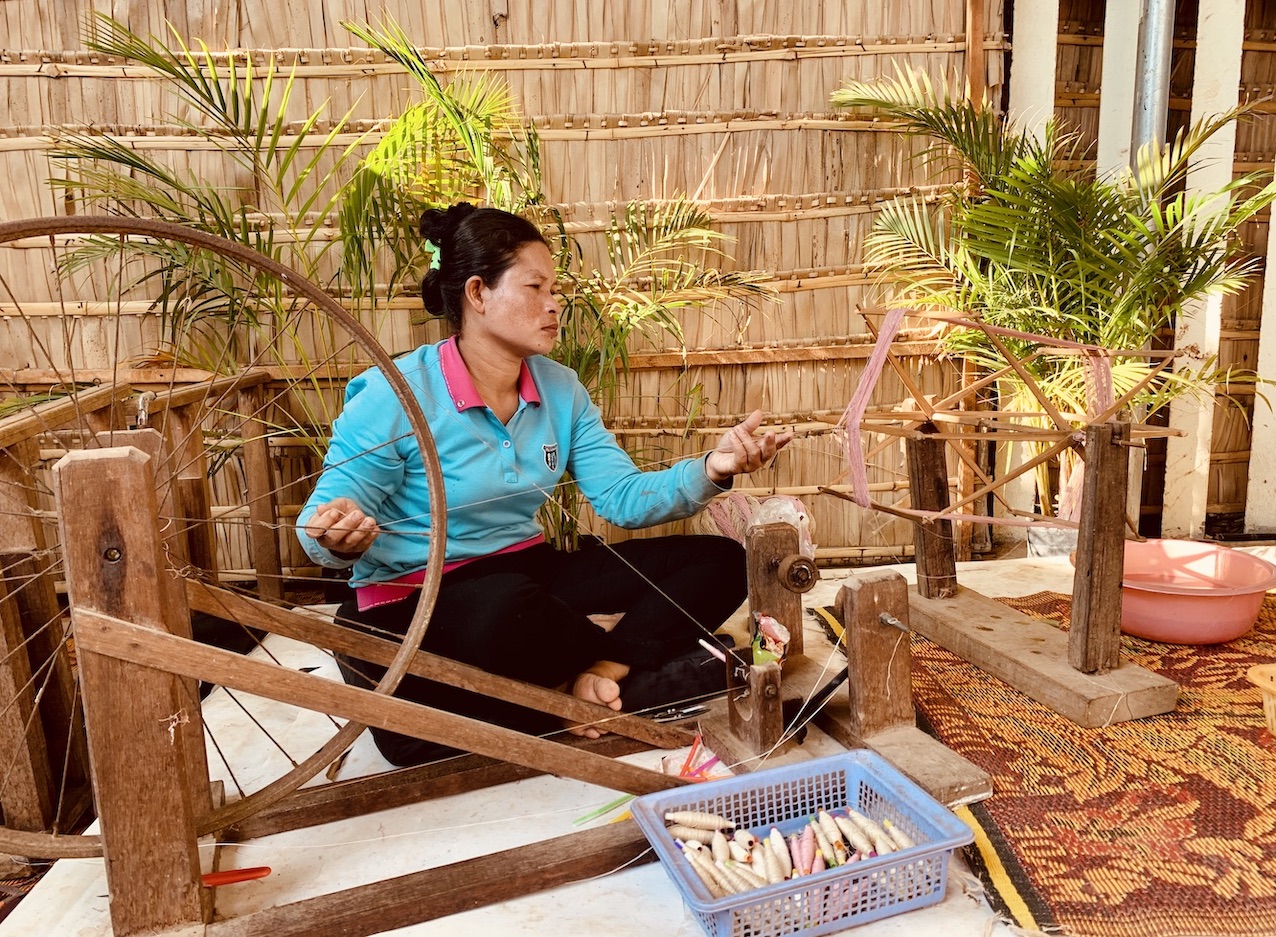 It really is a meticulous process, especially when you realise they have to superimpose and roll a minimum of twelve layers of fibre in order to produce just a single high quality thread.

According to our host, the ladies here typically spin around two hundred and fifty metres of thread every day. To put this into context, an adult jacket requires around 12000 metres of fibre. That’s two month’s work for a spinner. And yes, she does everything exclusively by hand. 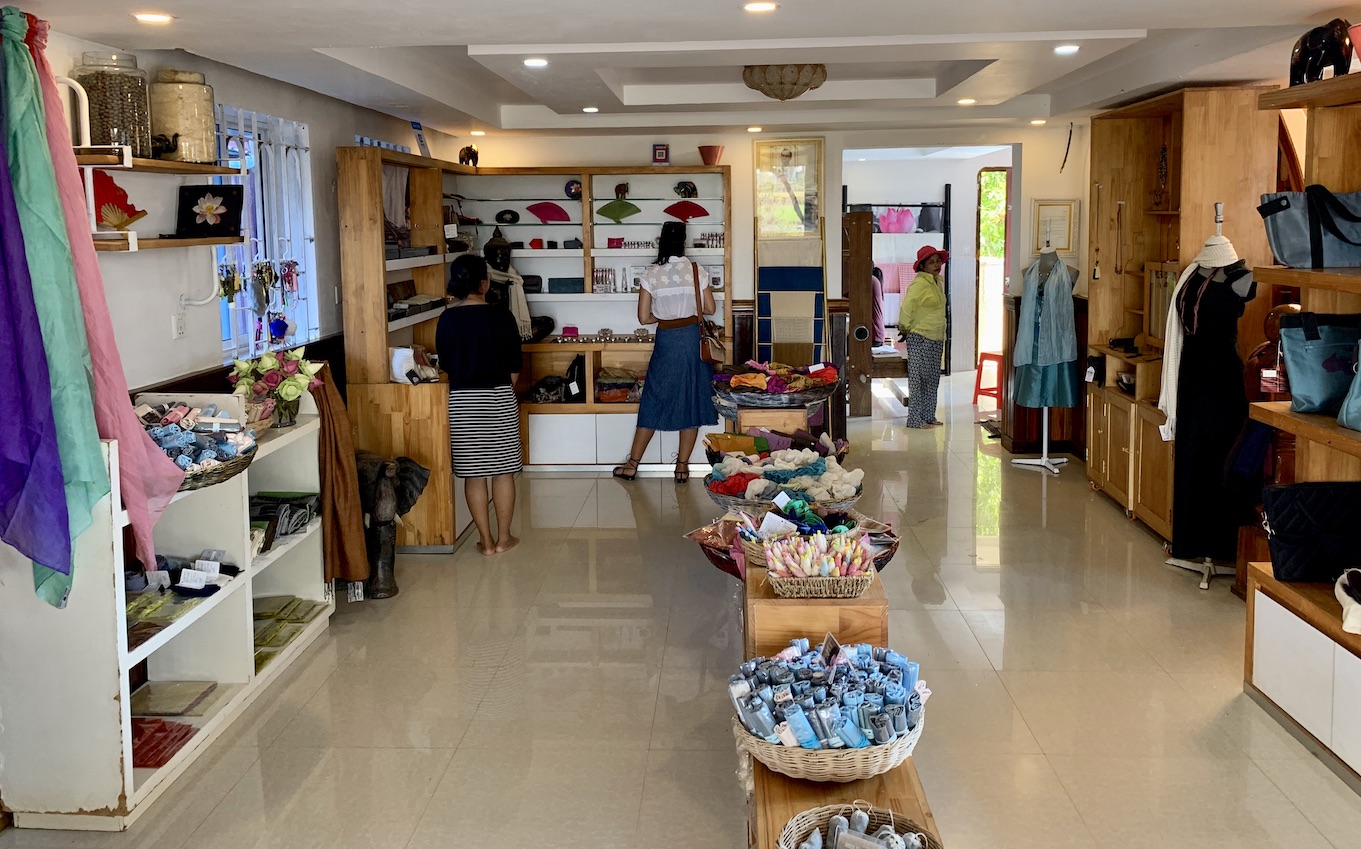 Naturally, they’re hoping you’ll be impressed enough to pick up something from the onsite boutique. We bought some lotus tea, but they also have scarves, bags, jewellery, cosmetics, incense and high end shirts and dresses. 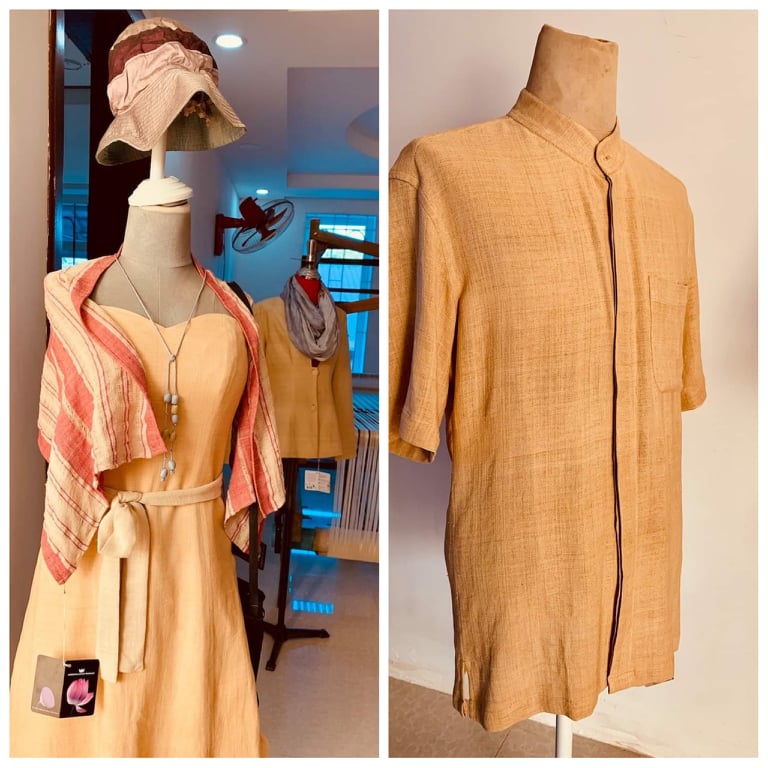 I’m not kidding when I say high end. The above dress was on sale for $725. The man’s shirt meanwhile could have been mine for a cool $690. 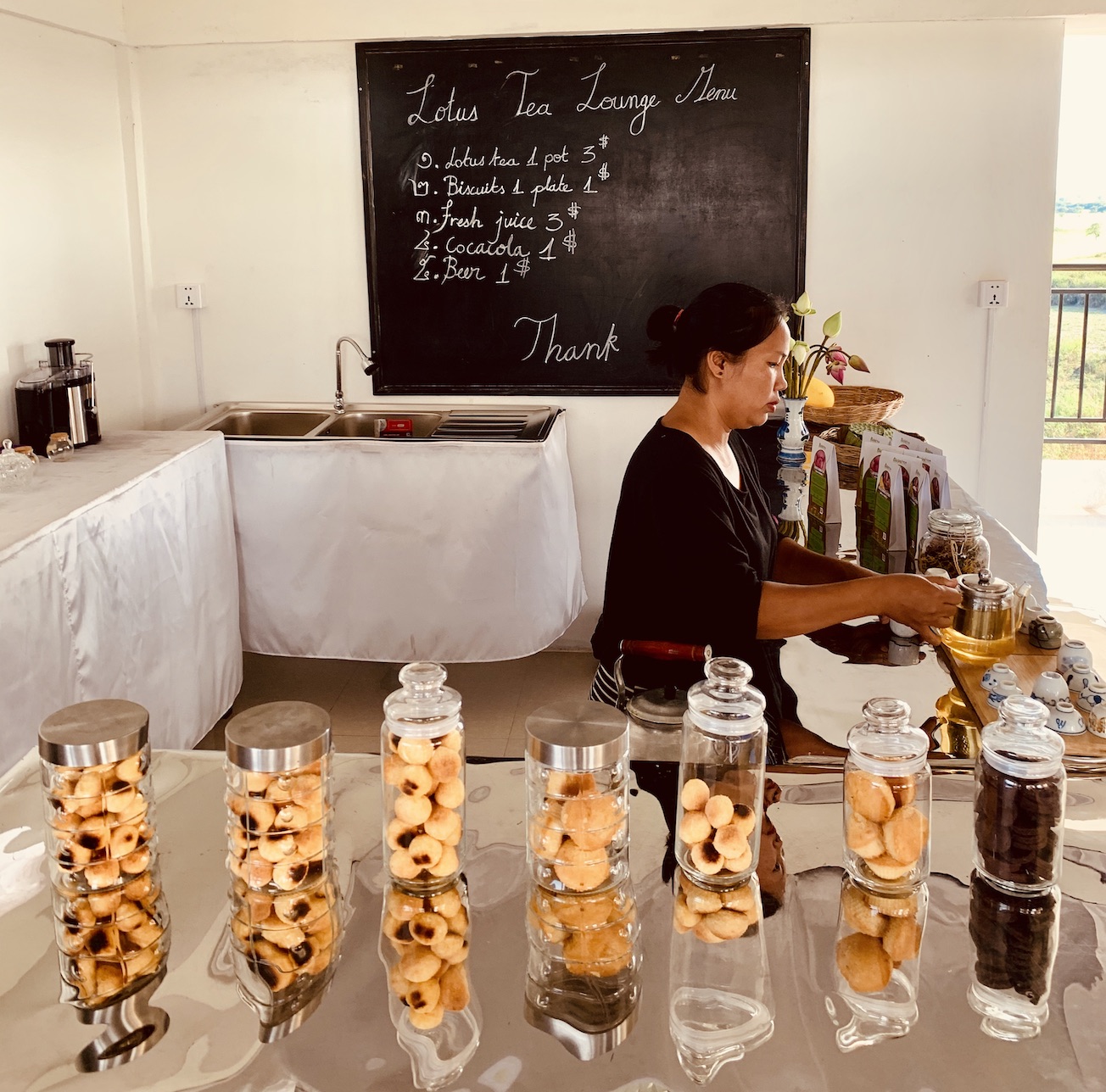 The rooftop cafe at Samatoa Textiles.

Feeling all browsed out, we were happy when our host led us upstairs to Samatoa’s rooftop cafe. Here, she treated us to lotus tea and cookies. What’s more, the cafe has 360 degree views of the surrounding lotus fields and rice farms. Really pretty and, I’m guessing, a great spot for sunsets. 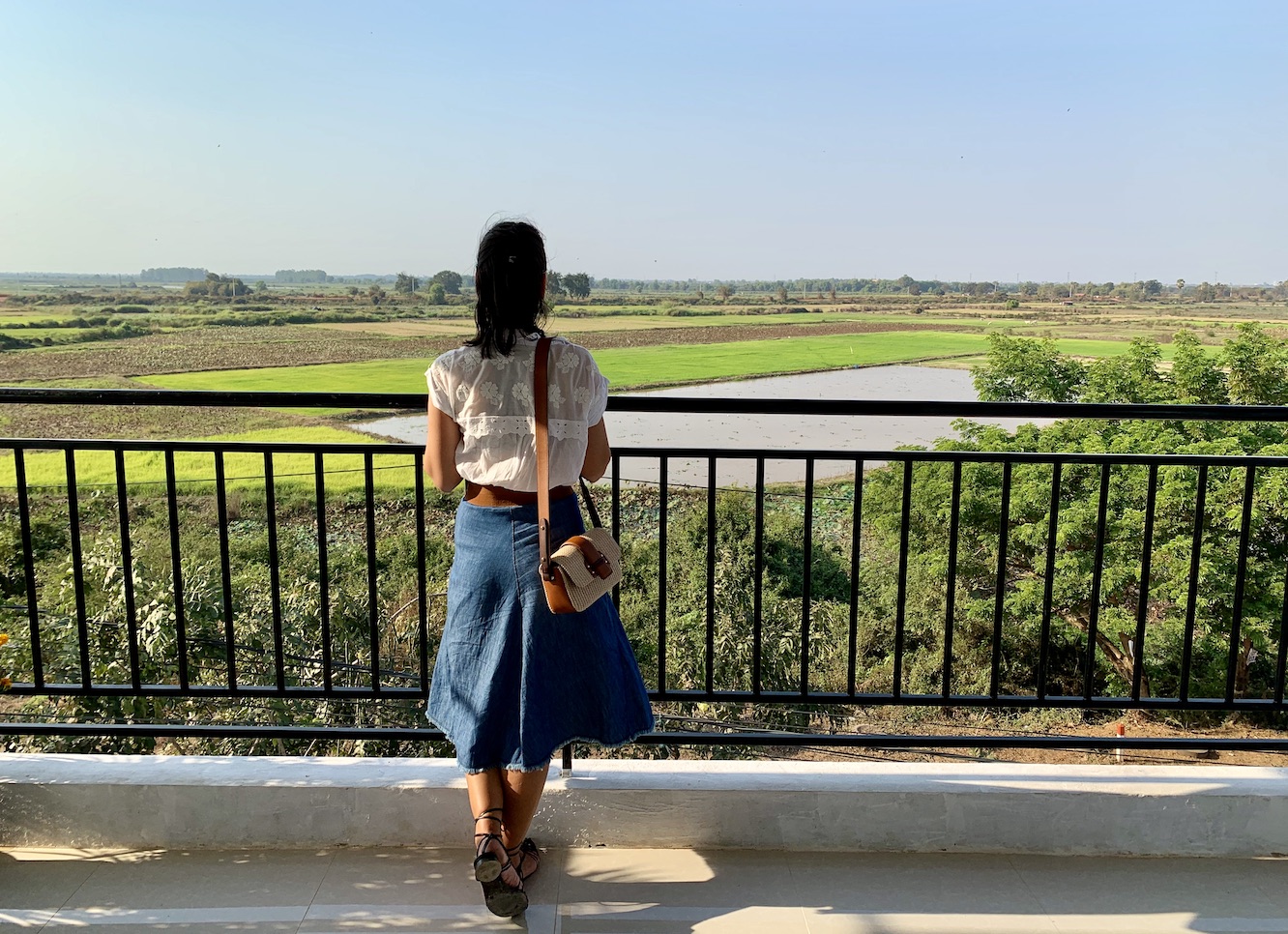 The rooftop cafe at Samatoa Textiles.

For more on Samatoa and their work in Siem Reap, head to the official website.