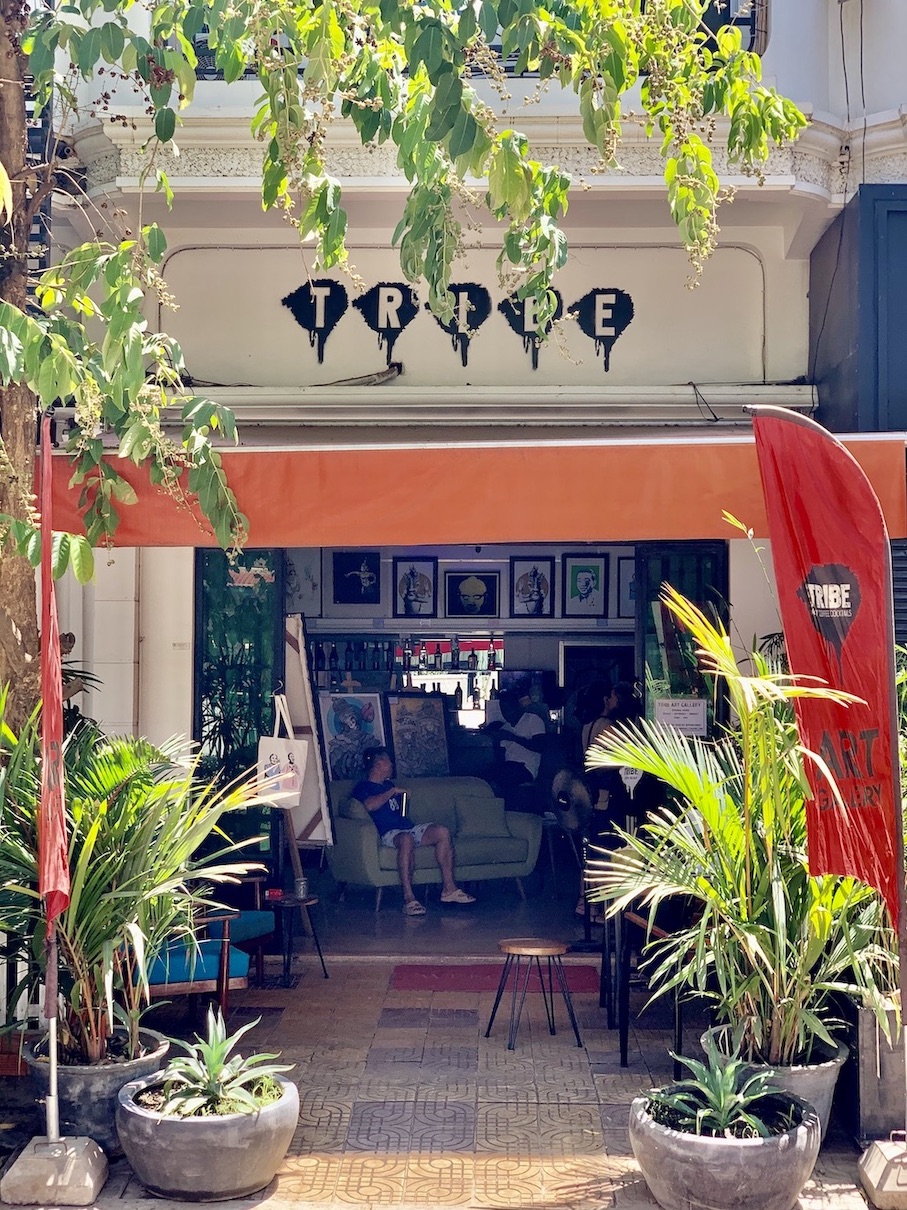 I always enjoyed the flourishes of street art peppered around Siem Reap’s trendy Kandal Village. Each time we came here, usually for coffee at The Little Red Fox, sometimes for breakfast at Ivy Guesthouse, Sladja and I would notice something new.

Eventually, an almost shameful six months into our Siem Reap adventure, we did some digging on who created the neighbourhood’s charming murals. The answers to our questions came one sunny morning at Tribe Art Gallery. 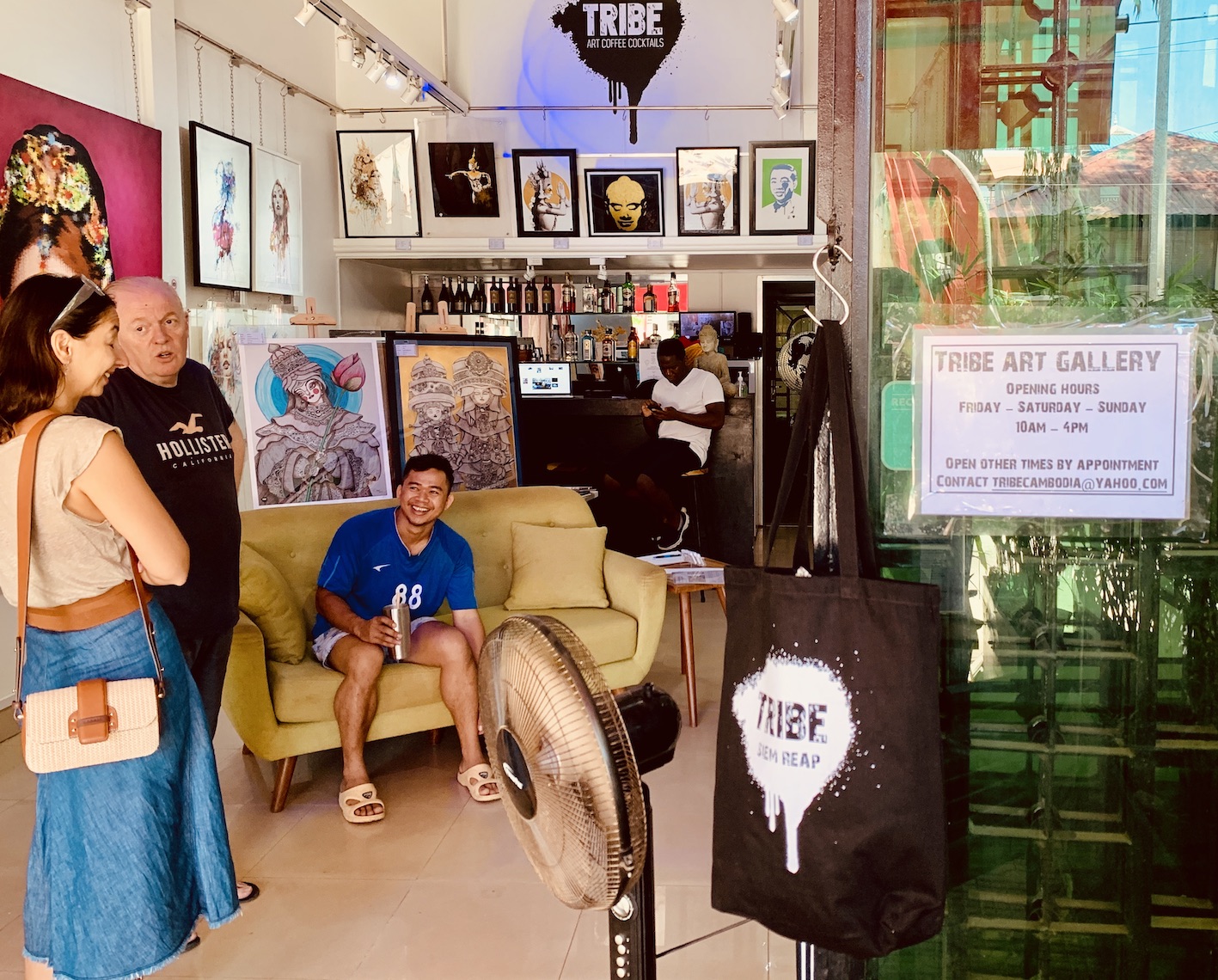 Our host that day was Terry McIlkenny, who co-founded this tiny gallery with his partner Nat-Di Maggio in December 2018. Both have been art lovers, collectors and occasional curators for years.

While incredibly passionate about London’s urban street art, they nevertheless found themselves desperate to escape the city every year. “Bloody English winters!” laughed Terry. As a Londoner myself, there was no need for Terry to elaborate. 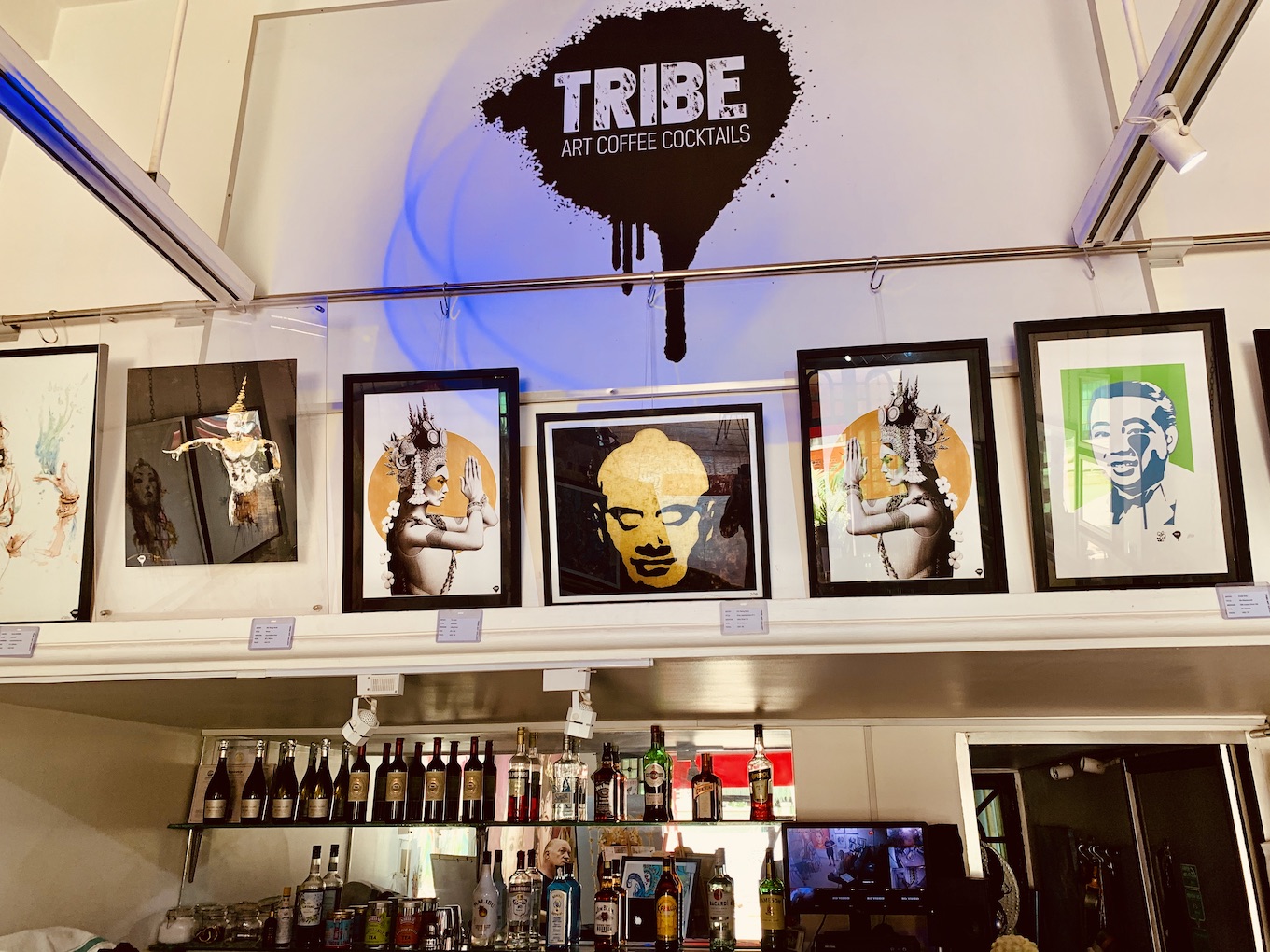 Annual holidays to Cambodia finally led Terry and Nat to set up shop in Siem Reap. While the gallery itself is small in size, there’s nothing modest about the scale of their ambitions. First, they dedicate themselves to supporting and nurturing local artists. Secondly, they continue to share their love for London street art through regular exhibitions and events. 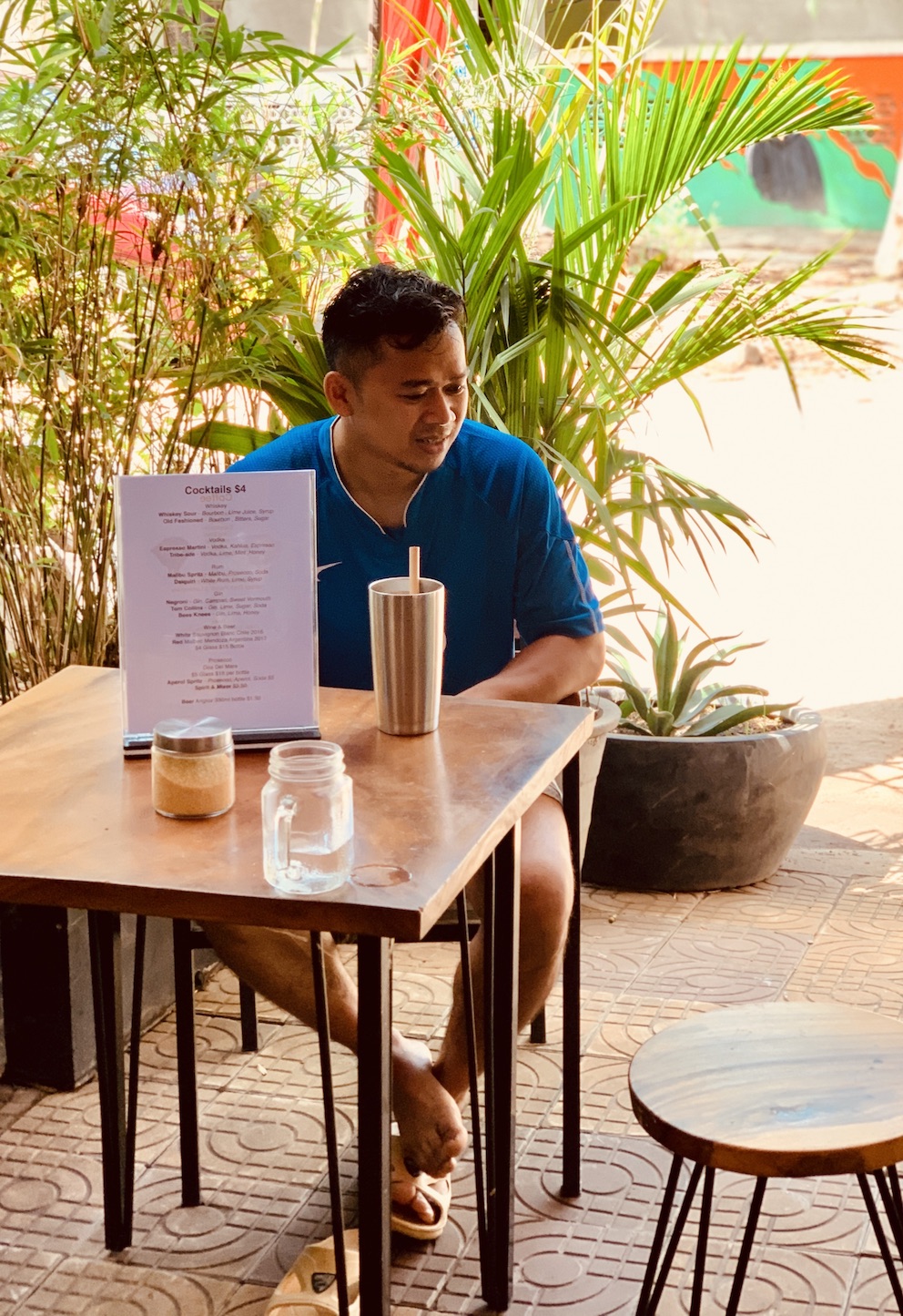 As fate would have it, one of Tribe’s local success stories was hanging out in the gallery during our visit. Thus Terry introduced us to the incredibly talented photographer, Kak Sok Phirom. Softly spoken and a touch shy, Phirom says he owes everything to Terry and Nat. “They gave me confidence and convinced me I am talented”, he says. 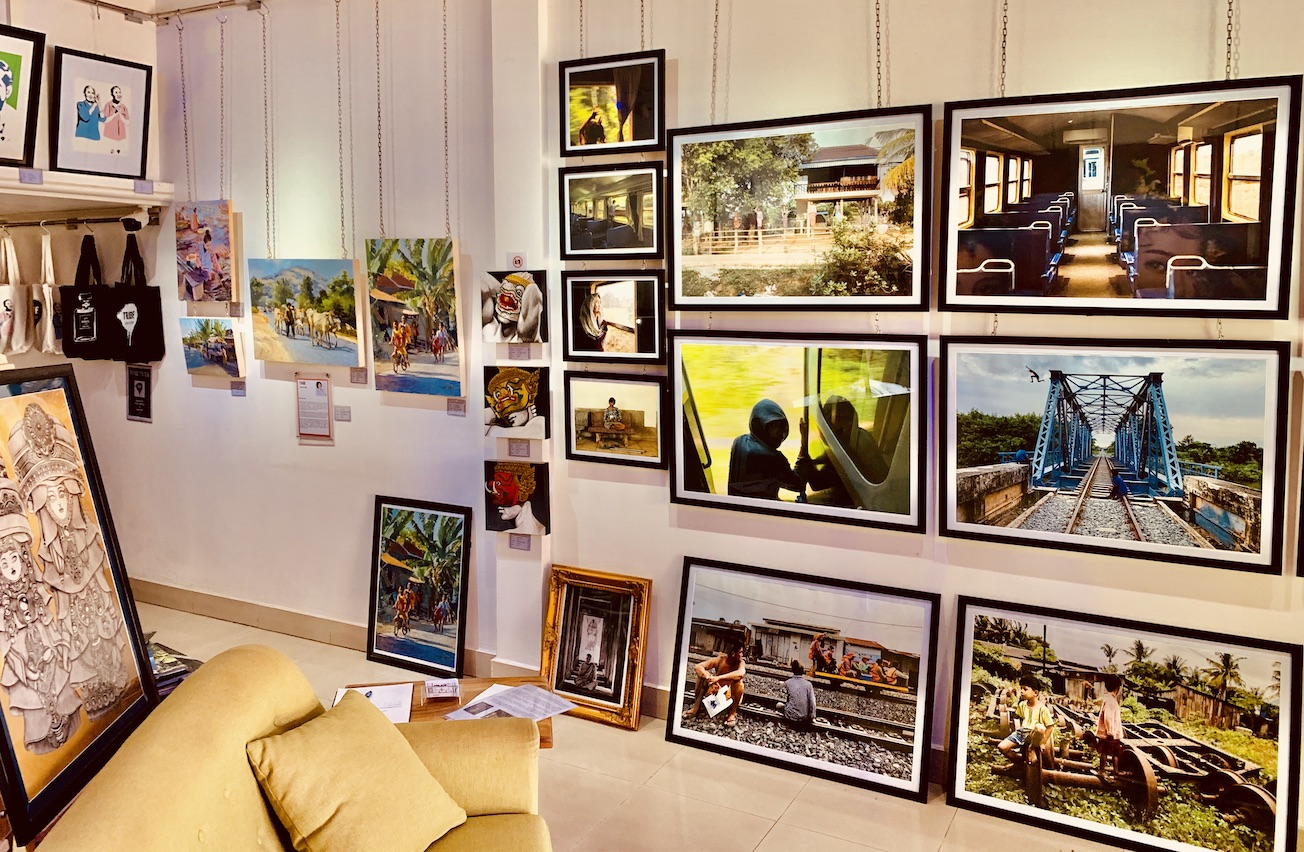 One Day One Way, an exhibition by Kak Sok Phirom.

Neatly arranged across one of Tribe’s main walls, Sladja and I took a look at his arresting exhibition One Day One Way. The photos document Phirom’s inspirational journey travelling Cambodia’s Northern Rail line in 2018. Along the way, he stopped at Sisophon, Battambang, Pursat and Kompong Chhnan to meet the locals, hear their stories and take their photos.

“For me the train is like life. Sometimes busy and full of laughter. Suddenly, it can be empty and you find yourself all alone. Wait long enough and you’ll find new experiences and opportunities at the next station”. 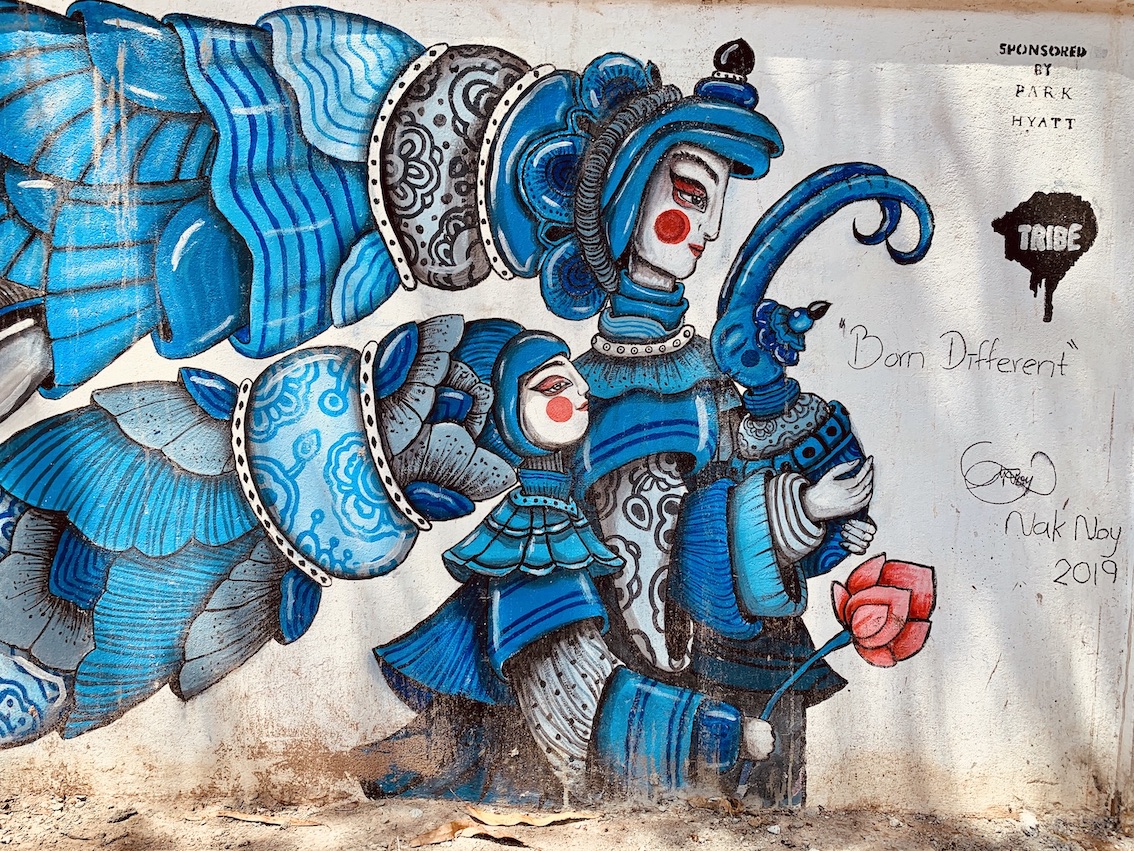 Another talented Cambodian nurtured by Tribe is Nak Noy. He’s just twenty years old, but has already carved out an ever-growing reputation as a bold and fearless artist. His work often features the feminine form, channeled through intricate patterns and metaphors around innocence, nature and hope. 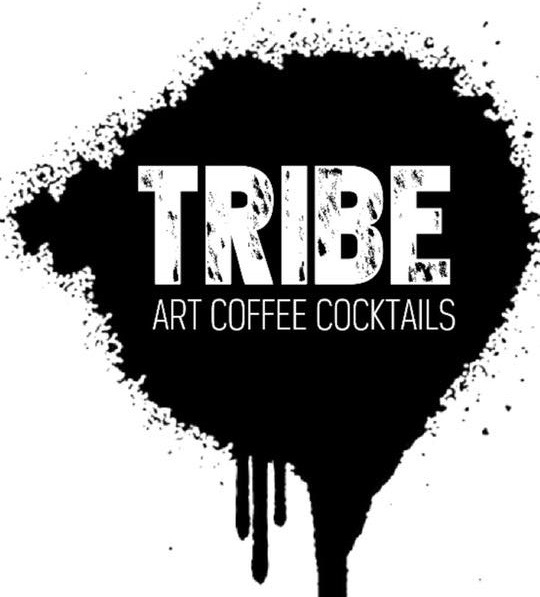 You can find prints of Nak Noy’s work in the gallery. Moreover, his beautiful mural, Born Different, takes pride of place directly across the road from the gallery. Leading us outside, Terry showed us another stunning Nak Noy painting, just around the corner at Coconut Alley. 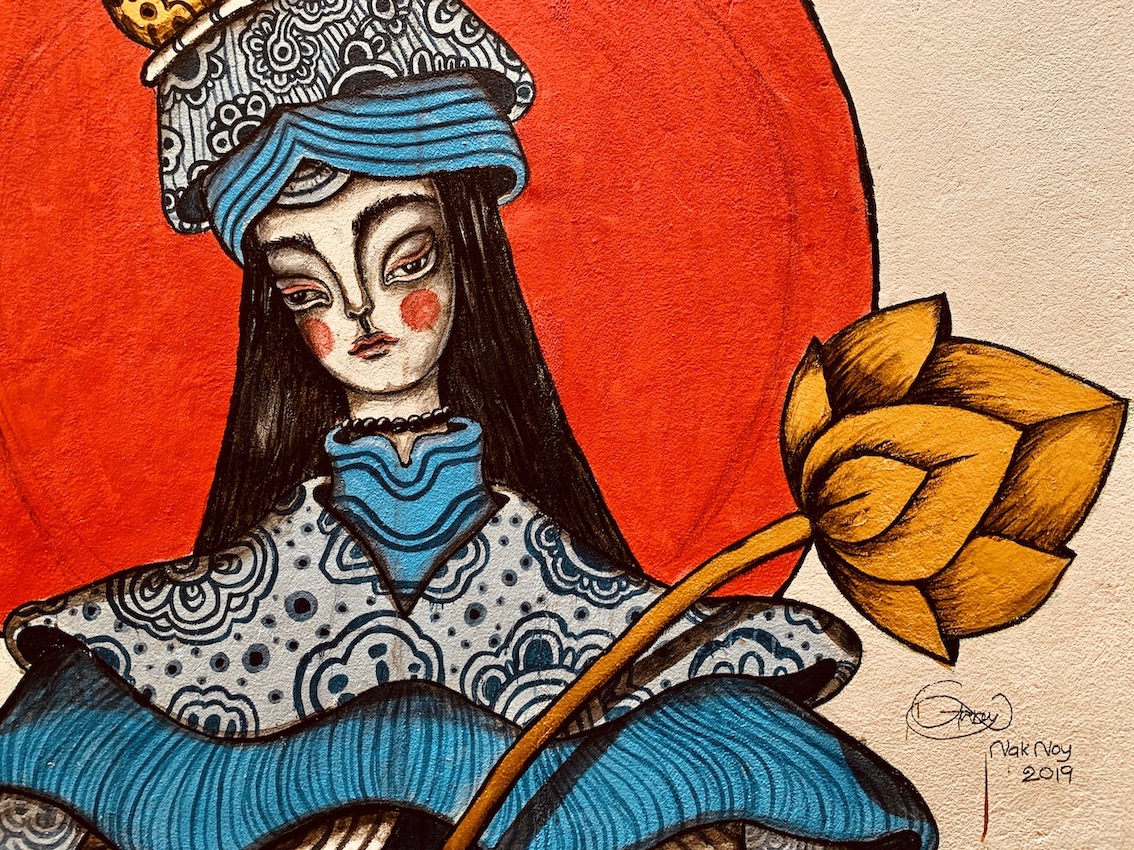 The alley is a particularly heartwarming part of the Tribe story. Over the past couple of years Terry and Nat have transformed this once sad, derelict alley into one of the city’s coolest, albeit underrated sights. You certainly won’t have any trouble finding it. Just look out for Siem Reap’s lovely coconut ladies, stationed at the entrance to the alley. 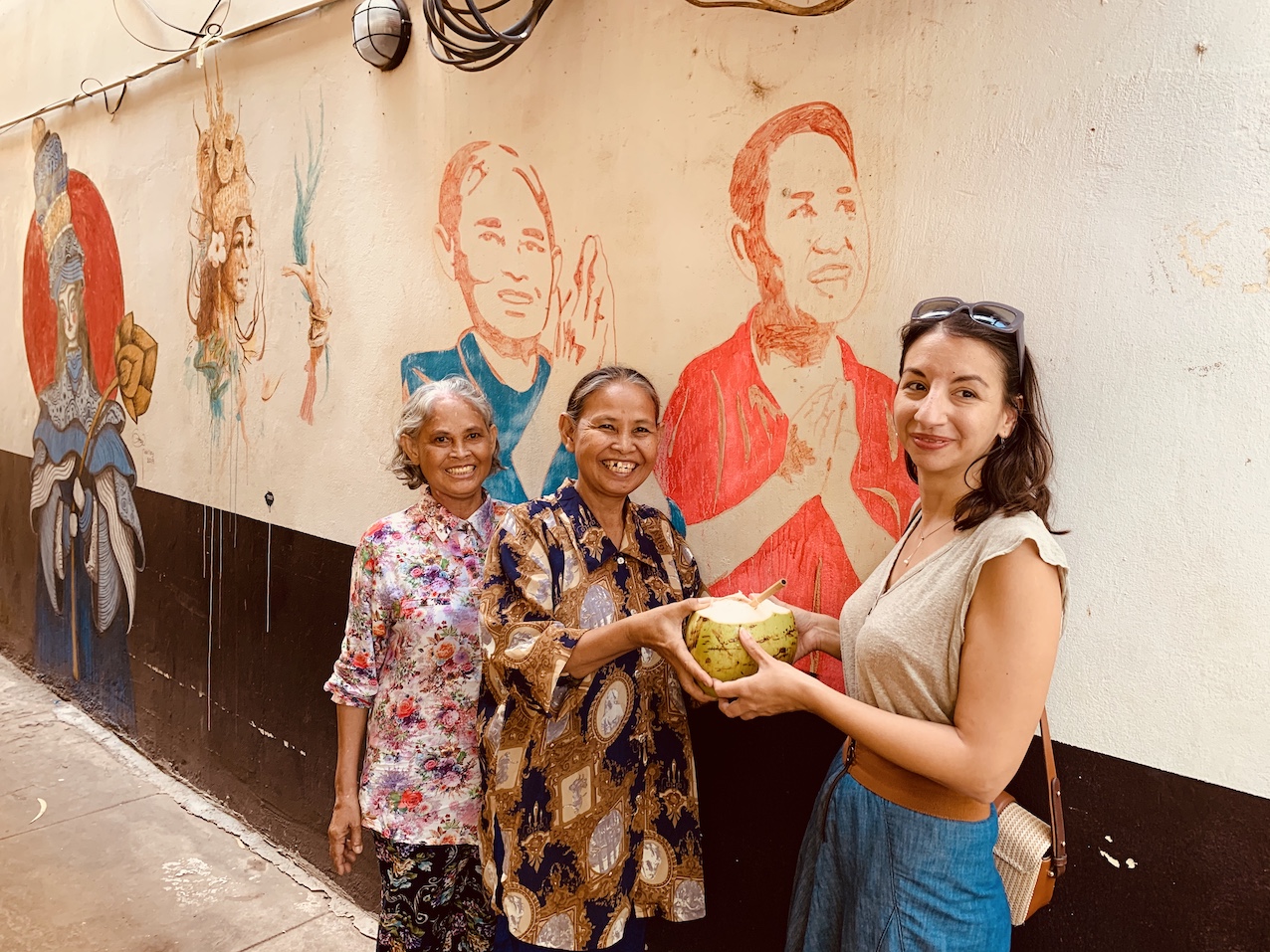 These women have been selling their coconuts here for years. When Tribe began decorating the alley with their murals, the women were initially wary. But before long they saw how beautiful it had become and realised the murals were drawing in customers. Heck, even Sladja found herself talked into buying a coconut. 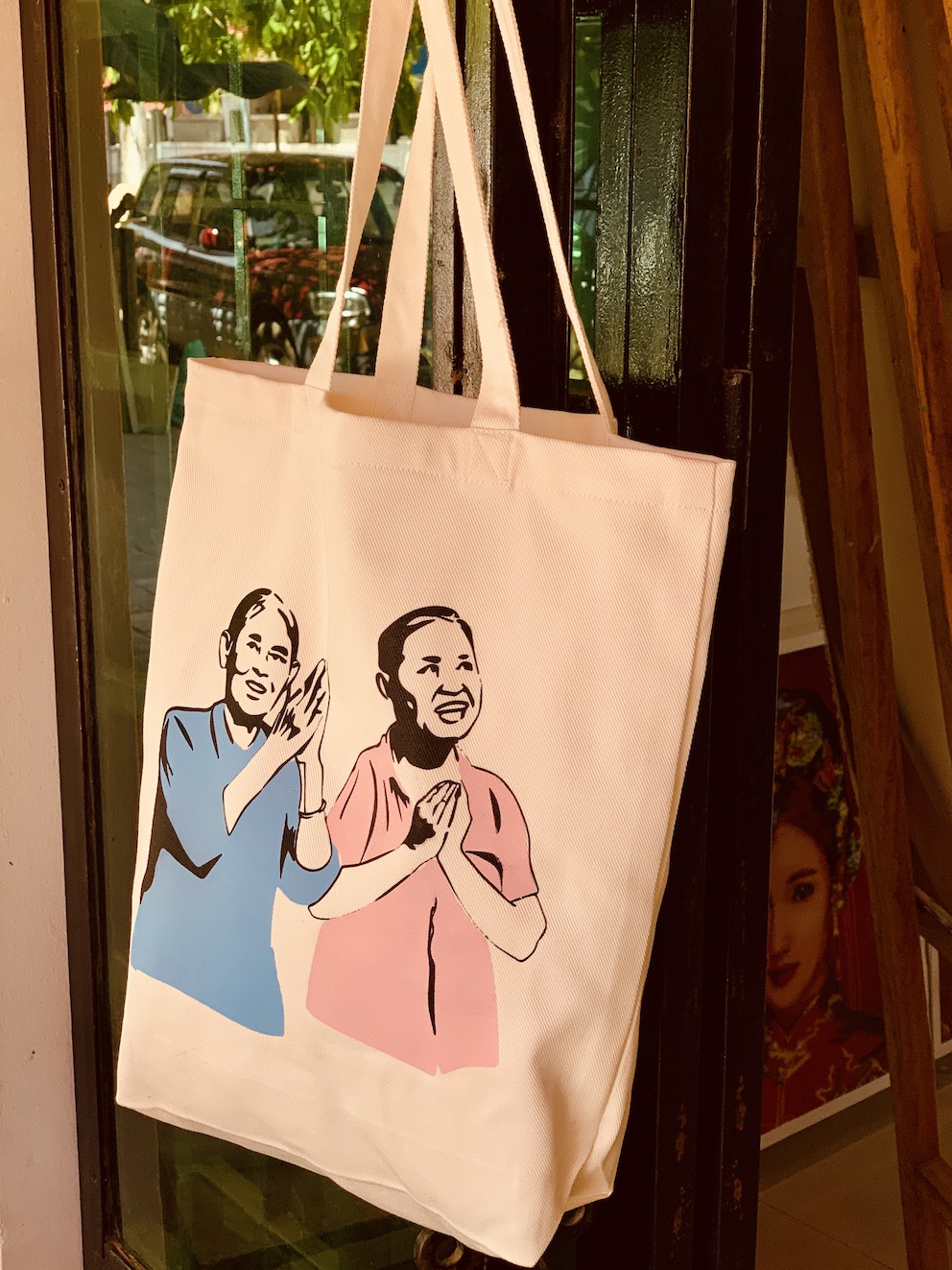 “Yay for Tribe! Have a coconut.”

Terry, Nat and the coconut women soon became firm friends. So much so, that the ladies themselves have been immortalised in an alley mural. You can even pick up a Coconut Ladies bag in the gallery! 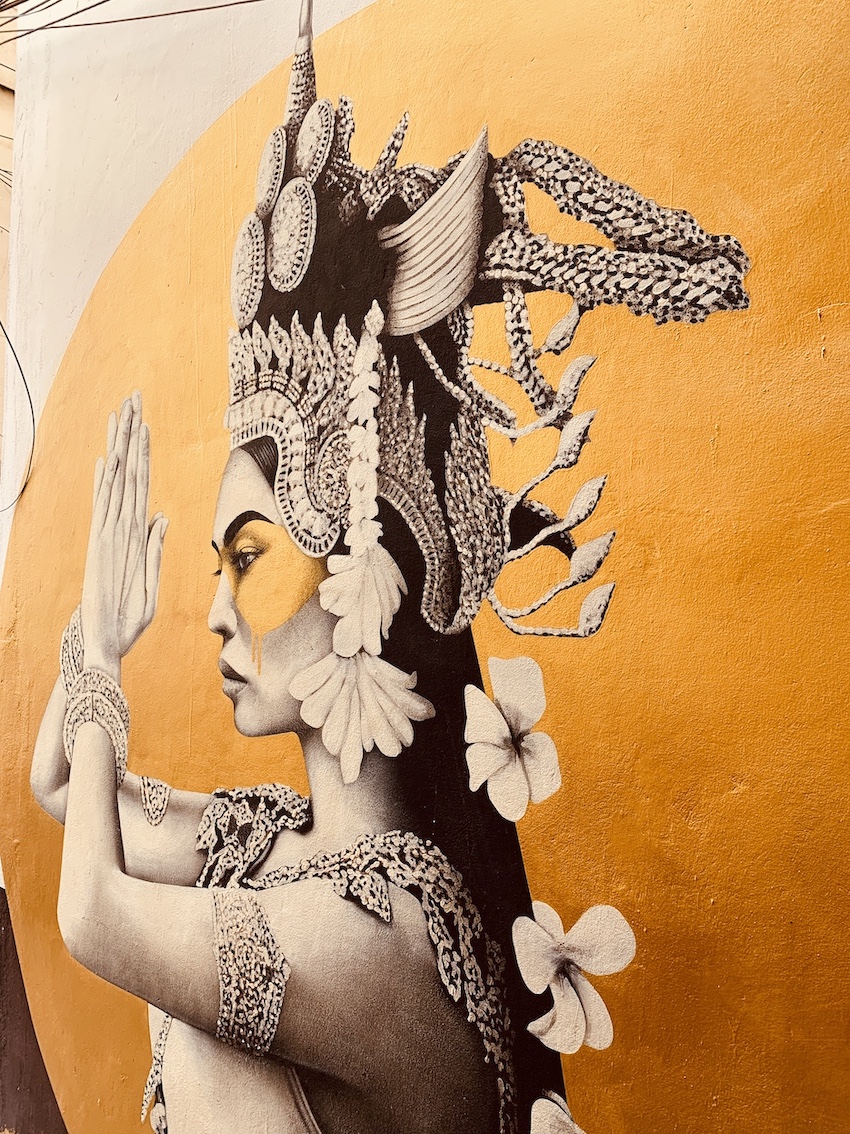 Furthermore, Coconut Alley showcases a striking mural from the acclaimed Irish artist Fin DAC. Thanks to Terry and Nat’s efforts, the London-based painter came to Cambodia to gift a number of murals across the country. His Coconut Ally creation is called Kandalis, which depicts a traditional Khmer Apsara dancer. 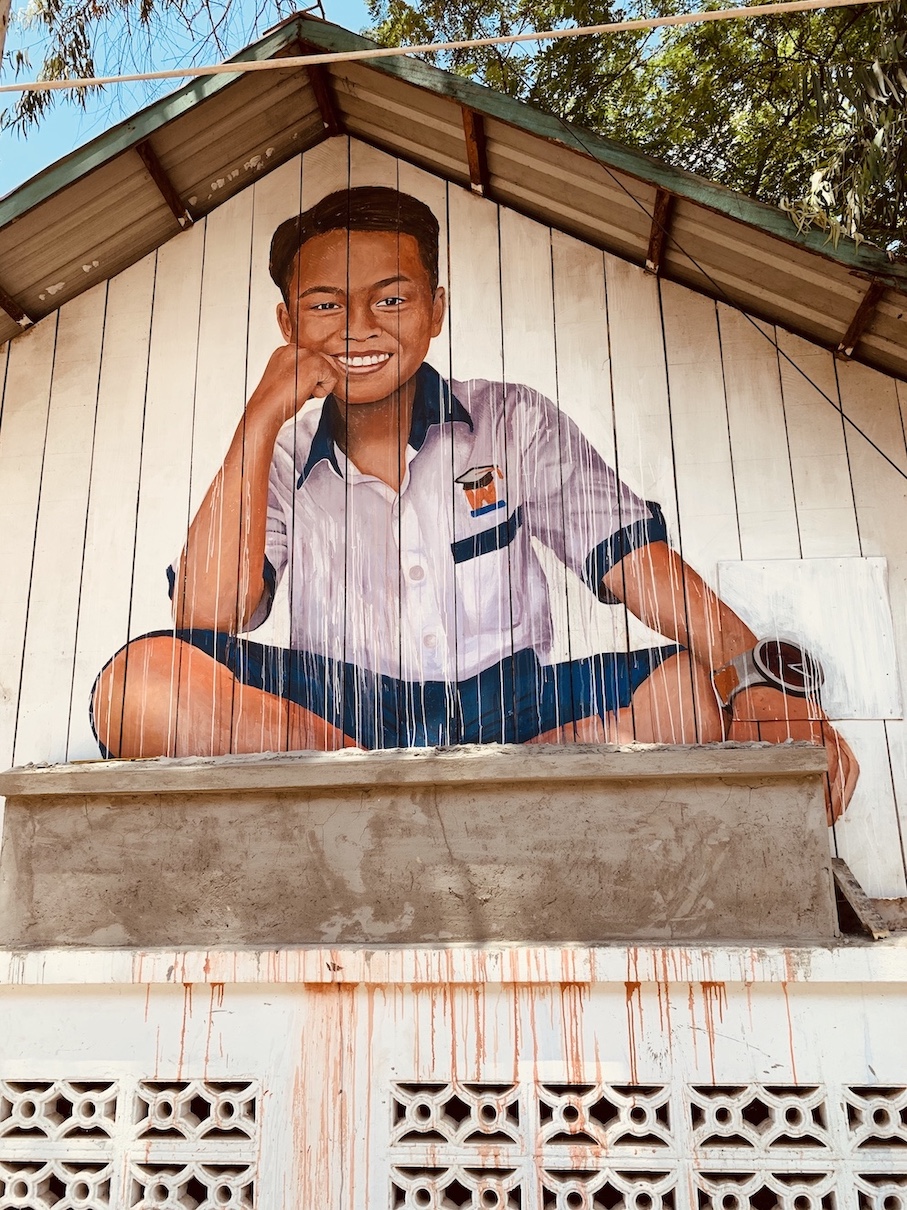 There are several other notable murals near Tribe. Of these, my favourite is this Siem Reap schoolboy by the artist Ben Slow. Modelled on a local boy who lives in the neighbourhood, the mural was added to the street in February 2020. The boy in question comes from a poor family, but is completely dedicated to his education. Terry told us how he studies daily from dusk till dawn and is learning both English and Chinese. 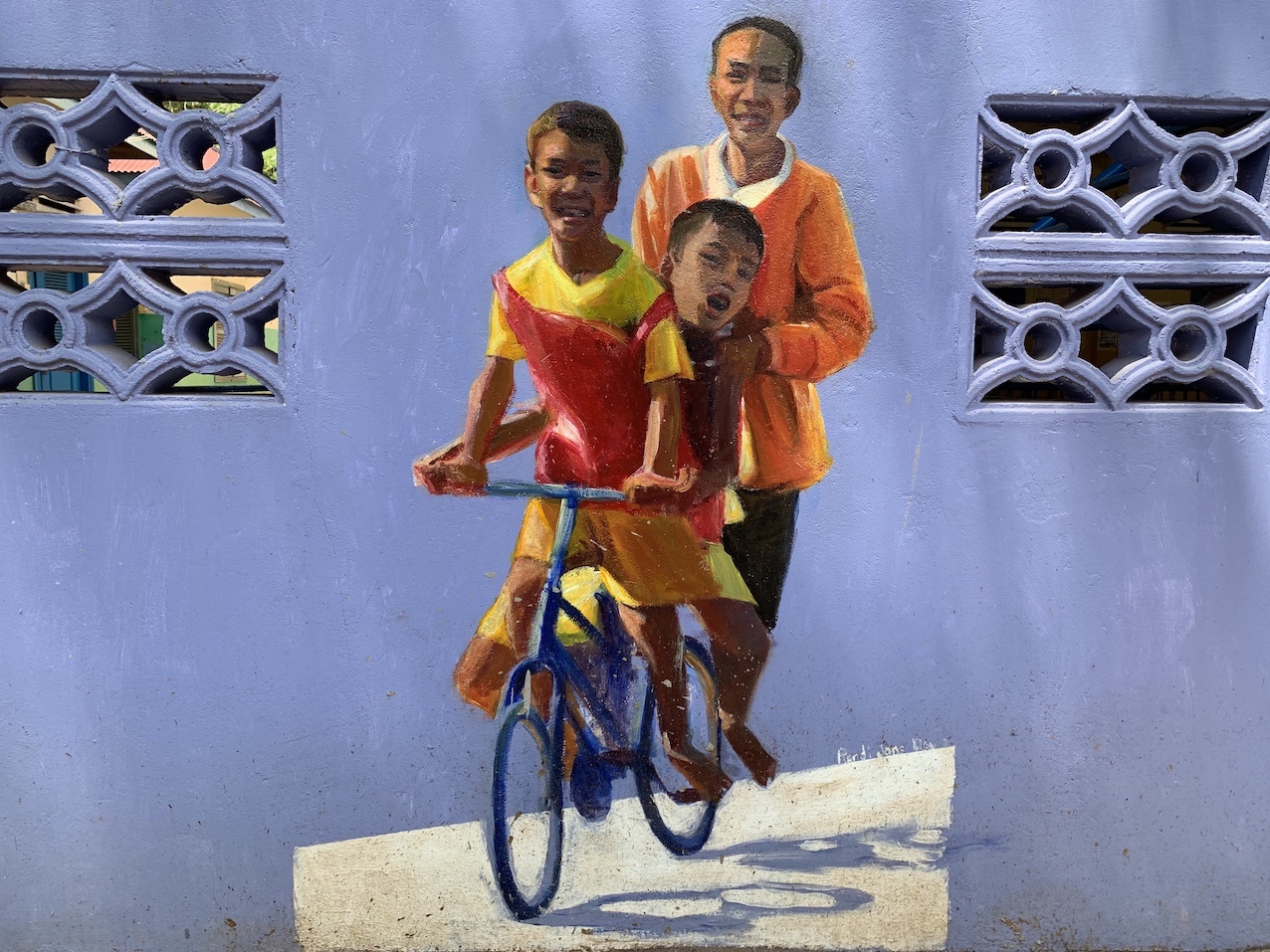 Terry and Nat have made quite a name for themselves in Siem Reap, not least due to their social work in the community. Several events they organised, for example, have raised significant funds for Phare Ponleu Selpak School, the NGO connected to Phare, The Cambodian Circus.

The British Ambassador to Cambodia is a Tribe fan too. In fact, she regularly helps out with various social projects and purchased a number of Nak Noy pieces for her private residence in Phnom Penh. 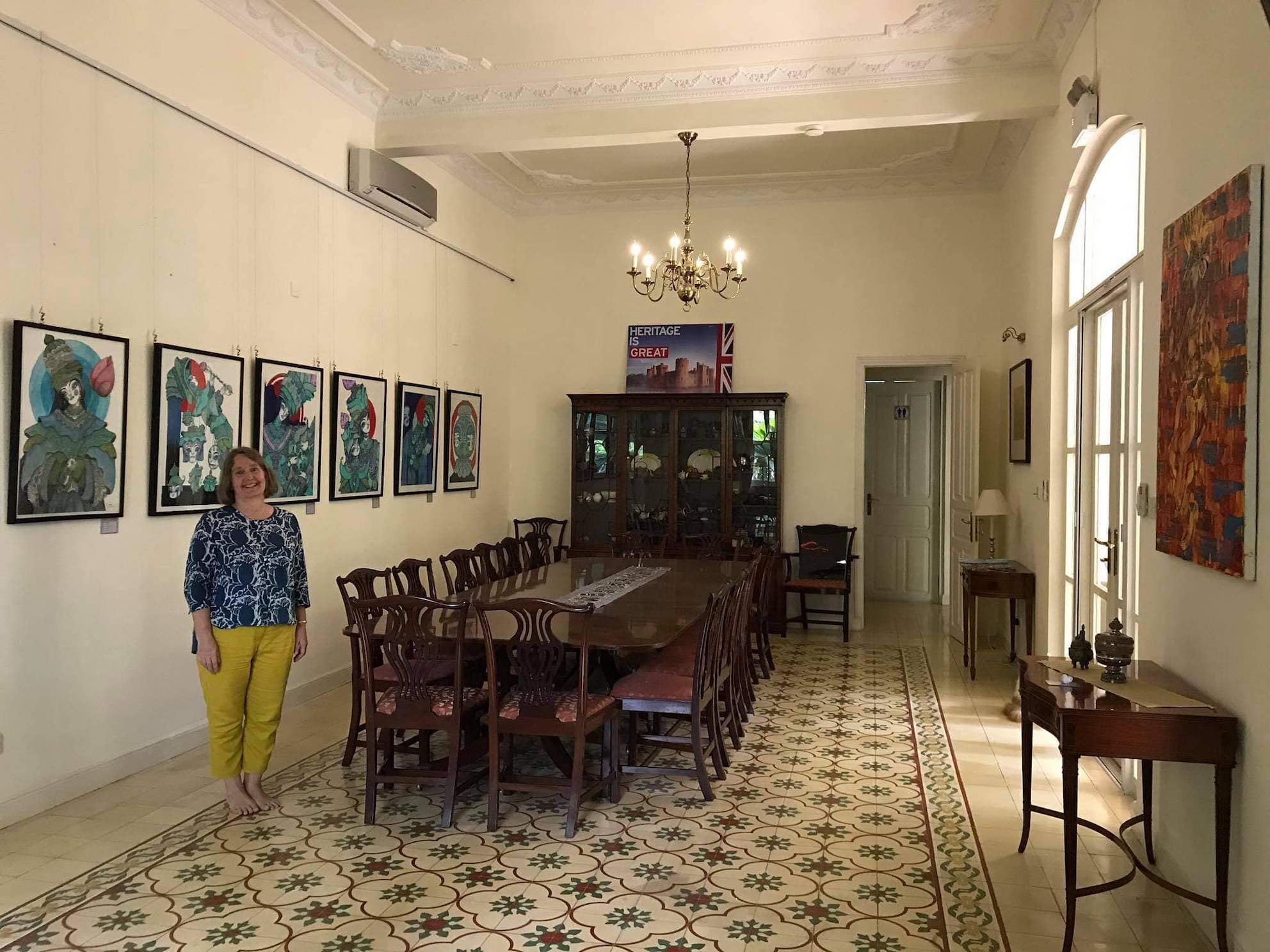 Just over a month after our visit to Tribe, we learned that Terry McIlkenny had suddenly passed away. It was Nat who broke the news on social media, with tributes pouring in for a man  “with a large heart” who was “a dedicated advocate of the arts”.

Despite being utterly heartbroken, Nat insists Tribe will continue in Terry’s honour. According to Nat, a big part of Terry’s life was helping others be happy and achieve their goals. As such, Nat has established the Terry McIlkenny education fund. I’m glad we got to meet Terry and will aways be grateful that he gave us a window into Tribe’s vivid world. Our condolences go out to Nat, Terry’s loved ones and the extended Tribe family. 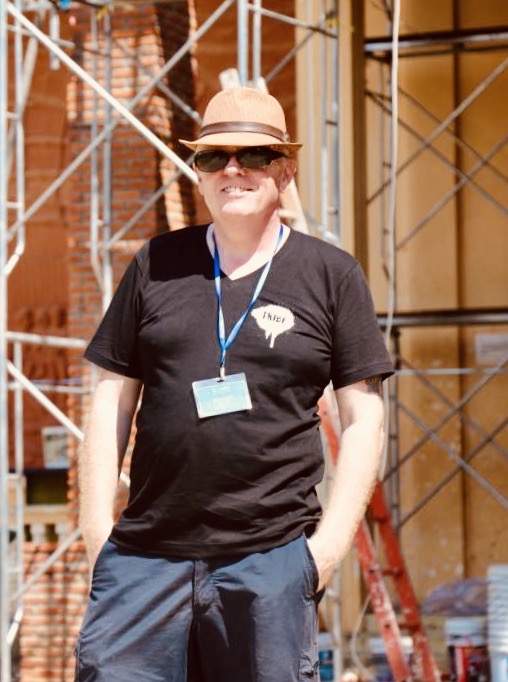 UPDATE: In February 2021 Nat decided to relocate Tribe Art Gallery to the Cambodian capital, Phnom Penh. The decision came about due to the sadness of Terry’s passing and the general lack of tourist action in SR. Both Sladja and I wish Nat and Tribe’s many artists all the best in their new venture. 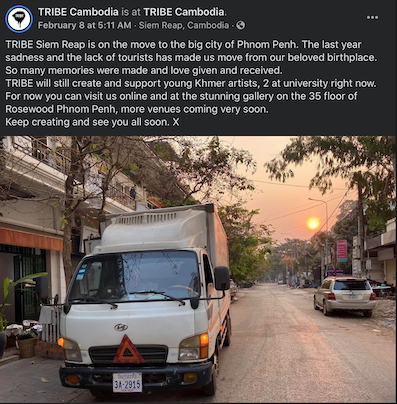 For more on Tribe Art Gallery, head to their Facebook page.