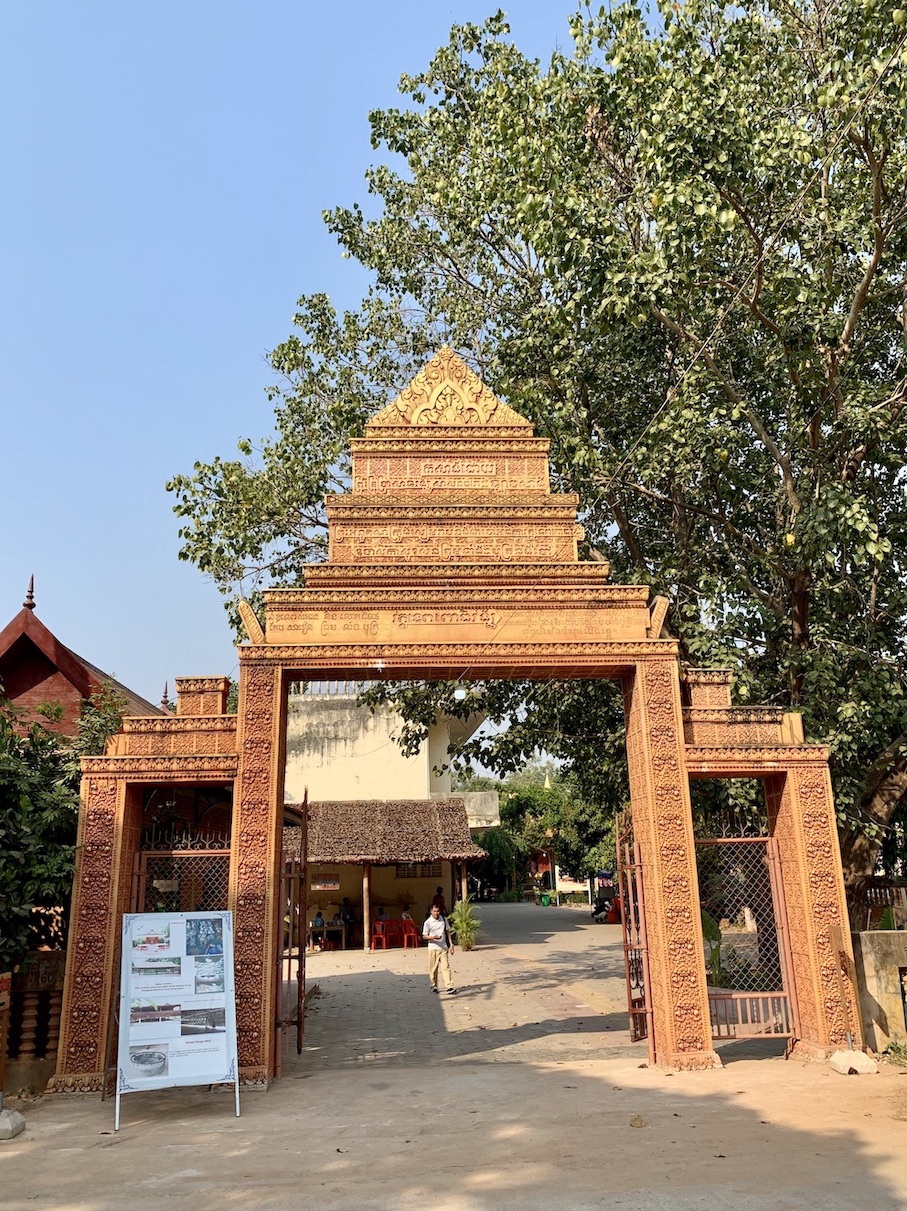 January 2020. Back in 2015 my old travel buddy Wonderboy and I spent a day in Phnom Penh learning about Cambodia’s harrowing genocide years.

Firstly, we spent a few grim hours visiting Tuol Sleng Genocide Museum, a Khmer Rouge detention and torture centre. Then, we headed out to the equally awful Cheoung Ek Killing Fields, where thousands of innocent Cambodians were finally put out of their misery. 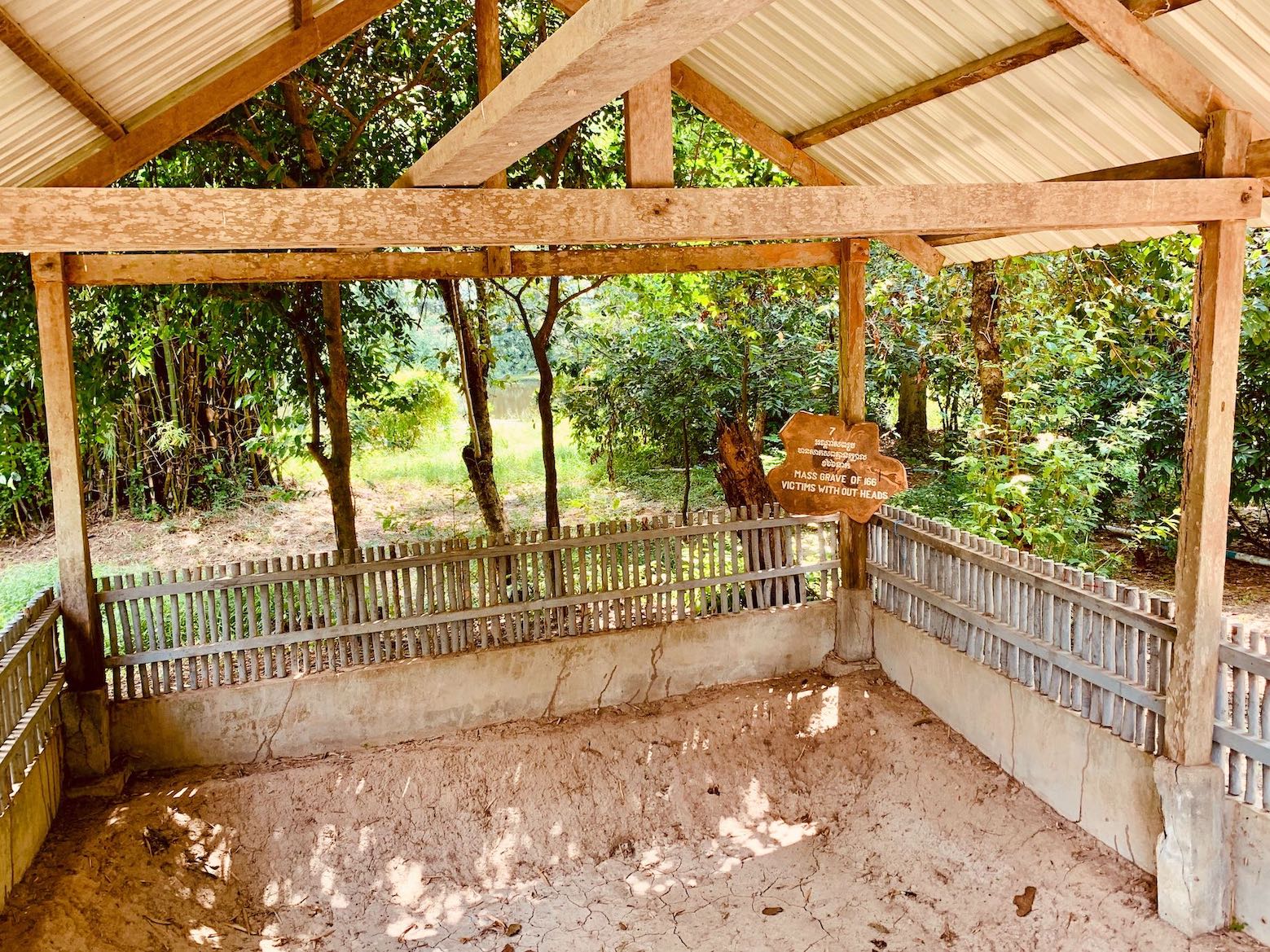 It was one of the most depressing travel experiences of my life, but one that I knew I had to have in order to better understand the country and its people.

I hadn’t been aware that Siem Reap had its own killing field site. With a heavy heart, Sladja and I entered one January afternoon through the modest stone gate. 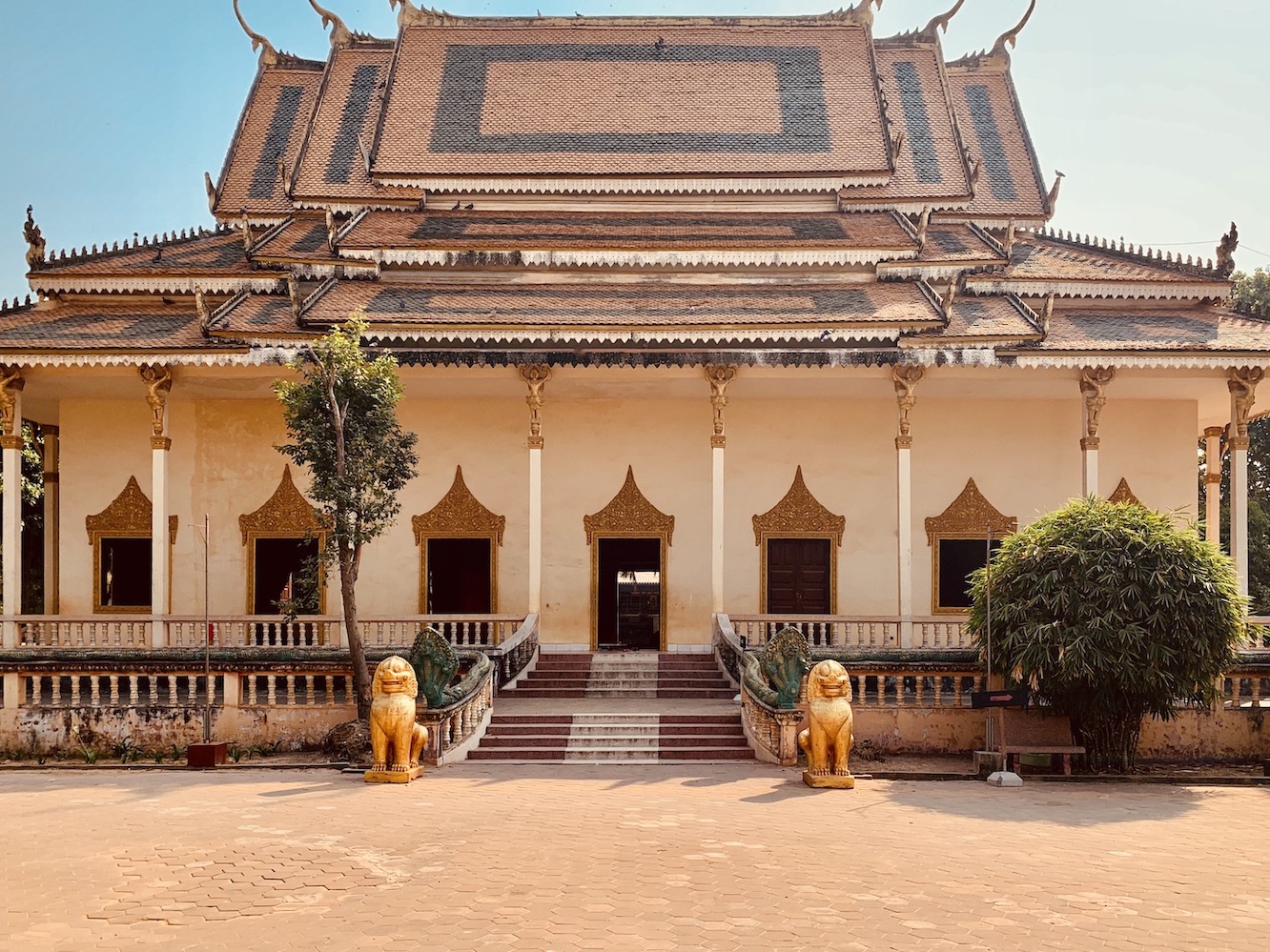 Although often advertised as the Siem Reap Killing Fields, there’s no actual field to see anymore. Instead, the compound honours those who died here through a number of exhibits. These tributes are scattered around the grounds of Wat Thmey Pagoda, a modern temple and home to a community of Buddhist monks. 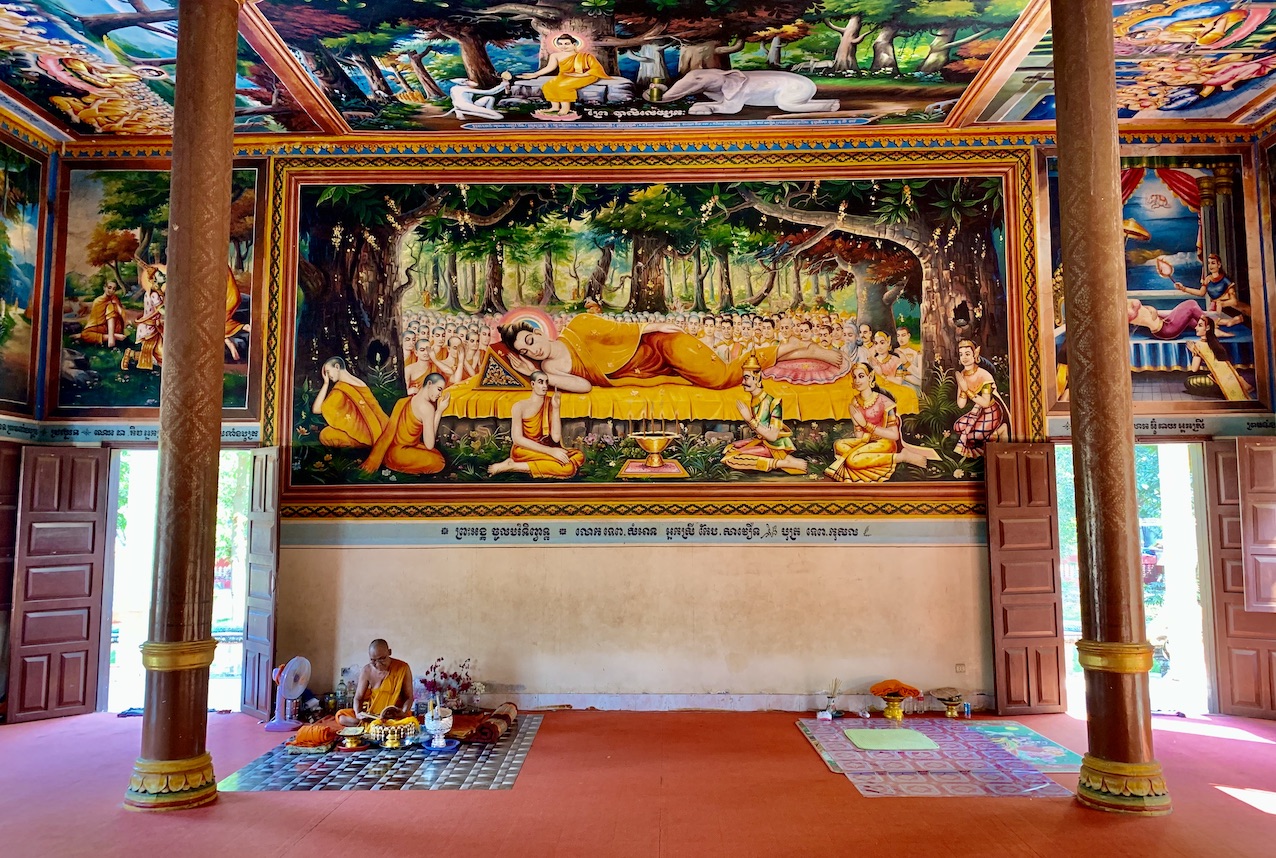 The pagoda itself is pretty enough but unremarkable, particularly if you’ve been around Asia’s temple scene. Most visitors to Wat Thmey come specifically for the genocide memorials, hence the prayer hall itself often gets ignored. And so it proved that day, as I ducked inside to find the place empty, save for a lone monk quietly reading. 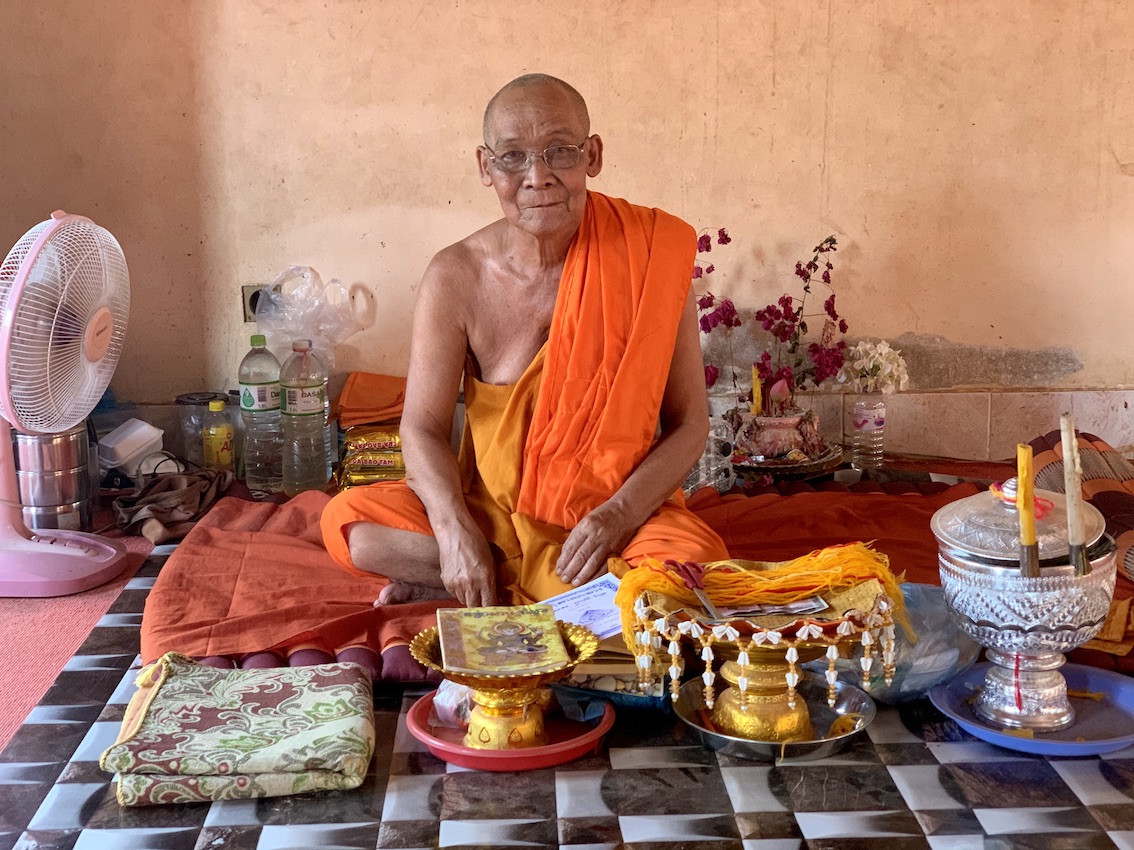 One of Wat Thmey’s residents monks.

Nevertheless, the monk seemed pleased to see me. Despite not speaking any English, he beckoned me over with a warm smile and posed for a photograph. A lovely moment in an otherwise sobering visit. 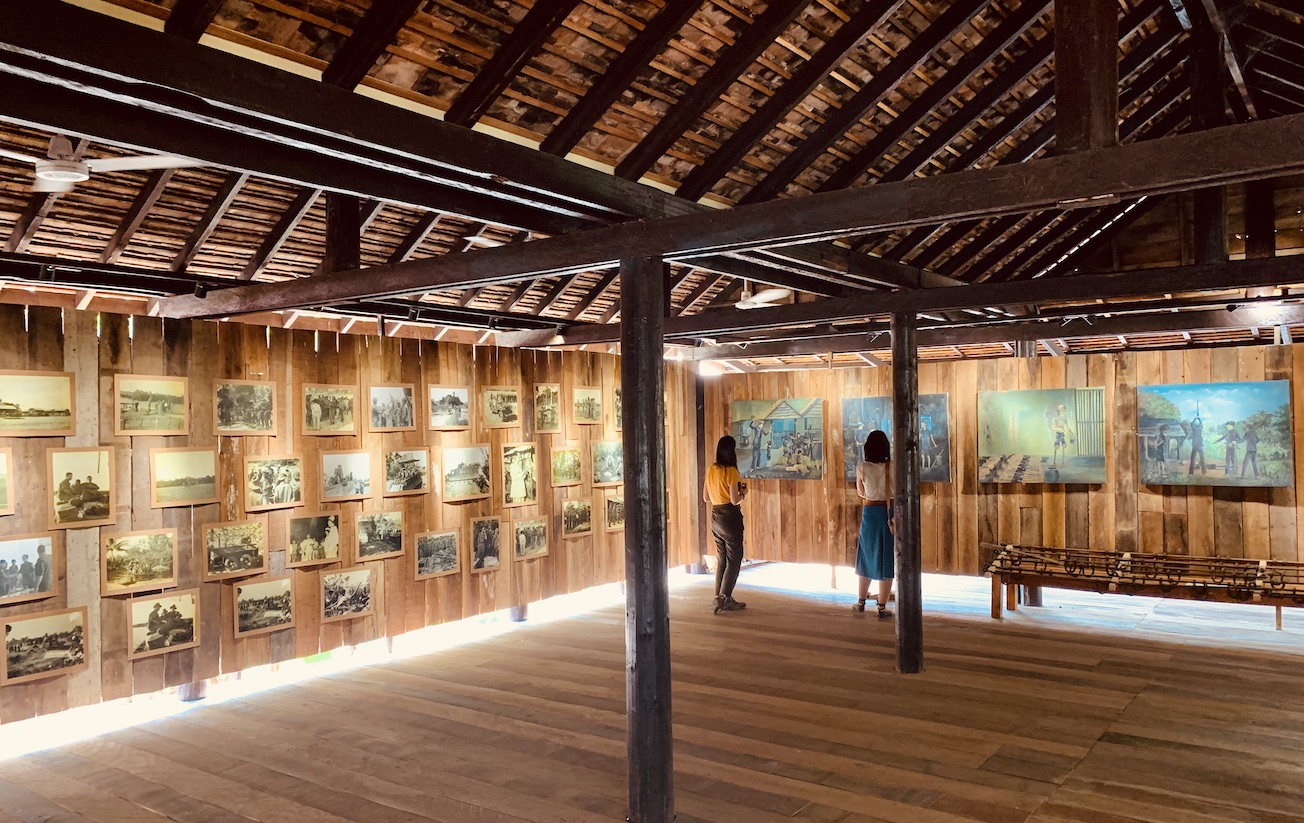 We kicked off our self-guided tour of the site’s genocide history with a modest but tastefully curated photo exhibition. Sadly, most of the photographs have no commentary or labels, thus we weren’t blessed with much context.

Still, they certainly highlight the horror of the times. Particularly those images of ragged, displaced children and soldiers digging graves in the rain. 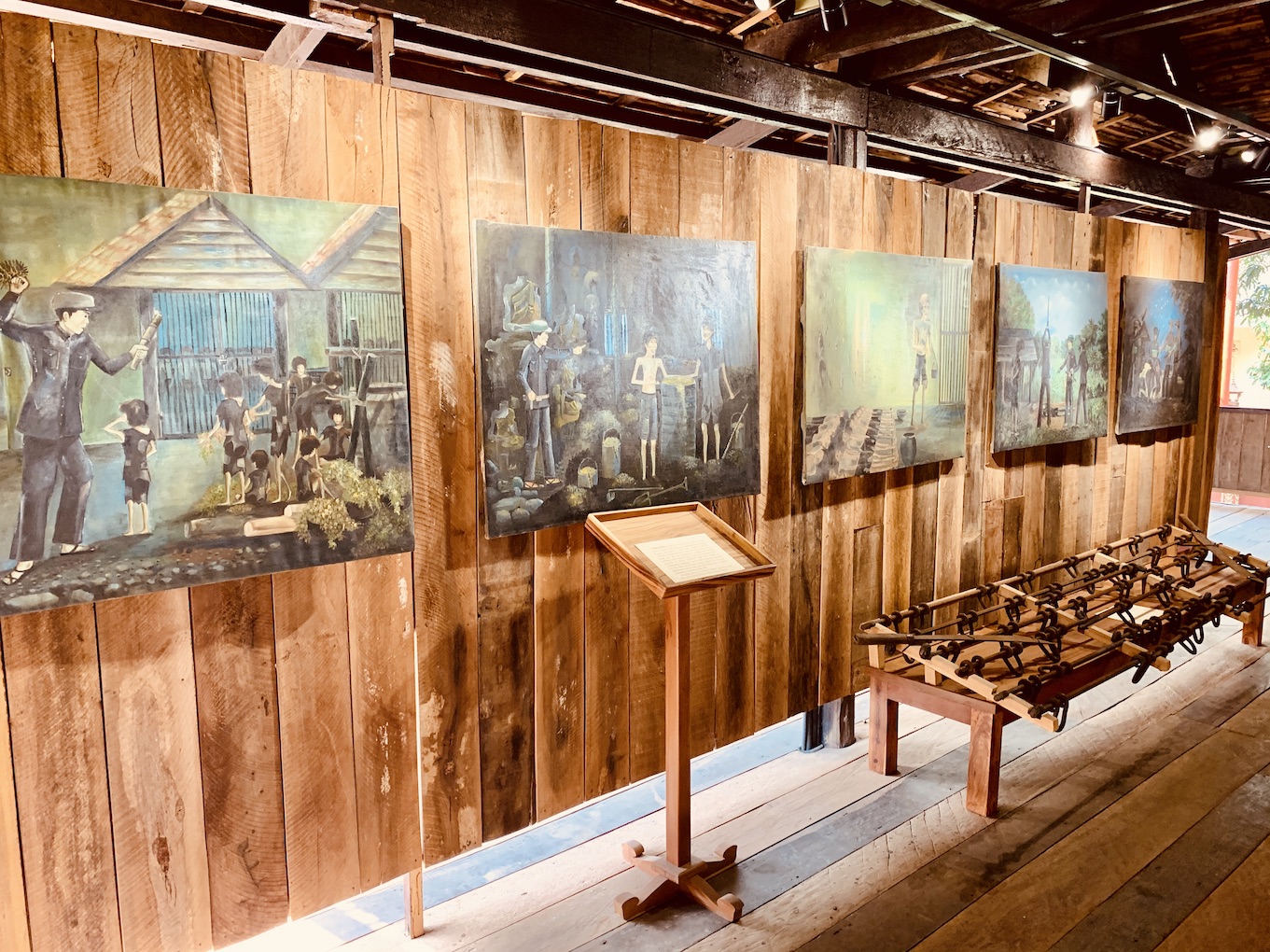 On the back wall stands an exceptionally disheartening collection of paintings. There are five in total and they tell the life story of Sum Rithy, apparently the only survivor of the Siem Reap Killing Fields. He was 21 when Khmer Rouge soldiers brought him here in 1976. 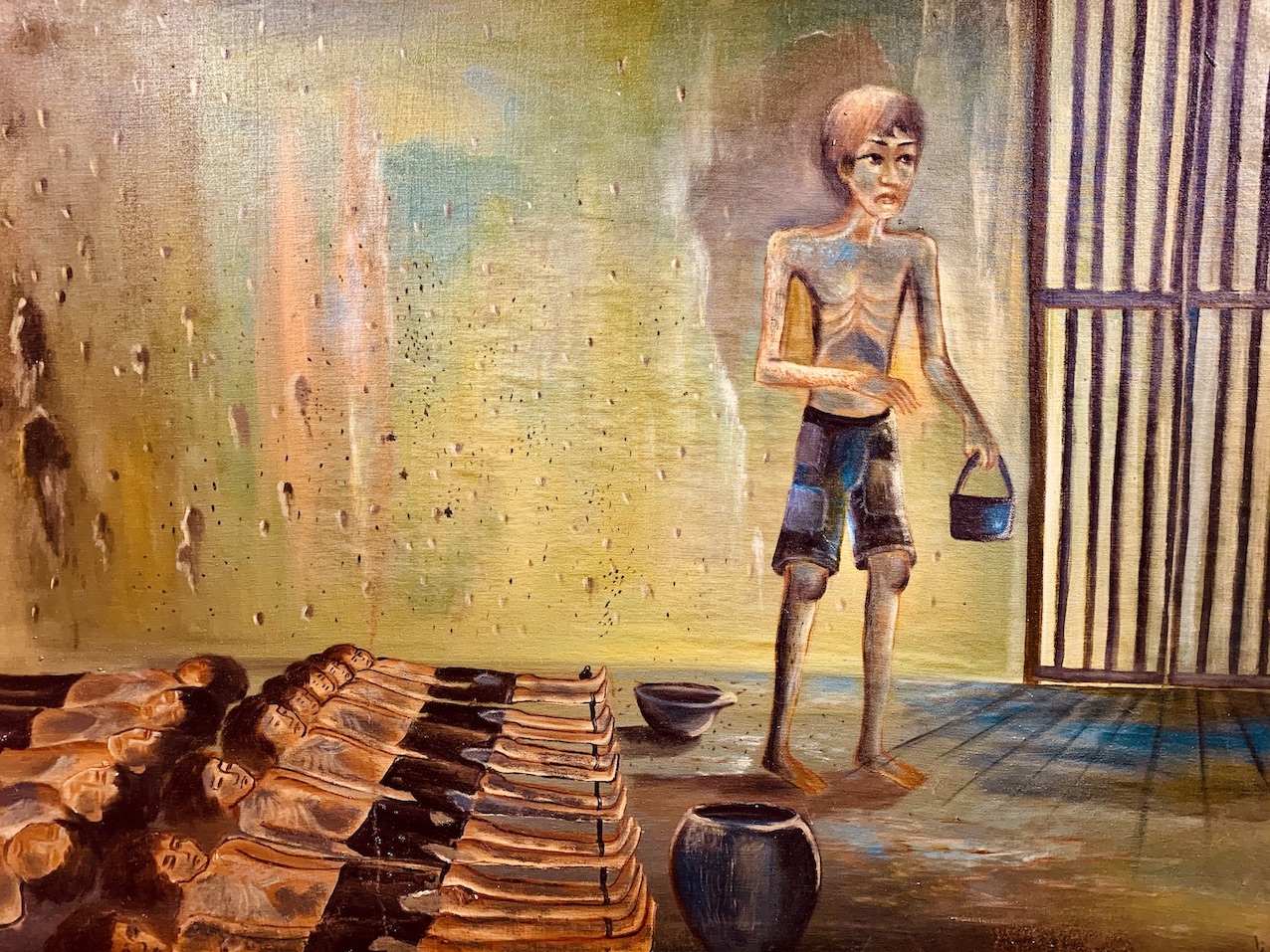 Accused of being a CIA spy, the soldiers subjected Sum Rithy to appalling torture, including burning him with boiling porridge and forcing him to eat his own excrement. He survived due to the fact that he was a skilled motor mechanic, and therefore useful to one of the soldiers. 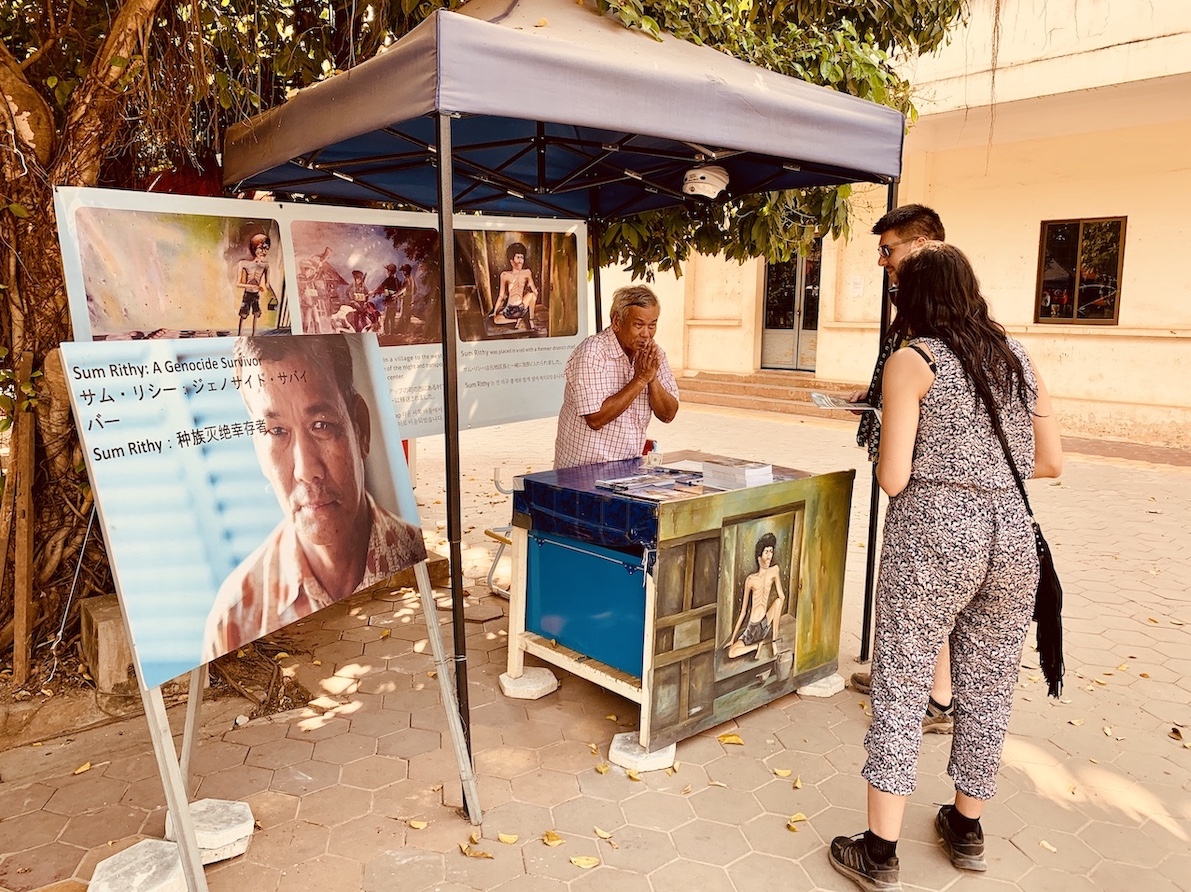 Sum Rithy is now in his 60s and spends a great deal of his time stationed at Wat Thmey Pagoda. He greets visitors, agrees to photographs and signs copies of his book, Surviving the Genocide in the Land of Angkor. 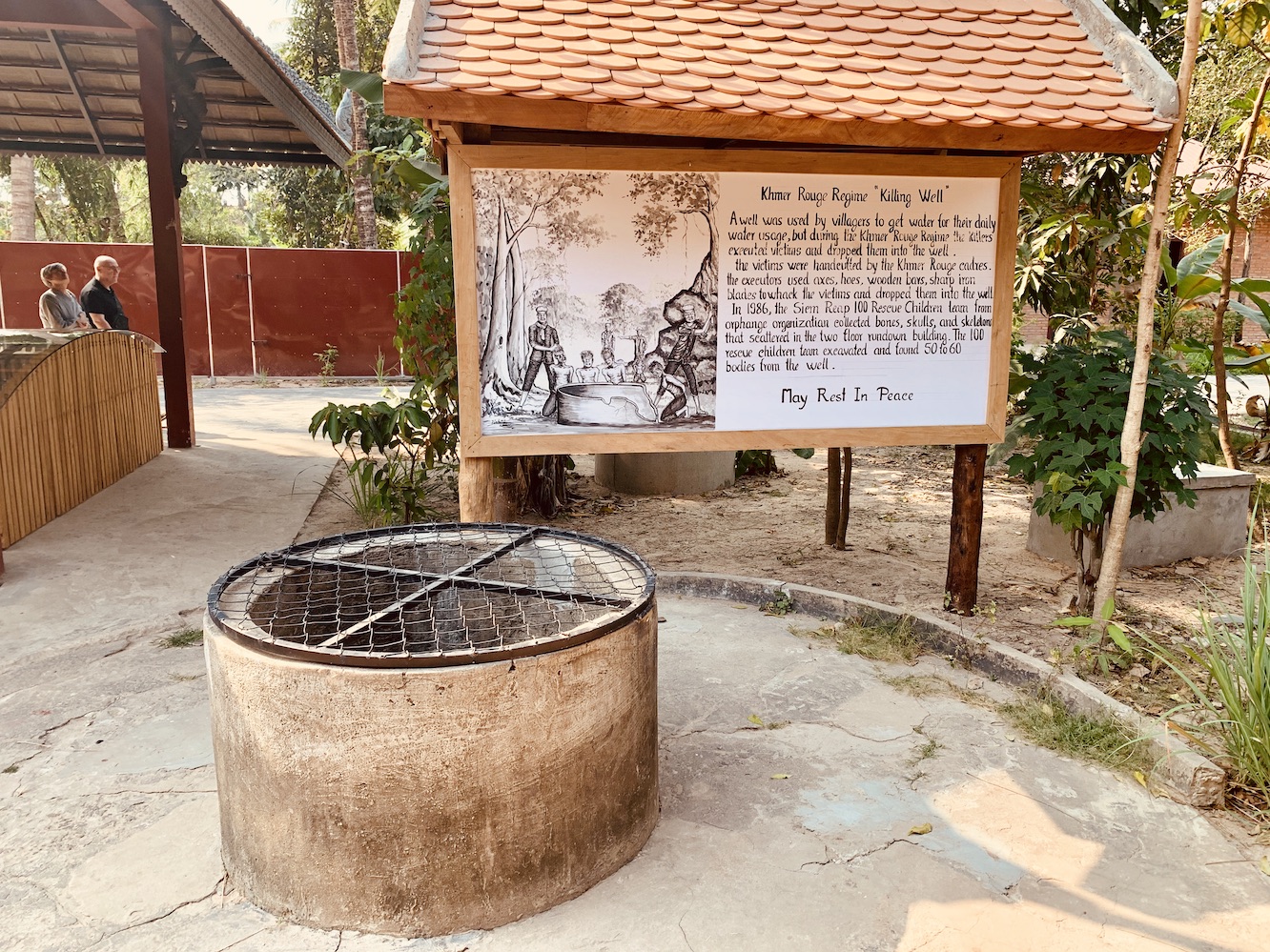 Outside the exhibition hall stands the Killing Well. I won’t go through what happened to people before the soldiers dumped their bodies into the well. In 1986 a local NGO organised a search mission, which resulted in the recovery of around sixty skeletons. 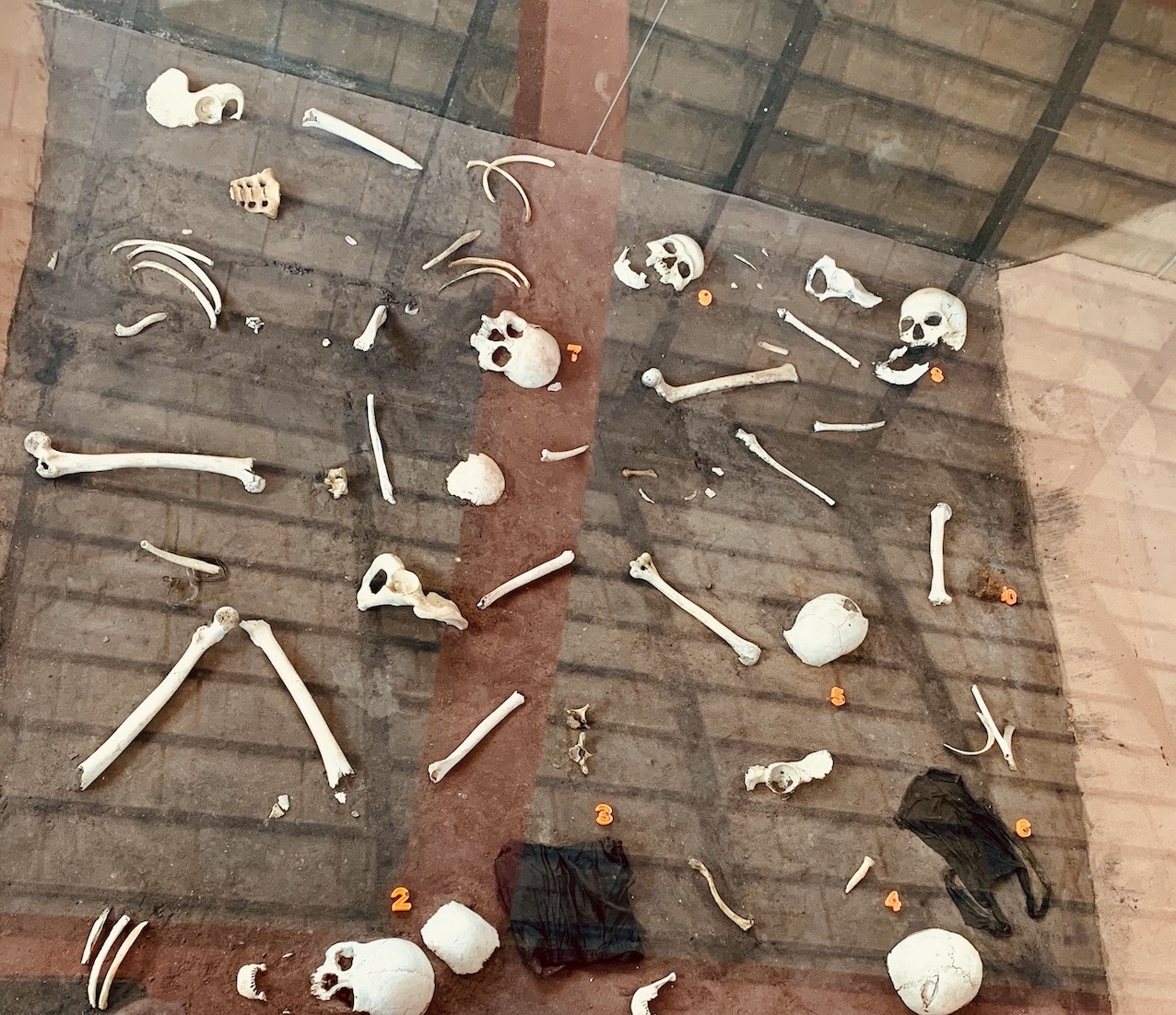 A further twenty three bodies were found at a nearby mass grave. Some of the remains rest in a large, glass case next to the well. 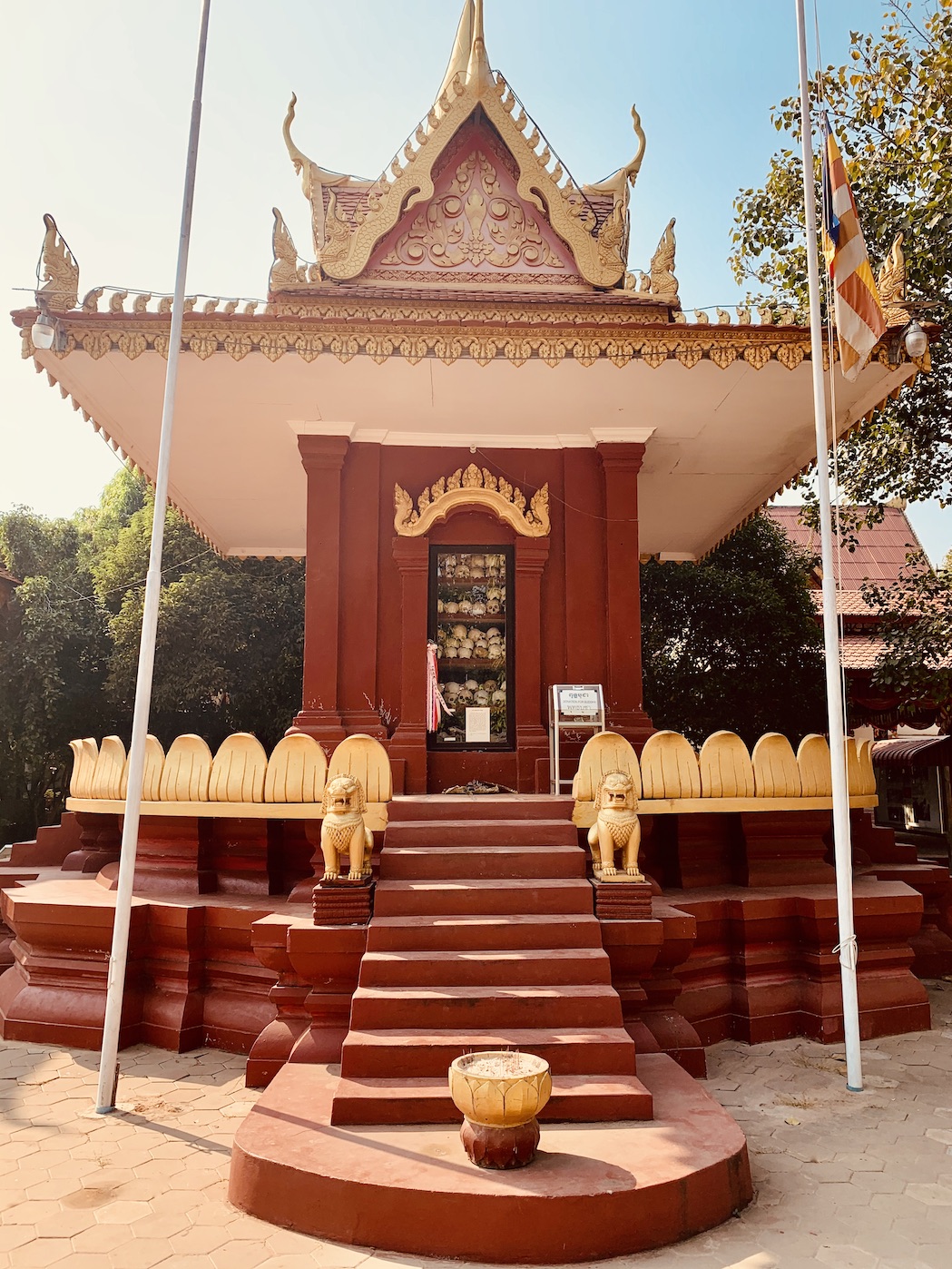 As with the Choeung Ek Killing Fields in Phnom Penh, the Siem Reap site features a haunting memorial stupa. Fitted with glass windows, it displays the skulls and bones of 890 victims. I saw a few Khmer visitors dropping monetary tributes through slits in the glass. 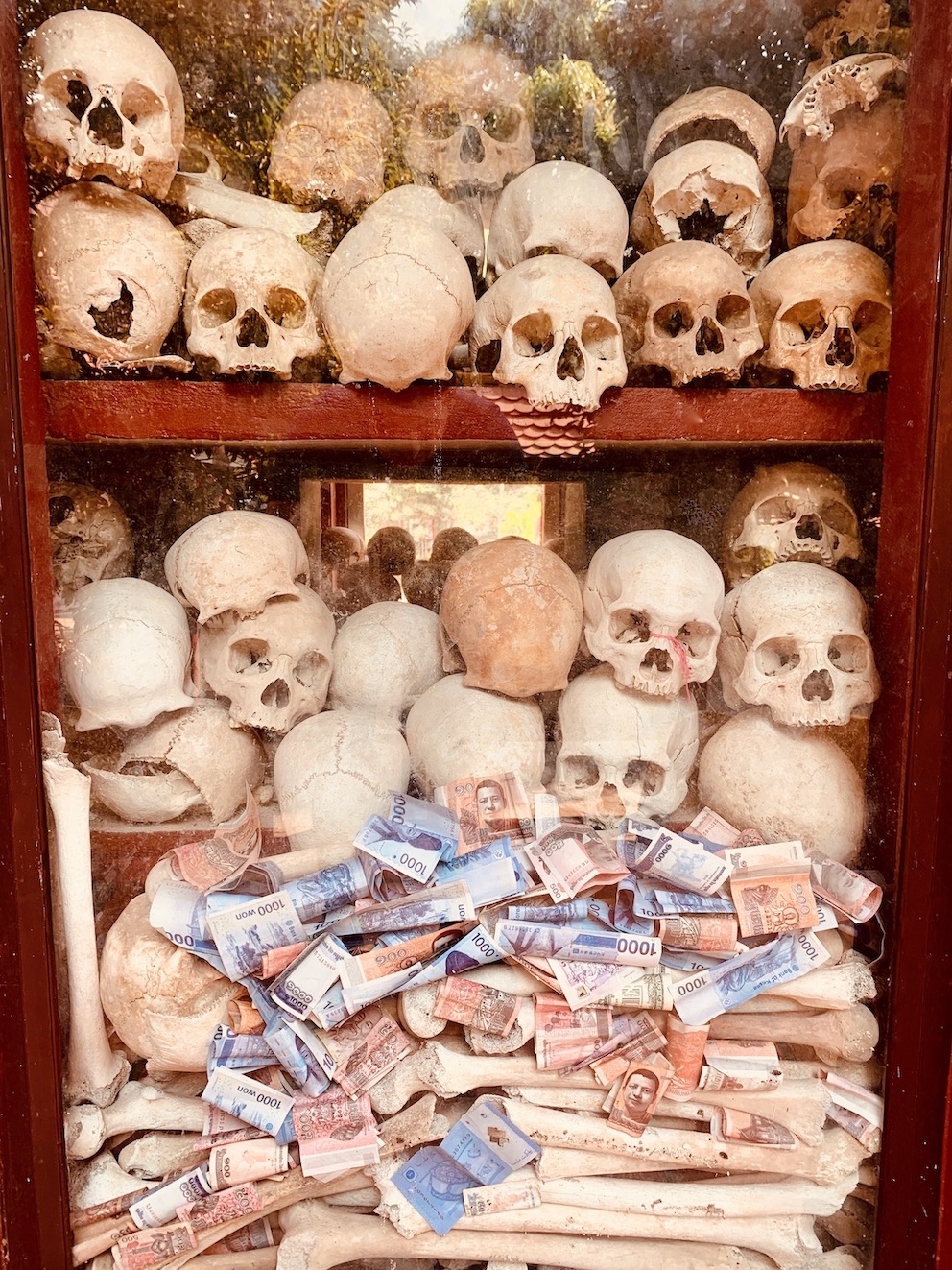 On the way out, I stopped in my tracks at the sight of a chilling photo board. The main image shows Pol Pot (front left) and his closest cadres riding the rail network in 1976. There was something about Pot’s calm and thoughtful expression that sent a shiver down my spine. 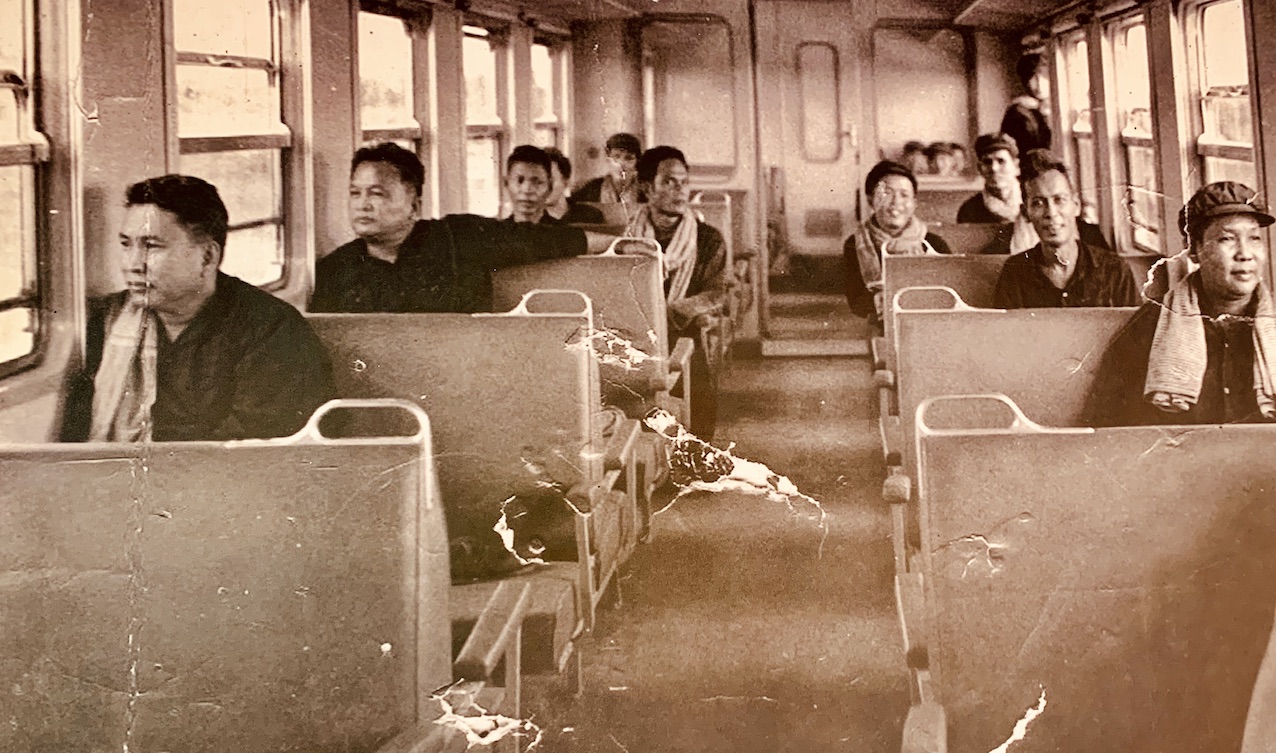 An accompanying blurb says the photo was staged for propaganda purposes. Before long, these men would repurpose the rail system to transport thousands of Cambodians to forced labour camps.