We were into our last few days in Siem Reap when Sladja and I realised we still had an unticked box on our to-do list. Back in my 2015 SR days I embarked on a half day trip to Kampong Phluk, one of several floating fishing villages out in the countryside. Seeing those remarkable stilted houses and observing the people’s traditional lives had been a special experience.

Happily, Sladja was up for seeing a Cambodian fishing village herself. Not wanting to simply go back to Kampong Phluk, we got some advice from Ai Mei Travel in the city and consequently settled on another floating community, Kampong Khleang.

The village pagoda at Kampong Khleang.

Hiring a driver for the day, we made the 55km journey from central Siem Reap in just under an hour and a half. Our driver pulled up at the edge of the river on a large stone square, home to a handful of wooden houses and a large, striking pagoda.

“Where are you from?”

Our arrival certainly raised some eyebrows among the locals. One man, leaning over the balcony of his impressive stilt house, shouted questions down to our driver. Who were we? Where did we come from? How come we hadn’t fled Cambodia, like all the other tourists?

We also found ourselves surrounded by a group of curious children and a scruffy dog. They whooped and cheered, they cried hello and in the case of one boy there was even a blown kiss. I guessed not many people had popped in during the tourism apocalypse months of April, May, June and July.

They were particularly delighted when I treated them to a handful of change in Cambodian Riels. And they wasted no time whatsoever in scurrying off to a nearby store shack to buy candy and soda.

The village square sits on a hill overlooking a pretty river, which provides local fishermen with easy access to Tonlé Sap Lake. I was surprised to learn that Kampong Khleang is the largest floating village in Siem Reap Province. In fact, there are around ten thousand residents spread out across numerous huddled communities. Due to seasonal flooding, all the homes here are towering wooden stilt houses.

In the rainy season the families here concentrate on fishing for a living. In the dry season they turn their hands to farming. Fruit and veg is the order of the day, with an emphasis on snake beans and watermelon. Although our visit came during the rainy season (May to November), our driver explained that large sections of the river had dried up altogether because of unusually low rainfall.

As a result, the locals have had difficulties getting out onto the lake. Moreover, the lack of water meant it wouldn’t be possible to take a boat tour, one of the great joys of a visit to Kampong Khleang. The low rainfall, along with the effects of COVID-19, have brought seriously tough times to the village.

Usually, visitors can book village tours through Community First, a not-for-profit organisation that reinvests all income into local educational programs. COVID forced them to close their doors in April, although I’m happy to report they reopened in early September.

With most of the river dried up and no boat tour possible, we made do with a self-guided stroll around the village. Following a dirt path towards the main street, we came across a couple of small boat homes.

This tiny wooden vessel belongs to a family of four. From my very brief peek inside, I spied a small stove and bamboo mats for beds. For calls of nature, I’m guessing they use the same couple of public toilets as everyone else.

The Main Street is huge! Much like the one at Kampong Phluk, there’s nothing to see except for the stilt homes themselves. Reactions to our presence were mixed. Adults generally looked upon us suspiciously, while there was even a scowl from one mother cradling her baby from an upper balcony. 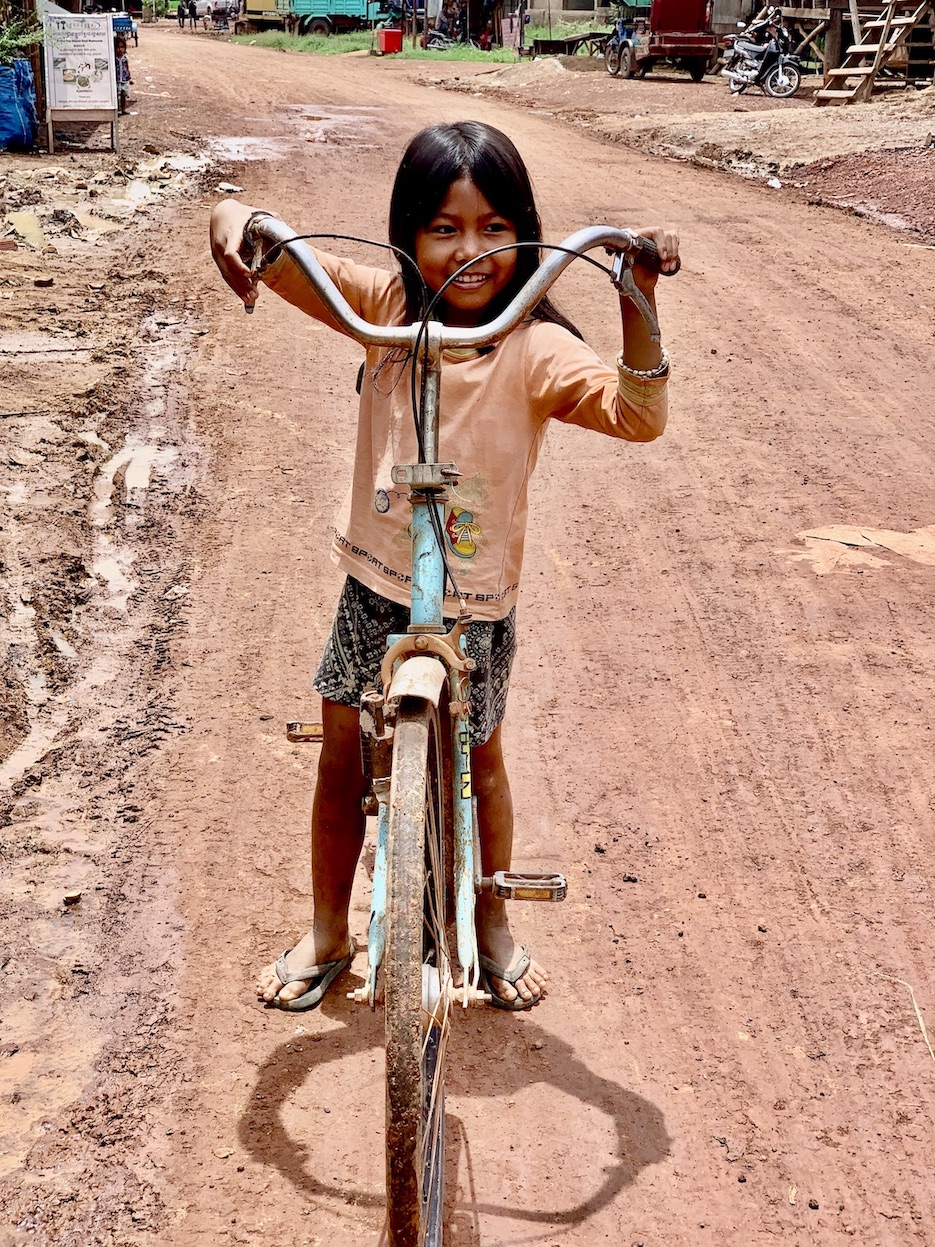 The children on the other hand continued to be overjoyed to see us. One tiny girl came pedalling over on her giant bike. Upon reaching us she was happy just to grin, no exchange of words necessary. 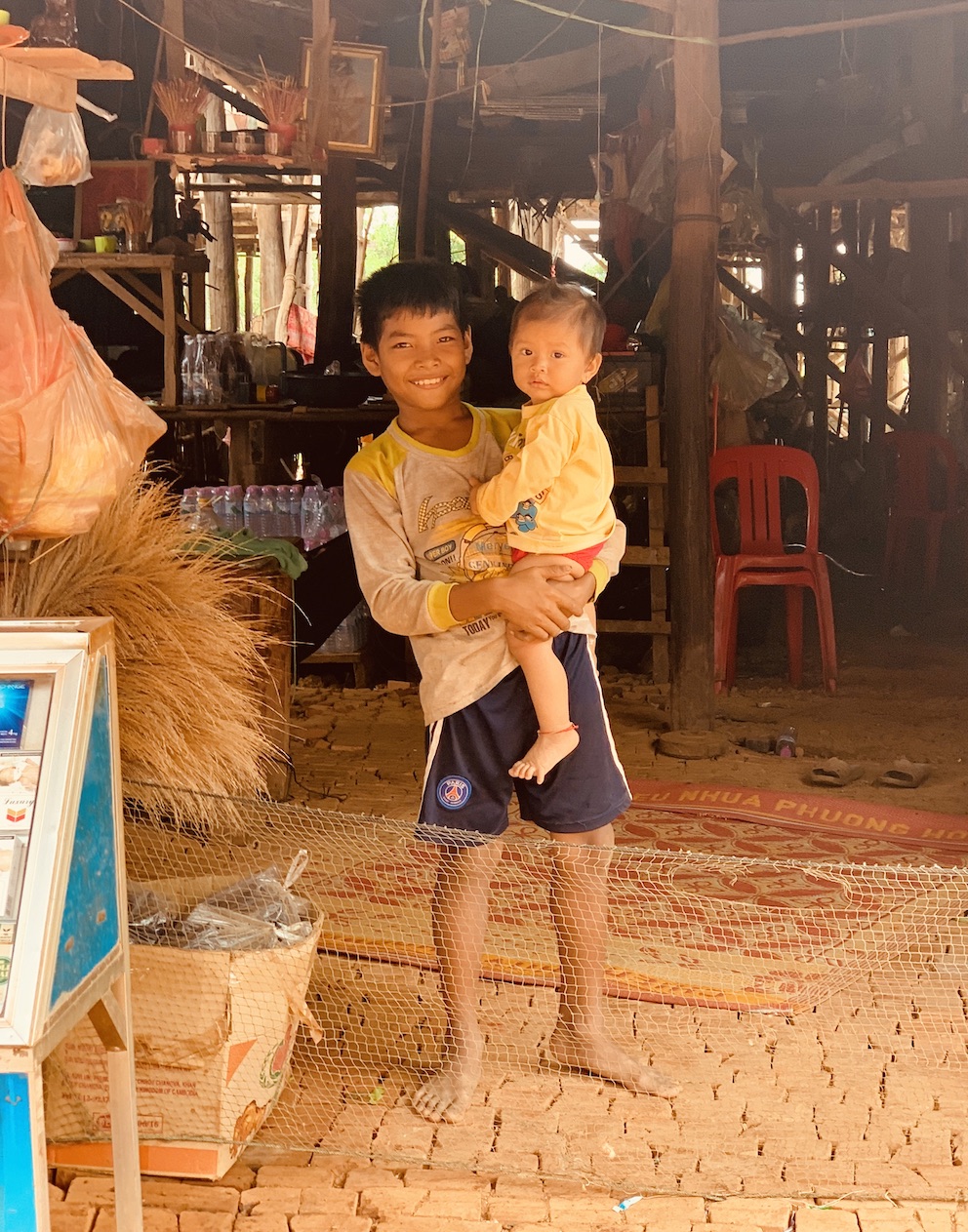 This young boy came out to greet us, his baby brother clutched in his hands. There was no sign of mom or dad. Another set of brothers were hanging out at home in their hammocks when we walked past. Upon spotting us they shot up with wide smiles and alert eyes. Then took the crumpled wedge of notes I gave them to a nearby barbecue grill selling chicken skewers.

Most memorably of all, we came upon a gaggle of children dancing to some truly godawful techno music blasting out of a giant speaker. Registering our delight, one of the girls began ramping up her performance with flailing arms and legs. It was impossible not to clap and laugh along.

Elsewhere, we came across a weaver working on a giant bamboo mat. A sizeable group of onlookers had gathered around to watch him. One of the young boys seemed to be in training, a few of the elders presumably with nothing better to do. 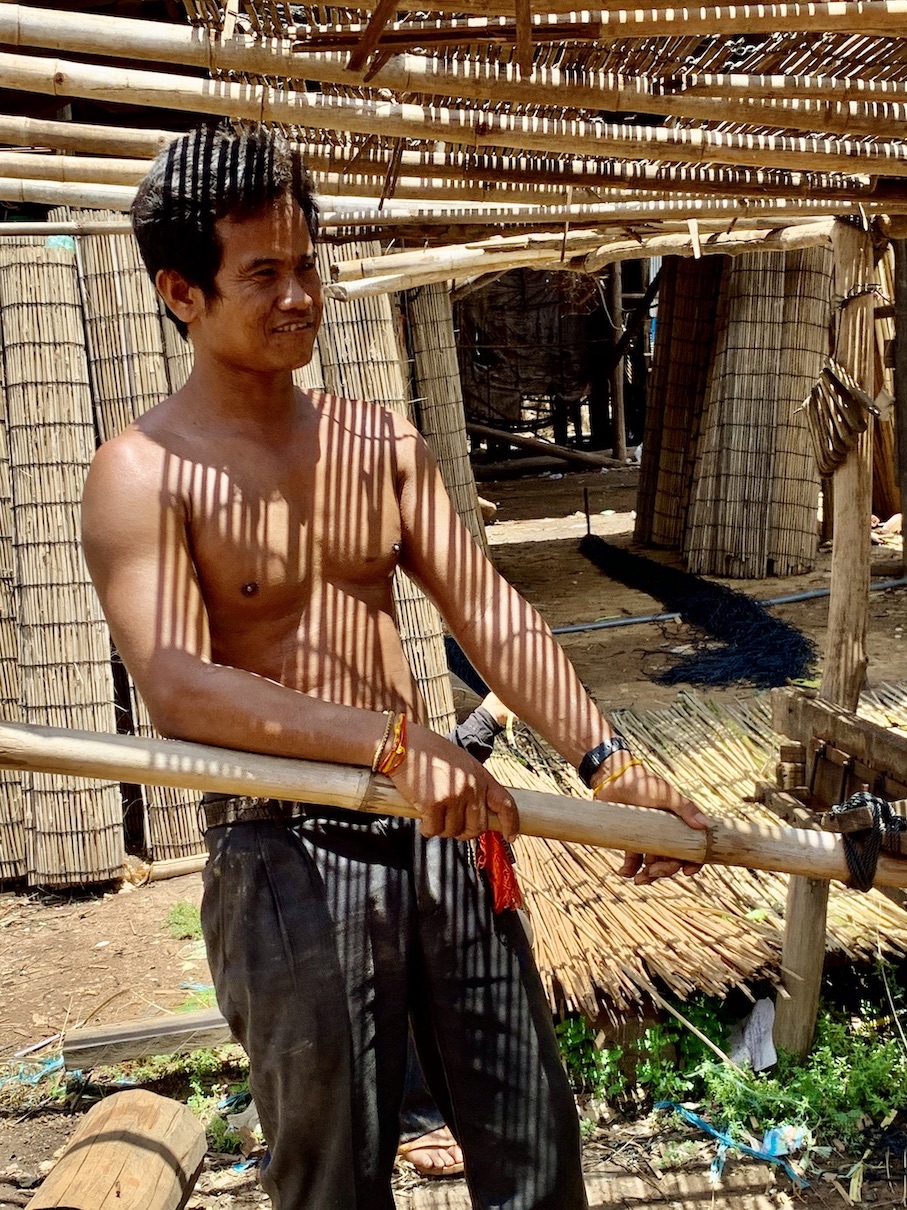 I was fascinated by the weaving contraption, a hulking wooden beast of a thing embedded into the dirt. I guessed it’d been there awhile and will probably stay right where it is until it begins to rot.

The bamboo mats serve as beds for the villagers, as we’d seen in the boat home. Locals also lay them out across main street to dry shrimp in the afternoon sunshine. This is a common sight in all floating villages across Siem Reap province.

Several side alleys running off the main Street lead down to the river. Here, we found a few families pottering around on their boats. These two women and their children were about to set off down the river somewhere. They waved and smiled at us, happily posing for a photo.

Kampong Khleang may not have delivered what we’d been expecting, but I’m really glad we found the time to squeeze it in. This was our last Siem Reap day trip before relocating to Kampot. As swan songs go, we could have done much worse.