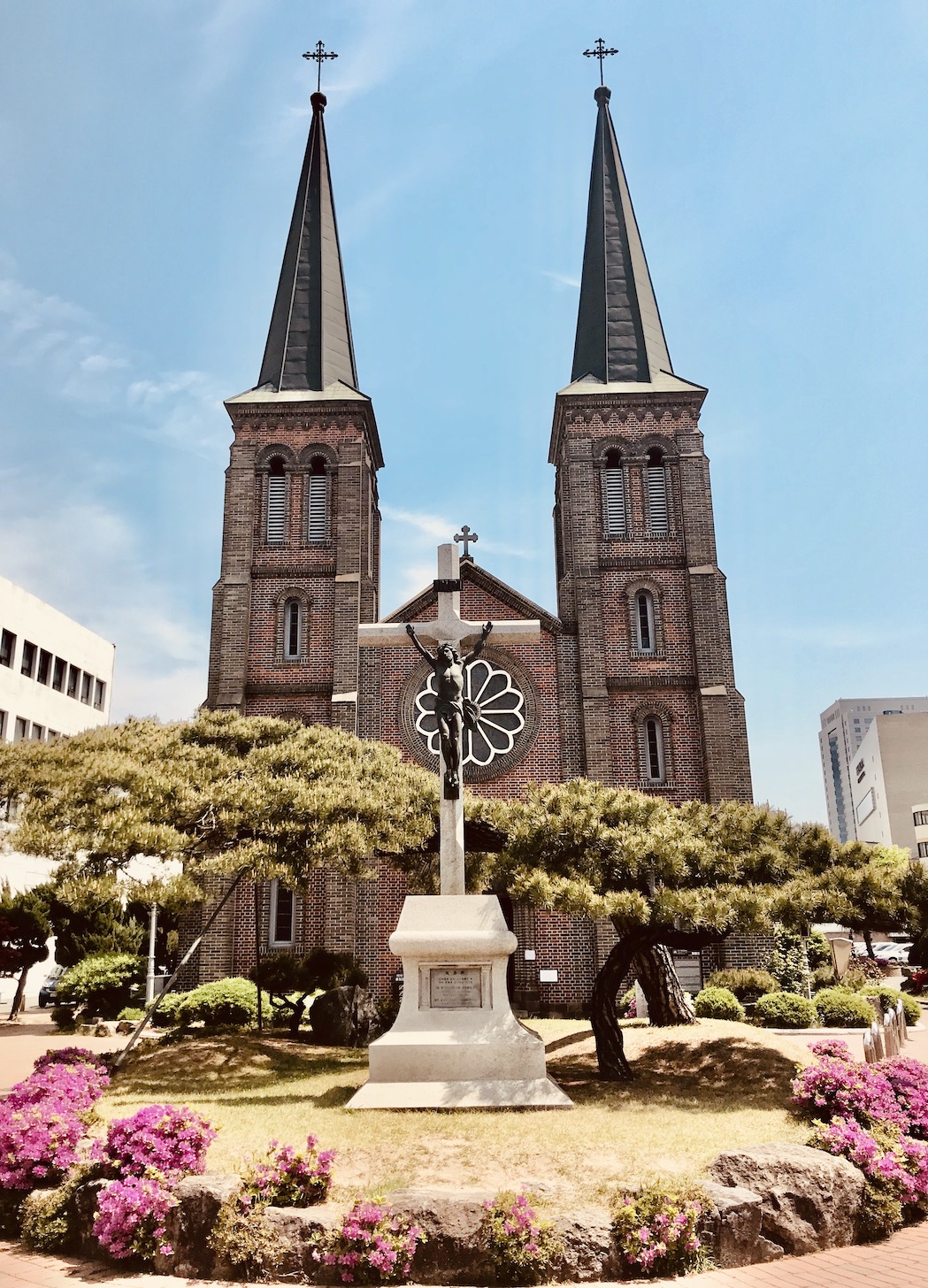 April 2019. The city of Daegu is home to a number of fine churches and cathedrals. Moreover, it has a reputation throughout South Korea as the country’s most religious and conservative metropolis.

In the nineteenth century catholic and protestant missionaries came to Daegu from all over Europe, building a succession of impressive churches. Recently, during this whole Coronavirus mess, Daegu hit the headlines when the government traced a chunk of cases back to the controversial Shincheonji Church of Jesus. 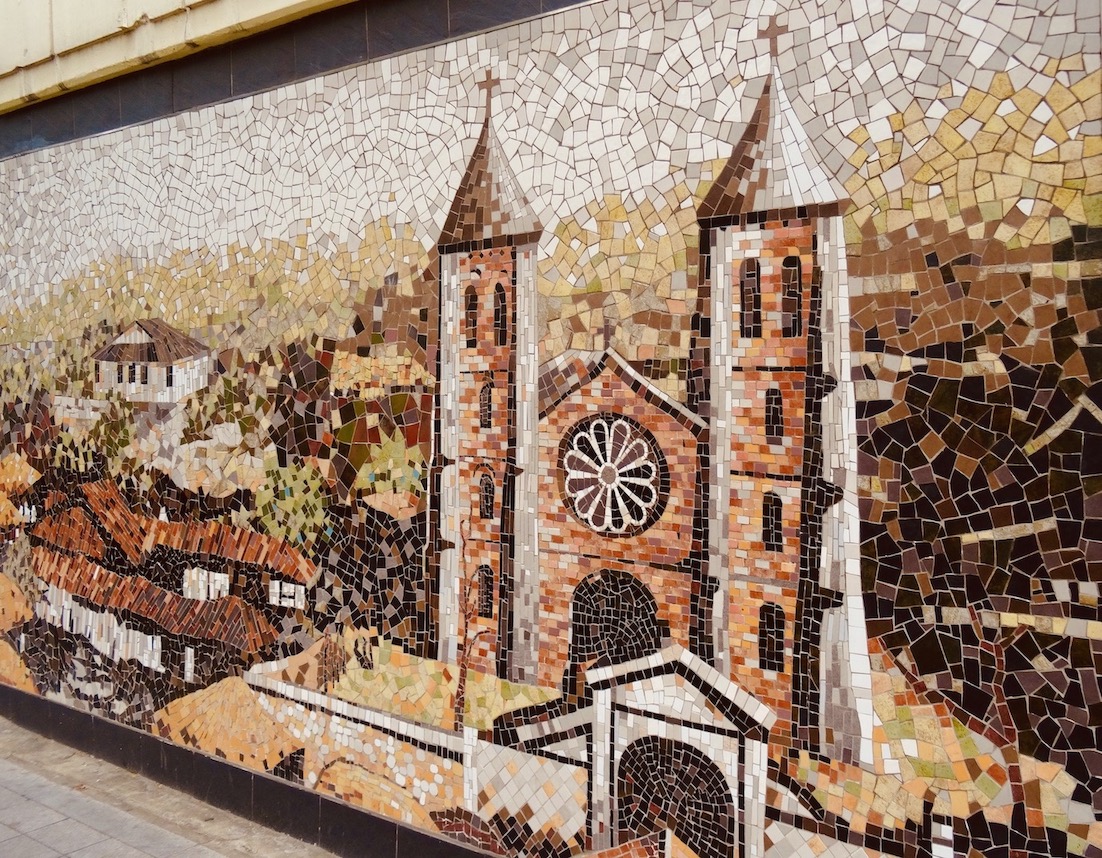 A Daegu street mural of Our Lady of Lourdes Cathedral.

Take a stroll through the city’s historical district and it won’t be long before you stumble upon a church or two… or three. I managed to check out a few during my visit to Daegu.

One is the already reviewed First Presbyterian Church. The other, literally just across the road, is Our Lady of Lourdes Cathedral. 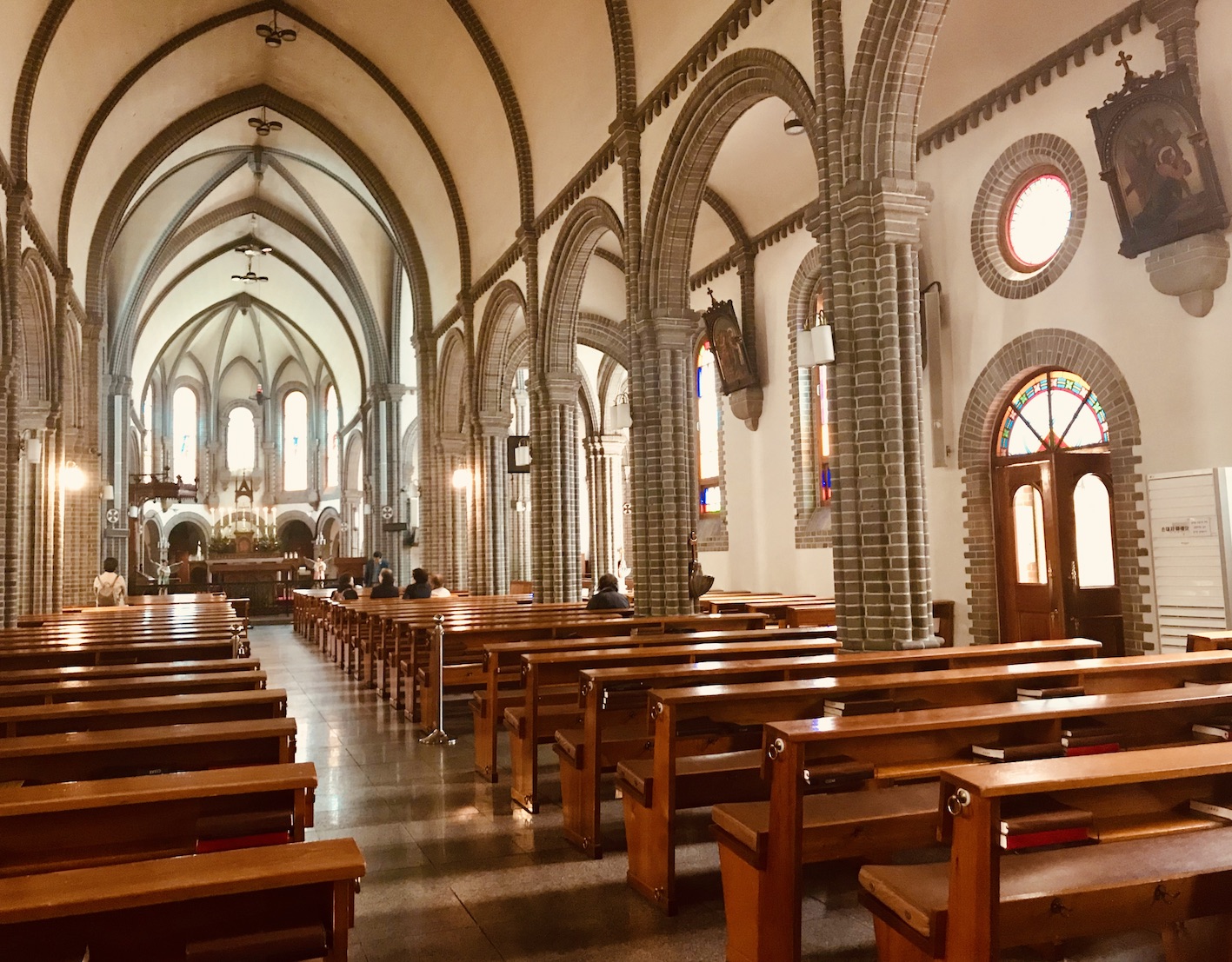 This gothic cruciform cathedral sprang up in 1902 on the site of a former wooden church after it went up in flames. It has a number of names, such as Gyesan Catholic Church, or simply The Cathedral of Daegu.

Services follow Roman and Latin rites, while it was elevated to cathedral status in 1911. The bell towers joined the party in 1918 and former South Korean president Park Chung-hee got married here on December the 12th, 1950. 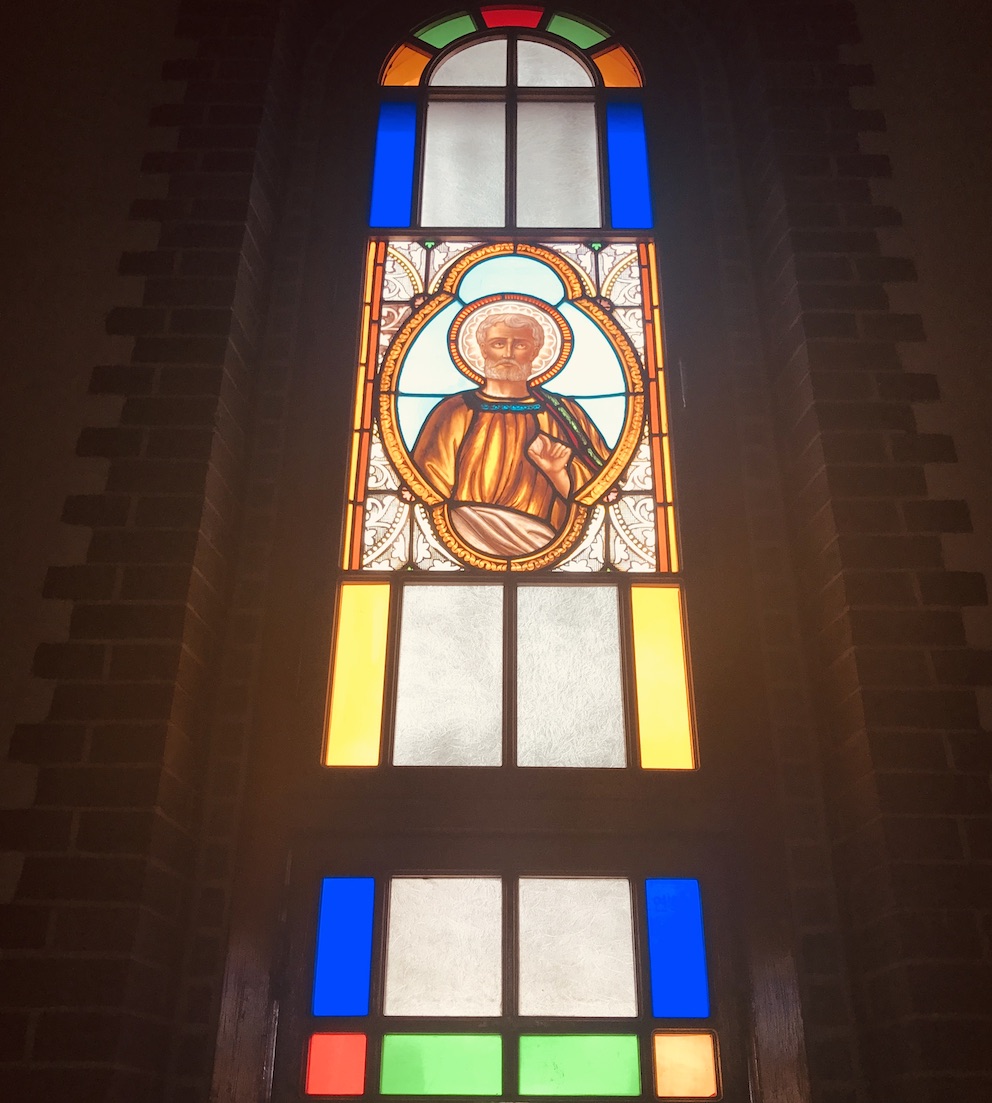 A sleepy vibe prevailed in the cathedral that afternoon. Wonderboy lit a candle and delivered a prayer for his late father. Leaving him to his reflective solitude, I took a stroll, admiring the stained glass windows and a few lavish paintings, including a somewhat gaudy and shimmering Jesus Christ. 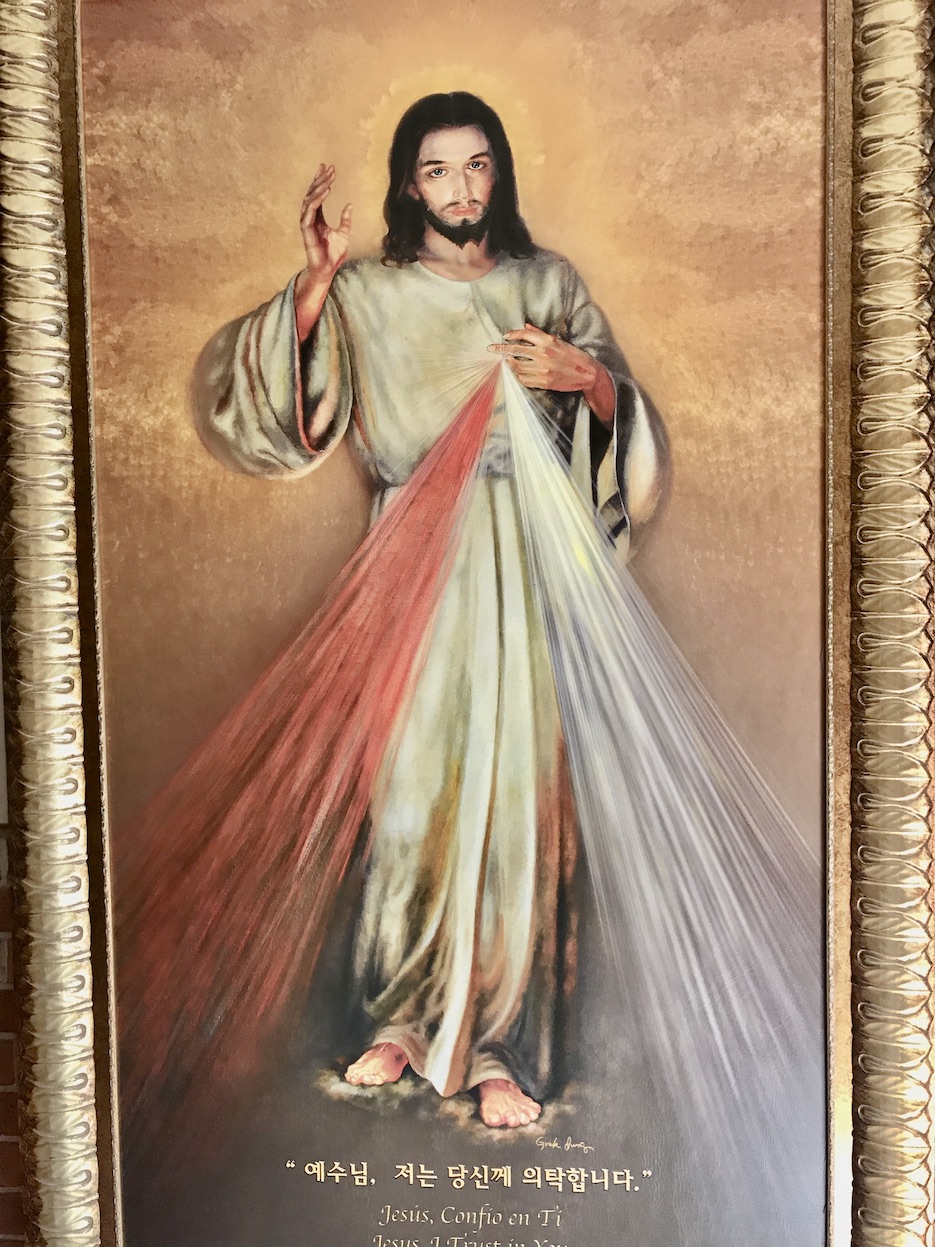 Outside there’s a lovely little garden with gnarly old trees, well-kept flowerbeds and a few benches. Some lucky residents in a nearby apartment block have living rooms views of the cathedral and its garden. 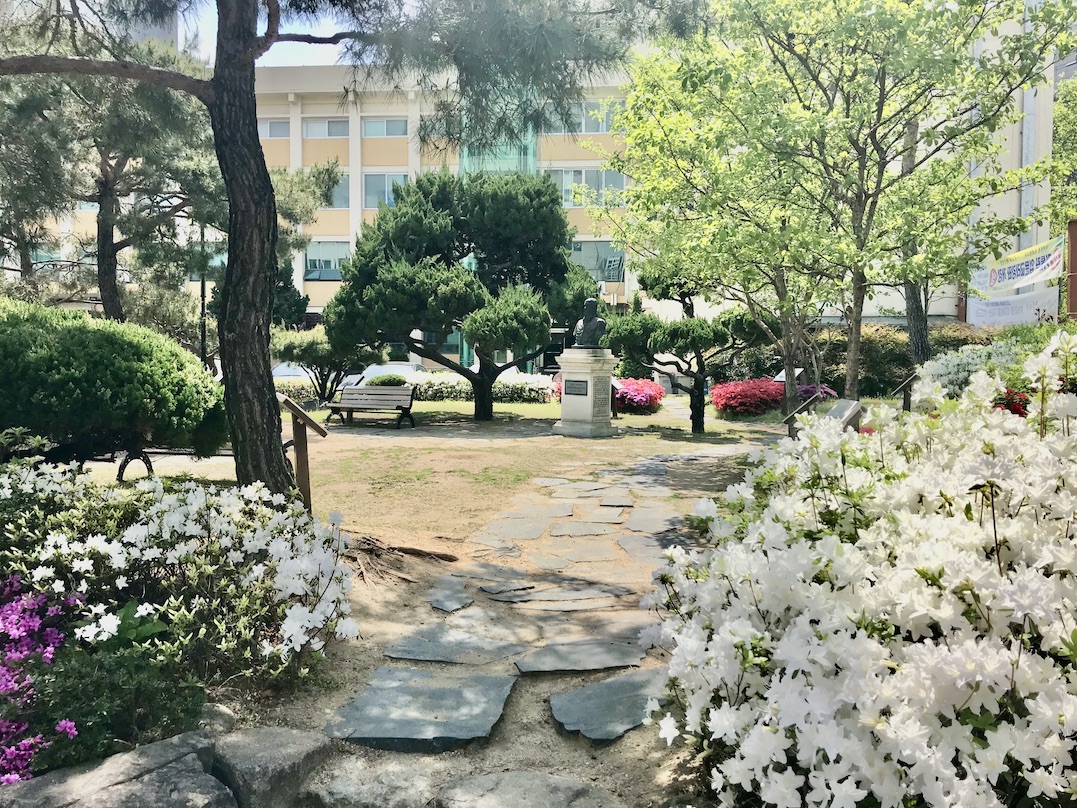 A lone statue stands in tribute to Father Paul Robert Achille, a French missionary who designed the cathedral in collaboration with the Paris Overseas Missions Society.

Achille came to Daegu at a time when being a priest was actually illegal! Nevertheless, he survived a fierce period of persecution and went on to serve the cathedral in a number of capacities for nearly thirty years.

The Cathedral of Daegu. 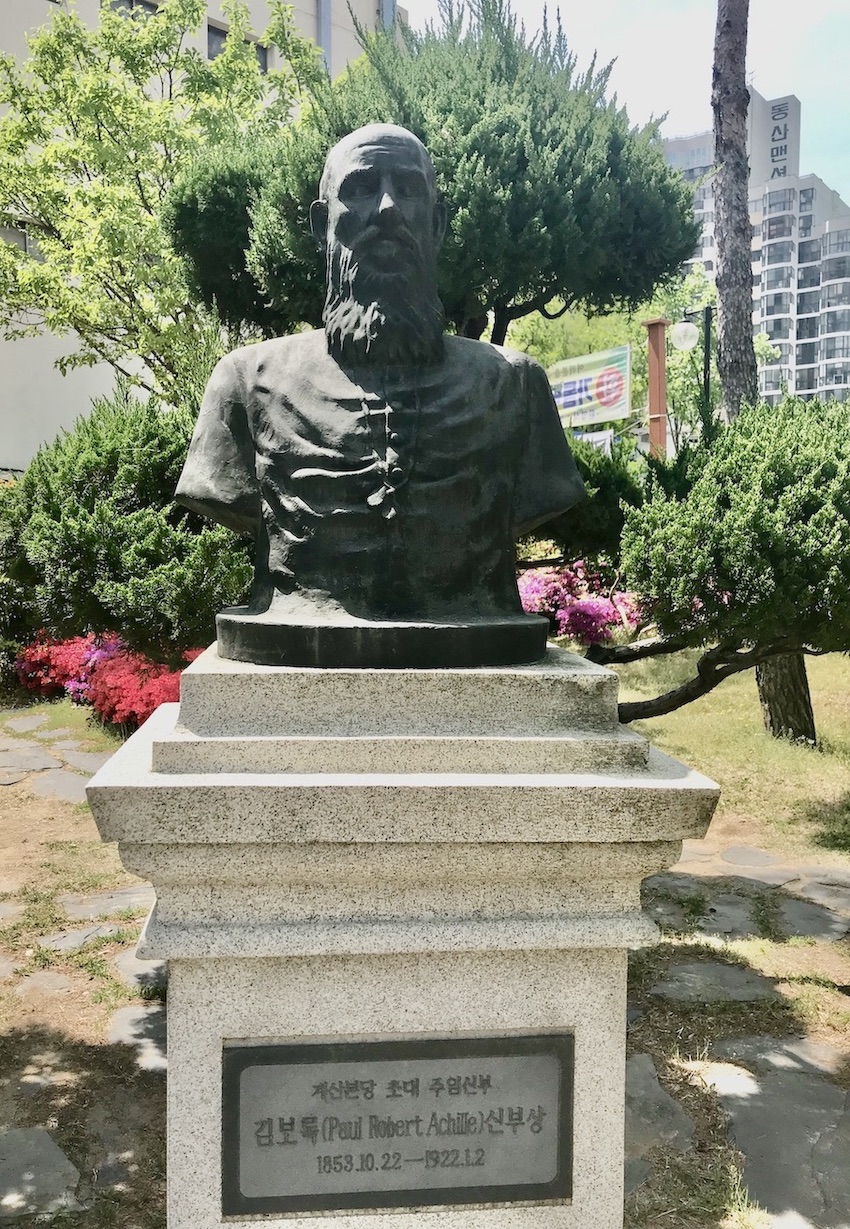 We also happened upon this cool photo board capturing Daegu locals in feverish excitement during a visit from Pope John Paul II in 1984. Seriously, what a rock star! 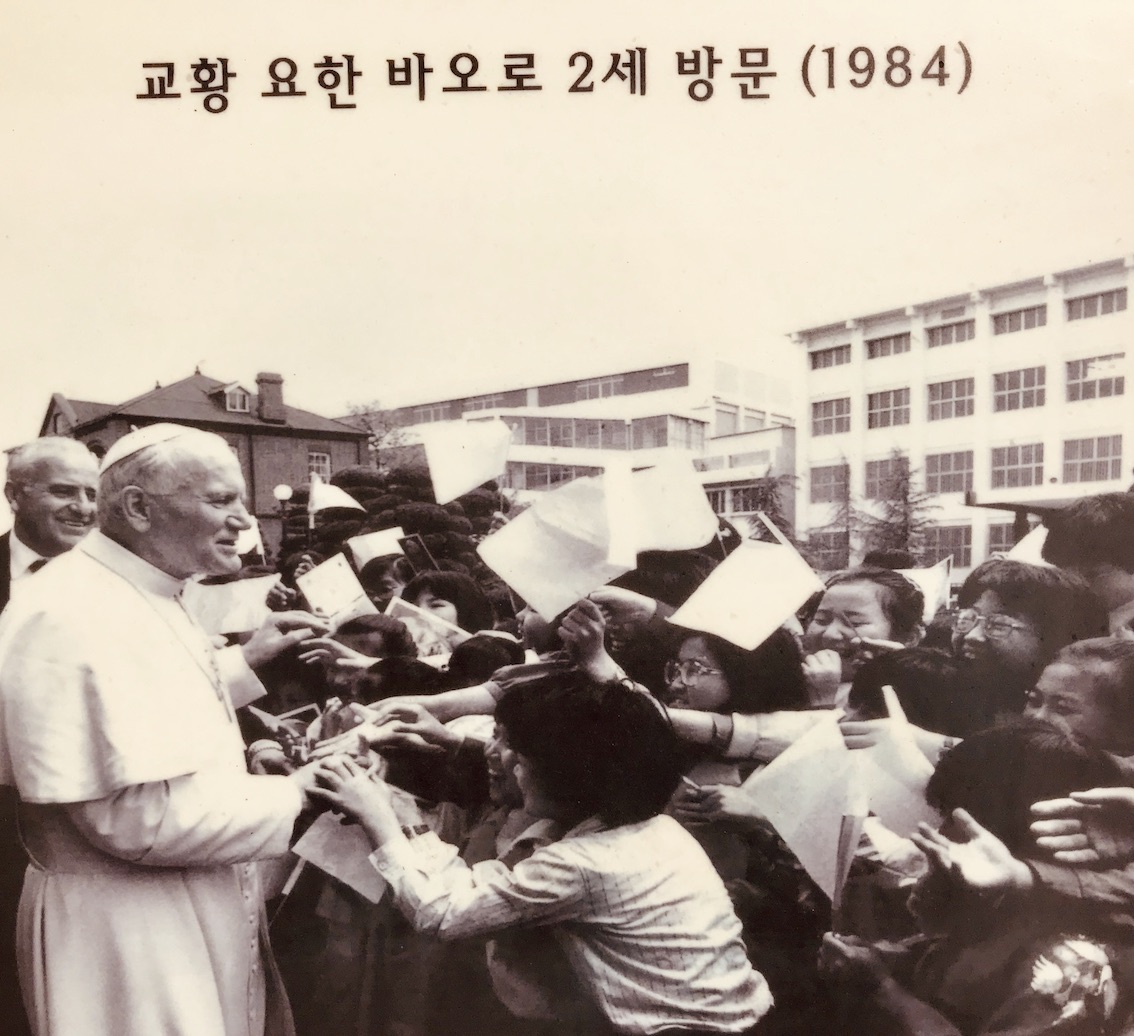 If you walk all the way around to the back of the cathedral, there’s a very nice photo op that includes the towering form of First Presbyterian Church of Daegu in the background. It almost looks like a face-off! I know which building my money would be on. 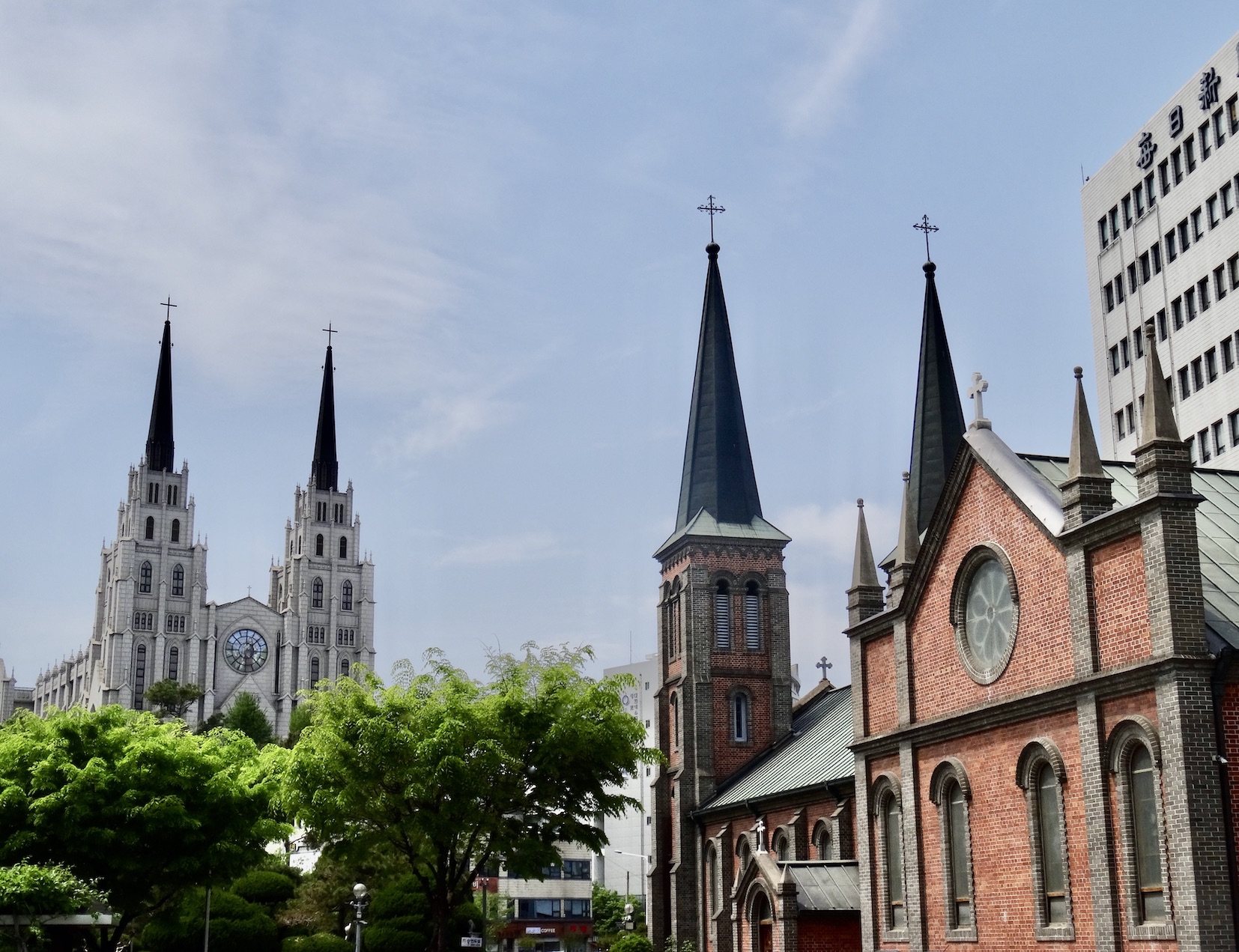 Our Lady of Lourdes Cathedral (front) with the First Presbyterian Church in the background.

Wonderboy and I rounded off our visit with a churchside drink at Coffee Myungga. It was really sunny that day, so much so that the old joint seemed to be melting behind me as I enjoyed my interesting Sesame Seed Latte. Yes, there were actual sesame seeds mixed in with the milk. 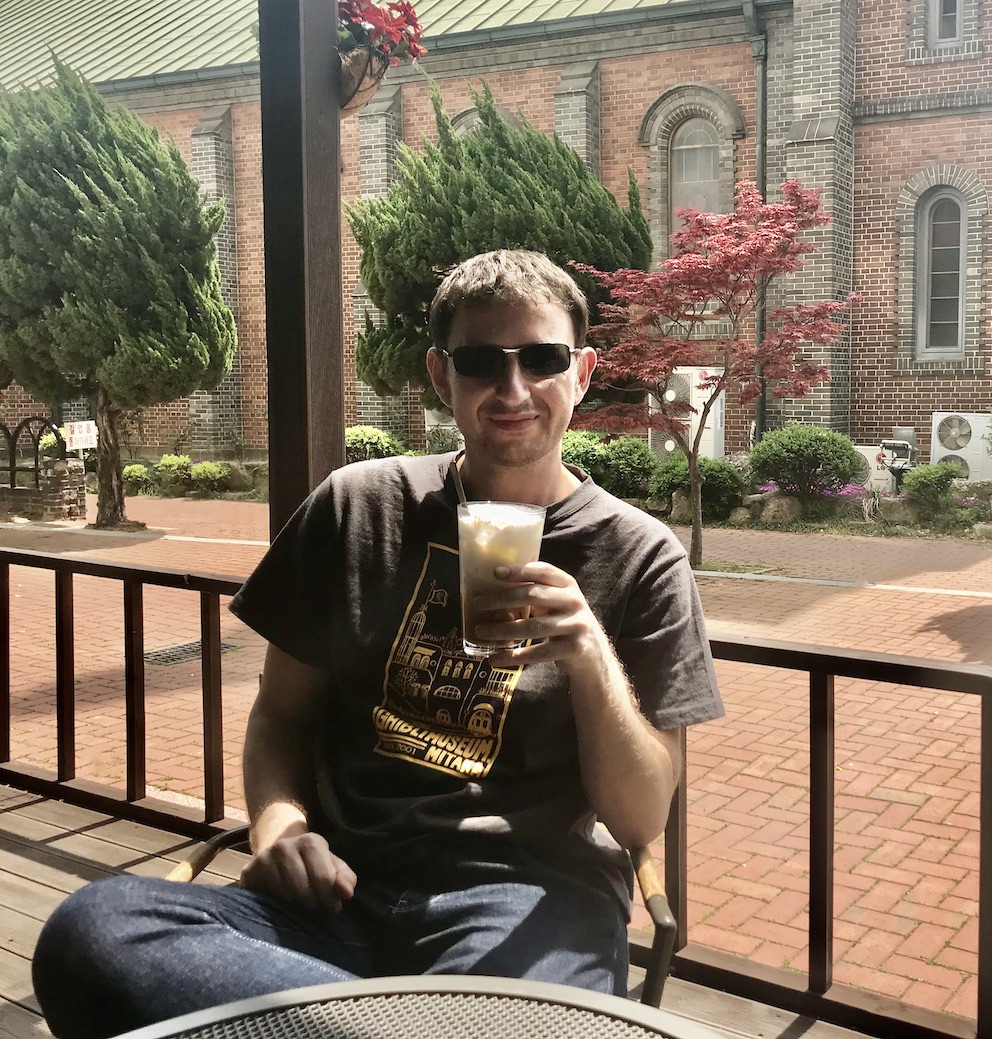 Kicking back at Coffee Myungga.