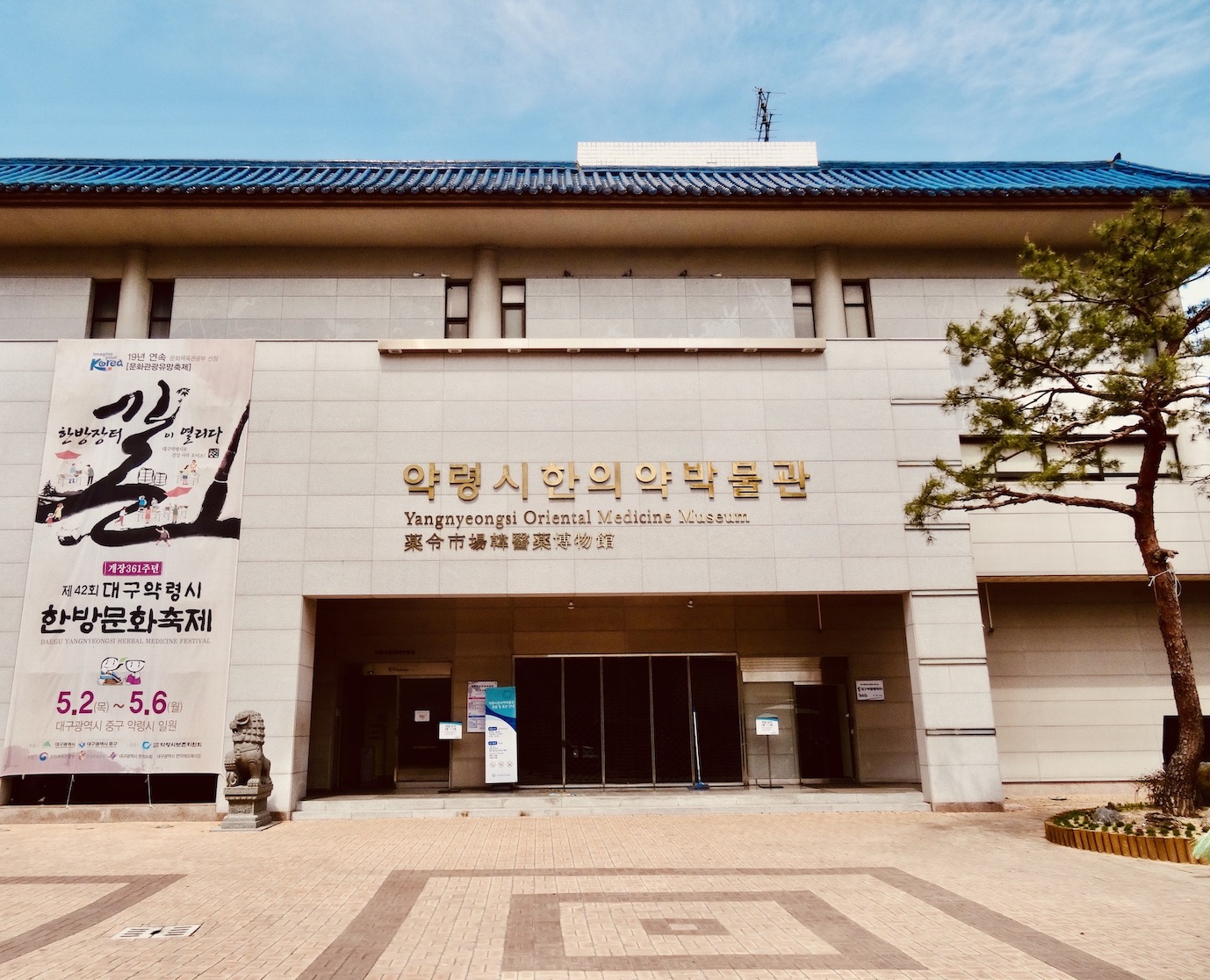 April 2019. Although firmly under the radar with international tourists, the city of Daegu is famed within South Korea for its European churches, traditional hanok village and gorgeous lake. Moreover, it has a reputation as the nation’s so-called coffee capital. However, its biggest draw is Yangnyeongsi, South Korea’s oldest traditional medicine market.

With a long and respected history dating back to 1658, people still flock here from all over the country in search of age-old remedies. The market sits snugly in Daegu’s historical district and has become so popular it even has its own museum! 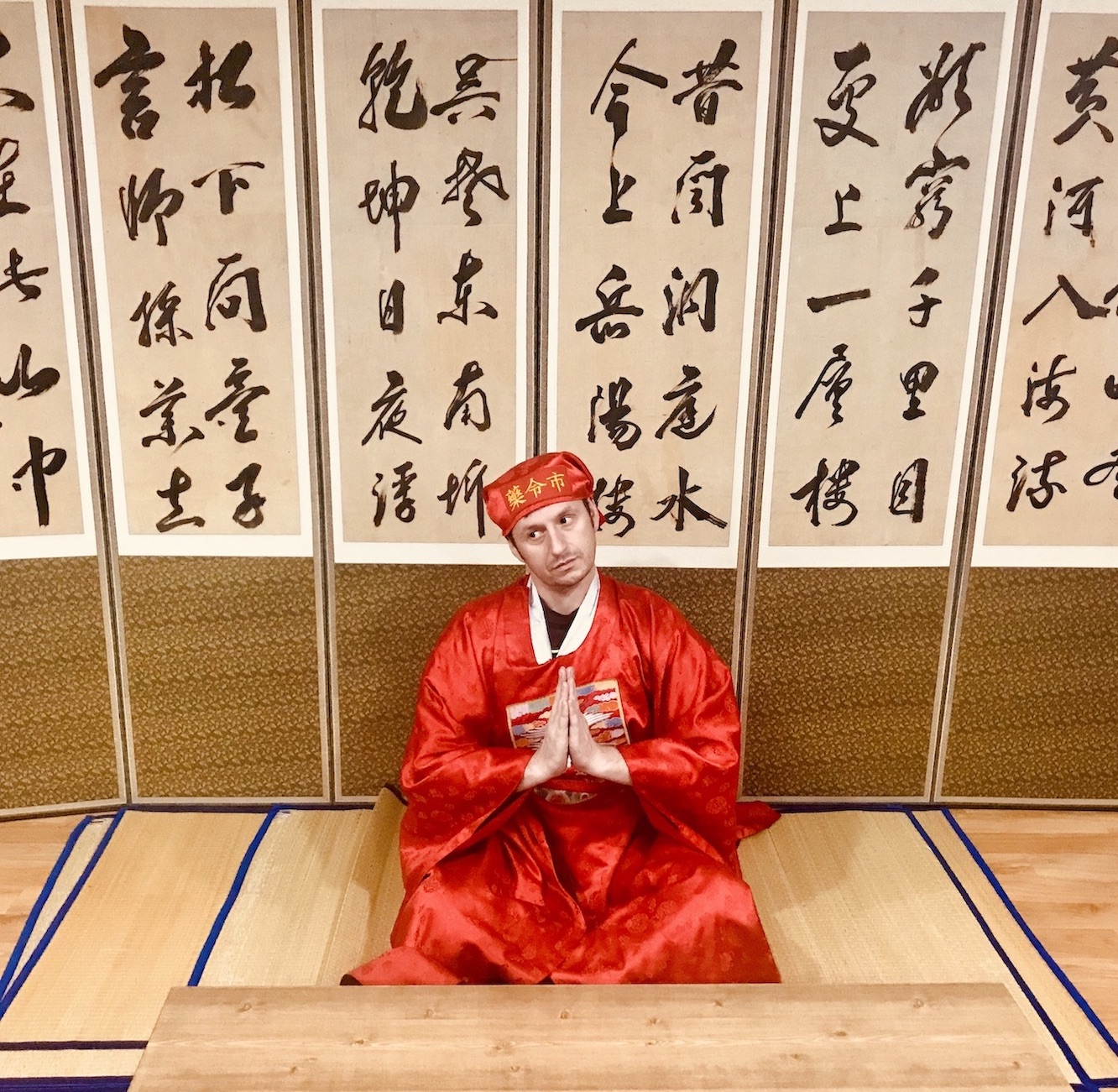 Getting medicinal in Daegu.

Moreover, if you’ve always dreamed of dressing up like a 17th century pharmacist, DON’T WORRY, the museum has your back! 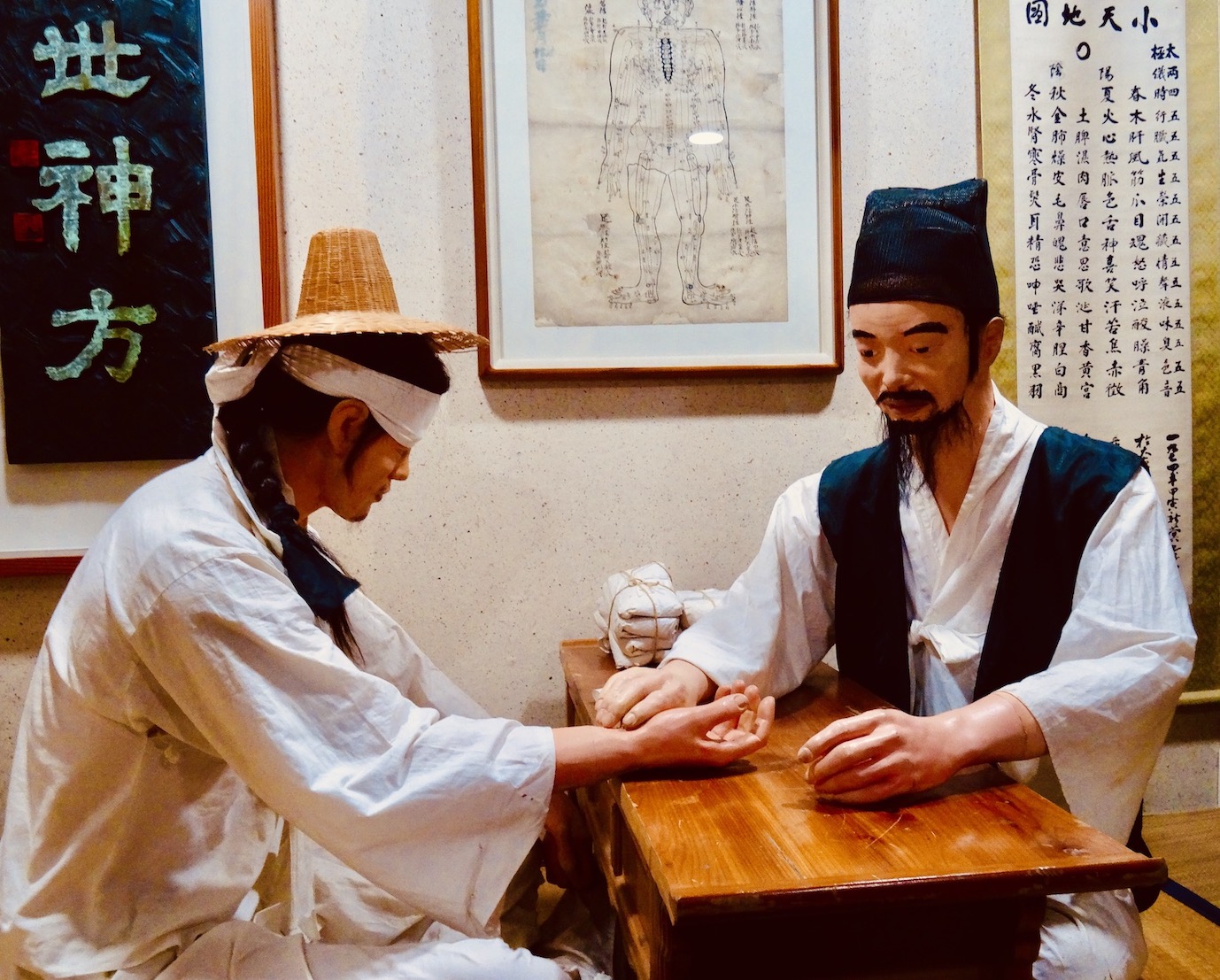 “Mm, you appear to have no pulse”.

The museum’s exhibits lie spread out over two floors and, I’m guessing, haven’t changed all that much since the place opened in 1985.

The ground floor presents the market’s early beginnings, including an amusing animated story about how a 100 year old red Ginseng root saved the life of King Sukjon of Joseon. The king had been stricken by a mystery illness and the cure in question came from…. yup… Yangnyeongsi Medicine Market. 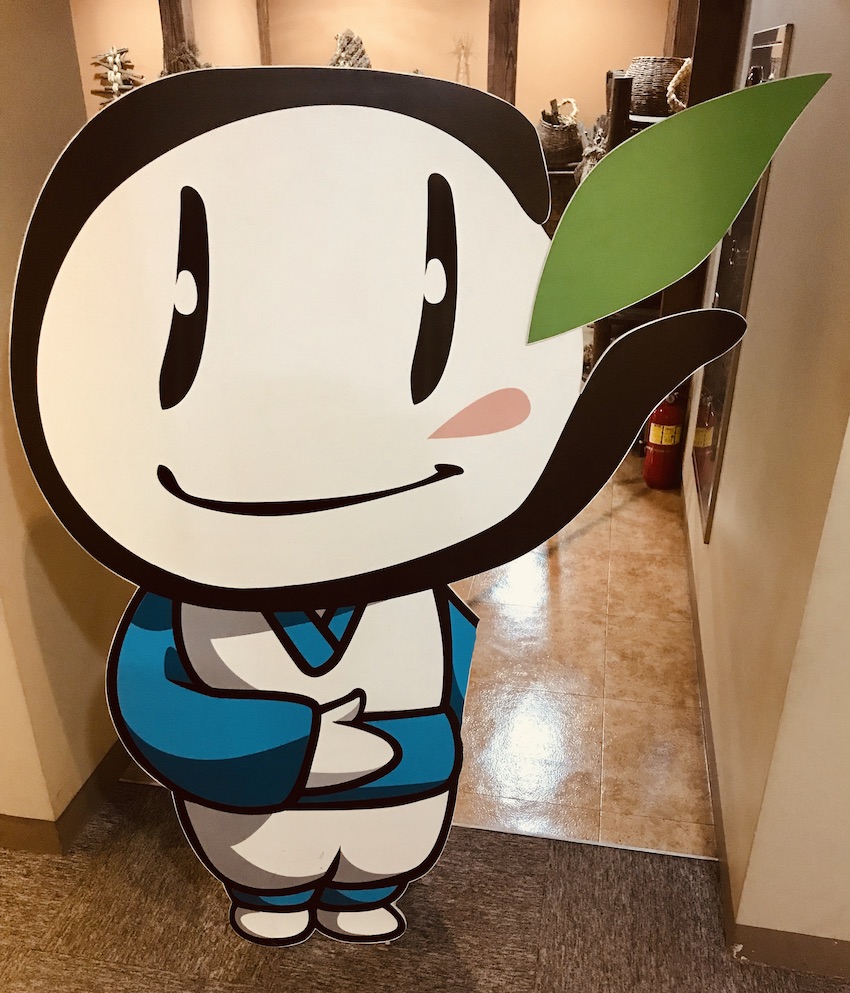 We also also got to meet the museum’s silly mascot. We never did find out his name, but he appears to be a walking teapot with a herb sticking out of his head. Nice work if you can get it. We called him Leafy, which was actually the name of one of my students back in Ruian, China.

The museum’s animated videos are hilarious! The above short tells the tale of Daegu under Japanese occupation during the 1920s. In the story, the medicine market’s very existence is threatened by the evil Japanese Army, who want to demolish it in order to build a highway.

With a plodding pace, clunky animation and a snarling, mustache-stroking bad guy, I actually felt a bit sorry for whoever made this. “Ha ha ha ha ha ha!!!” cackles the villain, for what feels like several weeks. 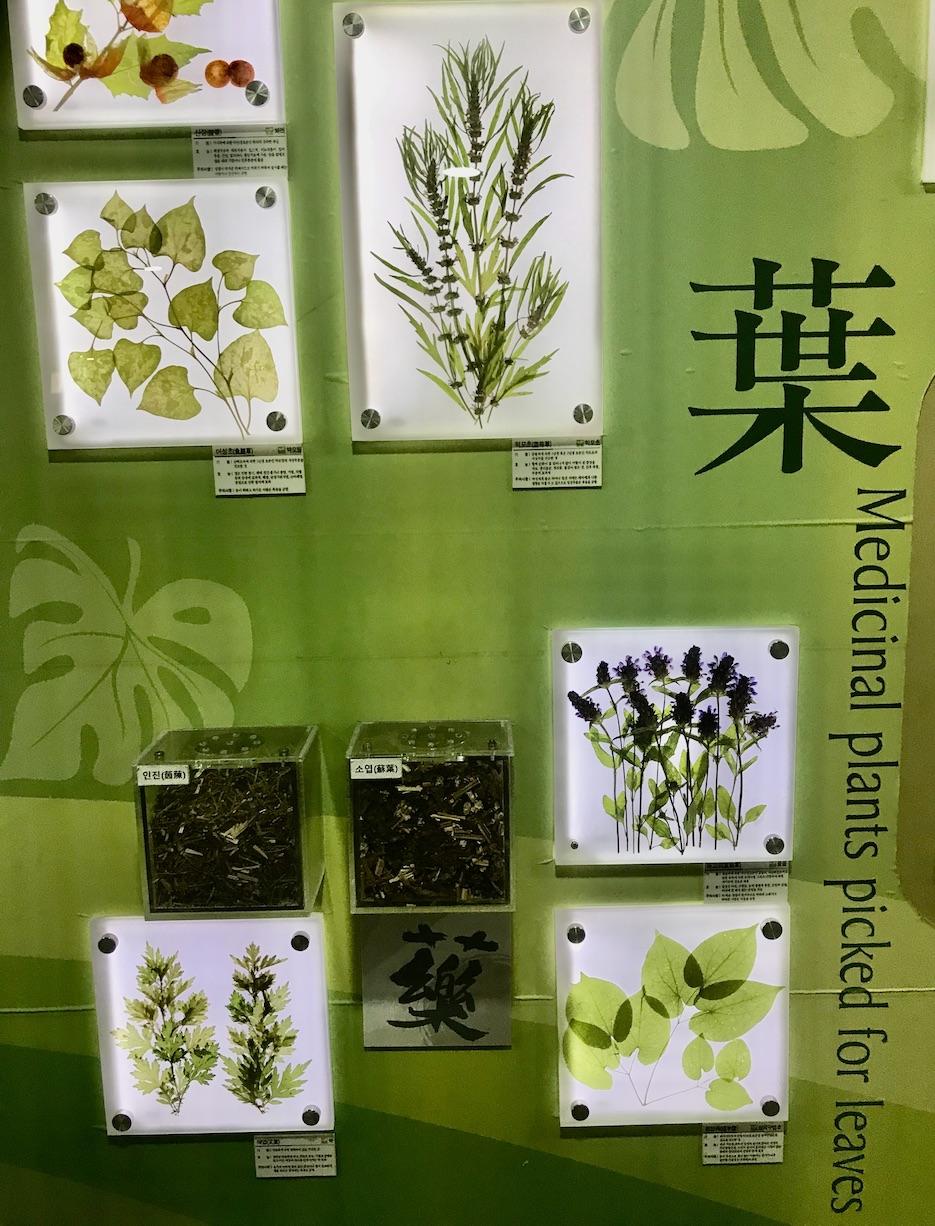 A large chunk of the museum gives itself up to a more general “This is how herbal medicine works” vibe. As such, there’s a full rundown of all the major herbs and their different values, along with a detailed look at some fundamental differences between eastern and western medicine.

In South Korea there are four so-called body types, depending on one’s physical condition and eating habits. I’m a “Taeyang” type, which apparently means I’m “sociable and ambitious”.

According to the cute cartoon panda, this means I should pile up on rice and buckwheat. What’s more, I’d be wise to steer clear of peanuts, white flour and sesame oil. There goes my favourite combo of movie snacks. 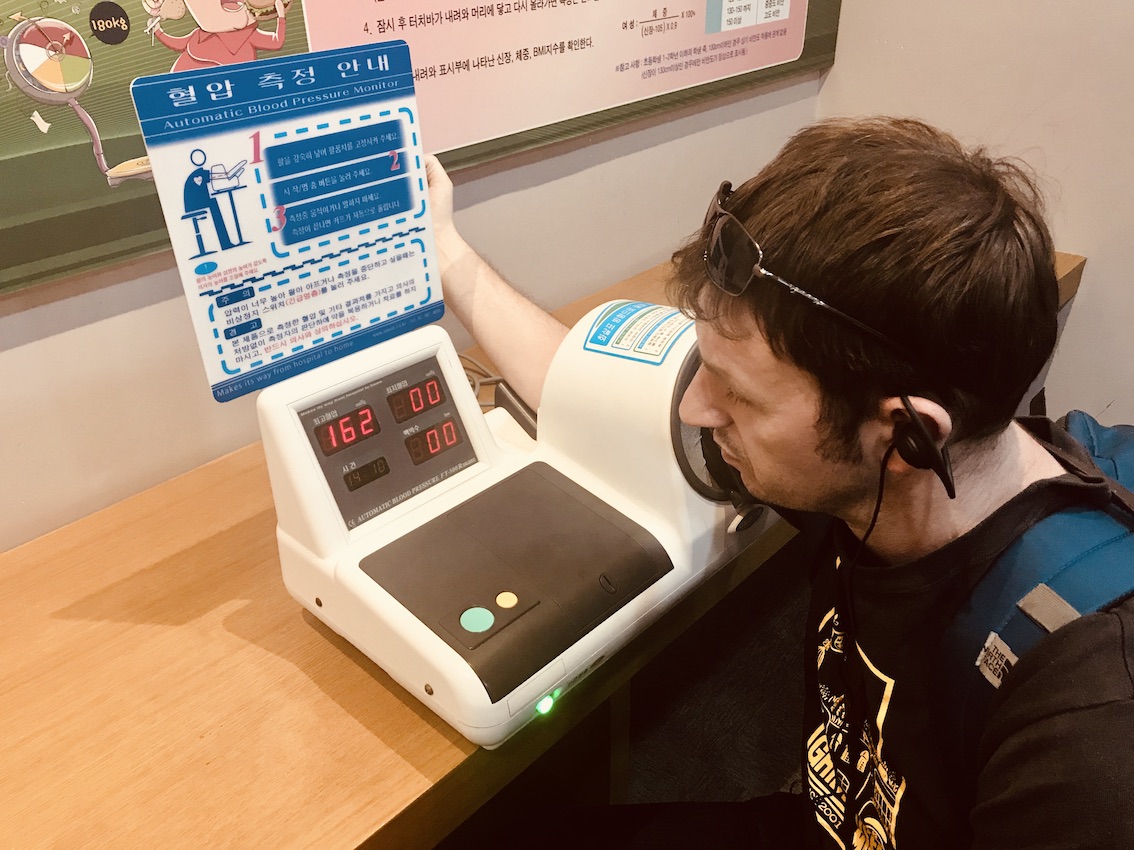 Elsewhere, I got the chance to take my blood pressure for the first time in years. I admit to feeling more than a touch nervy before the machine confirmed that it’s unlikely I’ll drop dead anytime soon.

Quite suddenly, our peaceful museum wanderings came to an abrupt end when we found ourselves swarmed by an excitable school group. Amid a hailstorm of chatter and flicked V signs, one boy kept repeating “Hometown Daegu, hometown Daegu” over and over.

Another boy confidently told Wonderboy that he looked like Jack Black, while their frazzled teacher tried to move everyone on and keep them focused on their museum tasks.

As they departed, a girl popped her head around the corner, cooing, “You’re so handsome!!!!” before promptly disappearing again. 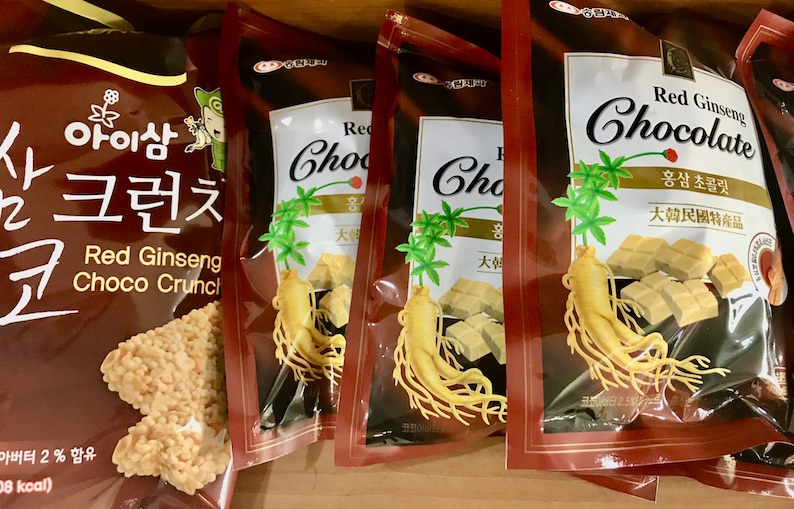 Our self-guided tour of Yangnyeongsi Museum of Oriental Medicine concluded with a walk through the small shop. It seemed to be quite the red ginseng festival. In fact, there was red ginseng tea, red ginseng cookies and red ginseng chocolate bars.

Next to the shop, there’s a herbal foot spa where you can soak your feet in… yes, you guessed it… more red ginseng. Good enough for the king, good enough for me.

Yangnyeongsi Museum of Oriental Medicine is free to enter and open daily (except Mondays) from 09:00-18:00.