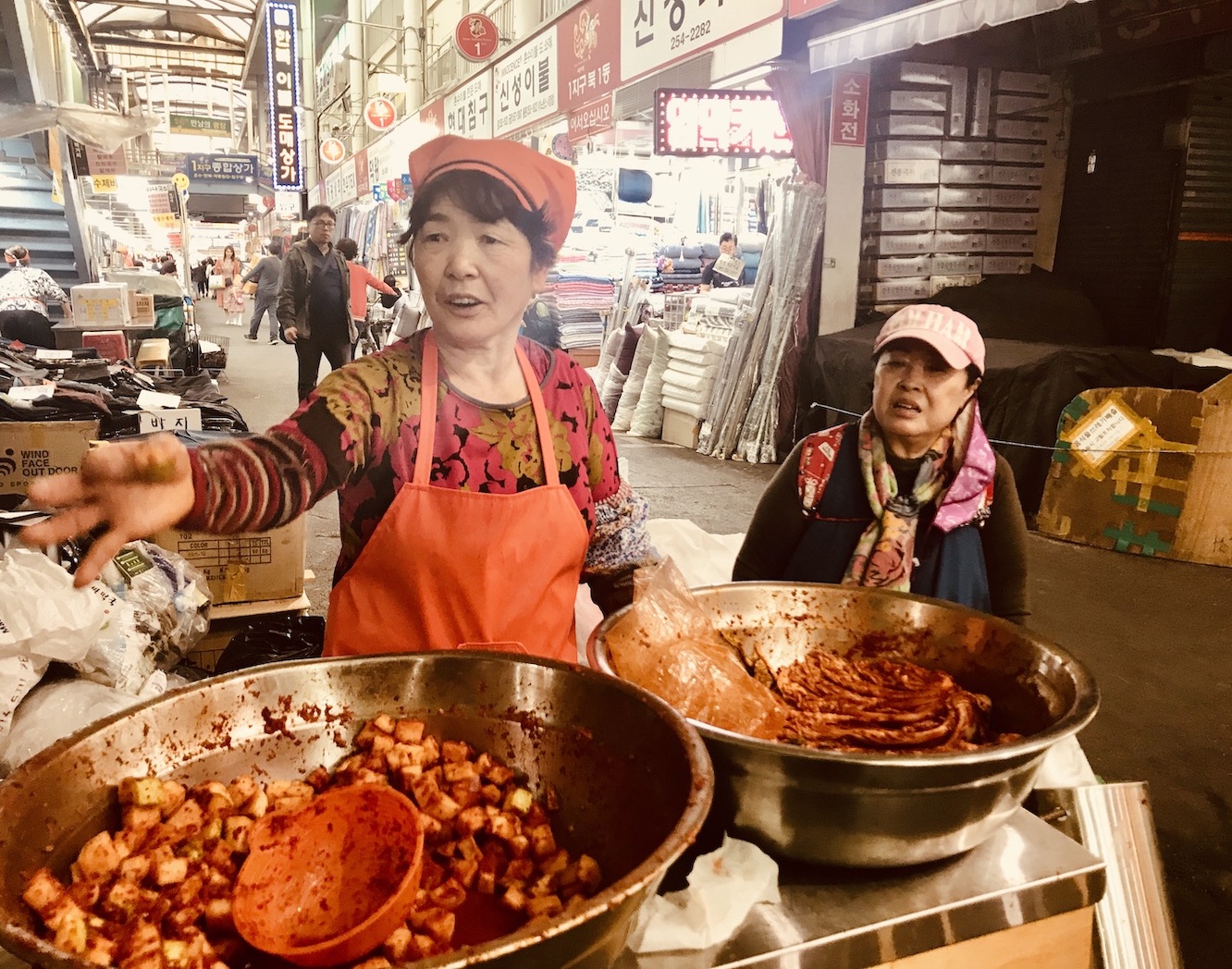 April 2019. “Mate, I’ve got to take you to Seomun Night Market” hummed Wonderboy one morning, rubbing his hands together. “The food is just….”. I can’t remember exactly what adjective he used. But it didn’t matter, I was already sold on the words food and market. After all, this was South Korea, where the promise of a fine meal is never far away. 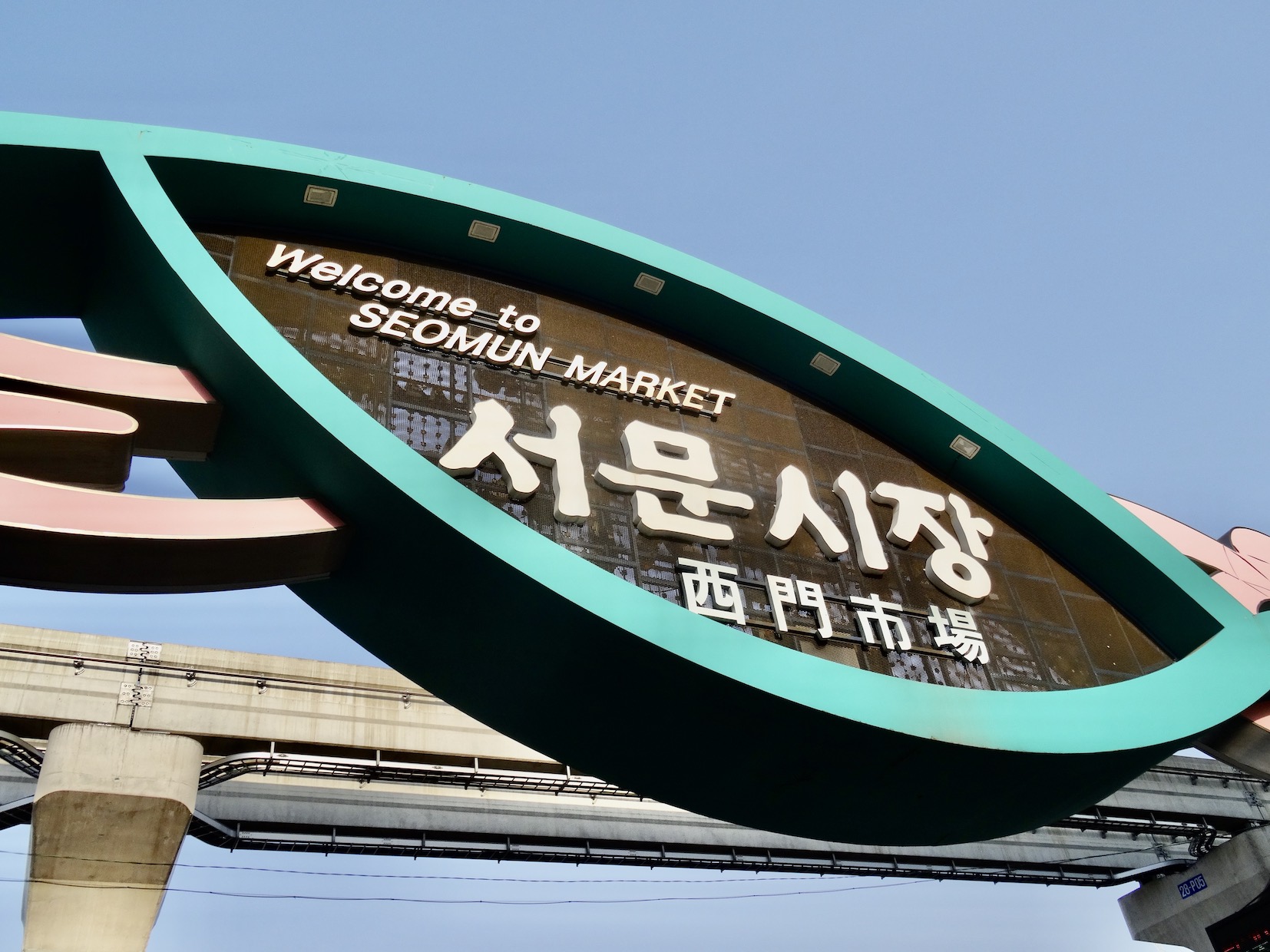 Hence we put an evening aside for a visit to the market. Armed with loaded wallets and hungry stomachs, we met up with one of Wonderboy’s teaching friends, Darren.

The poor guy had only recently recovered from being hospitalized by food poisoning during a trip to Thailand! In for a penny in for a pound, Darren seemed just as keen as us for a night of Seomun’s famed culinary delights. 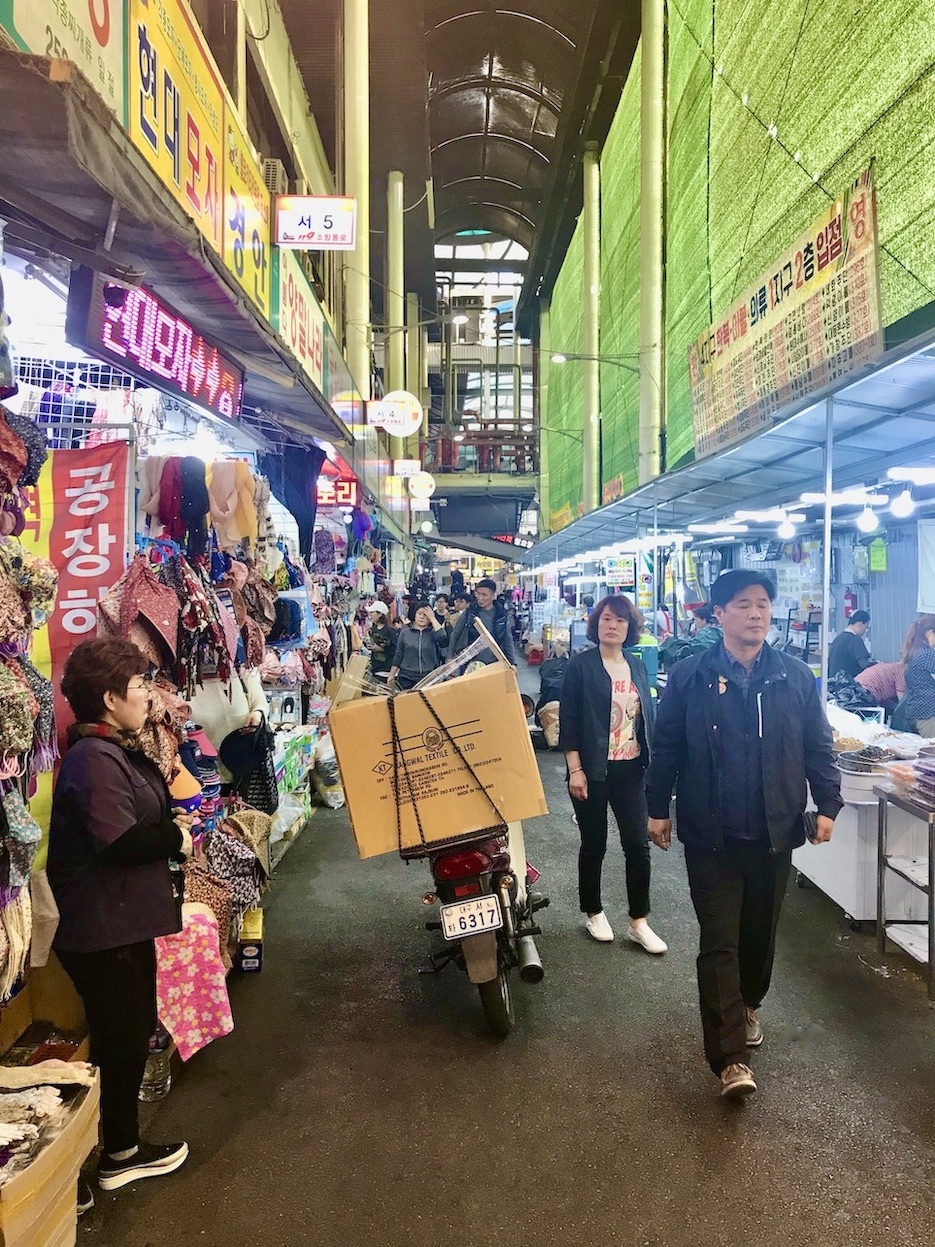 Bypassing the usual tat in search of food.

Seomun Night Market is the largest traditional street market in Daegu, with over four thousand stores. I’ve even read a few articles claiming it’s the biggest night market in the world. While there’s a focus on textiles, you can find pretty much anything here. It’s just a matter of searching through the logical grid system of lanes and alleys.

Luckily, we knew exactly where we were heading. Following the smell of sizzling meat and the sound of derivative soft rock, we made our way through the long row of terraced food stalls. I love how the singer even gives me a little wave as we stopped to politely nod our heads.

Wonderboy and Darren were already Seomun Night Market veterans and therefore keen to give me their recommendations.

As you’d expect, the place offers just about every traditional Korean plate you could think of, in addition to a variety of fusion dishes and international favourites. 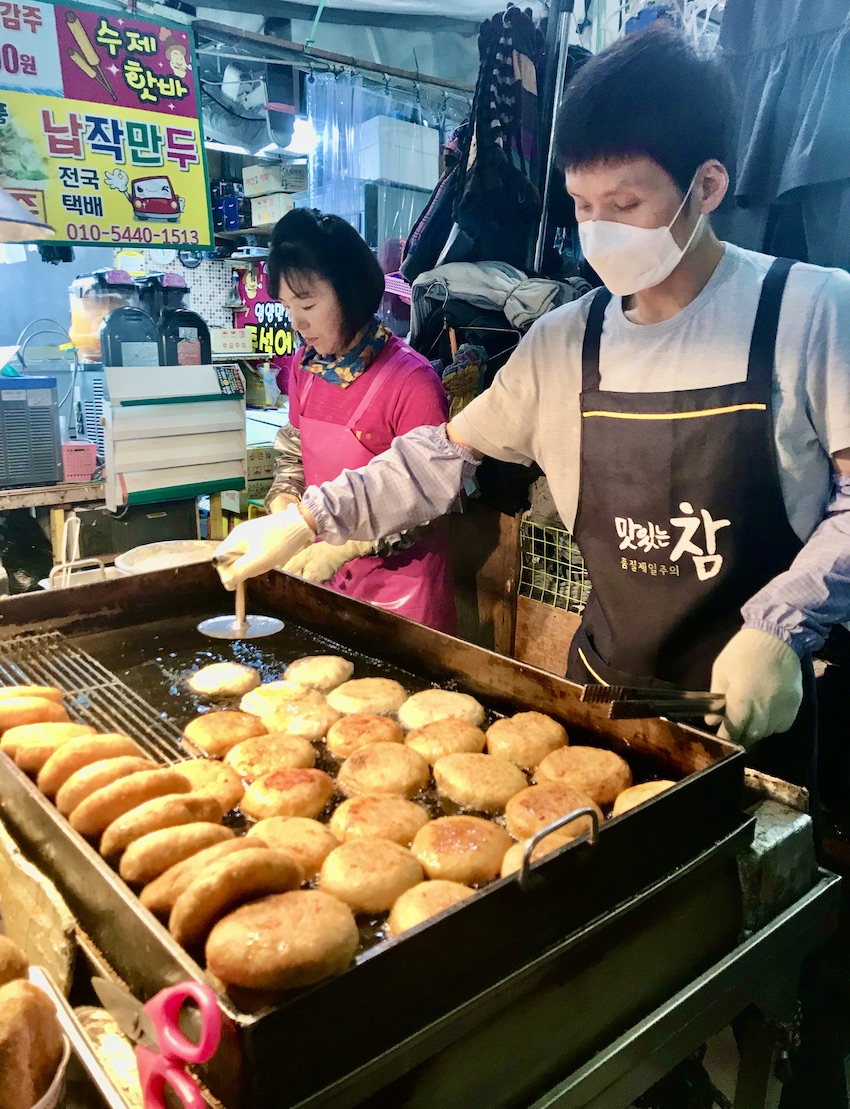 The first thing I tried was Hotteok, a traditional Korean pancake topped with brown sugar, cinnamon and sesame seeds. Tasty and cheap, I put this down as my first Seomun Night Market win! 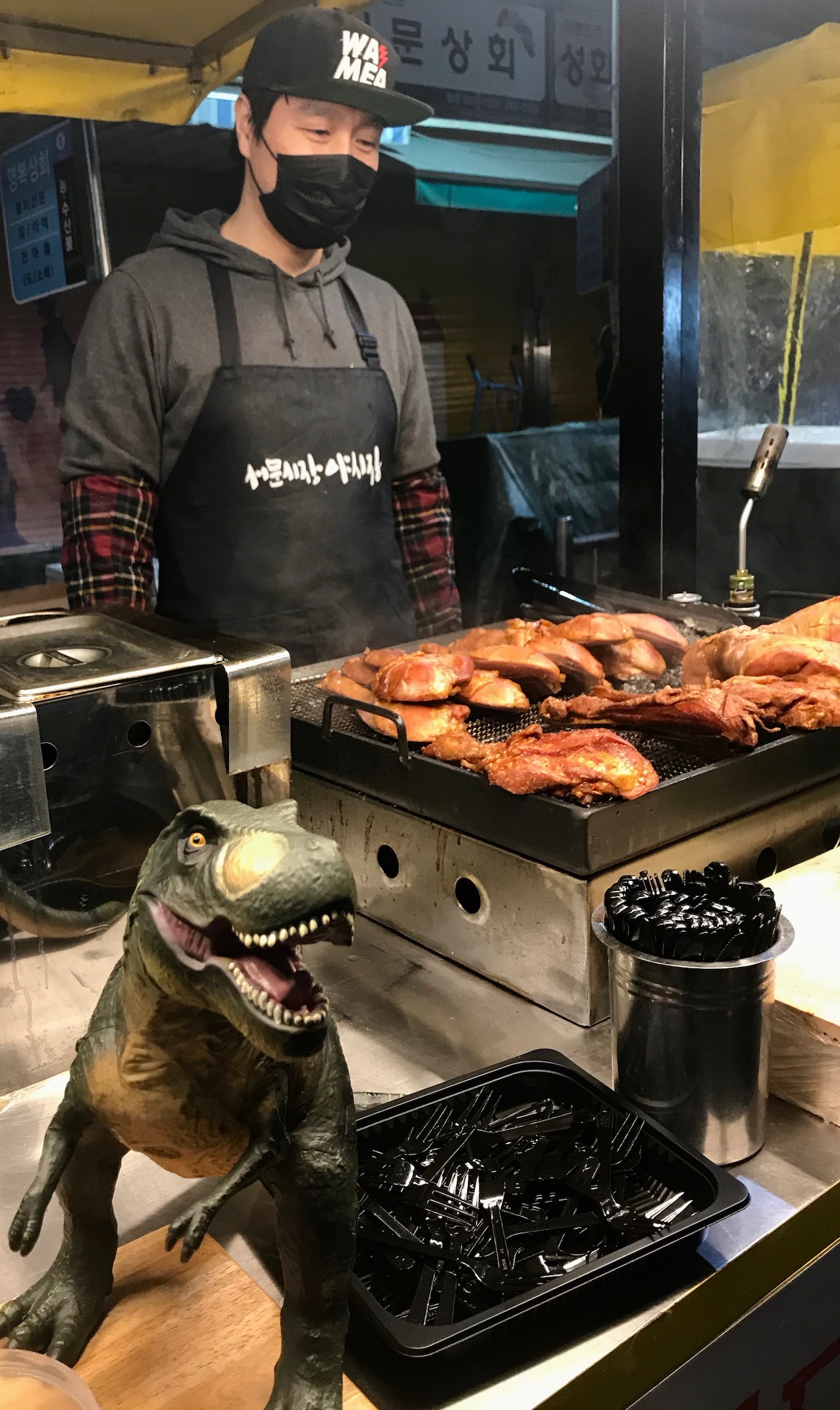 At this stall, the pitch was giant turkey legs “fit for a dinosaur”. Of course I had to try one. 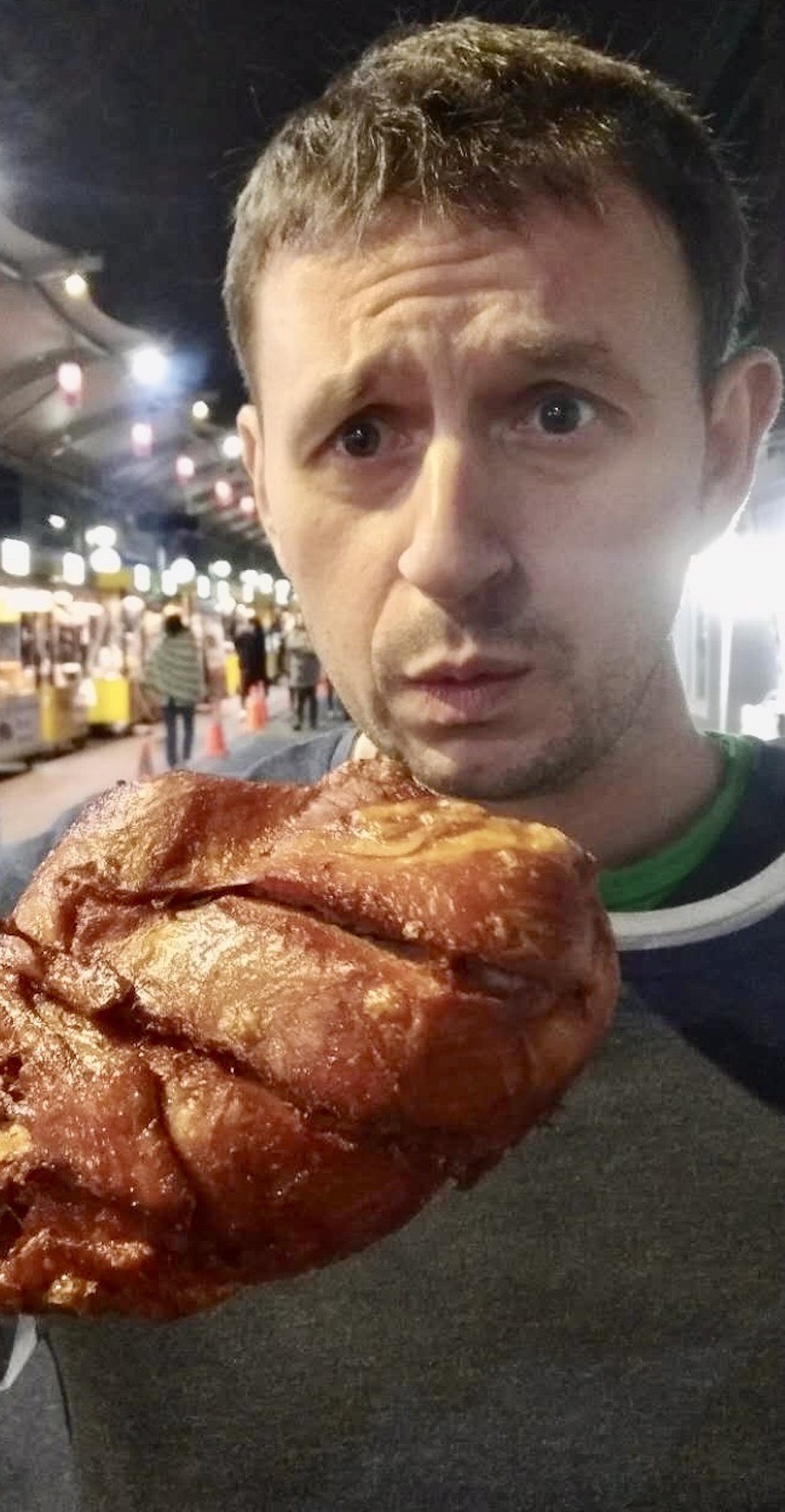 A big old leg of turkey.

The thing was so damn heavy and it came with a paper glove to protect my hands from all the deliciously disgusting grease. Mmmmm.

Where to Eat, Daegu. 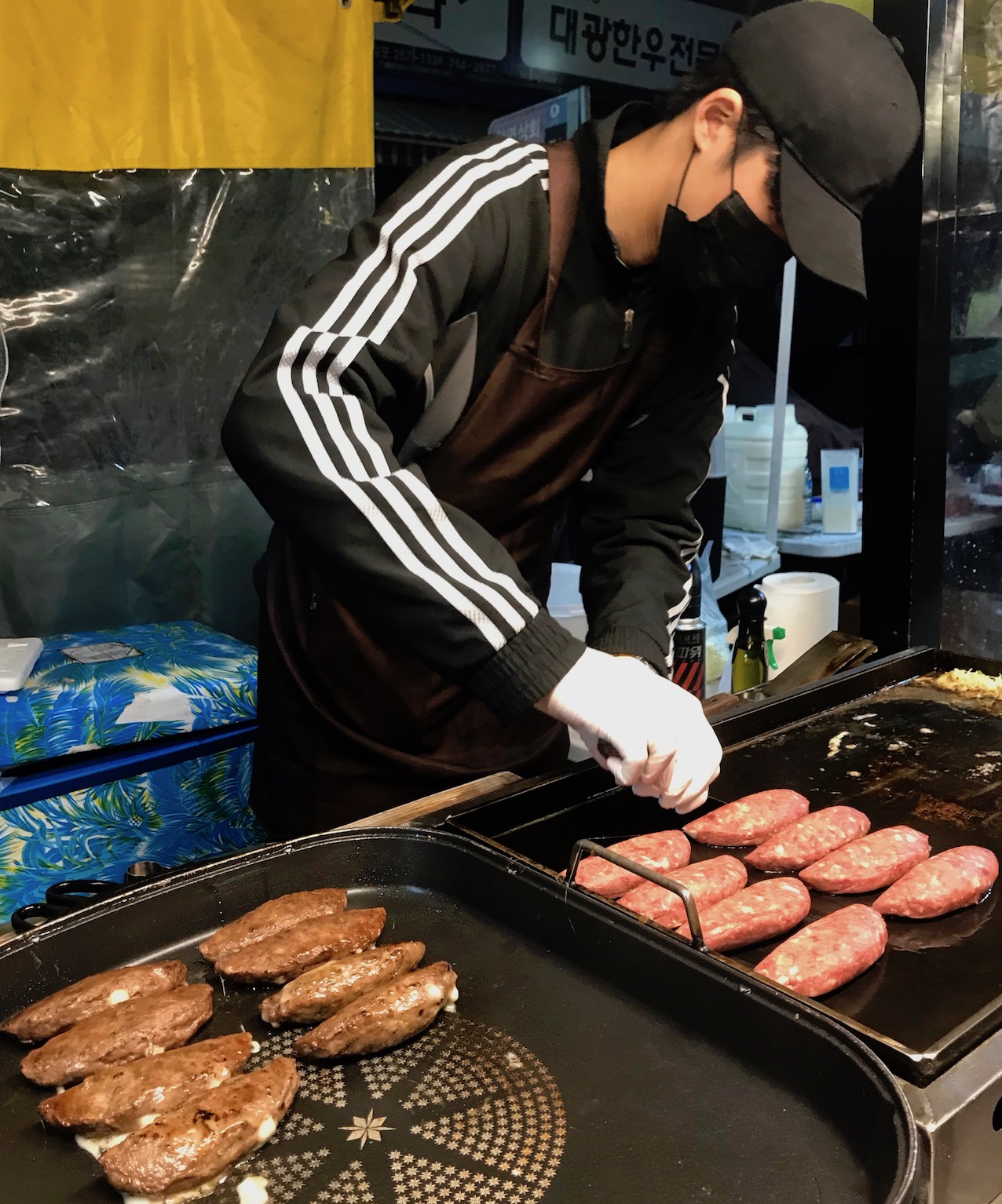 At another stall, the speciality was juicy chunks of sizzling beef stuffed with cheese. If I hadn’t just eaten that colossal turkey leg….

There was also a highly popular sushi station. All you have to do is choose your topping and they’ll put it all together on the spot. Should you opt for beef strips, the lady whips out her flamethrower and gets to work. No messin’ 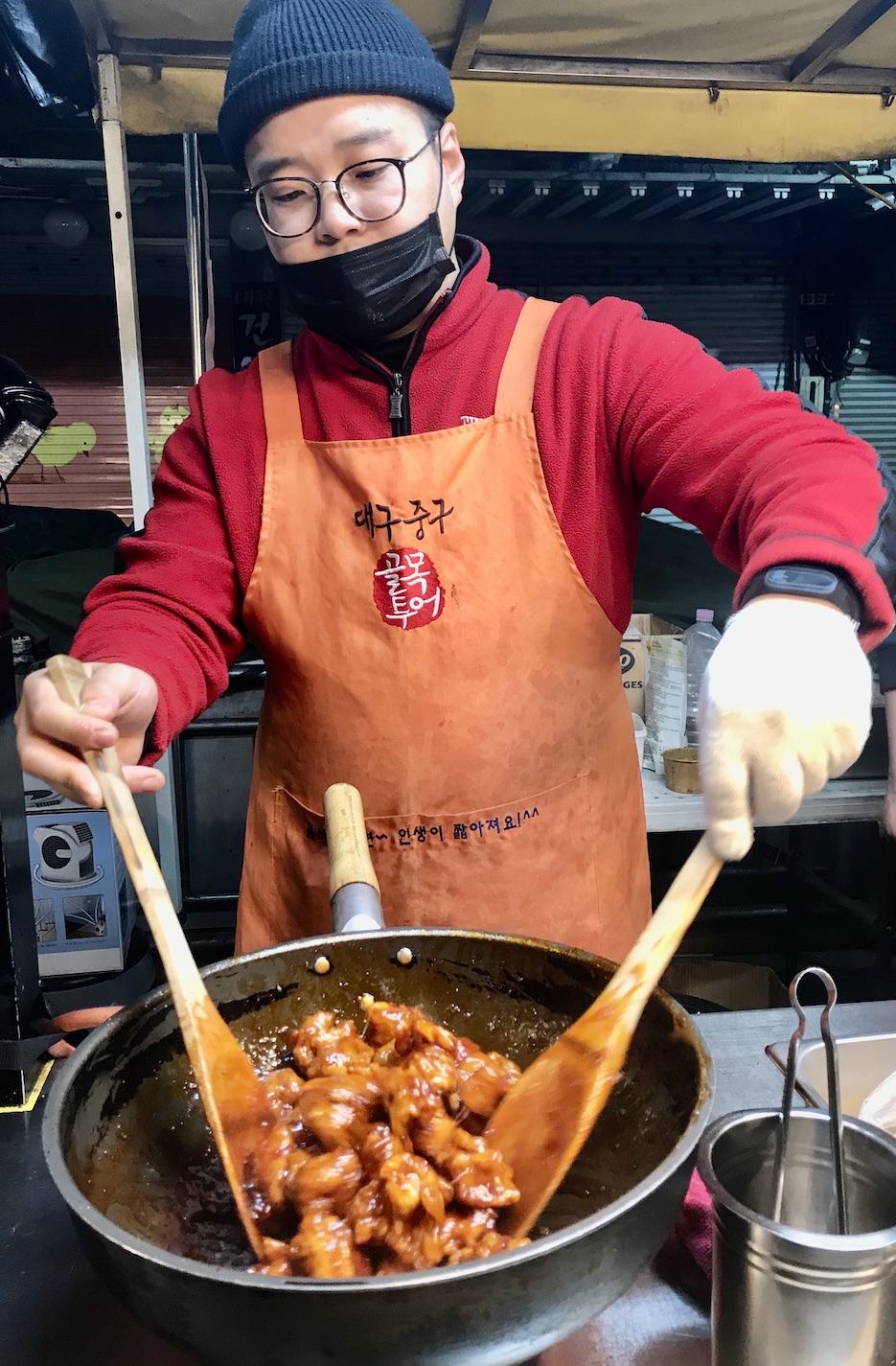 Everything I tried that night was amazing. Furthermore, it’s clear you could come here at least a dozen times and not eat the same thing twice.

Unfortunately, my memories of the market will always be a little tainted by my regretful misadventures in bag shopping. I was in need of a hefty holdall for my upcoming flight from Seoul to London.

The bag I chose seemed fine, I even tested it out. But sadly the handle collapsed on me during its maiden voyage from Daegu to Jeonju. In all my years of Asian market shopping, this was my first major fail. 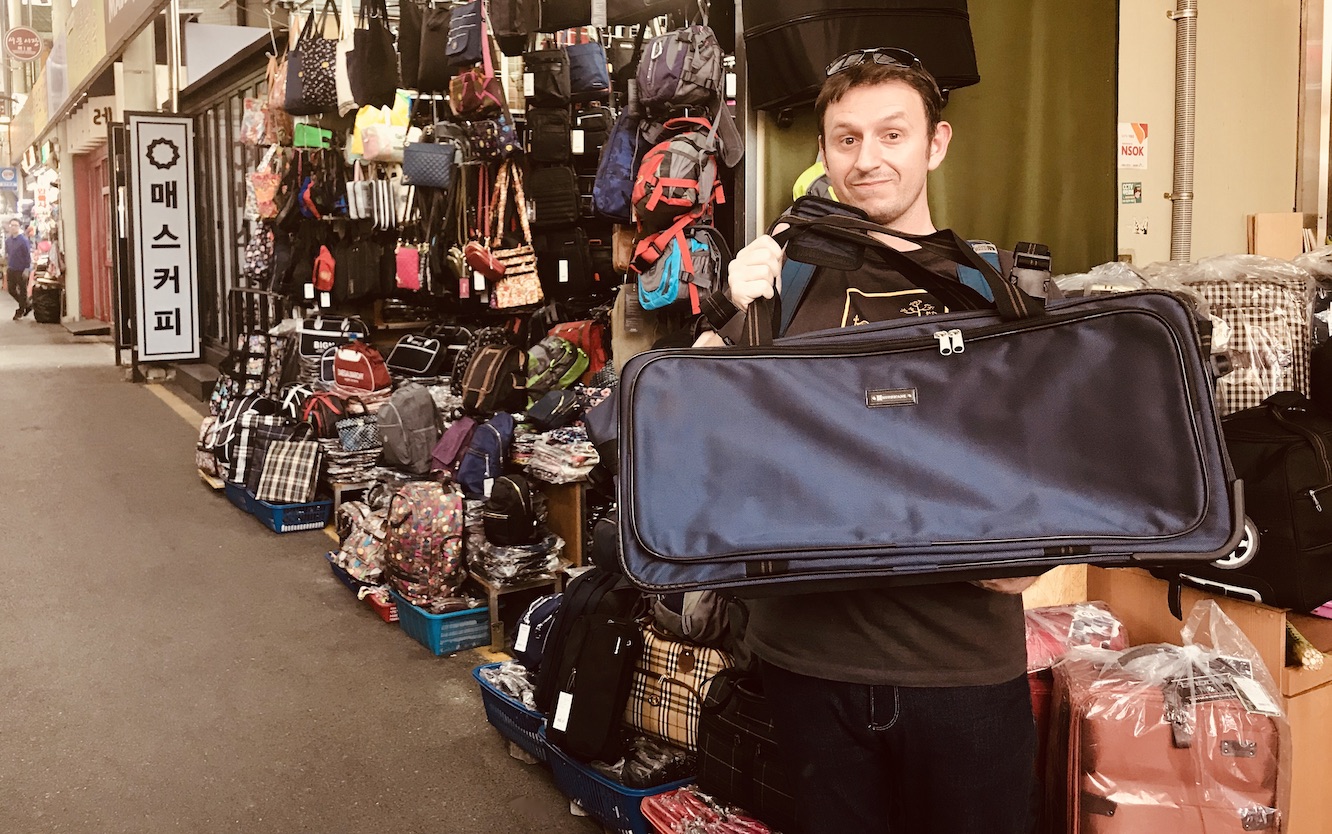 Pleased as punch with my shitty bag.

But how about those cheese-stuffed burgers?

Seomun Night Market is free to enter and open daily (except Sunday) from 19:00-23:30. Prior to COVID-19, it had an extended midnight closing on Fridays and Saturdays. Now, who knows what’s going on. The nearest metro stations are Sinman (Line 2) and Seomun Market (Line 3).