April 2019. The Korean city of Daegu is blessed with a number of local mountain ranges and a seemingly infinite array of hiking options. Some of the most popular routes can be found in and around Apsan Mountain, a 1968-foot peak towering over southern Daegu. This is where Wonderboy, my brother Cory, his fiancée Kaley and I headed one overcast Sunday morning to get the blood pumping.

Prior to my Daegu trip, I’d romanticised about doing a solid chunk of hiking. However, my associates that day were not exactly feeling the Apsan love. Firstly, Wonderboy’s ankle was causing him some problems. Moreover, Cory and Kaley were channeling a special brand of knackered you’d expect to see after an all-night drinking session. 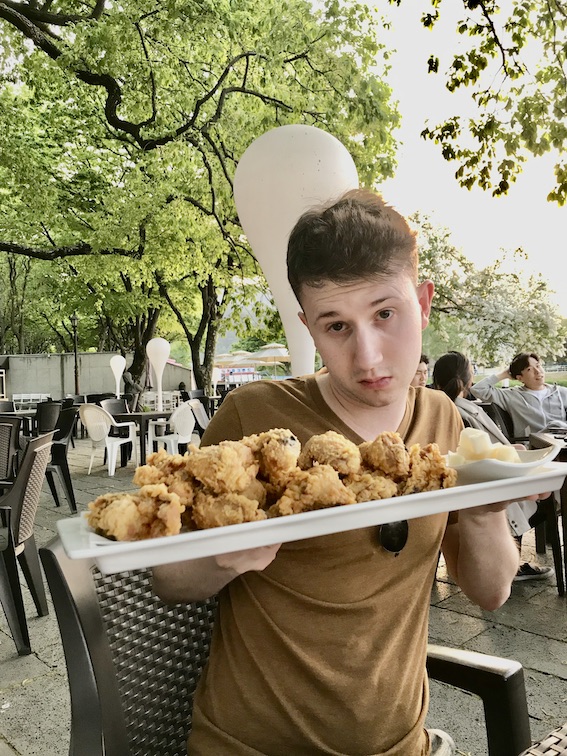 To be fair, we had been out the night before for a few beers. Not to mention the largest amount of chicken I’ve ever seen piled onto one plate. Furthermore, we’d already been walking for well over an hour simply to reach the start of Apsan’s summit trail. 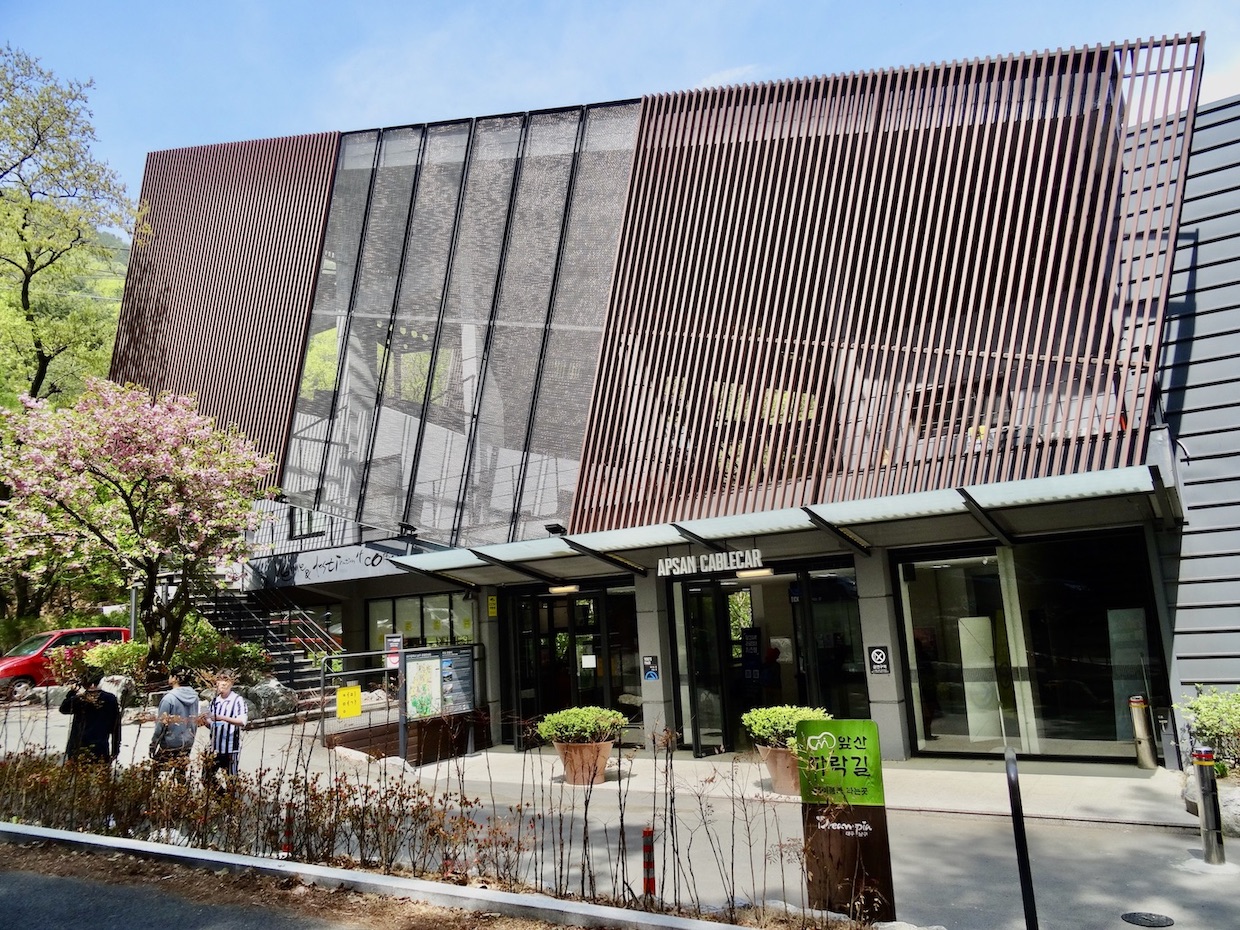 Thus when we arrived at Apsan Cable Car Station, a brief conference was held. Finally, I resigned myself to the fact that I was outnumbered and up we went on the fast track route to Apsan Observatory.

The cable car to Apsan Observatory runs every fifteen minutes from 09:00 to sunset. Round trip tickets go for a very reasonable 9000 won (£5.30/€6/$6.80). Hence we went inside, paid our dues and five minutes later we were whirring through the lush green woodland of the mountainside. 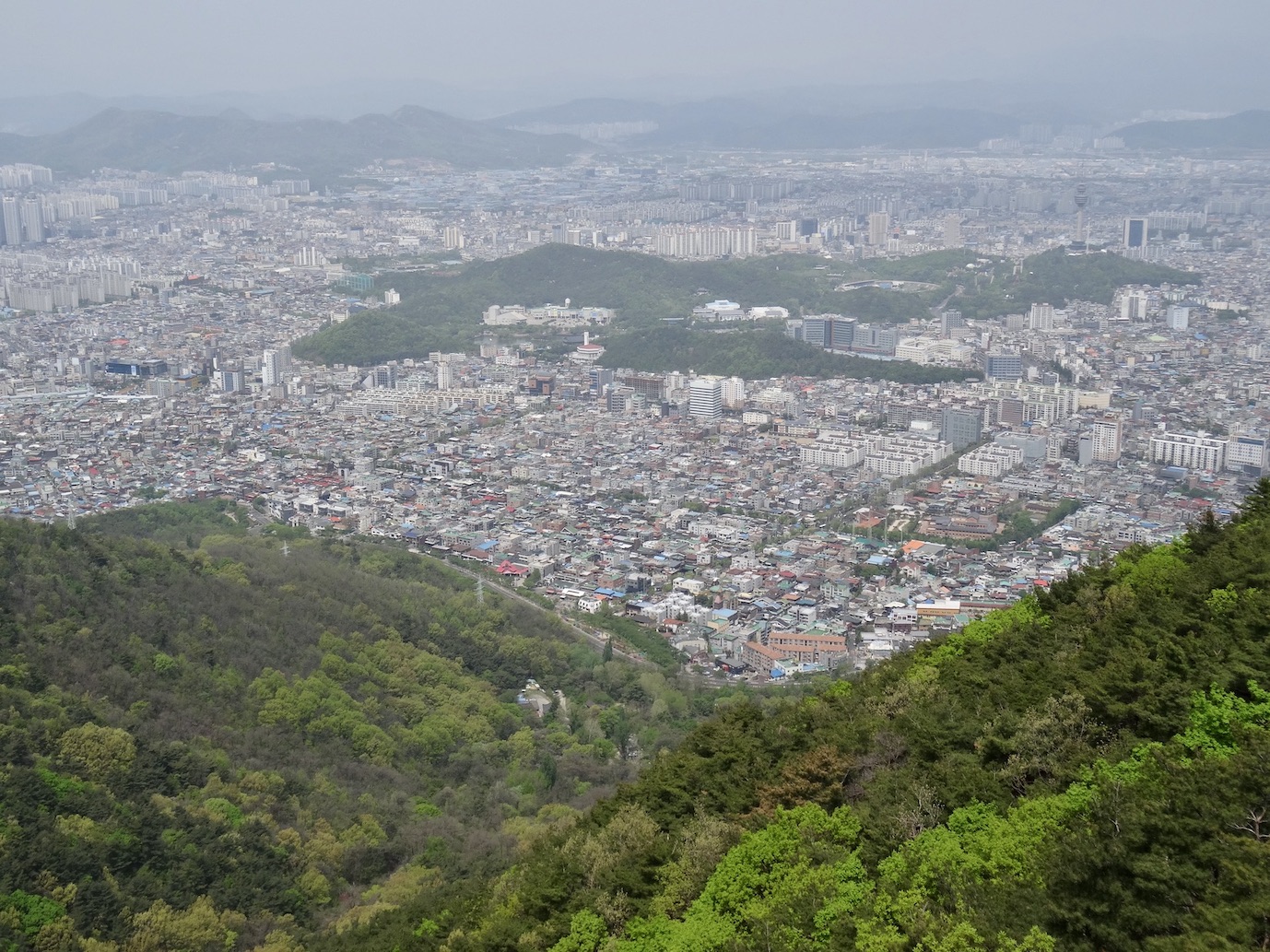 Even on a hazy day like this, the views over Daegu are impressive as you chug up to the observatory. Aptly, the word Apsan literally translates as “mountain before the city”. I’m guessing the panoramic must be fabulous on a sunny, clear, blue sky day. 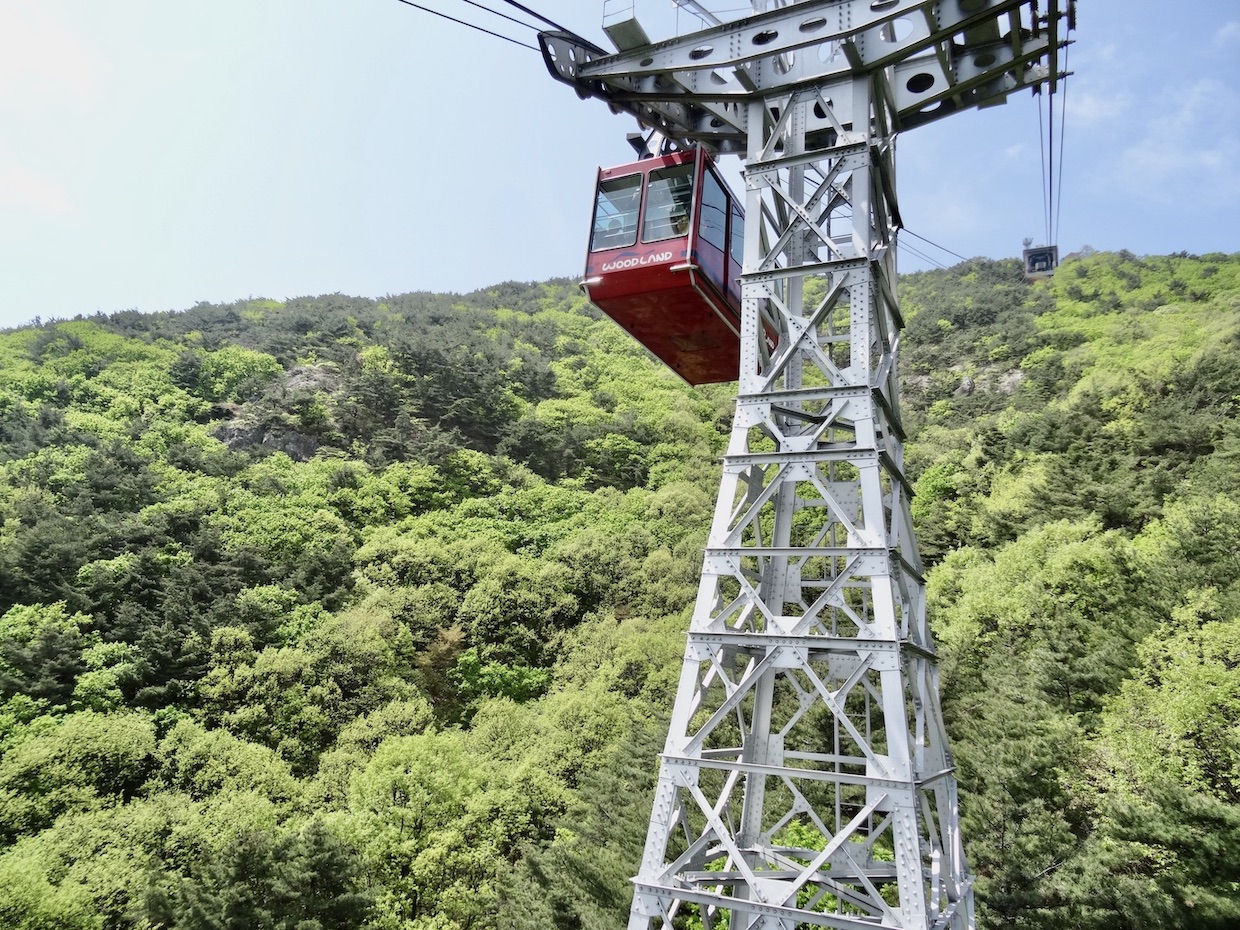 The cable car at Apsan Mountain.

Apsan Observatory has two levels, one of which extends out from the first floor cafe-restaurant. To reach the other, take the short staircase up to the giant, top o’ the rock style platform.

Naturally, the views are wondrous. So much so, that the platform has featured in several movies, as well as the popular Korean TV series What’s Wrong With Secretary Kim? 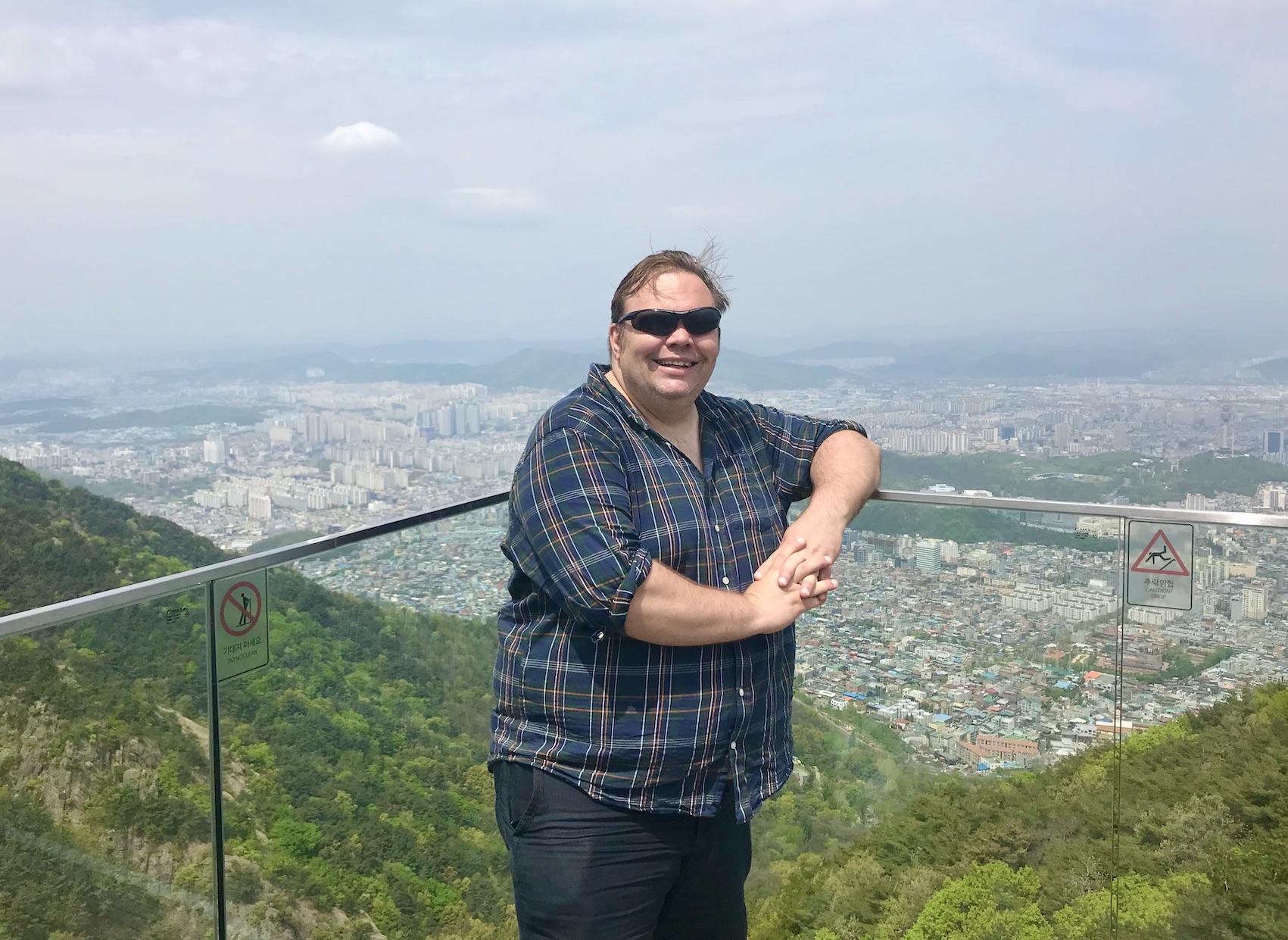 The views, along with a decent cup of coffee, succeeded in blowing away our communal cobwebs. Although the mood did sour somewhat when, moments after the below photo was taken, a giant flying thing flew into Cory and bit him on the arm! 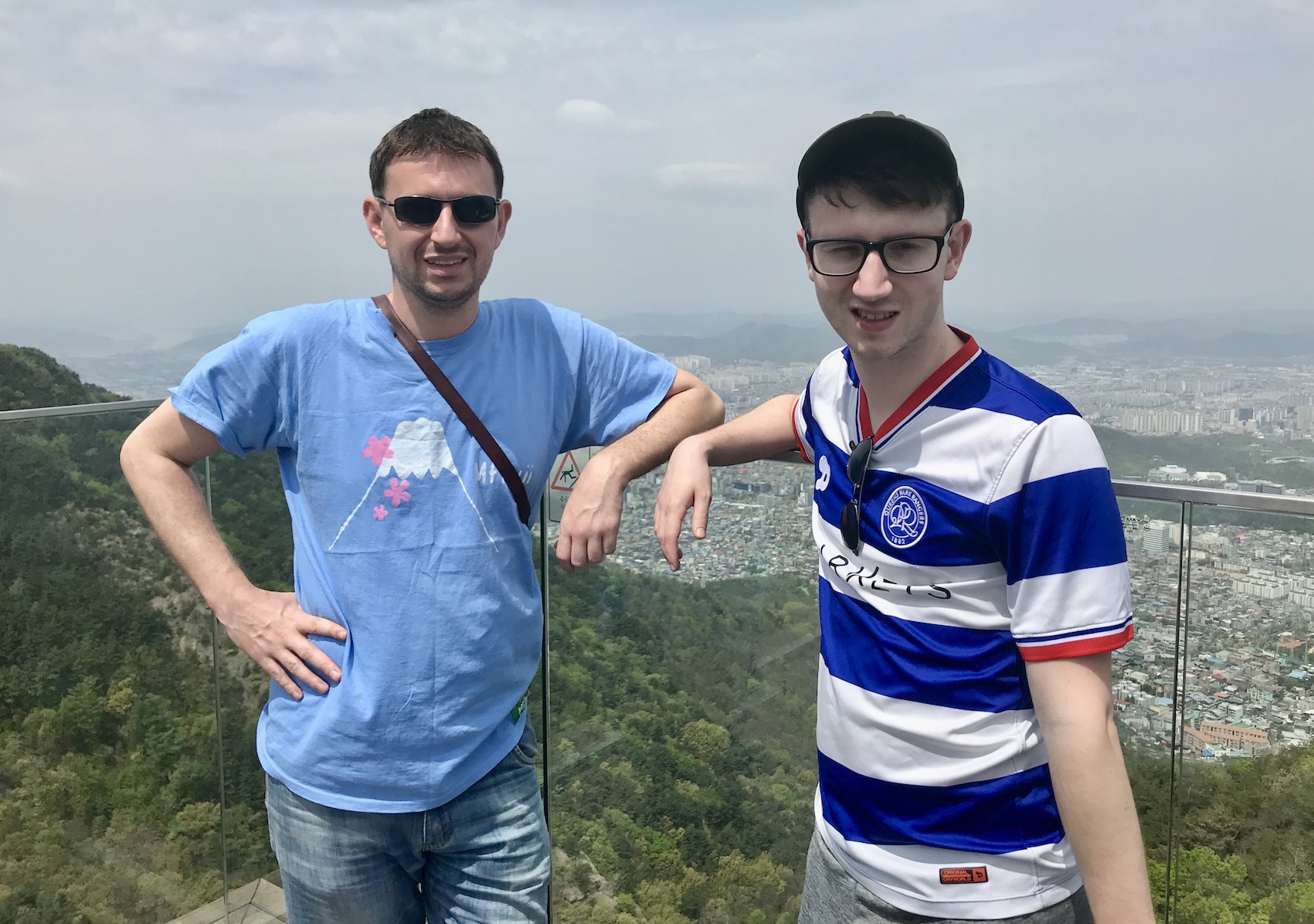 From the observatory you can take the one kilometre trail up to Apsan Mountain’s highest point. It’s very easy going, no special equipment required. Nevertheless, it was fun to see how Korean hikers had equipped themselves as if they were scaling Mount Everest. 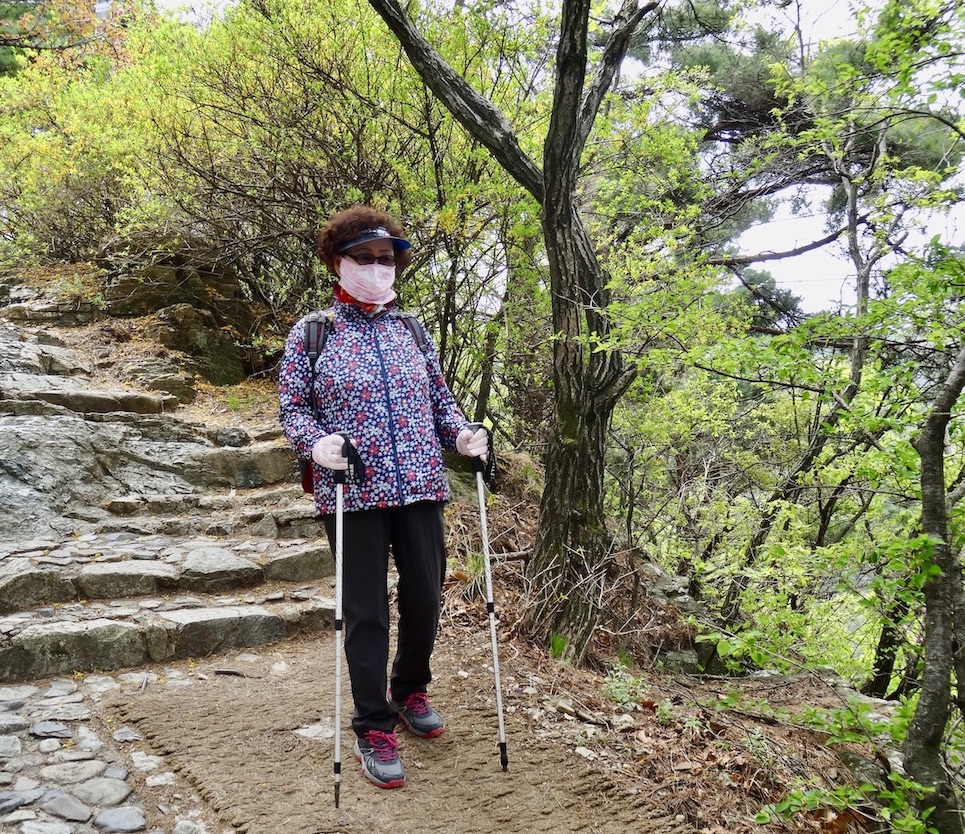 It’s an incredibly pretty walk, with verdant bushes, wild flowers and some fantastic cherry blossom trees. For lovers, a postcard-perfect swing set beneath the drooping branches serves as a popular photo spot. When we passed there was even a queue! 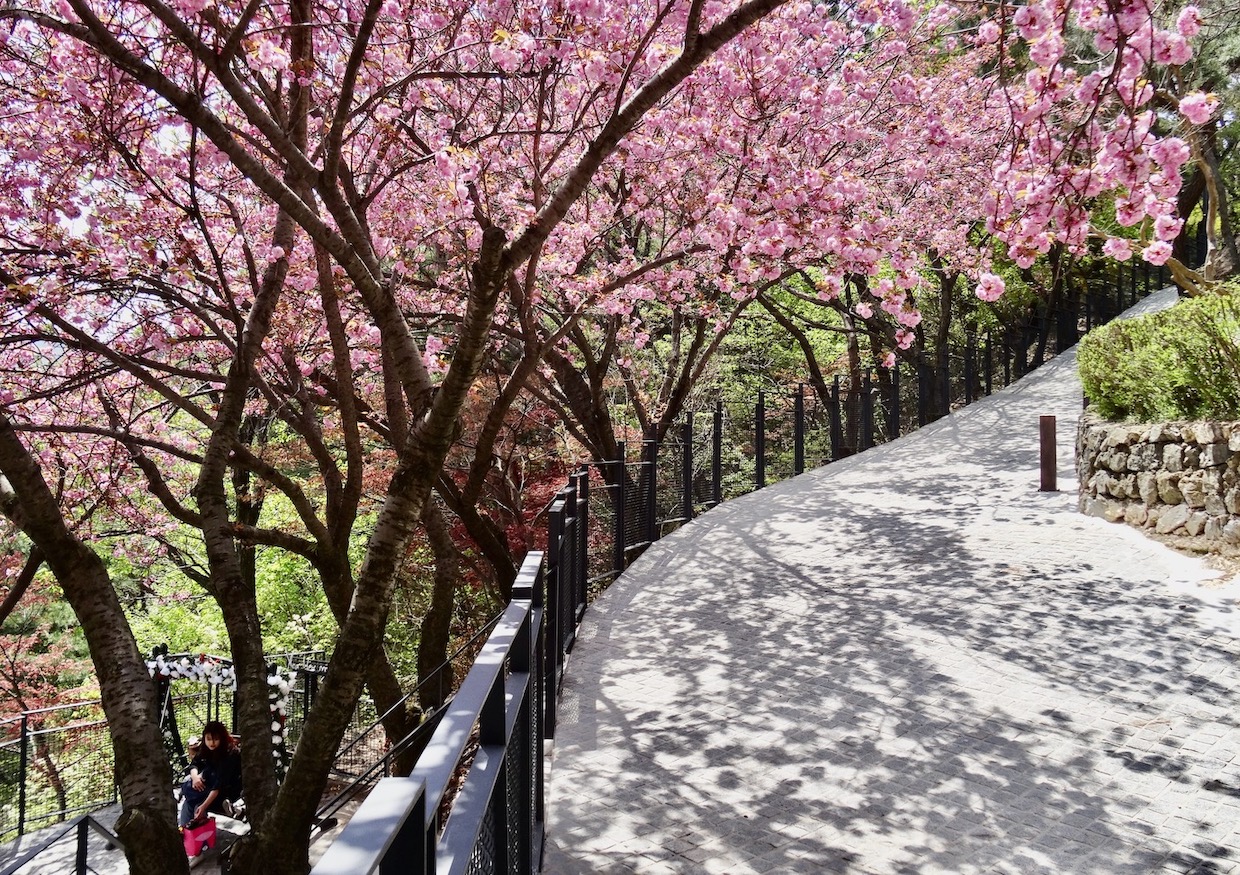 At the top there’s a small, rocky platform, from which you can look back down over Apsan Observatory. The platform is actually part of the ruins of Daegu Fortress. The horseshoe shaped battlement once ran for 3 kilometres across Apsan’s peaks and ridges. 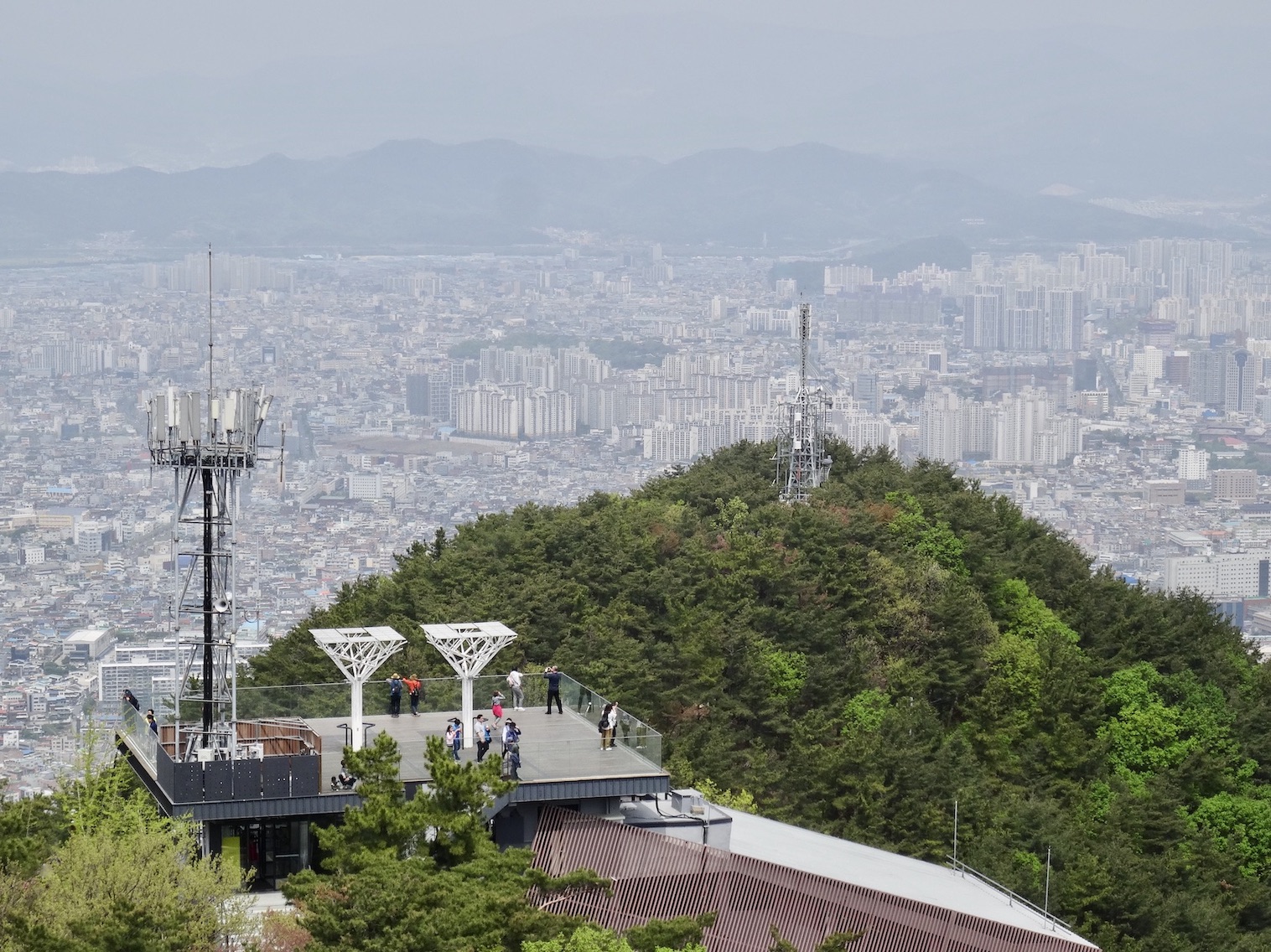 Looking down on Apsan Observatory.

Ok, so I didn’t get my grand hiking adventure. But it was still very cool to get up onto Apsan Mountain and drink in those views. All in all, it was a fine sendoff for Cory and Kaley, who had an afternoon train to catch back to Jeonju. 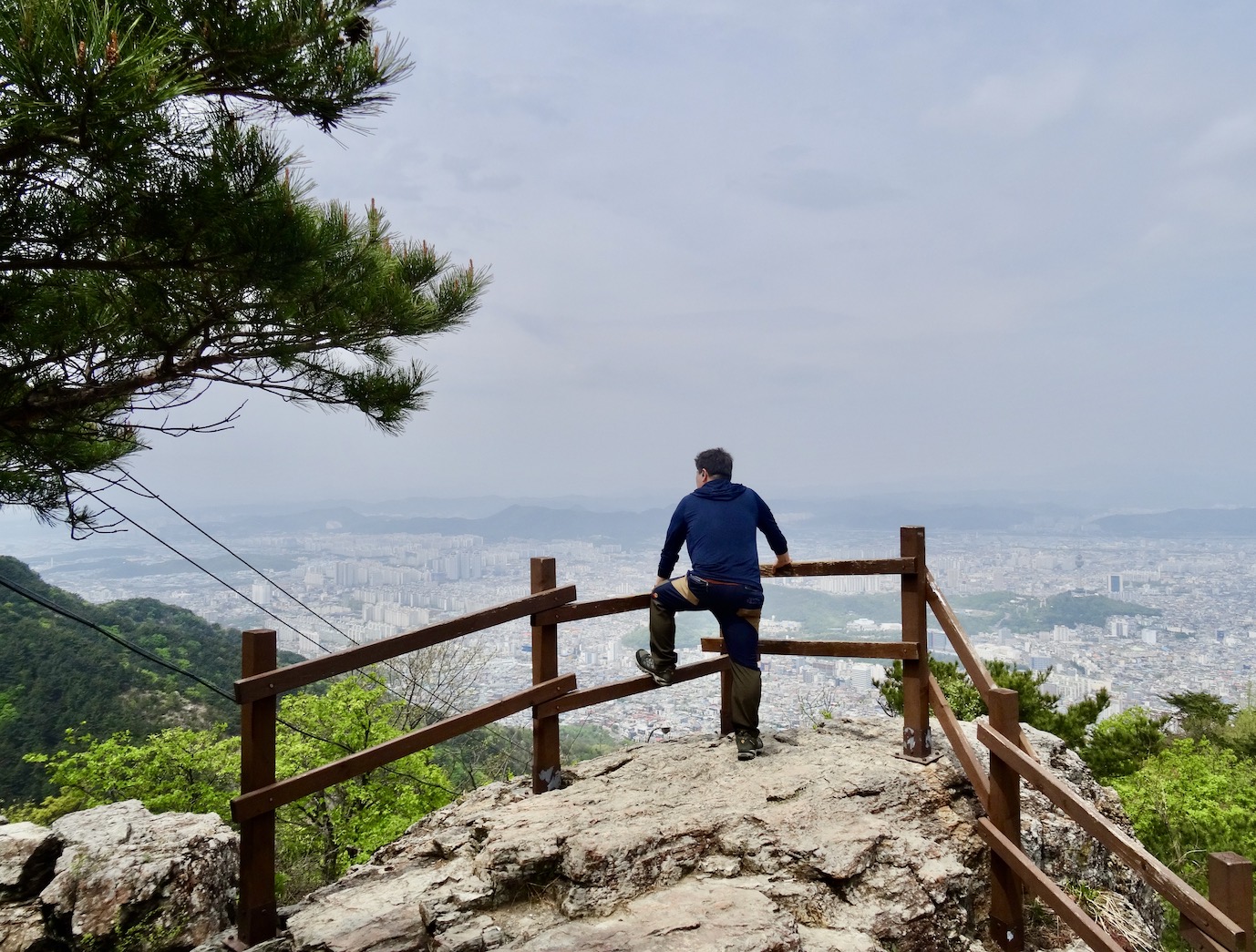 Apsan Mountain’s hiking trails and cable car station open daily within the vast grounds of Apsan Park. By taxi, just tell the driver to head for Ap-san Gong-won (앞산공원).  You’d be looking at a 20 minute journey, at a cost of around 7000 won.

There are also a number of buses to take from the city centre, such as the 300, 410 and 750. We came via the subway’s red line, jumping off at Anjirang Station. Be sure to take exit 3.

For more on what to see and do in this underrated city, check out my travel reports from Daegu.

Like this? Take a look at more articles from around South Korea.