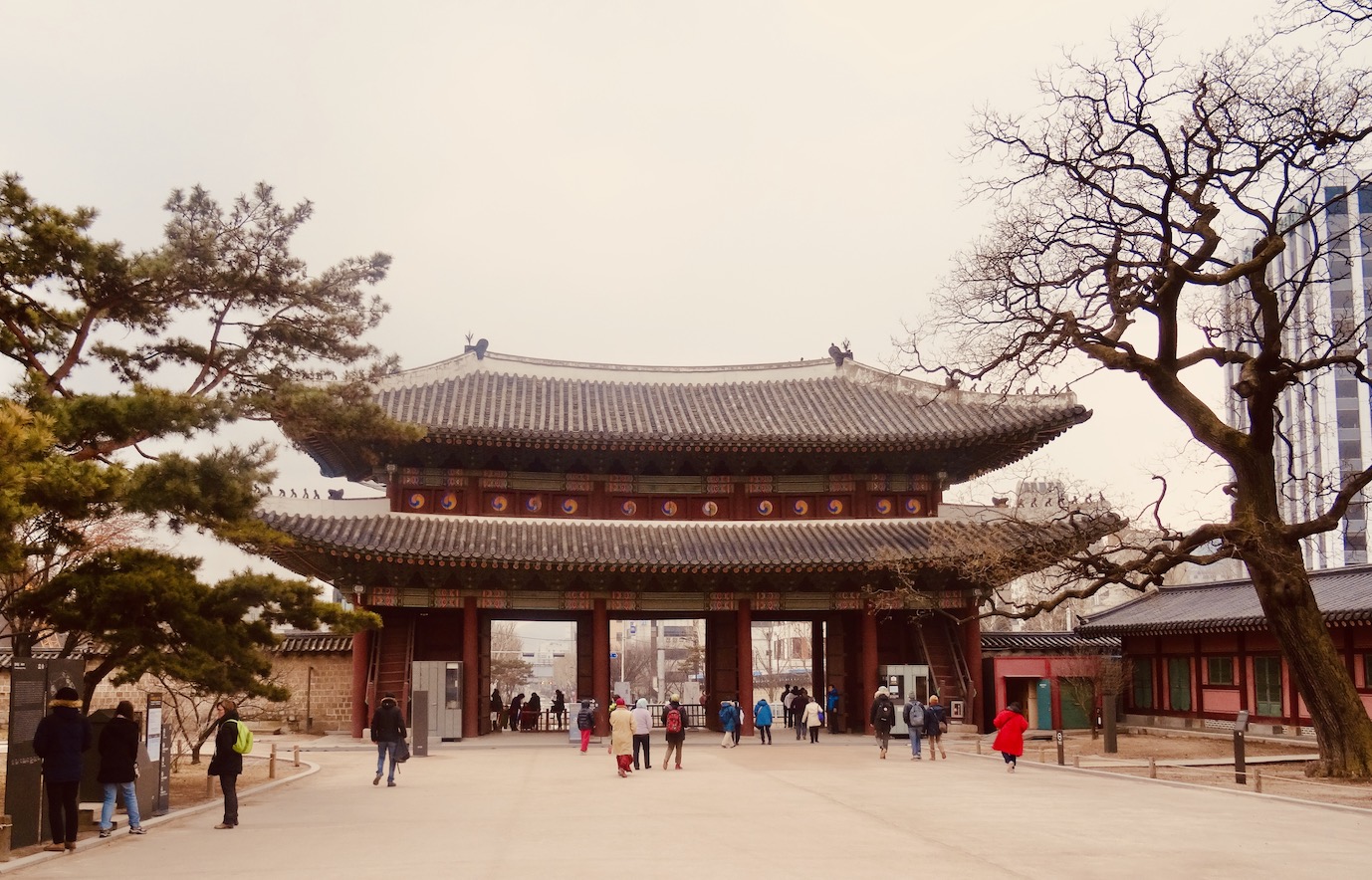 February 2015. It was an exceptionally wintry morning as I approached the modest facade of Changdeokgung in the South Korean capital. The sky was an impenetrable sheet of grey, with a cutting bite in the air that succeeded in nipping away at my neck through my scarf.

Visitors to Seoul have no less than five grand Joseon Period palaces to check out. If I were doing the city today, I’d gladly gobble up all five. Back in 2015 however, I seemed content ticking off just one. I’d read that Changdeokgung is the most beautiful. Furthermore, it’s the only palace to have received UNESCO World Heritage status. 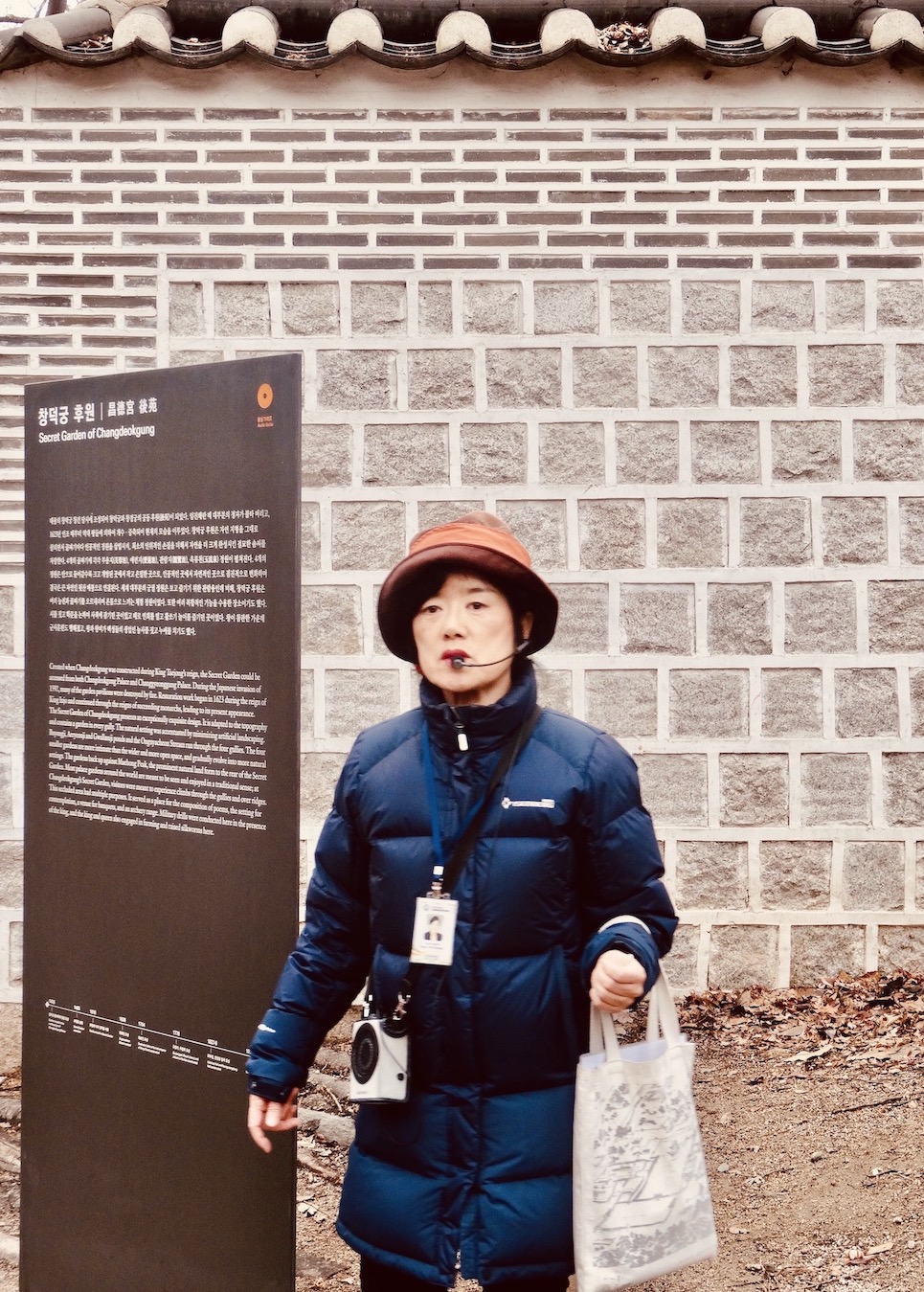 Seeing Changdeokgung as part of a guided tour is mandatory, you don’t have a choice. I opted for a visit that included a walk through Huwon, the so-called Secret Garden.

There were about a dozen of us assembled at the main gate, Donhwamun, when a tiny Korean woman arrived to greet us. She was polite enough but rather businesslike, immediately launching into a list of all the usual rules. No littering, don’t wander away from the group etc.

After that, she briskly launched into an historical overview, revealing that Changdeokgung is the second oldest of Seoul’s palaces. King Taejong ordered its creation in 1405, with construction finally completed seven years later. 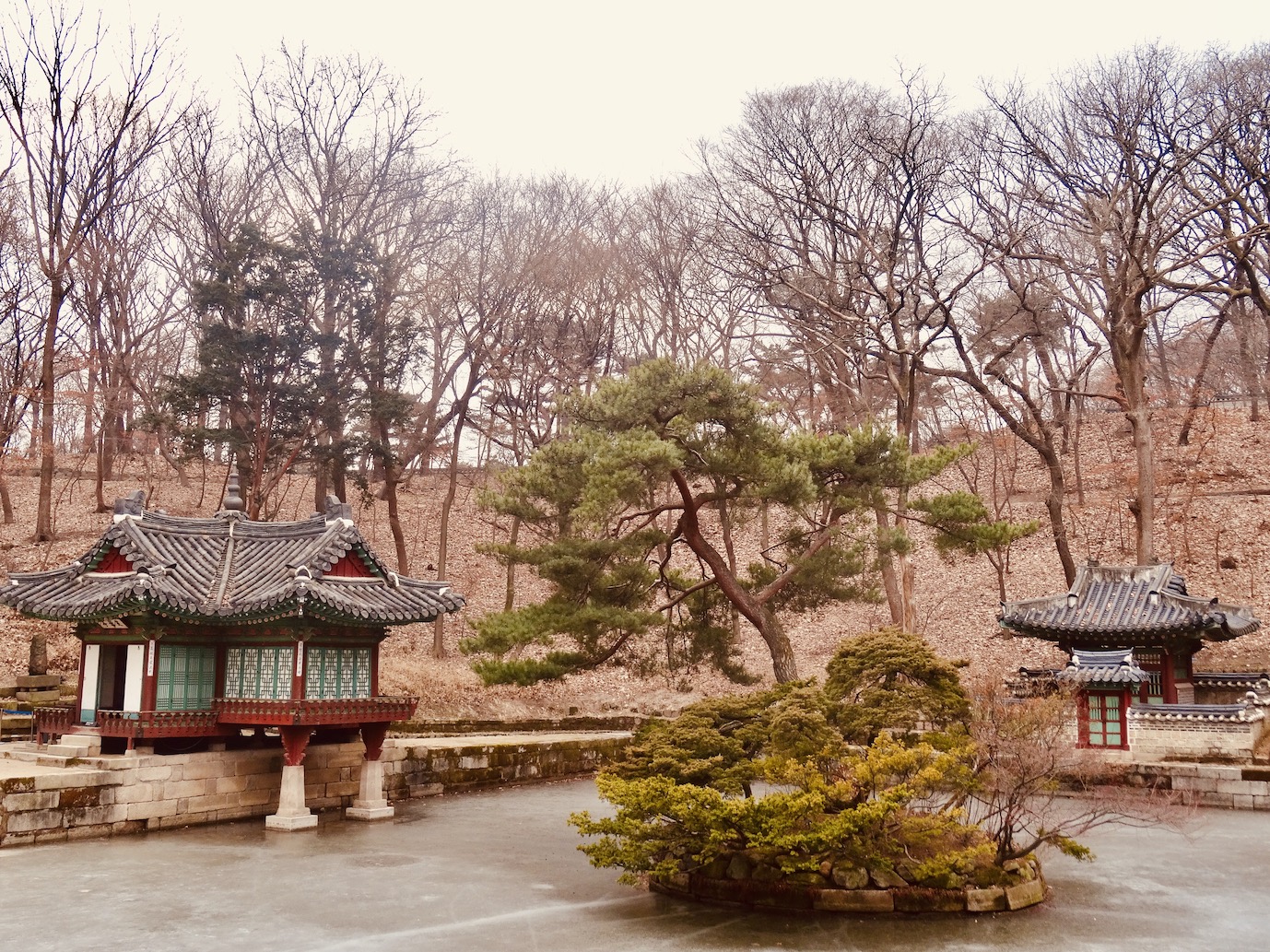 The first thing I noticed is that the palace isn’t very palatial. In fact, most of the complex is quite sparse, with just thirteen buildings remaining throughout the grounds.

This was due to all the typical historical events. In 1592, for example, the invading Japanese Army set the place alight, causing total destruction. 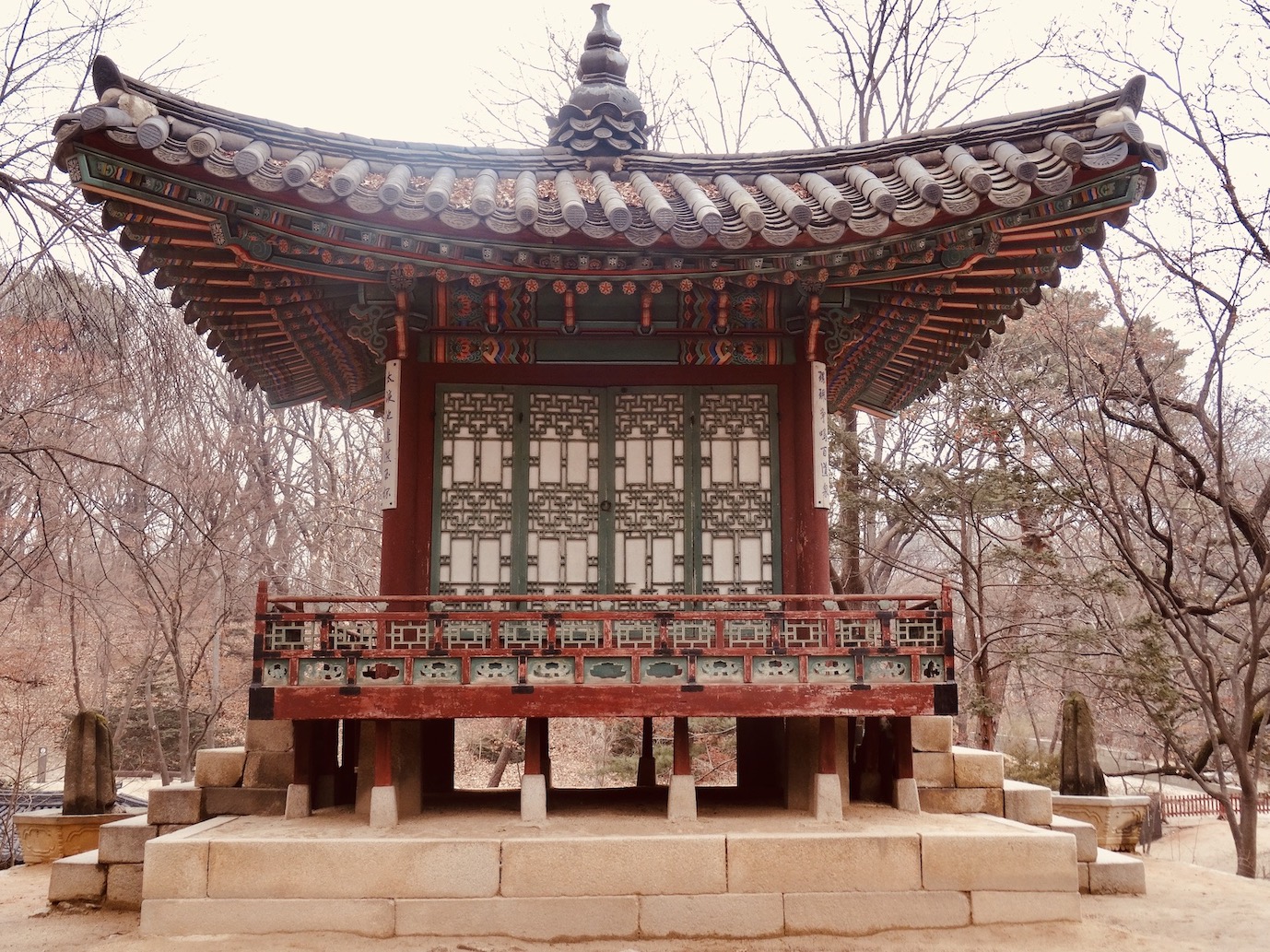 Following its reconstruction in 1609, the palace burnt down again during political revolts in 1623. Look through its timeline and you’ll see a near relentless barrage of attacks in the centuries that followed. It’s a tough old life being a palace. 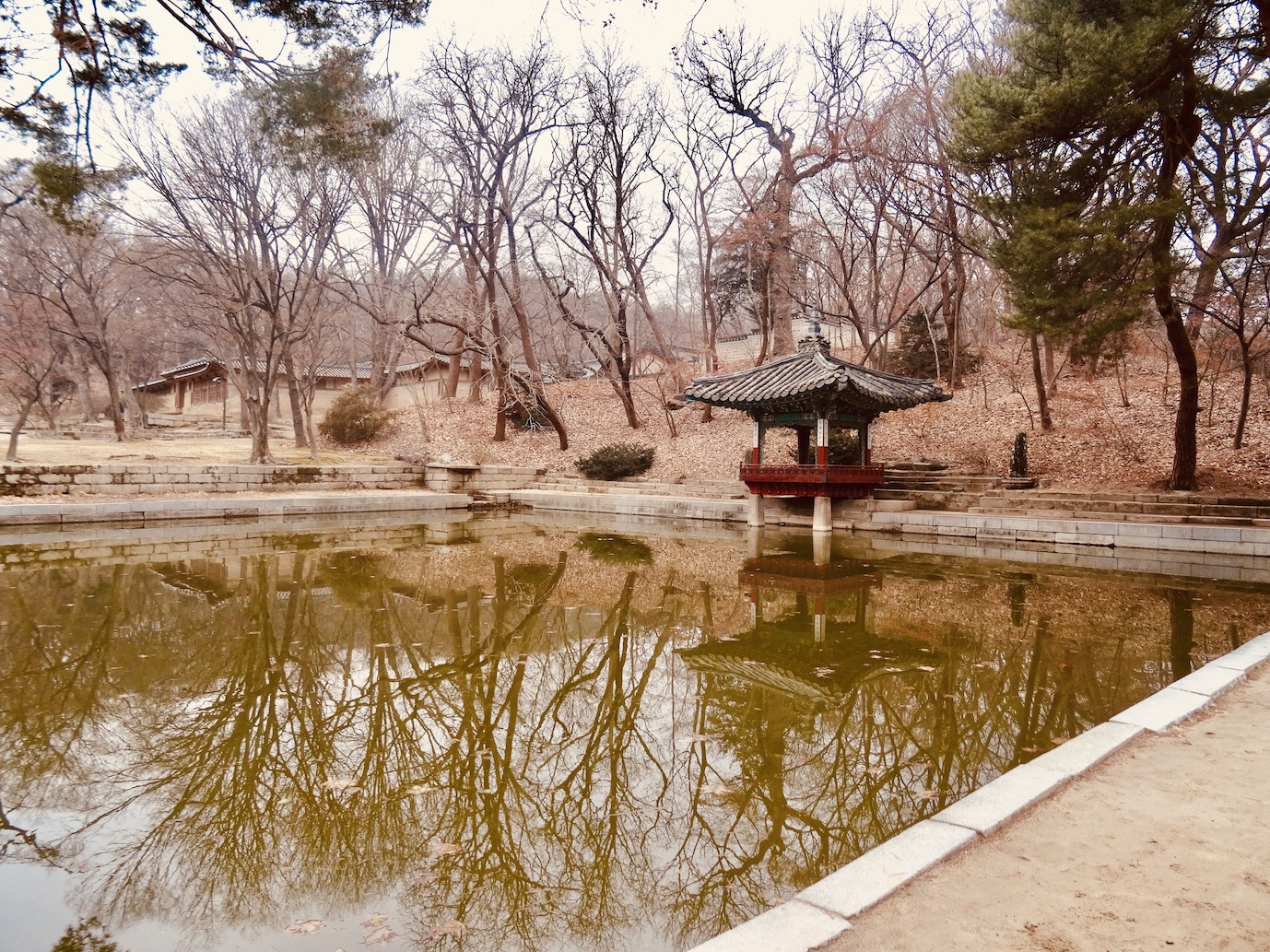 Nevertheless, there’s no doubting Changdeokgung’s beauty. The pavilions, shrines and residential buildings that remain sit elegantly in light woodland, the different sections broken up by a succession of pretty ponds. For me, a somewhat ghostly vibe prevails, a sensation only heightened by the wintry setting.

“The palace is MUCH prettier in the summer” our guide explained. And suddenly I saw why she wasn’t on the palace marketing team. 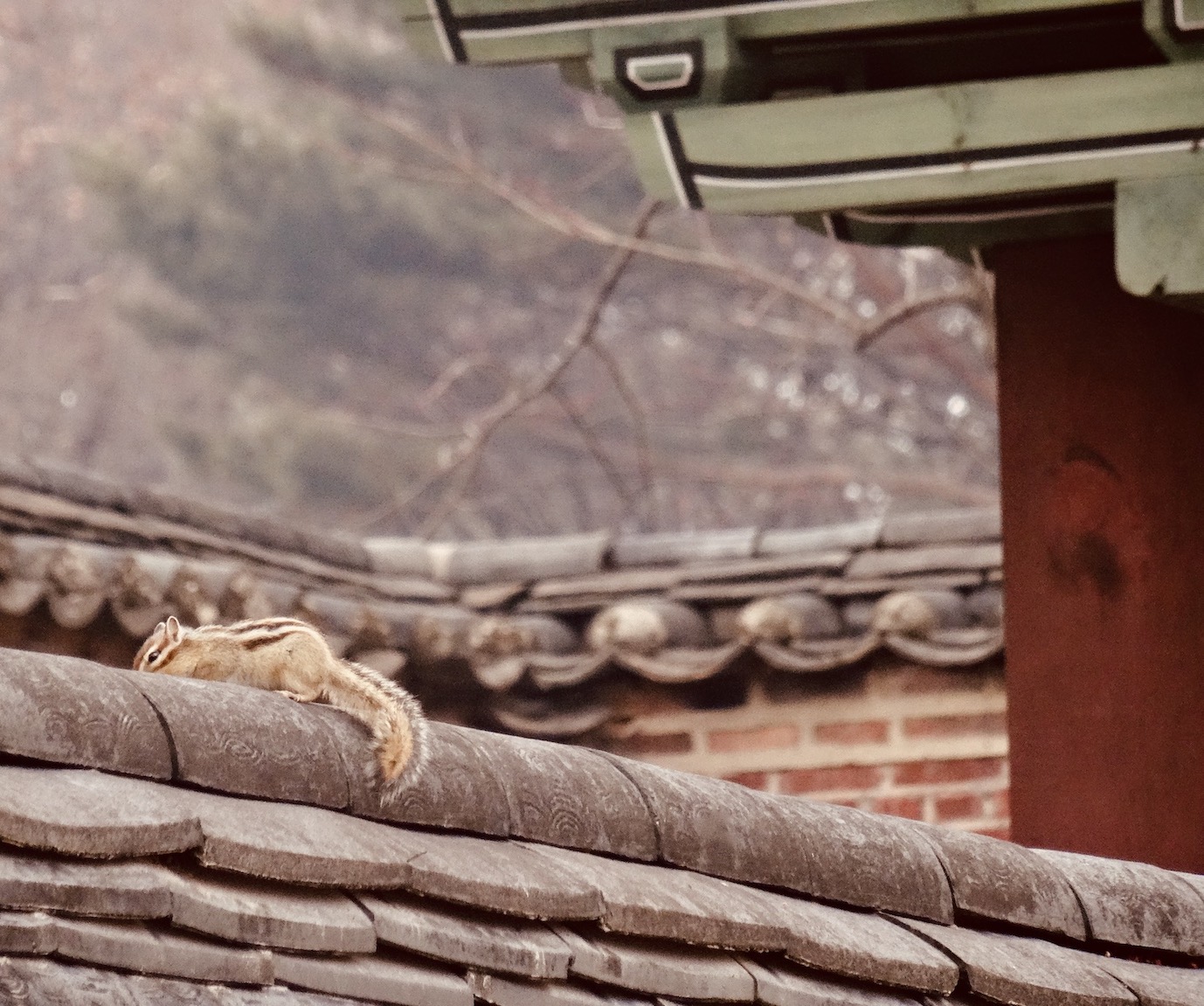 As we made our way, I spotted several grey squirrels darting between branches and across the tiled garden walls.

Moving into more recent history, our guide told us that Changdeokgung was the site of the royal court and the seat of government until 1868. Moreover, South Korea’s last emperor, Sunjong, lived here until his death in 1926. 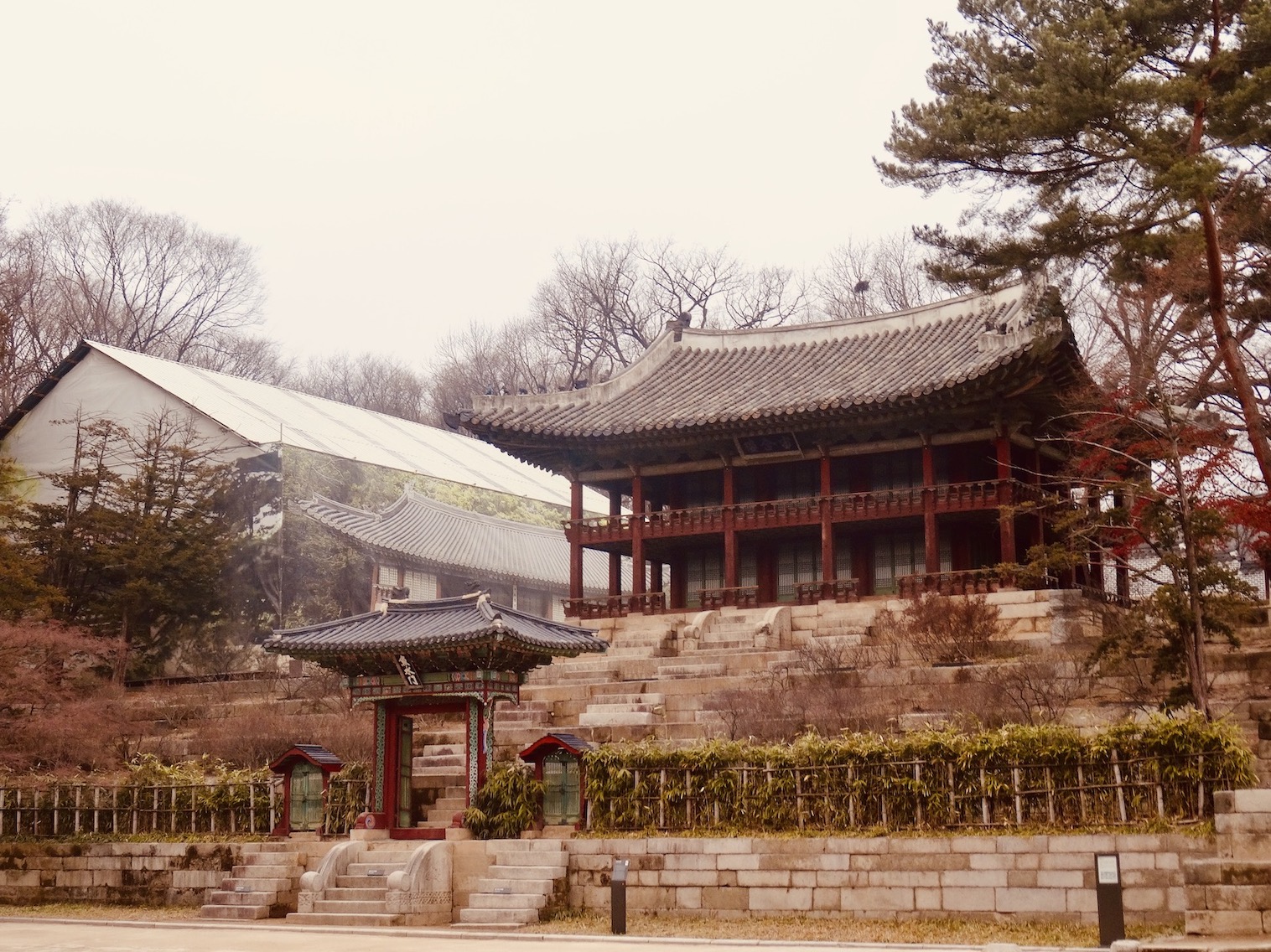 One of the finest buildings here is Juhamnu Pavilion, a former palace library. Sadly, it wasn’t possible to enter, hence we had to make do with admiring it from afar.

Note the three gates at the foot of the stairs. The big one was for the king, the little ones for everybody else! Ah, privilege. The king would also use the gate as an elevated point from which to observe military parades and address his troops. 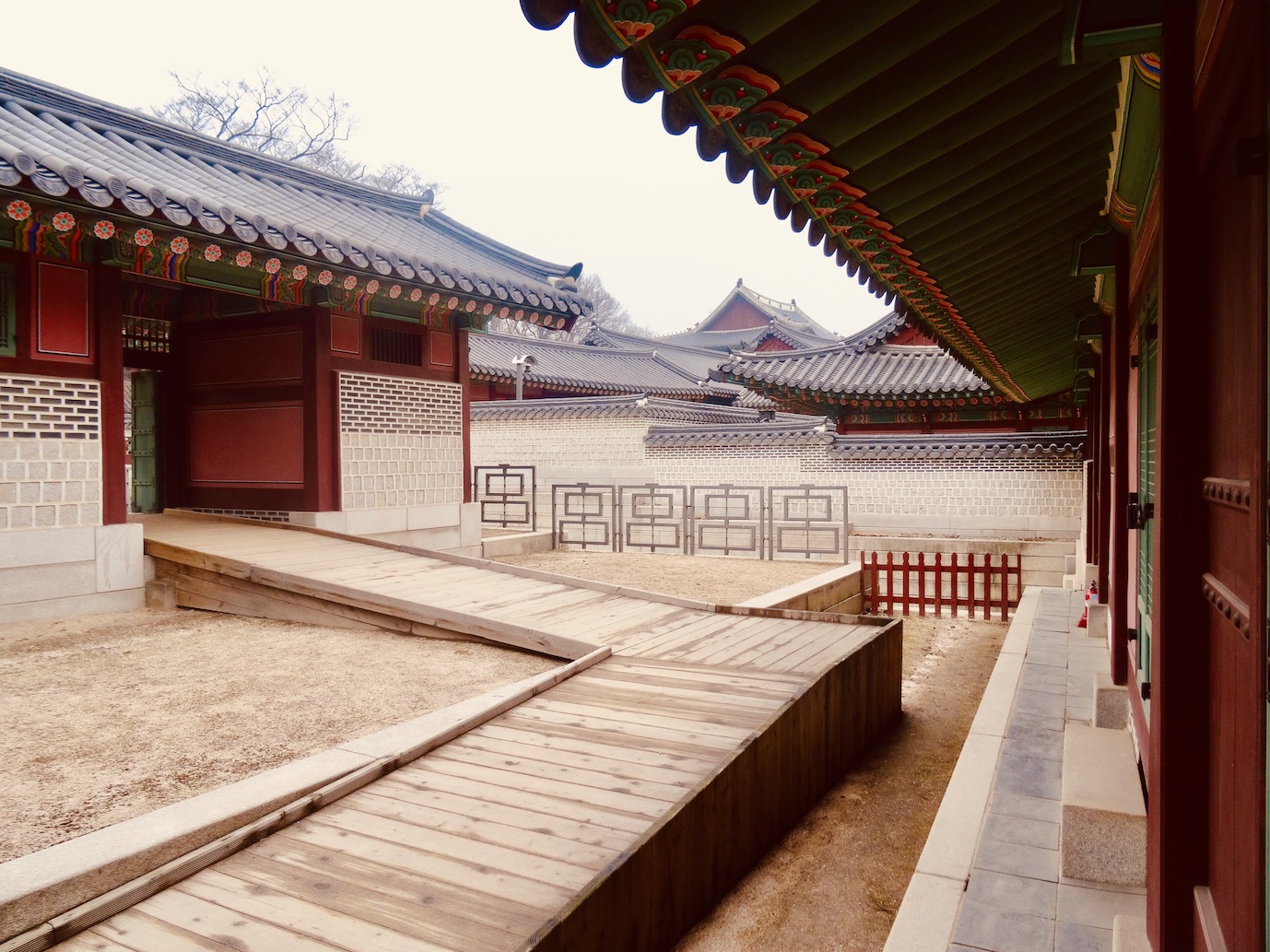 Our tour also included a walk through a compound of government offices dating back to the mid 1800s. Disappointingly, all the buildings were inaccessible.

Thus we simply followed the wooden boardwalk, admiring the beautifully restored facades and curvy roofs. In many ways, it reminded me of the amazing architecture at Beijing’s Forbidden City. 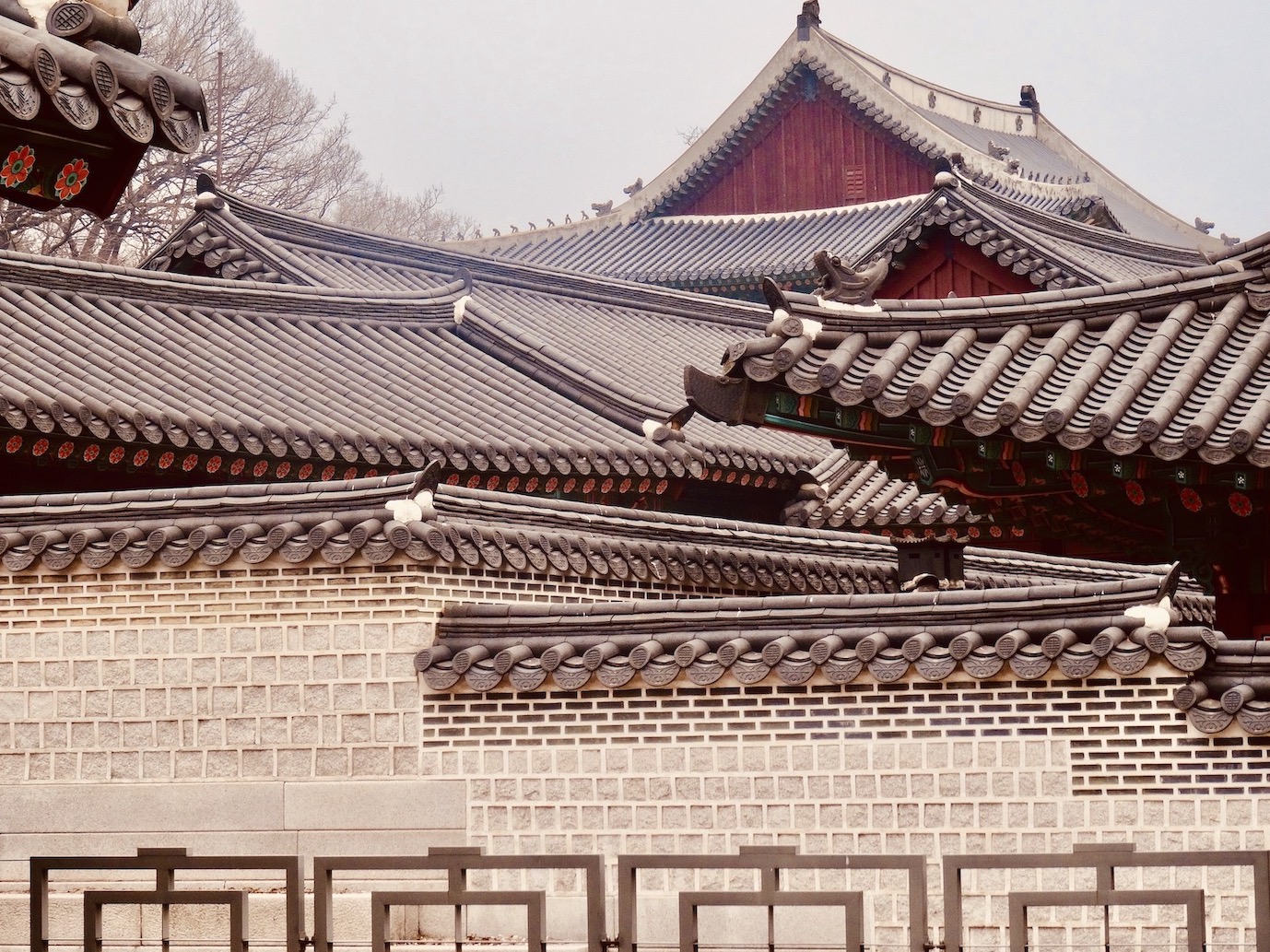 Some of the details are lovely, such as the painted green and red flowers. Some structures have sculpted animal figurines worked into the roofs. They’re called Japsang and were added to protect people from evil spirits. The sculpted animals range from lions, dragons and giraffes to unicorns, phoenixes and monkeys.

The Secret Garden is huge, taking up almost 60% of the entire palace grounds. Essentially, this was the king’s private playground. A place to stroll, read, reflect and get away from it all.

Even his private advisers couldn’t enter without his approval. On special occasions, he used the garden to host great feasts, archery tournaments and firework displays that could be seen across the city. 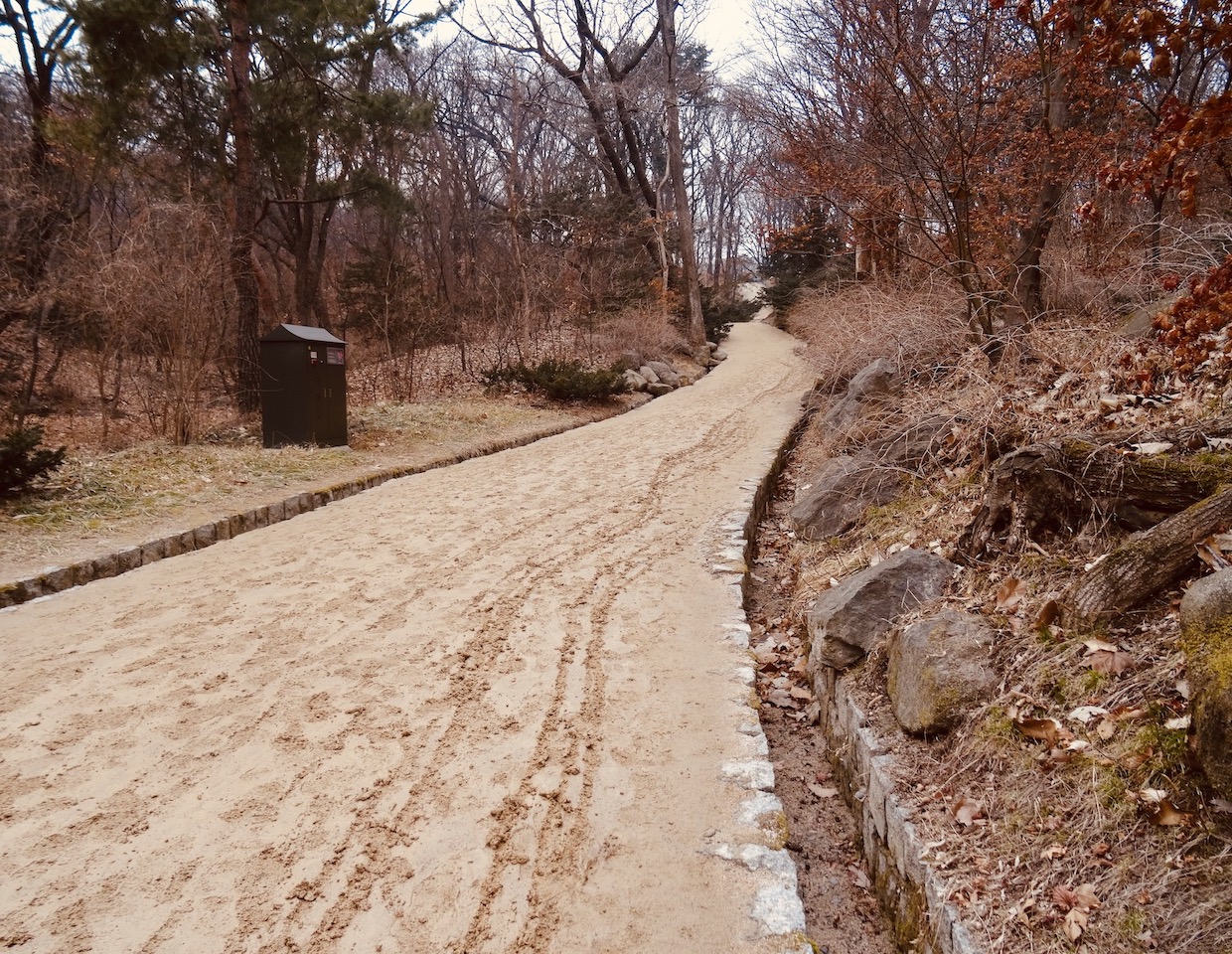 It’s a very pretty trail, even in the stark winter, taking in woodland, streams, ponds, rockeries, bridges, fountains and pavilions. Once again our guide was keen to stress that… in the summer…. wow! Etc.

Admittedly, it was a little tough negotiating parts of the garden that day. Some of the way was horribly muddy, while there were also precarious patches of black ice. Still, it felt pleasing to feel the crunch of frozen leaves and twigs under my feet. Looking back, I wish I’d taken the time to see at least a few more of Seoul’s palaces. Next time… 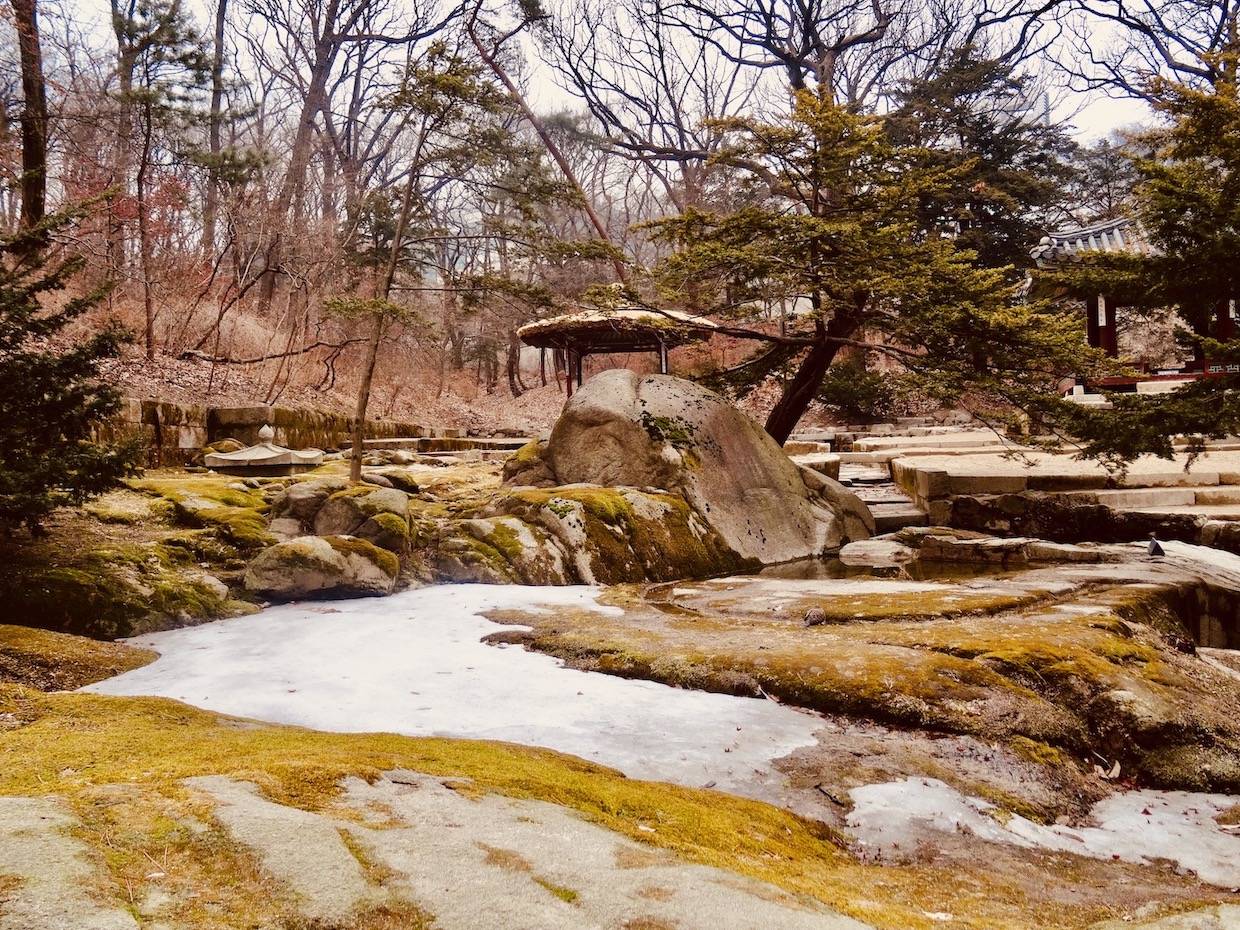 Changdeokgung Palace opens daily, except Mondays. From what I understand, parts of the complex are unavailable in the winter months.

On top of all that, they’re running on a reduced program during these uncertain COVID-19 times. As a result, it’d be wise to book ahead. For all the info on opening hours and costs, check out their official page.