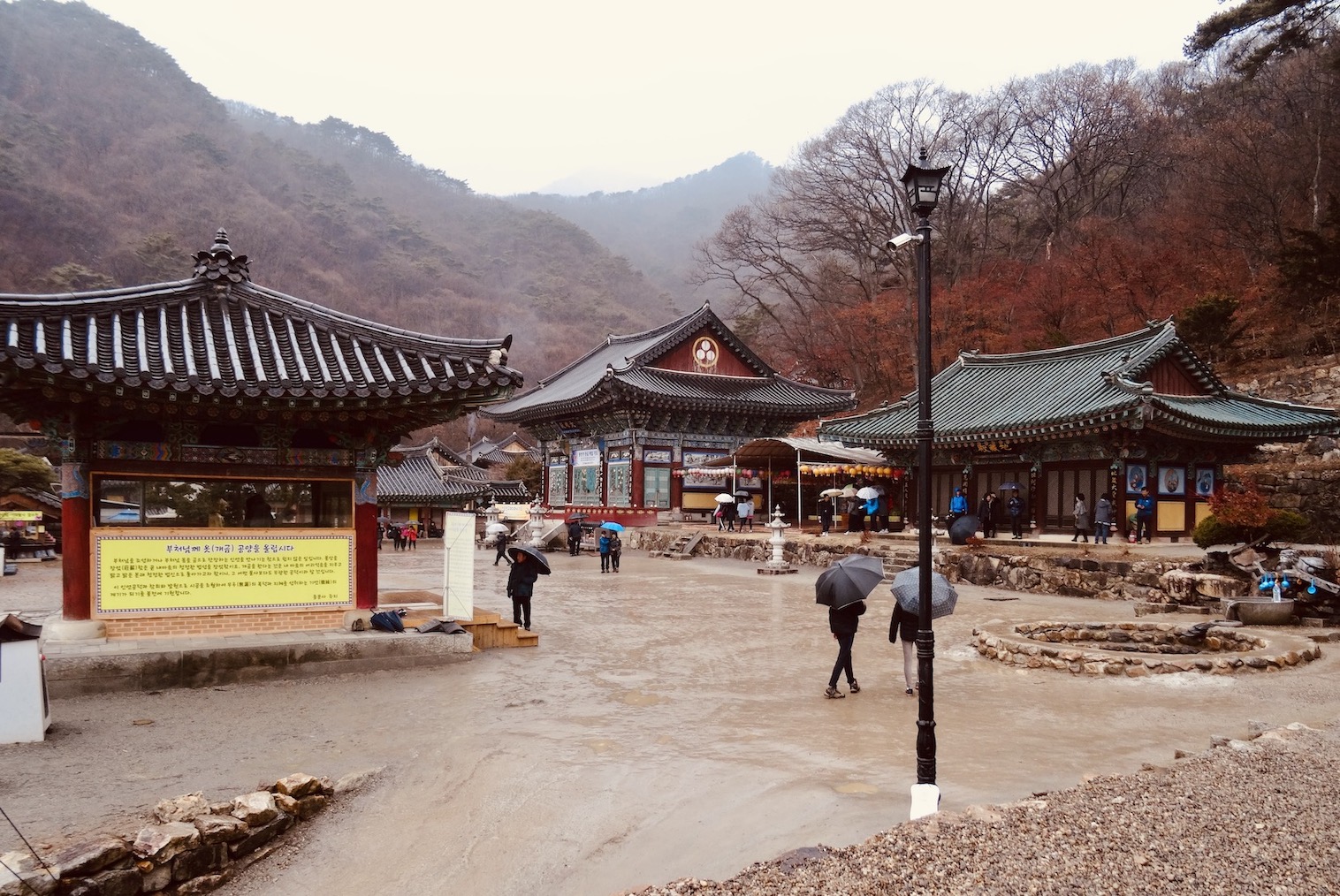 February 2015. I got so lucky with my trip to Seoul. Firstly, I had a room for free, courtesy of Irish Andy, a friend of a friend. Then, one afternoon, a bunch of Andy’s buddies took me hiking up Ingwansan Mountain. A larger group of expats also invited me out to some city bars, culminating in an essential night of noraebang (Korean karaoke). My trip certainly benefited from having so many local connections.

And then there was River, a Seoul-born Korean who was keen to meet and take me “somewhere you wouldn’t think of”. Right enough, I hadn’t heard of Yongmunsa Temple, a Buddhist structure located in a beautiful mountain valley two hours outside Seoul. Even if I had known about it, there was virtually no way I could have reached it independently. 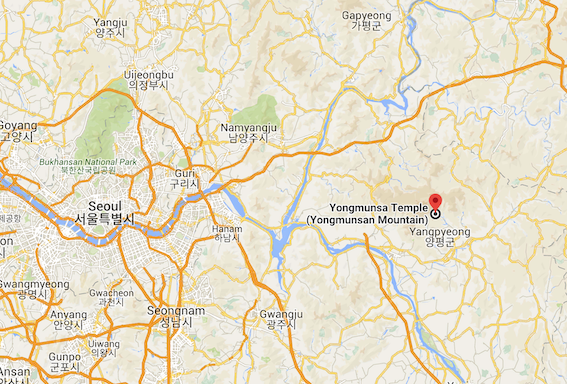 River picked me up early one morning at Andy’s place in central Seoul. Unfortunately, I was very hungover following the aforementioned karaoke session. I’ve never been much of a drinker, hence I was in a bit of a state that morning as we sped off. I can’t imagine I made a positive impression on River, though he was really gracious about it. “Ah I know the feeling” he chuckled. “Coffee and fresh air gonna help”.

Yongmunsa Temple sits deep in the countryside of Yangpyeong Province in a forest valley beneath Yongmunsa Mountain. It took us a while to get out of Seoul, but once we did the drive was a breeze. A mostly straight open road with fields, woods and hills flashing by the window. 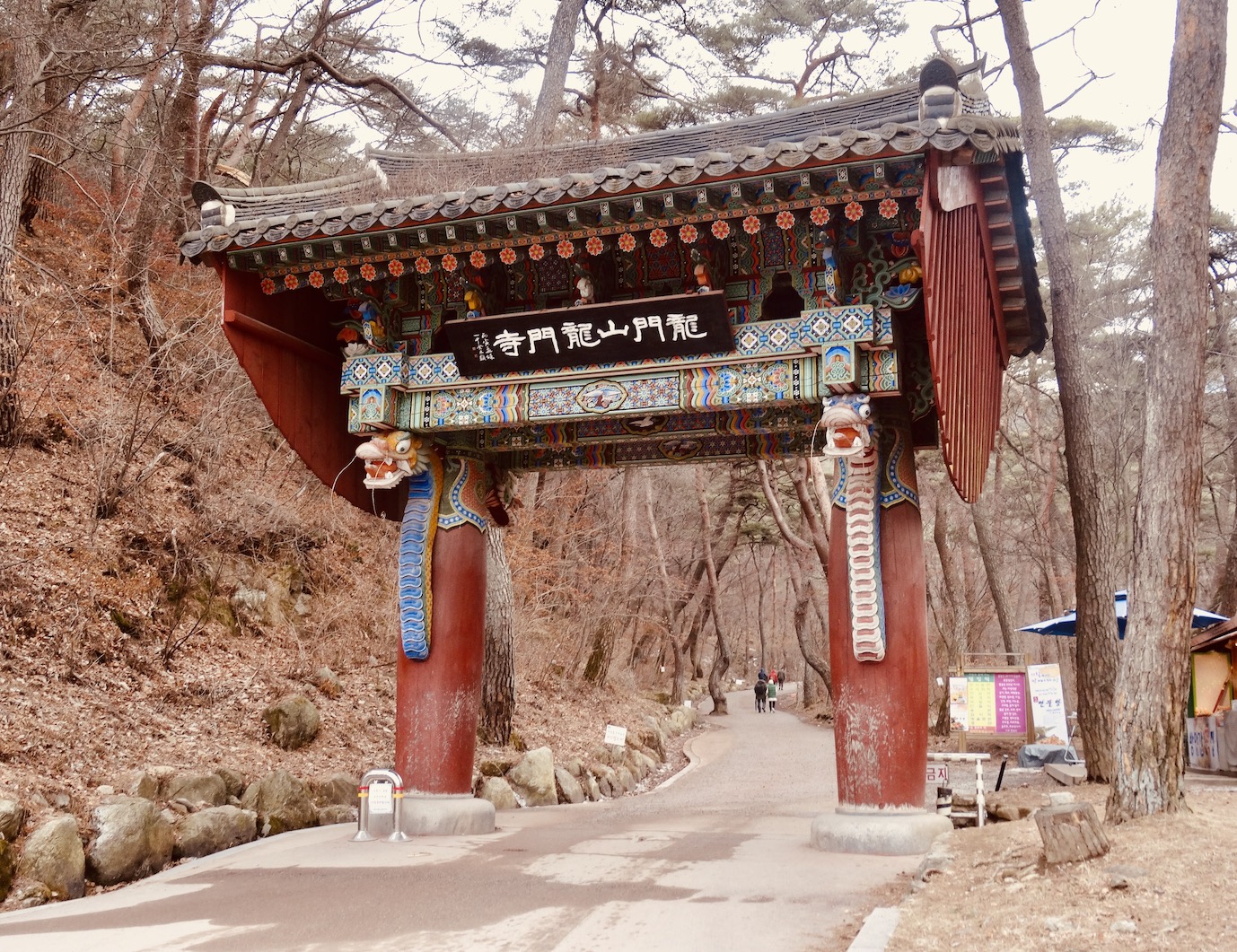 The start of the trail leading to the temple.

At some point I dozed off, thus I felt thoroughly bemused when River woke me with a gentle prod. “Time for a hike!” he smirked. We were in a large car park, which led to a gently sloping forest trail. Gingerly rising to my feet, I knew that I had to man up, blow away my internal cobwebs and make an effort to appreciate this wonderful opportunity. 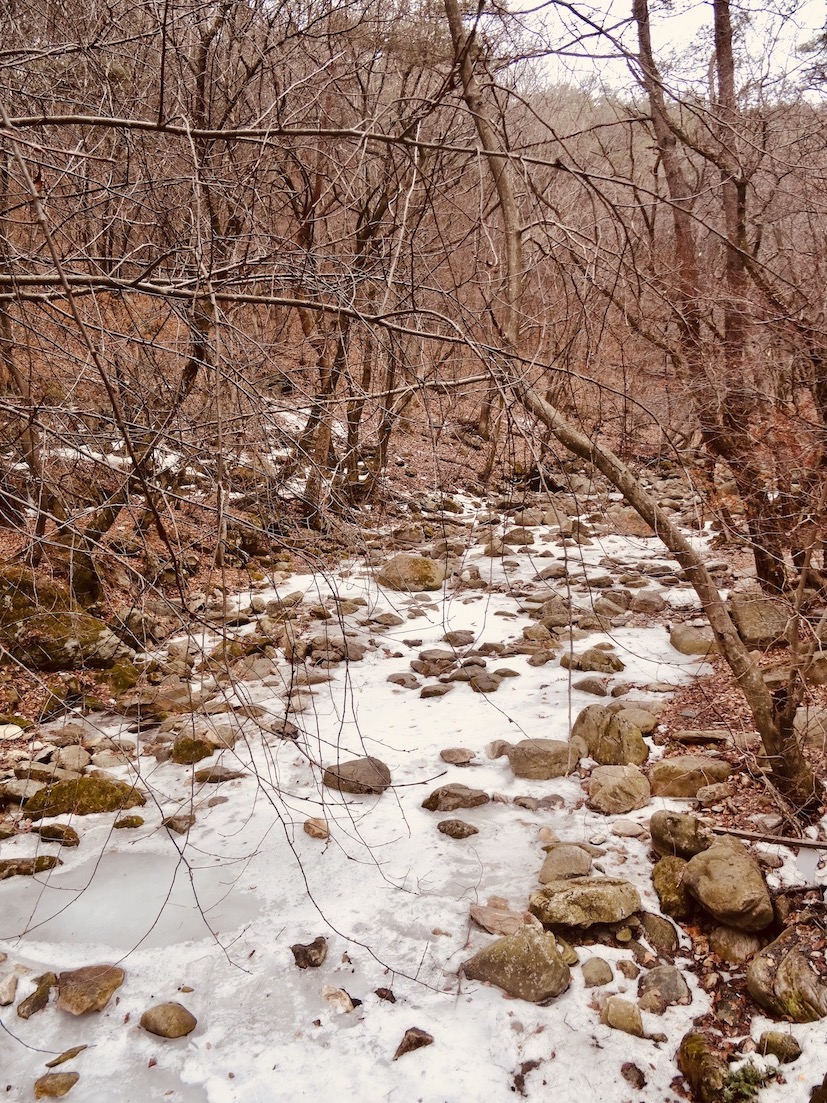 A wintry morning in South Korea.

It was a perfectly wintry morning as we made our way up the trail towards the temple. There was a biting chill in the air as we took in the landscape of skeletal trees, scattered rocks and frozen streams. As we went, River told me this was one of his favourite places to come and get away from it all. A quiet, picturesque retreat far from the seemingly constant noise of Seoul. 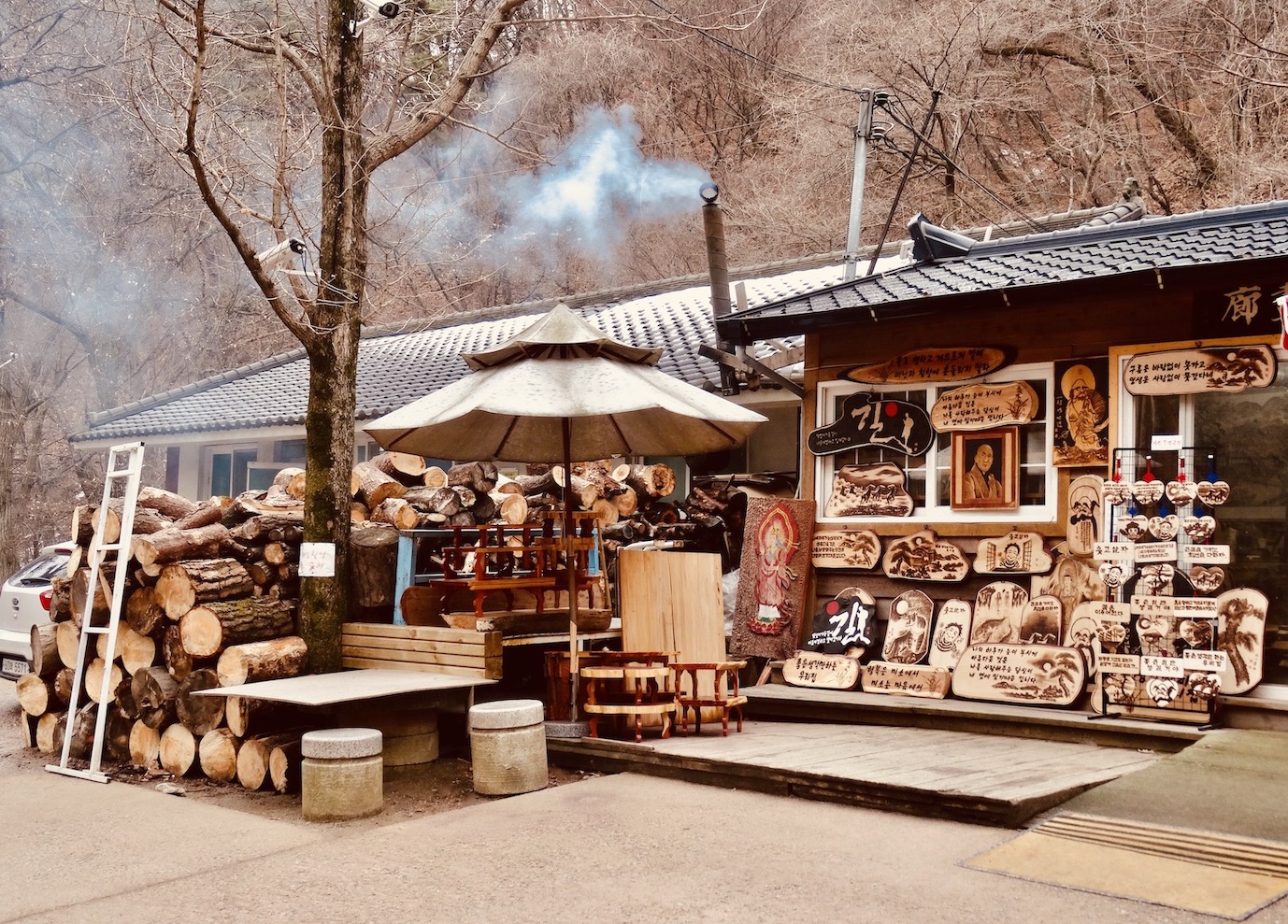 About halfway up we came across a wood workshop of some repute. So well known, River said, that people often travelled across the country to see its creations. I’d only known River for a few hours and yet no subject was out of bounds. We talked of our youths and our travels. I told him about my recent divorce and he confided in me that he’d been battling cancer for several years. Somehow, the whole experience felt positively healing as we closed in on the temple grounds. 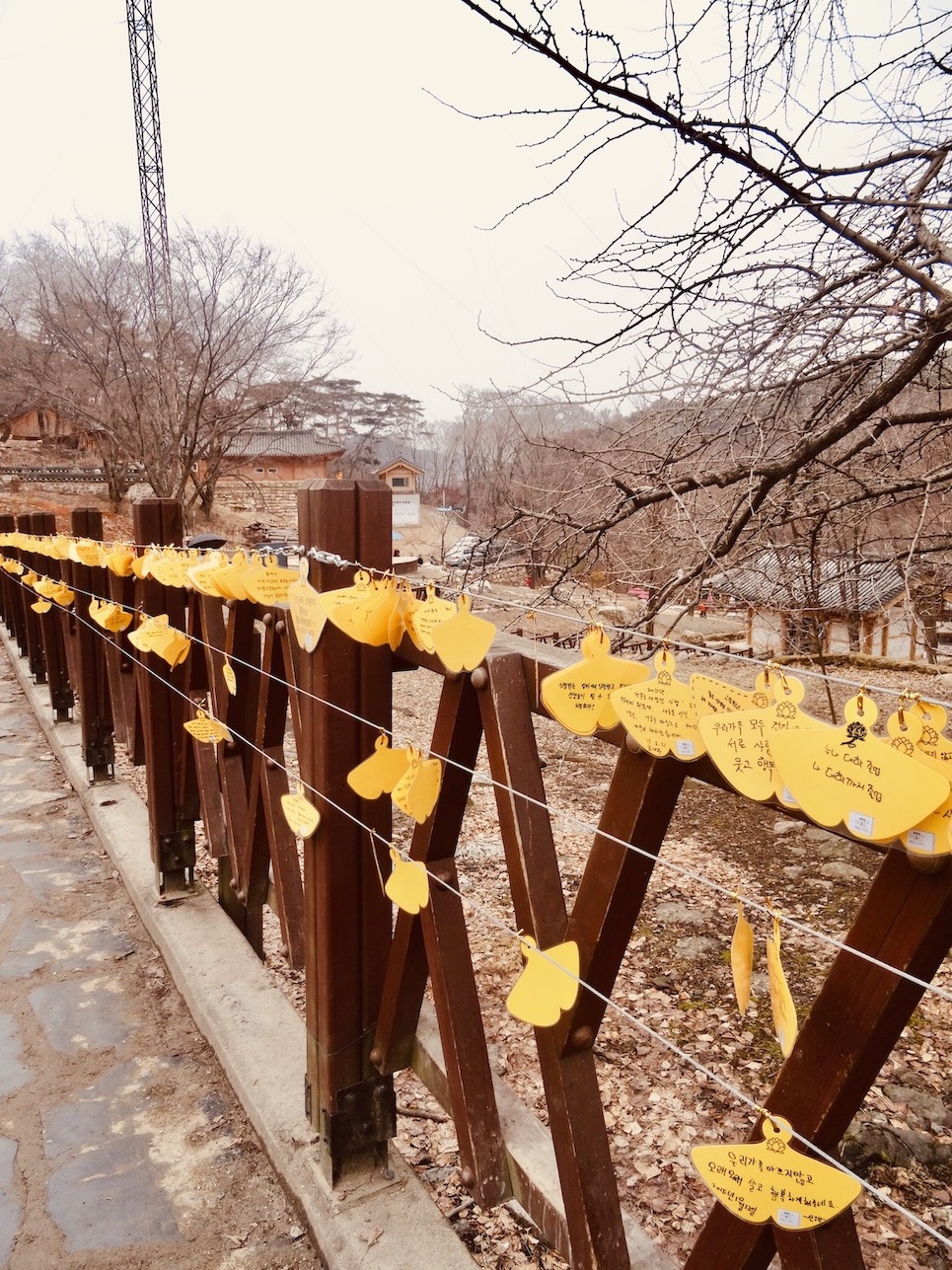 Entering the compound, we followed a stone path lined with a fence of handwritten wishes. “It’s traditional to leave a wish here” River explained. Visitors can pick up a yellow card at the temple and scribble down their wish. It then gets laminated to protect it from the elements before you pick out a spot on the fence. I asked River if he’d left one here, but he only smiled in reply.

“Dear husband, I wish you good health. And I wish you would stop arguing with your kids”. 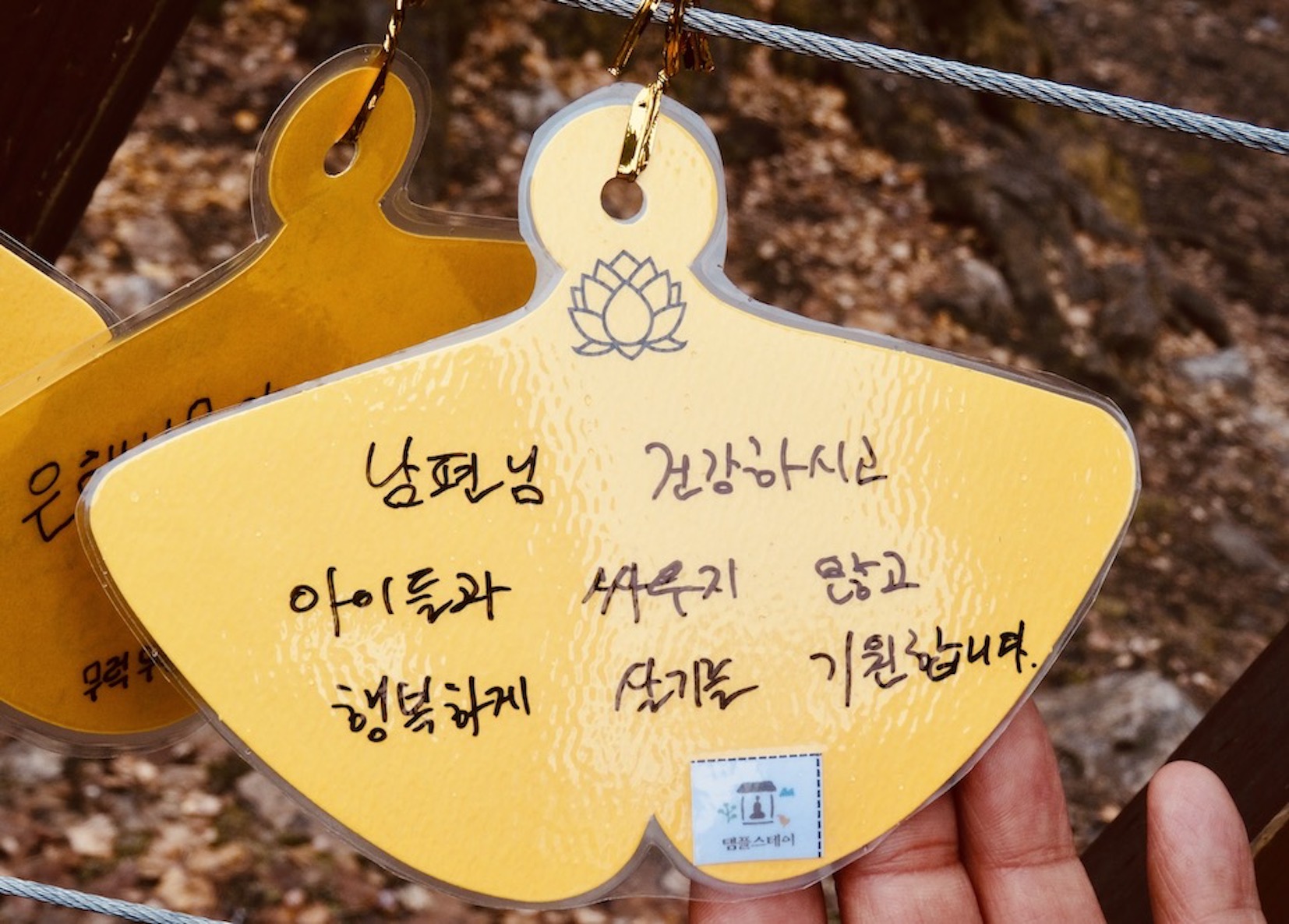 Yongmunsa Temple’s history is somewhat muddled. In fact, there are all kinds of theories about how far it dates back and who was responsible for its creation. Many sources state that a monk by the name of Daegyeong built the place in 913. Another legend claims the Korean Crown Prince Mauri established the temple around 930.

More reliable records spring up during The Joseon Dynasty. In 1447 Prince Suyang ordered a grand reconstruction of the main hall in honour of his mother, Queen Consort Soheon. 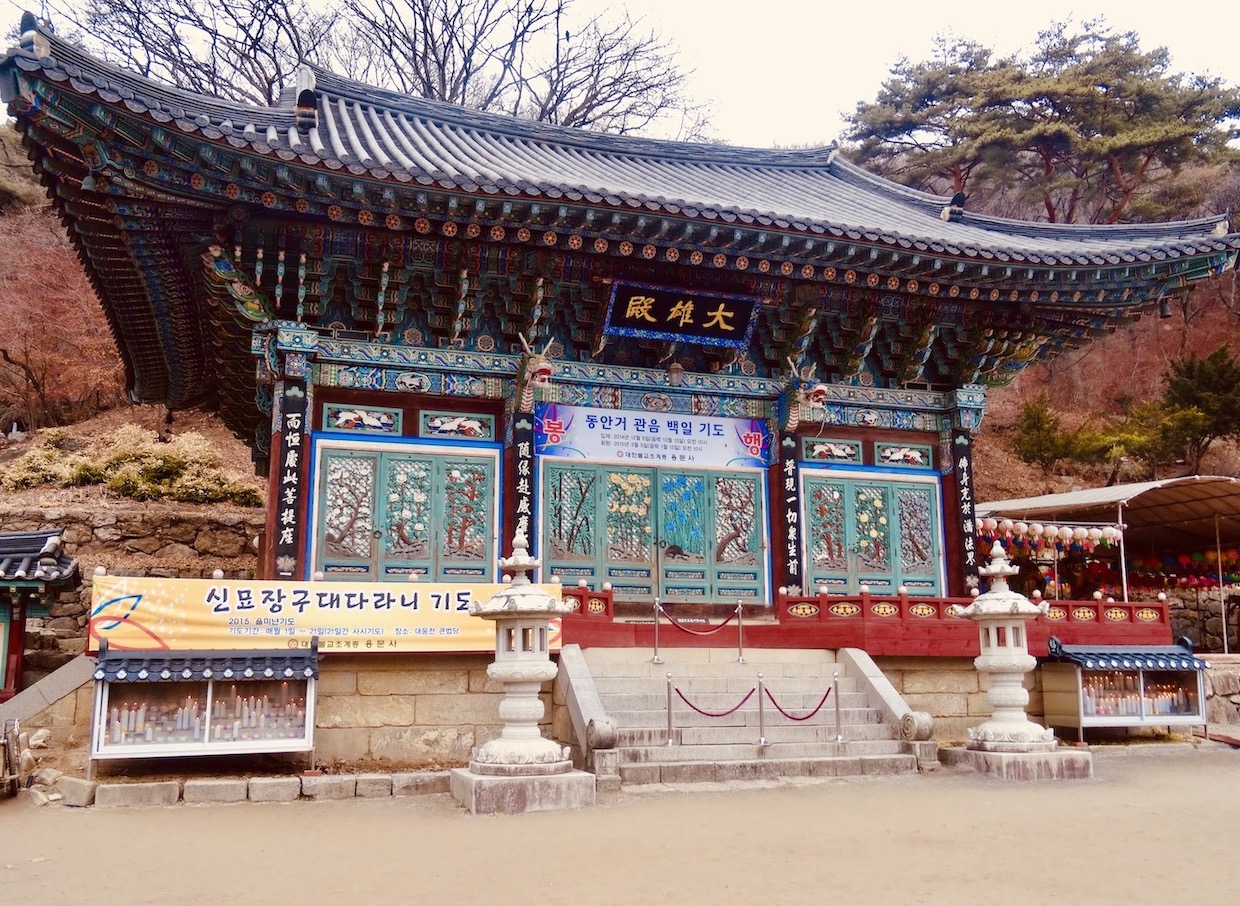 Sadly, The Imperial Japanese Army burnt down most of the temple in 1907. This was due to the fact that the main hall had been used as a hideout for Korean militias. Nevertheless, the temple buildings were all rebuilt a few years later in 1909. 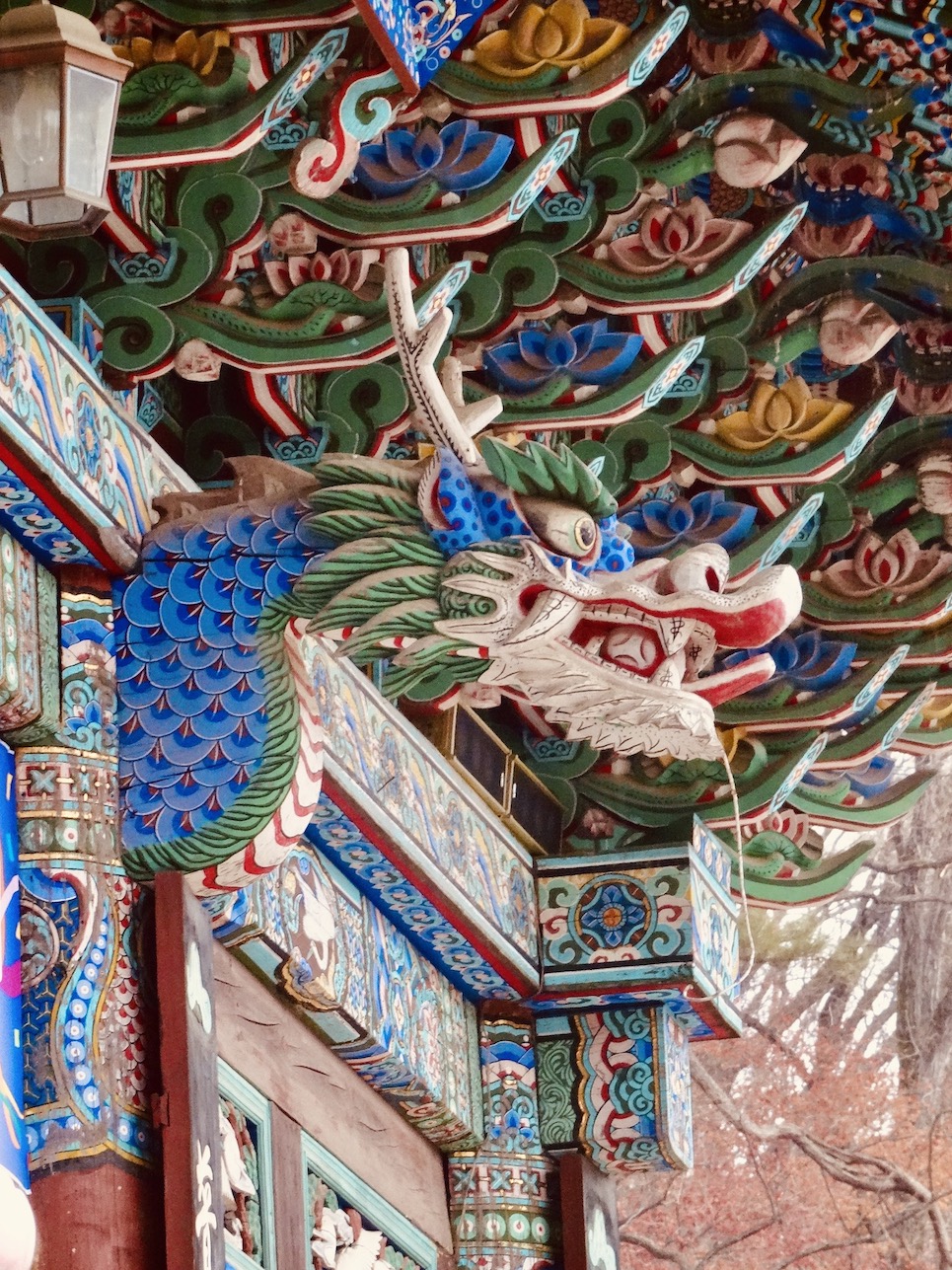 The exterior is gorgeous, with loads of beautiful carvings and sculpted details. Taking me on a full circuit, River pointed out multicoloured flowers, bald-headed baby Buddhas, glaring hawks and a number of sneering dragons. The dragon motif is dominant, which is no surprise when you learn that in Korean Yongmunsa means Dragon’s Gate. 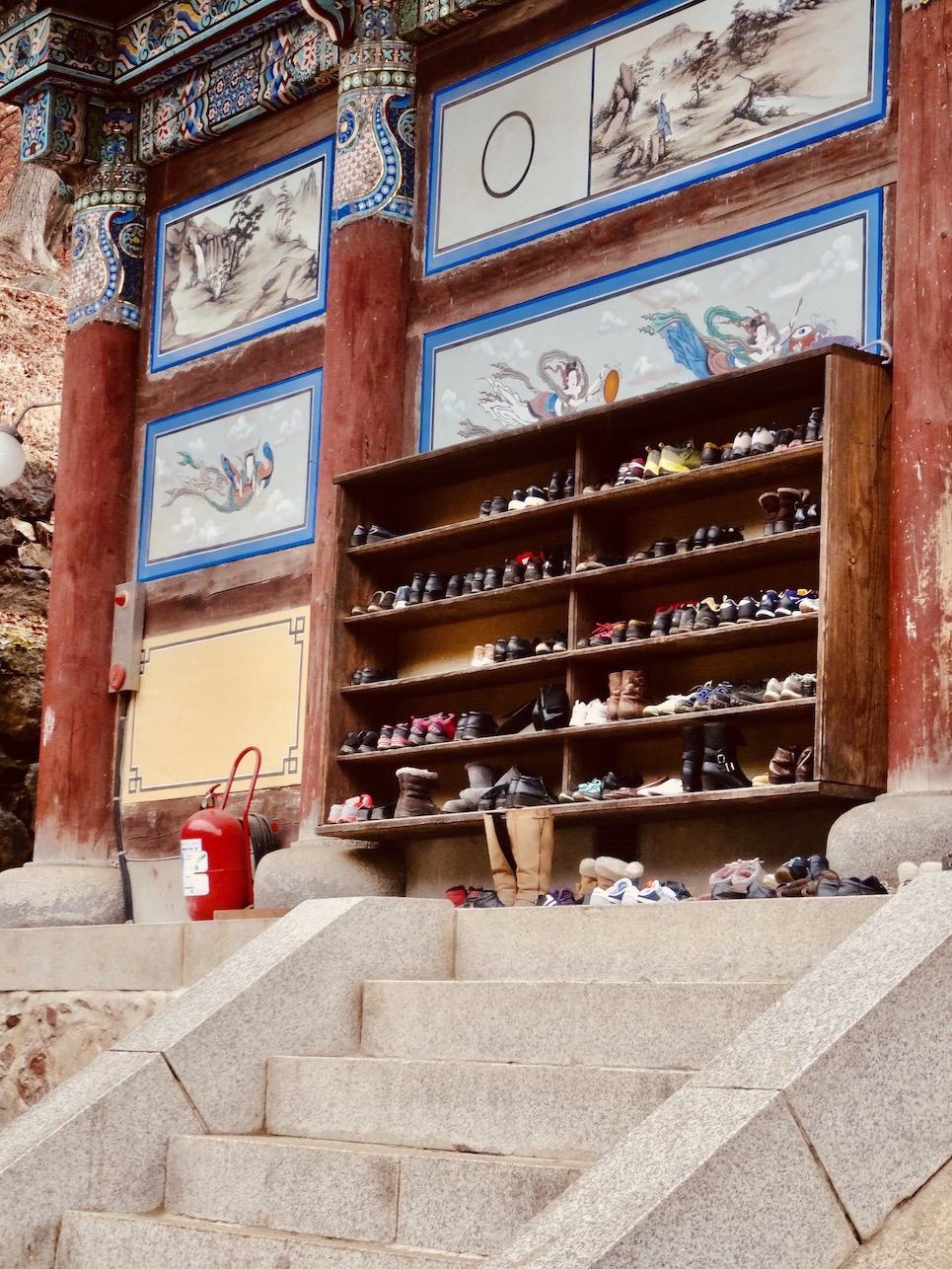 While exploring the exterior, my ears pricked up at the sound of chanting inside. Curious, I made my way to the entrance steps, with its rows of shoe-filled shelves and wonky fire extinguisher. Through the open door, I could see the interior was packed with people. “Do you think I can go in?” I asked River. “Sure” he replied, “just keep to the back wall”. 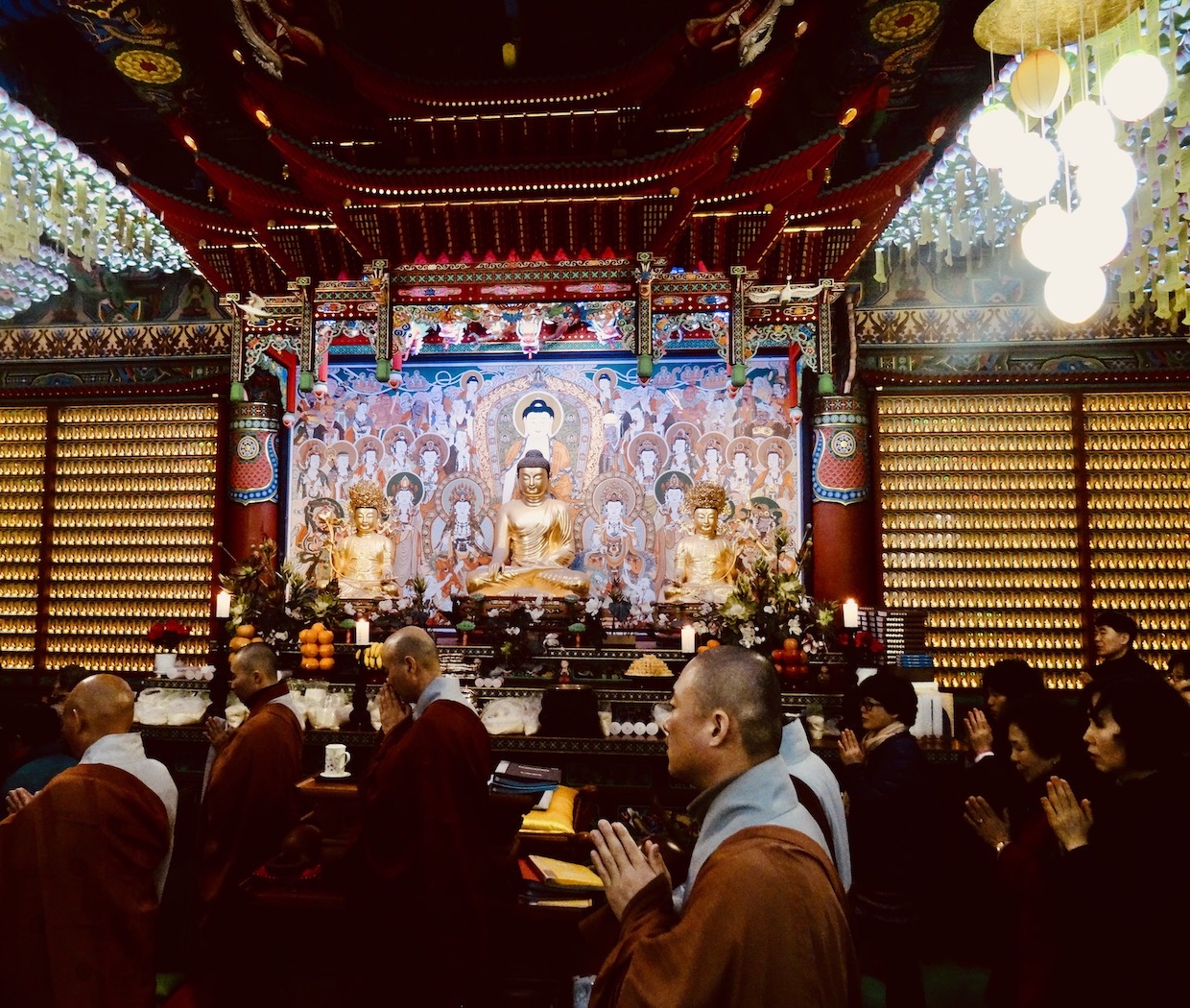 It was a magical experience watching the Buddhist ceremony, even if I felt like an intruder. Backing myself into a discreet corner, I listened to the chanting of the monks and watched the locals as they prayed before an elaborate altar of golden Buddhas. overflowing fruit bowls and vases of fresh flowers. 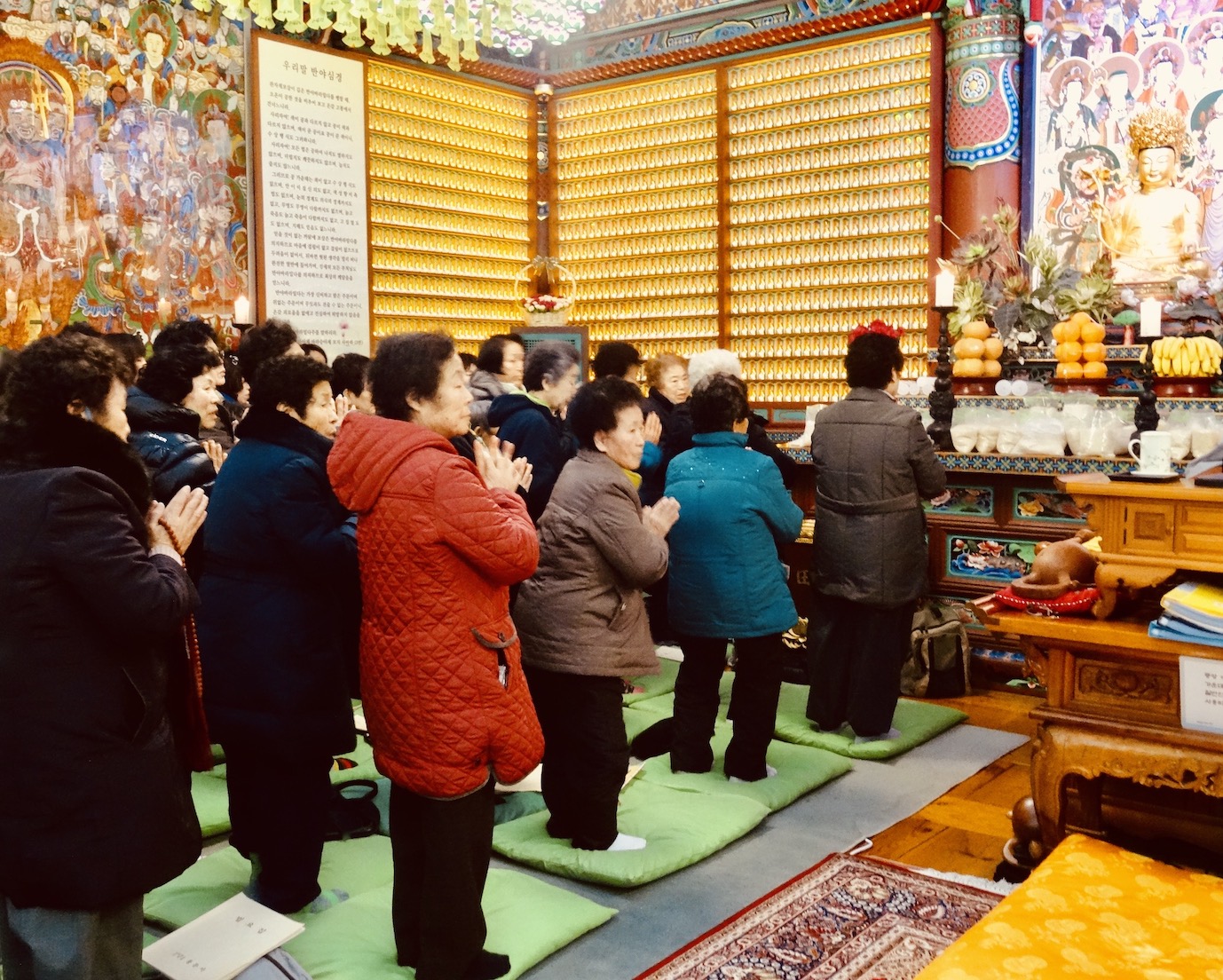 Back outside it was raining. But River had come prepared, unfurling a large, green umbrella before handing me one of my own. “Hey, let me show you one of Korea’s most famous trees”. 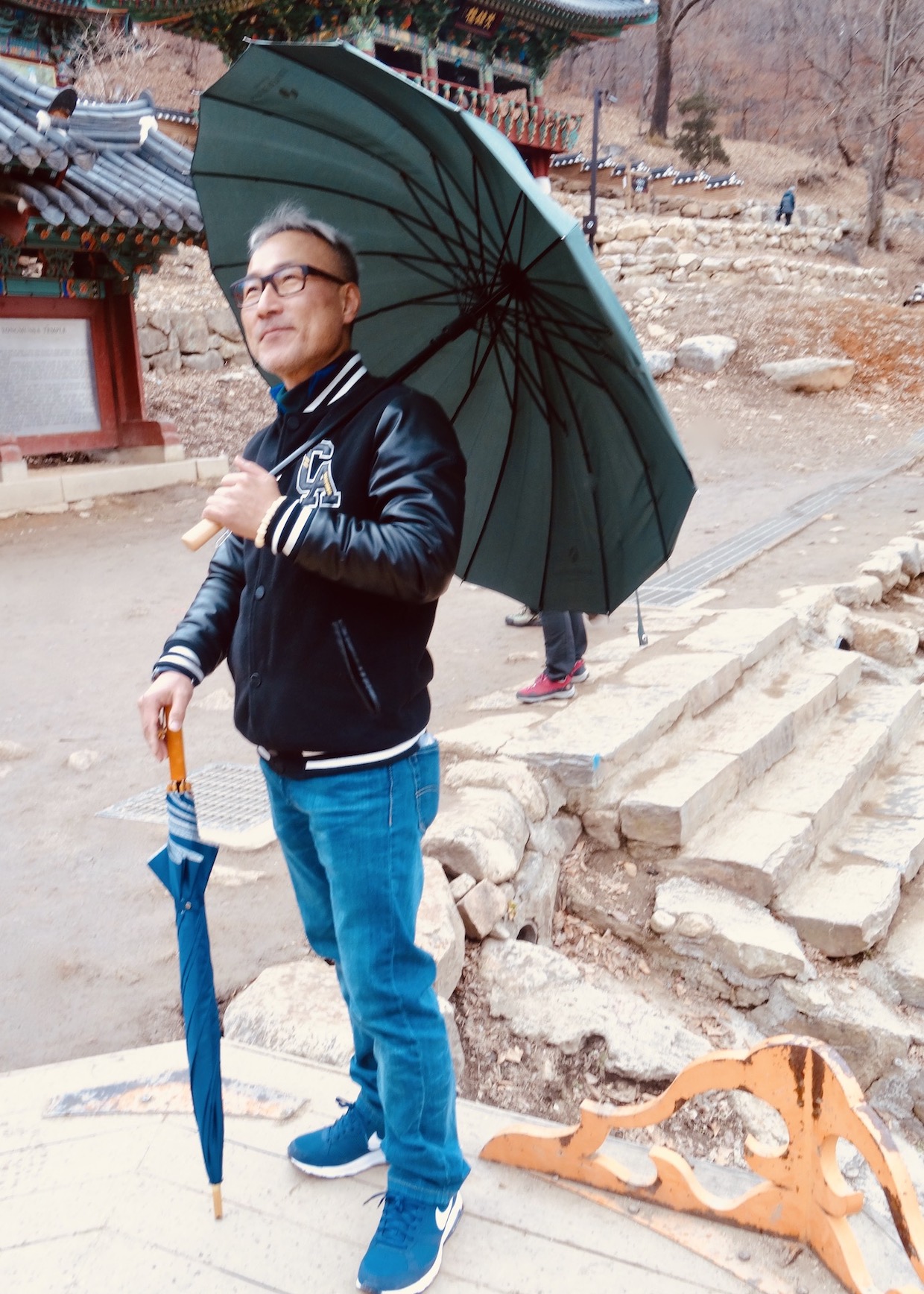 The Yongmunsa Gingko Tree is, according to some, the largest such tree in Asia. It’s over a thousand years old and still produces something like a hundred large bags of Gingko nuts ever year. One fun legend claims the great Silla Dynasty monk Uisang created the tree by smashing his wooden staff into the ground outside the temple. 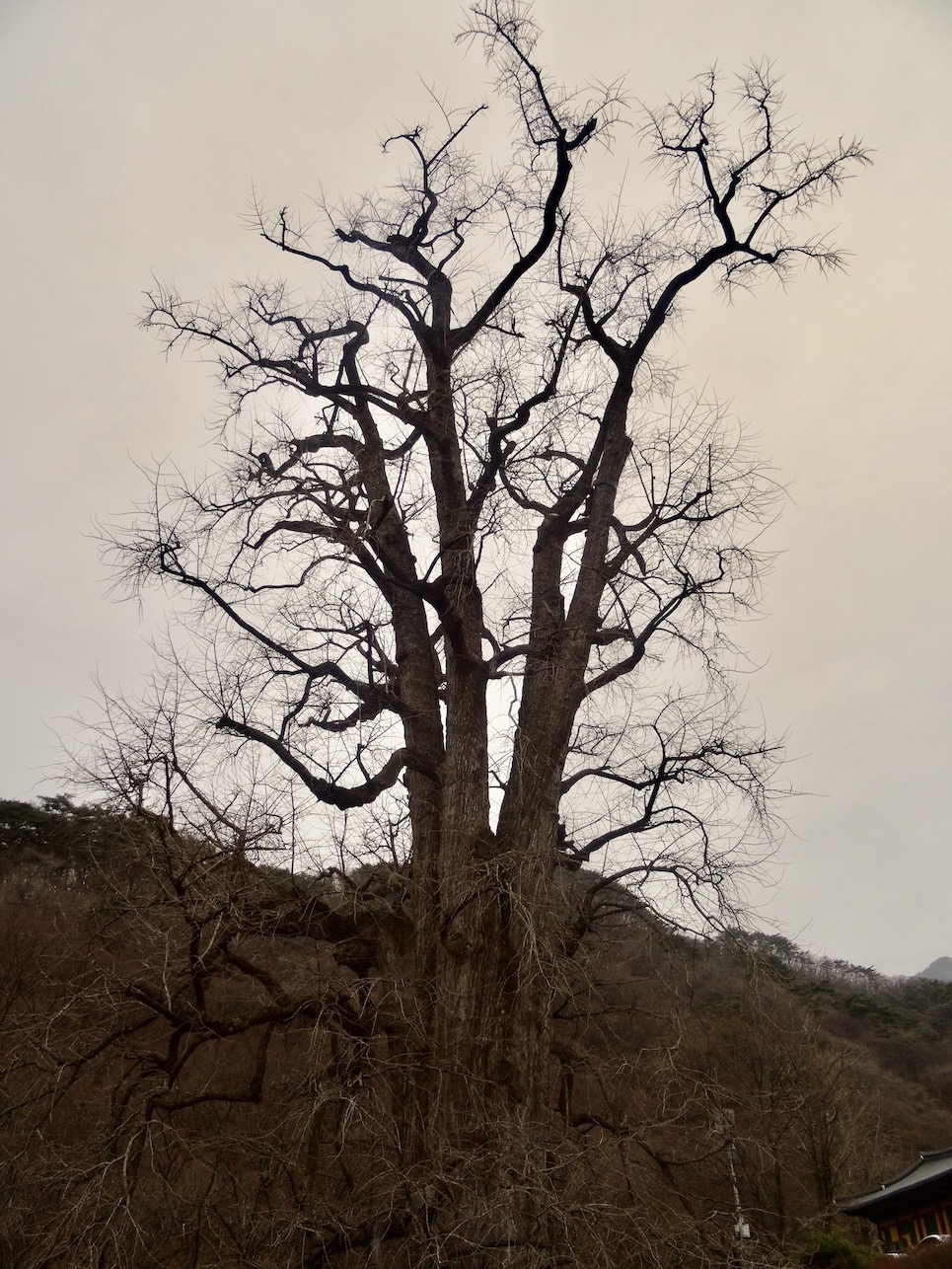 I’ve seen some lovely summer photos of the tree, in full bloom. That day, it was a giant, towering sinister beast of a thing framed by the dark, grey sky. “NO MORE DRINKING!!!” it seemed to order me.

In addition to the main building, Yongmunsa Temple features a number of smaller halls and a few impeccably kept shrines. One of these rooms houses an odd collection of cartoonish Buddha figurines. A few of which are, in all honesty, pretty gruesome. There are literally hundreds of them, surrounded by flickering candles and fruit donations. 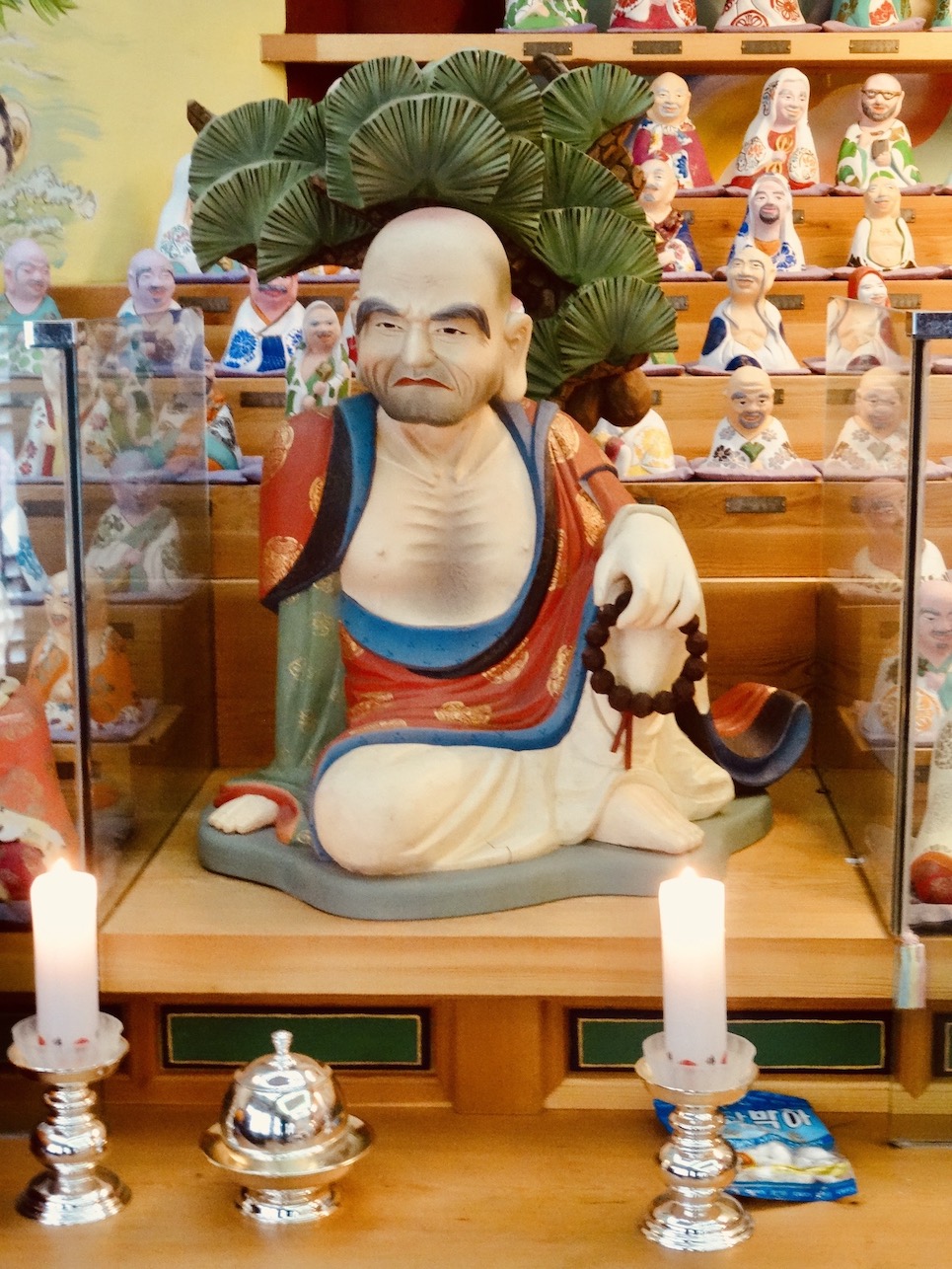 The rain was pounding down at that point. We tried to wait it out for a while inside the weird Buddha Hall, but the weather just wasn’t playing ball. Conceding defeat, River suggested we head back to the car and decamp for lunch nearby. 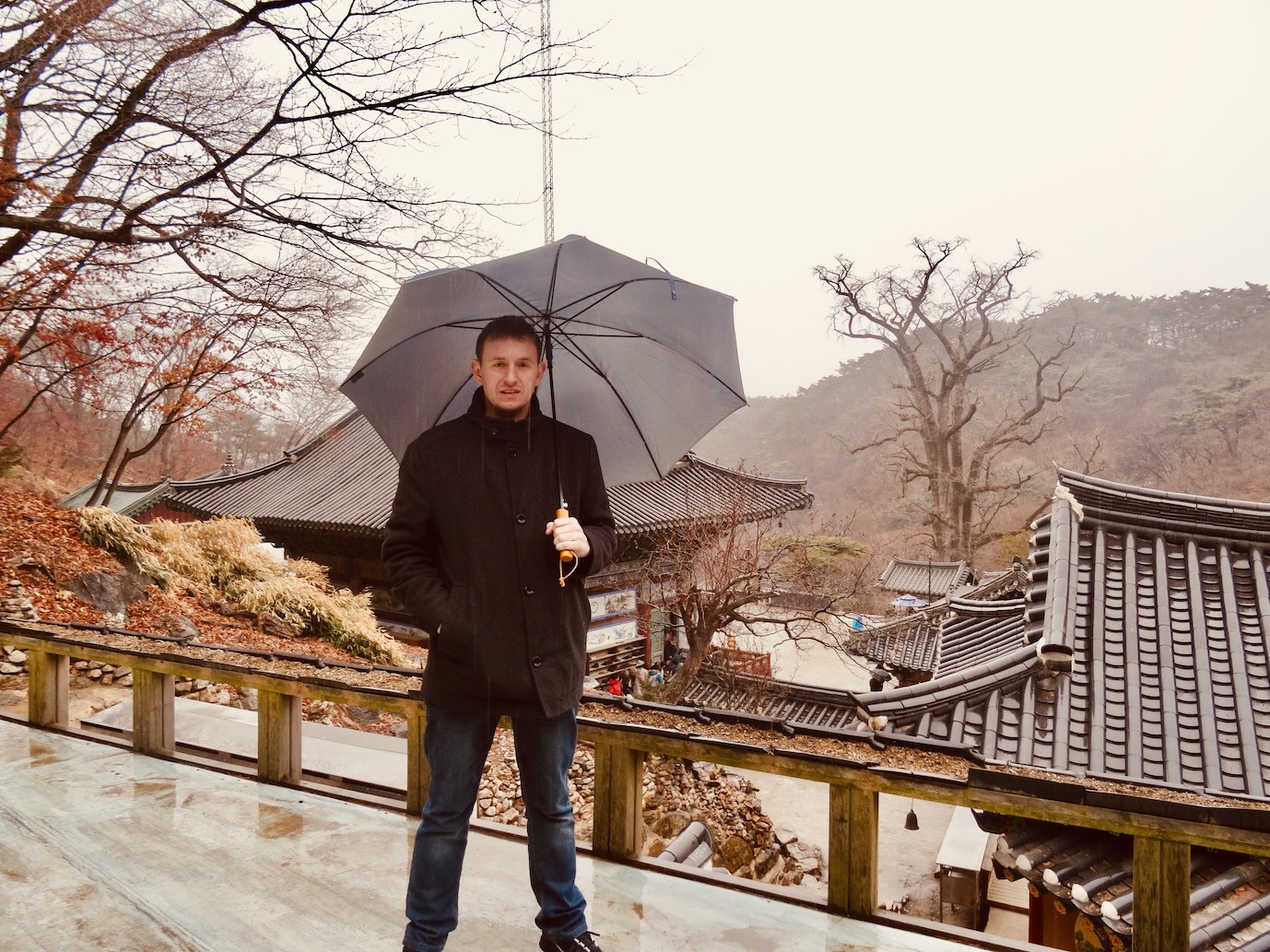 I’ll always be grateful to River for taking me Yongmunsa Temple that day. It was one of those amazing travel experiences where someone goes above and beyond in welcoming you to their country. So cheers River, for being my tour guide and taking me for lunch. Sorry I threw up by the side of the road on the way back to Seoul. #awkward

Like this? Why not read more of my reports from all around South Korea.