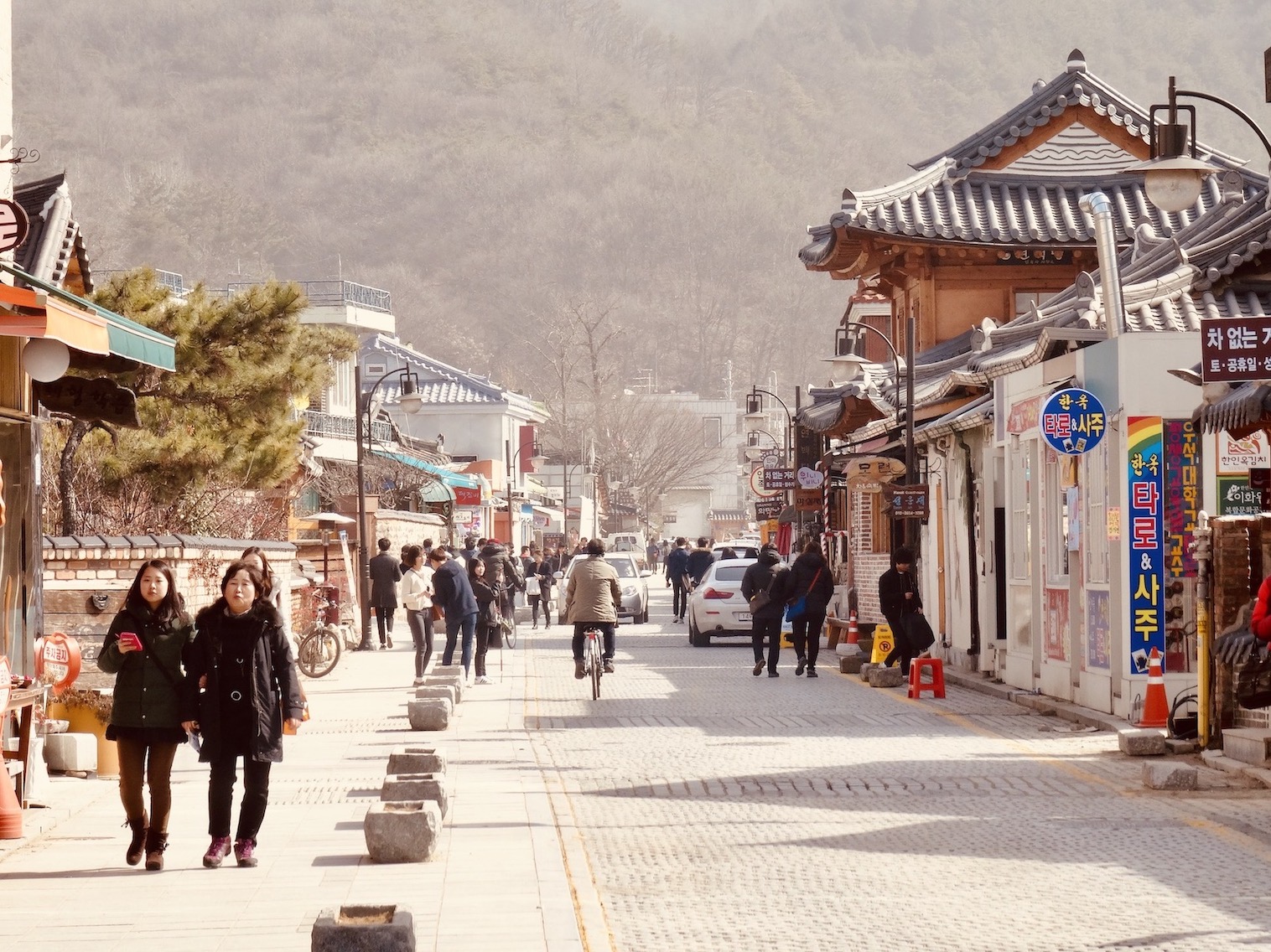 February 2015. I was really just looking for a place to break up my journey from Seoul to Busan. Not that the trip would have taken all that long on the bullet train. Rather, it was an excuse to squeeze in a few nights somewhere and add another location to my travels in South Korea. At the last minute, I plumped for the city of Jeonju, capital of Jeollabuk-do province. Doing a quick scan online, I found myself reeled in by the promise of a sleepy backwater home to the country’s largest and most impressive cluster of traditional Joseon Dynasty houses. After a relentless week exploring in Seoul, I figured Jeonju would provide me with a much needed deep breath. 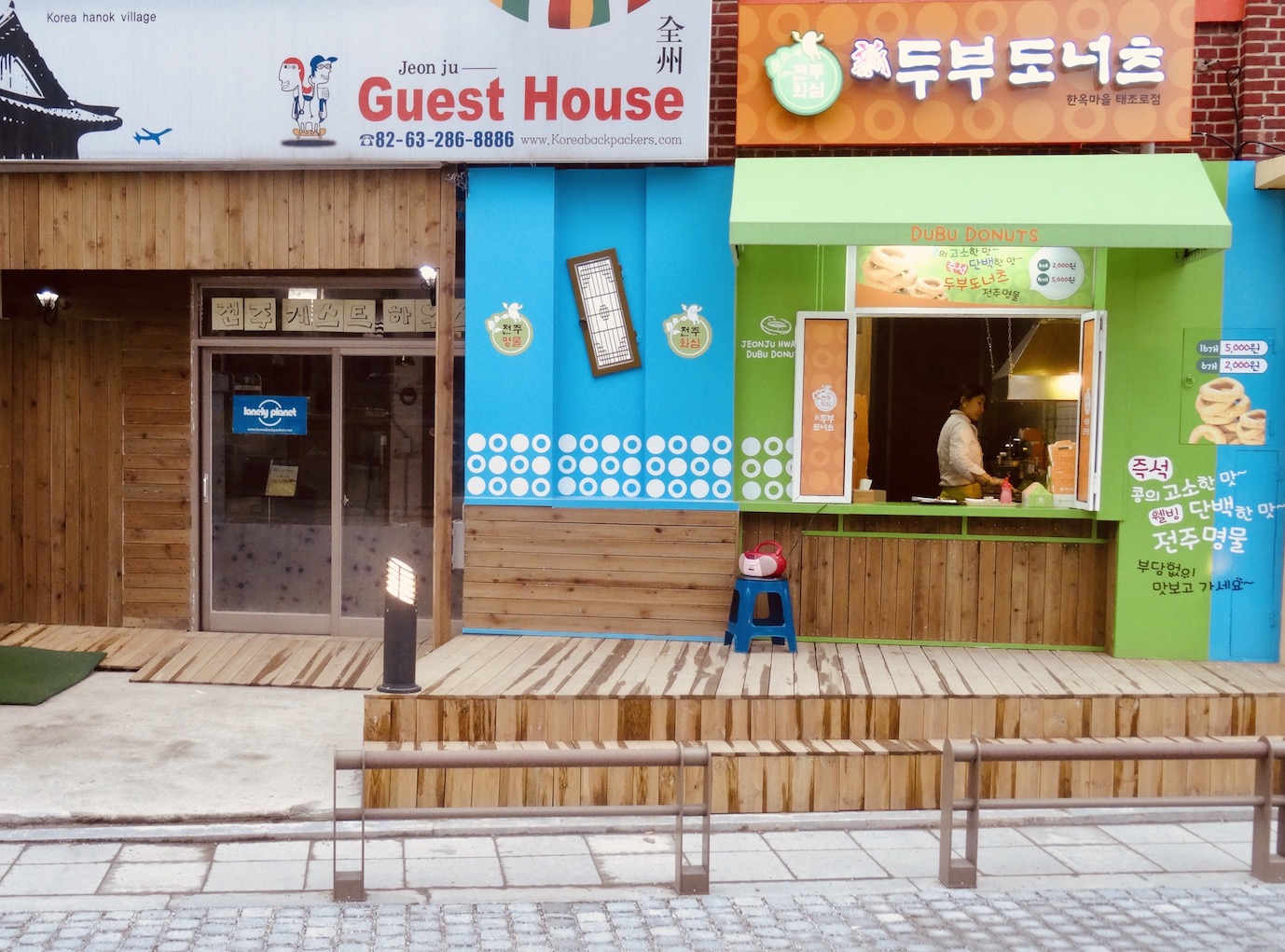 Jeonju’s drowsy vibe was obvious from the get go. In fact, the streets were eerily quiet as I made my way on foot from the bus station to Jeonju Guesthouse. I’d been secretly hoping the hostel would be super chilled, but totally unprepared for the emptiness that met me. After checking in, the receptionist led me to a six-bed dorm. “This is all for you!” she laughed. “Unless somebody else comes”. Nobody did. 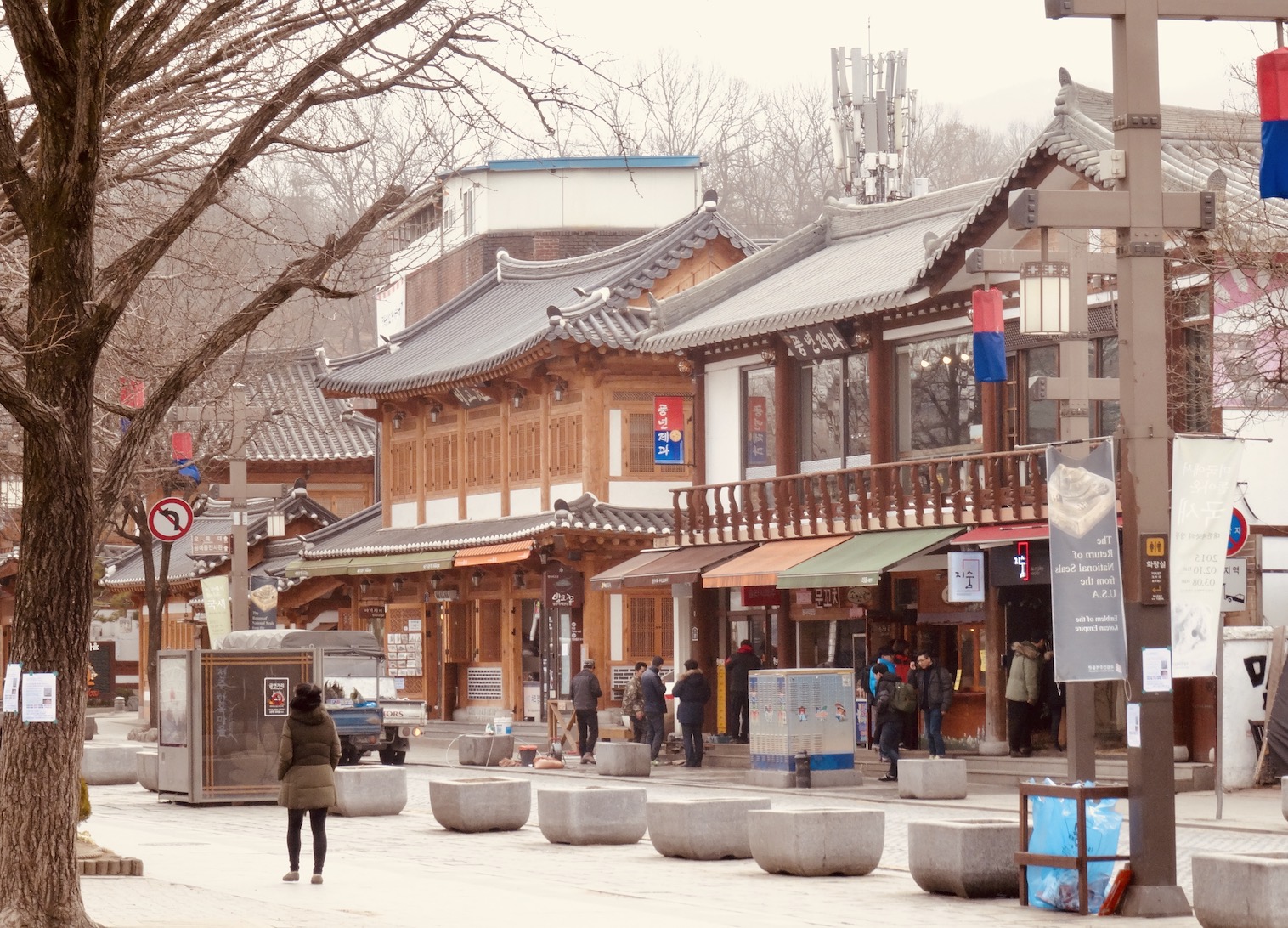 Happy to let my Jeonju experience unfold organically, I slept in the next morning and didn’t actually leave the hostel until midday. Out in the crisp February air, I decided to kick off my visit with the city’s premier attraction, Jeonju Hanok Village.

The Hanok is a traditional Korean building made of wood, rock and soil. Beautifully designed with timber frames and curved roofs, they follow the principles of Feng Shui. These gorgeous buildings date back to the fourteenth century. And where better to see the country’s best collection than Jeonju, the birthplace of The Joseon Dynasty. 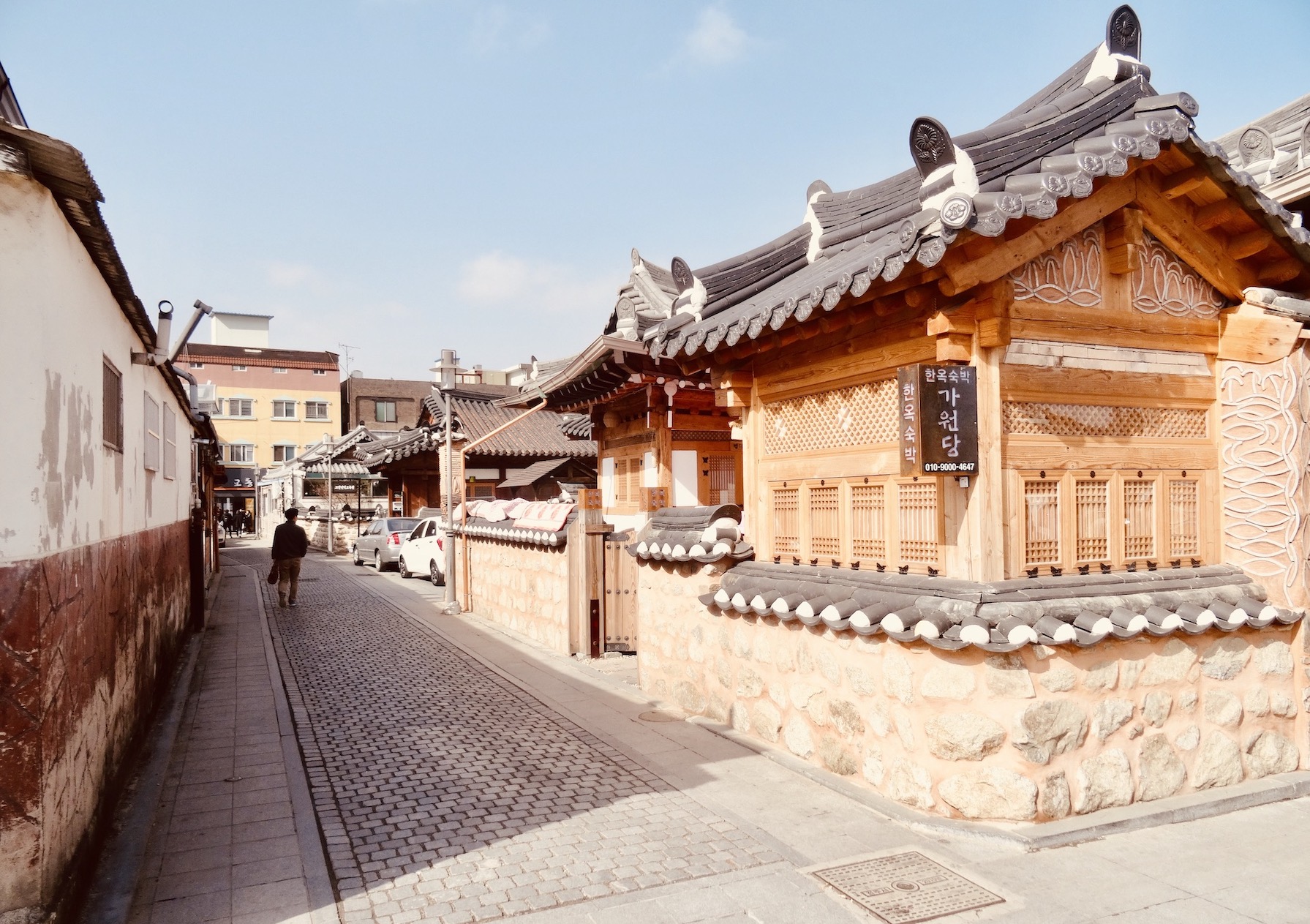 Jeonju Hanok Village has over seven hundred wonderfully restored hanoks. Many of these buildings now serve as guesthouses, restaurants, cafes and gift shops. When Koreans want to take a break from their busy working lives, many flock to Jeonju for a day or two of hanok lazing. They were so damn pretty, I immediately regretted my decision to book the hostel. 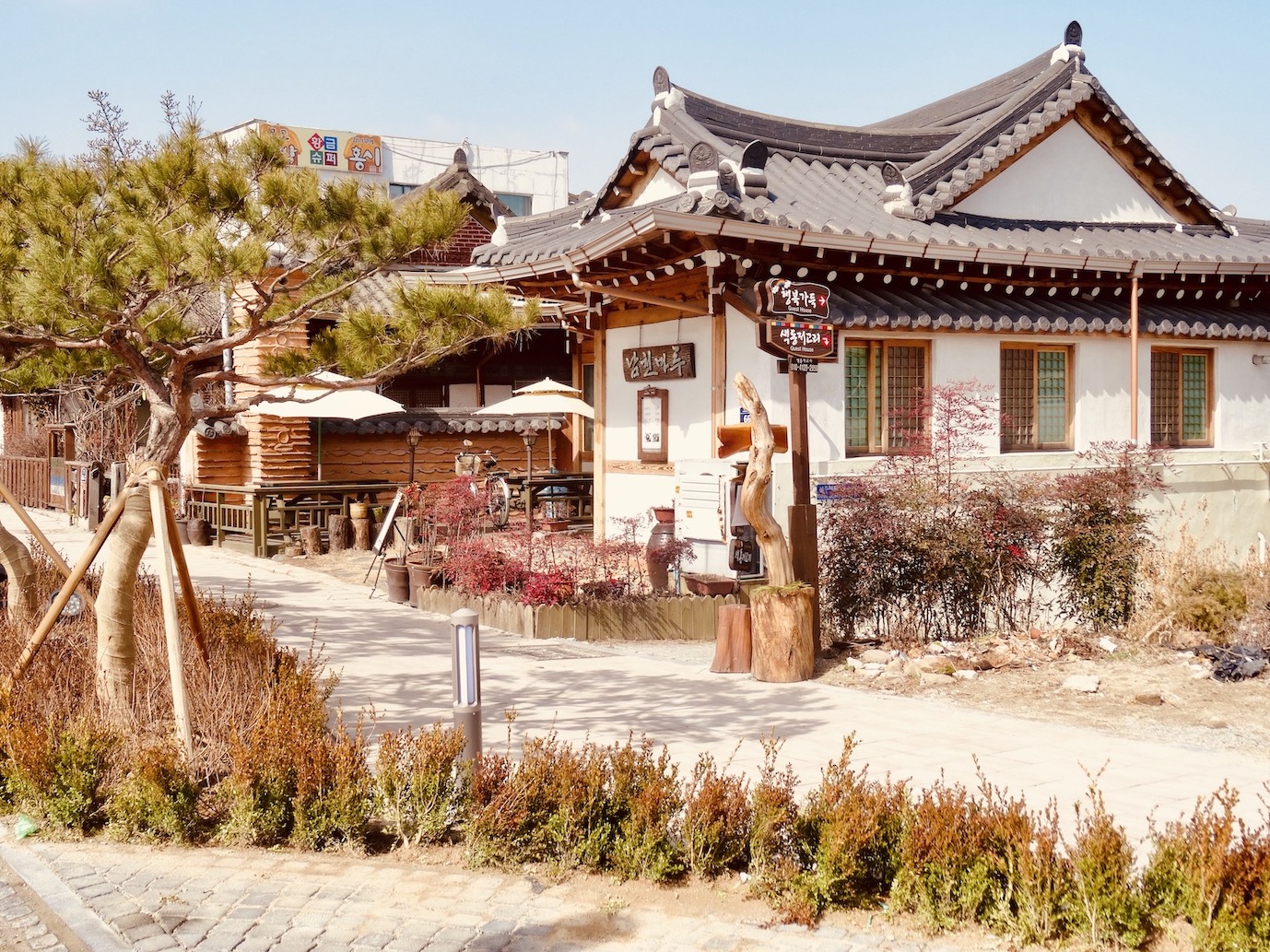 A Hanok Guesthouse in Jeonju.

Make no mistake though, a hanok homestay doesn’t come cheap. Moreover, there’s often an English language issue, so unless you’re well connected you’d almost certainly be better off choosing from the somewhat limited options on Airbnb. Here’s a well-reviewed listing right in the heart of the village. 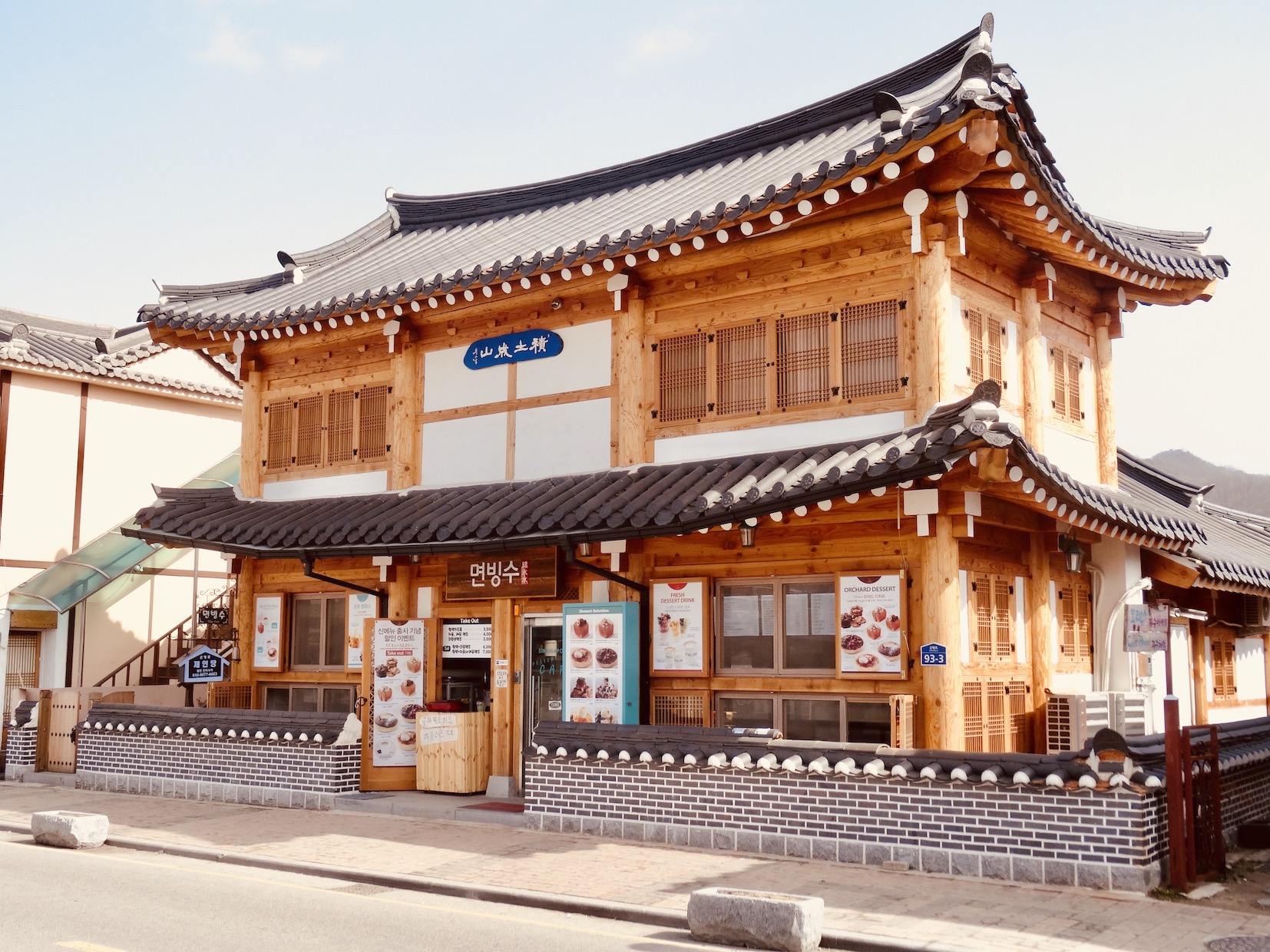 With an acute case of hanok envy, I made do with a stroll around the village admiring the exteriors. It was so picturesque and peaceful that day, just a scattering of foot traffic across the various pedestrianised roads and cobbled lanes. Of course I just had to pop into Orchard Desserts for a coffee. 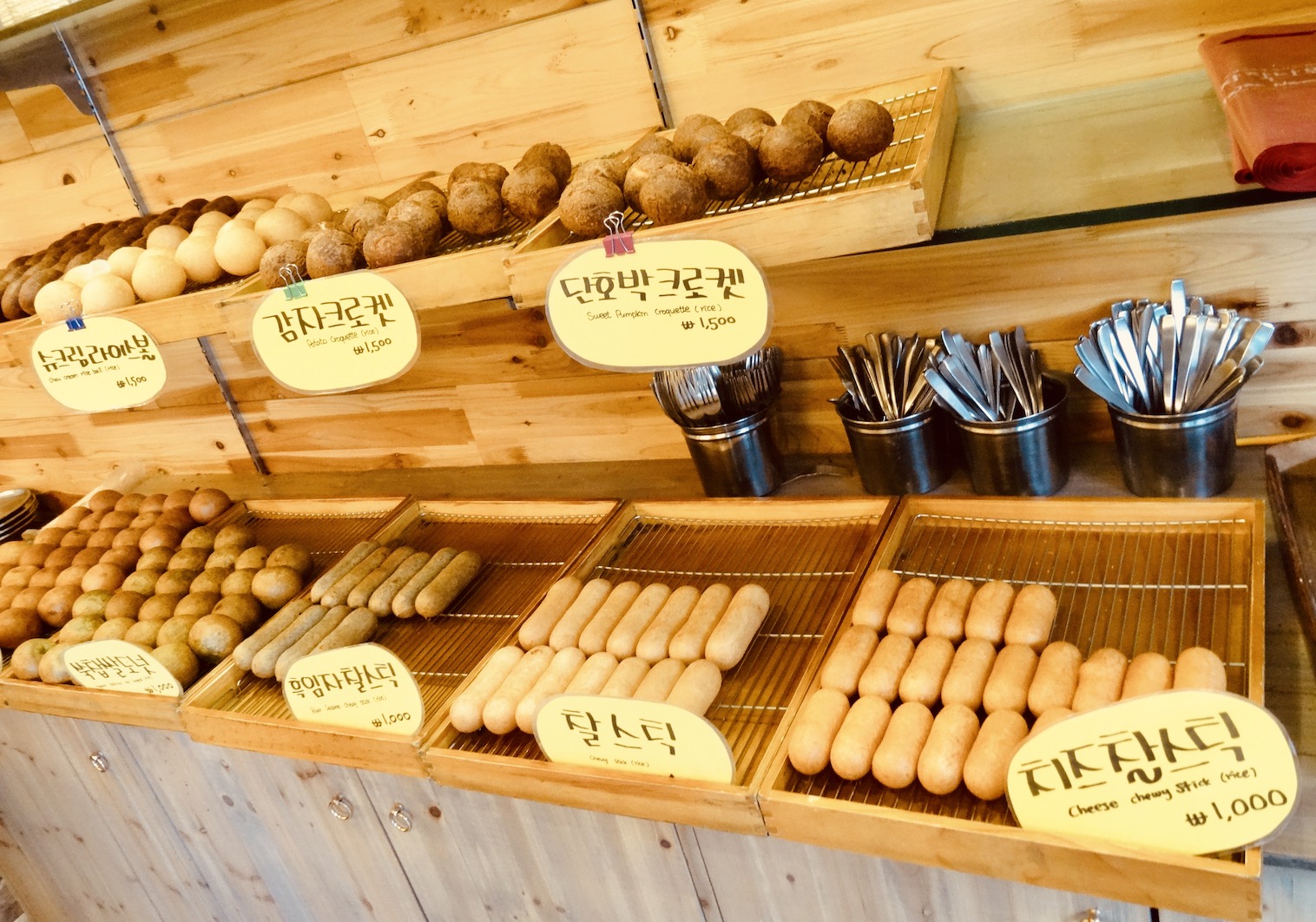 A number of cutesy bakeries pedal traditional Korean snacks. I remember helping myself to a collection of these curious bites. They were all deep-fried dough creations with various fillings, including minced beef, red bean and sweet potato. My favourite was definitely the “chewy cheese”. 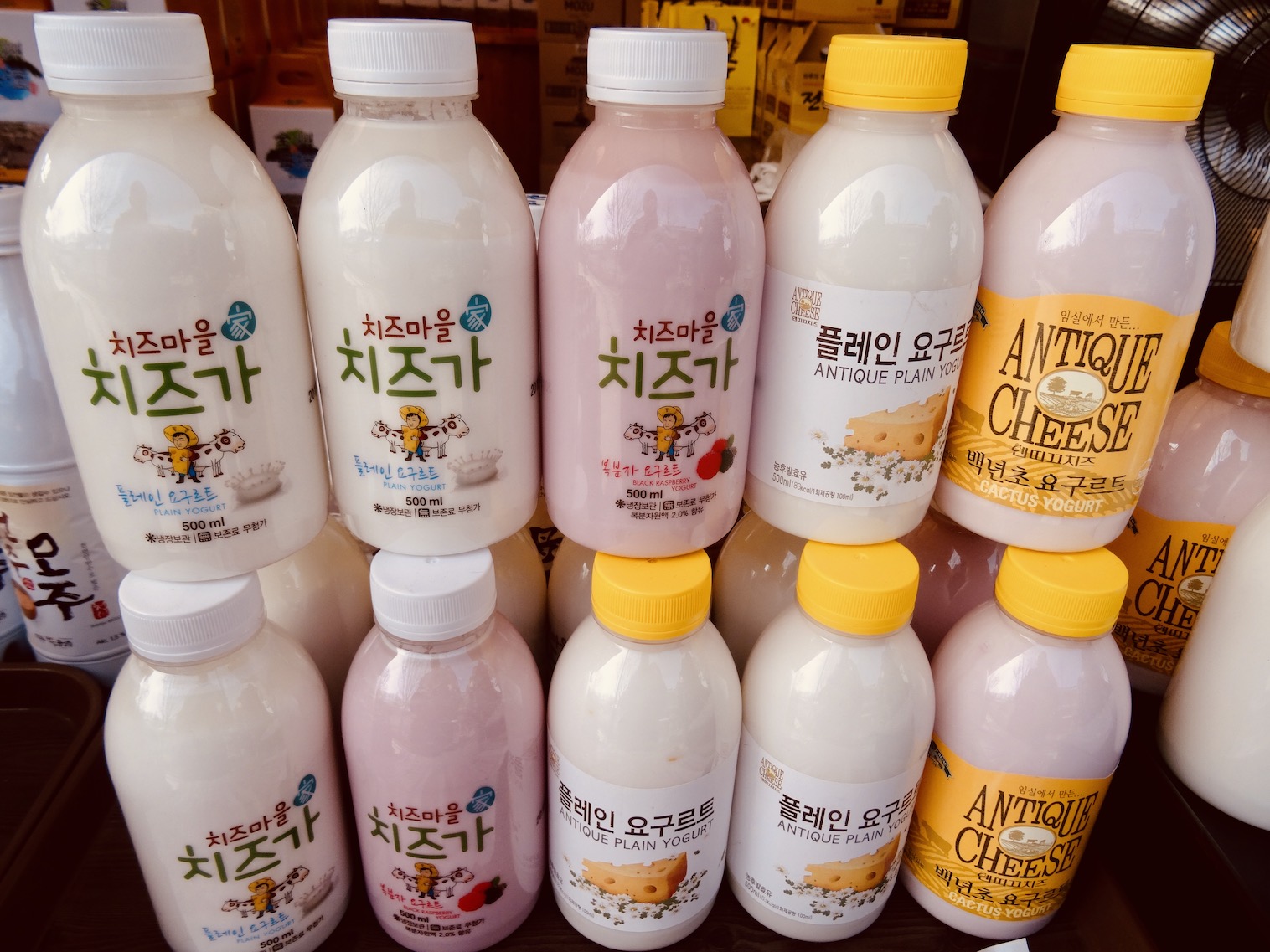 To wash my brunch down, I briefly considered grabbing a bottle of Antique Cheese Cactus Yoghurt. And then I came to my senses and went for another coffee.

Fed and watered, I continued my explorations of the hanok village, which soon brought me to a large store that rents out hanbok, a traditional Korean dress. With its vivid colours and delicate flow of lines and angles, The Hanbok is an icon of Korean life and culture. Up until about a century ago, the dress served as a key part of daily life and remains hugely popular today for events and special occasions. 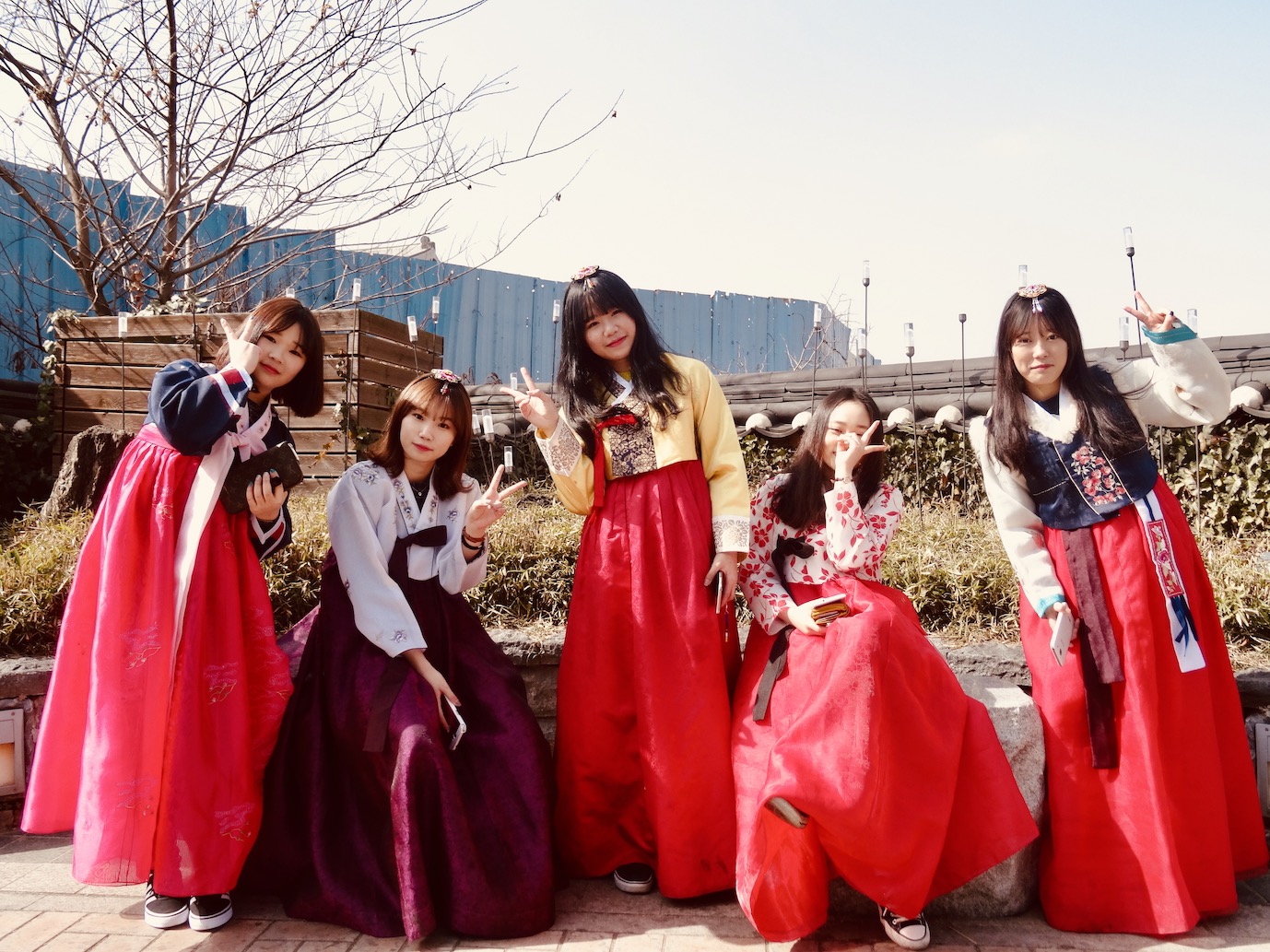 That day, a group of Korean college girls had just rented out hanbok for a school event of some sort. They were posing for a photo outside the rental shop when I asked if I could grab a shot of my own. They readily agreed, but insisted I drop one of them an email with a link to my article when it was done. Sadly, I think I lost the bit of paper with the scribbled email. 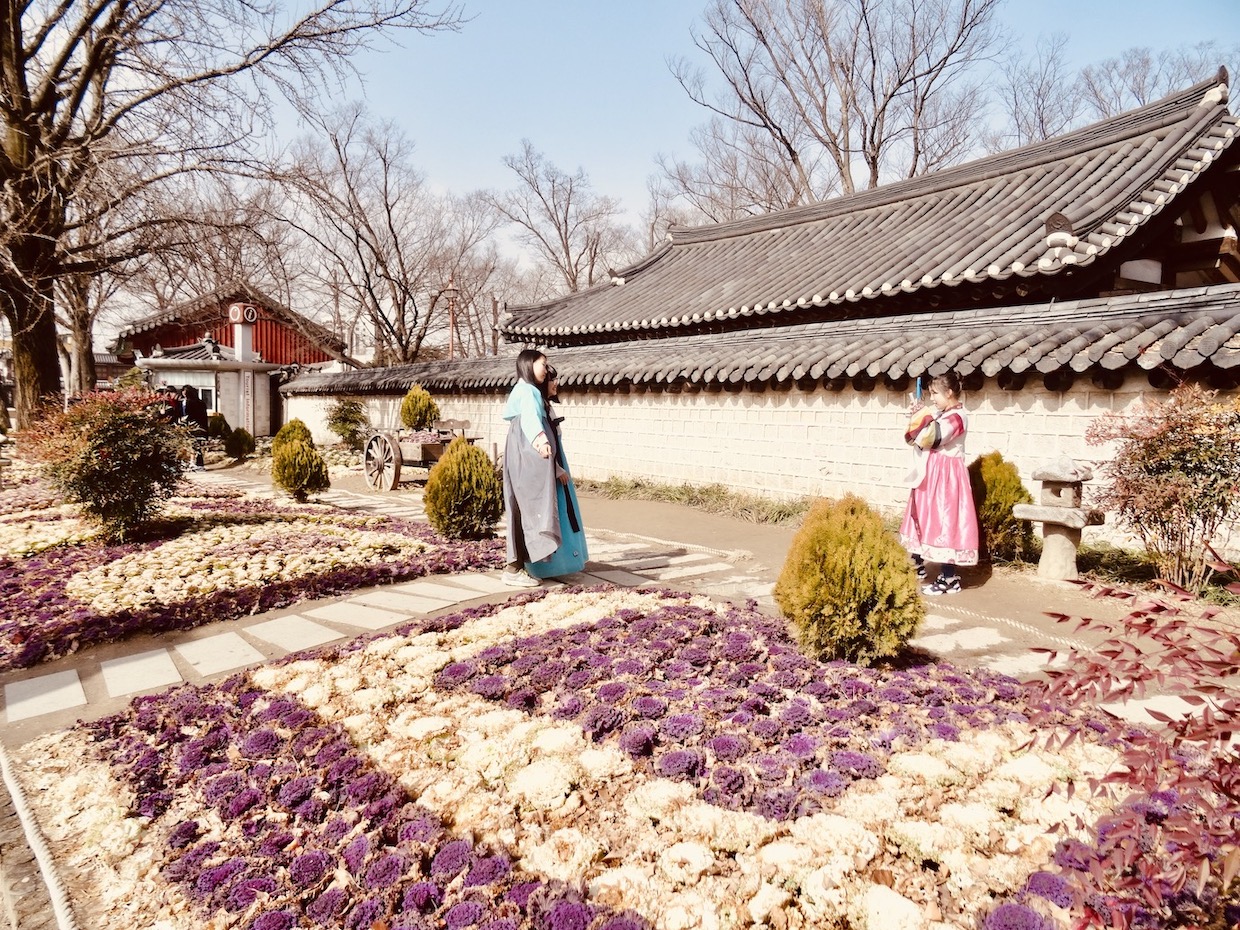 There was more hanbok posing at Gyeonggijeon Shrine, a large compound partly dedicated to King Taejo of Joseon. Built in 1410, it features several original portraits of the king, along with his enshrined mortuary tablet. King Taejo reigned between 1392 and 1398 following his successful campaign to overthrow the Goryeo Dynasty. He died in 1408 at Changdeokgung Palace in Seoul, a decade after his abdication. 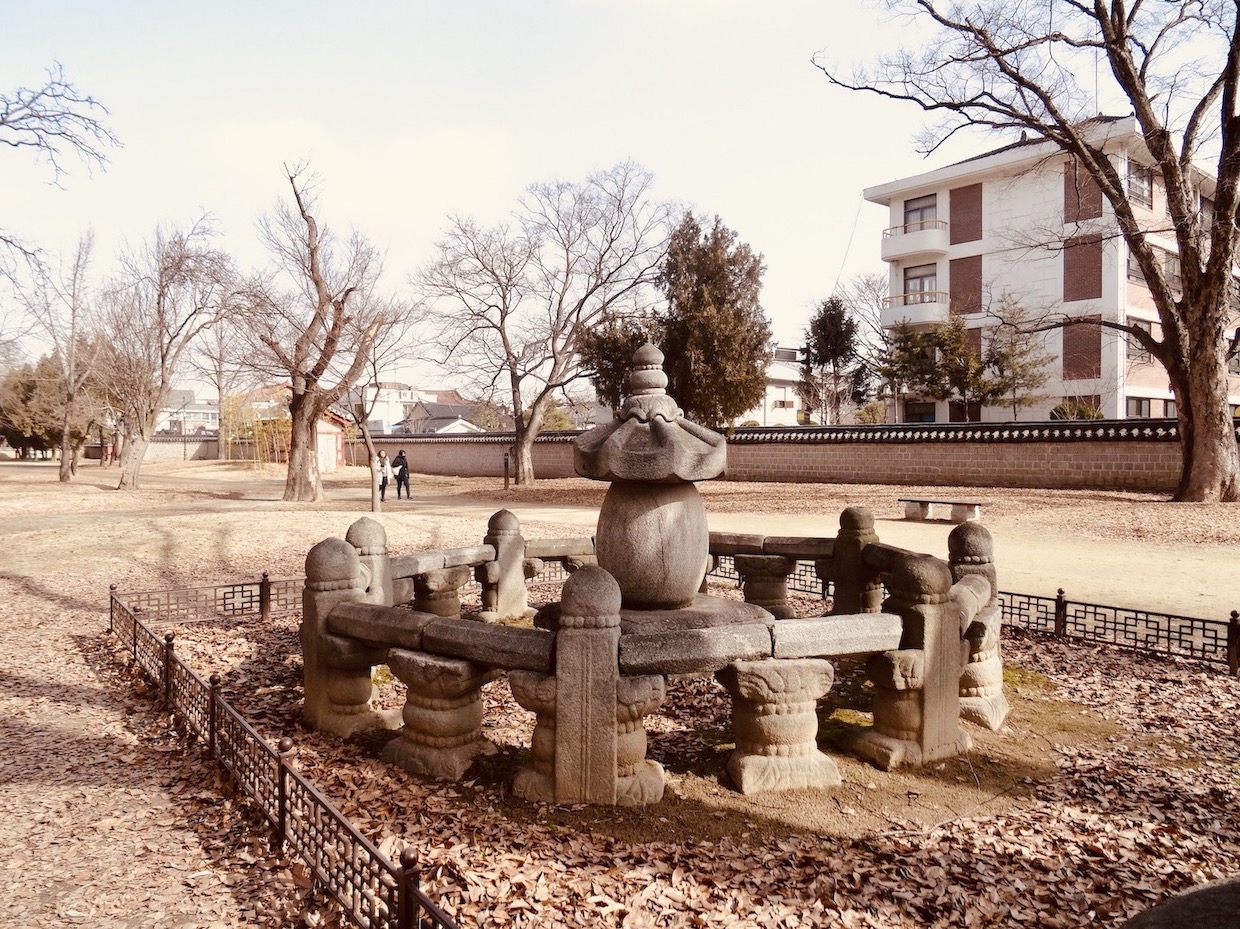 The shrine grounds are really pretty, especially on that autumnal afternoon with mattresses of brown leaves crunching underfoot. For many Koreans, a visit here is a chance to retread the steps of their favourite characters from the acclaimed TV series Moonlight Drawn By Clouds. Several episodes of the hit show were filmed here. 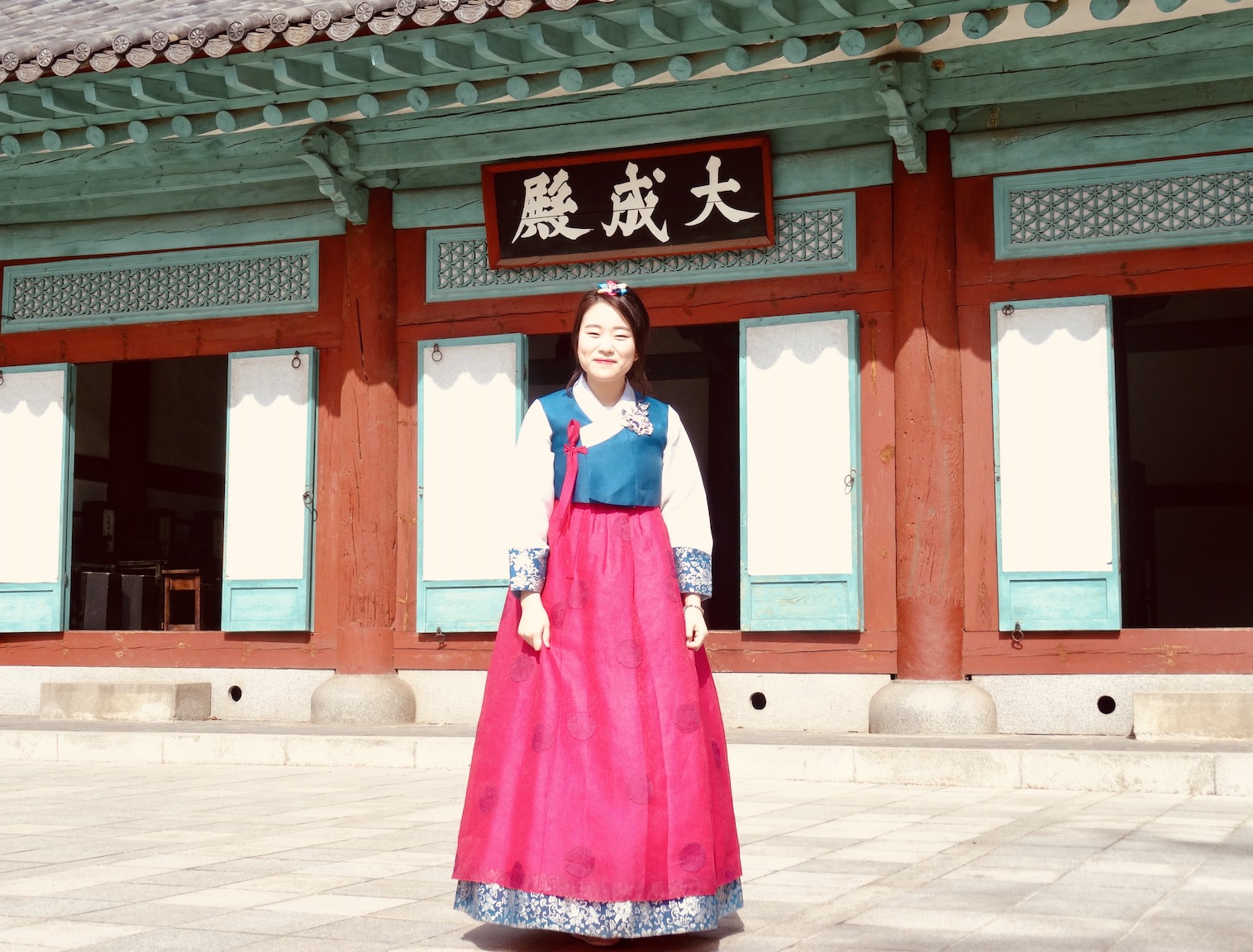 There was another girl sporting hanbok at Jeonju Hyanggyo School, a former government-run Confucian centre opened in the 1430s. Designated as a historical treasure, today it stands as a Confucian Museum and Joseon Dynasty resource centre. 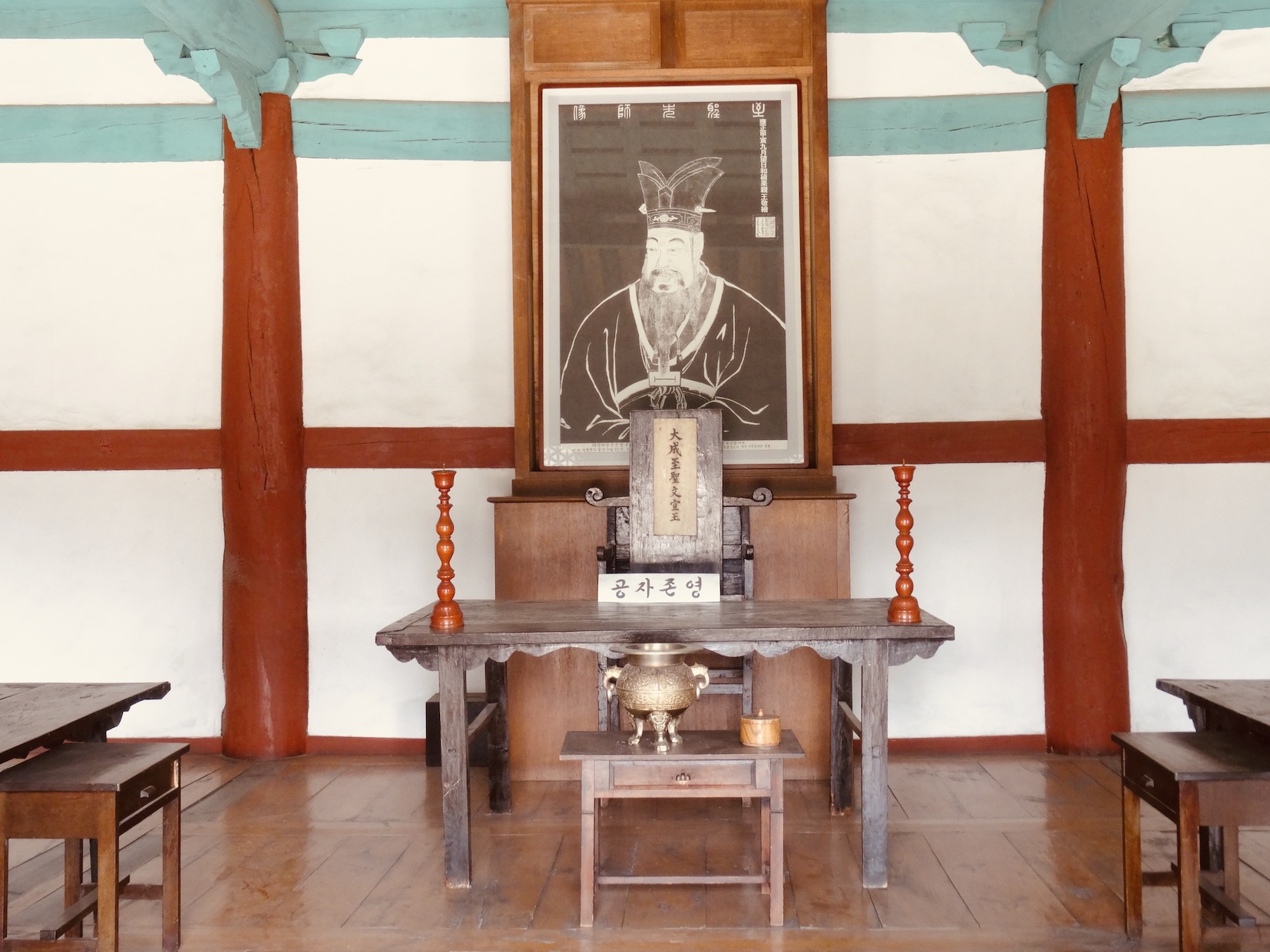 The Confucian Shrine at Hyanggyo School.

Everyone involved in its restoration deserves a solid round of applause. In addition to lecture halls, residential rooms and a library, there’s also a simple but elegant shrine to Confucius himself. Which got me thinking about my day exploring the great man’s hometown, the Chinese city of Qufu, back in 2009. 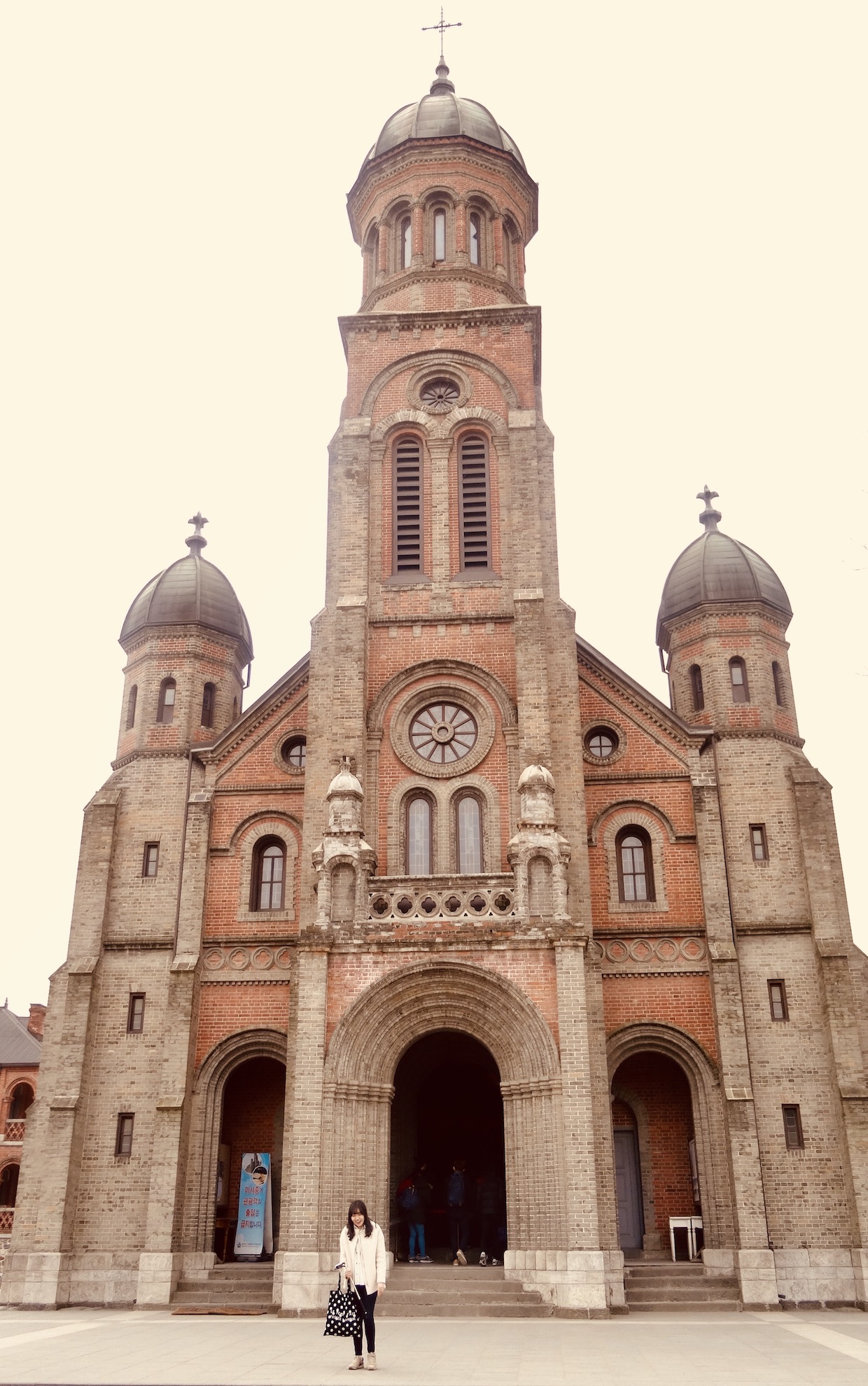 I was mapping out a route to a pretty section of The Jeonjuchun River when I stumbled across Jeondong Catholic Church. A French priest, Victor Louis Poisnel, built the church over a seven year period between 1908 and 1914.  He dedicated it to the lives of a dozen Christian martyrs, who were executed at the site in 1791. Unfortunately, the church is typically closed to the public, except during mass. 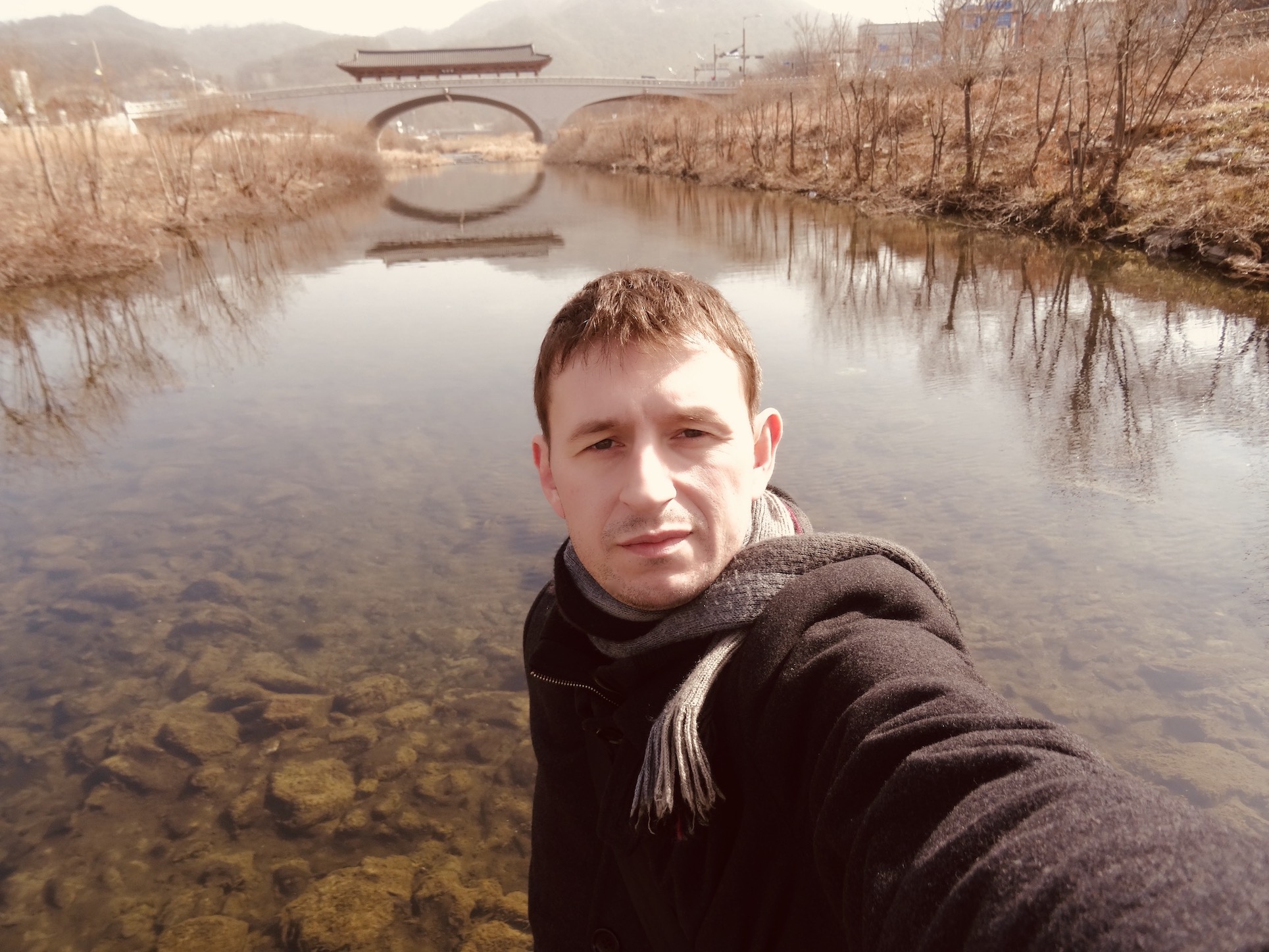 When I finally reached the river, I literally had to stop and catch my breath at the almost ethereal view of Namcheongyo Bridge. Built in the 1990s, this grey brick structure features a giant wooden pavilion, favoured by locals as one of the city’s finest sunset spots. Not that I got to enjoy much of a sunset on that particular wintry February afternoon. 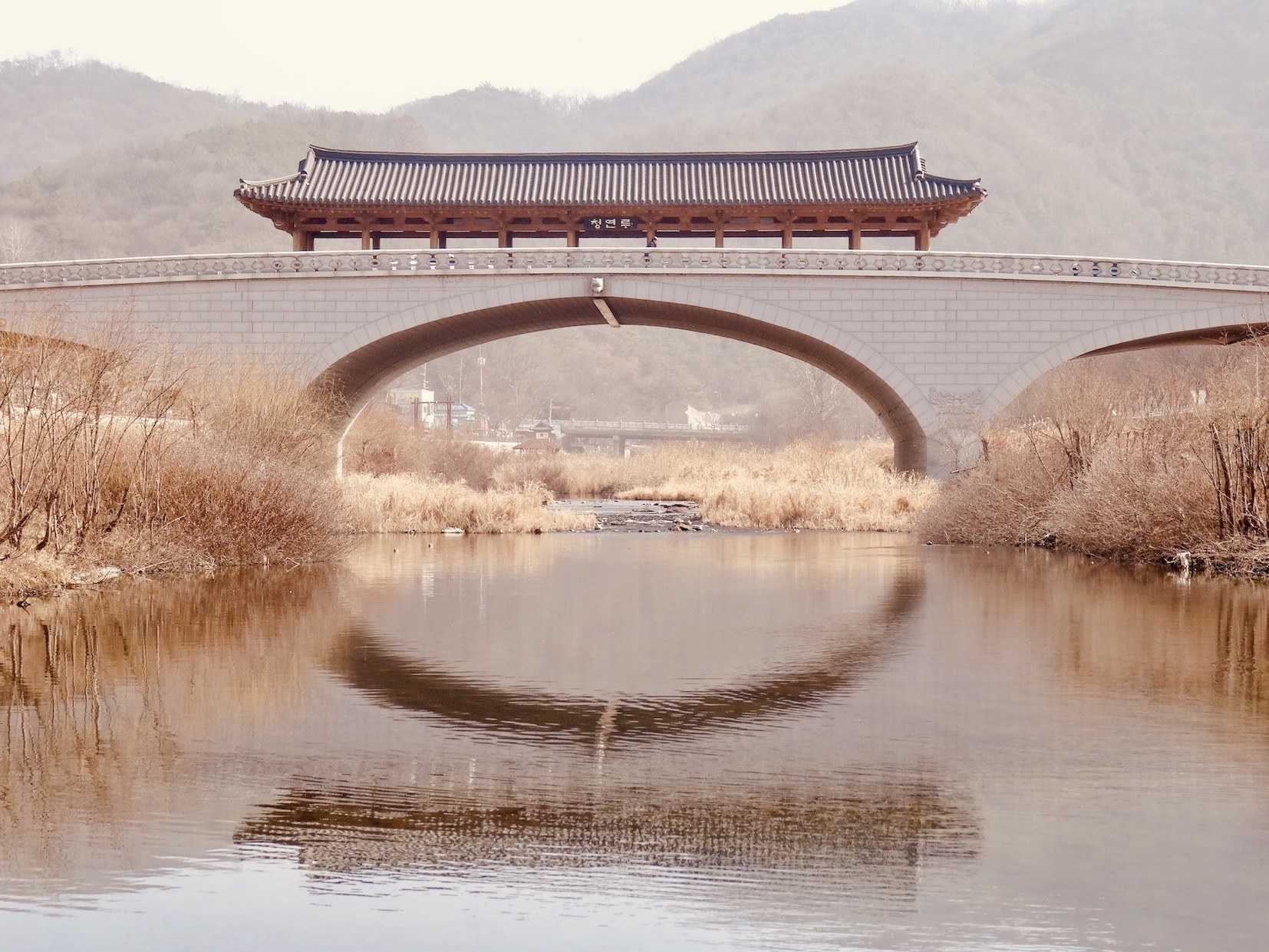 I had a great couple of days taking in Jeonju’s limited, low-key delights. However, never in a million years did I ever expect I’d go back. But it’s funny how life turns out. In March 2018 my brother Cory and his fiancé Kaley came to Jeonju on a one year contract teaching English at a language school. 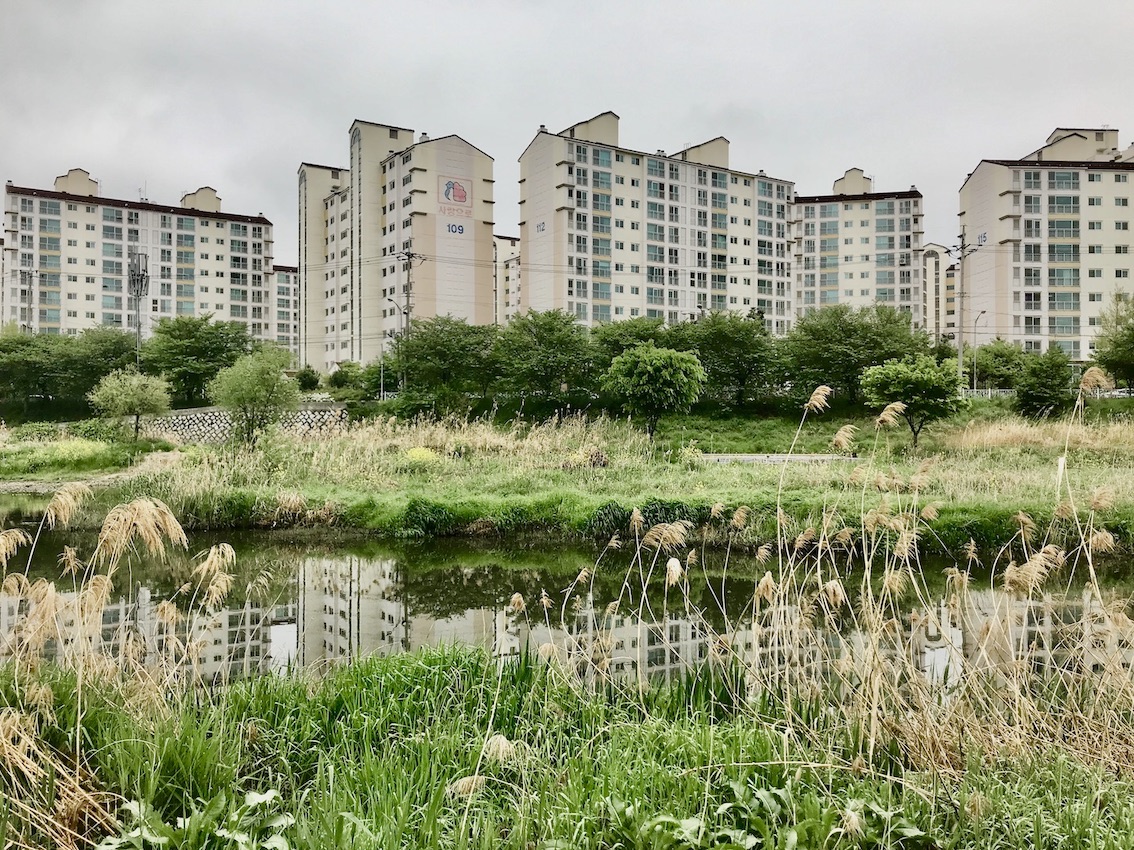 A year later, in April 2019, I’d just finished two years of teaching in Zhejiang Province, China. Free to head off wherever I pleased, I decided on a return to South Korea. Having spent a week catching up with my old friend Wonderboy in the city of Daegu, it was off to Jeonju to see my brother.

I did virtually zero exploring on that second visit. Cory and Kaley had to teach and I had lots of blog work, along with some tedious chores, including the purchase of a new suitcase for my flight back to London. What free time we did have went on a very cool day trip out to the country, where a hike up Maisan Mountain led to the highly unique Tapsa Temple. 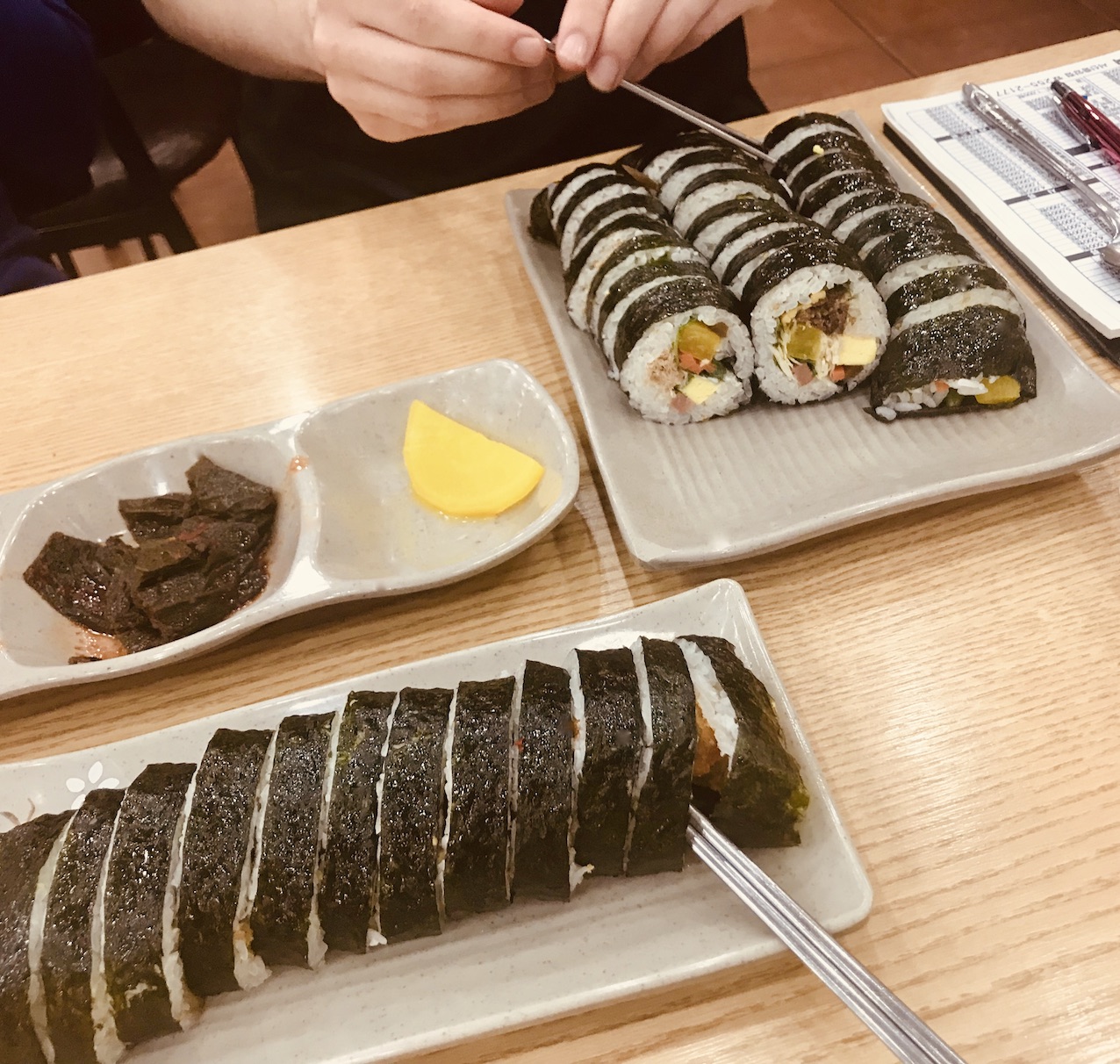 Nevertheless, I did get to tick off some essential Jeonju food spots. On my first evening, Cory and Kaley took me to Gimbap Heaven on Seosindong-ro. You can’t leave South Korea without trying Gimbap, a kind of seaweed and rice sushi style roll packed with various fillings. In Gimbap Heaven you grab a menu sheet and tick off what fillings you want. A bit of egg? Check! Some tuna, a dash of pickle? Why not. Walnut and cream cheese? It’s all so, so good. 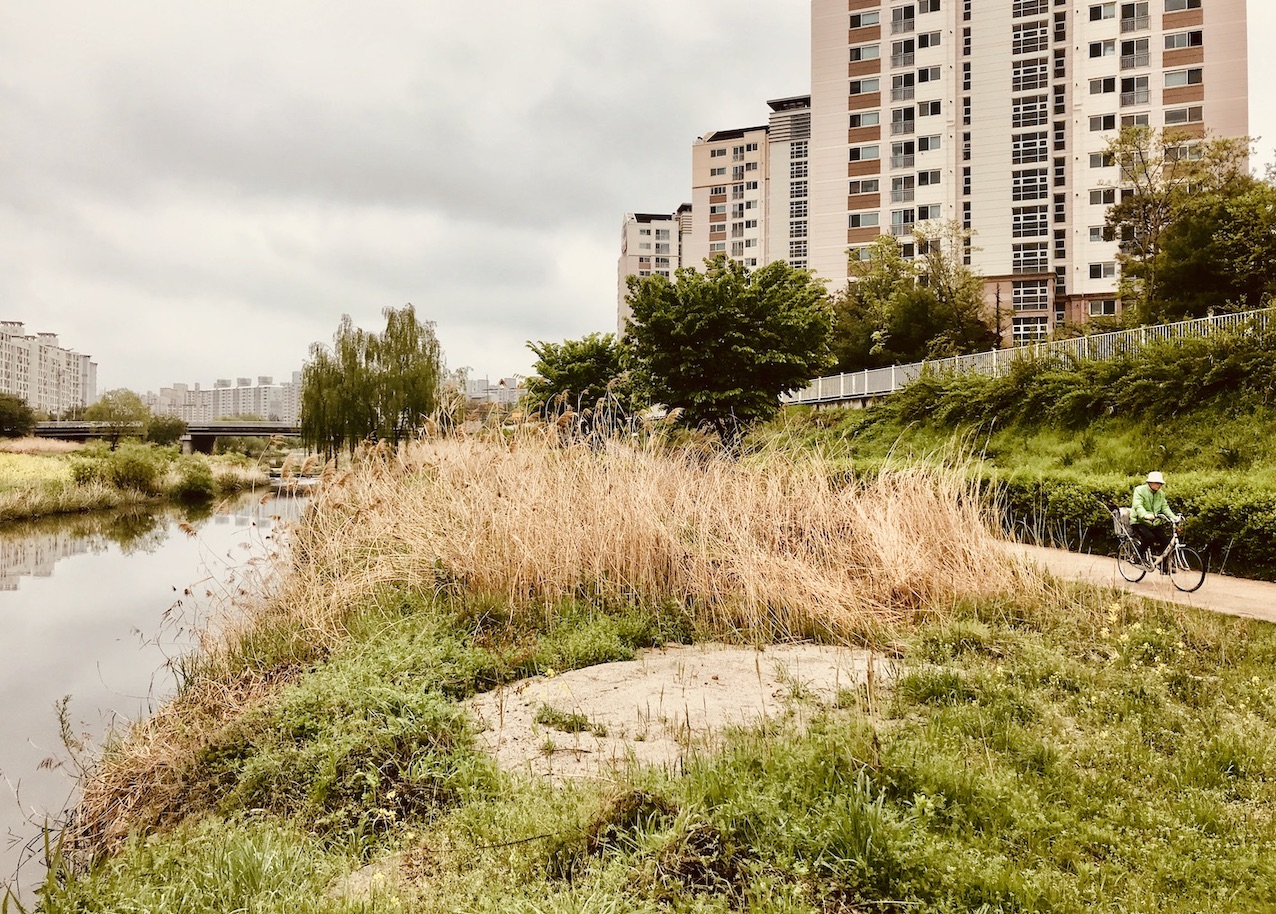 One afternoon, in desperate need of a break from blogging, I threw on some shorts and trainers and went jogging down a section of The Jeonjuchun River Trail. I hadn’t realised that the brief section of river path I’d seen four years earlier was actually part of an extensive network of walking and cycling routes that span virtually the entire city. 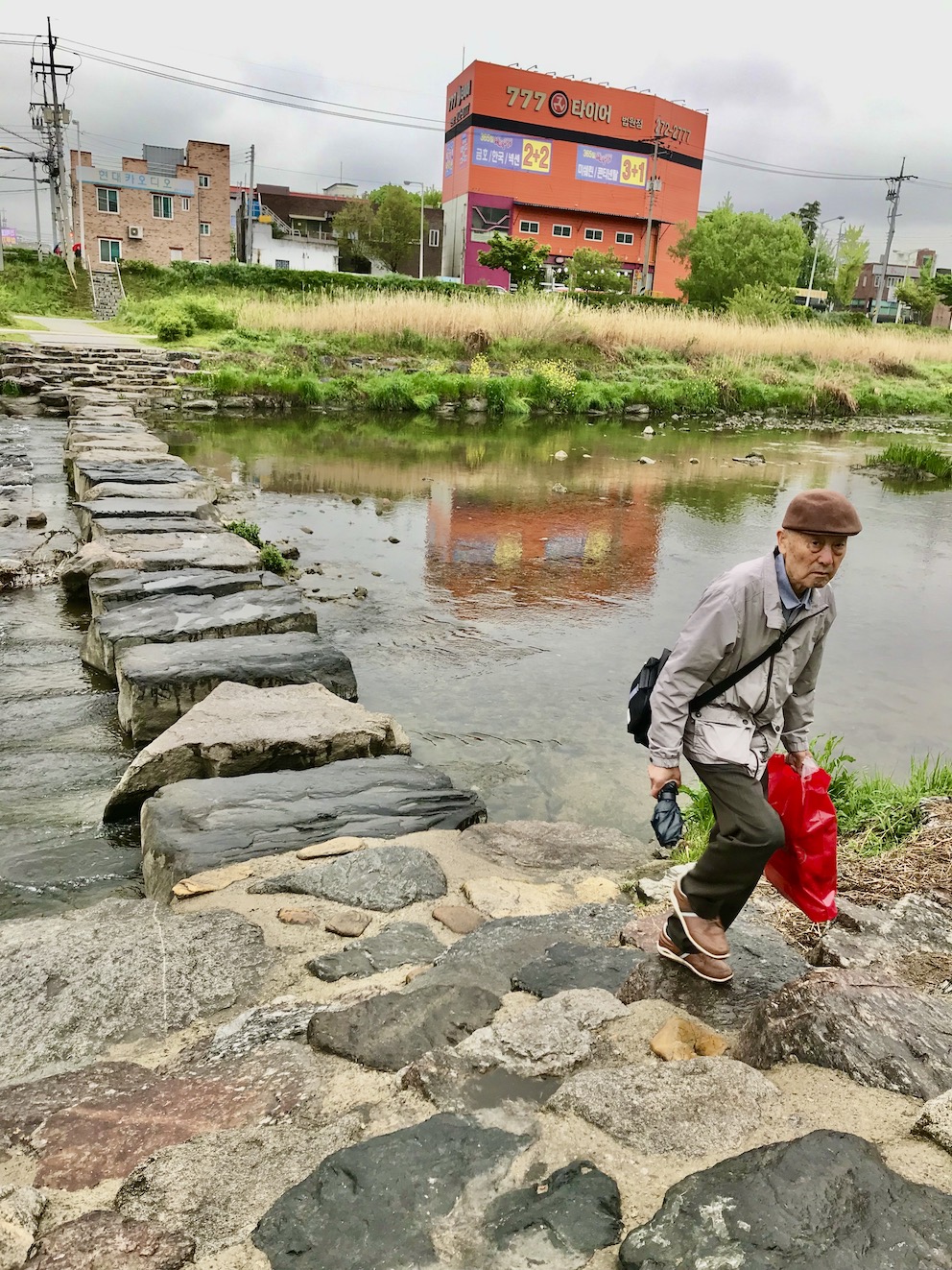 Although somewhat wild, there is a certain beauty to the river trail, which has been a huge Jeonju eco project for the better part of a decade. Local authorities took what was a severely polluted river and transformed it into a thriving habitat for all manner of fish and otters. 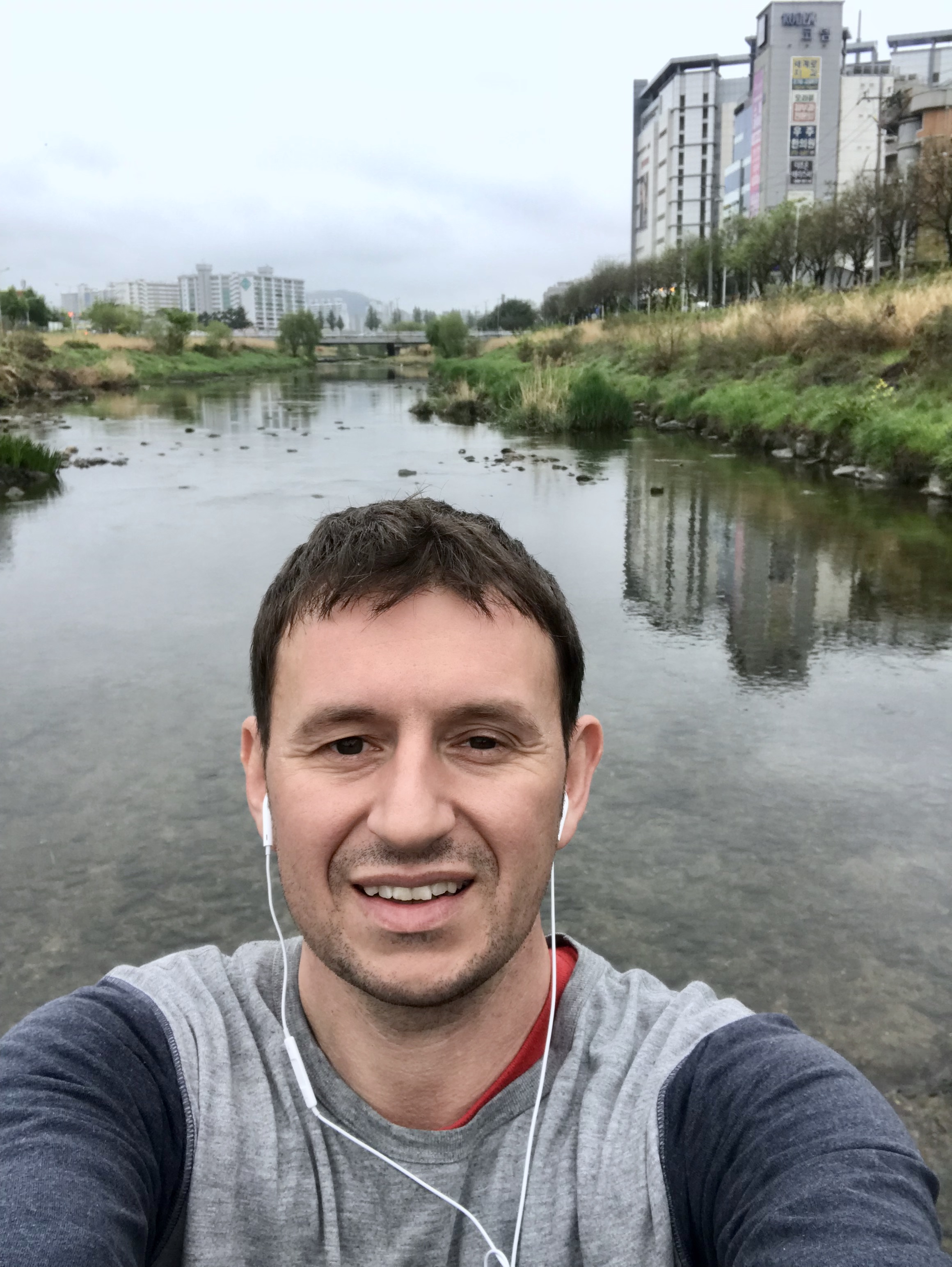 Furthermore, the water is now so clean that it qualifies as Grade 1 drinking water! No, I didn’t test it out. I really had only intended on doing a swift thirty minute jog. But at some point I suddenly realised that I’d been jogging for over an hour and really should start heading back before the ever-threatening sky opened up on me. 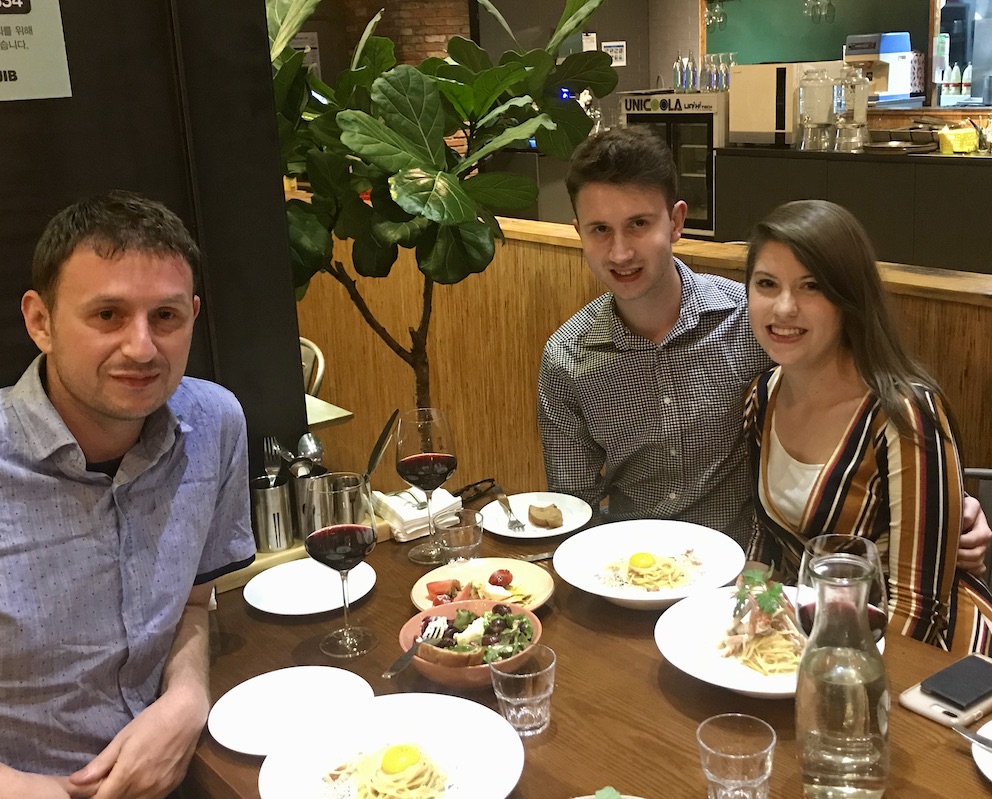 Ssunine Store. No, that’s not a typo.

On my final night, we all had dinner at the oddly-named Ssunine Store. Or Ssunine Jib. Or Sunny Jips. Whatever they call themselves, it doesn’t exactly roll off the tongue. The restaurant does Koreany interpretations of pizza, pasta and salads, among other things. The place was actually pretty swanky and for the most part the food justified the eyebrow-raising bill. 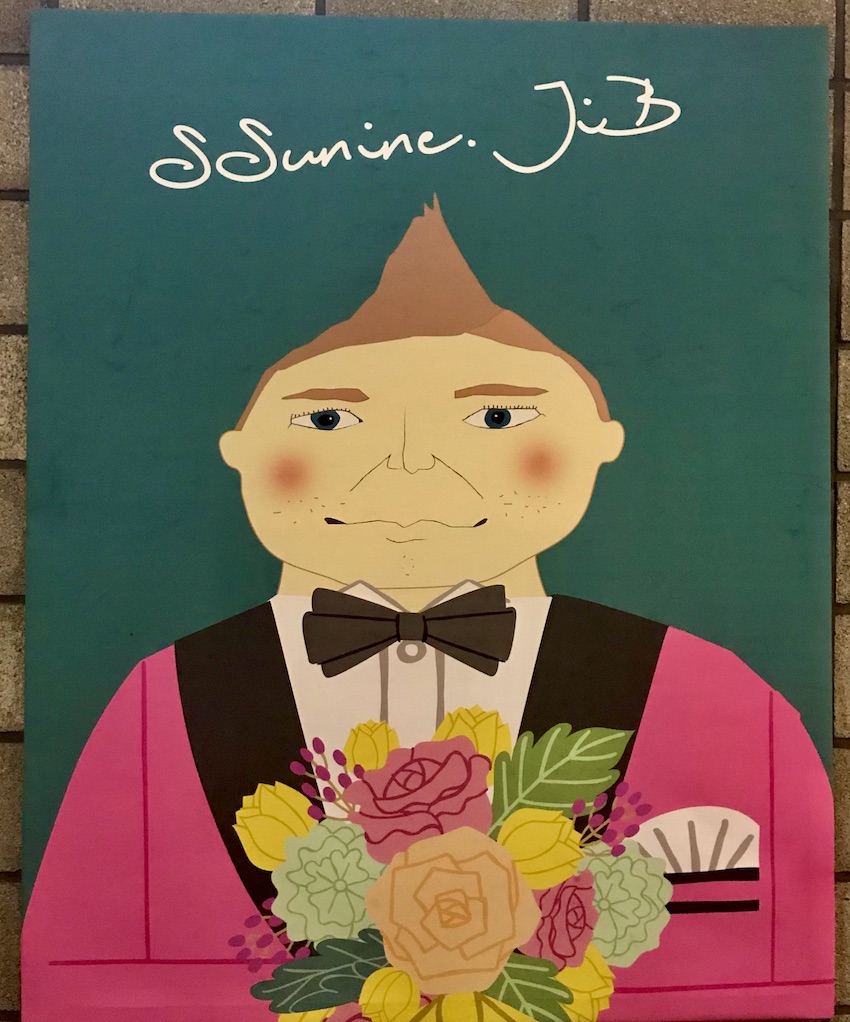 Naturally, the ordering process proved chaotic. They had a meal deal offer and initially seemed quite happy with our choices. Later though, they went back on our preferred dessert (crushed Oreos in ice cream), saying it wasn’t part of the deal. They also seemed unhappy/confused/other about the fact that we ordered an extra pizza. But hey, this is often how it goes in Asia, even when you pay a bit more. I would be amazed if my future travels included a third visit to the city of Jeonju, but who the heck knows, life is full of surprises! 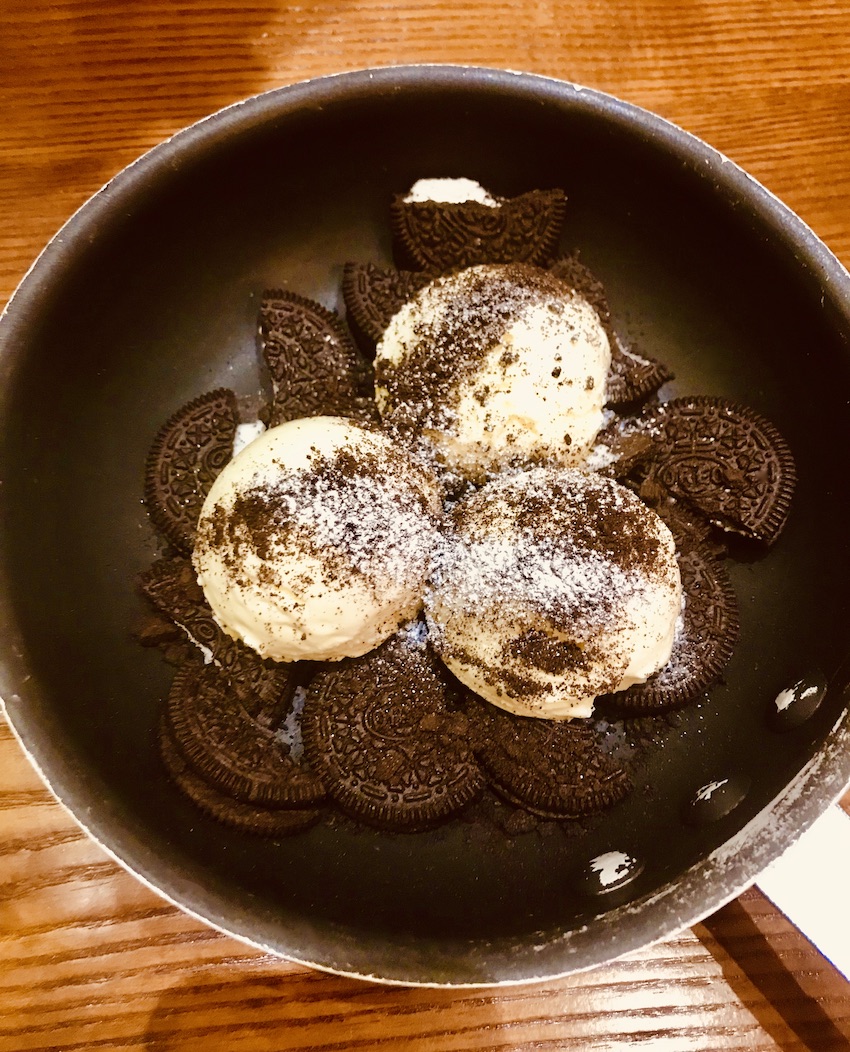 Cory and Kaley on the other hand definitely won’t be going back to Jeonju. I’ve been teaching English for the better part of twenty years and, despite a few crappy jobs, have always managed to avoid those nightmare school scenarios I often hear and read about. Cory and Kaley suffered an appalling year teaching for Little River Day School. To read about their experience, check out this Reddit review.

Like this? Then why not check out my other articles from all around South Korea.