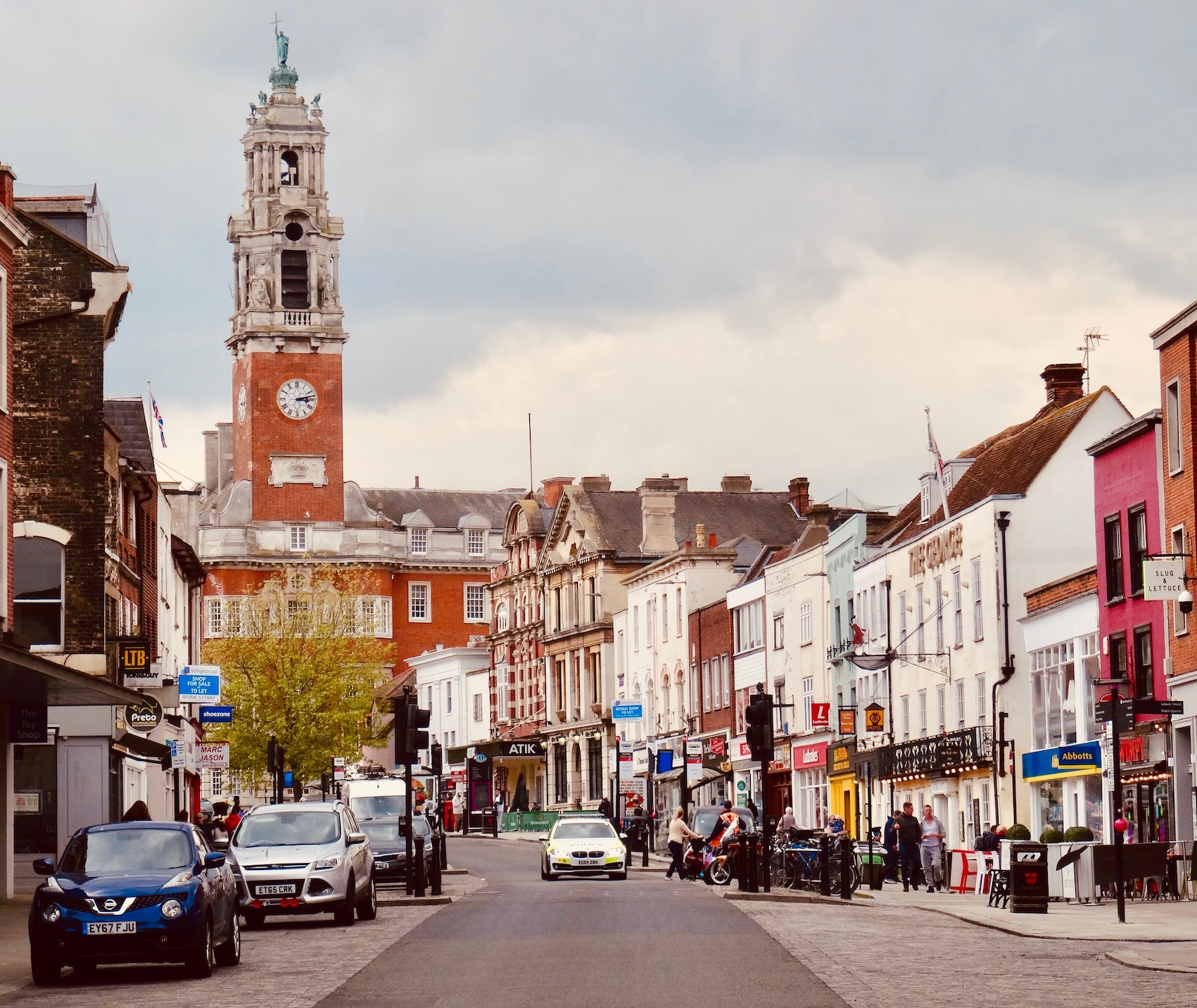 May 2019. Following a string of travel reports from across the town’s most interesting sights, it’s time for me to wrap up my series with a rundown of Cool Spots Around Colchester.

Whenever I visit new villages, towns and cities, I usually blitz the local cafe scene. However, in Colchester my dear old grandma made this virtually impossible. Each day, before I headed out, she insisted on cooking up a big breakfast, with several mugs of piping hot coffee. Moreover, she’d rummage through her cupboards for a picnic to take with me. One day she gifted me a mini pack of ginger nut biscuits, an apple and a bag of salt and vinegar crisps. Man, I certainly wasn’t going to starve. 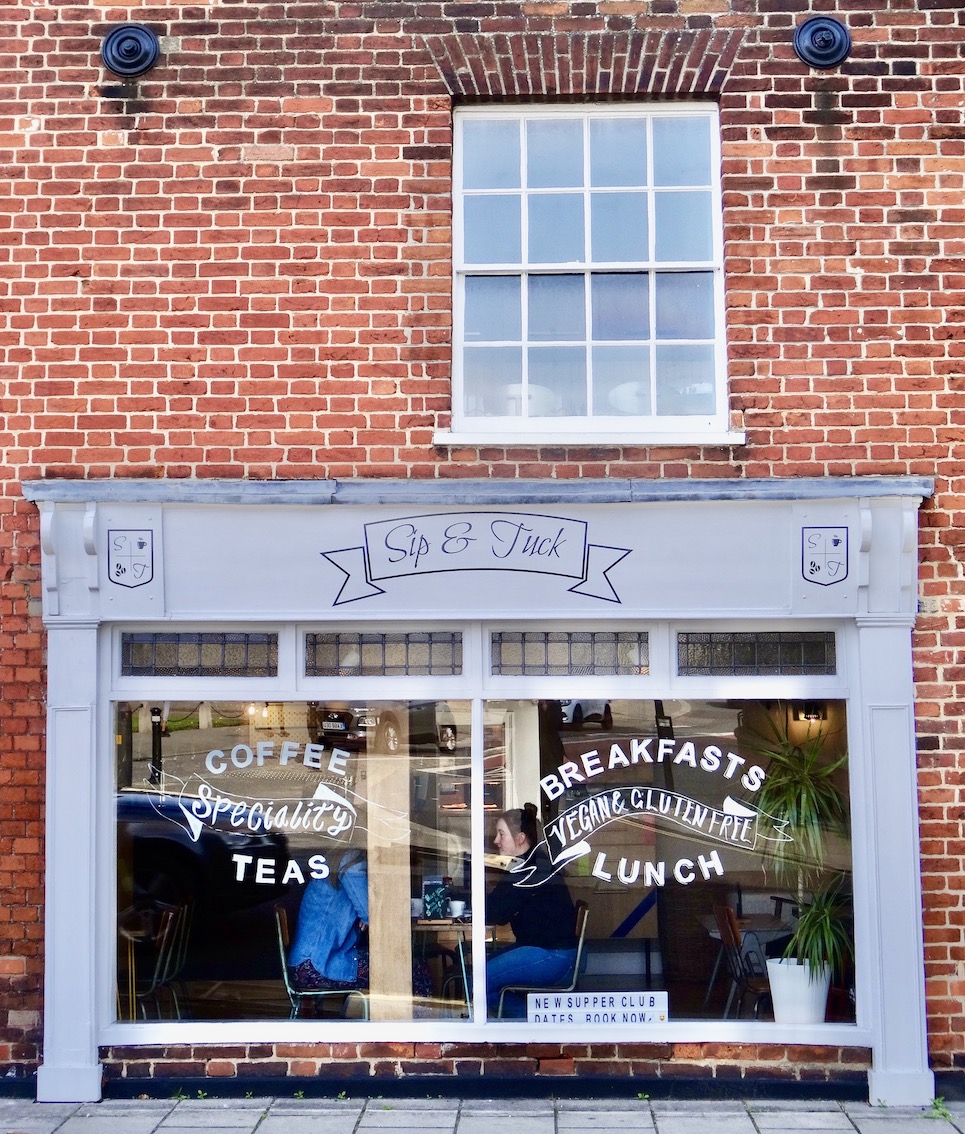 Nevertheless, I still managed to tick off one cafe during my Colchester wanderings. Sip & Tuck is an independent bistro located right in the town’s historic district on The High Street. In addition to speciality coffees, they offer a range of dishes made from locally sourced produce.

I was just in for a latte that day. But they literally do everything, from breakfast, lunch and dinner to beers, wines and cocktails. A cosy log fire keeps customers nice and toasty in the winter months, while a small outdoor seating area is great for that endangered species, The English Summer. 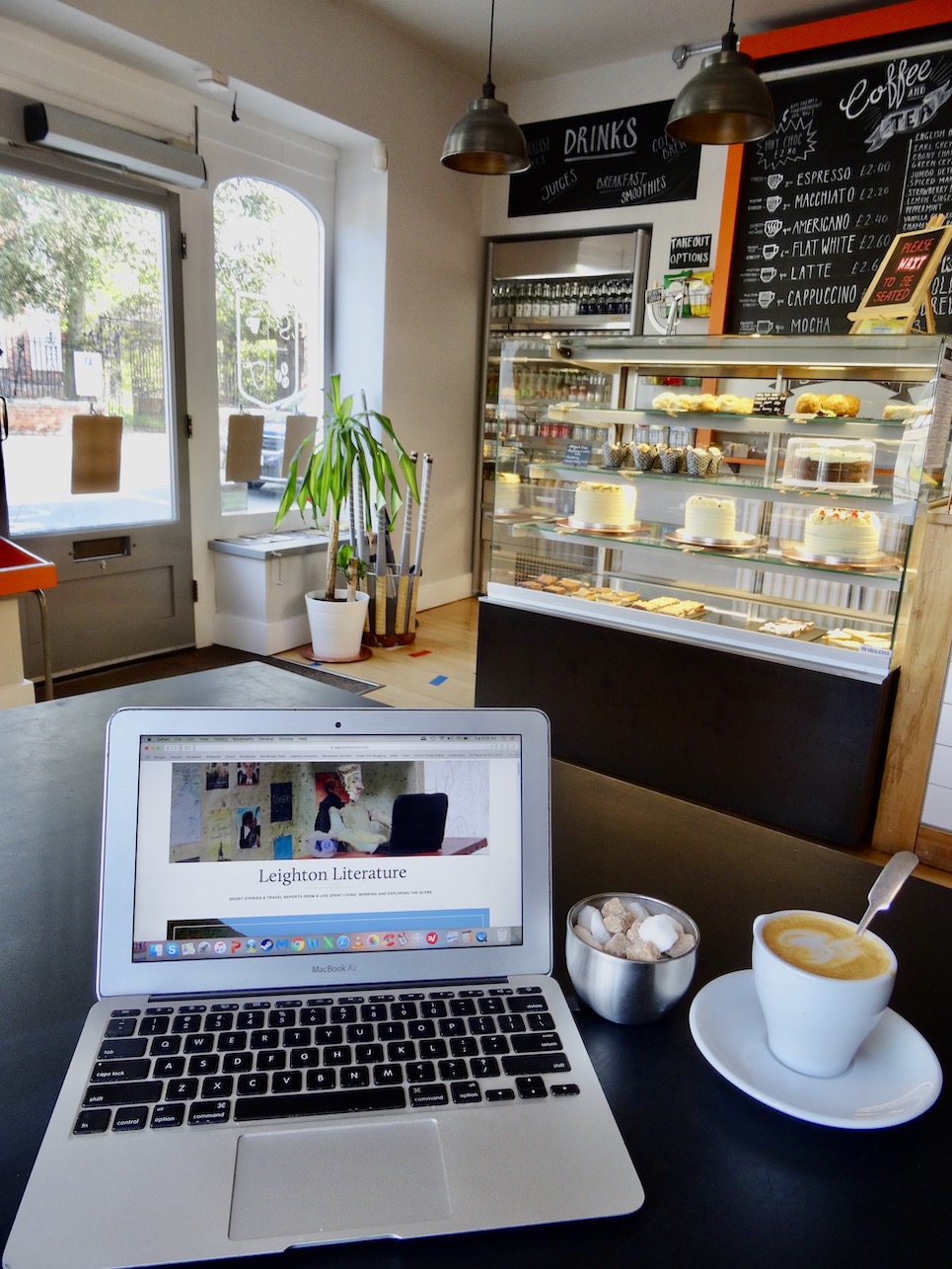 They also have a retro Tuck Shop, which reminded me of my boarding school days queuing up for penny sweets and fizzy pop. The products on offer here though are much fancier. I’m talking organic cooking sauces, fusion Indian teas, bottles of fruity brown sauce and fair trade sea salt. The staff are really friendly and attentive, although sadly they couldn’t do anything about the crappy WIFI. 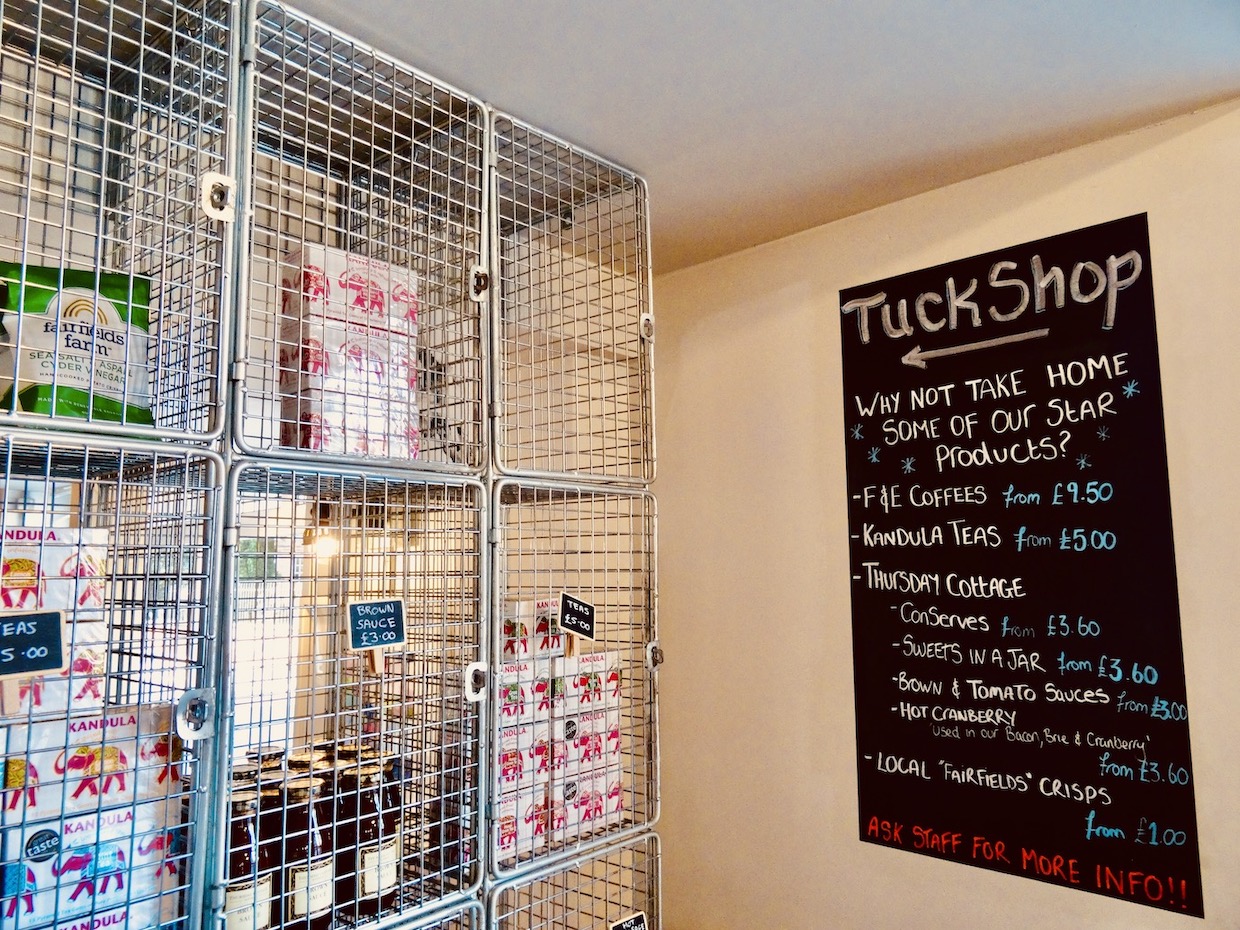 If like me you’ve got an incurable sweet tooth, then all paths in Colchester invariably lead to Darcy’s Traditional Sweet Shoppe on Eld Lane. You’ve gotta love the cutesy olde worlde exterior, which immediately struck me as very Charlie and the Chocolate Factory. 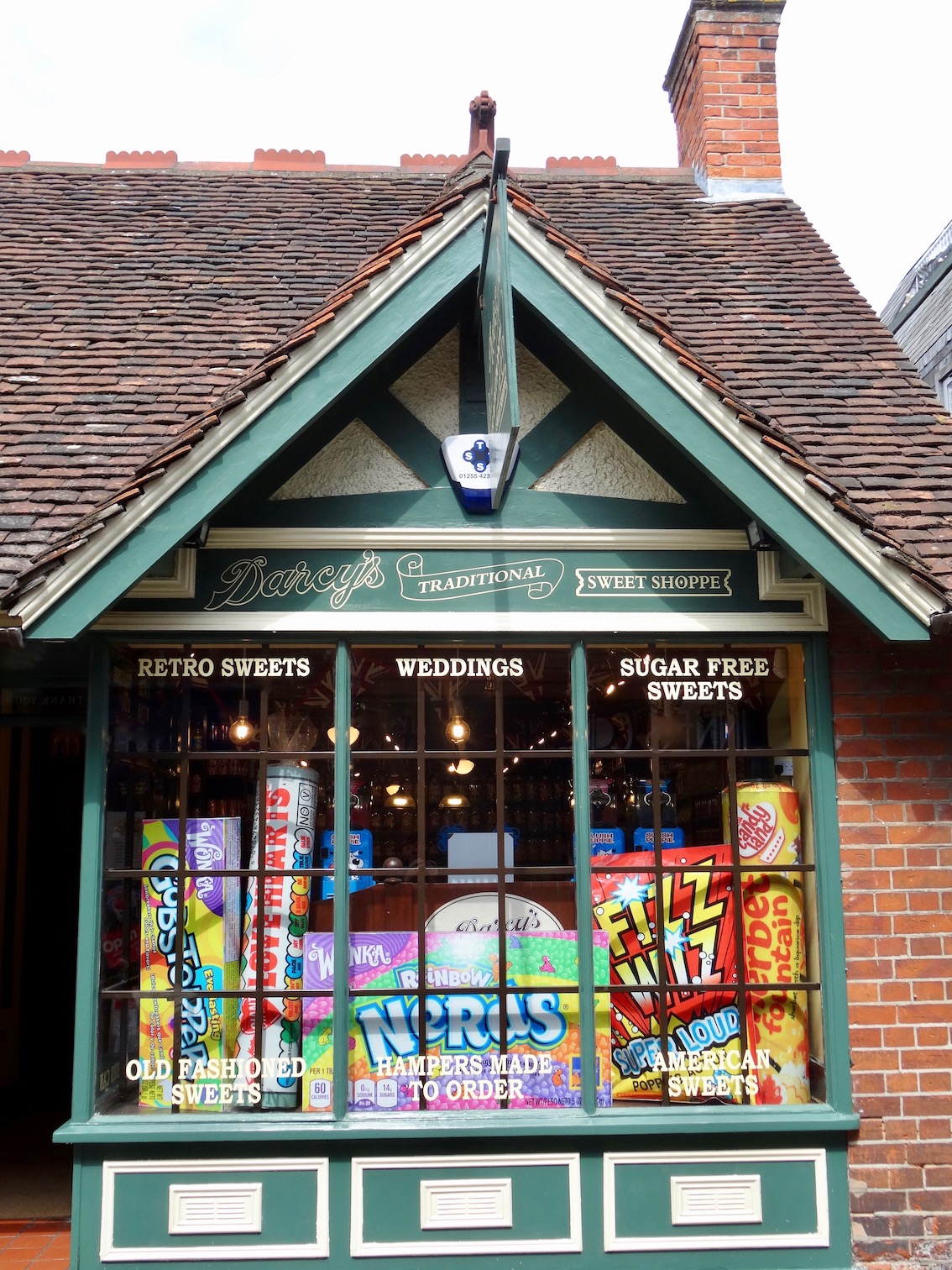 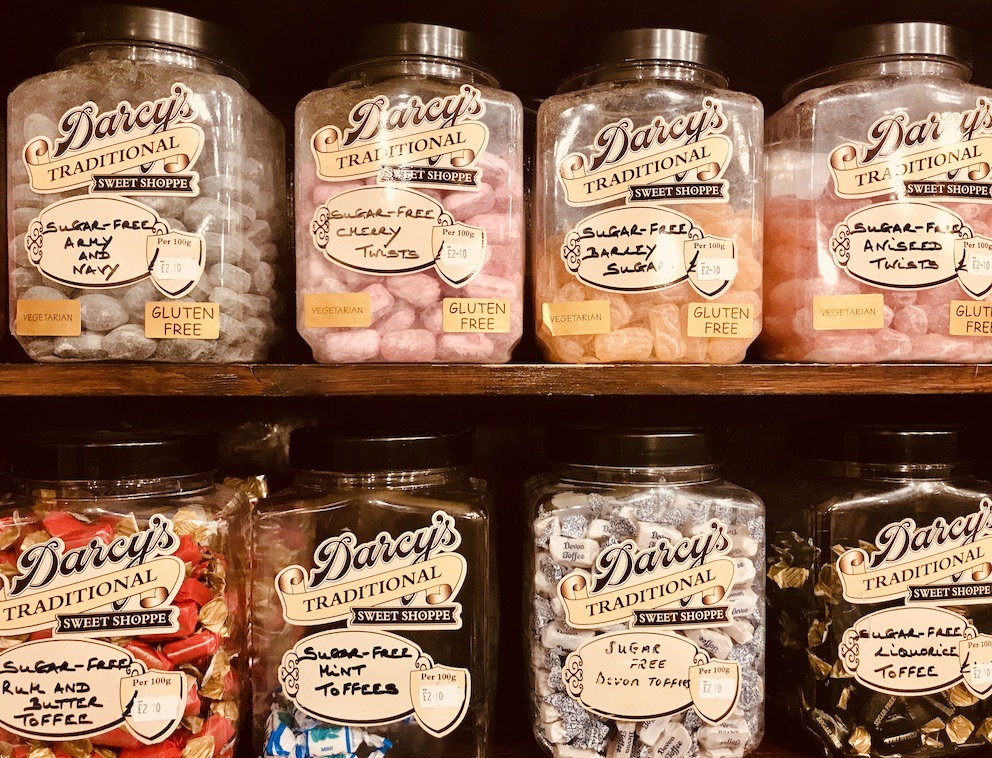 Furthermore, in line with the conscientious times we live in, they cater to vegetarians and have a host of gluten free treats. Darcy’s is the brainchild of local businessman Jamie Mileare, who admits his little empire is all about bottling wistful childhood memories alongside a sense of traditional, historic Britain. In fact, he named his shop after Lady D’Arcy, a local philanthropist and property owner. 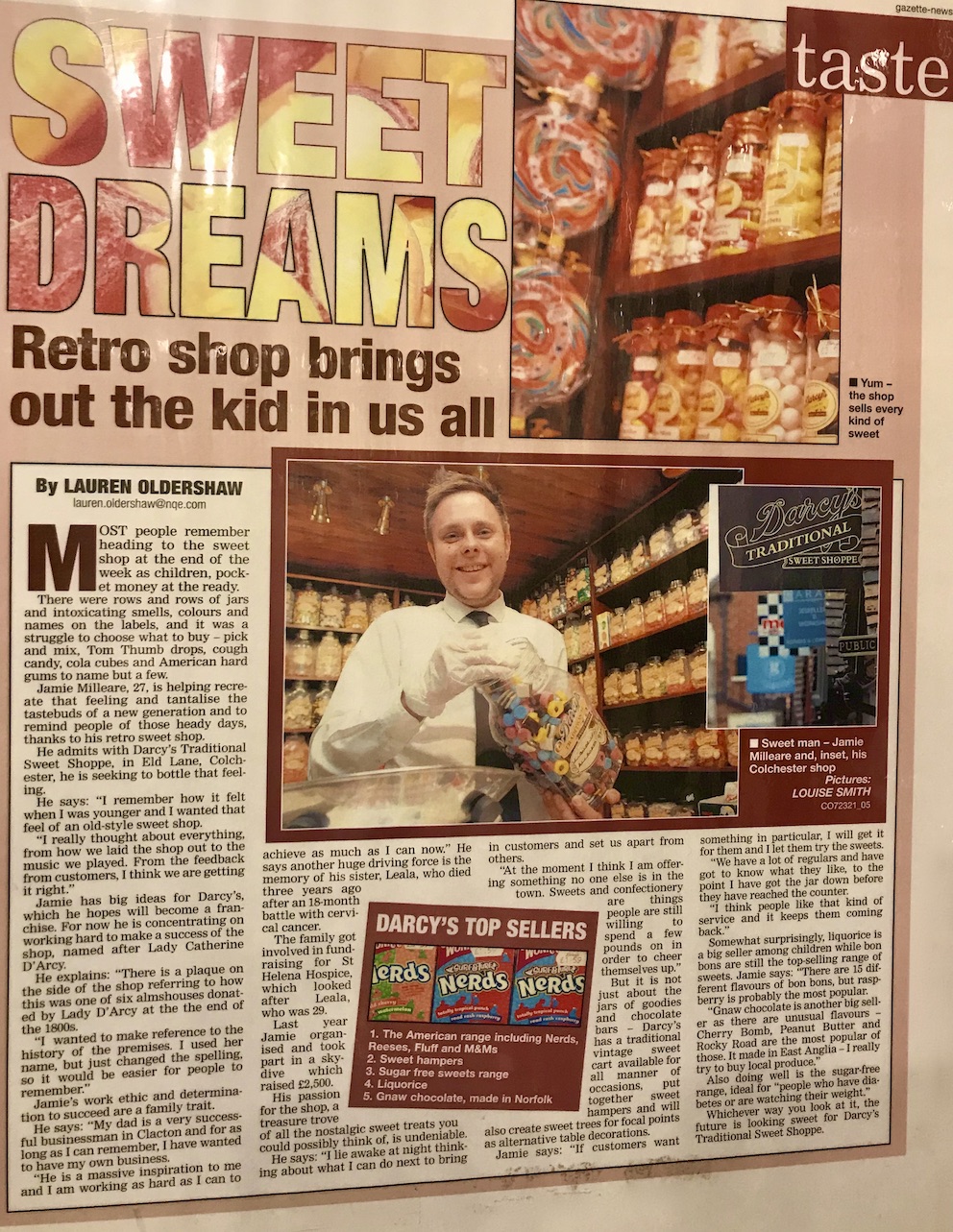 Jamie is no stranger to popping up in the local news. He’s hit the headlines for both his charity work and, unfortunately, when professional thieves robbed his store! The raid in question saw the criminals grab nearly a dozen jars of jellybeans, among other treasures. 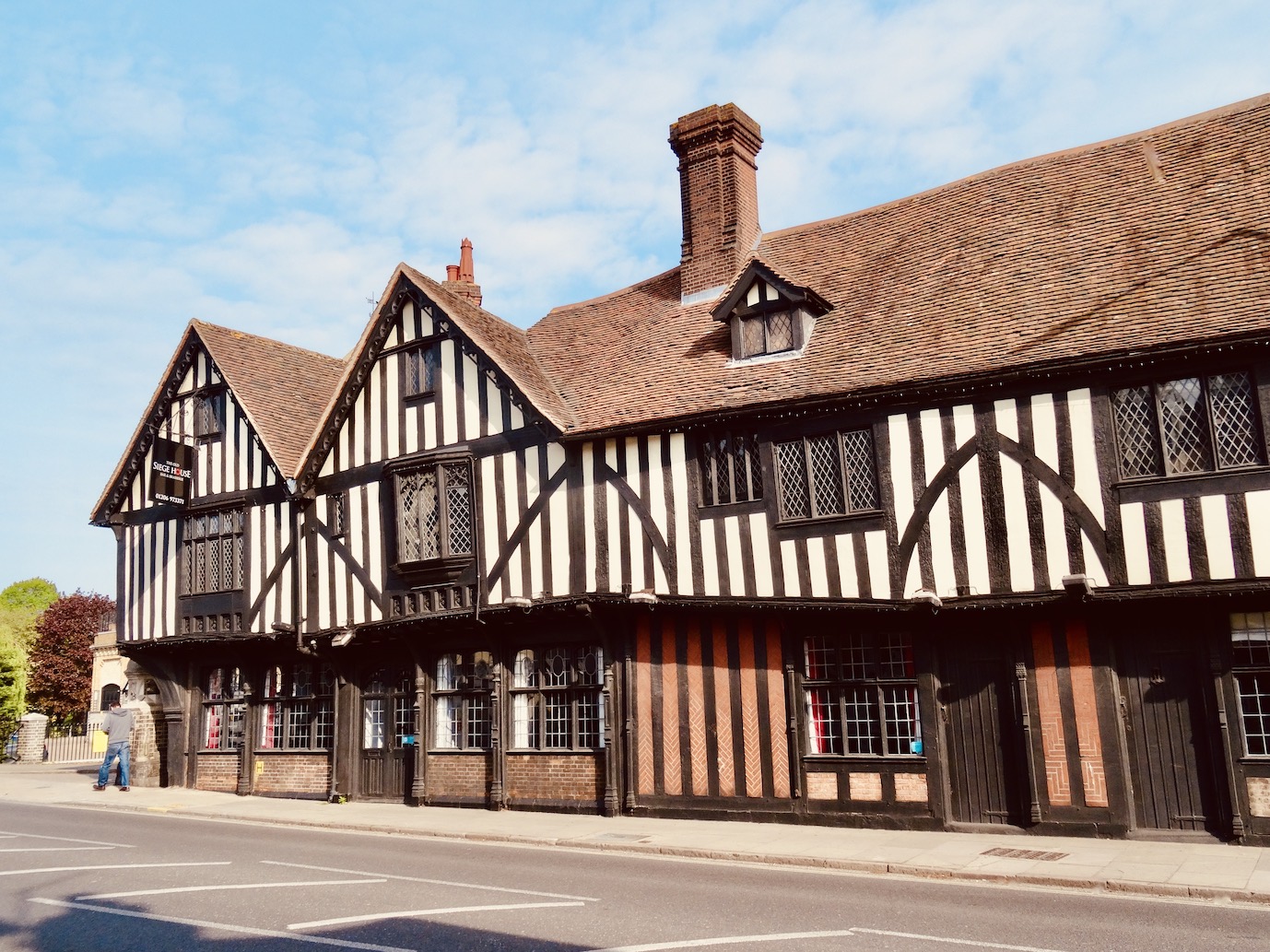 Architecturally, Colchester is a very pretty town. Every day, on my way to and from my nan’s place, I’d pass a number of curiously handsome buildings. One of these is The Old Siege House Bar & Brassiere on East Street. Built in the late 15th century as a grand townhouse, its name references The Siege of Colchester during The English Civil War. 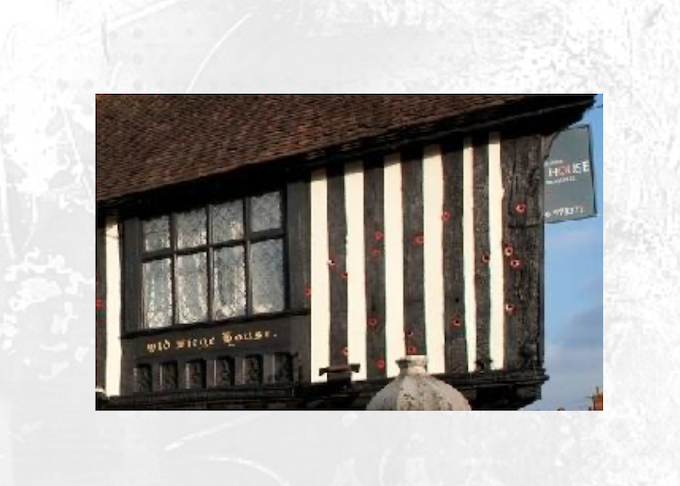 Situated on the main road to Colchester Castle, the house actually sustained damage as The Royalists and Parliamentarians exchanged gunfire. Amazingly, you can still see bullet holes on the west side and south front of the building. Which is certainly something to think about as you chew on your steak in mushroom sauce! 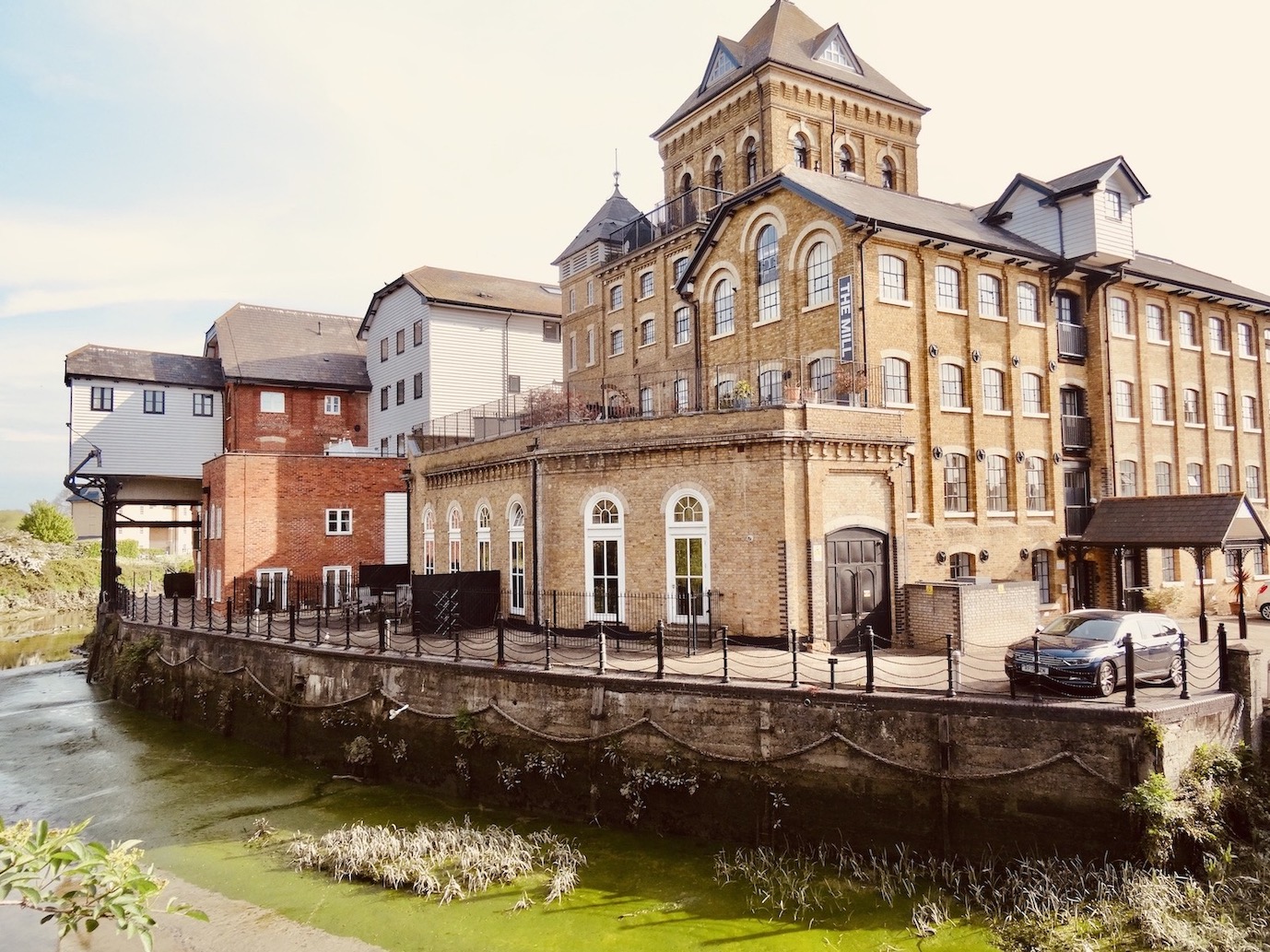 Another notable structure, admittedly more curious than handsome, is a large apartment and office complex called The Mill. It dates back to the 15th century when a corn mill opened here. In the late 1970s it was turned into a fancy four star hotel, while today it houses some of Colchester’s swankiest apartments. Indeed some of the living rooms have views over a pretty bend in The River Colne. 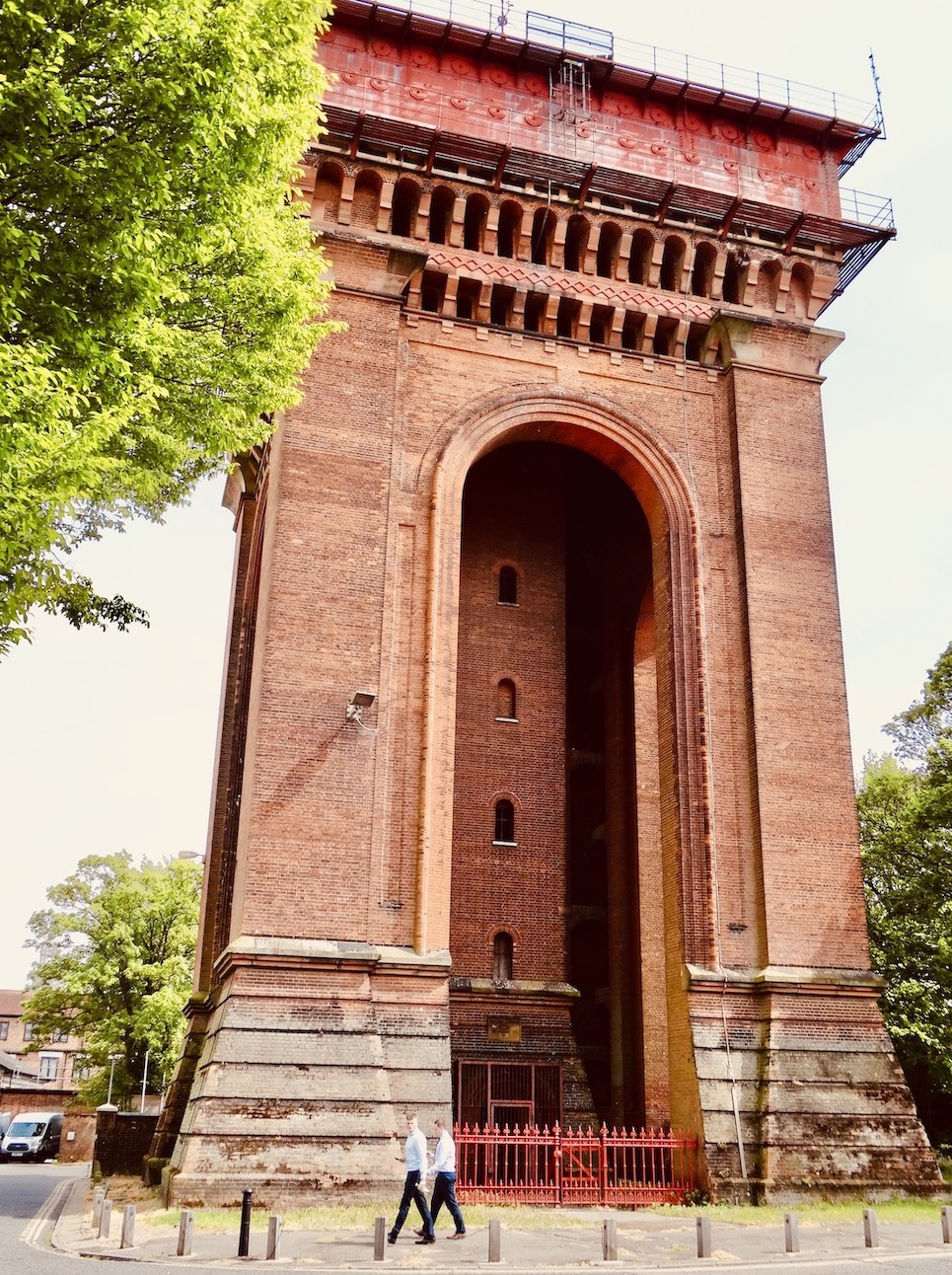 This is Colchester’s Jumbo Water Tower. Local authorities built the beast back in 1883 to provide the town with regular running water. Before that, most folk had to rely on badly polluted wells, while wealthy families paid a private waterworks company for a few hours of clean water every day.

And yet the new tower wasn’t without controversy. Many considered it an eyesore, especially Reverend John Irvine in a nearby rectory. Making an official complaint to Colchester Council, he said that the tower was like “a large elephant” looming over the church. The council dismissed his complaints and local residents began calling it the Jumbo Water Tower. 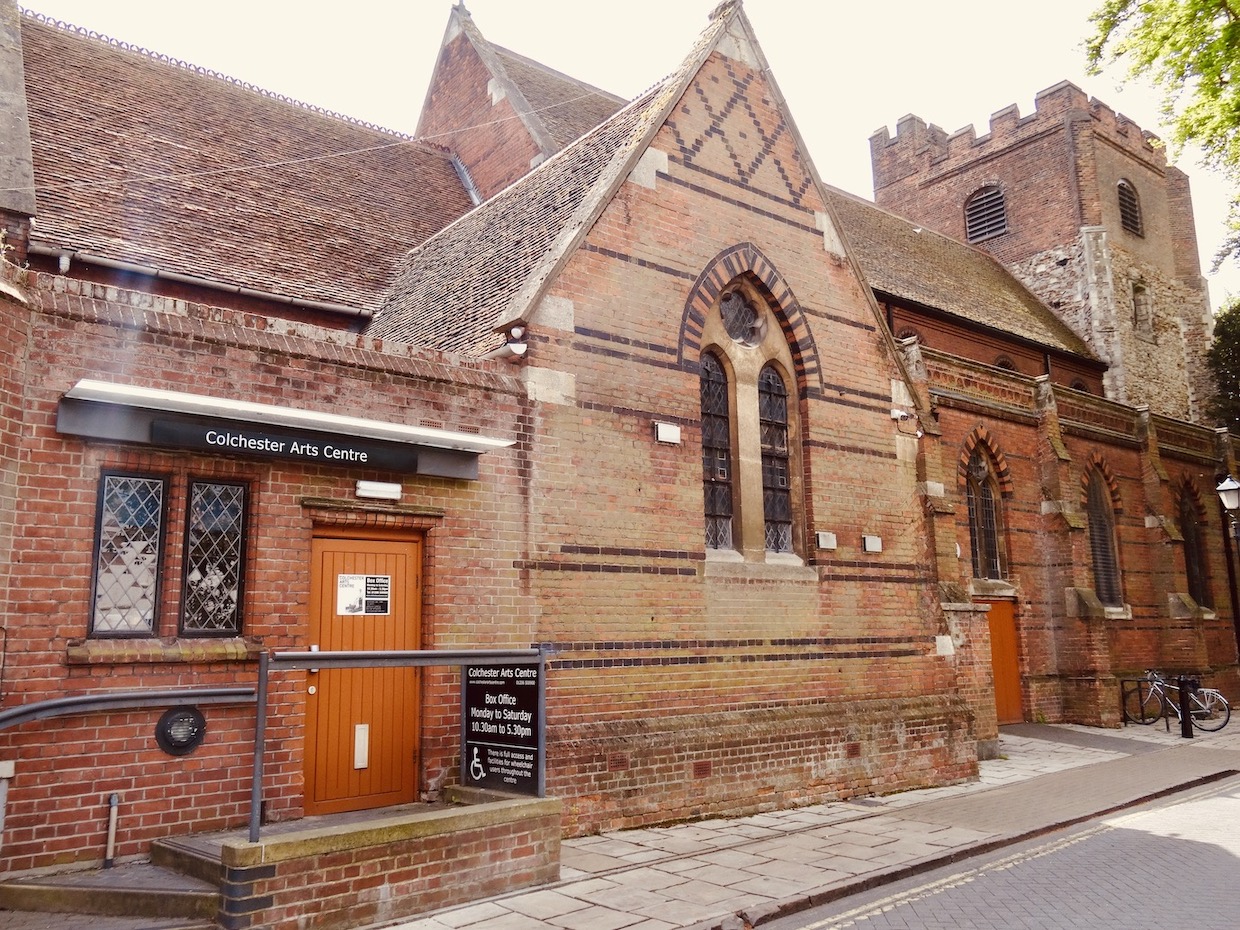 Colchester might be a small town, but it has a flourishing arts scene. To begin with, you’ve got Firstsite Gallery, already reviewed on these pages. And then there’s Colchester Arts Centre, which hosts live music, plays, stand up comedy and movie nights.

The entire operation was launched from the abandoned shell of the 13th century St. Mary at the Walls Church. Interestingly, the church’s graveyard still sits mostly intact. 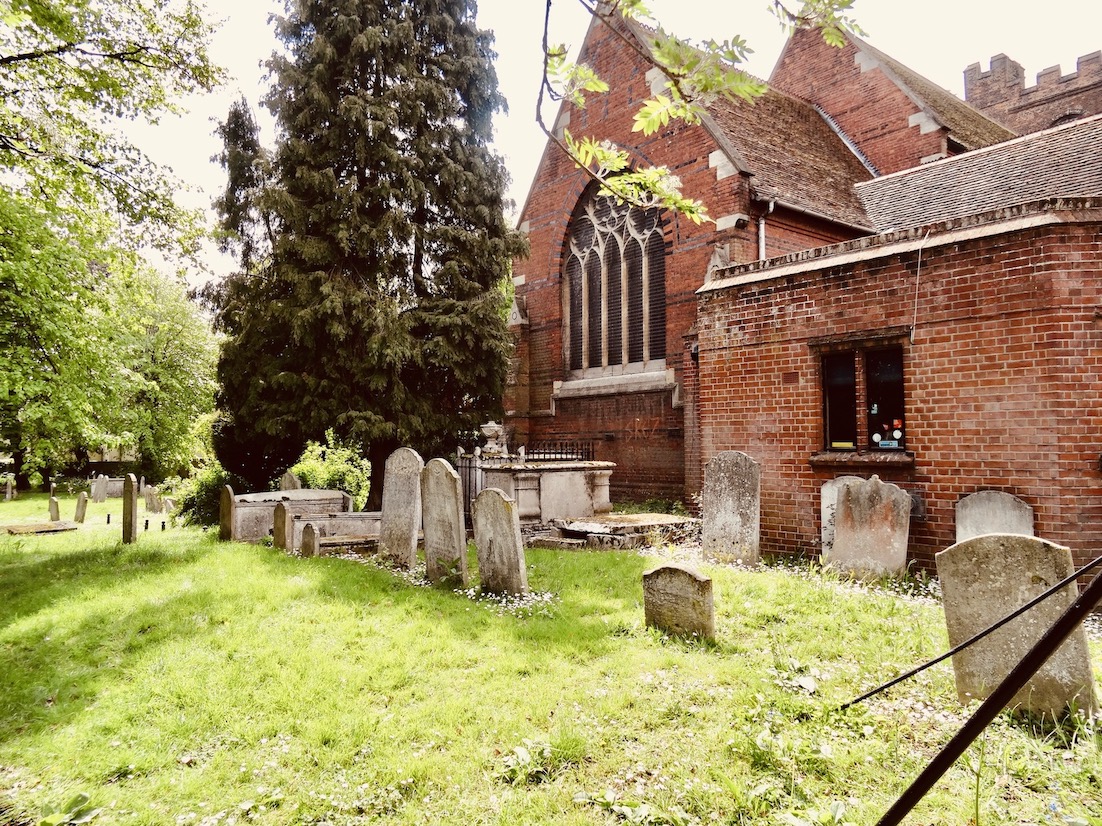 Colchester Arts Centre describes itself as “The little church with the big attitude!” and claims to have promoted the likes of Coldplay, Eddie Izzard and The Strokes before they became household names. On the day of my visit, I simply wandered into their box office and asked what was on. 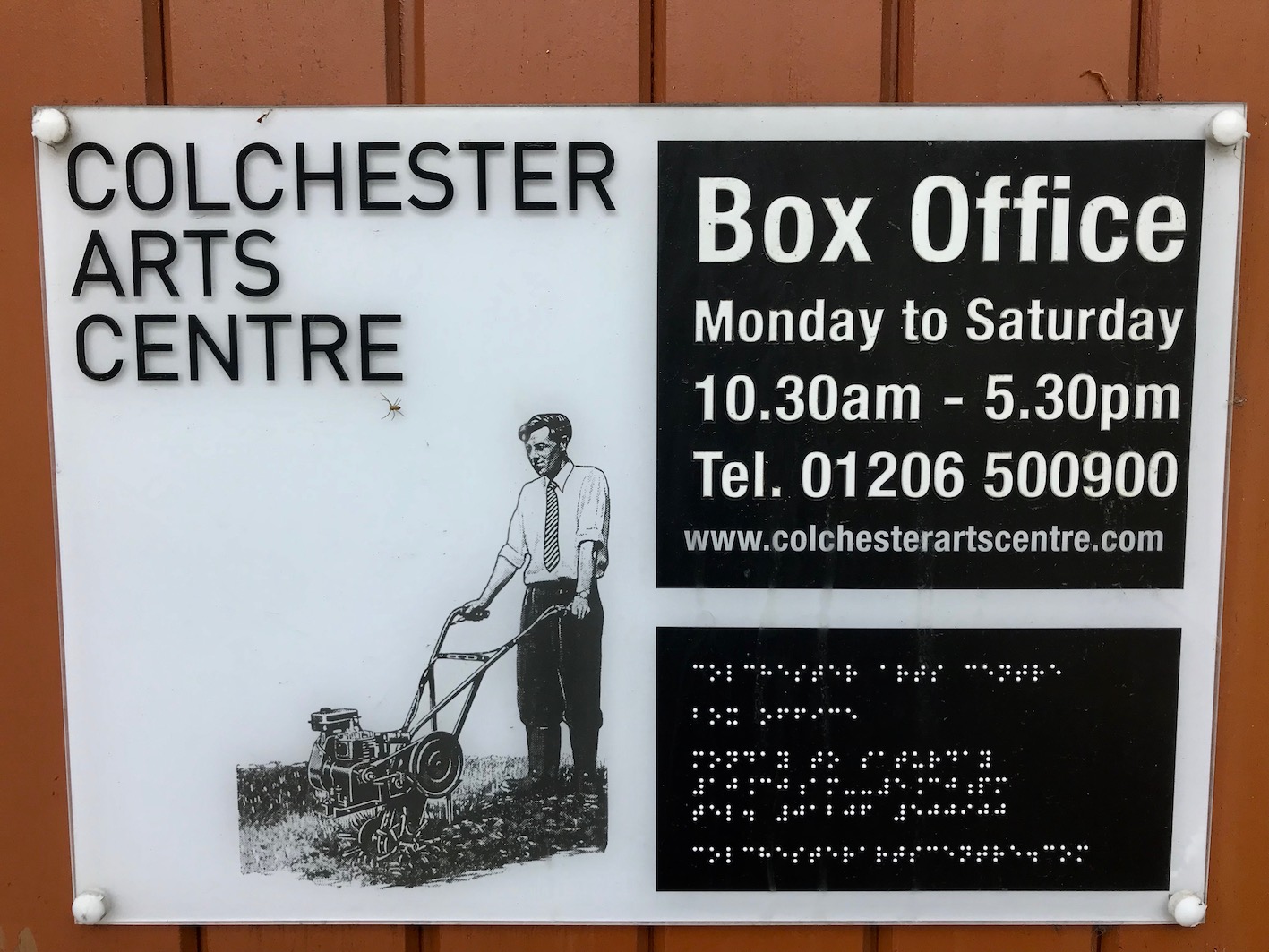 If I hadn’t promised to hang out with my nan that night, I would’ve been totally up for a screening of the cult 1971 horror movie Twins of Evil. At the time of writing the centre is closed due to the ongoing COVID-19 crisis. I really hope they get back on their feet soon. 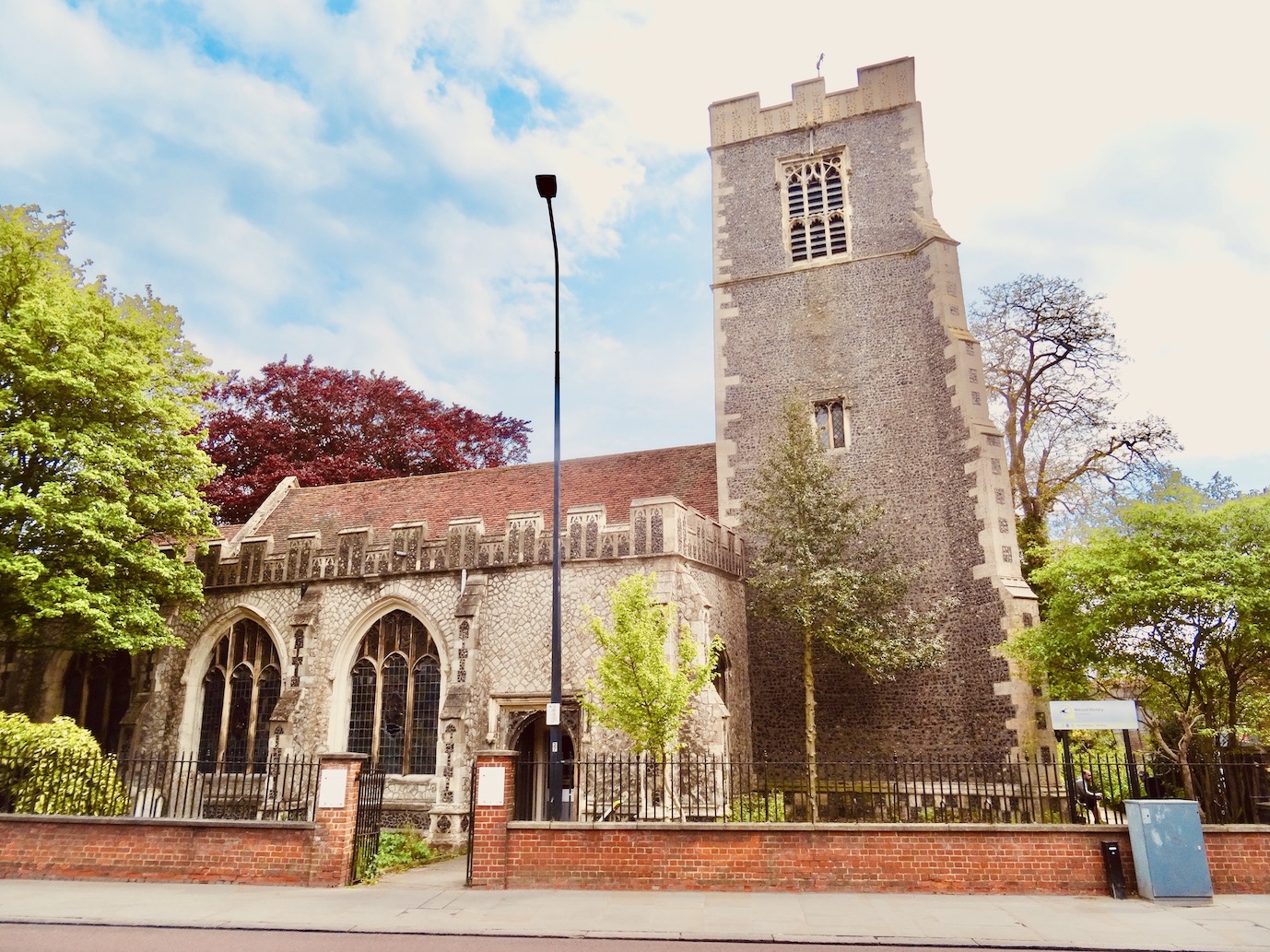 I’ve talked about how many of Colchester’s best sights are free in previous articles. If you’ve got the time and want to go all out, the town’s Natural History Museum is also worth a look. It’s another Colchester church conversion, this time from the Norman period All Saints Church. 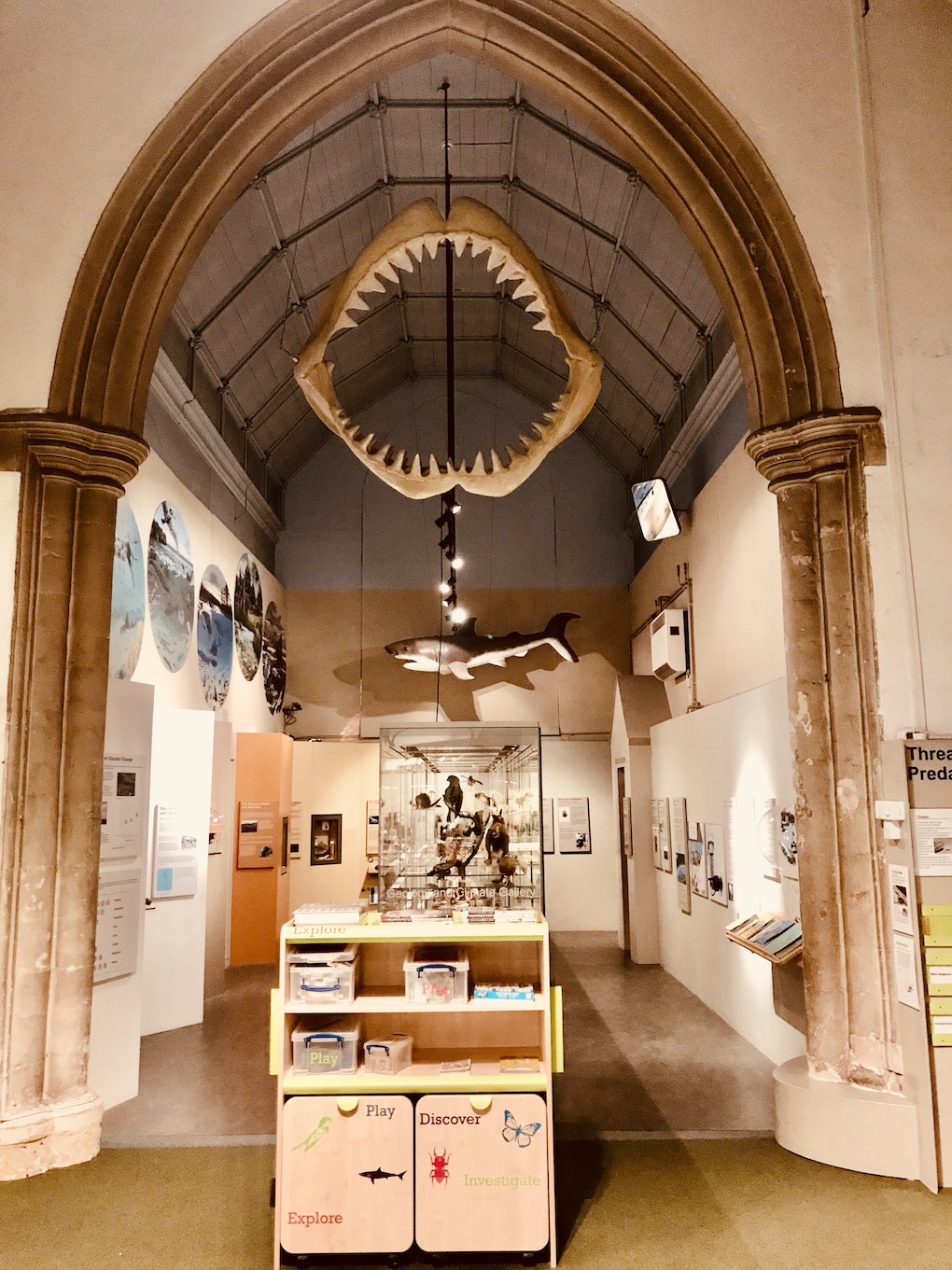 Colchester Natural History Museum focuses on the north east Essex area and has colourful, interactive exhibits that feel aimed mainly towards school groups. One can, if so inclined, stroke some stuffed animals, decorate your own flower pot and try crawling through a badger sett. I was too big to get all the way through, plus I got a few funny looks. #awkward 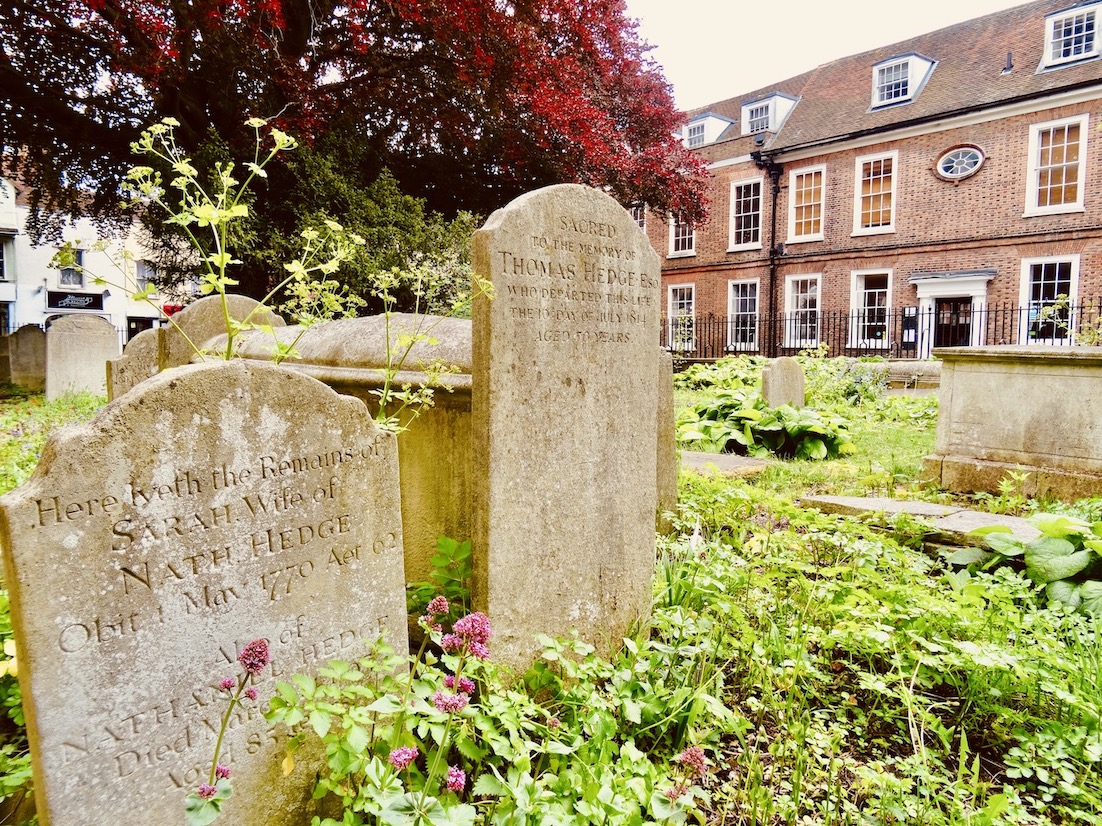 For me, the highlight was definitely the charming little churchyard, which is part historical cemetery, part conservation garden. Maintained by volunteers, they’ve gone for a somewhat wild jungle approach. Flowers and plants grow freely and the ivy has gone crazy, all over the brickwork of the museum. Apparently, it has no damaging effect and helps to protect the old joint from the elements!

Elsewhere, there’s a compost corner and a section of collected deadwood designed to help out the increasingly endangered Stag Beetle. By all accounts they deserve our help, because stag beetles eat rotting wood, returning minerals to the earth. What’s more, their larva is good for the garden and they don’t eat plants. Hooray!

For more on my adventures in this pretty English town, have a read of my other travel reports from Colchester.