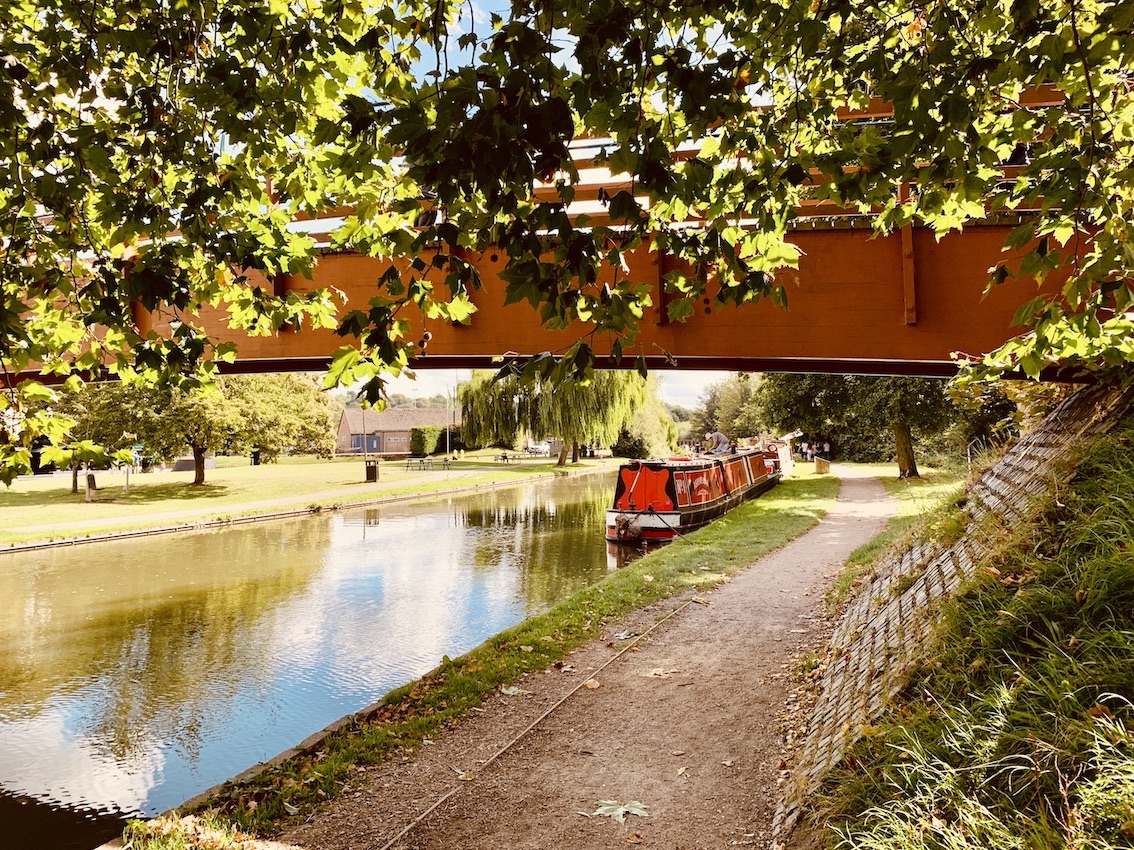 September 2019. I’d had an excellent couple of days retracing the steps of my youth around the Buckinghamshire towns of Chesham and Amersham. But now, on this pleasingly sunny autumnal morning, it was time to head back to London. I’d spent the night at my old friend Steppers’ place in Chesham. The plan had been for him to drop me at the train station after breakfast.

Until… that is… Steppers came up with quite the brainwave! With no particular rush to get back, he suggested we undertake the twelve minute drive to the town of Berkhamstead. There, a pretty section of England’s Grand Union Canal runs right through the town on its way to Hemel Hempstead. The walk wouldn’t take longer than thirty to forty minutes and I could jump on the train at Berkhamstead Station.

I have a confession to make. I’d only vaguely heard of The Grand Union Canal and had no idea that it spans an incredible 137 miles. Starting in London and finishing up at Birmingham, the stretch that runs through Berkhamstead is a small but gorgeous part of a mammoth network. 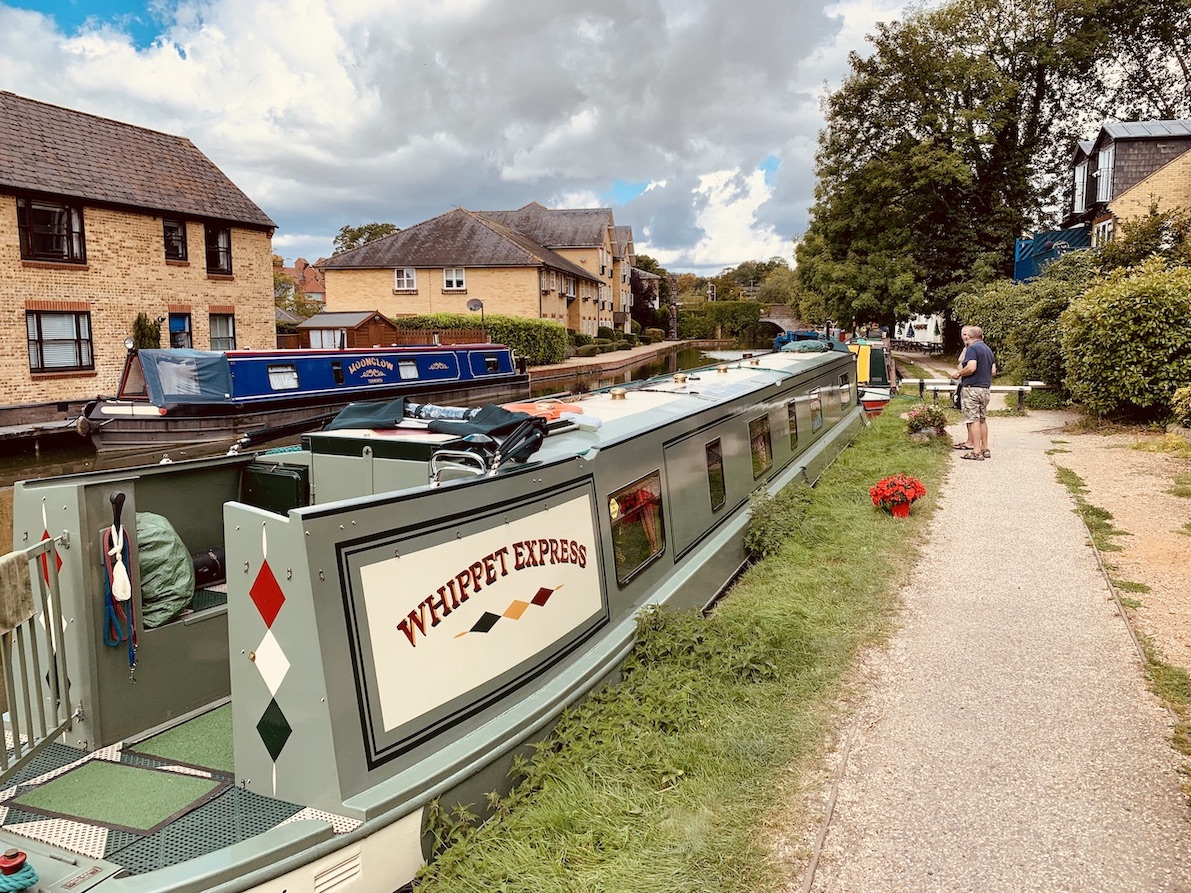 That morning Steppers and I jumped out of the car at Broadwater Lock, just across from the Waitrose supermarket. Within thirty seconds we were canalside, drinking in the peaceful vibe. The first houseboat I saw was a long, green vessel called Whippet Express. Utterly charming. 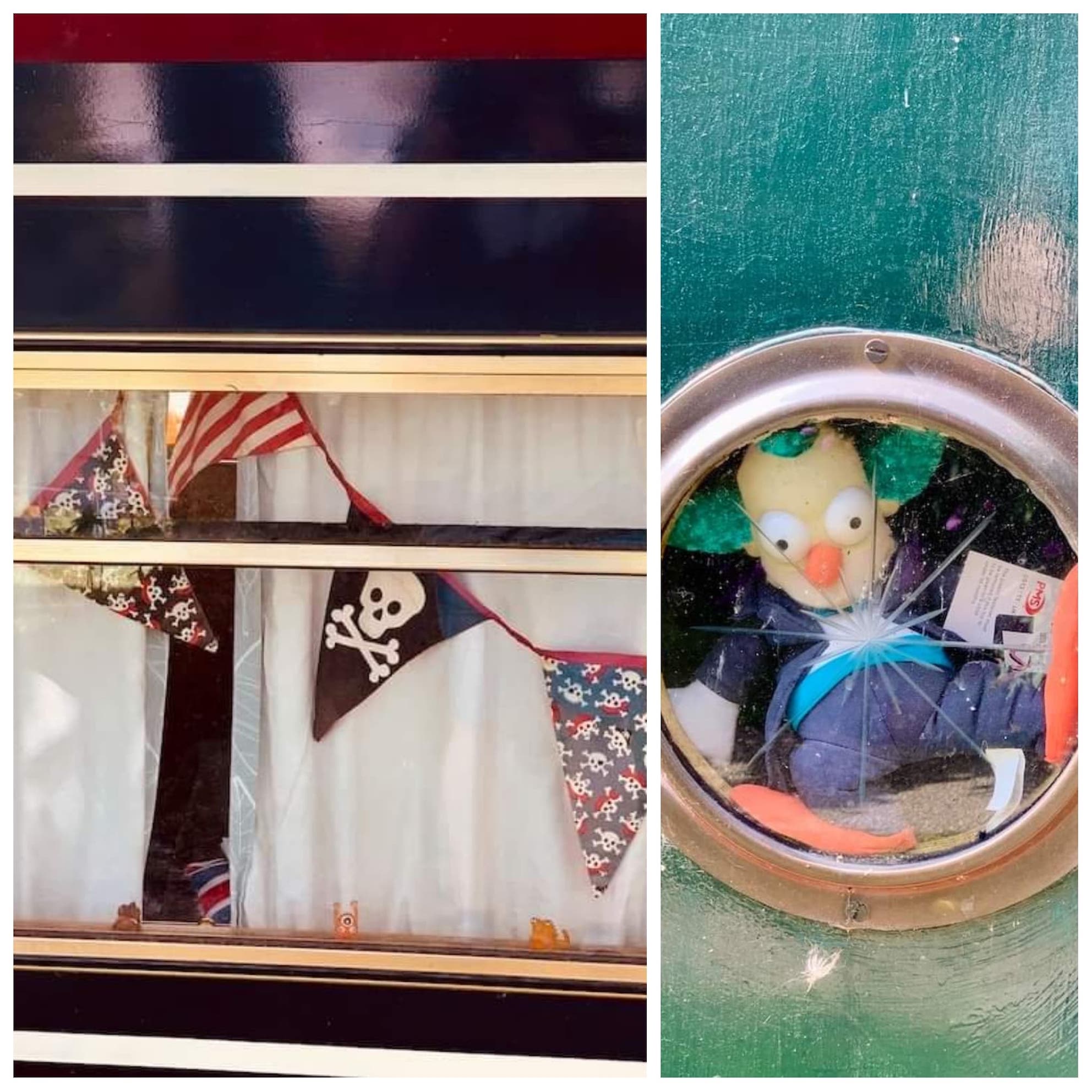 I’ve been fascinated with house boats since my Amsterdam days. In fact, I could totally envision having a writing studio here. Taking my morning coffee on deck before tapping away at articles down in the cabin.

Back in the real world, I had to make do with little glimpses through various portholes. There were football flags and Star Wars stickers, Union Jack cushions and… in one case… a squashed up Krusty the Clown doll. Why not. 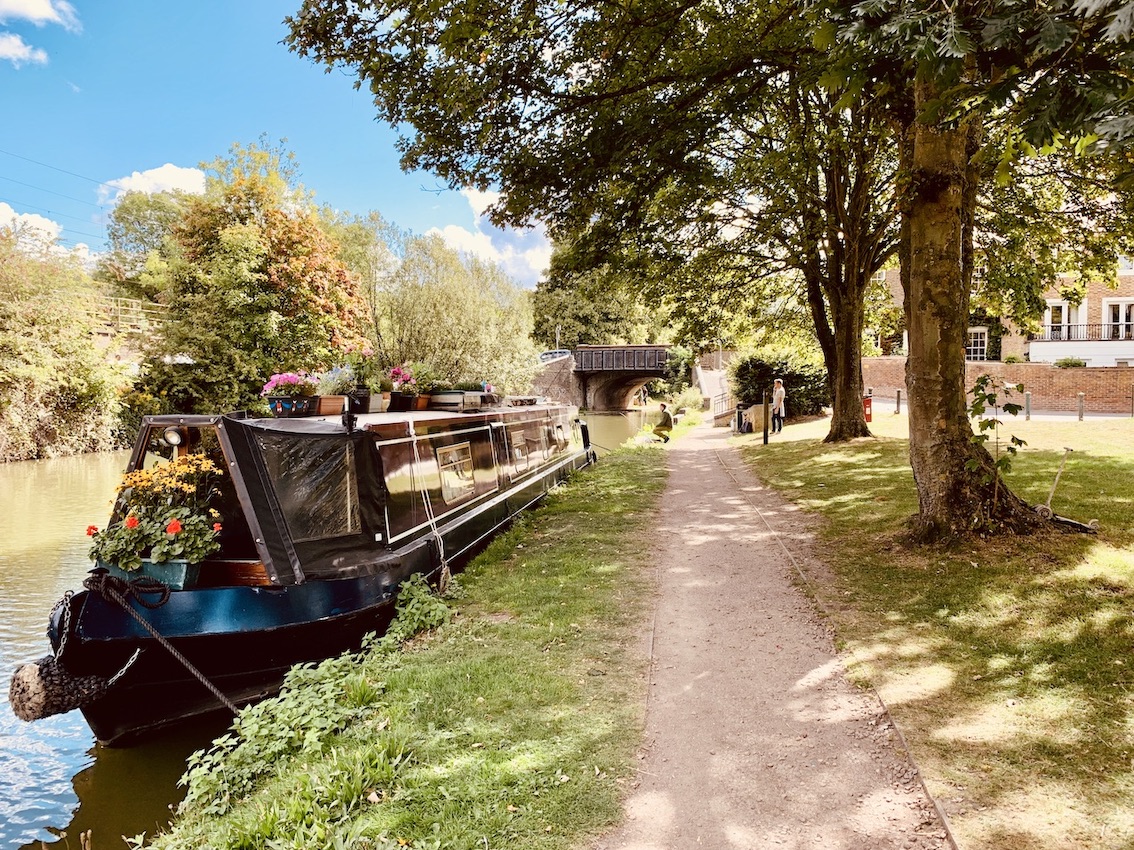 Berkhamstead’s section of England’s grand waterway dates back to around 1798 when construction linked the town up with The River Thames at Brentford. Back in the 18th century the cheapest way you could transport stuff was by boat. Hence Berkhamstead flourished during this period as a busy boat-building yard. 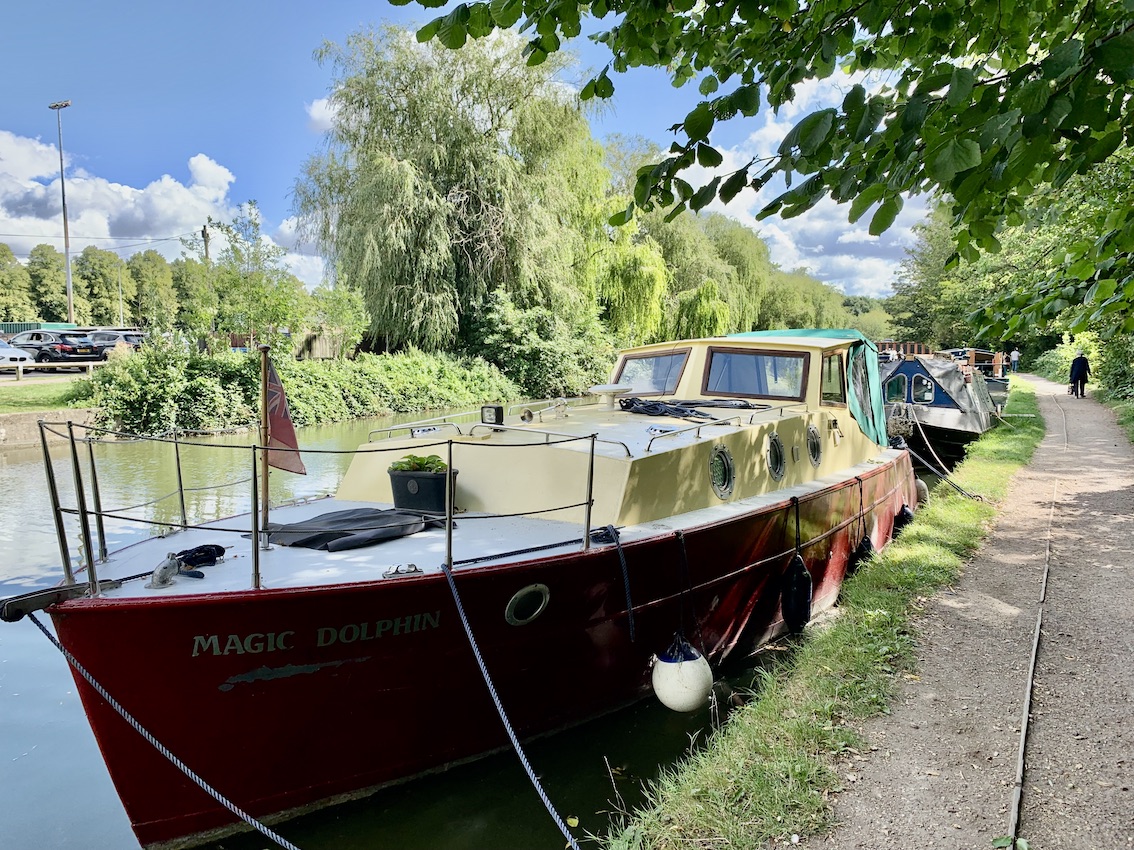 Moreover, the canal played a key role in supporting the needs of a local brewery, chemical works and timber yards. It really was the main show in town, until the arrival of the Iron Road railway lines. Nevertheless, Berkhamstead’s stretch of canal remained reasonably active in the local industries until the early 1960s.

What to See and Do, Berkhamstead. 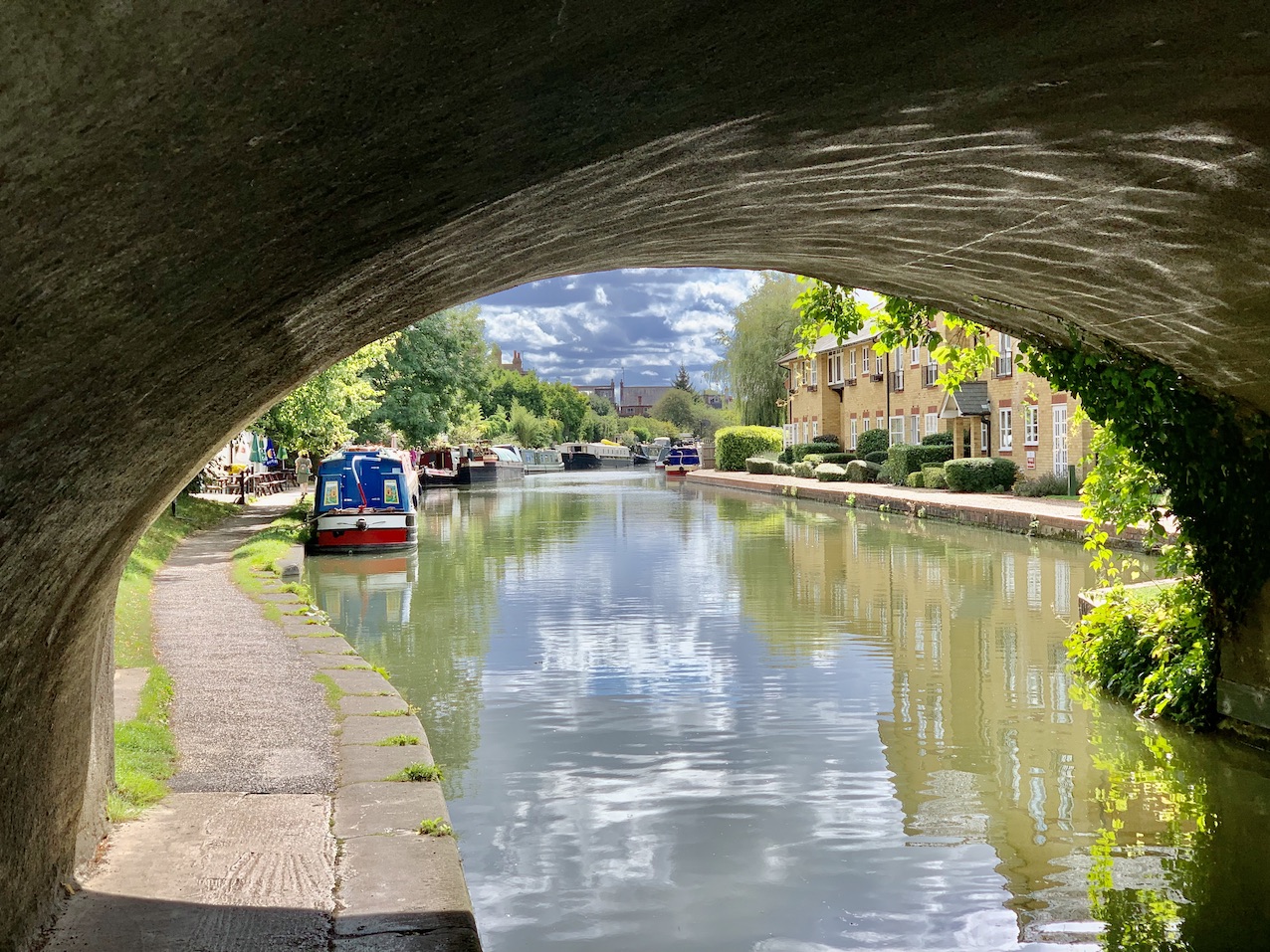 Today the canal stands as a testament to a bygone era. There are beautiful bridges, handsome townhouses, chipped stone steps and three of The Grand Union’s 158 locks.

As we walked, Steppers and I passed plenty of fisherman wiling away the afternoon with their neatly arranged equipment and home-made sandwiches. 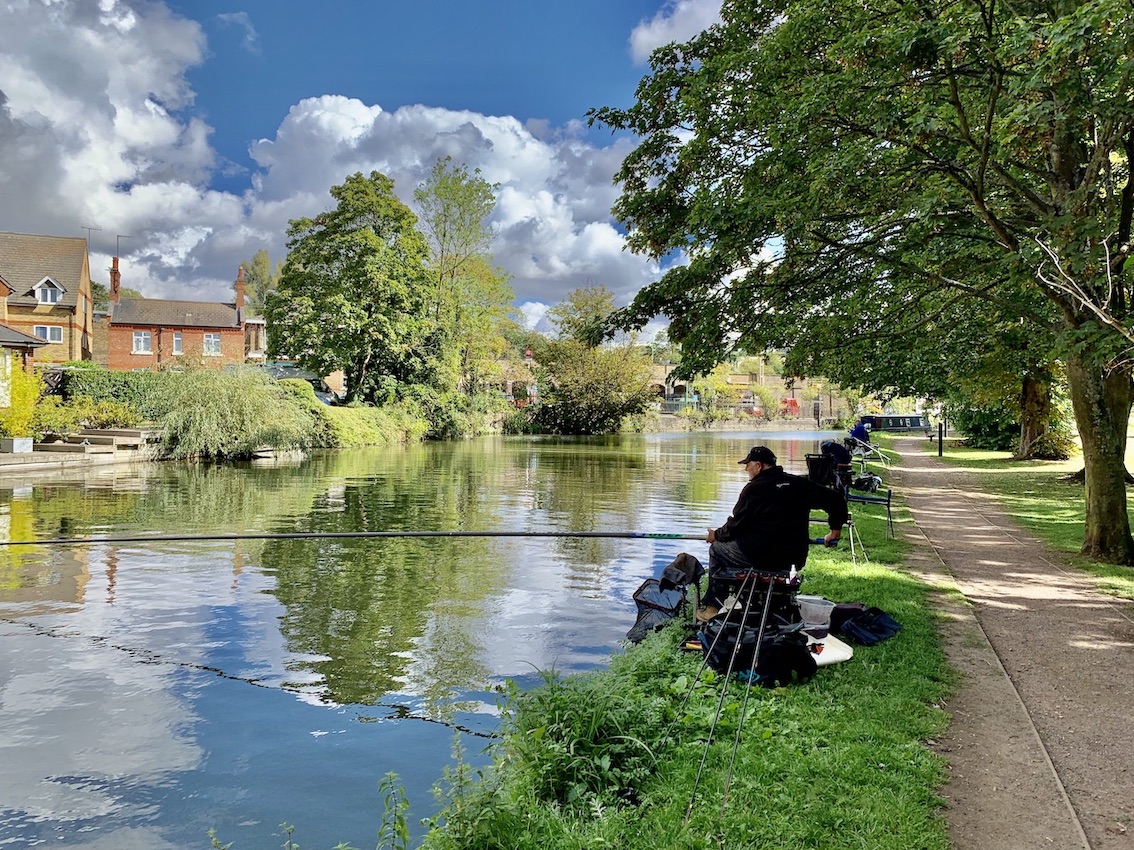 A Sunday morning in Berkhamstead.

We passed couples, dog walkers, smokers, a jogger or two and a woman sat on a wooden bench engrossed in a Monica Dickens biography. Everyone was relaxed and blissfully unaware of the impending arrival of COVID. 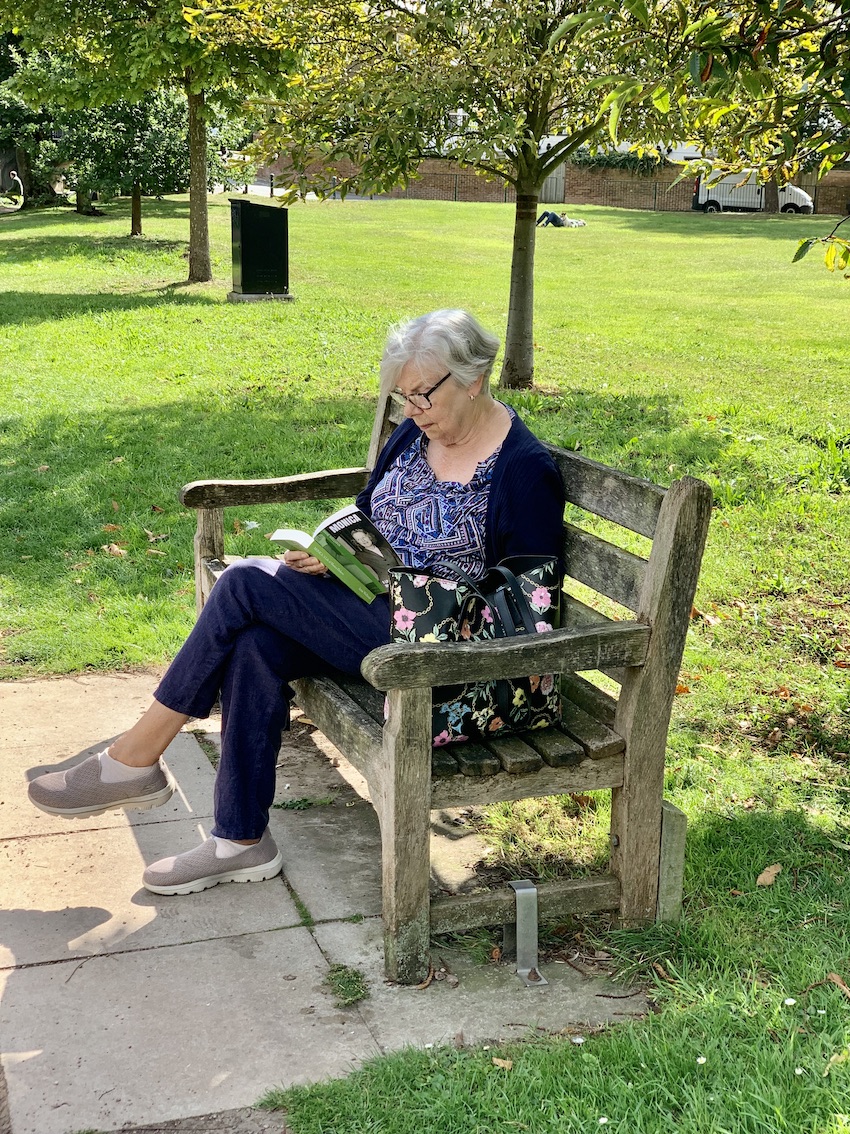 It’s also a great opportunity for engaging in a bit of property envy. There are swanky apartment blocks overlooking the canal and immaculate brick, chimney-laden cottages. 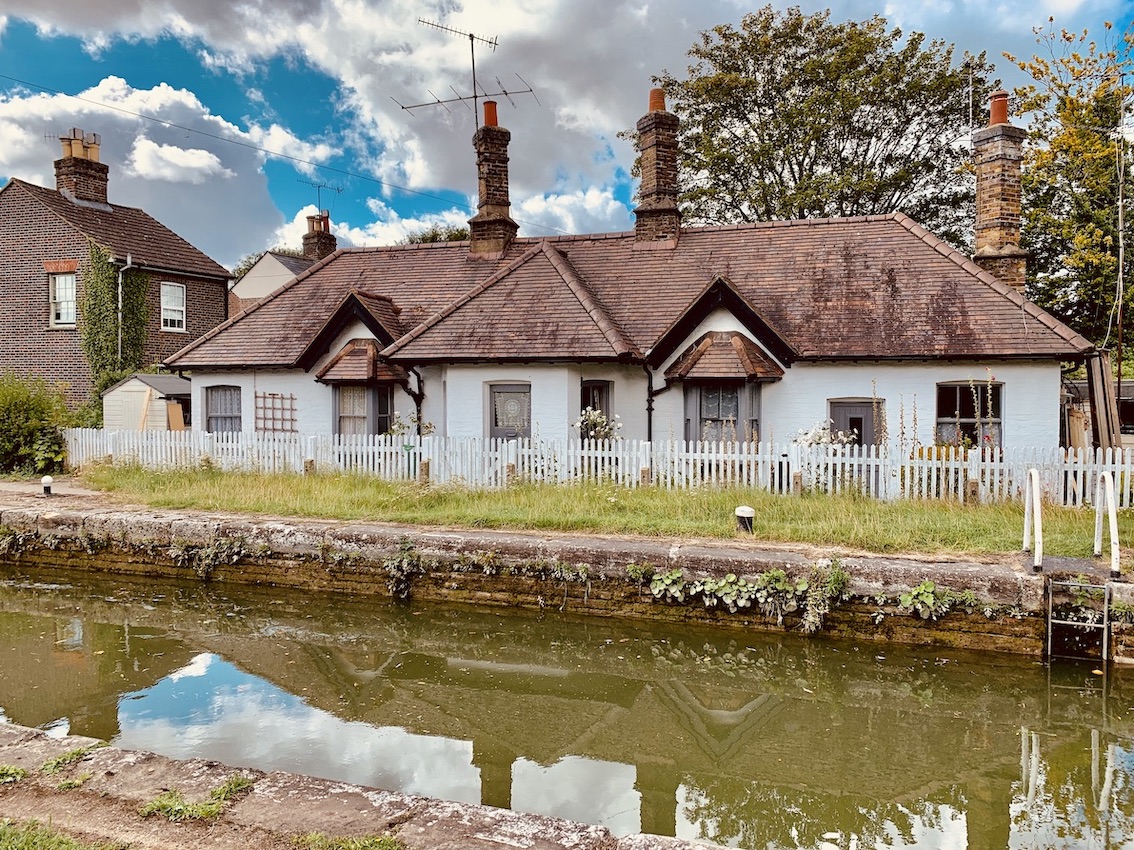 My favourite was the amazing building pictured below. At first glance I thought it might be a cafe, or perhaps a florist. But actually this is someone’s home. The owner caught me taking a photo, thus she proceeded to wave from the balcony. 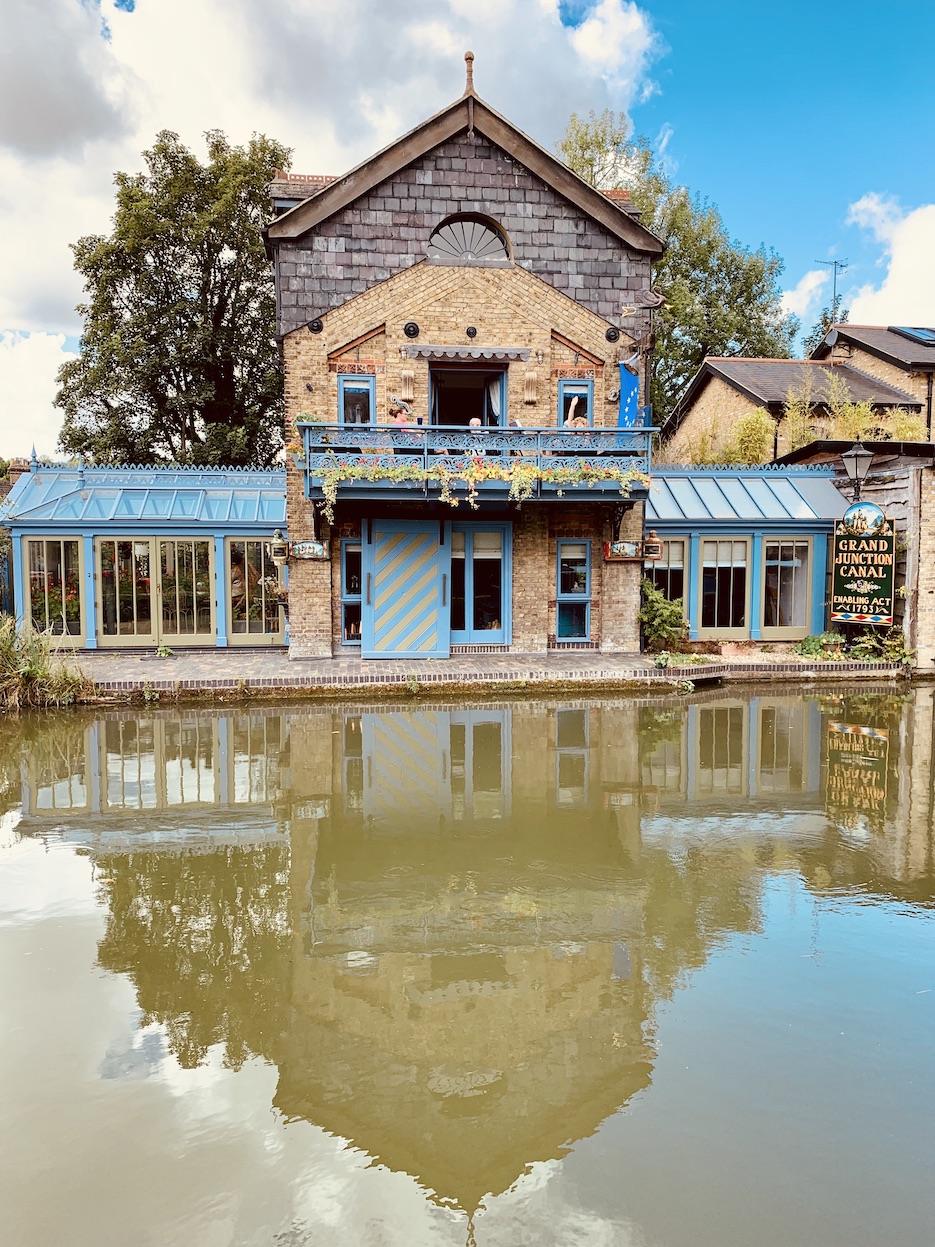 Note the sign to the right of the ground floor greenhouse. It references The 1793 Grand Junction Enabling Act, from which parliament authorised construction of the canal line at a cost of around £600.000. 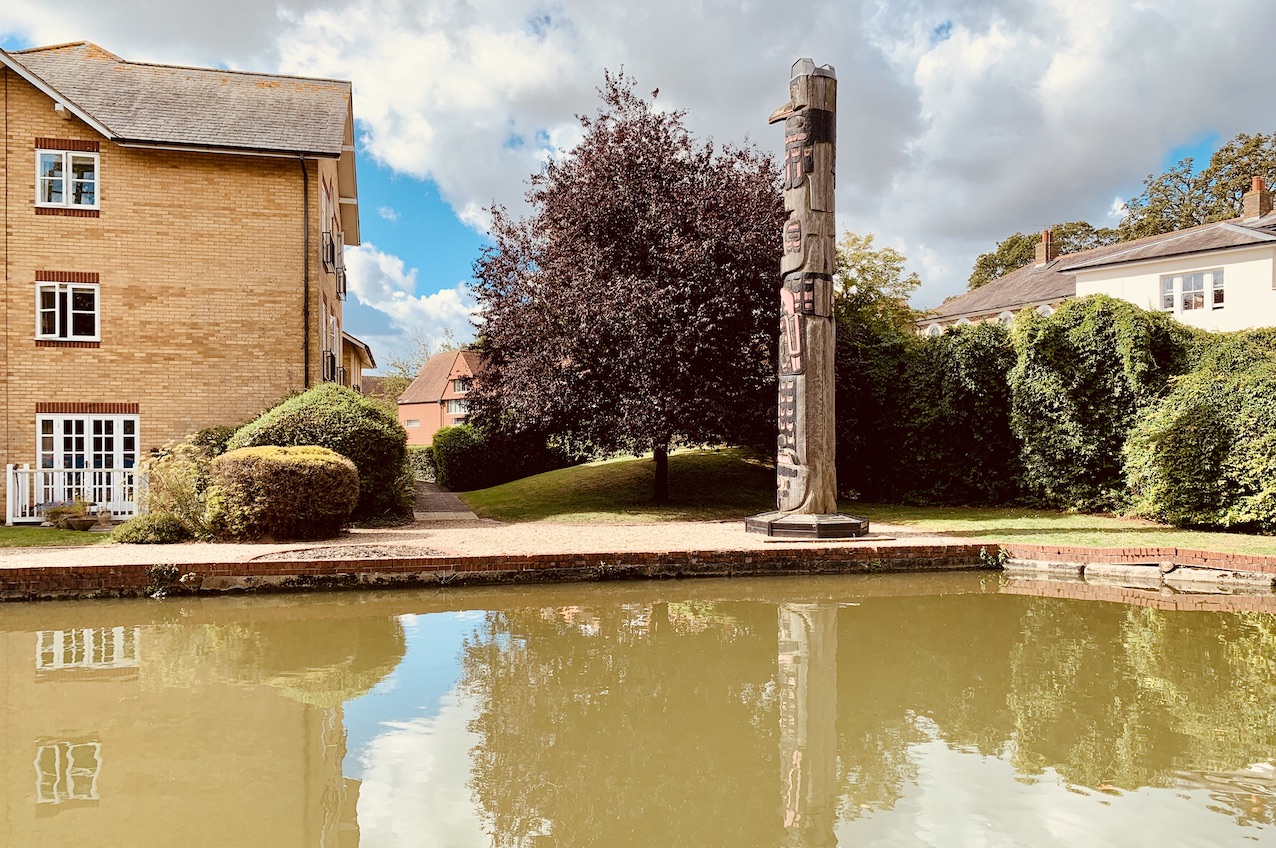 The purchase came about after William’s brother Roger visited Canada, where he received great kindness and hospitality from a Kwakiutl tribe on Vancouver Island. 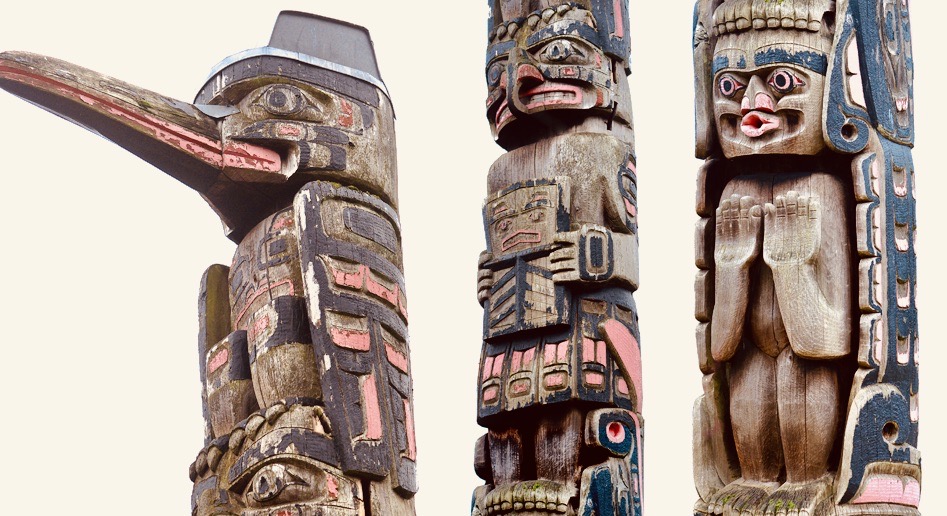 William was so touched he asked Canadian Nations artist Henry Hunt to make the thirty foot pole. He then had it shipped to Britain and installed on the site of the family timber yard.

And here it stands today in the garden of Alsford Wharf Apartments. The pole, one of only five in Britain, is a symbol of fertility and includes a carving of a raven, the so-called bringer of first light. 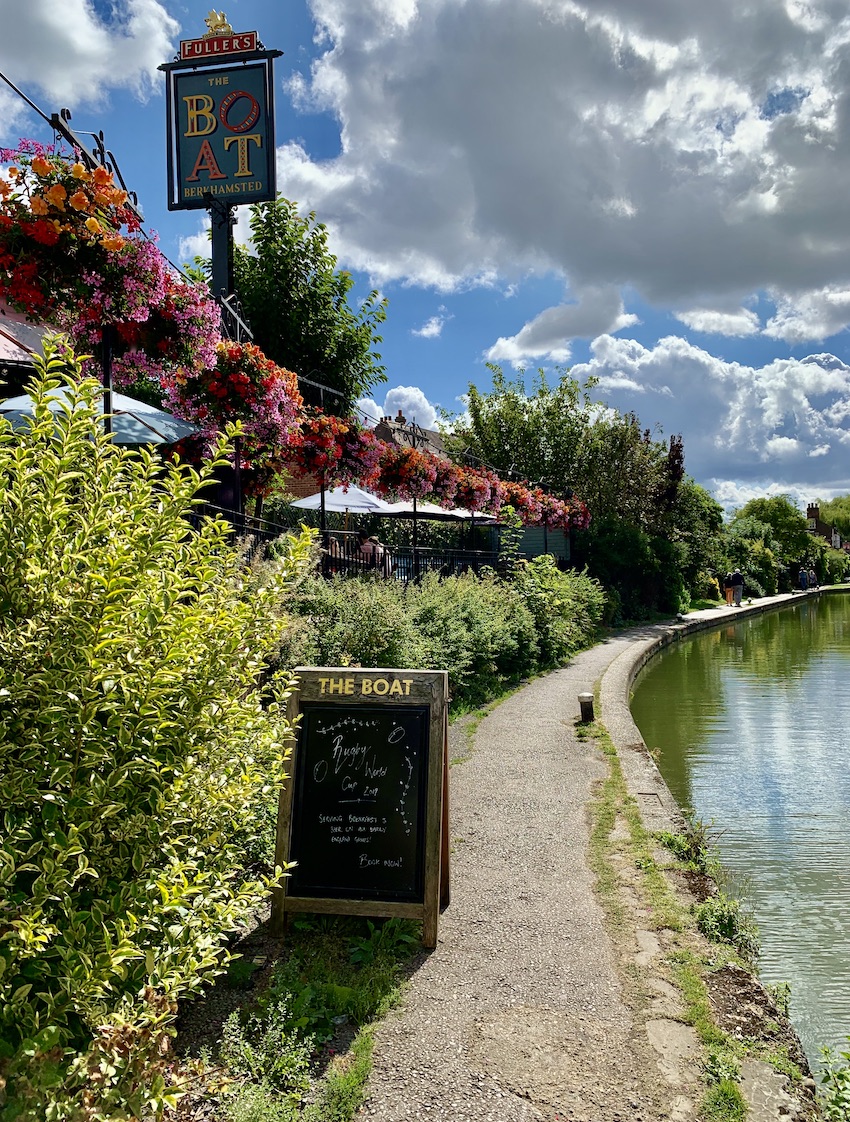 Naturally, there are some lovely places for a drink and a bite. One good option is The Boat Pub, a traditional watering hole with craft ales, lager on tap and contemporary British cuisine. 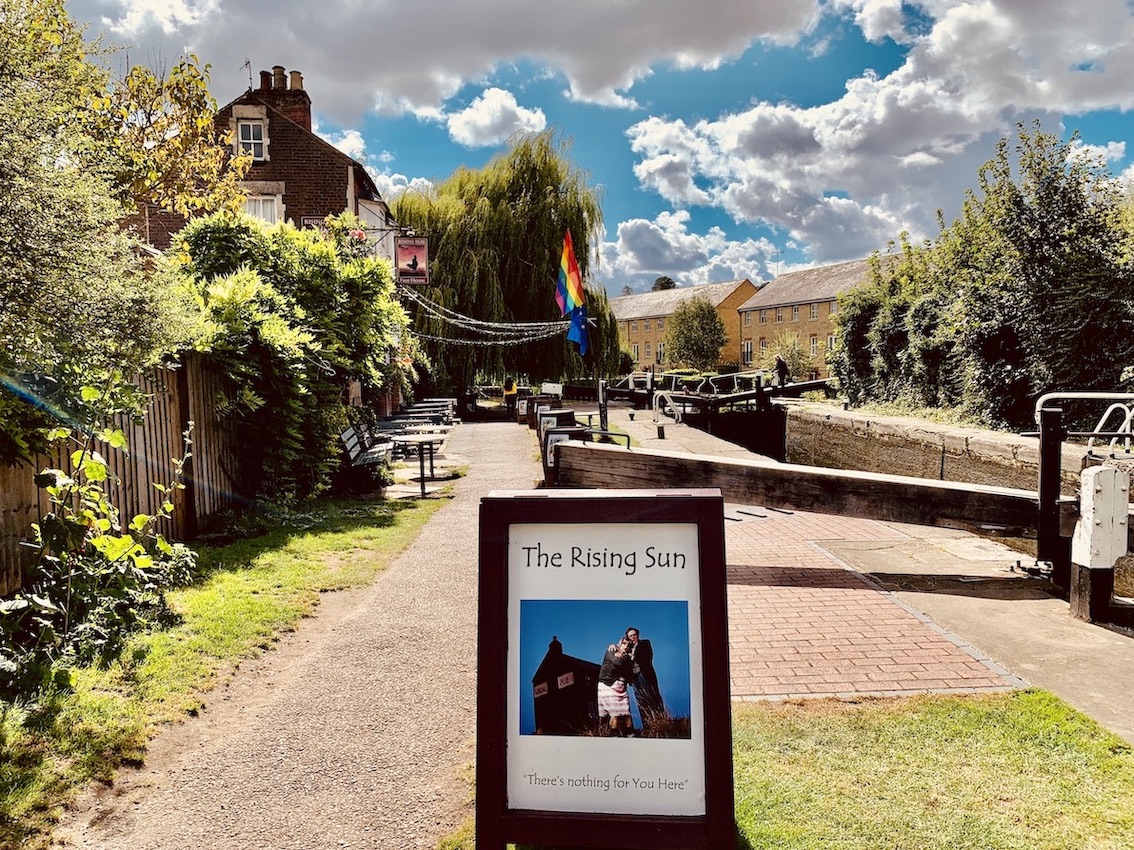 Alternatively, how about The Rising Sun, a free house that describes itself as “like pubs used to be, but better!” In addition to award winning cider, cooked breakfasts and ploughman’s sandwiches, they host quiz nights, board game evenings and a charity book club. 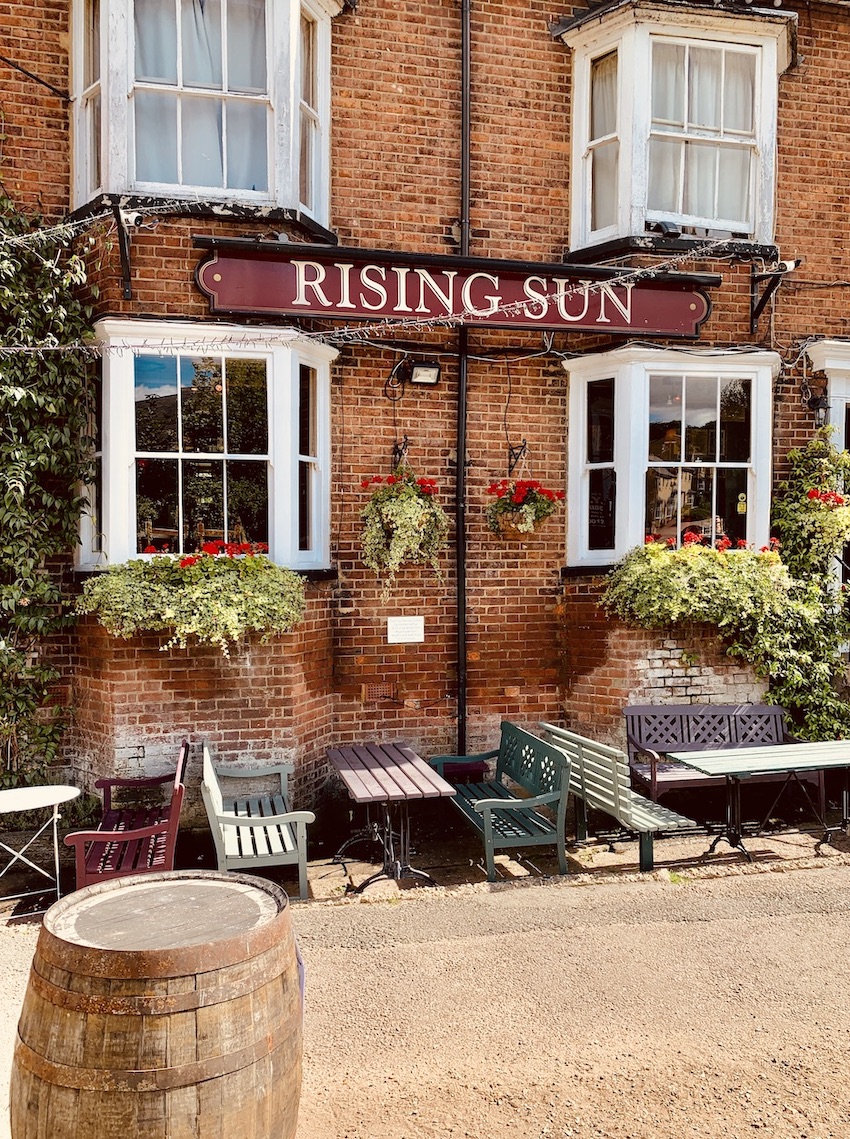 “There was a house… in Berkhamstead. They called it….”

Finally, it was time for us to cut back into town. We took the bridge on the aptly named Little Bridge Road, which leads to George Street and the car park.

As we went, I thought what a great introduction this had been to The Grand Union Canal. Hopefully, I’ll add a few more sections over the coming years. 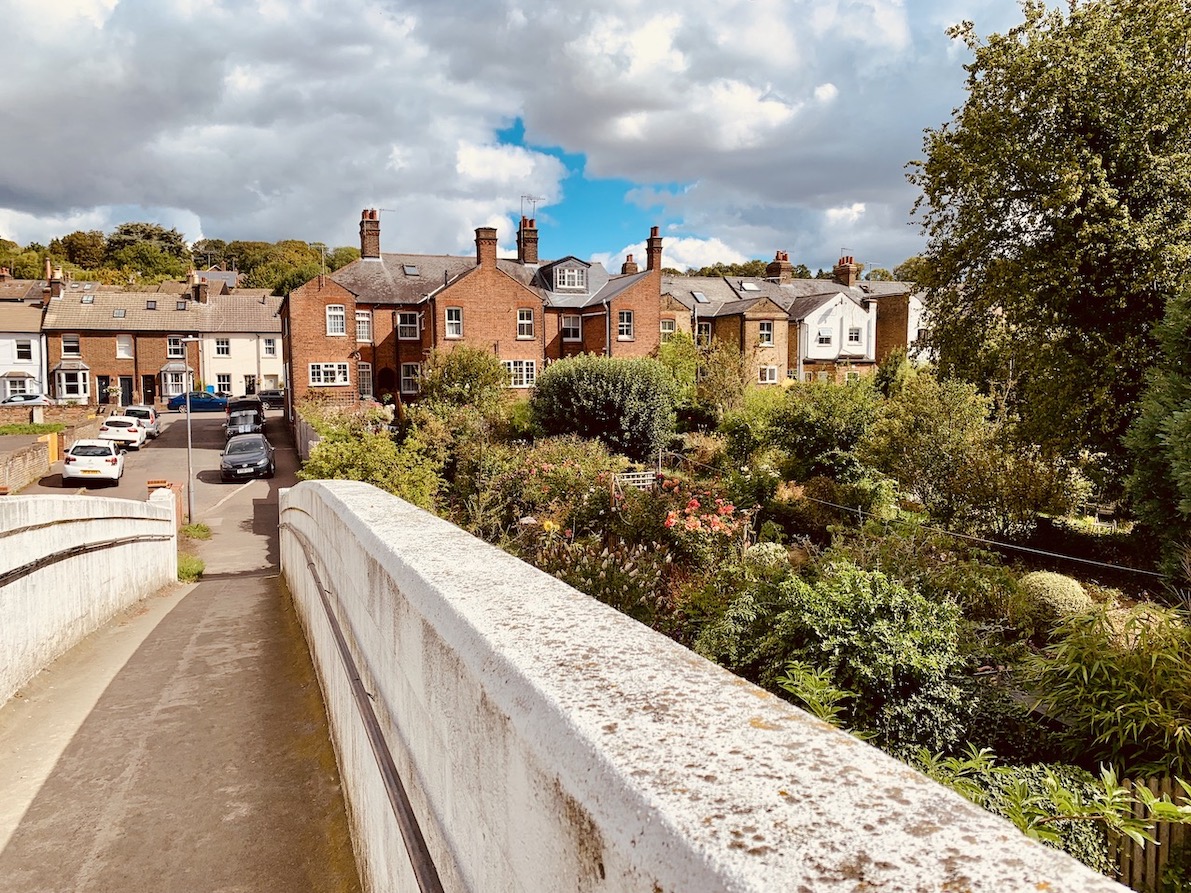 For more on the region, take a look at my travel articles from around Buckinghamshire.

Want to go further afield? I’ve written tonnes of articles from across England and Scotland.