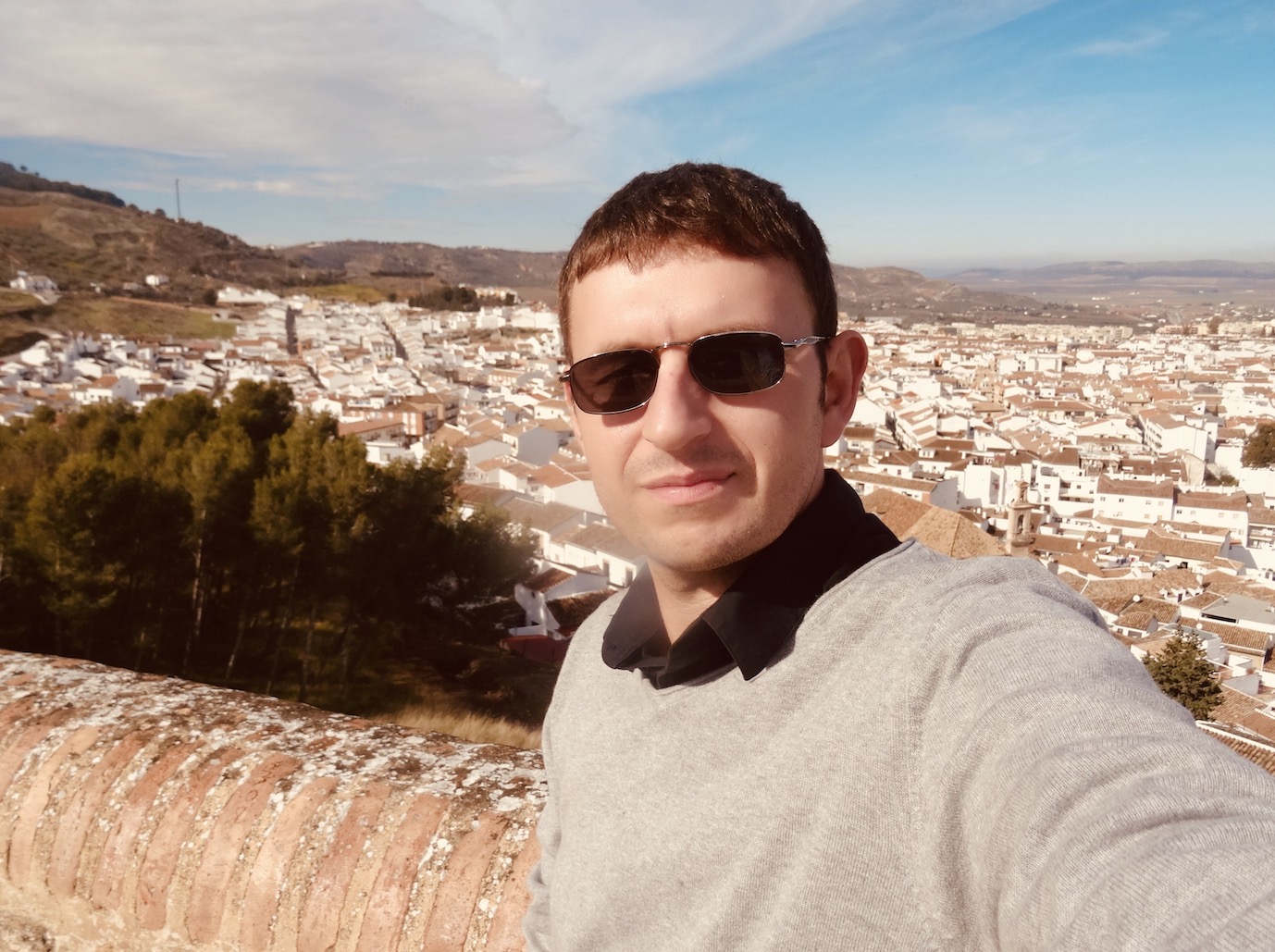 January 2017. It was pitch black in Malaga when I boarded the bus to Antequera. In fact, the first traces of light didn’t begin creeping into view until I was three quarters of the way towards my destination.

I’d woken up at an ungodly hour due to the ridiculously early mid afternoon departure of the last bus back. Indeed I was audibly snoozing when we rolled to a standstill and the indiscreet bus driver bellowed:

Gingerly stepping off the bus, I was literally just a dozen steps from the pretty Corazón de María Garden. Thus I strolled in and settled on a bench to allow myself to wake up. All the while, slanting beams of the day’s sunrise flickered through the branches of the trees. 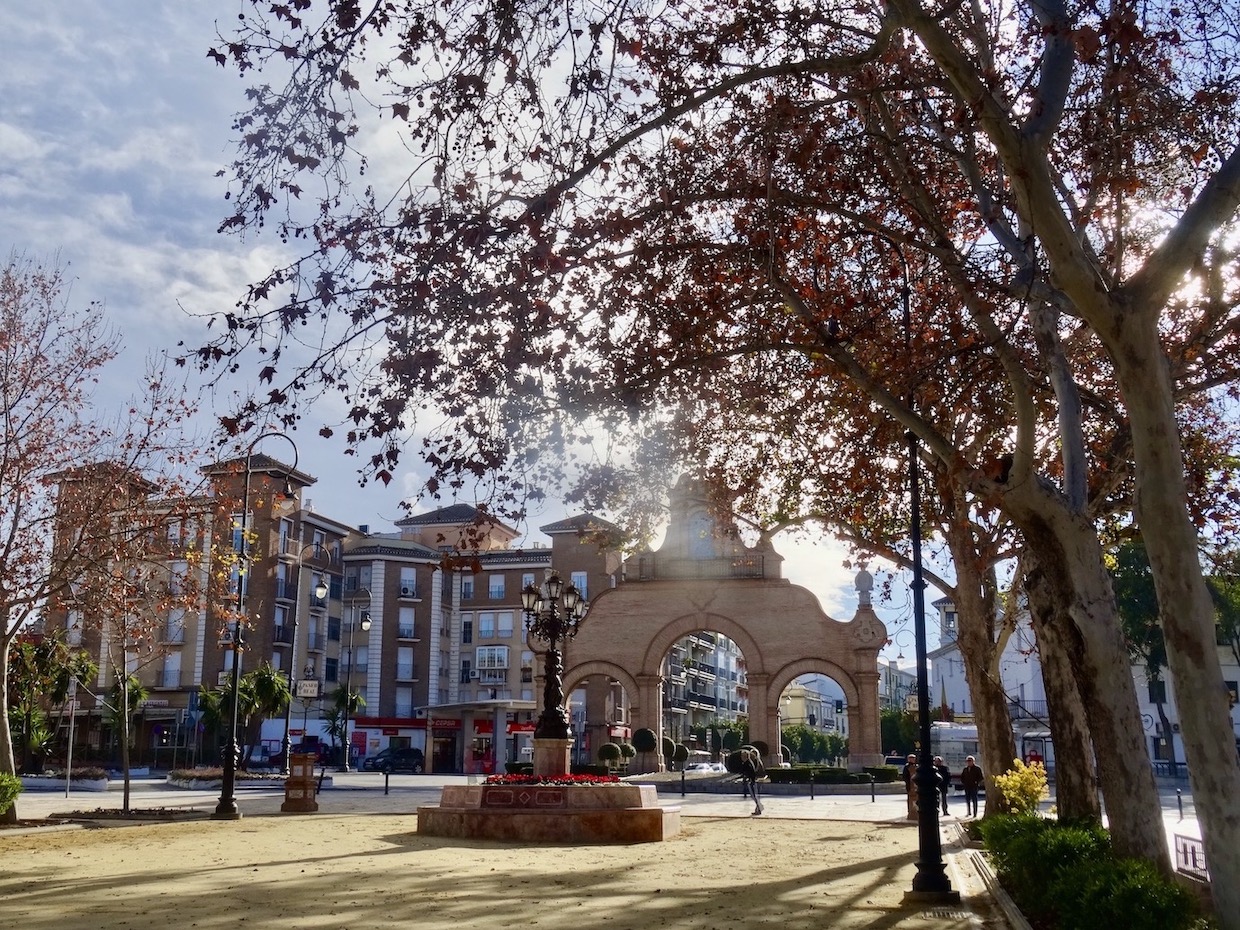 Affectionately dubbed The Florence of Andalusia, Antequera had intrigued me the moment I began reading about it.

Here, I discovered, was one of Southern Spain’s most beautiful and historical cities. And yet, between the monster sights of Córdoba, Granada and Seville, it’s a place that often gets lost in the mix. 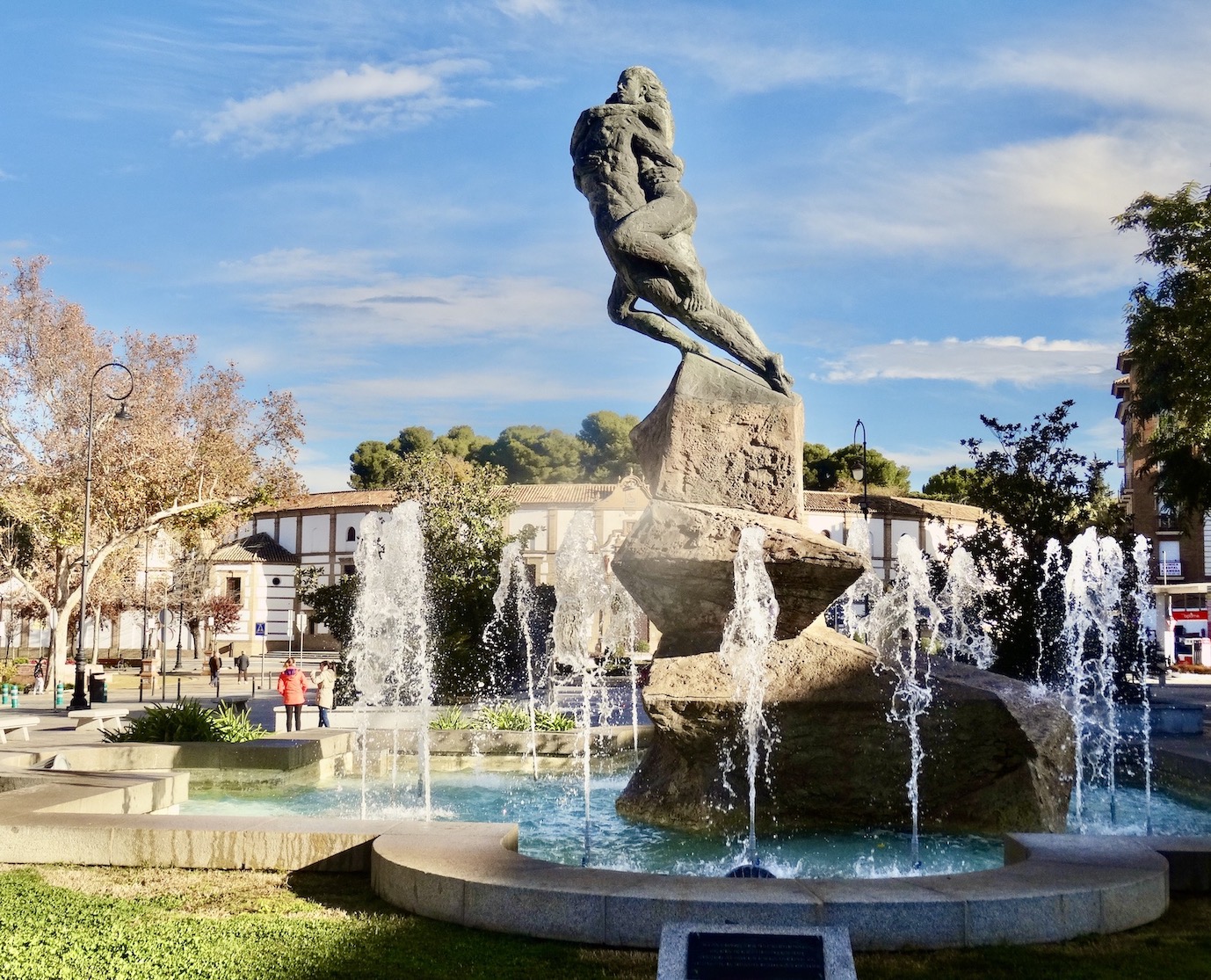 The Lovers of La Peña Statue.

From my bench, I could see the elegant Lovers of La Peña Statue. It stands in tribute to a fourteenth century legend of forbidden love. Tazgona was a beautiful Moorish princess who fell in love with a Christian soldier called Tello, who’d been imprisoned by her father.

King Ibrahim was furious when he found out about their secret relationship. After all she was royalty, he a commoner. His daughter an Arab, the soldier a Christian. It simply wouldn’t do.

“Since love was to be impossible, as one in a strong embrace,

the lovers threw themselves from atop the rock”.

Having been sentenced to death, Tello managed to escape prison and flee with the princess. The legend has them running through the countryside, pursued by The King’s men.

The chase took them up a giant rock, where they were finally cornered. Rather than give in, they threw themselves off the rock in a suicide pact. Today locals call the mountain Lover’s Rock. 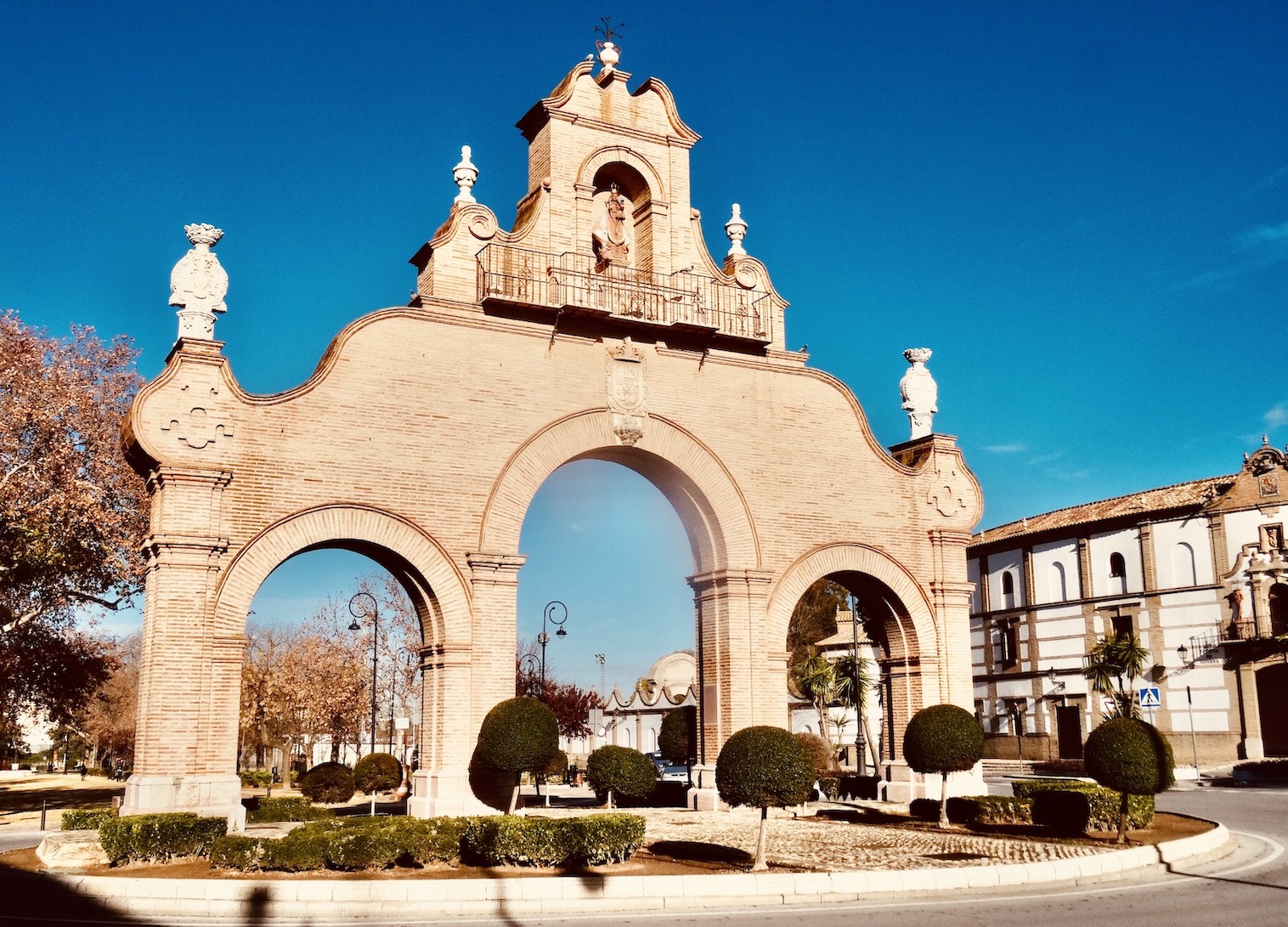 Taking in the sweeping views over Lover’s Rock from the top of Antequera Fortress is a highlight of any visit. Hence I set off through the park and into the old town, passing through Estepa Gate. This handsome brick and red stone archway dates back to 1749 and was once part of the city walls.

Sadly, local authorities destroyed the gate in 1931 so that cars could pass through! In 1988 they reconstructed it based on the original design, incorporating the gate into a roundabout to avoid traffic problems. If only they’d thought of that in 1931! 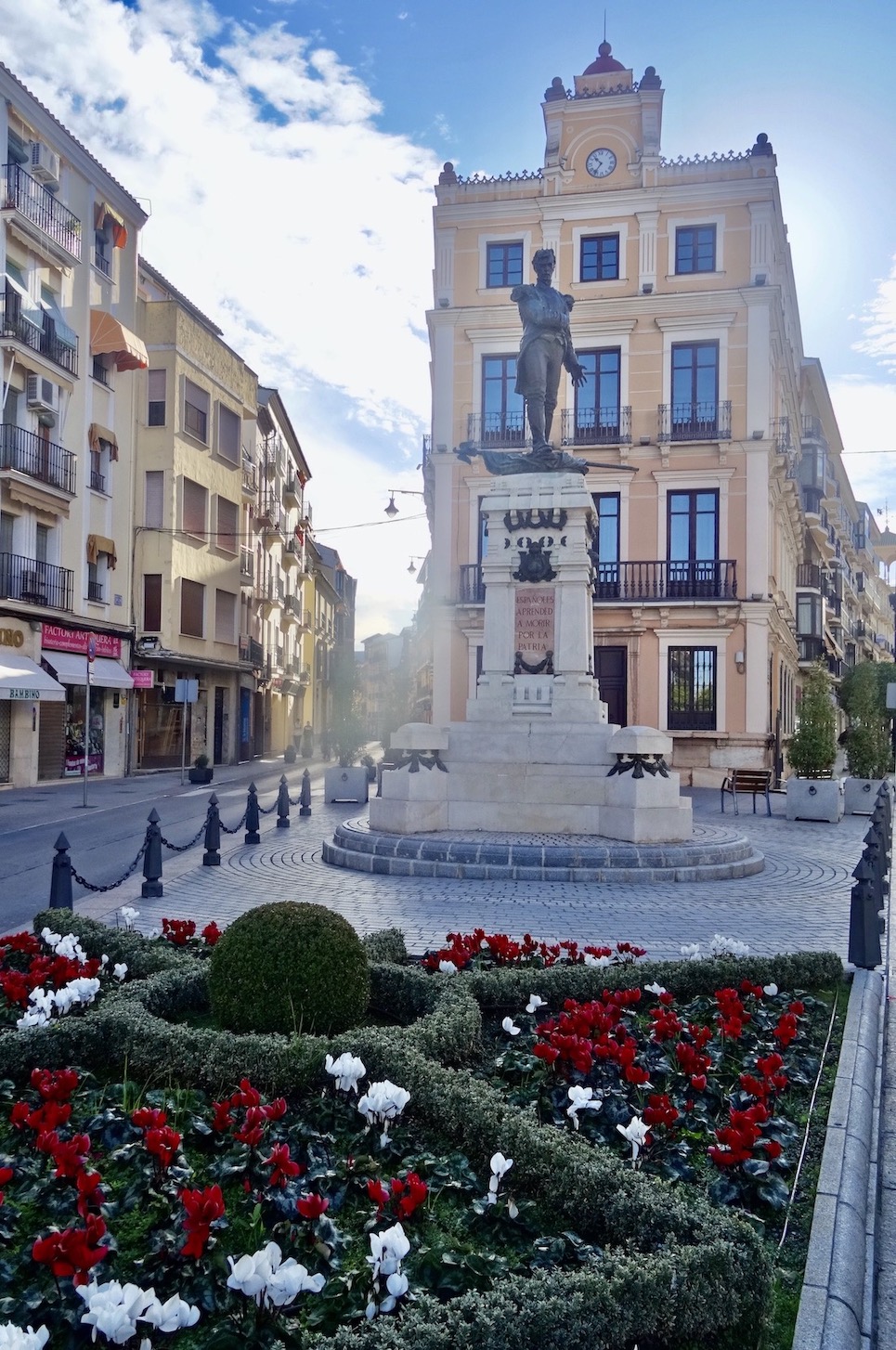 Architecturally, Antequera is a gorgeous mix of Roman, Moorish, 17th century Mannerism and 18th century Baroque, to name just a few styles. It was especially lovely so early that morning, with the streets largely empty and all but a few shops shuttered up.

In Spain, people also call Antequera The City of Churches. This is due to the fact that, despite its small size and population of around forty thousand people, Antequera is home to no less than thirty churches. Yup, that’s more per resident than anywhere else in Spain. 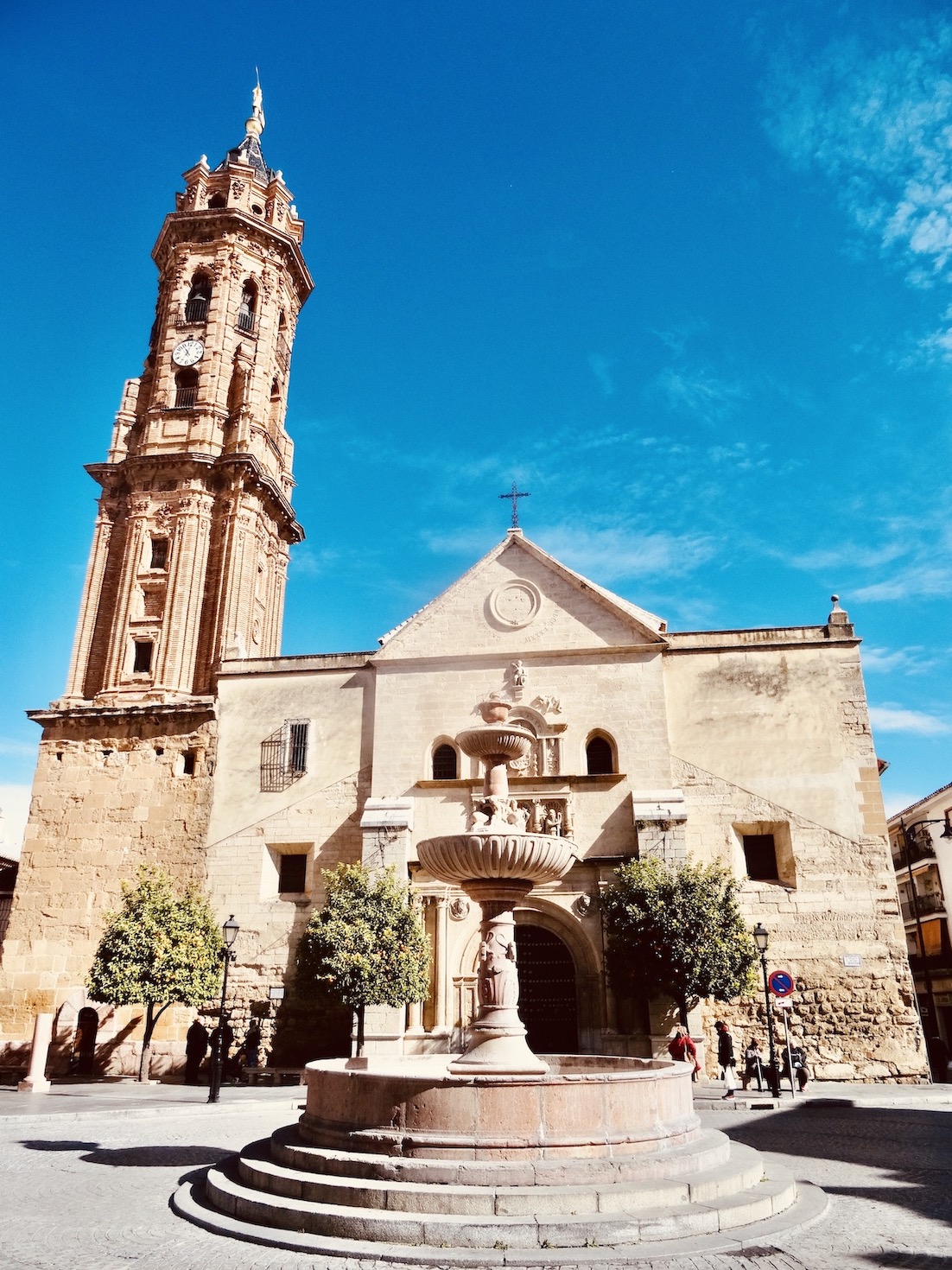 That morning, as I explored the old town, several were already open, including San Sebastián Church. Built in 1548 upon a design by Diego de Guevara, its dramatic renaissance facade dominates the pretty San Sebastián Square. Its rugged stone tower, sixty metres tall, is one of Antequera’s most iconic landmarks. 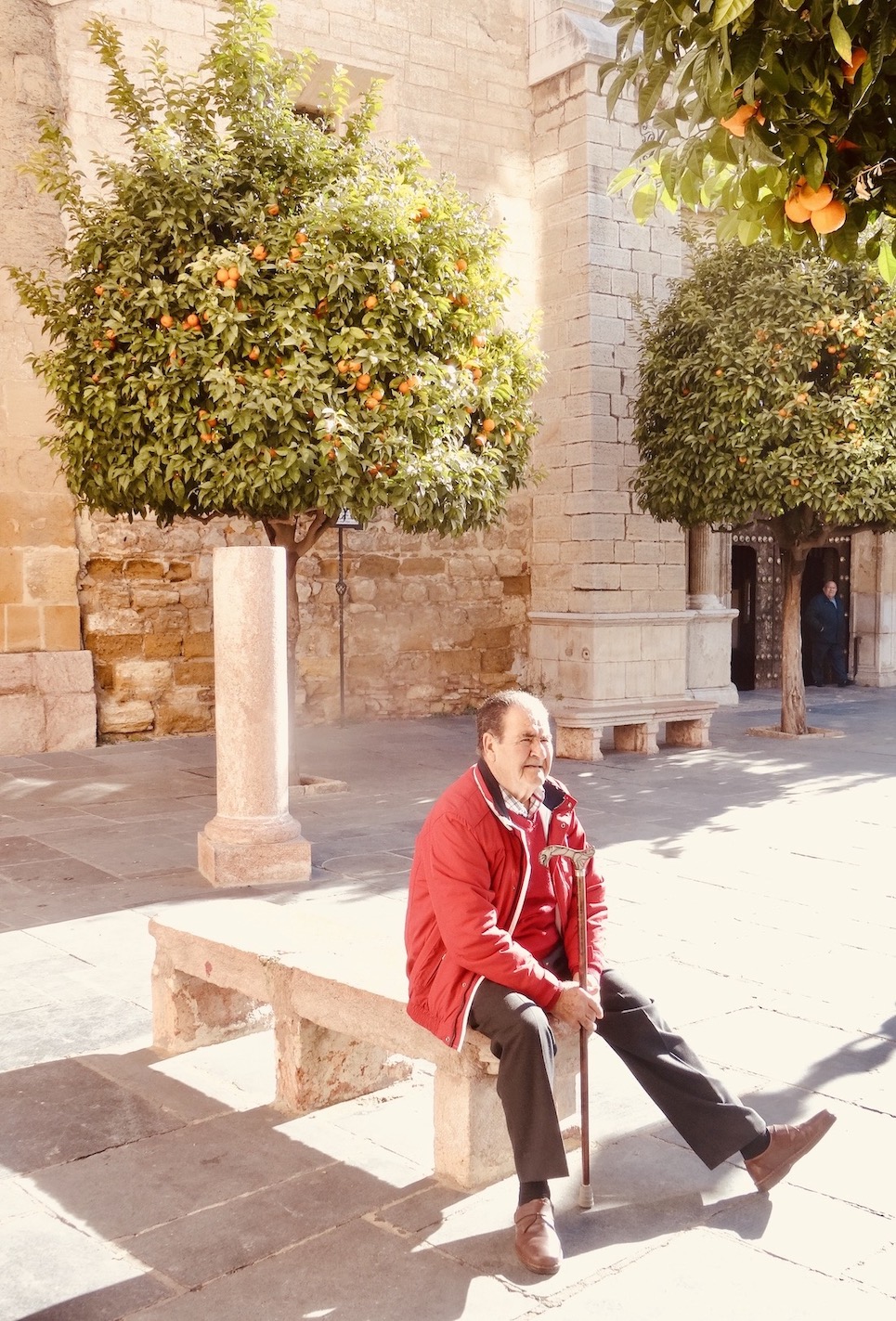 Outside the church, I was pleased to see that Antequera more than holds its own in the sittin’ doin’ nothin’ stakes. I had already built up something like a hundred SDN photos from my explorations of Andalusia. I had to be a little discreet in grabbing my shots. But hey, the entire square proved exceedingly rich in material. 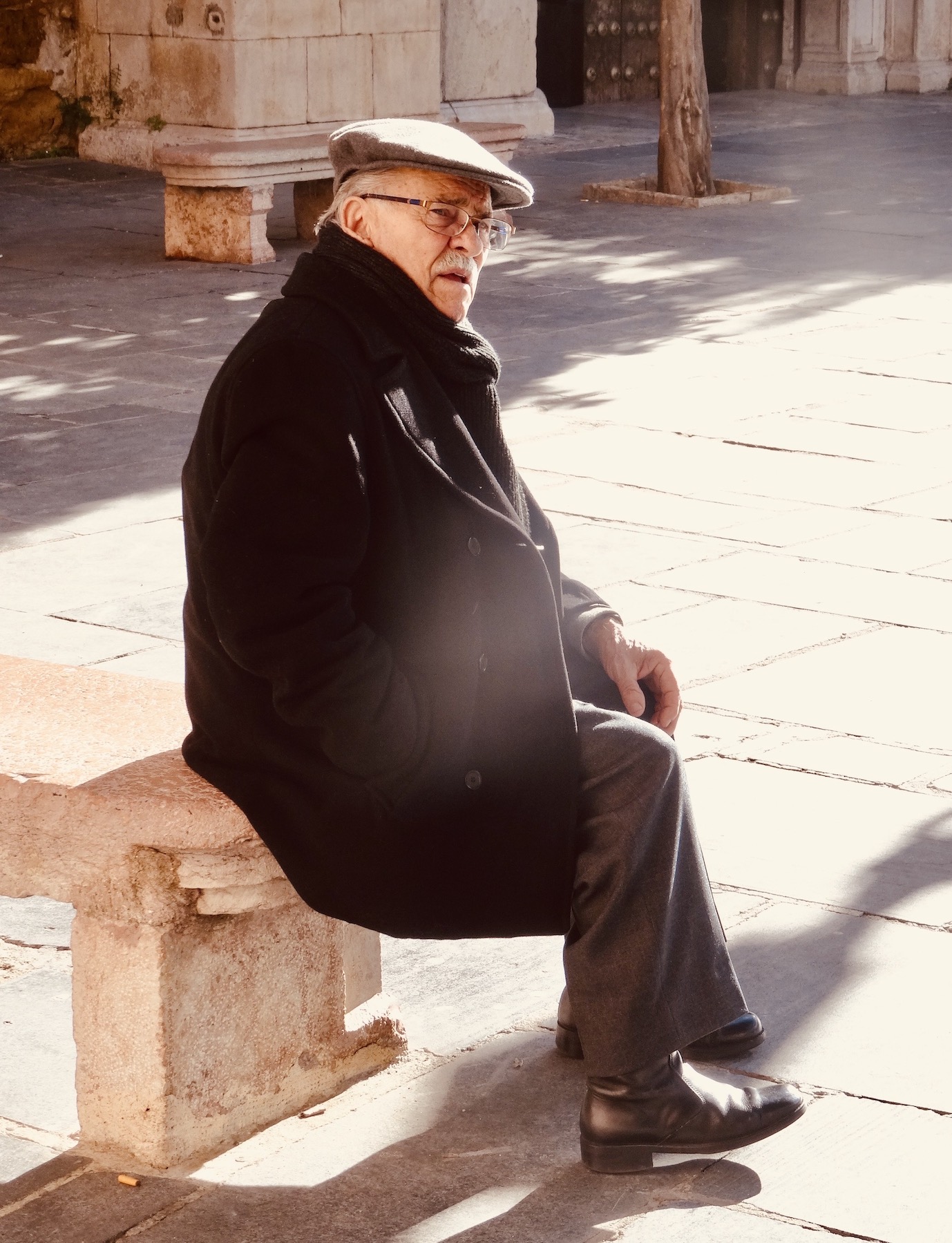 I also popped my head into San Agustín Church, a former convent dating back to 1550. Dedicated to Saint Agustin, the interior features paintings of the saint’s life, several side chapels and a stunning barrel vault ceiling. 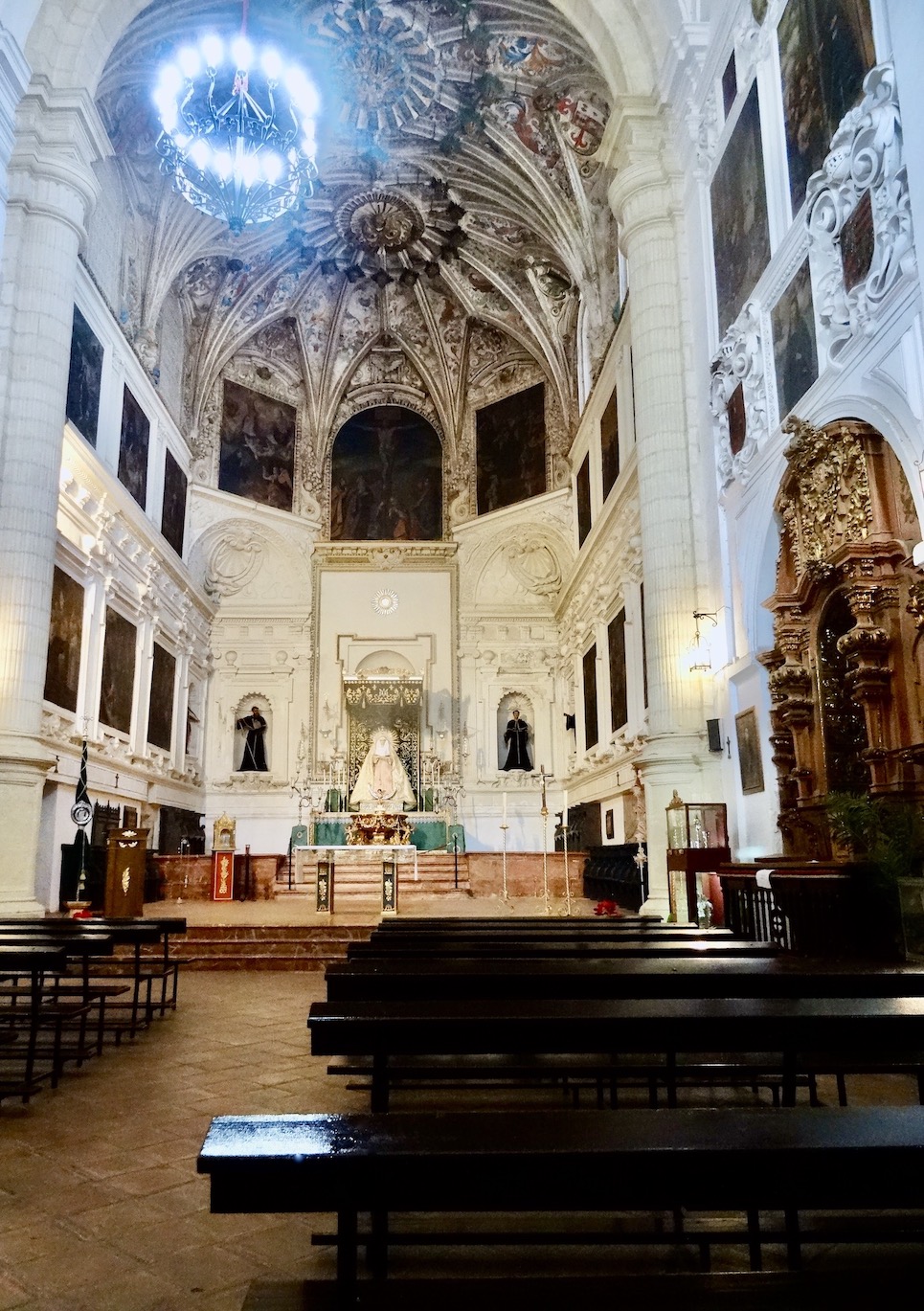 As pretty as both structures were, it was the magnificent Church of Santa María La Mayor that stole the show. By now I was climbing the winding hill trail towards the fortress. The church came into view quite suddenly through the gorgeous Arch of the Giants.

Its name references not only the arch’s considerable size, but also the fact that a huge statue of Hercules once stood here. 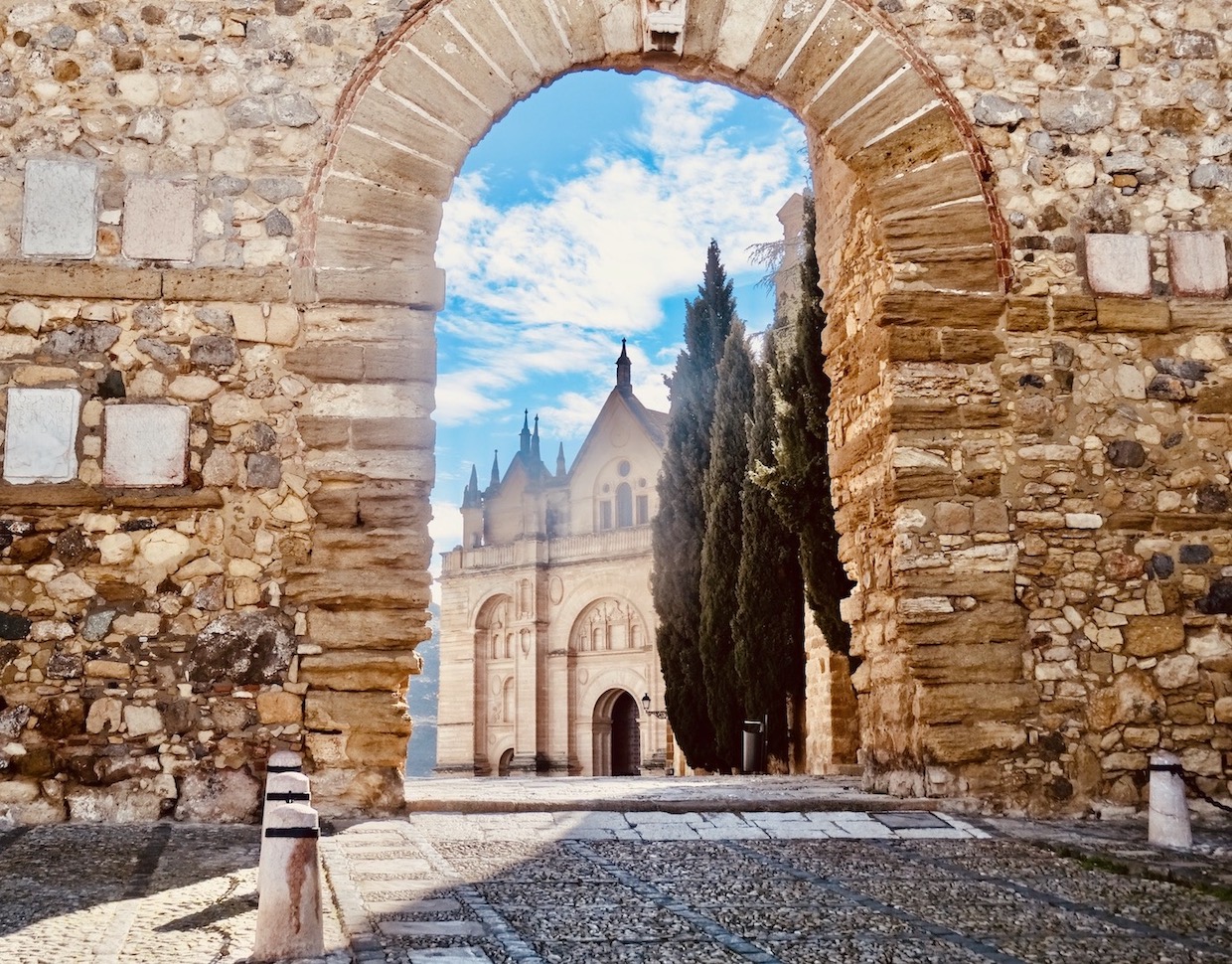 This is Andalusia’s first Renaissance church, constructed between 1530 and 1535. In addition to being a house of worship, part of the church served as a college during The Golden Age.

There was a grammar faculty here, as well as a school of poetry. Sadly, it’s no longer a functional church, but sometimes hosts concerts and cultural events. 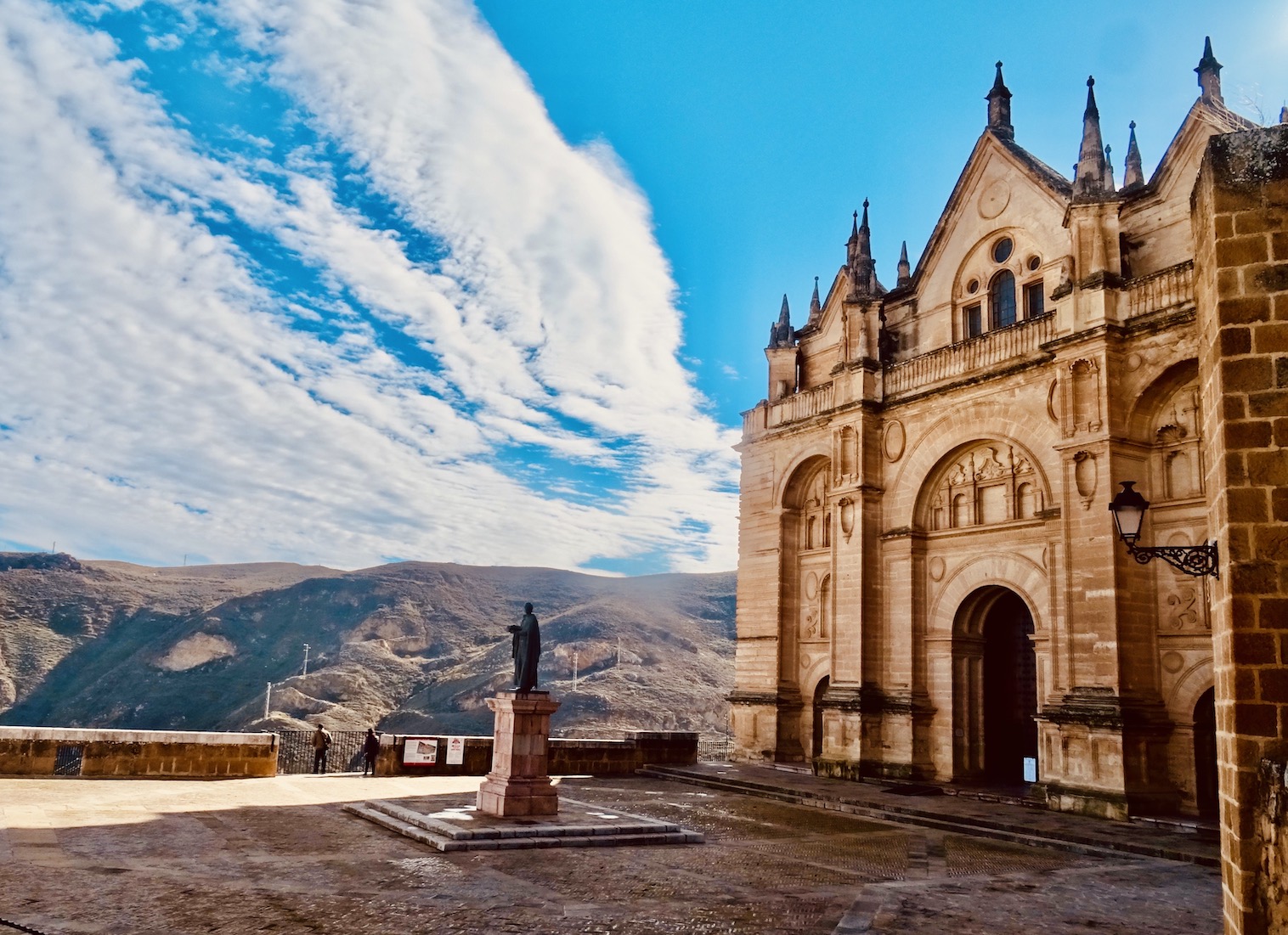 Nevertheless, it was cool to simply enjoy the exterior and the fine mountainous views from Santa María Square. Moreover, check out the statue to Pedro de Espinosa, the noted poet who studied and wrote within the church in the early 1600s. 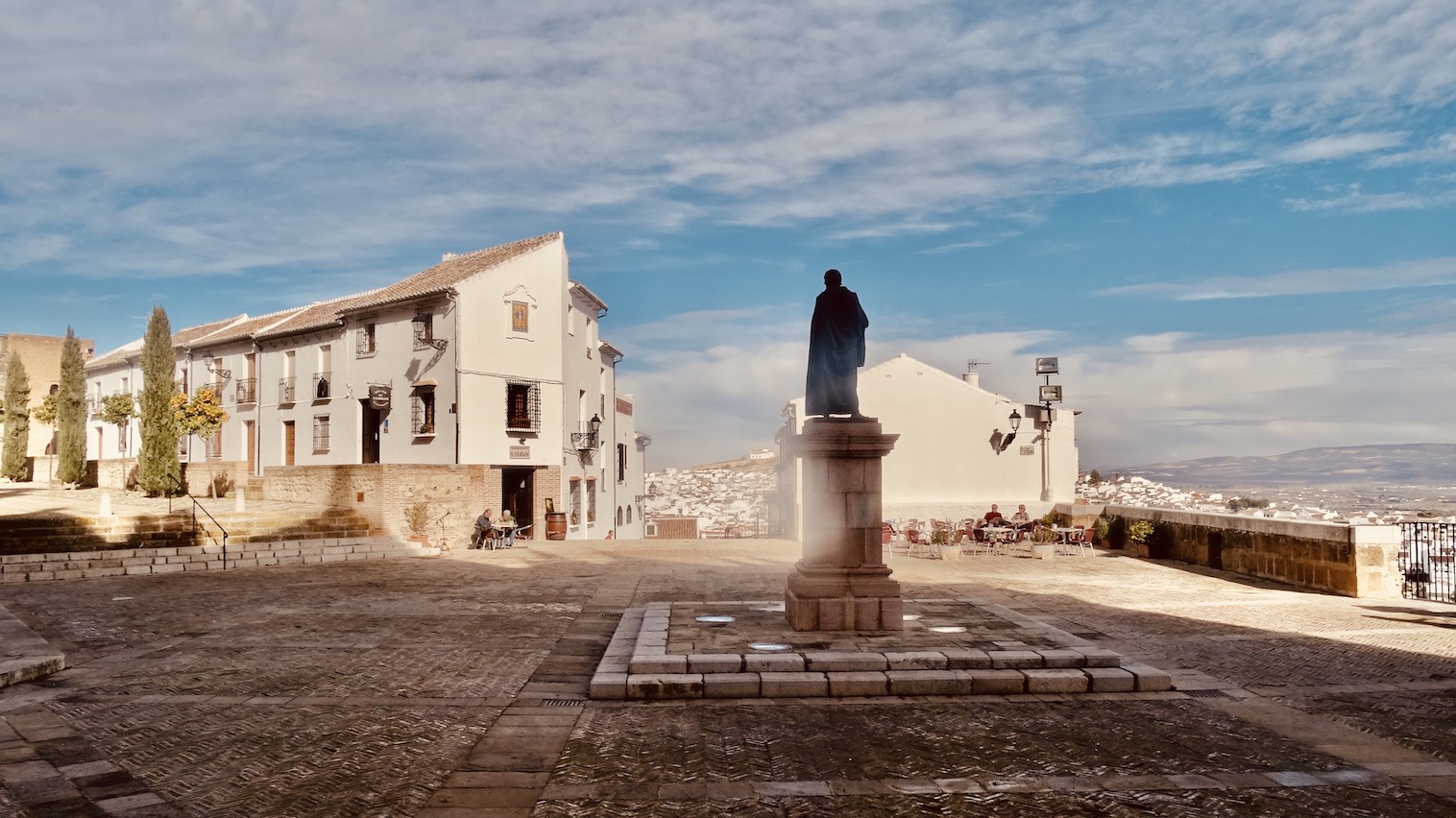 At the other end of the square, I decided to sit for a bit and soak up the atmosphere at the charming El Escribano Restaurant.

Its name is a playful nod to the church’s history as centre of writing and poetry. Escribano translates roughly as scribe or notary. It’s also sometimes used as a slang term for scribbler. Pretty cute. 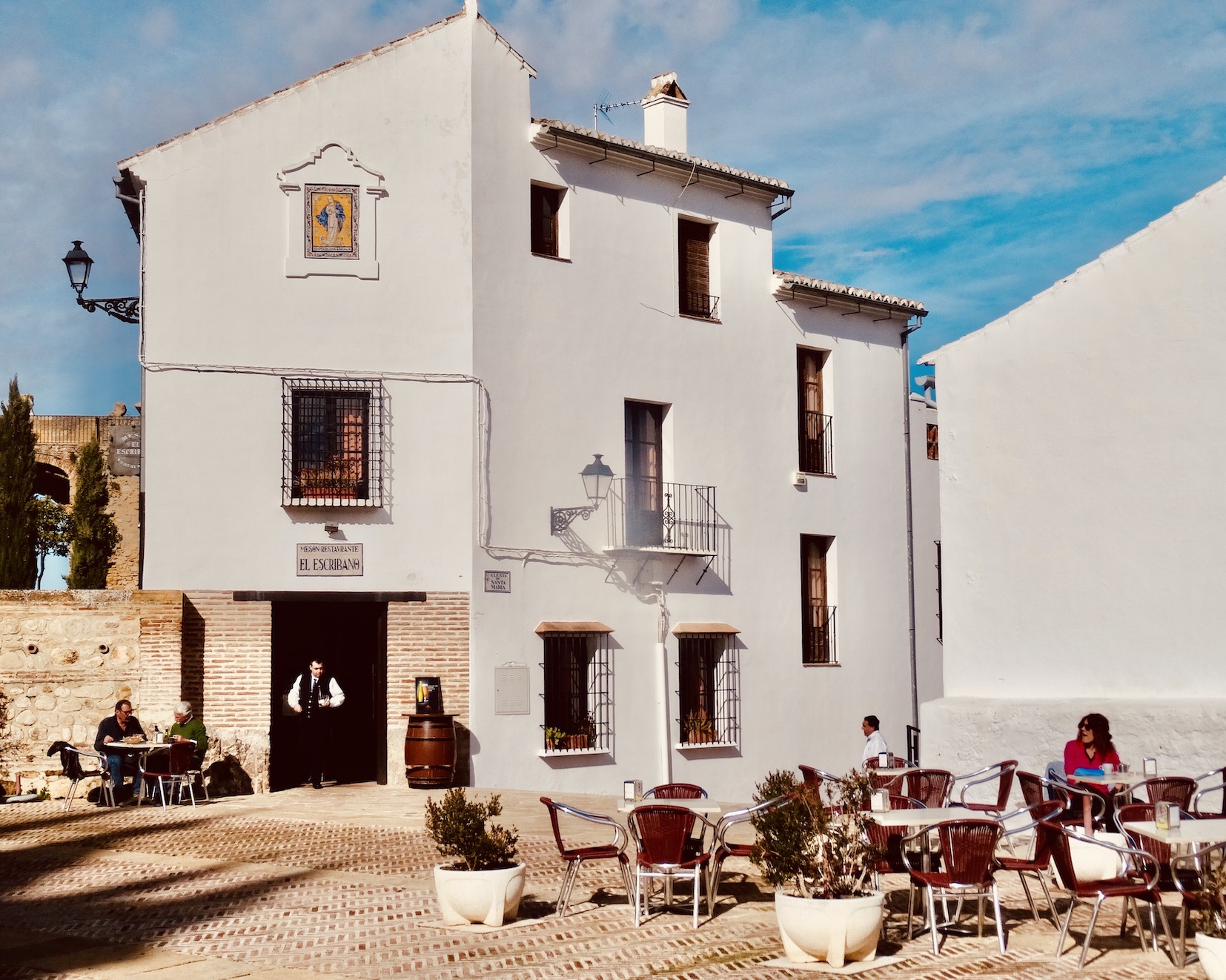 Quiet and church-facing, it’s a wonderful spot for a drink and a bite. Determined to try something traditional and unique to Antequera, I went for the waiter’s suggestion of Porra, a thick, cold soup containing chopped egg, tomato, slices of salty jamón and splashes of olive oil. It certainly hit the spot, especially with a glass of draft beer. 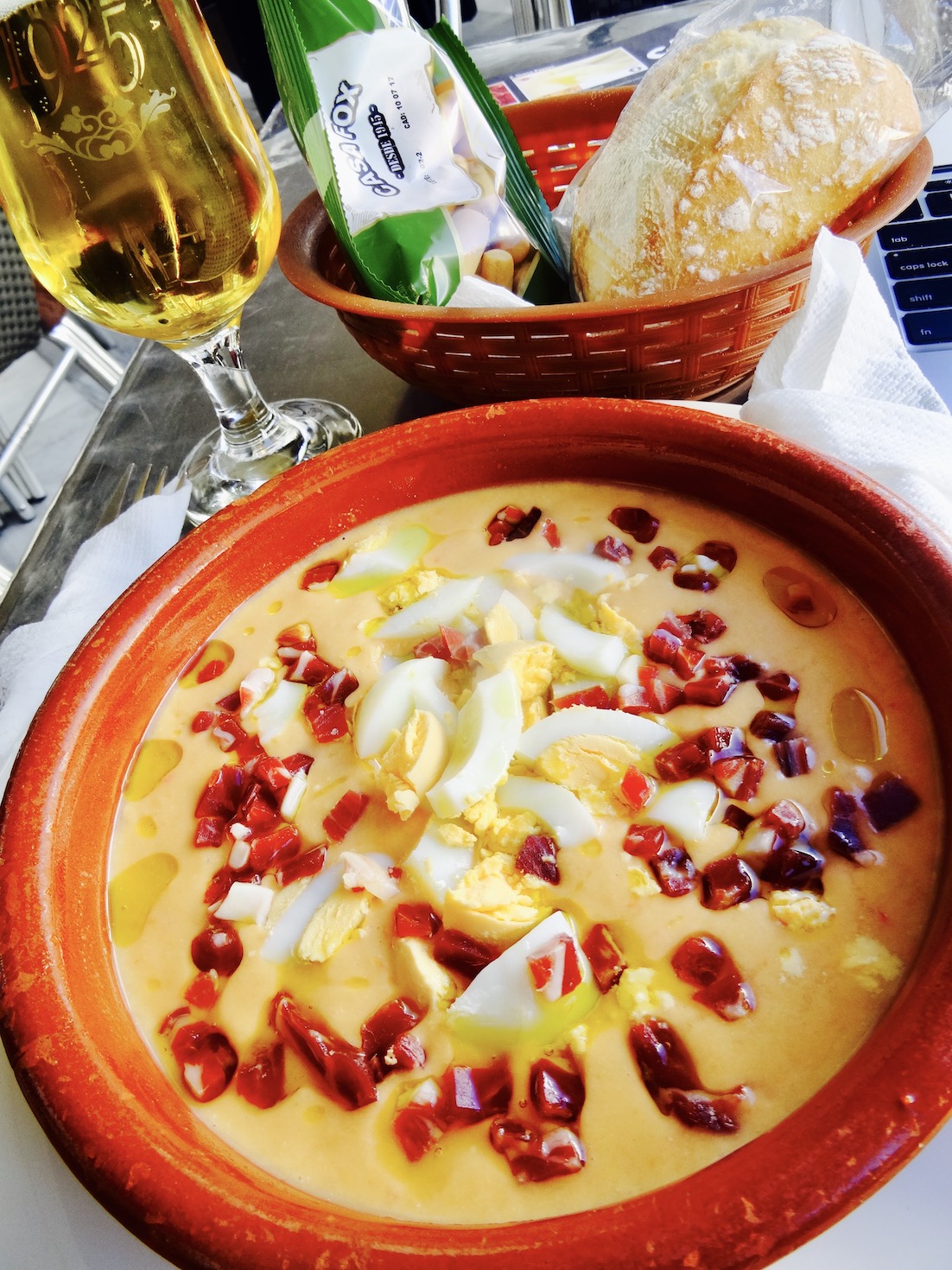 As I sat demolishing the last scraps, the restaurant’s cook emerged from the kitchen at the side of the building. I hadn’t expected an elderly lady, at least in her early seventies I’d wager. Be that as it may, I had much respect for her culinary skills. Not to mention the fact that she gets all dressed up for work. 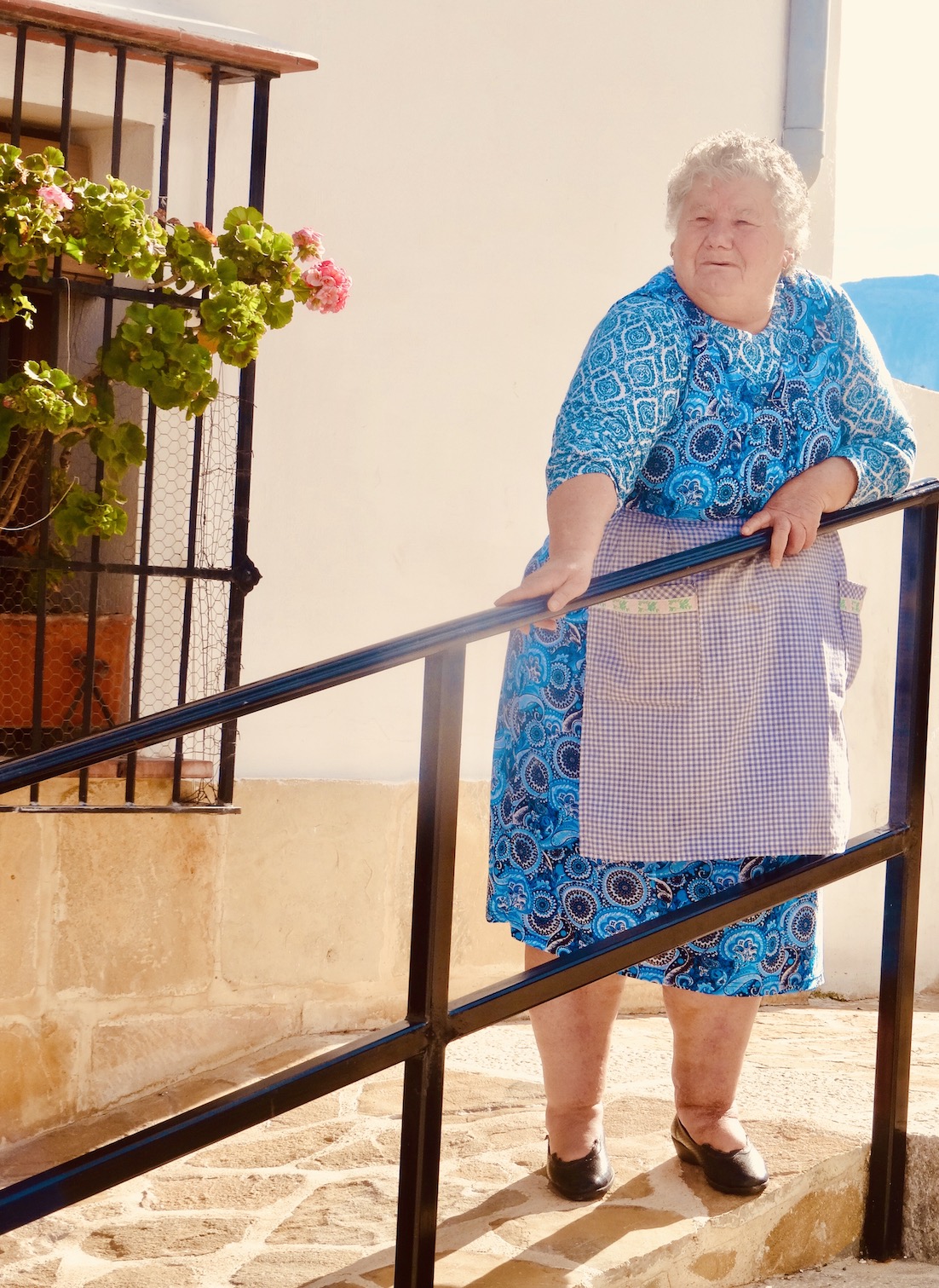 My compliments to the chef!

With a happy stomach, I continued my hike up to Antequera Fortress. As I progressed, some truly wondrous views opened up over the city. Perched above all the houses, like a little guardian was… yes… yet another church.

This one is called El Carmen Church, a late fifteenth century building with an unusual altar made from imported South American wood. 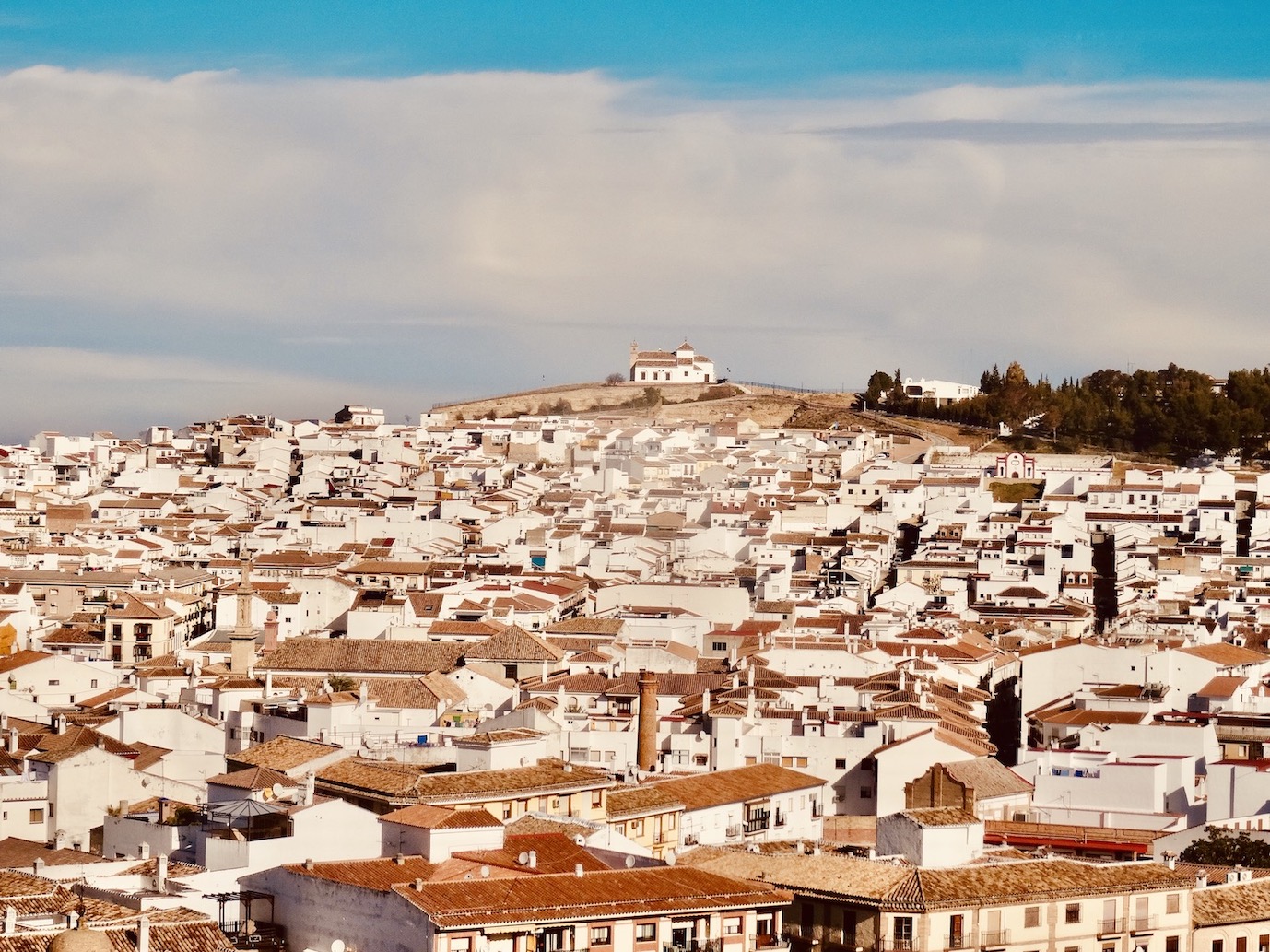 It looked so picture perfect up there on the hill I immediately began calculating if I had any hope of squeezing it in before my bus back. Alas, it wasn’t achievable and I was left ruing the Andalusian bus system. Then briefly considering an overnight stay. From what I’ve read, opening times are unpredictable, so I may have been left disappointed anyway. 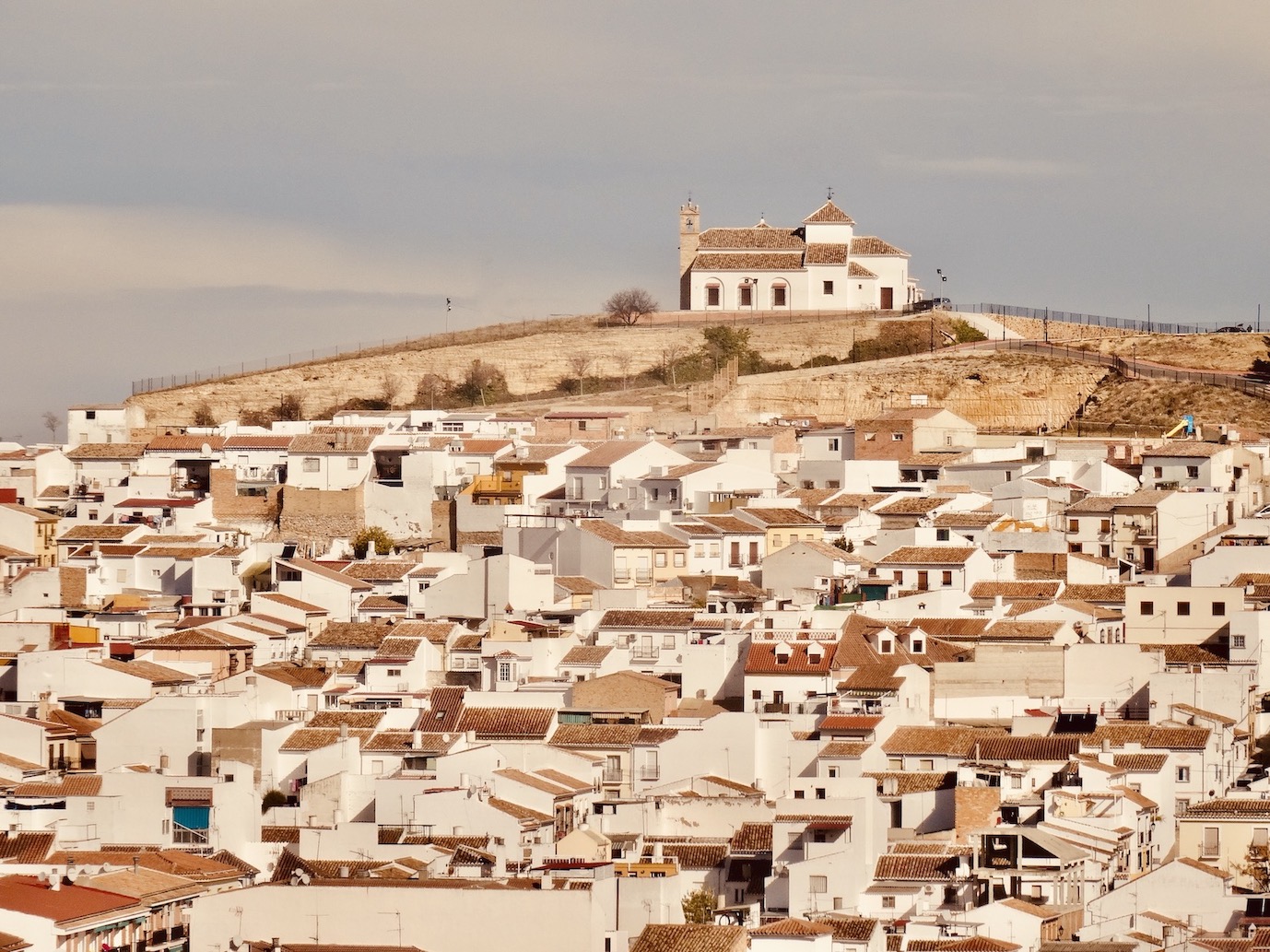 At last, I entered the main part of the fortress, known locally as Alcazaba de Antequera. Originally an ancient Roman citadel, historians say the first documented fortress here relates to the 11th century. The Moors built most of today’s remaining walls in the 14th century in order to counter the advance of The Christians from the north.

For the most part The Moors were successful, although the fortress eventually fell in 1410 when Don Fernando I of Aragon conquered the city. Later, the Bishops of Zaragoza reconstructed the fortress and made it their home for several centuries. Finally, it fell into a state of disrepair in 1656.

Essentially, the current ruin is an empty, rectangular shell with a couple of surviving towers. However, its lack of an interior is more than compensated by its size. I’m talking sixty two thousand square metres of sprawling ruins! 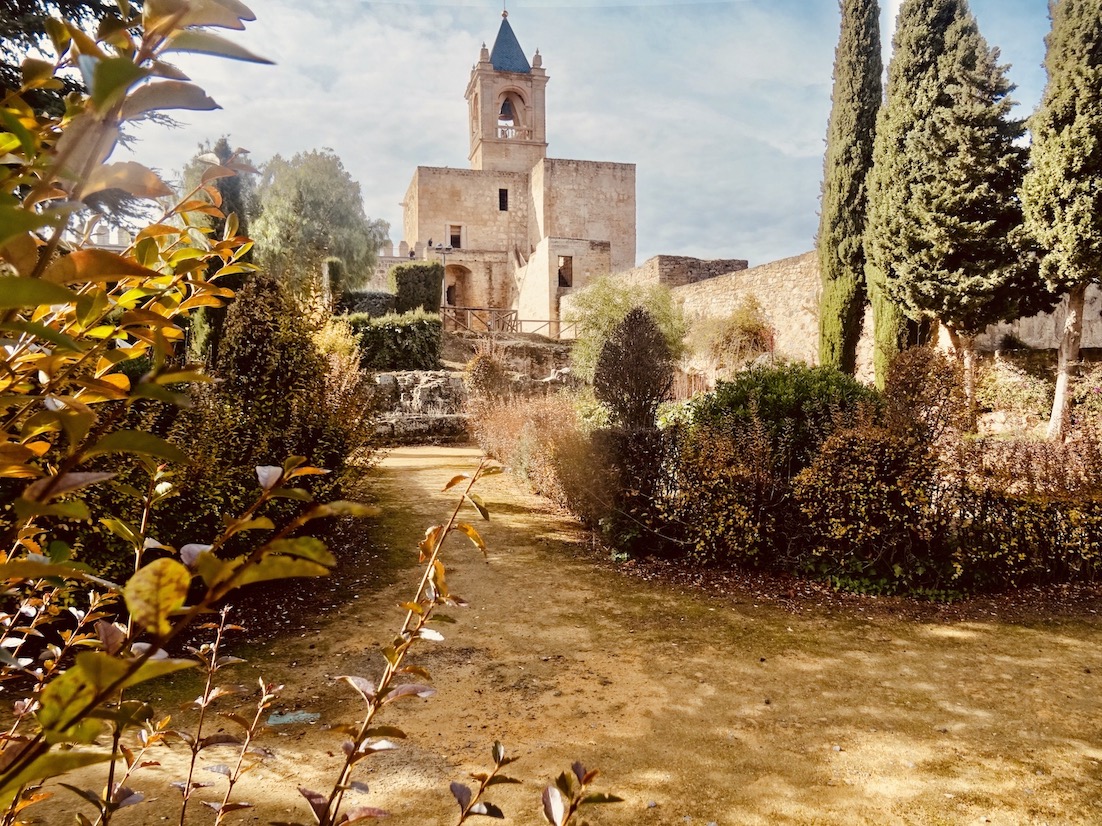 Moreover, they’ve done a great job of converting much of the space into pretty gardens. It’s a really pleasing mix of well maintained and a little wild. Neat enough to be photogenic and to allow for easy exploring. And just the right amount of ruggedness to retain a sense of historical authenticity. 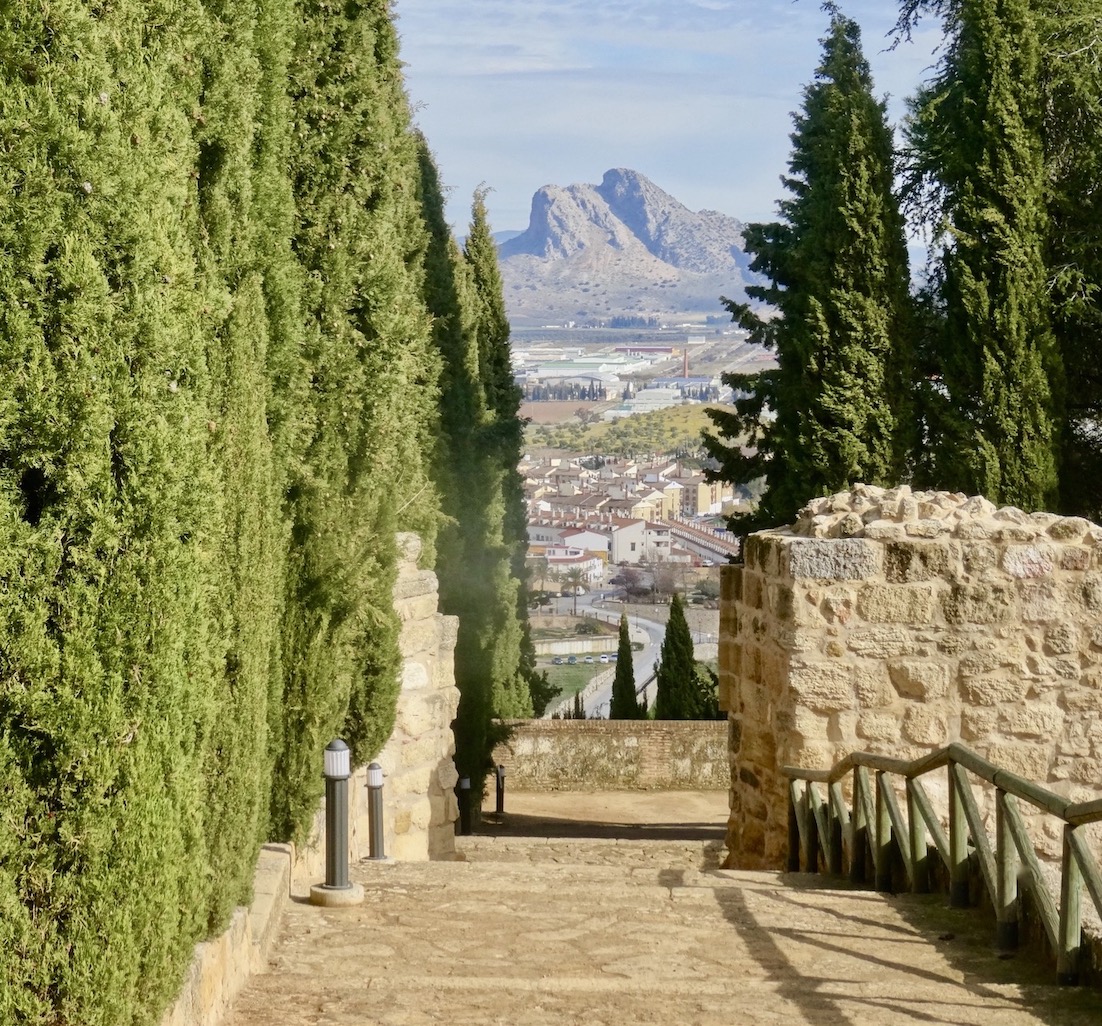 Lover’s Rock from the fortress.

Climbing ever higher and… lo and behold… it was time to meet Lover’s Rock, home to the legend of the doomed princess and soldier. Even from such a distance it impresses, an 880 metre crag of limestone overlooking the town and its surrounding valleys. 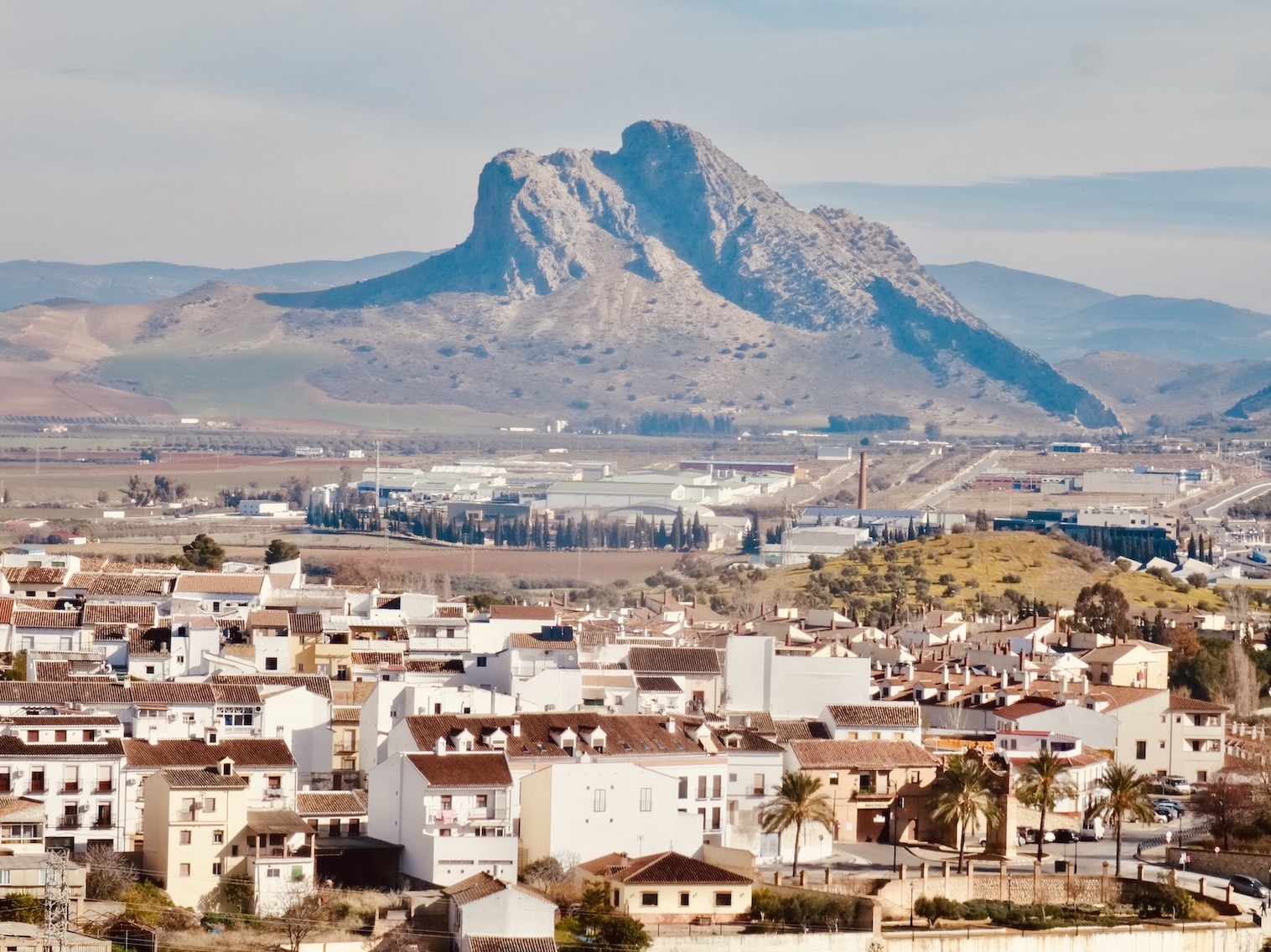 Apparently the locals have all kinds of names for it. Some call it Lover’s Leap, others know it as Montaña del Indio, because of its resemblance to the face of a Native American Indian man.

While looking at the above photo, tilt your head until it touches your right shoulder and you’ll see what they mean. 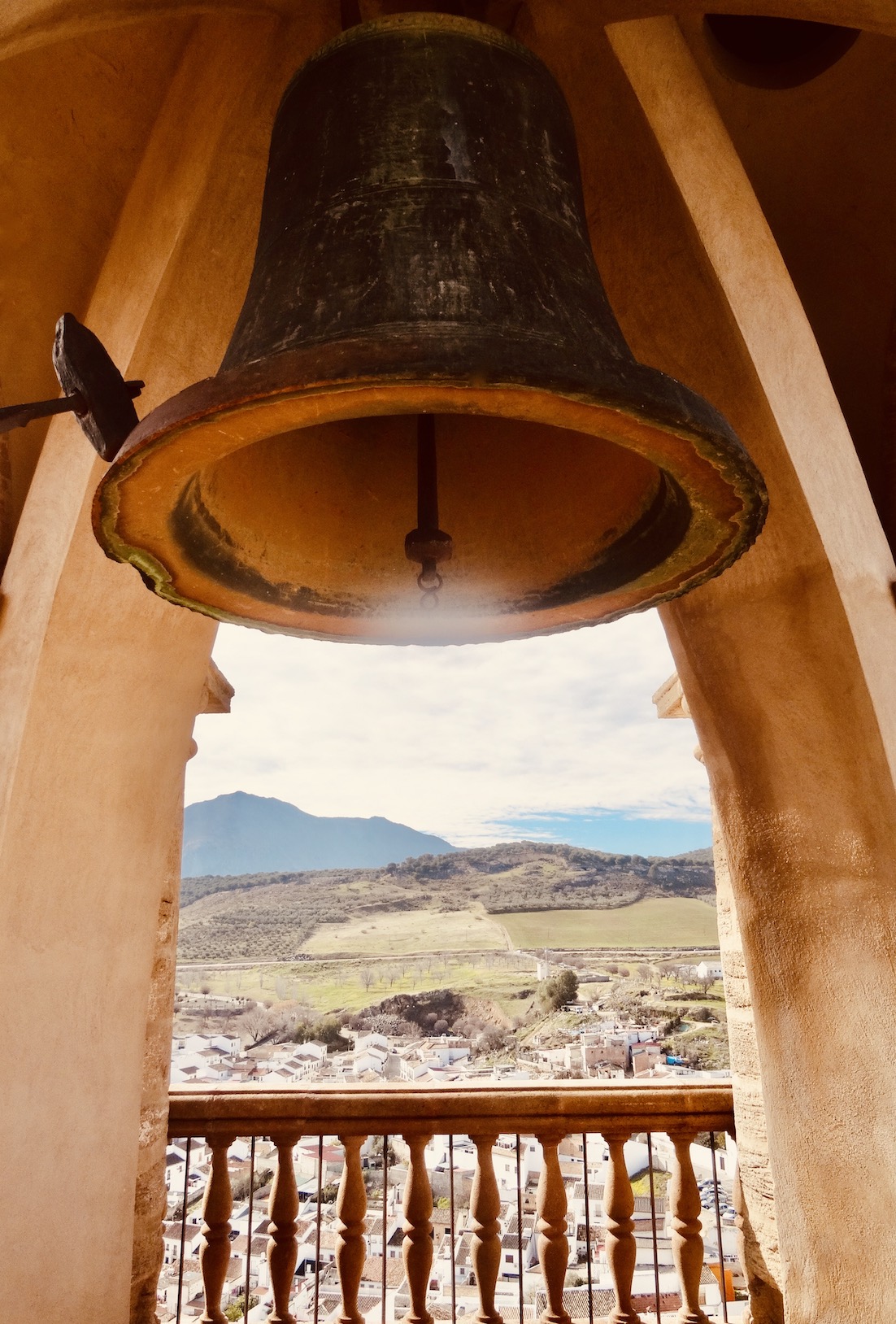 To reach the highest point of the fortress, I climbed The Catholic Bell Tower. It was added in 1582 as an extension to Tribute Tower (Torre del Homenaje).

To this day it remains the largest bell in Antequera. Not that there was any ringing during my visit. Rather, it was just me, my thoughts and a perfect silence as I gazed out across the landscape. 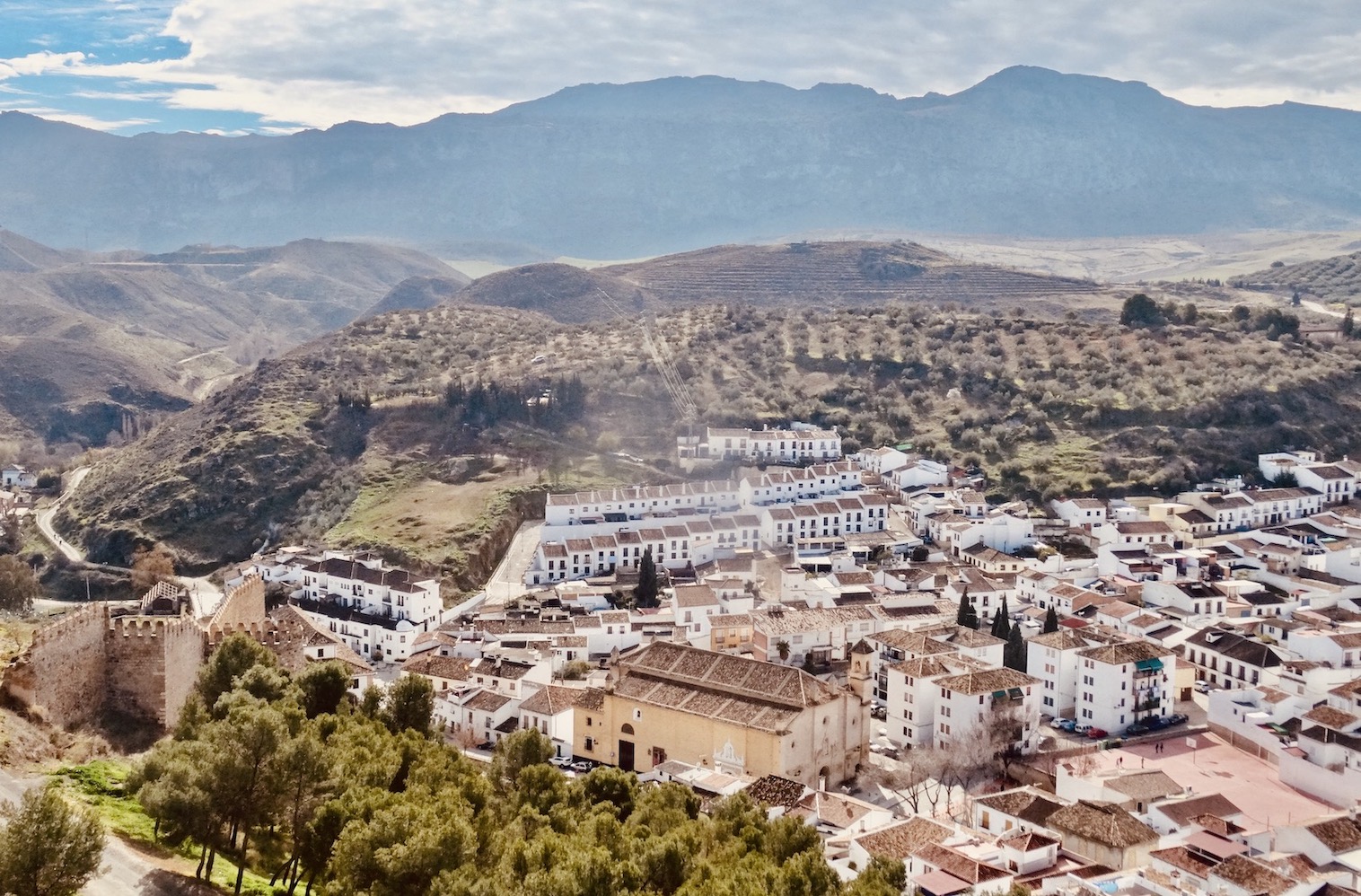 The impressiveness of the views jumps up an extra notch, with rolling hills nestled beneath the glare of the Sierra del Torcal mountain range. It’s highly atmospheric and, in my book, more than justifies the fortress’ 6 Euro entrance fee. 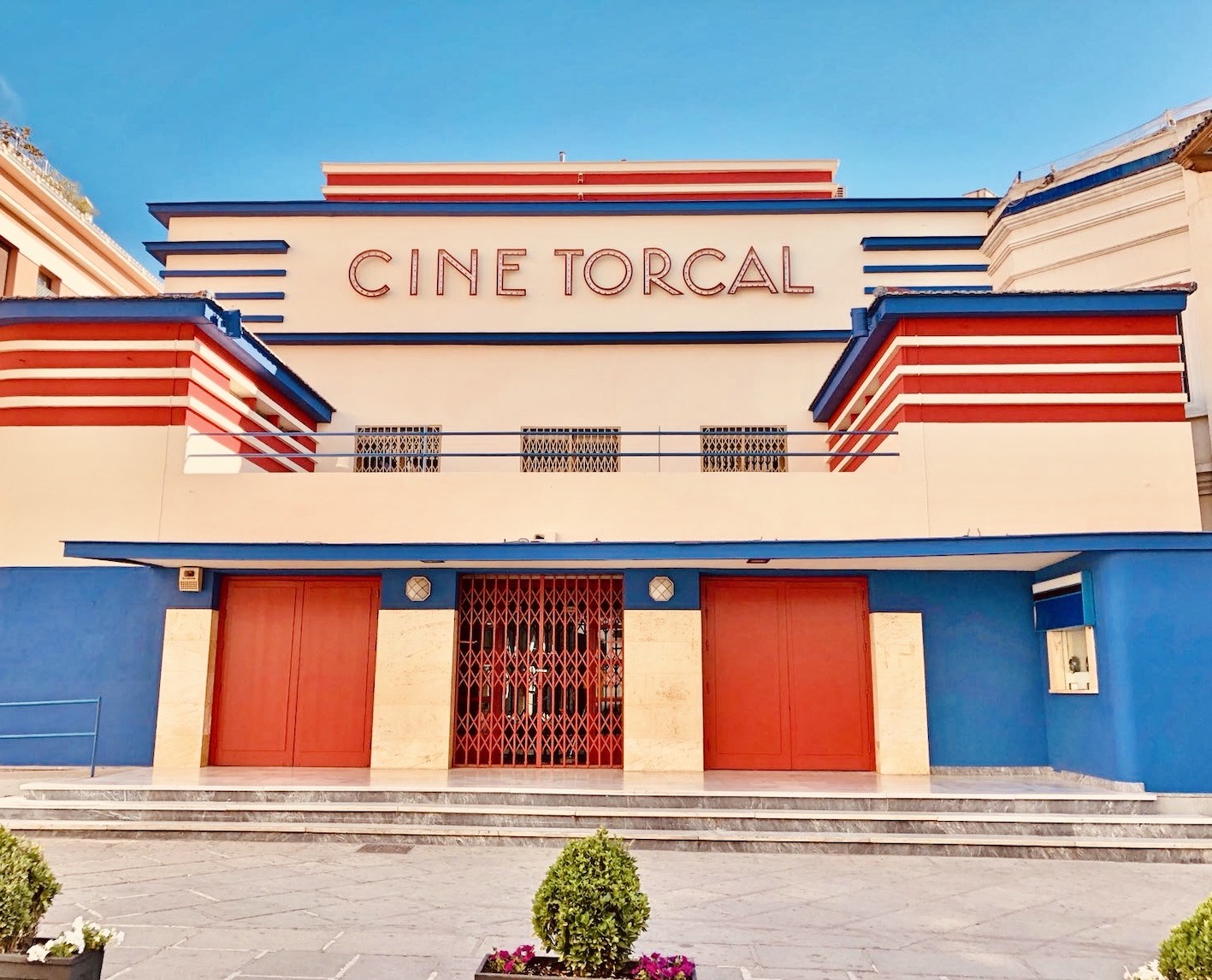 My time in Antequera was too short. Before I knew it, I had to make tracks for my bus back to Malaga. Along the way, I stumbled upon Cine Torcal, an incredibly endearing cinema that first opened its doors in 1933.

One of the very few cinemas to be designated as a World Heritage site, it was designed by the famed architect Antonio Sanchez Esteve. It focuses on arthouse films and occasionally hosts cultural events. If I ever come back, a night of classic Spanish cinema would be a must.