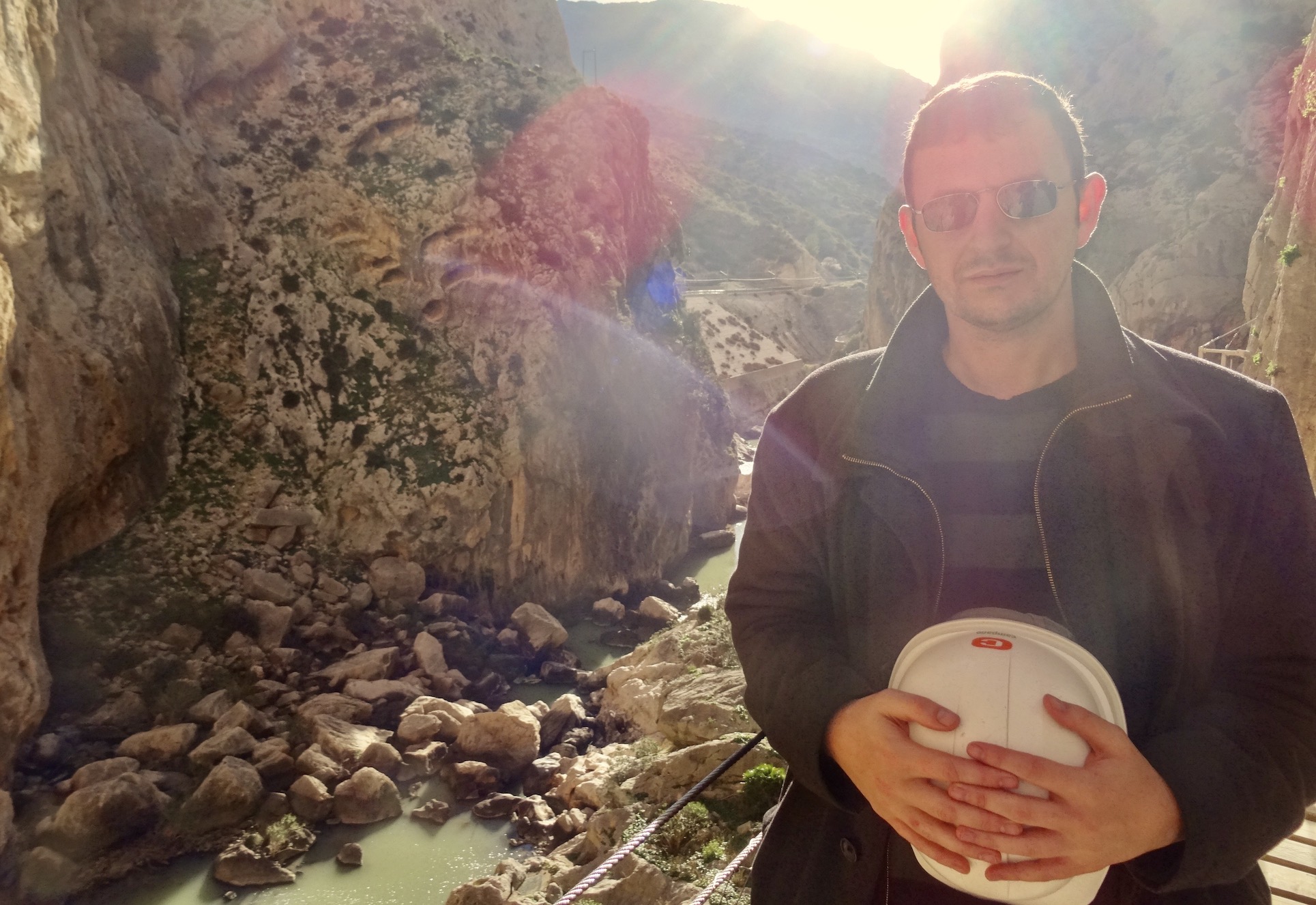 January 2017. Andalusia is a truly breathtaking region when it comes to natural landscapes. Whether out in the country or based in a village, town or city, one is never far away from stunning views.

After nearly a year living in Southern Spain, I had already seen many of the region’s most picturesque places. One crisp, sunny morning however, I took things to the next level with a visit to El Caminito del Rey, one of Spain’s most famed beauty spots. 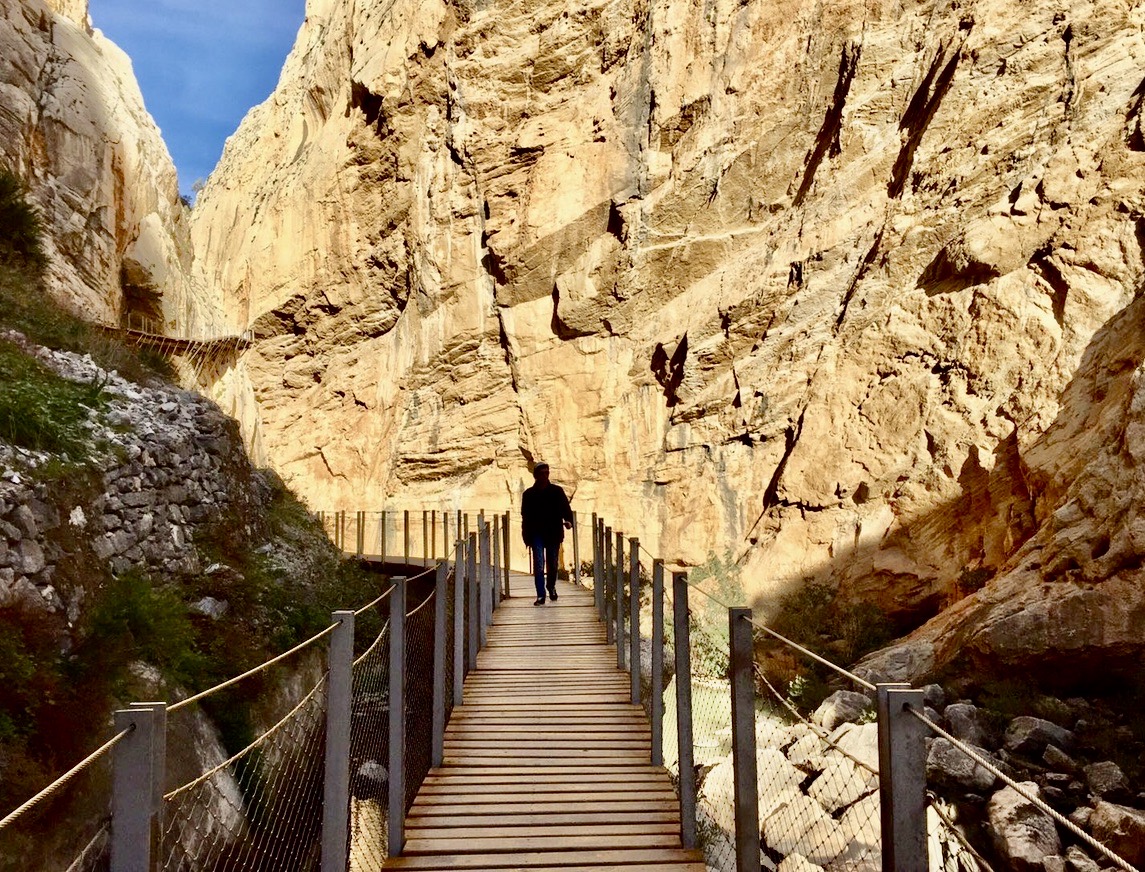 The story of this highly unique hiking route dates back to 1901. At that time there were two hydroelectric power plants near the village of El Chorro, home to a dramatic 300 metre gorge.

The bosses at the two plants wanted a better transport connection between their respective sites. A route of some sort that would also allow workers to walk back and forth with ease. 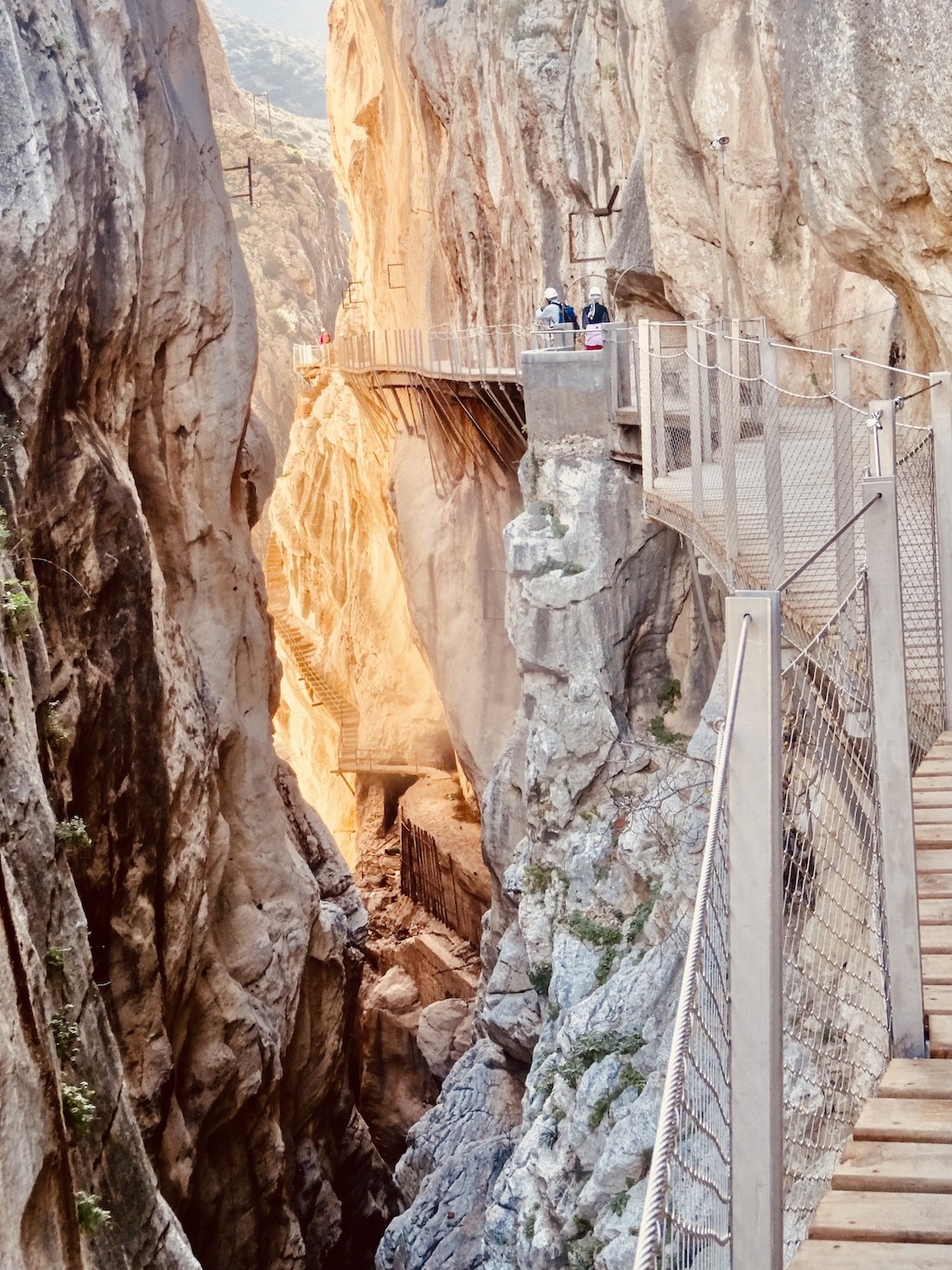 They decided to build an ambitious, three kilometre wooden walkway right around the face of El Chorro Gorge, about a hundred meters above The Guadalhorce River. Construction took a gruelling four years, with the walkway finally opening in 1905. 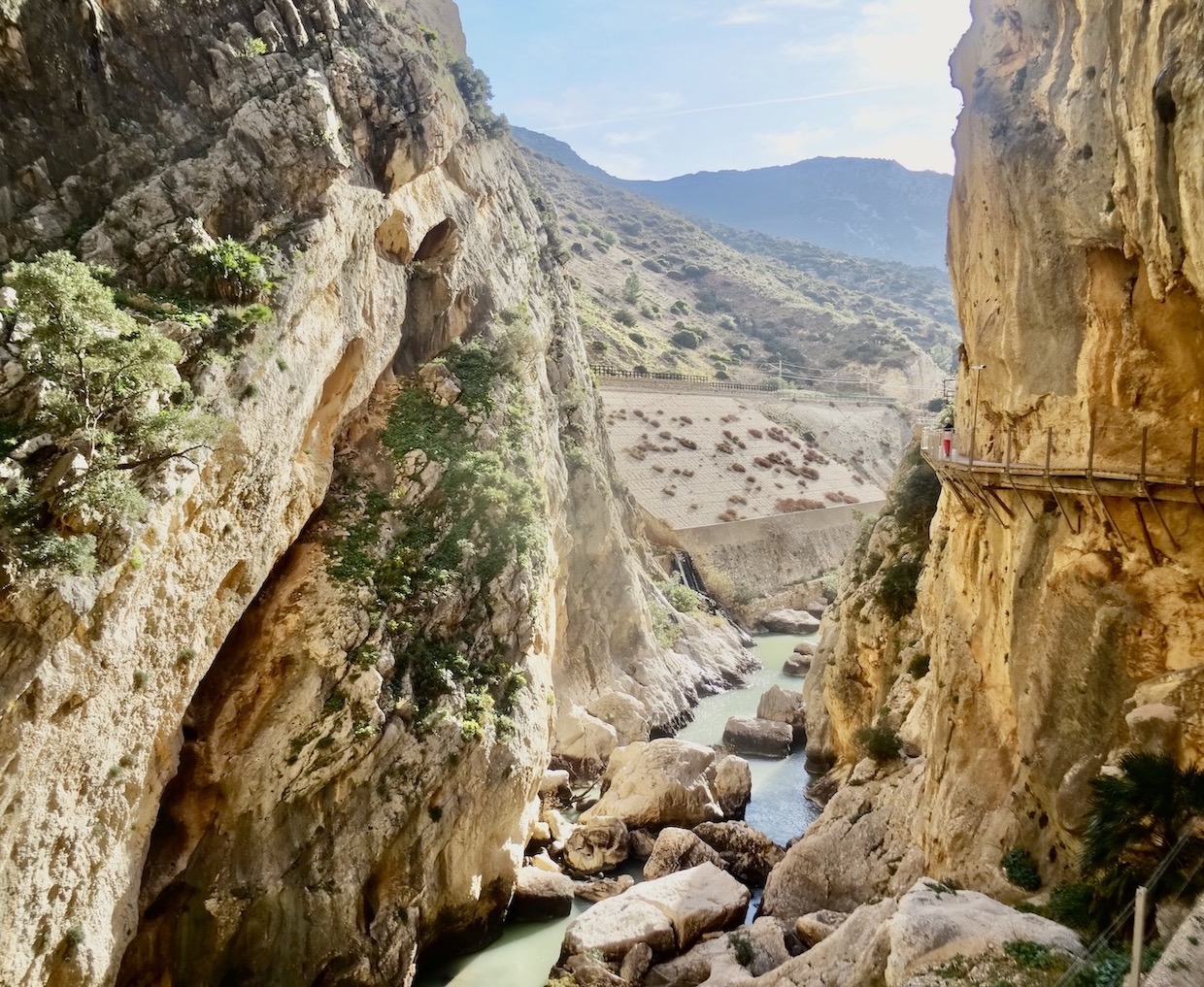 In 1921 King Alfonso XIII crossed the walkway when he came to visit the gorge for the inauguration of the Guadalhorce Hydroelectric Dam. Naturally the king’s presence was a huge deal for the village. 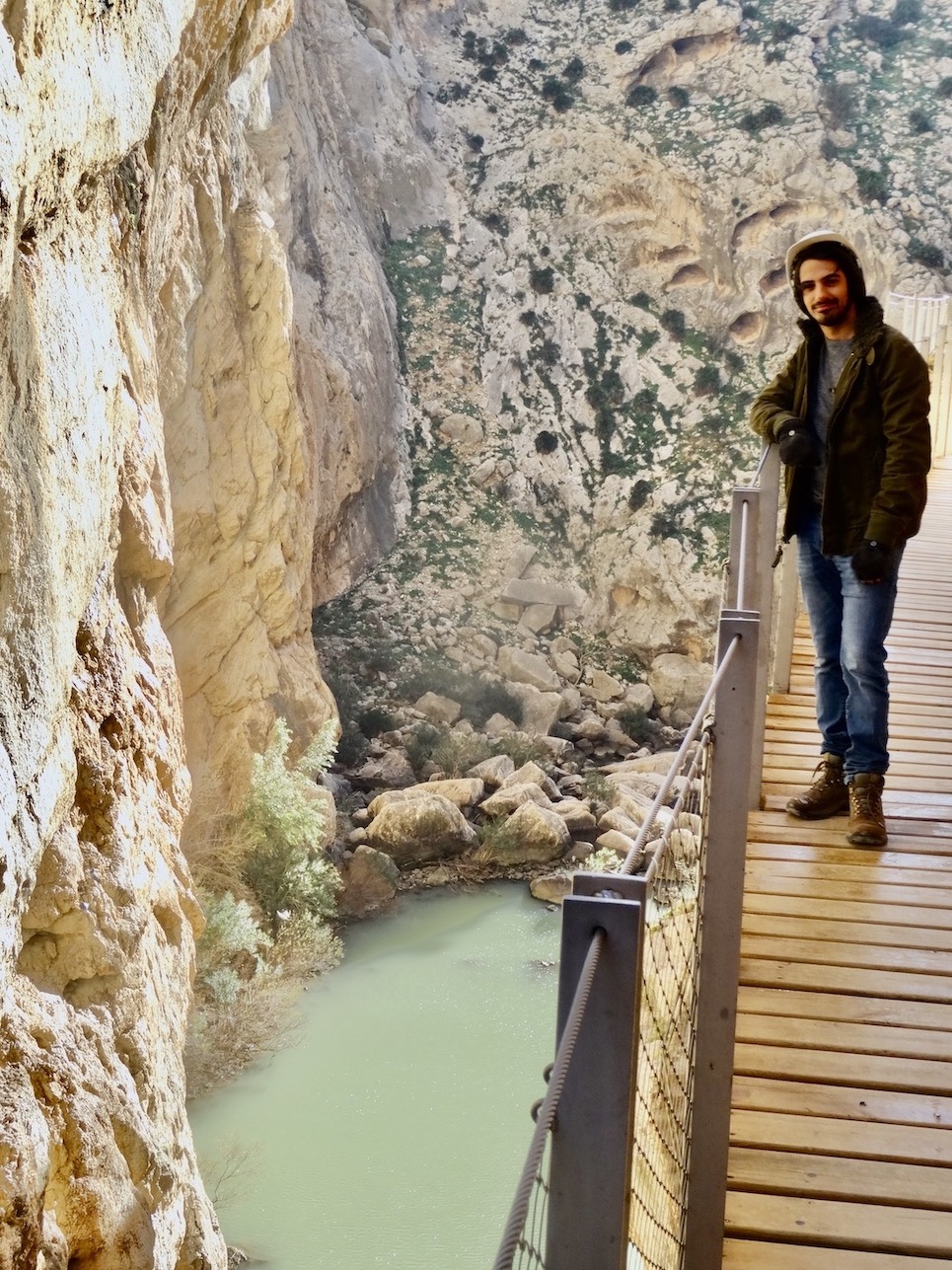 Excited to follow in the footsteps of a king, I came to El Chorro with my friend Hassan. We had to book our tickets in advance online through what is quite possibly the most confusing, inconvenient booking service I have ever seen. So baffling actually that one blogger wrote a specific guide on how to navigate it. 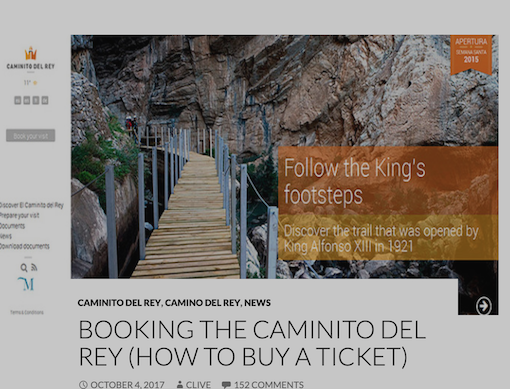 At the walkway’s entrance you exchange your booking confirmation for a permit, as they call it. They also give you a helmet which YOU MUST WEAR AT ALL TIMES.

No kidding, we really got a lecture about this. Falling rocks can hit you on the head at any moment, they said. Oh, and failure to comply could result in us getting kicked out of the gorge. 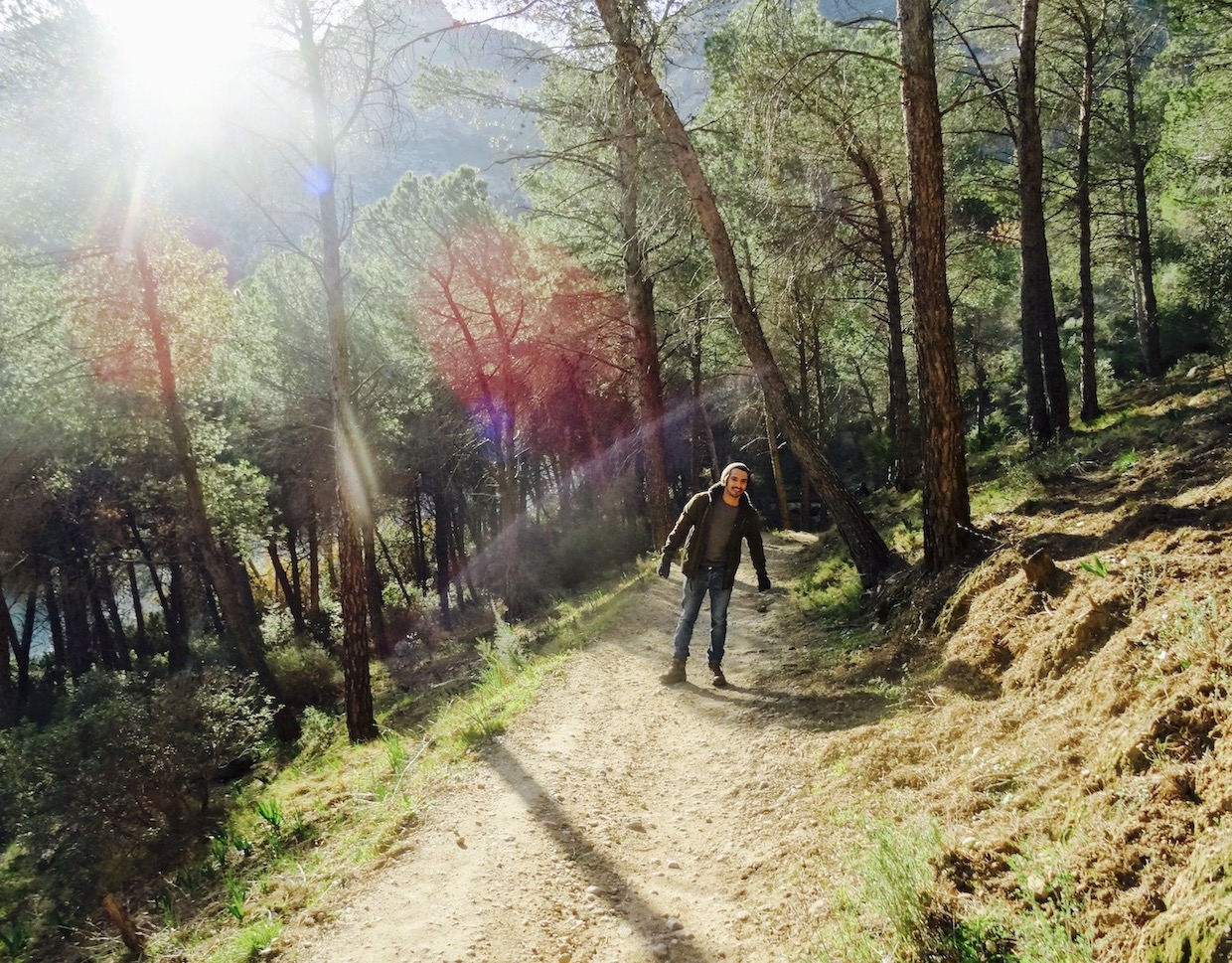 It took Hassan and I a leisurely half an hour to tackle the first section of the path. Then, much to our surprise, the boardwalk gives way to a lovely woodland trail. It was absolutely gorgeous, running alongside an idyllic blue-green stretch of The Guadalhorce River. 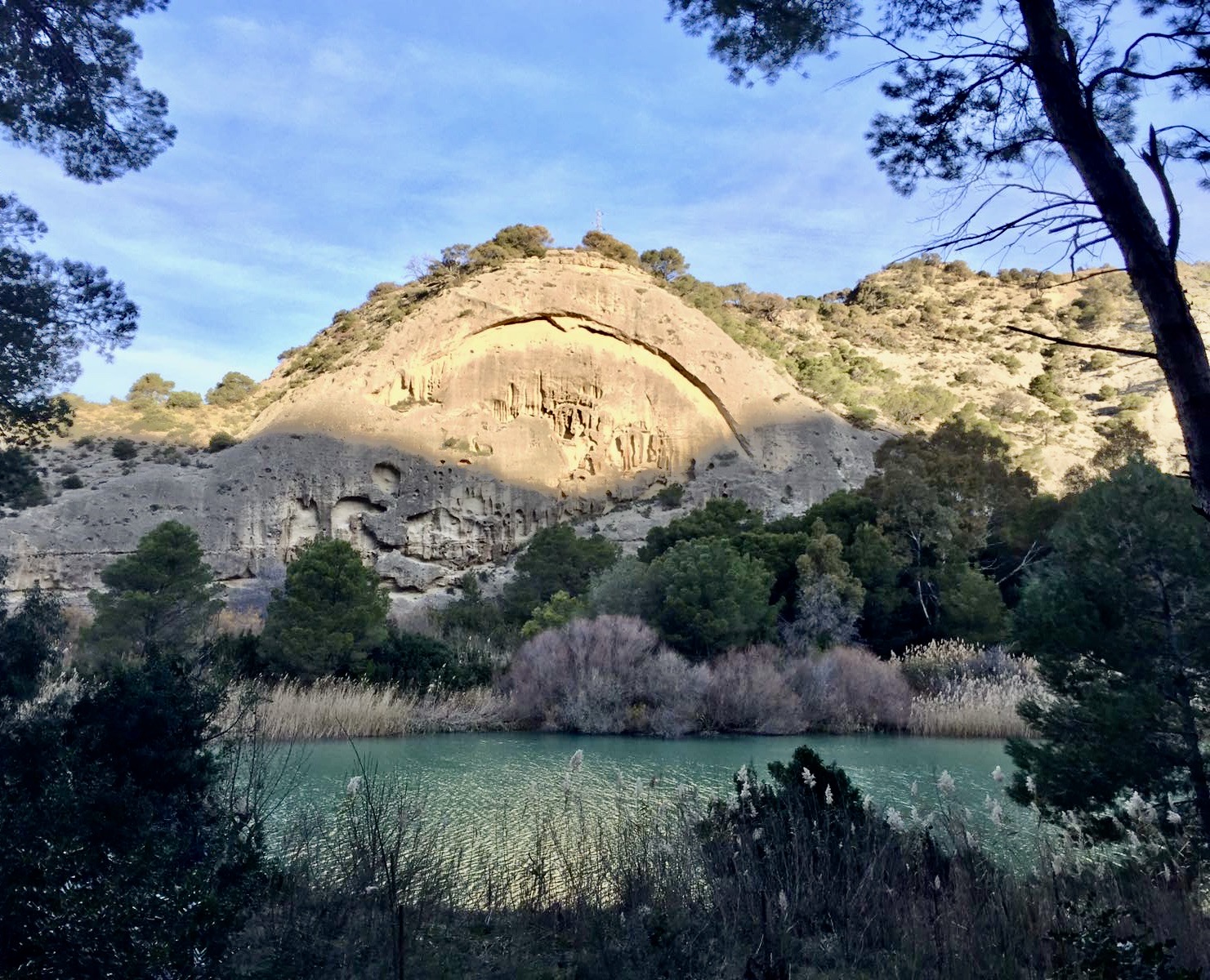 In one of several clearings, there are some fascinating natural rock formations. Meanwhile, a little further along, we spied an abandoned stone house down in the valley. The place was literally screaming at me to go and explore. But of course it’s strictly forbidden to wander off the path. 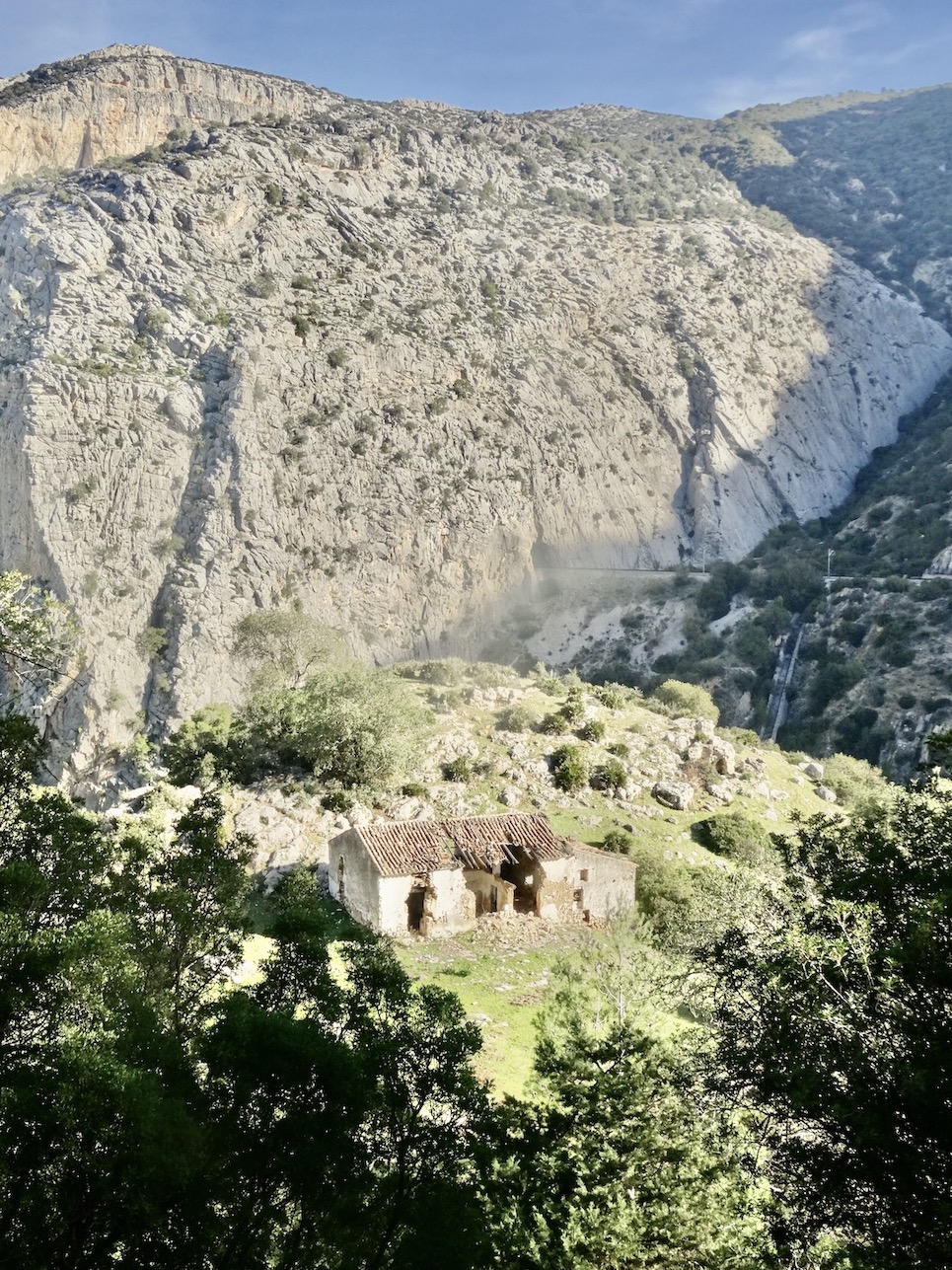 Down in El Chorro Gorge.

Speaking of strictness, Hassan and I were foolish enough to think we could take our helmets off in the forest. After all, there were no rocks in sight and I felt certain a tree wasn’t going to topple onto me.

But then, to my audible disbelief, a park warden literally popped out from behind some trees with a crystal clear demand: “HELMETS ON!!!” 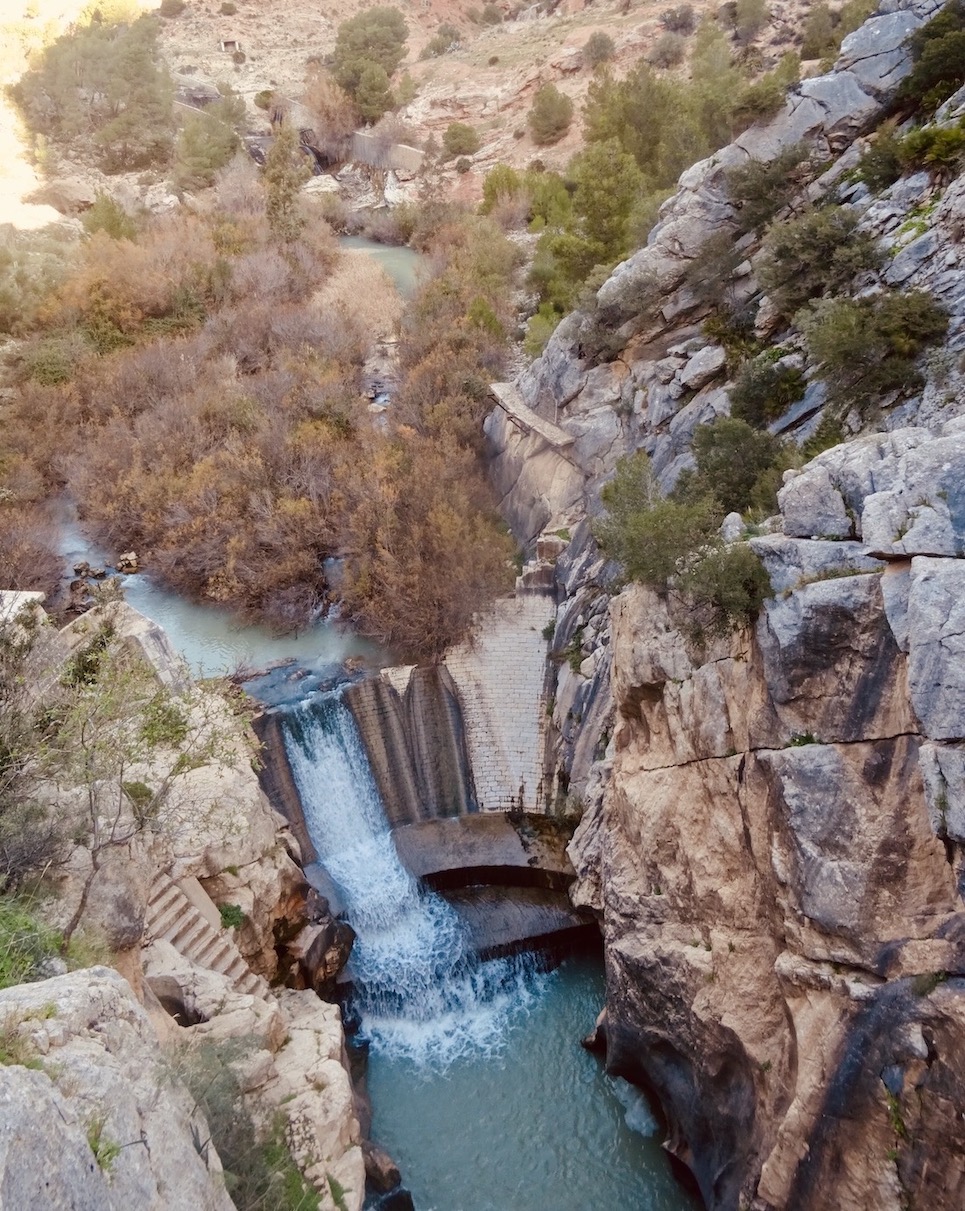 Eventually, the forest trail led us back onto the boardwalk, which twists dramatically around a bend in the cliff. Down below, I could see one of the very pretty El Chorro Falls. Really charming, as was the sound of the gushing water, which followed us for quite some time. 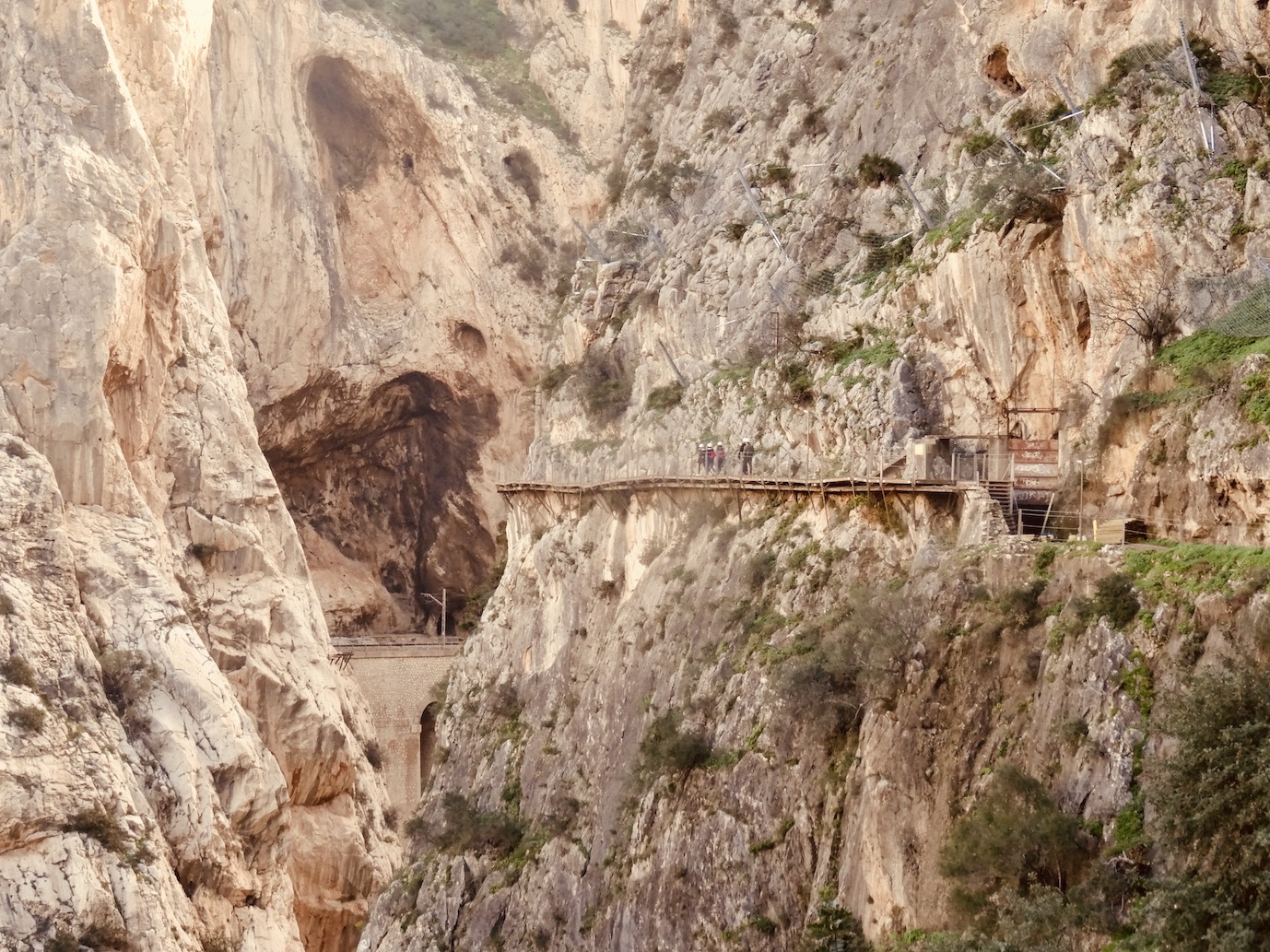 By the mid 1990s the original path had fallen into a terrible state of disrepair. It was so bad people were actually losing their lives due to broken railings and missing chunks of stone. As a result, several articles published in Spain claimed the walkway was “the most dangerous path in the world”. Most definitely not fit for a king.

Thus the El Caminito del Rey closed for a while for an extensive four year renovation project. Today’s safety first, tourist friendly walkway opened in March 2015. Brilliantly, you can still see sections of the old path pinned to the side of the cliff as you progress. Looks kinda hairy to me. 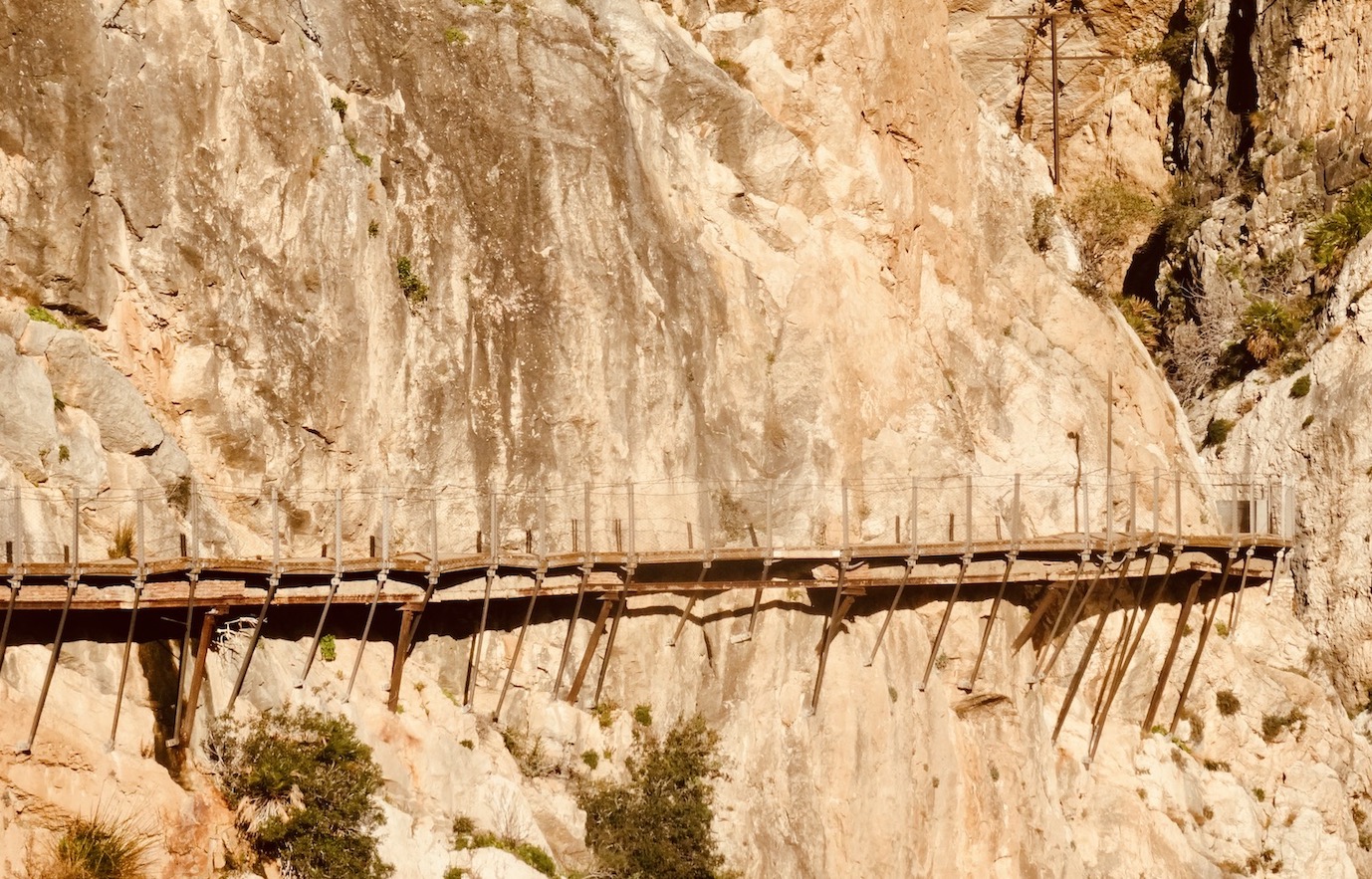 Not in a month of Sundays…

Not that there wouldn’t be crazy people out there who’d love to take that old pathway on. El Chorro Gorge is extremely popular with rock climbers and indeed we saw one guy top roping that afternoon. As I took my photo, I guessed he was about a quarter of the way up. 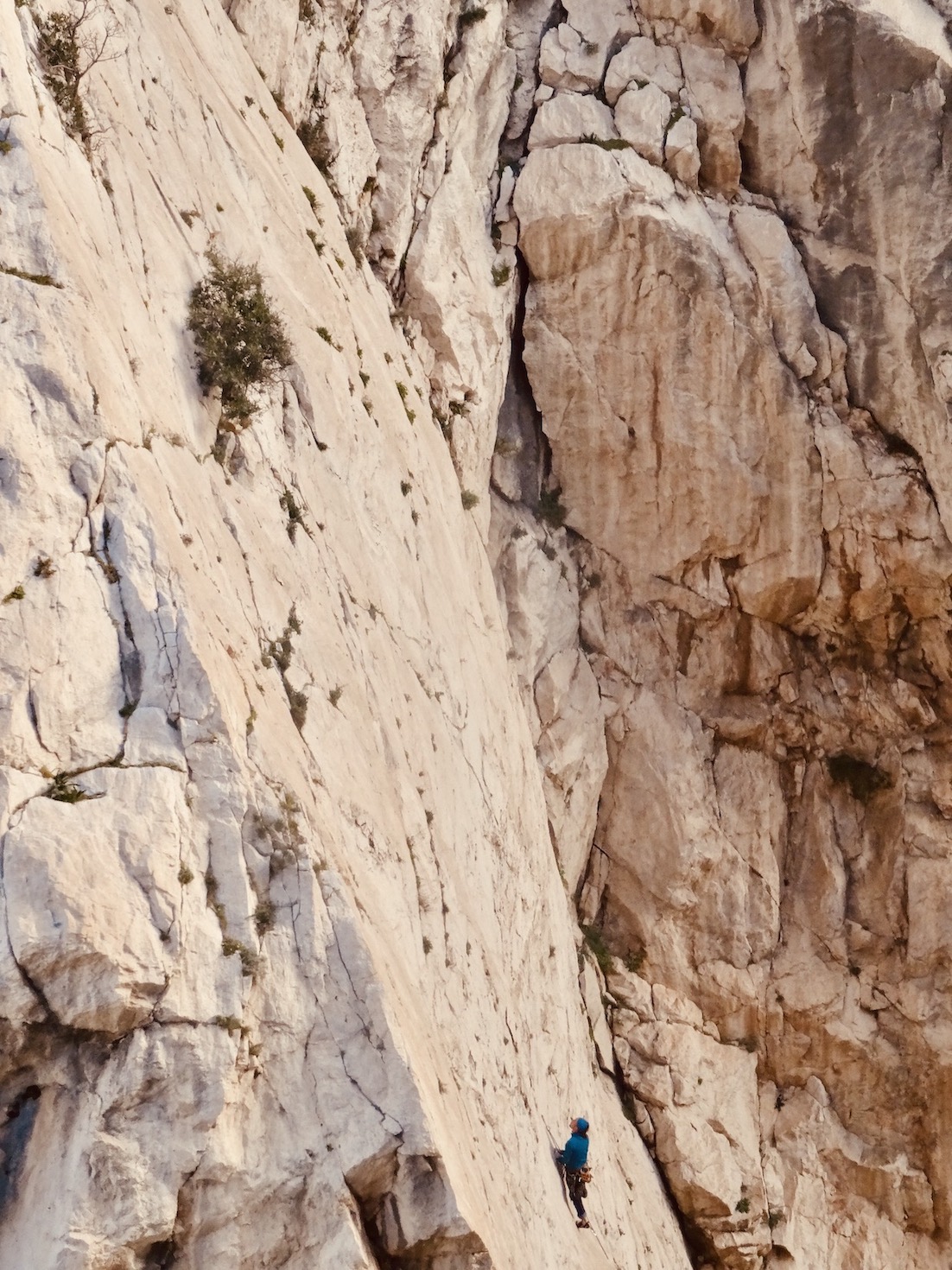 “The only way is up… baaaaby…”

Equally implausible, to me at least, was the moment when a passenger train suddenly whooshed through the gorge. Whaaaat? It came and went in a matter of seconds, so I was pleased as punch to capture the moment. 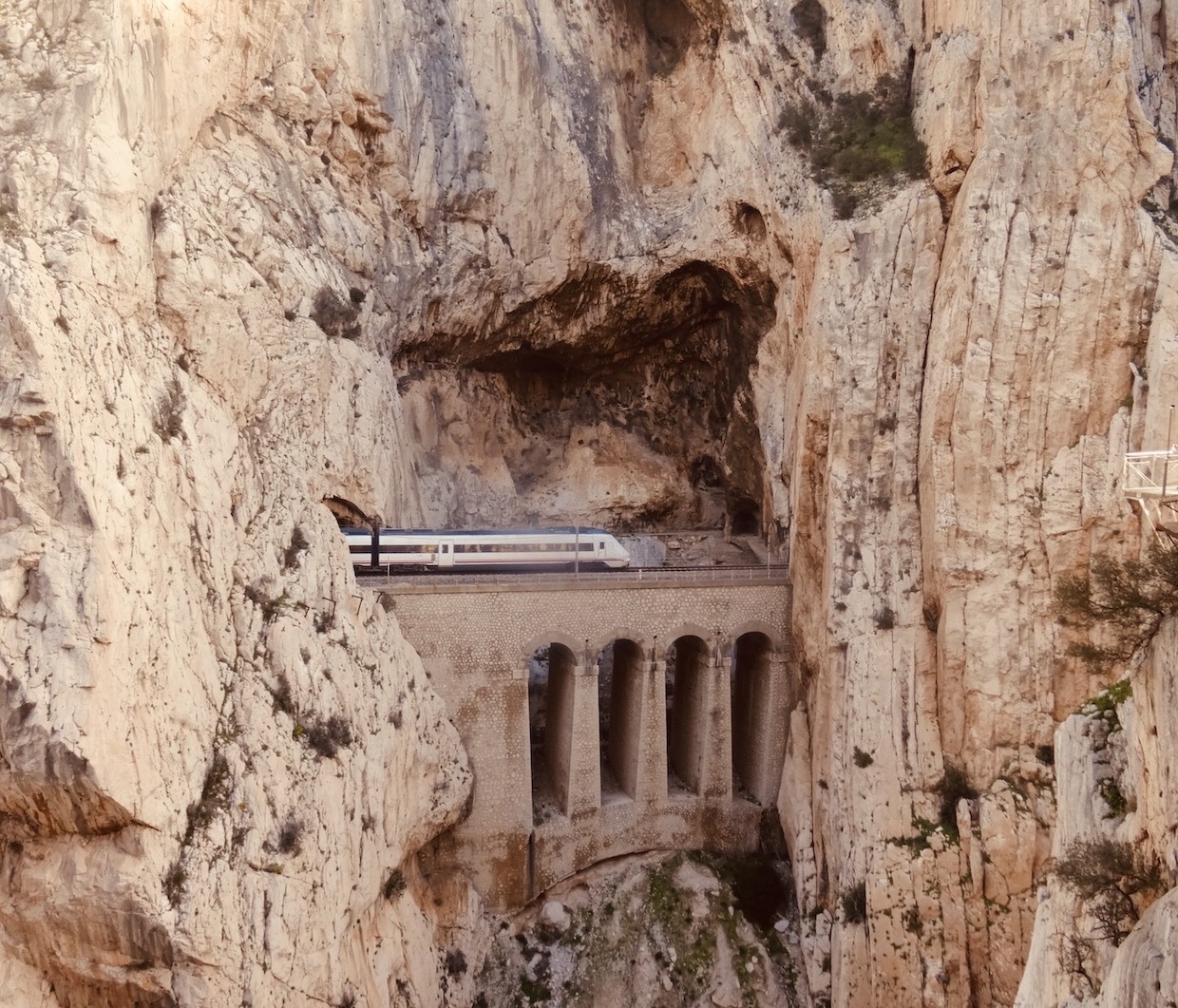 Now you see it, now you don’t.

I later found out that it was a high speed AVE train that covers the Malaga to Córdoba railway line. Yup, one of the stops is little old El Chorro Station.

At the end of the path, there are even more breathtaking views from the gorge’s biggest suspension bridge. It’s a fitting end to the pathway, before a staircase takes you down to a gravel road leading to the southern exit. 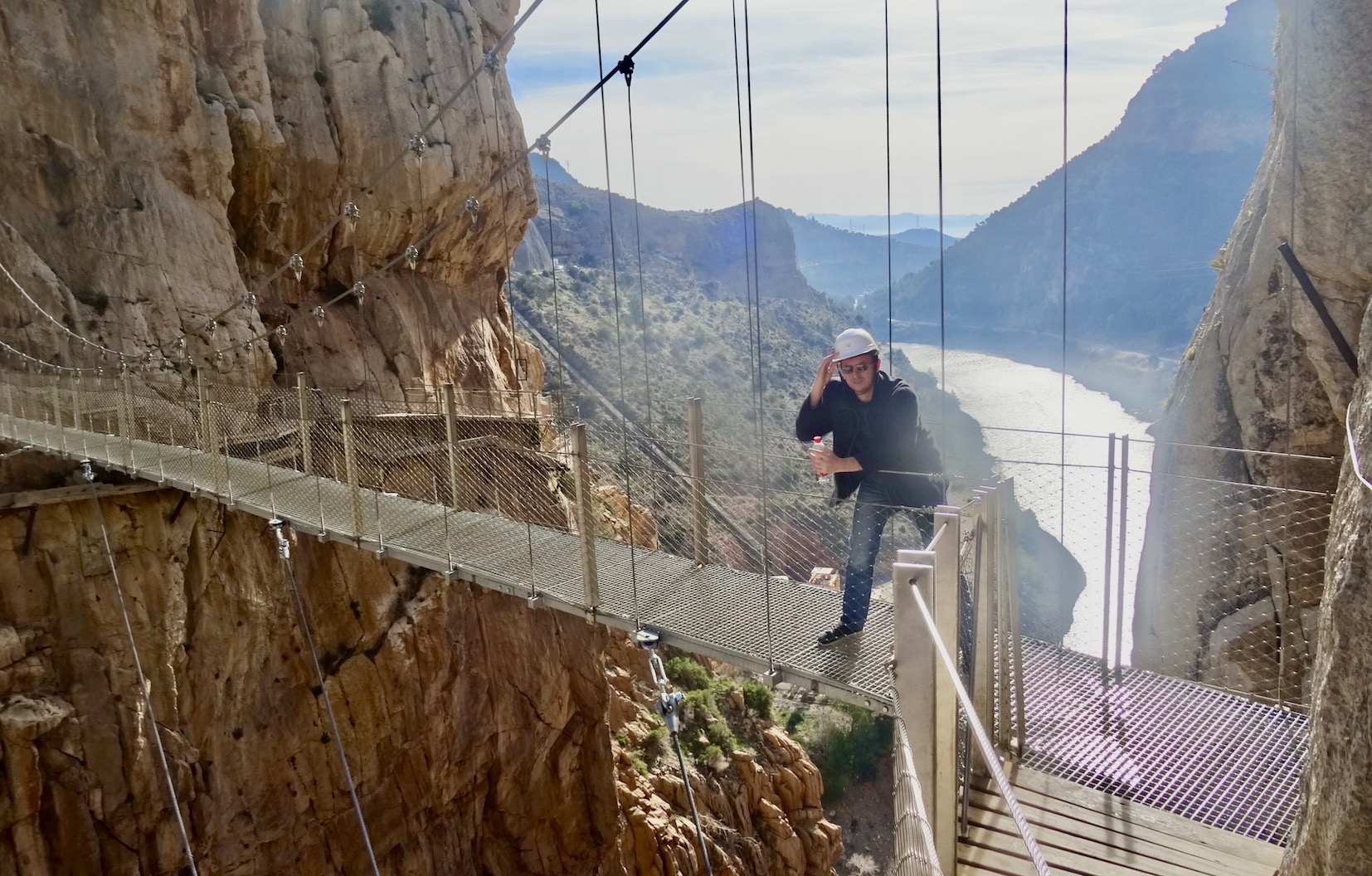 Fear not though, exiting the gorge doesn’t signal the end of the amazing views. You can look down on the pretty, green iron railway bridge and a tiny, secluded beach nestled on the banks of the river. 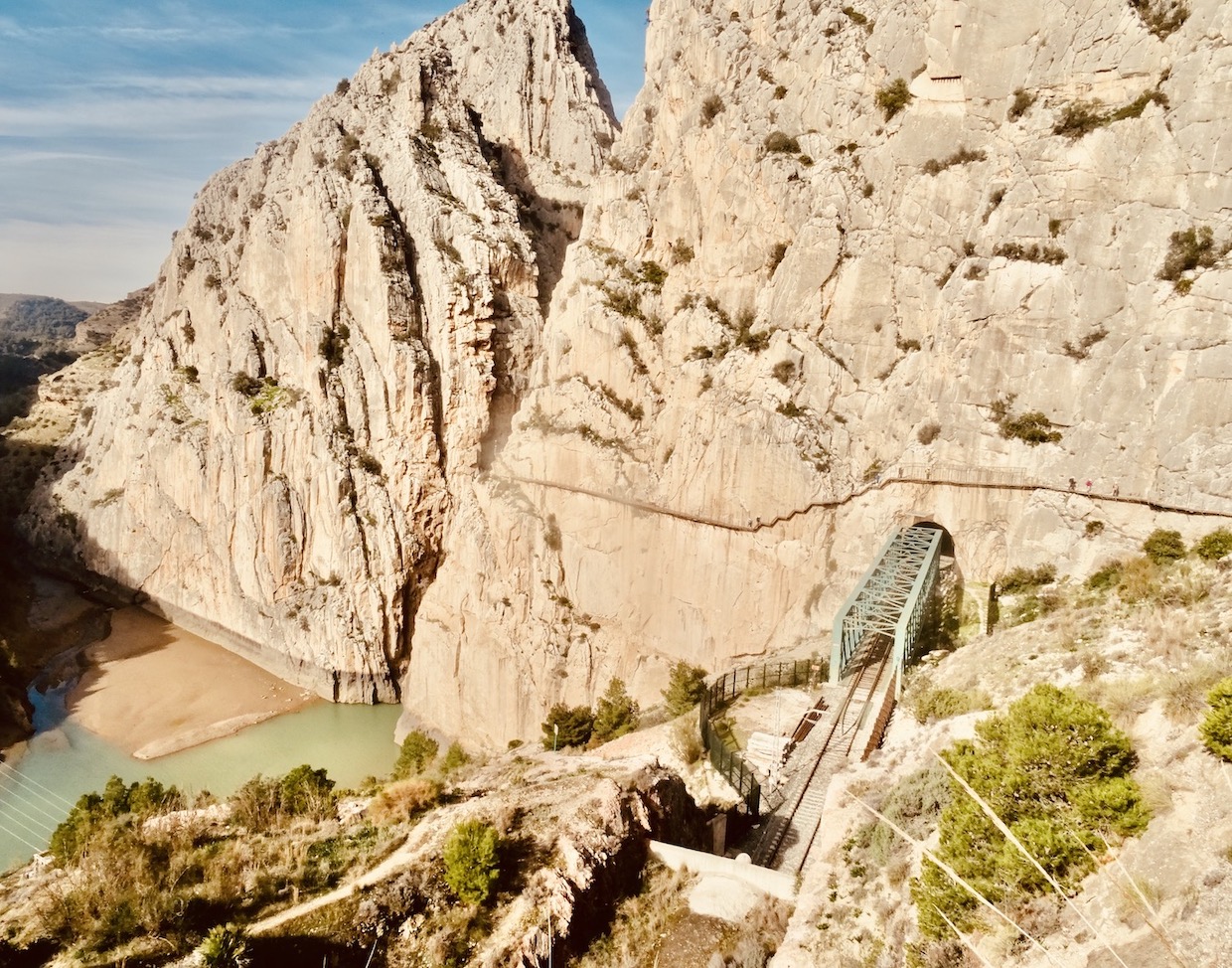 Several more rocky viewing platforms had us stopping for even more photo opportunities. Keep an eye out for the local bird life, which includes honey buzzards, griffin vultures and even the odd Golden Eagle.

A short while later we reached the office. As much as I’d enjoyed my experience, it was a huge relief to be rid of that damn helmet. 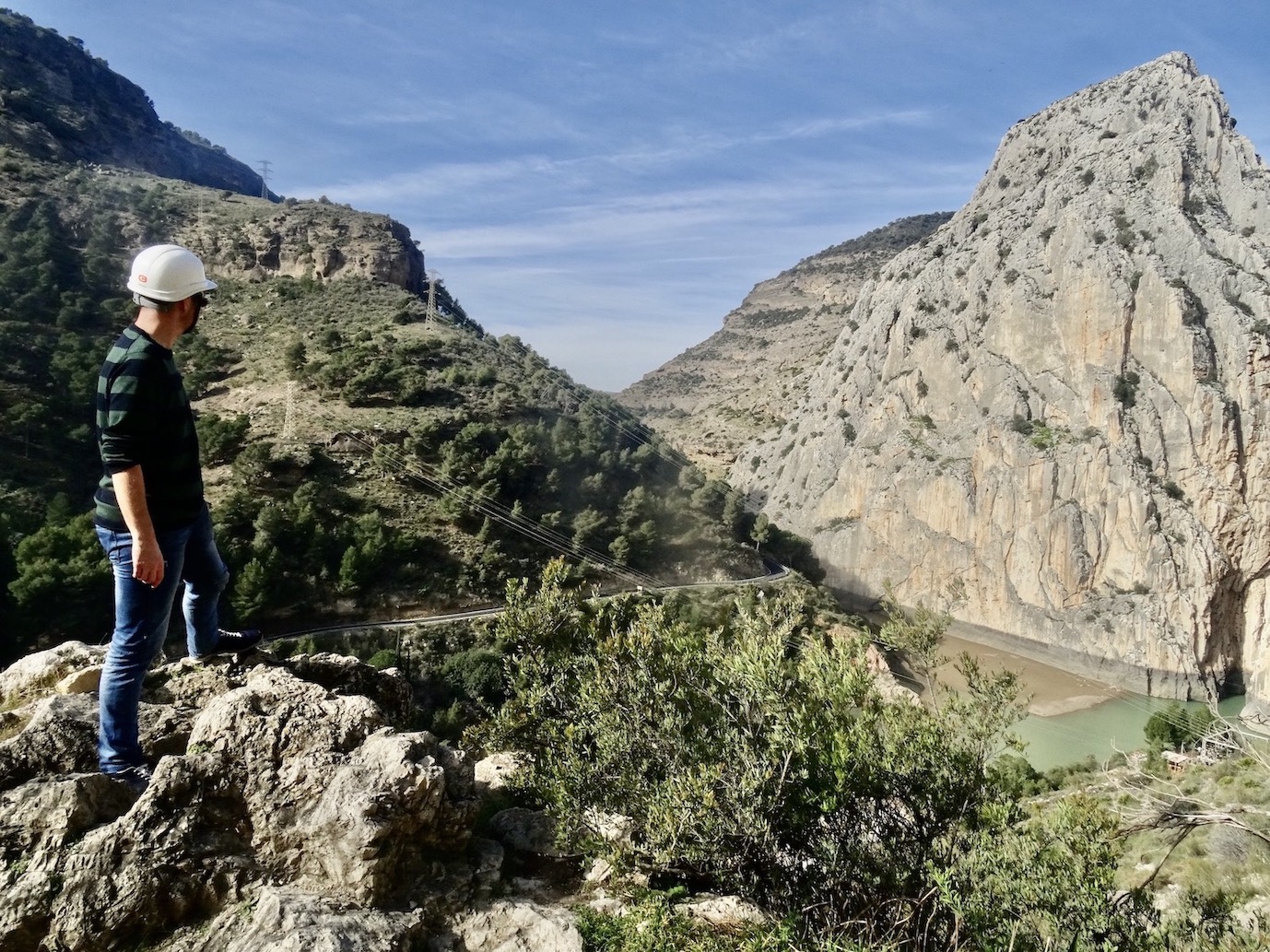 Hassan and I had built up quite an appetite. Luckily, there are loads of tavernas and cafeterías in and around the village. We ended up eating at Bar El Pilar, where the staff were friendly and the food was freshly cooked, delicious and head- scratchingly cheap. 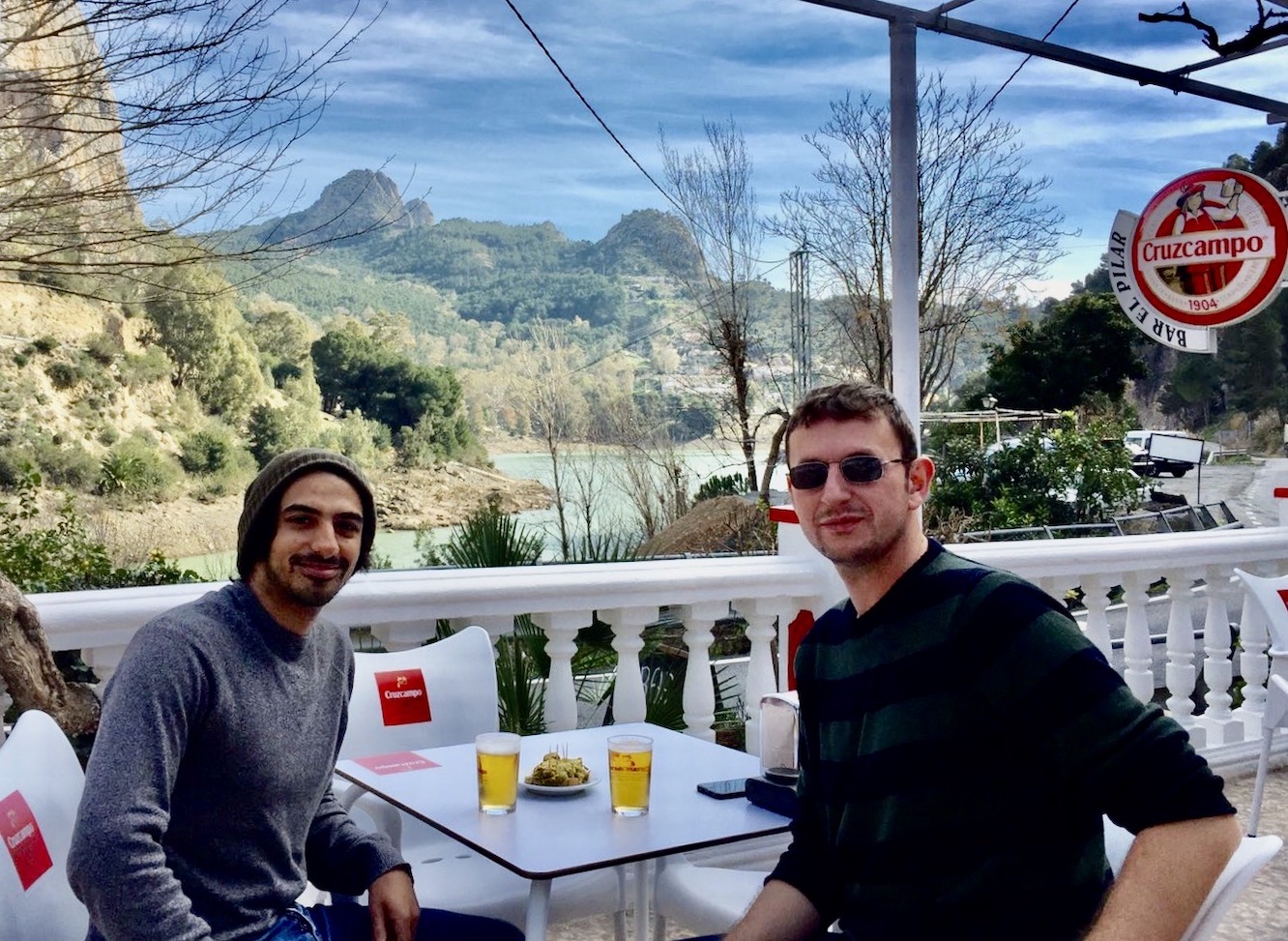 We ordered around ten tapas dishes, four small beers and a few slabs of strawberry and banana cheesecake. How the bill came to fifteen Euros, I’ll never understand. 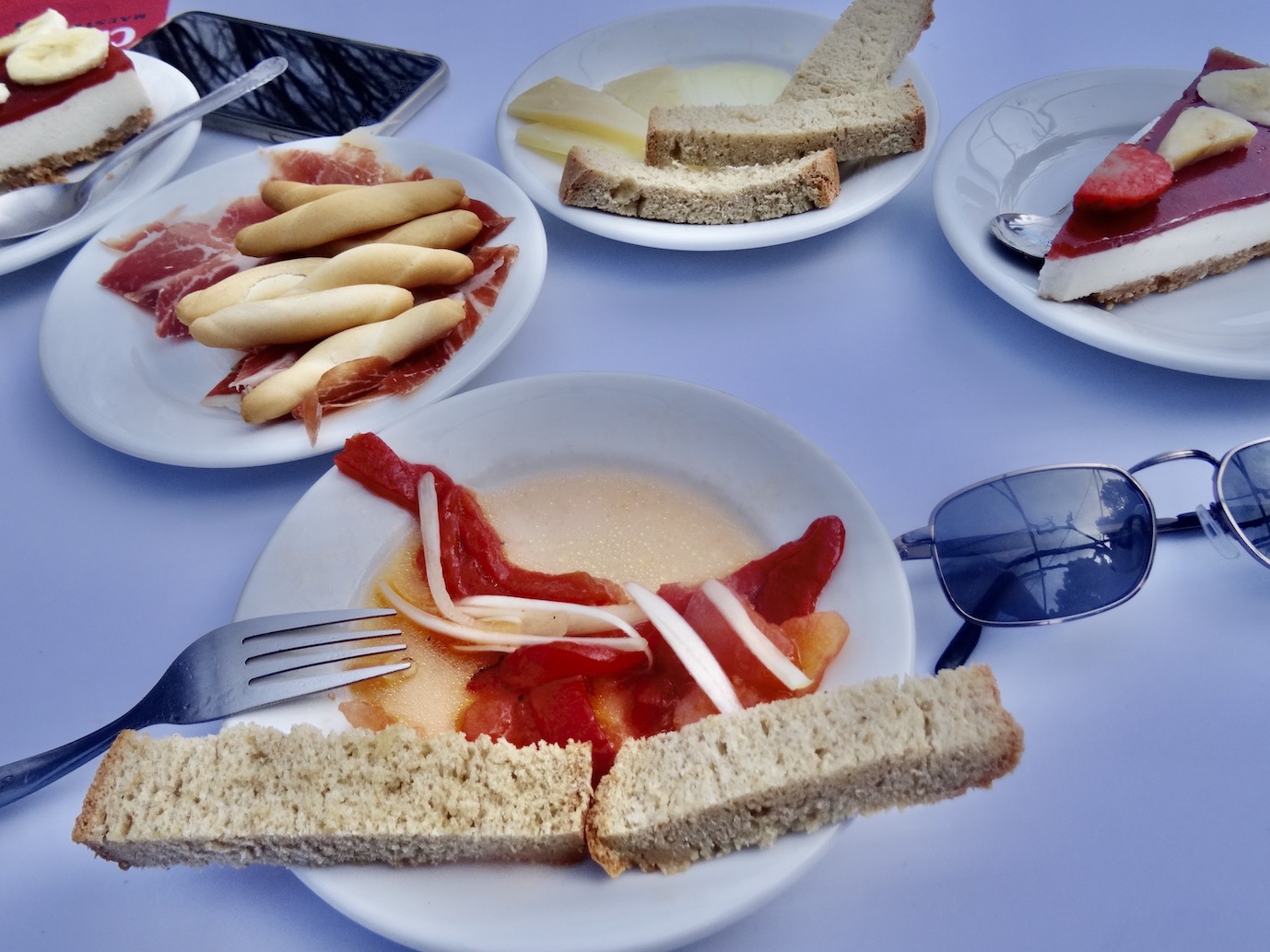