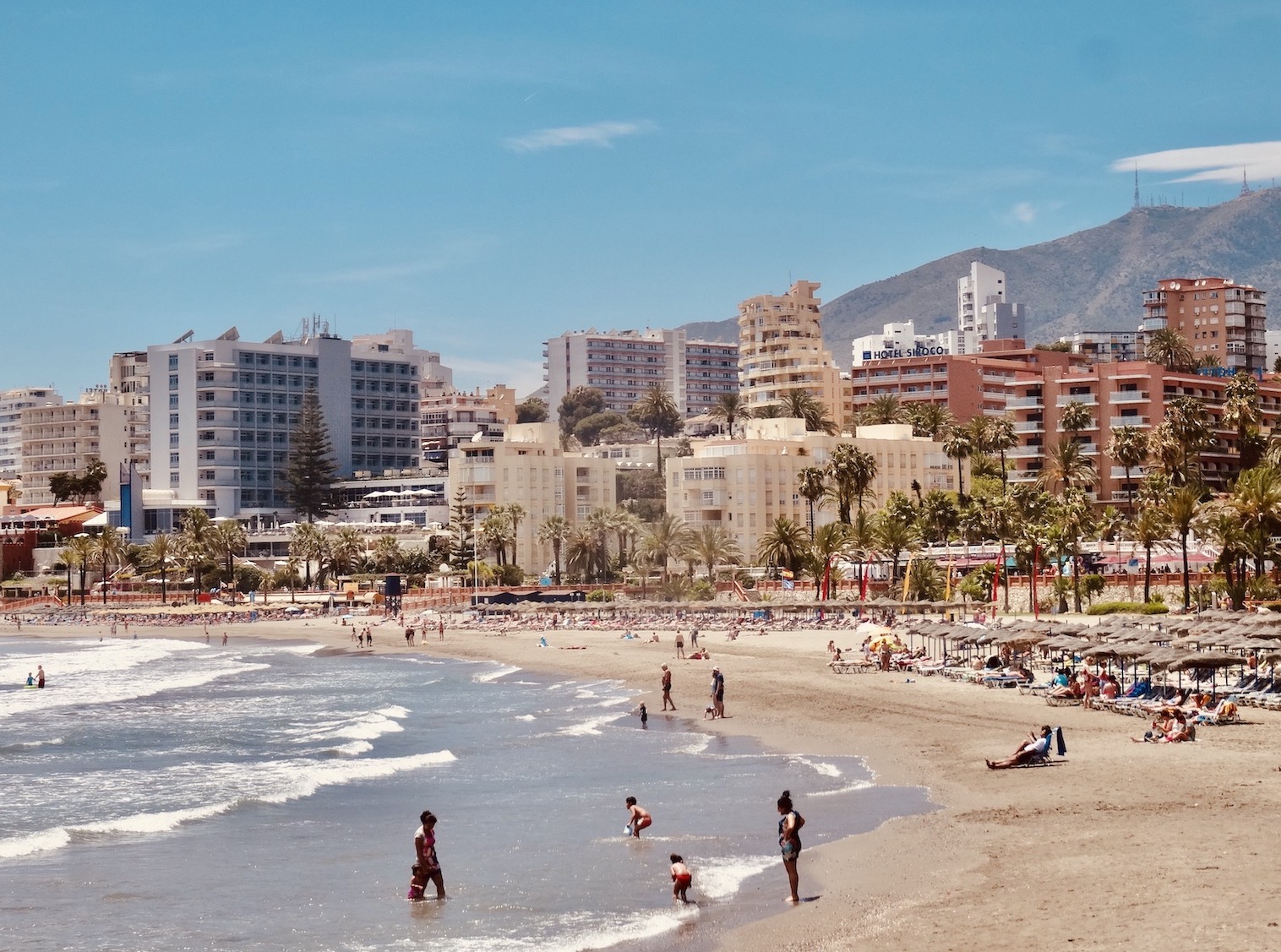 June 2016. It was a scorching hot summer afternoon when I set off on what I can only describe as an excursion of curiosity. So many people had told me not to bother with The Costa del Sol. That the entire coastal strip was a tourist trap devoid of Spanish authenticity. A place where, for the want of a better word, unenlightened British folk came to live their English lives in the sun.

Nevertheless, I felt fascinated by the prospect of seeing it for myself. Could it really be so bad? With the region’s towns and villages just a short train ride away from my home in the city of Malaga, I decided to go and have a look. For my first day trip, I opted for the town of Benalmadena. 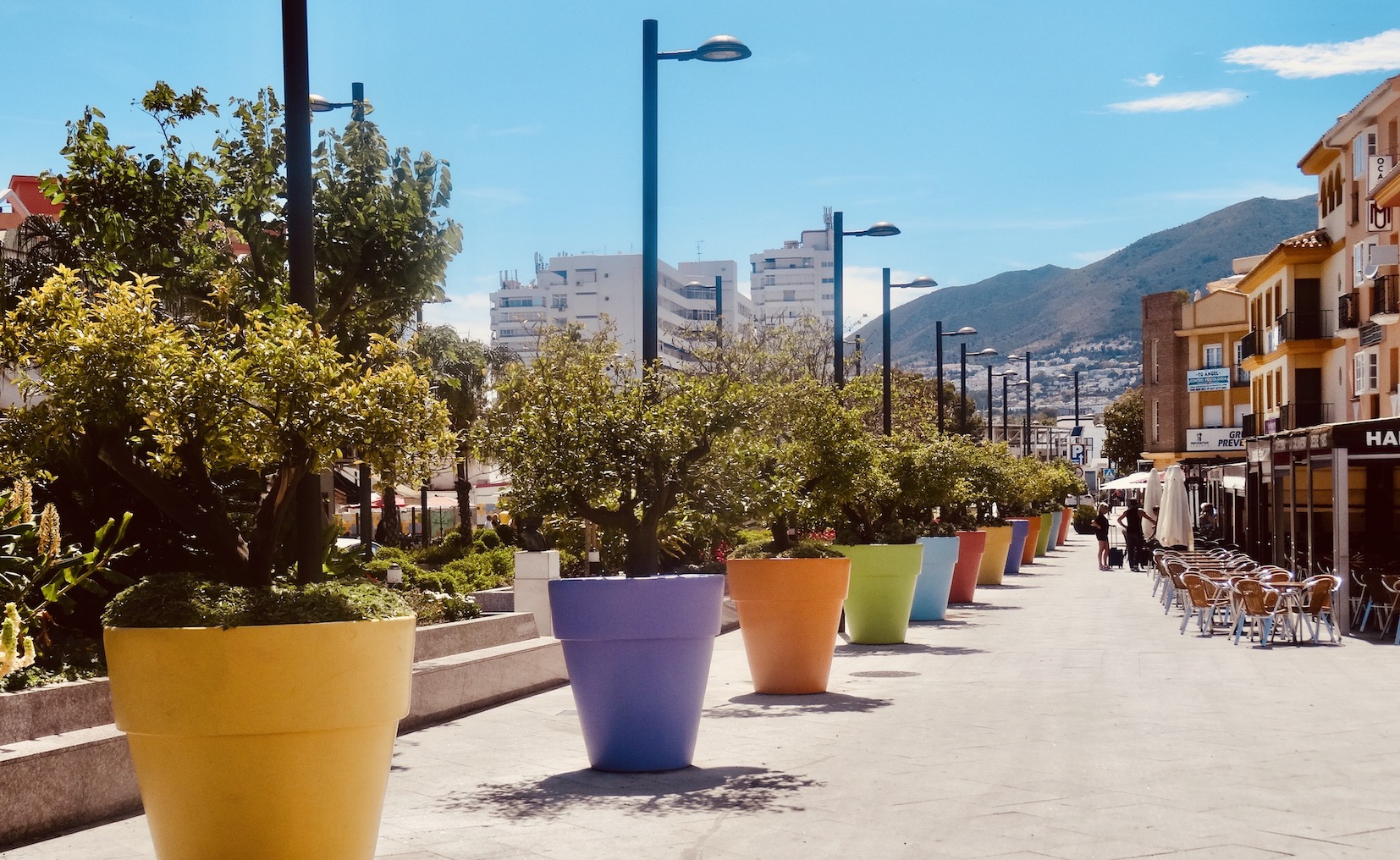 From María Zambrano railway station it was a brisk thirty two minutes on the train. When I emerged from the escalator, I found myself on Calle Mercurio, right in the heart of downtown Benalmadena.

My first impression was: Wow this is pretty nice. Especially with the row of trees in multicoloured flower pots shielding cafe customers from the busy road. 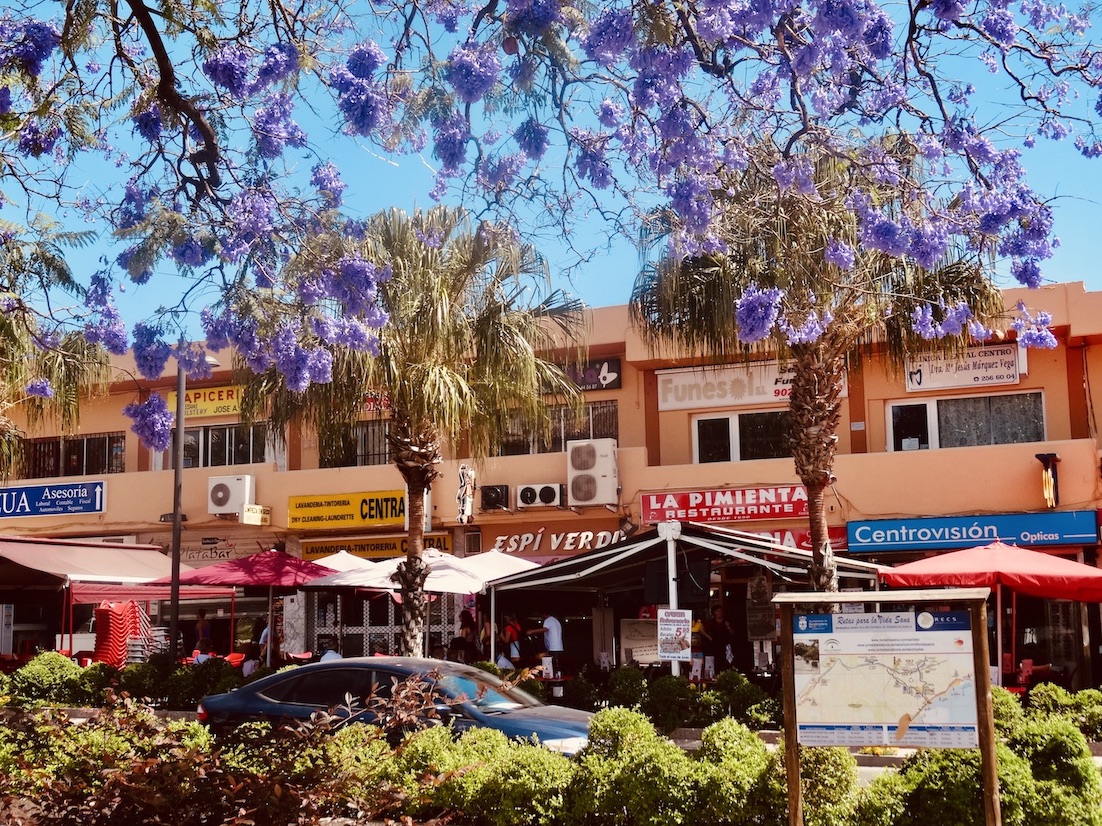 Moreover, the street was home to a gorgeous parade of flowering jacaranda trees. As I walked, I could immediately see how everything was geared towards British tourists and expats. Outside a cafe, for example, a middle-aged man sat working through an English breakfast. A copy of the day’s Independent Newspaper folded up next to his coffee.

At that point I’d already been living in Malaga for three months. Hence it was weird to see so many businesses with English names. Virtually every cafe did an English breakfast, while I also passed a newsagents selling British snacks and a pie and mash shop called Porky’s. 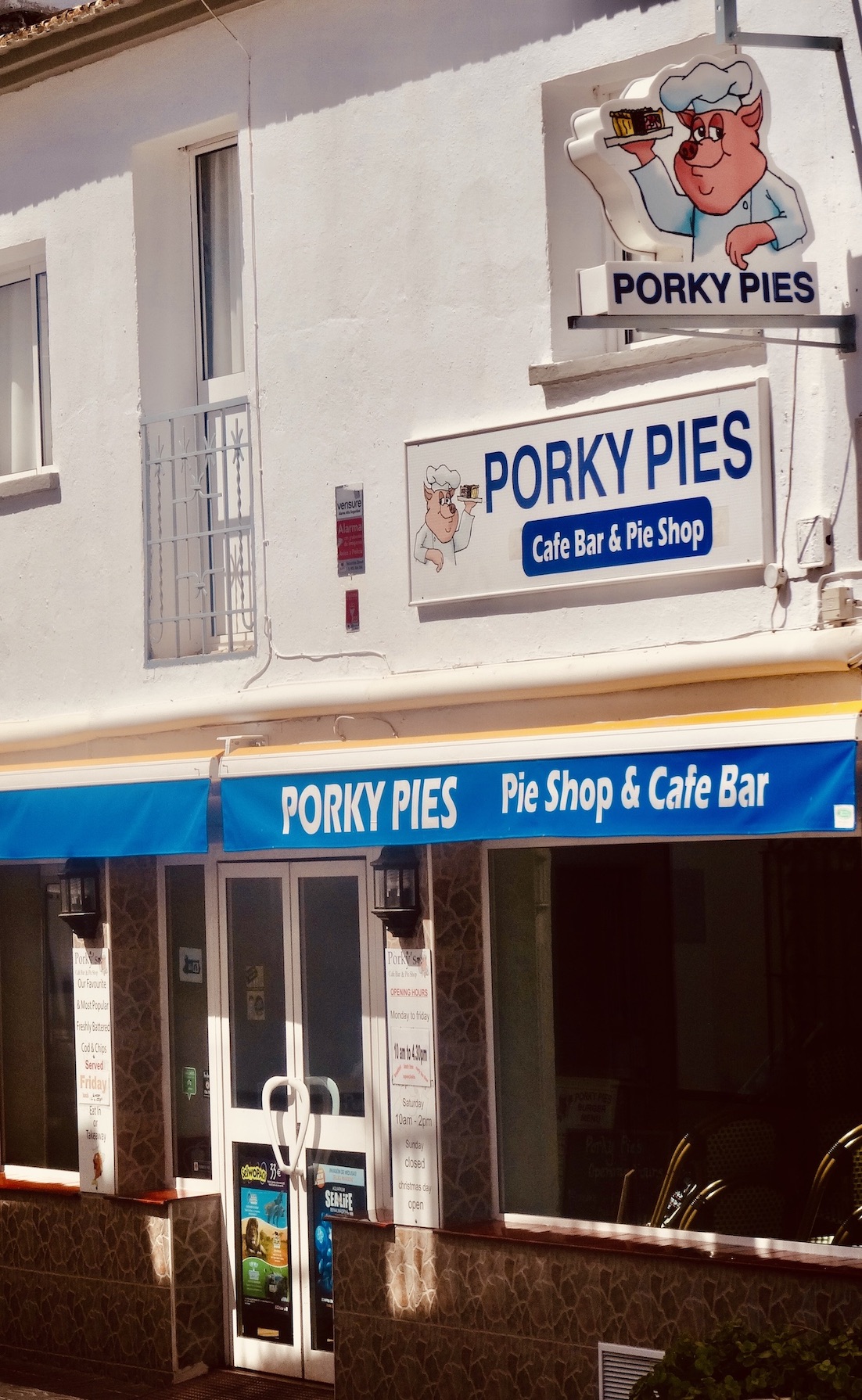 Somehow, in my mind’s eye, I had imagined myself landing in some hellish episode of EastEnders. Rather, a peaceful vibe prevailed with, for the most part, people keeping themselves to themselves. So far so good.

Keen to make my way towards Benalmadena’s beaches, I mapped out a walking route that led me down the long, descending Avenue Federico Garcia Lorca. I remember thinking, Damn, this is gonna be hard work on the way back up. About halfway down, I found myself walking alongside a giant park. 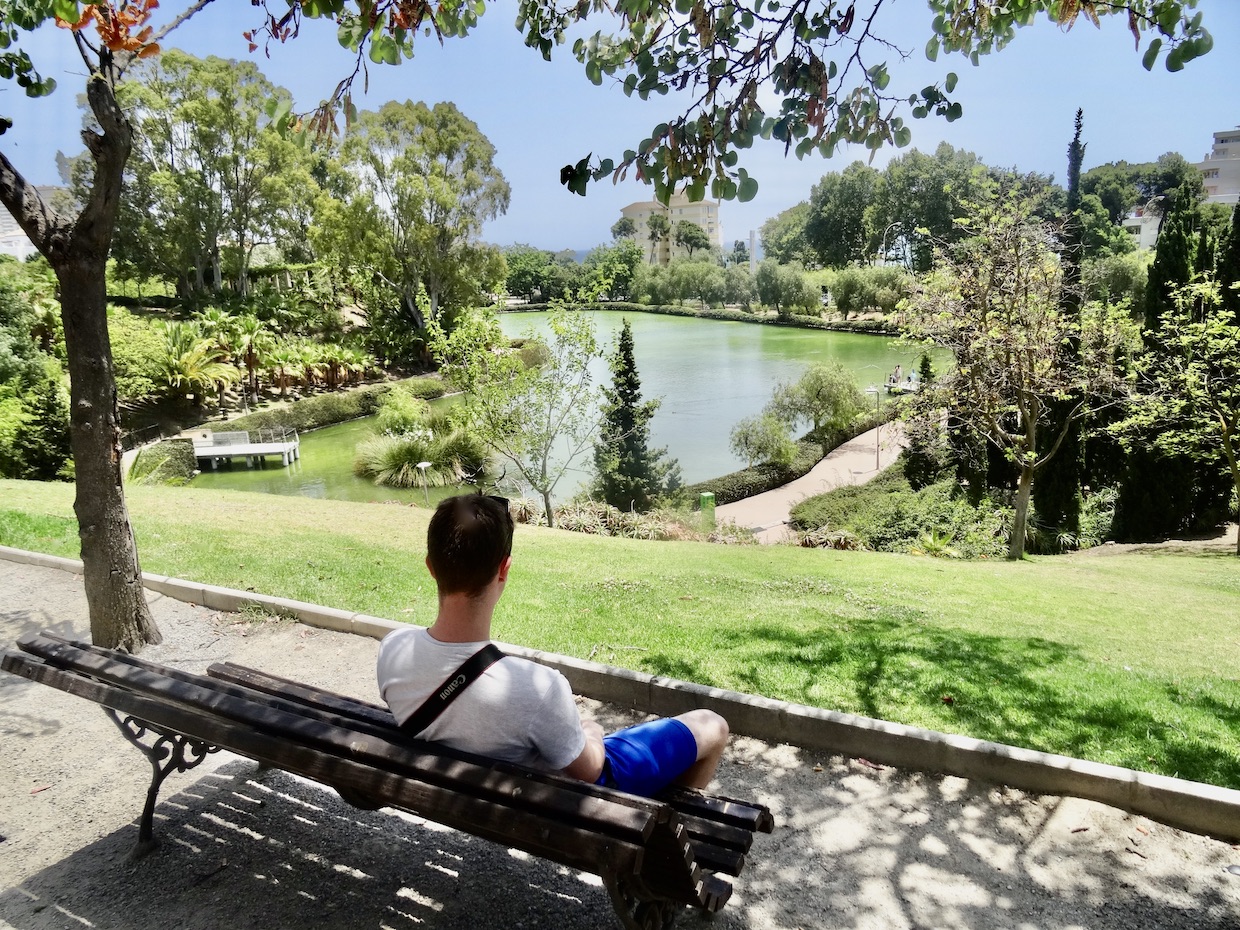 Naturally, I decided to duck in for a look. Opened in 1995, Parque de la Paloma has scooped numerous Spanish landscaping awards. In 2014 it even made TripAdvisor’s list of Europe’s best 25 parks. A huge man-made lake lies in its centre, home to carp, turtles, ducks and swans. 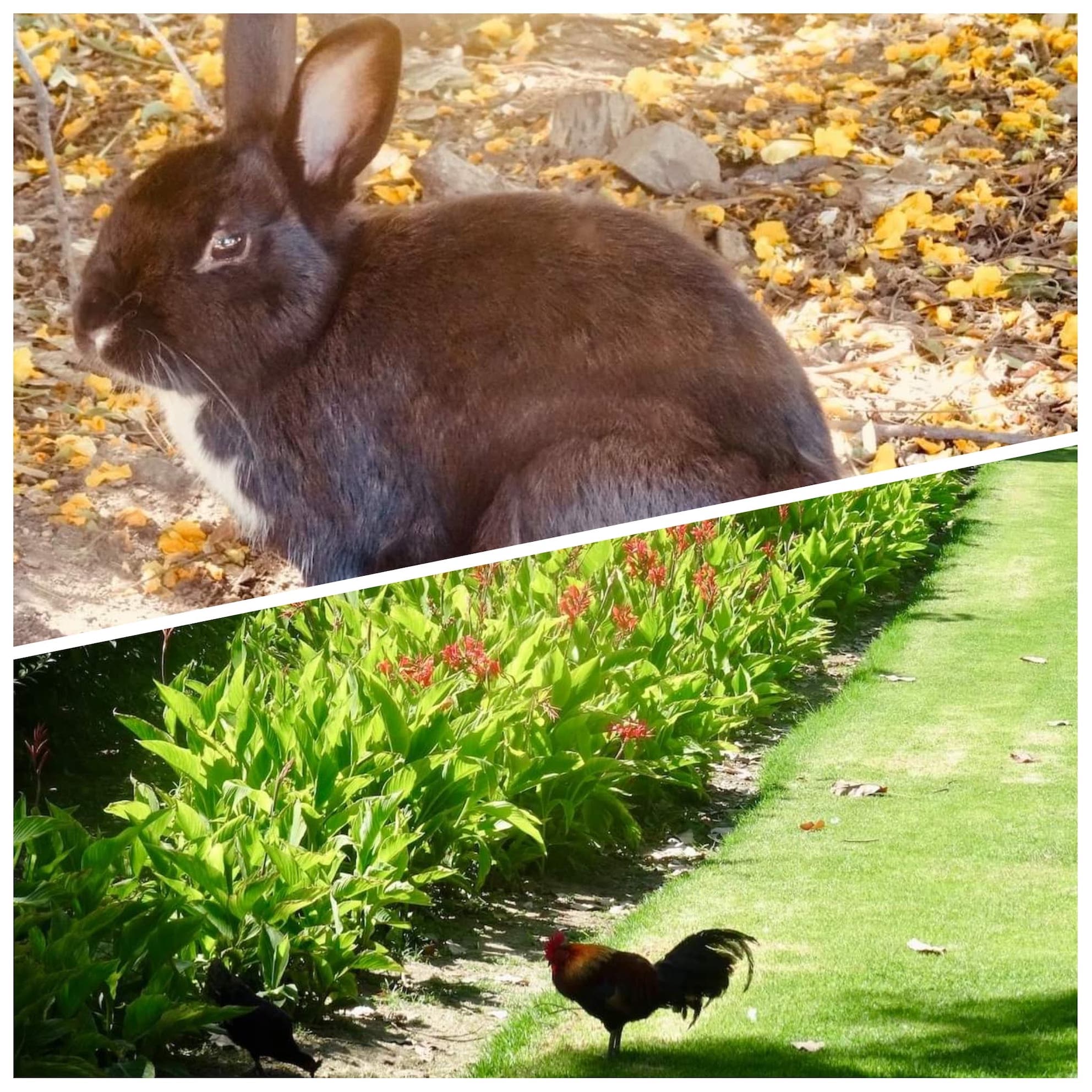 And it’s not just around the lake that you can find an abundance of animal life. Because the park is also home to a makeshift animal sanctuary run by the local council. What’s more, many of the beasts roam freely and are quite tame.

As I strolled around, there were cats napping under trees, roosters and chickens pecking away at plants and the occasional rabbit darting across the path. From what I understand, there are also peacocks, emus, guinea pigs and a couple of donkeys. 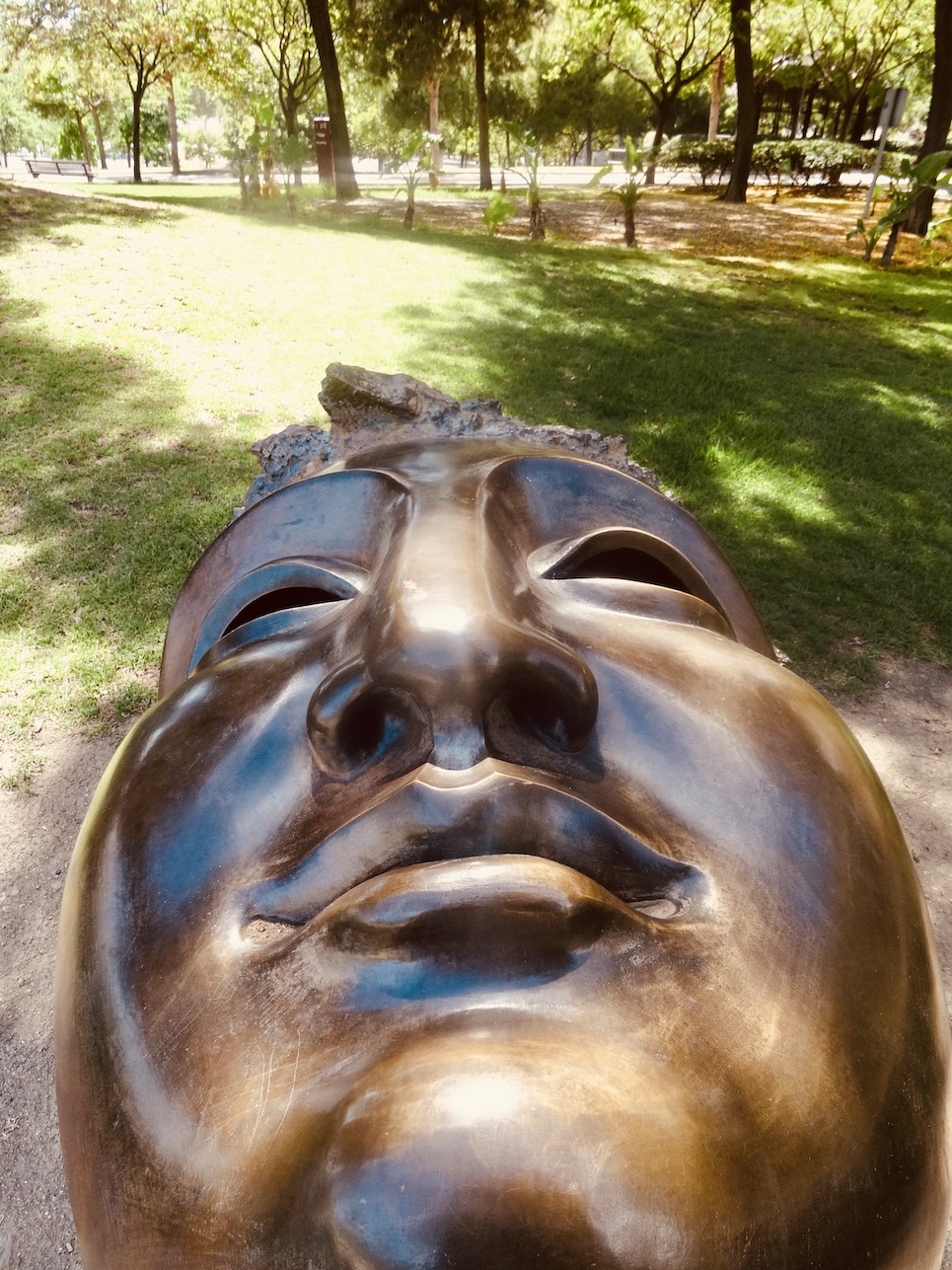 Elsewhere, I stumbled upon three bronze head sculptures made by the Malaga born artist José Seguiri. Originally, the artist installed them at Benalmadena’s marina, before local authorities added them to the park in 2001. Each of the heads bear the sculptor’s signature. 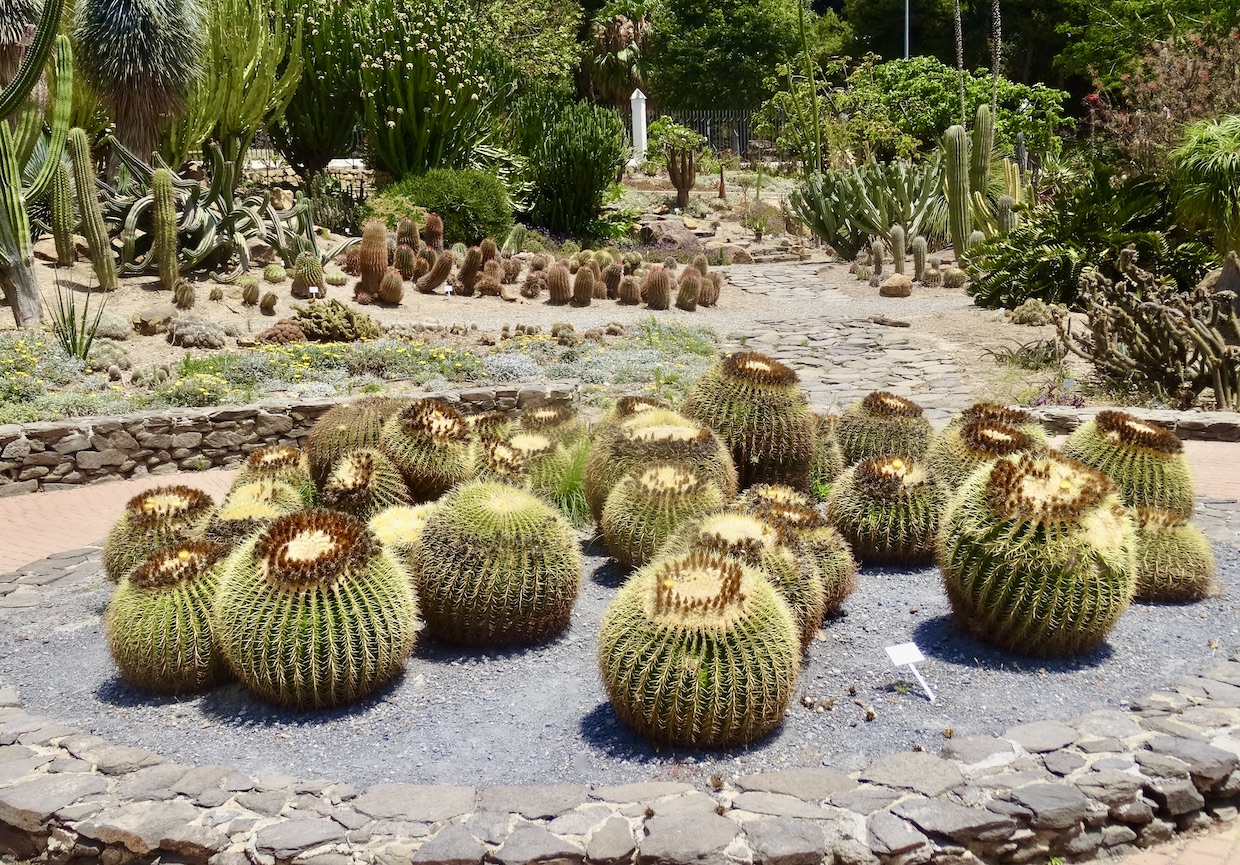 I certainly wasn’t expecting to come across one of Europe’s finest cactus gardens! And yet that’s exactly what this compact space is, with over 2000 cacti from 450 species on display. Carefully nurtured and maintained, look out for the little signs that tell you their name, age and country of origin. 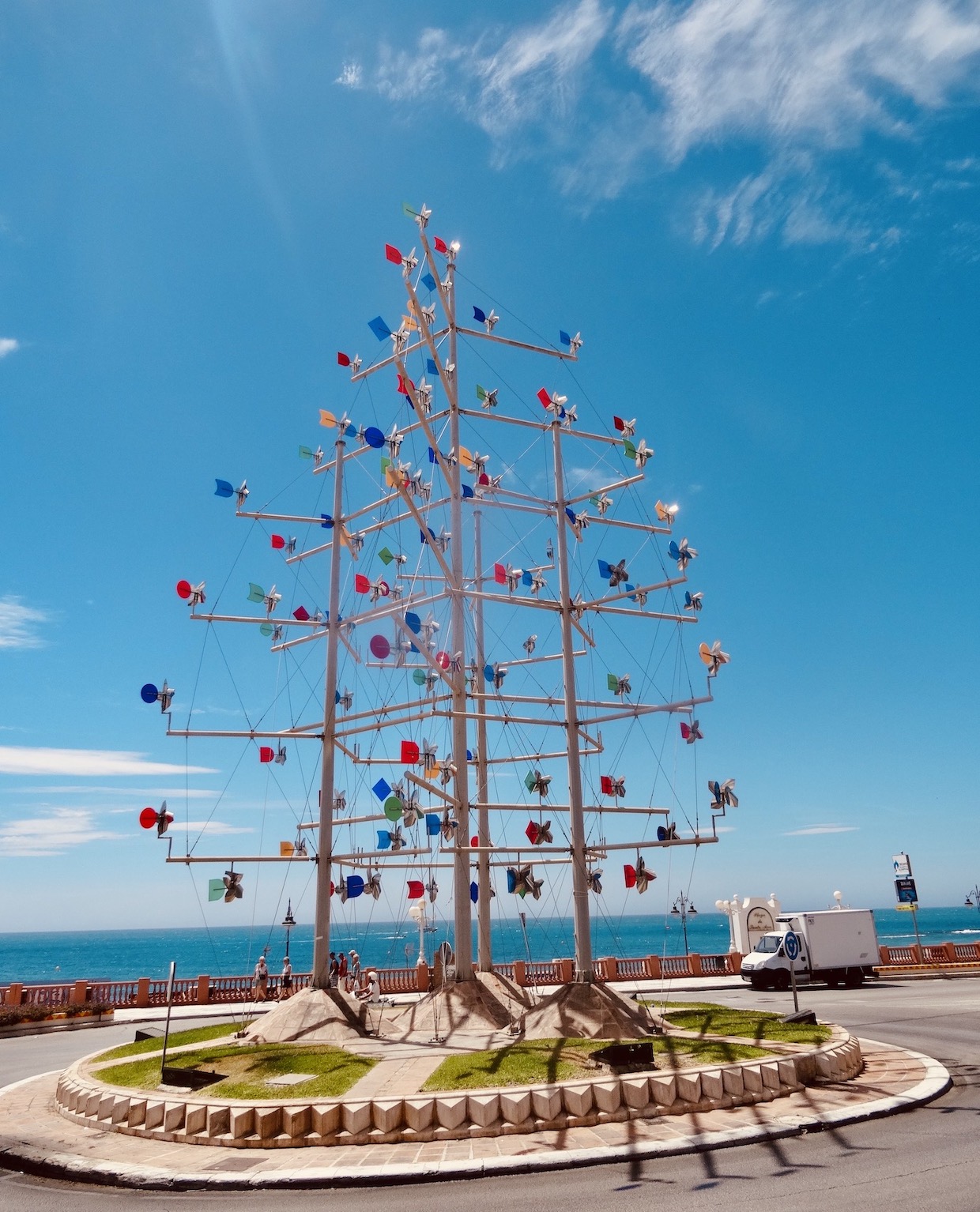 Quite suddenly, I realised that I’d been strolling around the park for over an hour. Thus I headed back to the main road and resumed my mission, following the sound of the crashing waves. Just before reaching the first beach, I paused for a moment to admire the endearing Windmill Roundabout.

This metal sculpture is pleasingly curious, especially when its 100+ little windmills catch the breeze and spin around together in wild unison. 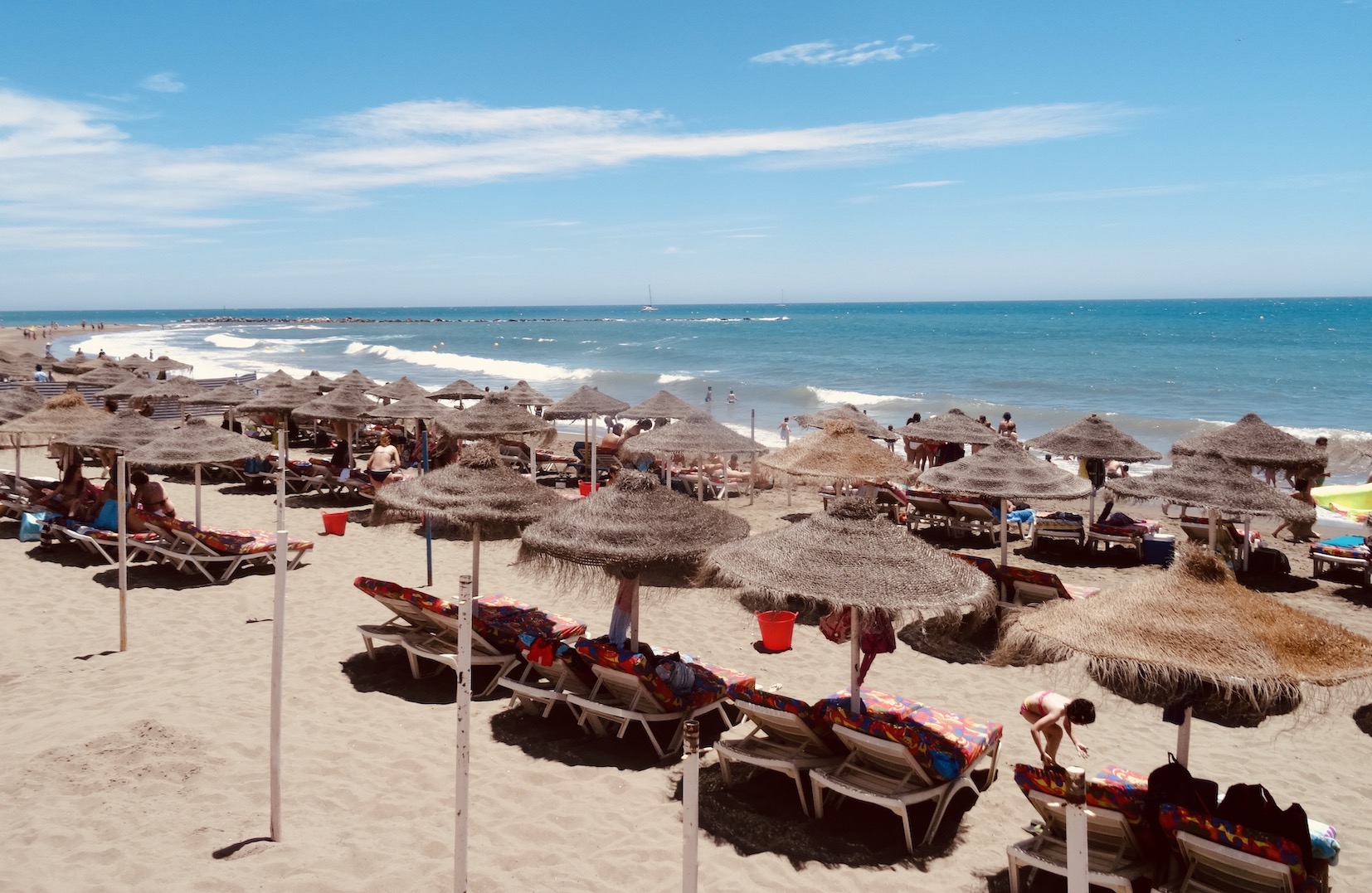 I was just beginning to think how wrong everyone had been when I crossed the road and arrived at Bil Bil Beach. Oh, was all I could think as I gazed across the tightly packed rows of sardine tin parasols. Call me spoilt after my years exploring some of Asia’s most fabulous beaches, but to me this was wholly unremarkable.

In any case I hadn’t come to sunbathe, so instead I pressed on for a look at the nearby Castillo de Bil Bil. A French businessman by the name of Leon Hermann had the place built in 1927 as his own private residence. 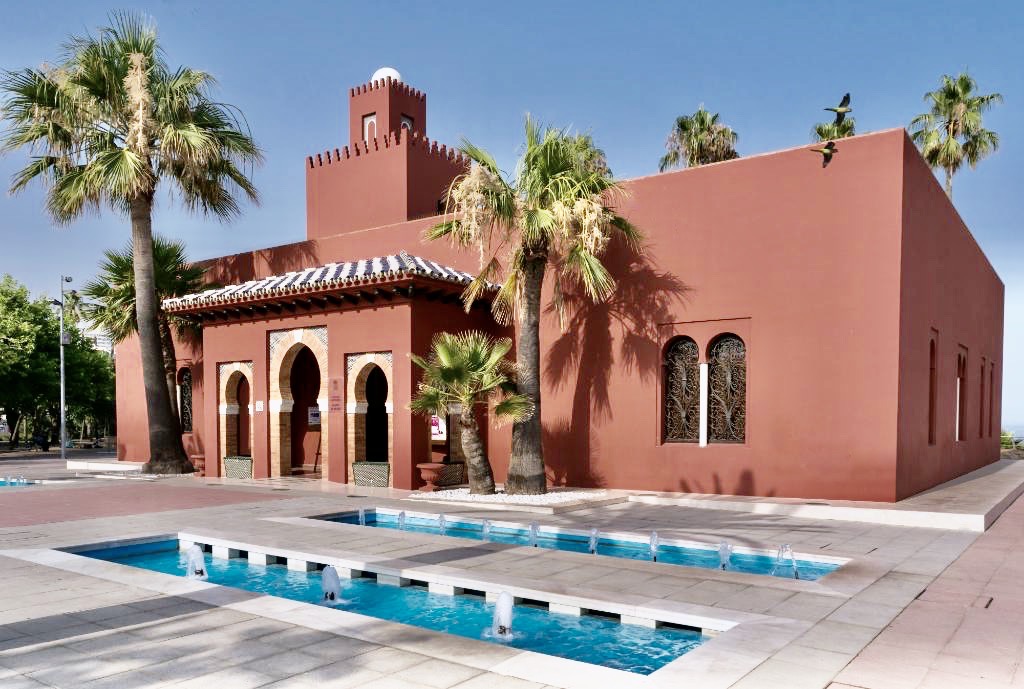 Sadly, the outbreak of The Spanish Civil War ensured he never got to live in it. Later, an American family resided here until it eventually fell into the hands of the local council.

They call it a castle, but actually this is a diminutive, five-room building. Undeniably alluring, with its deep red colour and Arabic tiles, today it stands as a cultural centre and is the region’s most popular civic wedding venue. 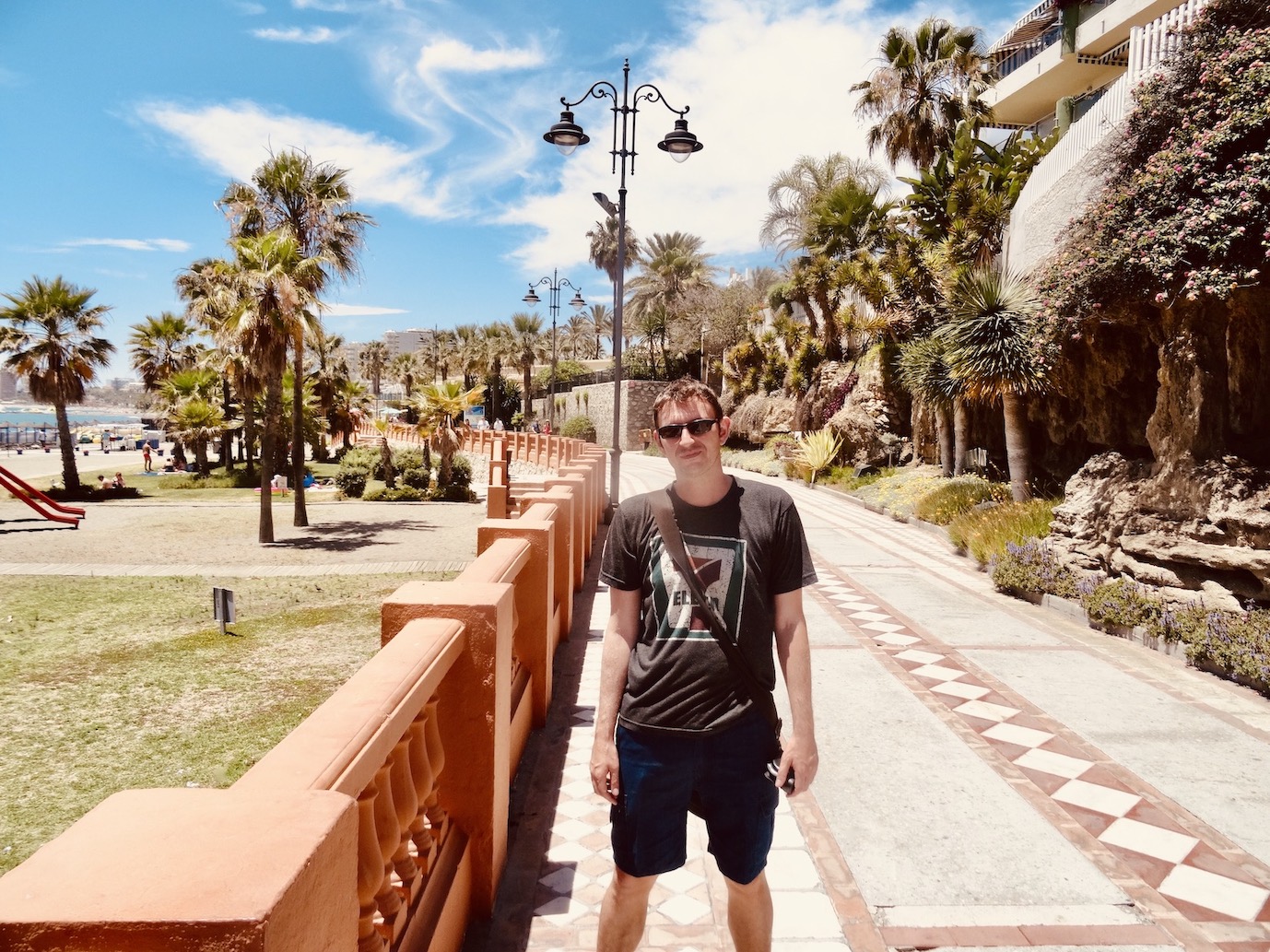 From the so-called castle I walked alongside the beach on the handsome Paseo Maritimo, aka Benalmadena Promenade. Built in the 1970s, the walkway is home to several sea view hotels and plenty of restaurants, bars and souvenir stores. 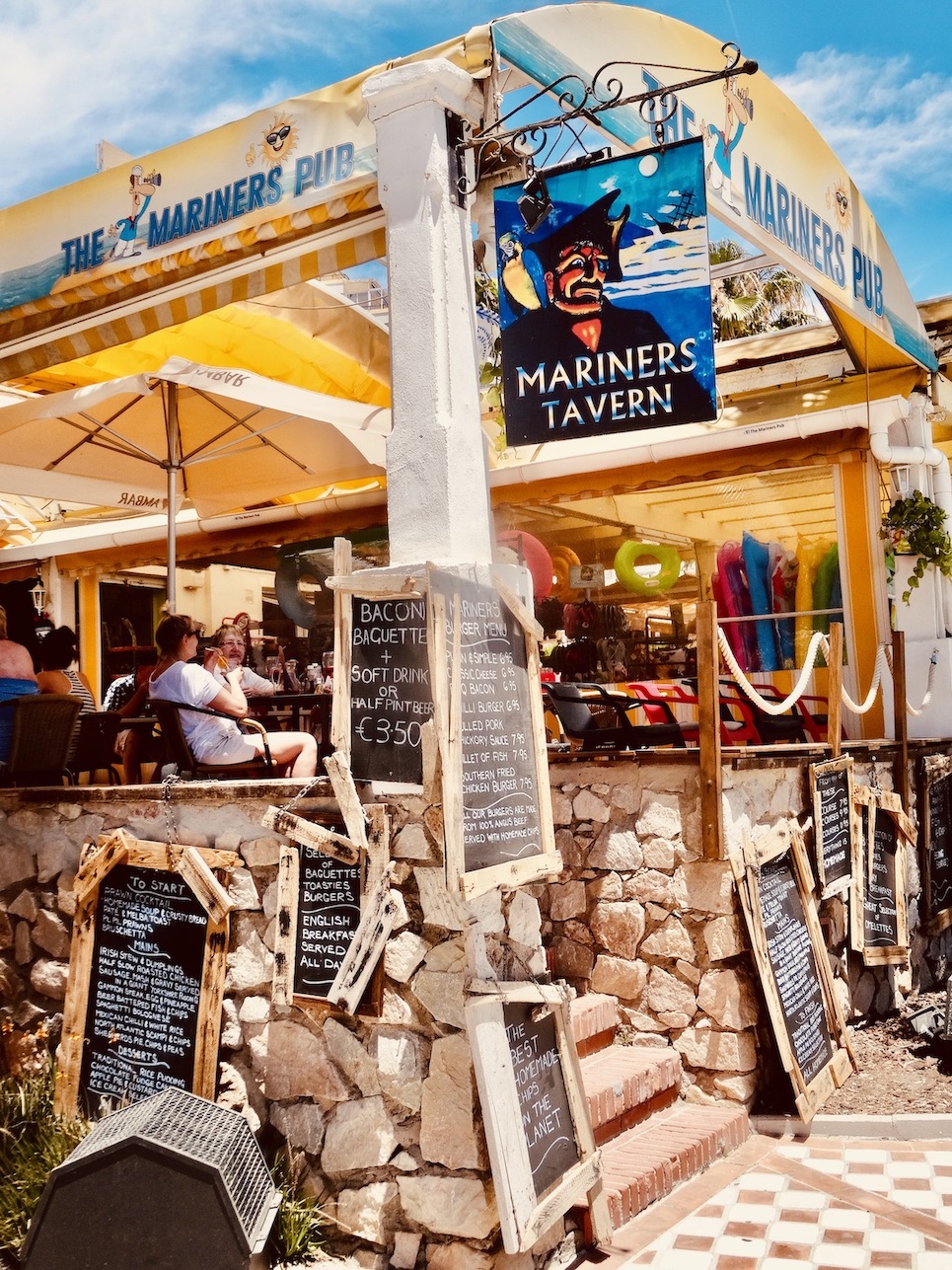 After a while, the crowded Bil Bil Beach gives way to the prettier and less populated Santa Ana Beach. This cleaner view of the sands and sea was definitely a marked improvement. 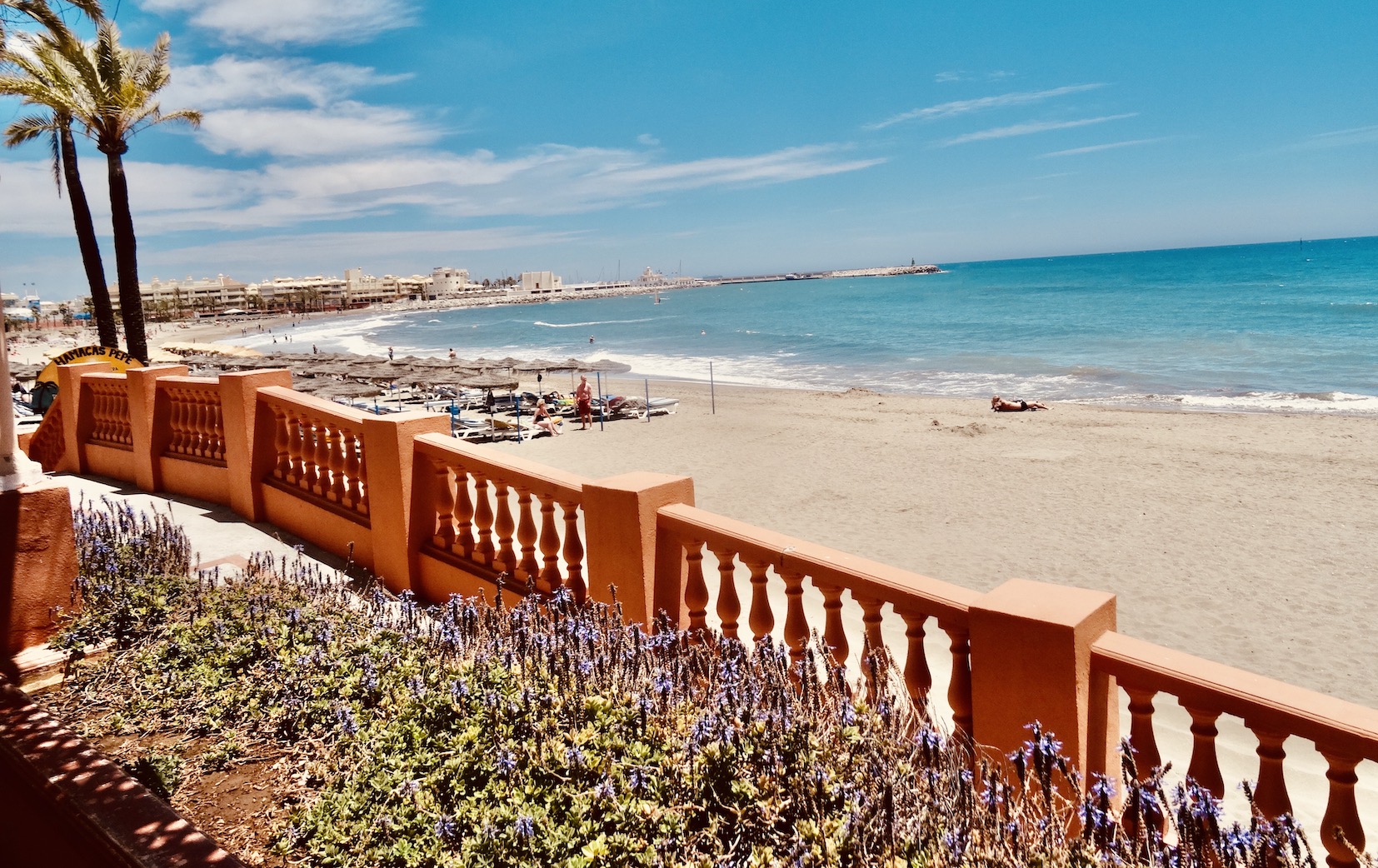 Nevertheless, those pesky hat and sunglasses salesmen still managed to find the few sunbathers who’d worked so hard to get away from everyone on the main drag. 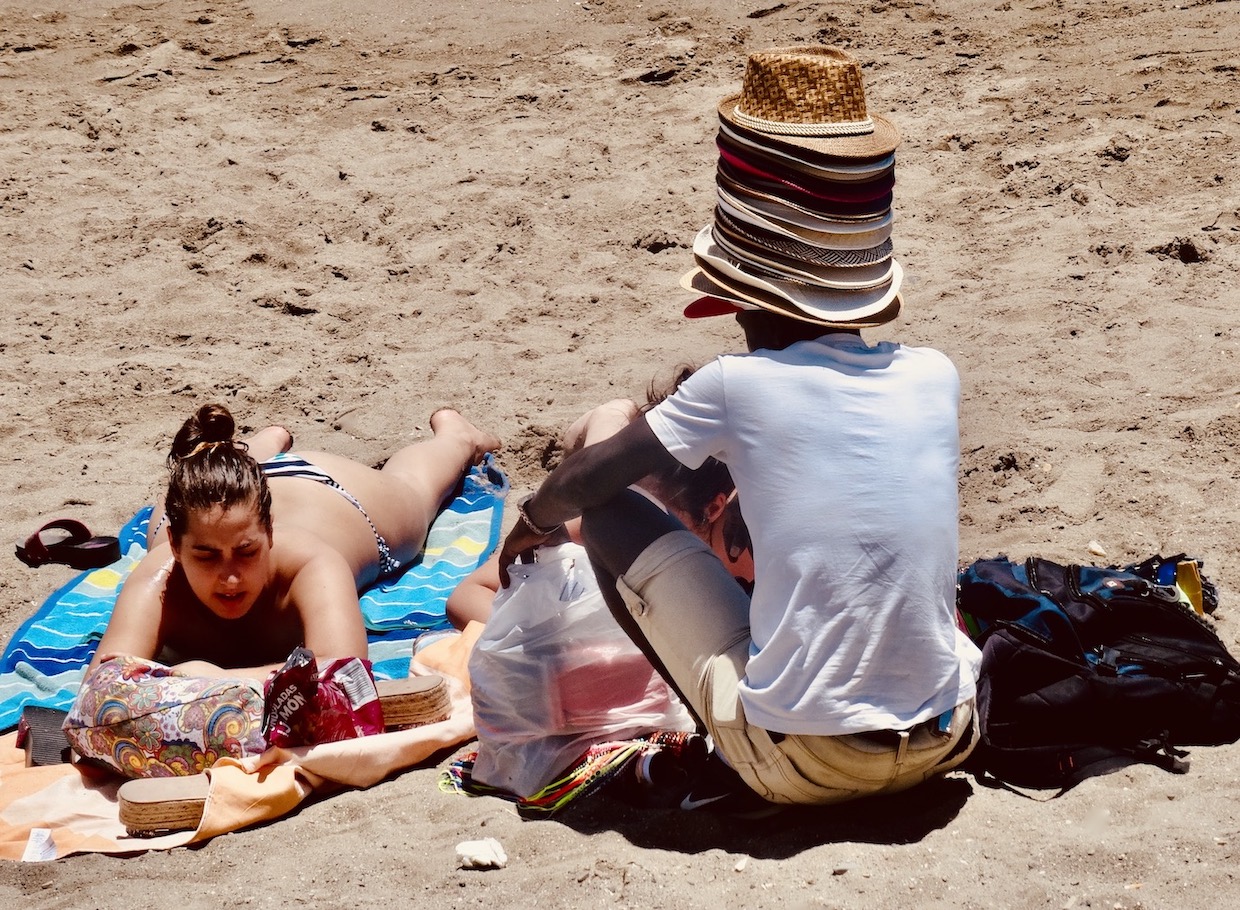 A small but pretty park lies at the far end of Santa Ana Beach. There’s not much to it, just a children’s playground, a cafe and yet more souvenir stalls.

By this point I was actually getting into the Benalmadena vibe, so I decided to do a very un-Leighton thing and buy a hat. It was my first and last hat of any kind and I lost it three days later. #RIP 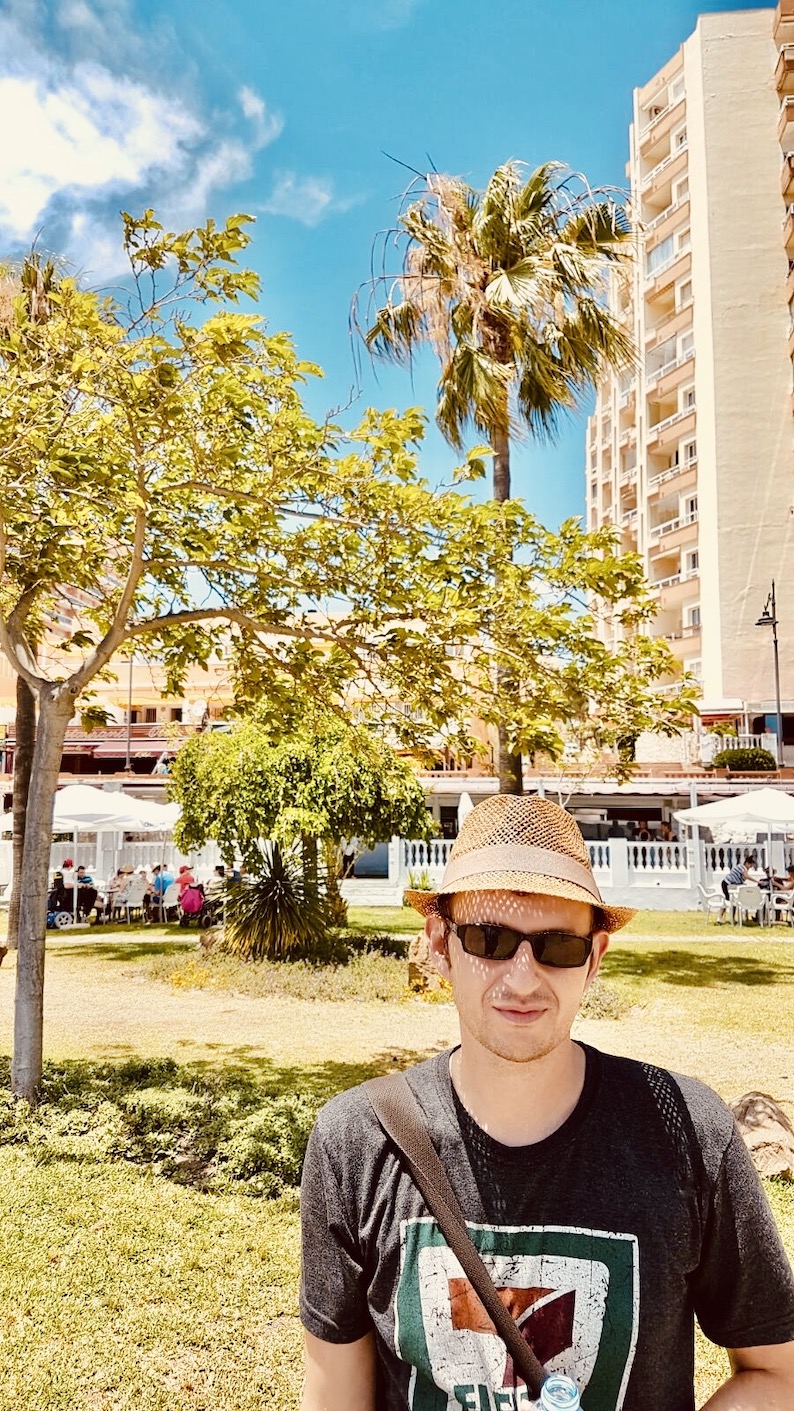 As a town that caters exclusively to tourists, expats and their families, Benalmadena has a handful of major attractions. Down by the marina, there’s the huge Sea Life Aquarium.

The town is also home to a  major theme park, Tivoli World. With absolutely no interest in either, I made do with a stroll around the very impressive marina. 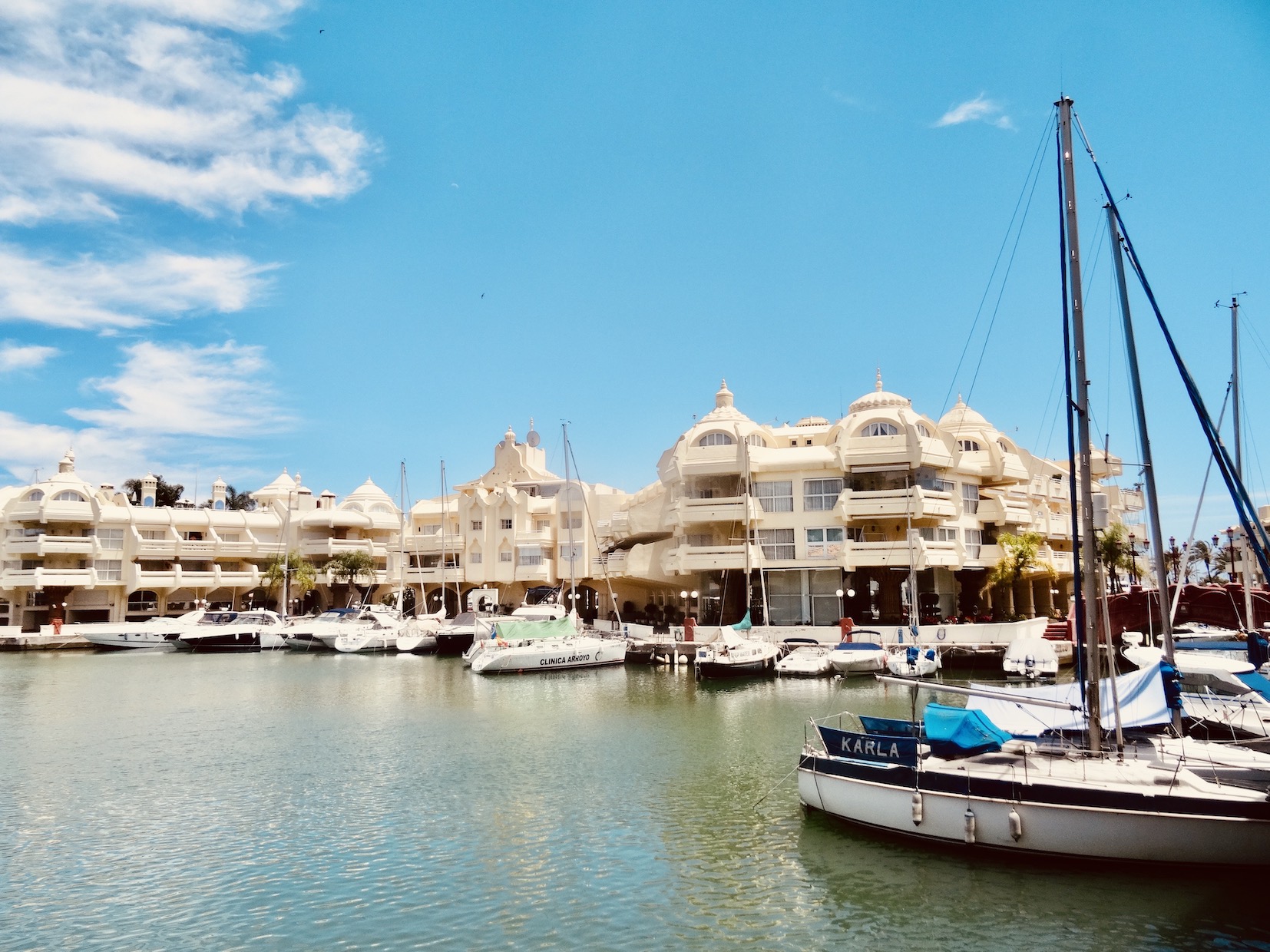 With swanky apartments and equally fancy private yachts, Benalmadena Marina has twice been named Best Marina in the World. It was so calm I decided to stop at a sleepy cafe, where I ordered a horribly overpriced Coca Cola.

According to the waiter, there are over a thousand boats moored here, while he also pointed me around the corner where there’s a water sports centre. 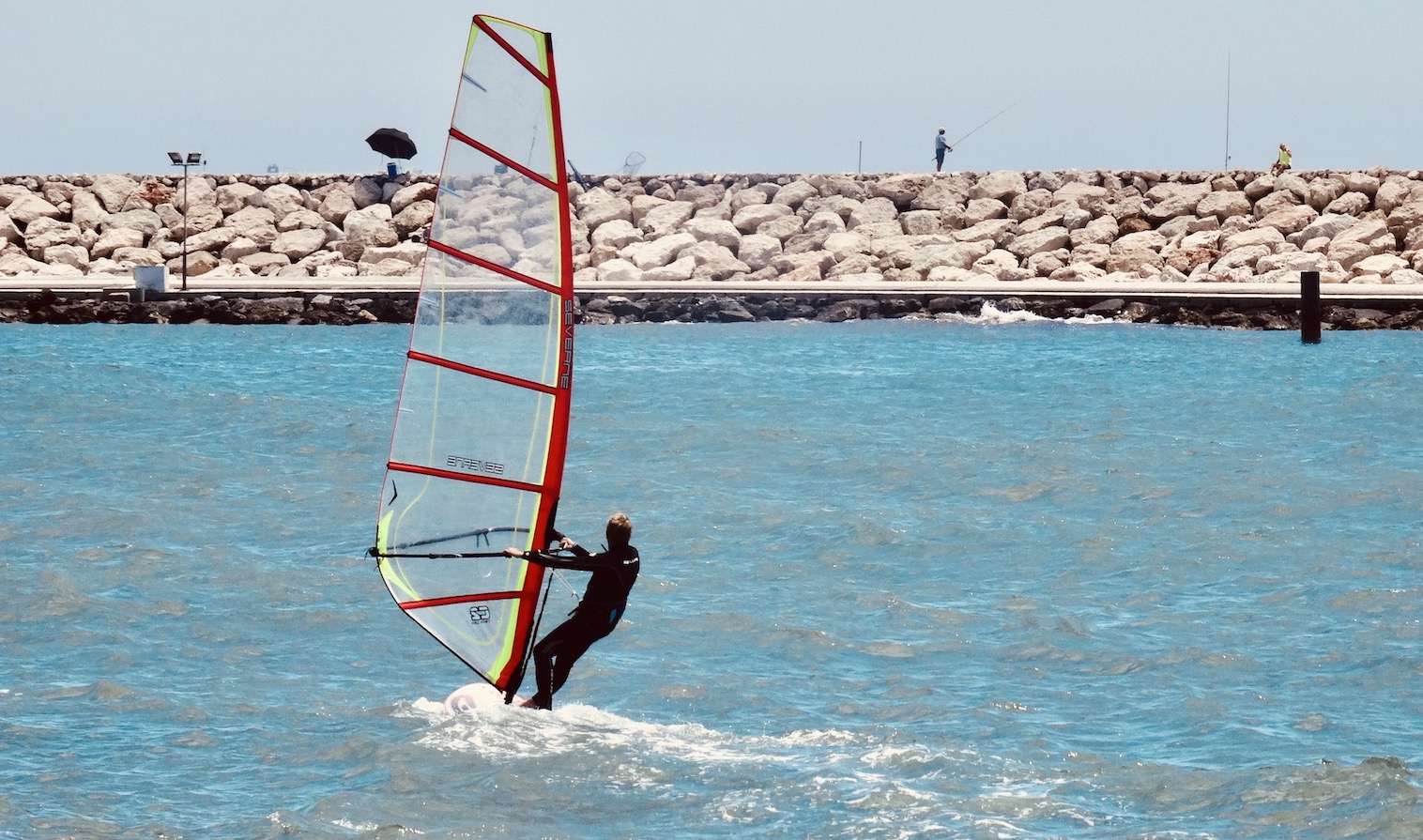 Right enough, there was plenty going on in the marina’s waters. Before starting back for the train station, I sat for a bit watching all the activity. There was a group of canoeists heading out on an expedition of some sort. Furthermore, a lone guy was wind sailing, while a speedboat zoomed by the row of fishermen out on the pier. I

felt glad I’d given Benalmadena a try, and that my efforts had left me pleasantly surprised. As a result, I felt moved there and then to make the time to see a bit more of The Costa del Sol. Next up… the much maligned resort town of Torremolinos.