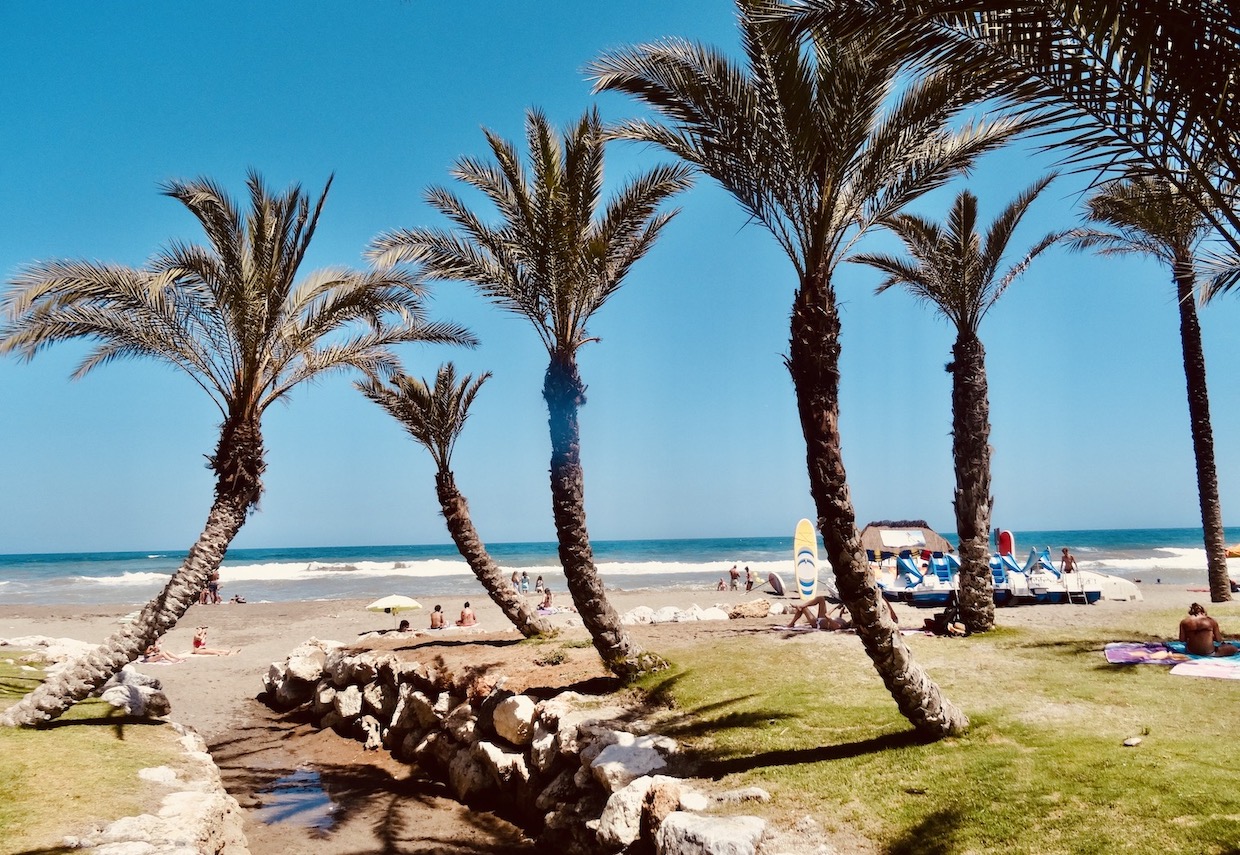 July 2016. It would be an understatement to say that Torremolinos doesn’t have a great reputation. Disparaged by many as the grottiest of The Costa del Sol towns, in Britain it has the unfortunate nickname Torrid-molinos.

Nevertheless, I had already resolved to give these unloved coastal towns a try. Mainly out of curiosity, and the fact that they were so easy to reach from my apartment in the city of Malaga.

Moreover, I had been pleasantly surprised by my visit to another Costa del Sol town, Benalmadena. Thus I set off one afternoon with just a touch of hope that Torremolinos wouldn’t be quite as… torrid... as I’d been led to believe. 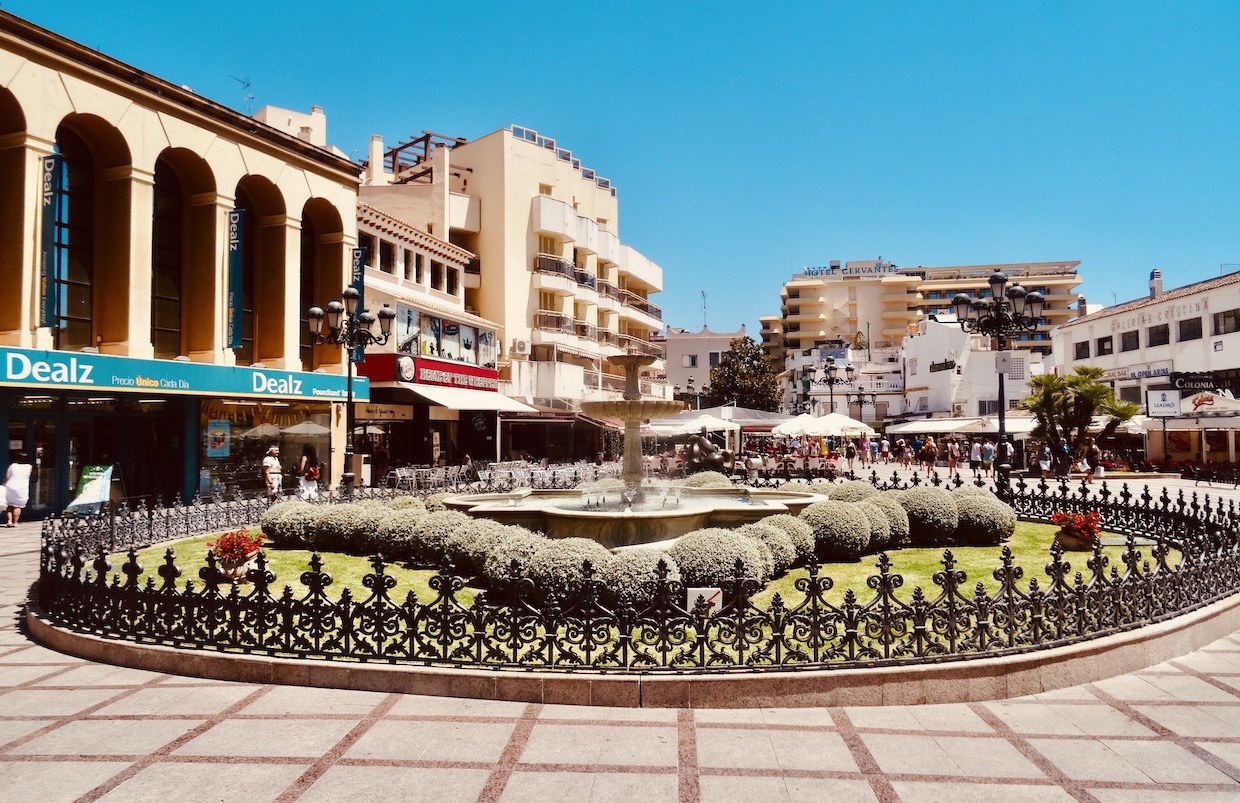 The train journey over was a breeze, a swift uncomplicated half an hour. Exiting the station, I found myself on Plaza de la Nogalera, a large square packed with shops, restaurants and a tacky Dealz discount retail store.

As first impressions go, it seemed… ok. The architecture was largely uninspiring, while there were no monuments or sculptures to speak of. On the other hand, let’s give credit where credit’s due, the place was clean and (a little) green. Benalmadena 1 Torremolinos 0. 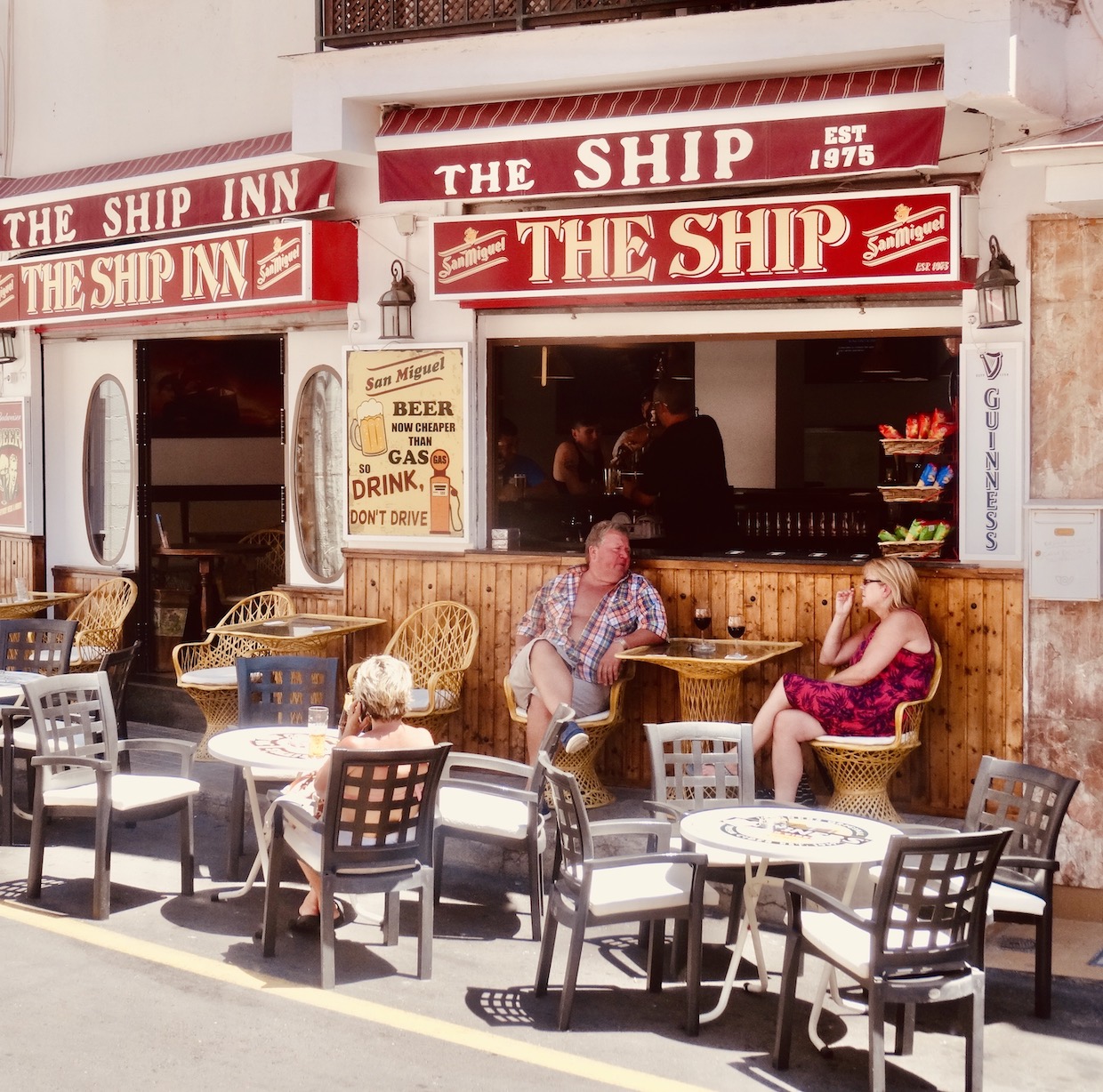 As I ambled vaguely in the direction of the old town, I quickly realised that in Torremolinos the British tourist-expat vibe was much more audible.

In fact, there was drunken chanting at a sports bar and what I can only describe as dubious, red-faced opinions in a shabby looking pub called The Ship. 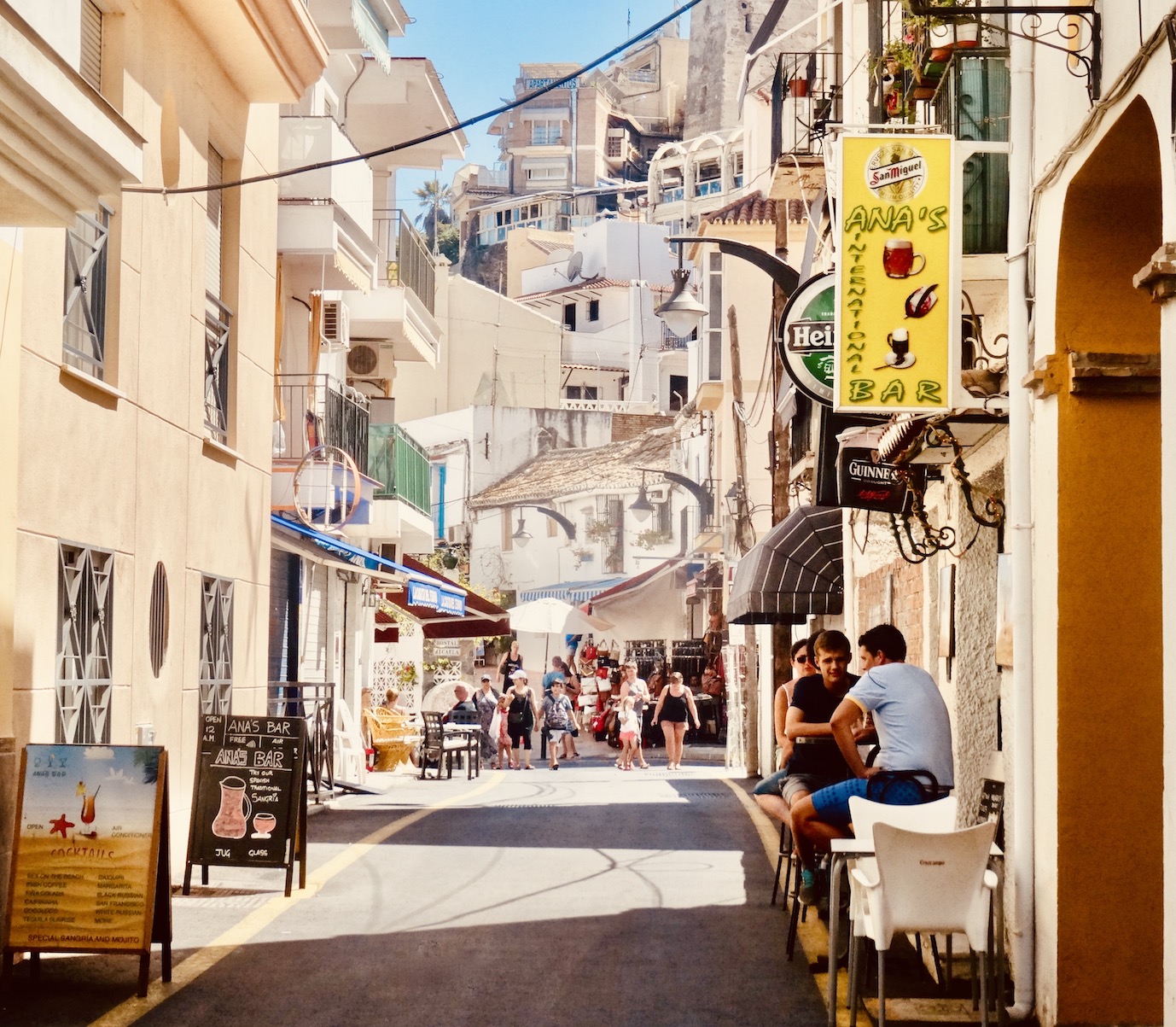 As with my trip to Benalmadena, I arrived with no particular plan. I just wanted to stroll around, drink in the atmosphere and see what I could sniff out. Heading towards the coastline, I made my way through the handsomeish old town, a compact network of narrow streets and magnolia-lined squares. 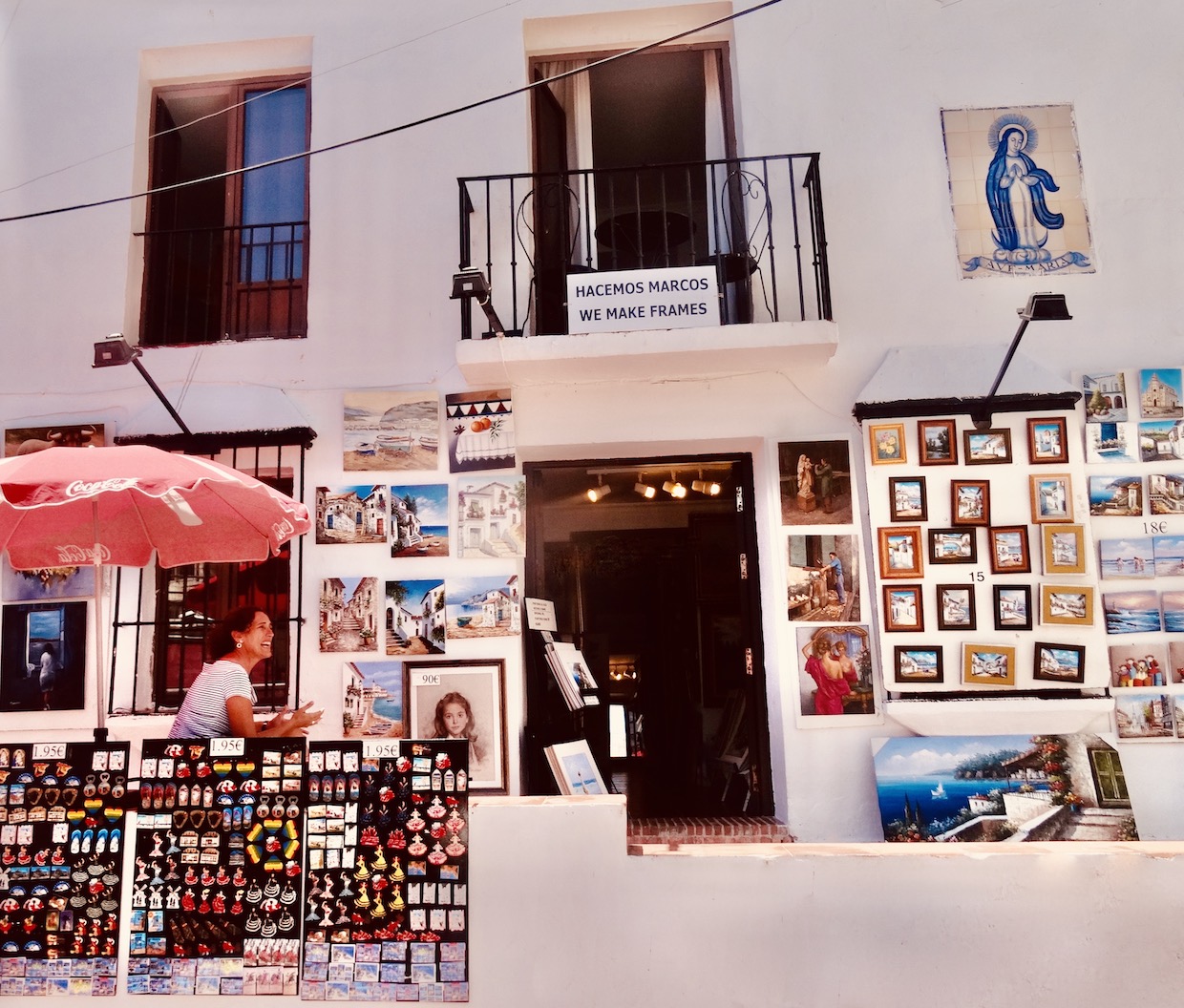 Visually, it was pleasant enough, although there was very little to actually see. Just bars, clothes shops, off licenses, fast food joints and endless souvenir stores. All set to the clinking of beer glasses and the faint whiff of marijuana. Not the worst beach approach in the world, but nothing to rival Benalmadena’s wonderful Paloma Park. Benalmadena 3 Torremolinos 0. 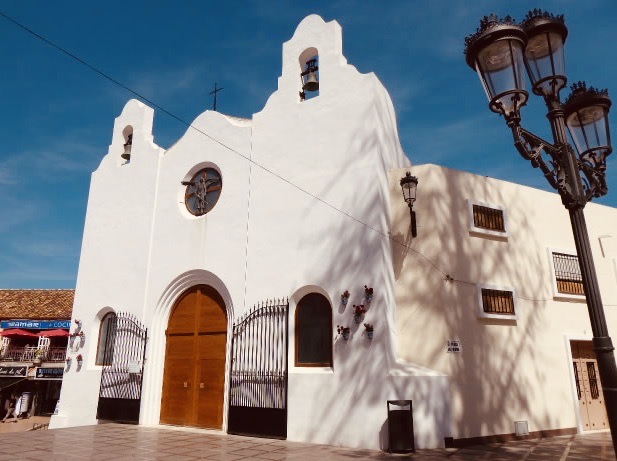 I was just starting to think how it was all looking hopeless when, happily, I stumbled across San Miguel Arcangel Church. Built in 1718 in the neoclassical style, this is the town’s oldest house of worship.

It stands in dedication to Torremolinos’ patron saint, Michael Archangel. It’s a simple, whitewashed structure with very little historical info available to paint a picture. But hey, this was a minor victory and I’ll take what I can get. 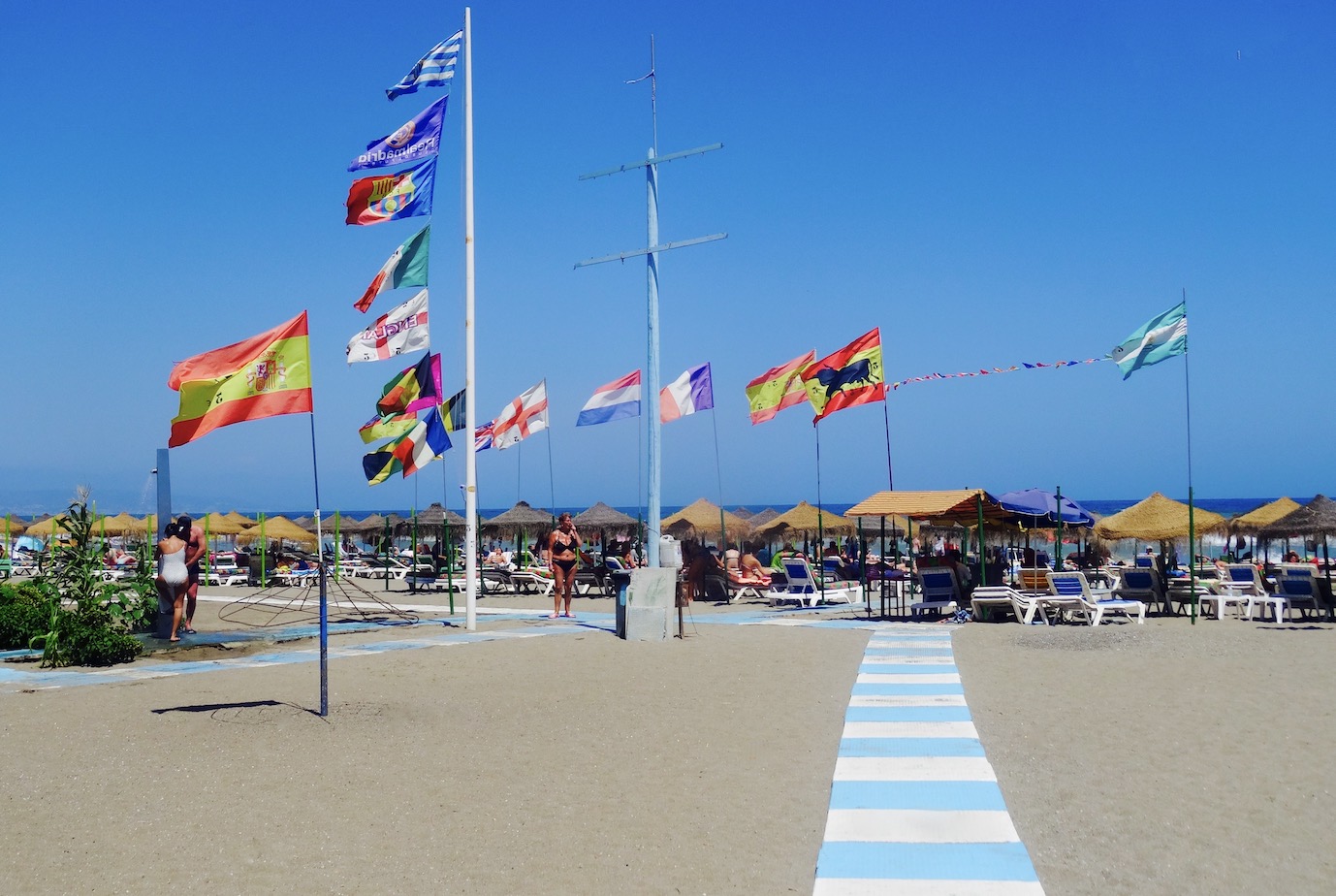 At last I reached the first stretch of golden sand, Caracola Beach. Much like the shoreline in Benalmadena it’s nothing special, with coarse sand and a factory floor of parasols and service huts.

With the view of the sea heavily obscured by so much… how can I put it… crap, I was left wondering why, from all the coastal resorts on offer throughout Europe, anyone would choose this. 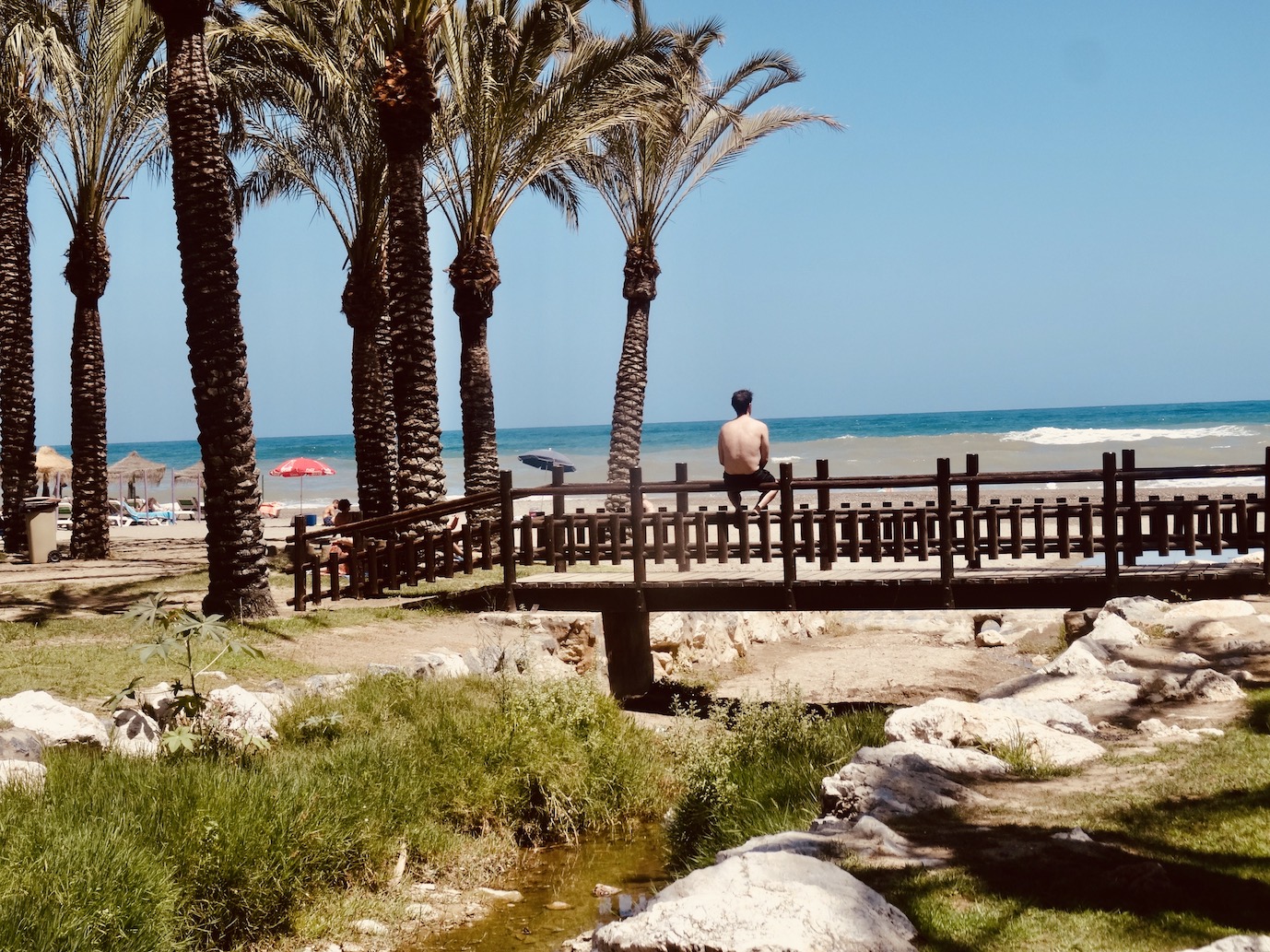 In Torremolinos’ defence, it does get quieter and prettier as one progresses north from the old town. What’s more, it’s actually possible to follow the coastline, on foot, all the way back to Malaga! That’s about thirteen kilometres. If it hadn’t been so horribly hot, I may have been tempted. 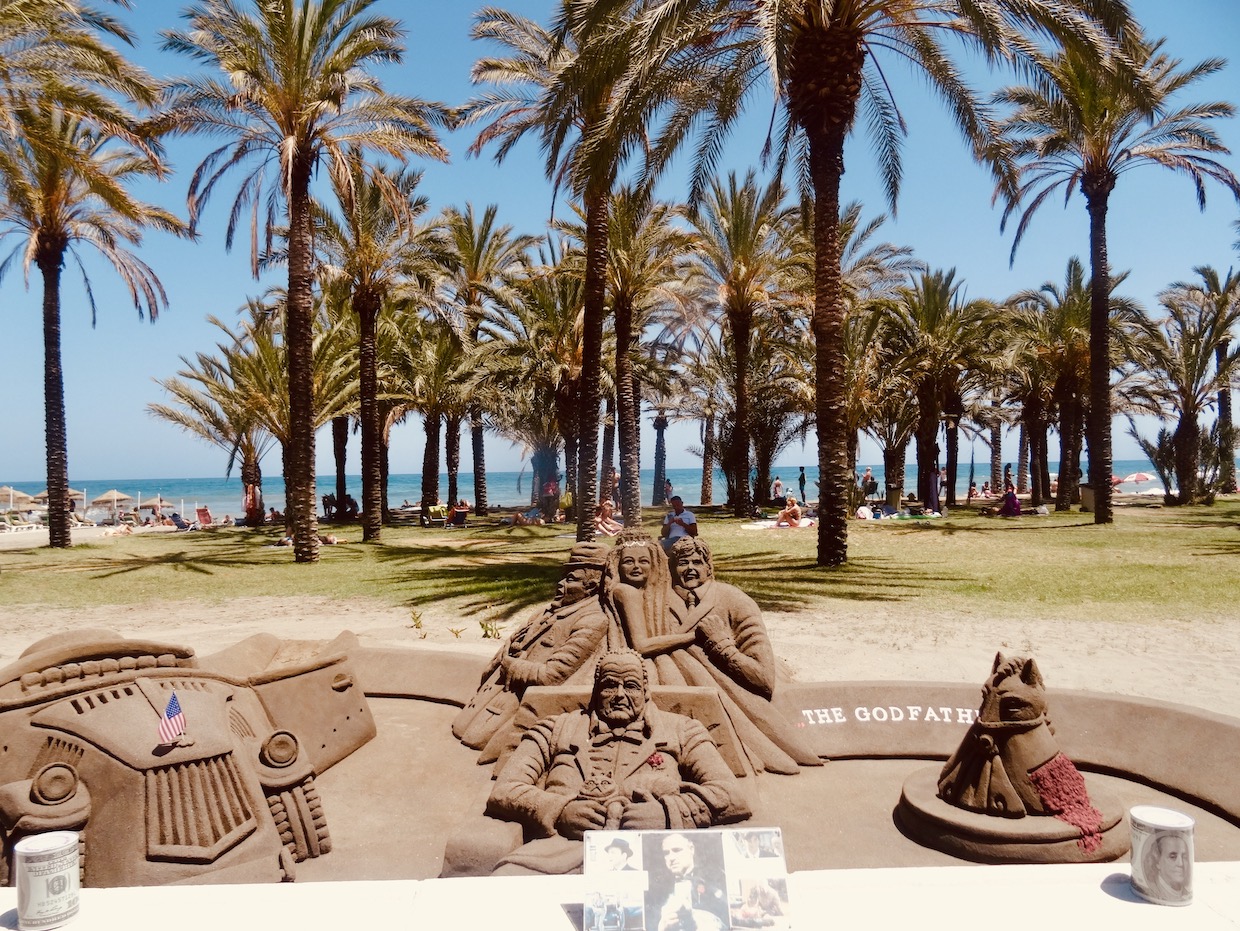 Still, I decided to see how far I could go in the sweltering heat. Before too long, I found myself distracted by a very cool display of sand sculptures in a park between the beaches of del Lido and Bajondillo.

One of the finest creations was a fantastic homage to The Godfather, with individual depictions of Don Corleone, Luca Brasi and Connie and Carlo, who get married in the opening segment. 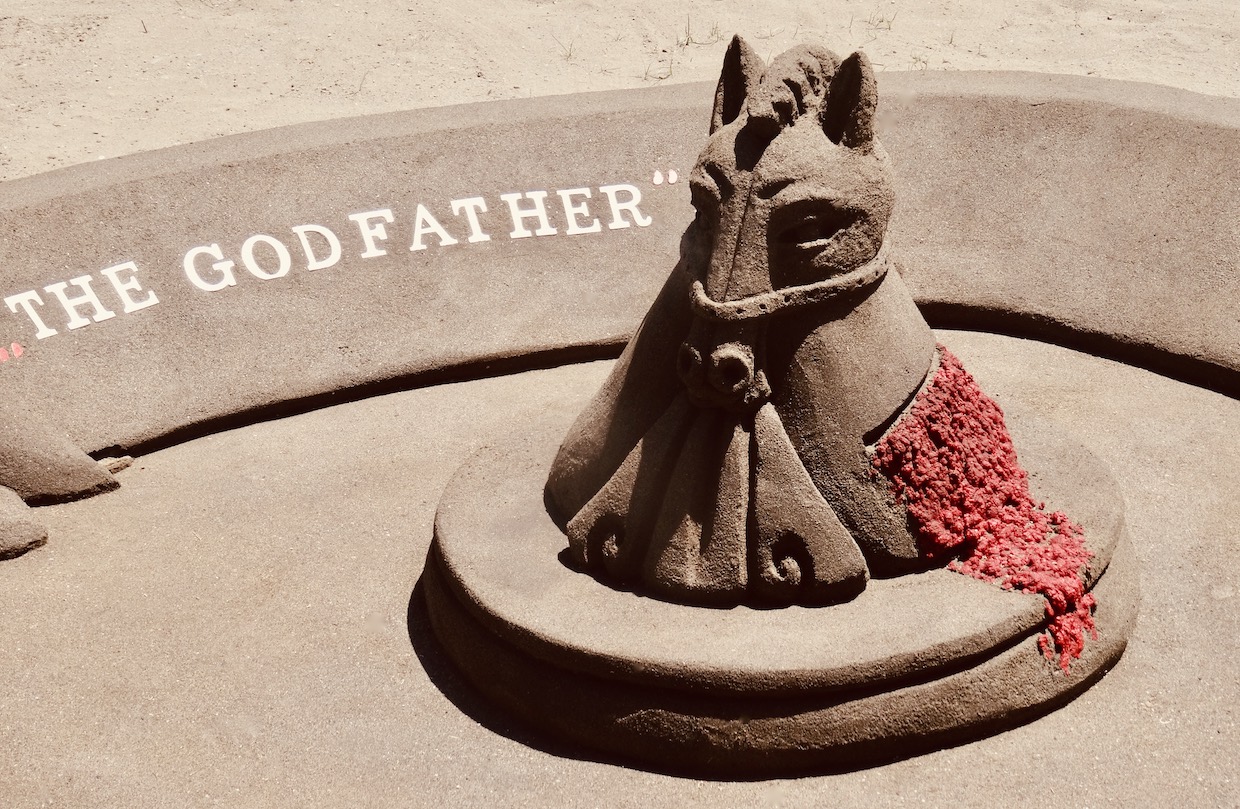 The artist had even gone to the trouble of making a horse’s head, an inspired addition that literally begged me to take an extra photograph. It was “an offer I couldn’t refuse”. 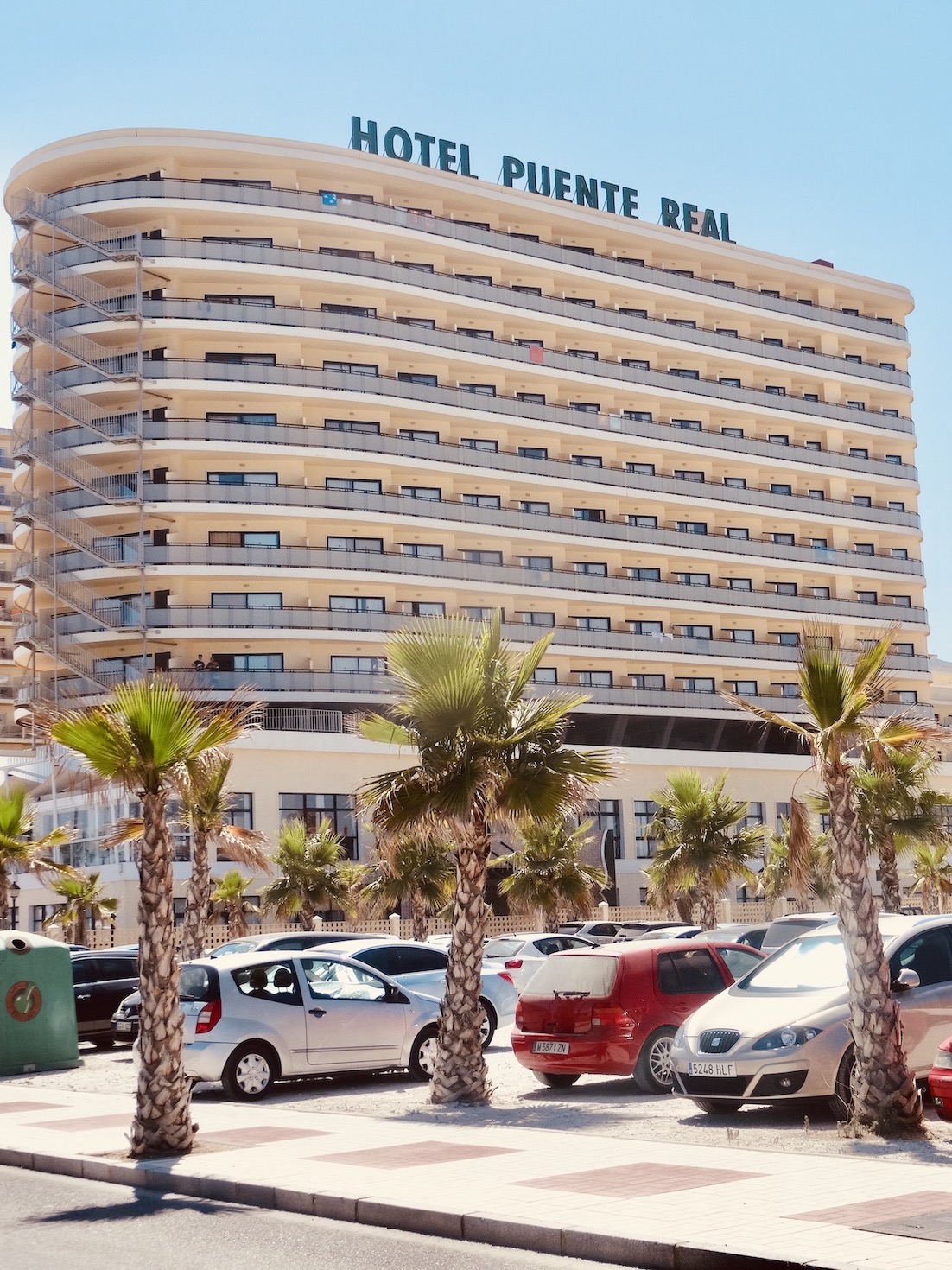 From there I continued down the coastline for quite some time, the occasional stretch of quiet sands providing respite from the various parasol factories. And then I decided I’d had enough, spontaneously dipping into the town to see what lay within the urban buzz.

Soon enough, I came across a street of truly massive hotels, a series of lumbering, charmless eyesores. Although I’m guessing the upper floor suites at least have decent sea views. 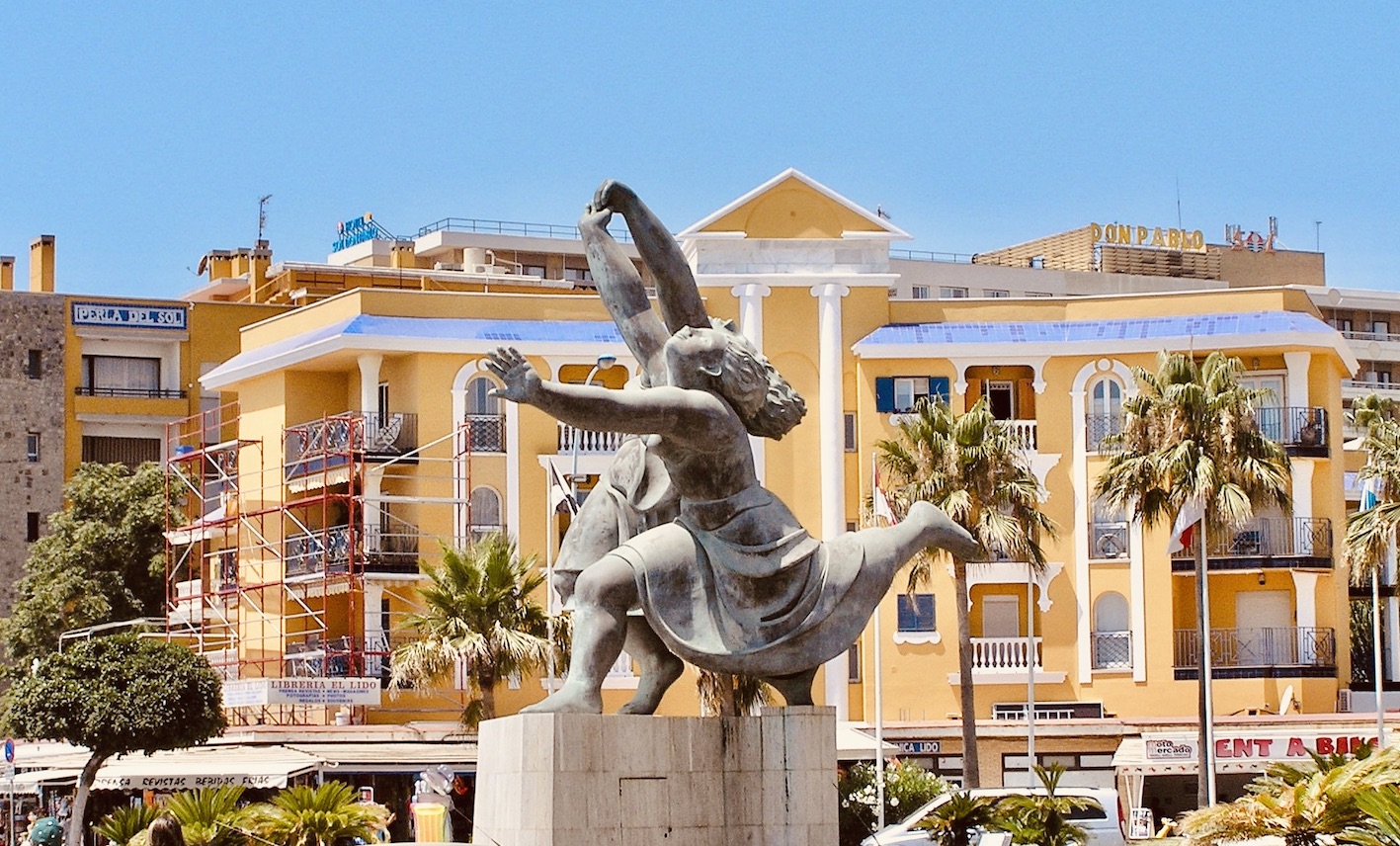 Two Women Running on the Beach.

Outside the old town, Torremolinos is quite the concrete jungle, a maze of crisscrossing streets with more supermarkets, bars, mini stores, banks and currency exchange offices that you can shake a stick at.

I was also disappointed with the lack of street art, although I did come across a weathered replica of Picasso’s Two Women Running on the Beach. 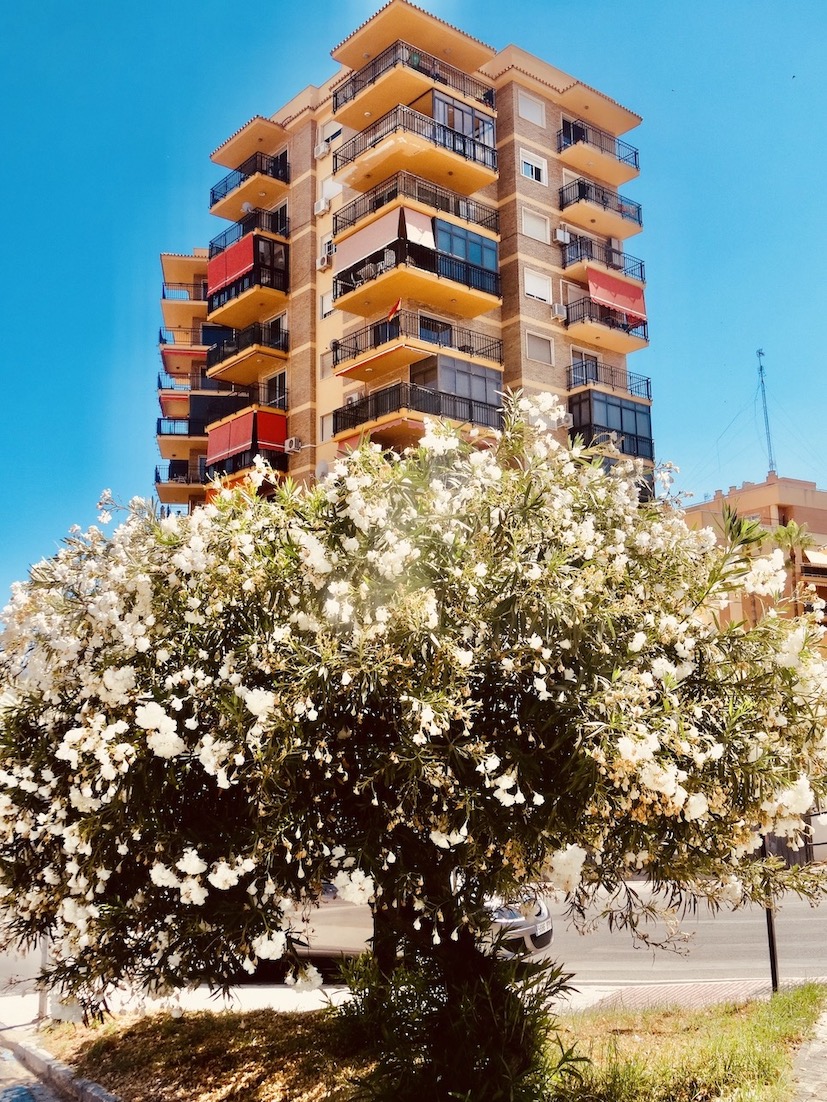 Positively fixed on finding something of genuine beauty, I spent over an hour exploring the city streets. For the most part it was very slim pickings. Although I quite liked this colourful residential block poking out from behind a fulsome magnolia tree. 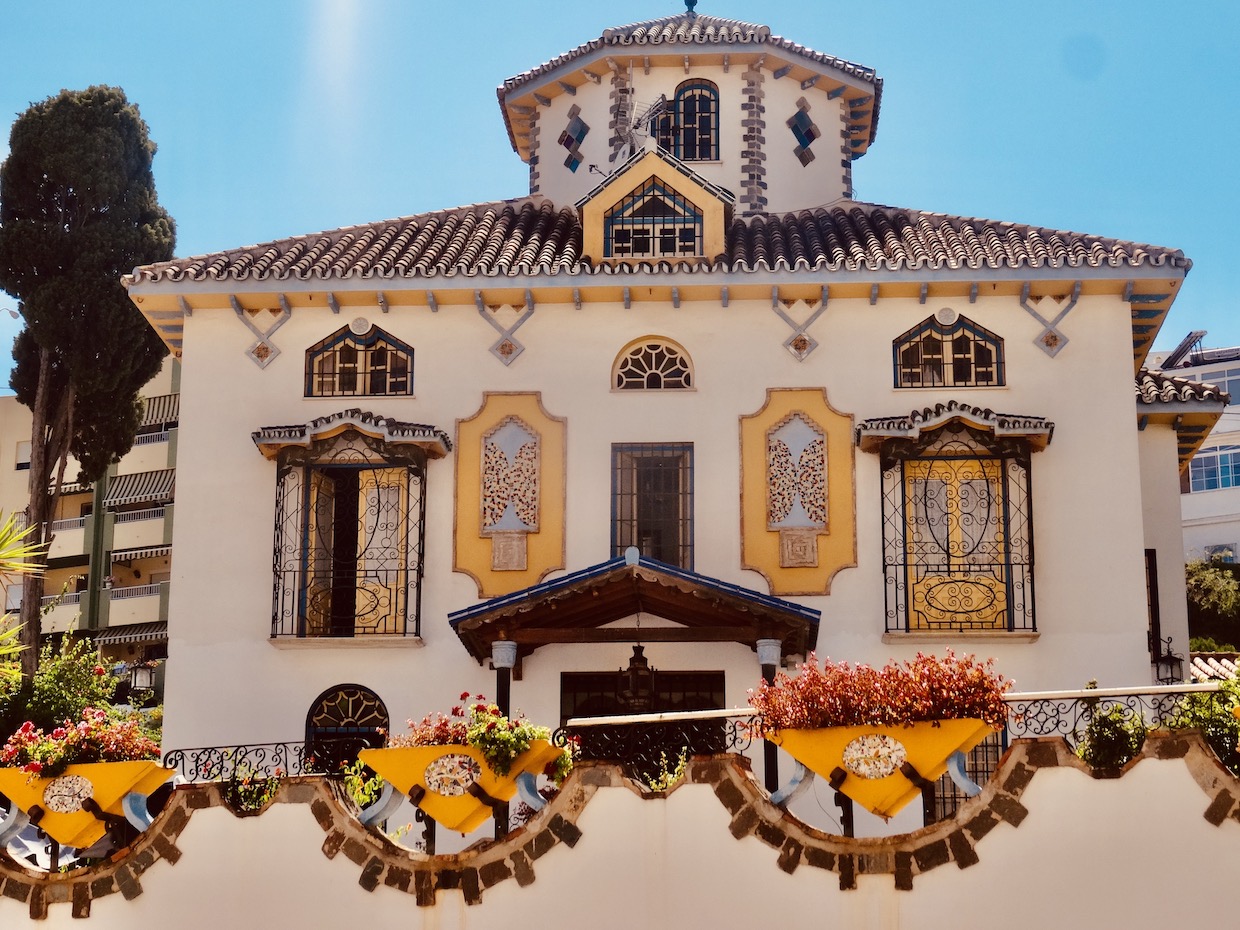 A quite gorgeous Mediterranean residence.

They say persistence pays off and in this case it was certainly true. As I began making way back to the railway station, I chanced upon two exquisite buildings. This mediterranean style structure, as far as I know, is a private residence. I could only find a couple of footprints online, both of which point towards real estate companies. 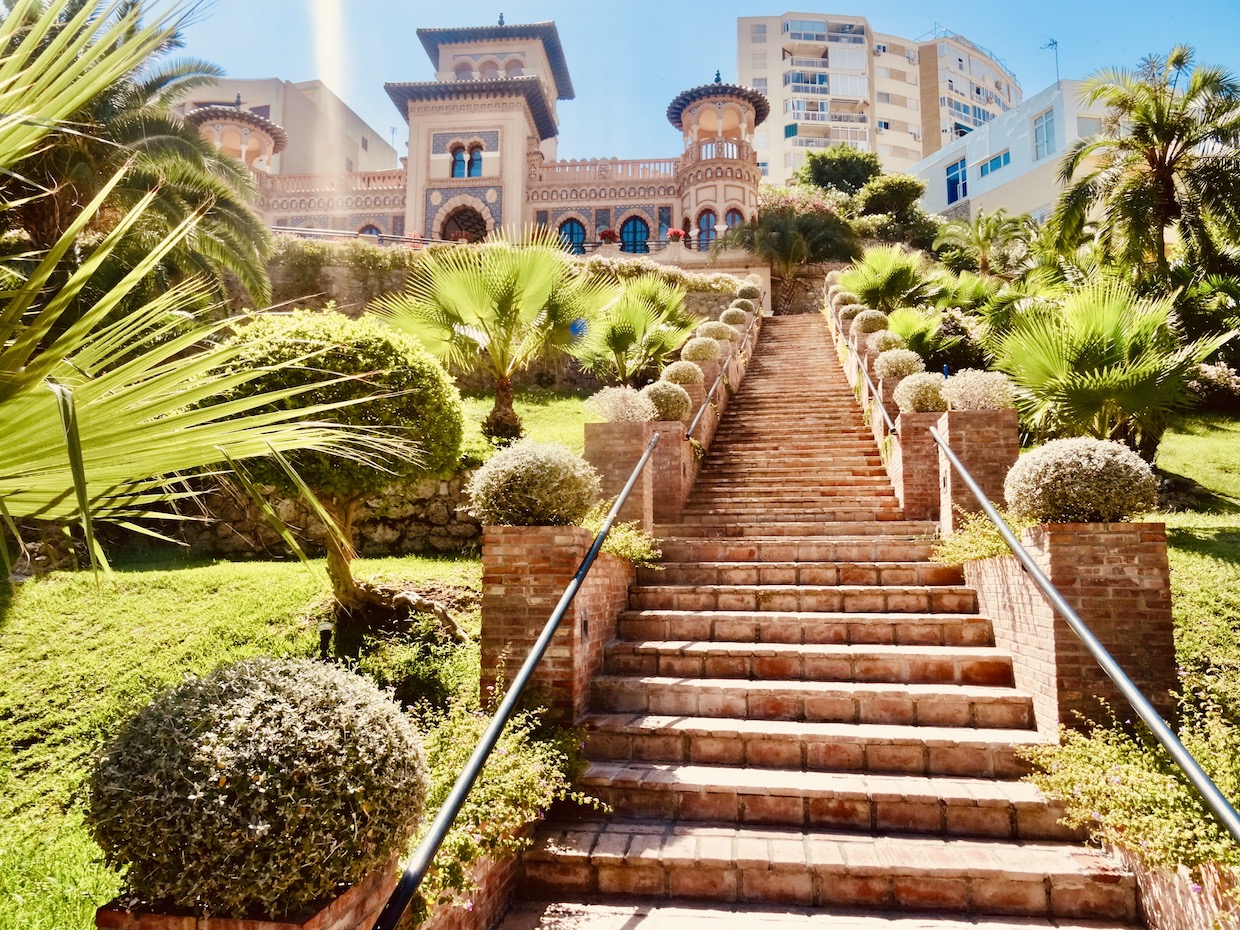 The second was this stunning mansion, Casa de los Navajas. A plaque outside the main gate informs curious visitors that it was once the home of Antonio Navajas Ruiz, a wealthy sugar cane farmer. Apparently, he owned a number of huge fields located on the site of what is now Malaga Airport.

Constructed by the architect Francisco Fernandez Fermina in 1925, Torremolinos’ finest Neo-Mudejar house is now a national monument open for tours. Needless to say the place was closed when I swung by. Nonetheless, I don’t want to be mean-spirited:

All in all, I’d say Torremolinos lived up to my generally low expectations. But I’m still glad I took the time to come and have a look. I should point out that, like many of The Costa del Sol’s seaside towns, it has a number of major attractions geared towards the family tourist scene.

Among these, stands a monster water park, Aqualand, and a Crocodile Park that claims to have Europe’s largest croc. One sight I would’ve liked to see, had I had more time, is Molina de Inca Botanical Garden. If memory serves me well, I was a bit restless that day and keen to get back to Malaga.

(extra point for Benalmadena, just because I preferred the overall vibe).