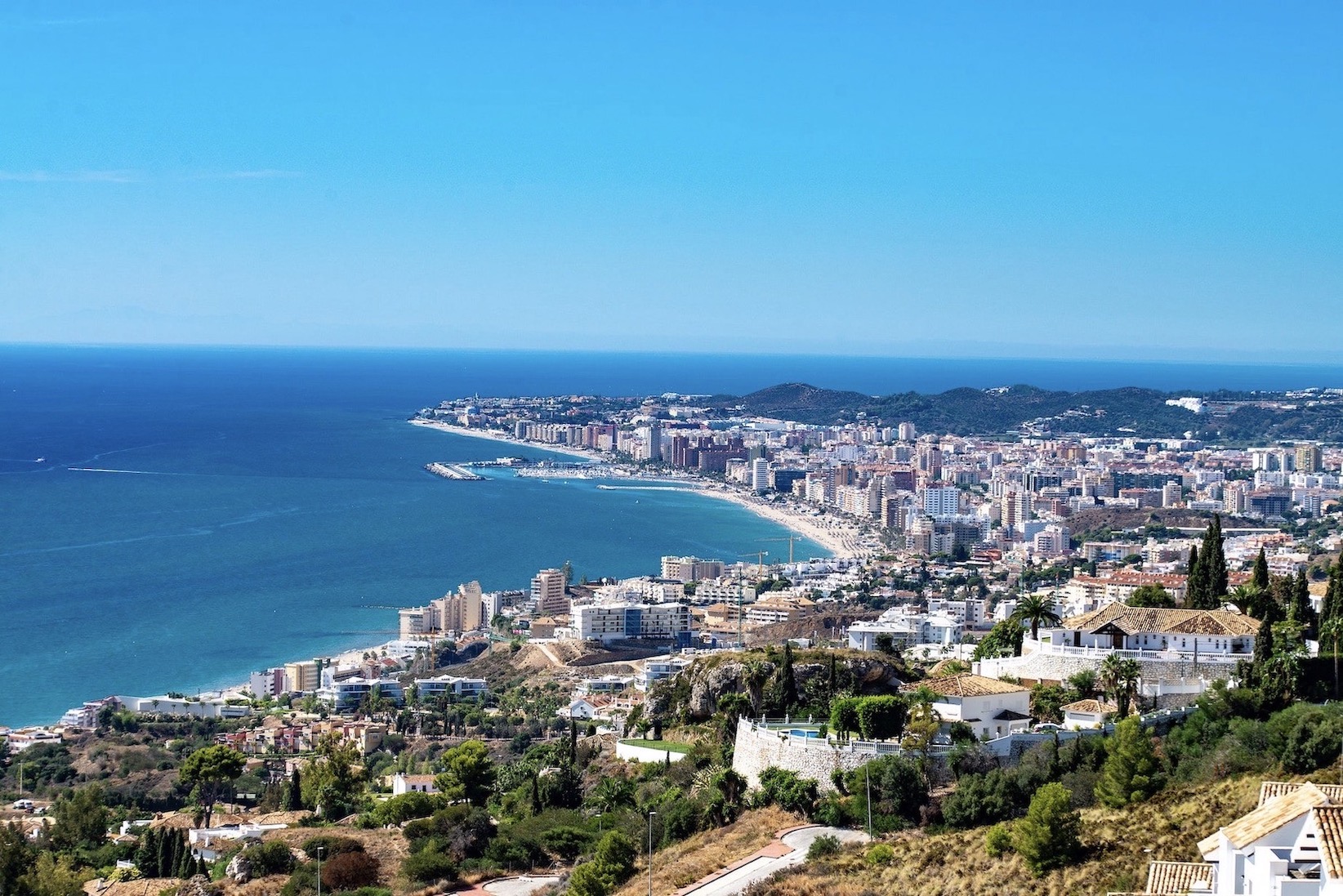 December 2016. After an initial flurry of Costa del Sol visits in the summer of 2016, I had admittedly forgotten about my strange travel project.

Basically, I had resolved to check out the coastal region’s British-Spanish hybrid towns one by one. Chiefly to see if they really were as awful as everyone says. Guilty pleasure travel, I suppose you could call it.

After a surprisingly lovely day in Benalmadena, the town of Torremolinos had shown me that there was good reason for the general disdain surrounding the Costa Del Sol. With so many genuinely gorgeous and authentically Spanish towns and cities to focus on throughout Andalusia, my CDS project had fallen by the wayside.

Then, one December afternoon in Malaga, I found myself at a loose end. Quite suddenly, I decided to grab my rucksack, throw on some shoes and head down to Maria Zambrano Railway Station. 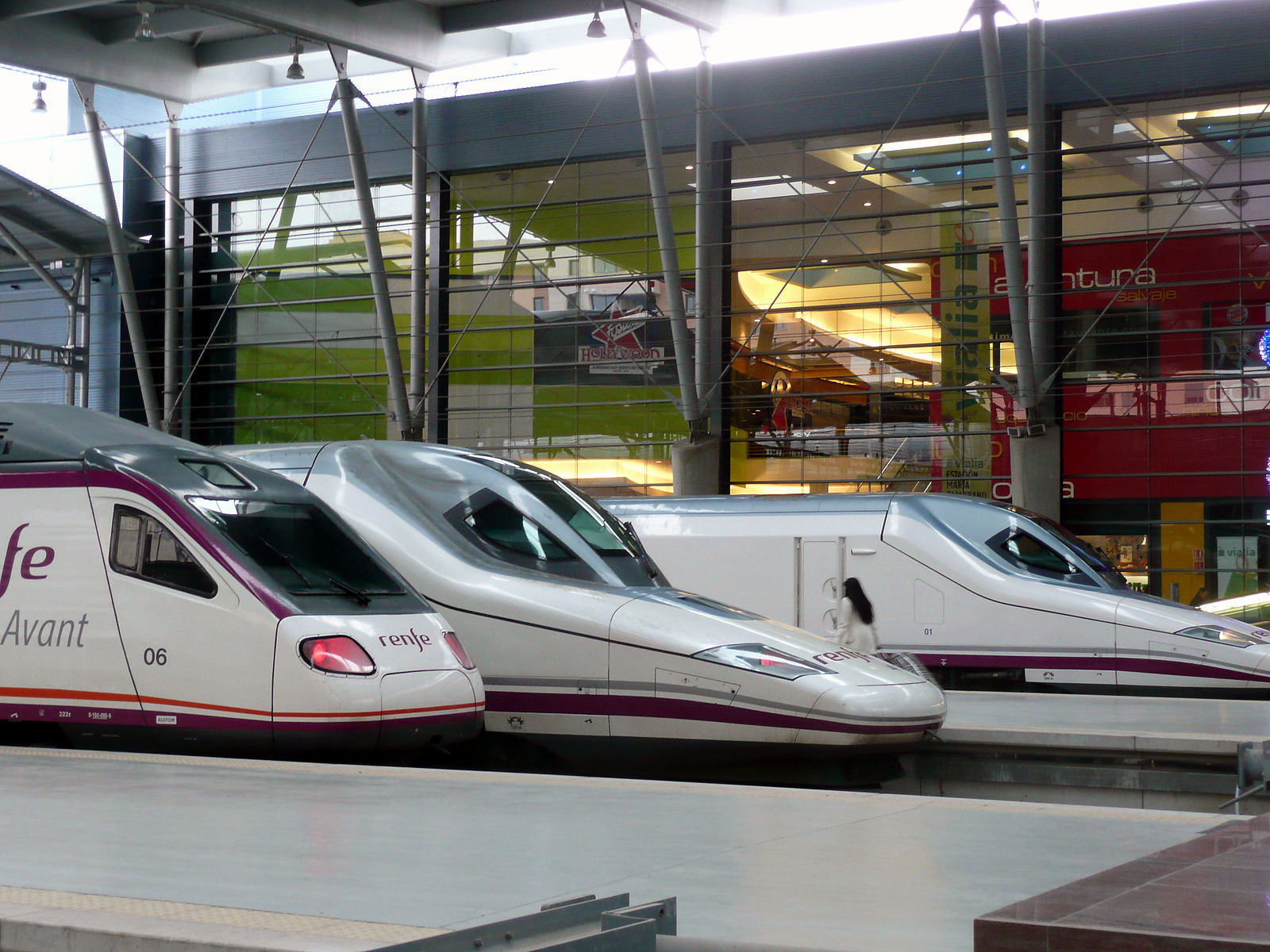 I was so completely devoid of a plan, I didn’t even know where I was going. Not until I was on the train that runs along the Costa del Sol’s seemingly infinite coastline. “Next stop Fuengirola” came the tinny announcement. Upon which I thought, yeah, that’ll do. 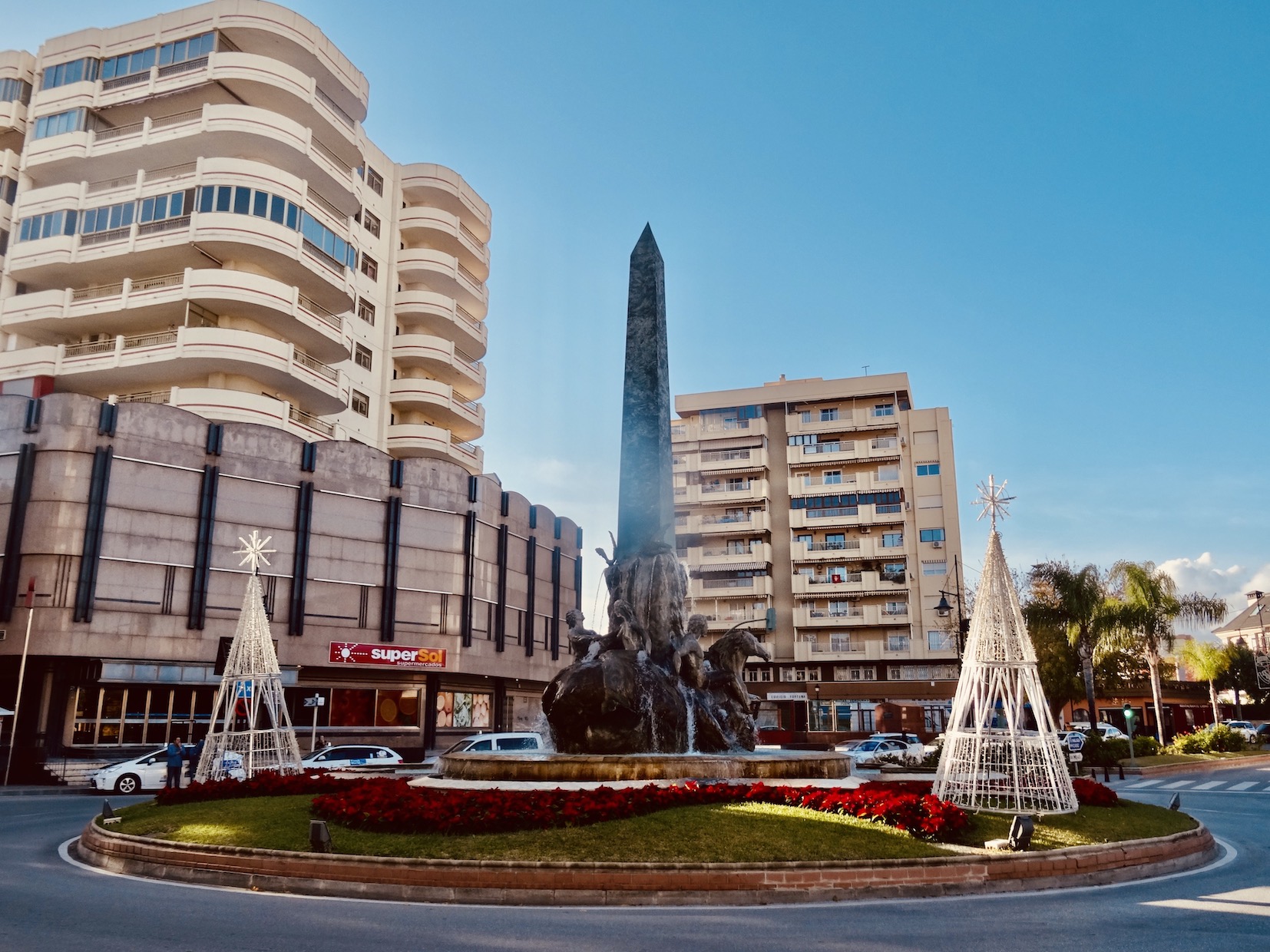 Outside the train station, I stopped by the handsome Obelisk Roundabout and mapped out a walking route to the old town. Anyone who reads this blog regularly will know that I’m usually a do-er. Typically, I like to stay in places for an extended period of time. Peel back the layers and get under the skin. When I can’t do that, I tend to get super organised and pack in as much as I possibly can.

By its very nature, The Costa Del Sol allowed me to take a giant step back. With a general lack of sights, or at least the kind of sights I’m interested in, these experiences were purely about doing exactly what I wanted at precisely my desired pace. Moreover, on that particular afternoon, I was feeling somewhat reflective and wanted nothing more than an aimless stroll. 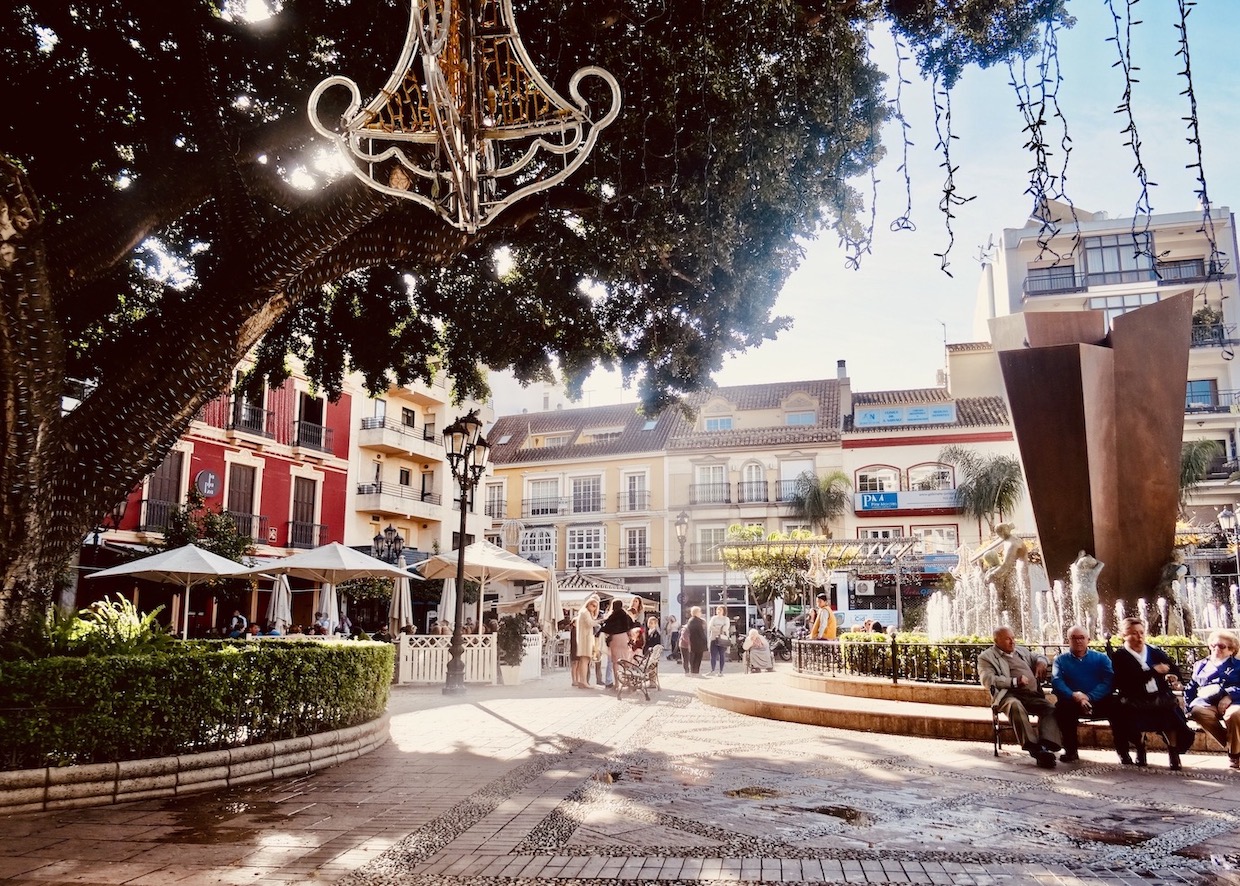 My first stop was at Plaza de la Constitución, the town’s definitive focal point. Originally a fishing village, Fuengirola’s development as a tourist town and British expat haven began in the mid 19th century. This main square dates back to 1841 when the town’s first mayor, Antonio García Cortés, unveiled a newly paved space with a grand opening ceremony. 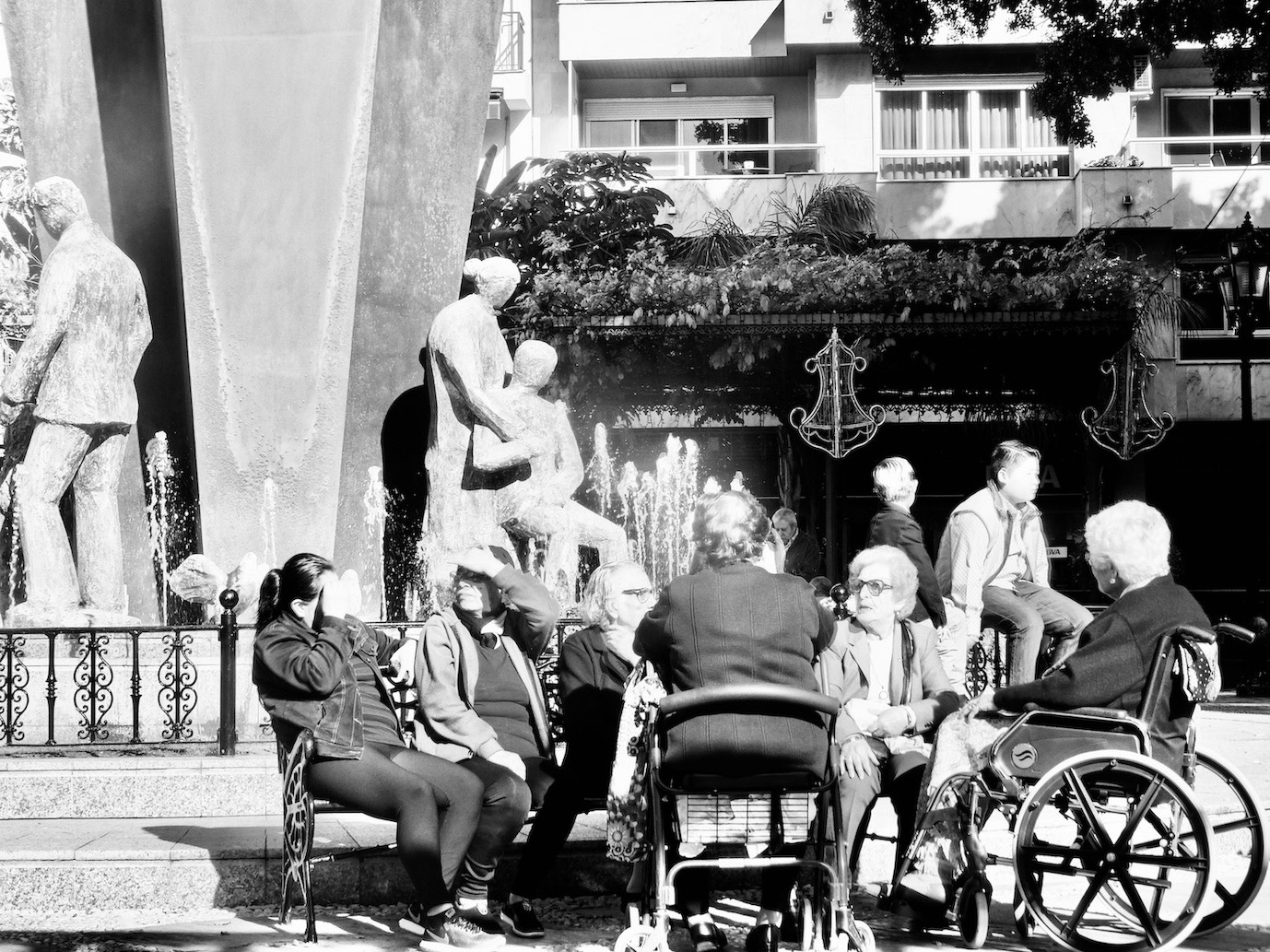 Immediately, the square gives off much more of an authentic Spanish feel than both Benalmadena and Torremolinos combined. Especially with the pockets of local seniors who habitually hang out at the square’s central fountain. Somehow, I liked the fact that although the British may have overtaken Fuengirola, this square was theirs! 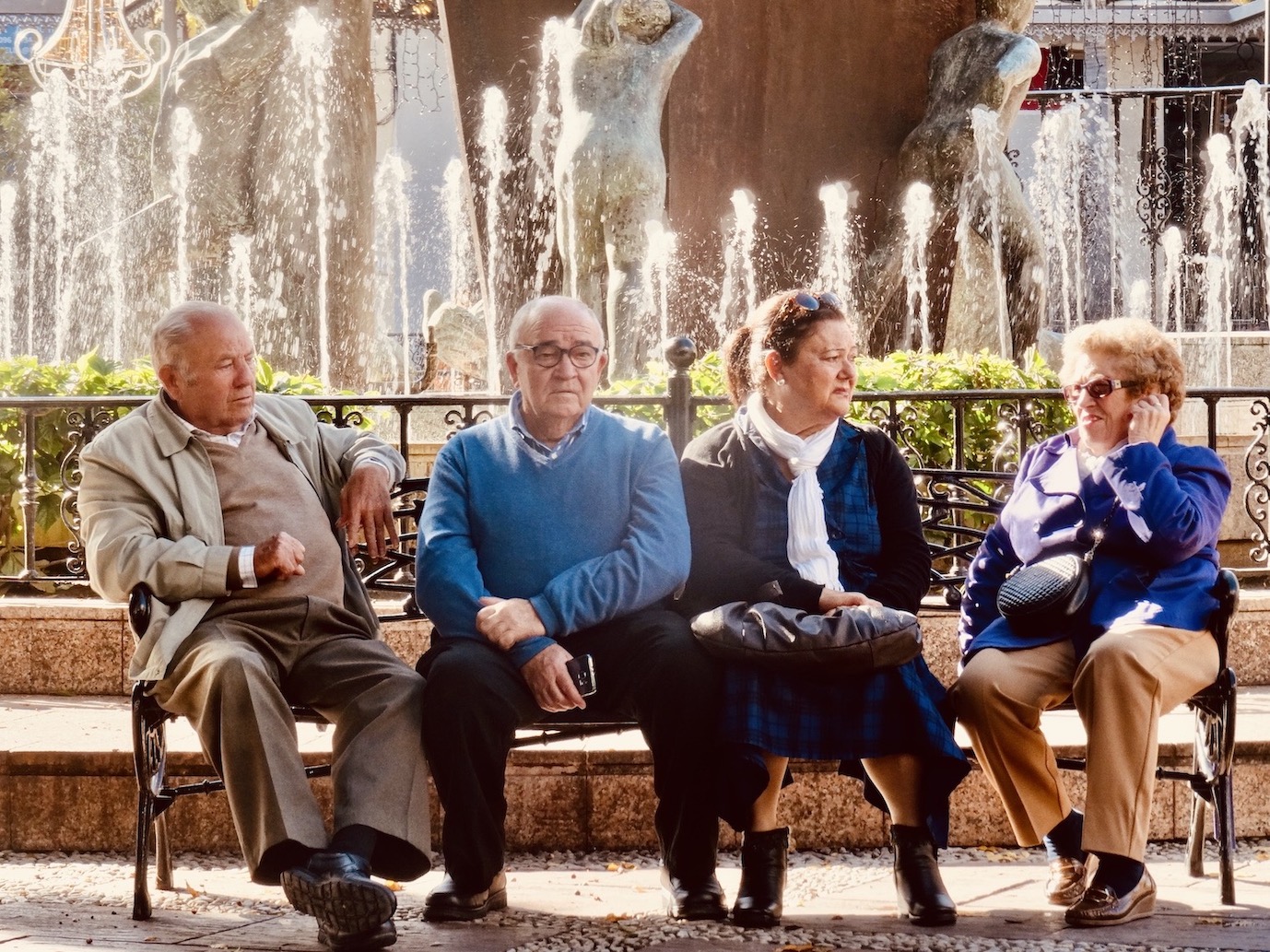 Happy to engage in some sittin’ doin’ nothin’ myself, I took a load off on one of the iron benches and observed for a bit. They were not what one could call a happy bunch. While my Spanish comprehension is patchy at best, I could still pick out bits of gossiping, complaining and even arguing.

Moreover, it was grimaces all round as I glanced from face to face. Still, I suppose if one must be unhappy, misery is always better in the sun. 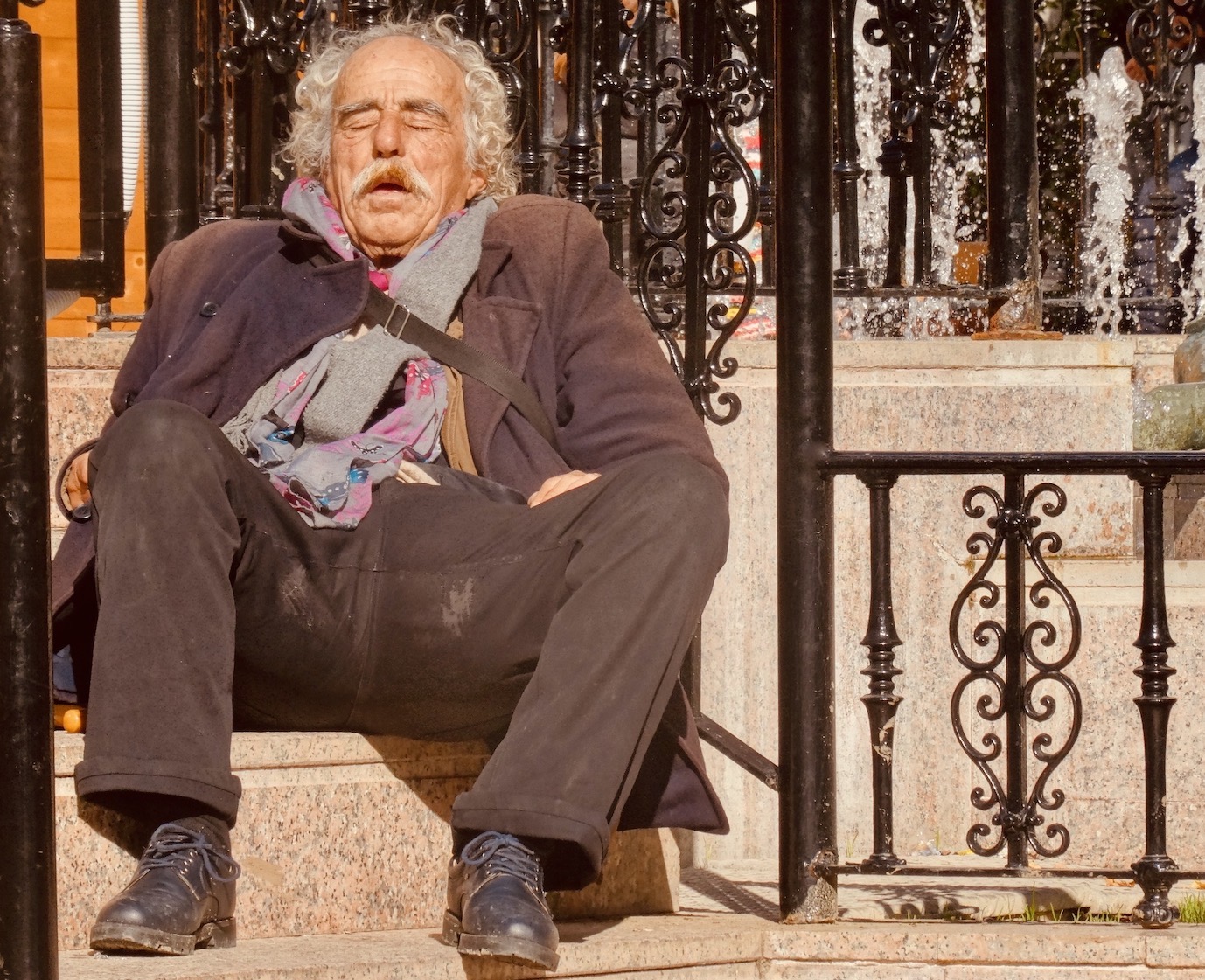 My theory possibly also works for this unfortunate man. He was snoozing by one of the fountain’s corners, an empty and forlorn looking cap laid out on the step below his feet. You certainly wouldn’t be able to do this mid December in London. Nevertheless, he had my full sympathy. Hence I dropped a couple of Euros into his cap as I rose and moved on. 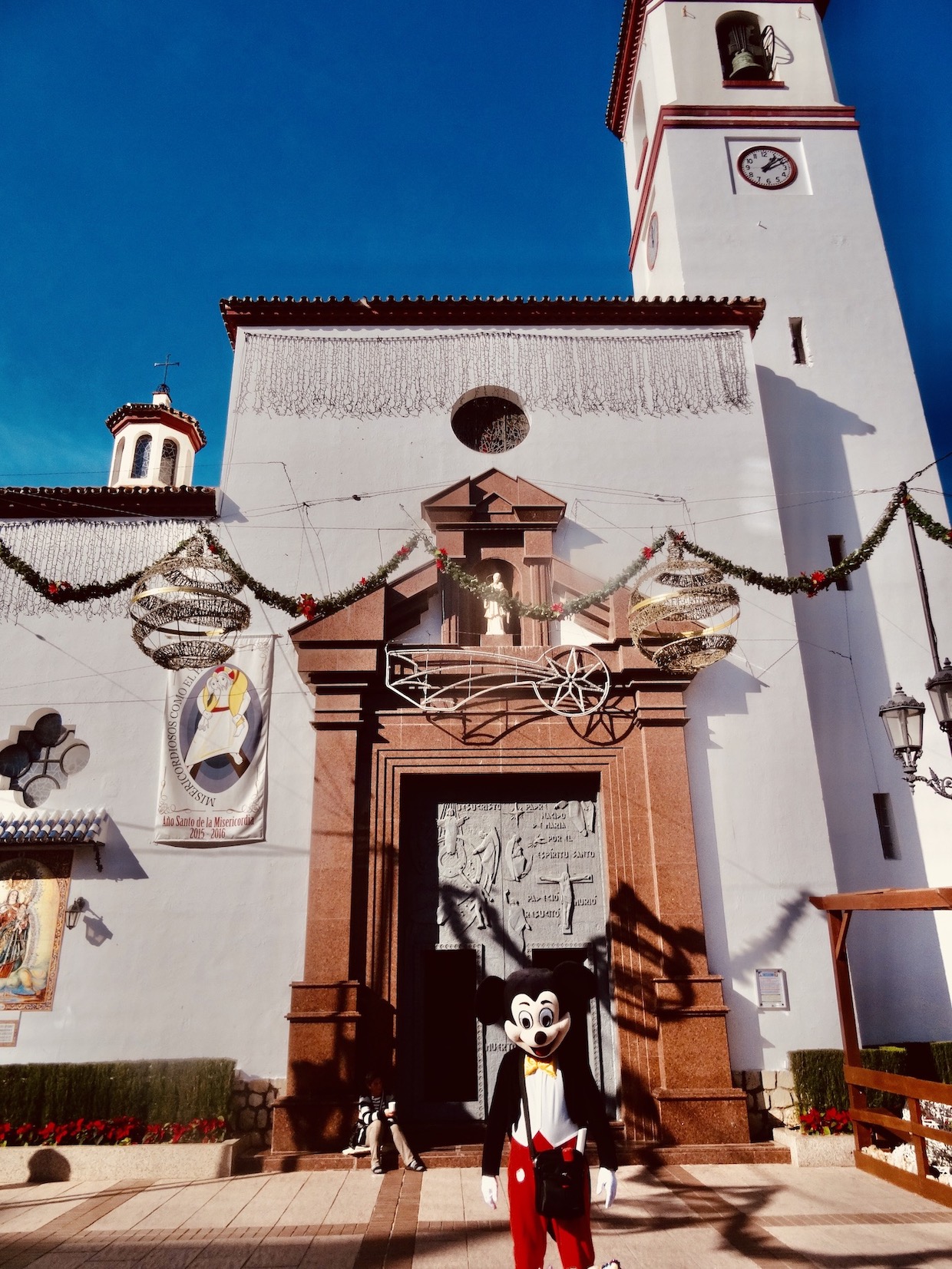 The towering Our Lady of El Rosario Parish Church provides the square with much of the shade people come to hide in. Don’t let its Neo-baroque facade fool you, as it wasn’t actually built until the early 1950s.

As I made my approach that day, I found myself greeted by a tall man selling candy in a Mickey Mouse suit. Which, I have to say, was definitely a Spanish church first. 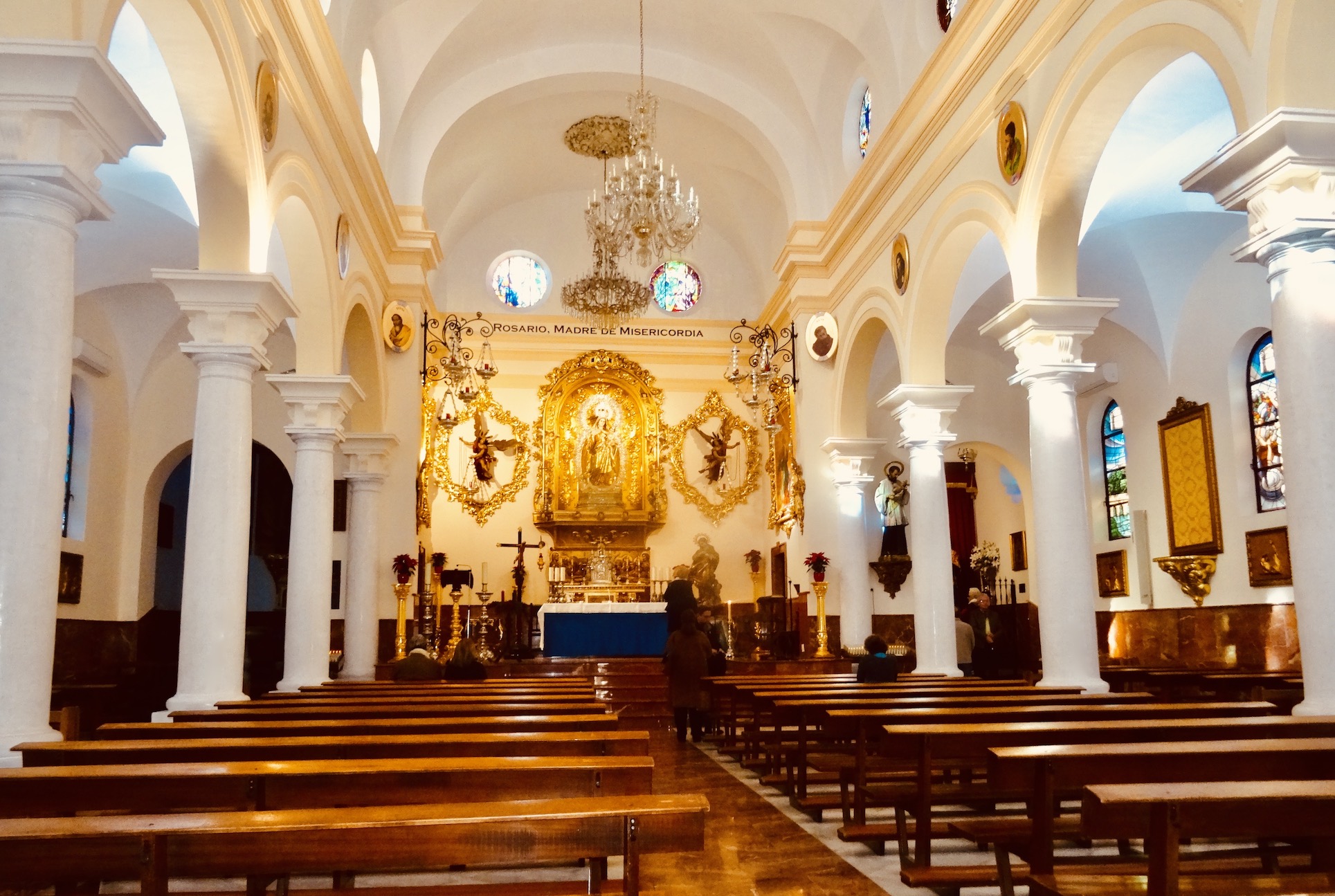 Inside, an elegant, ceramic altar stands in honour of Our Lady of The Rosary, Fuengirola’s patron saint. Its main feature is an impressive carving of the virgin made locally in the late 1940s.

According to online articles, which are very few and far between, daily mass still takes place and there are regular services in English. 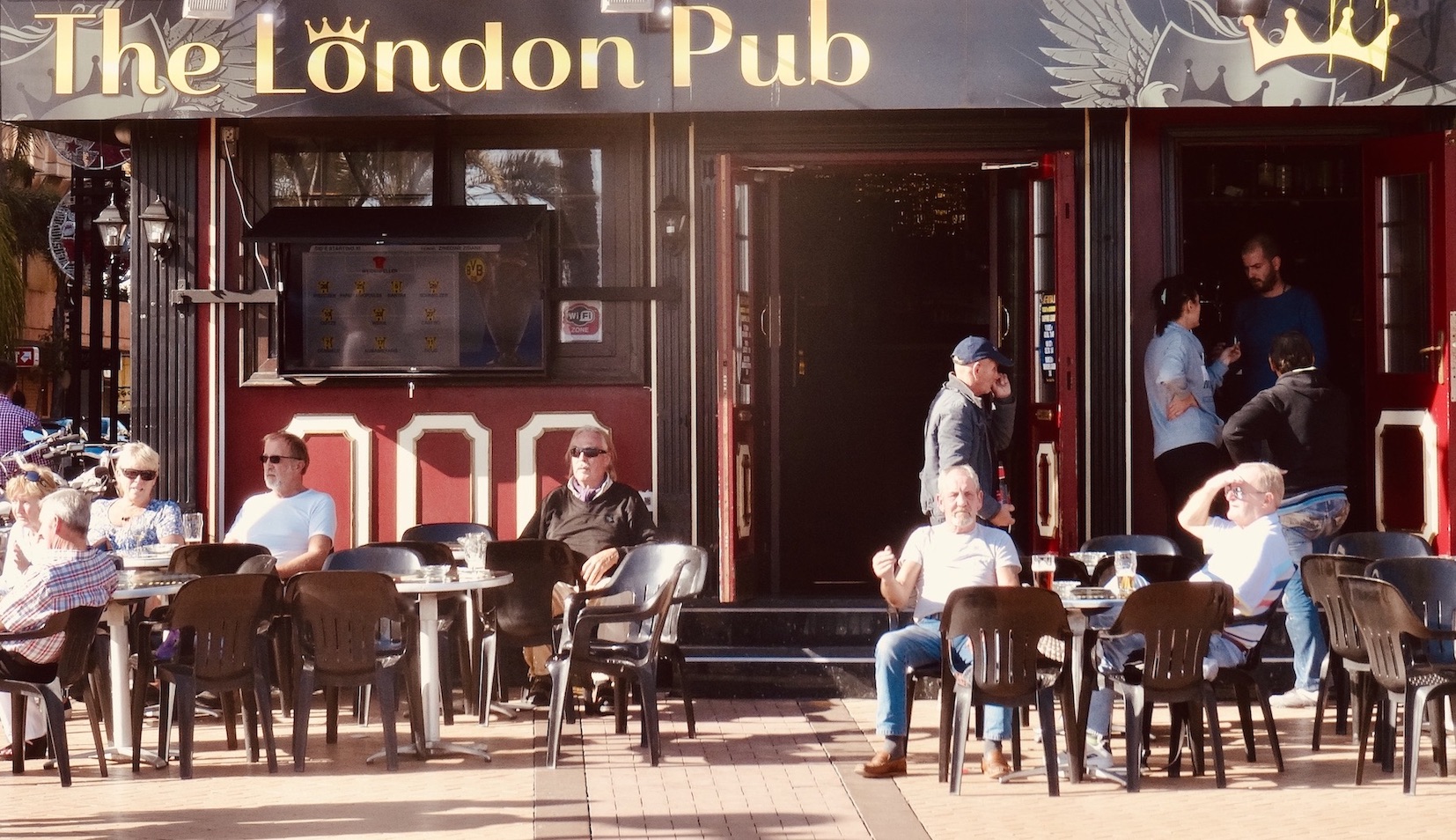 On my way to the beach, I caught some glimpses of Fuengirola’s British revolution. Some utterly charmless watering holes, such as The London Pub, and plenty of greasy cafes trumpeting “the best English breakfast in town”. 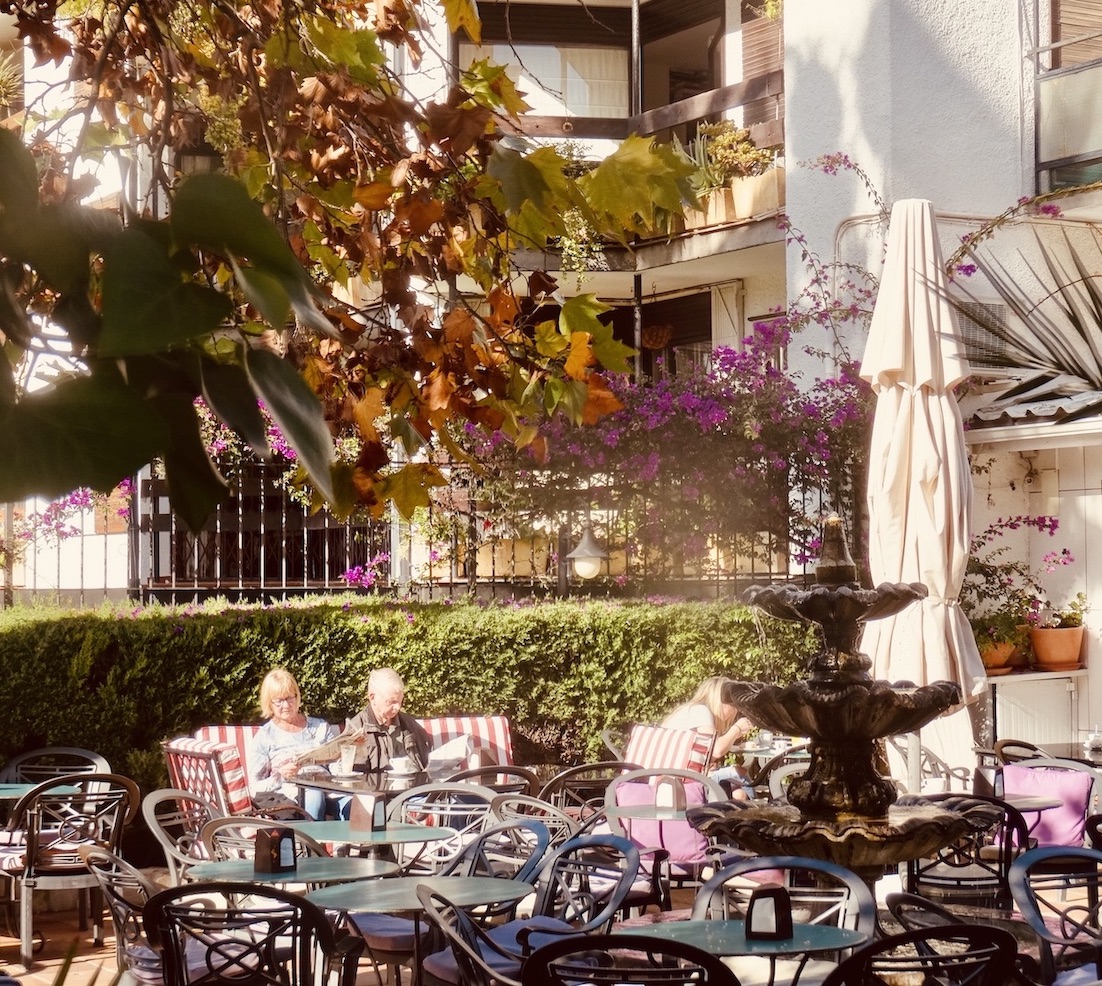 However, for the most part I found Fuengirola’s old quarter the nicest of the three towns I’d visited so far. So pleasant, in fact, that I decided to stop at the peaceful Garden Cafe for a beer and to sink a chapter of my Truman Capote book, In Cold Blood. 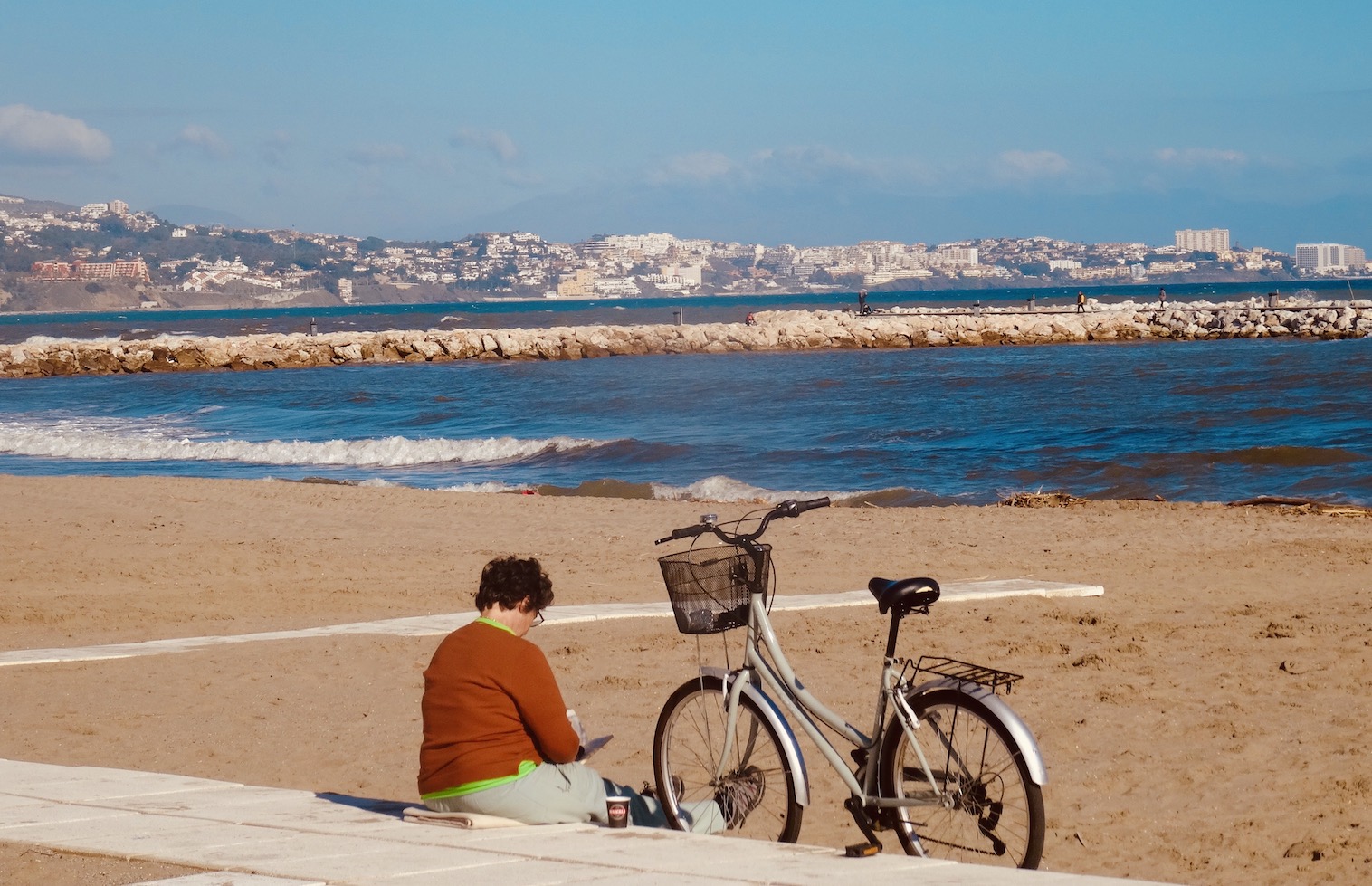 What a wonderful surprise I got when I arrived at Las Gaviotas Beach. Gone were the summer crowds and those awful squadrons of parasols I’d seen in Benalmadena and Torremolinos. In their place, absolutely nothing but an unbroken sandy vista of crashing waves and whitewashed buildings nestled in the distant hills.

Despite the fine weather, I had the place largely to myself. Just a woman reading, a dog walker and half a dozen fishermen on one of the piers. 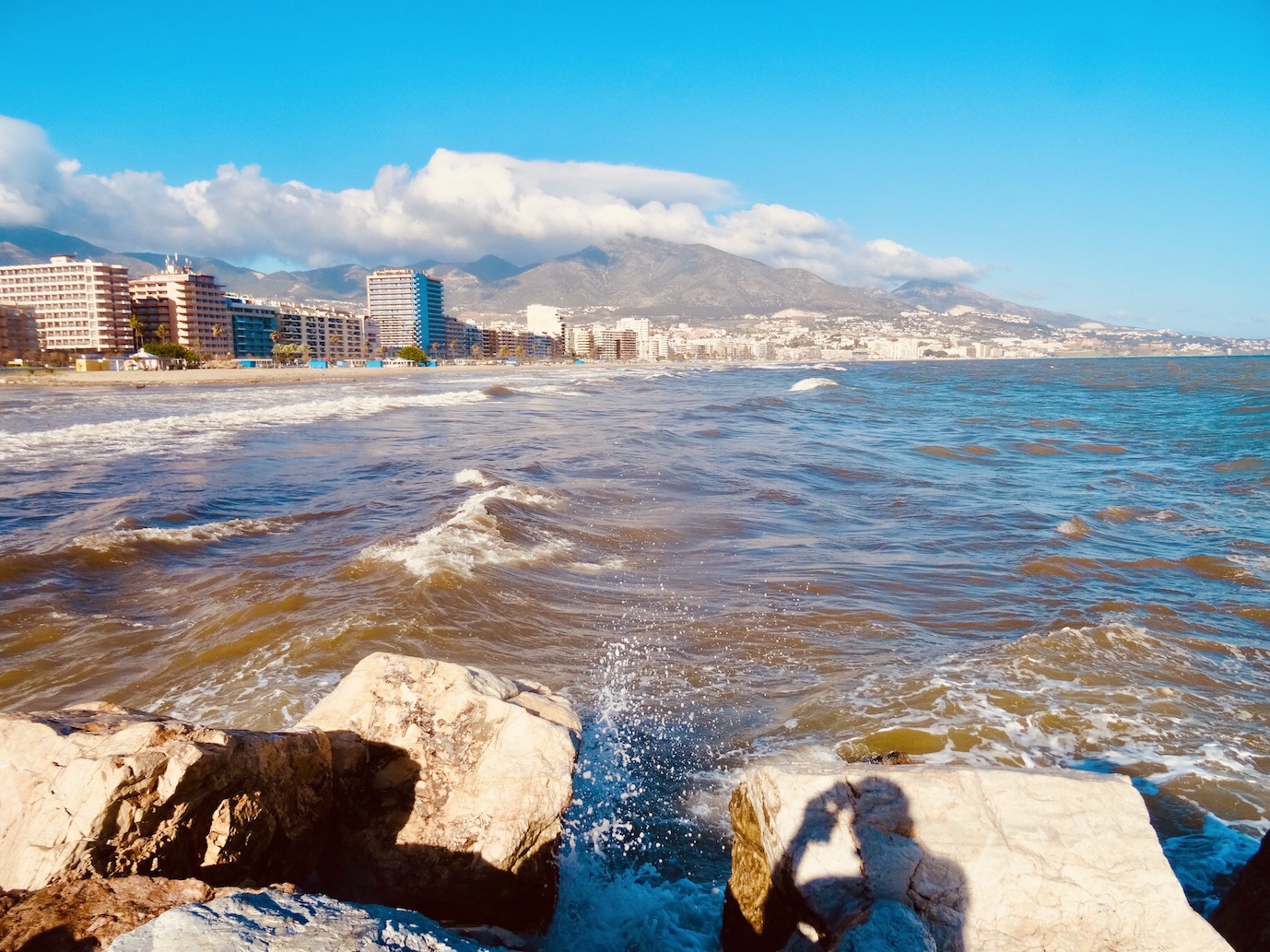 There are several rocky piers running off the beach. I decided to head down an empty one for a few shots back across the beach and town.

At some point, I realised the wind had picked up and the waters had gotten quite choppy. It was all very fresh, a shaking off of the internal cobwebs, so to speak. 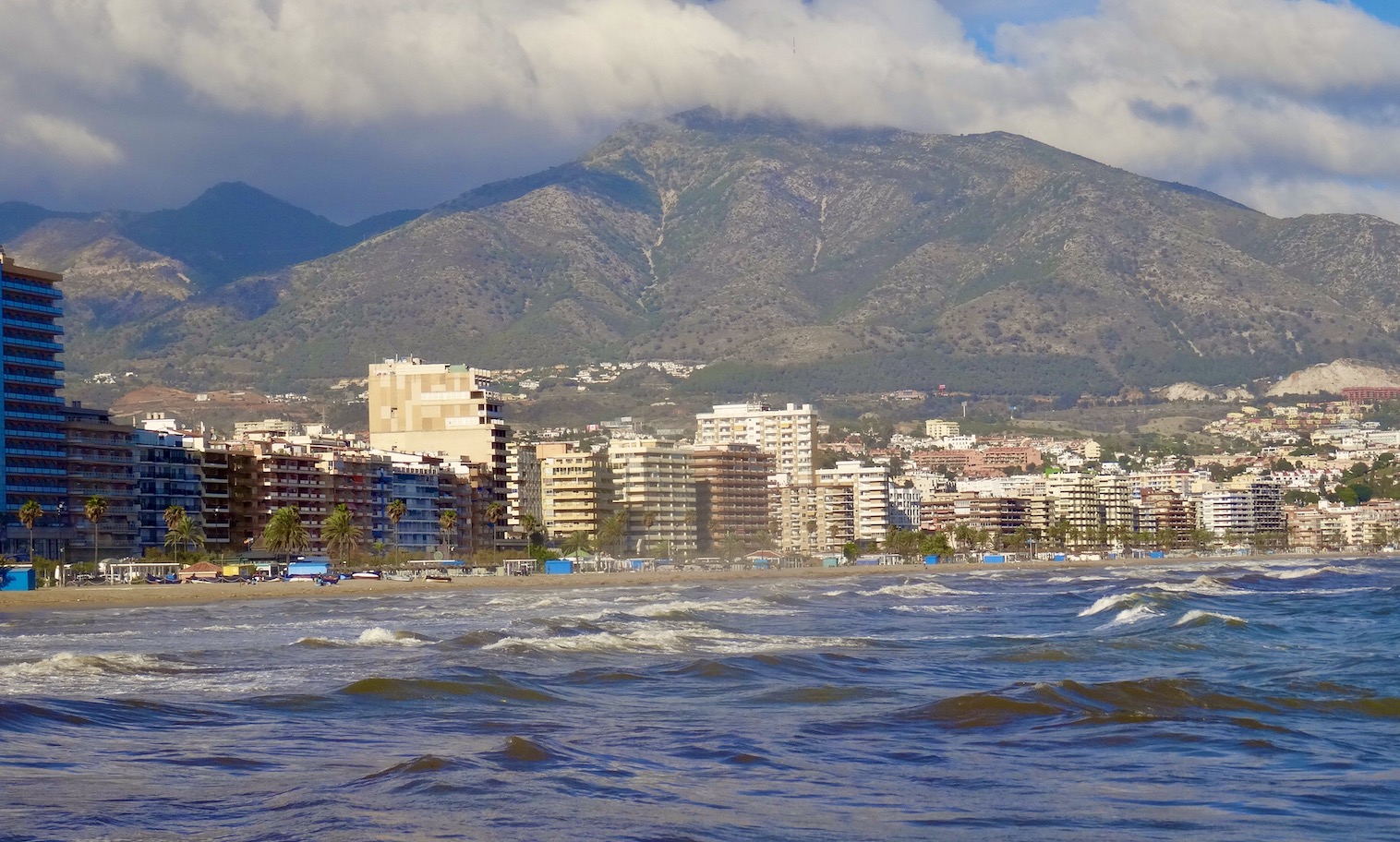 On my way back to the train station, I had a sudden craving for coffee and cake. I could have stopped at a hundred and one places. But in the end I settled on a corner table at Cafe Andino on Avenida Matias Saenz de Tejada. The resulting latte and chocolate fudge cake really hit the spot. 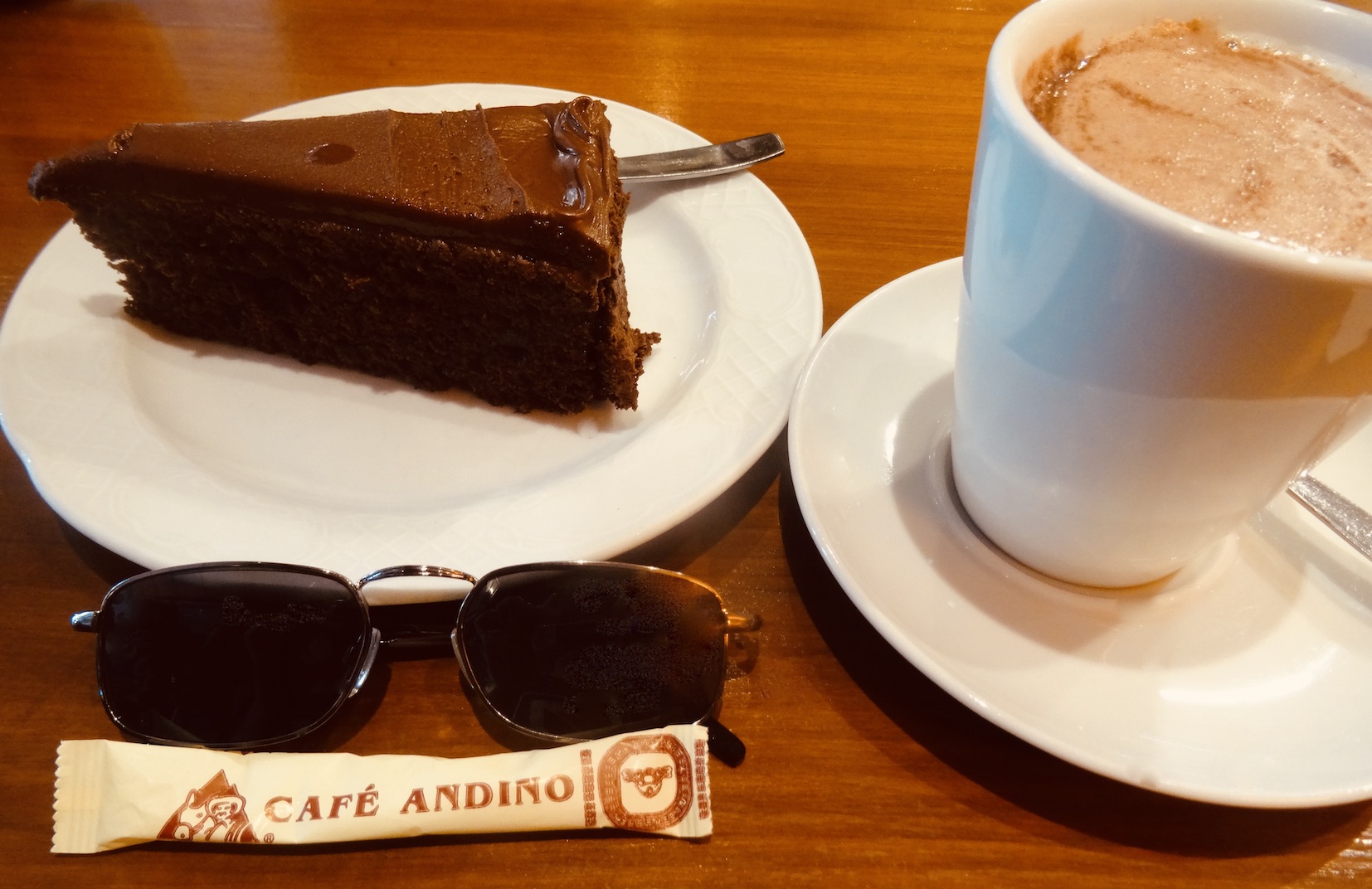 This is one of those occasions where I can’t say I got anywhere near seeing what Fuengirola had to offer. In addition to its beaches and old town, tourists come here for a number of nearby attractions.

These include Biopark Fuengirola, a naturalistic zoo with a jungle clearing, and Sohail Castle, an isolated hilltop ruin dating back to AD956. Sometimes, you just can’t do it all.