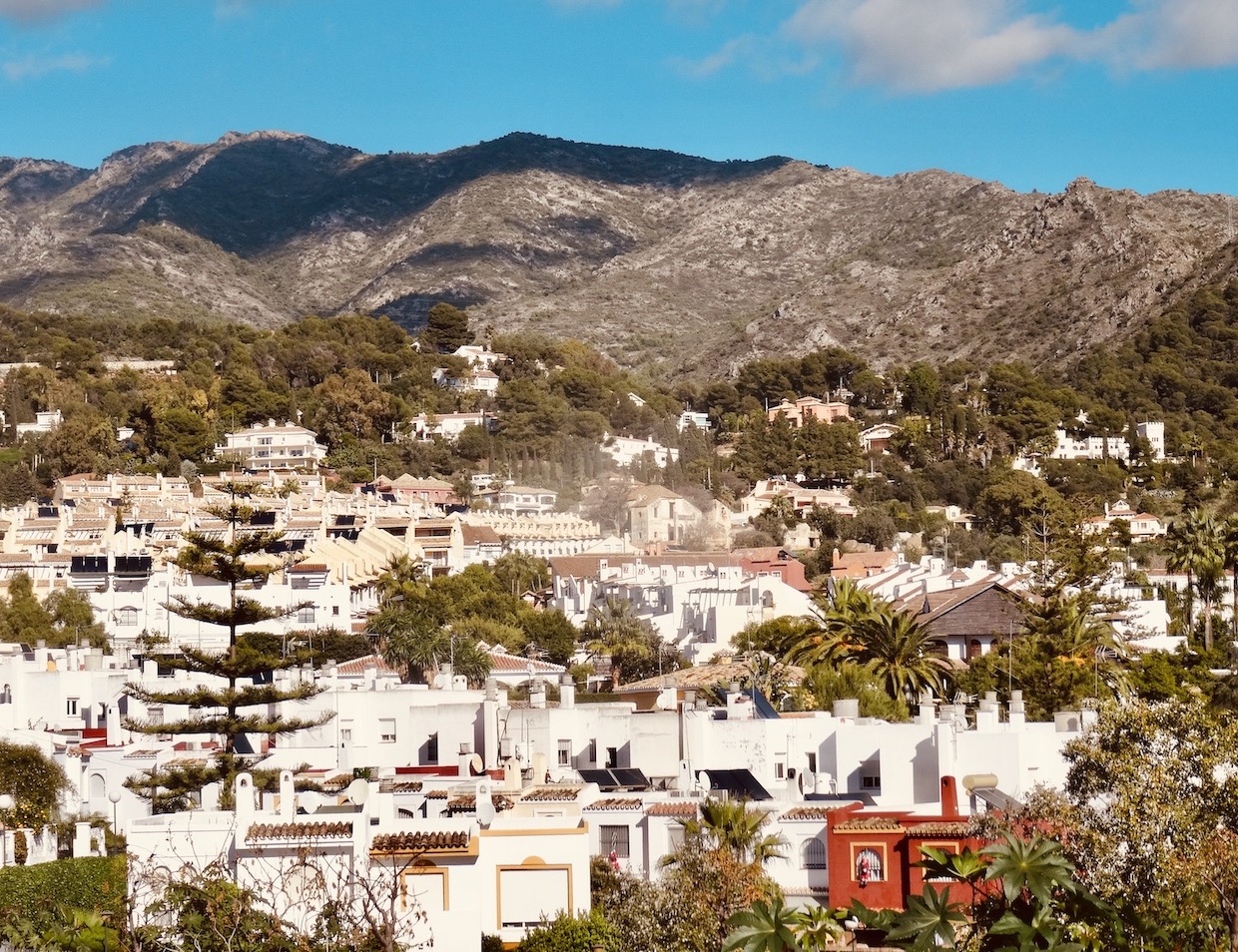 December 2016. My day trip to the Spanish city of Marbella came about quite suddenly on the back of an unfortunate mishap. The day before, I was in bed in my apartment in Malaga tapping away on my Mac.

I’d only been awake for half an hour and had just returned from the kitchen with a mug of freshly brewed coffee. Settling under the covers for a spell of caffeine inspired writing, I made the fatal mistake of leaving the bedroom door ajar. 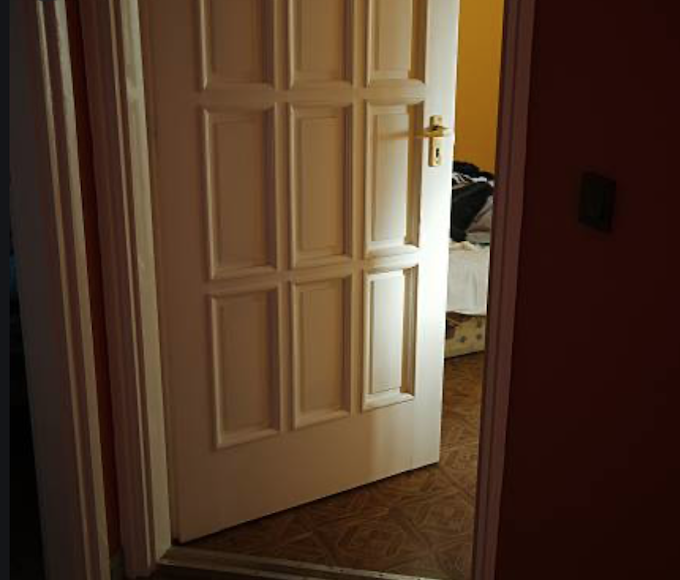 On such occasions, my cats Bill and Scarlett would come bounding in to say good morning. Bill was particularly affectionate with these good morning greetings. In fact, he would jump right onto my chest, squirm up to my face and literally sit kissing me relentlessly until I pushed him away. 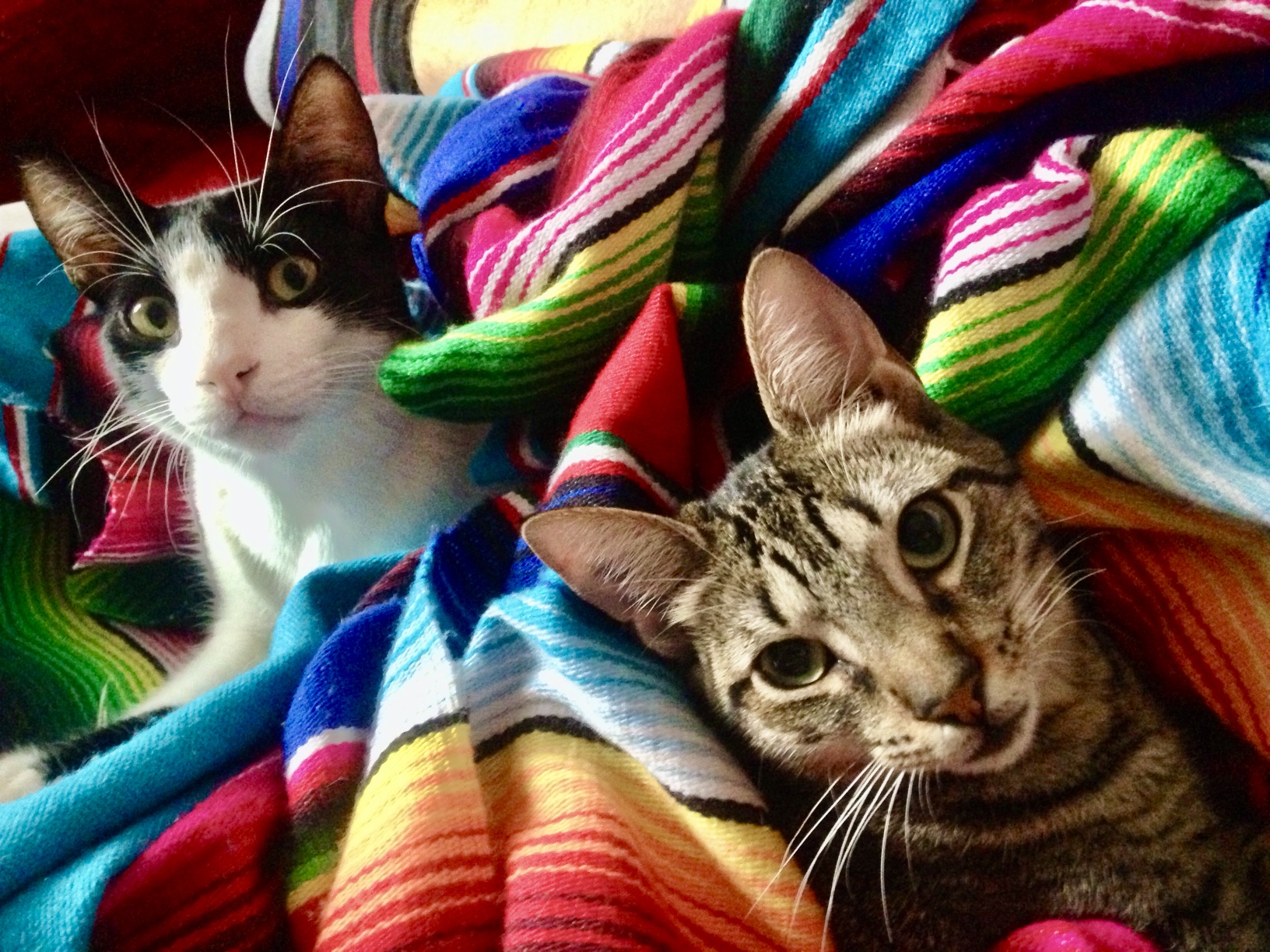 And that’s exactly what beautiful, black and white Bill did on that fateful December morning. Except this time he chose to launch his face into mine at the precise moment I lifted the coffee mug to my mouth for a sip.

Of course, this sent the cup spinning violently out of my hand. A large splash of Nespresso vanilla latte finding its way onto the keyboard of my Mac.

Subsequently, I spent the rest of the day trying to salvage the situation. Firstly, I switched the damn thing off and turned it upside down on a bed of paper towels. Then, I laid it in a box full of rice for a few hours. Eventually, I risked turning it back on to find that, miracle of miracles, it was still working! Although this initial joy soon dissipated when I realised it would no longer charge.

Hence I quietly set about searching for local repair centres. Dismayed to discover a horrendous waiting list for a tech appointment in Malaga, an online forum thread soon pointed me in the direction of Joe, an English guy with a highly recommended Apple repair shop in Marbella. 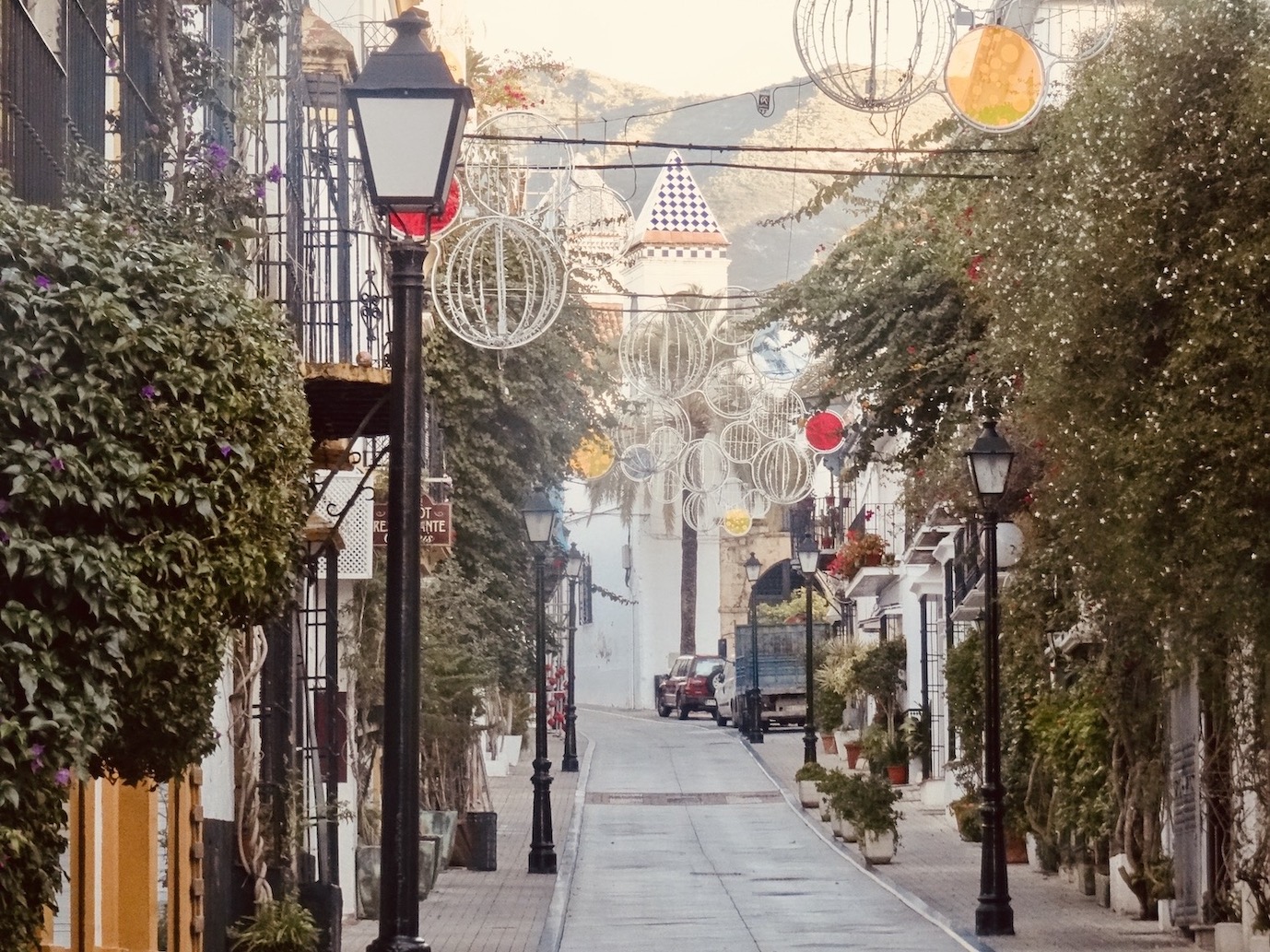 The next morning I woke up at the crack of dawn to get the first train from Malaga to Marbella. With my Mac safely installed in the back of my rucksack, I made my way through the empty city streets.

It was all so perfectly silent and pretty, particularly Calle Ancha with its Christmas lights, traditional street lamps and plant-covered townhouses. 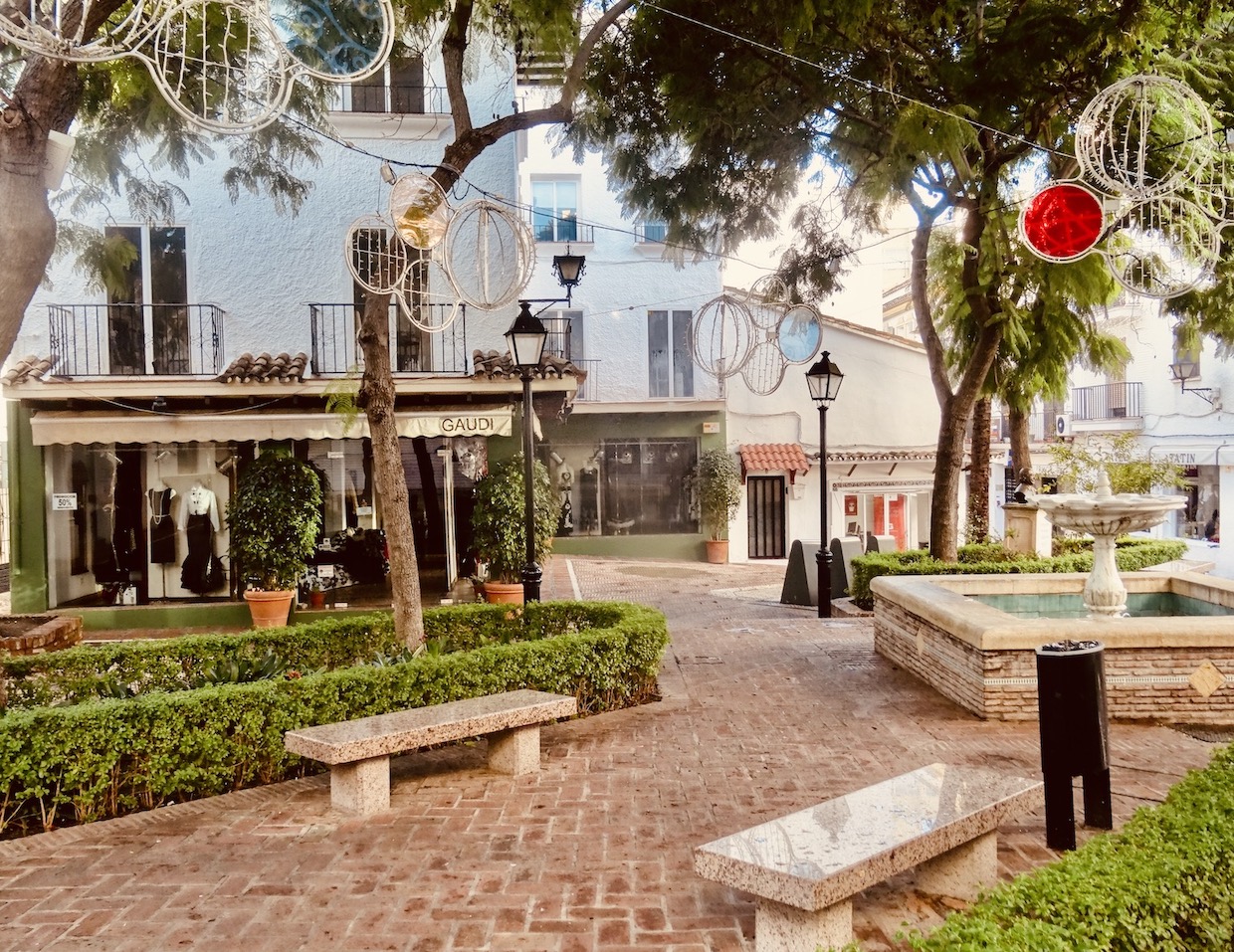 As agreed during our phone call, I met Joe on Plaza de la Victoria. This tiny little square is absolutely gorgeous, its Moorish fountain, clipped hedges and fancy clothing boutique nuzzled beneath a canopy of drooping branches.

In contrast, Joe was an unassuming and somewhat scruffy man. Softly spoken and with an honest face, he was able to immediately put me at ease. “Probably some damage to the motherboard” he said, taking a seat on one of the stone benches. “I won’t know how much until I’ve had a look. But don’t worry, whatever it is, I will get this sorted out today”. 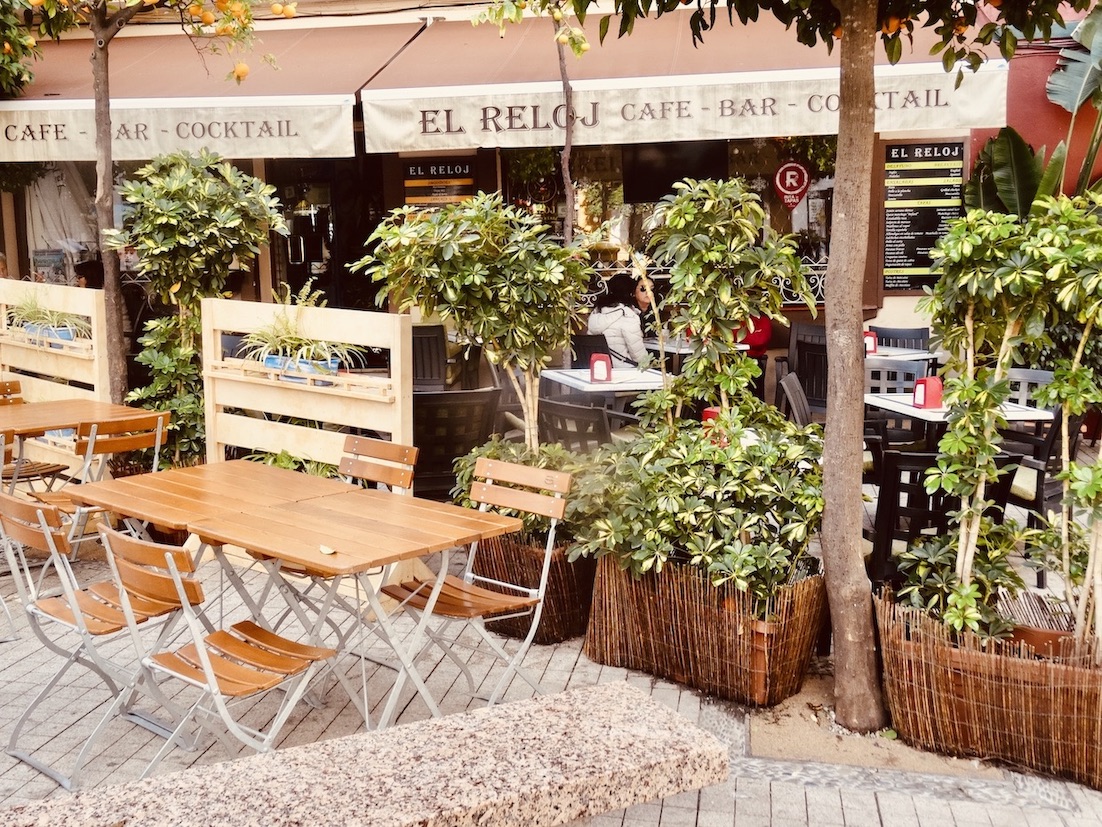 With Joe having departed to work his magic, I was left to my own devices for the day. By this point one or two cafes had begun to open, including a charming family run business called El Reloj Cafe on Plaza Puente de Ronda. In Spanish, Reloj means clock and indeed there are a number of antique clocks within the poky but cosy interior.

I went for an English breakfast with a Spanish twist, namely the inclusion of chorizo and sun dried tomatoes. It was decent, although the miserable waitress ensured I had no desire to hang around after my last bite. 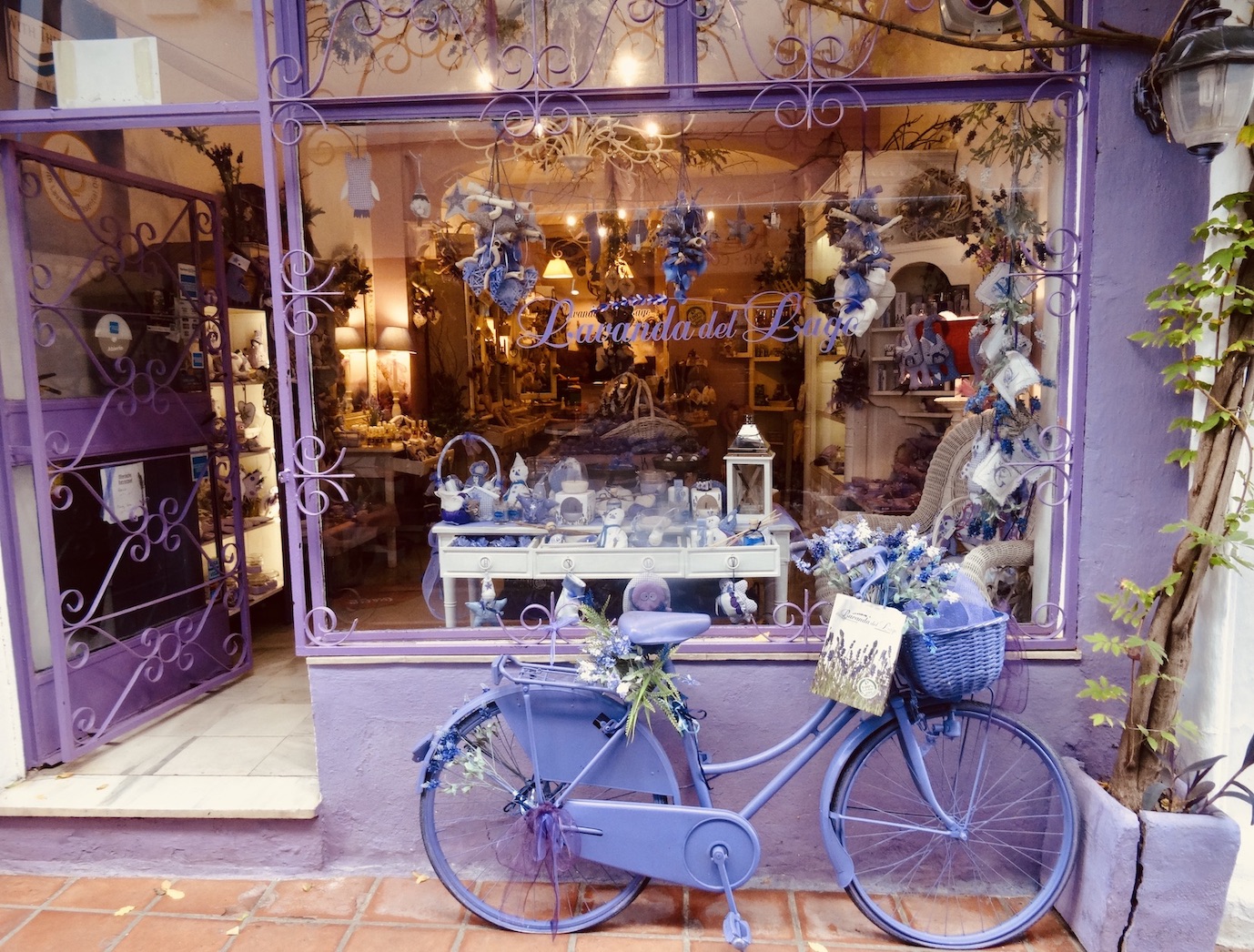 And then I was off for some exploring around the old town. With all the drama of MacGate, I hadn’t given a thought to Marbella itself, the most glamorous and moneyed of The Costa del Sol towns. 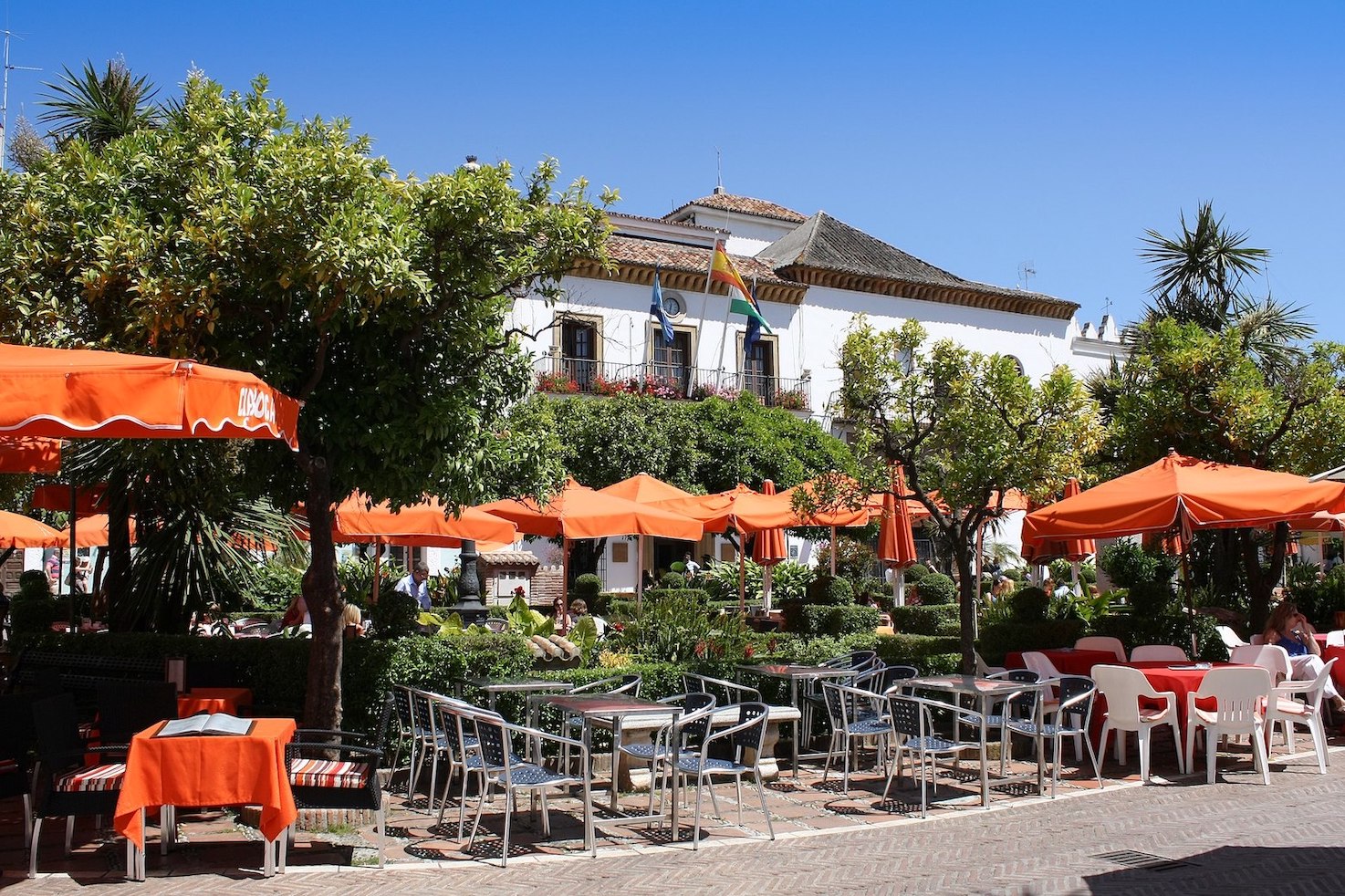 Some of Marbella’s squares are picture perfect, especially with all the whitewashed houses and their terracotta roofs. Plaza de Los Naranjos (Square of the Orange trees) is perhaps the prettiest of all, a veritable jungle square home to cafe after cafe after cafe. 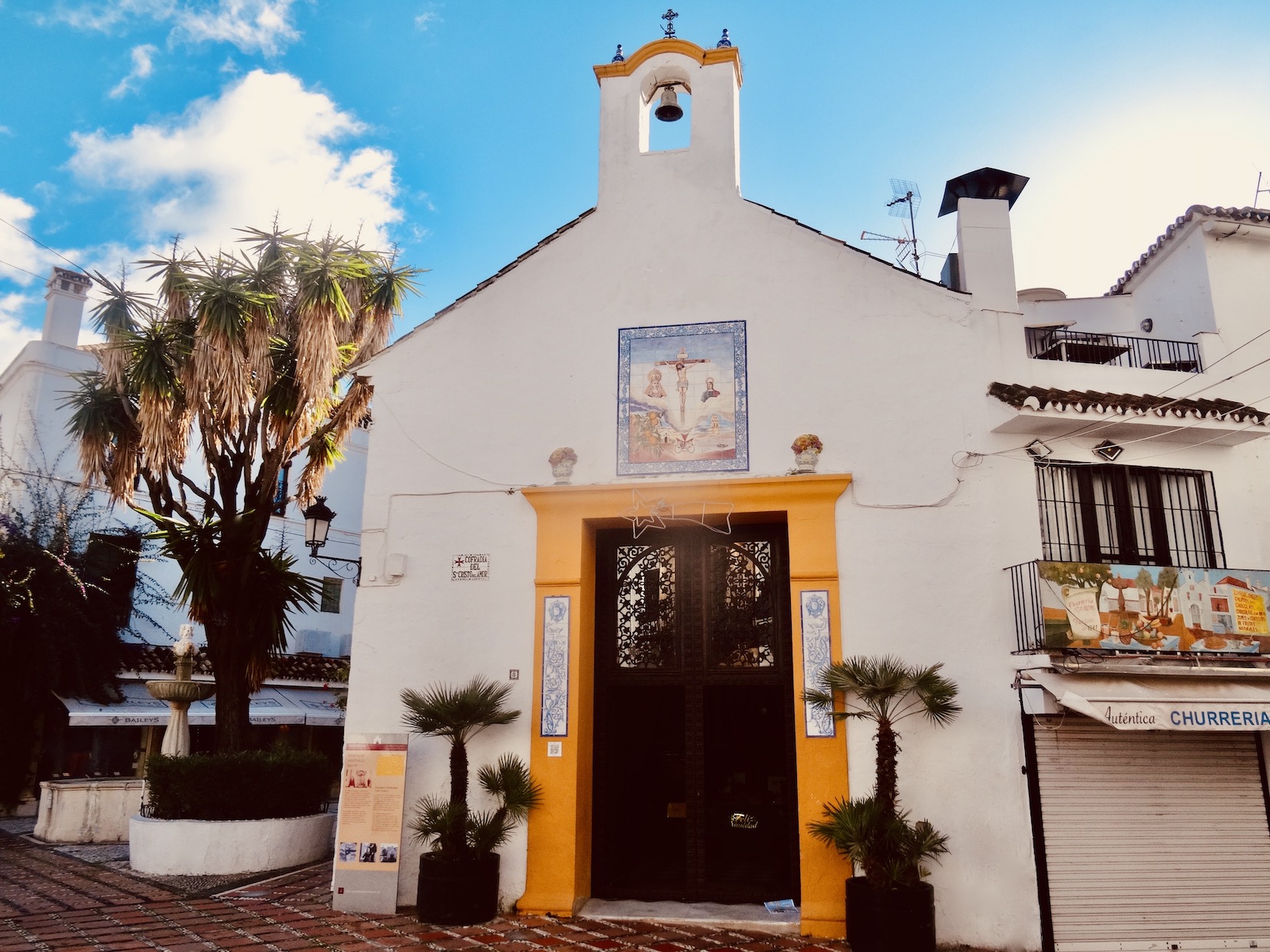 Unable to enter either, I made do with a look inside Ermita de Santiago, Marbella’s oldest religious building. The interior, with its singular rectangle nave is certainly tiny, but nevertheless beautifully decorated with Islamic tiles. 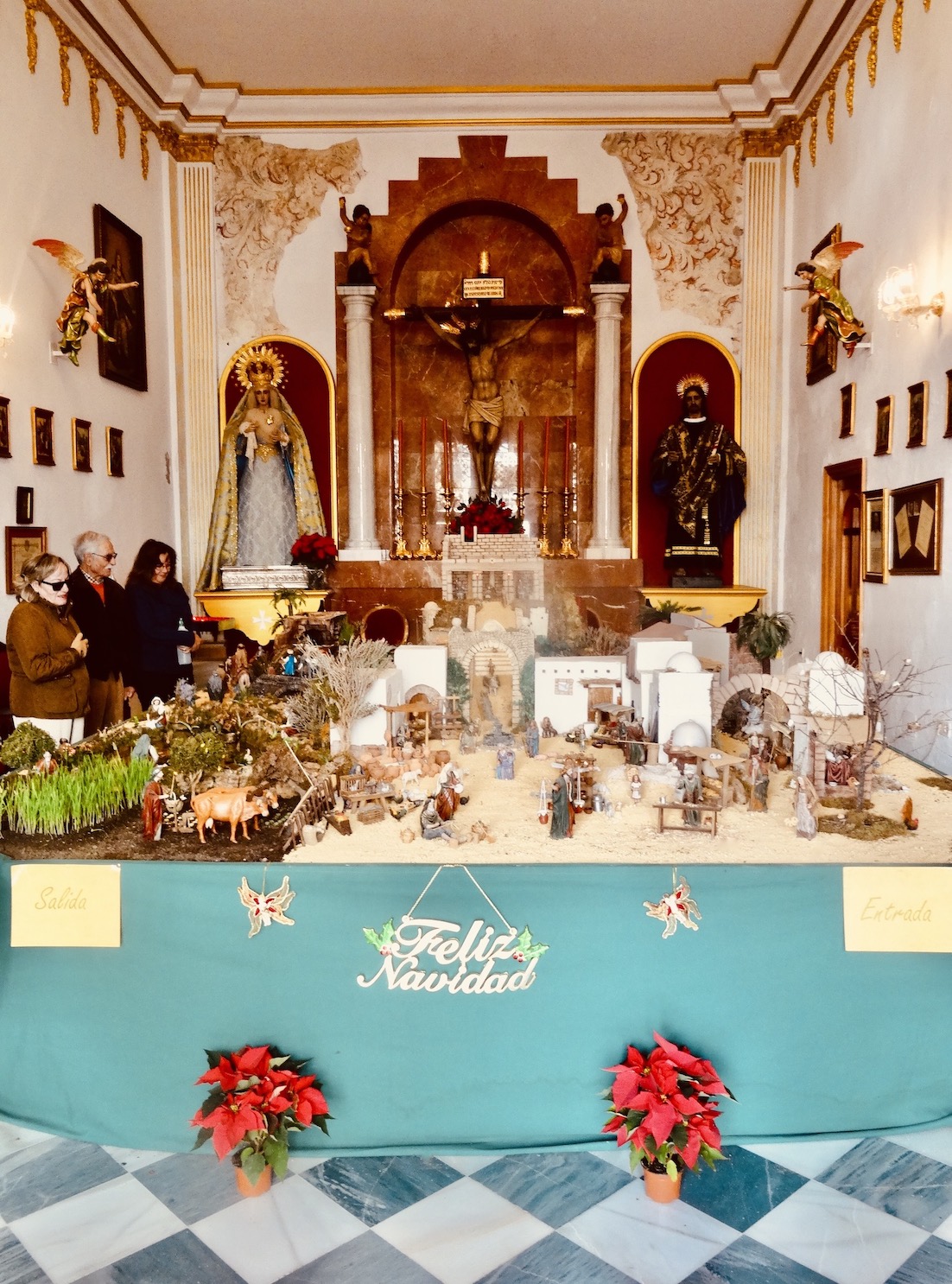 Space was even more at a premium that afternoon, with most of the interior taken up by the most impressive model nativity I’ve ever seen!

It was huge and highly detailed, with moving parts. Everything handmade by local churchgoers and volunteers, according to a trio of chatty visitors. 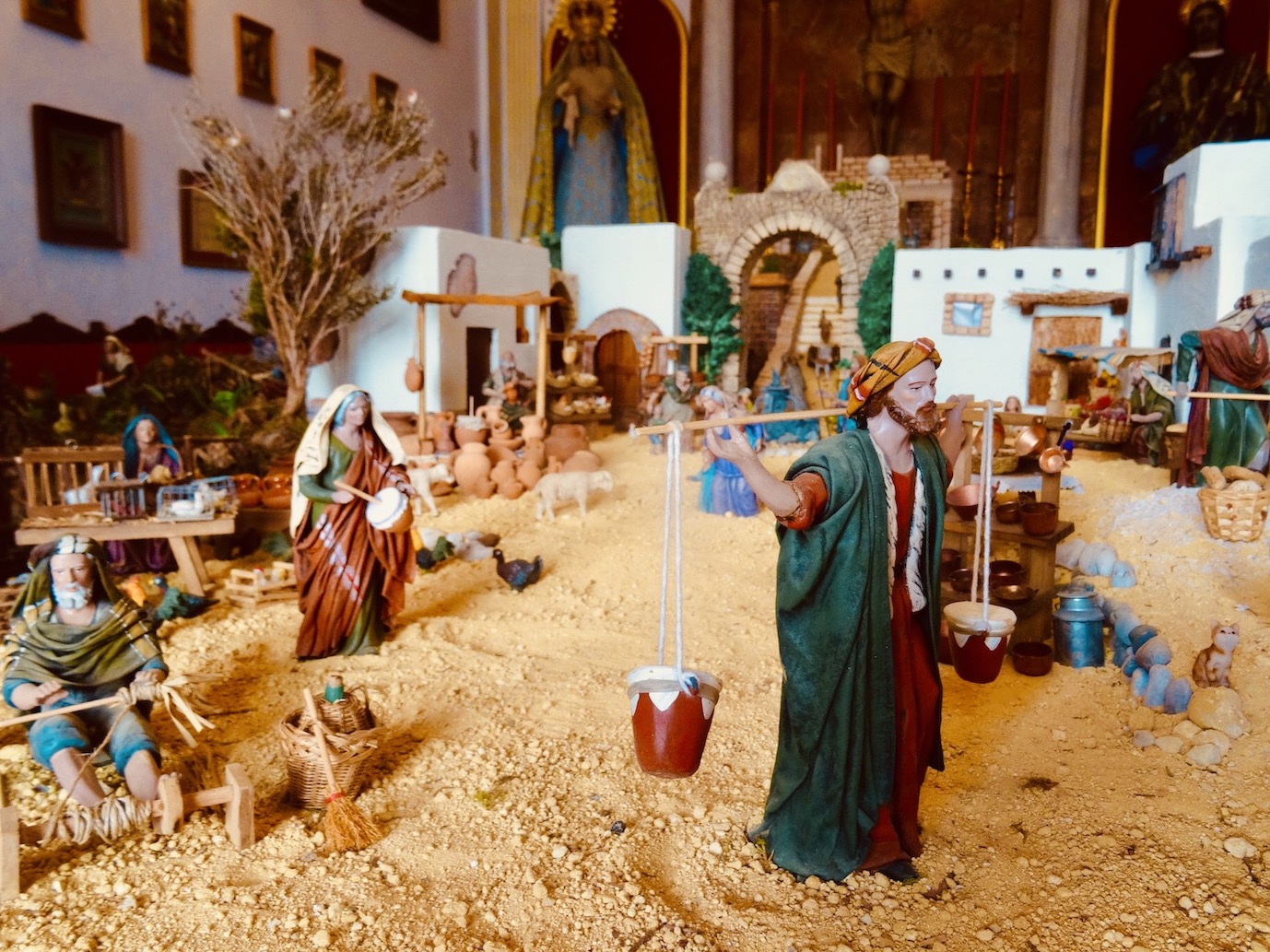 A short while later I came upon the much larger Our Lady of the Incarnation Church. Built in 1505 upon the site of a former mosque, this cathedral-like structure takes up all of Plaza de la Iglesia. Local authorities added a bell tower in 1618 before decorating it with a large clock in 1813.

Church of the Incarnation. 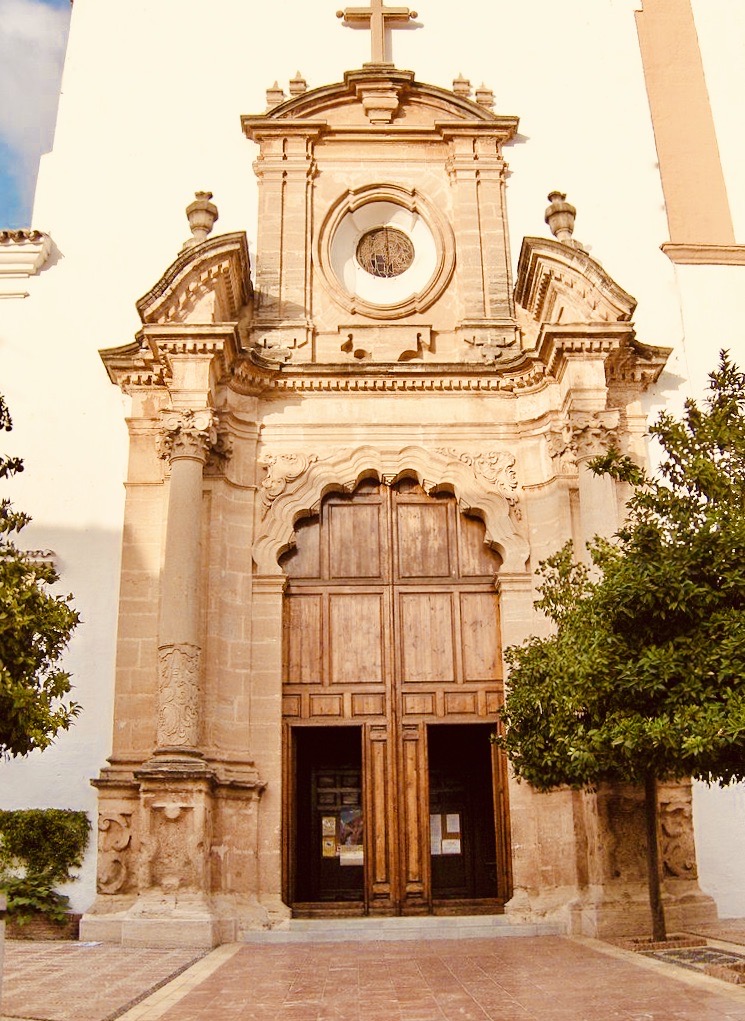 Church of the Incarnation.

The church’s name is a reference to the fundamental basis of Christianity in contrast to the doctrine of Mohammed, who denies the incarnation. I had only just begun admiring the lavish interior, with its stone pillars and gold leaf altar, when my phone rang and I had to scurry out. 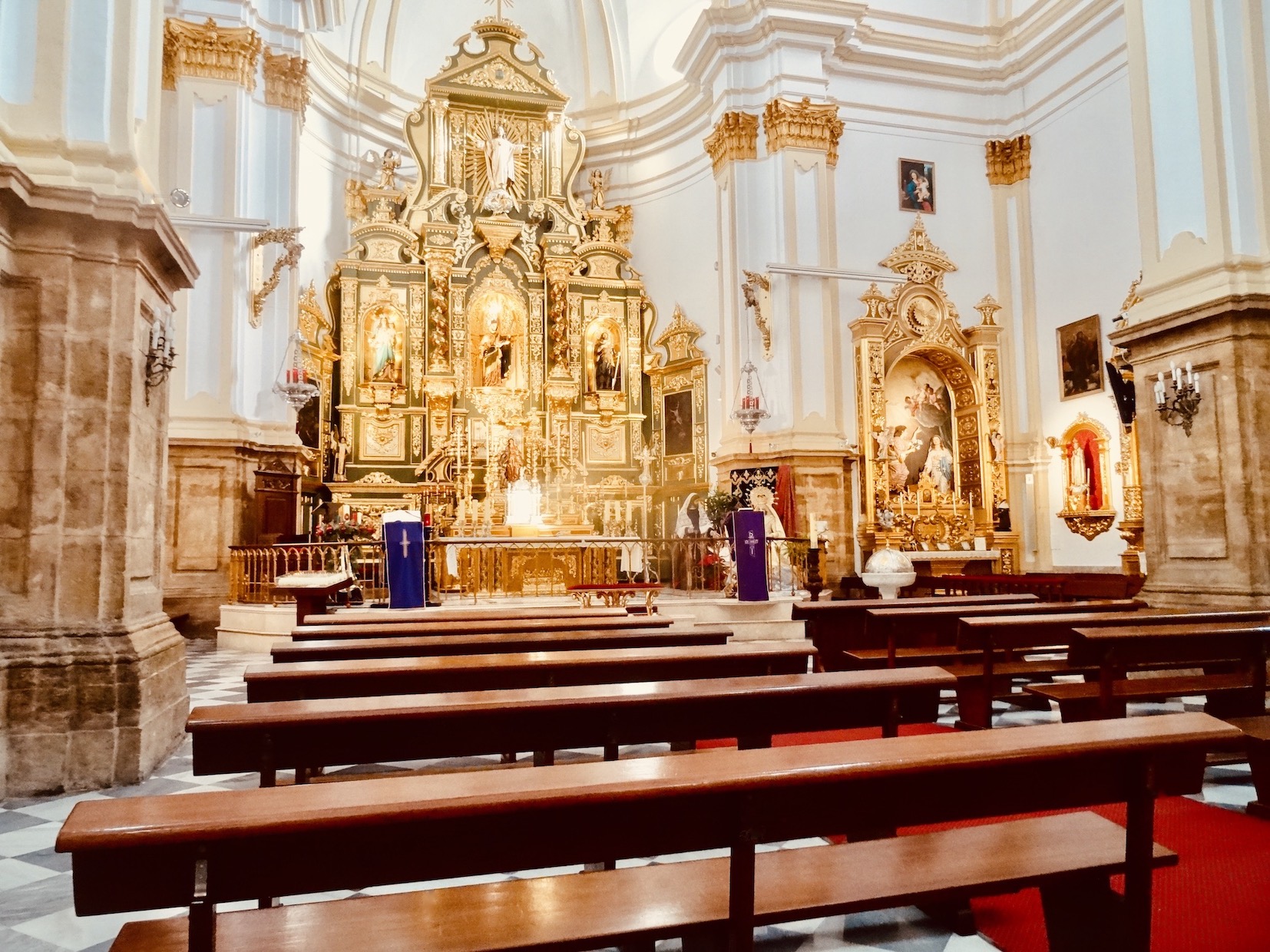 It was Joe with good news on the Mac front. Luckily, only a small part needed replacing and he could return it to me within a couple of hours. Having agreed to meet back up at the same square, I set off towards the beach with a spring in my step.

Along the way, I passed the wonderfully cute Carmen, a wide, whitewashed street featuring a wall of potted geranium plants. Just gorgeous. 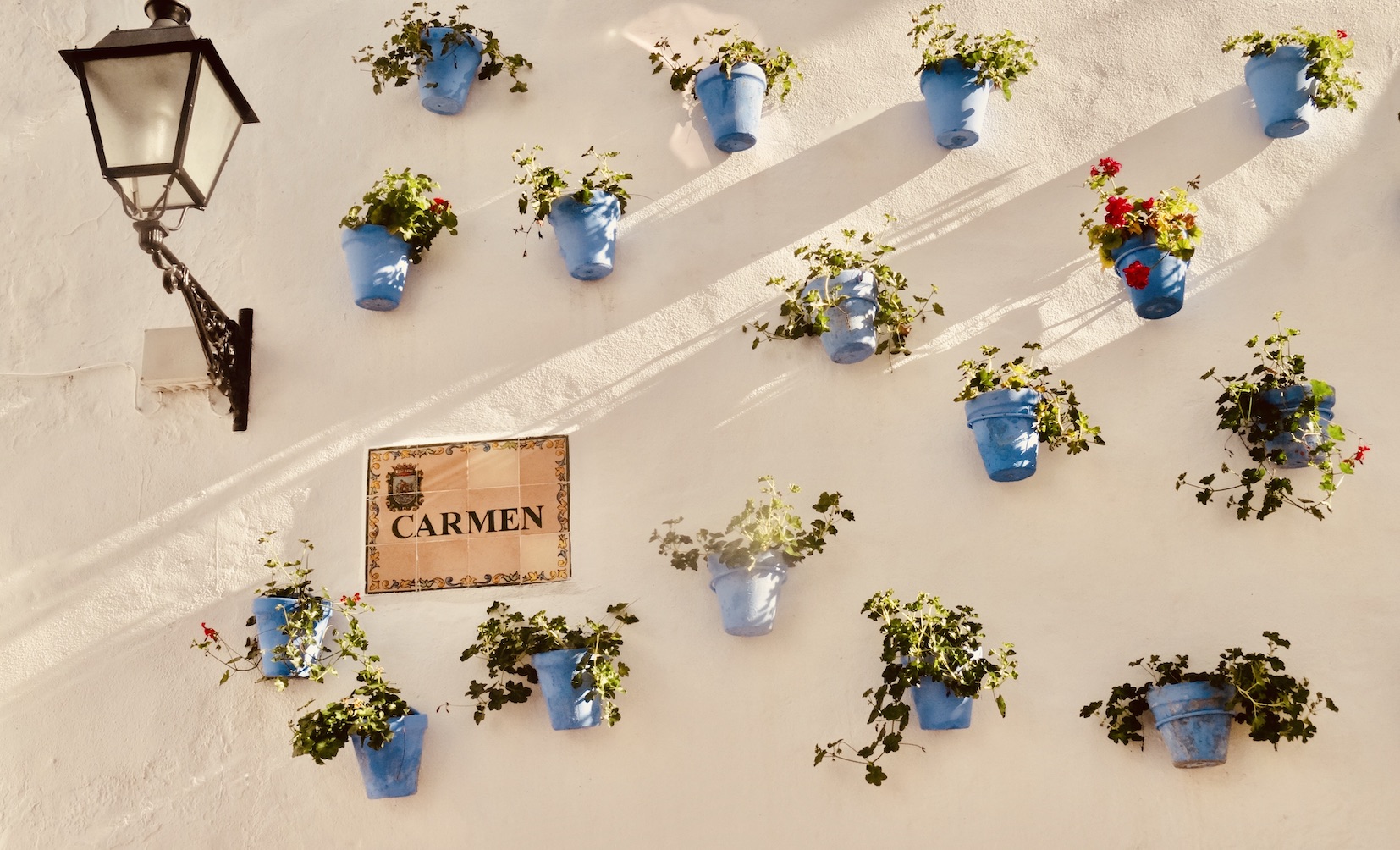 Meanwhile, having ducked down a charming, plant-laden alley, I came across a religious goods store called La Paz. Marbella’s old town is home to around a dozen of these stores. But it’s La Paz that stands out from the crowd due to its size and the scope of its products. Inside, there are original and replica paintings, angel figurines, candle holders and giant wooden crucifixes. 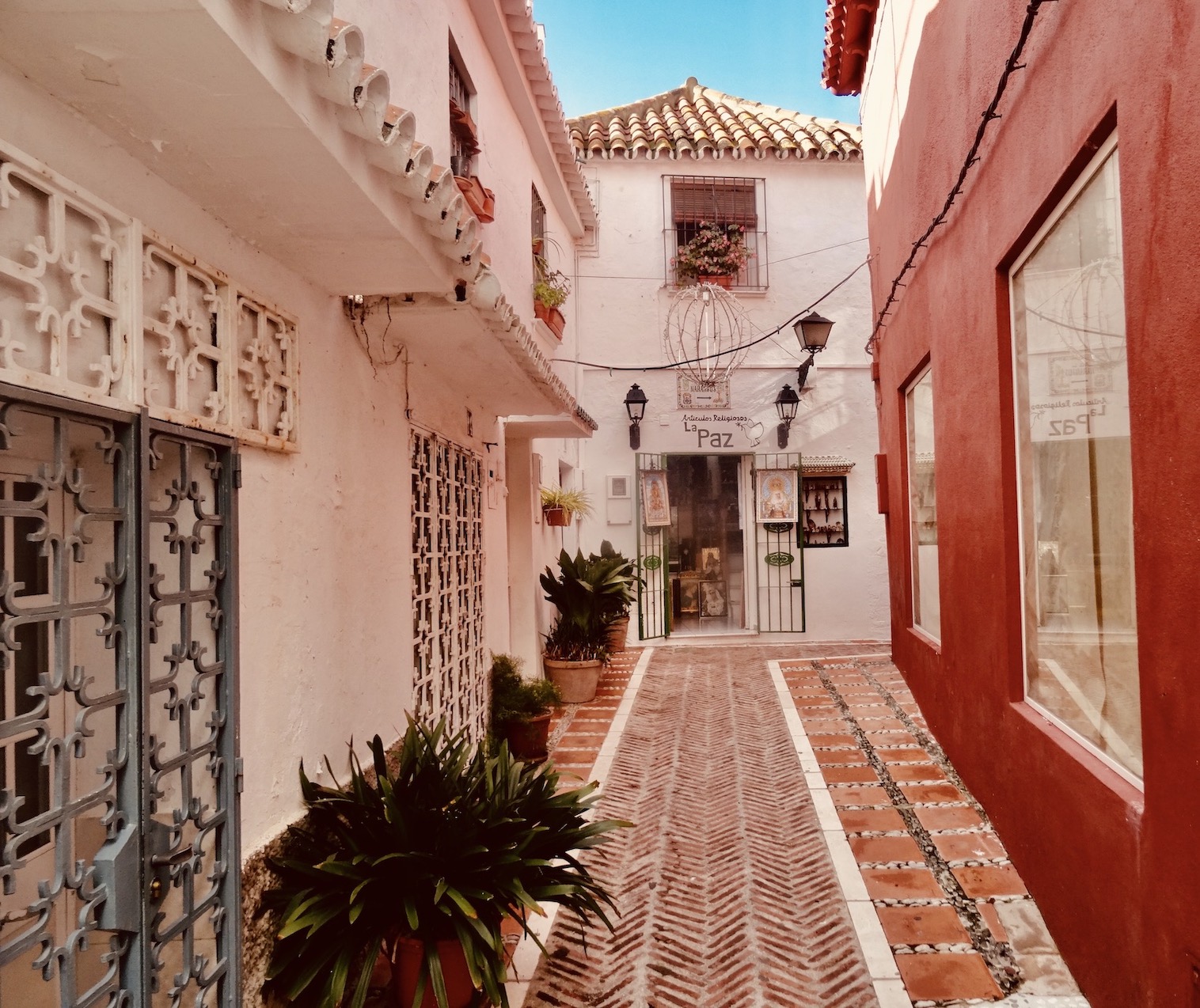 Moreover, they’ve got lamps, clocks, key rings, puzzles, mouse mats and postcards. It’s an attraction in its own right, whether you’re religious or not. Though I was disappointed by the owner’s strictly enforced no photo policy. 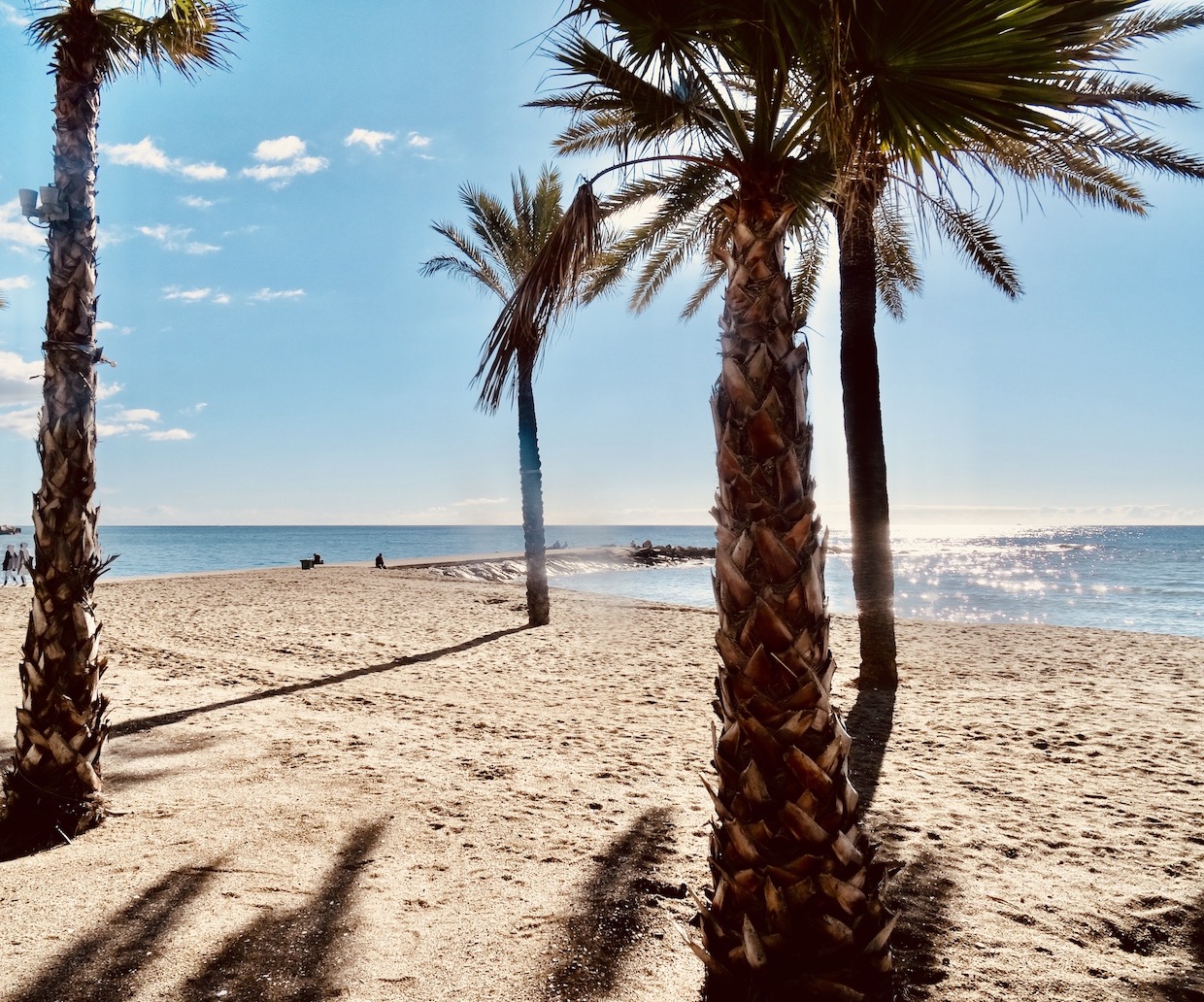 They say Marbella’s best beaches lie on the outskirts of the city. Unfortunately, I had to settle for Río Real Beach, the city centre’s stretch of golden sand.

Not that I was too disappointed, as it was easily the most handsome beach I’d seen so far from my travels across The Costa del Sol. I especially liked that it was a walker’s beach, with fine unobstructed views across The Mediterranean Sea. 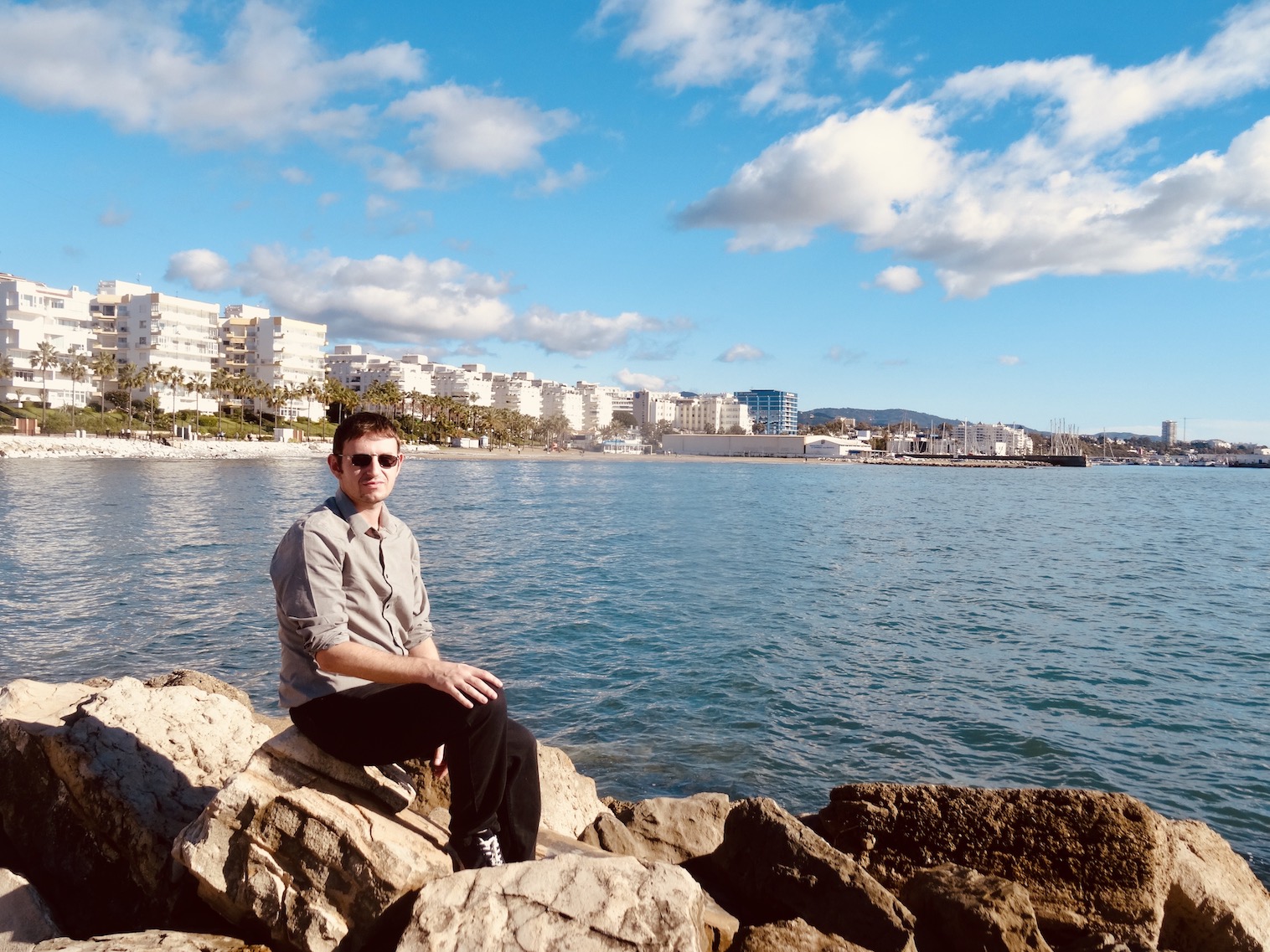 Just as I did in Fuengirola, I headed down one of the rocky piers that run off the beach. An obliging fisherman agreed to take this shot for me. It was easily the best CDS skyline I’d seen, as these high rises were at least whitewashed and altogether less hulking than those eyesores in Torremolinos. 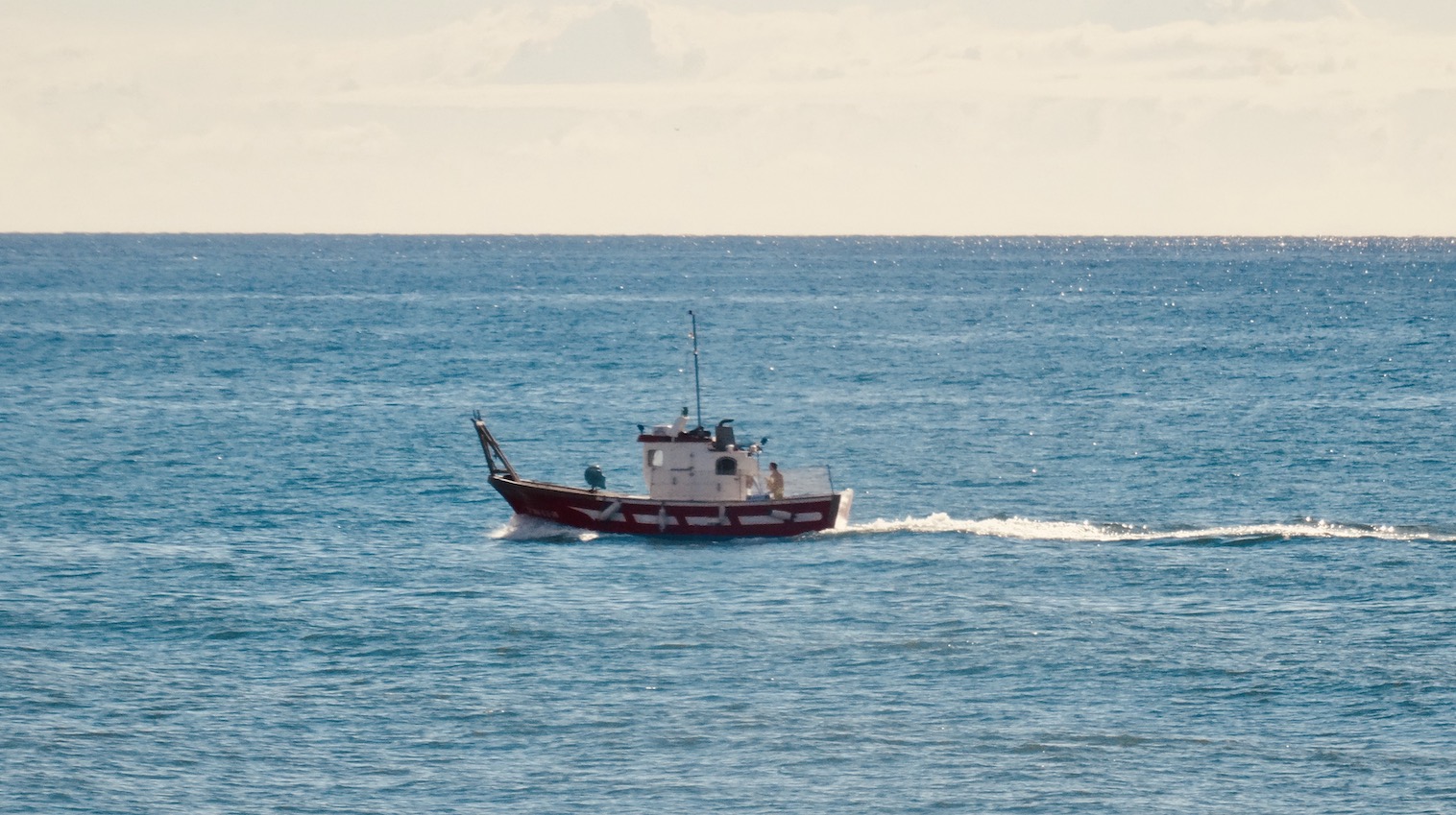 Out on the sea.

As I sat there watching a lone boat chugging along the turquoise waters, I realised I had loving, clumsy Bill to thank for my trip to Marbella. With the zillion and one travel projects I had going on in Andalusia, I may have never gotten round to ticking this one off.

In the end, I managed to spend just enough time here to get a taste for the place, and of course fix my Mac. Cheers to both! 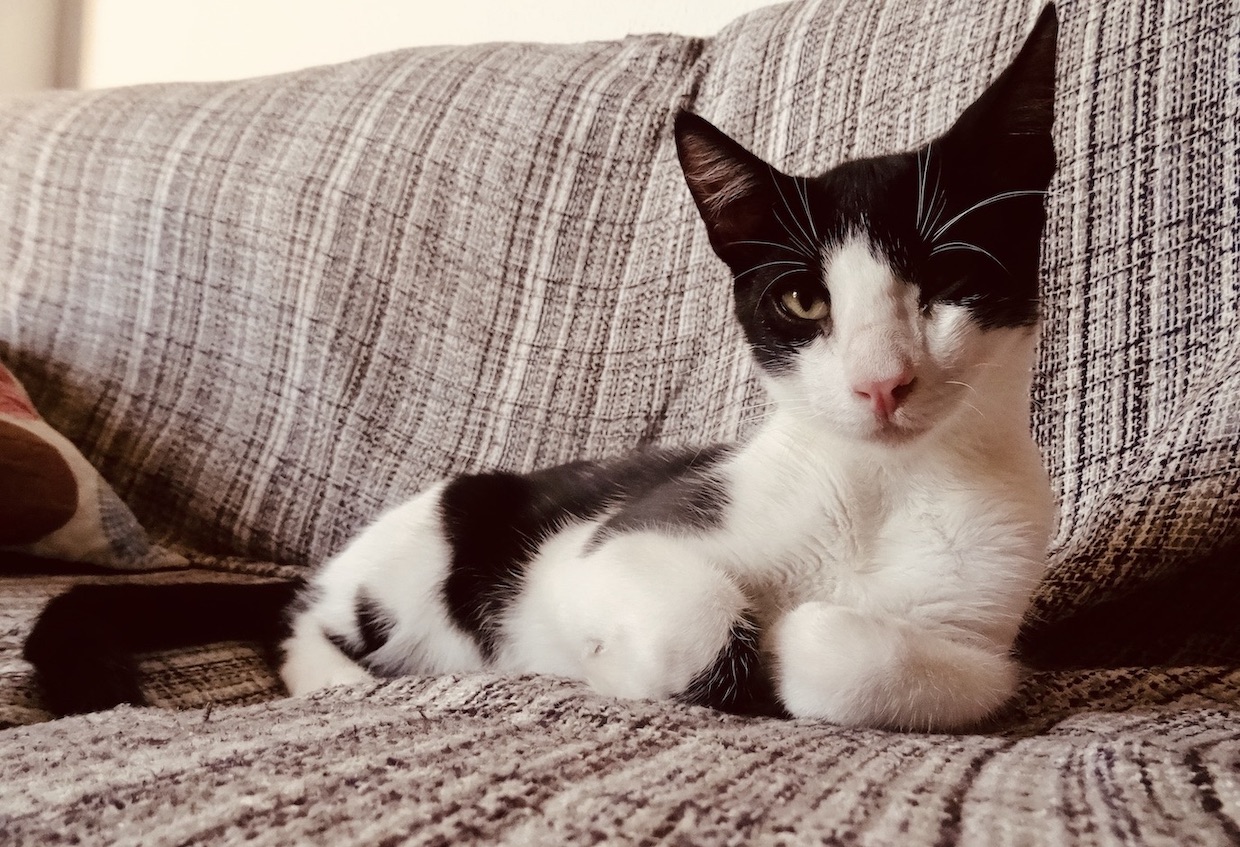 Bill: He’s got one eye on your Mac.