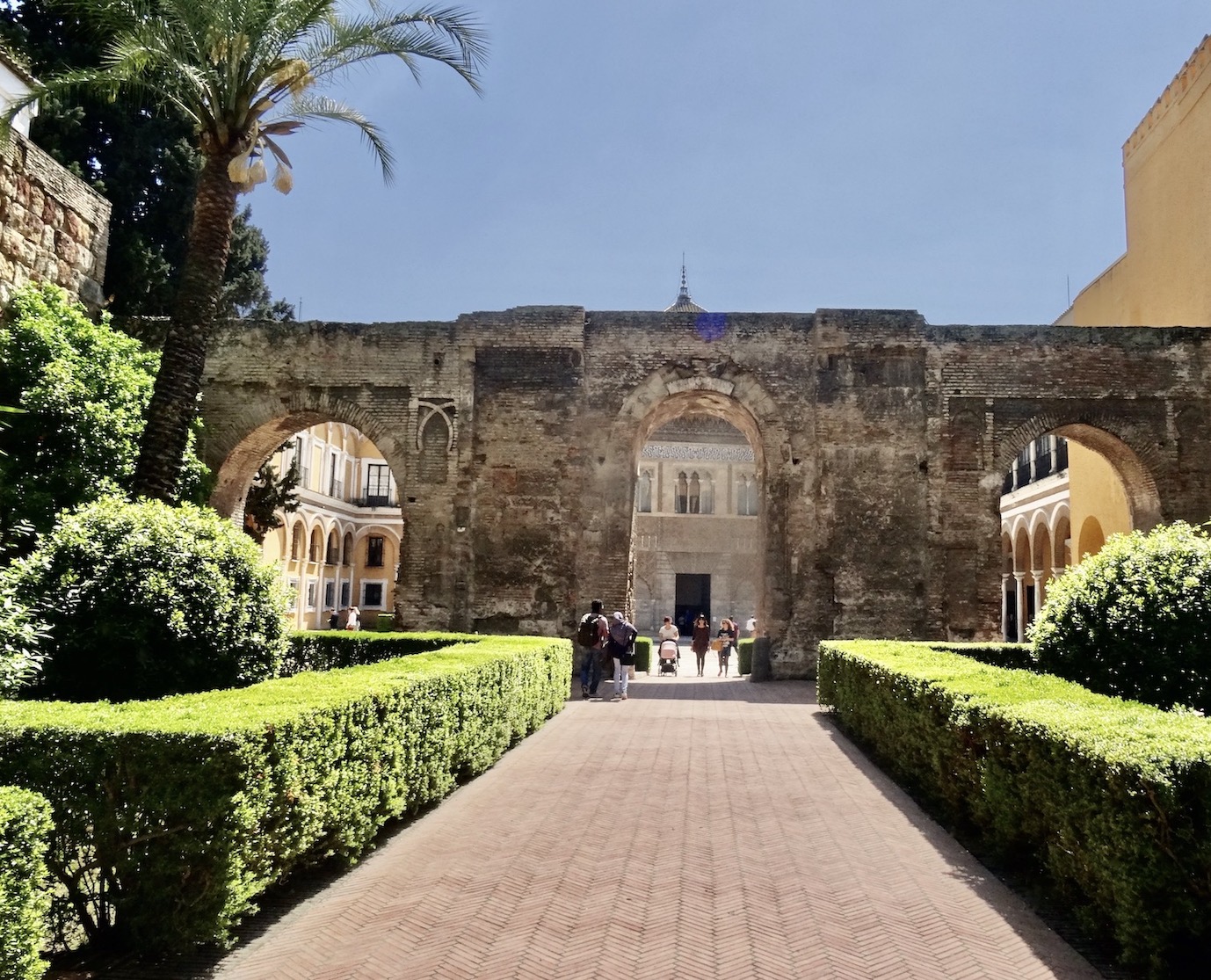 March 2017. It’s not every day you get to visit a royal palace with a thousand years of history! However, if you’re lucky enough to spend some time exploring Andalusia, you could grab yourself two in the space of a few weeks. That’s what I managed to do in the spring of 2017. Having seen the marvellous Alhambra in Granada, it was now time to note how Seville’s architectural wonder shaped up in comparison.

The Alcázar’s long, dramatic story can be traced back all the way to 913 when, much like The Alhambra, it began life as a fortress. The first caliph of Andalusia, Abd al-Rahman III ordered its creation on the remains of a Visigothic Christian basilica. 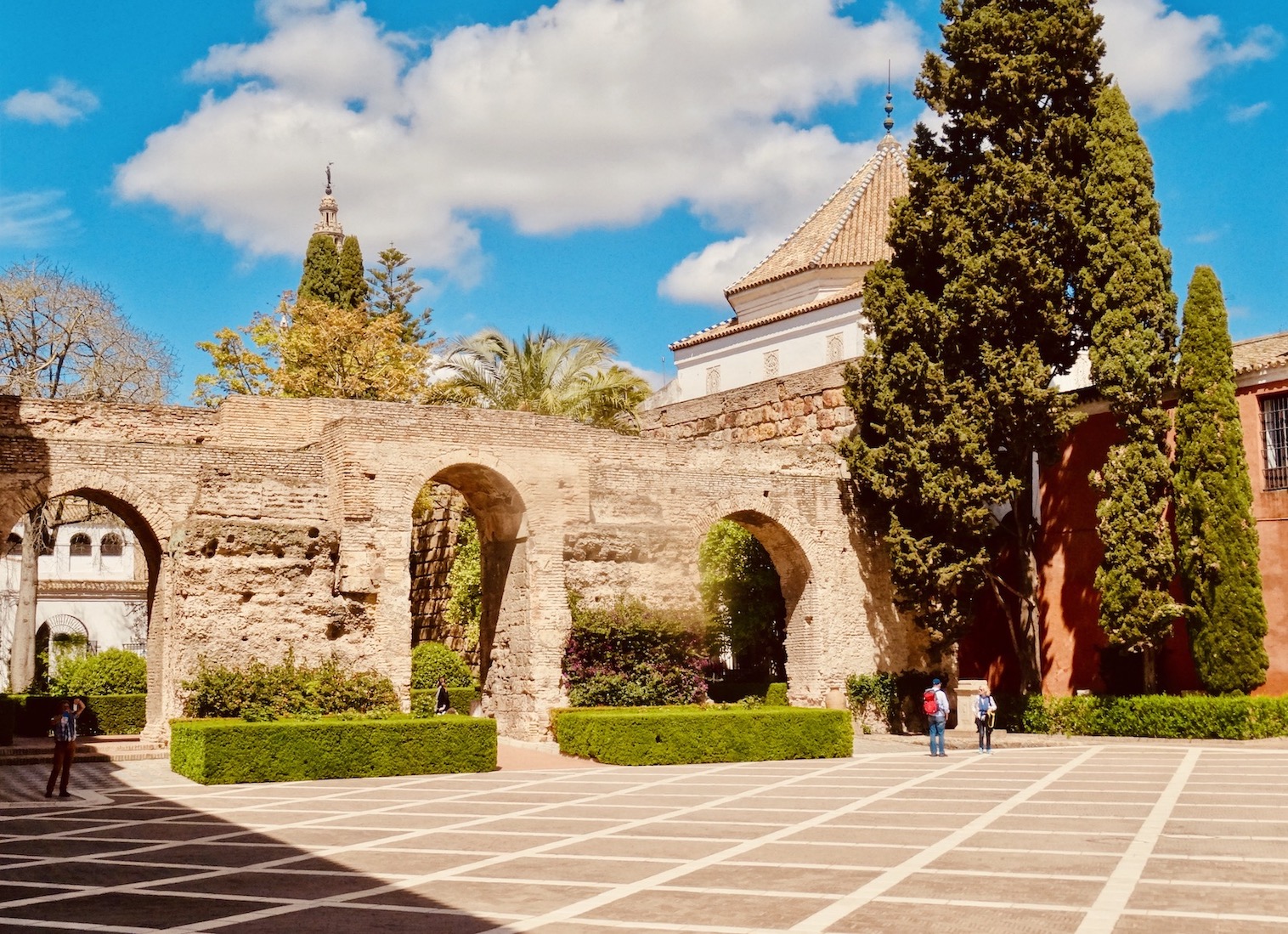 From there, even a potted history of the palace makes for some rich reading. In the 12th century the ruling Almohad Caliphate transformed it into an opulent Islamic palace, while by the 13th century the Christians swept in.

They claimed the palace for Spain’s Catholic kings and set about adding stunning expansions of Gothic, Renaissance and Romanesque designs. This cauldron of styles, along with retained Islamic elements, gave birth to a new breed of architecture called Mudéjar. Which is largely responsible for why today’s palace is such a fascinating sight. 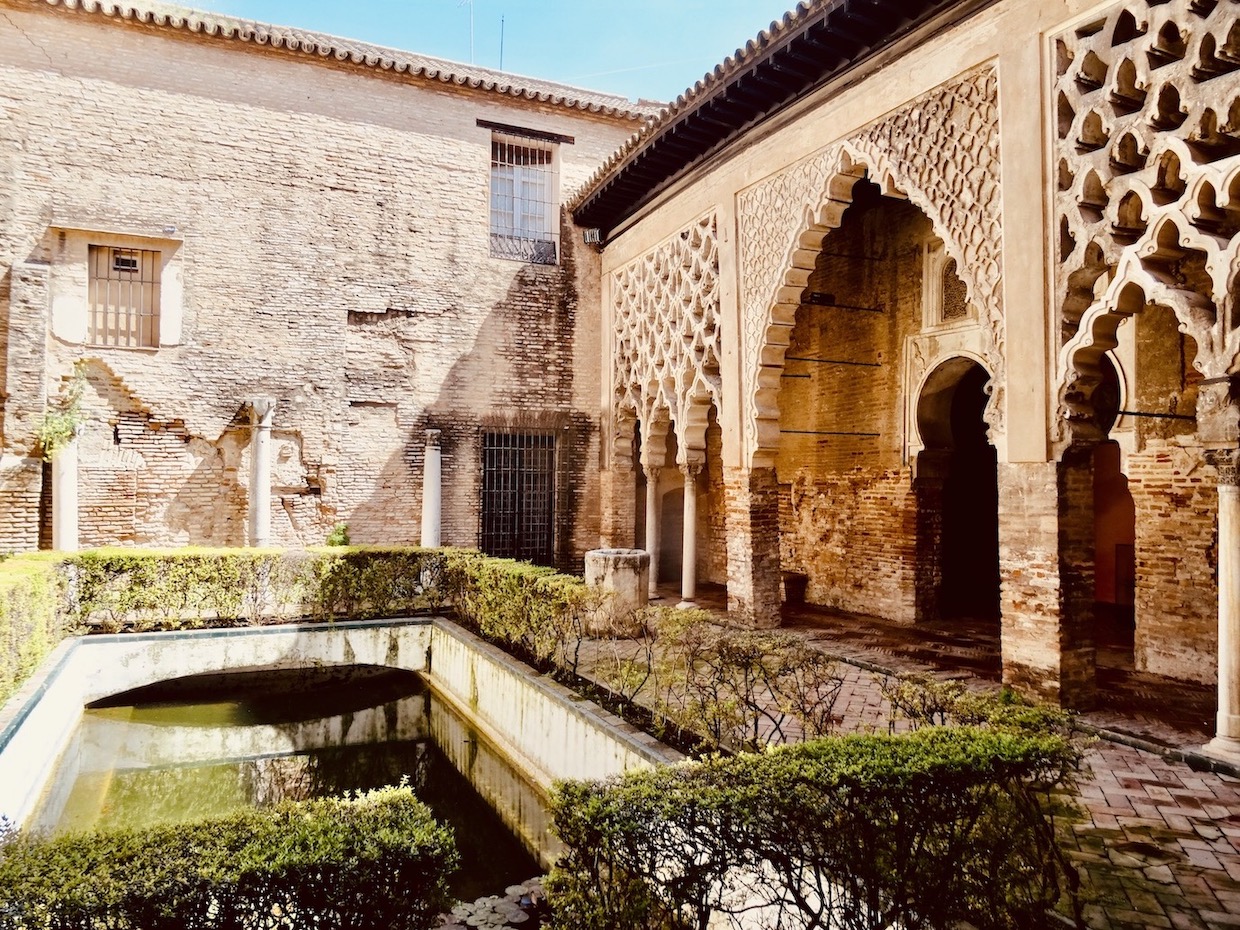 Somehow, even within the first few courtyards, I sensed The Alcázar was a more intimate affair than The Alhambra. Firstly, it’s undoubtedly smaller in scale, not to mention much less hectic. In fact, one could even call it cosy.

The above shot shows Patio del Yeso, one of the few remaining purely Islamic courtyards. In the mid 1300s King Pedro I resided in one of the rooms leading off the courtyard, while construction of new palace wings took place. 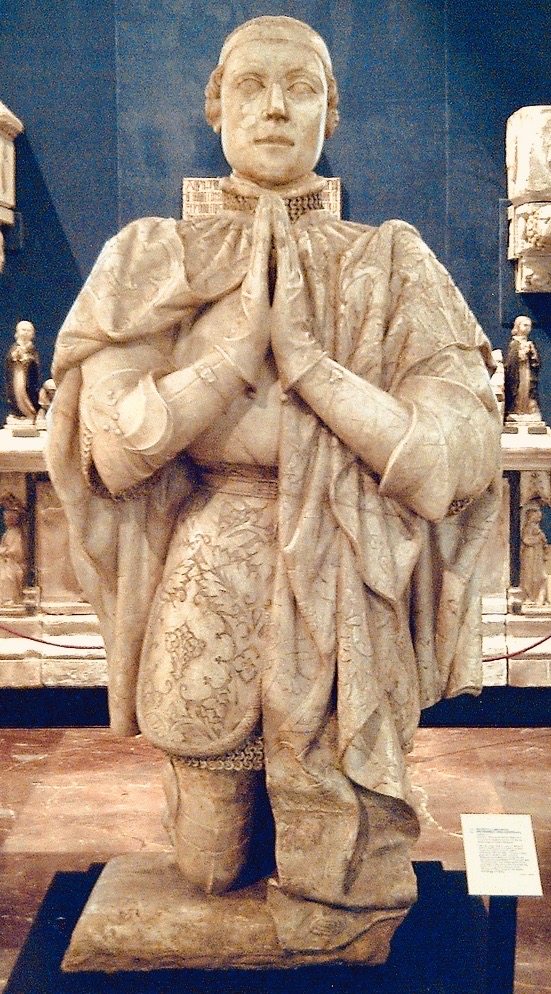 Incredibly, The Alcázar is still in use as a royal palace! From time to time, visitors may find the place closed to general entry because of visiting state officials. Moreover, a wing of upper residential suites is still available for members of The Spanish royal family.

Here and there, as you stroll the various tiled corridors, you might see a security barrier separating general passage from other corridors leading to the royal quarters. 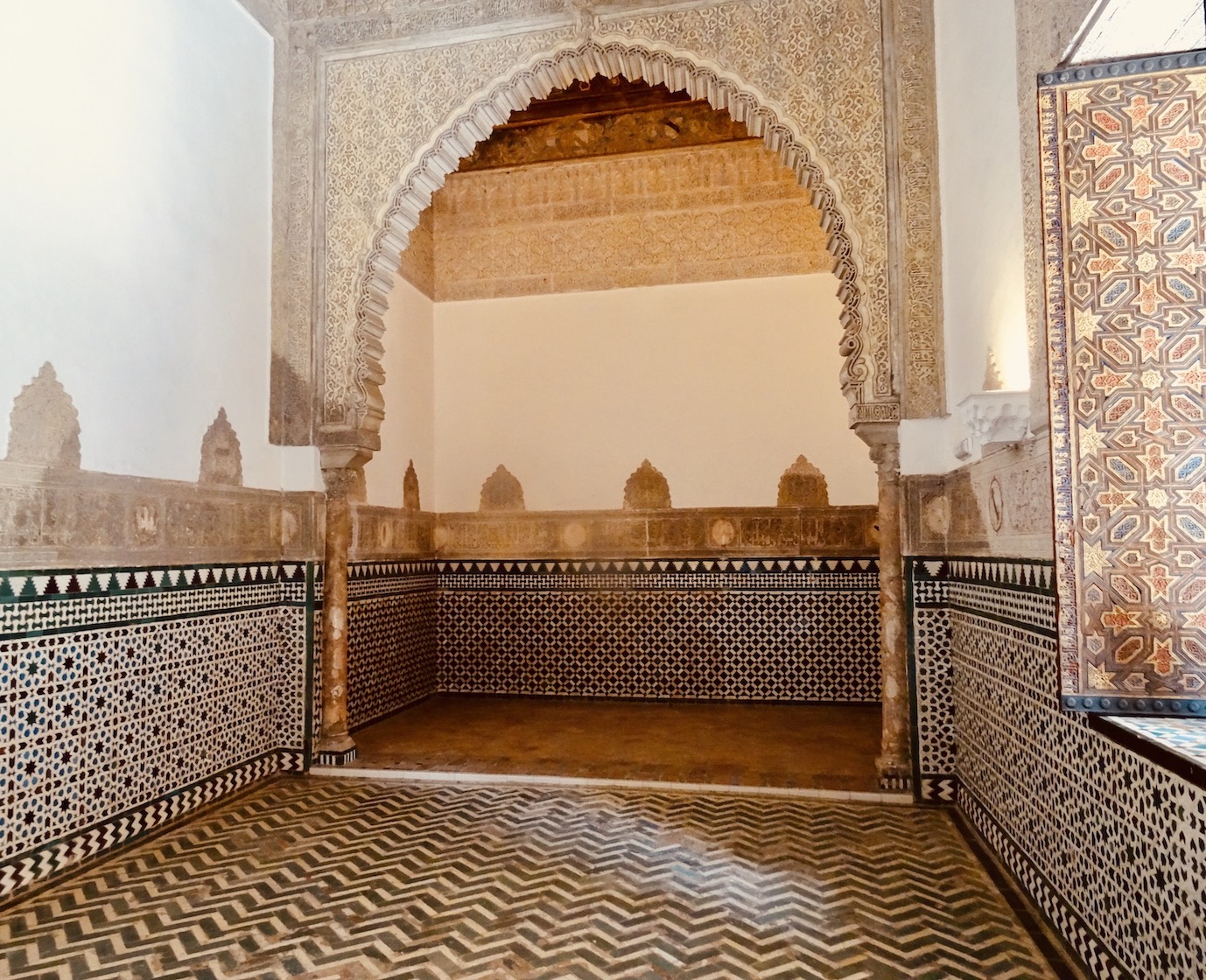 The Alcázar’s most picturesque courtyard is Patio de las Doncellas, Courtyard of the Maidens. Its name refers to the legend that Moorish rulers demanded a hundred virgins every year as a tribute from the Christian kingdoms. As the story goes, these women resided in the chambers that line both sides of the courtyard.

The Courtyard of the Maidens. 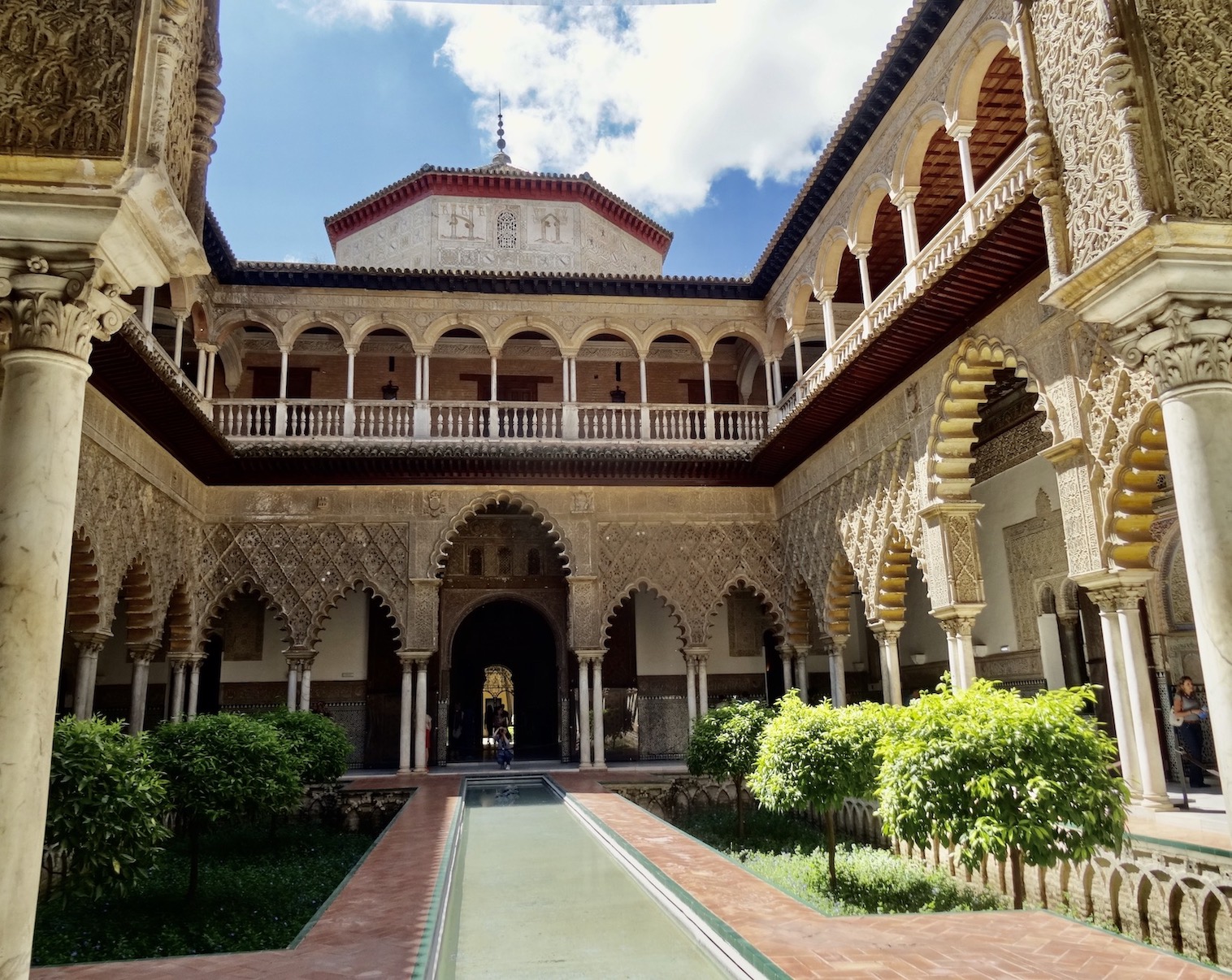 Its upper floor was an addition by Charles V in the mid 1500s. He hired  the royal architect Luis de Vega to build it in the Italian Renaissance style. Movie fans might well think the courtyard looks strangely familiar. That’s because it doubled up as the court of The King of Jerusalem in Ridley Scott’s Kingdom of Heaven. 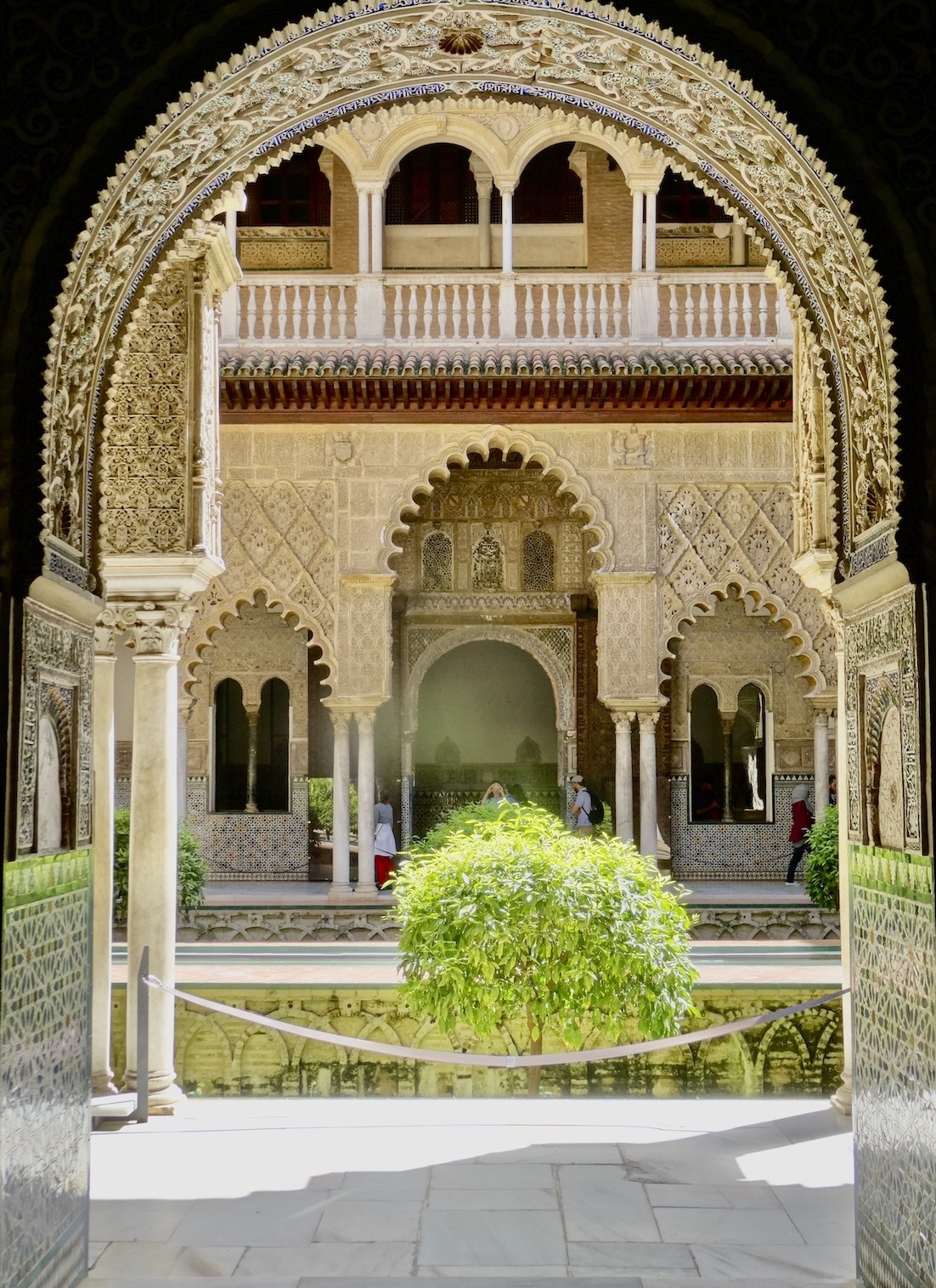 The Courtyard of The Maidens, seen through a side chamber.

The absolutely stunning Hall of the Ambassadors was once the palace’s main throne room. It features triple horseshoe arches, gilded wood, star patterns and Arabic inscriptions quoting The Koran. King Pedro I used the hall to hold official receptions and meetings of his inner circle. 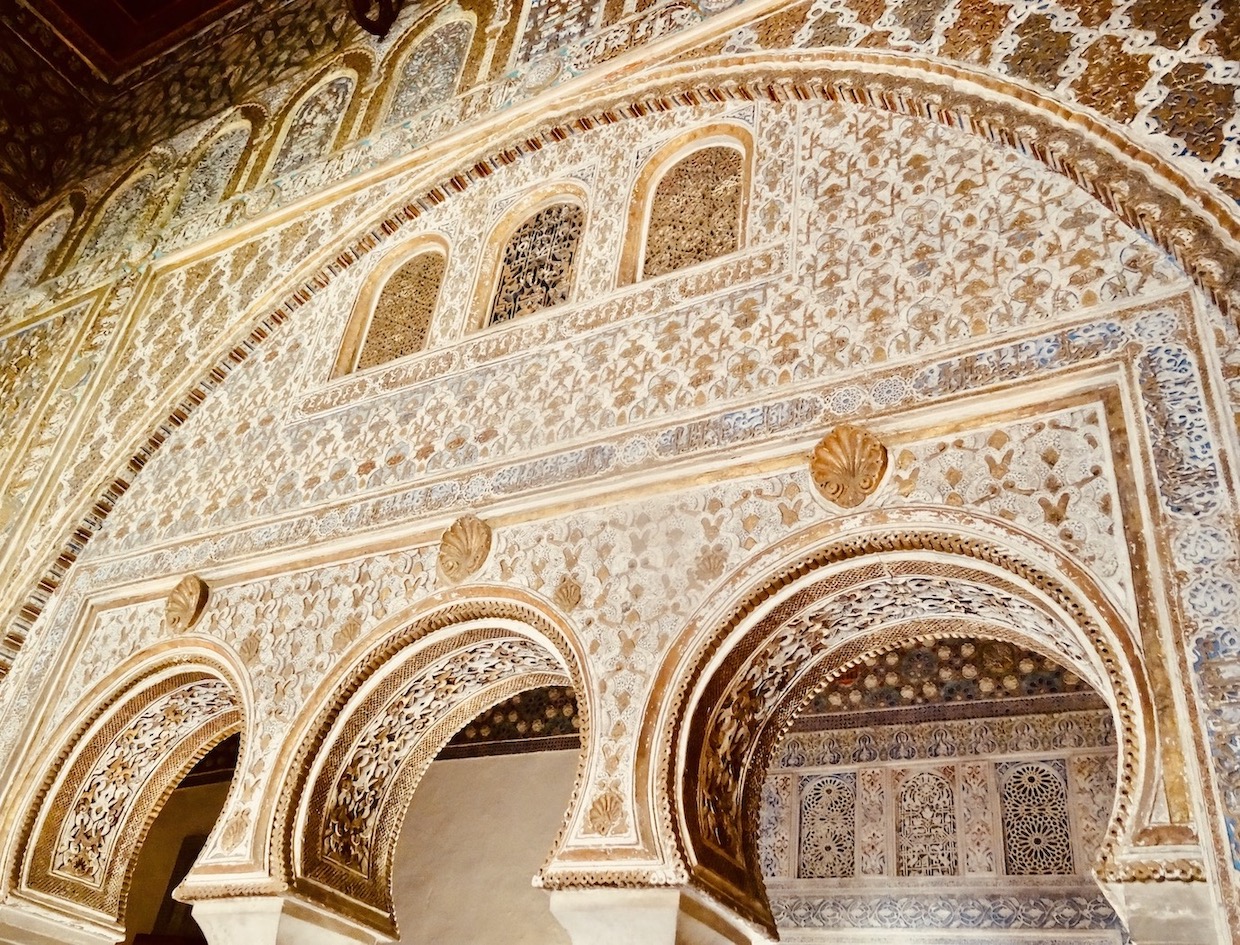 Hall of the Ambassadors.

In fact, some say his eventual nickname, Pedro The Cruel, mostly likely came from within these walls. According to historians, he lived in a perpetual state of plotting. Either planning attacks against his enemies or arranging for a host of people to be murdered for minor and indeed often imagined crimes. 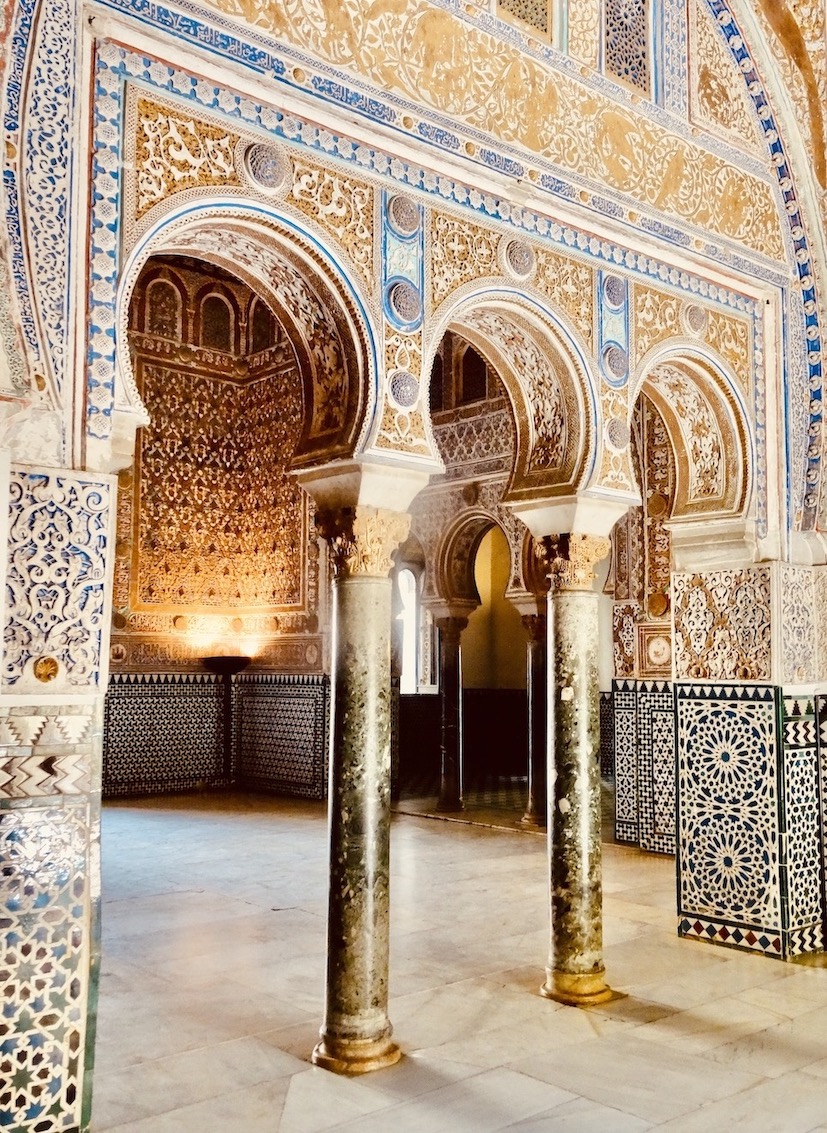 Equally stunning is the neighbouring Felipe II Ceiling Room, with its so-called peacock arches. The small but sublime chamber connects the Hall of the Ambassadors on one side, an entrance to the palace gardens on the other. 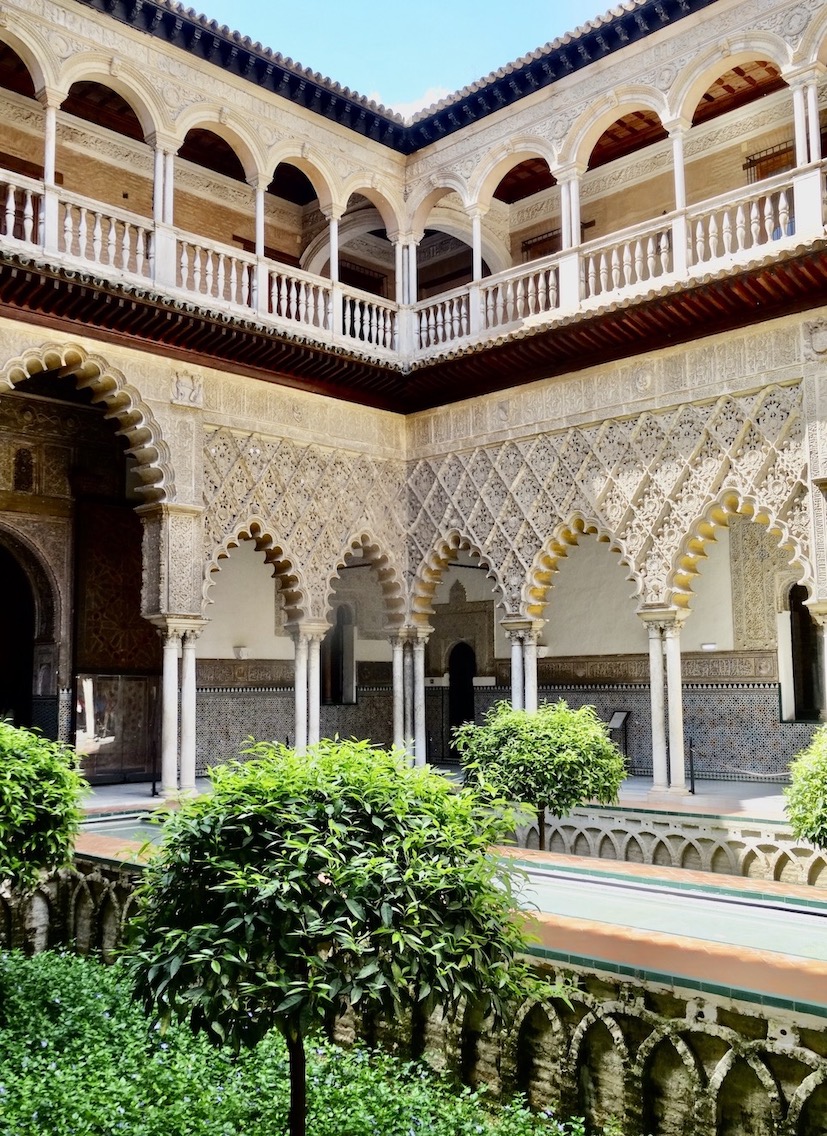 Visitors can take a rare opportunity to sit down in The Admiral’s Room (Sala del Almirante). Queen Isabella I of Castile hosted Christoper Columbus in the hall, following his second voyage to The New World in 1496. The hall went on to become part of the Casa de Contratación, a house of trade with The Indies in the sixteenth and seventeenth centuries. 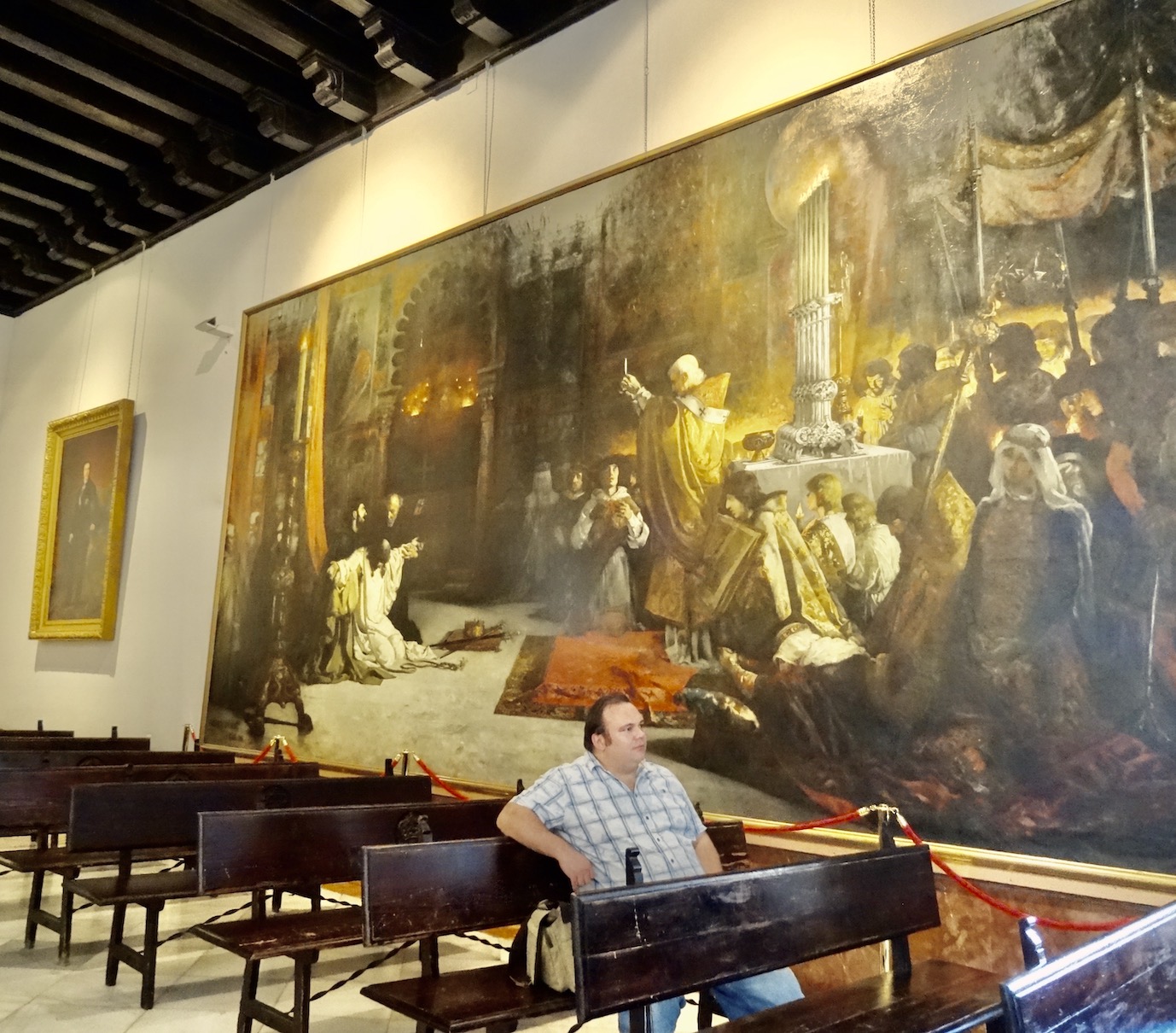 Furthermore, this is where Amerigo Vespucci, Fernando Magellan and Juan Sebastián Elcano planned the first voyage around the world. And where Juan de la Cosa produced the first global map. A series of massive classical paintings only heightens the palpable sense of history. 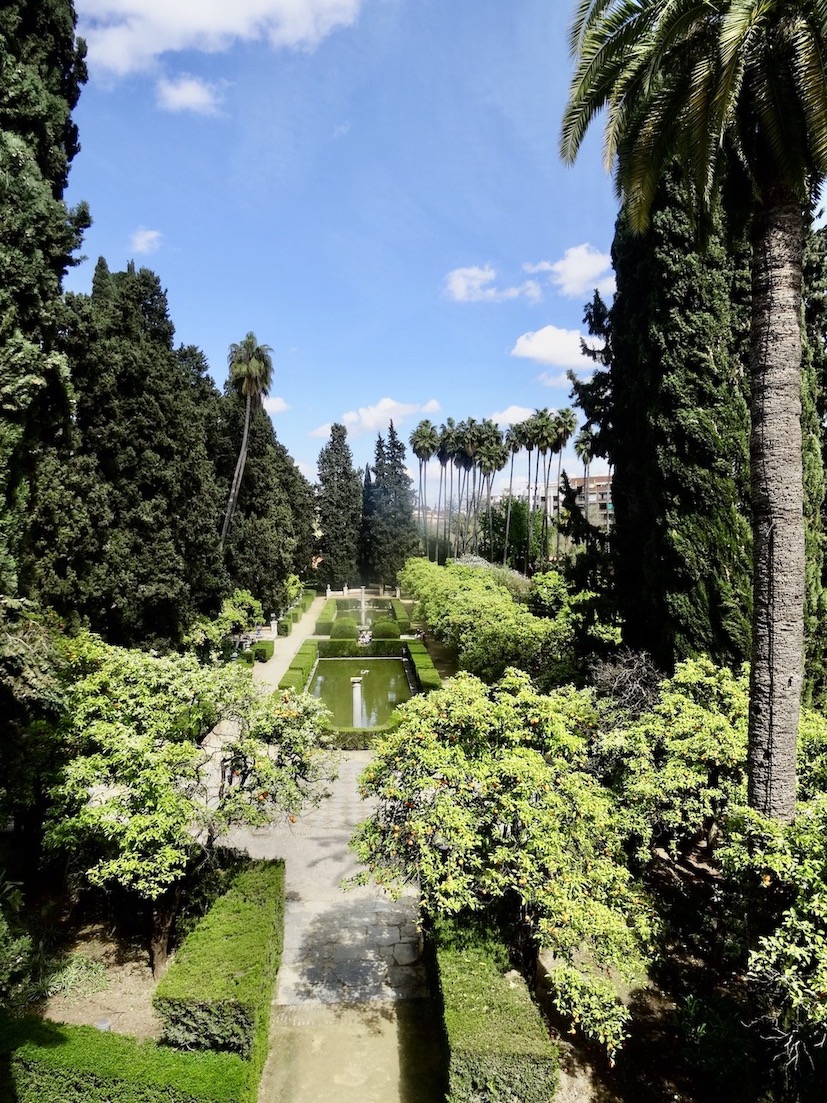 The Palace Gardens are every bit as sumptuous as the interior. Up until the sixteenth century they were somewhat wild and unloved, mostly untouched from their Islamic days. But when Charles V married Queen Isabella of Portugal in 1526, the royal house decided it was time to transform the gardens into something the new Christian dynasty could call their own. 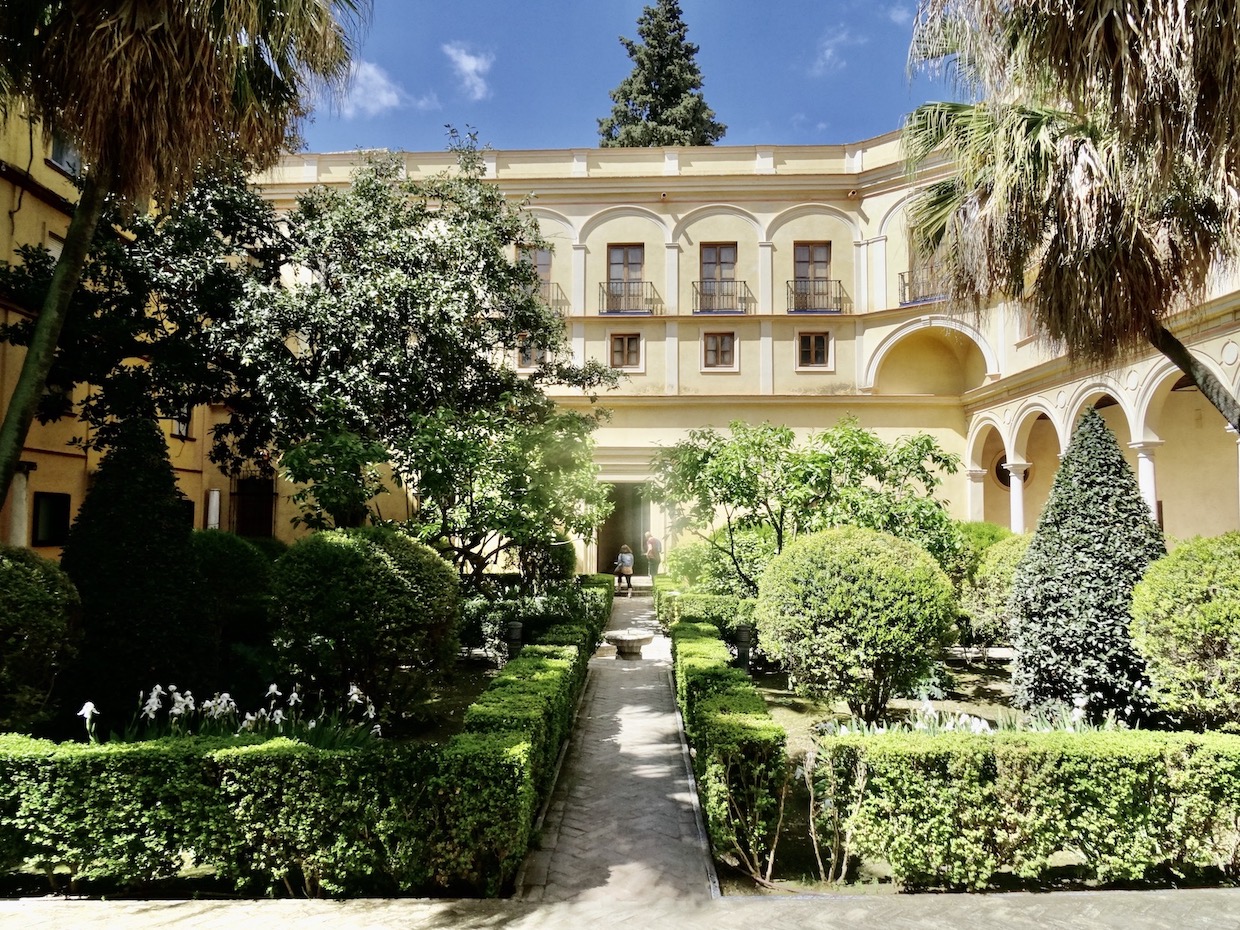 The first project was The Prince Garden, named so due to the fact that Prince Juan, son of Isabella and Fernando, was born in a nearby room. There’s a wide variety of lush vegetation packed in, including magnolia and Chinese palm trees. 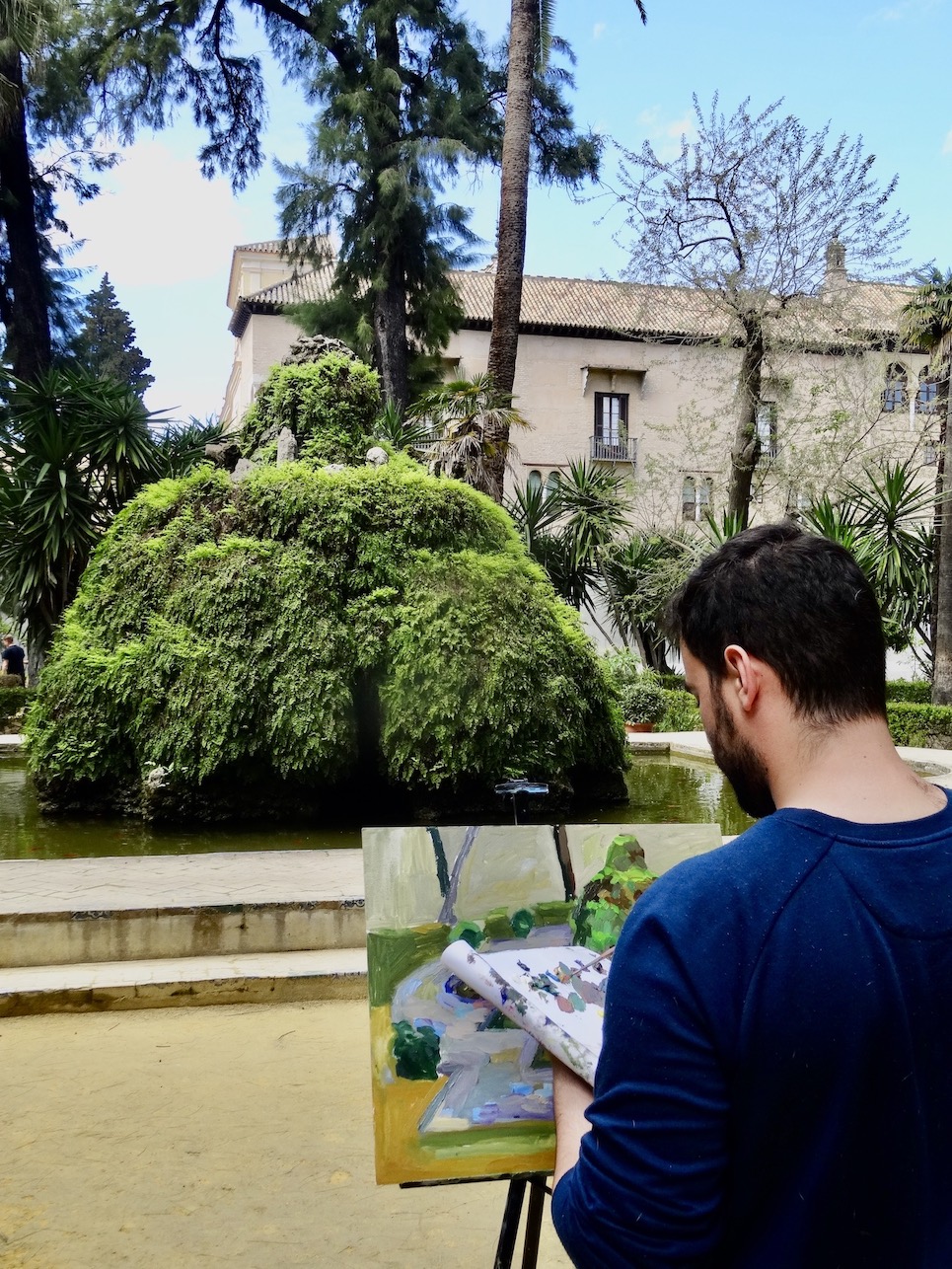 In recent years, the palace has seen a sharp increase of admirers after the gardens appeared in the popular TV series Game of Thrones. Fans of the show may recognise The Alcázar’s lawns, ponds and fountains as The Water Gardens of Dorne in four episodes of seasons five and six. 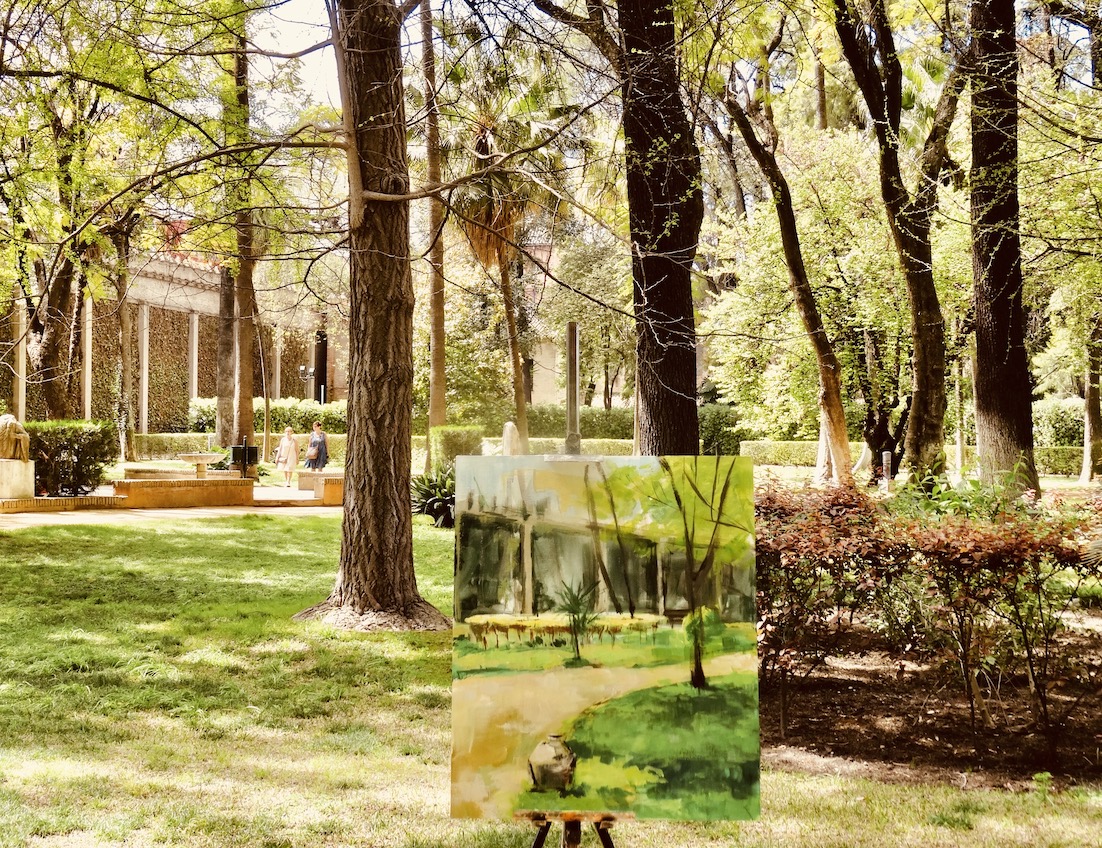 On the day of my visit there were artists everywhere, sketching under trees and hunched up behind easels. Many of them stood before the incredible, elevated viewing gallery, Galeria de Grutesco. 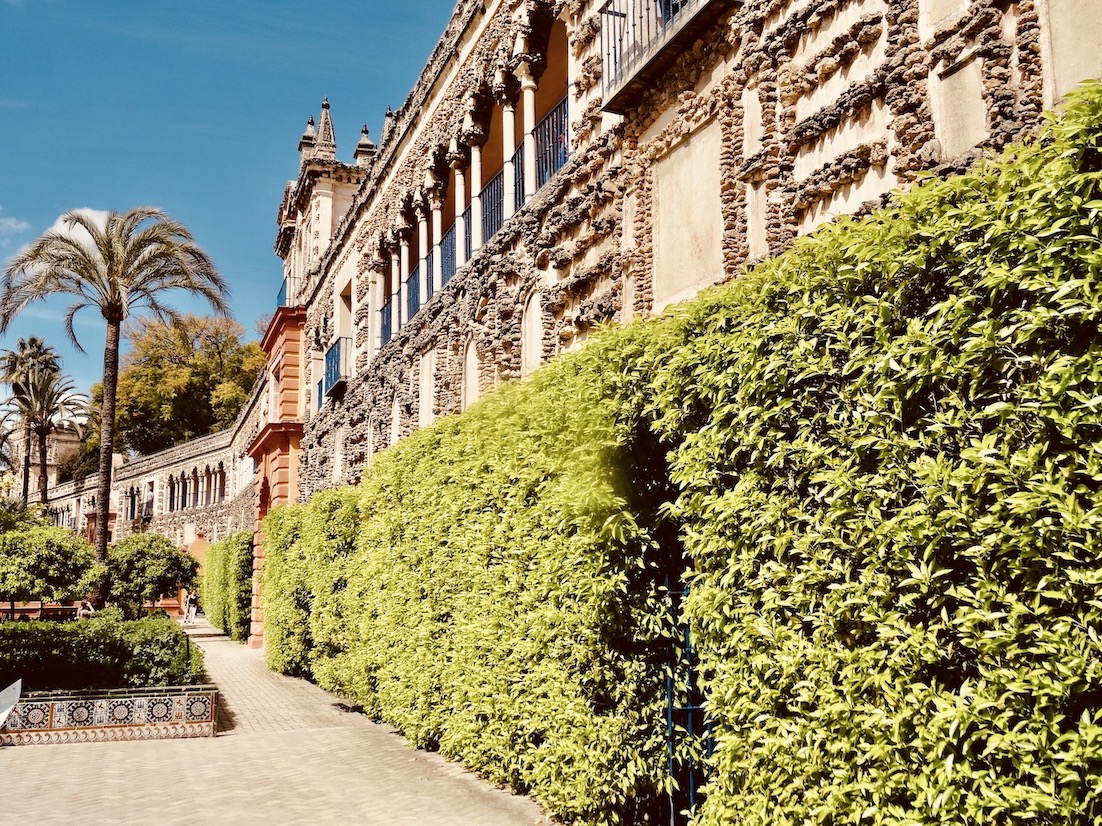 The Gallery of the Grutesco.

Transformed by the Italian architect Vermondo Resta in the late 16th century from the ruins of an old Almohad wall, the gallery offers sweeping views over the gardens and palace. Thus we wandered through, gazing out between the various columns and taking a few shots. Makes you feel a bit like royalty yourself. 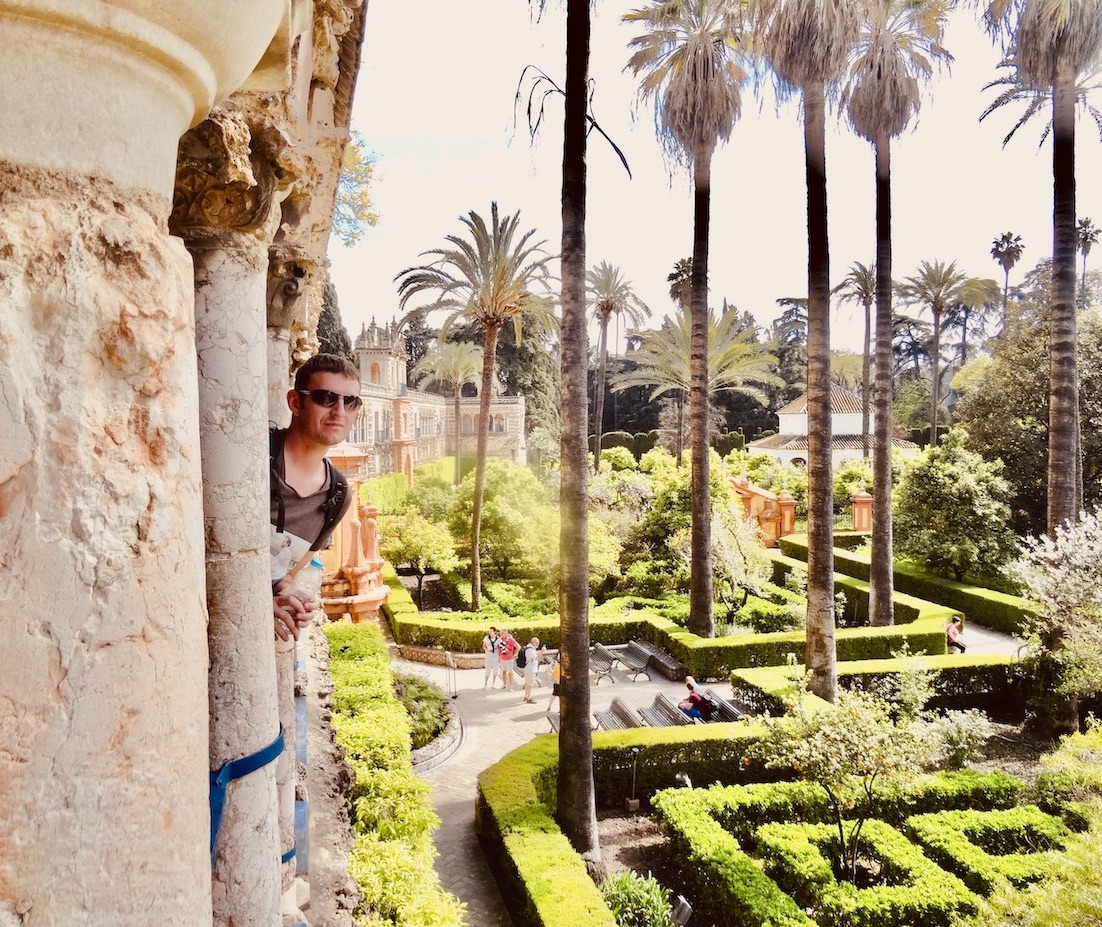 The gallery’s centrepiece is Mercury Pond, a former palace swimming pool. From the outside, one can see painted mythological creatures on its facade. In 1576 the Spanish sculptor Diego de Pesquera added a bronze statue of Mercury wearing his winged helmet. 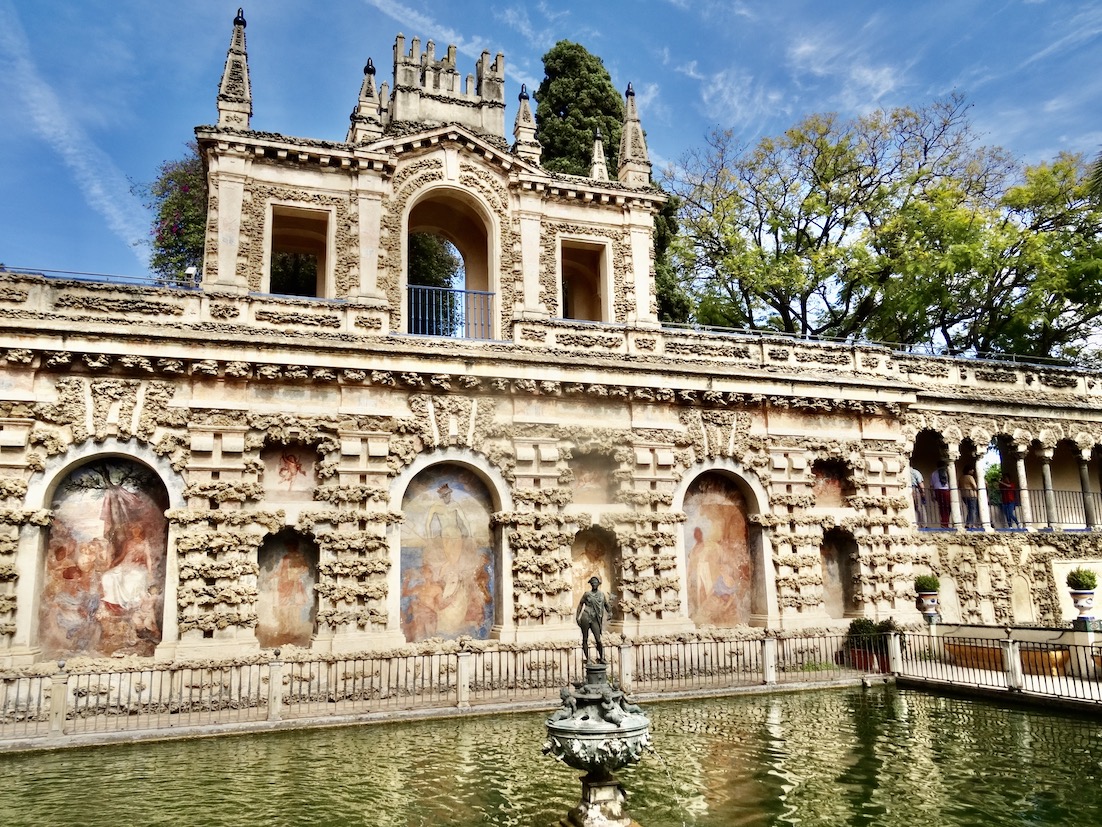 Finally, it was time for my travel buddy and I to head for lunch. We had our hearts set on a Mexican feast at Iguanas Rantas Cantina. So we bid the palace a farewell glance and made for the exit, stopping just briefly to say hello, and then goodbye, to the palace peacocks. 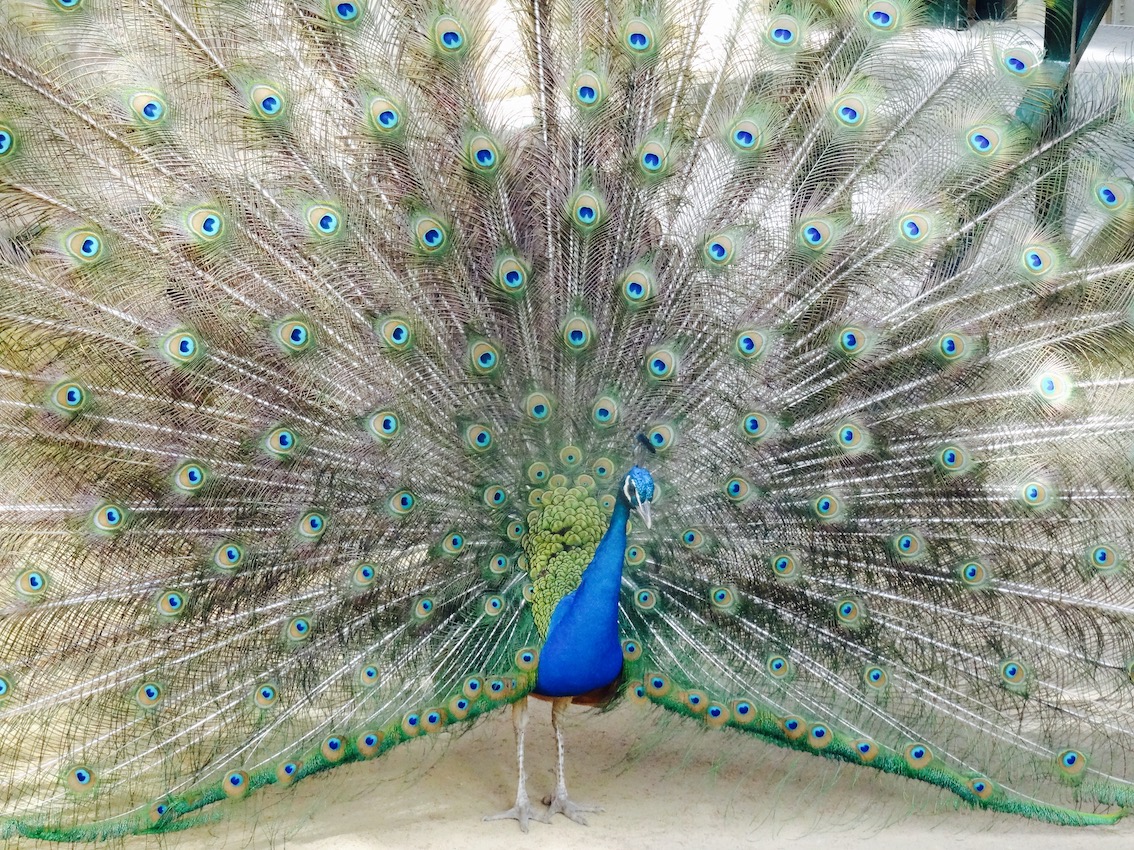 For more on this incredible city, have a read through my other articles from Seville.

Wanna read more about the region? Check out more pieces from around Andalusia.

Why not also take a look at many more of my pieces from across Spain.