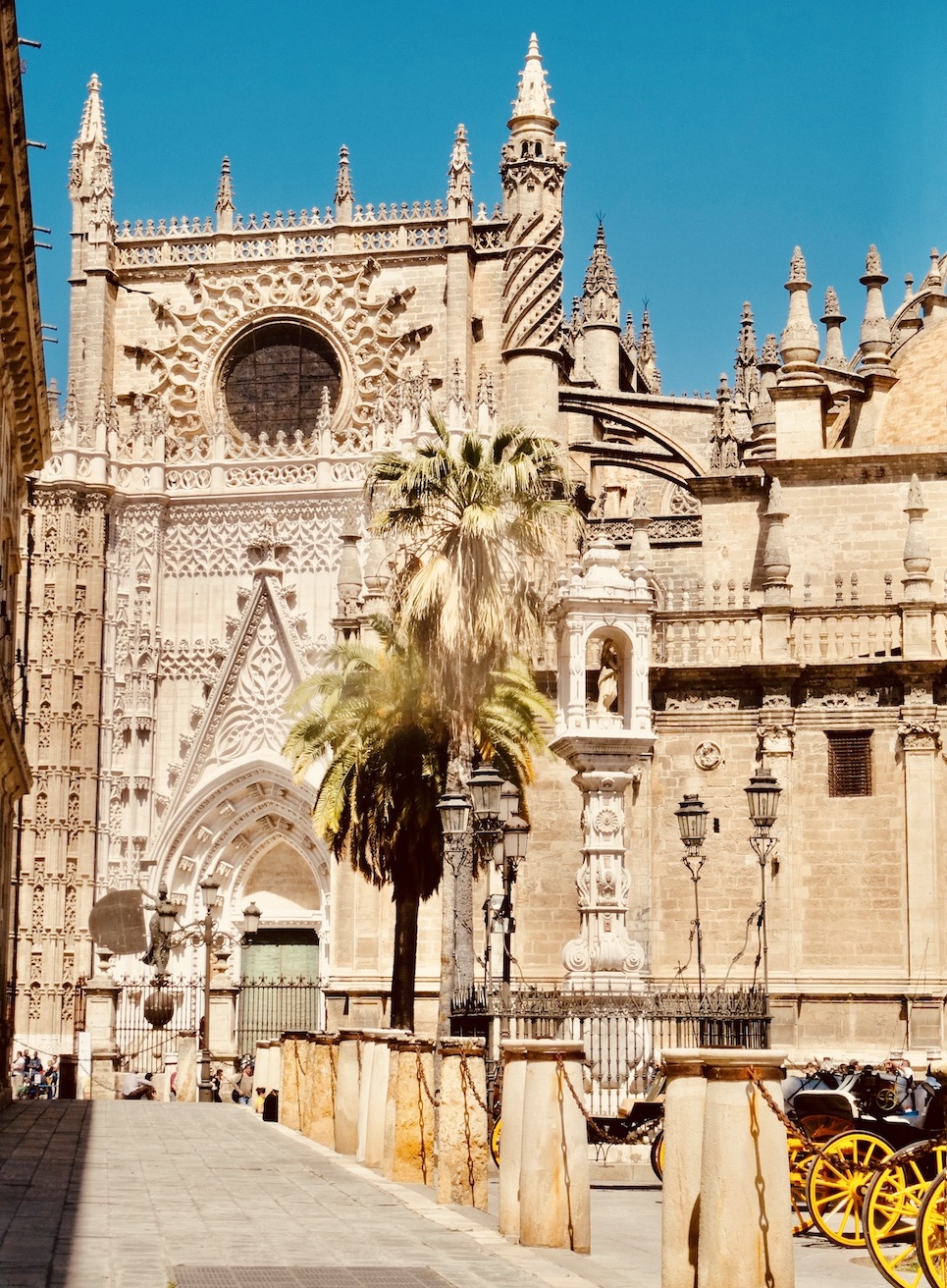 April 2017. “Seen one cathedral, seen ’em all!” an American tourist declared in the queue outside Seville Cathedral. Respectfully, I had to disagree. As did, I’m guessing, most people in the long line snaking around the cathedral’s gigantic exterior. While I will never be anything remotely approaching religious, I’ve always treasured my visits to the world’s chapels, churches, basilicas and cathedrals.

Moreover, I have rarely felt that they’re all a bit samey. In fact, there’s nearly always a fascinating and unique historical backstory at play. Which invariably informs the look and feel of the place in its own special way. I like visiting churches because of the quiet, and the weighty sense of history. A palpable atmosphere of lives lived, victories enjoyed, mistakes made and the irreversible march of the future. 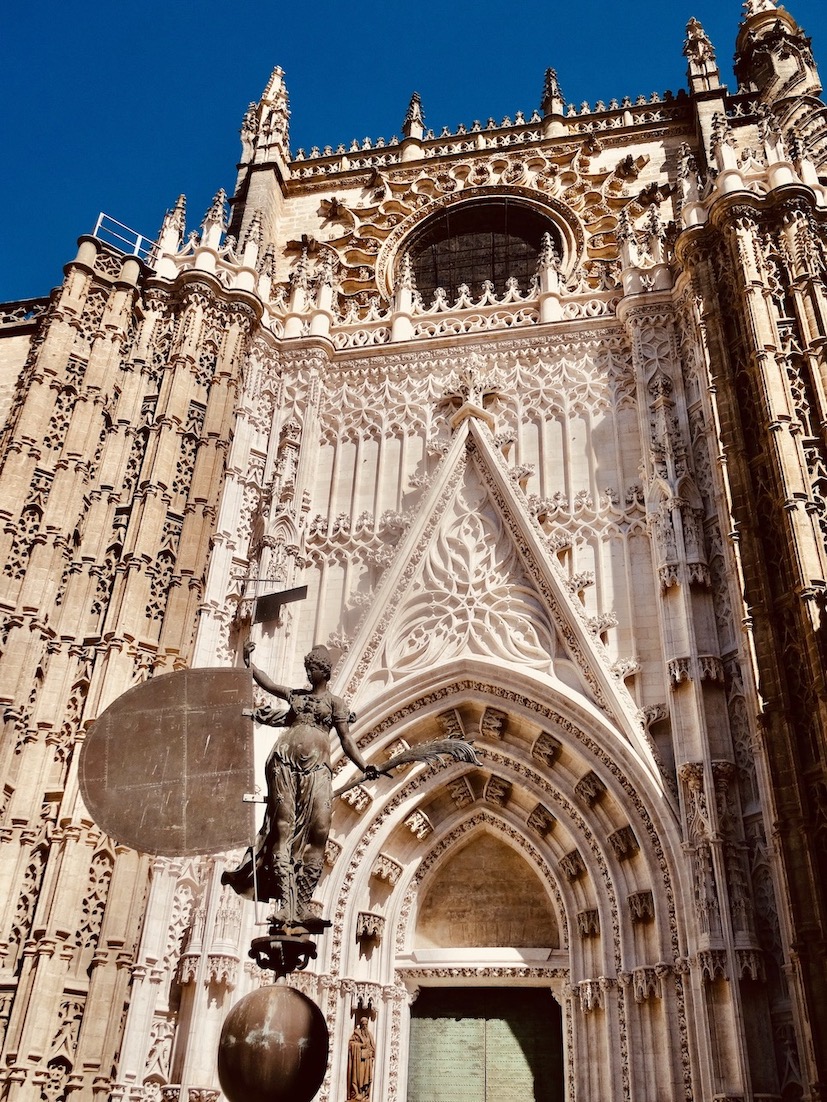 In Andalusia I’d been particularly spoilt for choice with stunning churches. Nevertheless, Seville Cathedral seemed determined to compete with, if not outdo, the very best of them. In what is a very familiar story throughout the region, the first building here was actually a mosque built by The Moors towards the end of the 12th century.

By the mid 13th century Spain’s Catholic kings had gained control of the region and the mosque became a Christian house of worship. Finally, in 1401, city authorities announced plans to destroy the mosque and build a cathedral in its place. Furthermore, it was clear from the very beginning that this wasn’t going to be just any old church.

“Let us build a church so beautiful and magnificent that those who see it will think we are mad”. 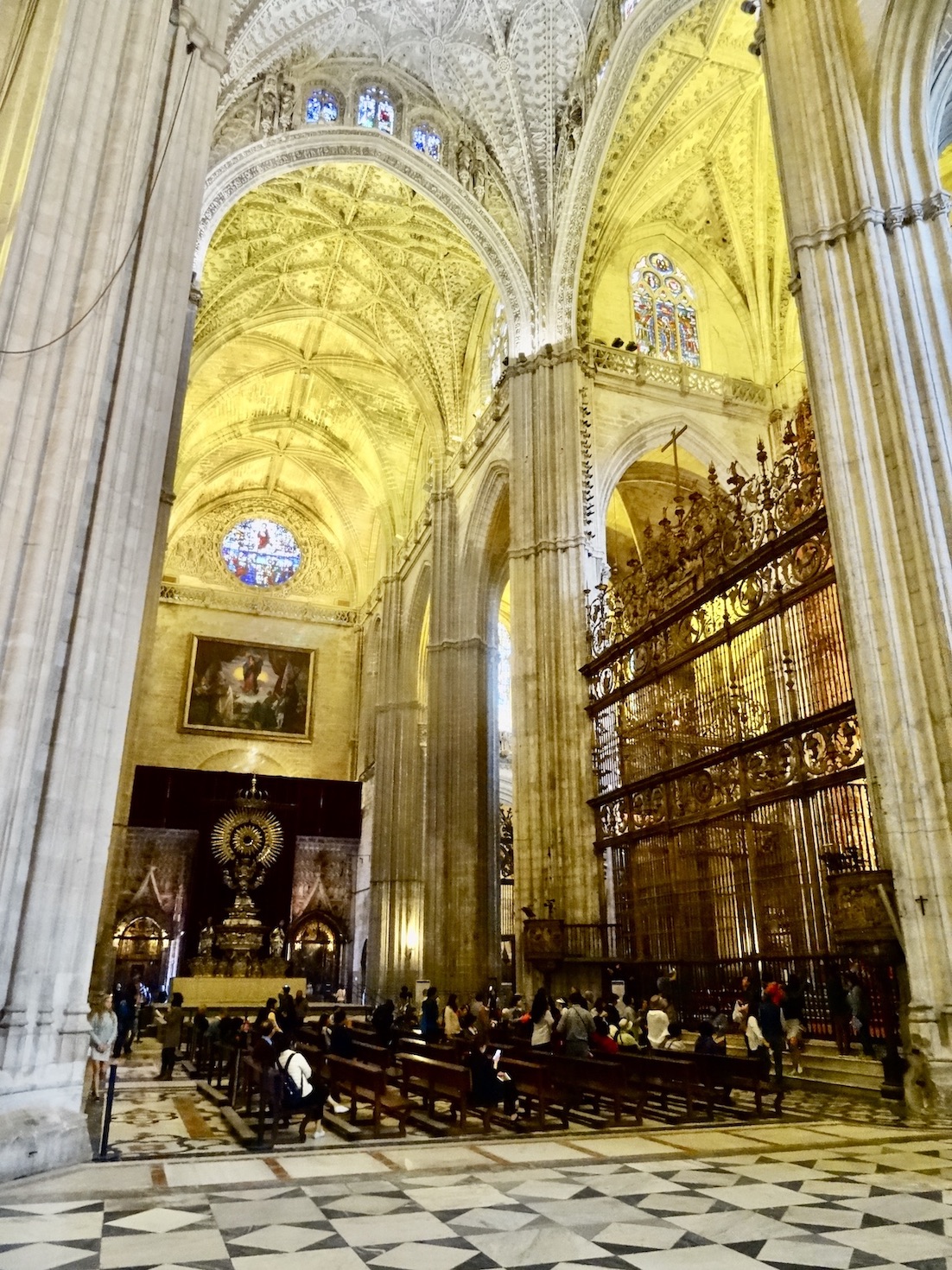 With lofty ambitions, construction began that same year and didn’t finish until 1528! Those city councillors and church elders certainly weren’t kidding when they said they wanted to build a church like no other.

One of the world’a biggest cathedrals? Tick! Third biggest church on the planet? Yup. Furthermore, its nave is the longest in Spain at 24 metres, while the main chapel boasts the world’s largest altar. 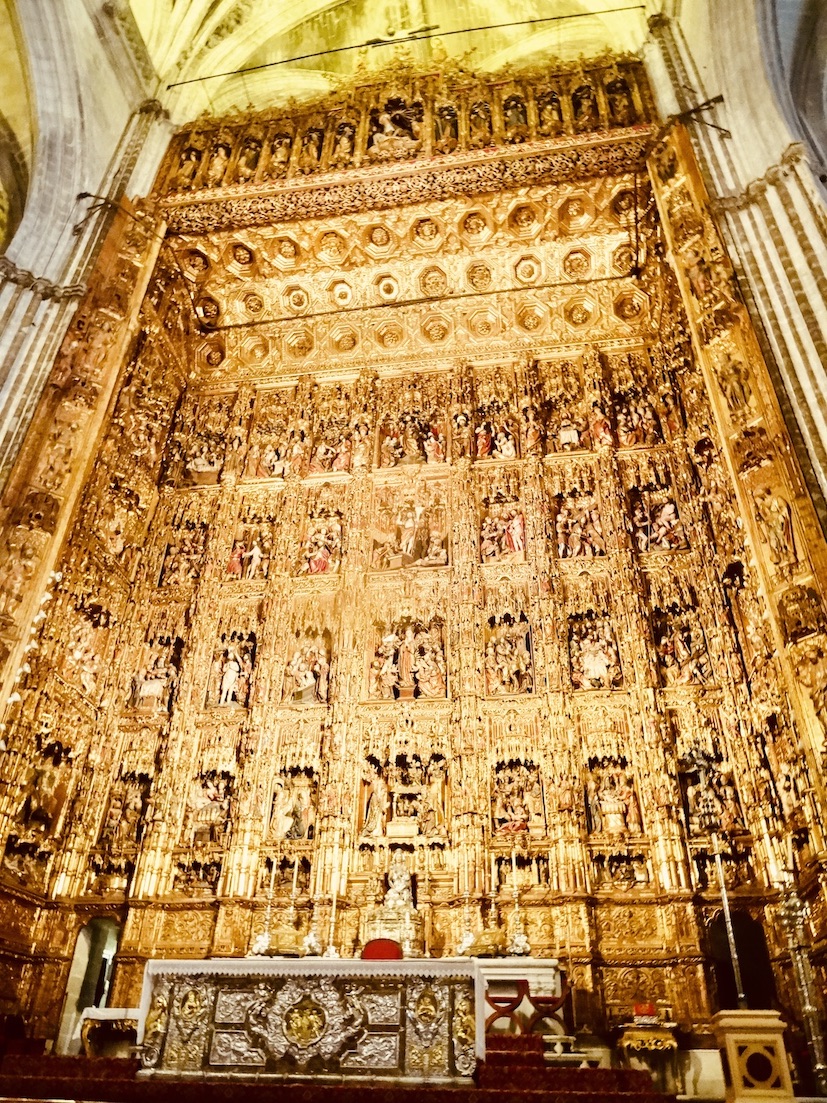 A rather large altar.

Seen one altar seen ’em all? Absolutely not! At twenty metres high, this thing is just colossal and features over forty carved scenes from the life of Jesus Christ. Made from polychrome wood with gold embellishments, the renowned sculptor Pierre Dancart spent over a decade of his life working on it.

After he died, a number of carvers saw the altar through to completion. Today it stands as one of the greatest examples of Gothic woodcarving. 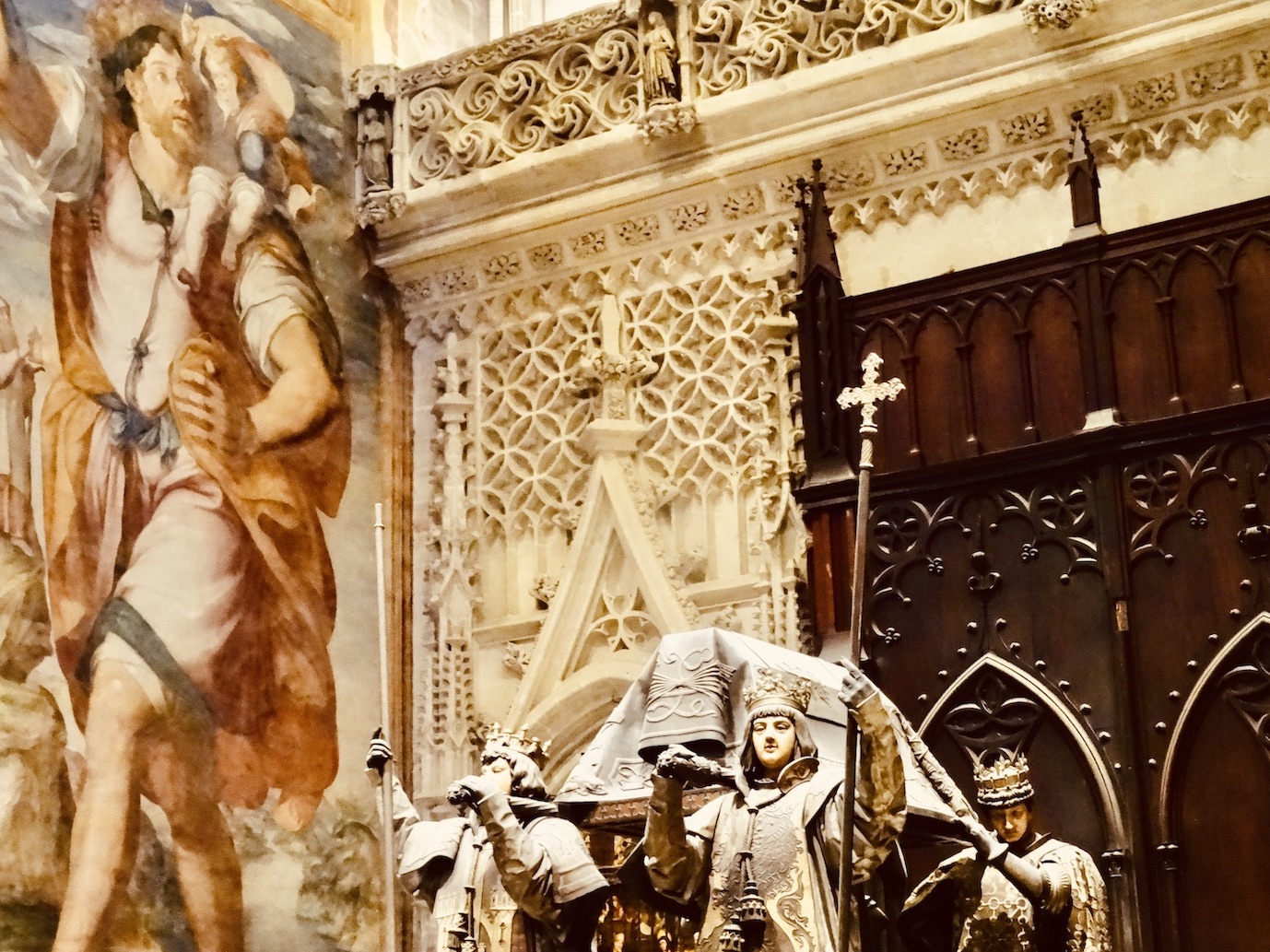 The Tomb of Christopher Columbus.

The seen one seen ‘em all faux pas seems especially erroneous when you come face to face with the monumental tomb of Christopher Columbus. When the great explorer died in 1506, he was originally laid to rest at a convent in Valladolid.

Over the years, his remains have been moved all over the world in what reads as a truly farcical run of events. Firstly, his bones came to a monastery in Seville. Then to a cathedral in what is now The Dominican Republic. 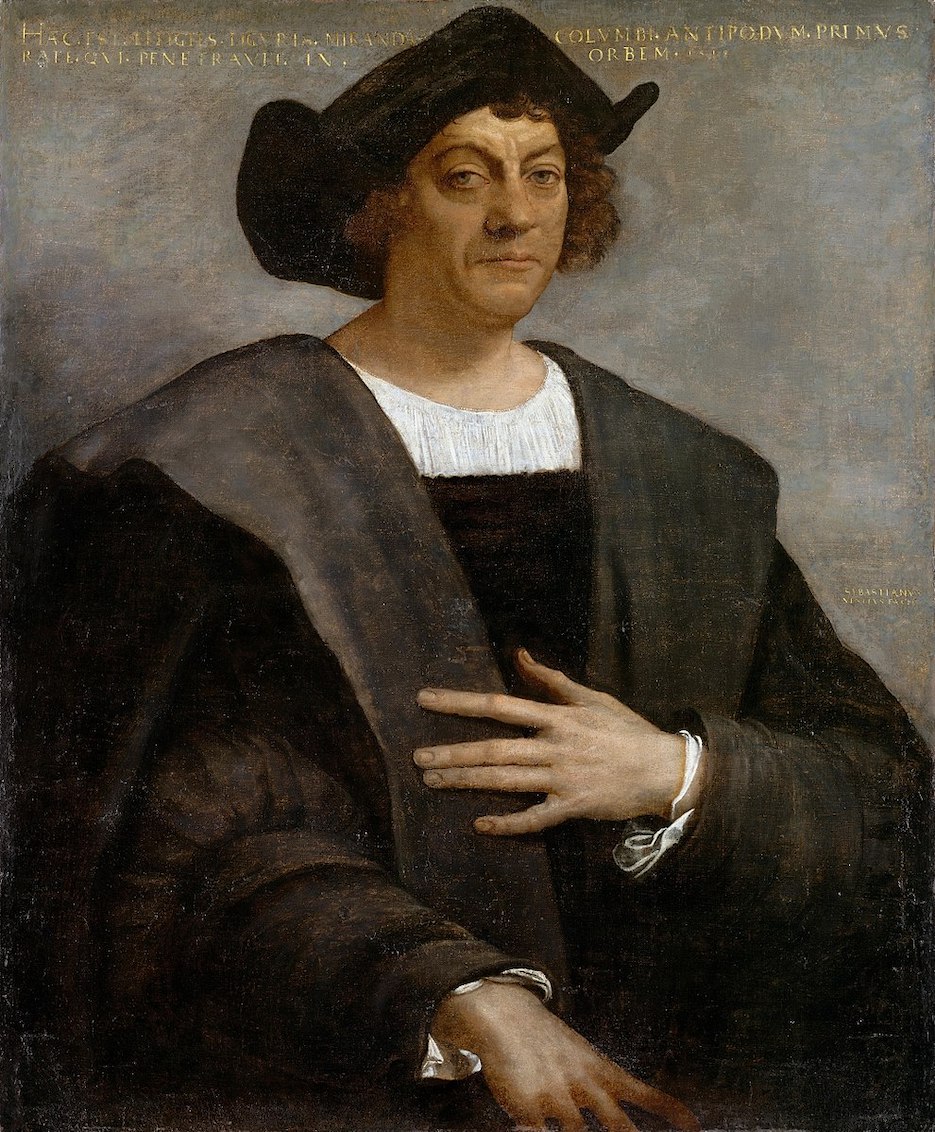 By 1796 he was resting at a church in Havana, a stay that lasted just over a hundred years. Eventually, in 1898, Columbus arrived at his final port of call, Seville Cathedral.

You can find his lavish tomb by the Puerta del Príncipe (Door of the Prince), next to a giant painting of the man. It’s fitting that his final home is the city that benefited so greatly from his discovery of The New World in 1492. 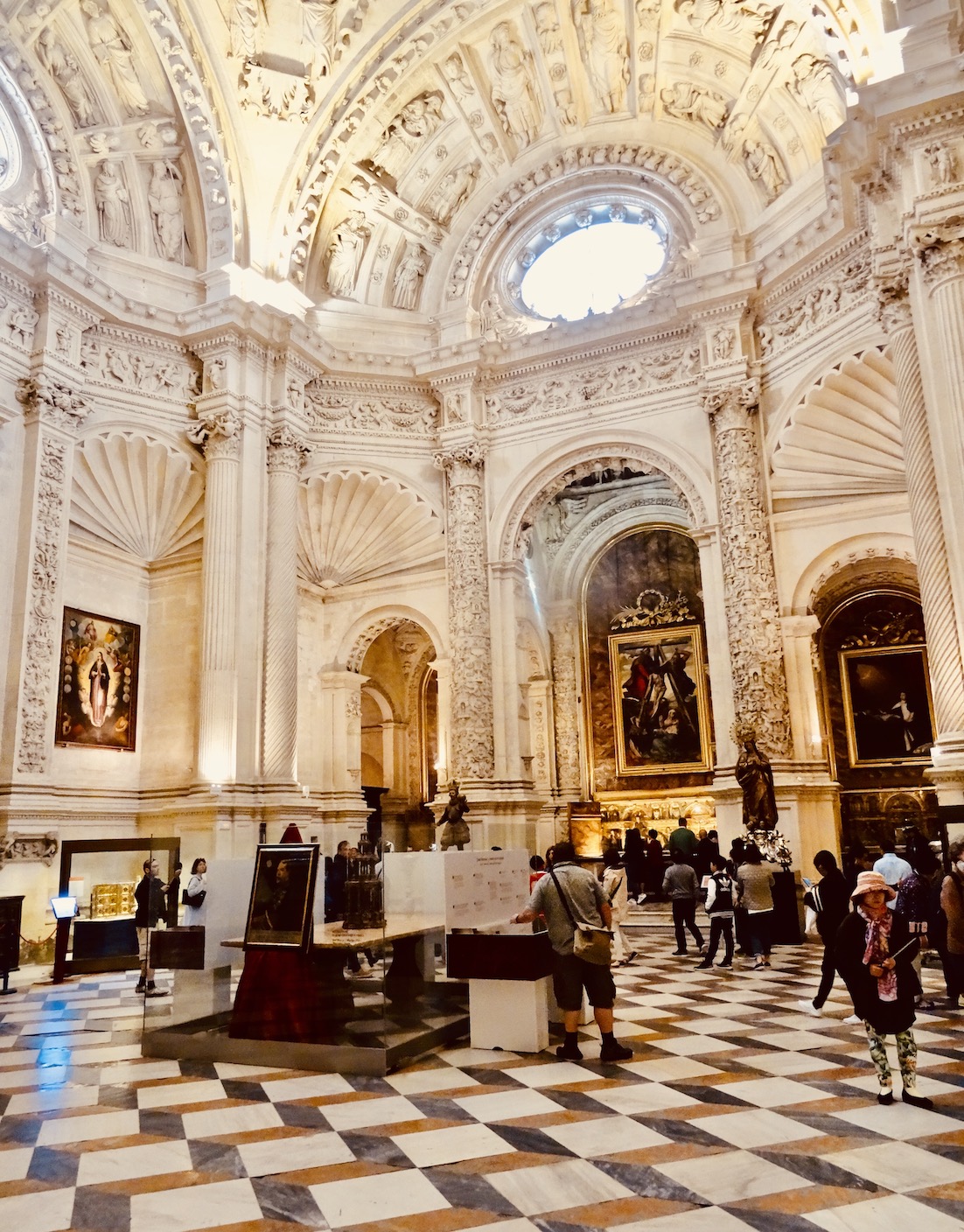 Columbus’ son Diego also lies in the cathedral, along with a number of royals, such as King Fernando III of Castile and Pedro The Cruel.

Meanwhile, in The Greater Sacristy, there’s a staggering collection of 15th century silverware and priceless sculptures. Take San Fernando for example, a 1671 likeness of Fernando III, made by the legendary Baroque sculptor Pedro Roldán. 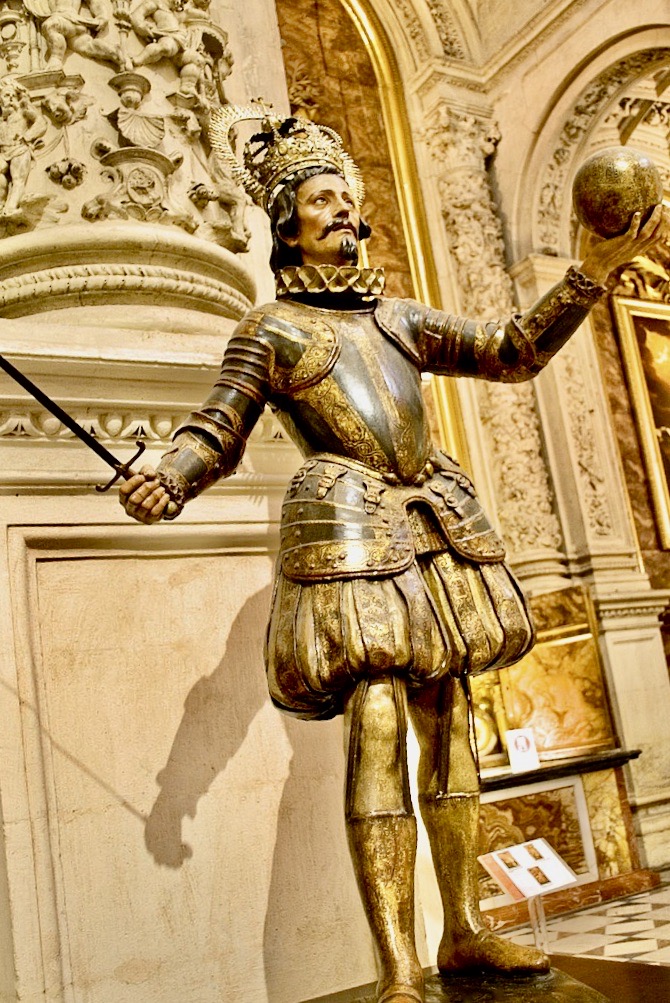 A warren of fascinating corridors and chambers run off the main chapel. In the cathedral’s southeastern corner, I came upon the gorgeous, oval-shaped Chapter House.

Crane your neck skywards and you’ll see a quite magnificent domed ceiling and numerous paintings by Bartolomé Esteban Murillo. Its centrepiece is La Inmaculada Concepción, a depiction of The Virgin Mary up in heaven. 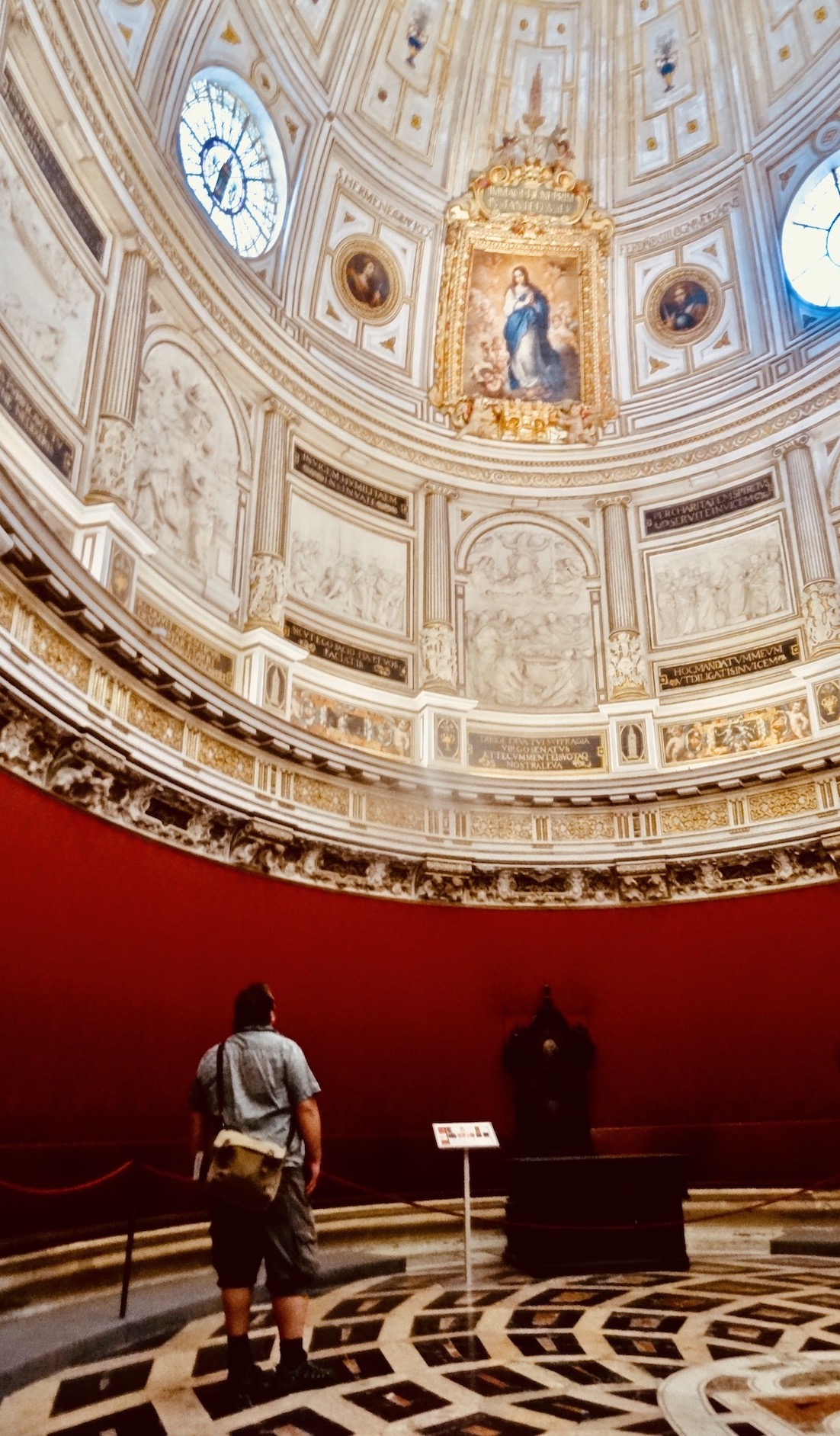 The most understated and indeed quietest section of the cathedral was the Cabildo, a number of city council chambers that included a small college for priests.

Cool, dim and sparsely furnished, these rooms seemed to attract little foot passage. And those that did pass through tended not to linger. 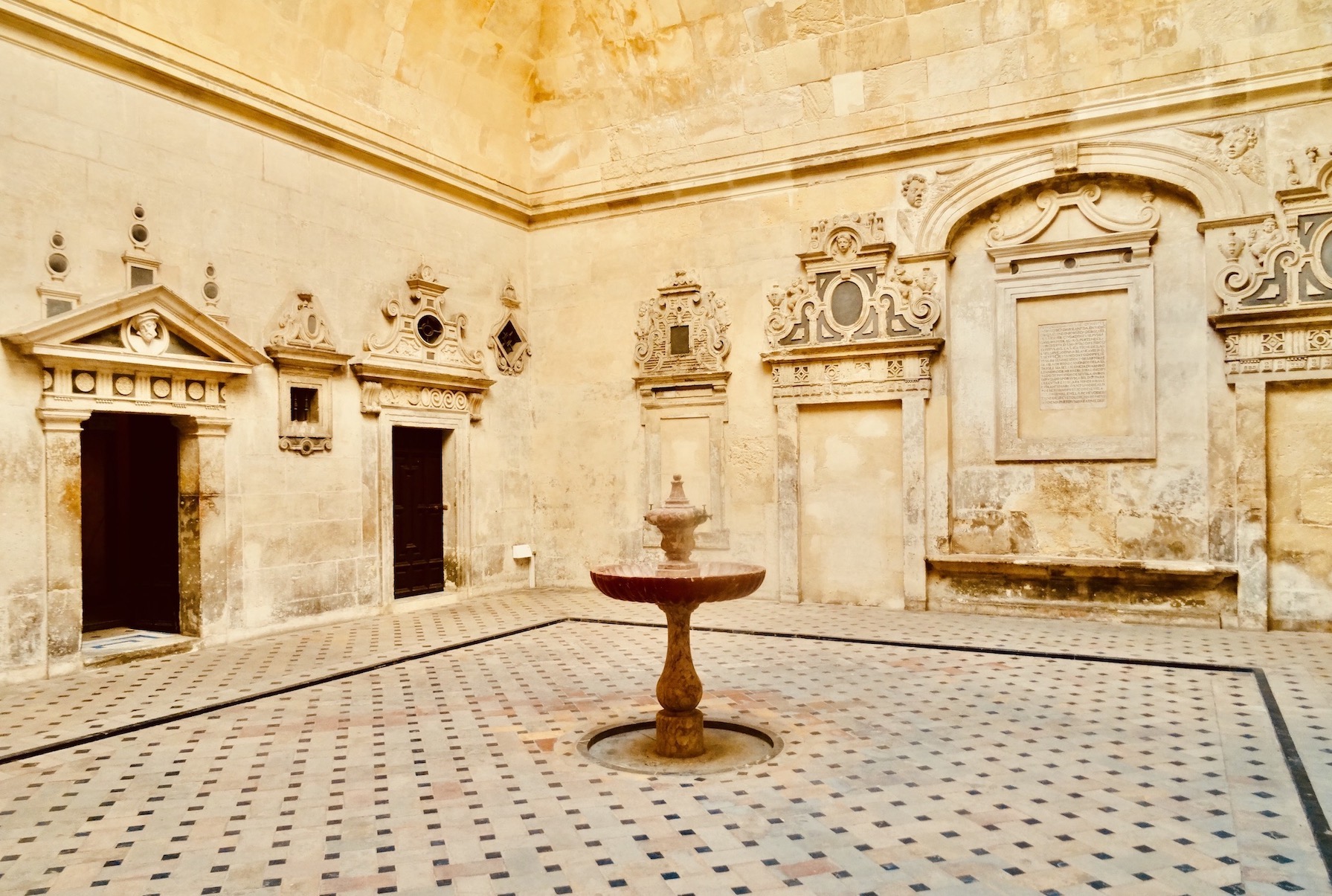 The perfect opportunity, I figured, to rest on a long stone bench running alongside the walls. It was so quiet Wonderboy and I decided to hang for a bit and just breathe it all in. 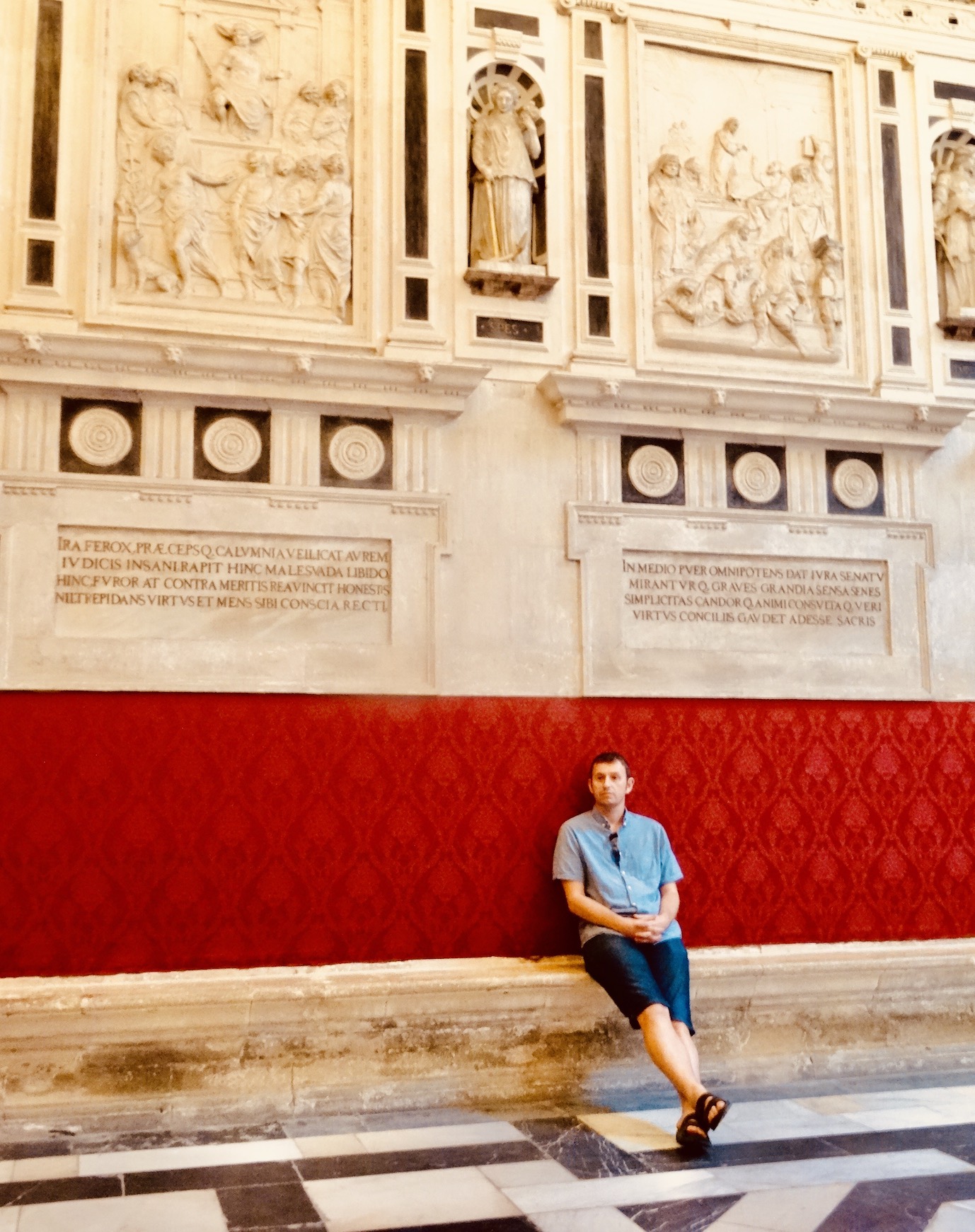 Very little remains of the original mosque that once stood here. But there’s no mistaking the Islamic character of the Bell Tower, La Giralda in Spanish.

This former minaret used to blast out the call to prayer during the days of The Almohad Dynasty. Topped with a Renaissance style chamber, it stands at 104 metres and is one of Seville’s iconic landmarks. 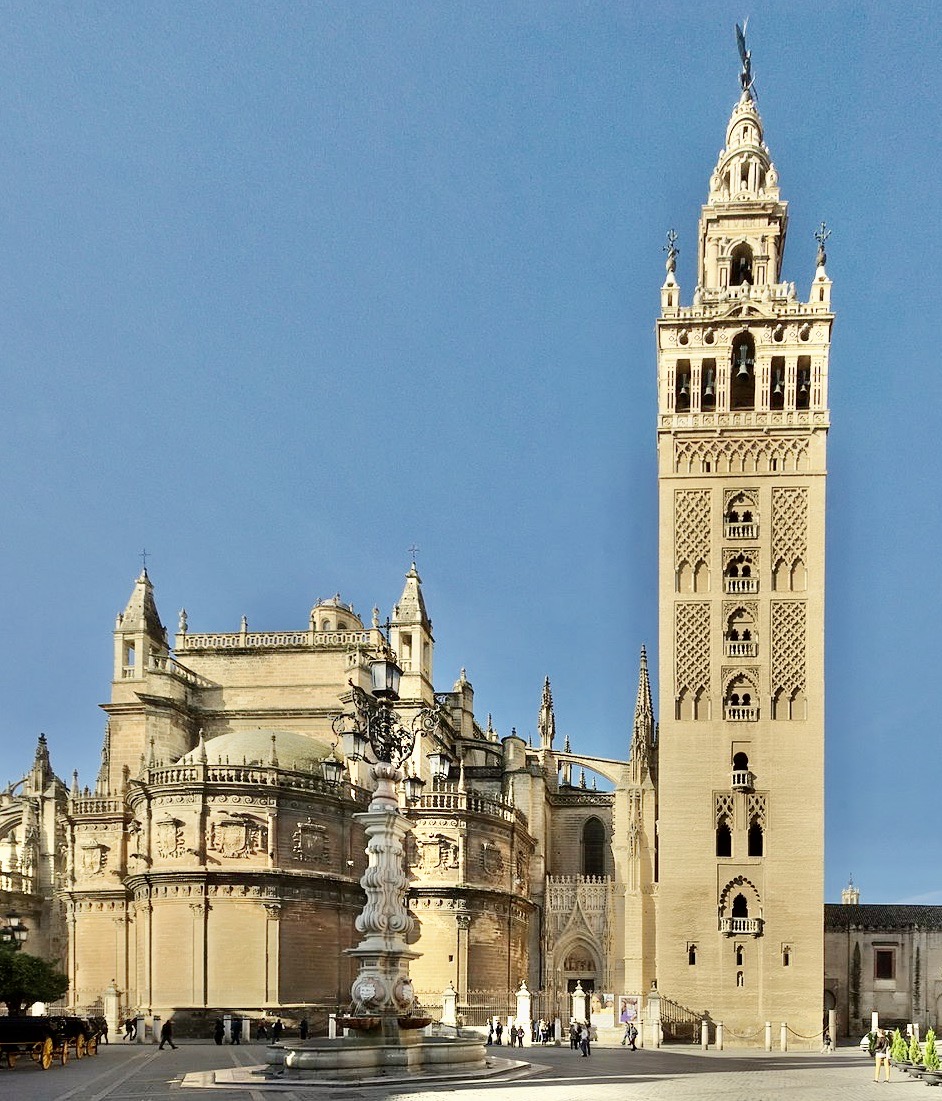 You can climb the tower from the cathedral’s northeastern corner. The passage up isn’t the usual set of stone steps, but rather a series of cobbled ramps. This design enabled royal guards to trot up to the tower on horseback! 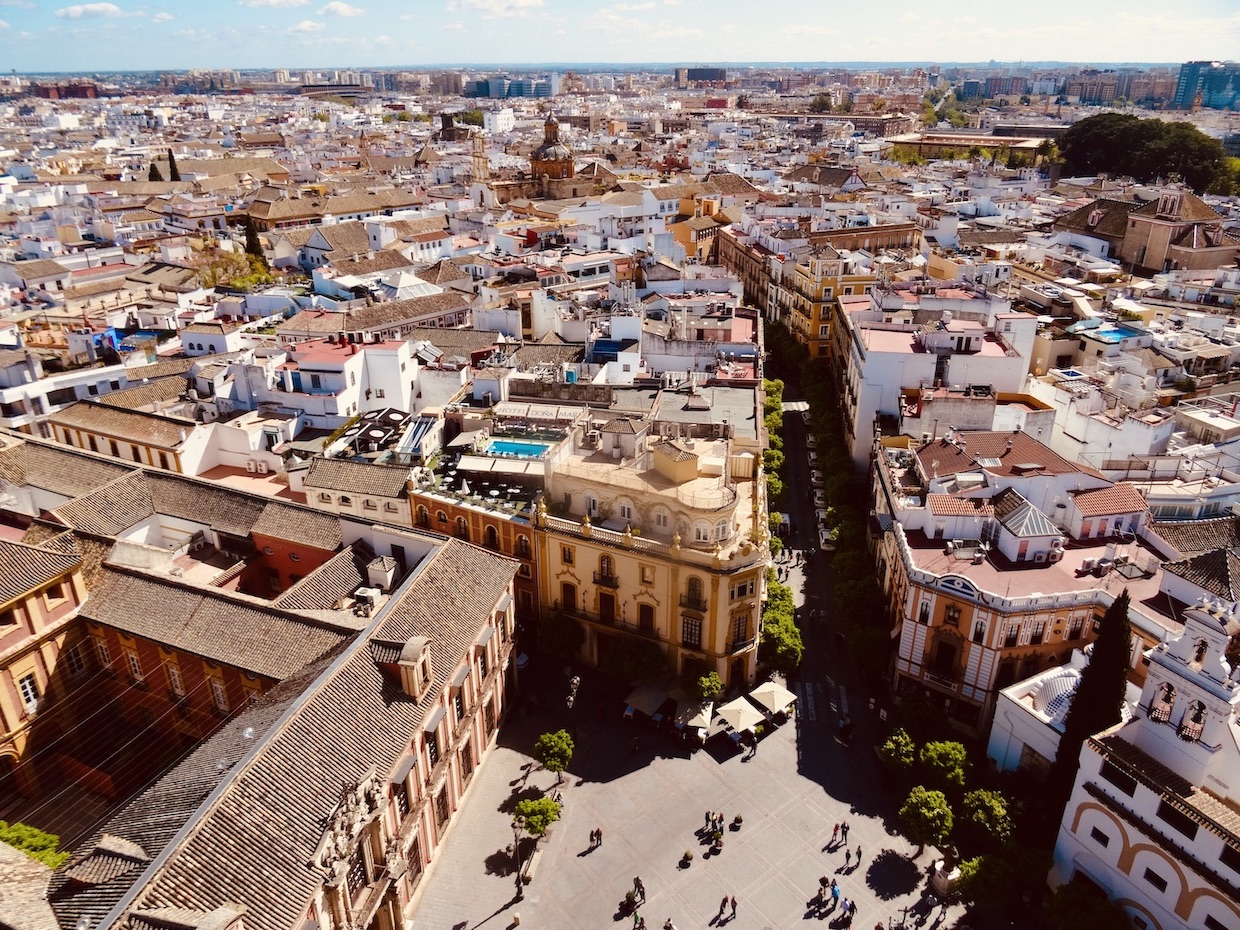 Views over Seville from The Bell Tower.

Naturally, there are wondrous views from the top, a fitting end to our self guided tour. I wonder what the American tourist made of it. Seen one city skyline, seen ’em all? For the latest opening hours and the various tickets on offer, head to the official website to plan your visit.

Like this? Why not check out more of my travel reports pieces from Seville.

Or branch out with my pieces from across Andalusia.