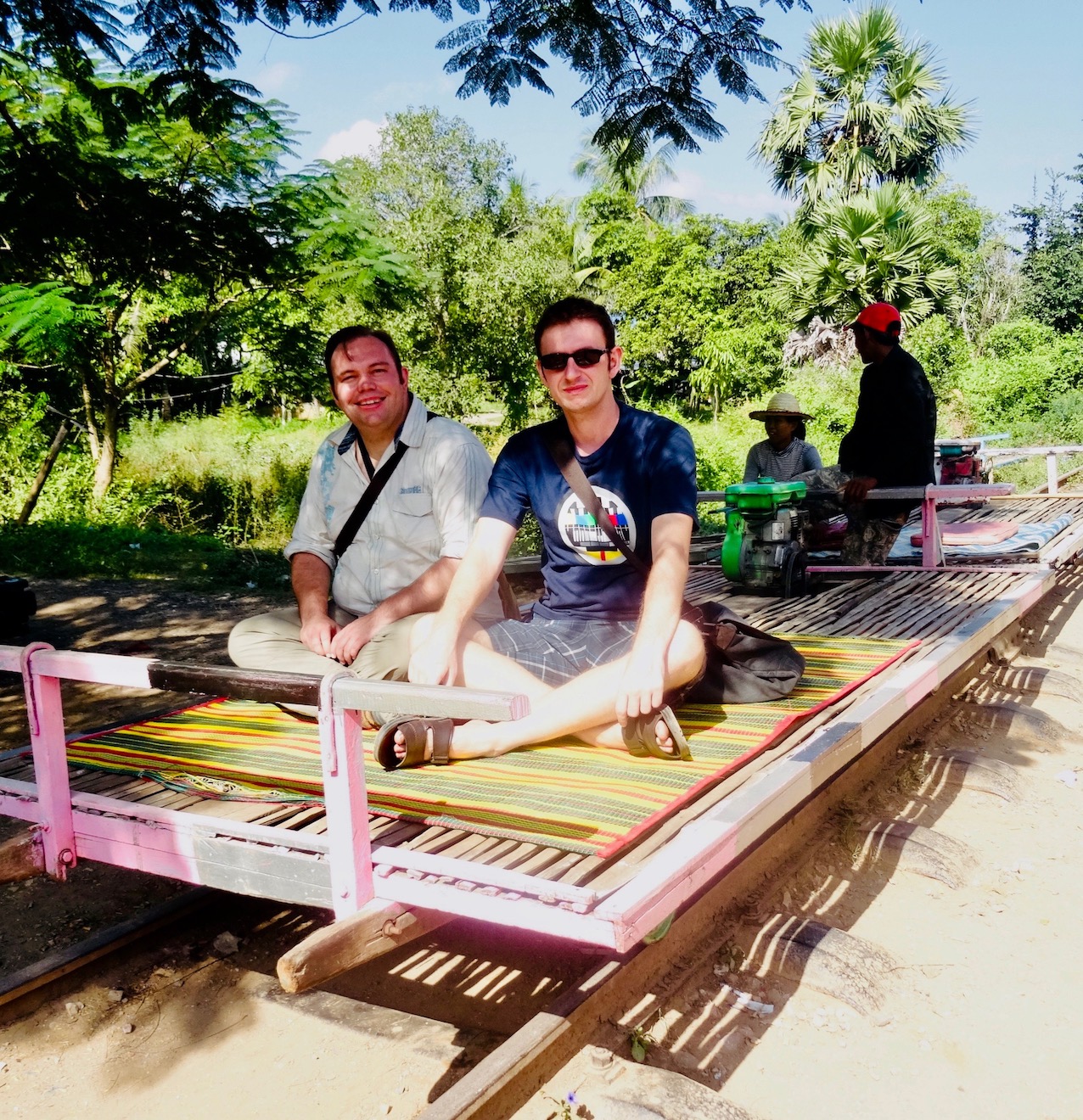 December 2015. I’m so glad I set aside a couple of days for Battambang during my first cross-country adventure in Cambodia. Having thoroughly enjoyed the mind blowing parade of bats at Phnom Sampeau Mountain, it was now time for one of the world’s most unique rail journeys!

Yup, for just $5 of your hard earned cash one can take a ride on the highly singular Battambang Bamboo Train. This bumpy, thrilling twenty minute journey begins from O Dambong Village and rattles to a stop in the tiny settlement of Sra Lav.

The so-called trains are little more than three metre wooden frames powered by a 6HP gasoline engine. Cranking down the single-track line at fifteen kilometres an hour is actually far more exciting than you’d think. Especially as our driver took great delight in making the journey as twisty and crunching as possible. 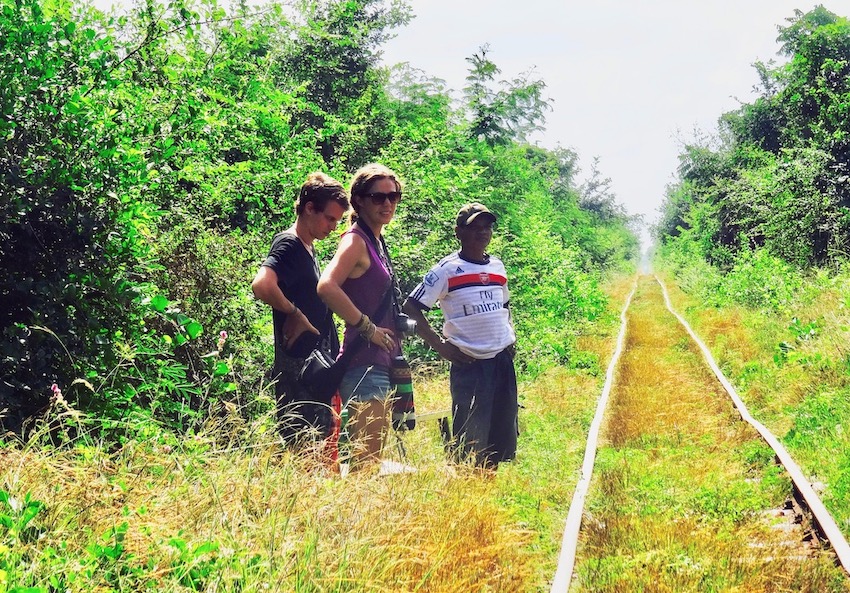 The genius part of the network is the amusing solution to what happens when a train is coming right at you from the other direction. Basically, one of the vehicles has to stop. The driver then asks everyone to get off, before disassembling the train and hauling it to the side of the track. 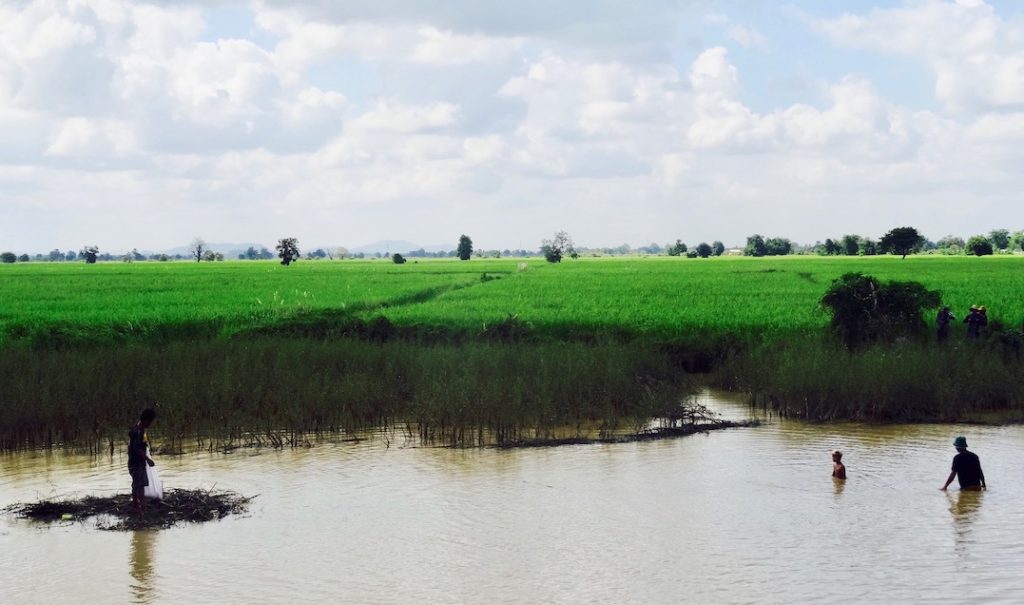 I loved the Battambang Bamboo Train! In addition to being fun and quirky, our driver was really friendly and the lush countryside of rural Battambang is a joy to behold.

In fact, as we whizzed along the track, there were farmer’s fields, residential shacks, rickety wooden bridges and locals fishing in the river. 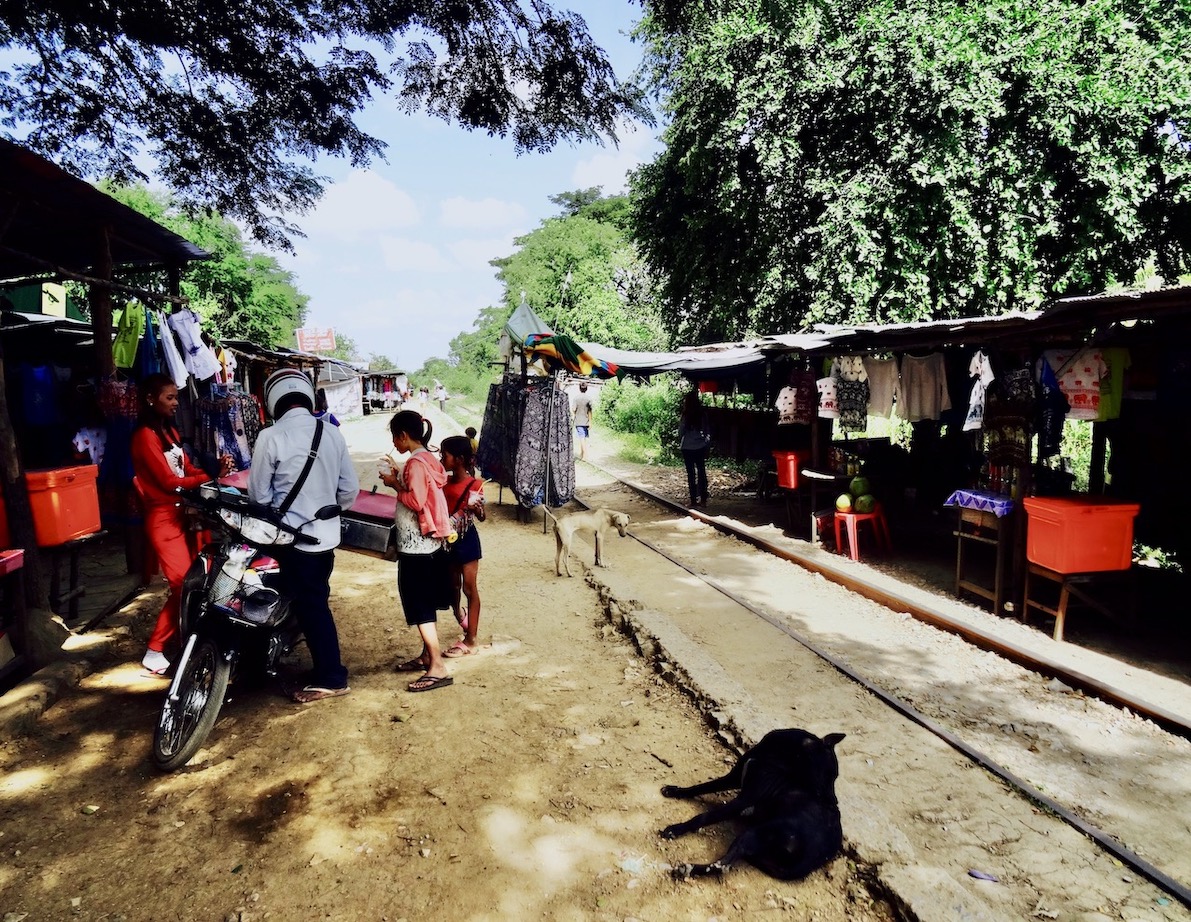 The village of Sra Lav turned out to be little more than a dozen tacky shops manned by a frenzied collection of in-your-face locals. They descended upon us the moment we stepped off the train, with desperate pleas for us to buy something… anything! 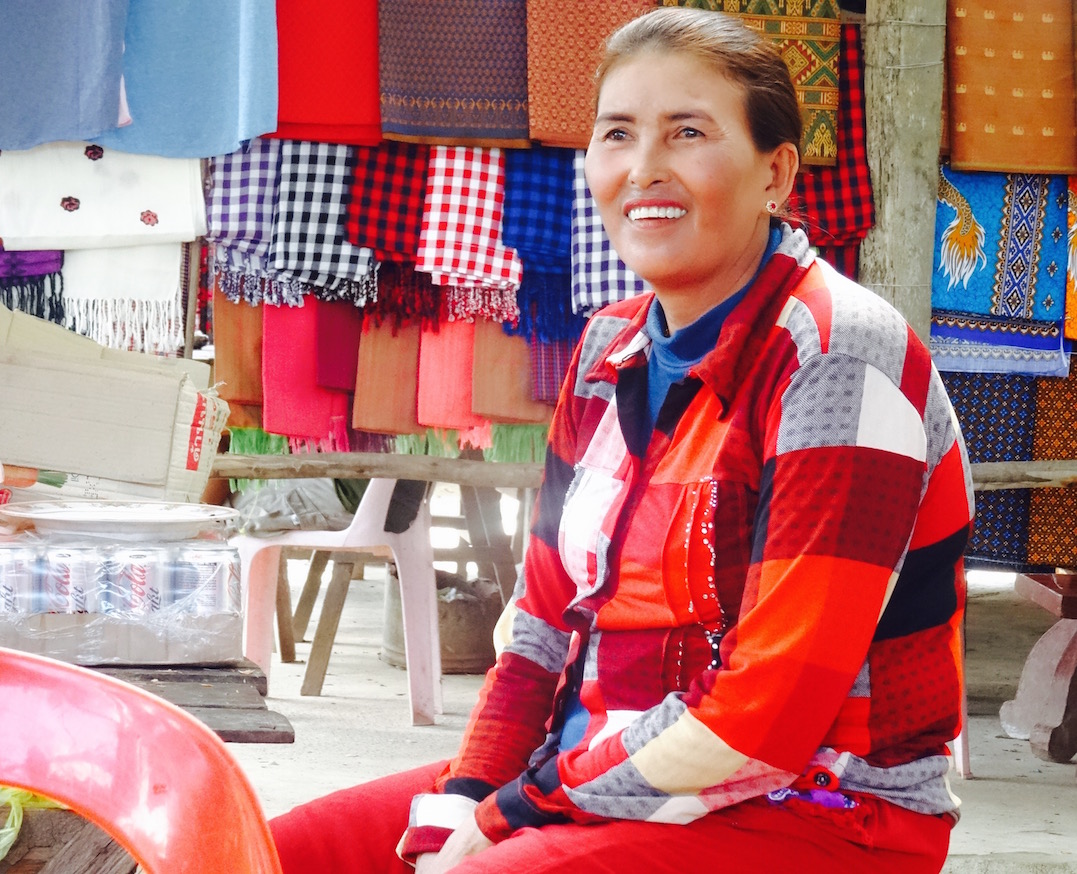 There were teddy bears, snow globes and Hawaiian shirts. Key rings, faded postcards and an inappropriate number of woollen scarves. You name it we didn’t want it! The attention was relentless from everyone except the woman pictured above, who simply grinned as we passed. 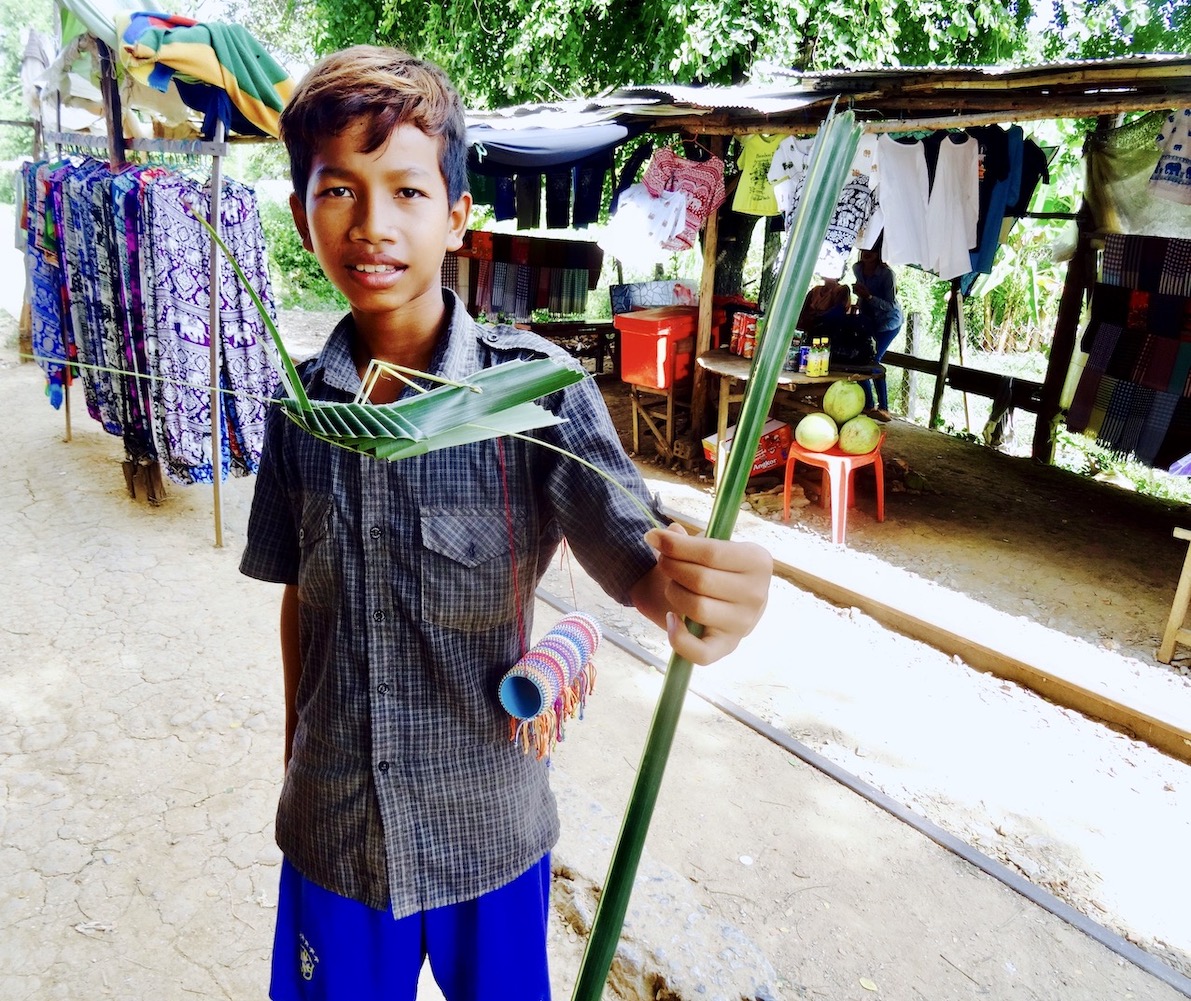 We also had a gaggle of children to contend with. The girls were brutal, vociferously demanding money. When we refused to comply, they stomped their feet and hissed at us. Nevertheless, I did take a shine to the boy who carefully set about crafting a handmade grasshopper from the leaf of a nearby plant.

Although the grasshopper was kinda cool, I just didn’t have any use for it. And seriously doubted whether it would survive the return leg on the train. Finally, I agreed to pay him $1 for the courtesy of a photograph. He seemed more than content with this. 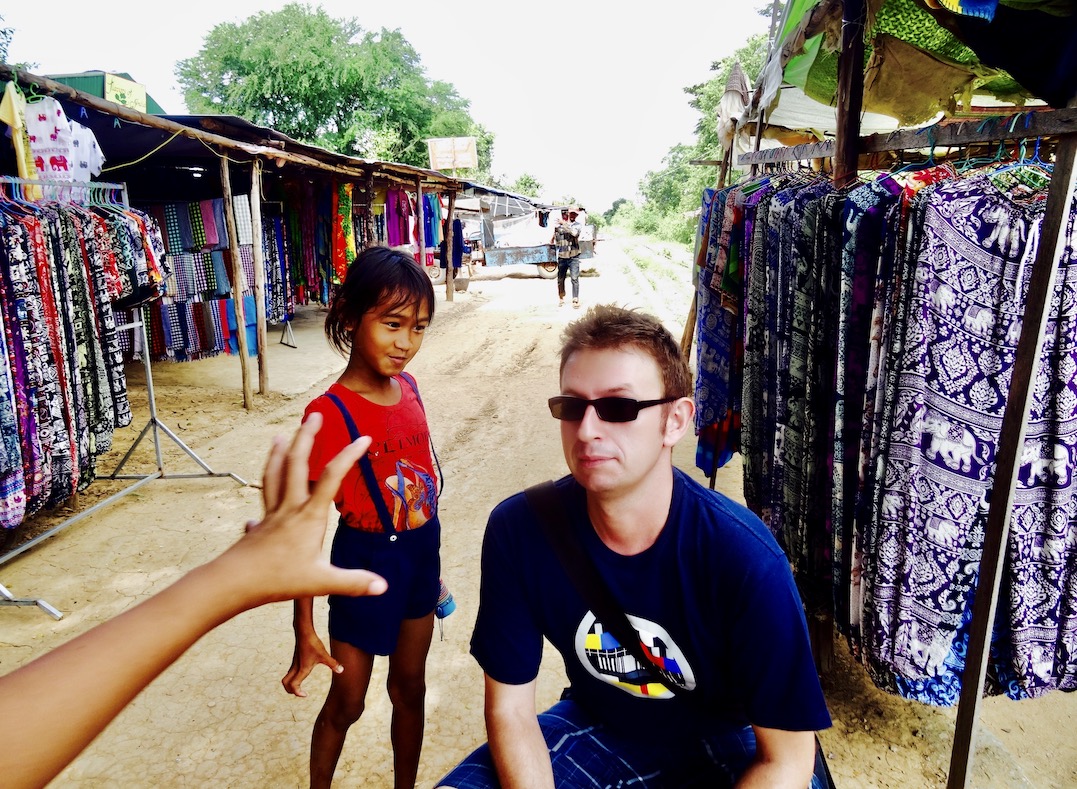 My $1 charity act got me into BIG trouble with the girls. “You are bad man!!!” one of them screamed in a fit of jealousy. Consequently, I told Angry Girl 1 I’d also give her a dollar for a photo. She quickly agreed. However, just as Wonderboy hit click, Angry Girl 2 threw her arm in front of the lens in a petulant act of sabotage. 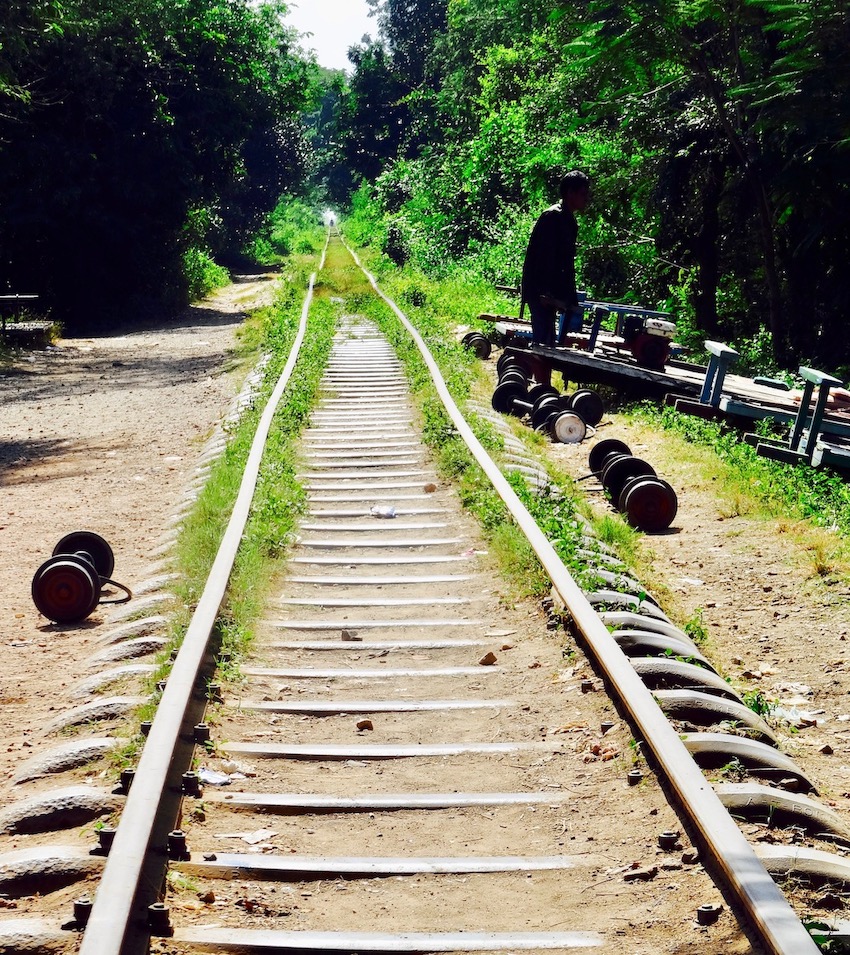 Luckily, we managed to escape Sra Lav alive! We were over halfway back to O Dambong when we saw another train on the line. “Ah bollocks!” exclaimed Wonderboy, “it’s our turn to disembark”. 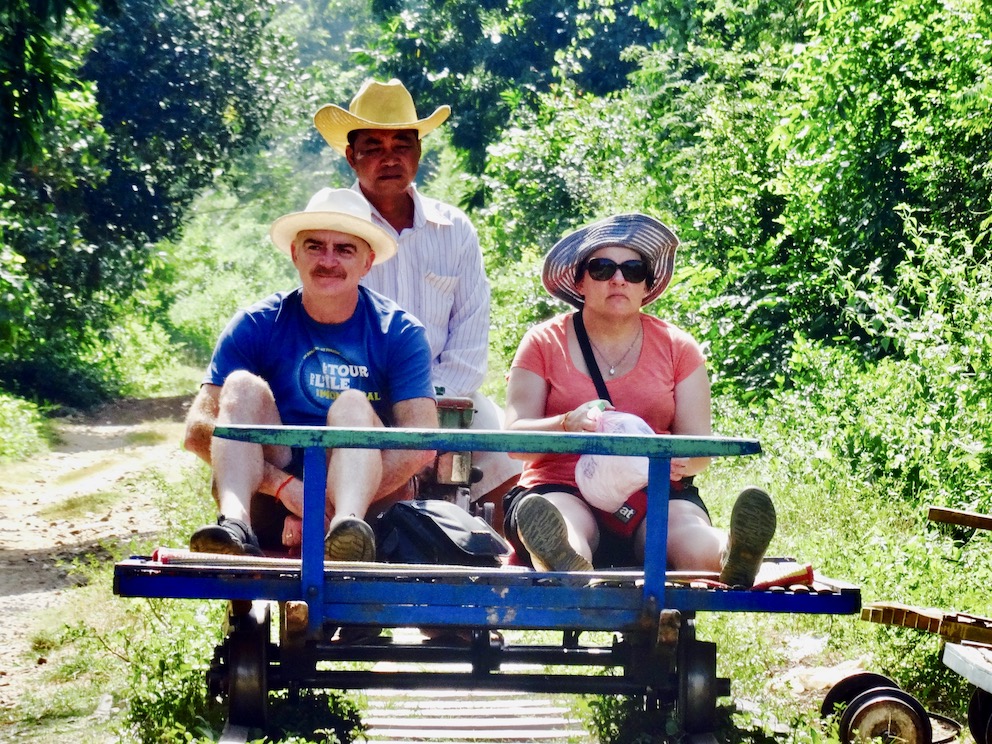 For more on my time here check out my other articles on Battambang.

Like these? Then why not read about my adventures from all around Cambodia.