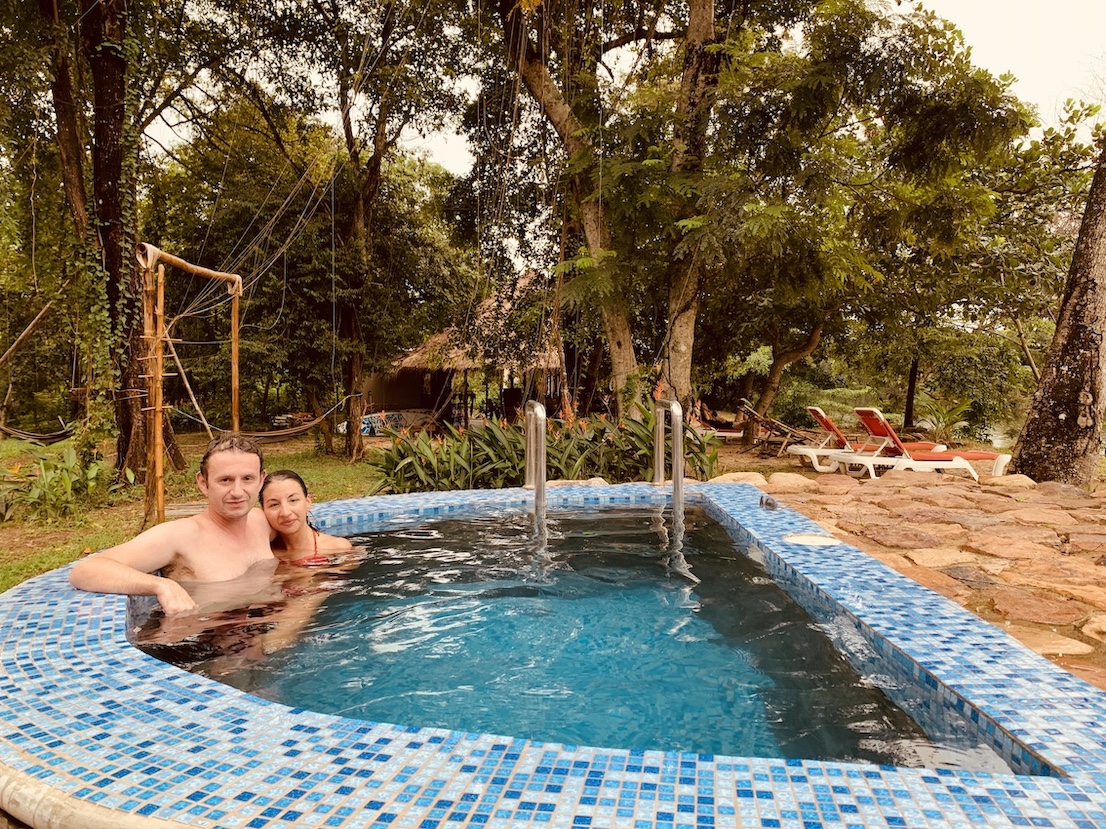 August, 2020. I’ve always been into massage and spas. As a born worrier and chronic overthinker, I need these kinds of treatments to restore some physical and mental balance. Looking back, these chill out days represent some of my most memorable travel experiences.

I recall fondly my day at a traditional hammam in Marrakech and an authentic onsen experience in Tokyo. During my South East China days, I used to go for a full body press once a week, rarely missing an appointment in two years. 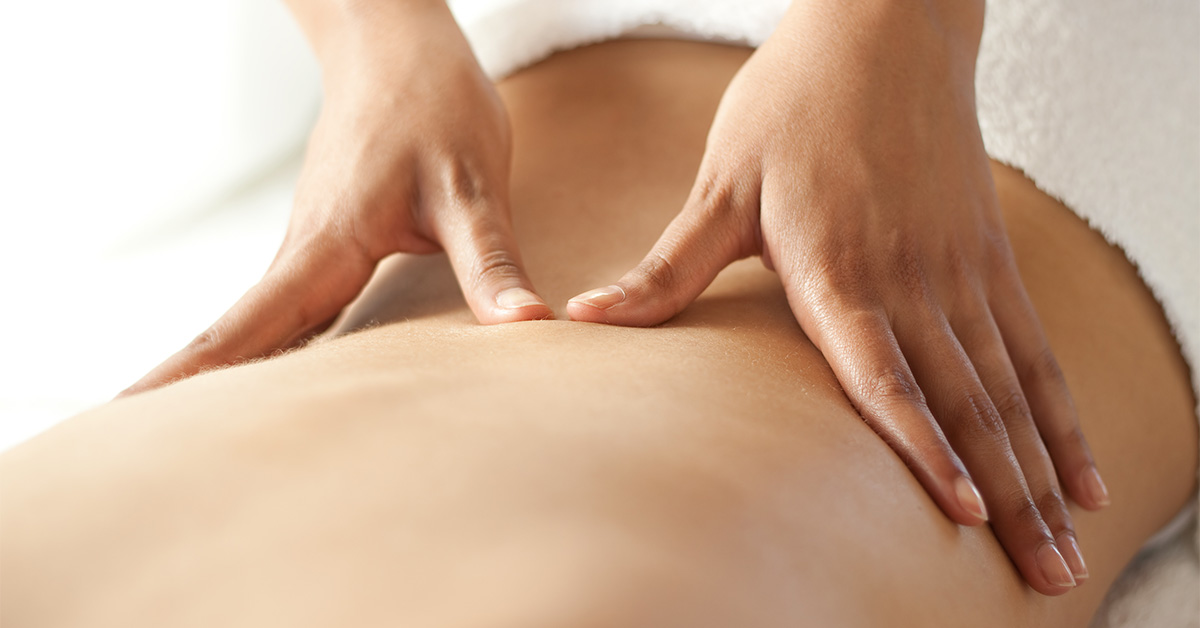 When Sladja and I heard about a fantastic spa in Kampot with an astounding location, we knew we had to go. Set on the banks of The Praek Tuek Chhu River, deep in rural Kampot, Nibi Spa is not an easy place to reach. There are numerous longwinded ways to get there, but as non drivers we opted for the tuk tuk + boat combo.

Firstly, we hailed a tuk tuk from Kampot’s city centre, which took us to the isolated Green House restaurant and bungalows. After a spot of lunch there, we asked the manager to call Nibi. Within a few minutes there was a boat buzzing across the river to come and collect us.

Nibi Spa is the inspired creation of Eric and Karine, a couple from Montreal, Canada. It was Eric who came to pick us up from Green House. Clambering onboard, we took in the fine views as Eric whizzed us across to the other side. As spa arrivals go, this was definitely one to remember! 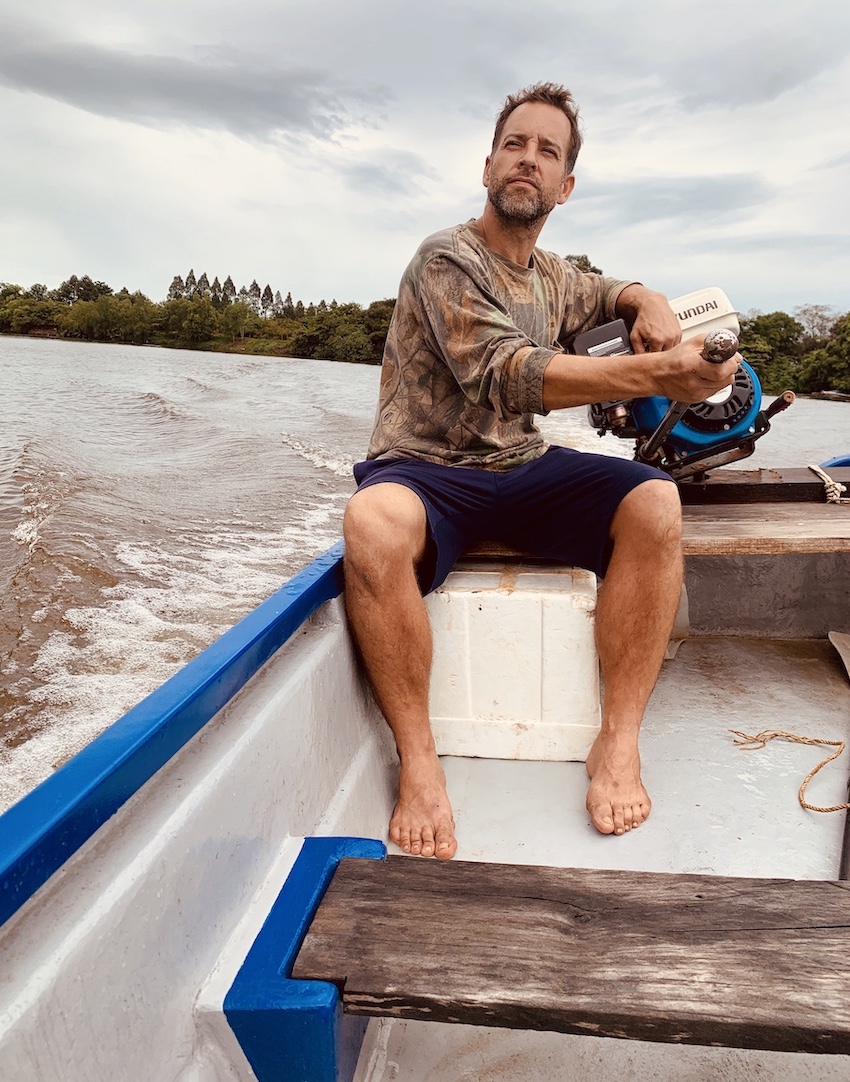 Disembarking, Sladja and I made our way along the wooden jetty into Nibi Spa’s huge jungle garden. The entire compound is absolutely gorgeous, a veritable tropical paradise that took Eric and Karine eighteen months to make.

It’s impossible not to be impressed, especially when you realise they started with nothing but an empty patch of scrubland. 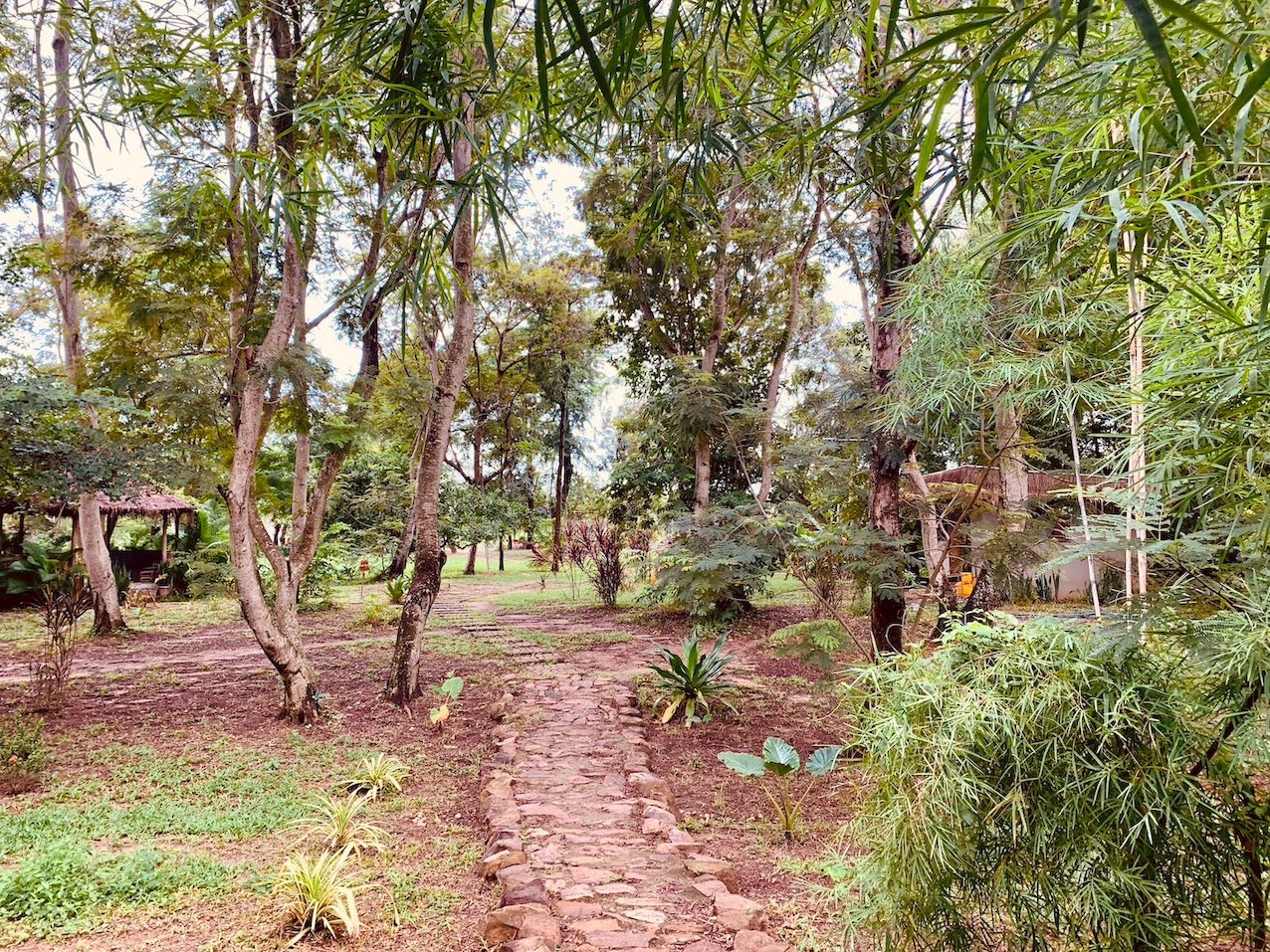 “Welcome to Nibi Spa!” called Karine, strolling over. She is softly spoken and down to earth, oozing exactly the kind of calmness a spa owner should have. This is no mere coincidence. She and Eric have been spa lovers for years, regularly visiting establishments both in their native Canada and while travelling abroad. 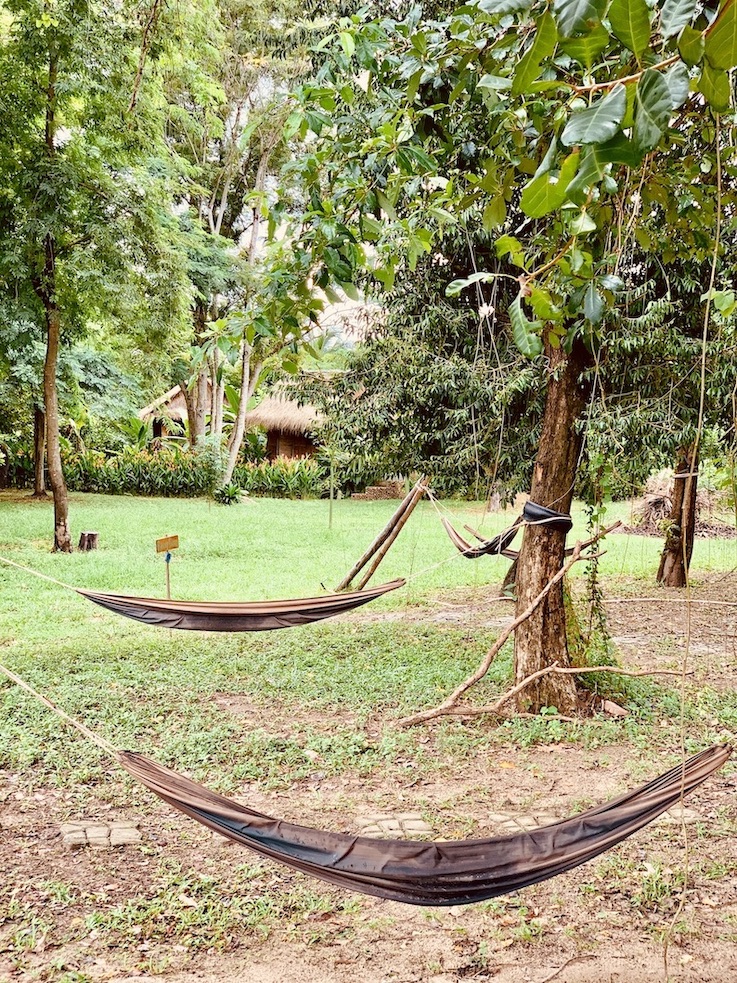 Eventually, they decided it was the kind of business they wanted to run themselves. They chose Kampot due to their love of the region’s river landscape and because of their affinity with the kind Khmer people. The word Nibi, which means “calm flowing water”, comes from the language spoken by The Algonquin, a Canadian native tribe.

Karine and Eric opened their doors in 2018 and saw their reputation rapidly rise. Indeed many people insist Nibi is “the best spa in Kampot”. 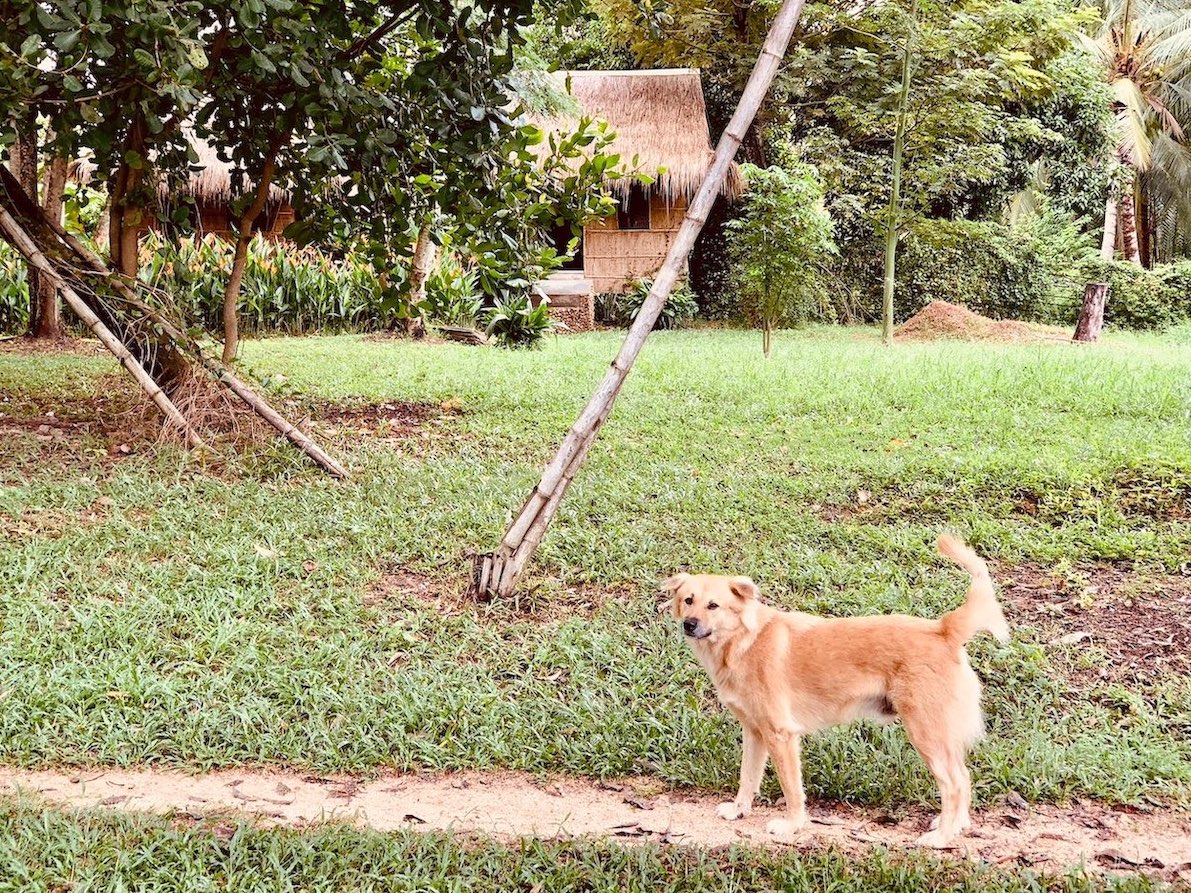 Karine led us to the end of the garden to reception, where we could check in, so to speak. Along the way, we met Bernie, one of two rescue dogs who gives Nibi even more of a homely feel. 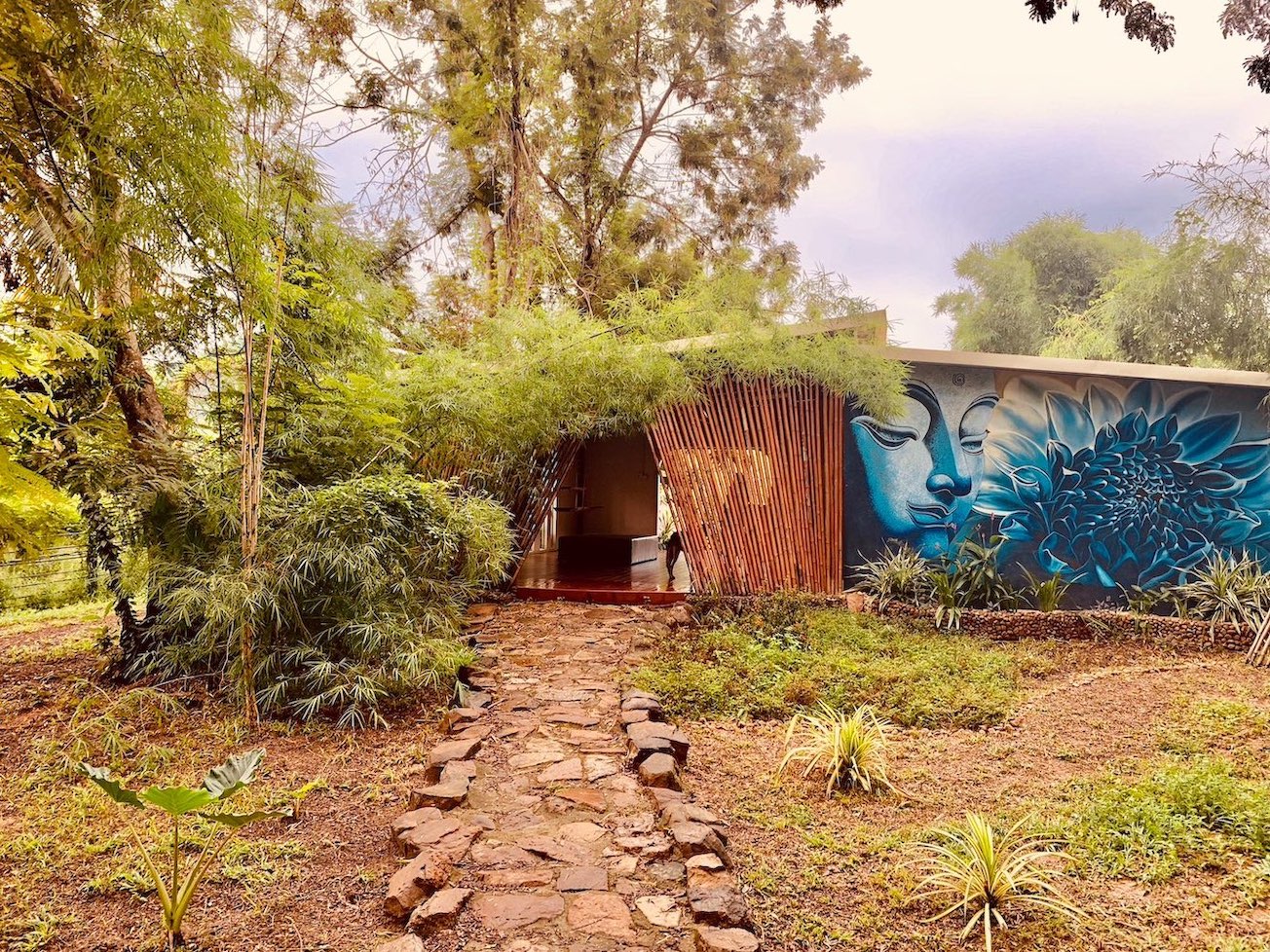 At reception Karine asked us to fill out a short consultation form. This was our chance to confirm any medical conditions and how hard we wanted our massages.

Moreover, you can announce any areas of discomfort. Perfect for me, as I was still recovering from a recent second degree finger burn. It’s all very professional, setting the tone for a relaxing afternoon. 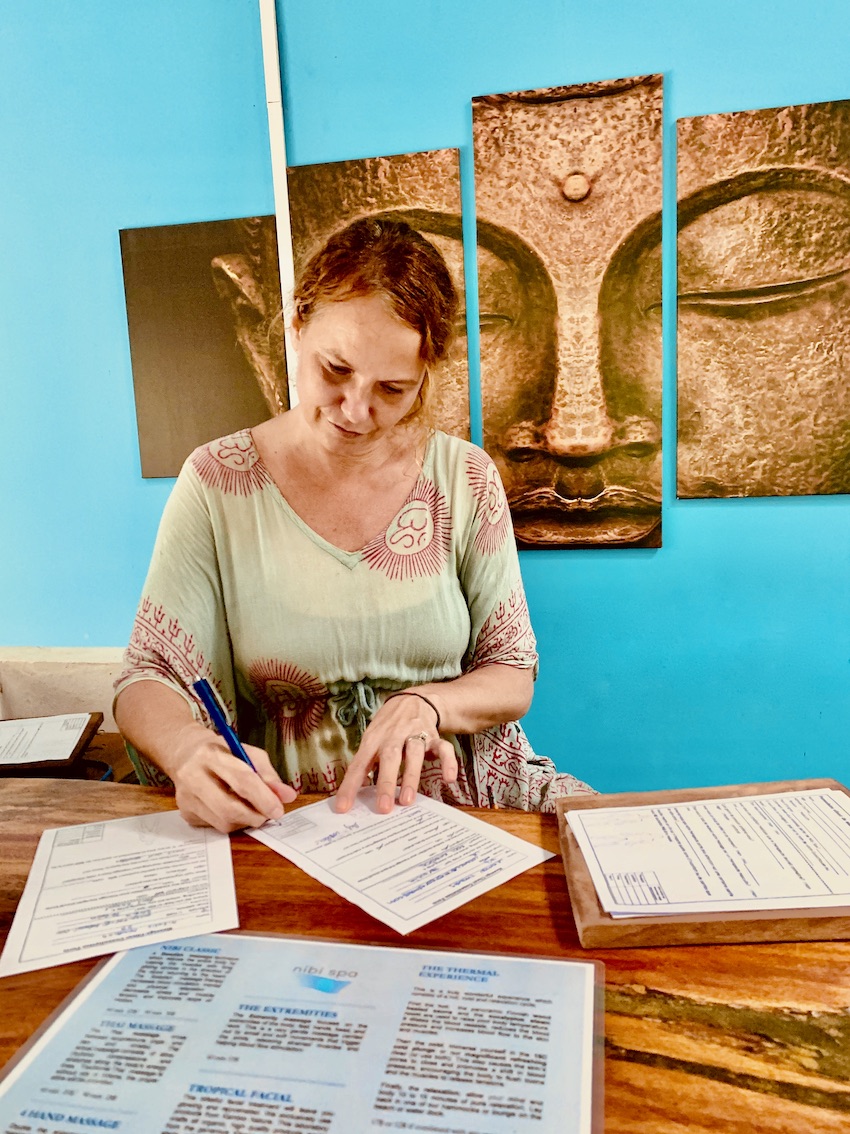 Nibi’s therapists are local women, as Karine and Eric were keen to give opportunities to folk from the surrounding villages. According to Karine, they took care to employ people “who had no experience, but amazing attitudes and the ability to learn”.

Each therapist has been professionally trained and Karine is proud that she has retained the same team that she opened with two years ago. “I think they were really brave!” says Karine, referring to the women’s initial uncertainties and the language barrier. 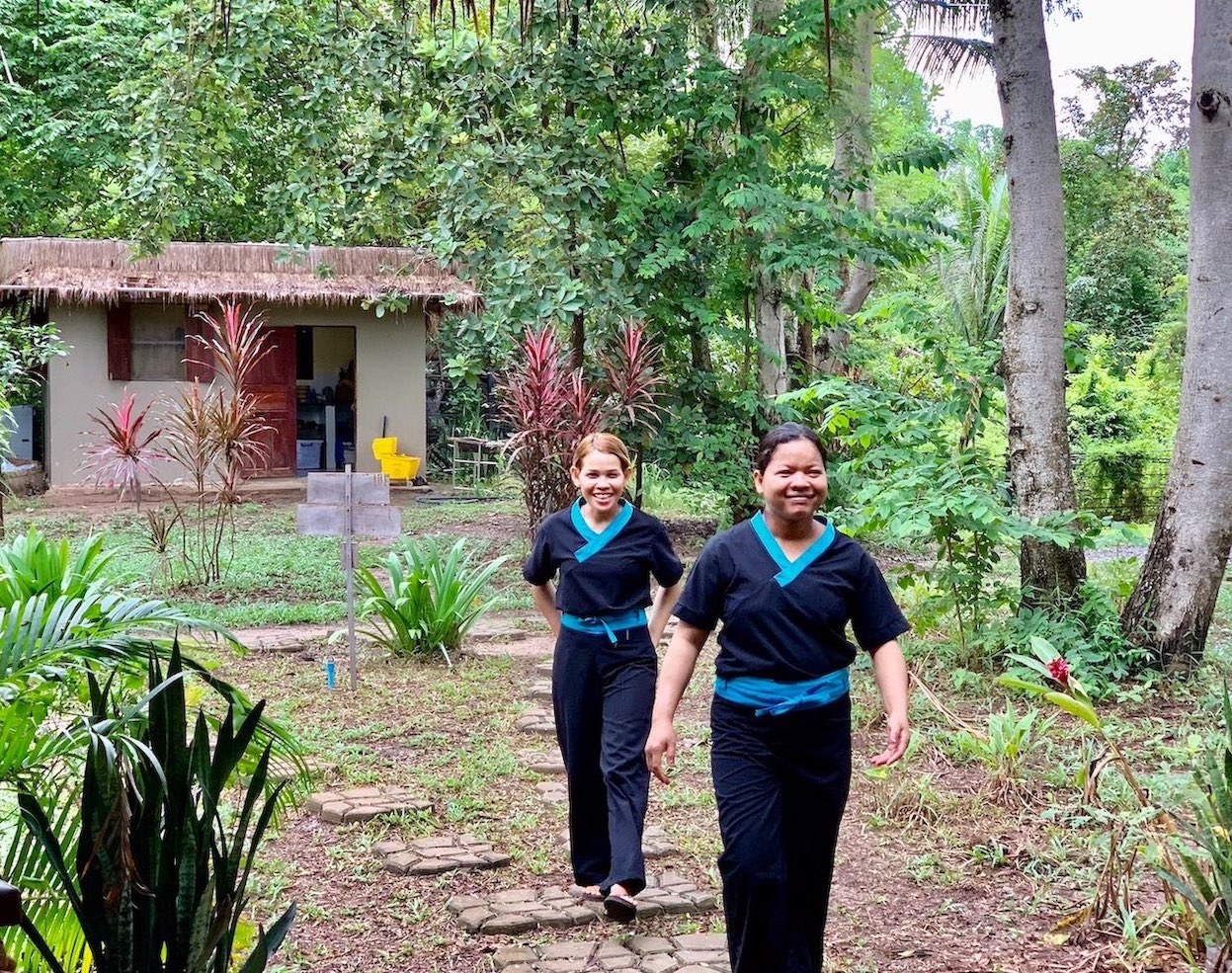 That afternoon Sladja headed off to one of the idyllic little huts for the Nibi Classic Massage. This Swedish style rub, characterised by its long, gliding strokes, helps increase blood circulation and decreases stress and muscle tension. Priced at $23 for an hour, $30 for ninety minutes, this is Nibi’s most popular massage. 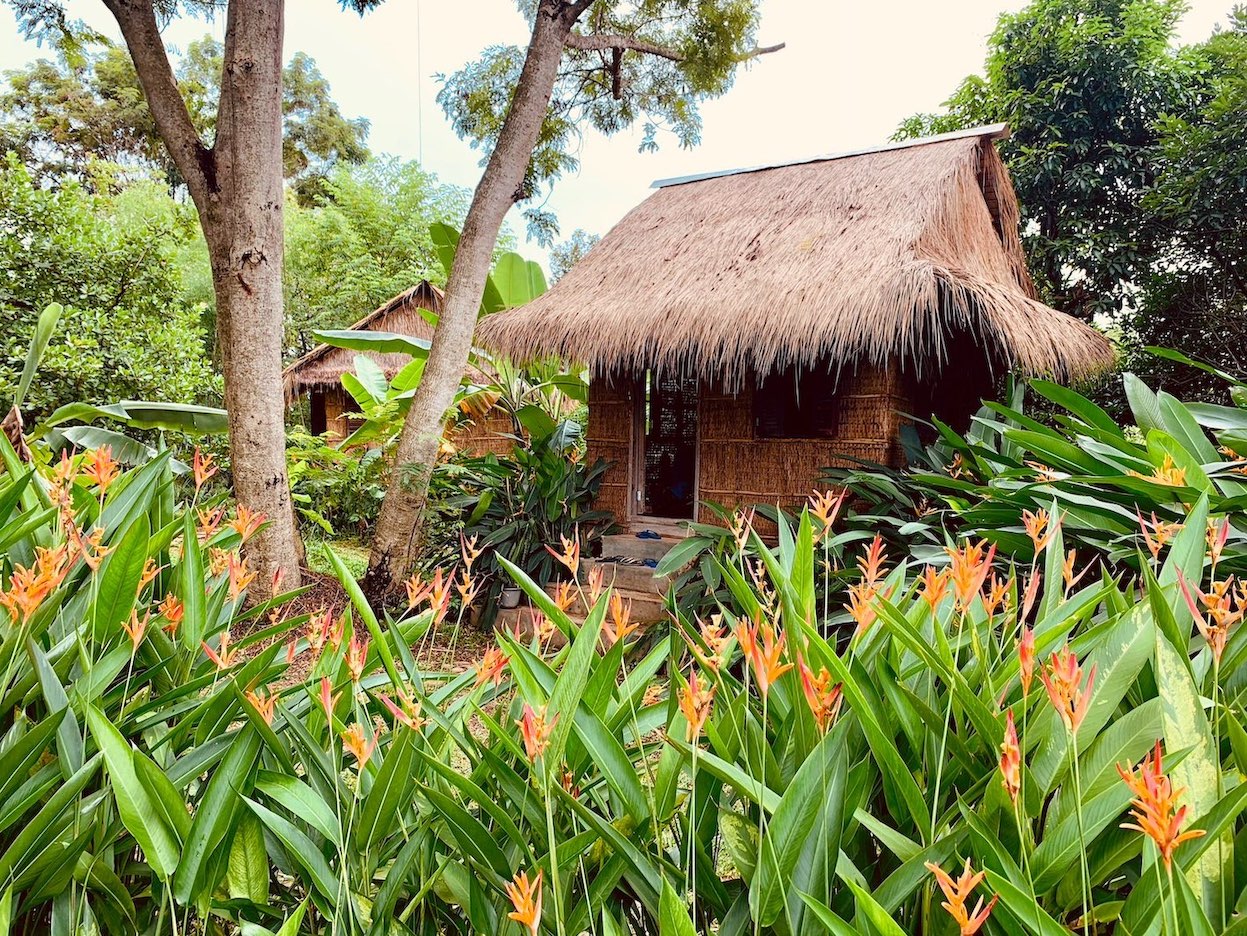 I opted for The Thai Massage, known for its slow, rhythmic compressions and stretches along the body’s energy lines. It’s good, they say, for increasing flexibility and for reducing lower back pain. Which was great for my (at that time undiagnosed) Flat Back Syndrome.

Just as pleasing as the massage itself, my hut was right down by the riverbed, which meant I got some incredible views while I was lying on my front. The Thai Massage is $21 for an hour, $28 for ninety minutes. 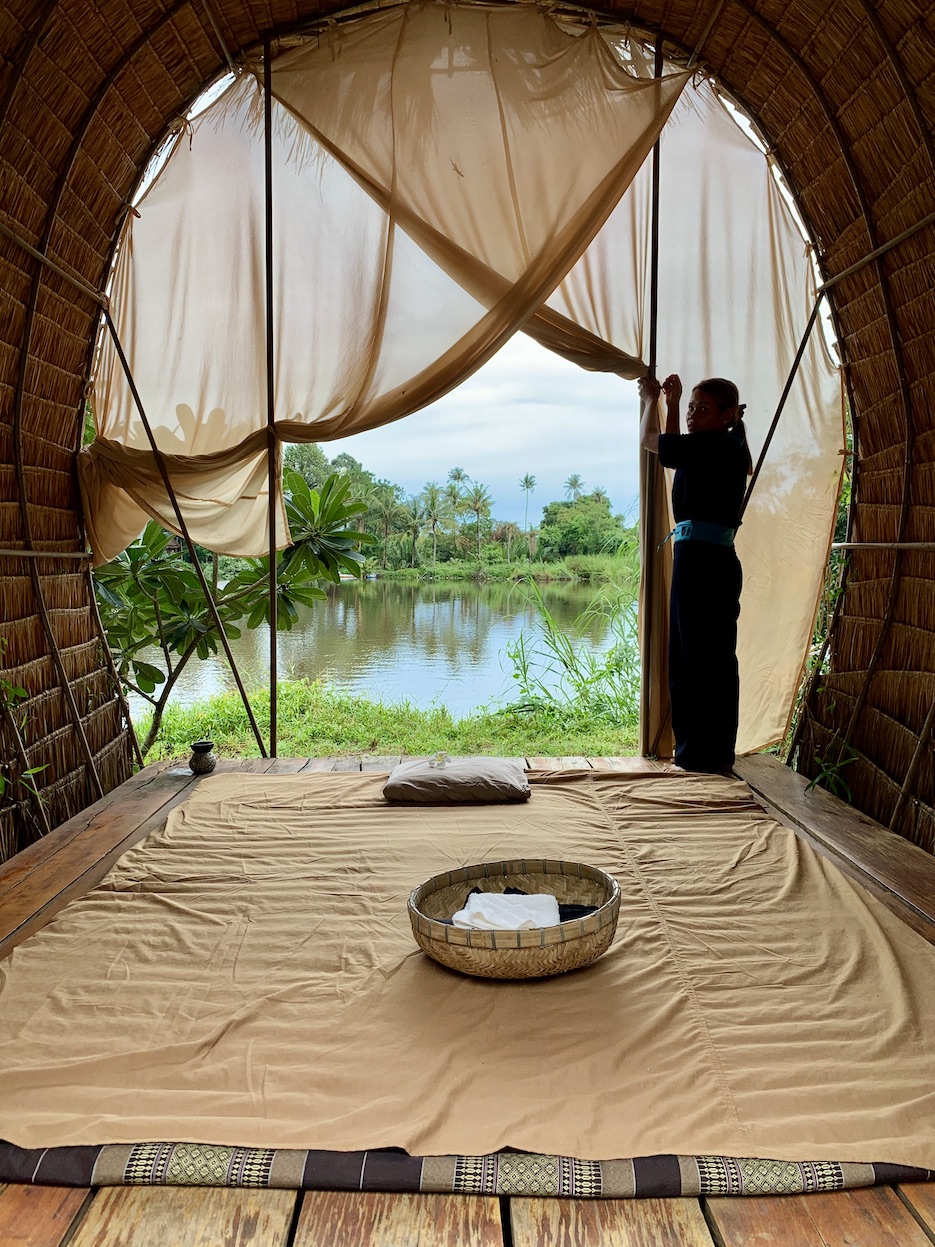 A massage with a view.

Following our excellent massages, we were ready to test out the spa facilities. You can grab a standard full day pass for $17 per person. However, if you take a massage as we did, then this price drops to $12 each. A pretty good deal.

Nibi’s setup consists of a hot-cold relaxation cycle, thus we kicked things off with a session in The Eucalyptus Steam Room. ​Positioned far right in the below photo. 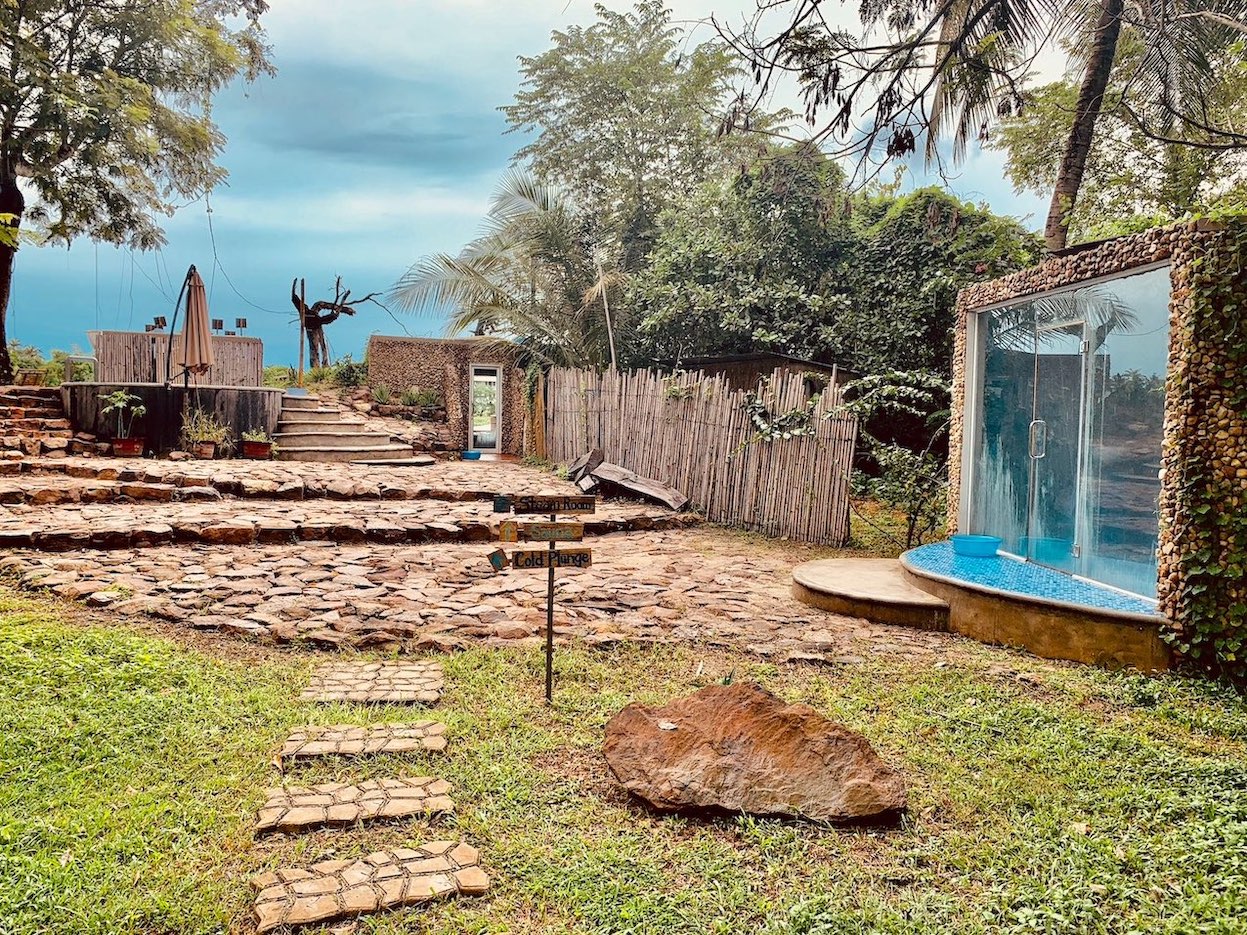 We loved the steam room! The increased body temperature dilates the blood vessels, reduces blood pressure and increases blood flow to the skin and muscles. When we couldn’t stand it anymore, Sladja and I hopped over to The Cold Plunge. As soon as you hit the water you’ll find yourself screaming out. 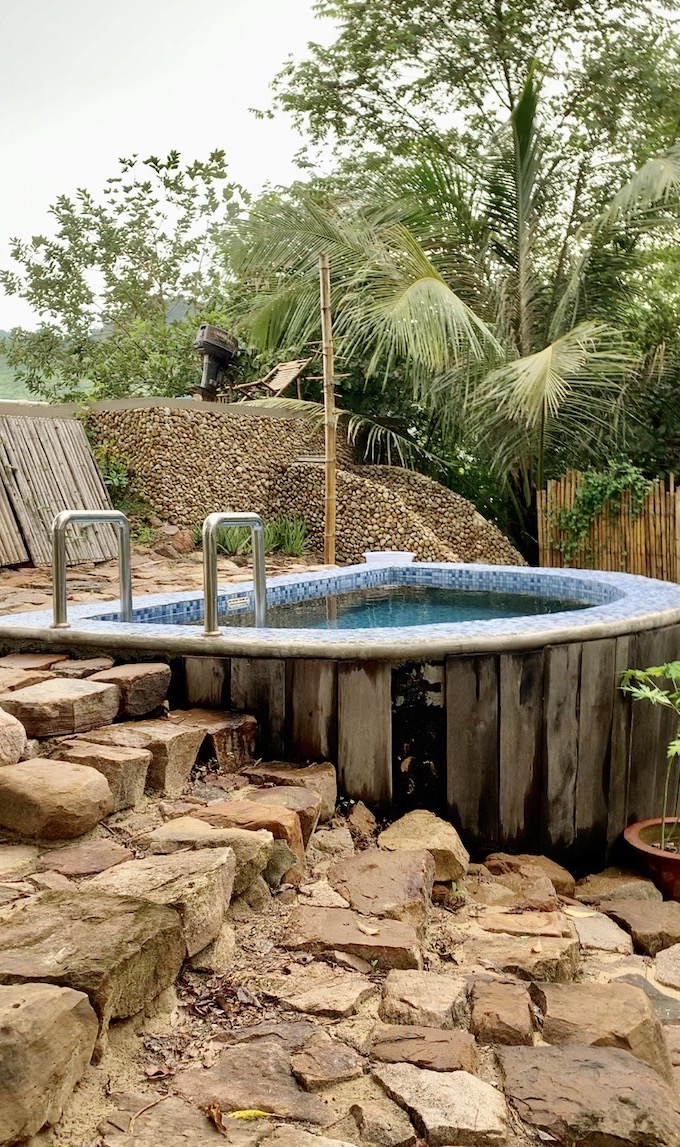 I believe my exclamation was somewhere along the lines of “f***********ck!” The sensation causes a shift in blood pressure, closing the skin’s pores and encouraging the body to flush out toxins and release tension.

After the cold plunge we decamped to the open air lounge for a fifteen minute break, allowing our cardiovascular systems to do their thing. Gazing out across the river, it was another moment that hammered home just what a magnificent place Eric and Karine have made for themselves and their customers. 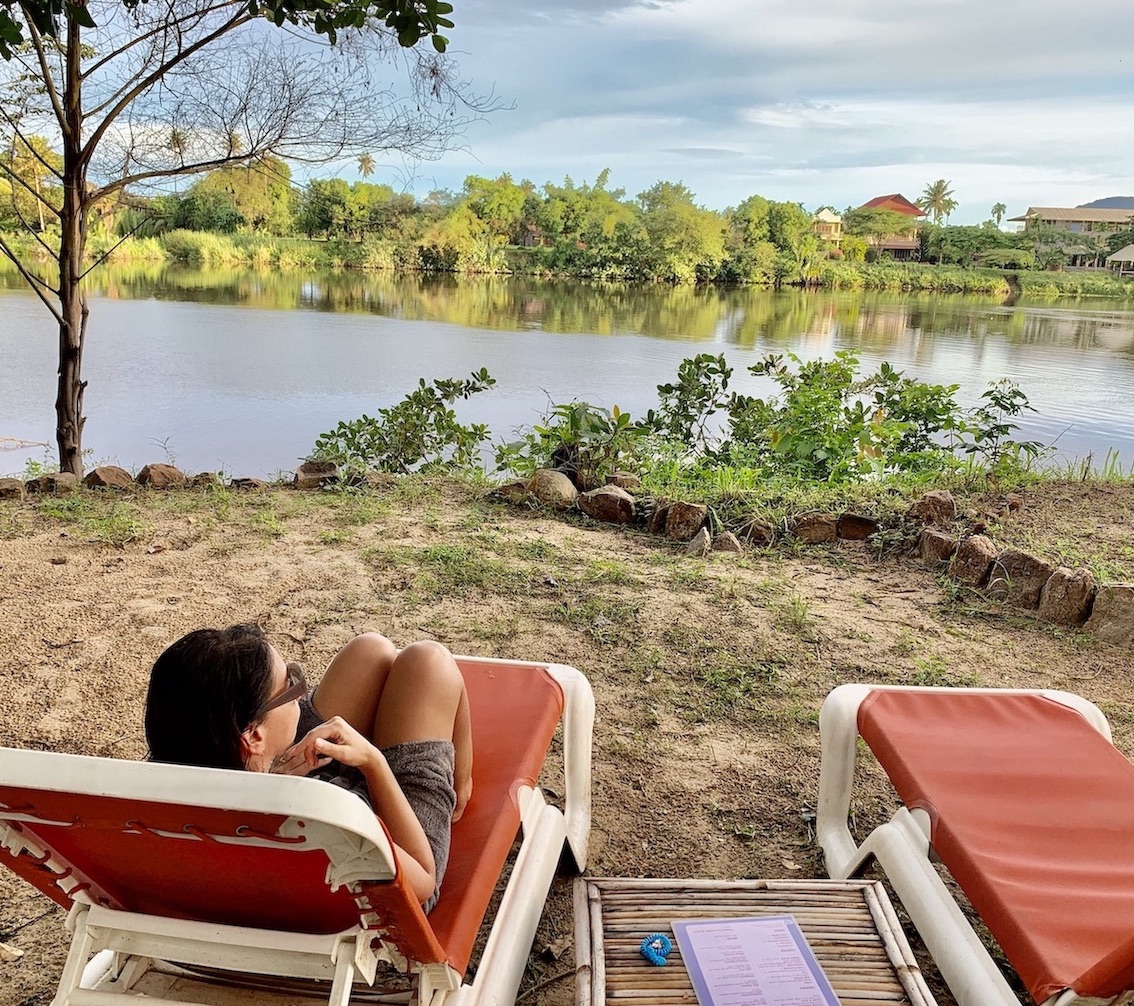 The amazing views at Nibi Spa.

While you’re chilling out, it’s also possible to order some food and drinks from Nibi’s onsite gourmet bistro. It was here that we met Eric and Karine’s second rescue dog, Bruno. Saved from the streets of Kampot where he was found in a terrible state, Karine describes Bruno as “a happy, goofy, gentle old giant”. 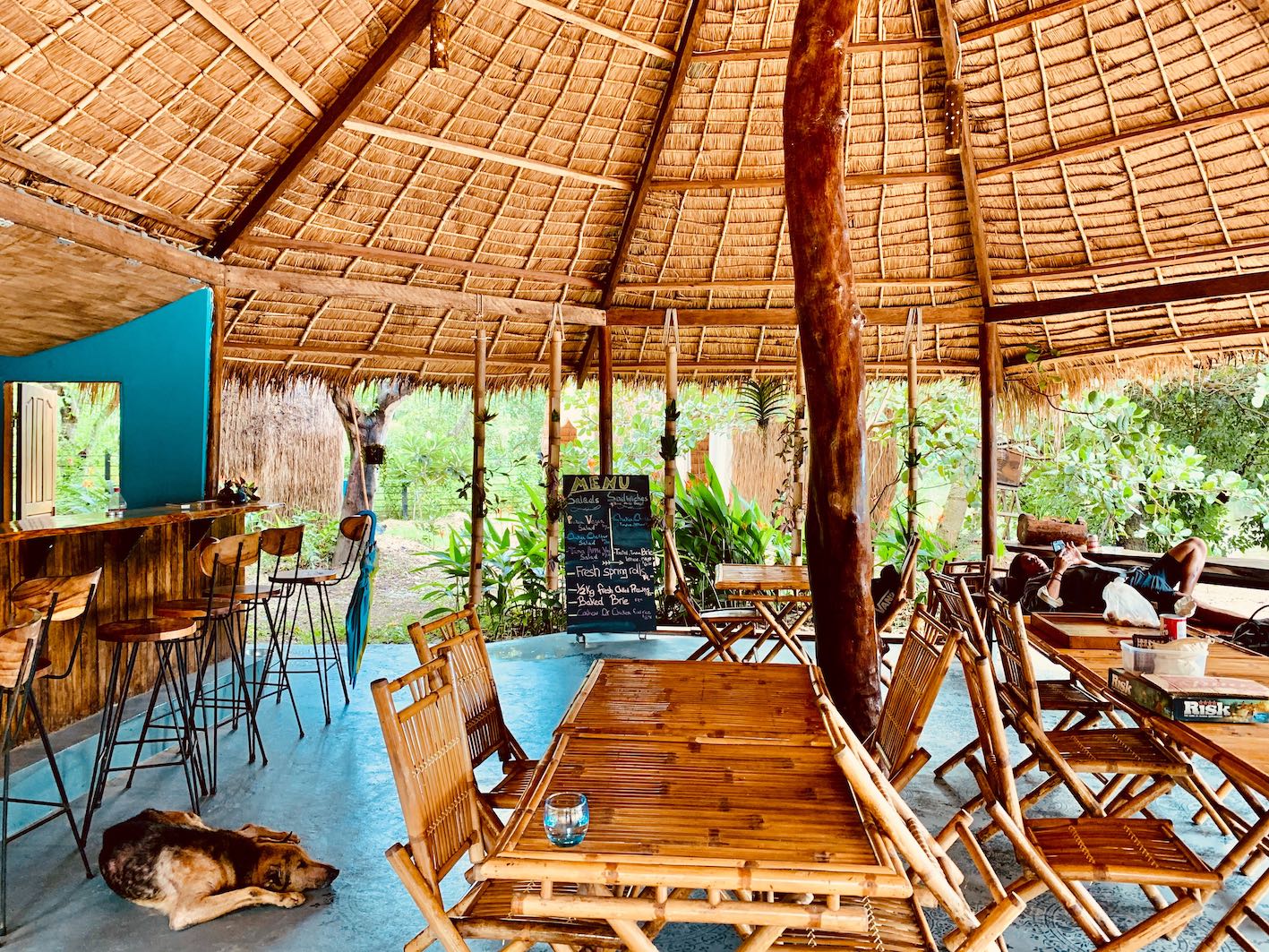 He clearly loves his new home, where the grass is much kinder to his paws than the hot, concrete city streets. When he arrived, Bruno was dangerously thin. Happily, he’s since gained ten kilos. And enjoys the food at Nibi so much, he perpetually follows Karine around with a hopeful glint in his eye. 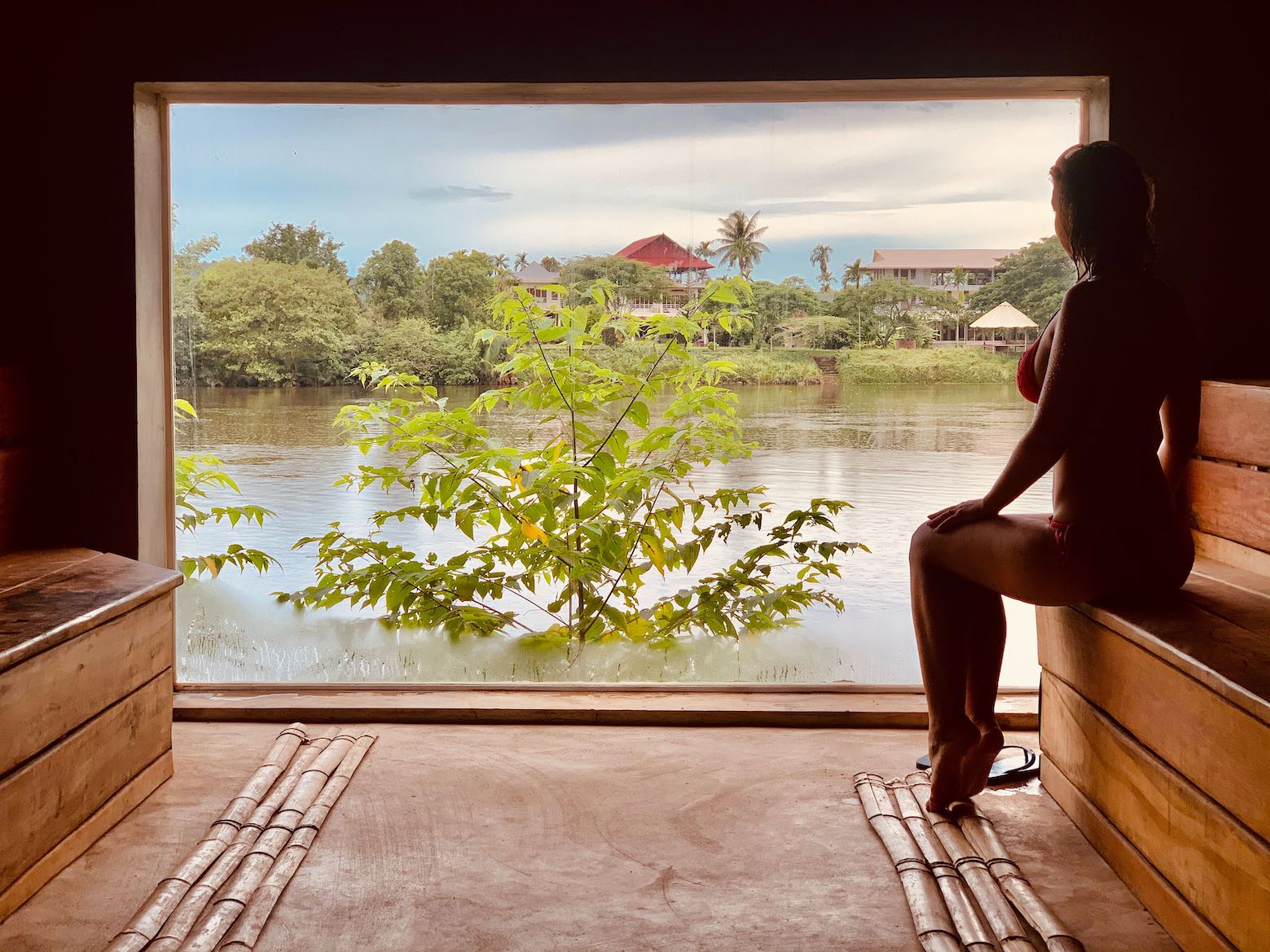 Ready for another round of hot-cold, this time we substituted the steam room for the sauna. And yes, more stunning river views. Eric constructed the sauna from Finnish wood and it’s a surprisingly large space. Easily big enough for 12-15 people, when social distancing is no longer a concern. Not that Sladja and I had to share it with anyone else. 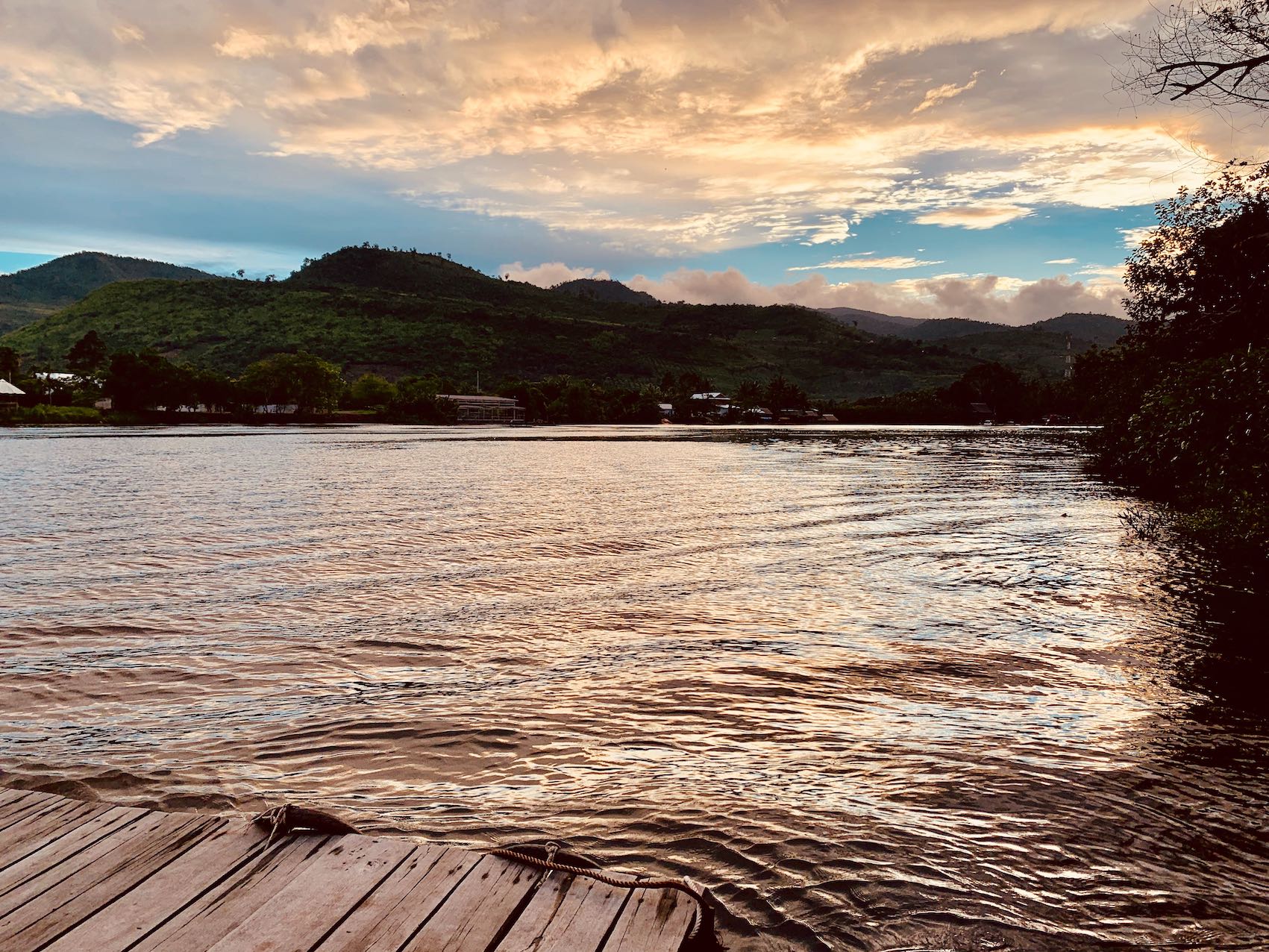 Late afternoon was rapidly blending into early evening by the time we bid farewell to Nibi Spa. Firing up the boat, Eric brought us back over to the other side of the river to Green House. From there, a bumpy tuk tuk ride home awaited.

Five months on from our visit and I’m really pleased to hear that Nibi has survived the decimation of Cambodia’s tourist industry. But it’s been tough. They had to let around three quarters of their staff go. What’s more, they’ve reduced their days of operation from seven days a week to three.

Karine says she and Eric are grateful to loyal expats and locals, who’ve played a key role in helping them stay afloat. Like so many other struggling business we saw around Cambodia, we wish them all the best for 2021! 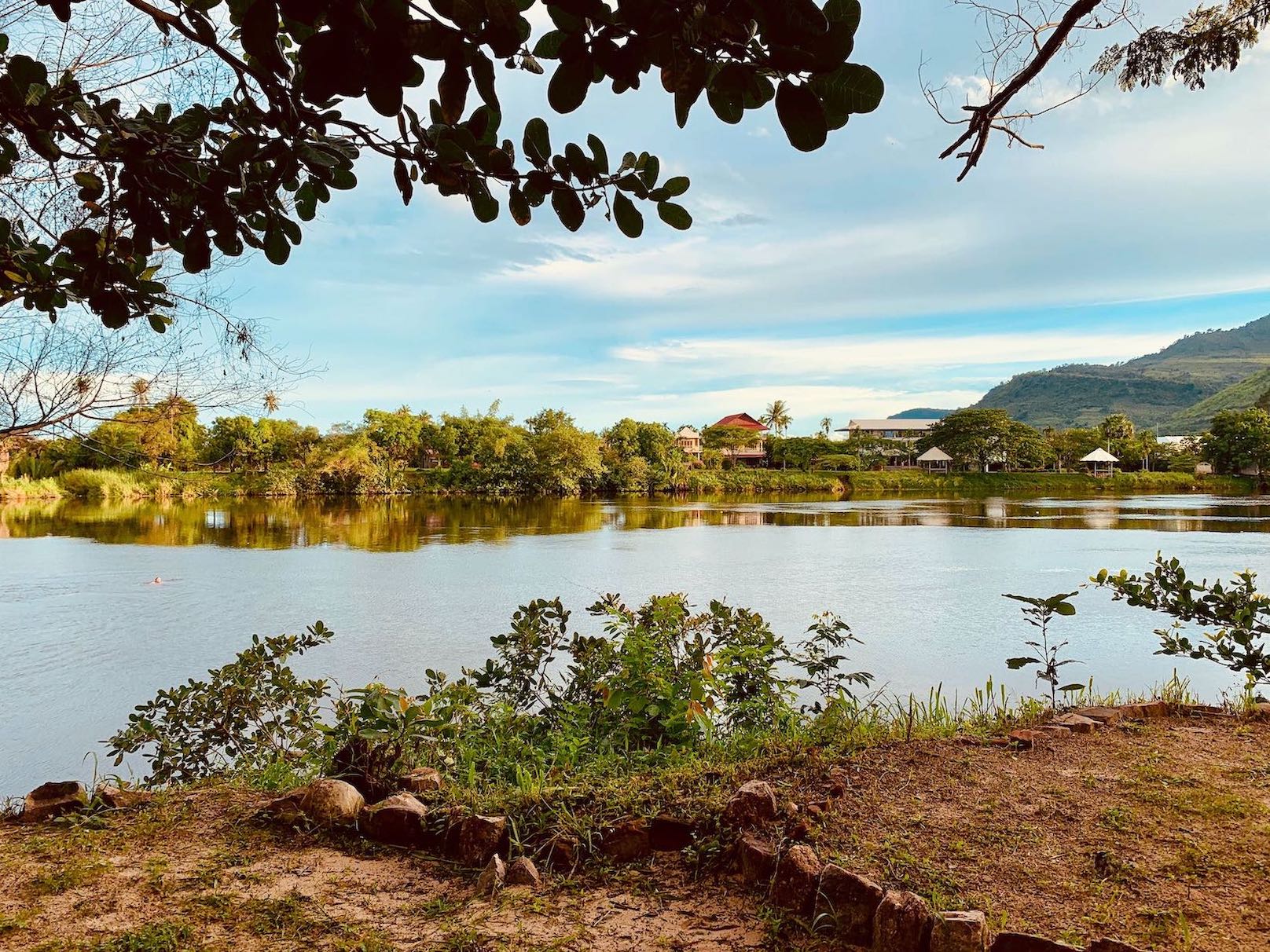