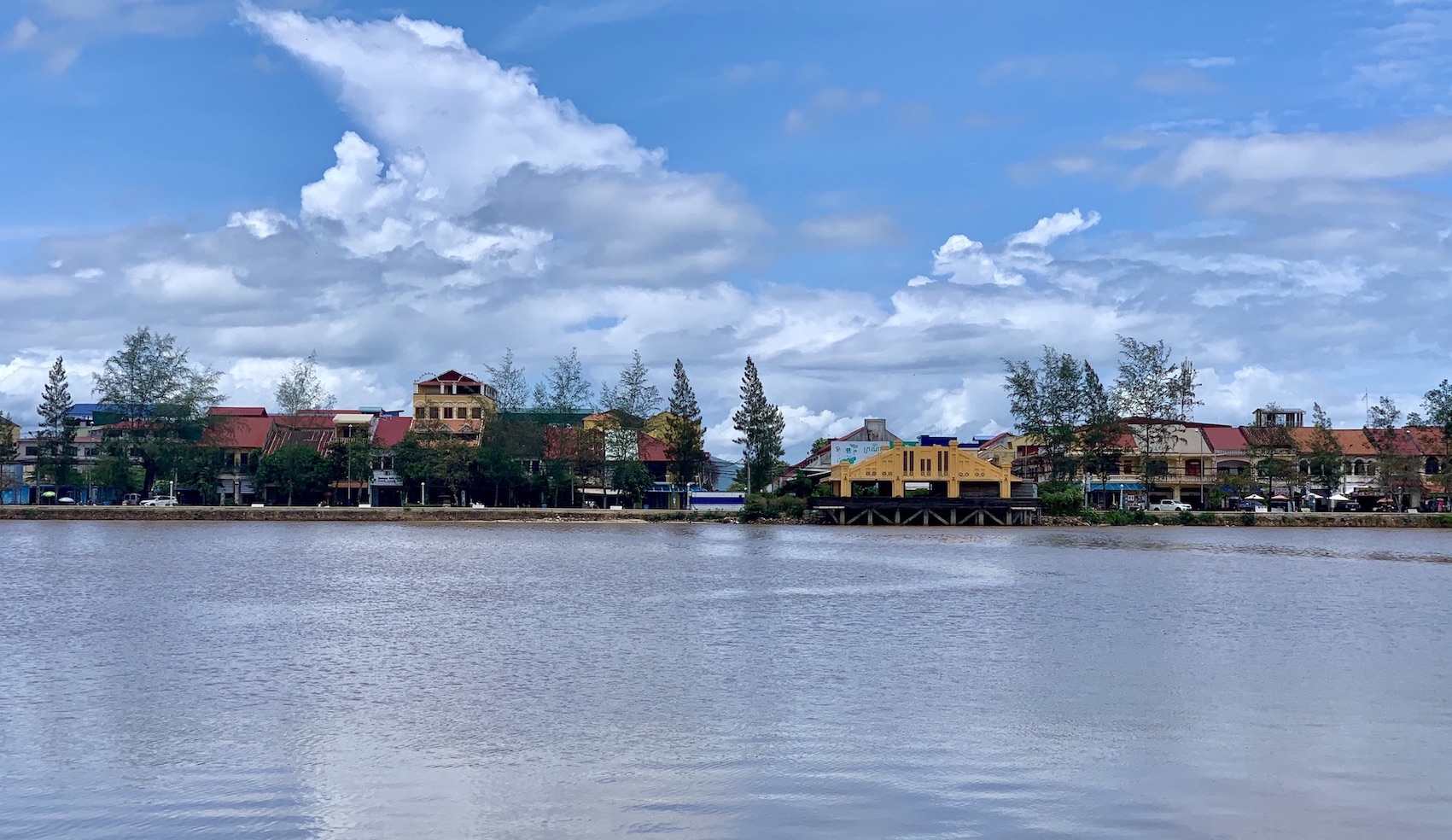 August 2020. There’s a charming languor to the Cambodian city of Kampot. On my first visit here with Wonderboy in 2015, we both remarked on how it felt more like a small town than a city. The kind of place where you can (and we did) while away an entire day in the cafes and bars of the colonial old quarter. 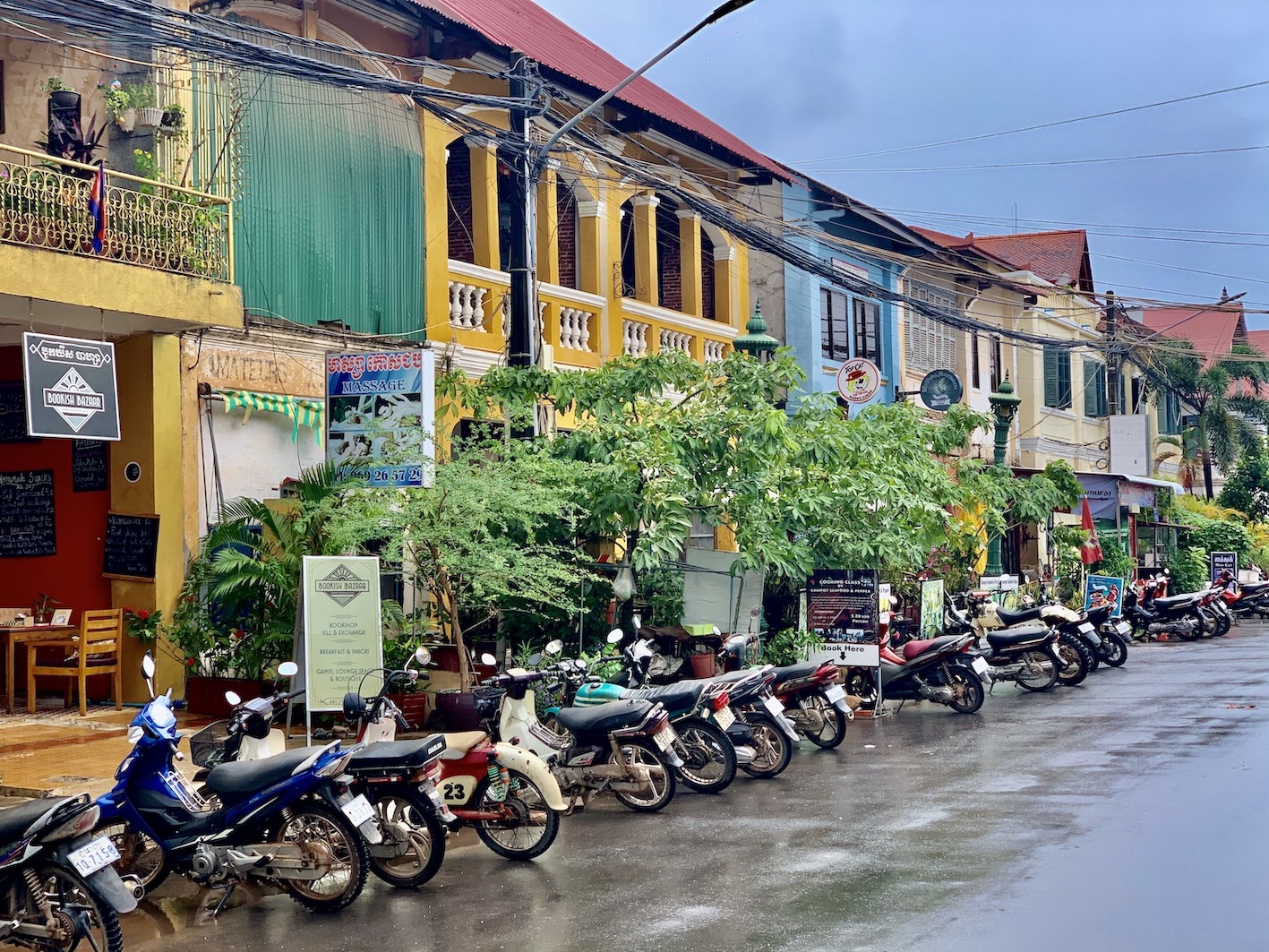 Imagine then, just how lazy the vibe was when Sladja and I arrived in the middle of the Coronavirus Pandemic. Stripped of tourists, we found Kampot reduced to something more fitting of a village.

It was just what we were looking for! A place from which we could a) not catch COVID and b) contentedly cocoon ourselves teaching and blogging online. 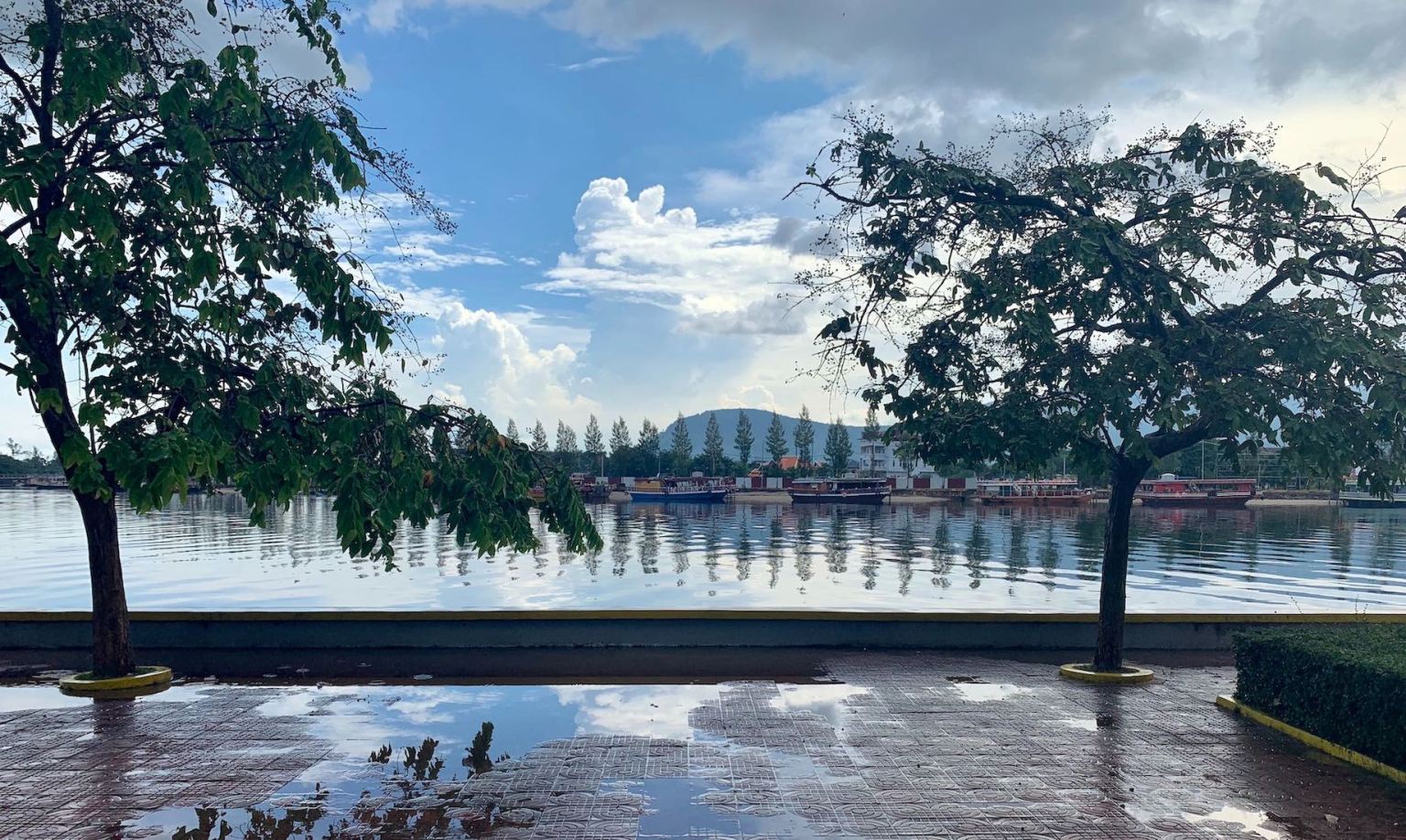 At the very heart of Kampot’s lovely laziness, stands The Praek Tuek Chhu River, known among expats simply as The Kampot River. Immediately, Sladja and I loved the little breeze that comes in off the water. Something definitely lacking in the dustbowl city centre of Siem Reap. Running north through downtown Kampot, the river was a constant in our everyday lives during our two month stay. 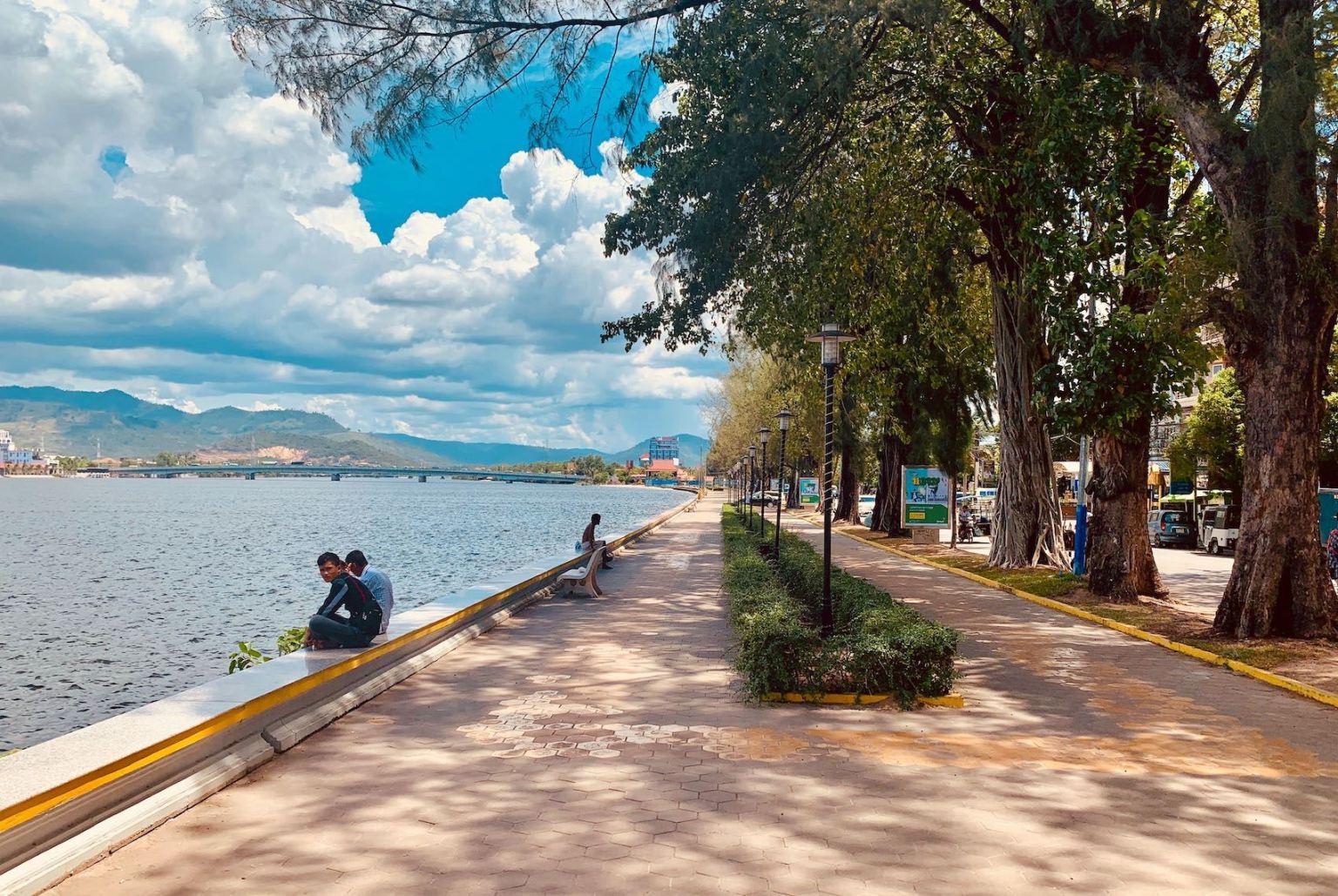 Each day, to fend off the claustrophobia of all the time we spent in front of our computer screens, we’d take the fifteen minute walk into the old quarter from our guesthouse.

Another little victory Kampot had over Siem Reap was its pedestrianised promenade on the river’s eastern bank. In fact, it felt positively liberating to walk unmolested by aggressive street dogs and maniacal tuk tuks. 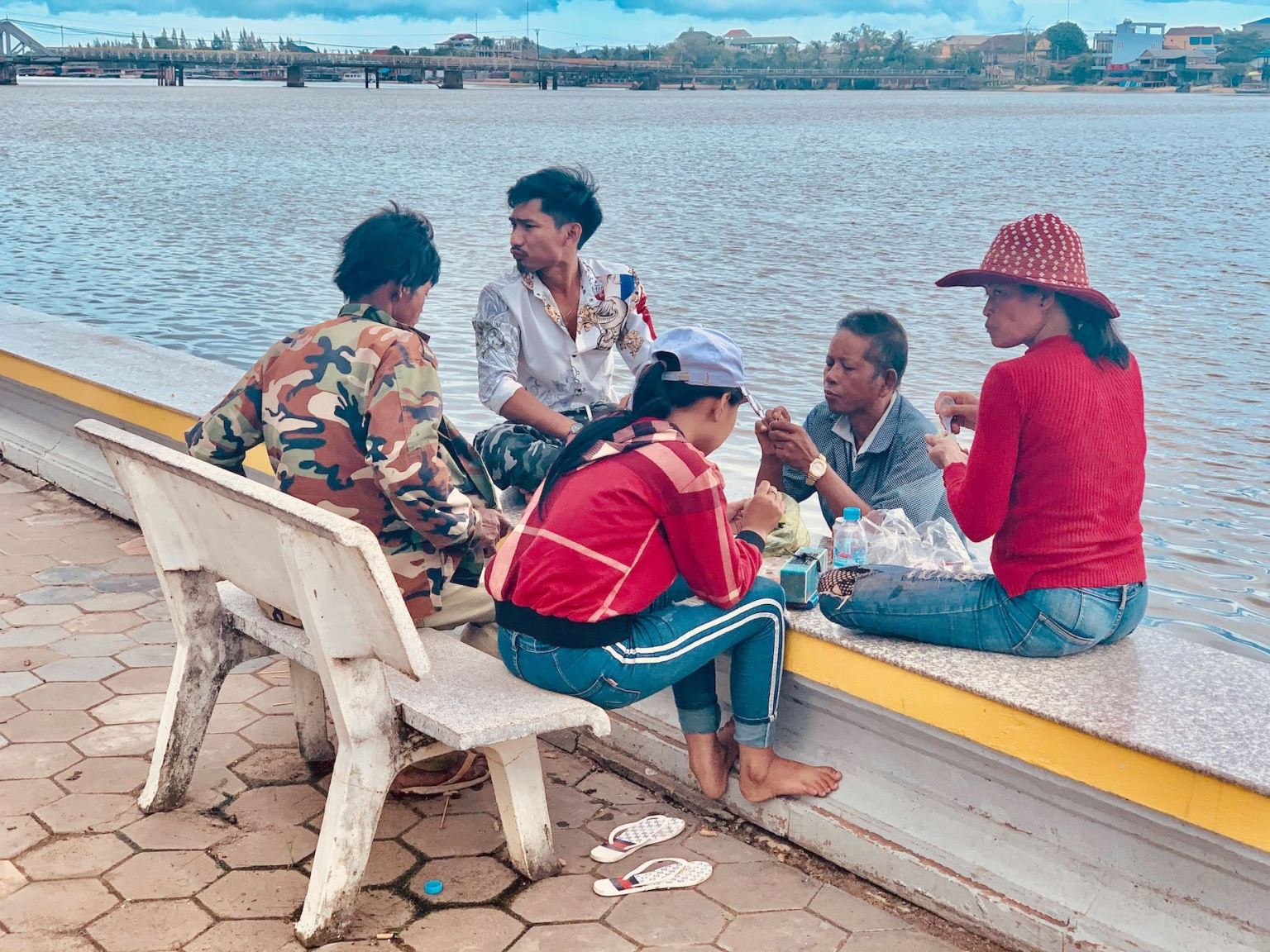 Lunch by the river. 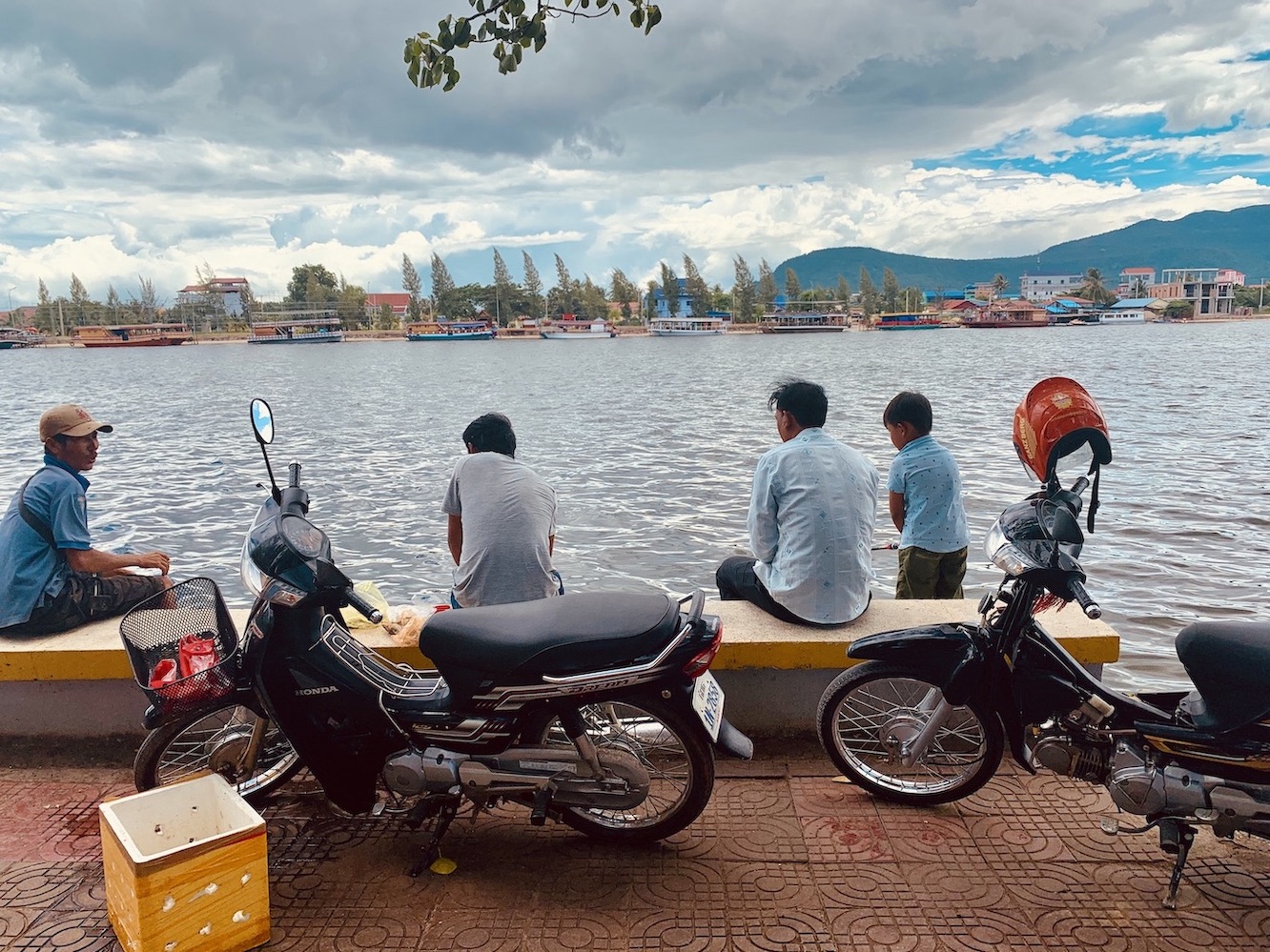 It’s also common to see a group of local men roll up on their motorbikes. Within a few minutes they’ve unpacked all their fishing gear, happily settled in for the afternoon. 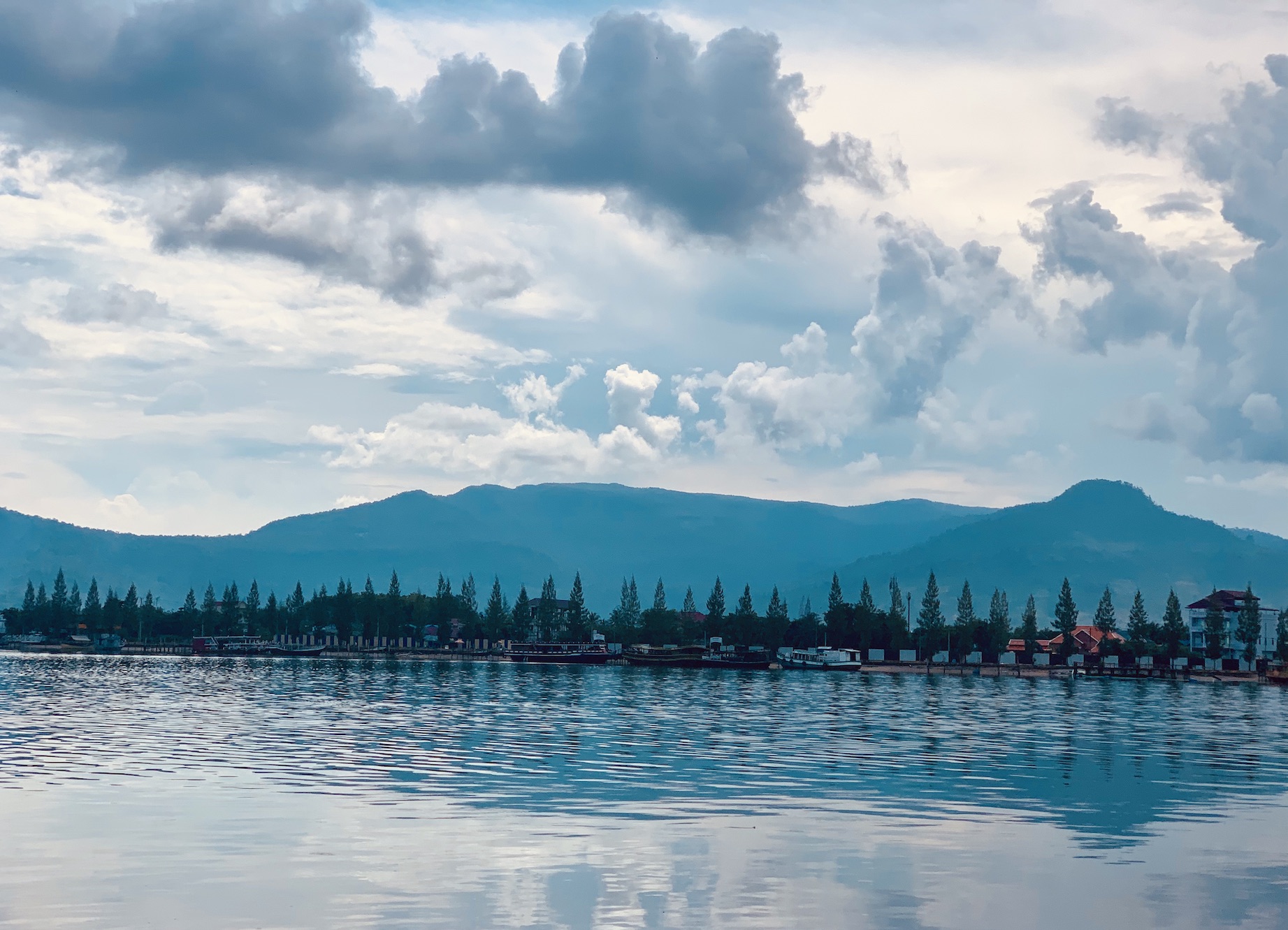 From dusk til dawn, no matter what the weather, Kampot’s river vista is nothing less than gorgeous. Beautifully framed by the rolling hills of Bokor National Park. 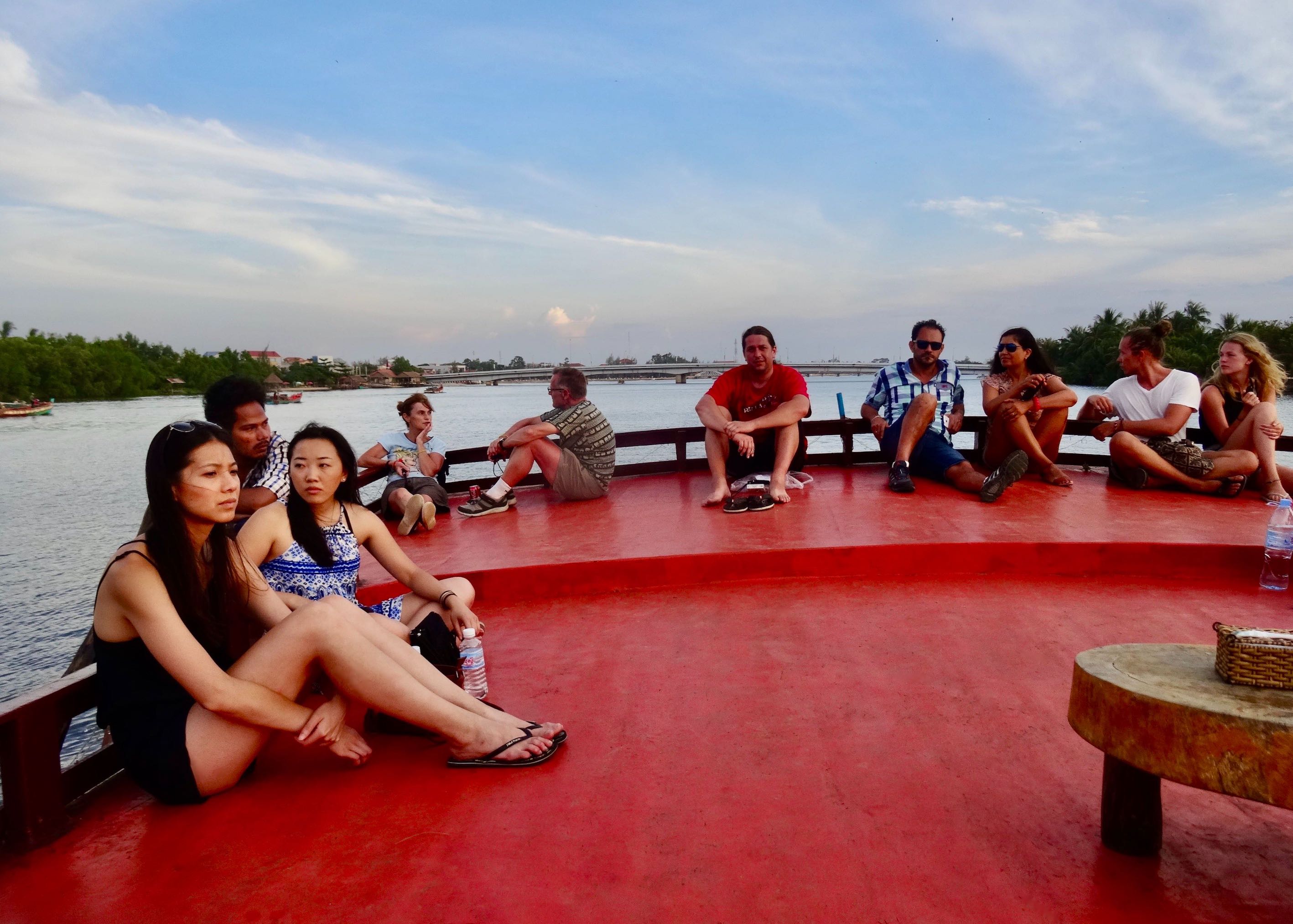 Back in 2015 Wonderboy and I took one of the many cruises that ran from the promenade. If memory serves me well, we jumped on The Firefly Cruise. Timed for sunset, this slow, lingering journey took us deep into the countryside along provincial villages and remote guesthouses. 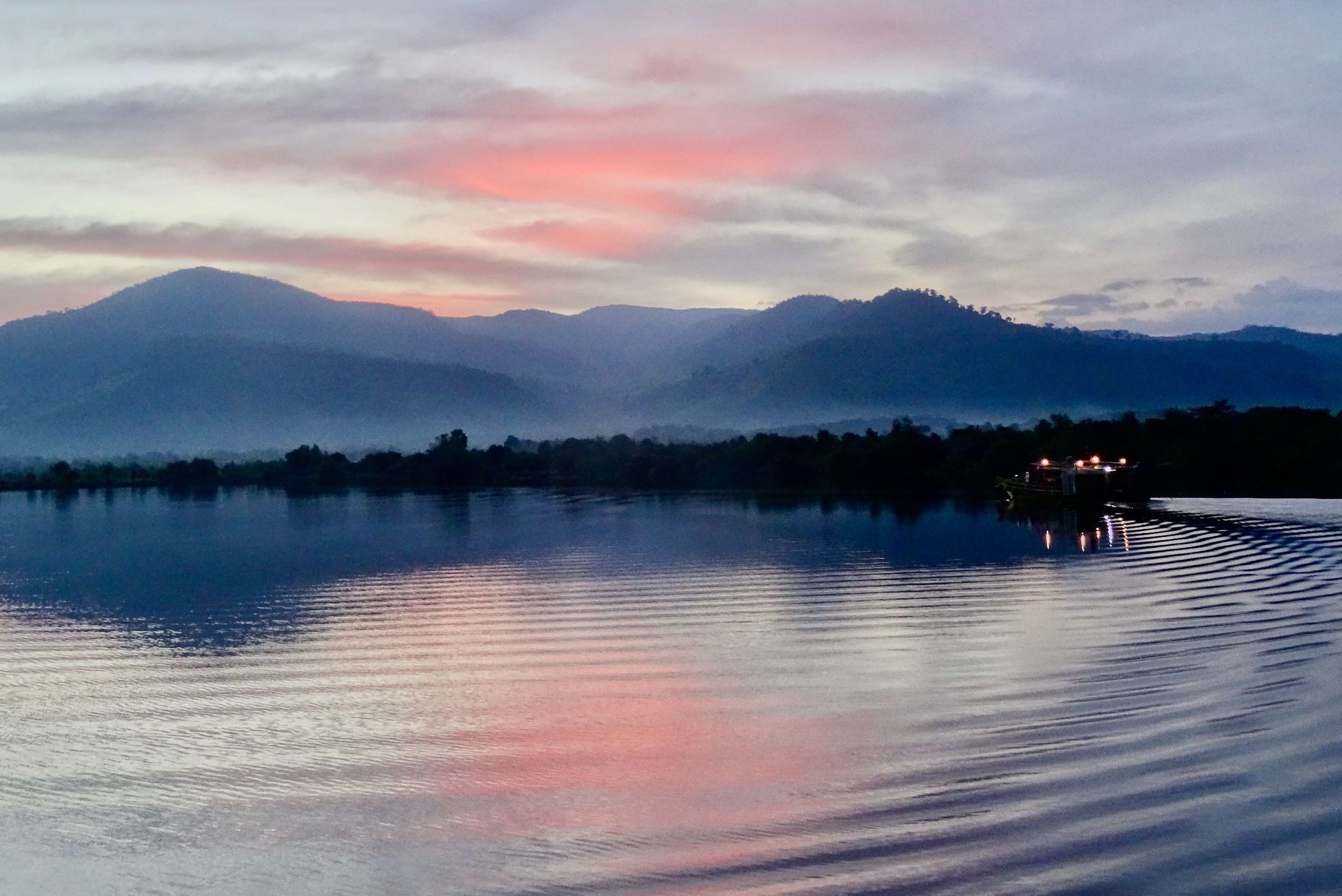 The colours were just extraordinary! And of course we got to see the fireflies themselves glowing away in trees and bushes. Fast forward to the summer of 2020 and nearly all the river cruises had been cancelled due to lack of demand.

Nevertheless, the river continues to come alive in the early evening. Around sunset, you can watch all the fishing boats heading out to sea for the nightly catch. It’s a lovely sight, the gentle hum of engines proving strangely hypnotic.

There are a number of cafes and bars overlooking Praek Tuek Chhu. Kampot Ice Cream Palace is a great little bakery-restaurant with an outdoor seating area. They do traditional Khmer dishes, western breakfasts and an awesome selection of cakes and cookies. Especially the lemon meringue pie. More on these guys in a later post. 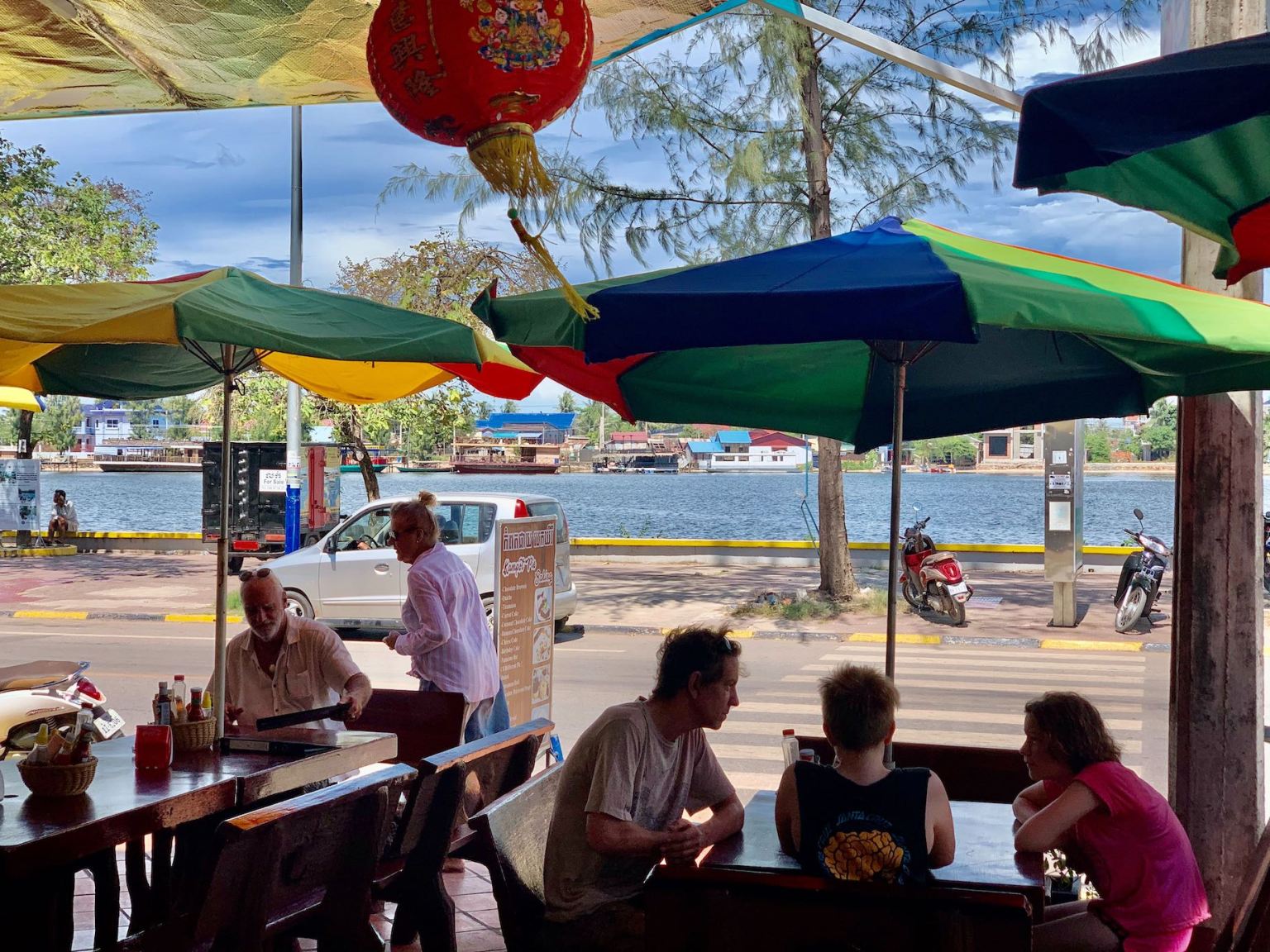 Moreover, a number of fancy hotels have rooms overlooking the river. On the eastern side, Rikitikitavi has a wonderful river panoramic from its treehouse restaurant.

On the western side, it’s impossible to miss the giant Kampot View Boutique Hotel. Pictured below on a deliciously overcast day, seemingly under attack from an absolute beast of a cloud. 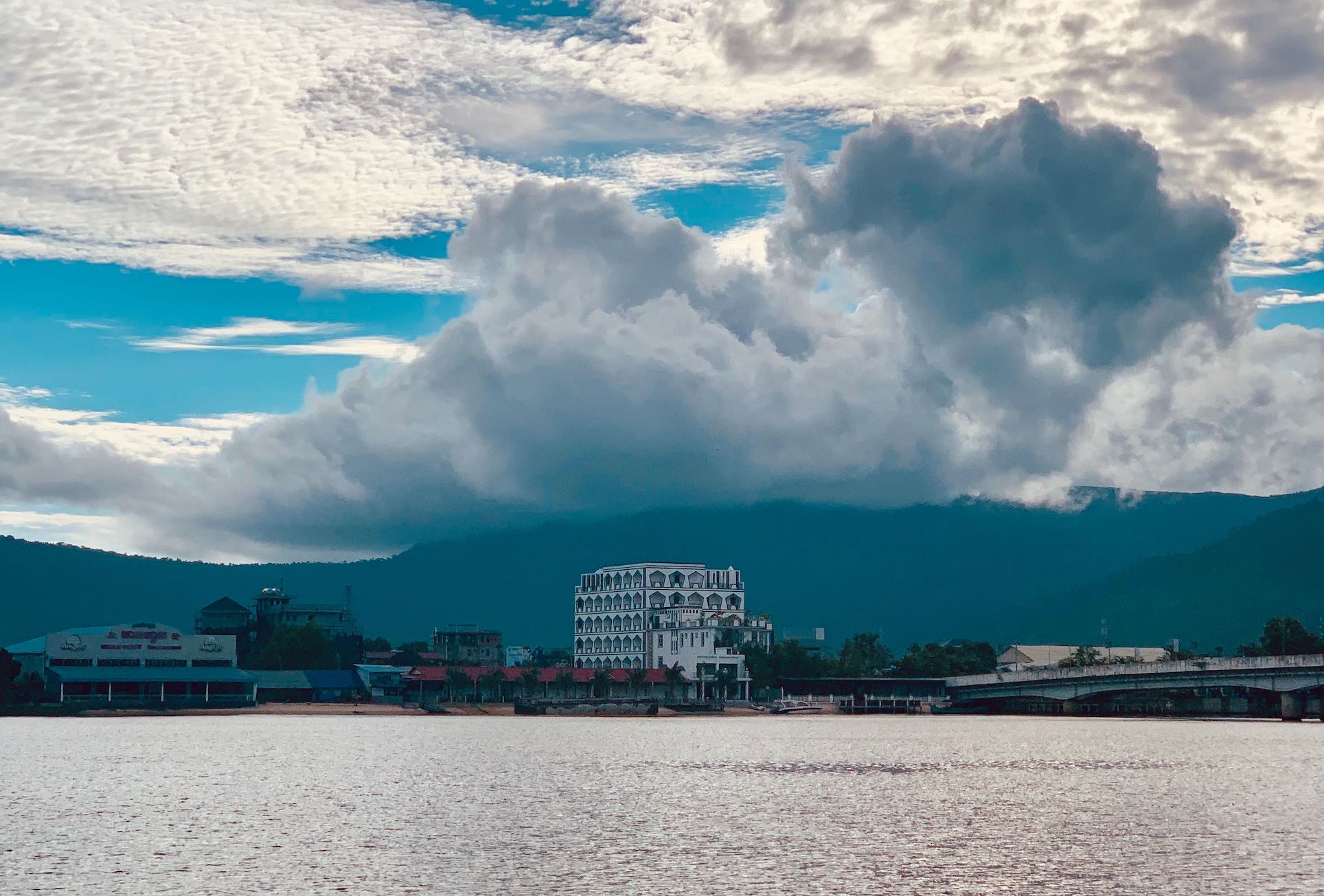 One afternoon, while out jogging, I decided to go and have a look. The bored receptionist was more than happy to arrange for someone to show me one of their double suites. Right enough, there was an excellent balcony view. As there should be for the kind of rates they quoted me! 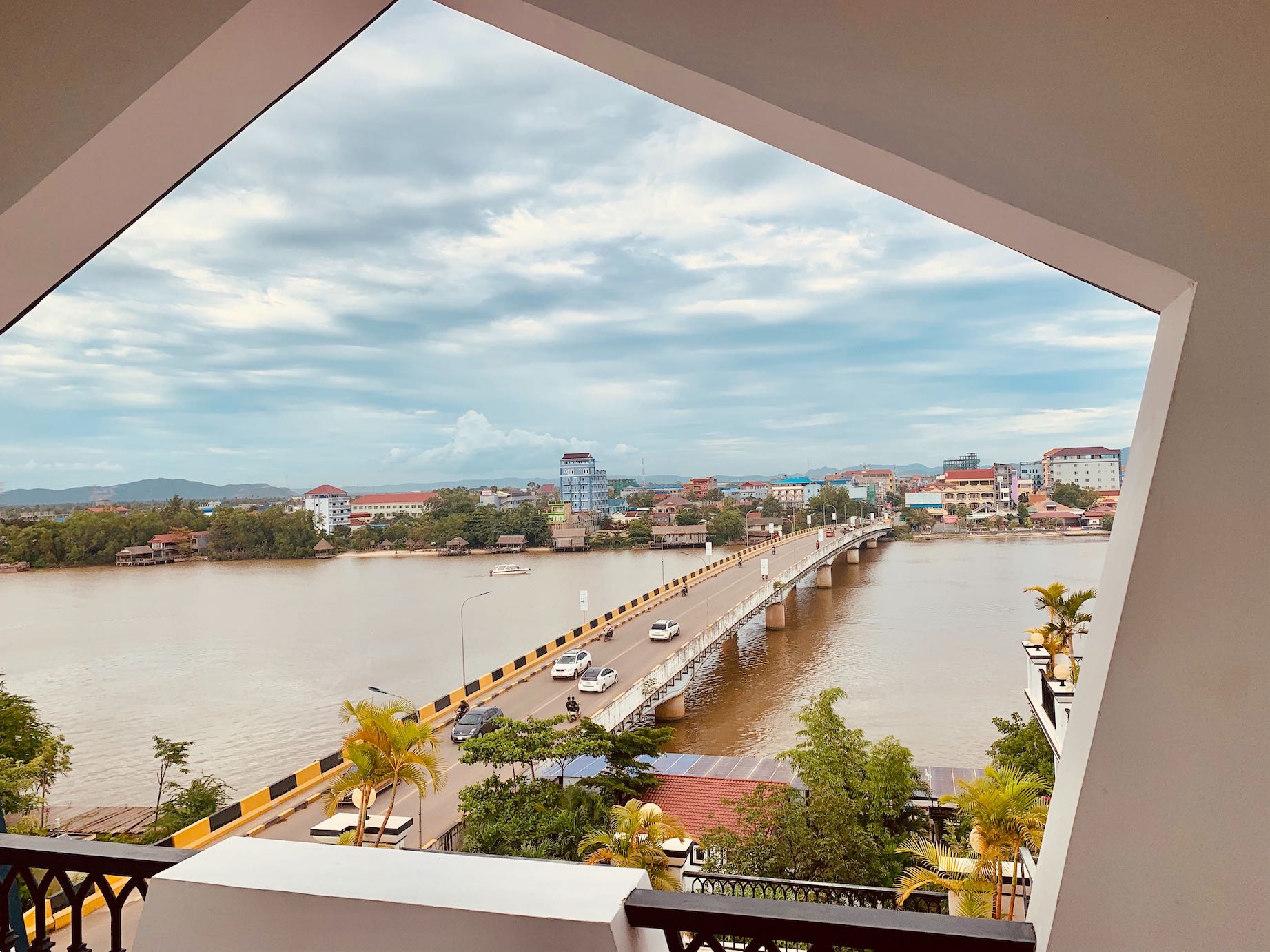 There are several notable bridges spanning the Praek Tuek Chhu River. Of these, the most iconic is The Old French Bridge (Entanou Bridge) pictured below. Built in the 1920s, it was once a grand old structure with impressive steel arches. 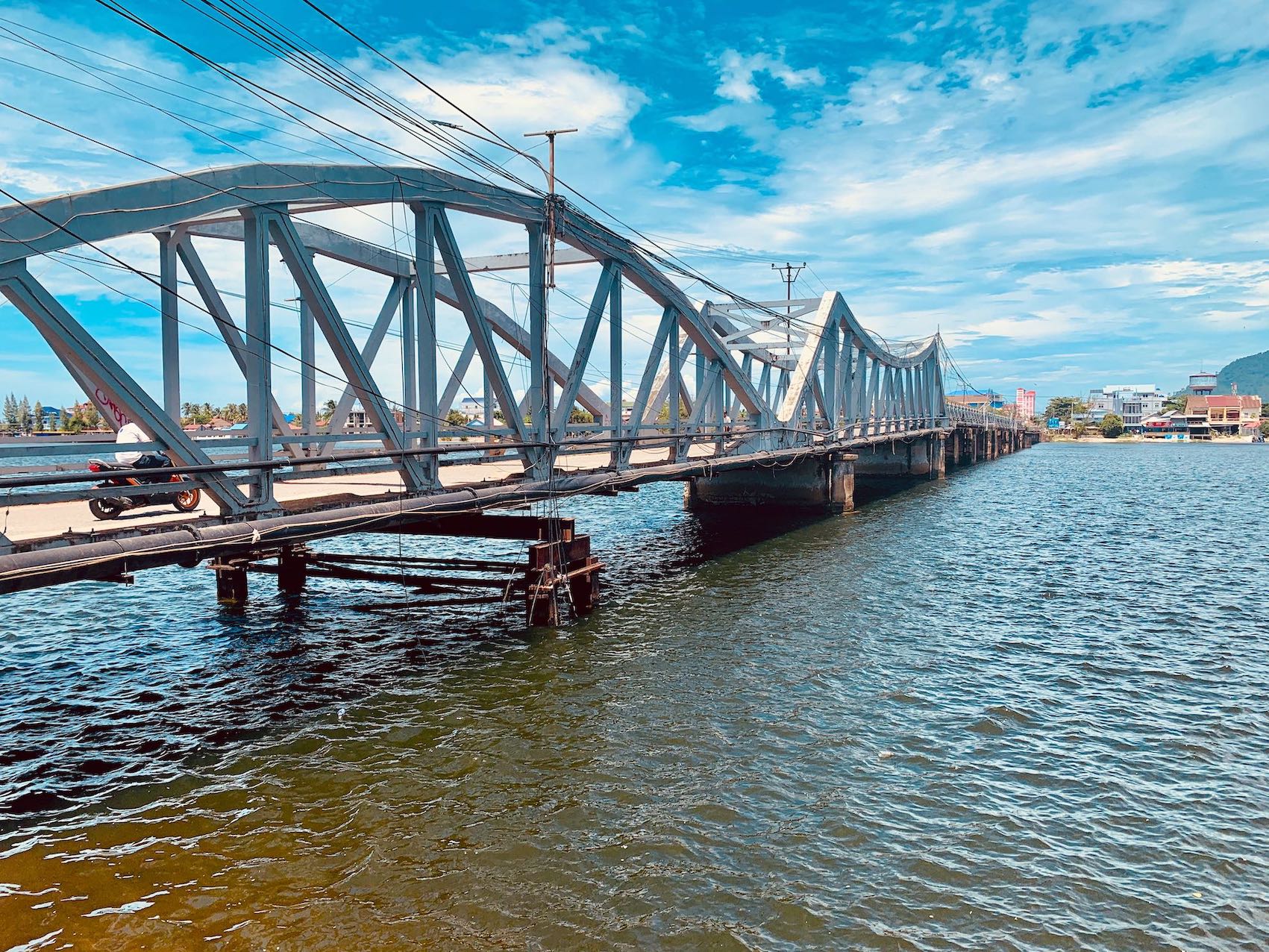 But of course The Khmer Rouge destroyed it during their campaign of hate in the mid 1970s. Later on, following a rebuilding project, the bridge got smashed up again by the invading Vietnamese in 1979.

While nowhere near its former glory, today’s bridge has a certain charm, thanks to its clumsy mishmash of materials. Furthermore, it’s fun (albeit a bit hairy) to cross on foot, as motos and bicycles whizz past you. Quite literally brushing the hairs on your arms as they go. 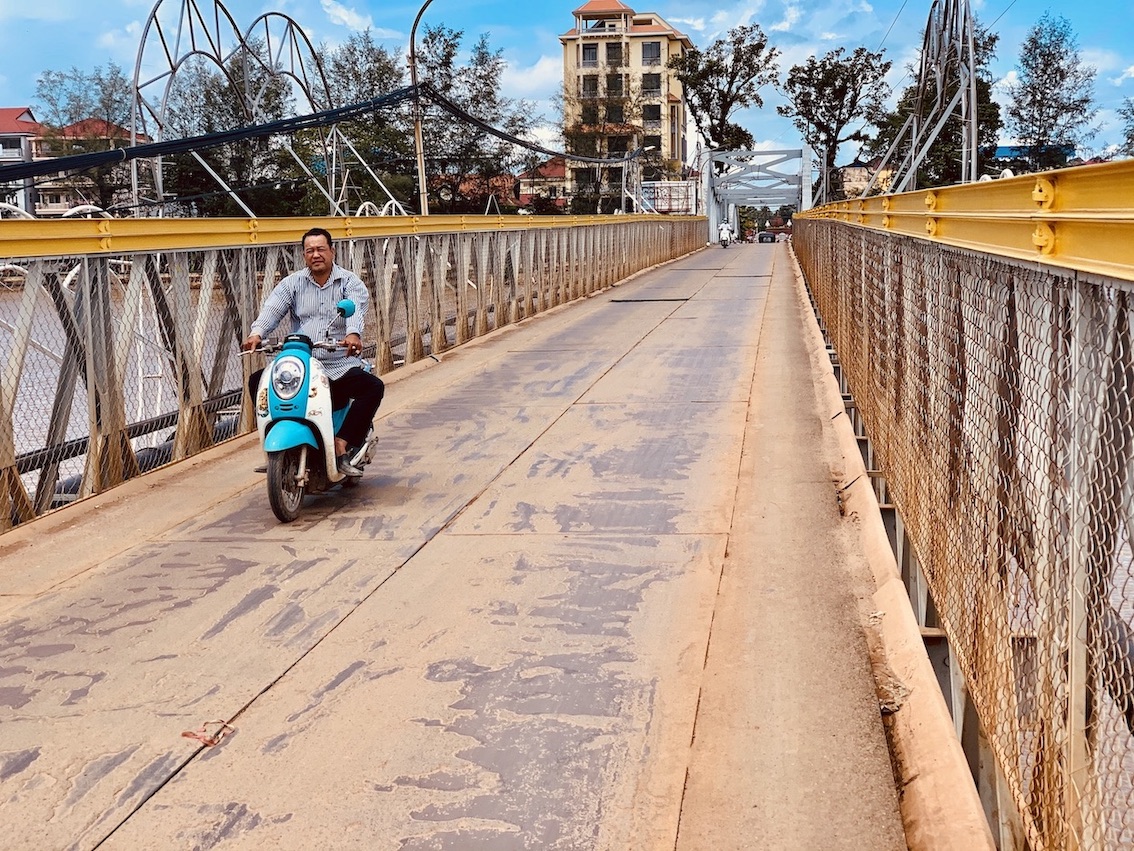 Pylons at either end stop cars and tuk tuks from entering. They have to take The New Bridge, seen in the earlier photo from Kampot View Boutique Hotel.

Further upstream, and something of a hidden secret to the casual traveller, is the immensely fascinating Old Railway Bridge. Straddling a fine section of the river, this imposing 1920s structure makes for a wonderful stroll. 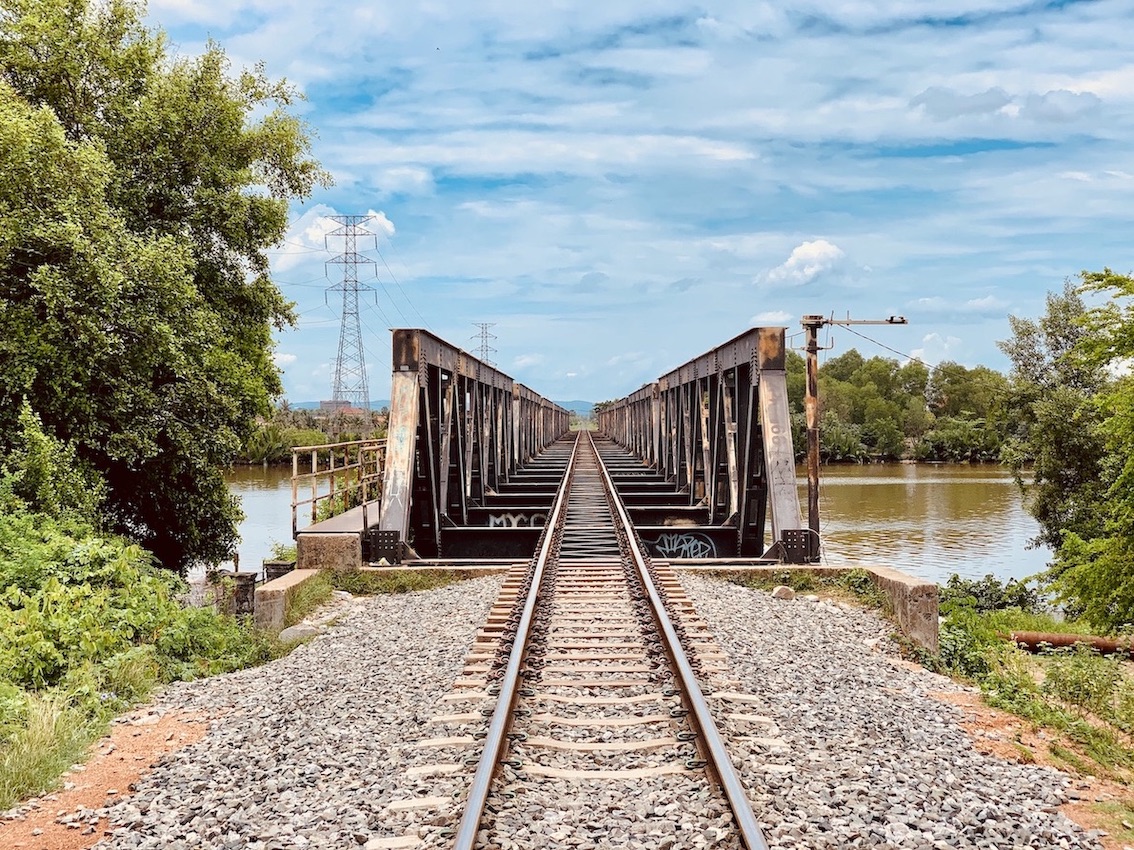 Sladja and I crossed it one burning hot afternoon in the hopes of seeing a train rattle by. Unfortunately, (for me at least), our luck wasn’t in. But it was still a thrill to walk onto the bridge via a gravelly stretch of open track. 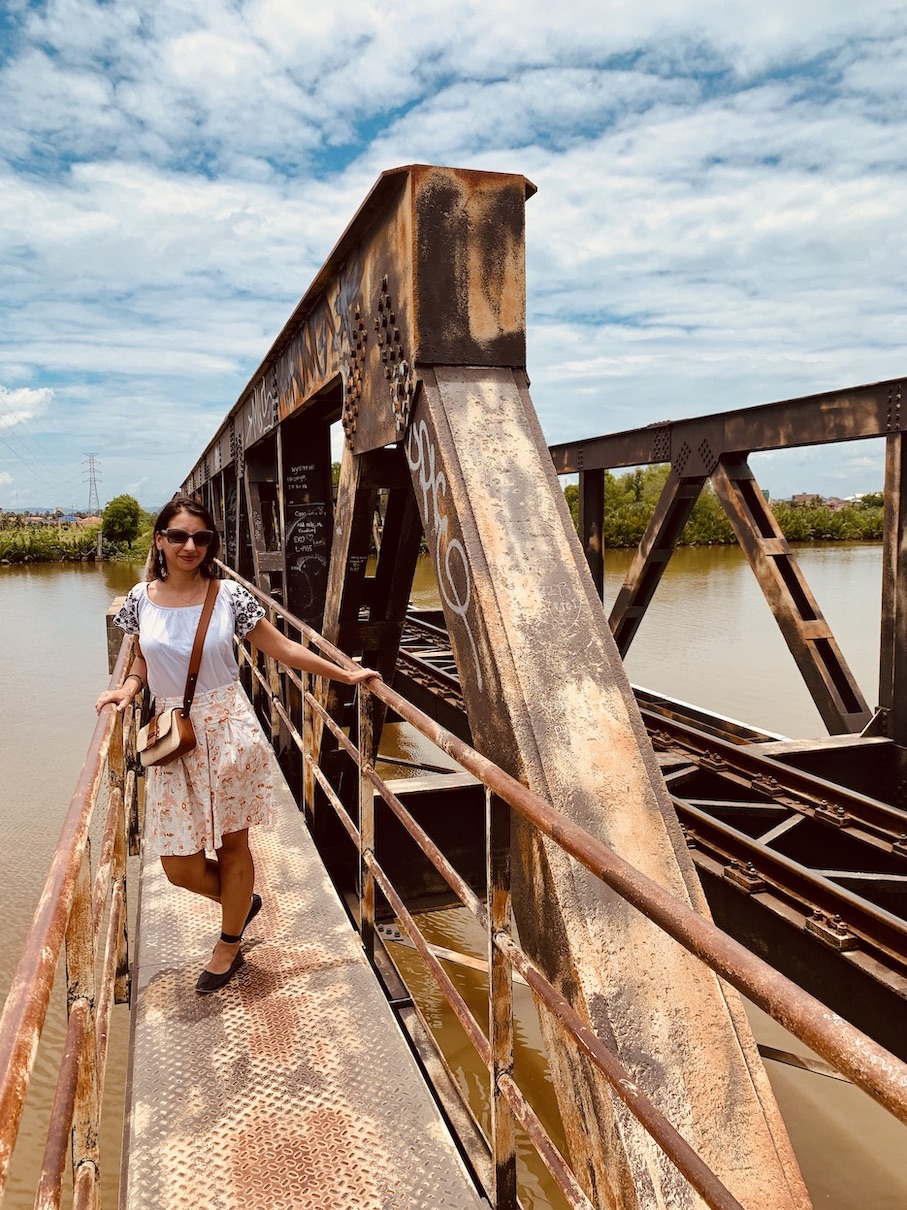 There’s a staggering lack of information online about the bridge. Hence we had to make do with simply drinking in the river views and reading all the bits of graffiti. Not the ideal place to go, perhaps, if one is feeling depressed. I do hope he/she made it to the other side. 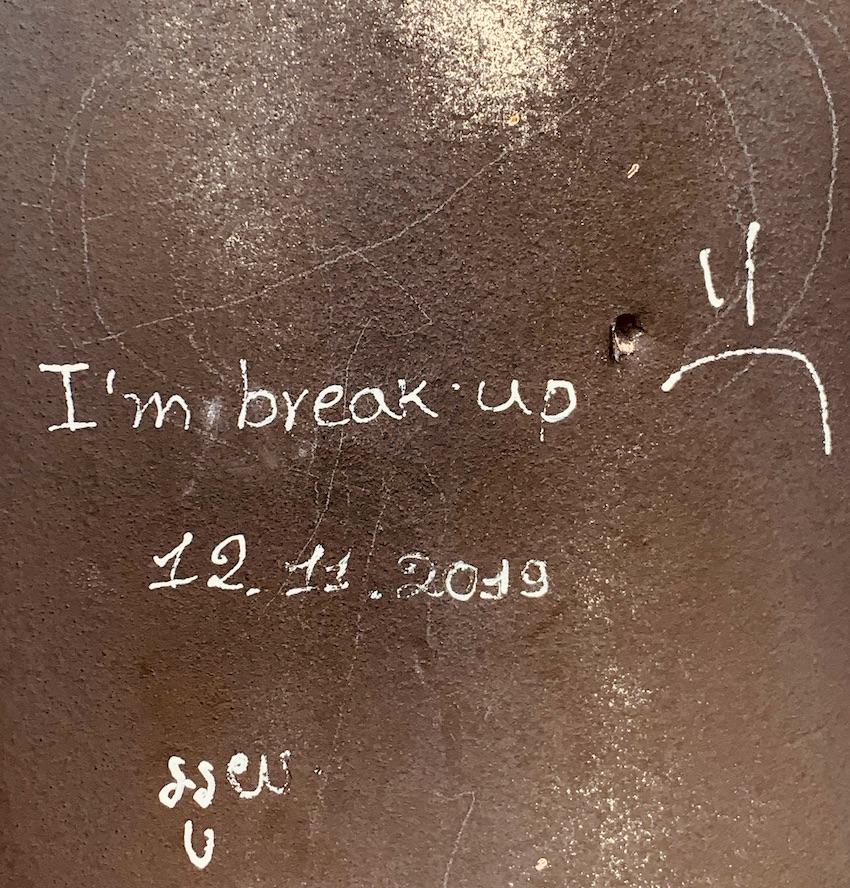 The Praek Tuek Chhu River flows for just over 21 kilometres from downtown Kampot, culminating in the large Kamchay Hydropower Dam. The further you follow the river out of town, the more majestic it becomes. One of the most picturesque sections can be viewed from Nibi Spa, already reviewed on these pages. 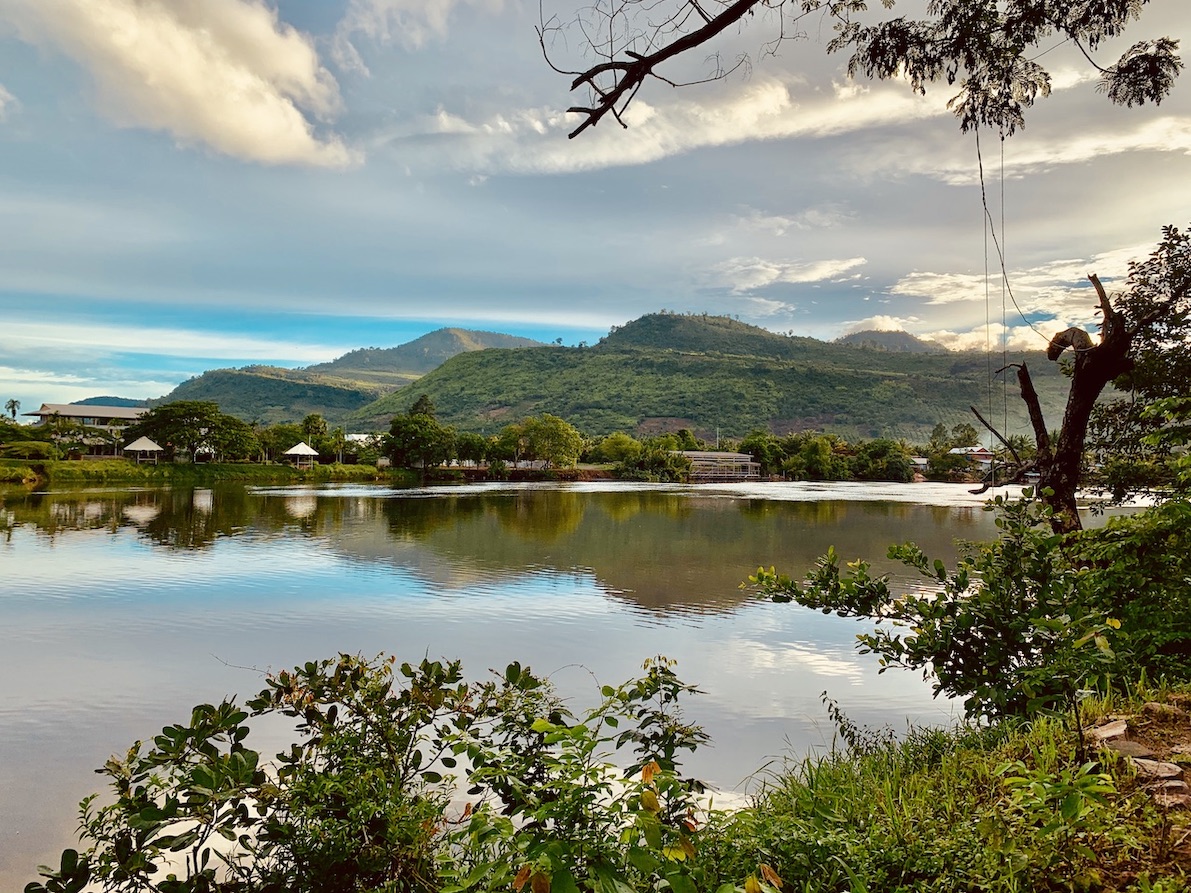 The Kampot River from Nibi Spa.

Just across from Nibi, there’s the excellent Greenhouse Bungalows. The huts are very simple, but do at least have a modern toilet. Best of all, each bungalow comes with a wooden porch, where you can watch the world go by from a chair or hammock.

Even if you don’t stay overnight, Greenhouse is one of the province’s best lunch spots. More on that in my roundup of Cool Spots Around Kampot. 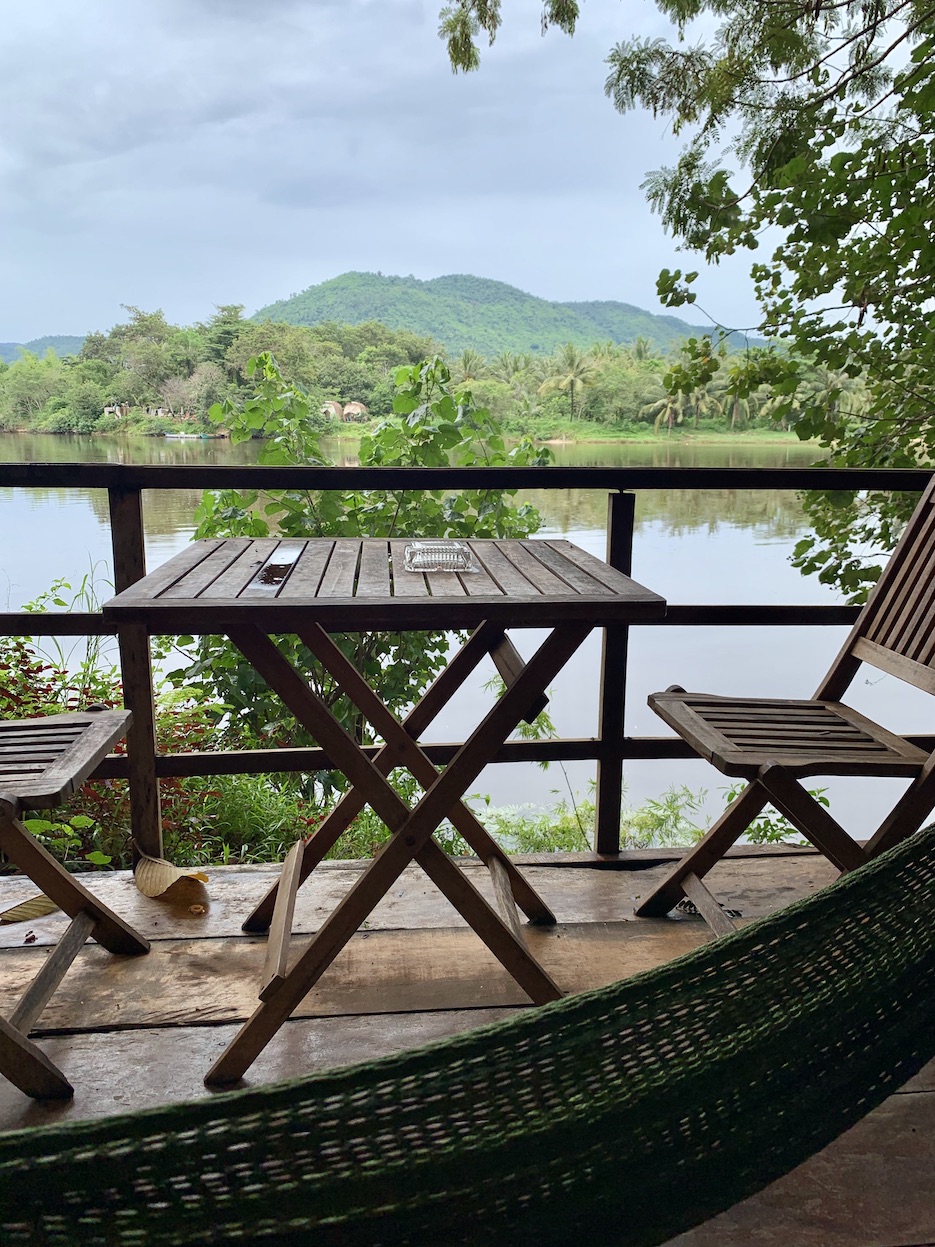 Finally, some say the ultimate Kampot River experience is a morning kayaking through the so-called Green Cathedral. This section follows a curve in the river, creating what feels like a series of thick jungle tunnels. Nearly all nearby guesthouses rent out kayaks and safety gear for a small fee. 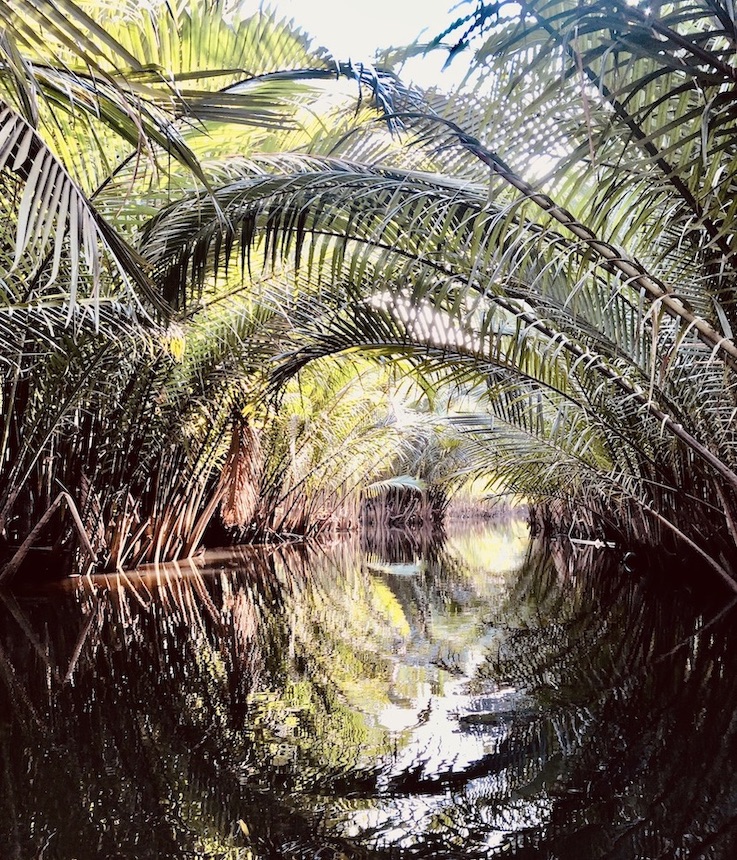